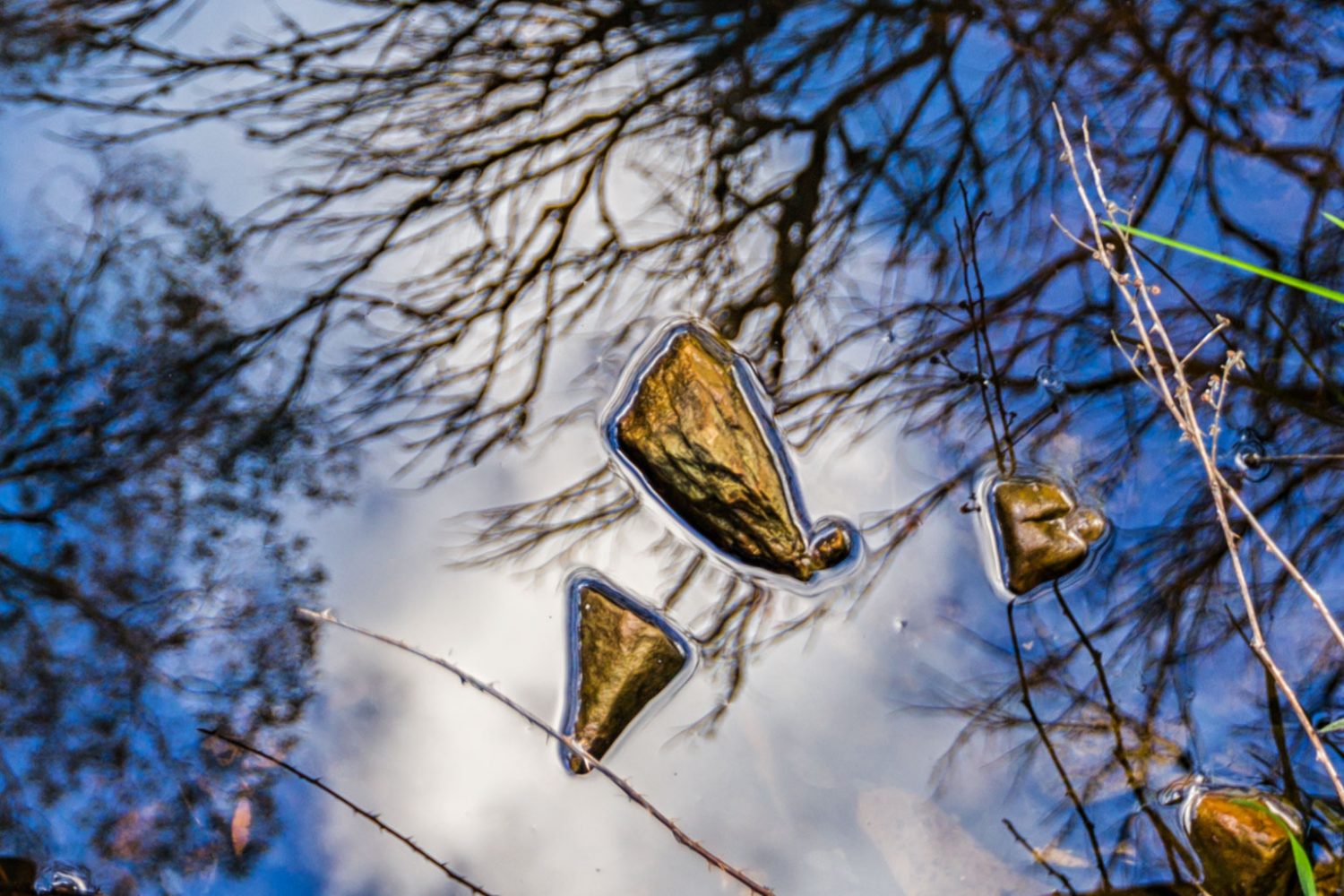 I’ll warn you now. What follows is a mixed bag, due to all sorts of reasons. You might think it’s all beer and skittles over at Fiasco Mission Control. You’re probably imagining me on a daily basis, eating grapes with an automated banana leaf fanning me, whilst languidly lolling about in my best fishnet singlet and leather shorts. Alas, life could never be that good.

In my blogging comeback, I had a half-baked plan, for no apparent reason, to try and do a post a week. After a month, I’ve suddenly realised this idea is completely bonkers. Firstly, depression can sneak up at the best of times, no matter how tight my shorts are. I’m not talking about the ups and downs of life. This is something a lot more sinister, as it follows me around like a shadow and without fail, it eventually latches on. It’s like an inky darkness which penetrates the body and seeps deep into my bones. There it’ll remain, leaving me inert for a time, before it detaches itself. It never vanishes though and remains at arm lengths until next time.

In the end, I’ve decided to just post when I feel up to it. You might get one a week or it could be monthly, but I will return at some point. If you’re not happy with that system, well… I can only refer you to Sam Spade. 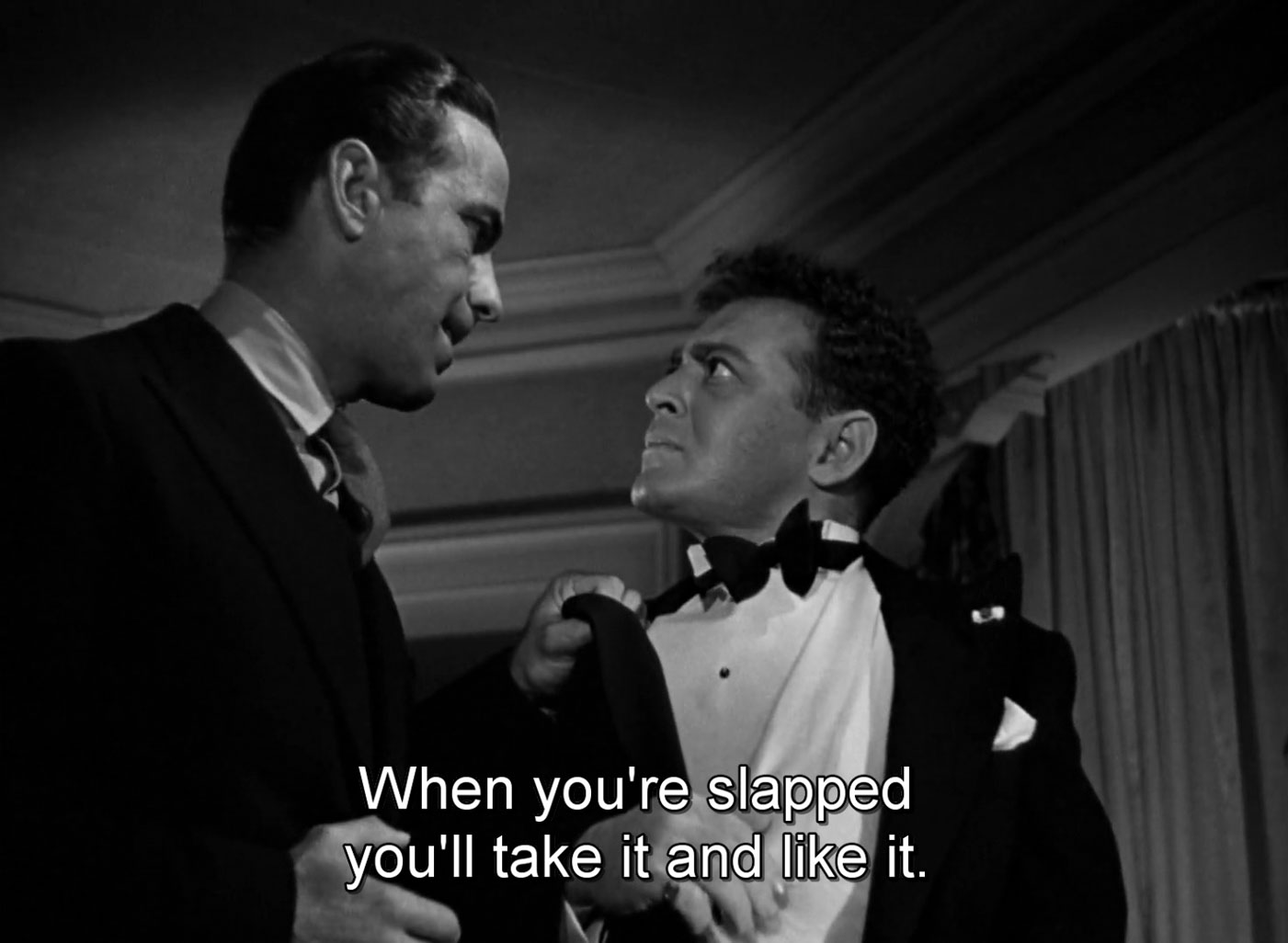 Now, another reason for my slow blogging production is the ongoing house tinkering. I know you’re all being kept in suspenders, as you eagerly await my housing updates. By the way, this constant harping about all things not walking related isn’t my fault. It came about because hardly any one read my ‘House Renovation 101‘ post. Due to lack of interest, my perverse mind decided, ‘Huh? They don’t like it? There’s only one solution. I’ll force-feed them constant updates!’

So, the latest is gutters have been done. Look, I’ll show you what I mean. There they are. 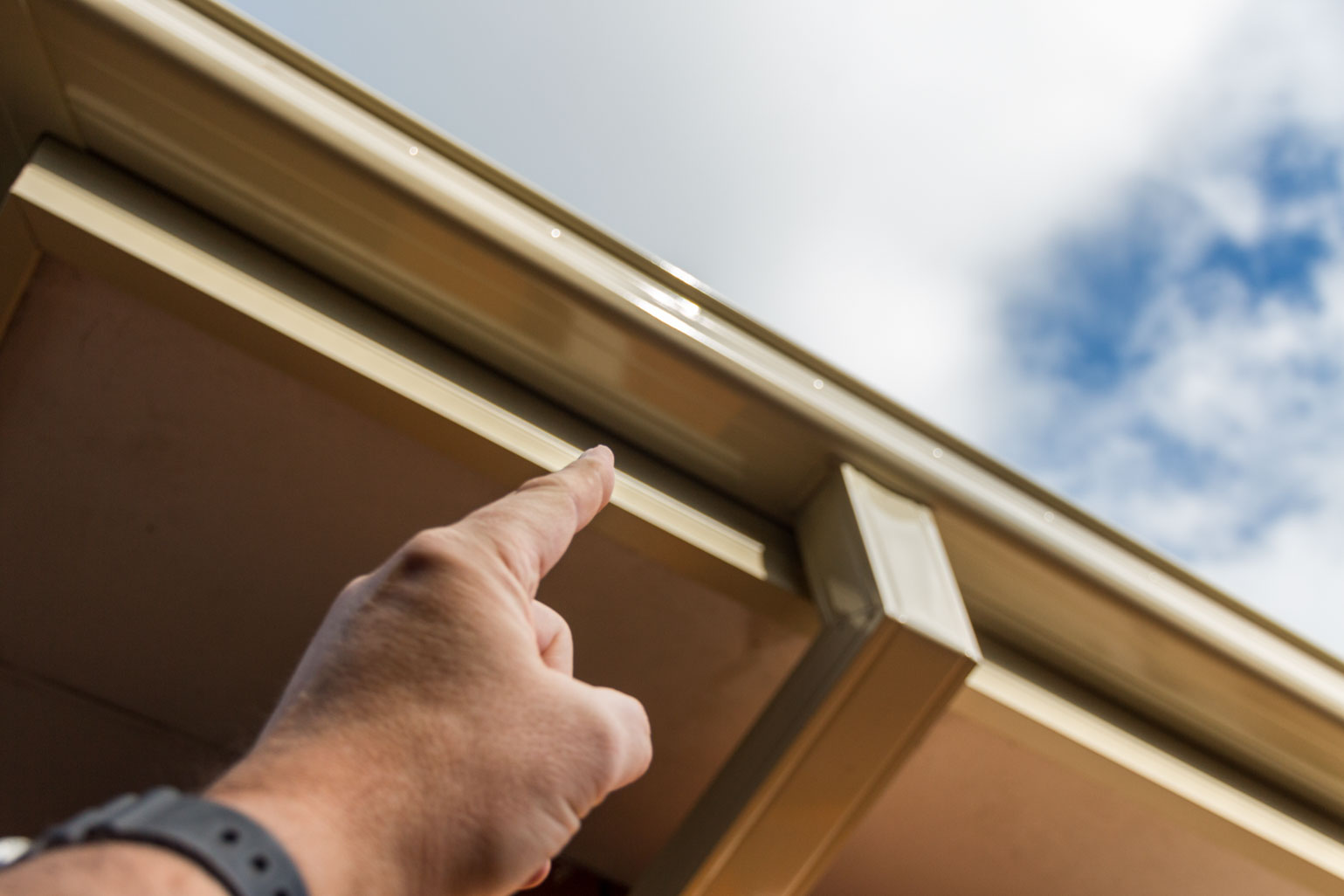 In the never ending, ‘dealing with the oddball tradesman’ scenario, the gutter man came through with some quality dialogue. Firstly, it wasn’t just one bloke. It was raining men (hallelujah) as about 500 turned up. Gutter man took me aside and said, “Okay, I’m putting in two teams who will commit to tackling this in one day. If we apply ourselves, we should be successful”.

Okay then. Teams? Commit? Tackle? Apply? What is this? The raid on Bin Laden? Anyway, I must admit, they did commit themselves and were done in record time. The only problem is it doesn’t rain out west and I’m eagerly awaiting some decent precipitation to see if they work.

Gutters are done. What next? Oh, I had to get new a fence. Look, there it is. 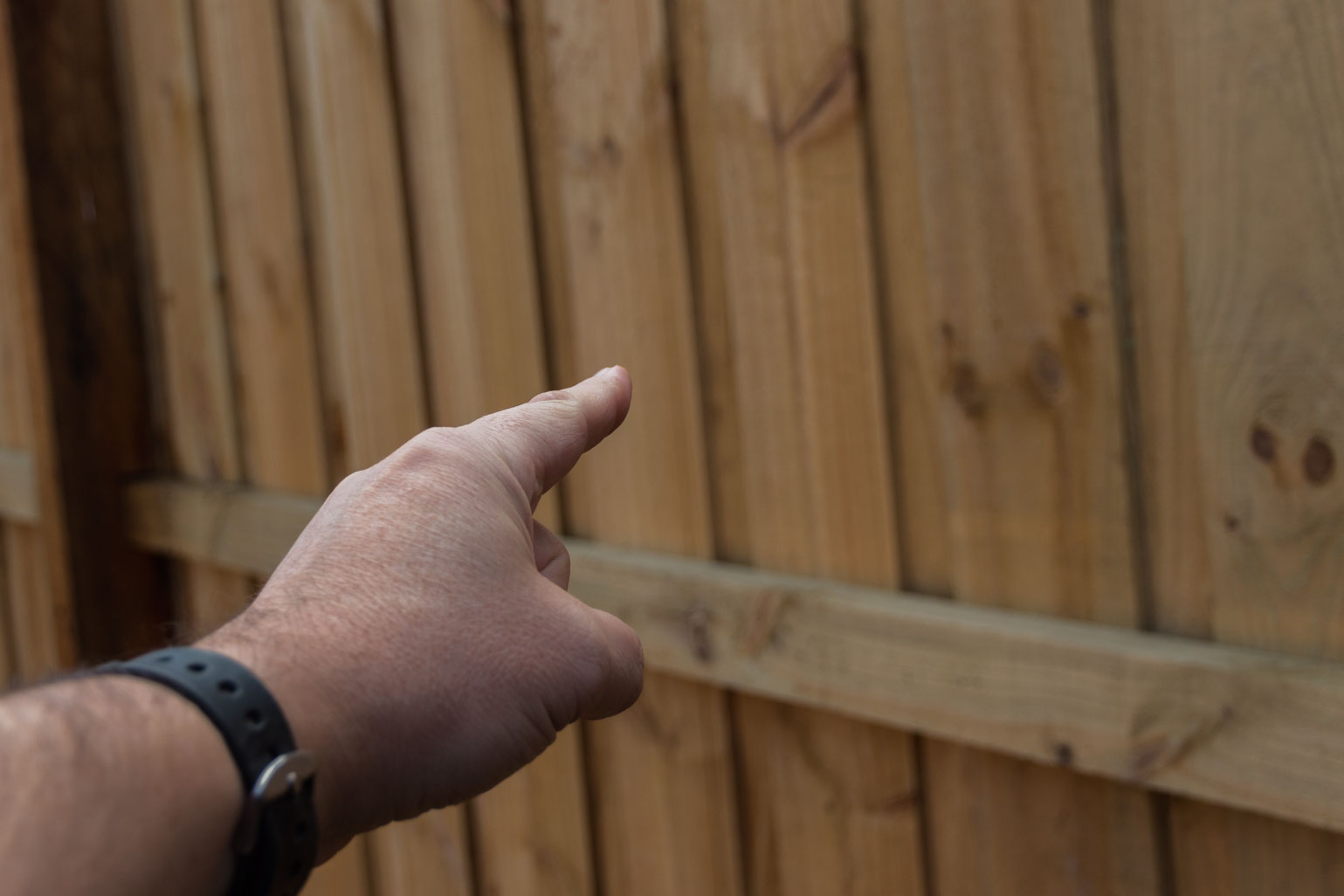 Okay, enough of that. What about the walk? I contemplated a well known wander, but instead, decided to pluck out something obscure. It’s another one where I found its photos buried on an external hard drive. On paper it sounded great. Notes told me of this wander from Hepburn Mineral Springs, which is a place of colourful vegetation in autumn, before heading to not one, but two mineral springs, a lookout tower and a dam, before returning to the start. It did sound promising, but in reality it didn’t have the grandeur I thought it would.

In fact, the overriding theme is rubbish. Literally. I may try and take pretty pictures, but on my walks I also document crap. It’s just you don’t see those images. Not this time though. Why not highlight some of the refuse, which exists on some of these strolls? Actually, this is my inland rubbish post and I’ve got a coastal one to come when I get around to it. Oh, in order to match the refuse theme, I’ve elected to write complete rubbish and pump this out in a few hours. You do realise the Tour de France is on, don’t you? I need this to be done by the evening.

Okay, here we go. Setting off on a balmy May day (last year of course) my first point of interest was Golden Spring, which is a natural spring that naturally, you’d find off Golden Spring Avenue. Was that the worst sentence you’ve ever read? 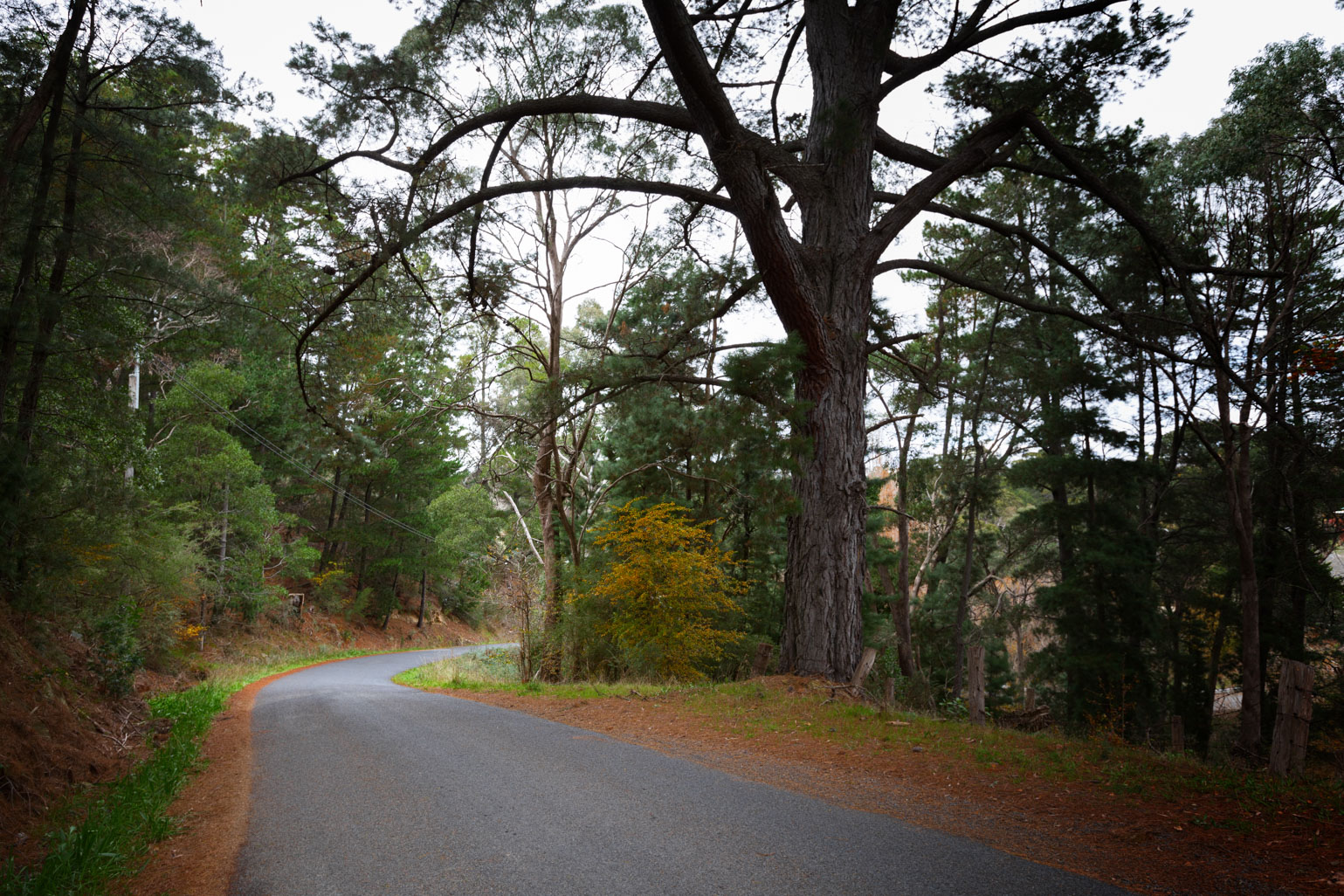 After a quick diversion from the road, I eagerly raced to the spring, eager to sample its mineral-ness. Upon arrival though, there was a slight problem. 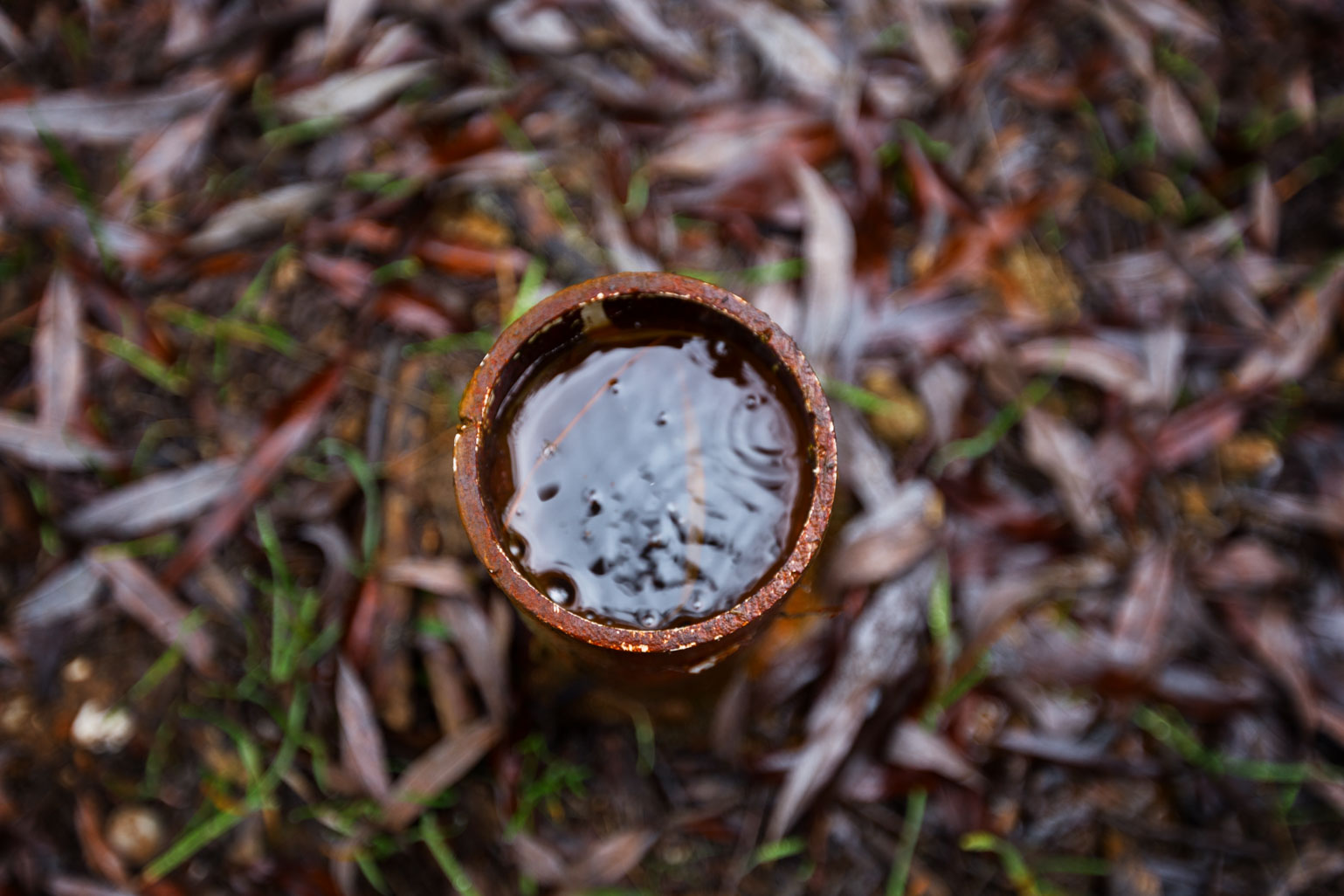 It appeared to be missing. I’ve no idea why, but the pump to the spring had gone and I assumed it had been decommissioned. Is that what you call it? As the photo shows, water was still bubbling up the old pipe, so in theory, I could have got down on my knees, wrapped my lips around the rusting metal tube and like a human hoover, sucked up the water. Regarding the last sentence, may I draw your attention to the most pertinent part? The ‘in theory’ bit? If anyone was passing by and saw some oversized bloke on his knees, looking like he was polishing the Johnson of a metal pipe, then there’s every chance the police would be called. Oh, another reason it wouldn’t happen is I’ve got dodgy knees, so I don’t bend them. In life, this causes all sorts of difficulty, especially when flying, but usually I’m lucky enough, as the cabin crew allow me to lie in the aisle. Sure, it’s annoying when the food trolley is pushed over my face, but it’s better than the pain from bending my knees.

Oh well, one can’t have it all, but there was another spring to attend later on, so it wasn’t all bad. Wandering off, I passed the first sign of random items along the walking track. Some blokes shirt. I’ve not sure how it would have got there? Was it actually connected to a body and I just didn’t investigate enough? 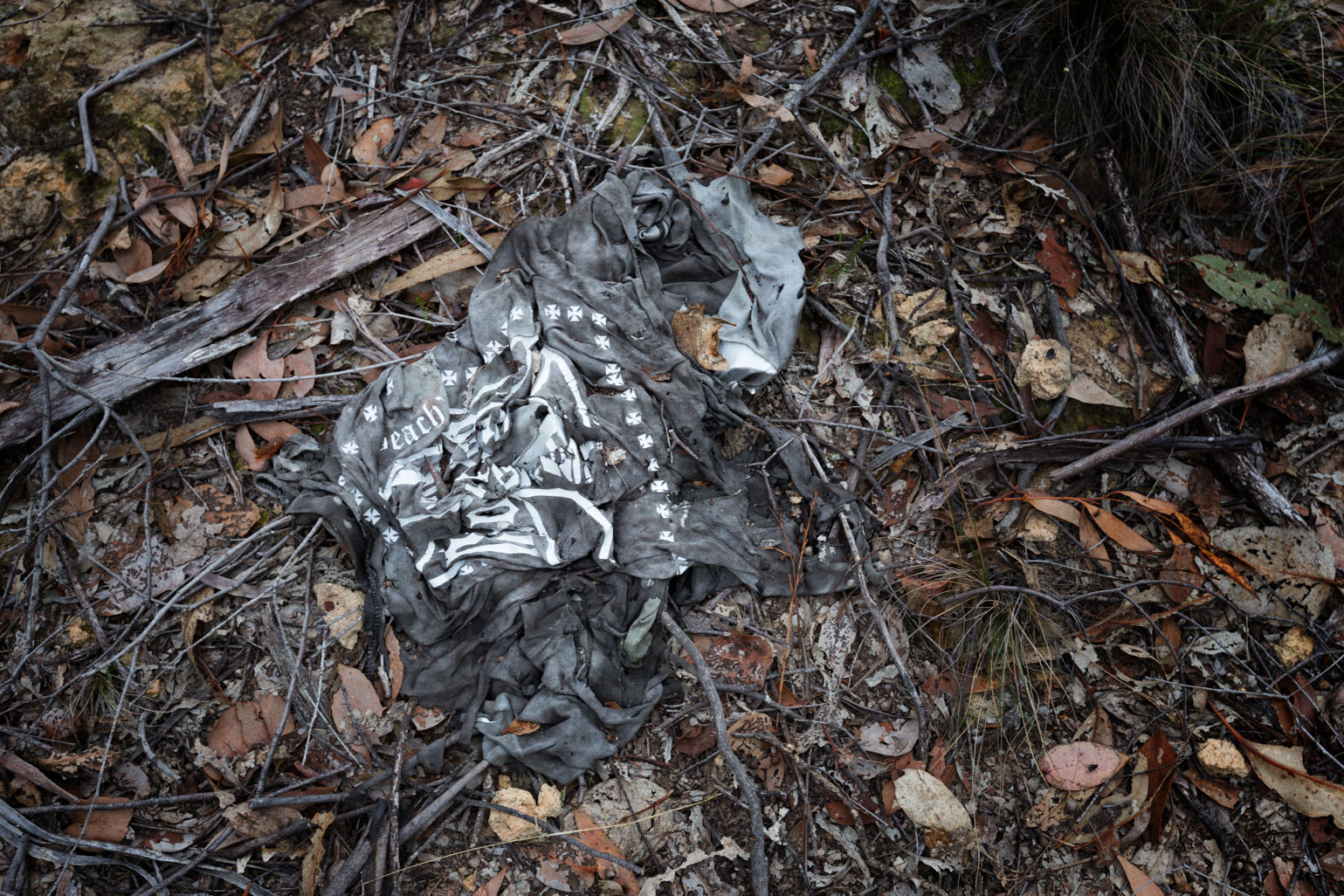 Who knows? I sometimes wonder how these things end up out bush. A bit like this thing. Is it really a key barrel? How does that get there? 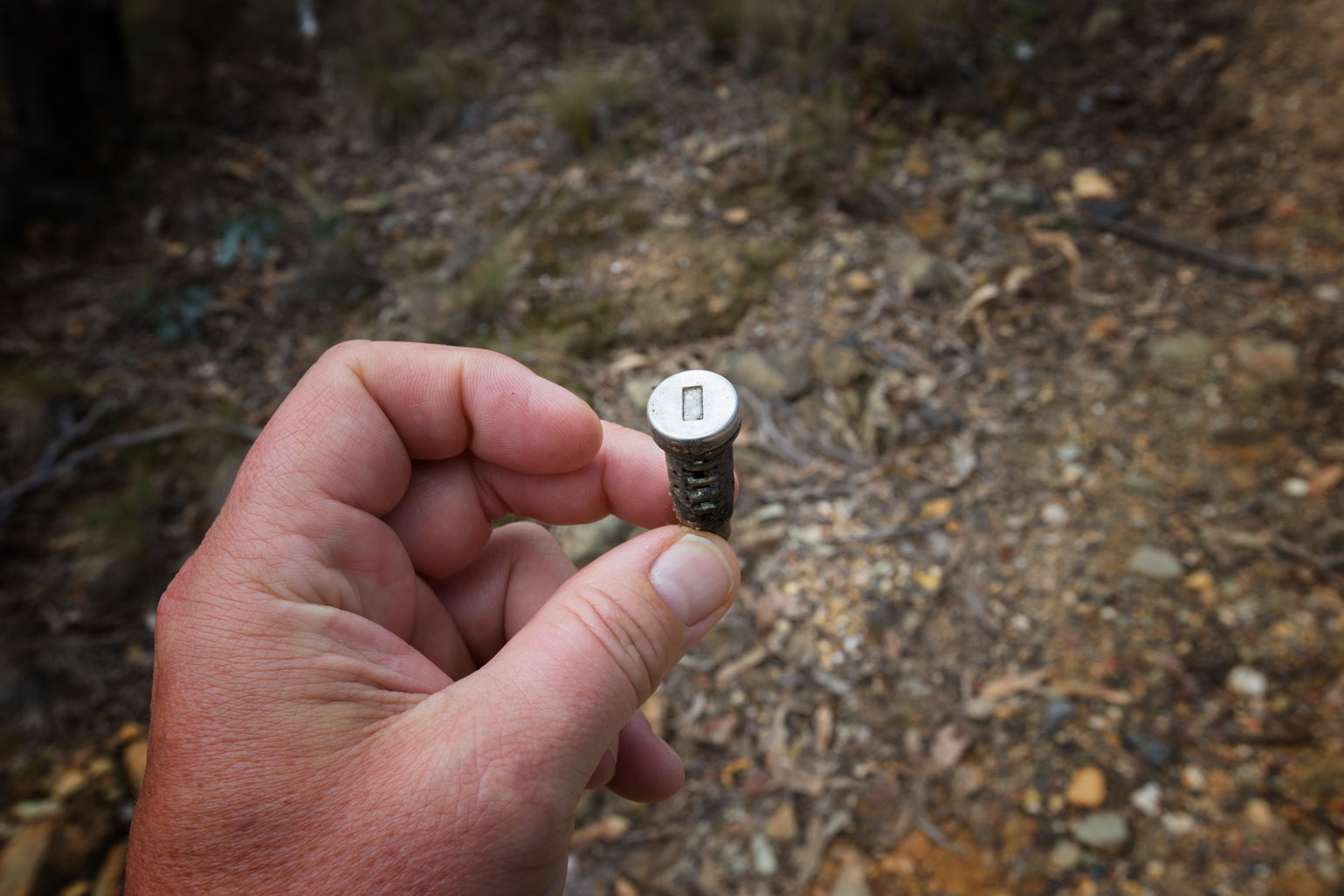 Mm… There wasn’t a lot of time to ponder though, as I made my way to Jacksons Lookout. I was a little sidetracked though, as the area around it was on fire. You think I’m joking, don’t you? 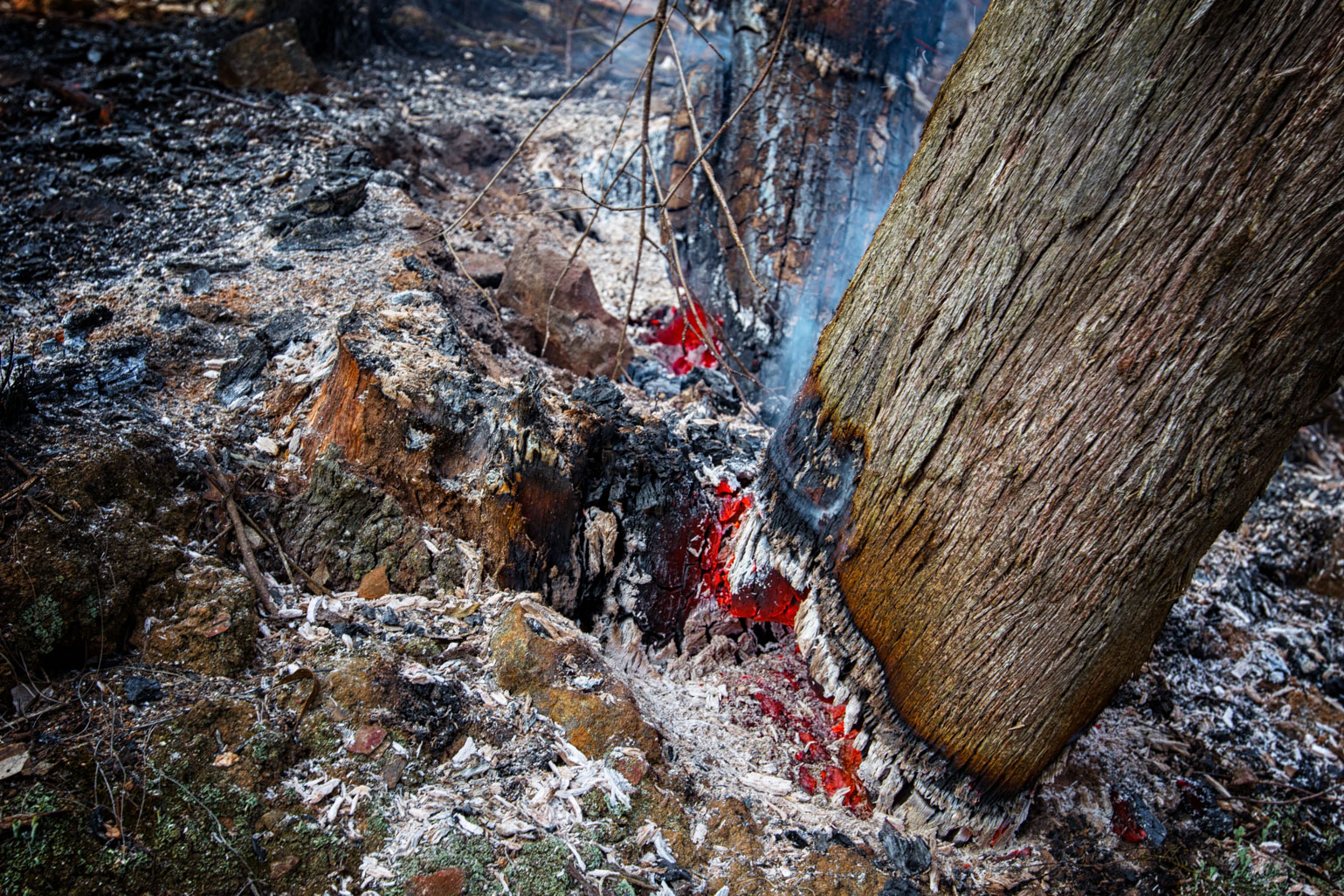 Ambling around the flames, I made it to the lookout and really, it’s a bit of a tired looking structure. Maybe it could do with a new paint job? Also, while they’re at it, maybe add another ten metres, as all the vegetation has grown and the view is a bit limited. I guess they could cut down all the trees within a kilometre radius of the tower to assist the view? The reward for my climb was an expansive view of the car park and I was a little surprised by the lack of circle-work on such a large piece of gravel. Disappointed almost. 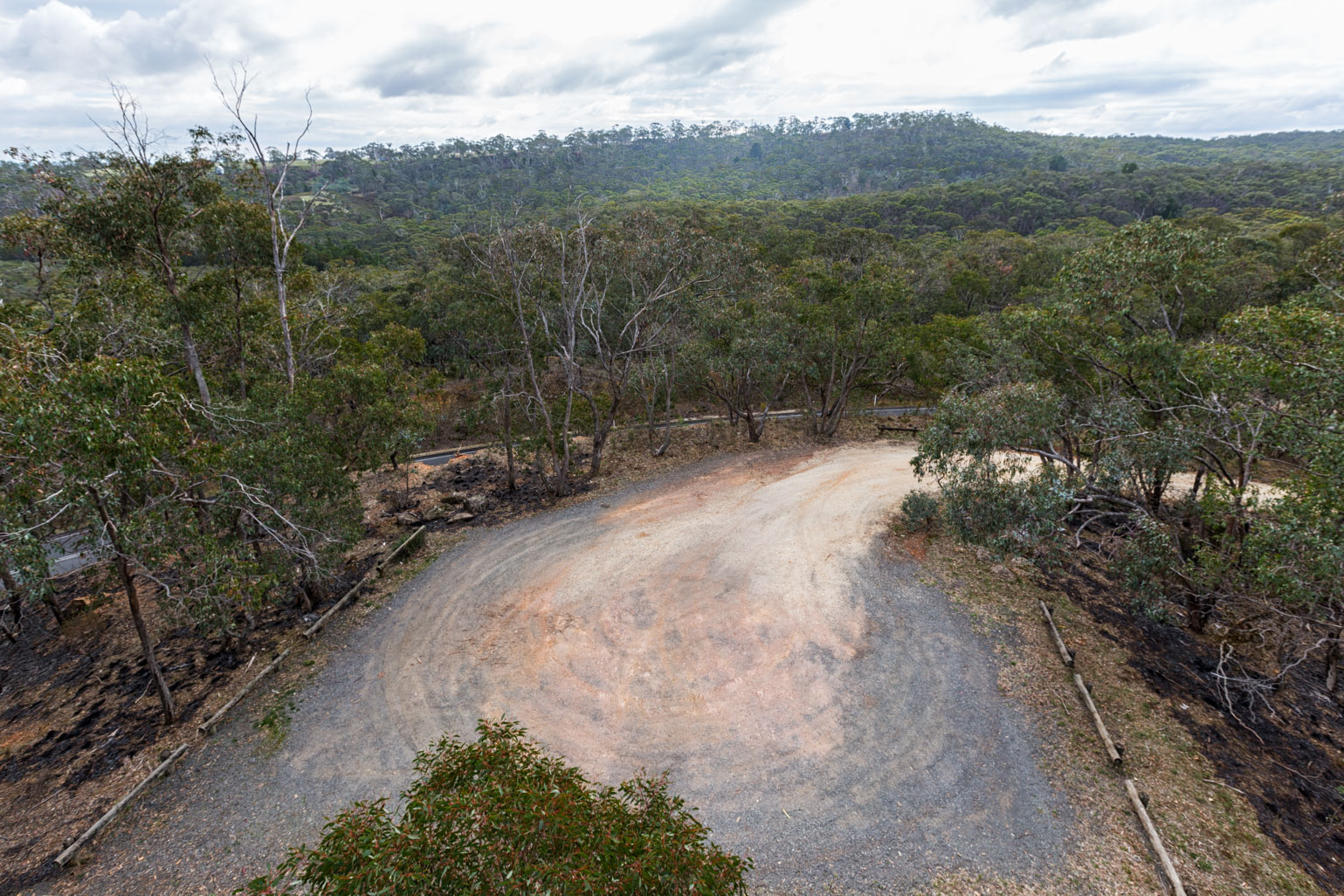 Descending the tower, it was time to go bush again. An overcast sky had sucked the life out of landscape photos, so I had to look for something else to interest me. This leaf, covered in water drops was a nice distraction. 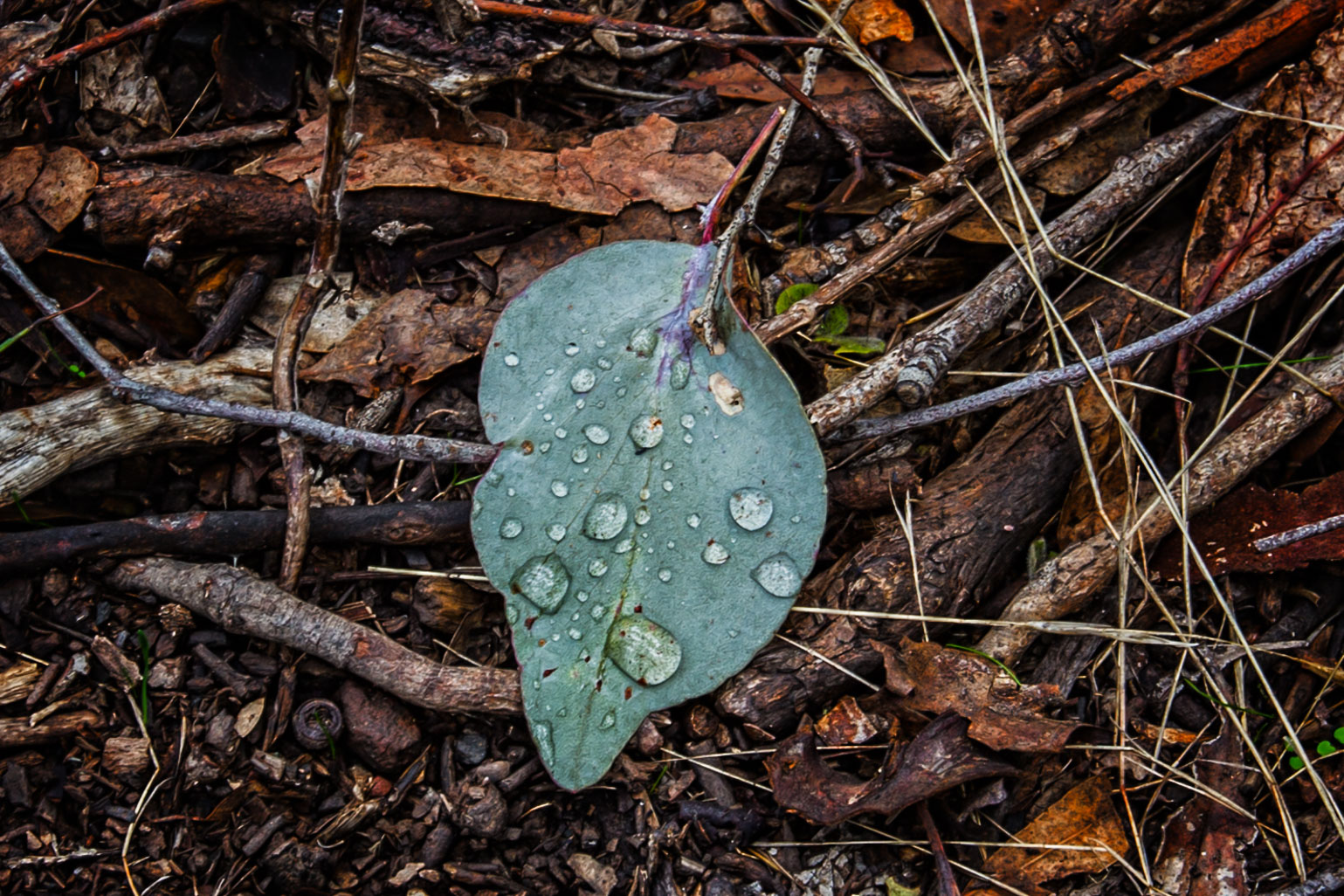 Then it started. What happened here? 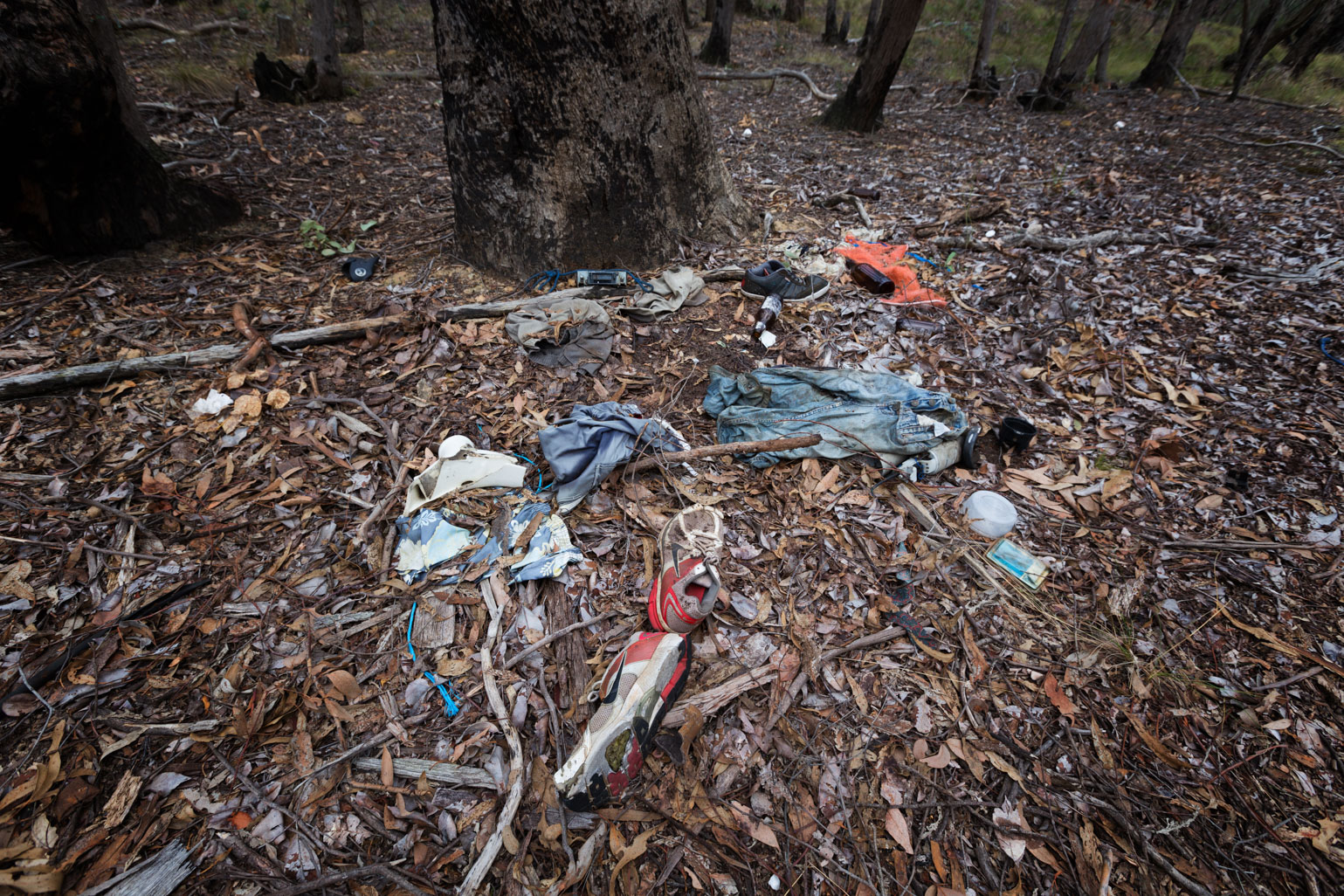 Is this a dumping ground of artefacts from the Slasher of Golden Spring? On it went… 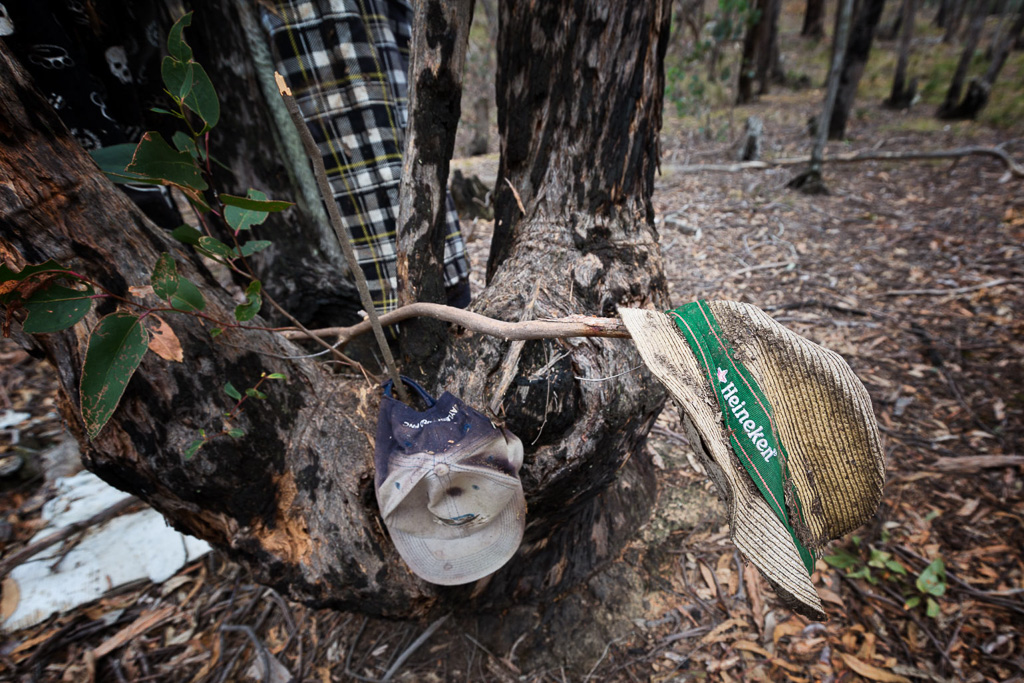 …and the further I walked, the larger the refuse. 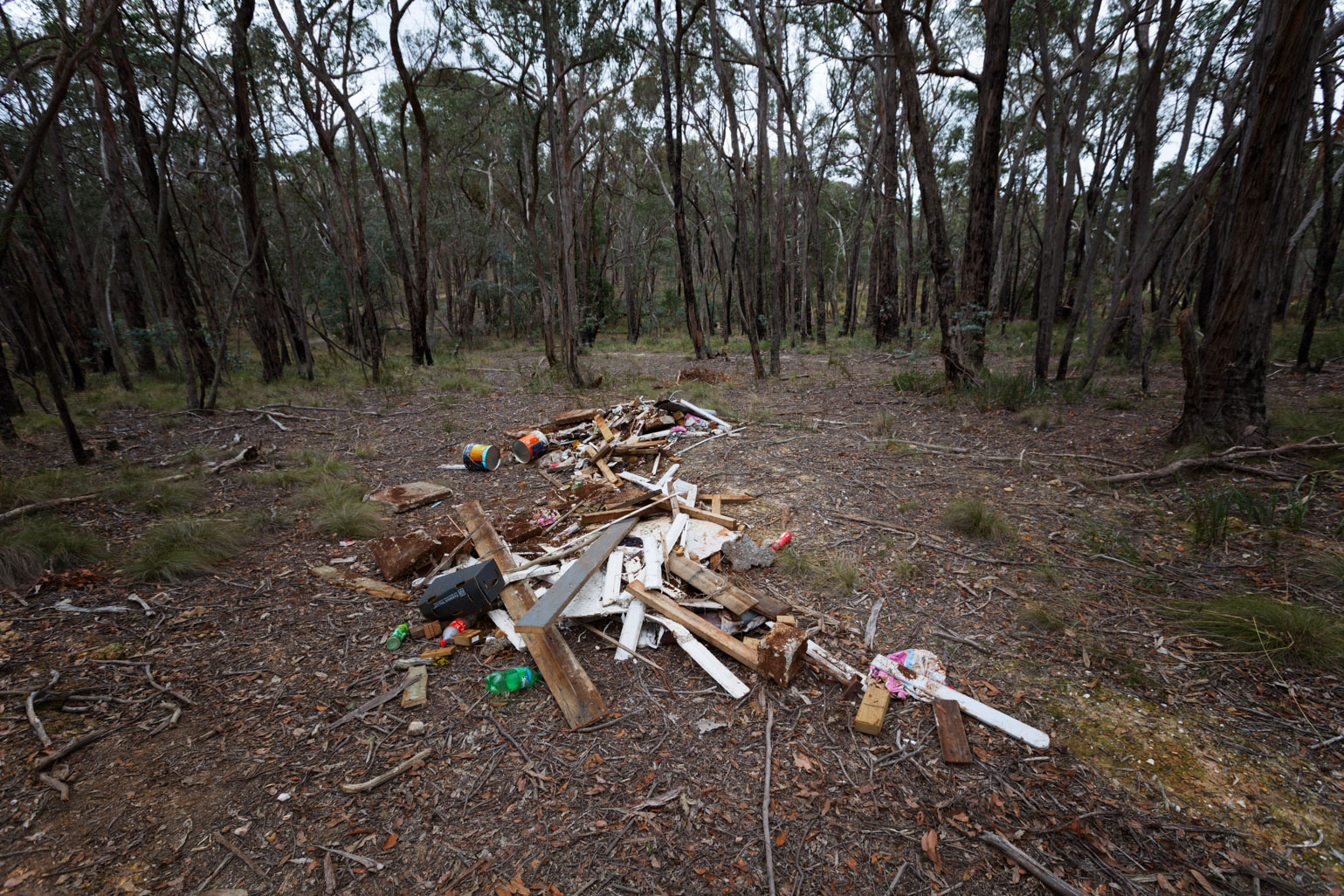 Wandering on I came across this. Is someone taking the piss? How big can a rubbish pile get? 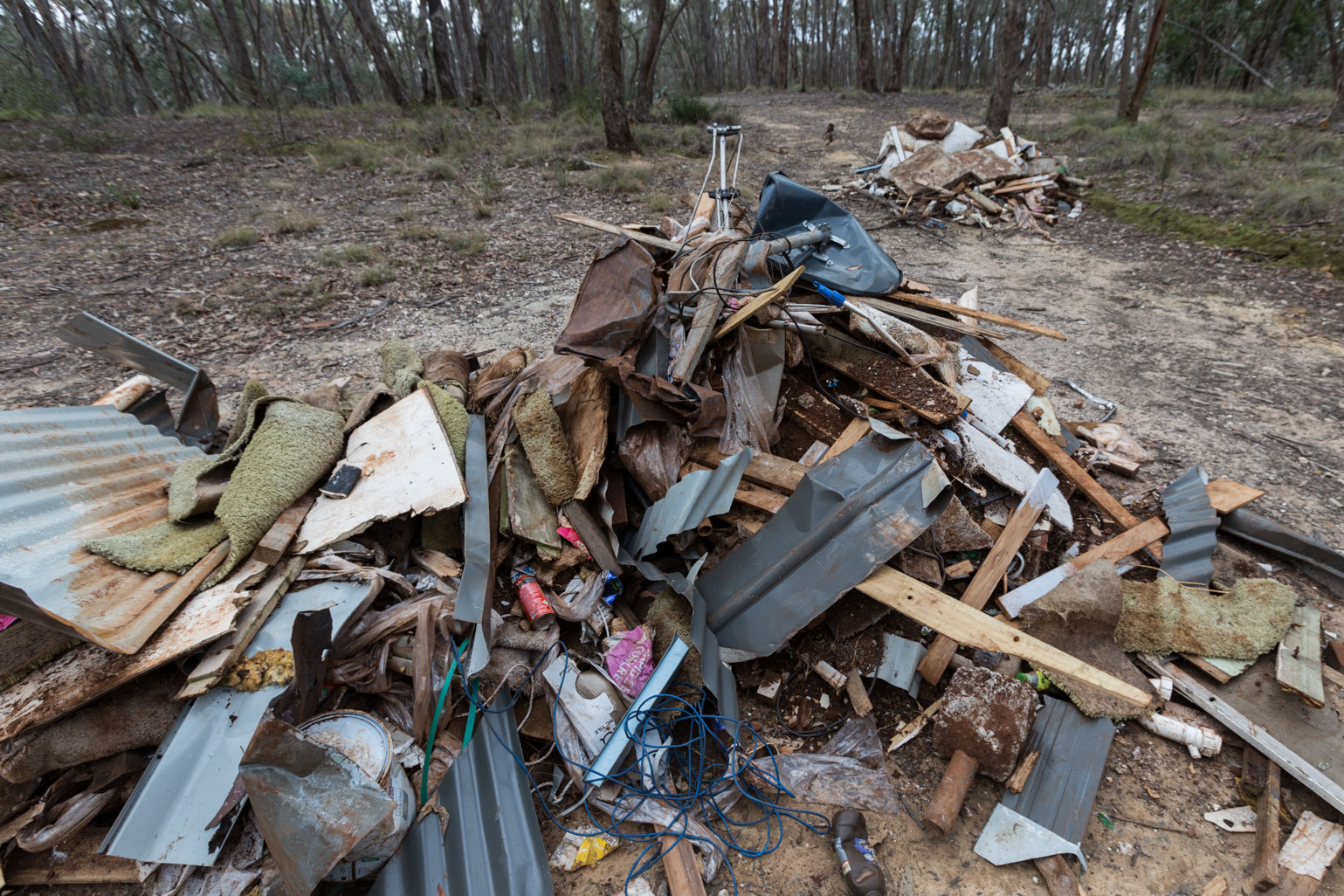 It’s not the first time I’ve seen piles of garbage on a walk, but this was a whole new level. Oh well, I was rapidly closing in on Hunts Dam, so hopefully something a little more appealing was about to appear. 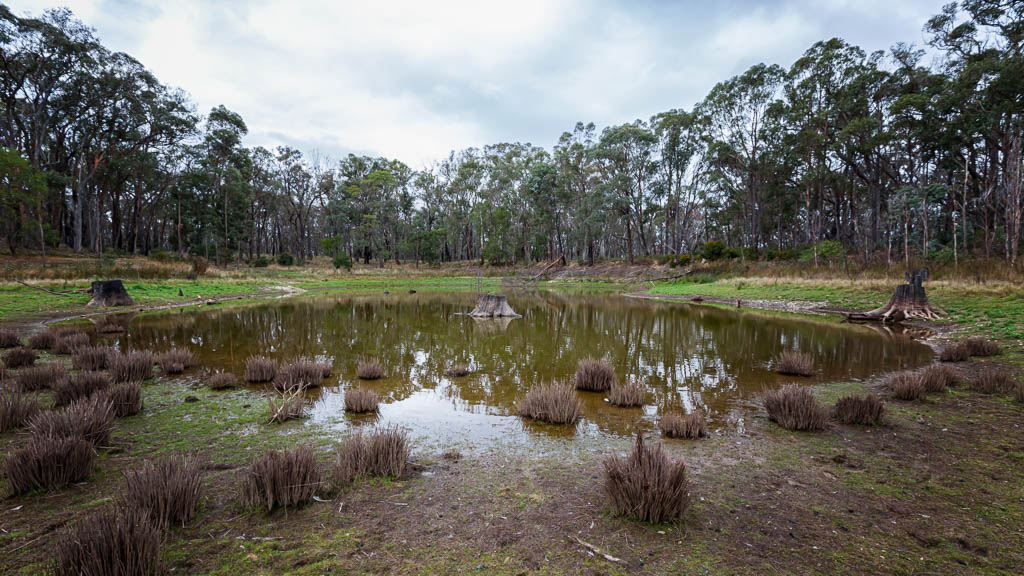 …I suppose all I can say is it looked like a dam? Hopefully that’s not too technical. It was May and traditionally the land is dry as a chip in late autumn, so I couldn’t have expected a vast expanse of water. 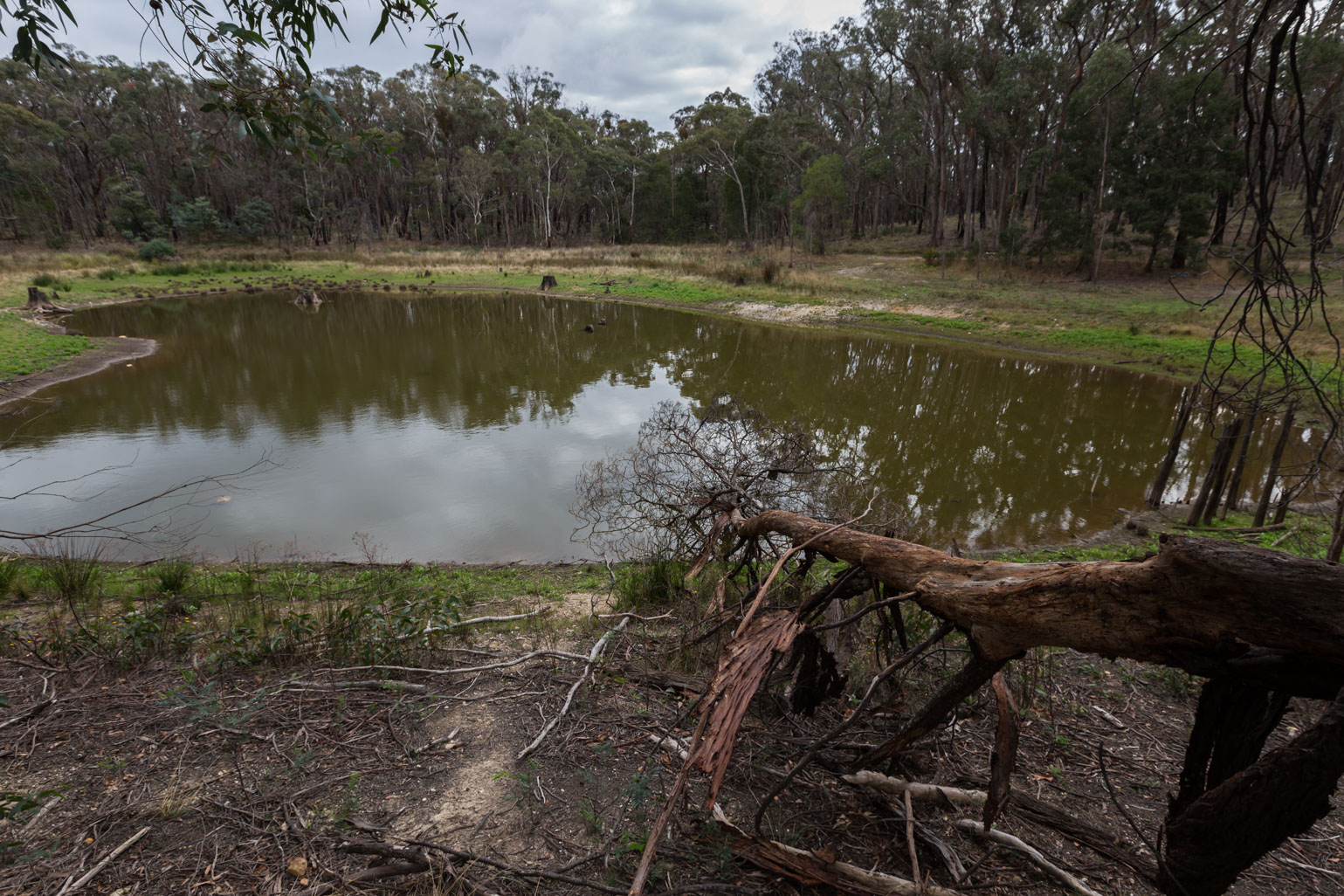 Wandering around, there was a nice feather to be seen. What bird’s it from…? 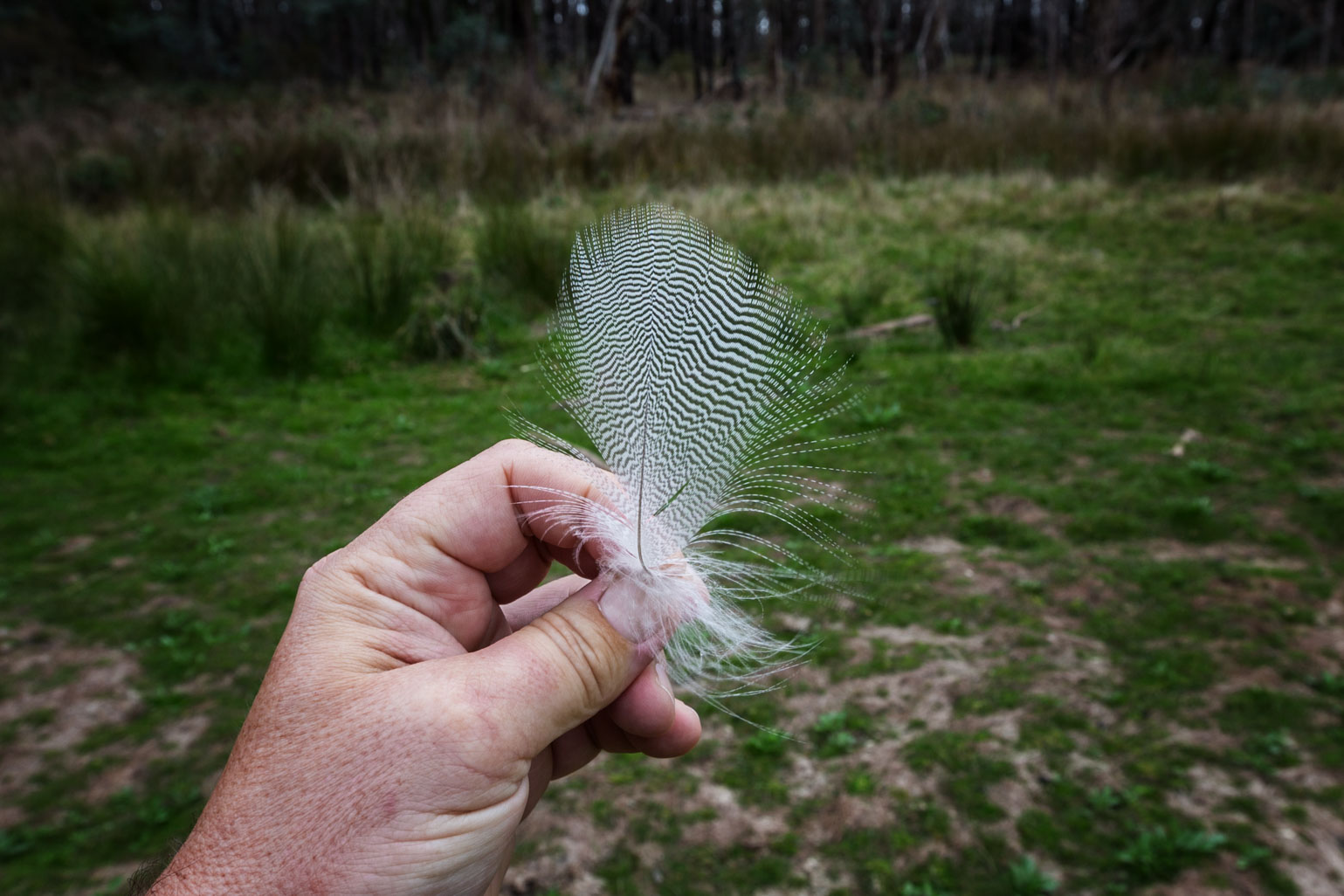 Even here, the litter didn’t stop. As they say, there are only two certainties in life. Death and never winning Tattslotto. 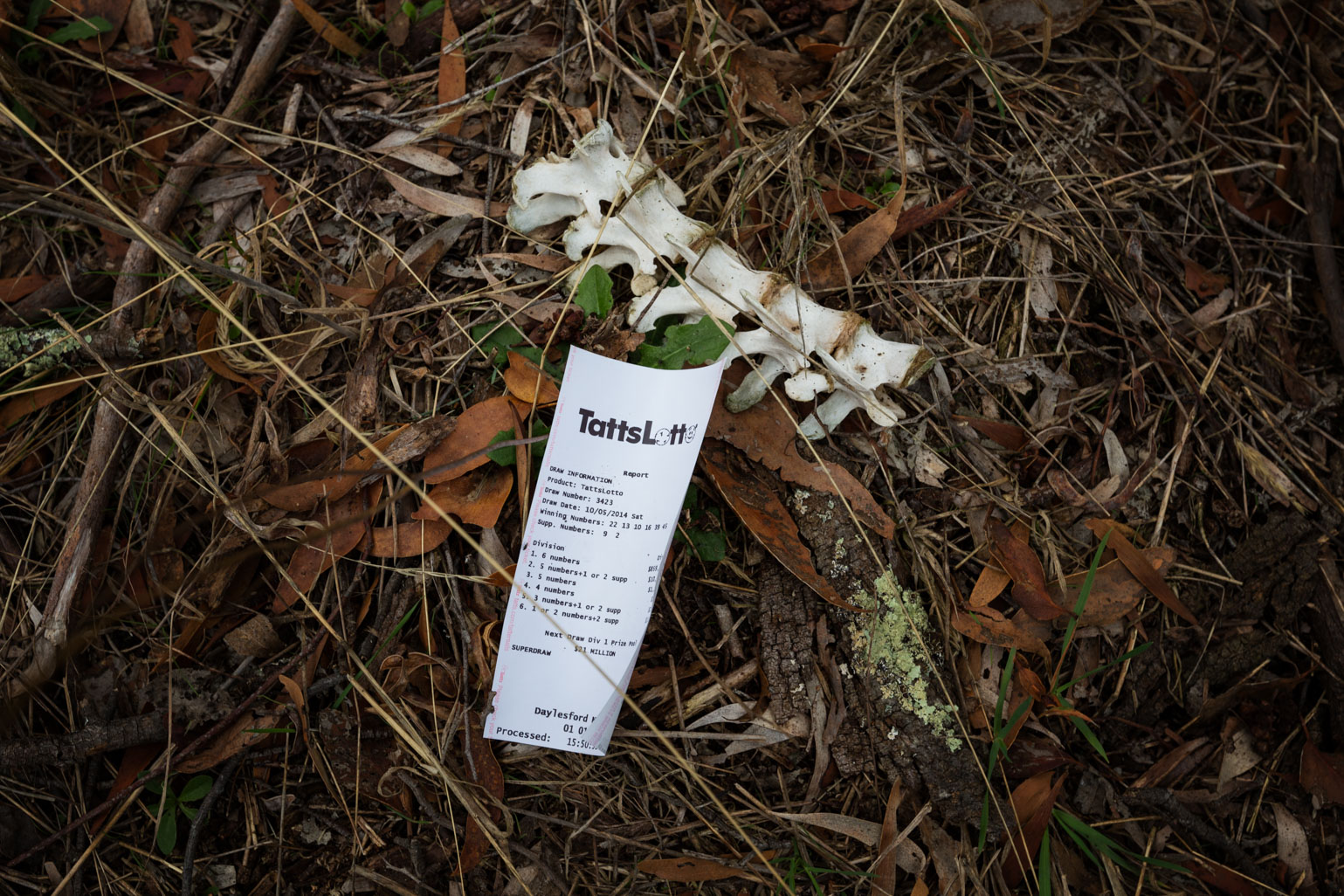 The highlight of the walk was meant to be the dam, so who knows what was to come. One thing’s for sure though. Only a short stroll away the rubbish reappeared. Mm… ‘Superior’, which is ‘Made in Japan’. A decent brand? I guess not, as someone had clearly been displeased with it. Actually, how does it end up out bush. Wouldn’t a broken plate just go in the weekly bin…? 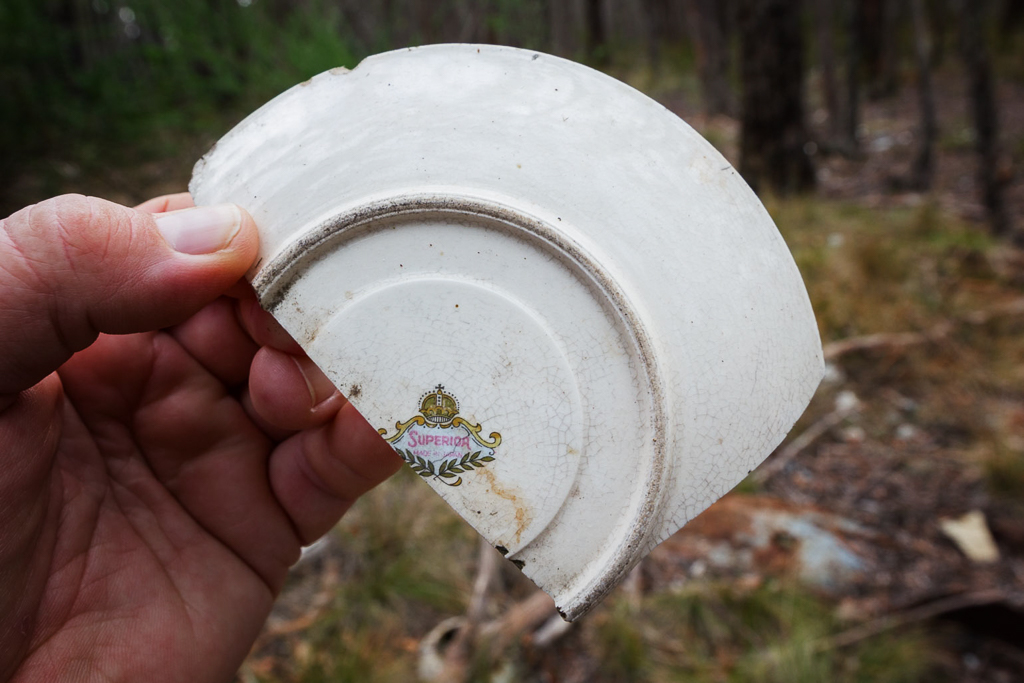 Oh, it wasn’t just plates either. Some blokes bottle collection also got the boot. 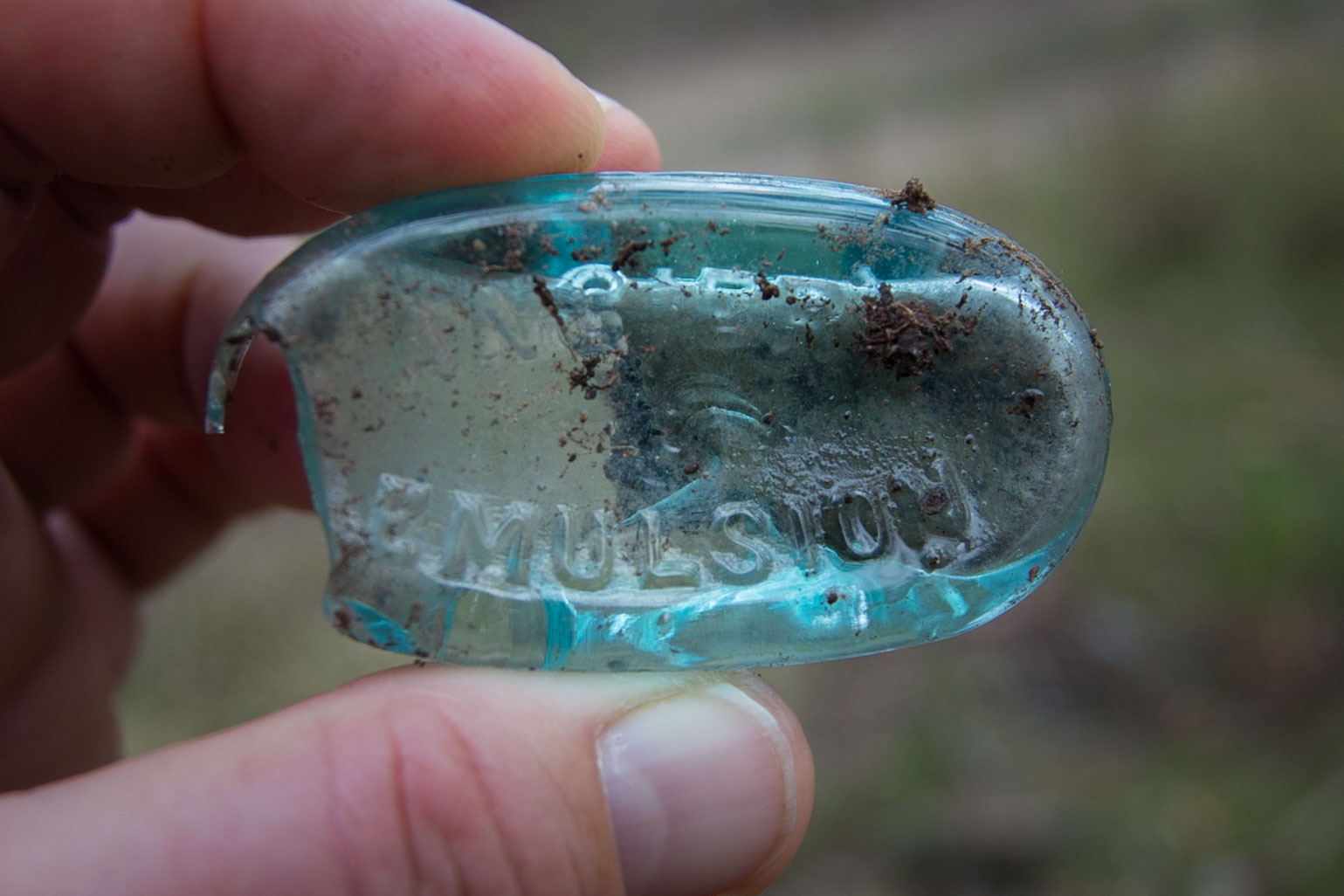 Mm… By this stage I’d officially given up, as I didn’t think the highlight reel would improve, so began to walk back into Hepburn Springs.

There was of course, another spring to examine. I was out of luck with Golden Spring, but what about Argyle Spring? Would it come through with the goods? Deliver some much needed refreshment? Umm… No. 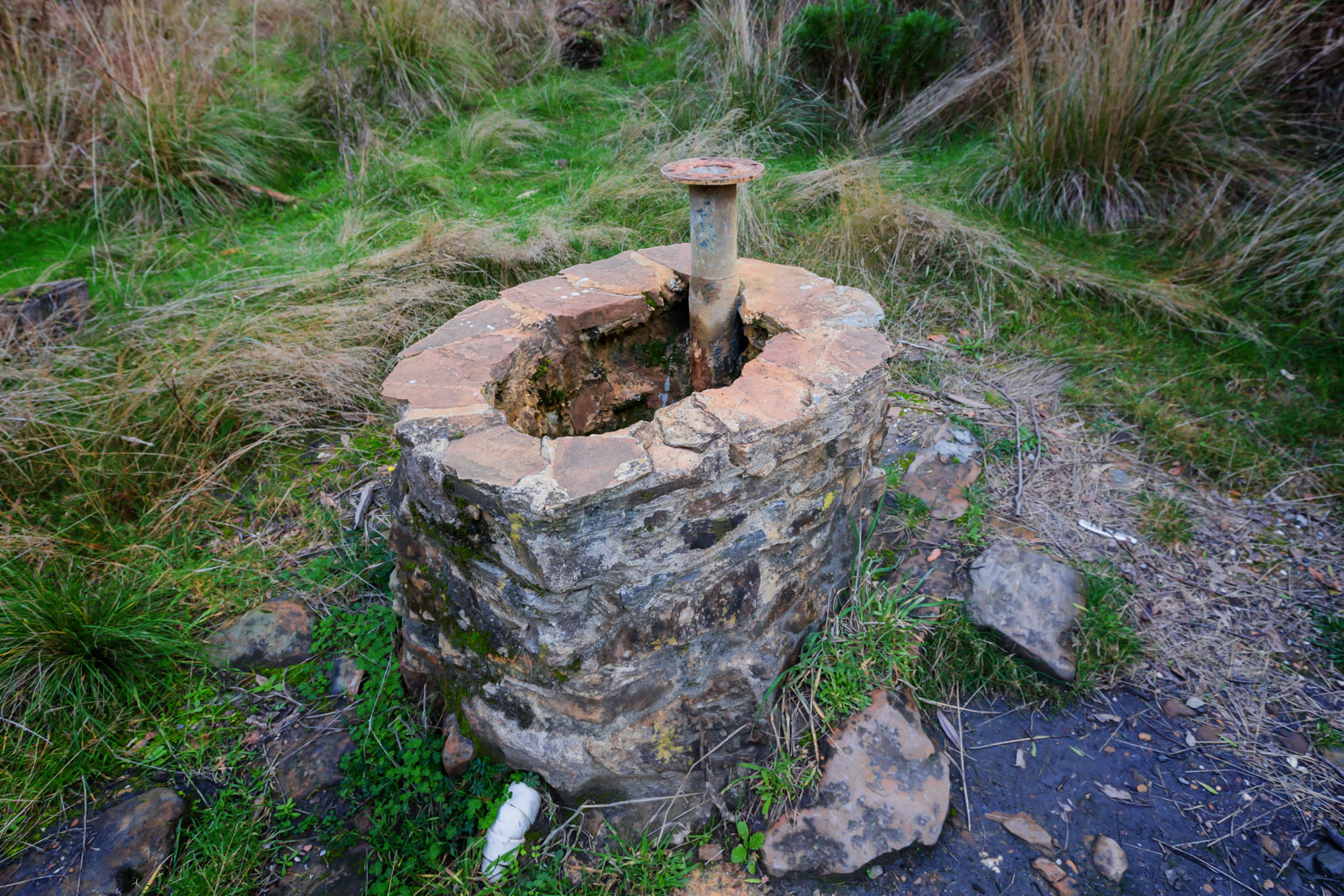 Yet another decommissioned spring. I wasn’t having much luck, was I? There was one difference with this one though, as I didn’t have to get on my knees and inhale a rusty pipe for some water. This one was a little easier, as I could have just licked it off the ground. Mind you, the fluid looked more like something which leaked out of the Torrey Canyon, but I assume the weird, chemical looking colours were actually natural, life-giving minerals. Maybe. 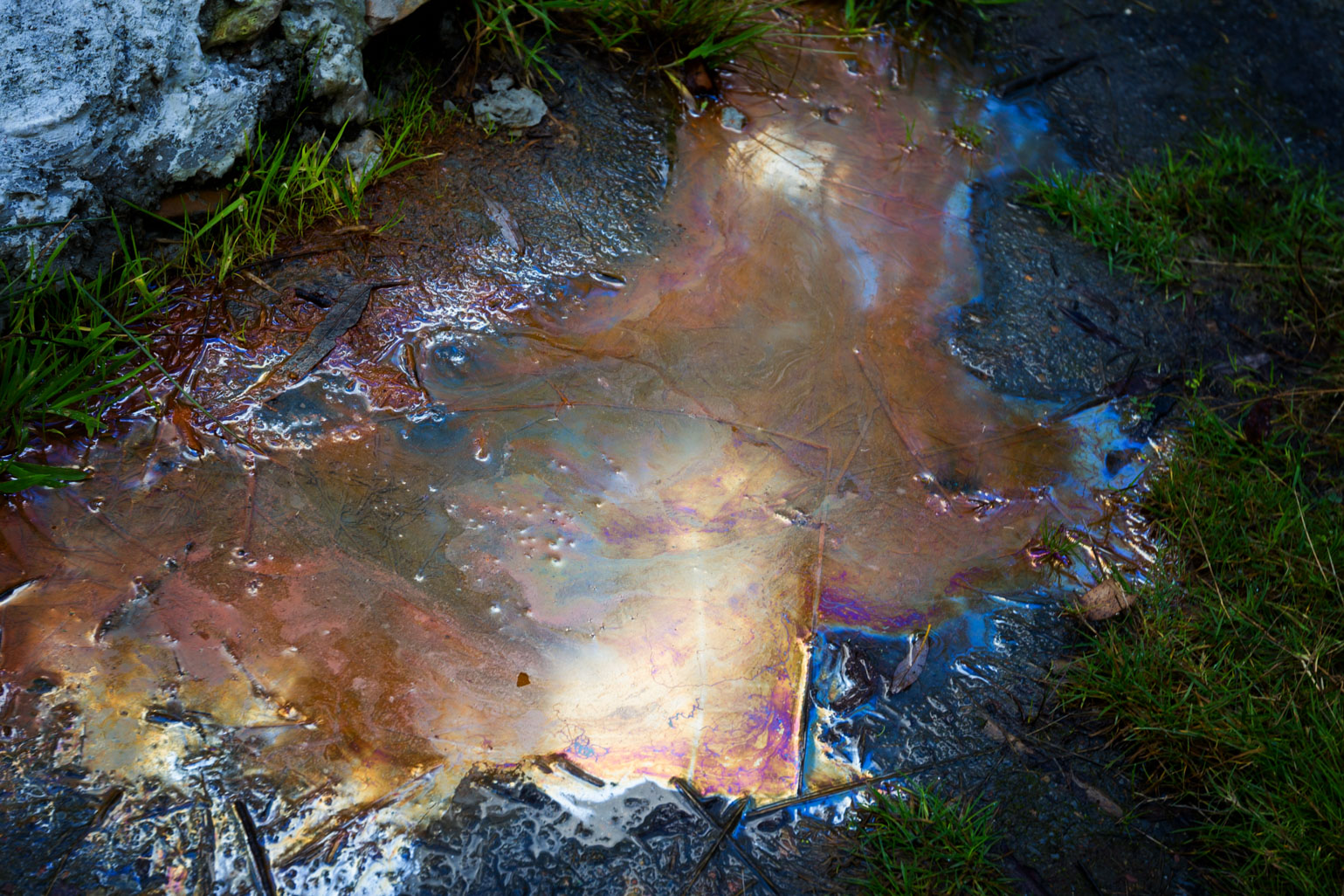 This walk is going nowhere, isn’t it? Then again, what are you worrying about? You can just read it. I had to walk and record it for prosperity, so I reckon I’ve got the hard job.

Then before I knew it, I was back in Hepburn Springs and surrounded by wonderfully, colourful autumn trees. It’s a pity, as you’d think the highlight would be the natural bush compared to the manicured Hepburn Springs. Alas, the former was full of discarded crap and the latter was a more attractive photo proposition. 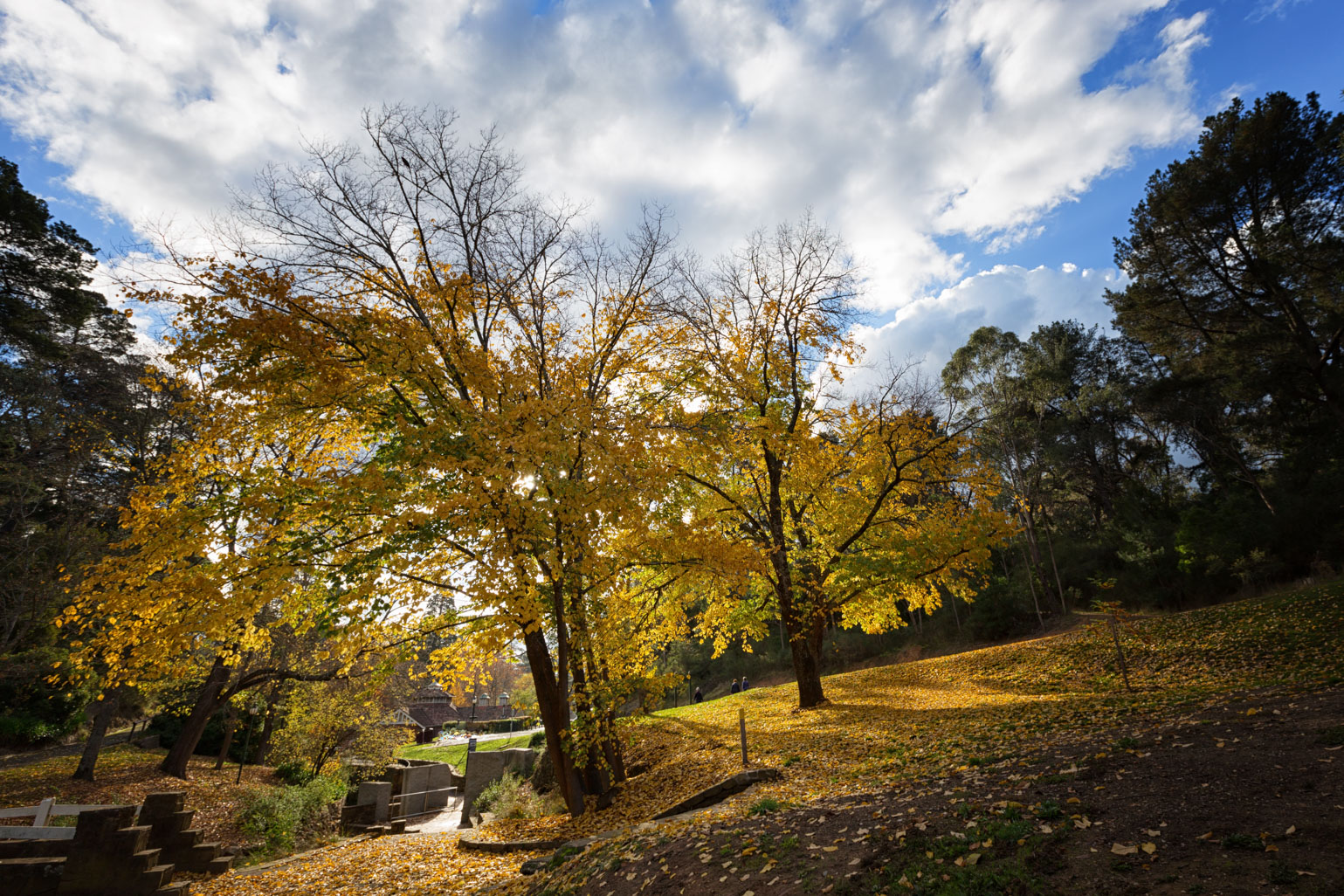 Is that it? I’m fully aware this wasn’t Ulysses, but one can’t be on the ball all the time. In the end, it’s not a blue chip walk, but it’s alright for a bit of an impromptu stroll if you’re in the area. If you actually travelled a long distance to do this wander, then really, you’re clearly insane. Except for me. I did drive from Melbourne to do it, but in this place, I decide who is and isn’t bonkers.

Hunts Dam, Hepburn Springs is not a bad place to wander to, as it’s suitably tucked away in the forest along the Dry Diggings Track in Hepburn Springs. Unlike me, you might even find a winning ticket there.

Oh, this may have been short of highlights, but after scanning my old hard drive, there are approximately 30 walks like this one I’ve never written about. Who knows what’s next? Even I don’t know and I’m one doing it.