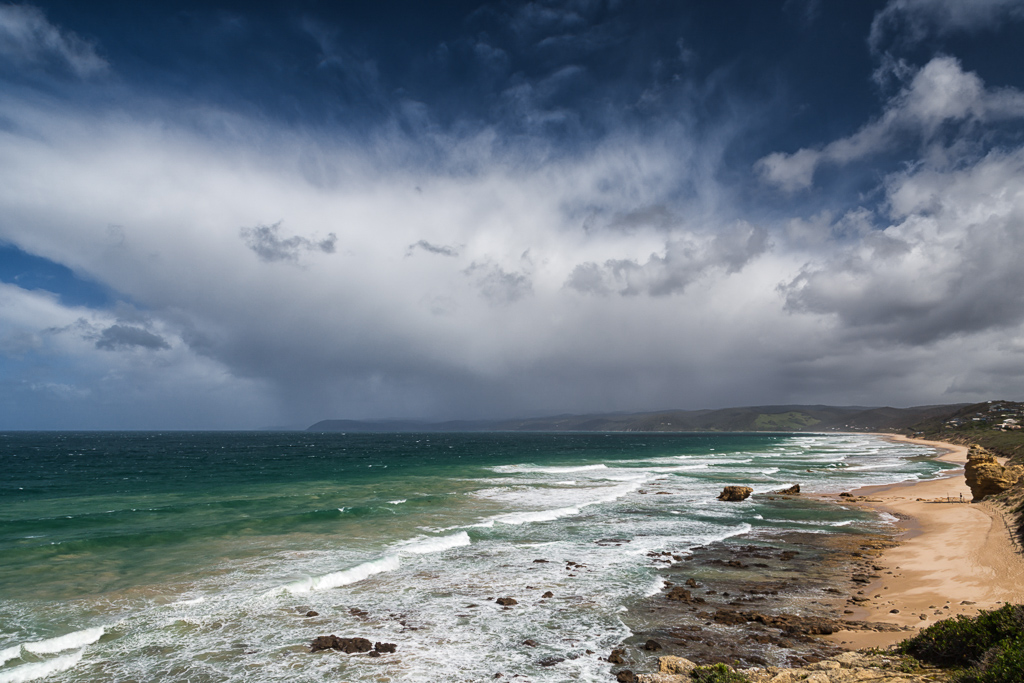 Here we go again. Another day, another post and another moment of wondering why Custer didn’t get his packs. Did Benteen think he said snacks instead? I’m telling you this, if I ever send a message which could be interpreted as snacks, then yes, it would be correct, as snacks are my default setting.

Anyway, this is another semi-retro post, as I did this walk in May this year. I was scrolling through the old GPS files and noticed in the month of May I walked on 22 days. I think that was a good effort? In the end, I might as well write up a few of those retro walks. Oh, by the way, what’s the date range where I can use the word retro? Is last May retro? What about ten minutes ago? I just had a toasted cheese sandwich and it felt retro. How’s that? Time and feeling creating a full retro experience. Amazing.

Have you heard of Christmas in July? Well, this is the same thing, except it’s May in September.

I found this particular walk in the Glenn Tempest book ‘Daywalks Around Victoria’. If you peruse it you’ll notice he went for an extreme succinct style by calling it ‘Around Aireys Inlet’. As you can see from this posts title, I’ve got no time to be writing ‘around’, so I’ve pared it back a little more. Writing ‘around’ is annoying anyway, as essentially it’s open to interpretation. If you’ve got good walking legs, an ‘around’ to you might be from Aireys Inlet to Echuca and back. In a day.

Oh, I also noticed he’s now up at Natimuk running a cafe. I checked it out online and for the life of me I’ve no idea why he didn’t name it, ‘A Tempest in a Tea Cup’. It’s the perfect name! As a result, I expect my cheque in the mail.

How about this walk? It’s longish and I did it a few days after the infernal northern circuit of Wilsons Promontory, which you’ve recently had to endure in writing. The 20 km didn’t seem too bad a distance, as I thought I’d have picked up some fitness from the four day Prom walk. Well, yes and no. Let me explain.

The traditional GT walk is step out of the car, don the backpack, walk ten paces and immediately start climbing a vertical hill. I’m sure he gets a kick out of writing up track notes for chumps like me to suffer on. Yep, this walk was exactly the same. I parked at some drunken den called Distillery Creek Picnic Area and began strolling. It was lovely. Still, no wind, the birds were tweeting, sun shining and I was thinking, ‘How good this is?’ For about 0.35 seconds.

Turning onto Boundary Road I looked ahead to see the straight, unmade road reach up towards the stratosphere. Huh? I barely took a breath between ‘How good is this?’ to ‘Tempest you bastard!’. I’m not sure why I’m always surprised? Anyway, I slipped into locomotive mode (sans whistle) and plodded up. Looking up with a contorted face now and again was beneficial, as I saw some competition farther ahead. Walking in the same direction was the world’s oldest man, with legs so bandy, his knees were on the outside. He was chipping away at the summit and I expected to be roaring past him in any second… 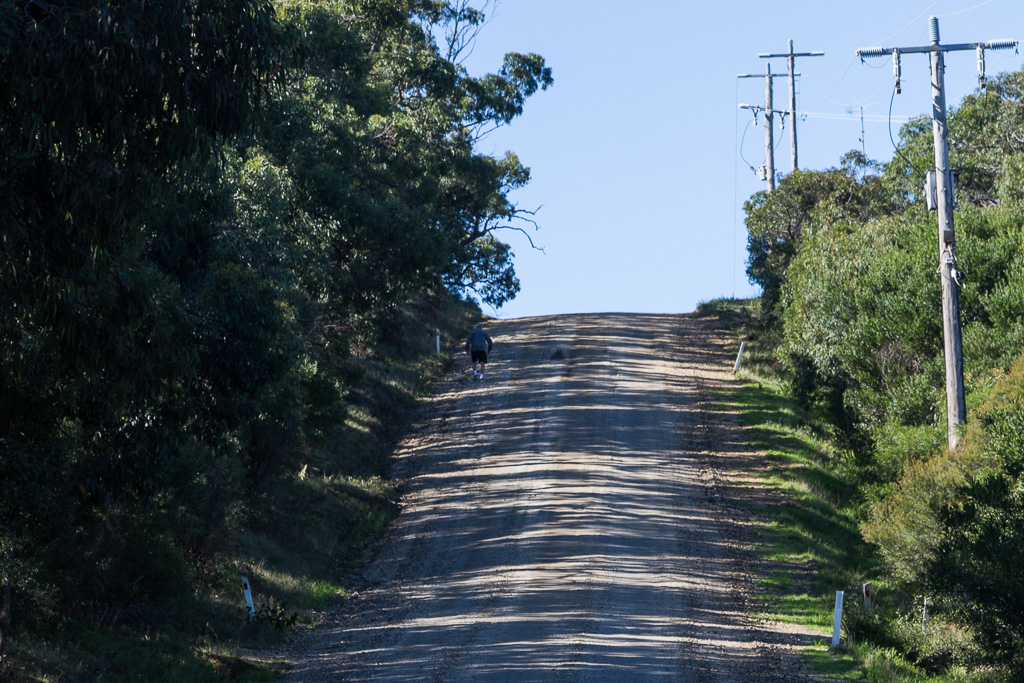 He went over the top and I dutifully followed, but there was a problem. I kid you not, but as I cleared the hill and could now see all the way to the coast, he appeared to be about a kilometre ahead. I’m not sure if this is possible. I pondered many theories. Was I in a time bubble and reality has shifted? Is he an alien? Is he the ghost of Emil Zátopek? Am I just a fat bastard who’s a slow walker? These were all good ideas and as yet, I don’t have the answer to what happened on that sunny May day. All you need to know is he was a long way away in a short span of time. 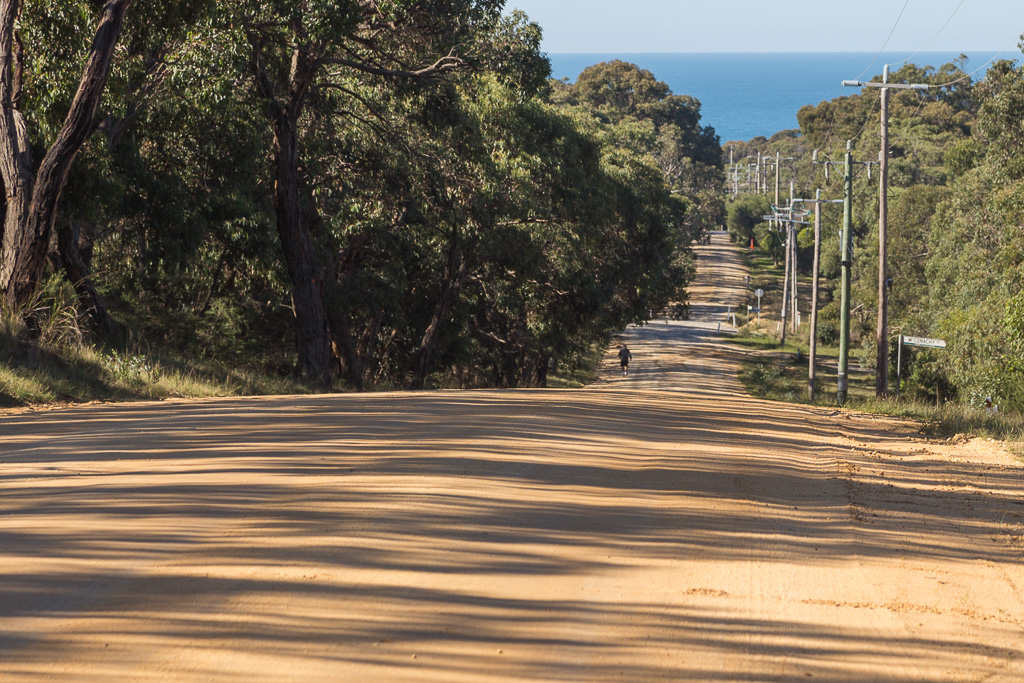 Things had started out glowingly, but now I was suicidal in no time. All it took was a steep hill in the first ten feet and an insanely fast corpse. It doesn’t take much.

There certainly wasn’t any navigation problems here, as it appears Boundary Road was created to be the straightest road in history and one could navigate with a blindfold on and not get lost. Oh, take it off at the end though, as you’ll fall into the ocean.

Reaching the sea, there was a nice little winding path along the cliff tops. At one point I came to a set of stairs and it didn’t make sense to pass them by, so I wandered down for some beach action. 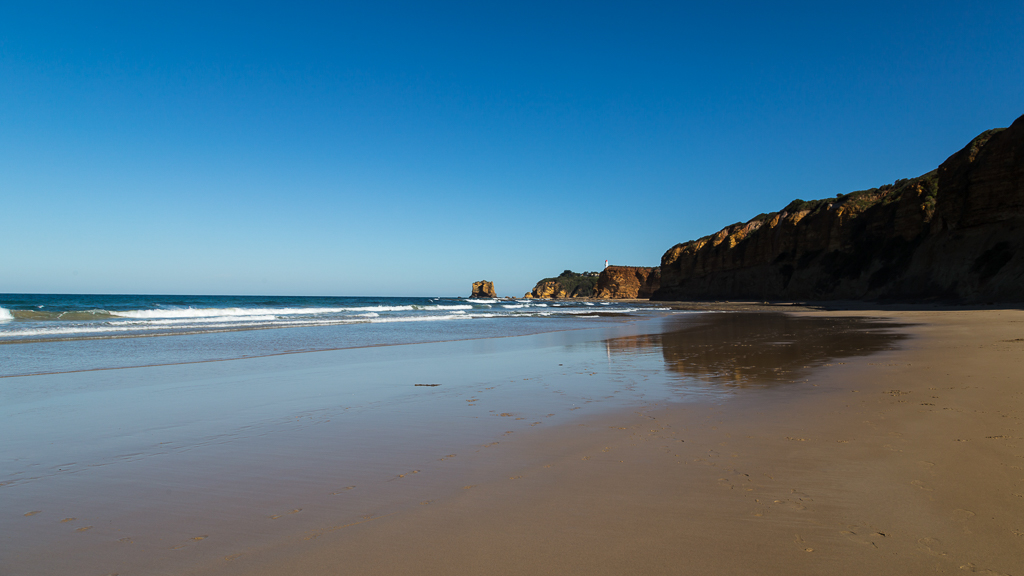 I stood, looked, turned around and climbed the stairs back to the cliff top again. I’m not sure what the purpose of this descent was, but at least I’ve got a beach photo rather than one from up high.

As you can see from the previous shot, the Split Point Lighthouse was in sight. The savvy reader here will be sick of that lighthouse, as it’s appeared a million times and even has its own post.

Walking on, it was soon looming through the trees… 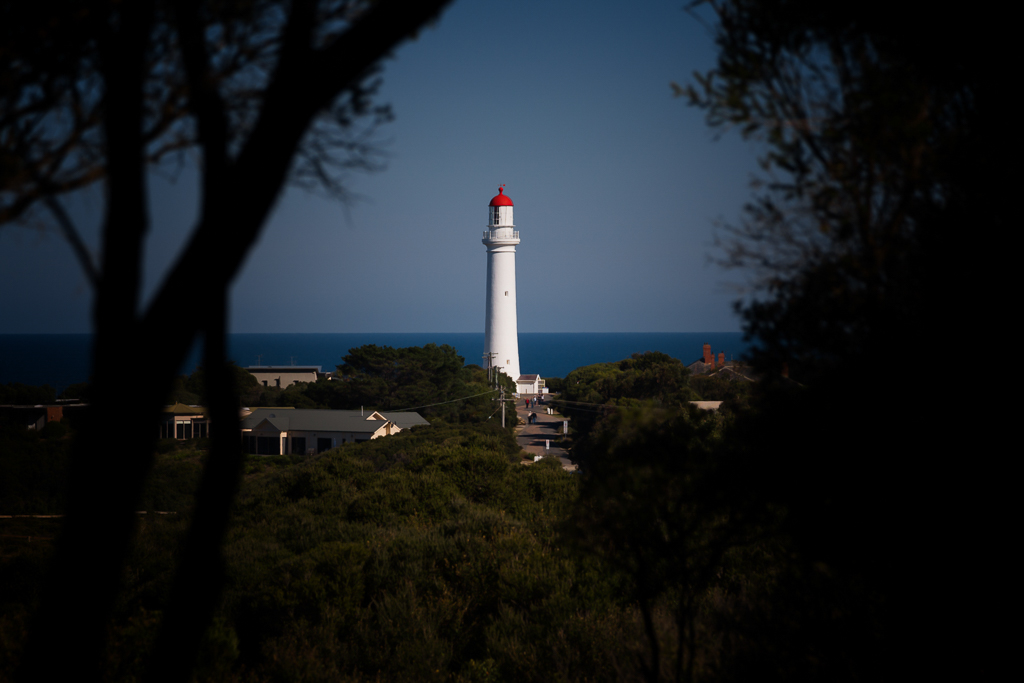 …before a bit more time passed and I was standing at its base. 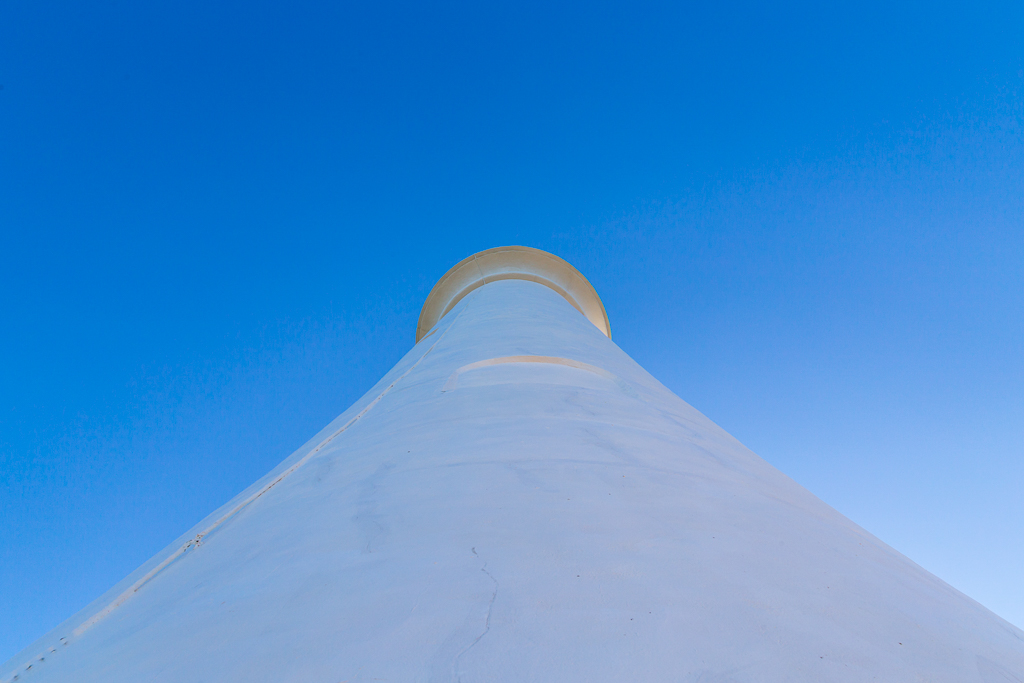 Really, it’s one of my favourite coastal spots with its headland jutting out into the sea. Not to mention the large, bright white structure stretching skywards. It’s a lovely spot to sit and have a bite to eat and my snacking location contained this view, but not really. Yes, I was looking in the same direction, but under a clear sky and benign conditions the photos were pretty plain, so I’m using one from another trip. Can I do this? Interchangeable photos? I should ask the bloke who does the blog and I’ll get back to you. He said yes. You really can’t get better service than that, can you? 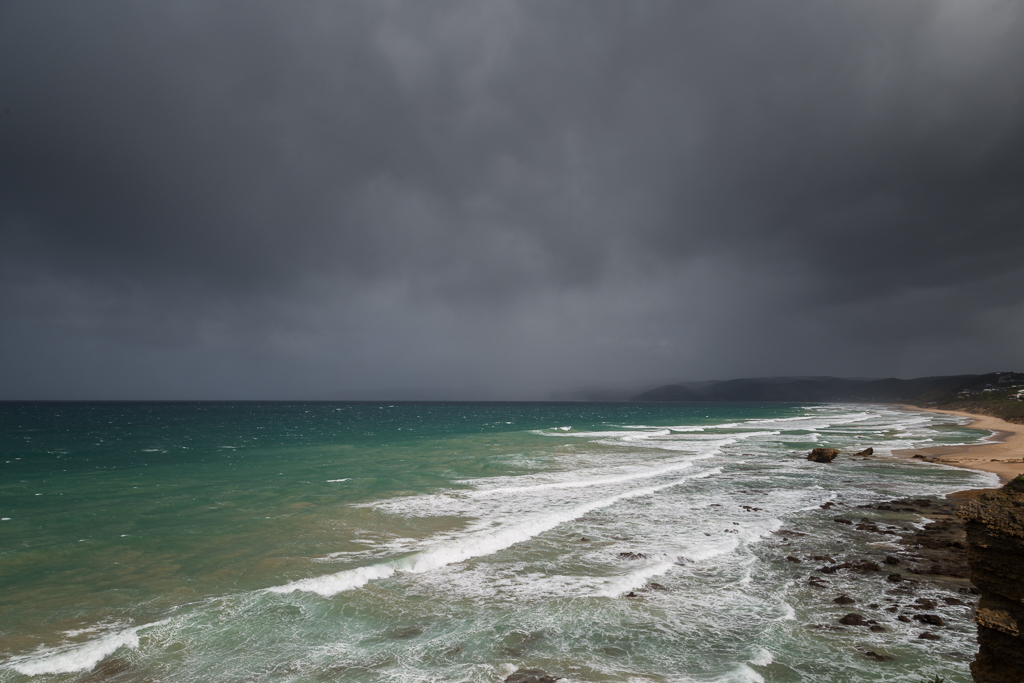 Now filled with high cholesterol, I began the wander down to the beach. Calm conditions are always nice when strolling on sand and I did spend some time trying to nail a wave photo, where the water is in the centre of the frame and whilst keeping my feet dry. Always a problematic activity, but this one wasn’t too bad.

Finding some decent driftwood is also on my beach fossicking radar, but in some way, I was impressed to see this beach was clean of any debris. Most beaches I visit seem to have at least a plastic bottle or a shoe on them. Did I mention the time I found some blokes spine on the beach? I’m not sure how to write that post, as it might not pass the PG rating. Maybe another day.

There may have been no driftwood, but I did spot this wonderfully translucent feather. Look at it! You can see right through! 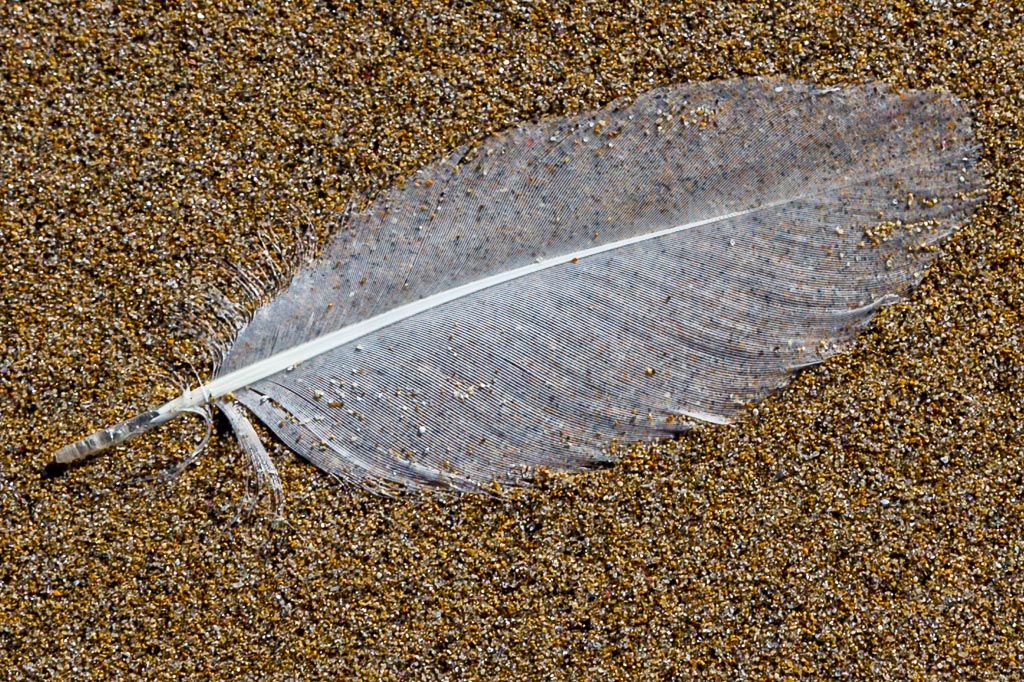 You’ll might be surprised by how well this is going, but other than being outsprinted by a fossil, it was quite a good walk. Leaving the beach though and heading inland, I passed some blokes working on a power pole, almost got run over when I decided to walk on the road instead of the foot path and noted it was bin night. Yes, it was that sort of walk.

Leaving ‘burbs-lite, a long climb uphill began and I’m not sure what happened. Where did all of my Prom fitness go? I’ve no idea, but the world’s smallest hill left me panting and puffing before needing to stop for a decade to get my breath back. Other than a horse rider racing by, it was quite serene and the hills beckoned. 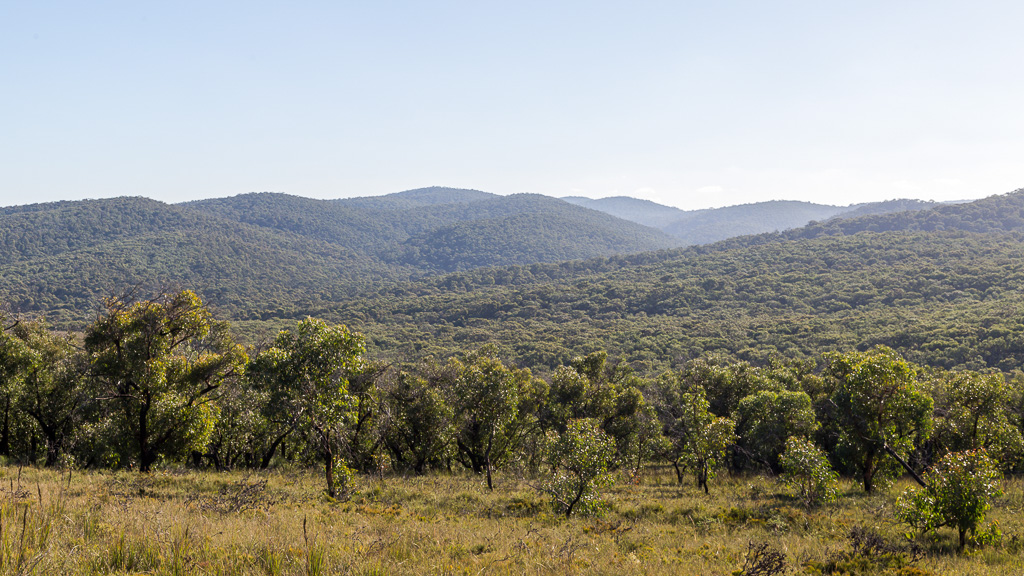 Except I didn’t go into the hills at the rear of the photo (don’t you hate that?) and instead began a descent to Moggs Creek Picnic Area. Do you realise the walk is almost over? If it’s 20 km, you’re probably wondering what happened to the rest of it? I have an answer to your question. I’ve forgotten.

What I do remember is pottering around the picnic area and spotting something tucked away and more or less out of view. It was some fungi, but not your average mushroom. Have a look at this. 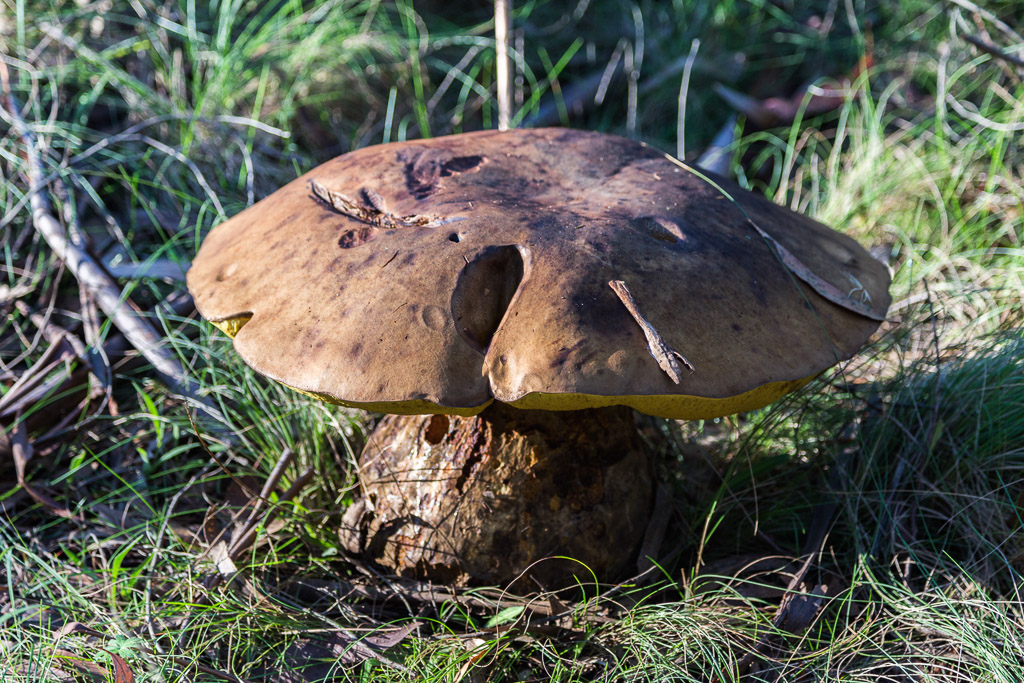 Yeah okay, it doesn’t look too exciting, as some scale is required. Right, get this into you. Here’s my size 48 boot next to it. Does it look a bit more impressive now? 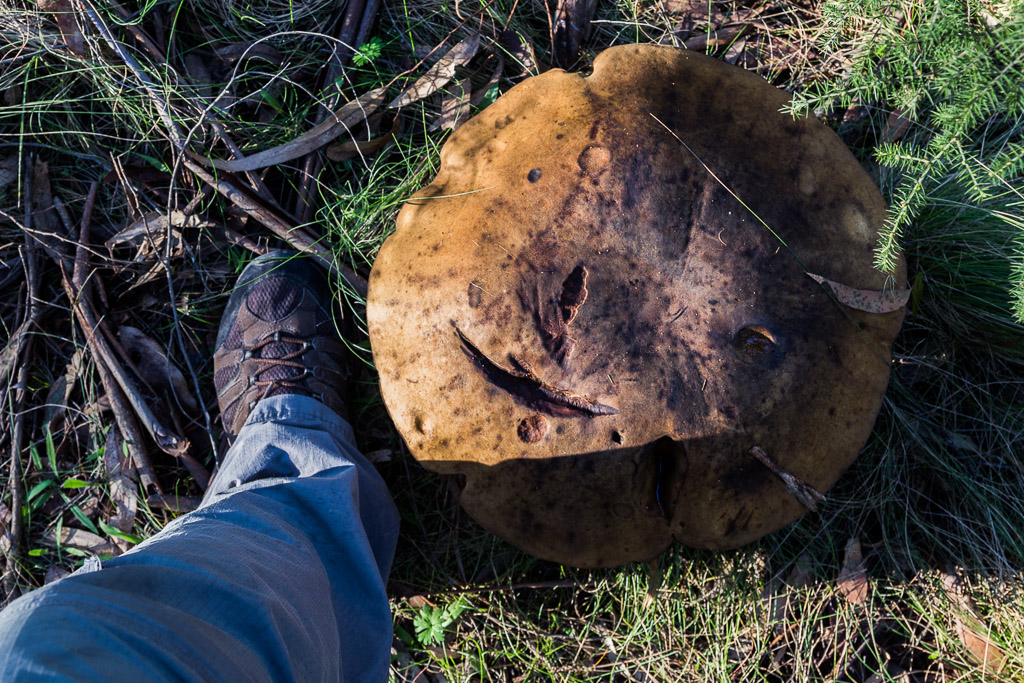 Leaving Moggs Creek, it was a bit late in the day, so I had to get motoring, although I’m only having you on, as you saw my speed at the start of the post. I began chugging up a long hill on a track, which has some sort of name. I think. 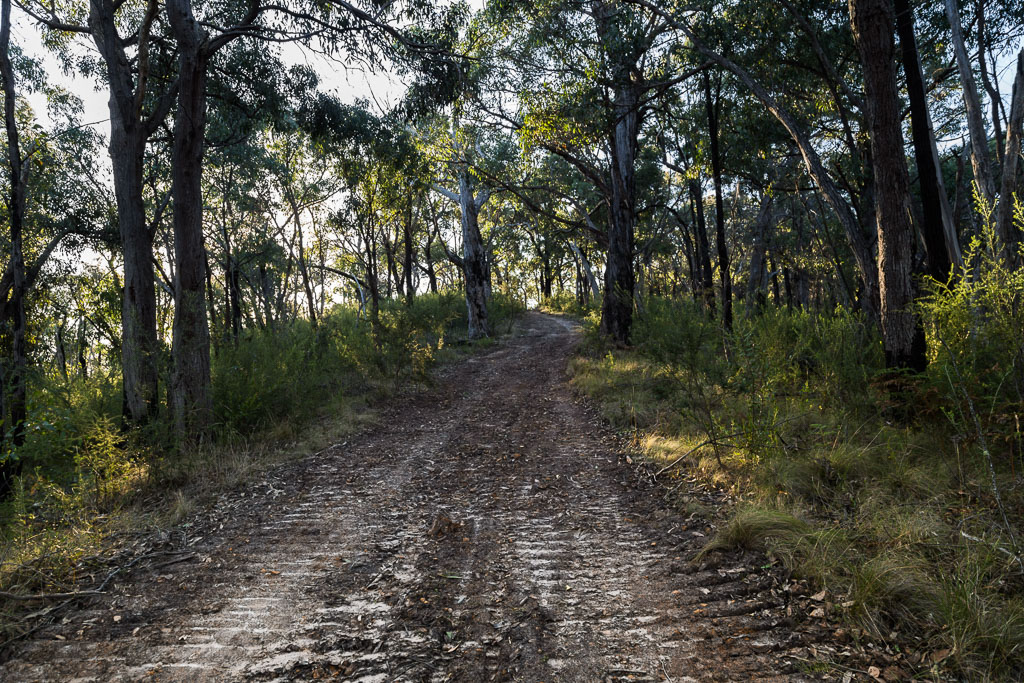 Climbing upwards, I admired the late afternoon sun filtering through the trees. The sloth-like speed wasn’t great, but one can’t have it all. There’s one advantage of barely moving and that’s a lot of time is spent looking at the ground. A flower to admire… 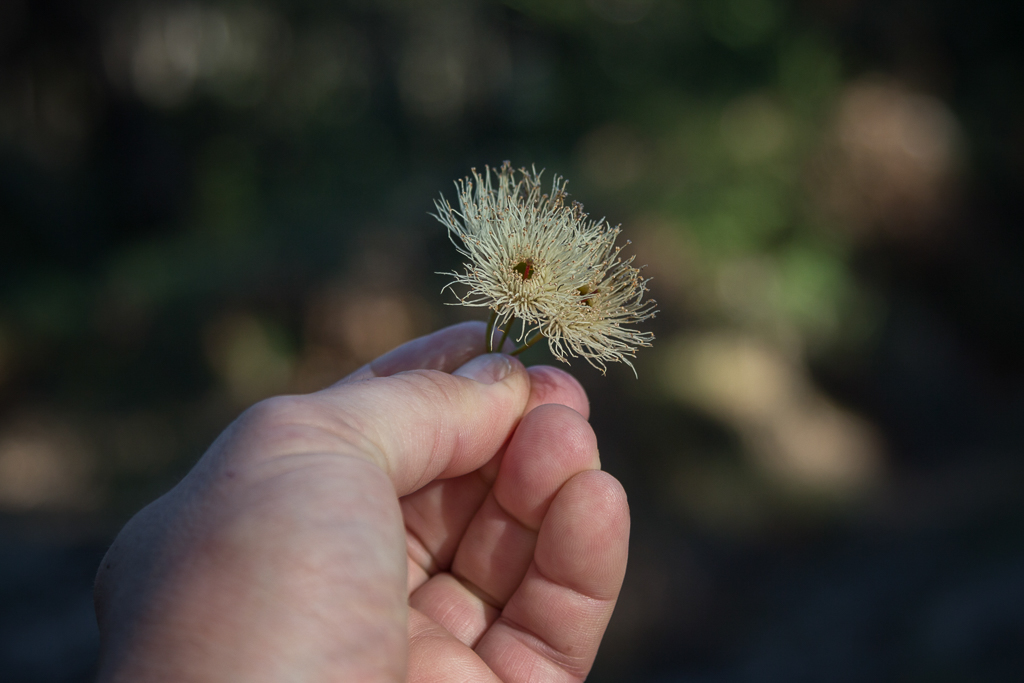 …or an impressive reflection within a puddle of water, which looked like a passage to another world. 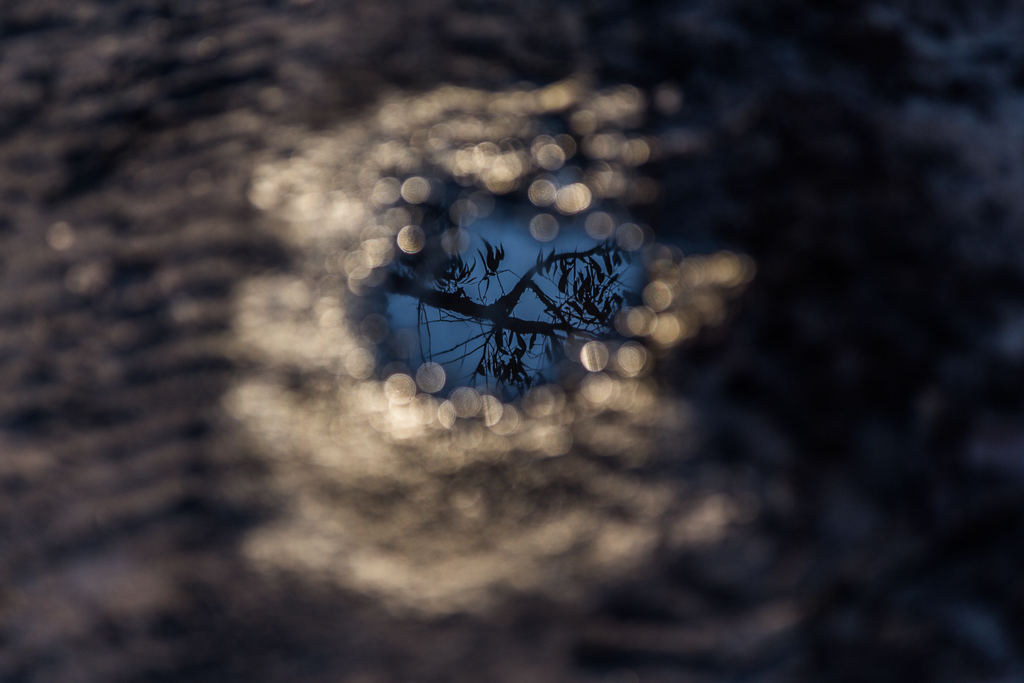 Once over the hill, it was a casual descent to Painkalac Dam. I must say, the warm glow from the sun, low in the sky, may have been nice through the trees, but it was equally attractive across the water. Quite peaceful and if I had some more time I may have put my feet up for a while. 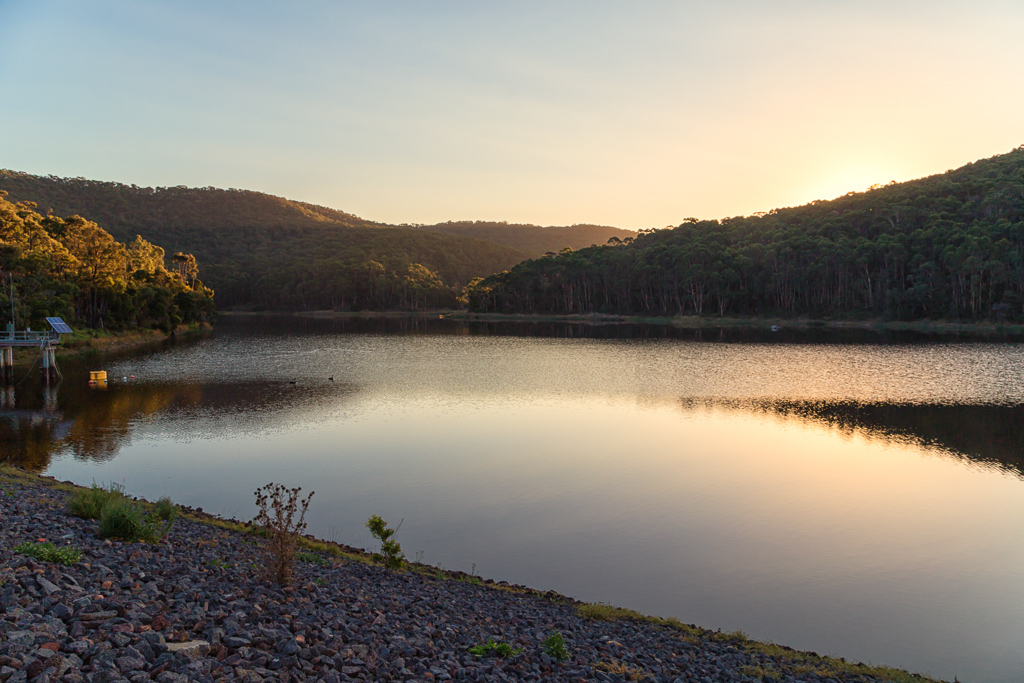 There was no time to lounge around though, as light began to fade. Heading off, I kept my eye out for more interesting reflections… 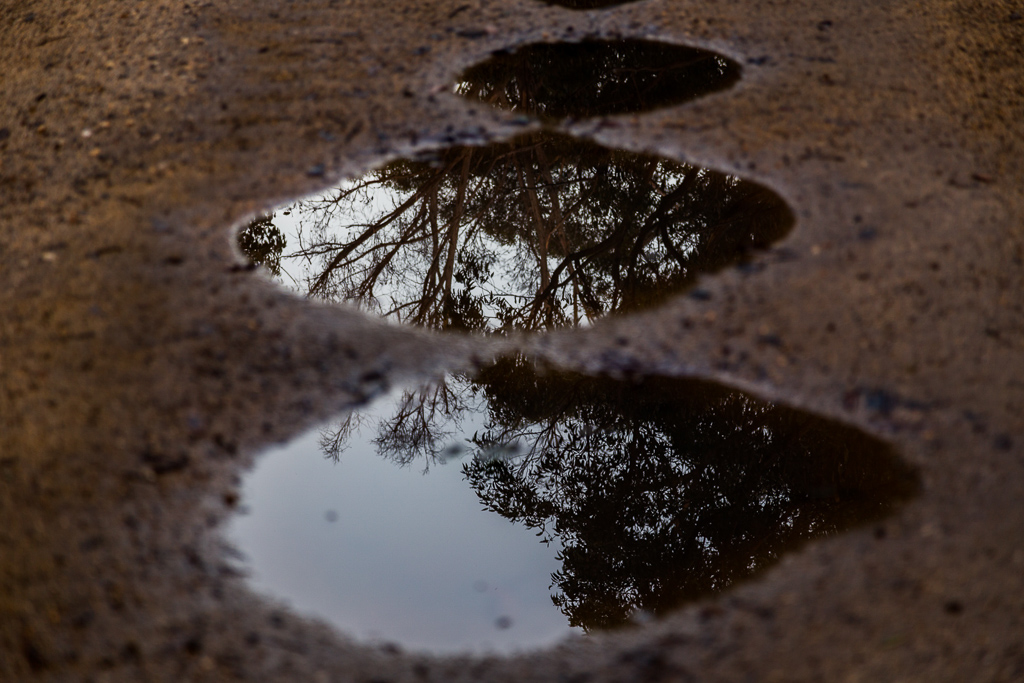 …before taking what I thought was my best photo of the day. As a picture, this leaning road sign gave me more of a kick than any other I took on the walk. Yep, this is what it’s come down to. 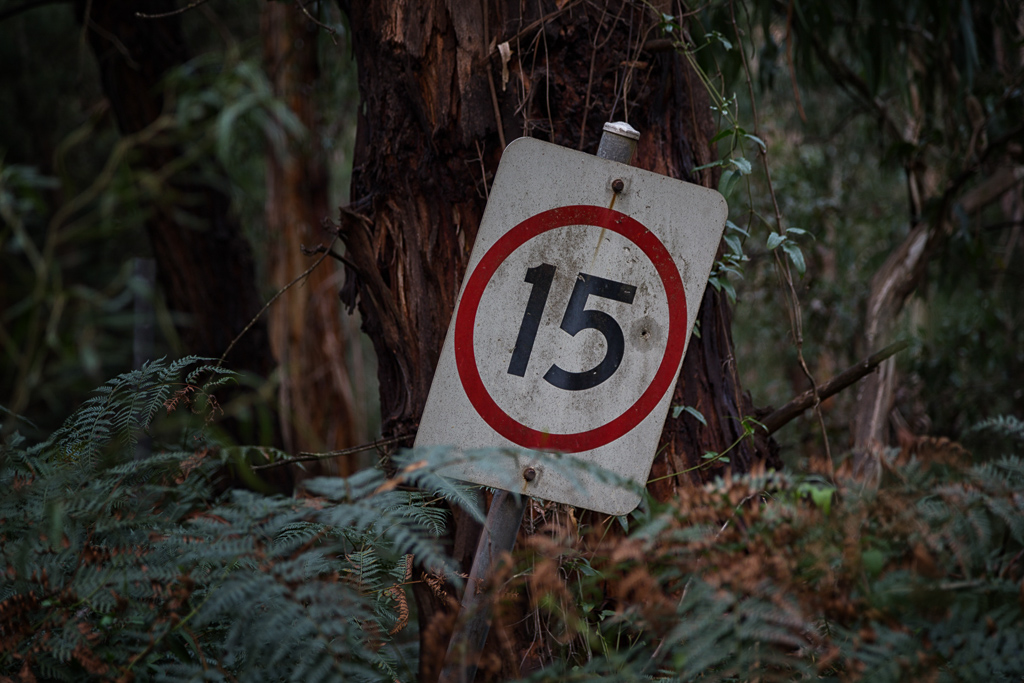 Before I knew what was going on, I was back at the car. That wasn’t too bad, was it? On reflection, I think the 20 km circuit of Aireys Inlet, Great Otway National Park was a nice walk, but again, I missed out on the suggested trip time. It’s list as five hours, but it took me 5 hours 40 minutes. Oh well…

On the subject of GPS readings. Remember a few posts back I was moaning and crying about the new Garmin Connect website, that corrupted most files I’d uploaded? Well, I thought I’d backed most of them up, but it seems the ones from a few years ago weren’t. Silly me. Unfortunately, I’ve lost some of the trickier ones. Mt Buller traverse, the Big Walk up Mt Buffalo, Langi Ghiran, the entire first attempt of the Great South West Walk, Mt Difficult and Briggs Bluff circuit. Actually, it goes on and on.

What I really want to know is, if the GPS file doesn’t exist, did the walk really happen? Mm… I’m not sure about re-doing any of those again.

As an alternative, I’ve been dabbling with Strava, but even that place has its quirks. It’s great for cycling and running, but I’m not sure about the hiking part of it yet.

Anyway, is that it? Will I ever escape May? I doubt it.