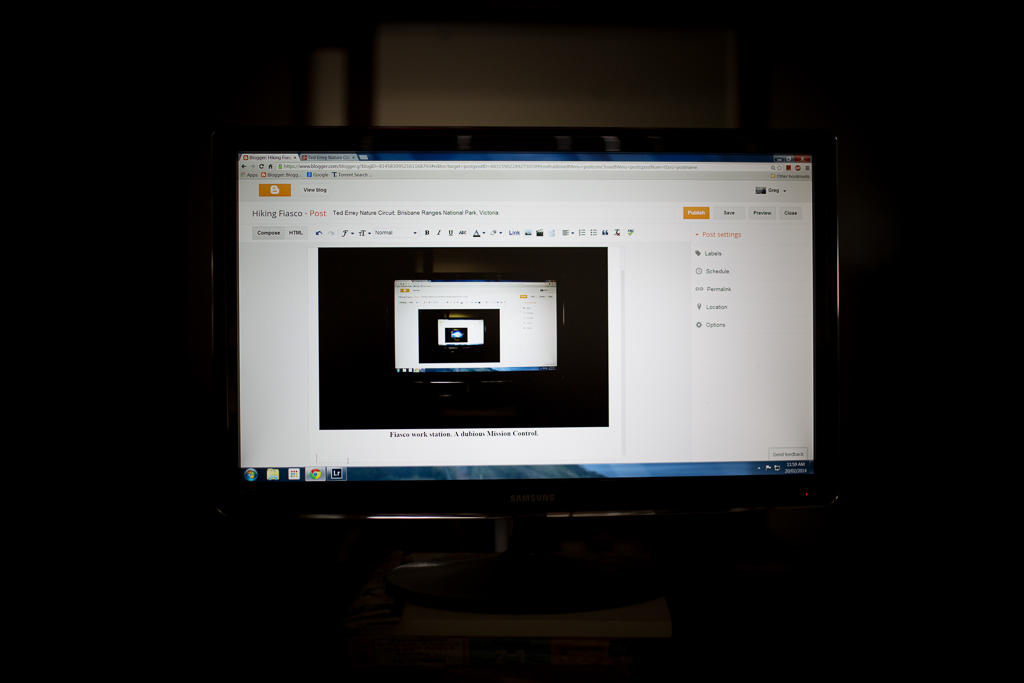 ‘Go retro or get rogered’ – Anonymous.

It’s a saying you don’t hear too often any more, but it’s going to apply for this post. Yes, if you look at the photo of the dubious Fiasco Mission Control, you’ll see what I mean. It shows another look down the tunnel of time to a stroll I did last May. You know what? I actually liked this walk, but it didn’t make the blog back then for one reason. Nothing happened. Oh yeah, the photos weren’t show-stoppers either, so it got filed into the bloated fiasco walk bank.

I know you’re all tossing and turning at night, losing sleep and eating peanut butter sandwiches at an ungodly hour, wondering when I’m going to include something which is remotely current. I’m sure it’ll happen, but even today I had another appointment with the neurosurgeon and the outcome is problematic. Over two years ago I had a cortisone injection in the neck and it was wonderful until January. Suddenly it was back to square dance one. So, a month ago I had another jab and although the bolts of pain are dulled, the non-pain effect is not as dramatic as the previous injection.

Mm… The decision is now to let it run and when it plays up again, which my friendly neuro ‘Ed Gein’ surgeon is confident it will, I’ll have a neck fusion. He did say though, “Can you lose some weight up top? You’re a big bloke and it will be an effort to cut into the neck.” I’m still not sure whether to appreciate his comment or feel insulted.

Anyway, a few day walks with an air-filled light pack are on the horizon, plus there’s a week long jaunt next month, which hopefully will go ahead as planned. Until then it’s just been work and keeping control of an online media empire. Lately I’ve branched out into the odd comment here and there in the Guardian. The results haven’t been great, but one day I’m sure I’ll get an opinion, which will last more than 2.3 seconds before it’s moderated.

Now, the Ted Errey Nature Circuit in the Brisbane Ranges National Park. Remember, it’s a bit of an unusually named park as it’s not remotely near Queensland. Once, someone said to me, “I’m going for a walk in the Brisbane Ranges after work”. I replied, “Good plan”, whilst all the while thinking, “Bloody hell, he’s keen.”

Essentially, all you need to know is there’s some wandering, a hill to climb, then a descent back to the car, followed by some circle work in the gravel carpark before leaving. So, on a cloudless day, I arrived at the Anakie Gorge Picnic Ground, ready to do some walking. At the start, the stroll through Anakie Gorge, whilst following Stony Creek can be quite a popular destination on weekends. Not so mid-week when I pulled up in a cloud of dust.

It was pretty quiet, except for an empty bus, which unfortunately for the long decamped occupants, still had its headlights on. Being a good bloke, I checked it out, but alas, it was all locked up, so the headlights would remain on, draining the battery. I wouldn’t want to return in the early evening and find myself unable to start the car. In that lonely place, I’d be at the mercy of the ‘Brisbane Ranges Butcher’, which is the last thing I’d want. I’m having enough trouble avoiding the ‘Sunshine Slasher’, not to mention the ‘Deer Park Double Penetrator’ and his sidekick, the ‘Ardeer Arsehole’.

Setting off, I’d walked about 3.2 metres before coming to a halt. An enormous tree in the picnic grounds caught my eye and it was just begging to be polarized. 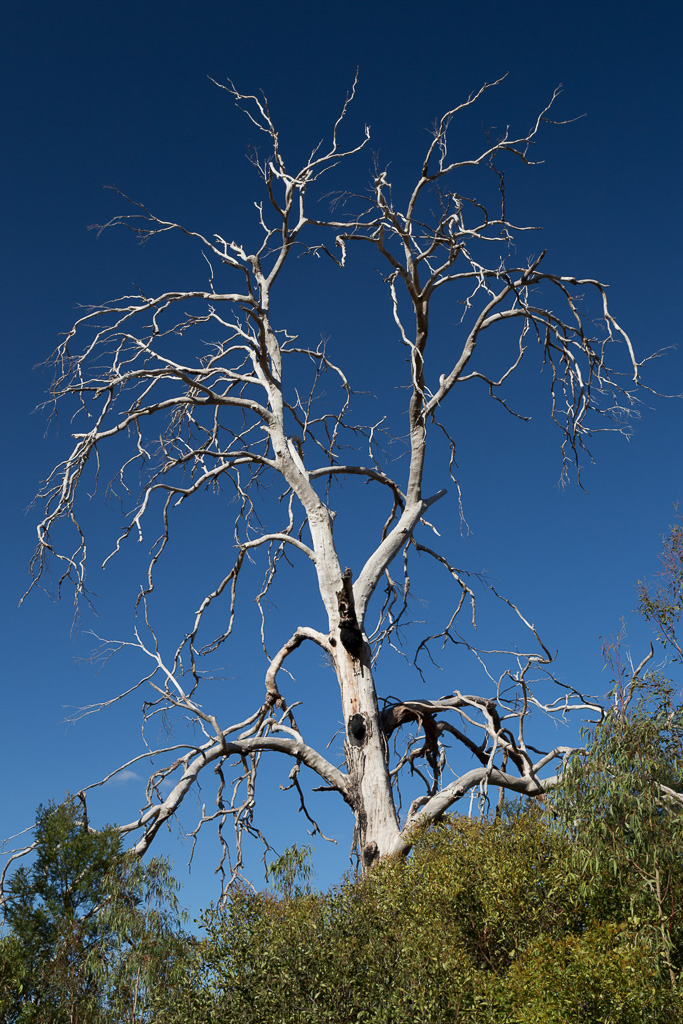 If going there, you can’t miss it. It was so impressive I saluted it, which was way more satisfying than saluting any flag I’d ever seen. After some neck-snapping admiration I continued on into Anakie Gorge. It’s quite a nice spot, but it was a pity Stony Creek was dry as a chip. Waterways without liquid are not the most appetising. I remember thinking I’d return after the spring rains and hopefully see the place looking a bit more lush. Unfortunately it didn’t happen, but it remains on my ‘to jaunt’ list.

The gorge walls make for a feeling of seclusion… 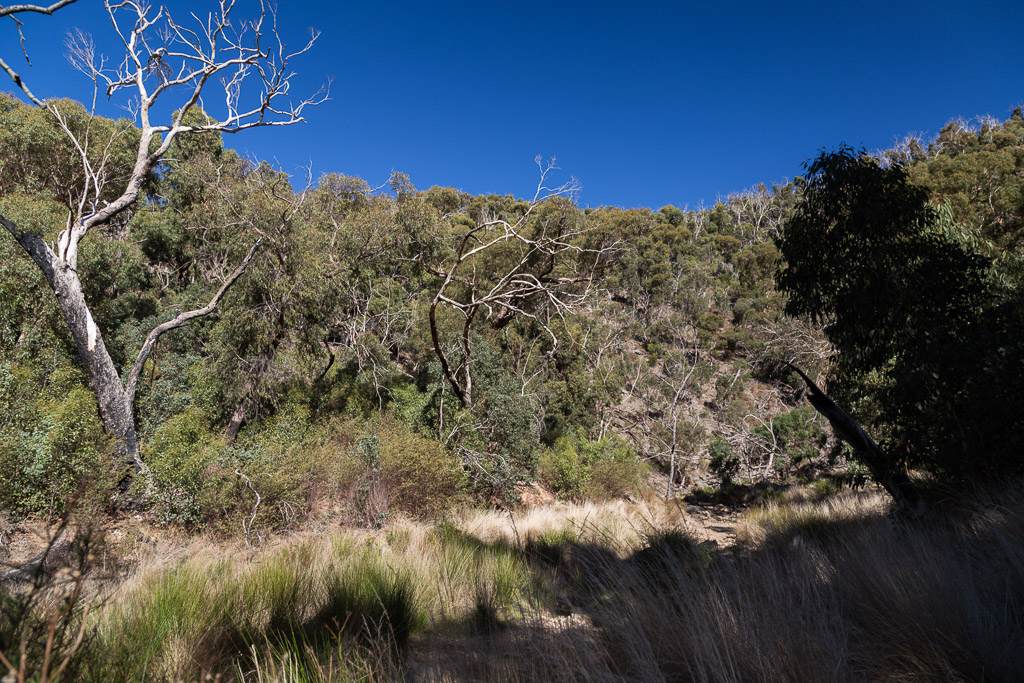 …although I did come across a few punters heading the opposite direction. It was here where I first thought of buying the Canon 100-400mm lens. I spoke to a woman who was geared for bird watching. Around her neck was some sort of weird harness, which supported a camera with what looked like the Hubble telescope attached. It was a beastly lens and I remember drooling uncontrollably when I saw it. Luckily I was wearing my ultra-light, titanium woven hiking bib, otherwise I may have embarrassed myself. As she continued on, I thought to myself, “I need zoom. I need potatoes. I need birds. I need a huge lens!”.

The walking was pretty standard fare, as it criss-crossed Stony Creek. Eventually the track hangs a hard-left before climbing up to the top of the gorge, but I had something else to check out first. What do you think sits at the end of Stony Creek? Well, it’s the Stony Creek Reservoir, of course. It wasn’t far past the climbing turn-off, so I continued on the track. Plastic barricades flung themselves open in fear, as I approached. 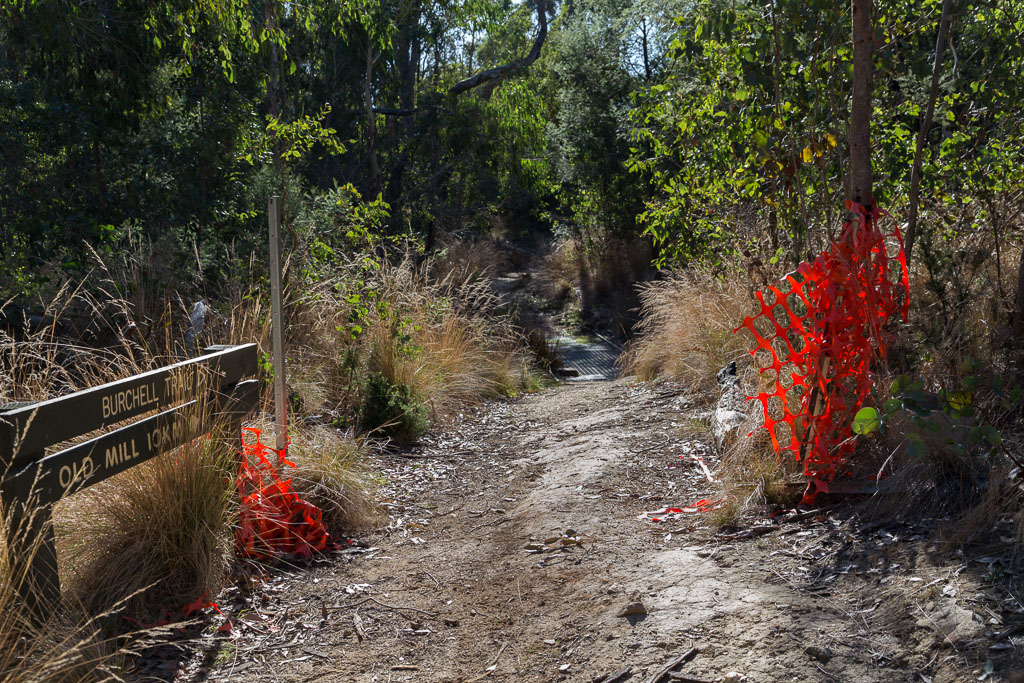 I remained on the path and for some reason I thought the dam would be at the end of the track. Well, it was, but I was looking at the wall, instead of the water bit, which is what I wanted to see. 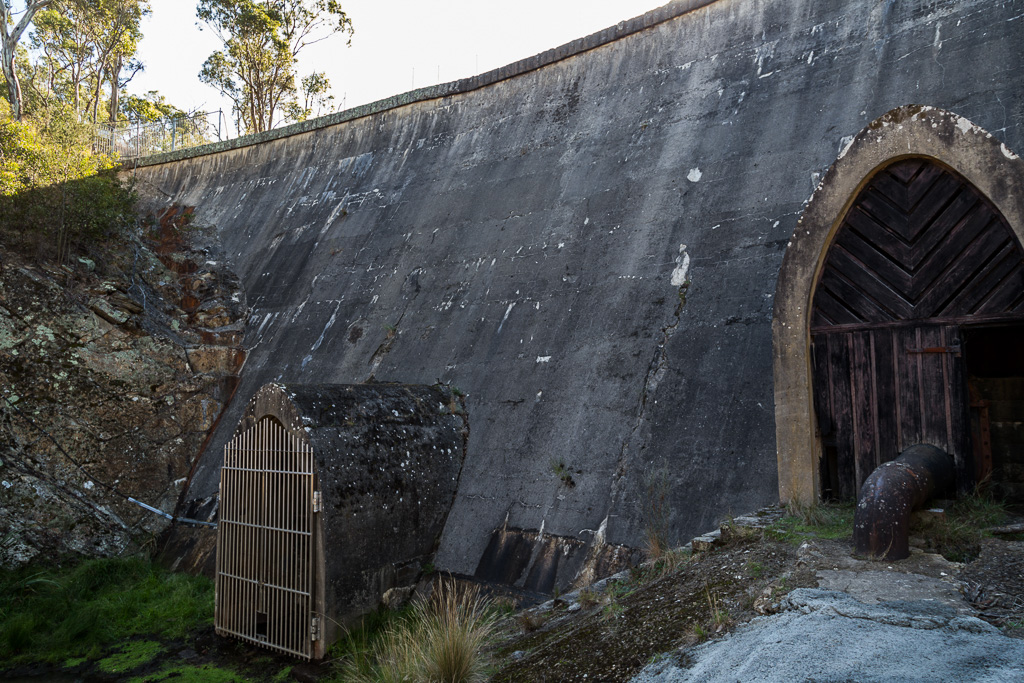 After a bit of backtracking and a climb, I was standing above the dam. How about a history lesson? Courtesy of a direct theft from what’s written on an information sign, did you know, when the Lower Stony Creek dam wall was built between January 1873 and June 1874, it was the first concrete dam wall built in Australia and only the third in the world? Don’t tell me there’s not some ground breaking, wild action going on in Anakie Gorge. It’s the epicentre of world achievement. 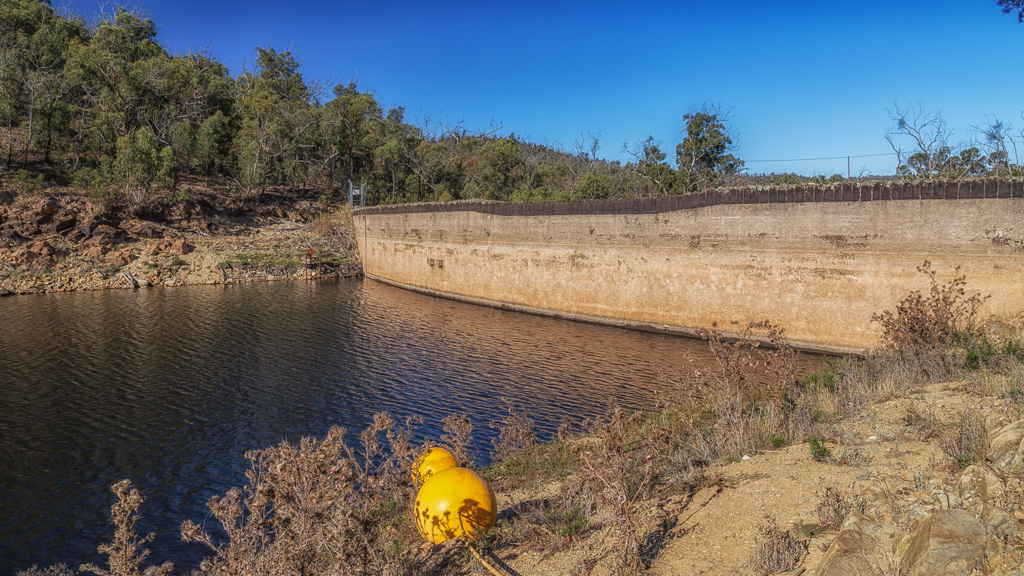 After some dam wall perusal, I moved on, finding Ted’s track again and headed skywards. Actually, the climb out of the gorge was a bit of a ball breaker. The place must have been burned in the last ten years, as saplings lined the narrow, ascending track, creating a hot and humid atmosphere.

I was certainly glad to break out of the bush near the top, although I was in danger of drowning in my own juices. Talk about working up a sweat. I reckon I could confidently nail a ‘World Sweat-Off Championship’. If I didn’t know better, I’m sure my fingernails produce liquid. If you’re dying of thirst in the desert and come across me, feel free to lick the sweat off my back. I can guarantee you won’t need to drink for a week. I can’t guarantee you won’t vomit though.

I’ve got plenty of photos through this climb, but they’re distinctly dull, so I’m keeping them hidden. Mind you, once in open space it was pretty good, as I approached ‘The Outlook’, which just so happens to be a lookout. Talk about trying to trip me up with terminology.

A lone seat with a view across the gorge looked enticing… 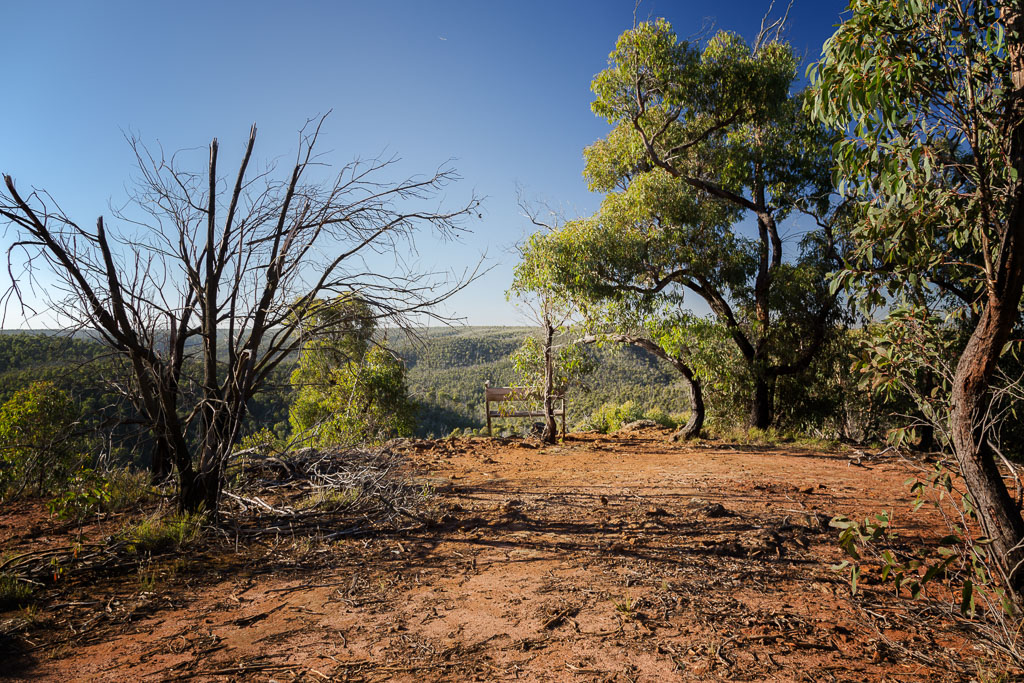 …and once planted, the view was pretty good. 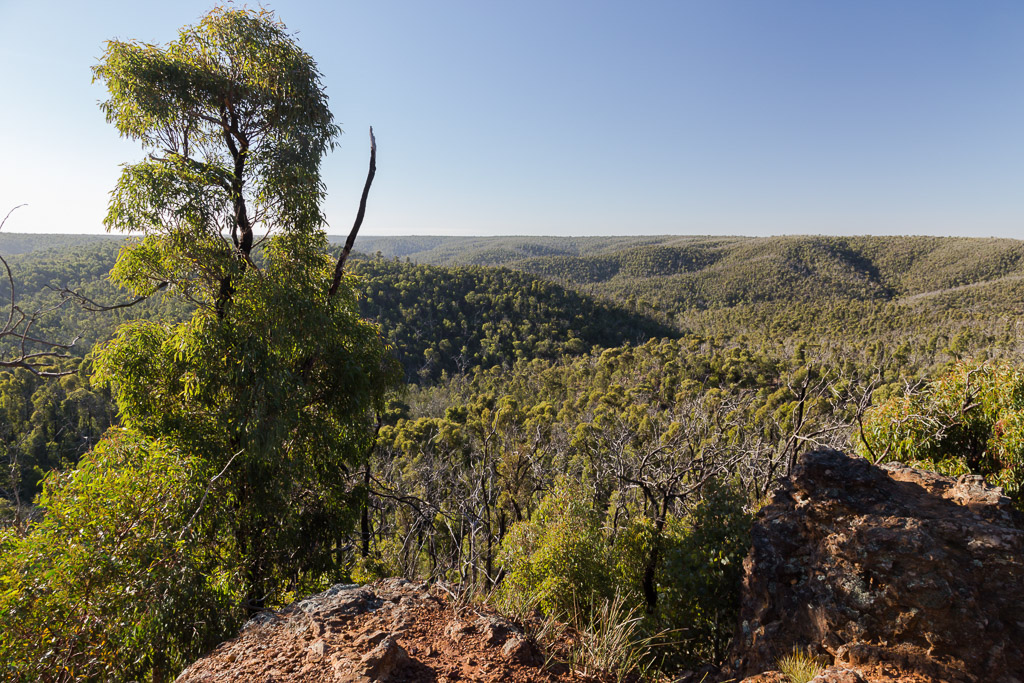 My usual nemesis is never starting a walk early. Up on the Outlook it struck me the sun was a little low in the sky and already, rampant shadow action was happening. I’ll get to some more of that in a minute.

Heading off, I passed dozens of grass trees, which live atop the gorge… 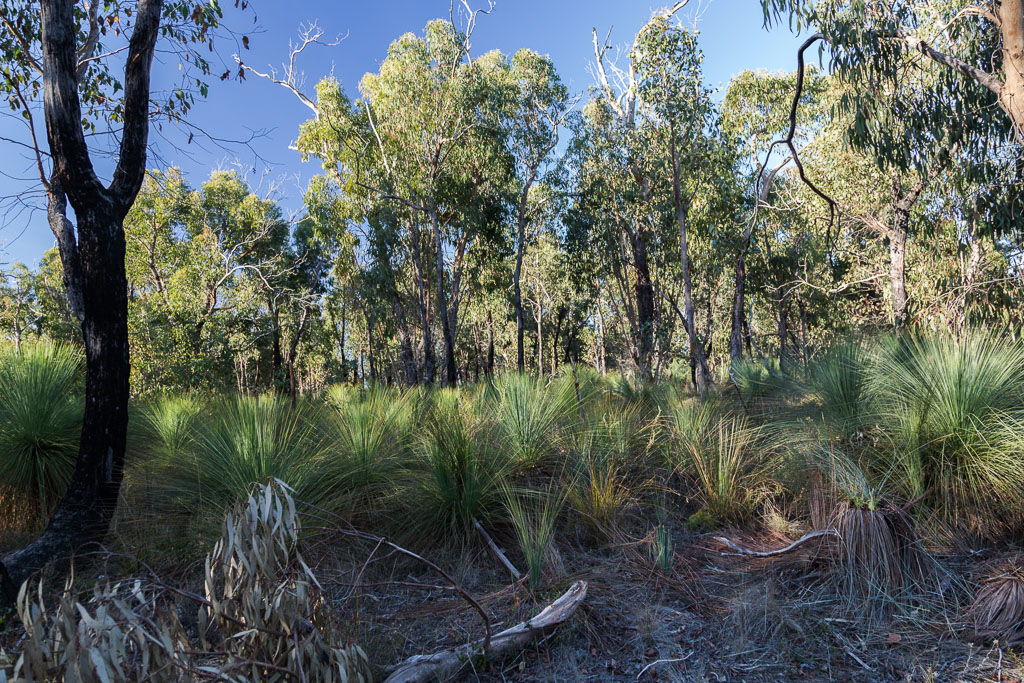 …before coming across an open field with a view beyond. I mentioned the shadows a minute ago, but this was getting ridiculous. There was more shadow than view. 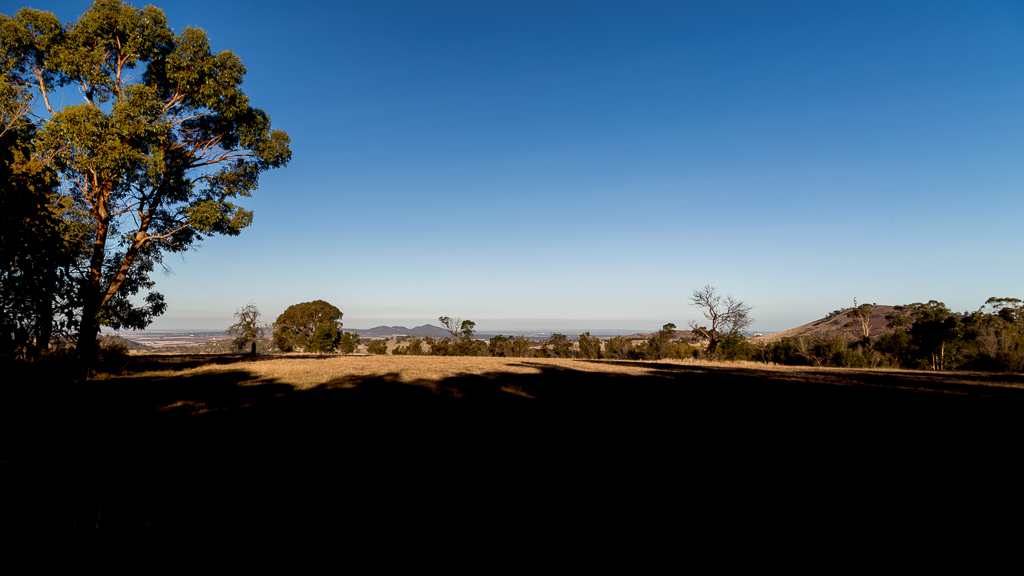 I’ve noticed in the Brisbane Ranges and neighbouring Steiglitz Historic Park, the signs of cinnamon fungus amongst grass trees. I did the right thing when I came across a boot cleaning station with a bit of a scrub… 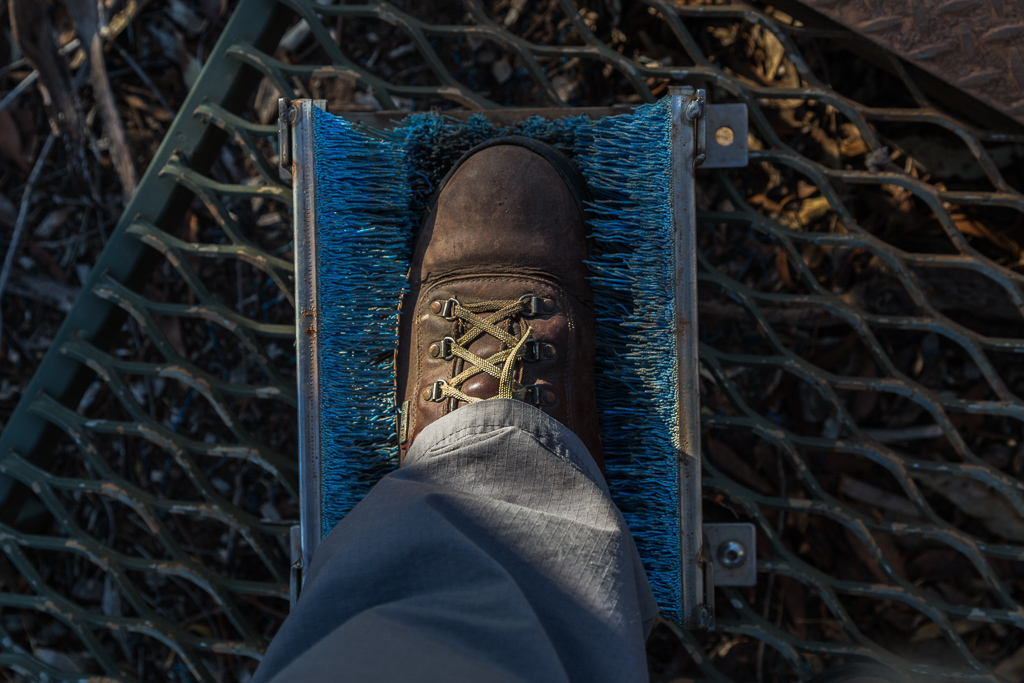 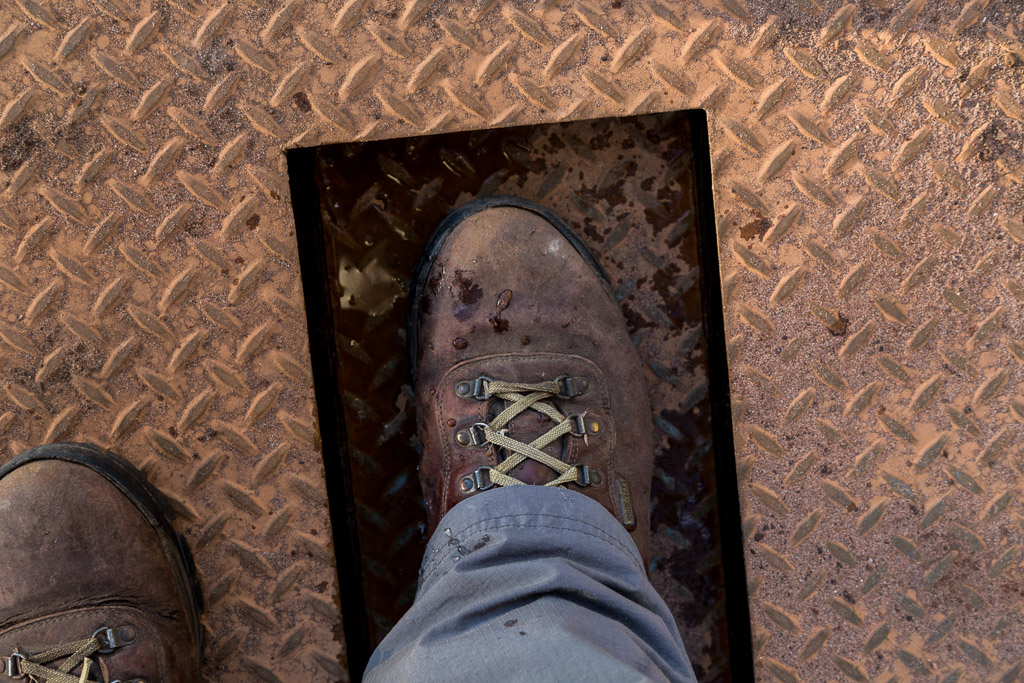 Actually, why am I wearing boots instead of something lighter? Don’t ask me, ask the bloke writing this. Then again, he’s got no idea either.

Under the setting sun, I was moving a bit quicker, but I had to stop when my way was blocked by this wallaby. We had a bit of a stand-off… 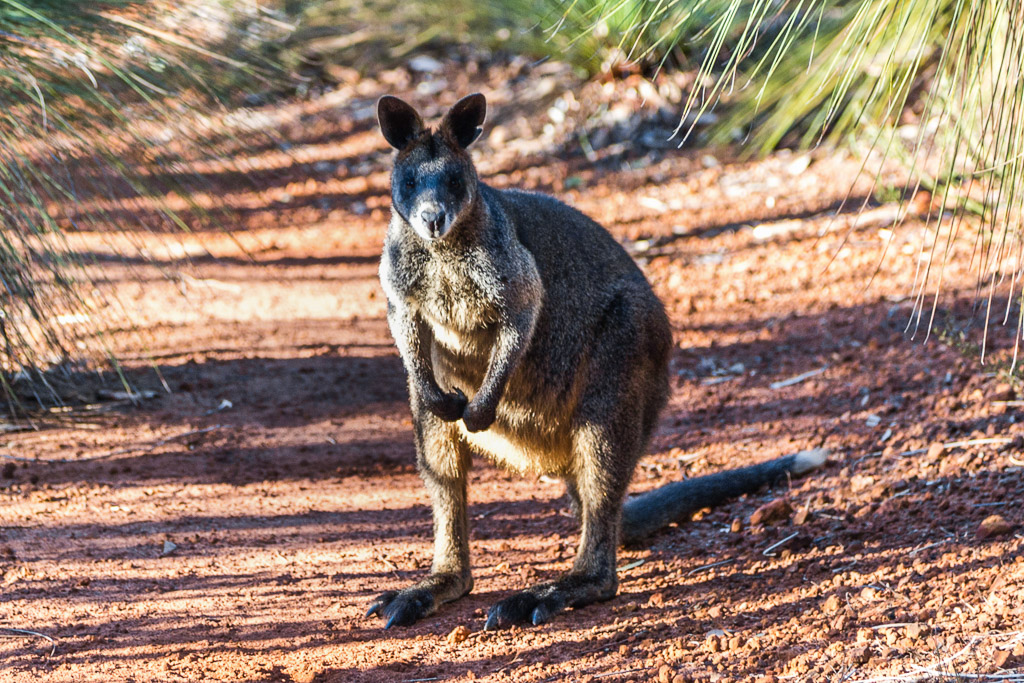 …before he lost interest and moved off the track. 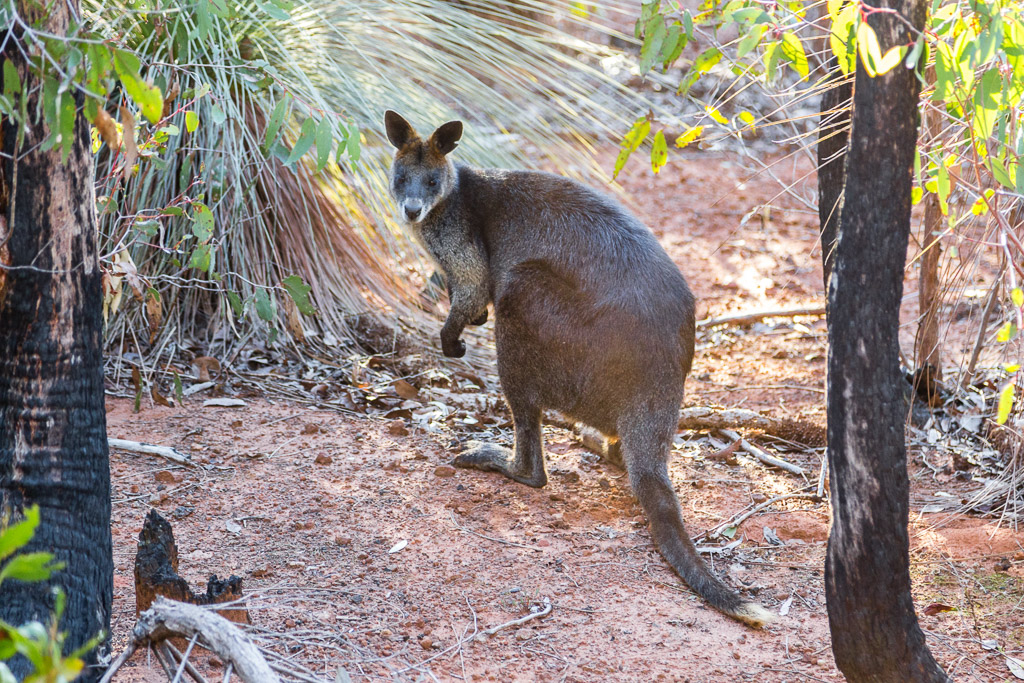 Although moving at a normal humans pace, instead of my traditional sloth-like velocity, I still didn’t want to miss out on any highlights. There were more chairs to see and this one at Nelsons Lookout was in another great spot. 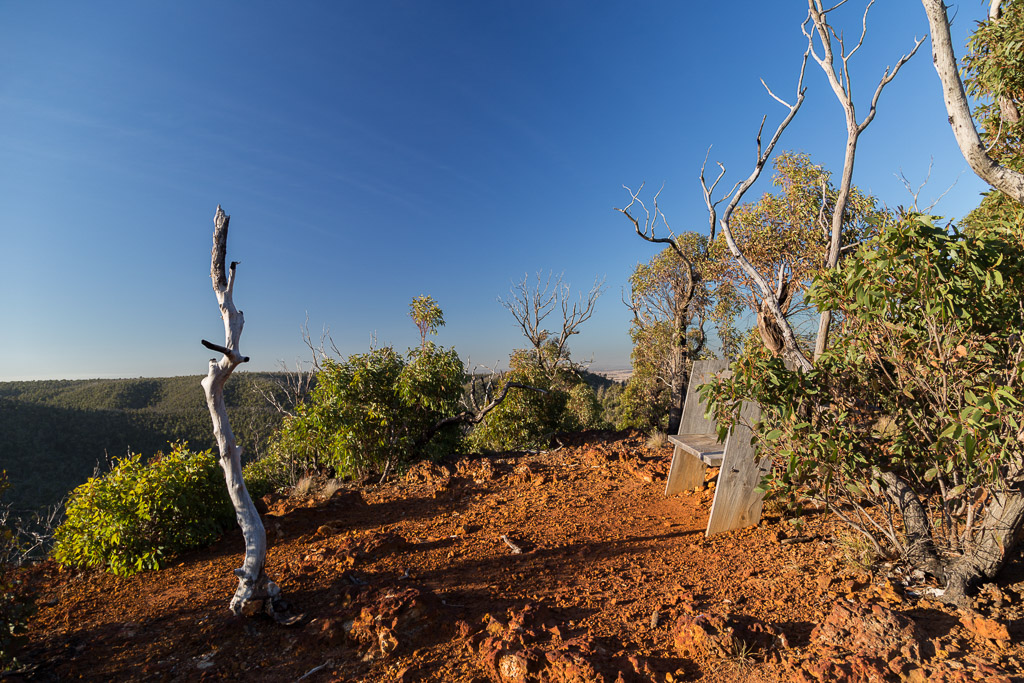 I lay on the seat for a while, contemplating a larger lens in order to examine this bird happily enjoying the glow of the setting sun… 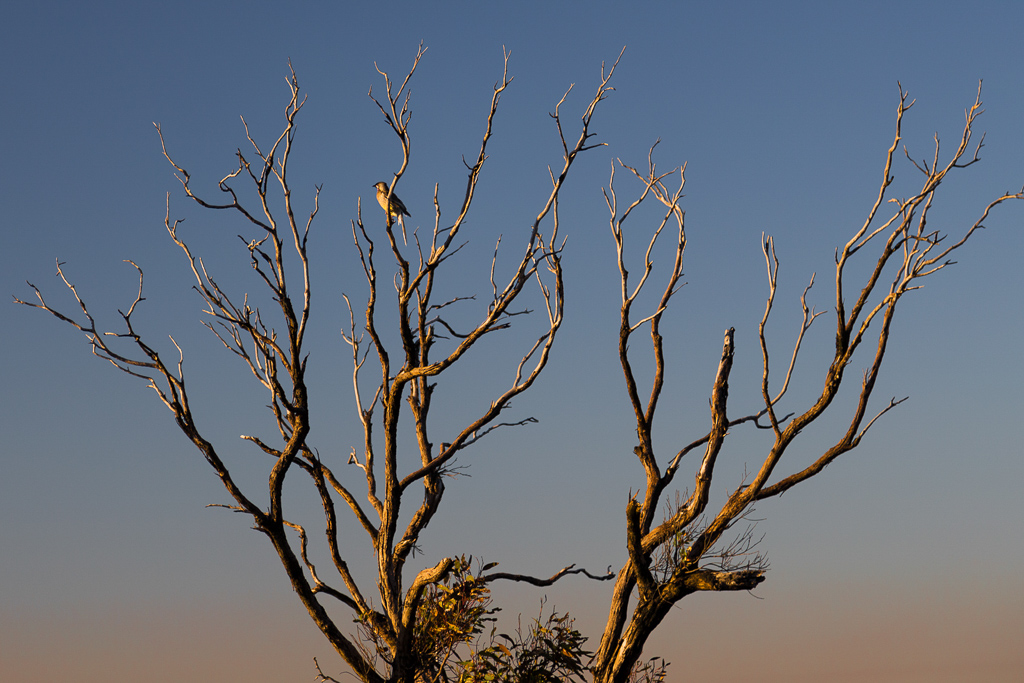 …whilst cursing my failure to bring the lens hood for the camera. Welcome to lens flare 101. 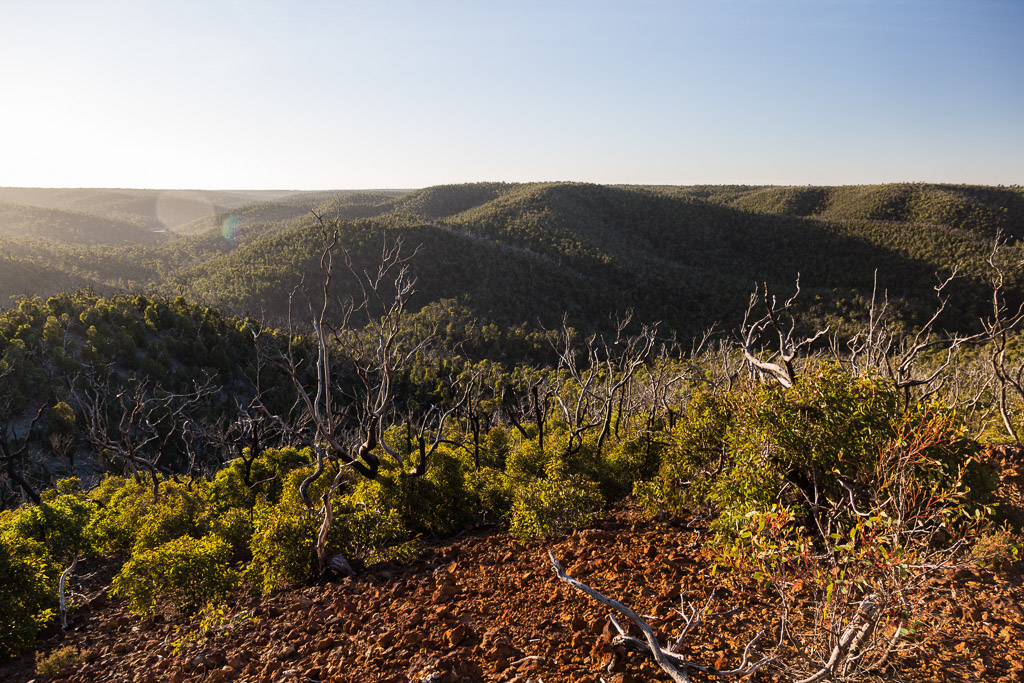 Unfortunately, I had to continue, as I battled the lengthening shadows. As an example of what I mean, check out the next leg stretching photo, which is the closest thing to a selfie you’ll find in this blog. 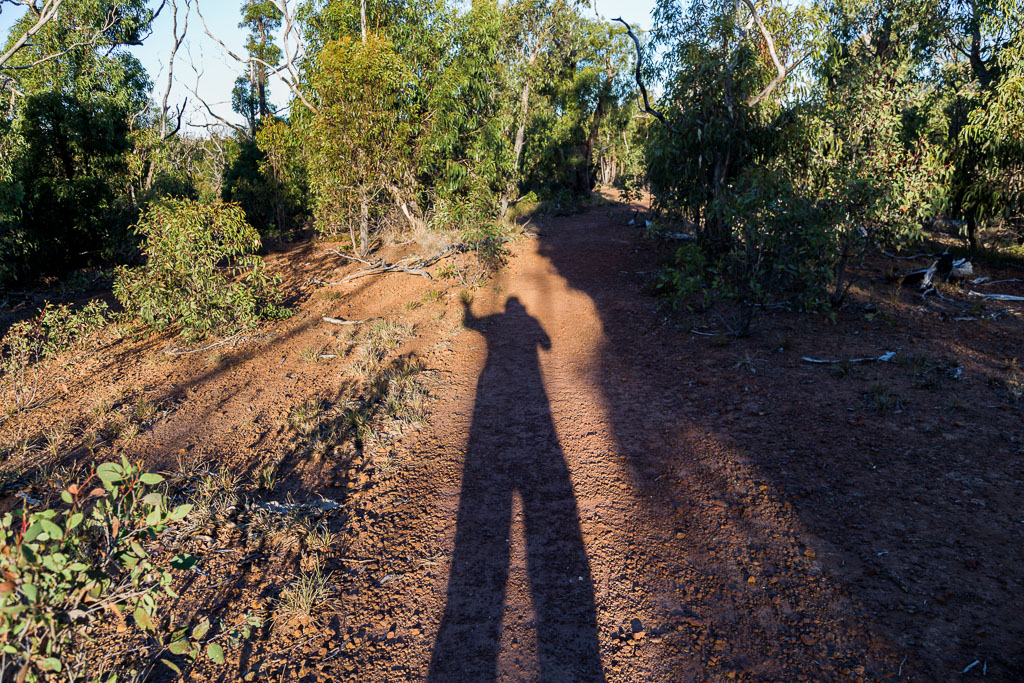 I was nearing the end now with only one more chair to go and the descent back into the gorge. Signs of a previous fire were evident in this fence post, which was still getting the job done… 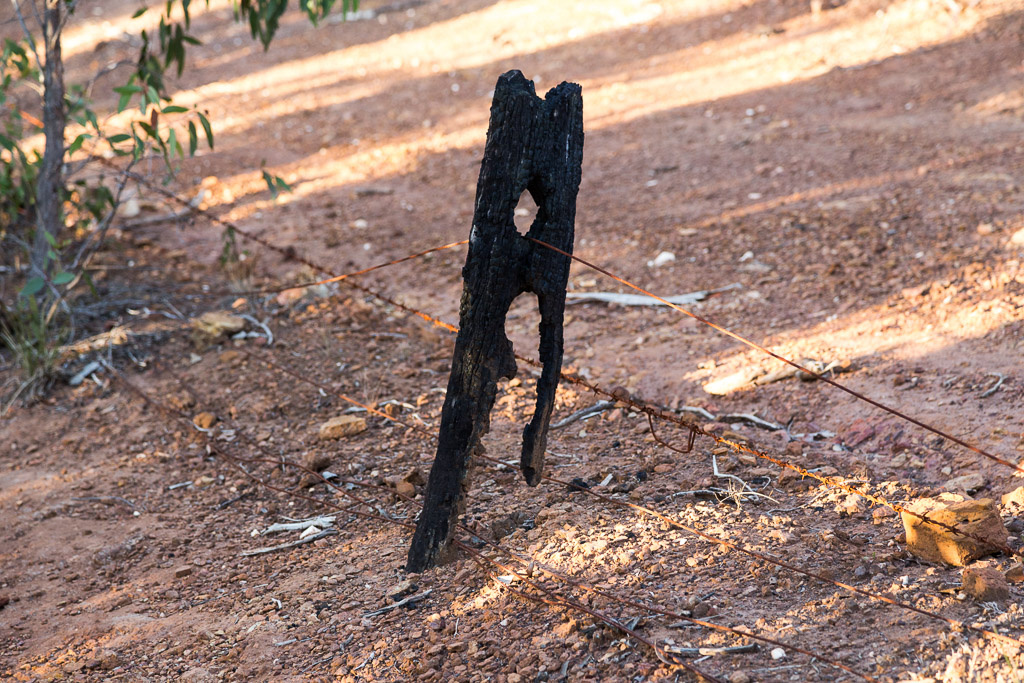 …whilst his mate had given up. 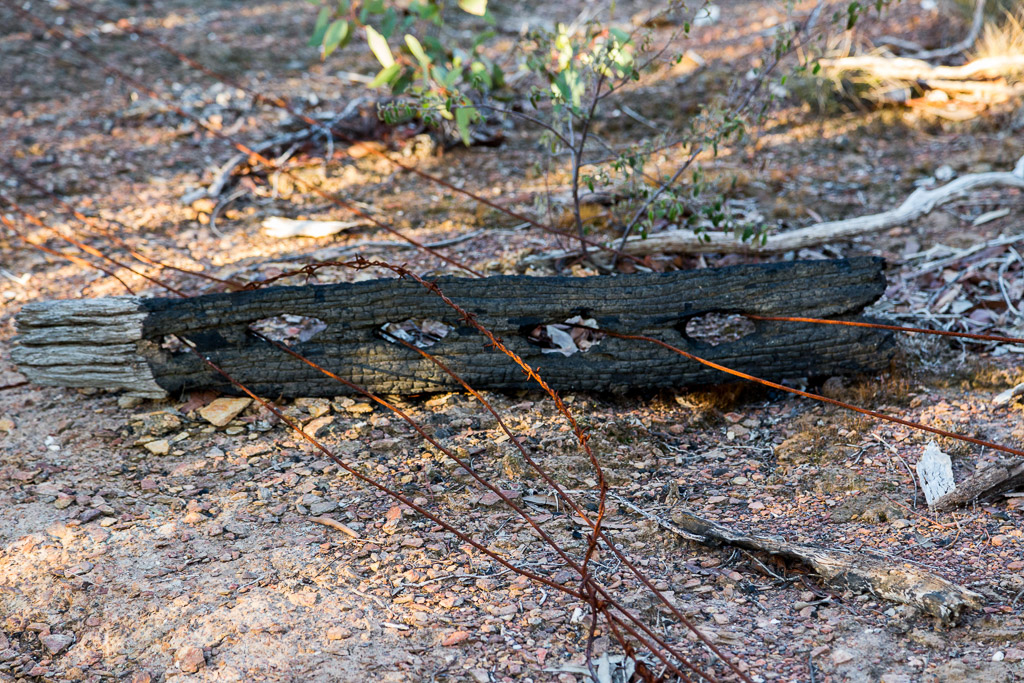 A red wattlebird was taking in the late afternoon sights… 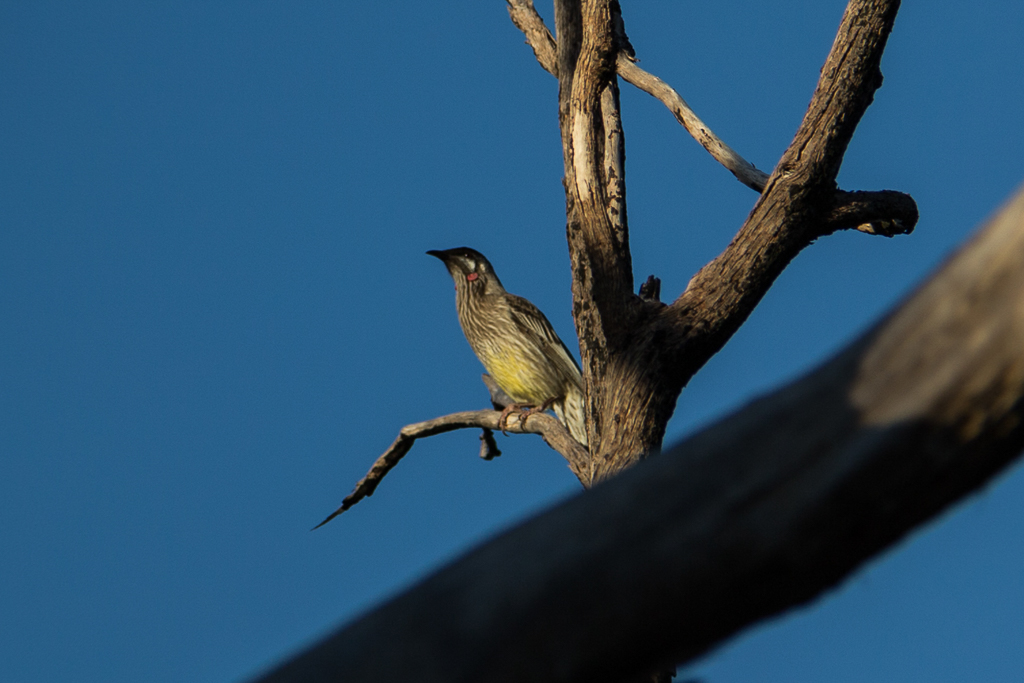 …as I reached my last seat for the day. I’m not even sure if this lookout has a name? Anyway, the vegetation was blocking the view and I really didn’t have the time to relax, so it was a flying visit only. 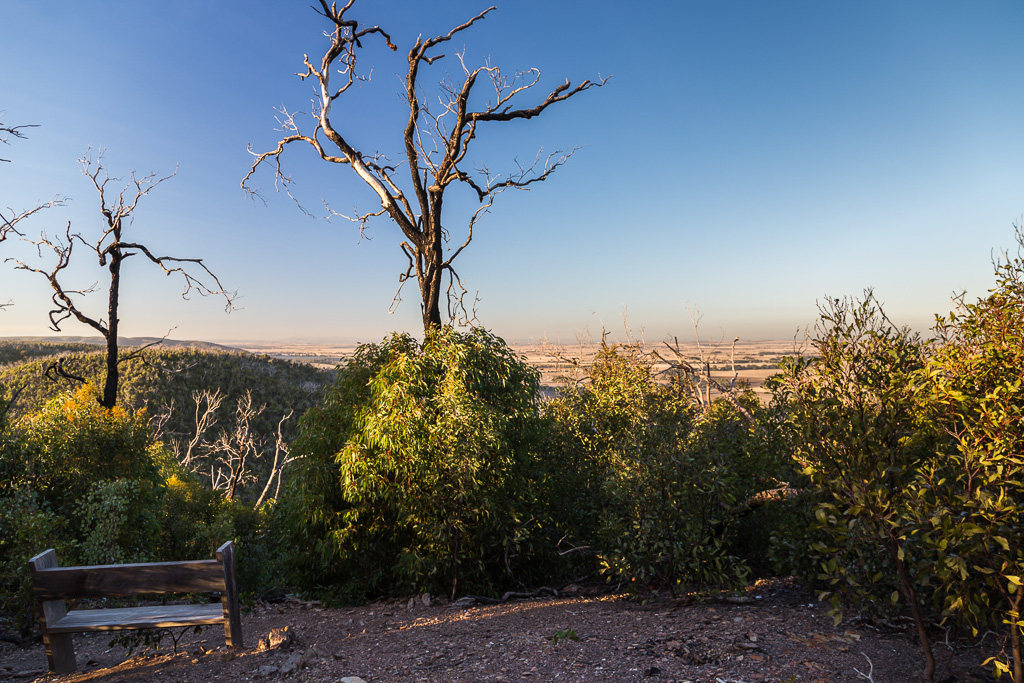 Then I was heading down a fairly wild descent, where I was struggling to stay upright. My boots may have a Vibram sole, but they’re so worn, it’s like I’ve got a pair of slicks on my feet. 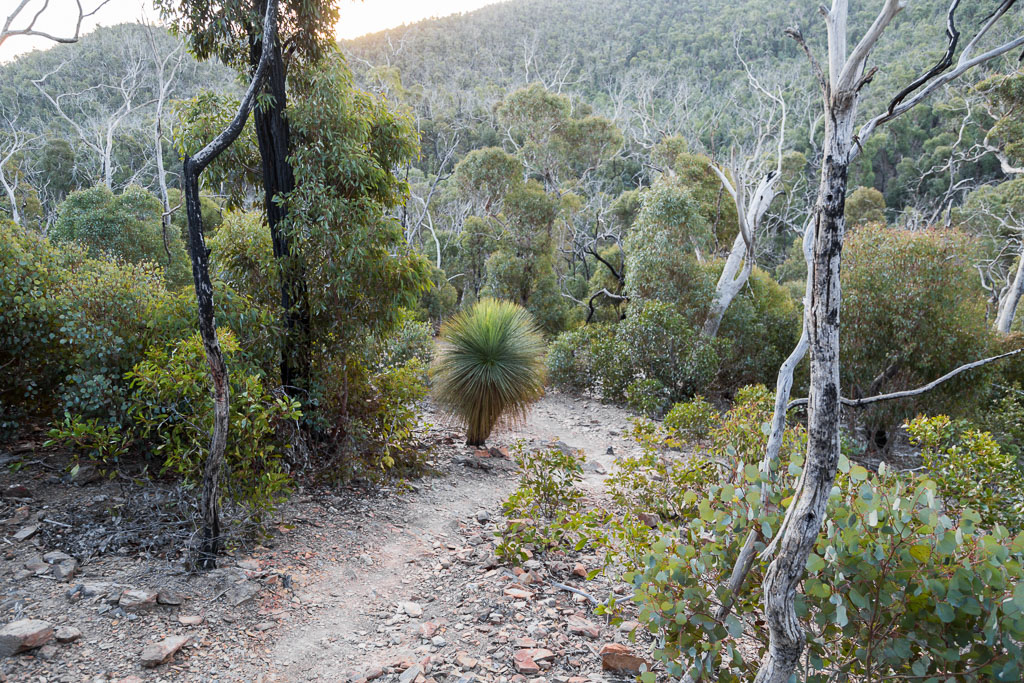 My aim of reaching the bottom of the gorge by sunset was accomplished and now it was a matter of strolling along Stony Creek, back to the car.

Oh yeah, if I’d only pondered the idea of buying a larger lens, it was well and truly confirmed, as the next pictures show. A robin on a tree branch looked good. If only you had binoculars for glasses. I mean, come on, what sort of crap is this? 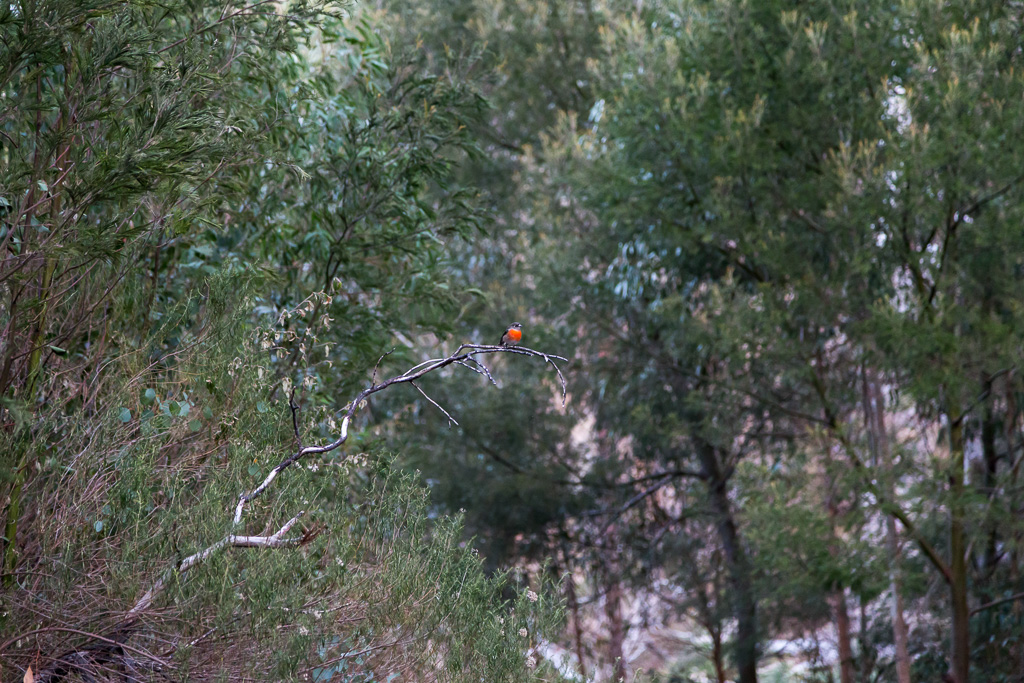 Robin on a tree branch. Somewhere.

Yeah, I can go the crop of the century, but all I get is a soft image. 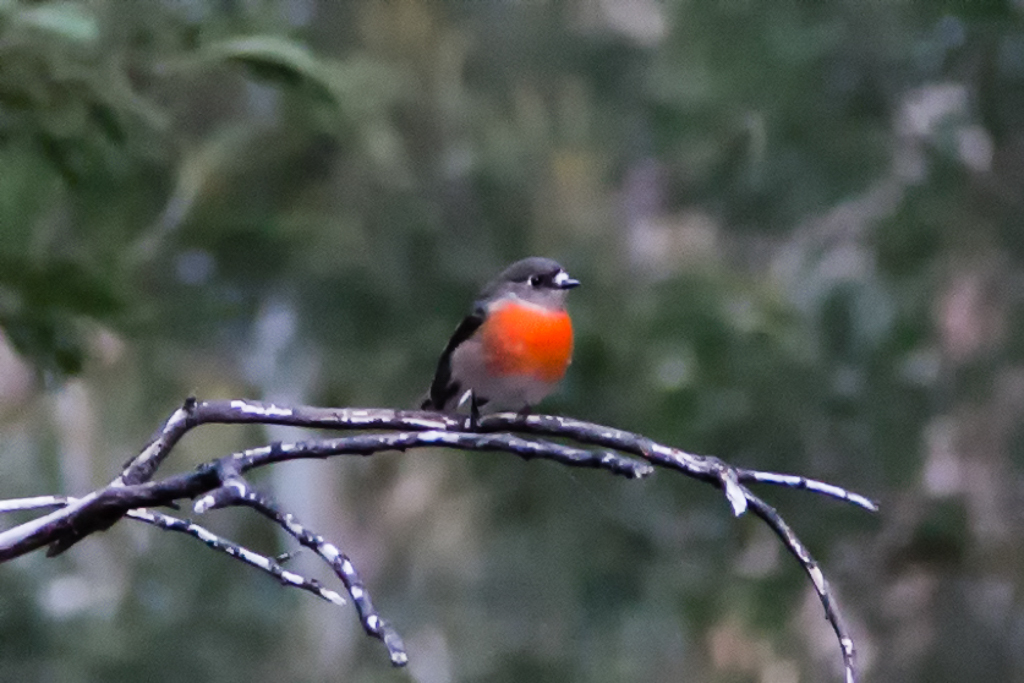 After that frustration I was back at the carpark. The bus was still there, but the headlights were now extinguished. Either some punter had remembered or the battery was now flat. If stuck, they probably wouldn’t last a night with the ‘Butcher of the Brisbane Ranges’ roaming.

There you go. Another walk written about. It’s a good one as well and I must tackle it again in spring. What else? I’ve no idea. I had something else to mention, but I’ve forgotten, as I’ve been side-tracked by the cricket. If I remember, I’ll include it in the next post.

In finishing off. Remember the polarized tree at the start? It was looking a little more sombre when I left with light fading fast… 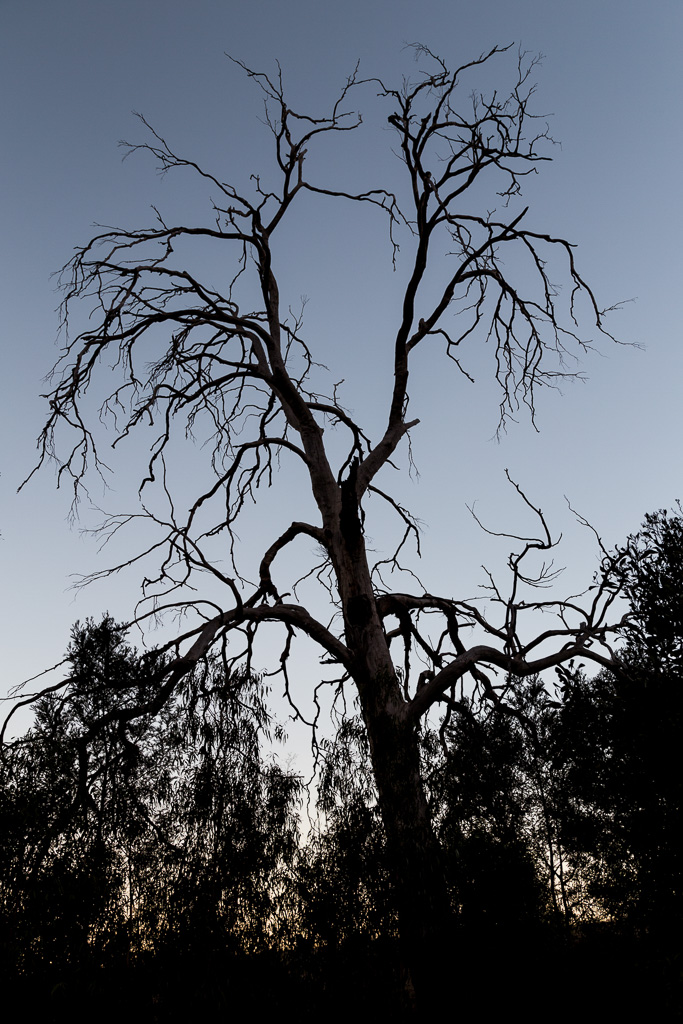