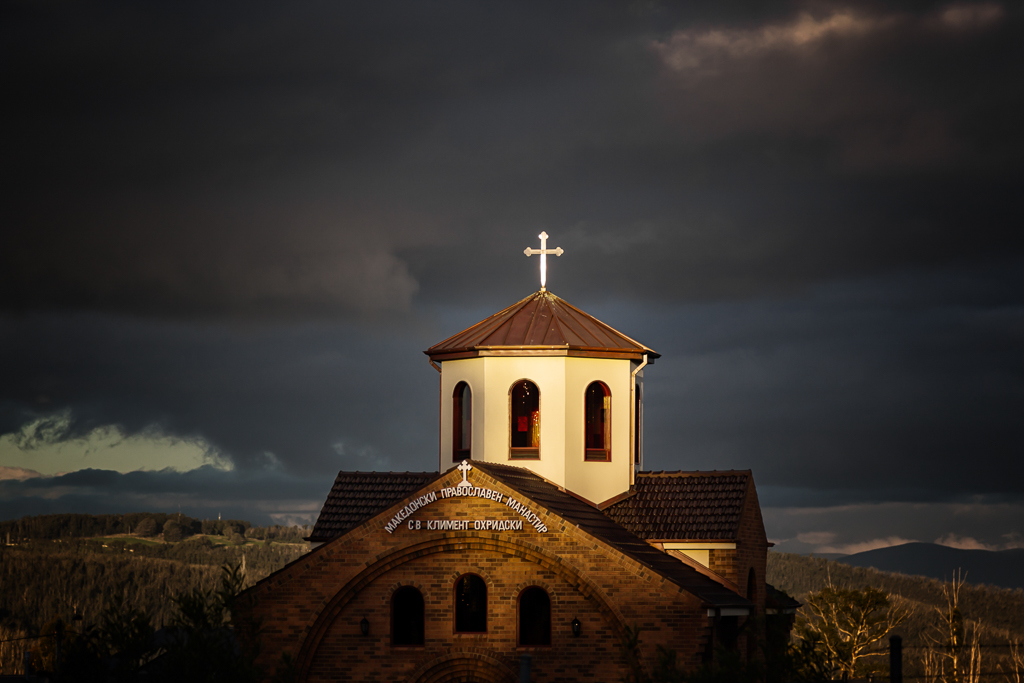 ‘There is a crack in everything. That’s how the light gets in.’

Where am I now? It’s July last year and on a wintry day full of showers and sporadic sunlight, I ventured up to an old walking haunt around Masons Falls, Kinglake.

First things first though. I’ve thought a few times how to write this post, as I have mixed feelings about it. In order to explain, you’ll have to put up with an elongated background story.

If I think about it, Mount Sugarloaf and Masons Falls, which is linked by the Running Creek Track, was my most visited outdoor area over a ten year period. This was back in the 1990s. Back in my running days, I’d regularly visit to go for a run in the bush, as a change from my usual sobering jogs in suburbia surrounded by roads and traffic.

It was always good and without fail, quite painful. Running anti-clockwise, the final climb up Mount Sugarloaf was a bit of a beast. In winter, the cold air would shred the lungs, as I gasped my way up trying to run as far as I could before having to stop. In summer, I’d carry a water-bottle and be empty before halfway.

My fastest circuit was run during torrential rain, where I remember sloshing through cascades of water running down numerous gullies. A long descent ended alongside Running Creek and then passed through tunnels of enormous ferns, which enveloped the track and careful steps were needed on the muddy and mossy ground underneath.

You know what else? On nearly all my sojourns there, I only saw a handful of people, but on most occasions I had the entire place to myself. Once I was mortified to see the walk written about in The Age newspaper. Huh? Do I have to share?! Following this, I’d see the odd punter, but that soon dried up once the weather turned colder and I was free to trot along on my own.

Then as my knees started to pack up and the running reduced, I didn’t get there too often. I’d also moved further away, so the resultant long drive was never very attractive. Mind you, once the running stopped, I tried my hand at cycling for about five years. Where was one of my 100 km rides? Well, up to Kinglake of course. I’d cycle into the park and ride up to Mount Sugarloaf, before returning.

In winter it’s bitterly cold up there and I remember feeling the air temperature change, as I made the manic downhill ride back into Whittlesea. Oh yeah, I didn’t see a lot of those winding descents, as the wind would whip around my riding glasses, causing tears to form. All I’d do is hang on and tell myself not to crash, as this was the spot where I reached my fastest speed ever on a bike. 83 kph.

I always thought of revisiting for a walk, but all that was put on hold in 2009. Weather, for the first time had given me the jitters during that hideous summer. Watching the news, I remember being slightly stunned when the next three days were forecast to be over 40 C. I’d never seen that before in Melbourne and I wondered, just what was going on with the weather?

It continued of course, with barely a let up, until a week later and that mind bogglingly day of 46.4 C was unleashed. I was at Epping during the day and I remember seeing smoke up north. It wasn’t just any old smoke though. It was absolutely massive and as I drove home later in the day, I was listening to ABC radio describe the fire, which would become known as the Black Saturday bushfires.

A merging of fires created a conflagration, which steam-rolled across the landscape. A late wind change sent the fires at a fearsome speed straight through Kinglake and beyond.

That evening I was lying on my bed in stifling heat, listening to the radio and three things stick in my mind. Firstly, there was utter confusion. The announcer proclaimed the Kinglake residents were under threat and to enact fire plans. At the same time they took a call from a bloke who said he’d escaped the flames, but added he was positive a lot of people in his street hadn’t. It wasn’t the words he said, which gave a sense of what had occurred. It was the panic in his voice which was unsettling.

Warnings were still being given on the radio, but the fire had already gone through, razing Kinglake. As the night dragged by, the first reports came in of casualties, with an announcement of at least 30 deaths. I remember thinking how high the toll was then, with no concept it would end up at 173.

It was months later before I ventured up there. Roads had reopened, so I thought I’d drive up to get a sense of what occurred. It was an uncomfortable feeling though, and I felt like I was intruding. At times I didn’t want to look out the windows. It was a matter of quick glances and a desire to get out of the place. Tree covered hills, formerly blocking the view beyond the immediate rise, were now laid bare. Burnt stumps as far as the eye could see, with rolling hills visible for miles. It was if I entered an alternate world. The hills were in the same spot, but it wasn’t the same place.

The areas I used to walk were wiped out and whilst being rehabilitated, the park was closed for a number of years. I always wanted to return, but had no idea what to expect. Eventually last year it reopened, but it still took a number of months before I made it up there on a cold winters day.

What did I find? I planned to park my car in the same area as always. At the entrance next to the Parks Office. At this time of the year though, the entrance gates are closed at 5pm, so not knowing how long this stroll was going to take, I left my car outside and walked in.

Immediately inside the entrance was the office building, but I knew it had been razed. I’m not sure why, but I assumed something else had been built in its place, so I was surprised to see an empty block of land where it once stood. Deciding to walk clockwise, I headed off along a path with my first stop being Mount Sugarloaf.

There’s no great climbing involved to get there, so it was easy going along a winding path amongst fire regrowth. Thick walls of green saplings hugged the track, as it gently rose to the flat peak. I crossed the road within the park and the track brought me to an elevated spot, so I could see through many bare trees which remain. 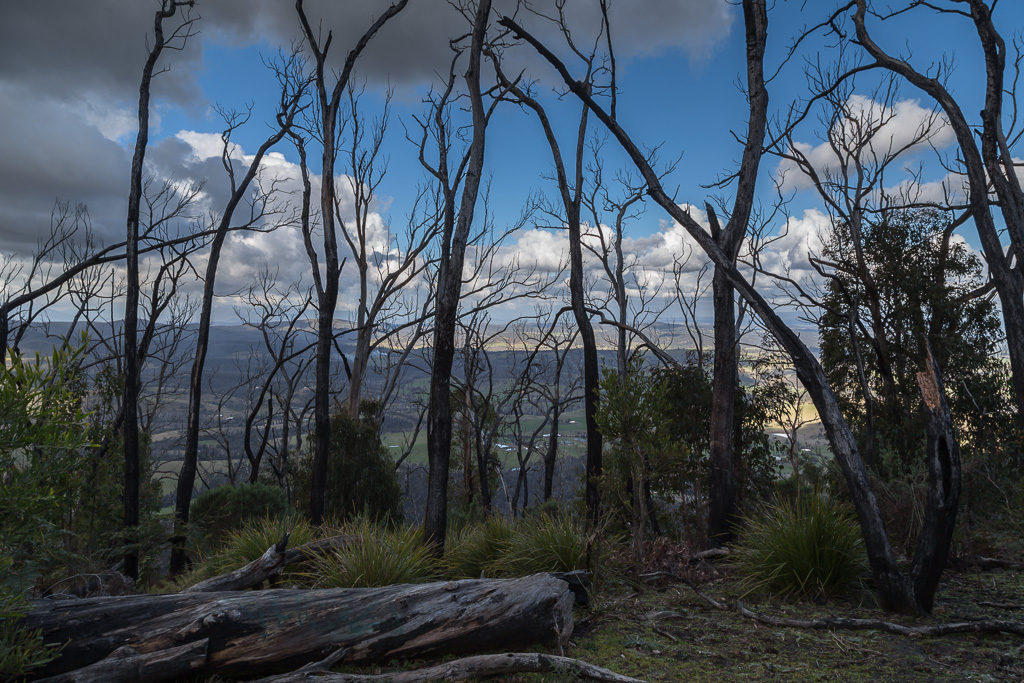 Due to vegetation, there’s never really been any views from the top and this is still the case. A couple of gaps though, did give me an opportunity to see green fields below… 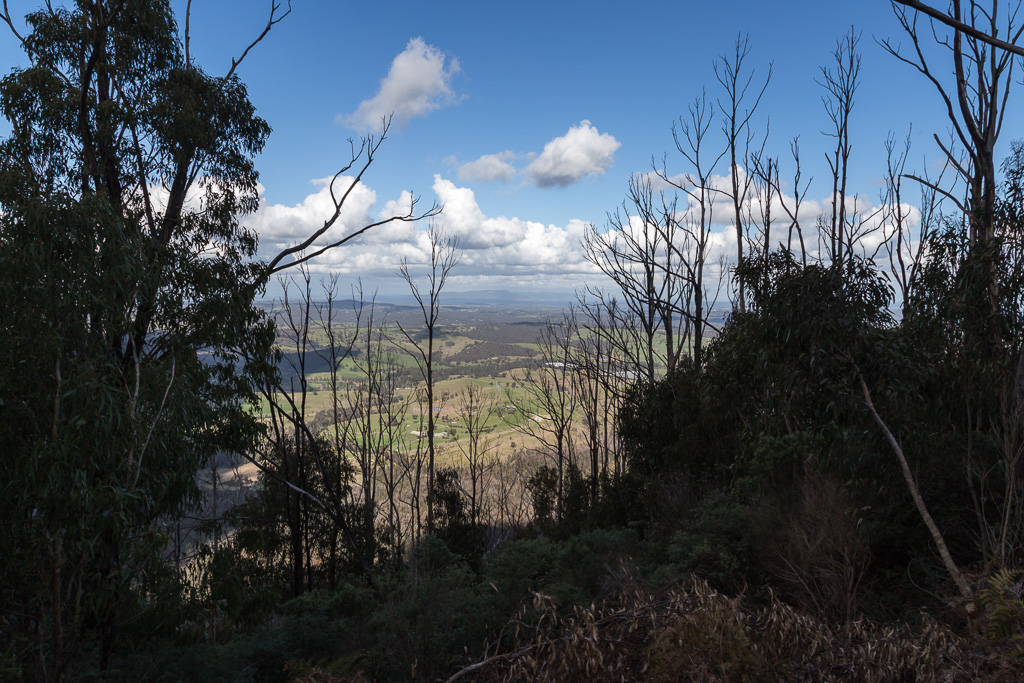 …before leaving and walking along the road towards the track which would lead me down towards Running Creek. 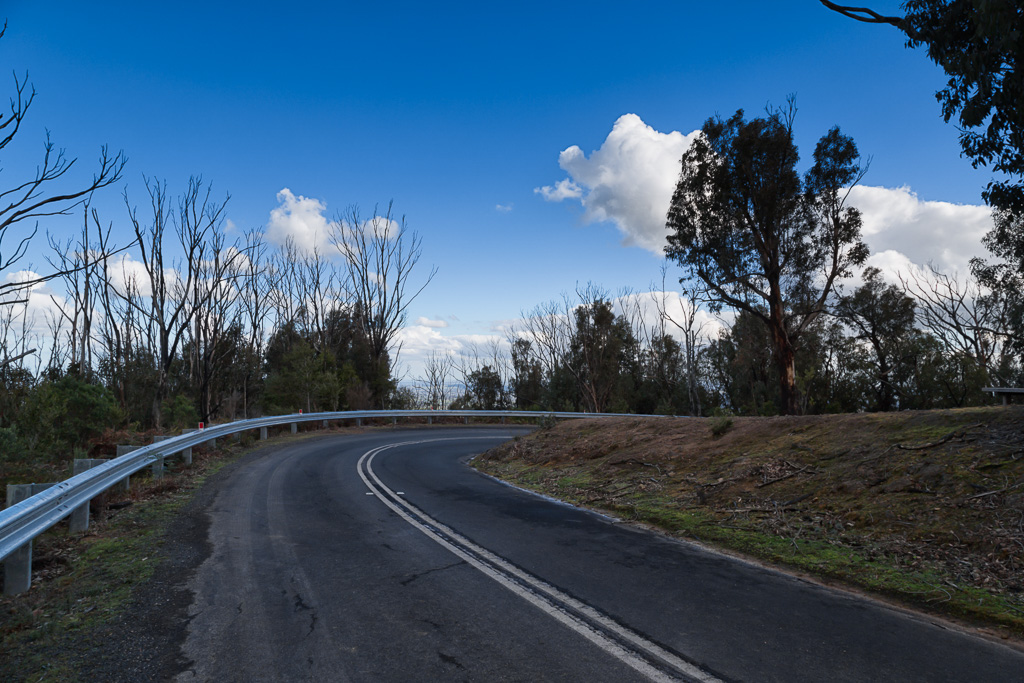 I’d started in light rain, but it cleared whilst I continued down the empty road… 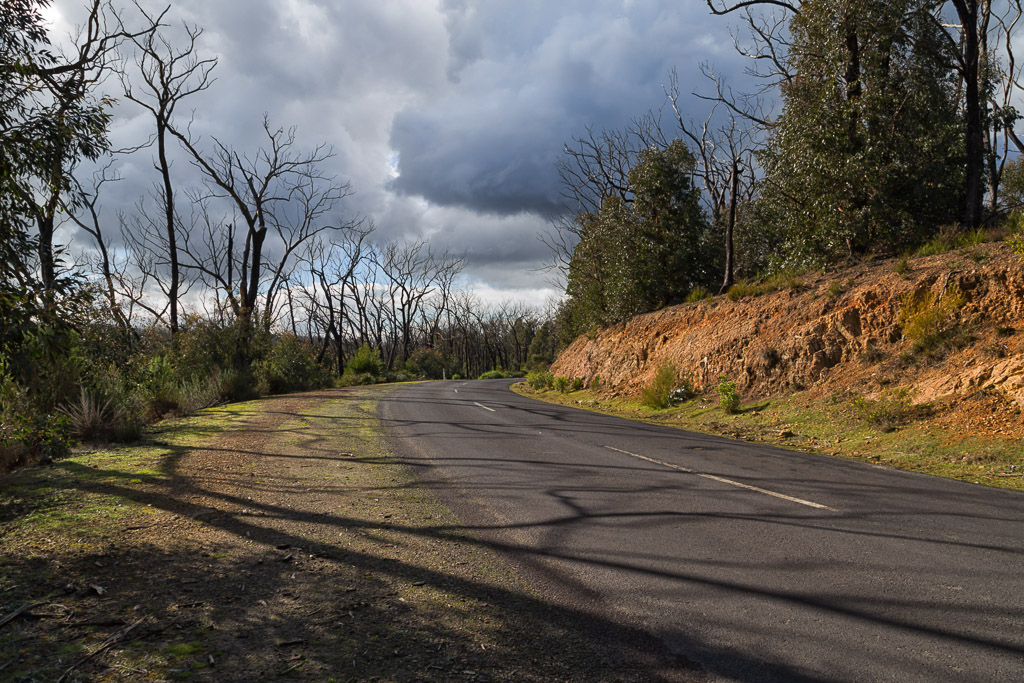 …and enjoyed the weak winter sun. 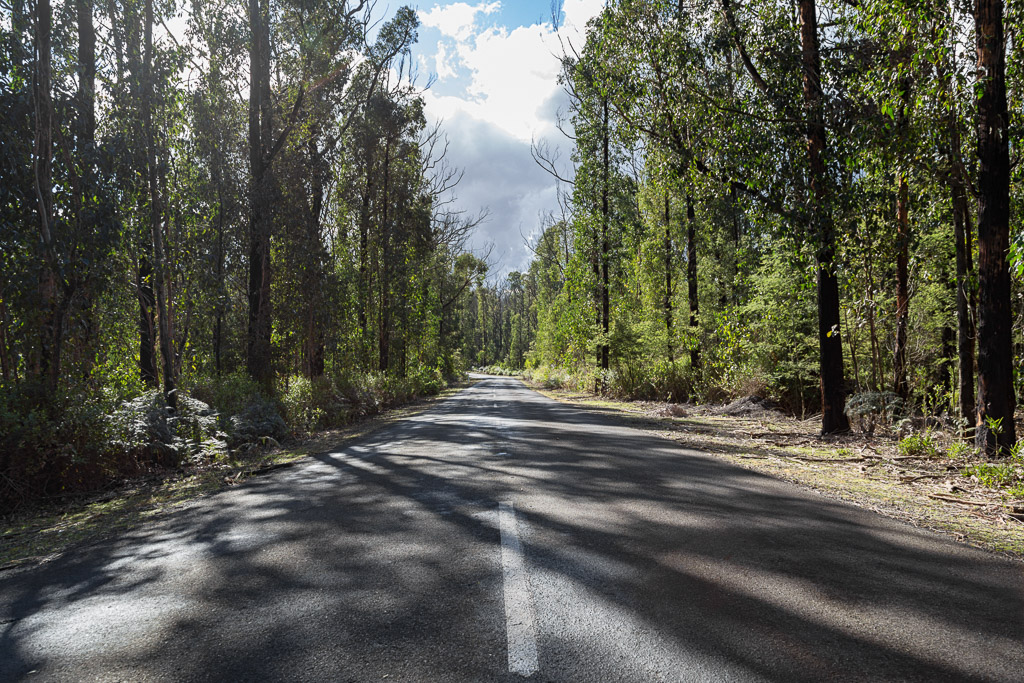 Leaving the bitumen, the track was as I remember it. A fairly steep drop down the sides of Mt Sugarloaf. Amongst the saplings, I found few photo opportunities, although these fungi on a burnt tree trunk were colourful. 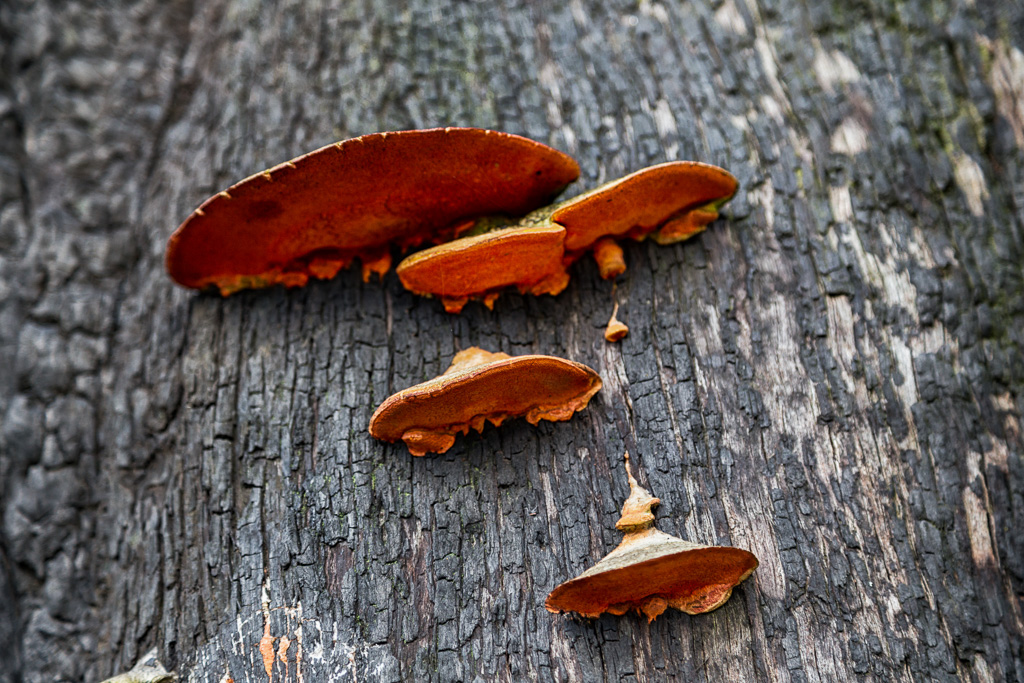 During the descent it was apparent the track was nothing like I remember. It followed the same route and had the same corners, but that’s about it. The small gullies where torrents of water would cross the track have been gentrified. Now, huge pipes sit below… 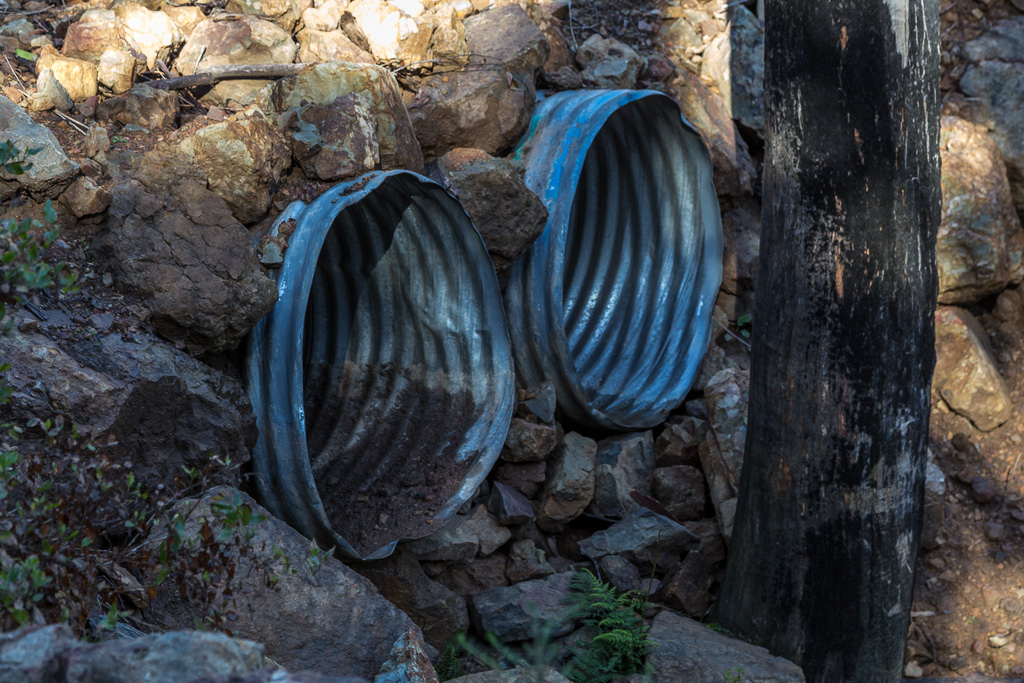 …and the track sits above, creating a level surface. 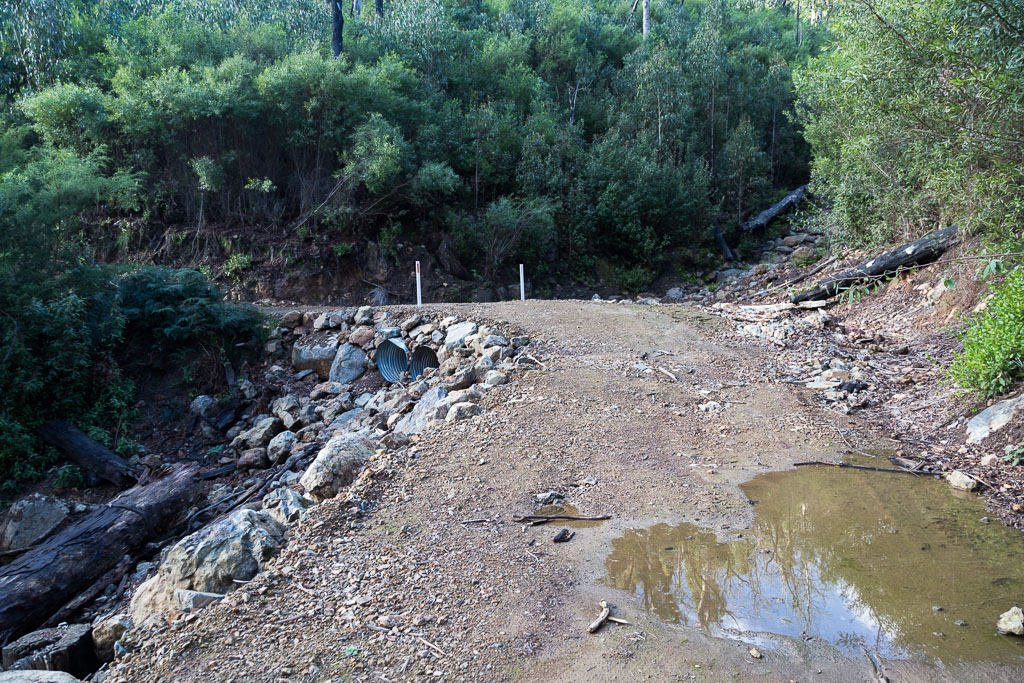 In the past I’d come across the odd Park vehicle out on the track. It didn’t hinder the isolating feeling though, but I didn’t feel that any more with the wide, flat surface. 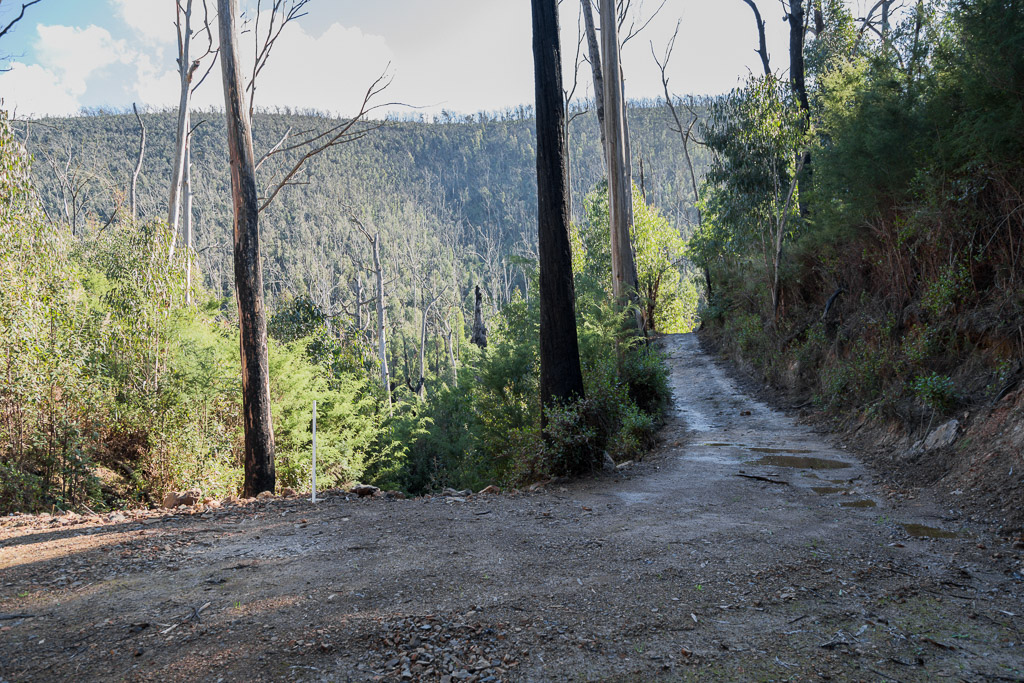 …whilst taking photos of stark, white eucalypt trees, as they towered above the green regrowth. 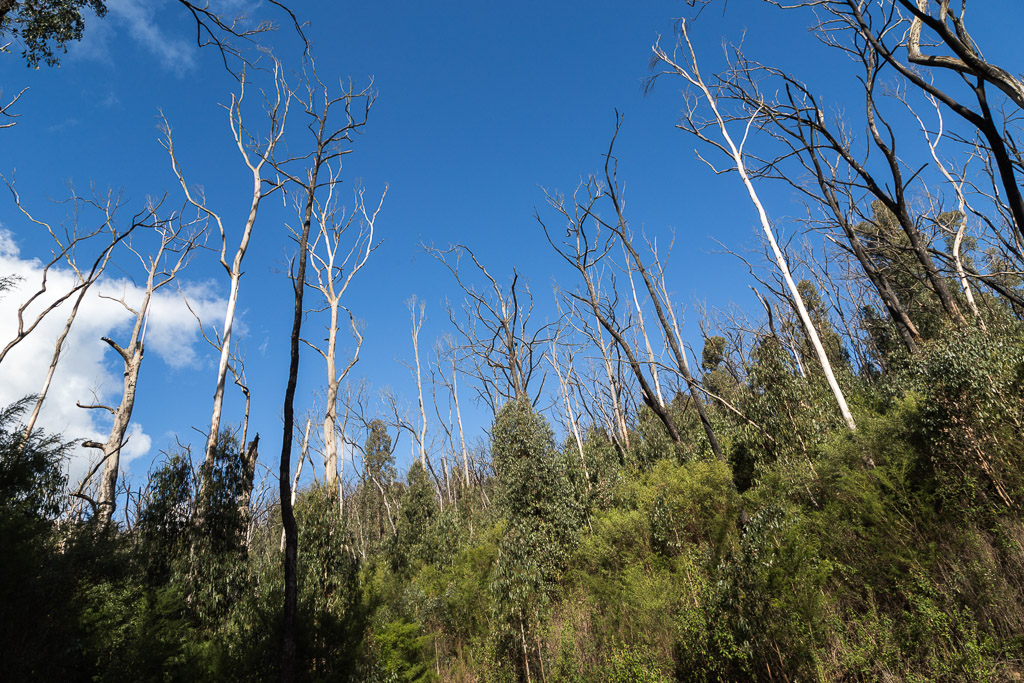 Sap on a burnt tree caught my eye… 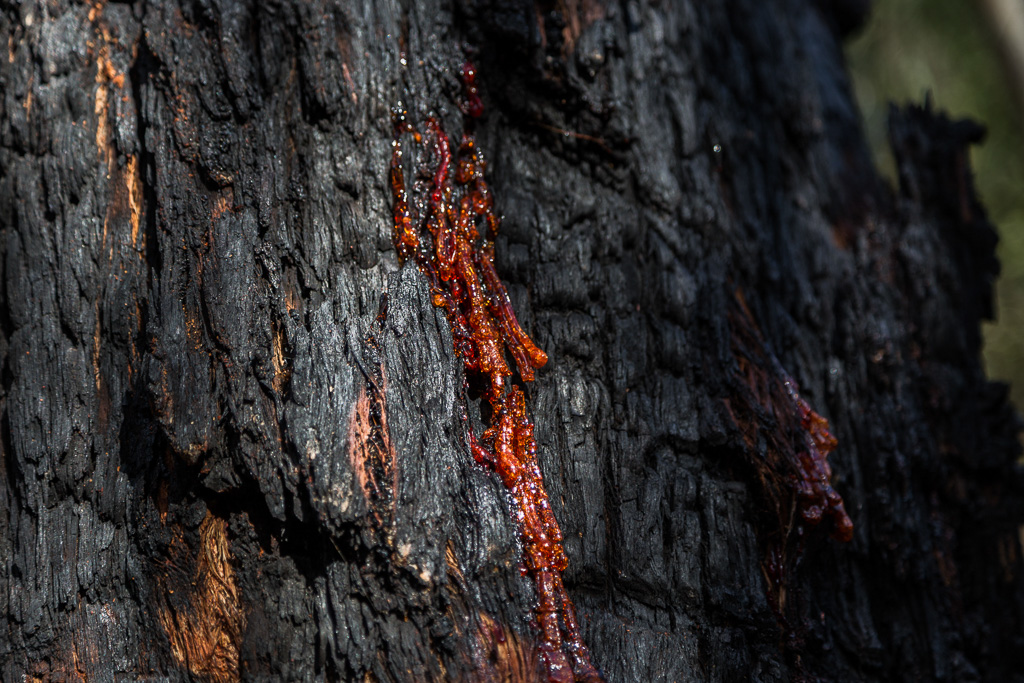 …before the track finally levelled off at Running Creek. The ferny areas, which had the quaint names of Ferny Nook and Hazel Glade were long gone. A few ferns were growing again, but I wonder if they will be as spectacular as they were in the past?

I took a few photos near the creek, but frankly, the results were average, so you miss out on the water. The track doesn’t linger at the creek, as it almost immediately begins to climb again on the way to Masons Falls. 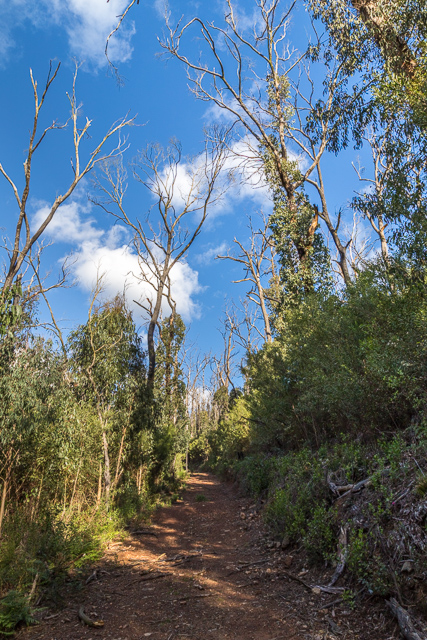 I trudged upwards, before the incline faded, as it neared the waterfall. Here, there’s certainly been some changes. A huge deck has been built, providing a vast lookout towards the falls. Water was flowing quite steadily, but I must admit, I’d lost my mojo a bit. I’d like to have created some slow shutter speed shots, but without the tripod, I just took standard tourist photos instead. 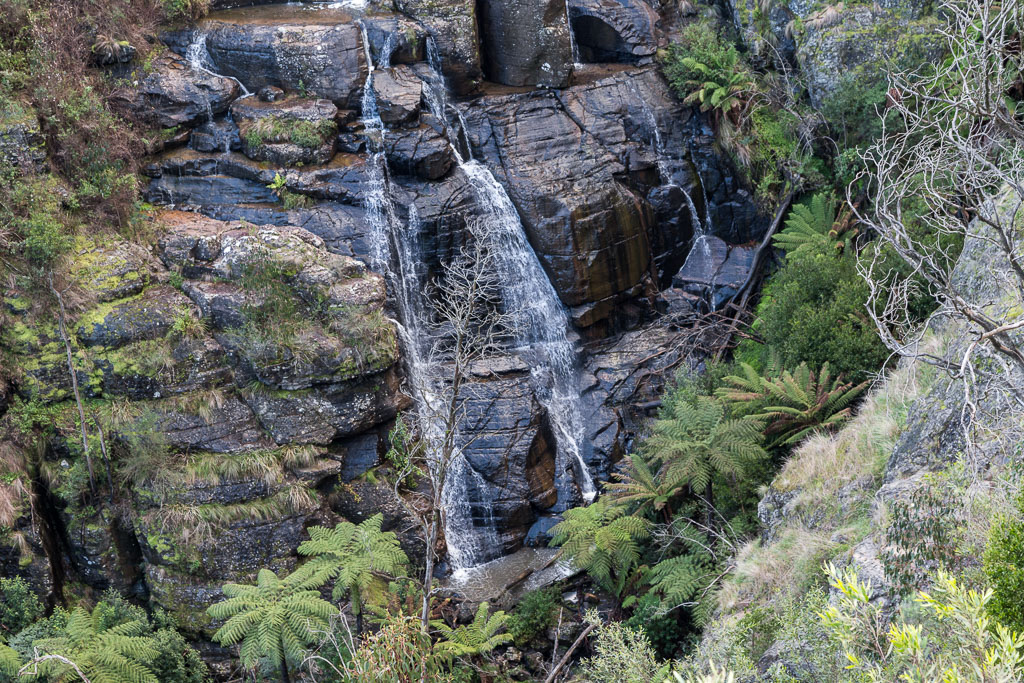 A long walkway with wooden railing leads from the lookout to Masons Falls picnic area. I continued on… 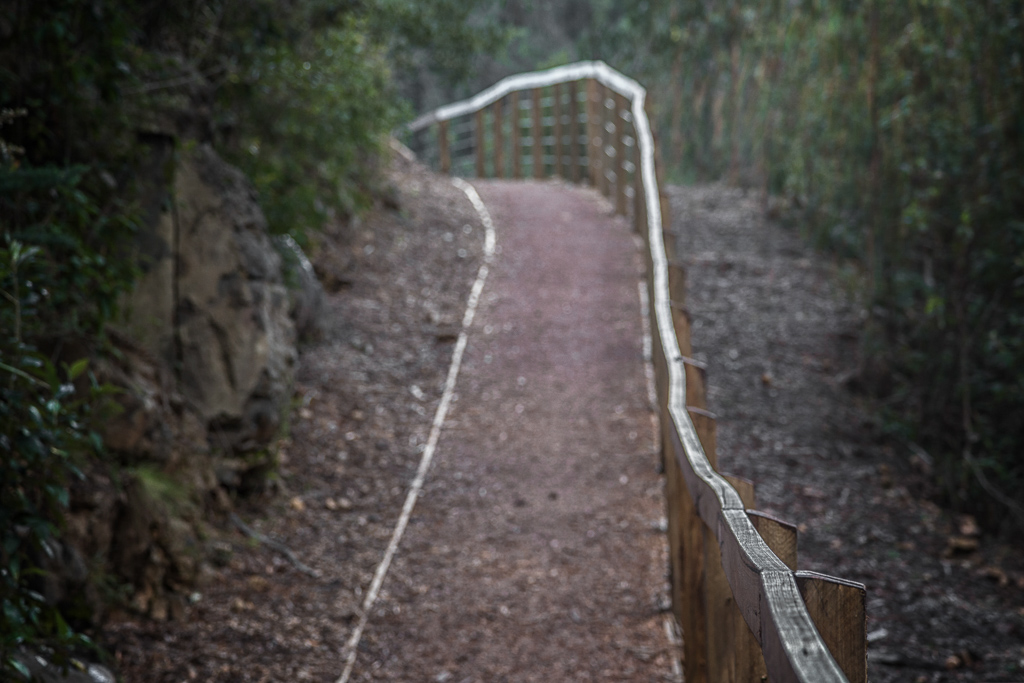 …before stopping when I heard some strange sounds in the bush. There was the sound of a cockatoo, which was no surprise, but when the call suddenly changed to another bird, it could only be one animal. Yes, the mimicking sound of a lyrebird was close by. The only trouble was, I couldn’t get a clear view due to the surrounding bush. His feathers were clear to see though… 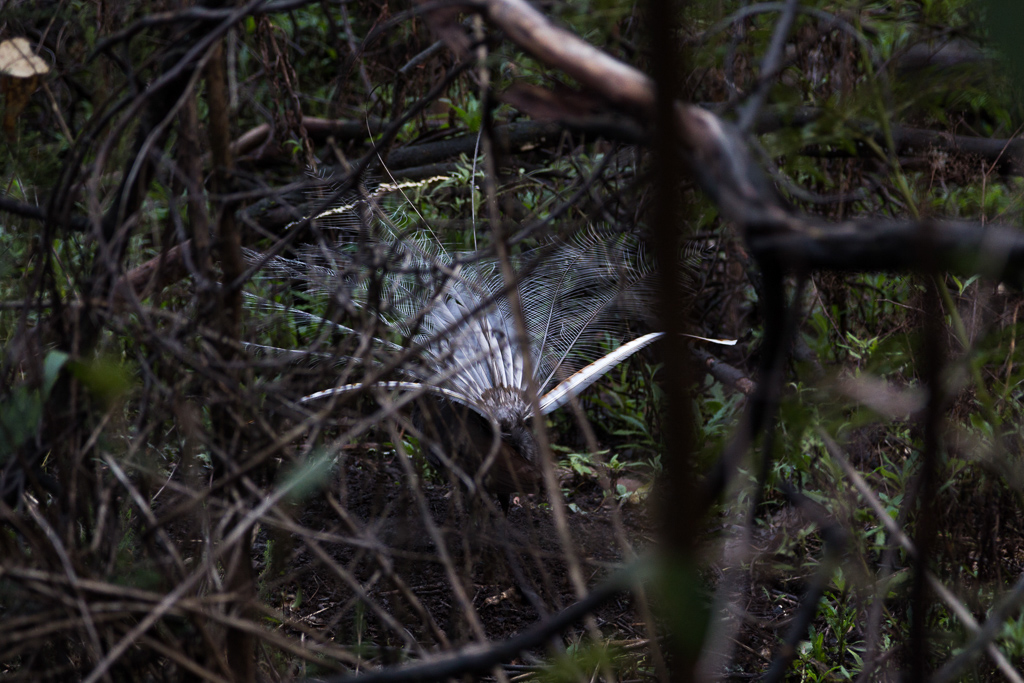 …as I slowly sneaked up… 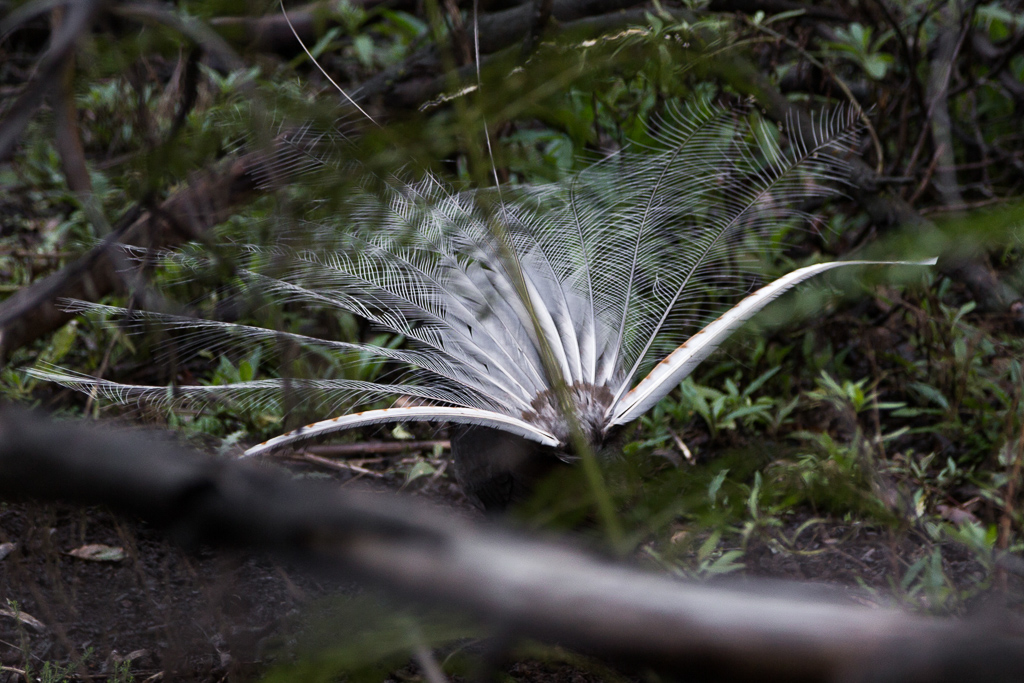 …but, I could get no closer than this, as he spotted me and took off into the bush. 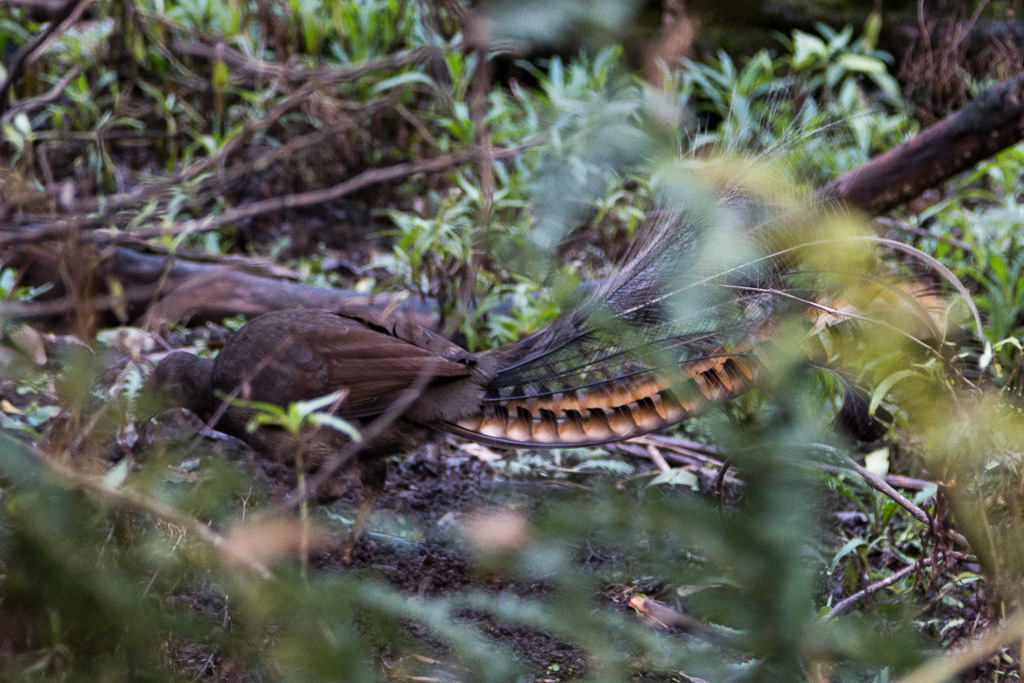 I must say though, they’re certainly a welcoming sight in an area that’s slowly coming back to life. Reaching the picnic area, I was amazed at the amount of work which had been undertaken. Huge covered areas with BBQ’s have been constructed. On this occasion, it was deserted and although I took a few photos, there’s no need to show them. I’m sure you know what a outdoor BBQ looks like?

I was on the homeward leg now, as I sloshed along the muddiest track for the day… 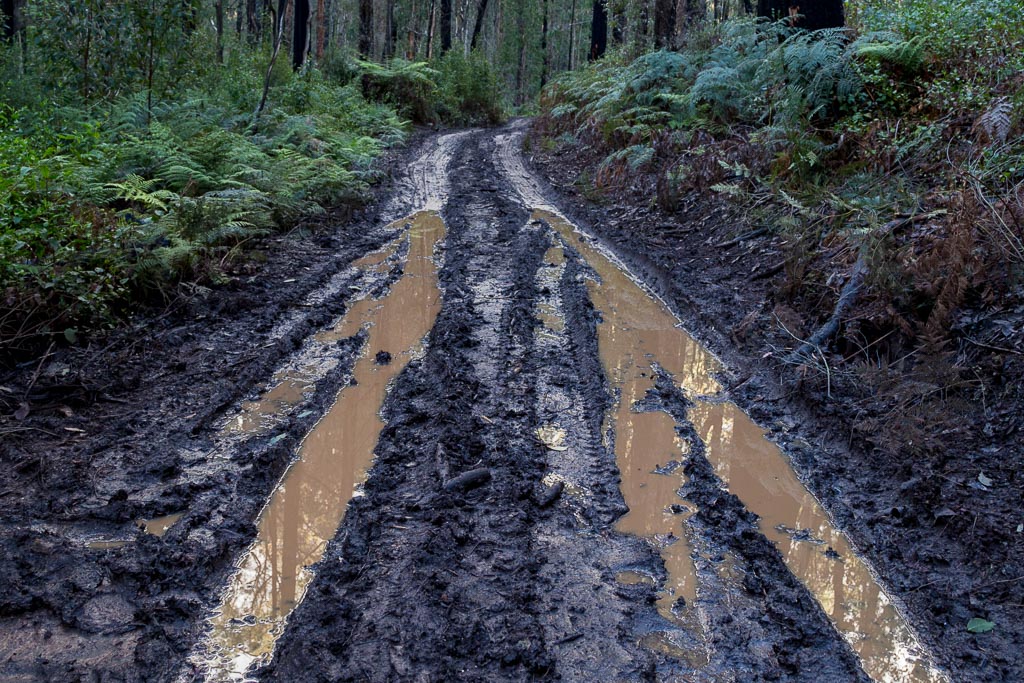 …following an incline, which ended up hugging the park boundary. Paddocks, lit by the golden glow of the late afternoon sun, sat to one side. 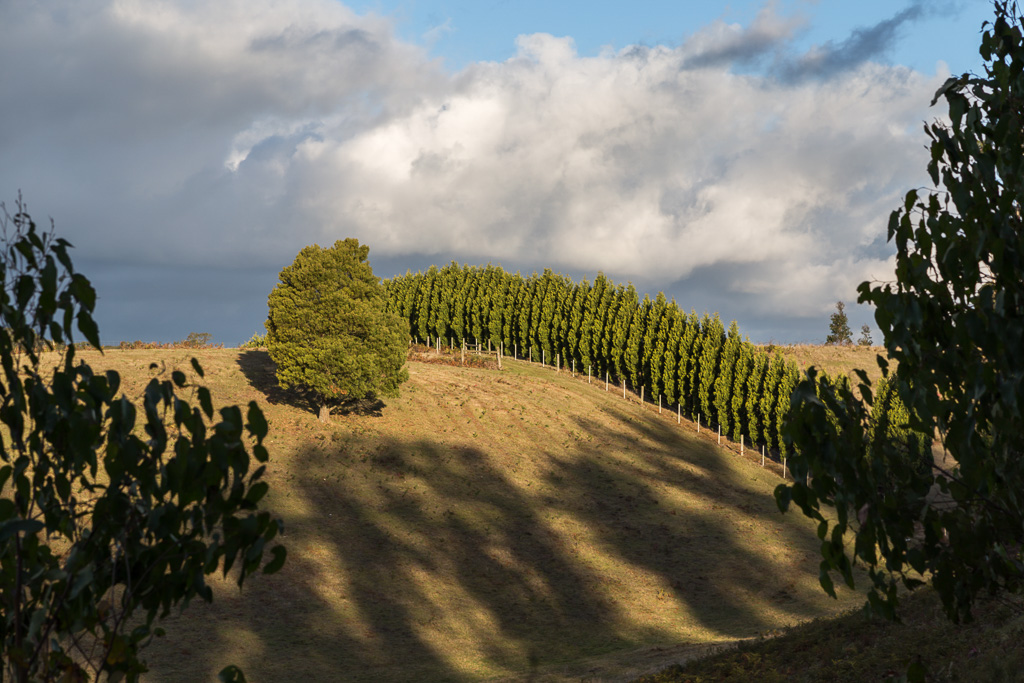 I liked the sunlit trees… 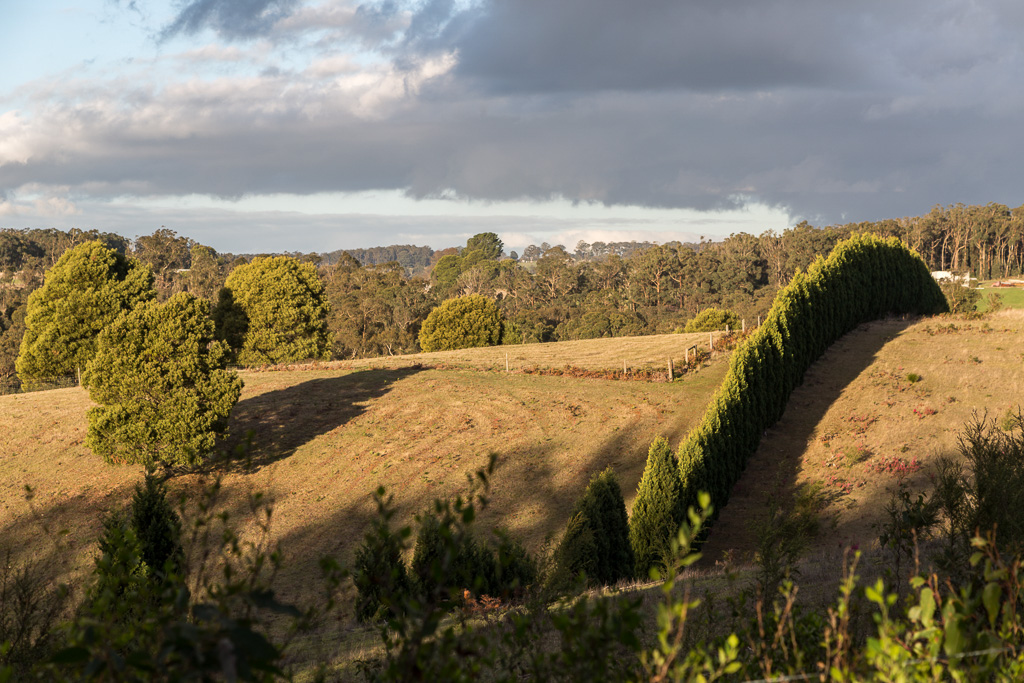 …which contrasted with dark clouds behind. 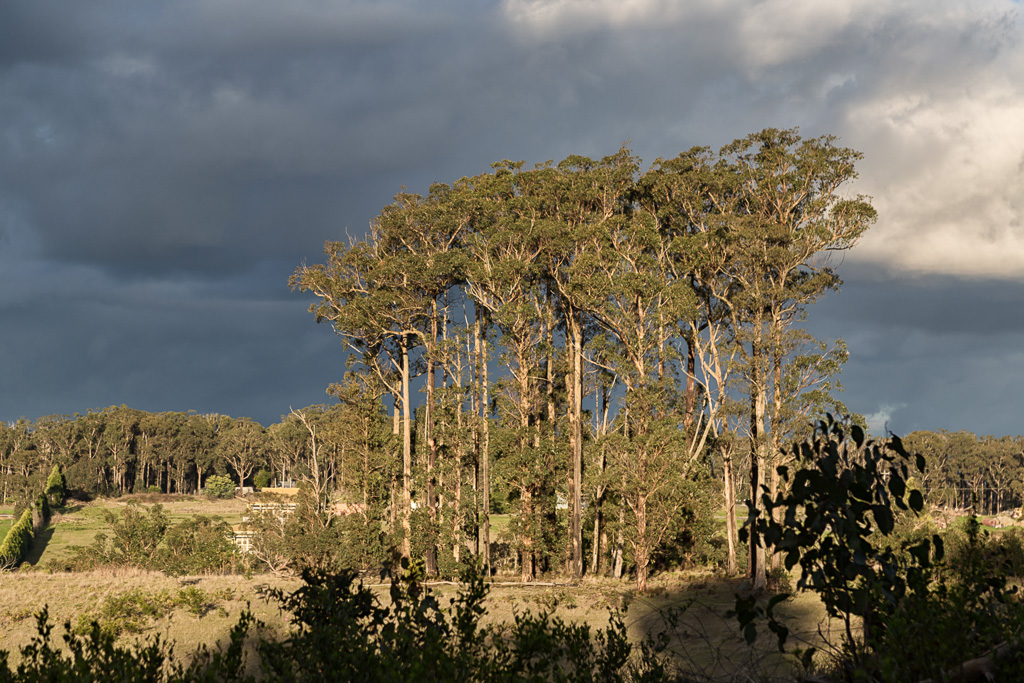 I passed a house, right on the park boundary and waved at the owner who was gardening at the time. In the end, I’d had been lucky with the weather, having been only slightly dampened by showers at the start. The advantage of the rain though, was I could get some nice reflections in puddles on the track, whilst the light was fading. 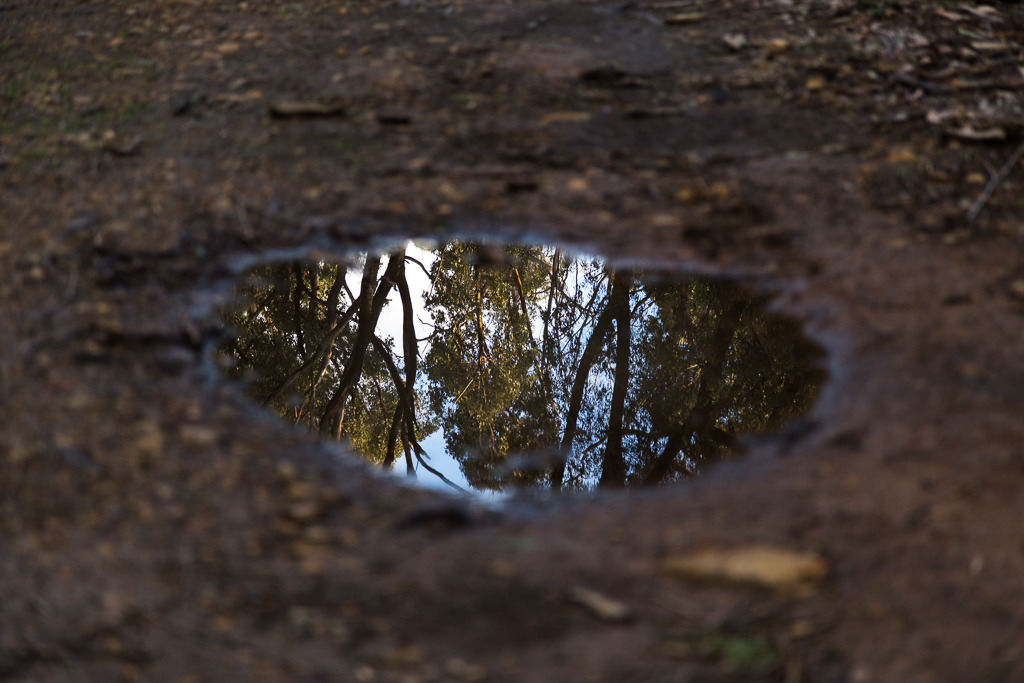 Finally near the end, I did spot one companion who was perfectly positioned for my last photo of the walk. 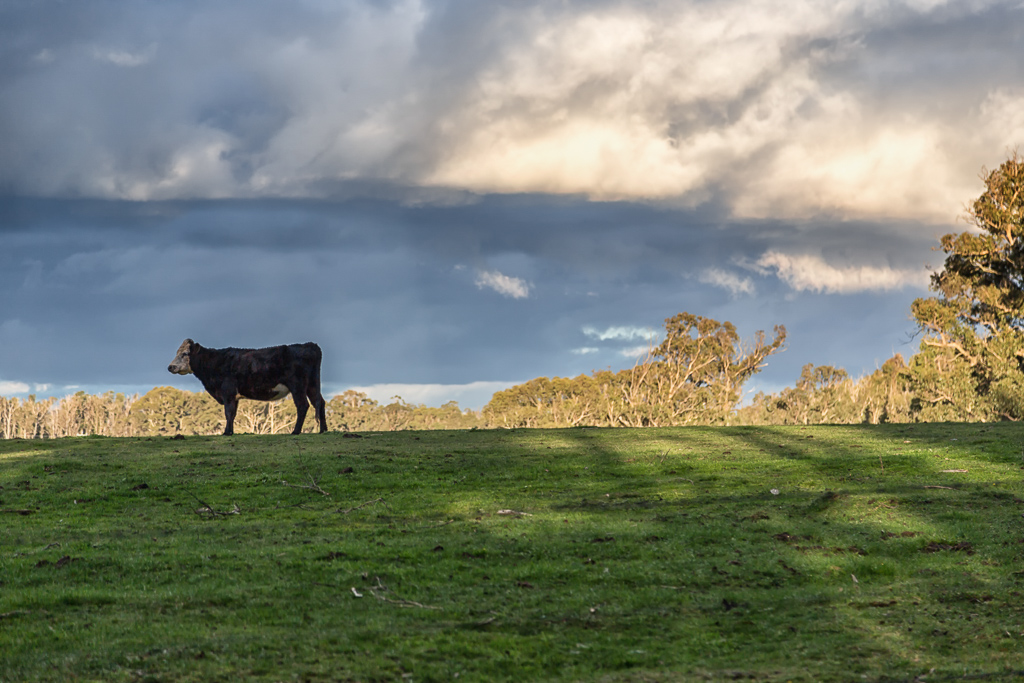 Then I was back at the car and done for the day.

So, that was that. I’d finally returned, but there had been an off-kilter feeling for the day. Everything was in the same place, but it was like an alternate world. All of it was familiar, but at the same time, conflicting as well.

I left and haven’t been back since. Maybe I’ll head up to Masons Falls again one day and get those shots of the falling water, which I wanted during this trip…?