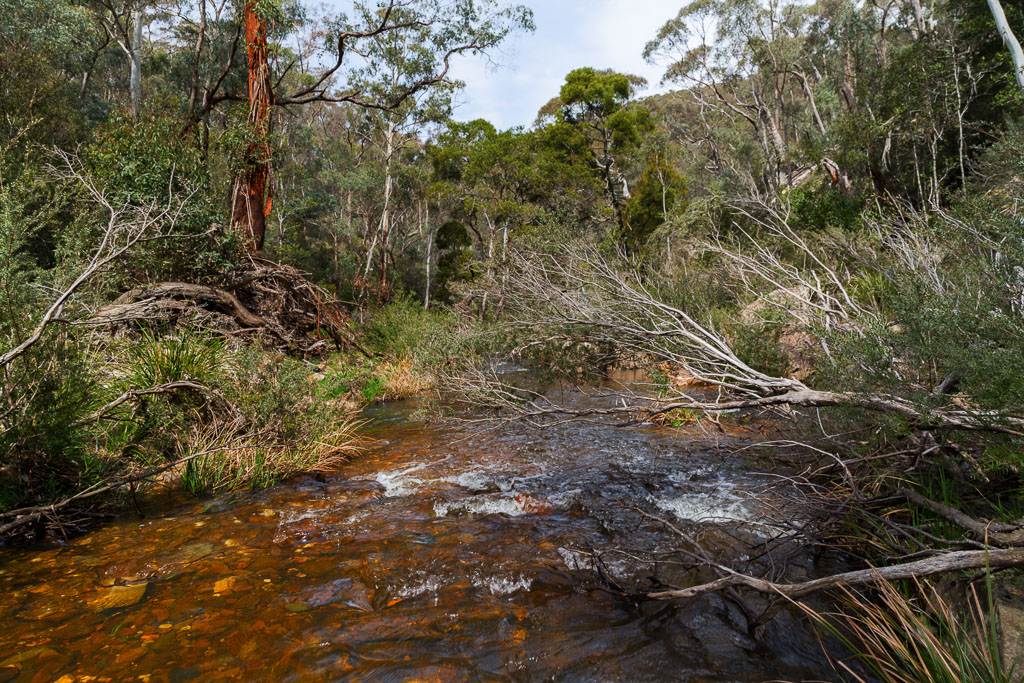 Oh brother, it’s that time of the week where I’ve got to tap out another post. Lately, I must admit I’ve got ‘dem blogging blues’. It’s where I sit there and wonder, “What’s the point of it?” I think all bloggers feel it during this never-ending saga of talking to oneself, which just happens to be in public.

Anyway, here I am writing about the Lerderderg. Again. Lately, I’ve chalked up quite a few walks in there, but I must say there aren’t many left that interest me. East Walk, Lerderderg State Park is apparently one of the more popular strolls, so I thought it was part of my blogging duty to get it done. It also promised to be easier than my previous walks, as there’s an actual track next to the river. I’ve got to admit though, the title of this one didn’t inspire me much. ‘East Walk’? Can they have made it sound a bit spicier? I almost slipped into a coma when I read it. Again, I took the track notes from GT’s ‘Melbourne’s Western Gorges‘. Oh yeah, remember the name of this walk, as it will become important in a minute.

So, heading out to the ‘derg, I reached O’Briens Road in quick time. Just as I turned off bitumen and onto gravel, ‘War Pigs’ by Black Sabbath came up on the iPod shuffle. I think it was an apt song for venturing into the gorge.

Now, in all my Lerderderg walks, I’ve never seen another walker. After all these trips, I just assume I’m the only bloke to go there, so it was a bit of a shock when I reached the camping area of O’Briens Crossing and found it wall to wall with parked vehicles. The whole stinkin’ world was crammed in next to the river. Tents were set-up everywhere, but the comforts of home were with the canvas. Deck chairs, barbecues, stereos, multiple dogs and crate loads of booze. I guess that was to be expected when I read a sign in the car-park with an arrow pointing to a ‘bucks night’?

Bloody hell. This was a nightmare and I’m not sure how any of the campers have the tolerance to spend nights out in the ‘bush’, that’s no different to the suburbia where I’d escaped from.

I threw the pack on and powered away without even contemplating where I was meant to walk. All I wanted to do was quickly leave the sound of duelling banjos behind. Strolling the riverbank, it took a few bends of the Lerderderg River for the noise to fade, but there seemed something wrong. The walk was quite hard.

As it’s one of the most popular jaunts, surely it shouldn’t be this difficult? Scrub, rocks and large, fallen trees were causing me some grief. The tree below wasn’t too bad… 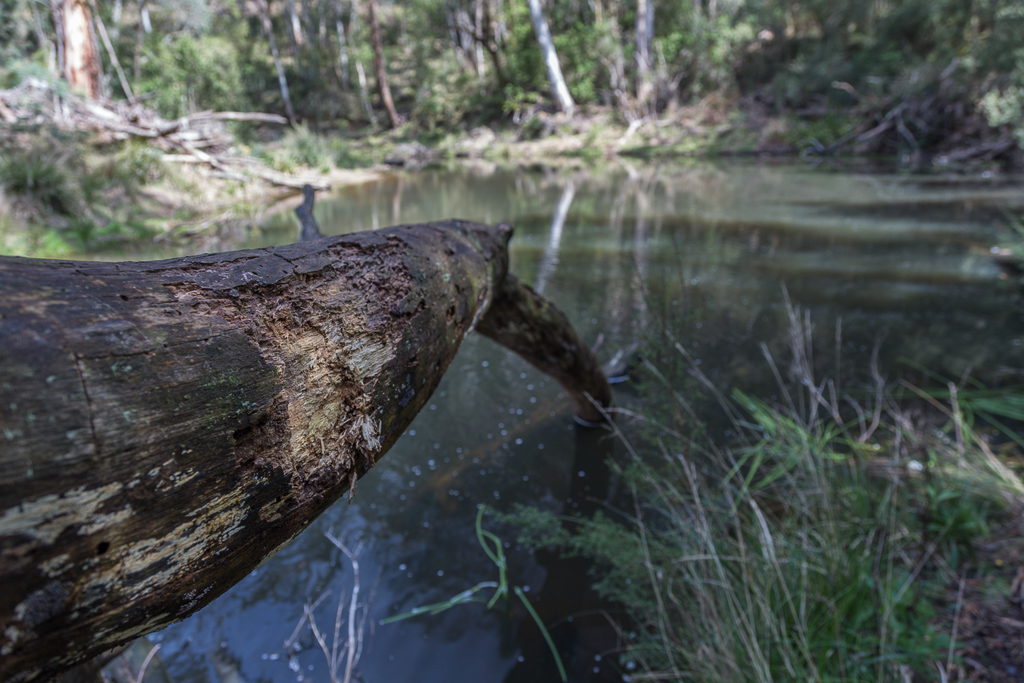 ‘Of all the trees we could’ve hit, we had to get one that hits back’.

…but this next one was a bastard. 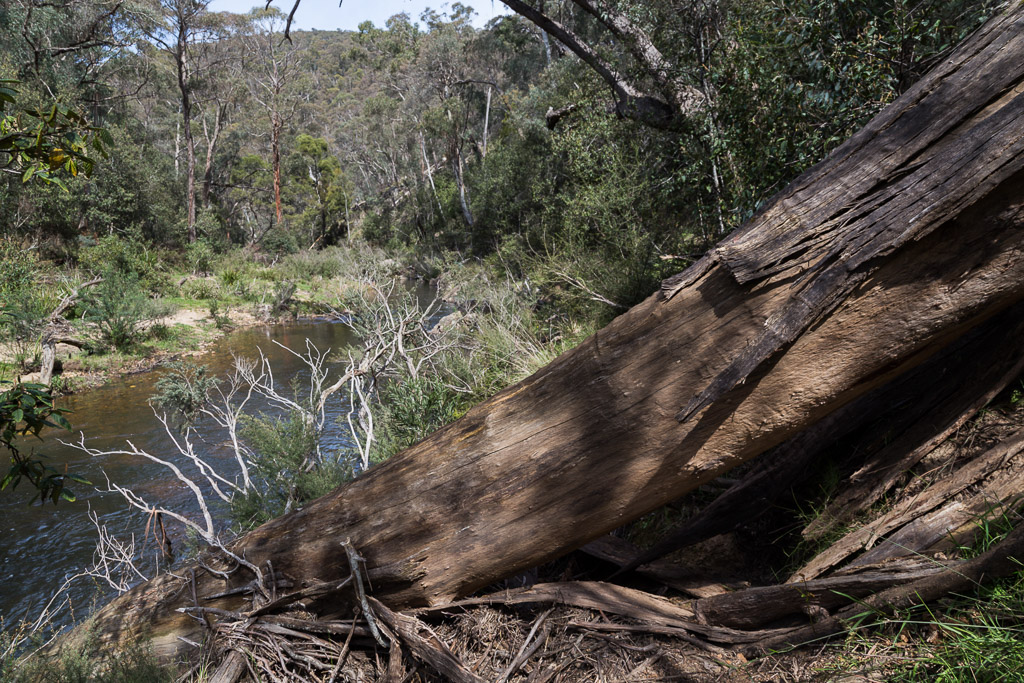 The massive, wide trunk lay across the path. I couldn’t climb over it due to the width and if I slipped off I was heading straight in the water where the rest of the trunk was sitting. So, I dragged myself up a steep hill, grabbing pieces of grass for support and made my way around it from the top.

Phew. That sucked. I continued struggling until I saw something on the other side of the river. Yes, it was a bloke strolling along with a baby on his back in some sort of contraption and he was moving so easily, you’d think he was going down to the milkbar. Only then did I realise what had happened. I WAS ON THE WRONG SIDE OF THE BLOODY RIVER.

Did you enjoy that? I got the GPS out and looked at the compass. Yes, I was on the west side and seeing how the aim of the day is to hike the ‘East Walk’, I concluded I’d ballsed up and it thoroughly explains why the walking had been so strenuous. You know what? Due to my impending coma, I didn’t really take in what the name signified. Heads east? Something like that? Obviously, I’m not much of an analytical bloke when it comes to these strolls.

Should I read walk notes more closely in future? Nah, not really. At least it gave me something to write about. Anyway, this was all very good, but it meant I had to cross the river. What do you do? Not much, but adopt my usual method. Forget looking for dry spots. Just hop in and head over… 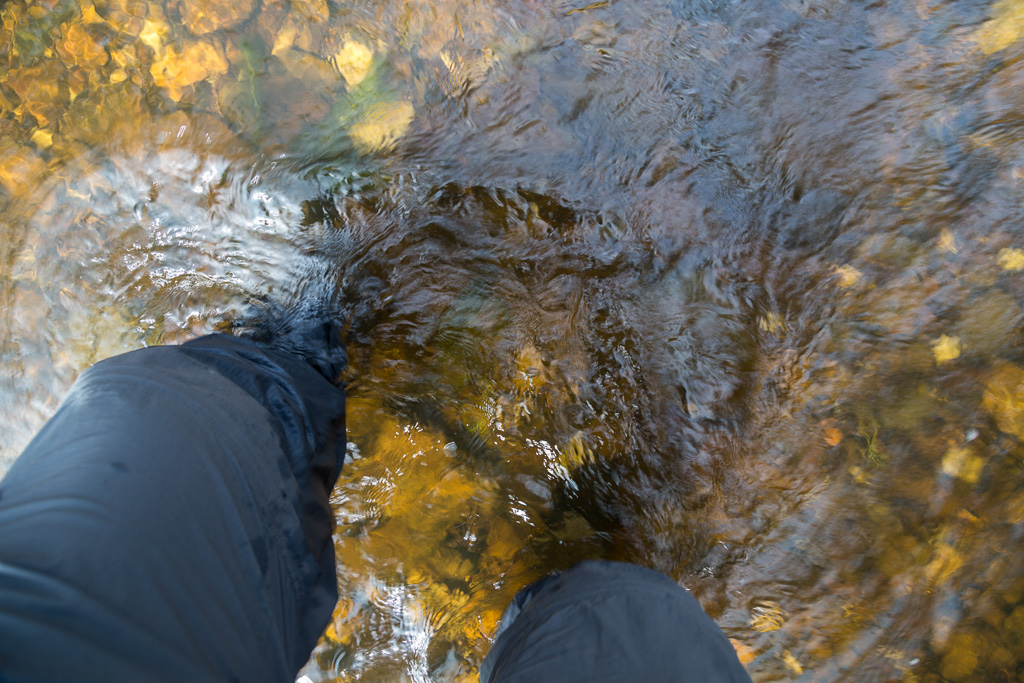 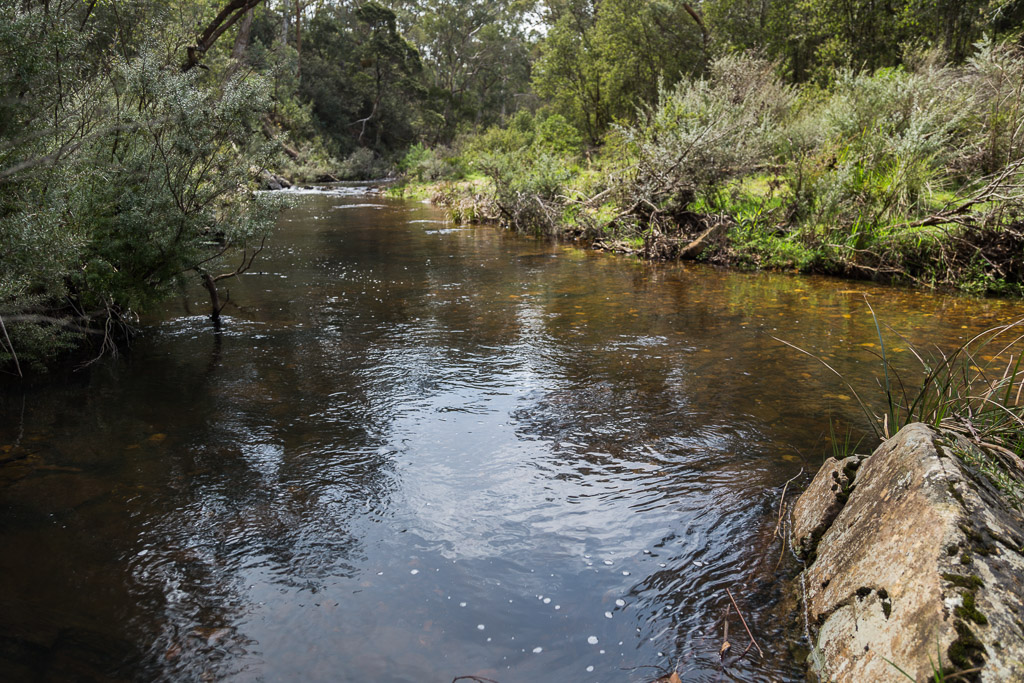 …and then I was on the other side admiring a well-defined track. Well, that was a lot of dicking around for nothing, wasn’t it? I guess this is where the walk really started and it was standard Lerderderg fare. A few rocks to scramble over… 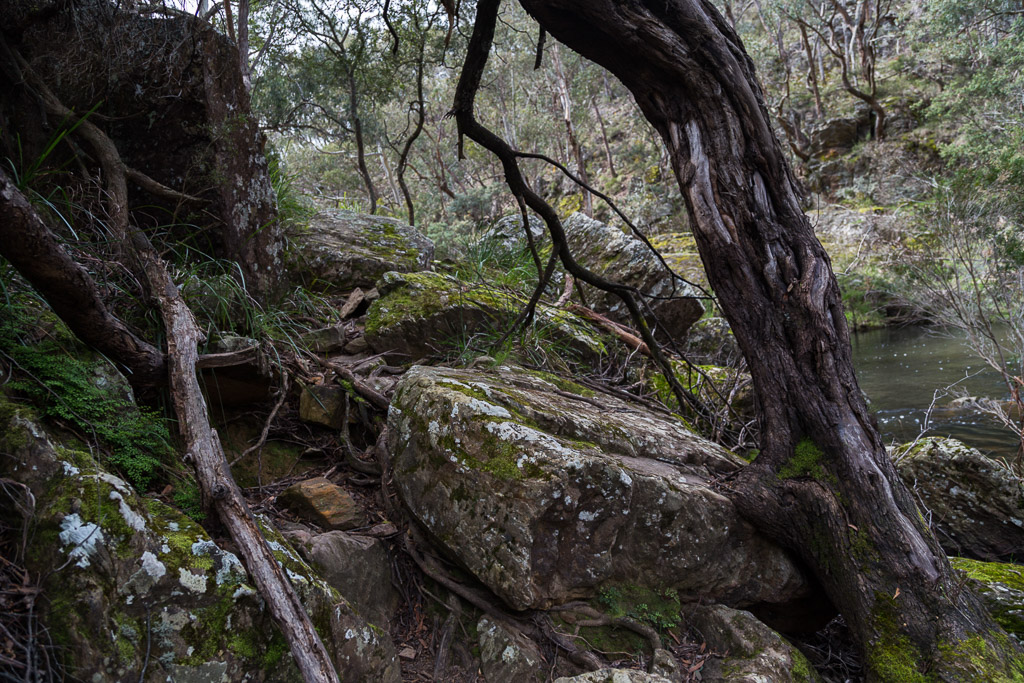 …before bypassing some vertical walls… 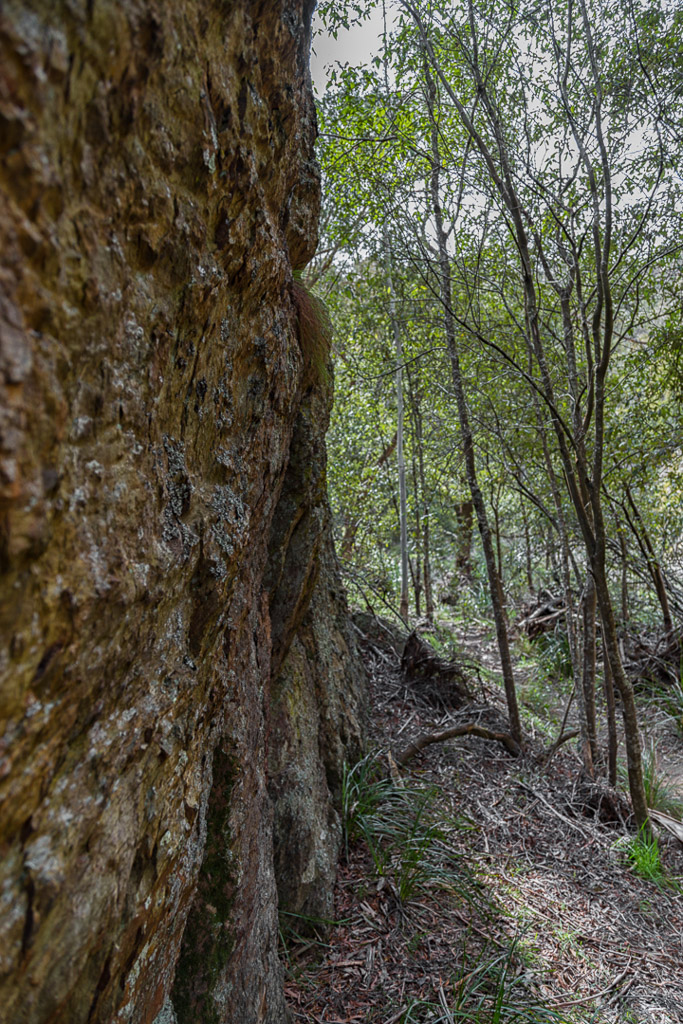 …and negotiating the inevitable fallen trees. 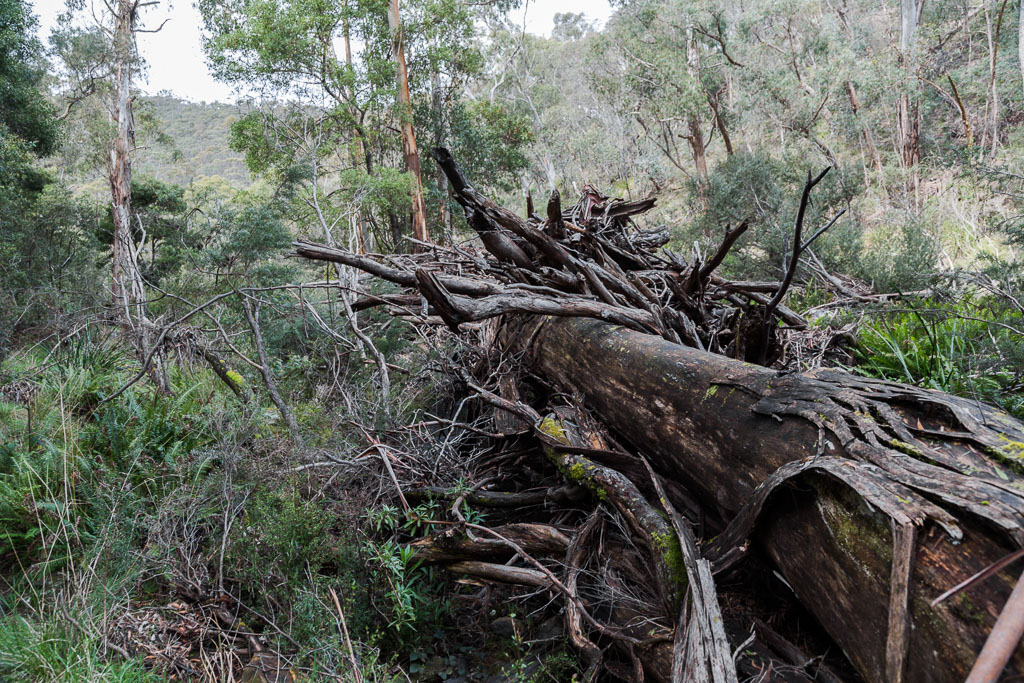 I noticed the remains of ‘ye olde’ mining on this walk more than the others I’d been to. A bit of weaving amongst mullock heaps… 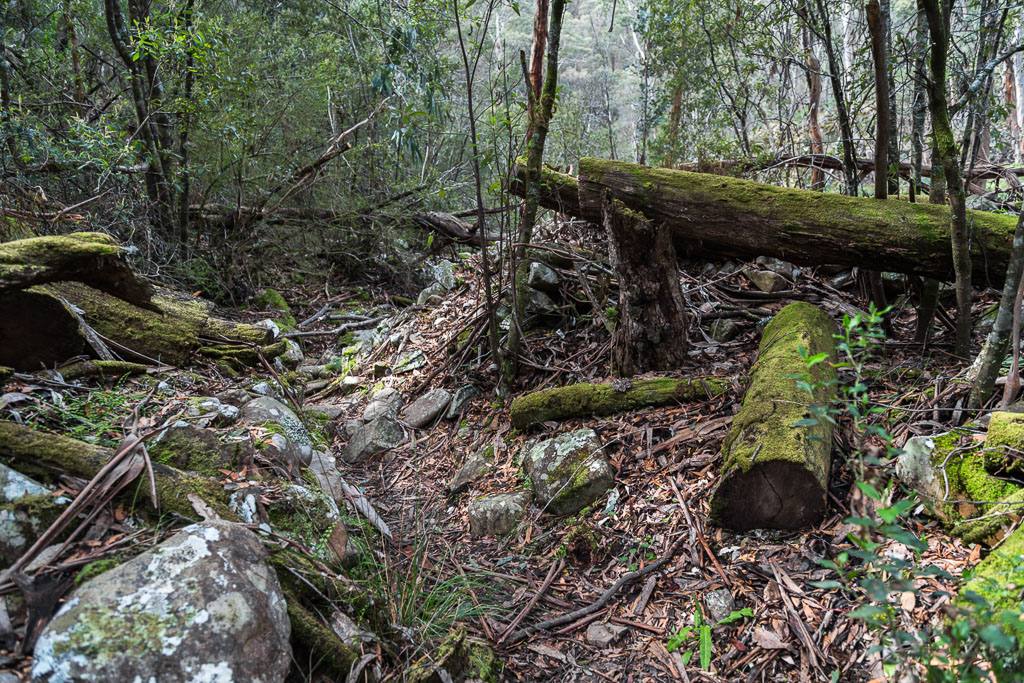 …with the occasional large leaf, which are always handy for a photo. 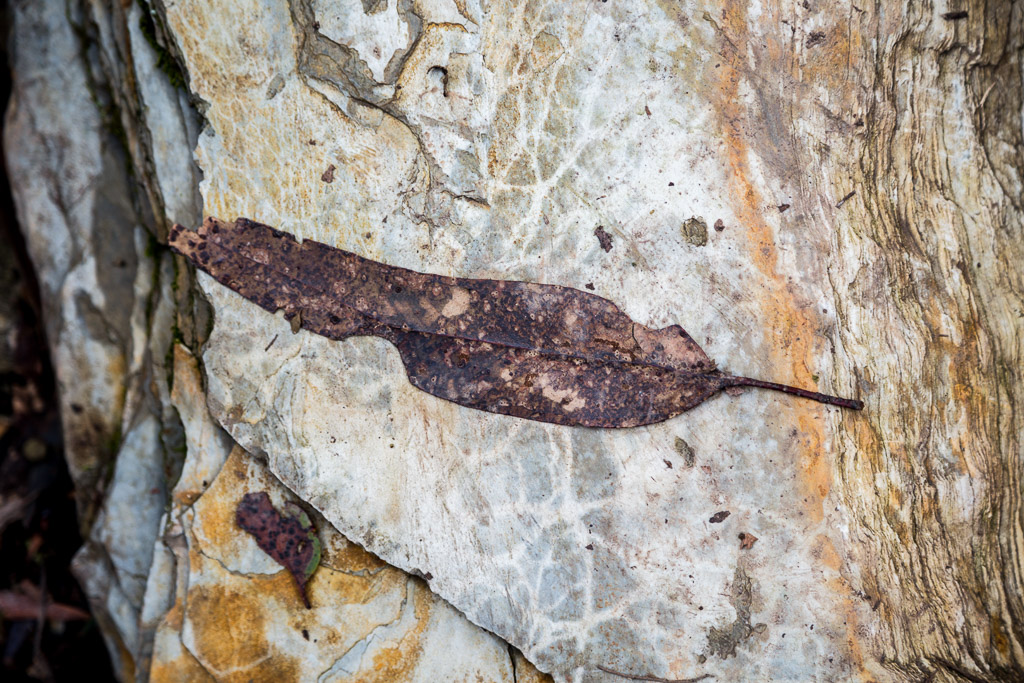 Walking on the actual path was a bonus, but I was feeling a bit more fatigue than I’d expected. I guess the numerous undulations, rocks and weaving amongst flood debris began to add up on my crappy joints. There was the odd section where I had to concentrate as well. This next bit took some mental application in hugging the sloping rocks to avoid slipping into the water. It’s not getting wet which bothers me, it’s all about keeping the camera dry! 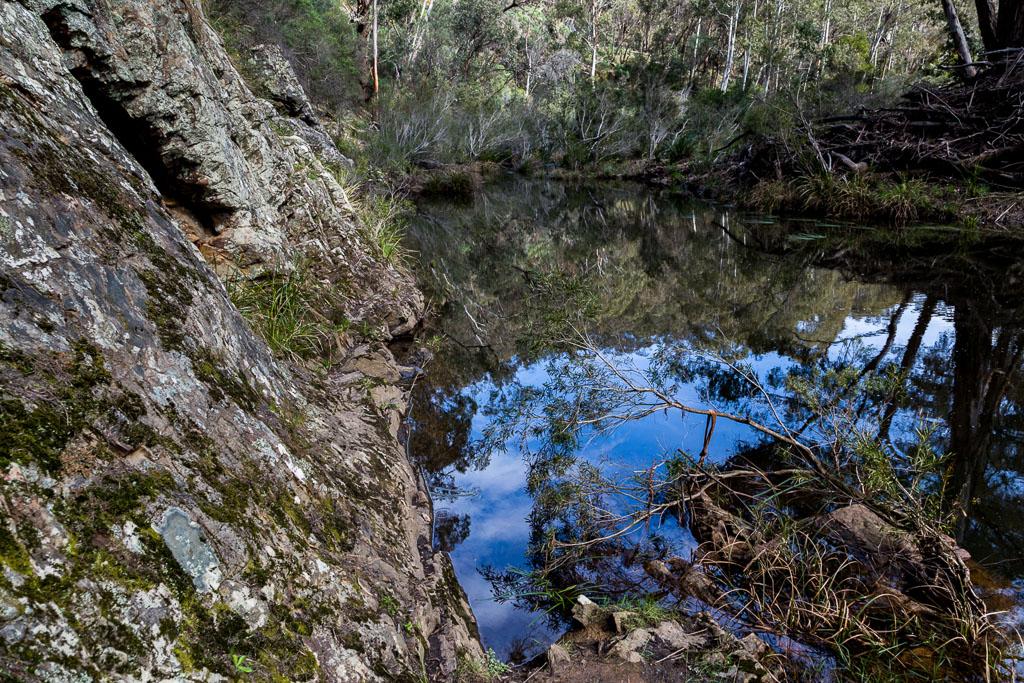 The bloke with the poor centre of gravity survived and if I can, anyone can. Shortly after, I came across, for me, the most interesting part of the walk. A strange sight in a bend of the river. A vast assortment of flood driven, timber debris had ended up piling into an enormous log-jam. 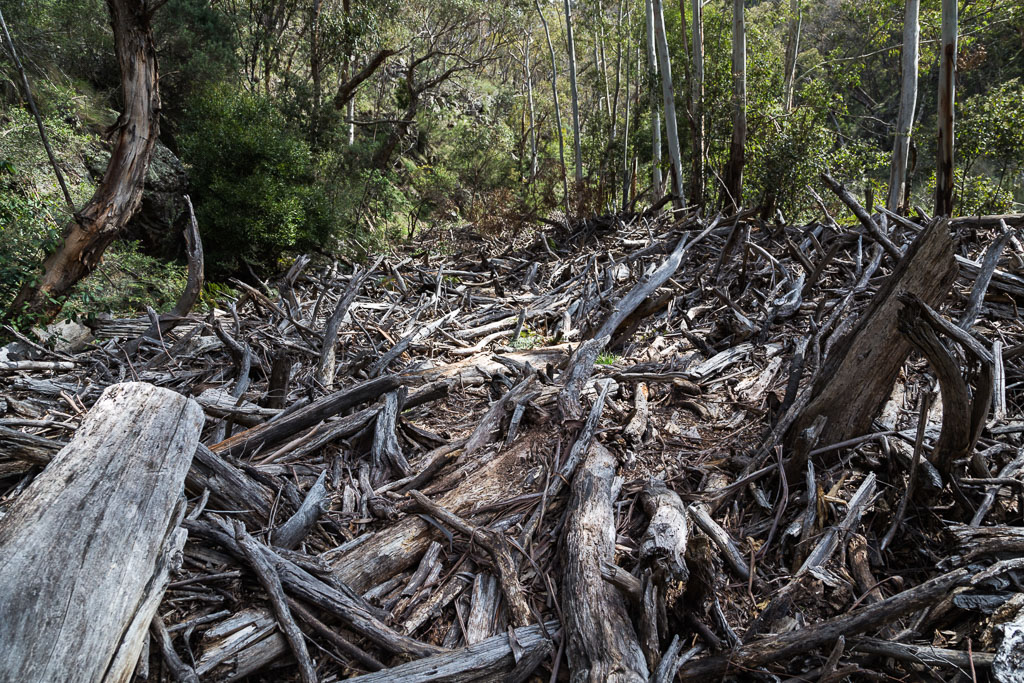 This huge carpet of wood was a strange sight and I can only imagine what level the water had to be to create this, as I tiptoed across, careful not to step between gaps in the larger pieces. 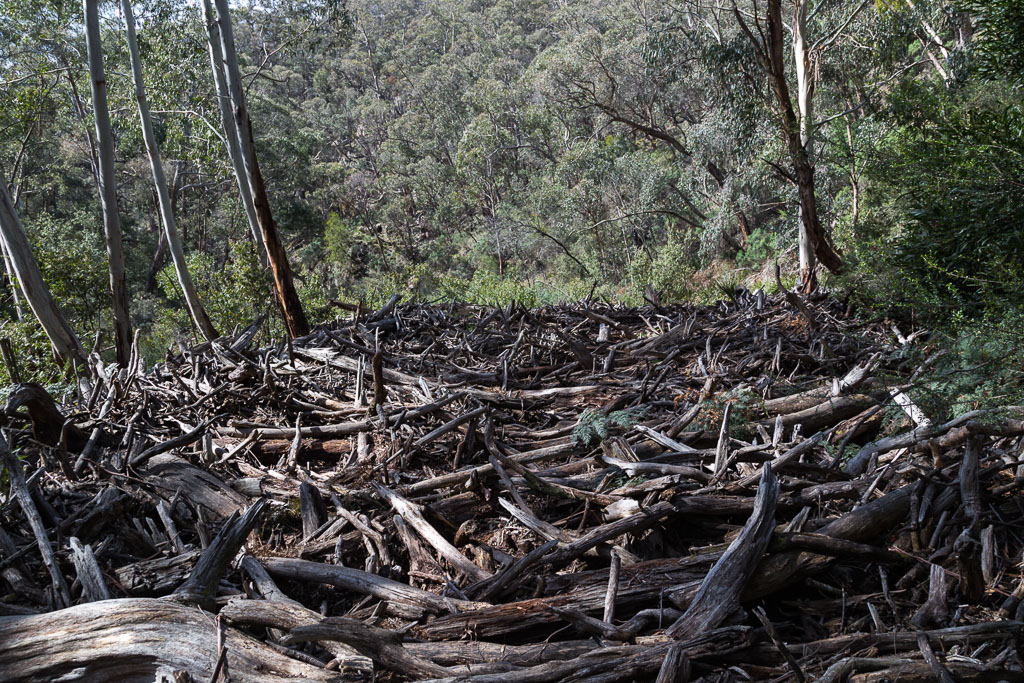 It looked quite bizarre and judging by the amount, will still be there for many years to come. I pottered around this spot for a while before moving on. In between the constant weaving, there were some nice views of the river… 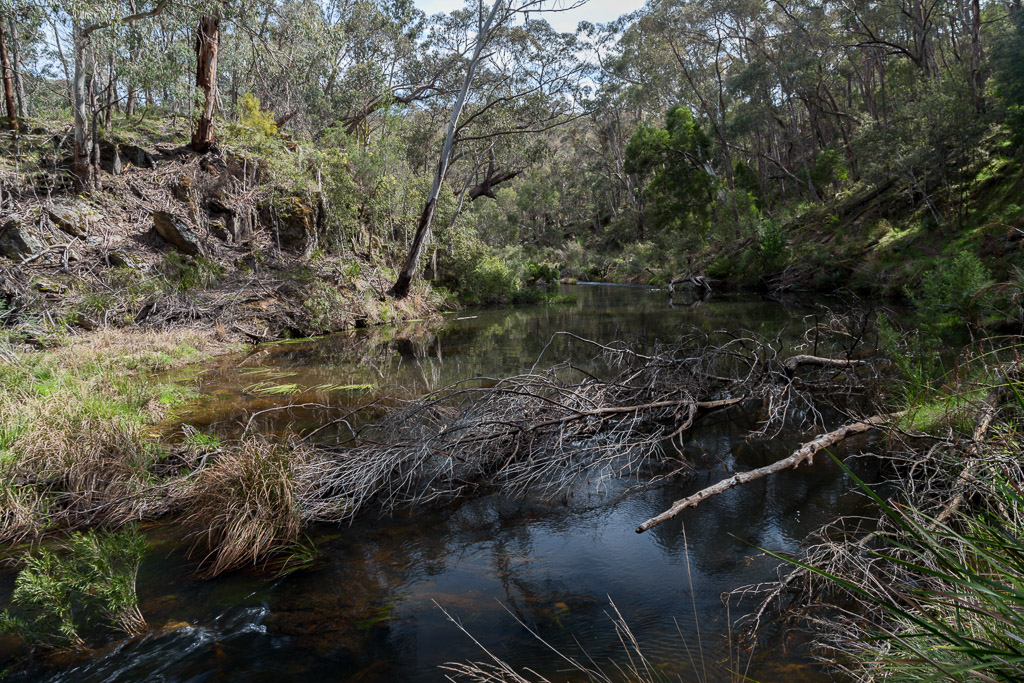 This standard fare continued for a few hours and I was quite thankful when the track began to move away from the river and gain a bit of height near Mine Camp. I bypassed the camp on this occasion, as I’d pottered around it a few weeks earlier on another walk. Not that you’d know, as it’s one of the ones I haven’t written about!

Strolling along the rising track, I came across the entrance to an old mine, which I could have walked into, as the entrance was quite wide. I didn’t though, as it seemed insane to do so. Peering in was all I needed… 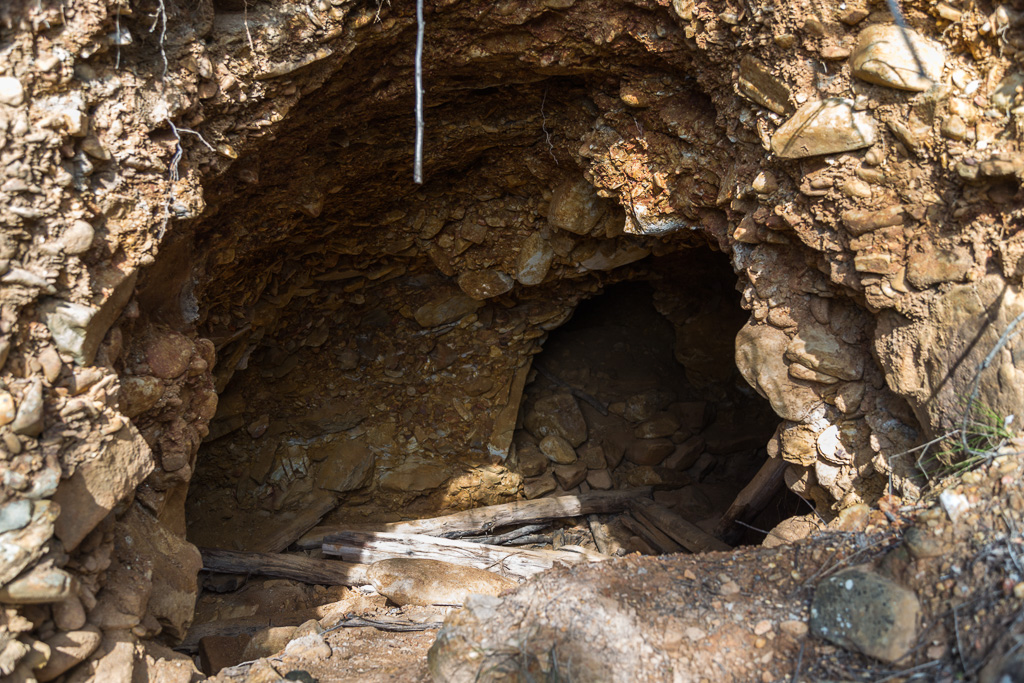 Ambling on, I then had one of those annoying moments when hiking. After a few hours of strolling, I tend get blasé about the ground I’m walking on. Tree roots, branches and rocks become a blur, so when I’m about a foot away from stepping on yet another fallen branch, and the branch moves, that’s when I’m suddenly snapped out of my somnambulance.

Yes, a snake was casually sliding across the path and it made me jump as I was probably only a couple of steps from stomping on it. I fired off a photo as it slowly vanished into the long grass verge of the track… 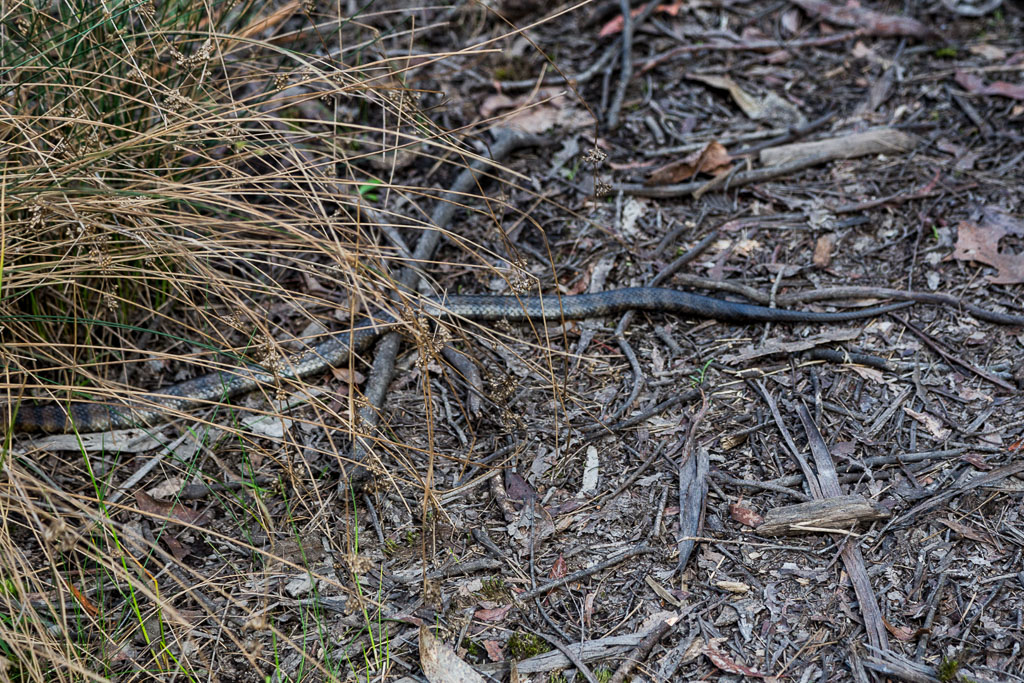 Usually, I only see snakes near water and the river seemed the logical spot to run into one. Yet it was high on the track, some distance from the water, where I spotted this striped reptile. It certainly woke me up and it confirms I’d definitely wear gaiters if I went walking in the gorge during the warmer months.

Now thoroughly awake, I checked the notes and they told me to find a lookout called Cowans Bluff nearby. It’s not marked, but it wasn’t hard to find. Just look for the highest point above the river. It’s off-track though and after my meeting with the slithery slider, I was pedantic about where I was stepping. I finally reached the top and it’s not a bad view. It was also the first time I’d stopped for the day, so I sat down to put my feet up for a little while. Mind you, I ensured the area was clear before sitting, as there’s no contest in a battle between tiger snake vs trouser snake. 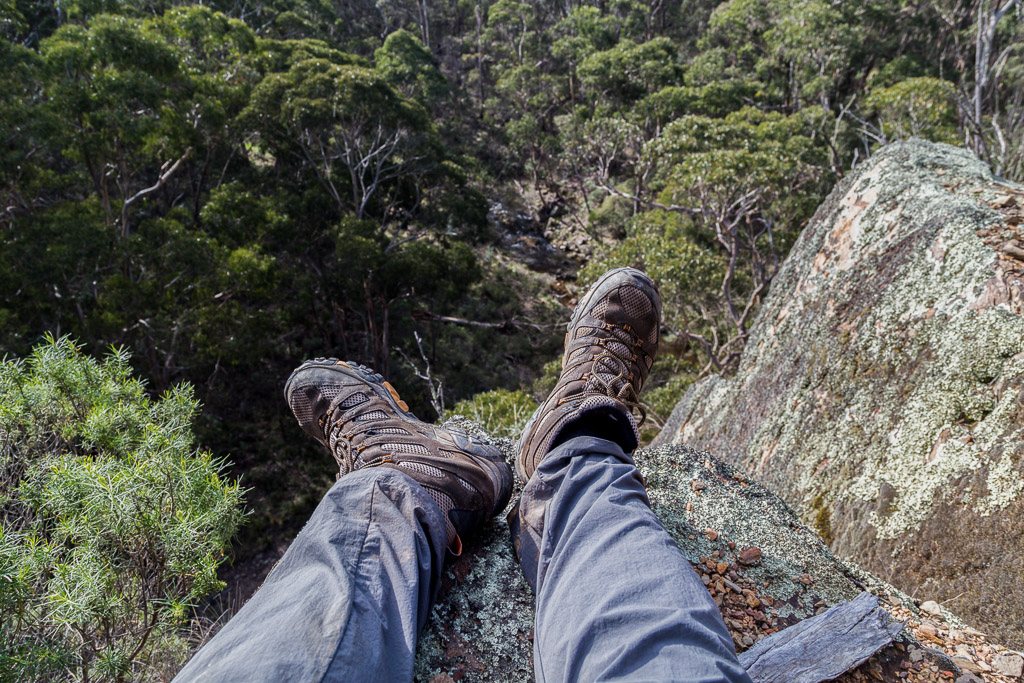 On top of Cowans Bluff

The walls to the rock outcrop are suitably vertical for either suicide or photo opportunities. They were both good options, but I chose the latter, as the last episode of ‘Breaking Bad’ is on Sunday and I want to find out how it concludes. 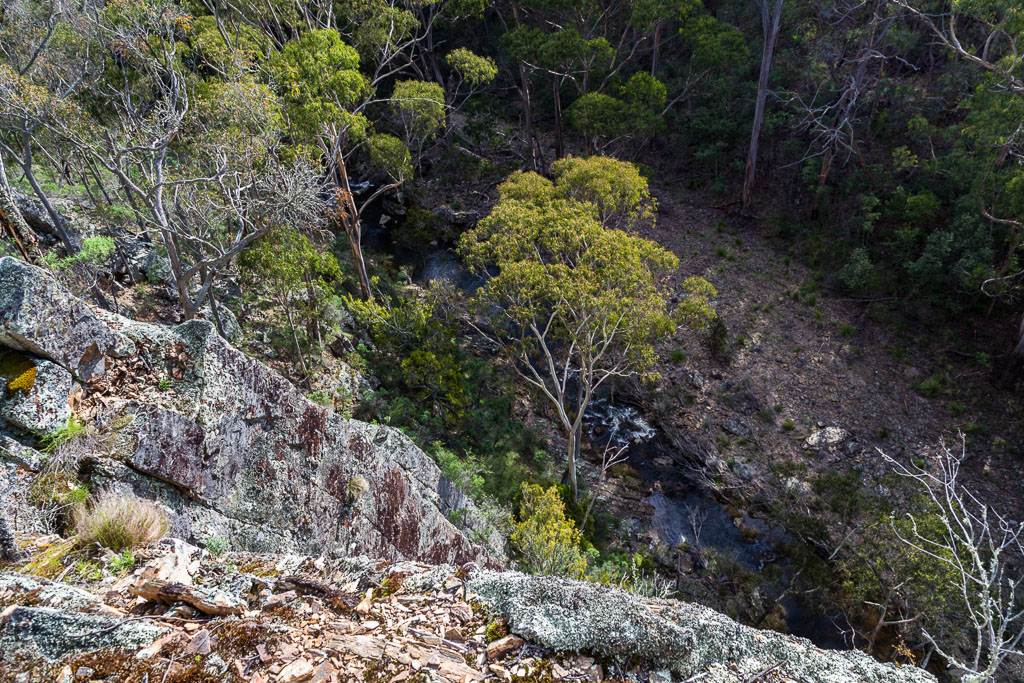 It’s a great spot and I could easily have pulled up a soft rock and had a snooze, but as it was late in the afternoon, I thought it best to move on and knock the walk off.

There was no more river action for a while, as I found Cowans Track, which would take me inland over a few hills. An old sign marked the way… 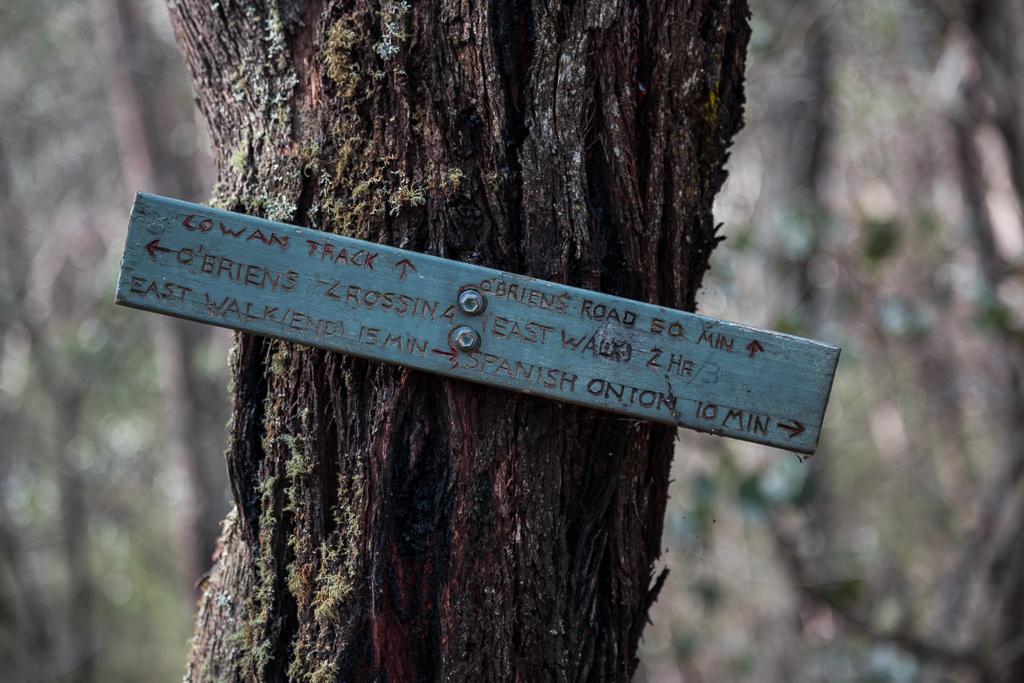 I’m not really sure what happened over the next hour. Cowans Track heads uphill and even though the climb was fairly casual, I hit the wall like a bastard. It might have been the ‘walking blues’, which kicked in, leading to these ‘blogging blues’. 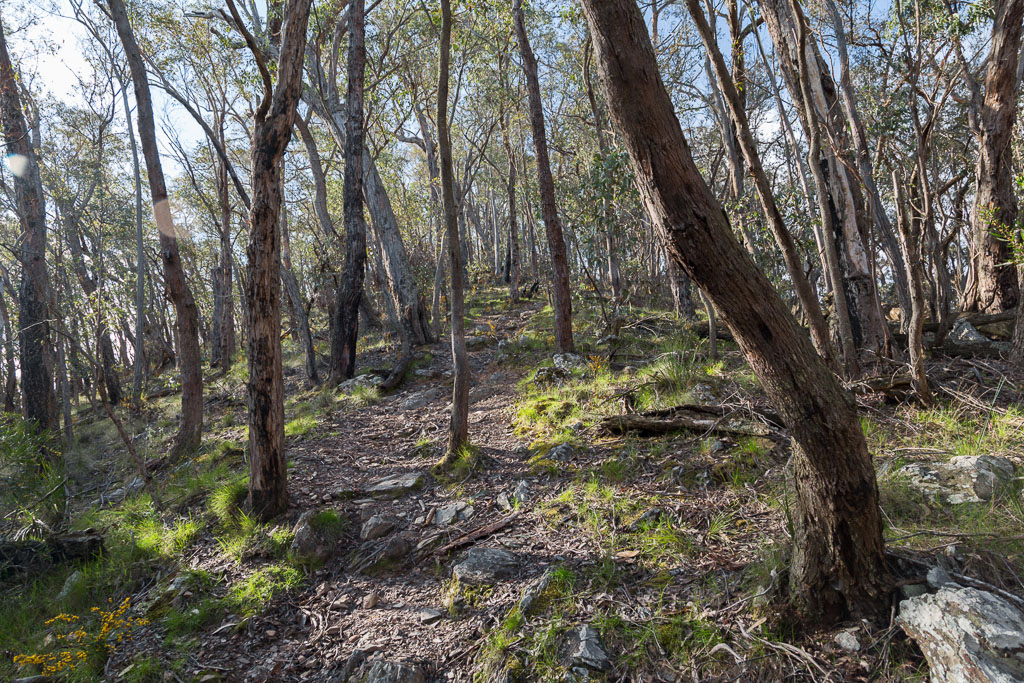 Sunglare in the late afternoon. Heading uphill on Cowans Track.

I really turned this hill into a trudge, but eventually struggled across the top to meet an old vehicle track. Highlights were thin on the ground, but I did find this unusual item. I’m not sure why it was sitting discarded in the middle of the path, but I suppose they did have a crap year. 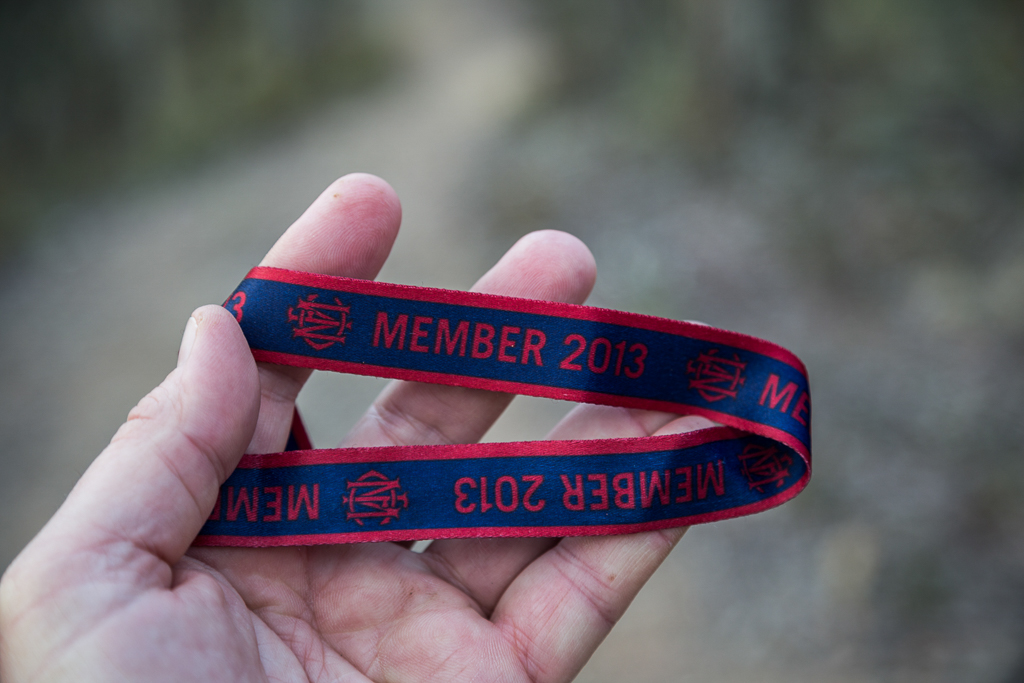 The thing is, once I’d picked it up, I couldn’t put it back, as I now had ownership of the rubbish, so I stuck it in my pocket and moved on.

I hadn’t seen many signs for the day, so when I did come across one, I was pleased to see some responsible shooters had modified it. I’d be disappointed if people with guns didn’t randomly shoot stuff like wankers. 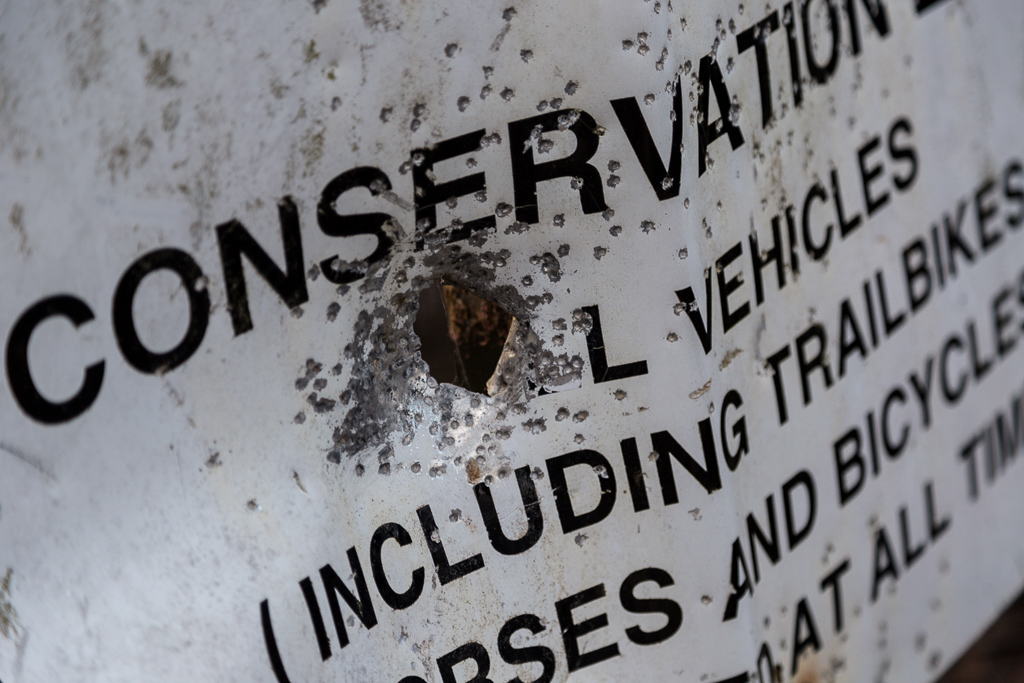 ‘Up until Doom, no one seemed to have thought about the double-barrel shotgun. Eat leaden death, demon.’

There really wasn’t a lot more to come, as the walk was rapidly coming to a close. There was a nice ‘water point’ sign covered in moss, as a final highlight. 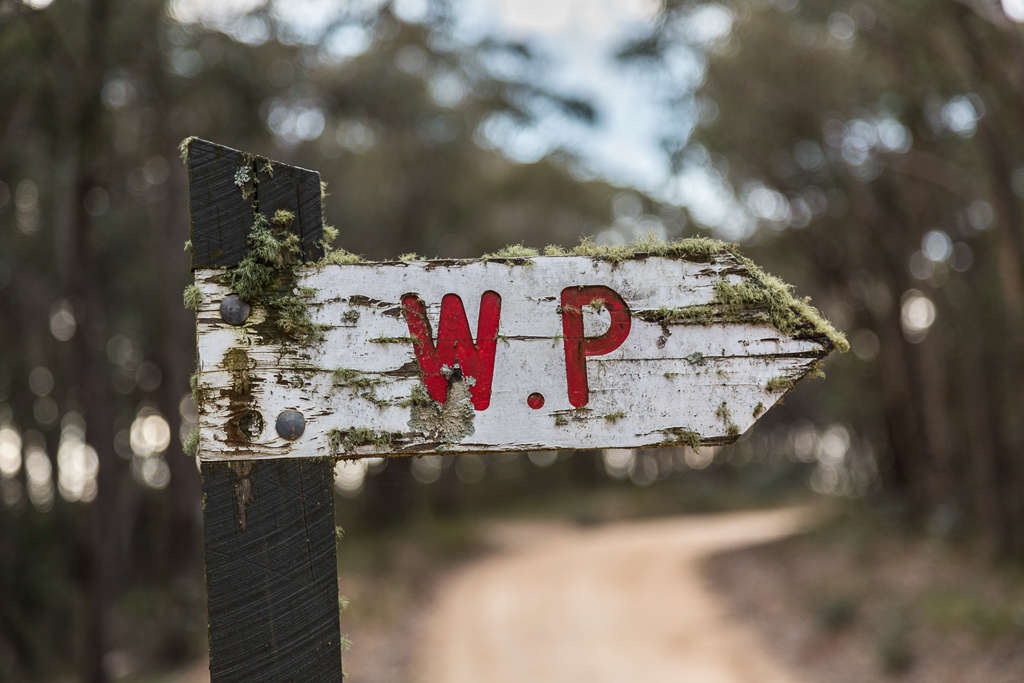 Then I found a track, which is a shortcut to O’briens Crossing where I started the day. Guess what the track is called? Yes, it’s ‘Short Cut Track’. There’s no mucking around with limp-wristed names in this manly part of town.

I continued on, with the increasing sound of duelling banjos guiding me back to the start. Before long I was among the crazed dogs barking and slobbering, whilst owners grinned, “He’s friendly!’ and the beer swilling hordes. What is this joint? If it’s like this in spring, I can only imagine how bonkers it would be in summer holidays.

I made it back to the car, threw the pack in and took off in a cloud of tyre smoke. The iPod shuffle didn’t disappoint with Martin Hammill’s ‘The Institute of Mental Health, Burning’ filling my ears, as O’Briens Crossing receded in the rear view mirror.

What can I say? Yet another walk done…