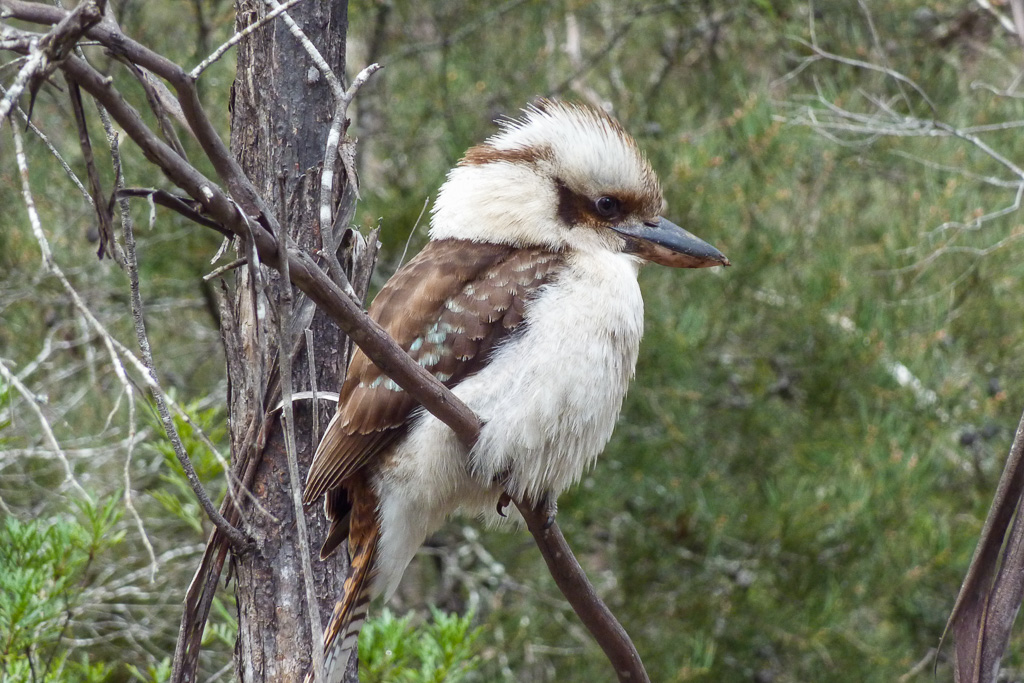 So, here we are. The final post of my Overland Track hike from four years ago. I’m not sure whether writing this up from scratch was the wisest thing to do, considering how long ago this walk was. After this I can now concentrate on something more modern. Like my Wilsons Promontory hike from three years ago.

Anyway, this is another entry which will fly by, as it appeared I didn’t take any photos. I’m not sure what happened, but I think it’s because I was facing the, ‘last day of a long hike blues’. There was also a more annoying experience during the day, which affected my mojo, but I’ll get to that in a minute.

The potential rodent assault within Echo Point Hut didn’t eventuate. A rat free snooze was a bonus and I had one of my best sleeps for the entire walk. Maybe it was the sound of a stream next to the hut, which helped create a peaceful sleep? Then again, was there a stream there or was it my tinnitus? Things looked a little different across Lake St Clair in the morning when I opened the door… 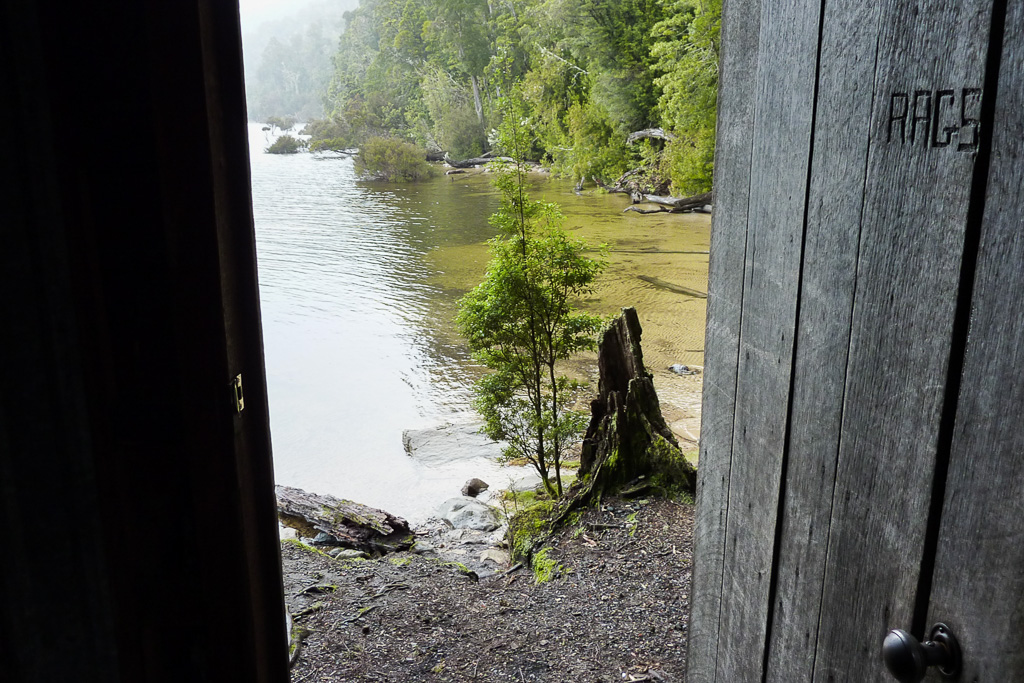 …as a mist had descended. 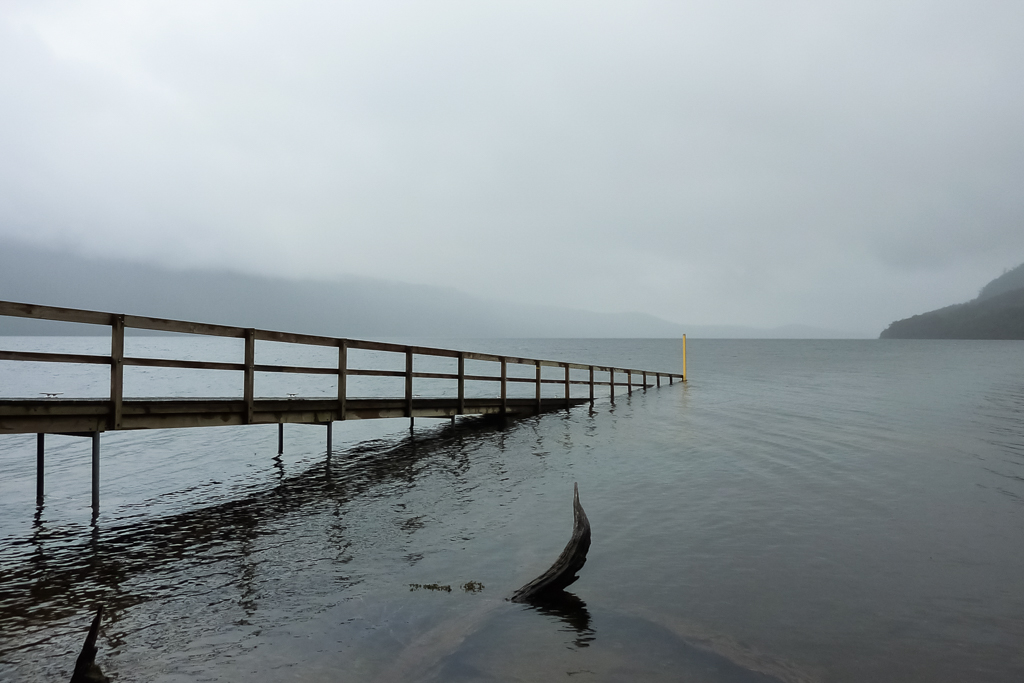 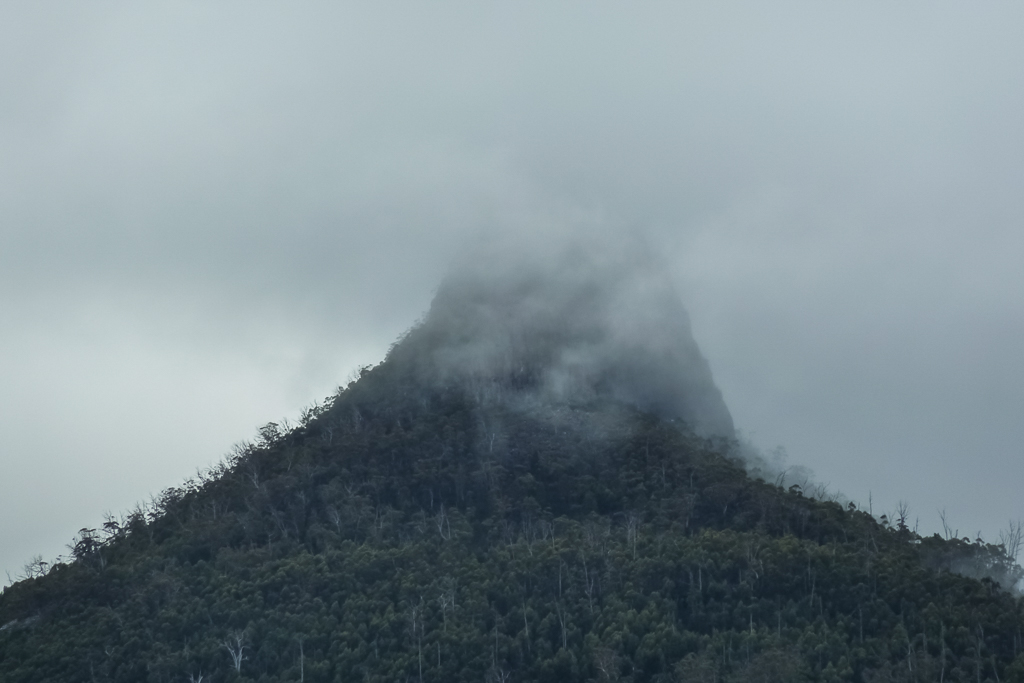 …not to mention the nearby hills. 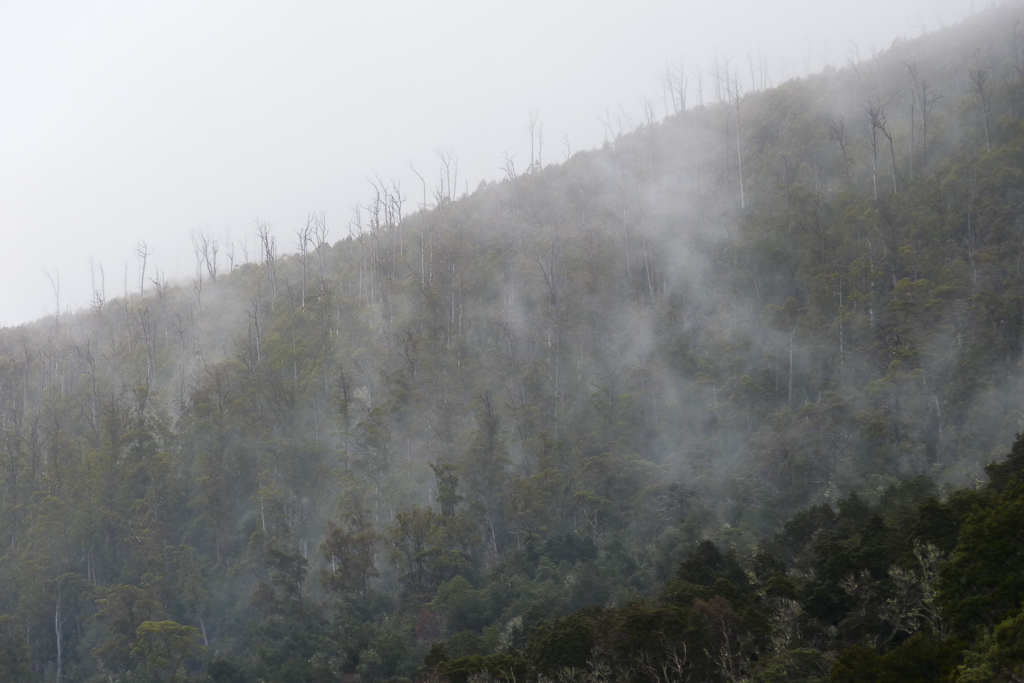 Breakfast consisted of everything I hadn’t eaten so far. I wanted to finish off the walk with the pack at its lightest, which meant besides porridge I had a risotto as well. A slightly bizarre morning meal, but it seemed to work. I now had only a 12 km or so walk from Echo Point Hut, along the shores of Lake St. Clair to reach the Cynthia Bay, Overland Track finish line.

Heading off, I was a little sad to say goodbye to Echo Point Hut. I took one last photo of it hidden in the trees, as I moved on… 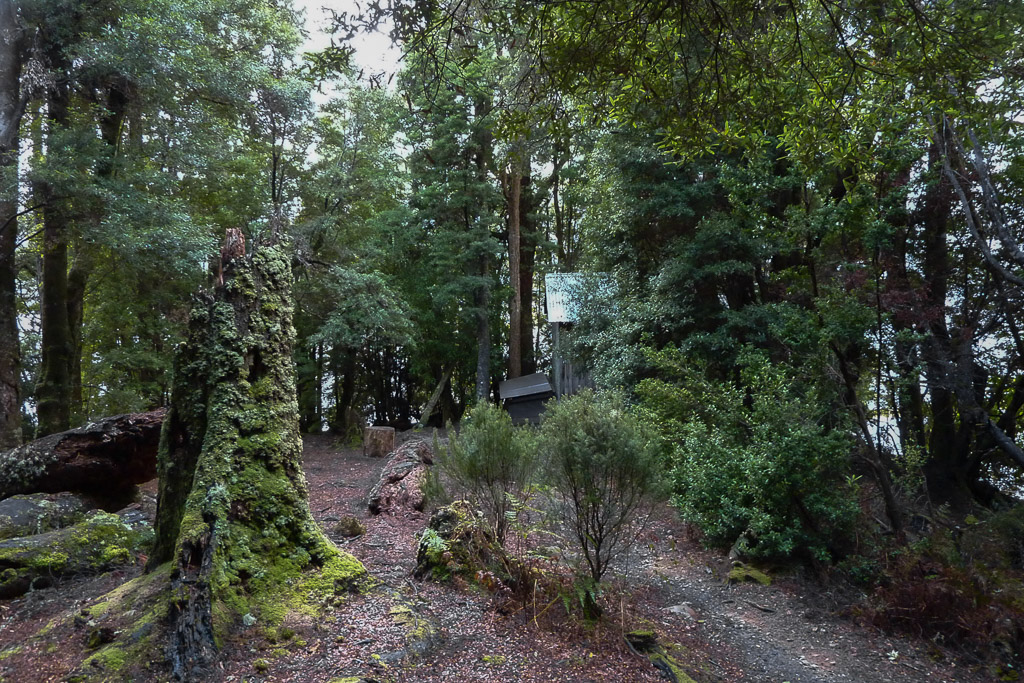 …and began to wander through some mud, whose depth was rated as ‘acceptable’. 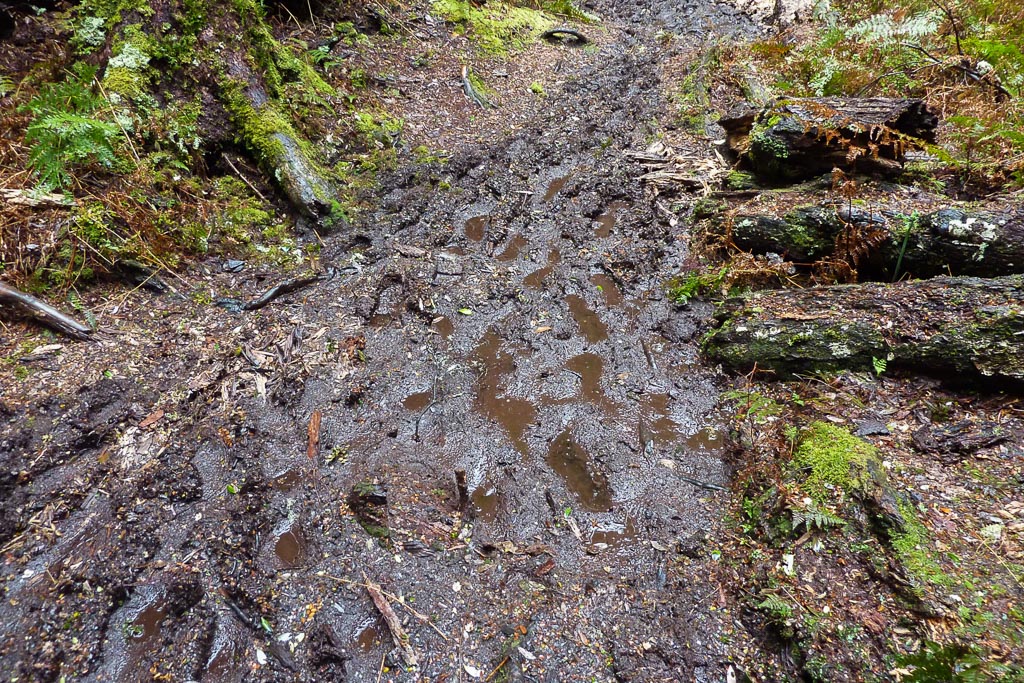 I mentioned earlier why I was losing my mojo on this day. An internal discussion went like this…

“…It’s beginning to rain, but it doesn’t seem too bad… Should I drop my pack and put the raincoat on? No, it’ll pass by… Hang on, it’s getting heavier and I’m getting quite wet… Best drop the pack and put on the coat… That’s better, get the pack back on and continue… Huh? The rain’s stopped? Mm… It’ll start again soon, I couldn’t be bothered dropping the pack again… Great, the sun’s out. Don’t worry, rain will probably return shortly… Okay, it’s not raining and the sun with the dampness in this forest is creating a lot of humidity. I think I’m about to drown from sweat… Drop the pack and get this bloody raincoat off before I expire from heat exhaustion… Phew… I can breathe again… Now, backpack on again and let’s get to work… What? I’ve taken my coat off and now it’s clouded over? It’d better not start raining again… YOU BASTARD, IT’S RAINING AND IT’S HEAVY. I WAS SWEATING TO DEATH AND NOW THE WIND HAS KICKED IN AND IT’S FREEZING. DO I PUT THE STINKIN’ COAT BACK ON AGAIN OR NOT…?!”

As you can see, I was suffering from the little known medical condition, ‘coat frazzled with an ellipsis twist’. It was now time to power on and just finish the walk off. The last day of a long hike is always bittersweet. On the one hand, I could sleep in a bed again, but on the other, I’d have to enter the inhabited world, which contains its share of pain. How about some examples? Noise. There’s nothing quite like being confronted with the noise of an urban area after a week out bush. Cars, barking dogs, cars, Mr Whippy vans, cars, dentist drills, cars, airplanes.

Now I’m sidetracked. Do you realise my stupid computer just told me it doesn’t recognise ‘cars’ as a word? Instead, apparently I wanted to say ‘cats’. Why? Because I wrote ‘dogs’, I must also want to write ‘cats’? What’s going on here?! Then again, is this the Twilight Zone? Have I woken up back in 1813 instead? No… hang on… I can hear something outside. What’s that sound? Oh, I know what it is. It’s the Western Ring Road with its eternal drone of traffic noise. It’s not 1813 after all and it sort of leads me back to urban sounds, where cars (not cats) are most offensive.

Back four years ago, I was making good time and about the only thing slowing me down was navigating a few uprooted trees. Some monsters had come down across the track. 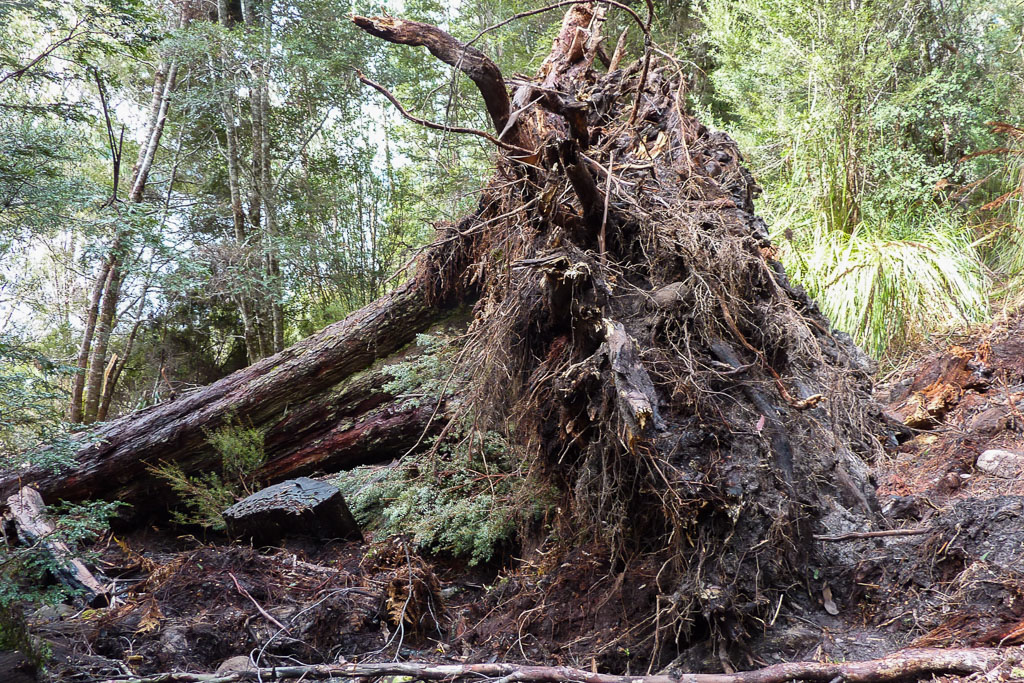 Remember way back to the start of this Tasmanian post saga? Apparently there had been some serious breeze the day before I started walking, leaving the Parks office blacked out. Maybe the trees I was coming across now were felled at that time? Really, I’ve no idea and am only guessing, but it’s helped pad out this post a little. In fact the sentence you’re reading now has no relevance to anything.

I continued walking and not a lot was happening, as the lack of photos shows. Eventually the track changes from a muddy, winding affair to something more like a highway. Then after crossing a large bridge… 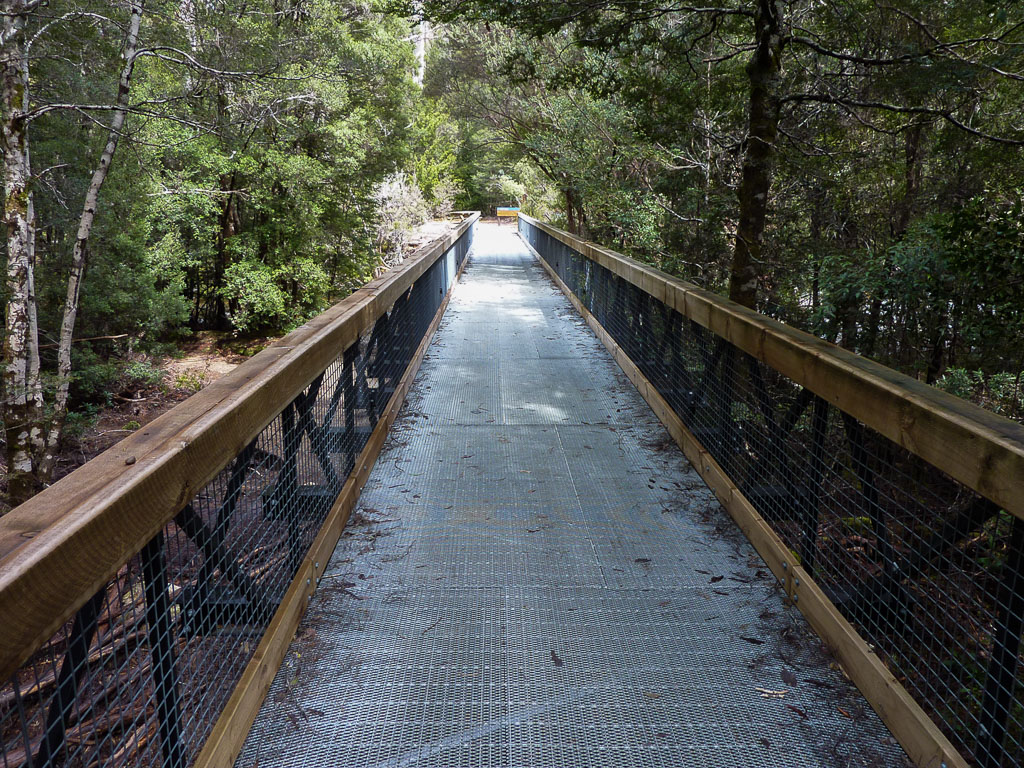 …the walk was done. I was at Cynthia Bay and surrounded by people who were clean and undertaking a strange activity. Talking. Having not seen anyone for a few days, I’d lost the power of speech. I strolled into the cafe and ordered a pie, but was unable to put together any legible words, so I just grunted and made hollering sounds whilst pointing at the pastry package, hoping the staff who seemed disturbed by my unshaven, mud covered stench, could understand what I was trying to communicate. I must have got my message across though, as I walked out with a pie, but I left wondering why the shop assistant was wearing a garlic necklace and waving a crucifix in my face.

Now what do I do? I was due to catch a bus to Hobart the following morning, so I had a night in ‘rockin’ and rollin’ Cynthia Bay. It never occurred to me there is absolutely nothing to do in Cynthia Bay if you don’t have a car. I could have saved some money by camping out for the night, but I decided I wanted to lie on a soft mattress, so I forked out $100 for a room in a place, which provided a bed. What else was in the room, you ask? No, that’s all. It was a room straight out of Stalinist Russia in its austerity.

I even had to walk to an outdoor shower block. Anyway, it was a nice shower, but on my return to the gulag my room, I lost a sock. I know this as I arrived home without one. No no, I had spare socks. Did you think I was so dumb, I didn’t realise I wasn’t wearing a sock??

A few days before finishing the hike, I imagined having a huge counter meal at a pub. The big, post-hike feast. Guess what? The cafe was selling only a handful of pies, which I’d already inhaled. (By the way, did I mention the pies looked like they were victims of an assault at some stage?) and tinned food, such as baked beans. Apparently there’s a pub down the road. Mind you, not within strolling distance. You need a car to get there. I considered a cab, but my phone didn’t work. No coverage. Mm… I considered walking to eat and trying to hitchhike back, but there were barely any cars around, so I gave up. So, the post-hike feast? Baked beans. Has there ever been anything more tragic than that comment?

Anyway, for what it’s worth, this was the read-out from my GPS for the week. 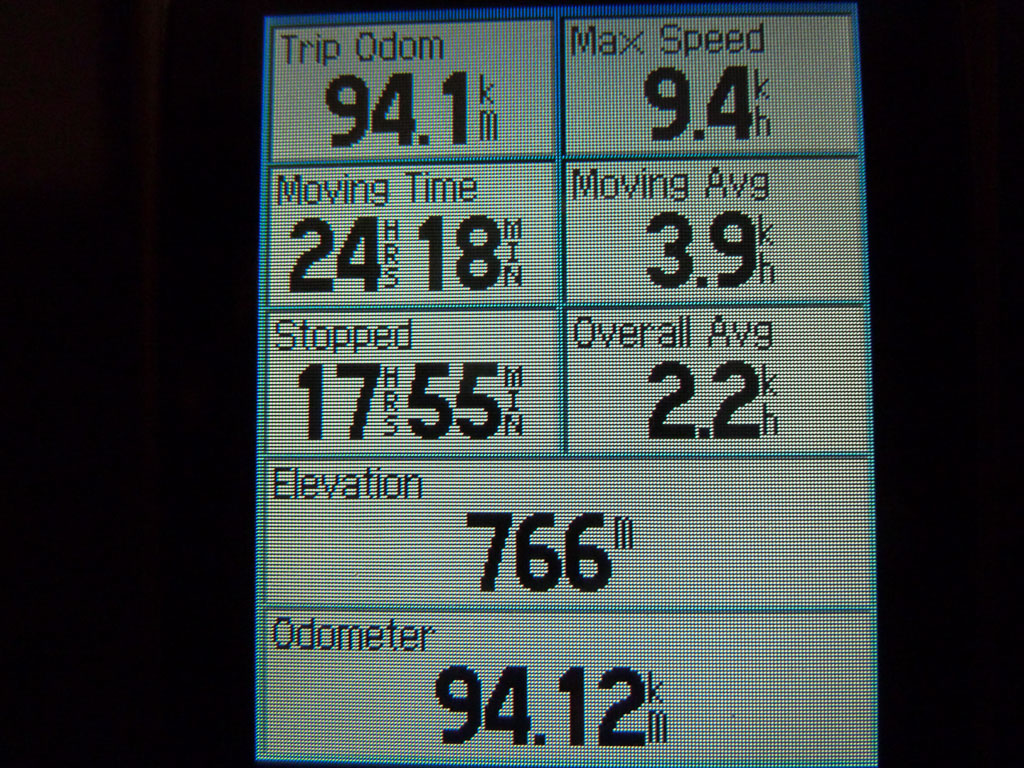 It’s interesting, but in a lot of the Overland Track literature, the official distance is 65 km. What? I’m not sure how a figure so low could be correct. I can only assume it stops at Narcissus Hut and doesn’t count the Lake St. Clair stroll? I did some side-trips I guess? A Cradle Mountain tilt, Lake Will, some waterfalls, but there wasn’t much else. Anyway, that’s how far it was for me.

There’s not much else to report, as I slept in my communist Russian bed and the following morning was up bright and early to get the hell out of Cynthia Bay. The bus wasn’t due until early afternoon, so I wandered down to the lake edge to kill some time. Again there was a mist around… 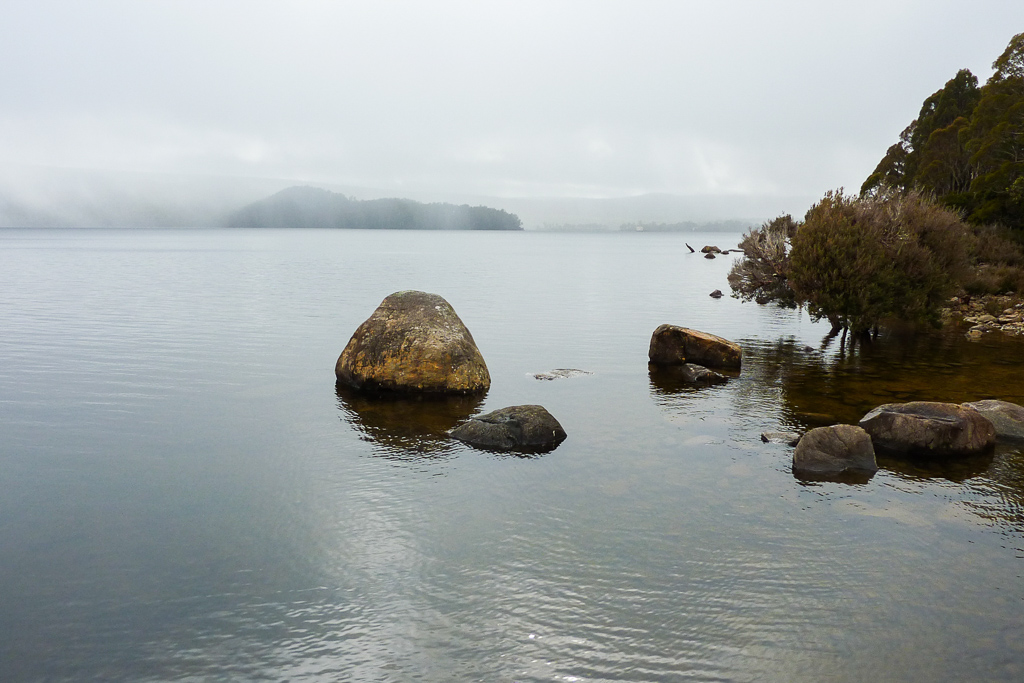 …and the lake was quite glassy with no wind around. 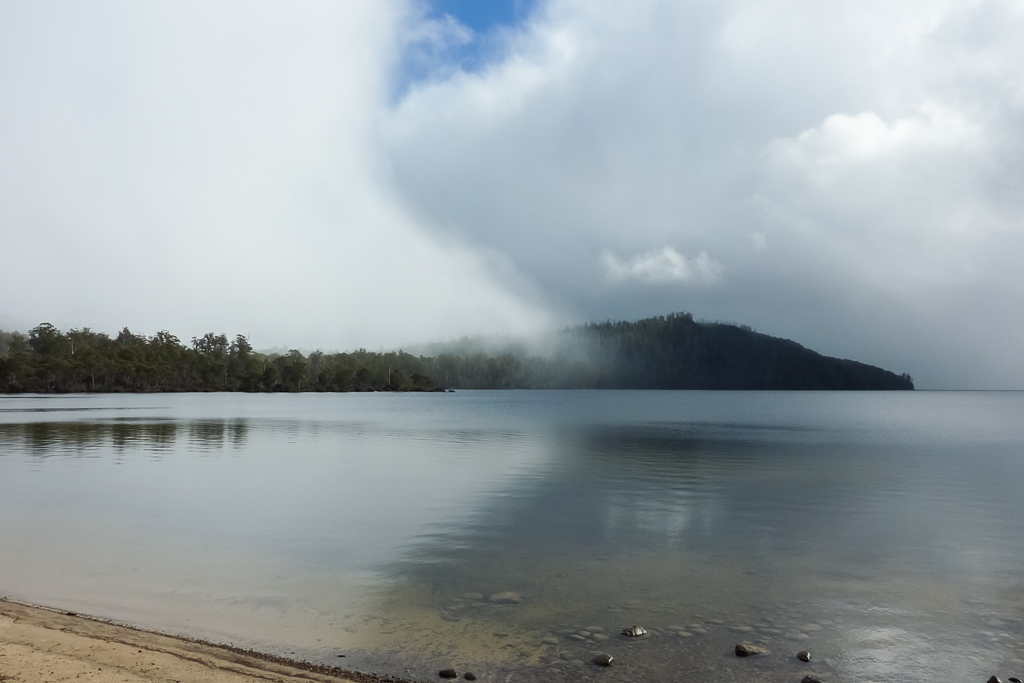 Mind you though, it was absolutely freezing. In fact it was so cold, snow began to fall. It may not have settled, but it was certainly an entertaining sight. Even more so when I saw this with the temperature hovering around 0 °C. Looking out at the boat jetty it appeared someone was half-naked. 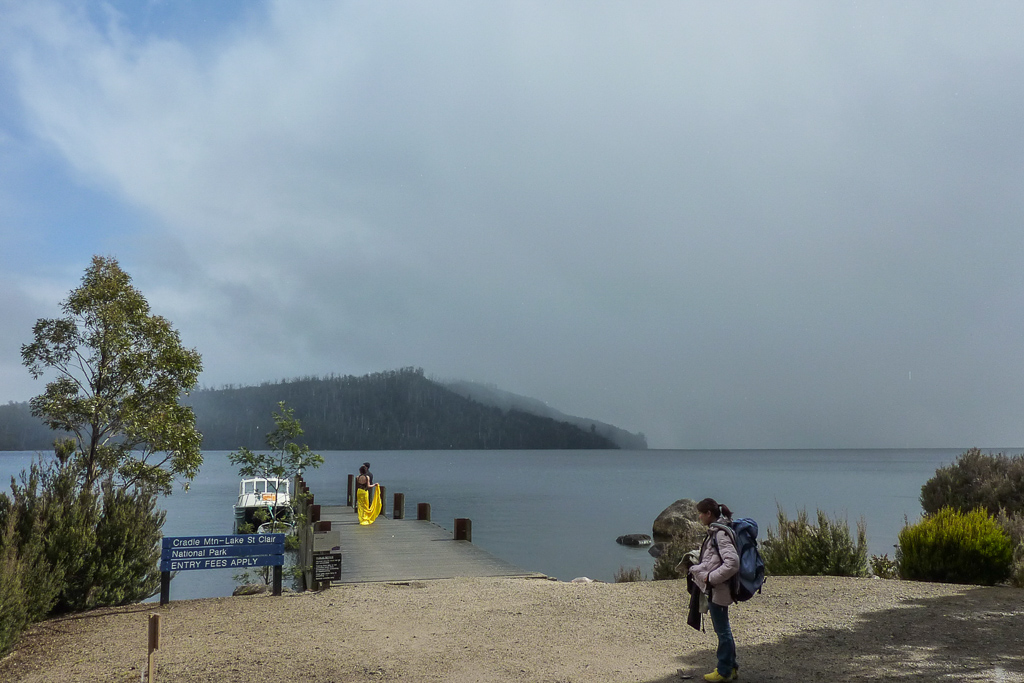 “No, I must be wrong”, I wondered, as I moved forward for a closer look. Yep, I was correct after all. There was someone wearing evening wear/just got married, which consisted of fine silk, whilst snow was falling. 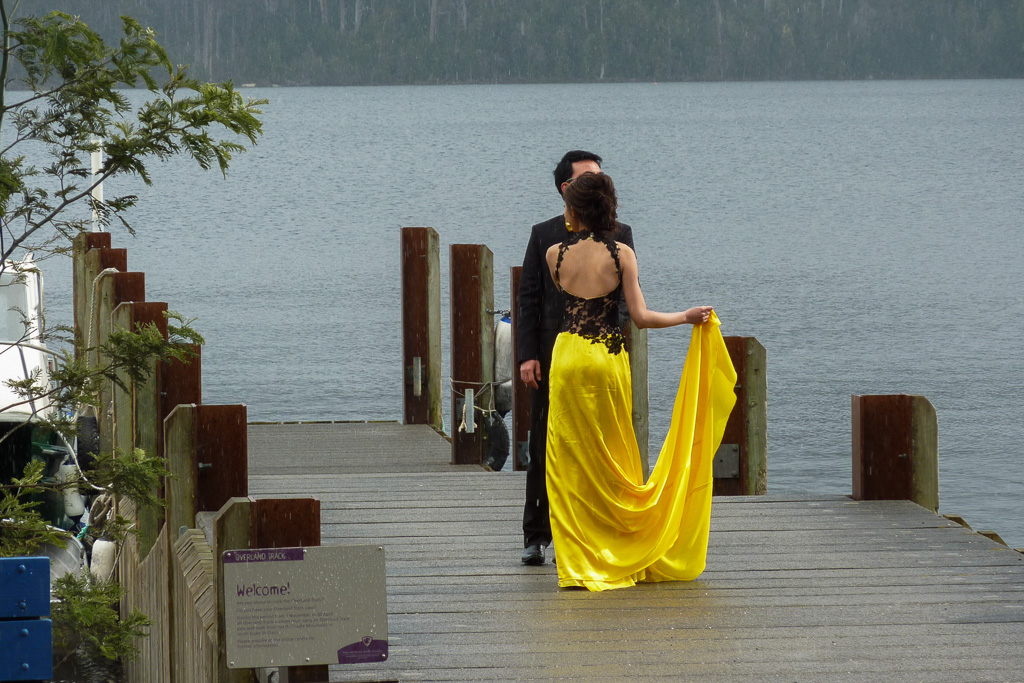 Okay, I’d seen enough for one trip. My bus arrived on time and I was whisked off to Hobart for a day or so, before flying back to Melbourne.

Do I have a wrap up post about this hike? I’ve no idea, I might, but then again if anyone really, really wants to know something, feel free to email me. I don’t mind an email or two, as it’s preferable to reading spam emails in my hiking website address from ‘Max Gentleman’. All I can say to Max is, can you stop sending me ‘SSS’ (secure a strong schlong) emails?

I did consider an entry about all the things I took, but a lot aren’t really relevant to stuff available these days. I could write another within the ‘What was I thinking?’ genre. That might be more entertaining to read, so I might tap out one of those in a few weeks.

So, it’s a great walk and I must have liked it, as I walked most of it again the following year with Ben. On that occasion we started at the Walls of Jerusalem and linked up with the Overland via the Never, Never (foaming at mouth) and headed back north to finish at Cradle Mountain. I’d like to get back there one day for a proper look at all the things I missed, but it seems time flies by and other things come up.

Anyway, heading back to Melbourne, there was one last bonus. I got the wing seat with the extra leg-room… 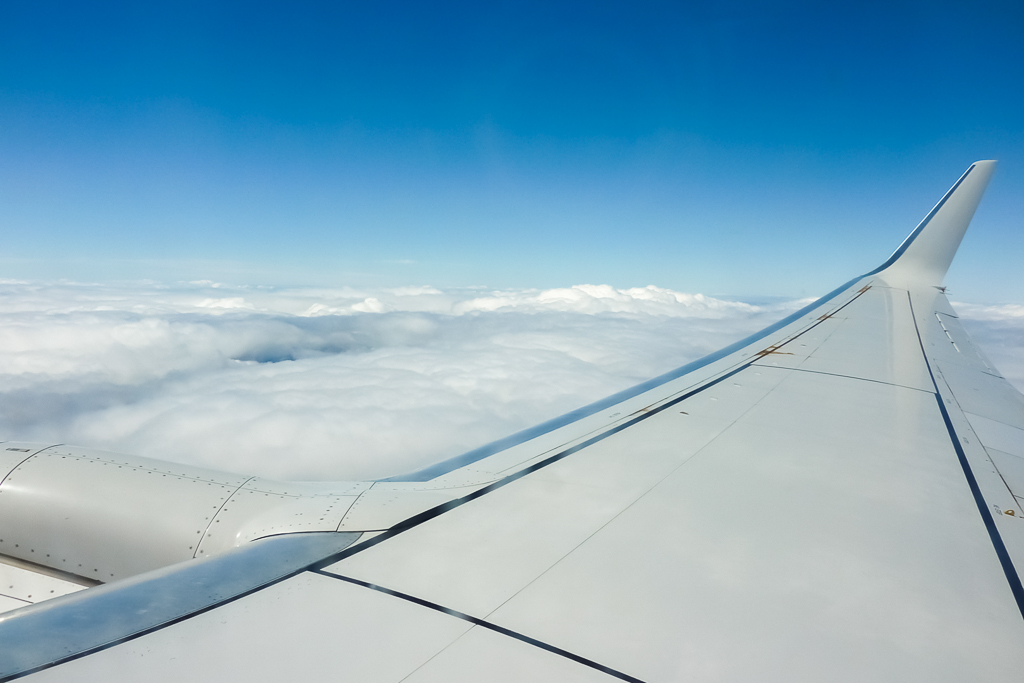