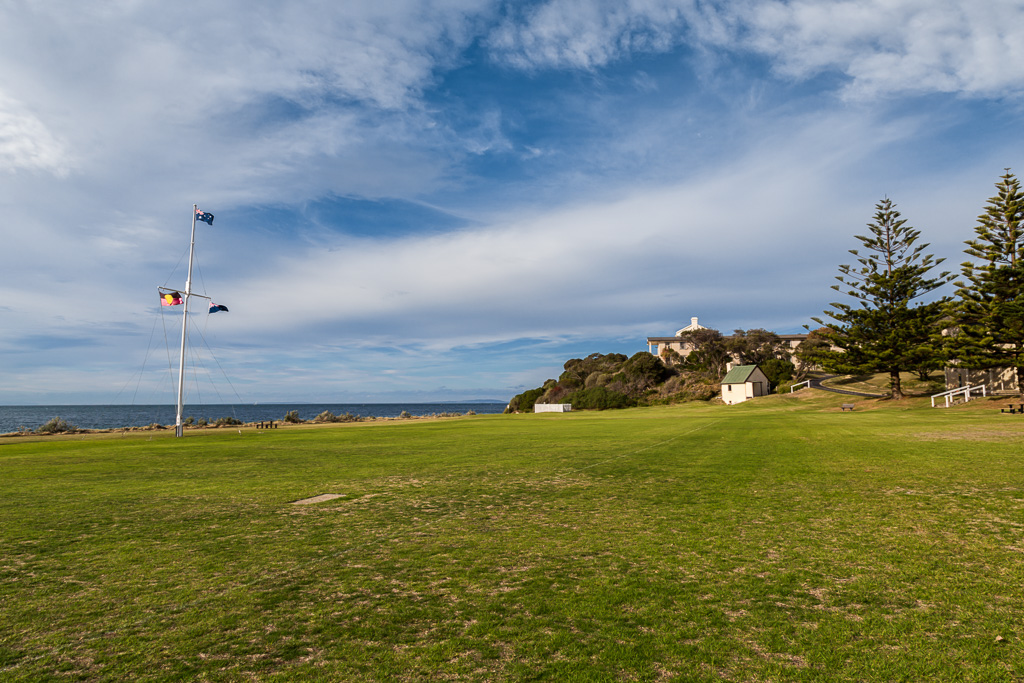 I’m sorry to say, but this isn’t a walking post. Instead it’s a follow up to all of the things I missed on my last visit to Point Nepean which are detailed in my previous post. Once I realised how much I didn’t get to, there was no other option, but to head back down a few days later. Oh yeah. last time I’d covered Fort Nepean quite well, but there was a lot more to see. Somehow, I’d missed a memorial to Harold Holt at Cheviot Beach, the Monash Light Tower, London Bridge and the Quarantine Station, Point Nepean.

There was a bit to do, but I was still hoping it’d only be a hit/run mission. Maybe.

Before I get to that, I should complain about a few things. It’s pretty rare for an entry of mine not to contain some sort of whinging. Well, what do you expect? I’ve English heritage, so it’s in my DNA. Firstly, I have to apologise to the hundreds of thousands of Russian readers of my blog, as I may have taken the piss out of your country a fair bit in the last post. I’m sorry, but I feel compelled to, as 110% out of 100% of spam I receive comes from your country. That peeves me a little, plus I’m tired of your president running around with his shirt off flaunting his man-cans. Come to think of it, is this the worst apology you’ve ever read?

Next up, I should complain about my eyesight. It was only five years ago I had supernatural vision. I mean, I could spot a beach ball at 10 metres. No problem at all. Now, any form of reading within five feet requires glasses. I tell you how bad it is. Today I saw something written, which I tried to read without my Coke-bottles on. I swear the sentence said, ‘Love is like chicken’.

When I read that, I nodded my head in approval. “Yeah… chicken…”. It was only when I put my glasses on I realised it actually said, ‘Love is like oxygen’. What a bummer. The chicken bit sounded so much better, as I was feeling hungry at the time. Anyway, I guess I should sum all of this up with a quote which I feel is quite relevant. “I’m just going outside for some chicken and I may be some time.”

Now, this Point Nepean business. I did my monumental drive from the western suburbs again and headed down the Mornington Peninsula, passing the seaside suburbs of Dromana, Rye and Multigrain (when I told Ben about that joke I just replicated from the last post, he just shook his head and said, “You know what? Your blog used to be good.” Tough crowd), before powering through the front gates of the park.

My main aim for the day was the buildings at the Quarantine Station, but I thought I’d leave them for last. Have you heard that theory before? Instead, my first port of call was the Harold Holt Memorial. I’m not sure how I missed it the first time, as all it took was a 10 minute walk before I was staring at it. You know what? I don’t think I missed much. Anyway, just so you don’t nod off, I’ve jazzed up the photo to make it look a little more interesting. Here it is… 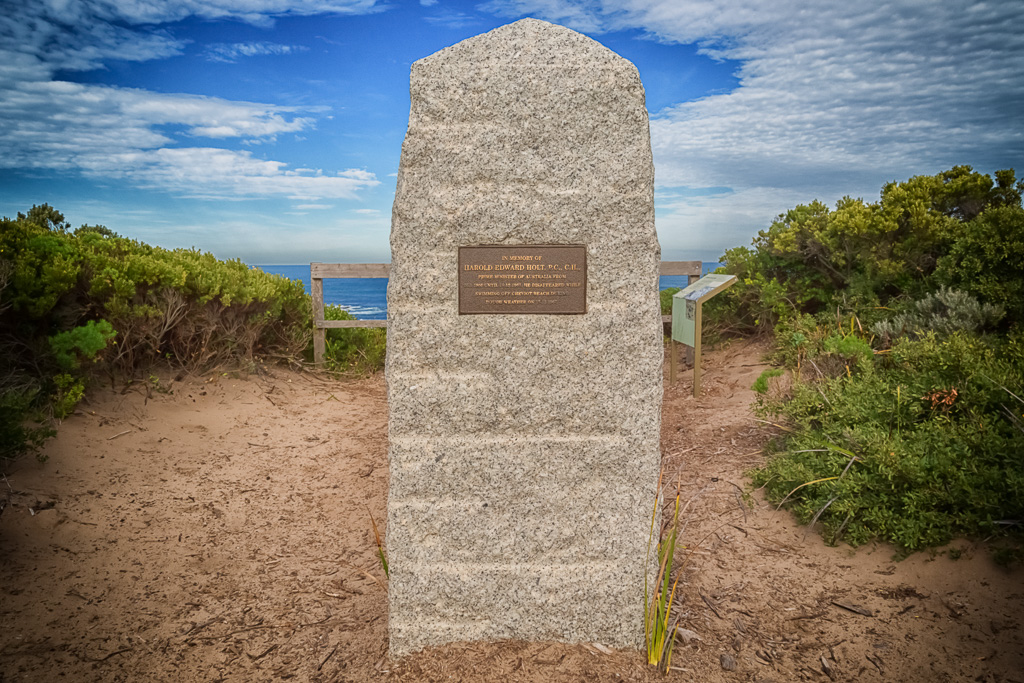 I suppose it couldn’t be any fancier? Upon staring at the plaque for 0.7 seconds I was ready to move on, until I noticed a track leading down to Cheviot Beach. Yes, the track was behind a gate and it appears access is discouraged, but being a man of mayhem who wears a beanie indoors as his ears get cold, I was going down for a closer look. 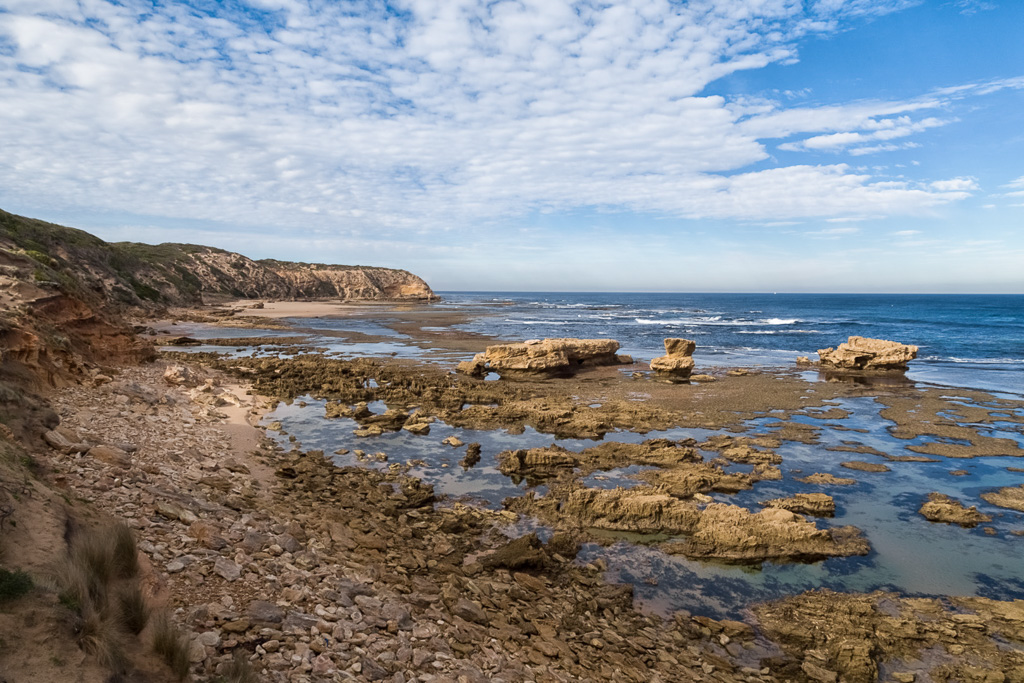 Strolling down I made it to the ‘beach’ and admired what a great place it would be to go for a swim on a day when the ocean is rough. Exactly how it was when Harold thought he go in and cool off. Come on, you’ve got to be nuts when you look at the place up close. 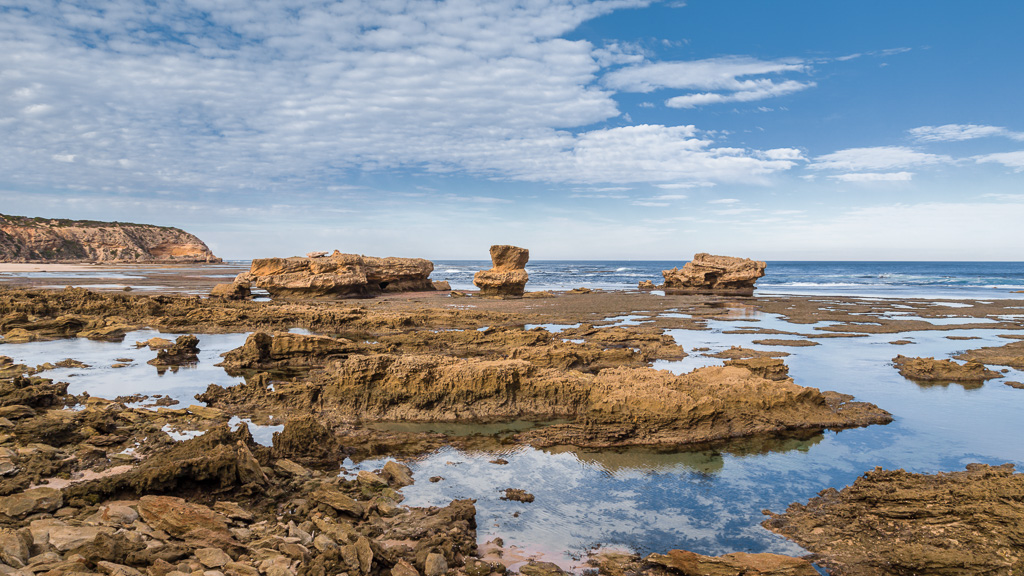 Apparently it’s safe to swim around the jagged rocks.

I was disturbed by the amount of rocks to negotiate and there really wasn’t much to look at. The only ‘treasure from the deep’ I could find was a thong. Remember, for you blokes in the States, a thong is what you call a ‘flip-flop’, just so you don’t get it confused with the garment I wear in the office. I checked out my find and concluded it was too small to be Harold’s. 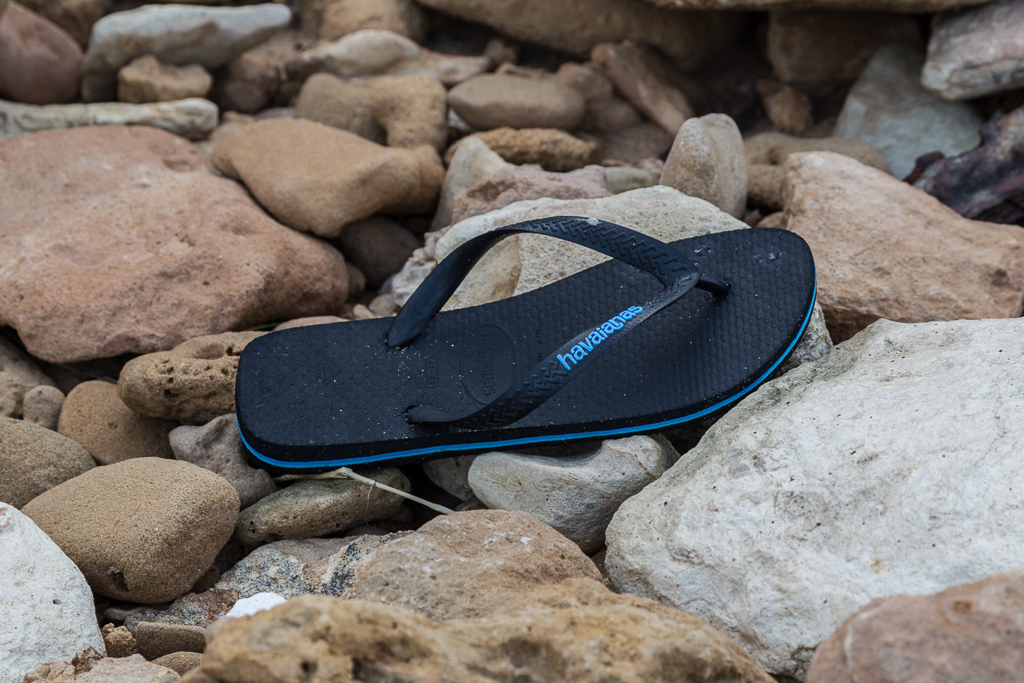 Mm… Done. Now what? The ‘Monash Light Tower’ was next on the menu. You know what? I was looking around online to let you know exactly what this tower is, but I couldn’t find anything definitive. All you need to know is it was part of the old defences, which has closed, but now has an additional tower for maritime navigation. The lure though is it’s a lookout, so it was essential I got up there to look out.

I took the main road before turning off up a hill… 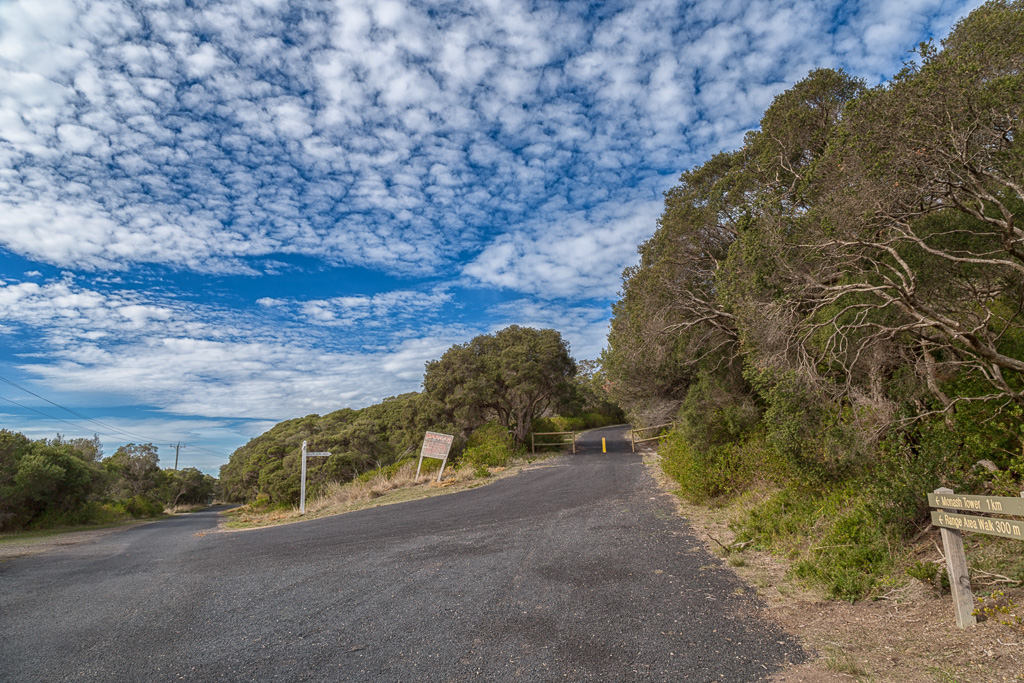 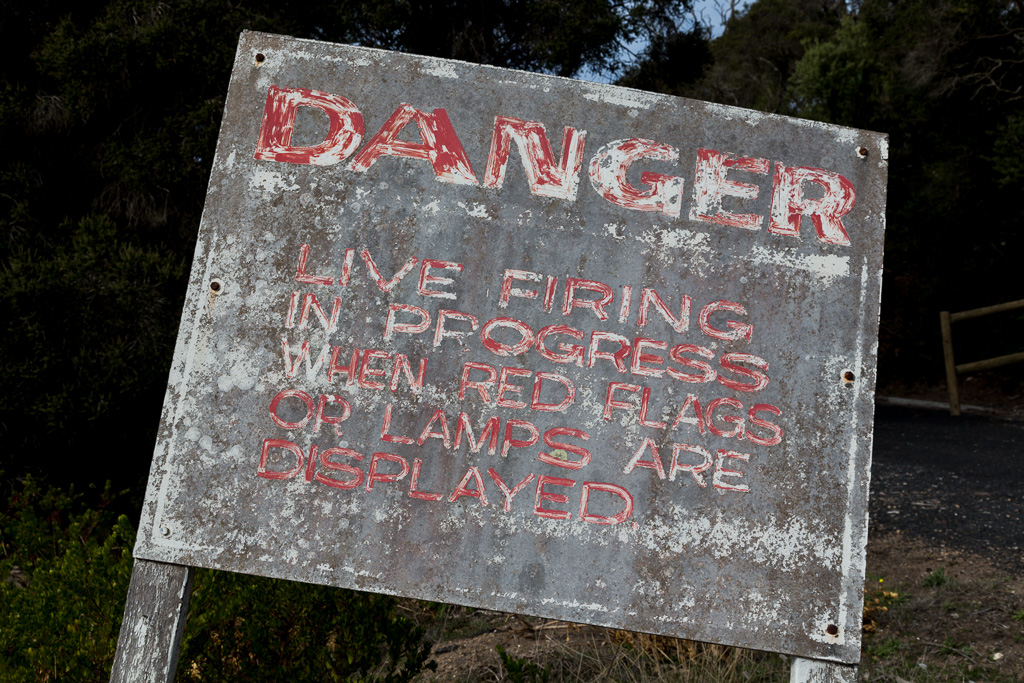 The place has been cleared of any old munitions lying around, which is disappointing for my ‘mantelpiece bomb collection’. About the best I could find was the remains of a case and primer for a cartridge. 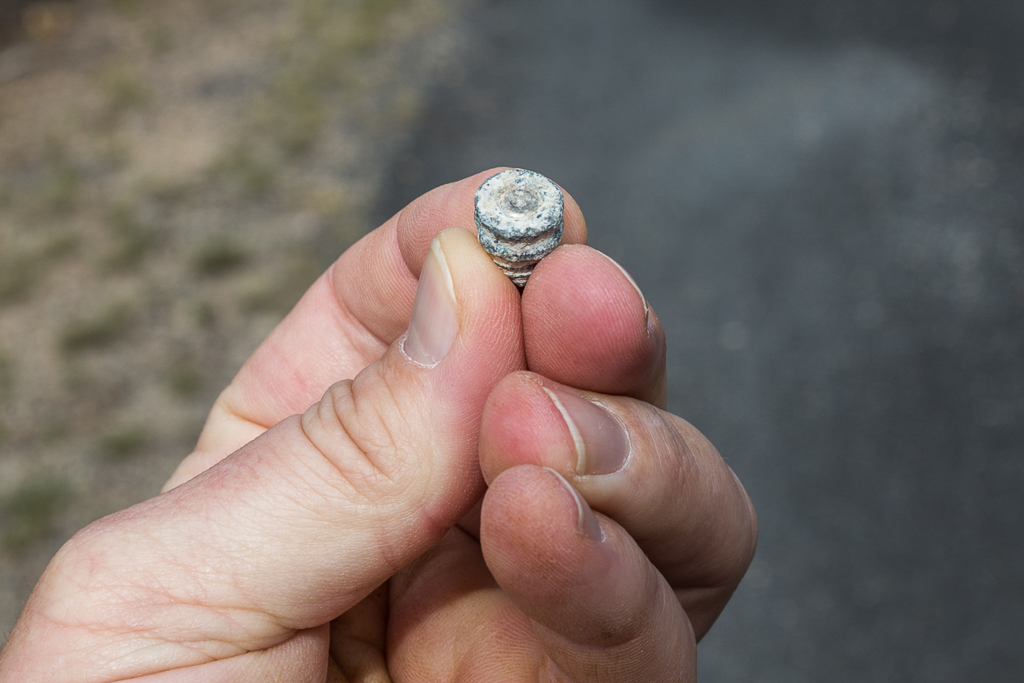 Are my fingernails clean enough to be online?

A short distance away sat an old rifle range, which is still overlooked by the disused range control tower… 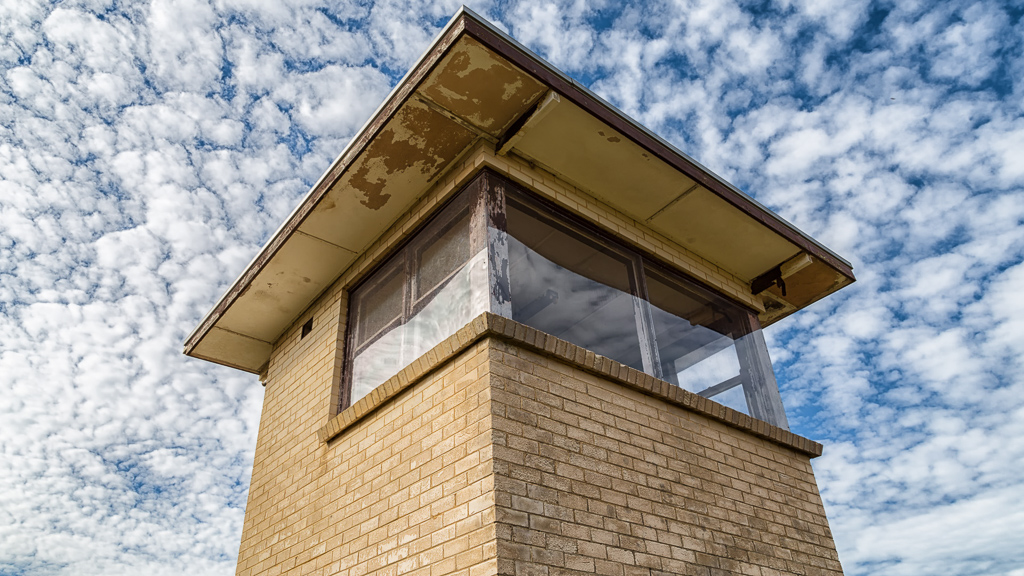 …and although this should be a munitions fossickers paradise, about the only thing I could find was this threatening bin, which had been successfully dispatched. 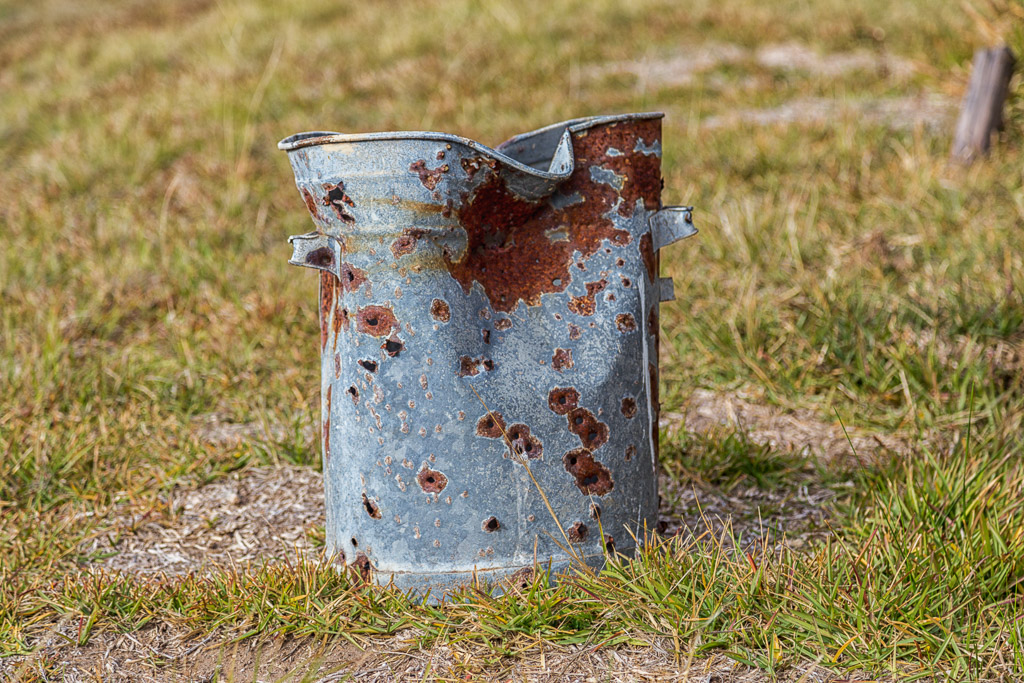 Moving on, I strolled up a sandy track, which included one of my better ‘finds’ for the day. I’ll tell you what this is. It’s a 7.62 mm, plastic blank round, for an SLR. I know this because years ago, I reckon I fired a million of them. 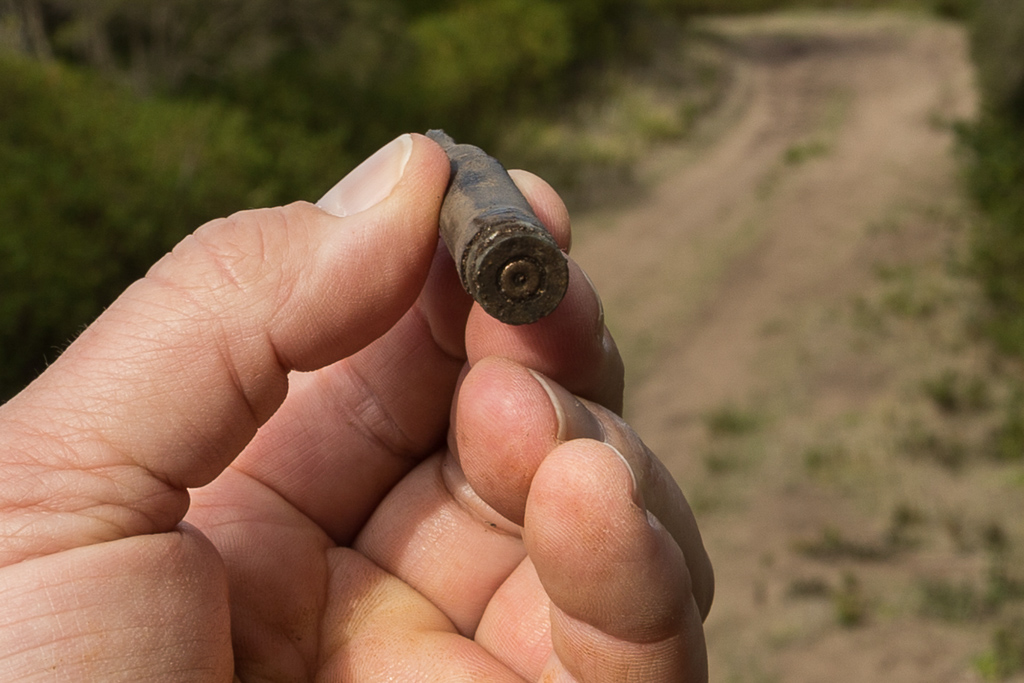 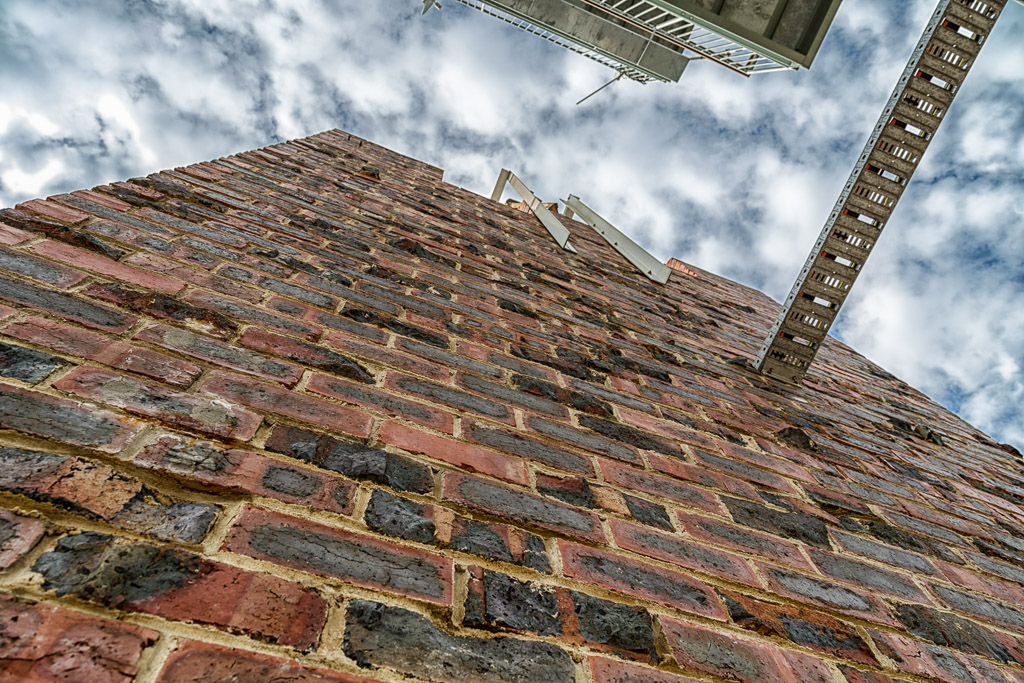 …but it’s been taken over by all sorts of attachments. A brand new metal tower covered in navigation equipment is open to be climbed, so I clambered up to the lookout. The Quarantine Station is visible, but otherwise the view is fairly ‘structure free’. 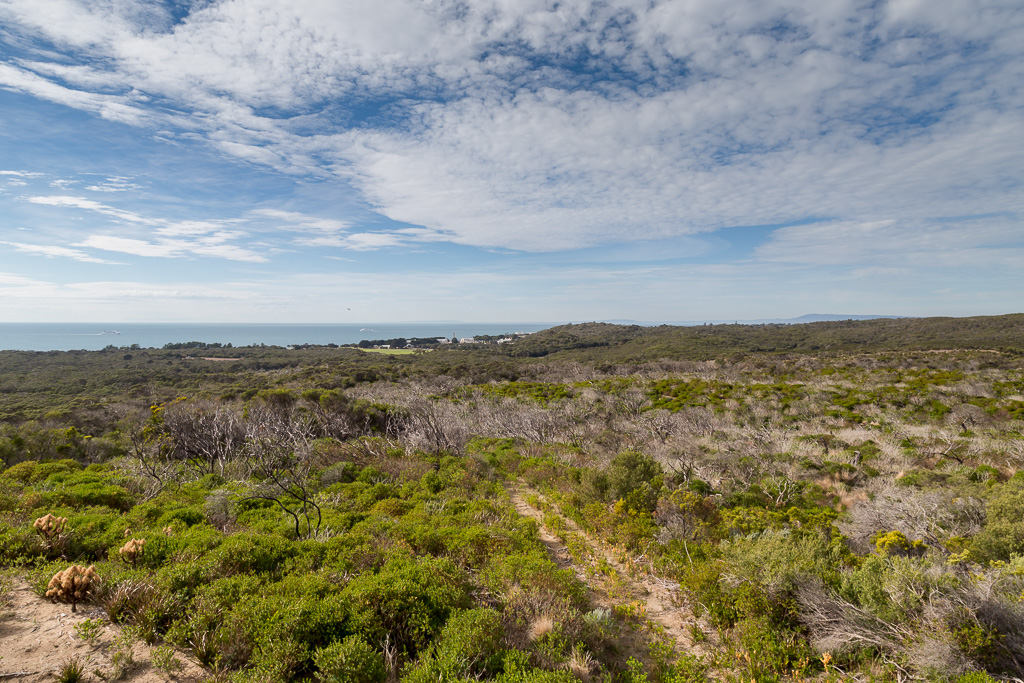 What is disappointing though, is the tower continues to climb a few more flights of stairs, but IT’S BLOCKED OFF. I hate seeing things higher than me, which I’m not allowed to climb. Just that extra height may have added to the view, but as it stands I’m going to die wondering. Not unless I come back one night with some sizeable bolt cutters to lop off the padlock securing a gate across the stairs. Anyway, it was fairly breezy at my low lookout, so I hung out the Kestrel for a weather reading. 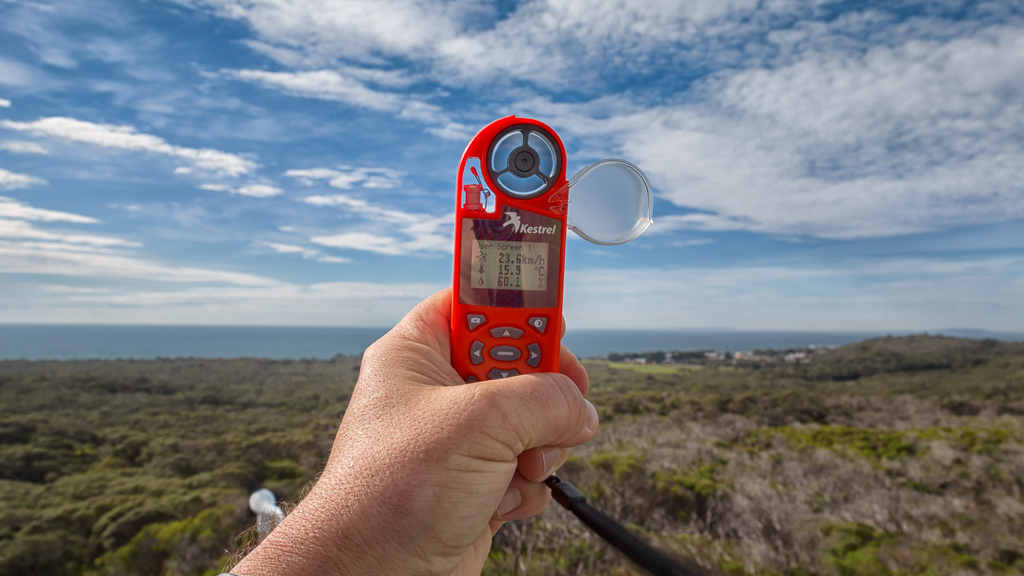 You know what? It felt like it was blowing a gale and my mullet was flapping in the breeze, but the wind speed was only 23 kph. Wow. That’s probably the wimpiest speed I’ve ever seen. I hope the next time I show you the Kestrel there’ll be a reading a bit more than a gentle breeze.

Well, the Monash Light Tower was done. What’s next? I guess it’s time to check out the Quarantine Station. I strolled back down the bush tracks, passing a mushroom which had successfully risen above the mulch on the path… 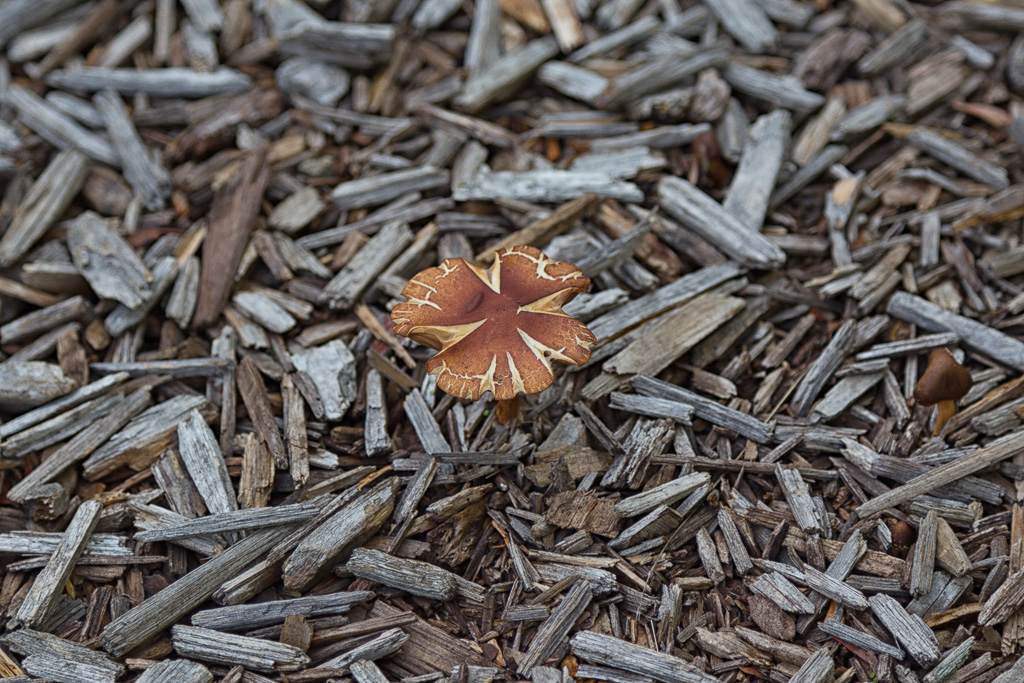 …before popping out at a remarkably healthy looking 25m rifle range. The gun supports are very up-market, as from memory all I was given to use were sandbags. 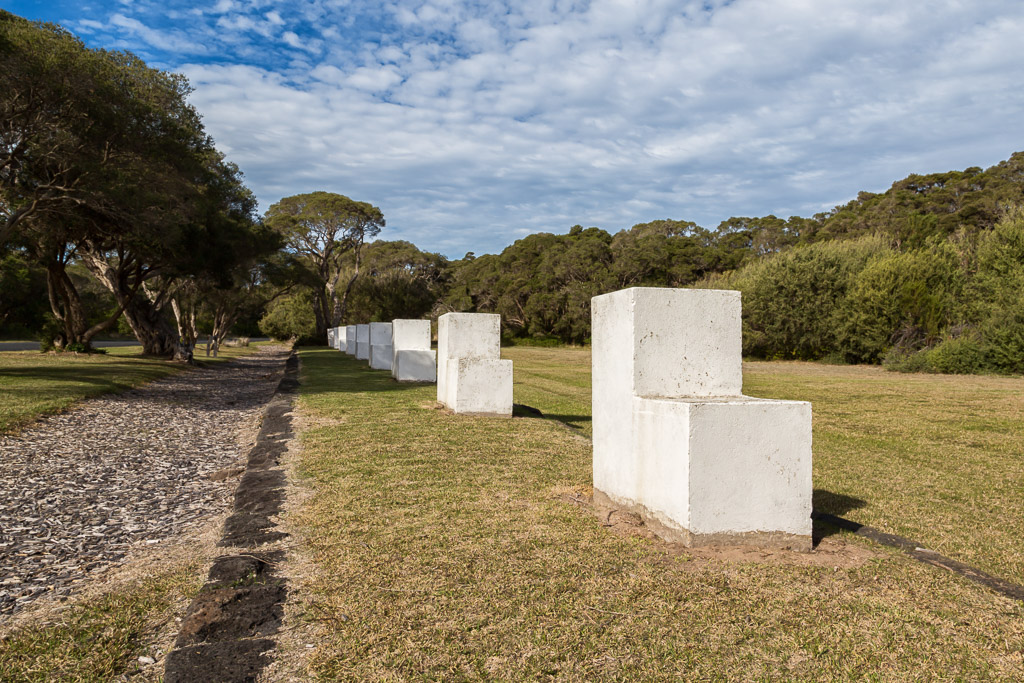 Strolling on I reached the Quarantine Station. This is the area up for development, so who knows what it might end up like in a few years time. I can imagine it’s less likely you’d be able to wander around aimlessly looking at the buildings for a few hours, if any of them are converted into accommodation. Anyway, here’s the old hospital. 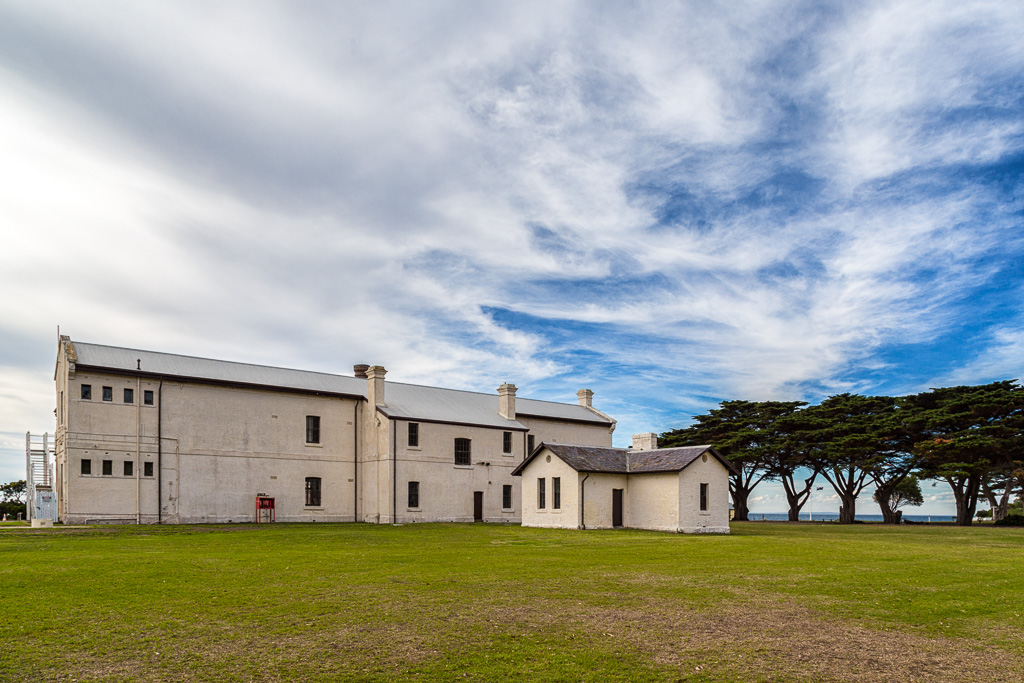 A lot of the buildings are closed, but most of the larger ones are open for wandering. What I was after though, was the oldest structure in the place. ‘Shepherd’s Hut’ dates back to the 1850’s, so I tracked it down for a photo opportunity. It’s not a bad little place, but unfortunately the door was locked for ‘renovations’. 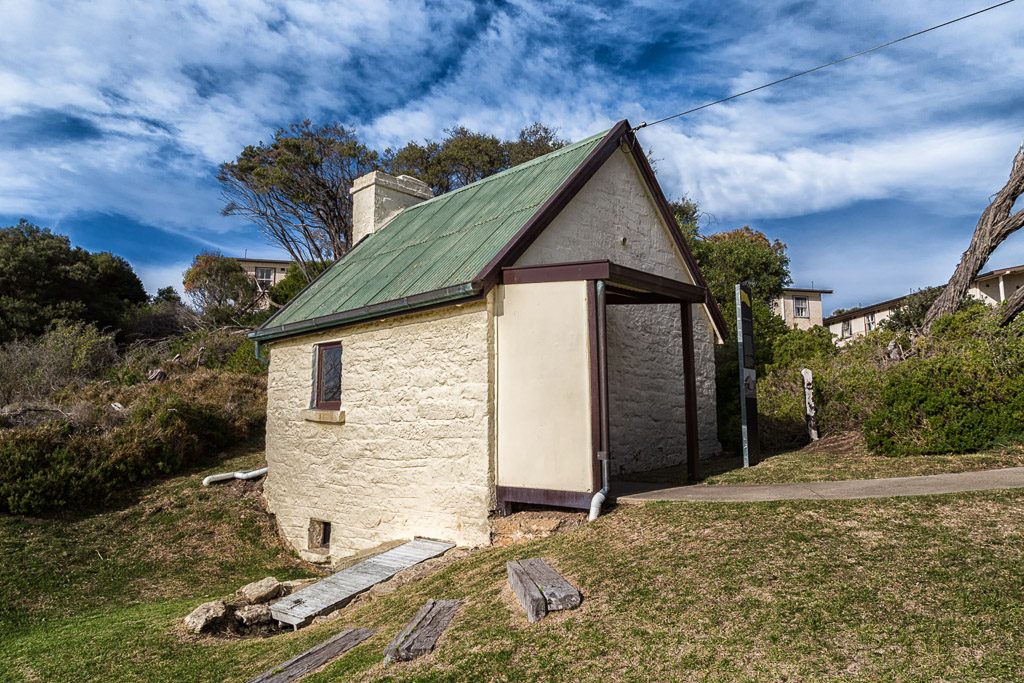 Mm… Anyway, next up I was keen to get inside the ‘Disinfecting and Bathing Complex’. You can’t miss that, as it’s the one with the enormous brick chimney… 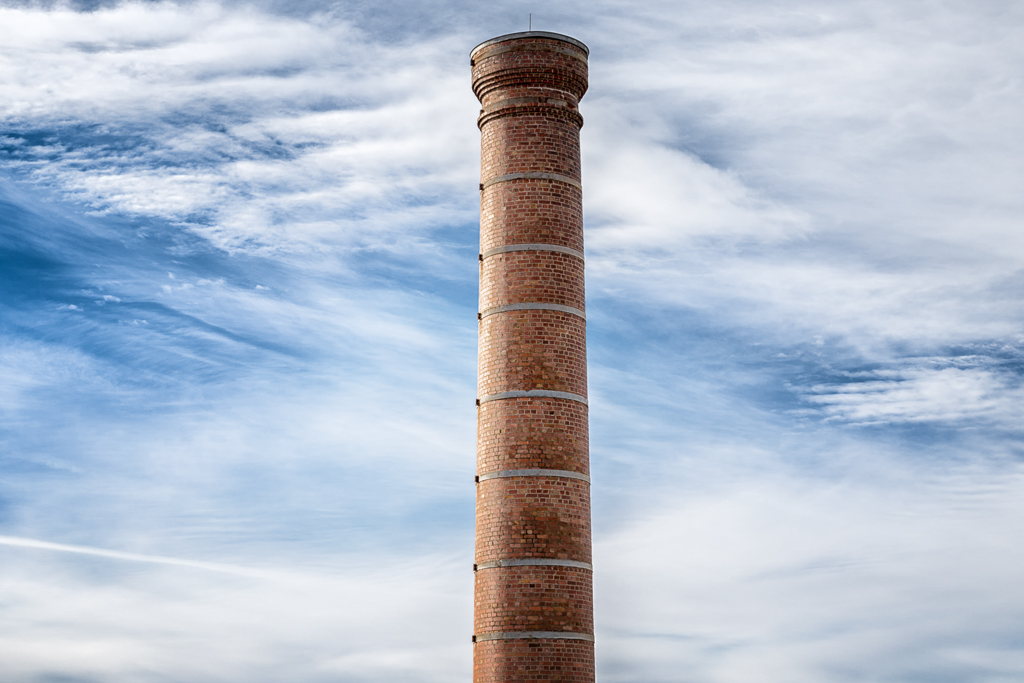 Inside it does have a bit of a sinister feel about it, with old disinfecting machines still set up. Not to mention a door with so many locking pins, I reckon you could drop it to the bottom of the ocean and it would still remain secure. 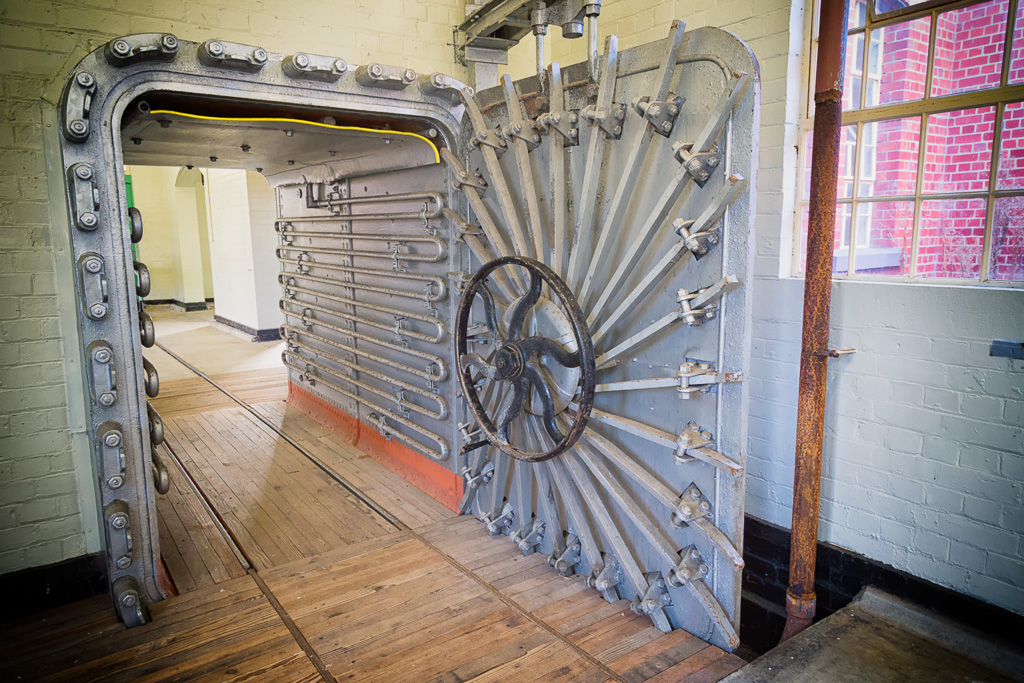 Wandering around, there were some suitcases ready for fumigation. Mm… Wouldn’t they have to be opened for that? I’m not sure, as the signage was fairly limited. 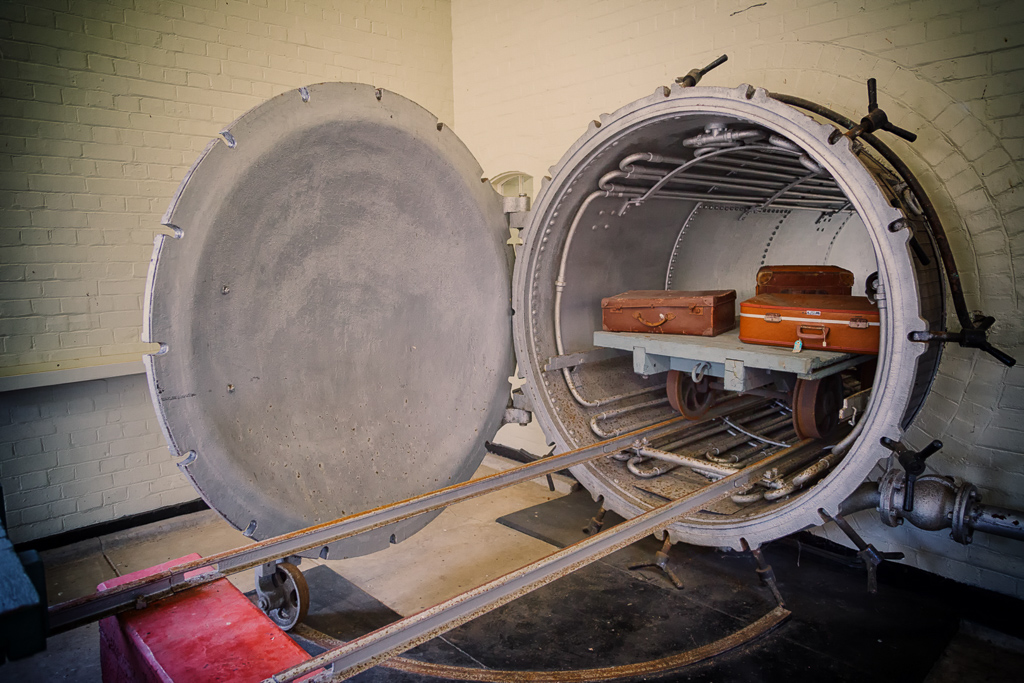 The railway style dolly was used to move the arriving passengers luggage quickly through the complex. 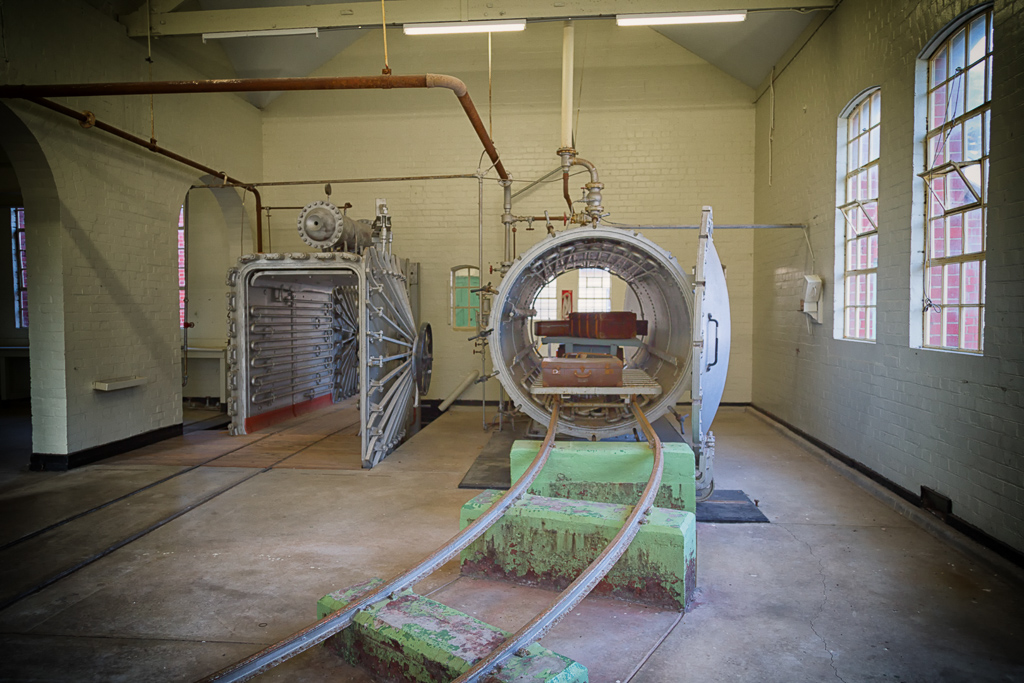 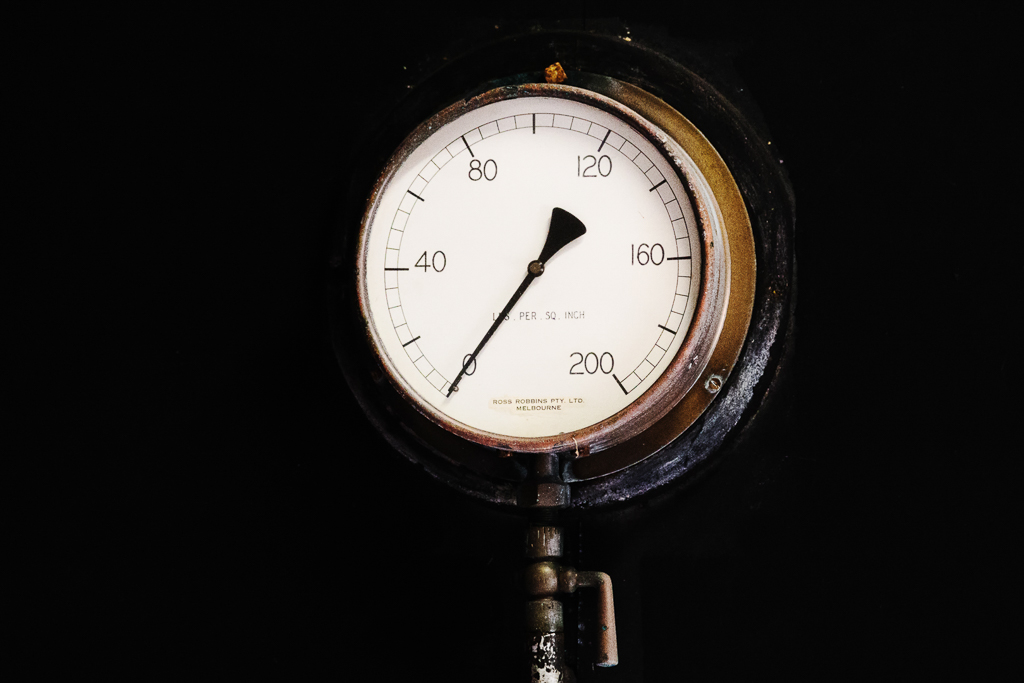 …before heading back outside where it was a bit warmer. There’s some nice looking buildings around and I spent some time wandering around. 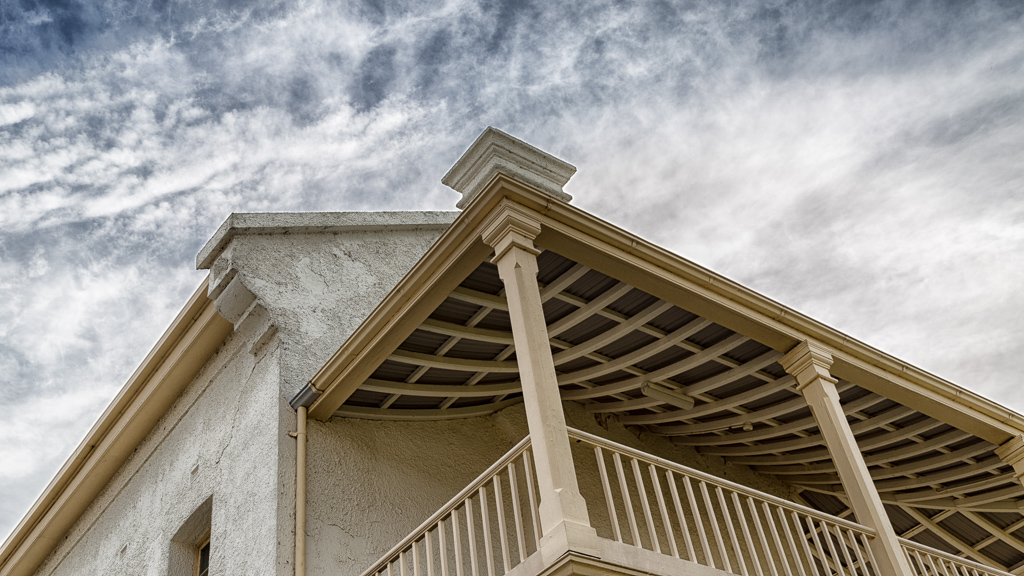 Also, nothing beats a parade ground for creating a decent lawn. 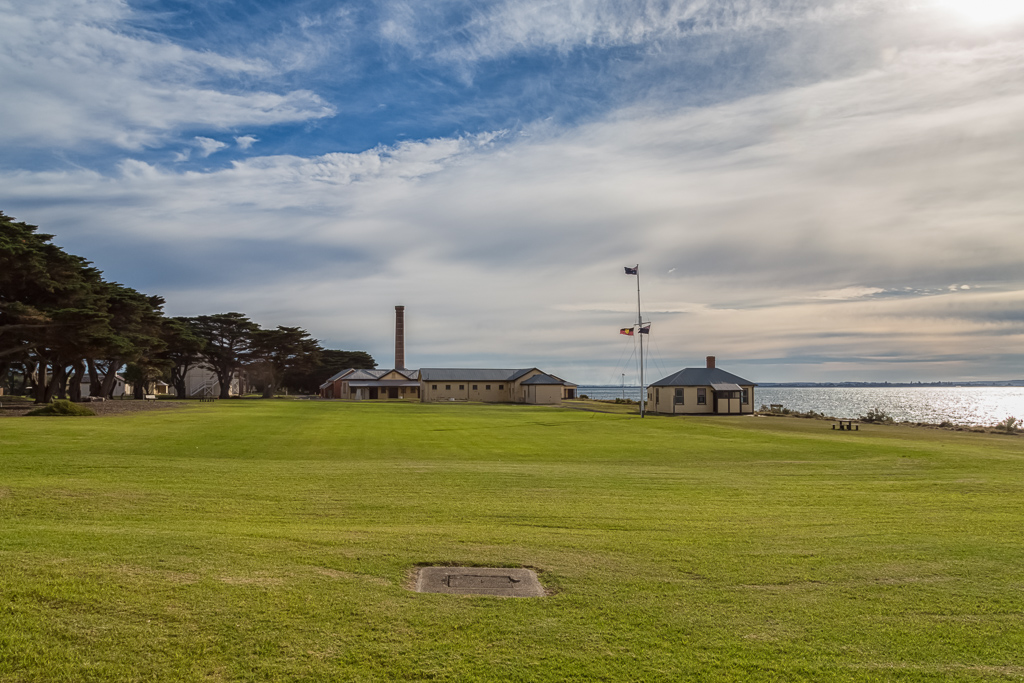 I could show you another million photos of the buildings around the Quarantine Station, but I’ve just spent an hour looking at them and they’re all starting to look the same. Is that it then? No, of course not. There was one more short walk to knock off, before I could claim Point Nepean as conquered. This was a short distance outside the park to a coastal feature called ‘London Bridge’.

It was getting late in the afternoon when I set off, but after a few undulating kilometres I’d reach the other side of the peninsula and the London Bridge lookout. What I didn’t know was the artist John Perceval painted a picture called ‘Quarantine Boundary, Portsea’ in 1957 from the area where the lookout is now. Here’s the painting… 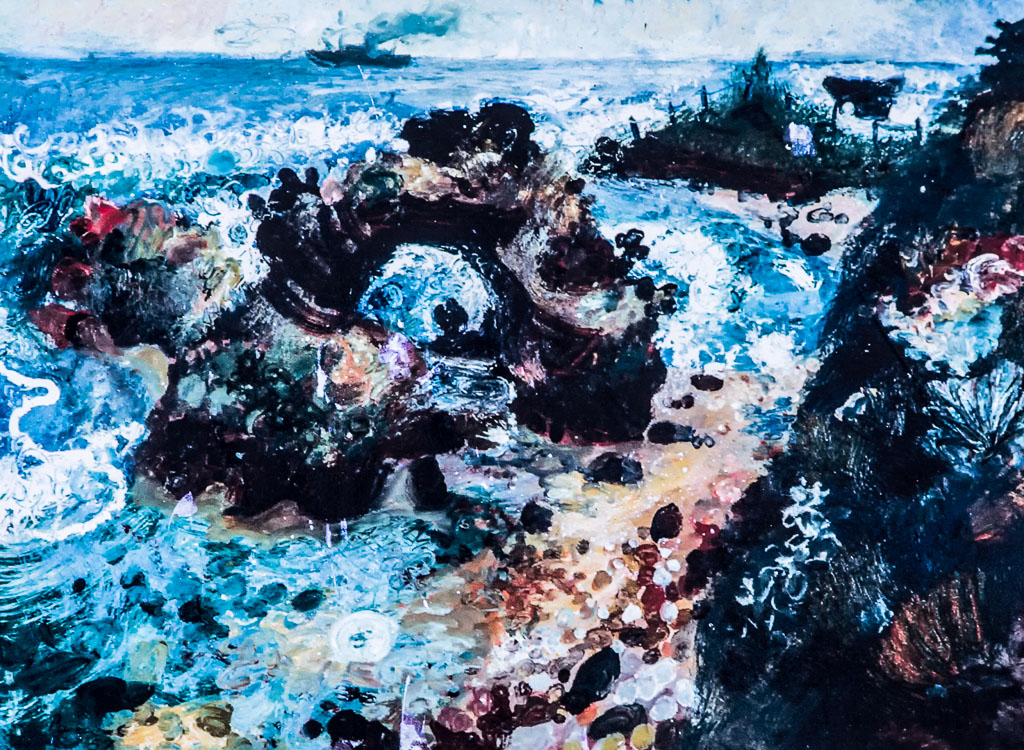 …and here’s ‘London Bridge’ from the same spot. 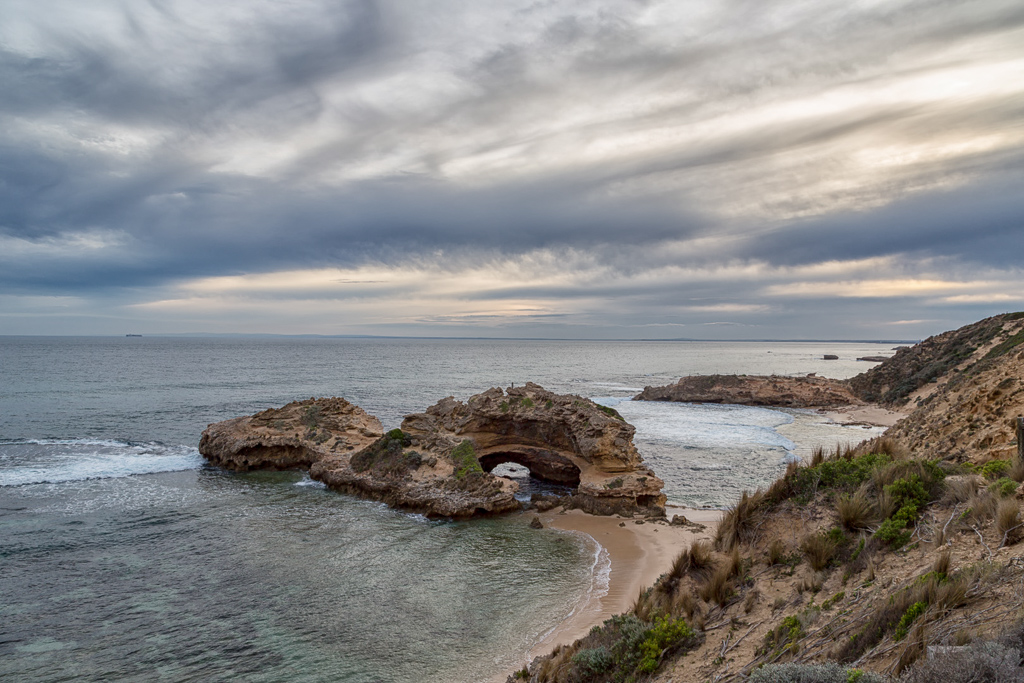 Look, I even got a ship in the photo like the painting. Light was definitely on the way out now, but it didn’t deter some fisherman on the beach nearby. 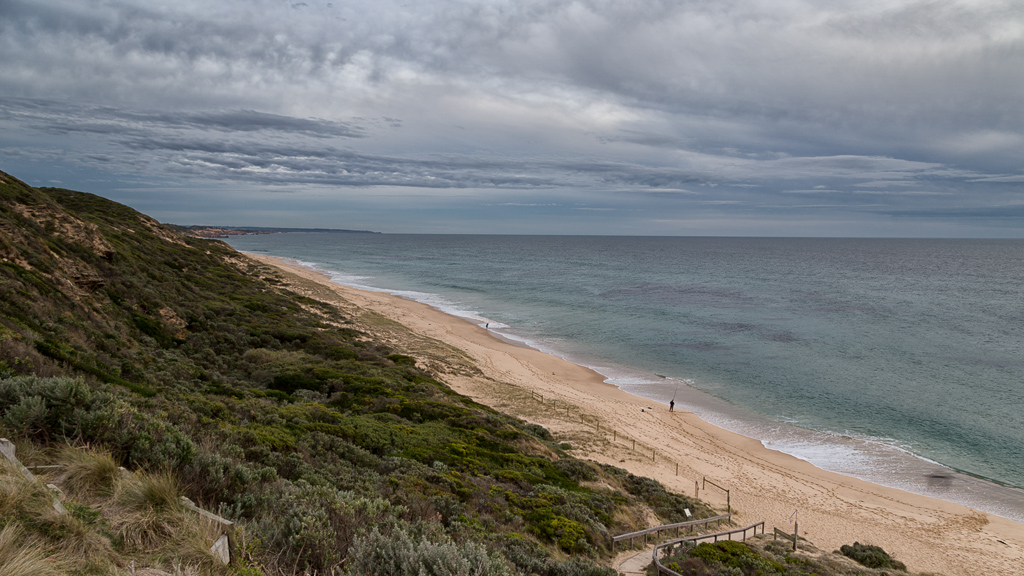 You’ll be glad to know my journeys to Point Nepean were done. It was a nice couple of days for some casual wandering and as long as you avoid the shuttle bus, there’s plenty of walking to be done, with the GPS telling me I’d walked 25 km on the two visits. I guess I should do a post involving walking in the bush next? Mm… Maybe. Finishing off, I might as well include that ship sailing by under the dark skies off London Bridge. 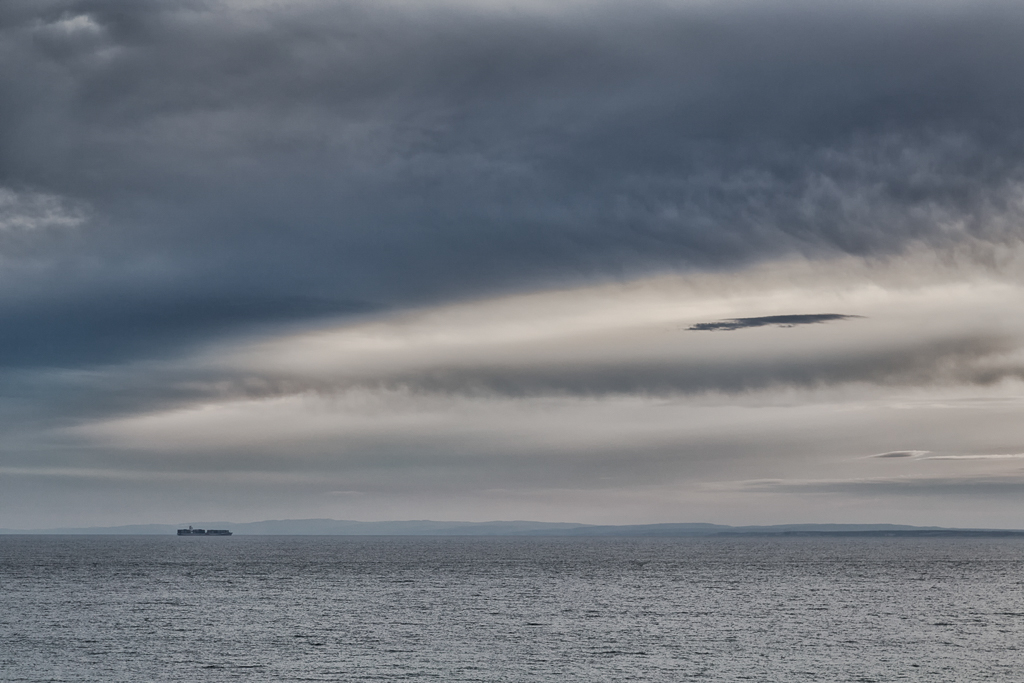