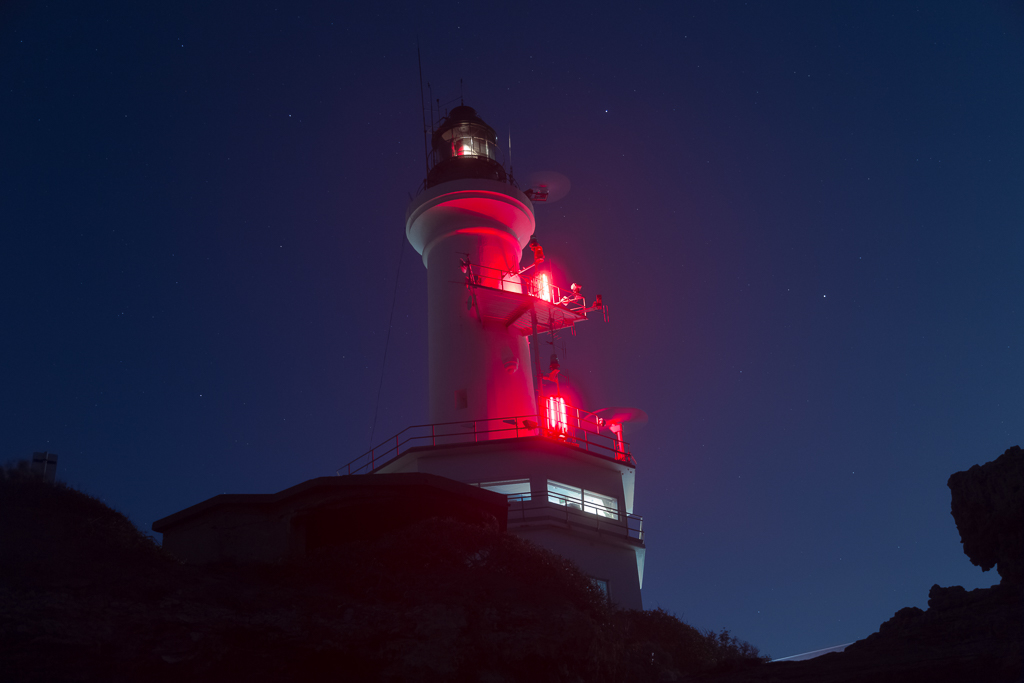 This post has been a long time coming. Do you realise it’s taken me three separate trips to capture the historic Point Lonsdale Lighthouse that was built in 1902? Talk about putting in the hard yards, which proves again blogging is not all beer and coconuts.

Also, this’ll be the last entry for a few weeks where I’m just standing around taking photos without any movement of my legs. That’s not to say it won’t happen again. Although this is predominately a hiking blog, there’s also a lot of relaxing, which is reflected in this post, considering I walked no more than 75 metres to take these photos.

Now, the Point Lonsdale Lighthouse is another place I’ve visited over the past 30 years. As a certified coastal nut, this spot has lots to offer me. Port Phillip Heads, which contains the narrow strait called ‘The Rip‘ is always entertaining, as the water churns past quickly.

That’s not all. My other soft spot is ships and there’s always plenty passing by. One day, next to the lighthouse, I’ll set up a tripod with camera and monstrous zoom lens. Then sitting back on a BYO chair, I’ll take photos whilst eating peanut butter sandwiches and brewing up hot drinks, whilst watching the ships cruise past. Have I mentioned before I went to England and back by ship? I think that’s what got me hooked. In fact the ship I returned to Australia on, the SS Australis, is now wrecked off the African coast. Instead of some humdrum retirement, it sank, which fits the theme of this blog perfectly.

Then there’s the lighthouse. I always wanted to take pictures of it at night and yet again I had a vision of how the photos would turn out. Unfortunately it didn’t go exactly to plan, but I’ll get to that in a minute. Firstly, how about some ‘then and now’ shots? I again raided the online archives of the State Library of Victoria and found the following for a comparison. 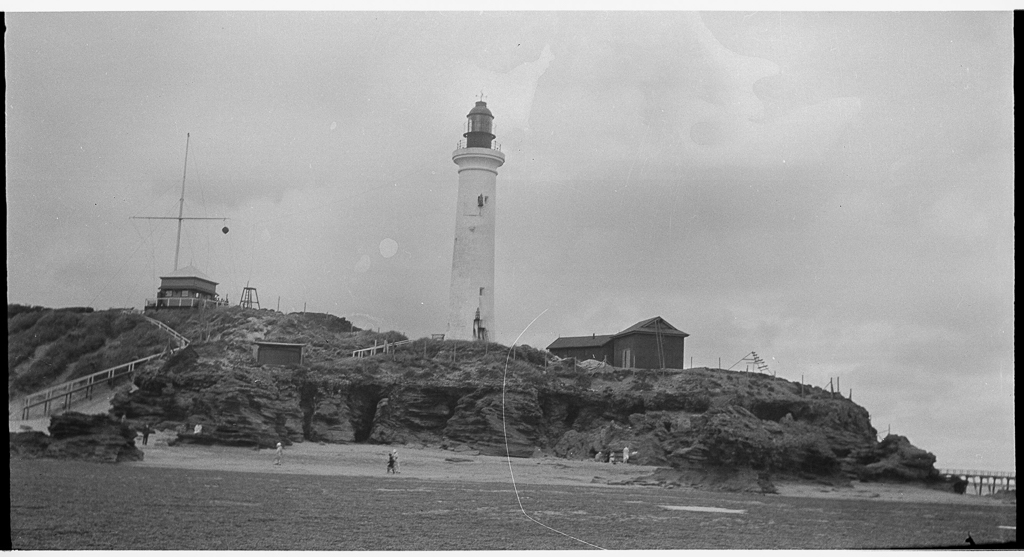 …and now here it is the other day. 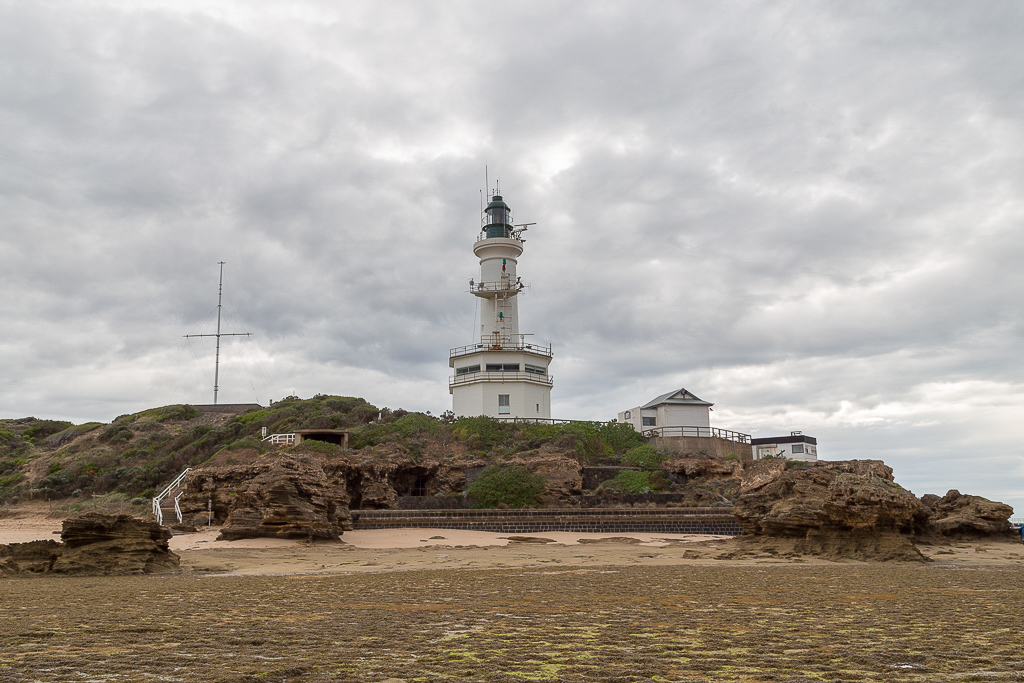 Overall, other than the current photographer being able to hold his camera straight, there hasn’t been too many changes over the years. The lighthouse now has a skirt and the odd smaller building has been altered, but that’s about it. Here’s another photo from Gerard S. Wardell… 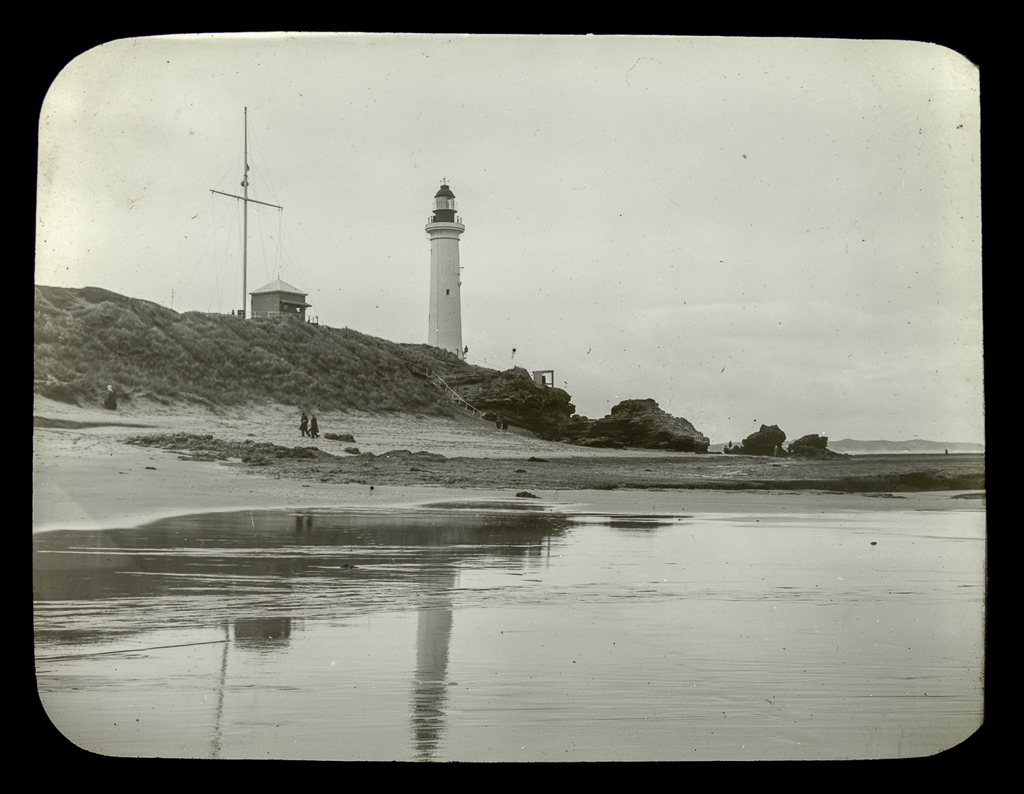 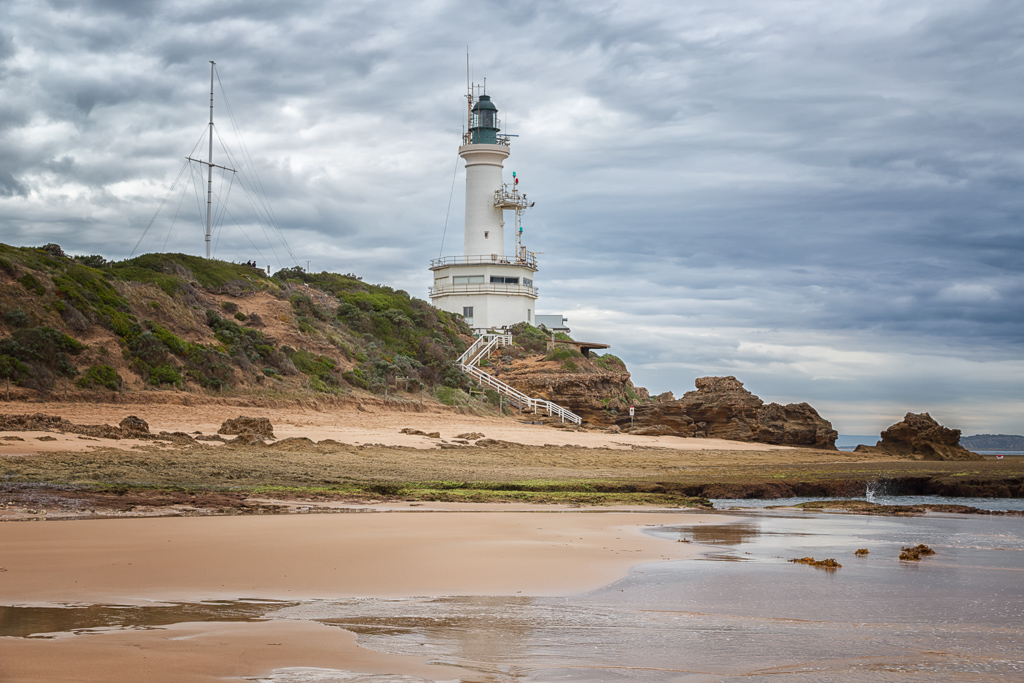 So there you have it.

I now had to pick the right day to head down with all of my photography gear in order to capture the lighthouse as the sun went down. As a camera wanker I needed certain conditions. Not too much wind (keep the tripod steady), no rain (would wet both the camera and my toupée) and hopefully a sky of interest (no wall-to-wall, white out grey cloud). Well, lucky me. I was sitting at home watching a rainy day turn sunny in the late afternoon. These were perfect conditions, so I sprinted to the car with full kit (other than the peanut sandwiches).

In no time I was there with the sun low in the sky and I’d already worked out where to set-up. There’s an old concrete observation post nearby, which was part of the World War Two defences. The best thing about a bunker is the flat roof, so I jumped a nearby fence like the world’s heaviest gazelle and climbed onto the concrete with the tripod. It’s the perfect spot and with rain clouds still swirling around out to sea I got clicking. The late afternoon sun was casting a glow across the lighthouse. 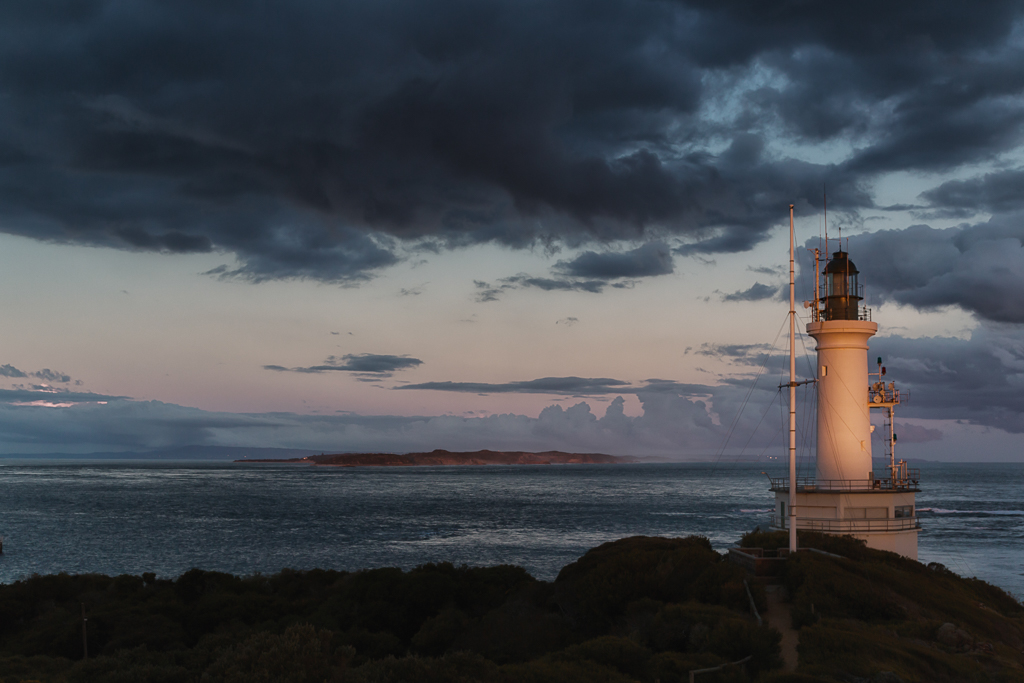 It started to become an insane shoot though, as a blazing sun was setting directly behind me. What do I take a photo of? The sunset or the building? I was on a lighthouse mission though, so I concentrated on that. Well, until a punter walking past on a nearby track yelled out to me, “Look at the sunset!!!!”

He was fired up, so I almost felt obliged to spin the camera around to get a few shots in that direction. 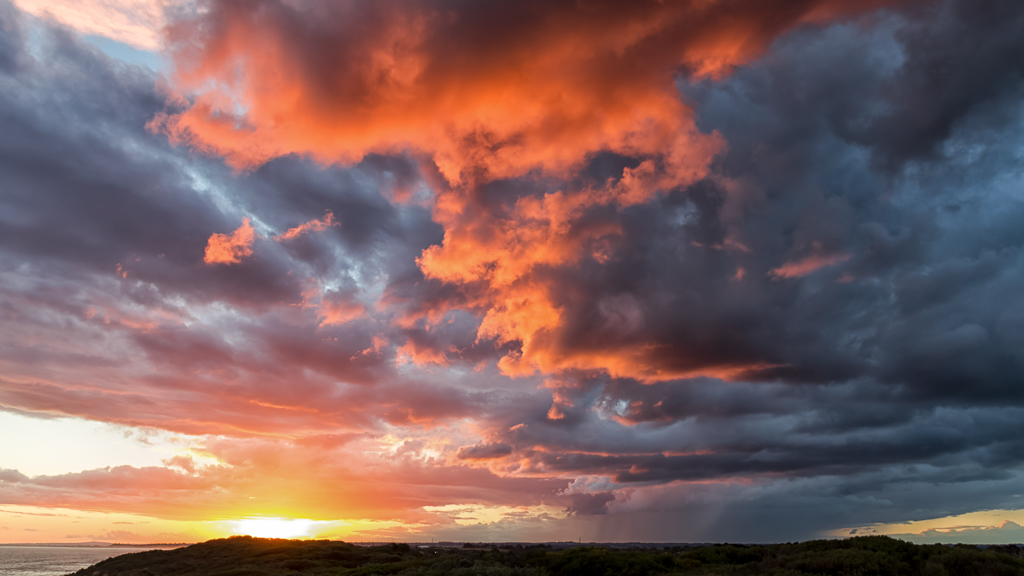 In fact it now became quite intense. One minute I was snapping the lighthouse… 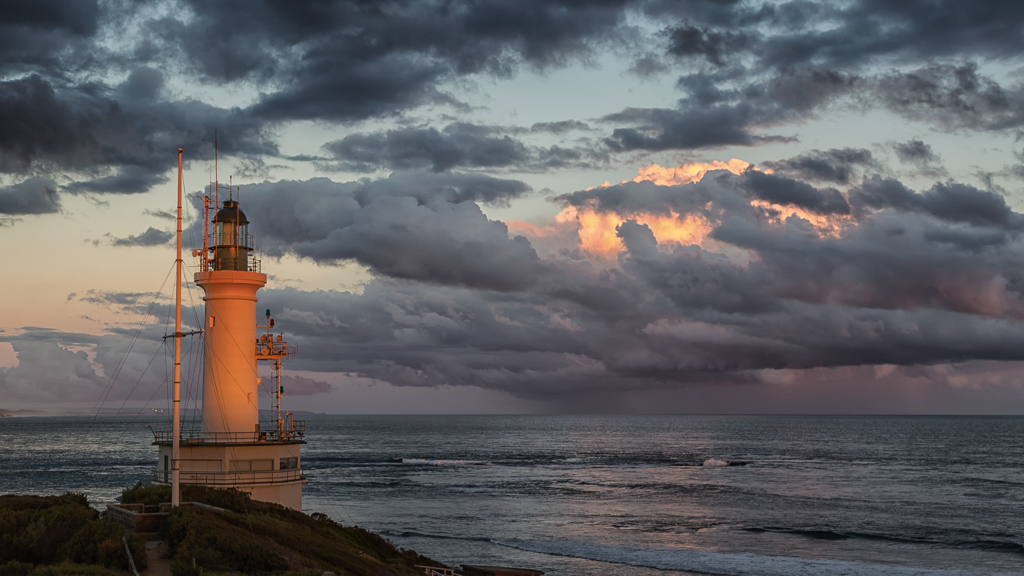 …and the next, whizzing back the other way to the sun. Talk about having a head on a swivel. 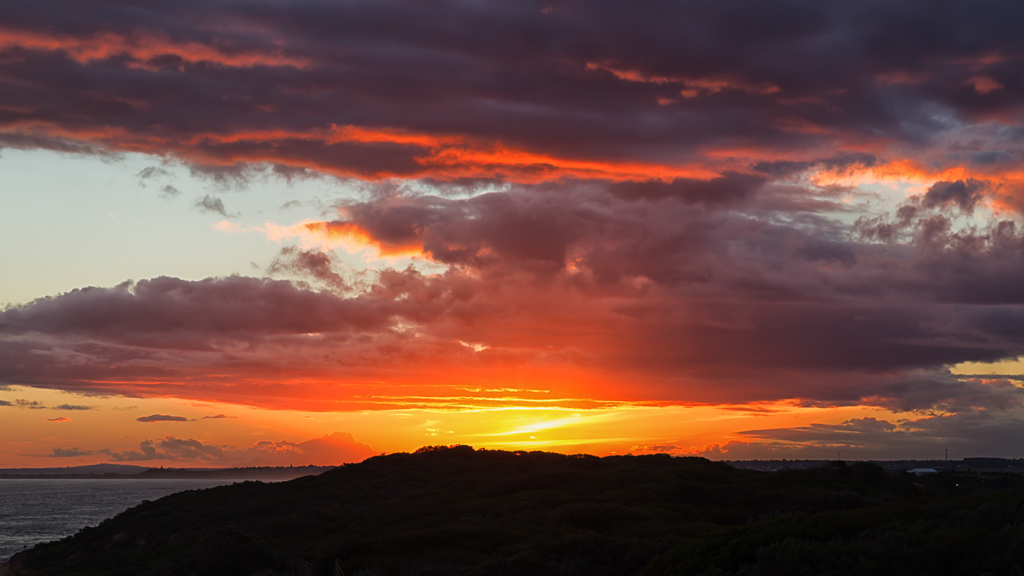 I took a million pictures in each direction until I was feeling seasick. Then as the glow faded I pulled out my party trick. Hoping to capture some cloud movement I attached a neutral density filer (ND8) on the lens. The results were interesting… 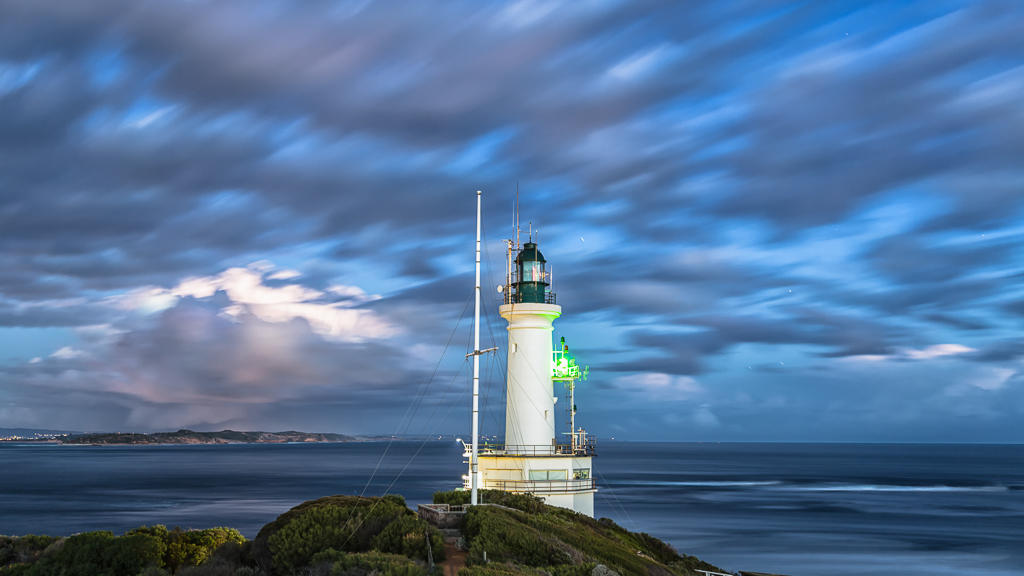 …but don’t worry, I wasn’t neglecting the fading light behind me. 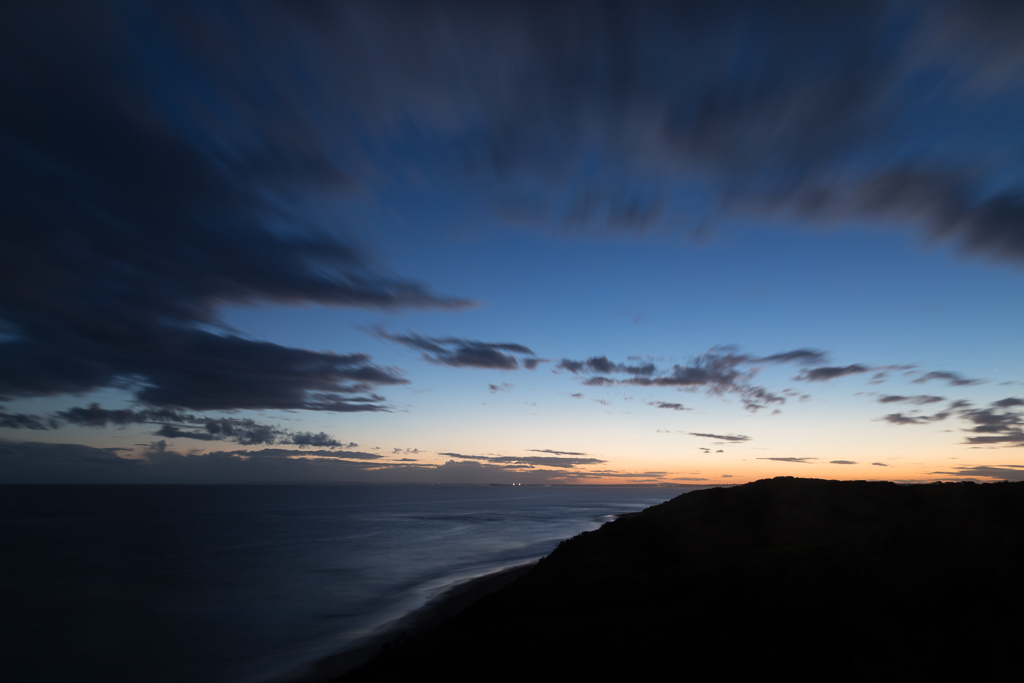 Anyway, the sun was setting and it was absolutely freezing. I’d come prepared with a full outfit of winter clothes and most importantly, a beanie. These days, the slightest cold air makes my ears ache, so at times I’ve worn the beanie all day. Including indoors. I don’t know about you, but the last sentence feels quite tragic. Once I was the world’s fittest man who just for an extra work out would jog around the streets carrying bricks and couldn’t go a week without pumping iron.

Don’t worry, it gets worse. How’s this for a story? Years ago, I was visiting Bangkok and feeling so iron-free I desperately needed a gym. Strolling around the back alleys I found one and descended a series of stairs until below street level. The lights were dodgy and I wasn’t sure what I’d find until entering a rough-as-ready room with an assortment of weights and about 20 blokes who all stopped and looked at me strangely. I guess I was the first white chump to ever enter the place?

No one spoke English and I struggled with my Thai (as in couldn’t speak a word). You know what though? Within minutes we were all pumping weights and spotting each other on the bench whilst laughing. It was an amazing moment. Different languages and cultures didn’t mean a thing, as we were all brought together by the bench press. How do you feel now? It’s an inspiring story isn’t it?! Oh… You’re feeling queasy instead…?

Right. I got a little sidetracked, but in a convoluted way I’m just informing you my ears get chilly in the night air, which indicates how far the mighty has fallen. Now, the photos. The sun was almost gone… 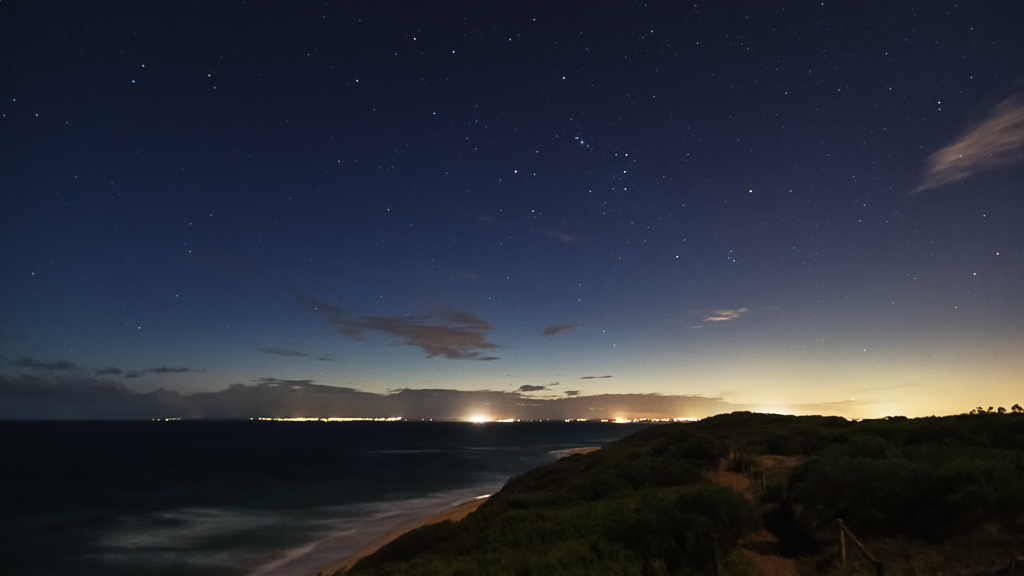 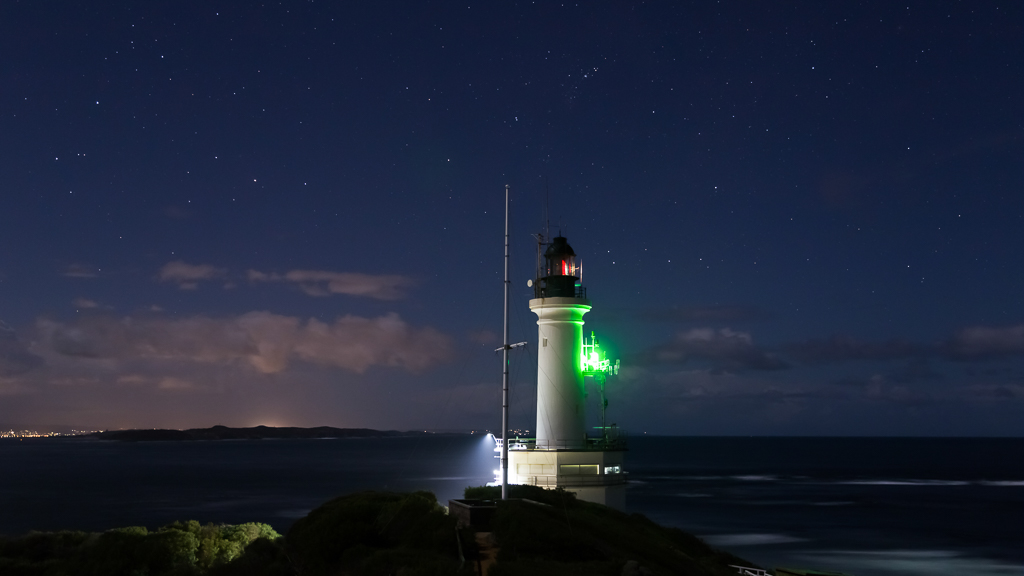 It was time to stop spinning in circles now, as the sky began to glow with urban lights on the horizon. 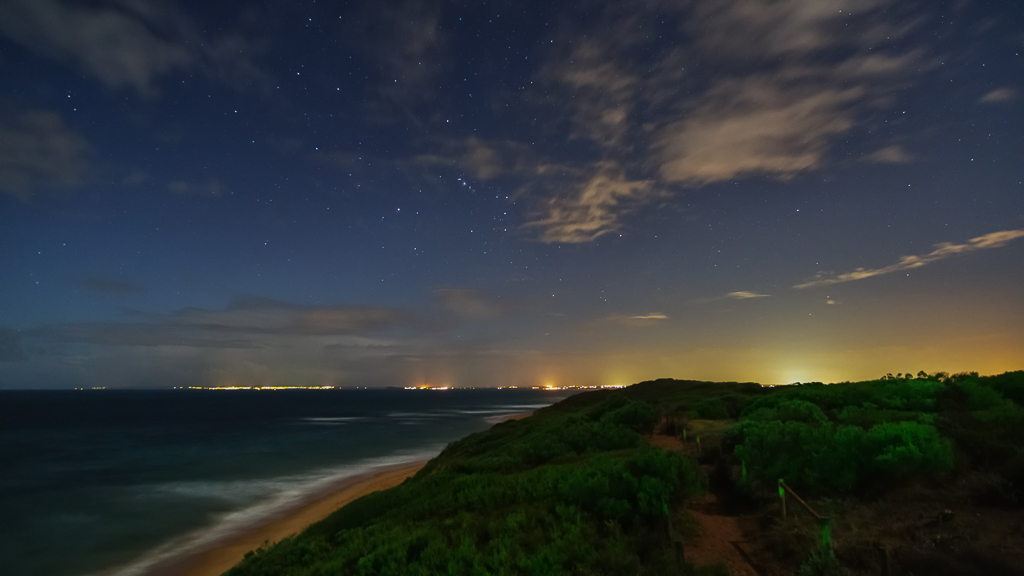 There’s one thing I didn’t factor though, which is the bright-as-crap green navigation lights on the building. Talk about a glow… 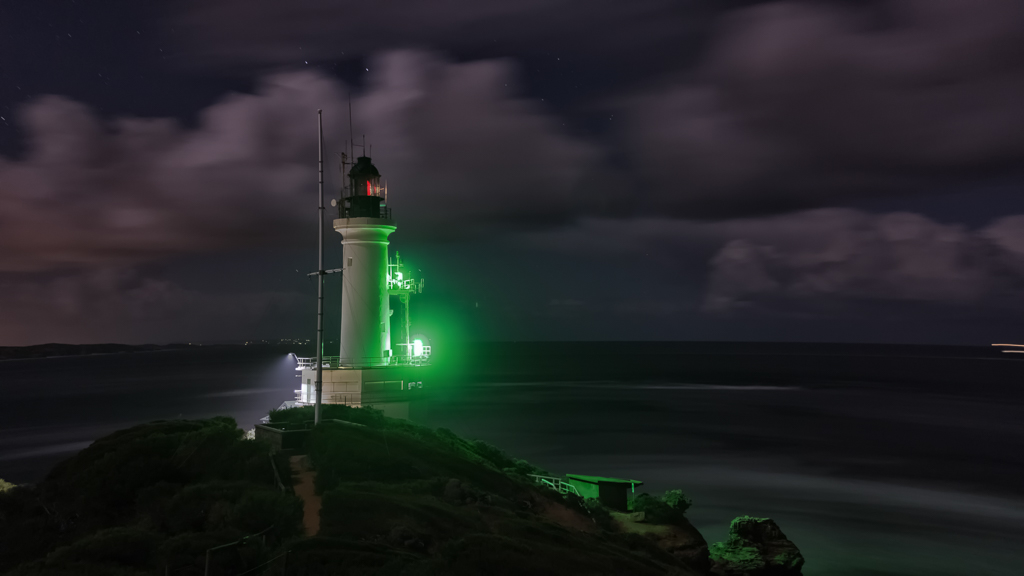 Again, I really should print some of these pictures, as the web is not doing them much justice. Anyway, there’s not much I can do right now. You’ll have to put up with them like me! I ended up finishing off when the green lights became an exposure nightmare.

Well, my friends. That’s it, but don’t think you’re going to get away with it that easy. Remember I went to this place three times.

On my next trip, I elected to set-up on the beach instead. Late afternoon was again the preferred time, as I stood in the sand replaying the entire, ‘look-at-the-sunset’!!! type of thing. It started off pretty well. 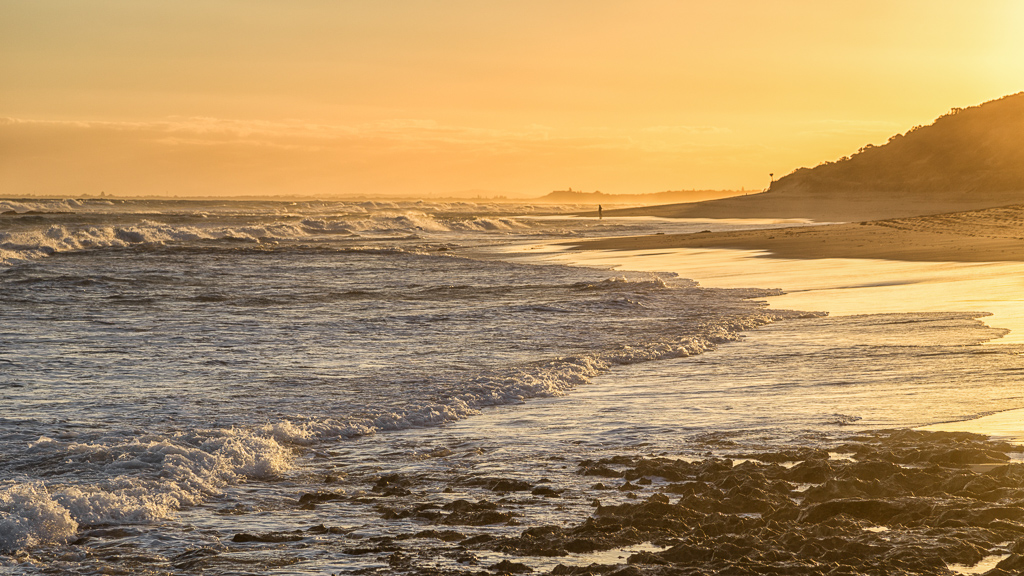 There’s the ships as well, so I was back into ‘swivel mode’. 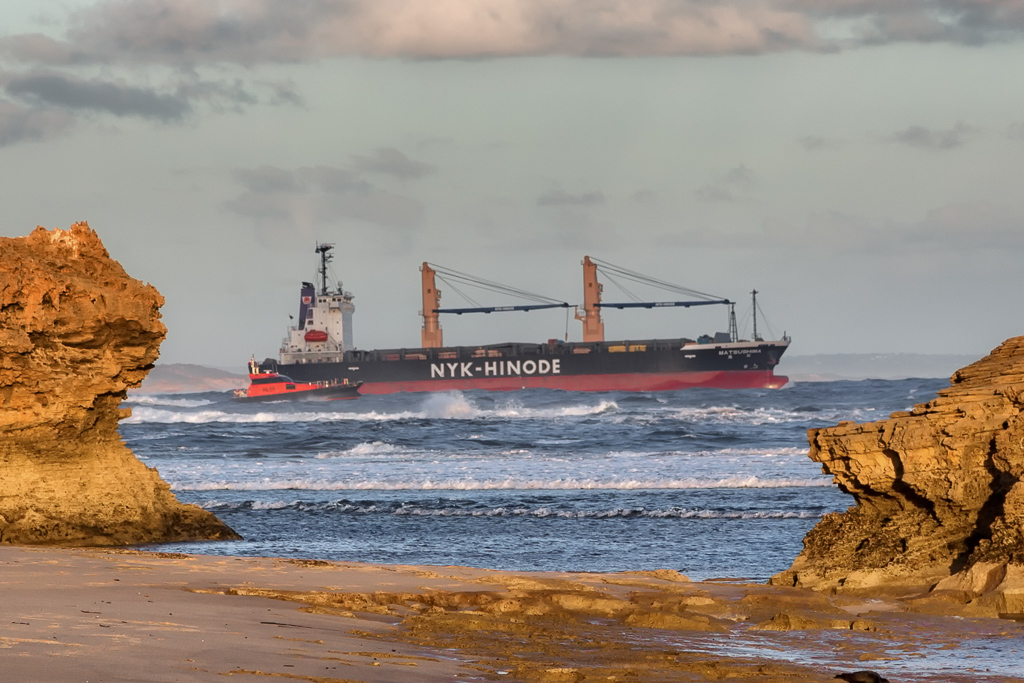 Once something works out okay, I like to use it to death. Again the ND8 filter came out… 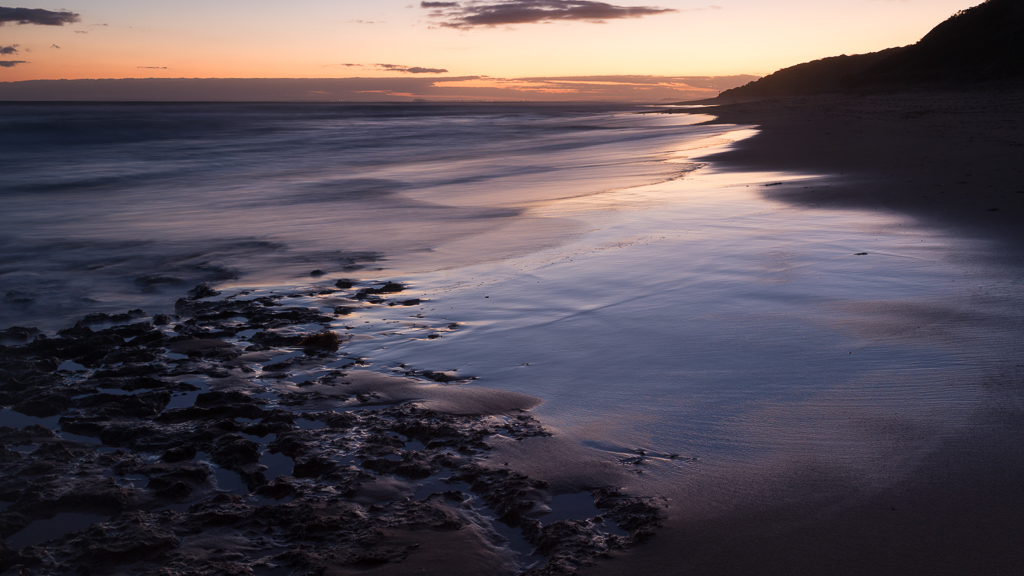 …and as it got darker I returned to the lighthouse, but instead of green, there was a red light to contend with. If only you could see the next photo, noise and artifact free… 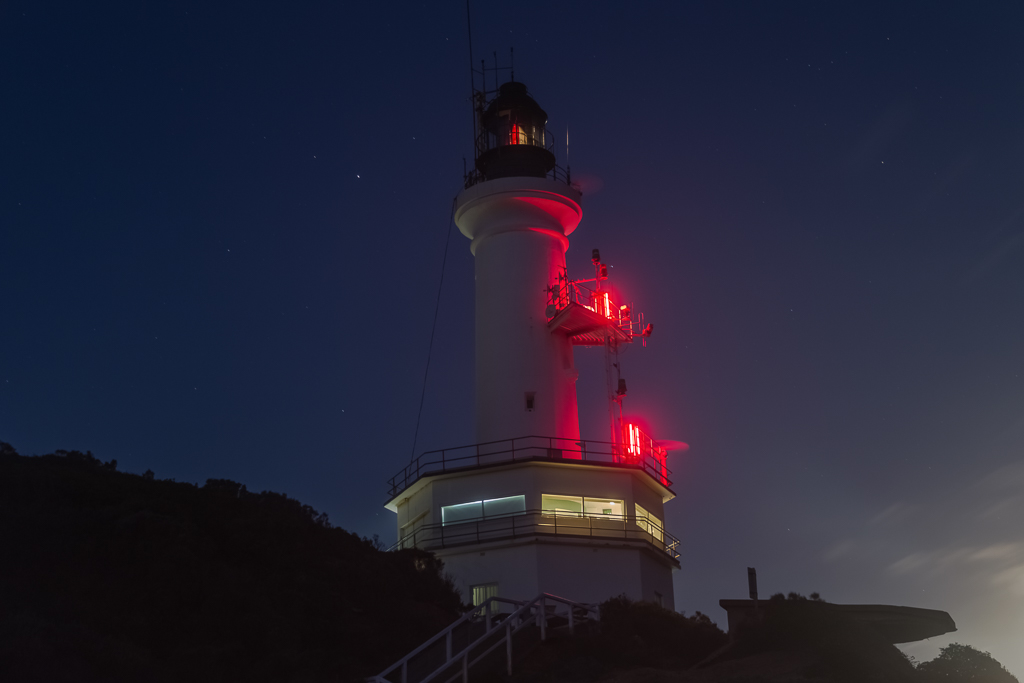 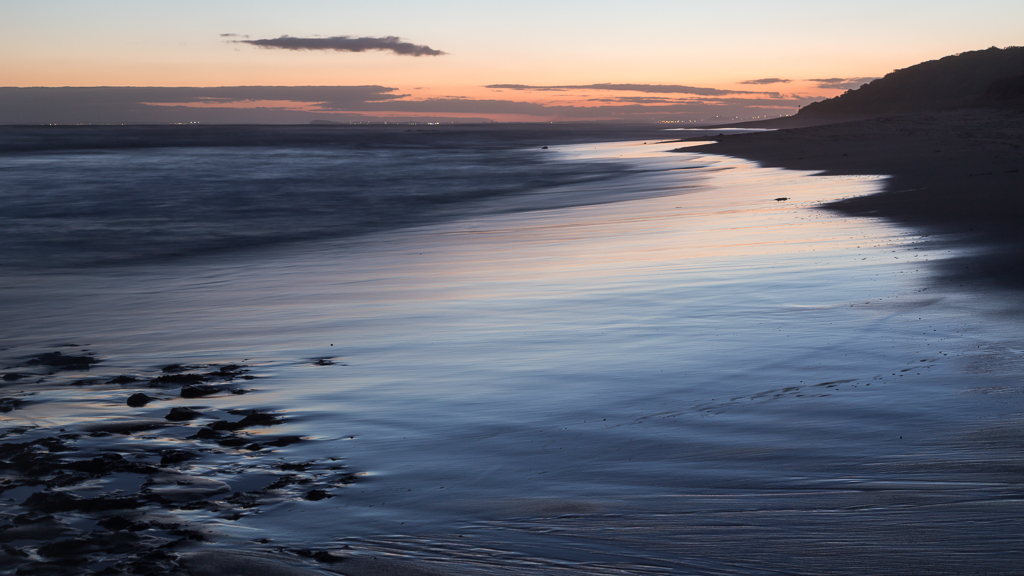 …until I gave up. If I continue, you’ll just see dozens of the same type of photo. I think I can say the Point Lonsdale Lighthouse is done?

Next up, I’ll actually go walking instead, although to an unlikely place. The historic Quarantine Station and forts of Point Nepean are in the news lately. Parts of it are up for development, so I raided the place over two trips to document and enjoy it before it potentially gets stuffed. Again it’ll be a photo bonanza and it involves a lot more walking than I’d imagined.