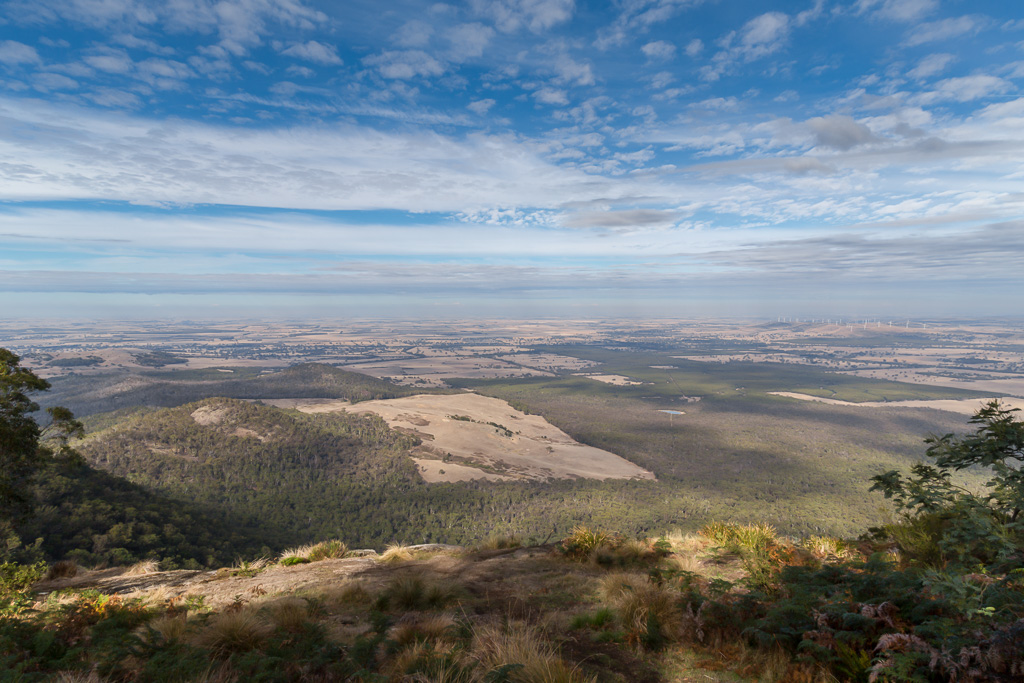 I may have gone nuts in the last post, detailing the hill climbing pain during the first day of the Beeripmo Walk through Mount Cole State Forest. Don’t worry though, as this entry will be a far more sedate affair. Does the last line disappoint? Do you want me to die on a walk one day and have the blog continued by my stunt double? Hopefully yes NOT.

The night spent in the bush at Beeripmo camp was an interesting one. During the early morning the sky cleared and I was awoken by the bright white, night-glow of the moon illuminating my tent. I lay there contemplating the Jacobian conjecture and was on the cusp of solving it, when my thought process was interrupted by something thumping through the undergrowth nearby, breaking branches as it did so. I assumed it was most likely a serial killer, so I gave up on the maths, pulled my beanie over my eyes to block out the light and went back to sleep.

I woke up (always a good start to the day) with the sun shining. As per usual I hadn’t seen any other hikers, so I was free to walk around naked and perform my daily wake up exercises of star jumps in peace. It was awkward doing that starkers though, as I nearly took my eye out with my unrestrained tackle flying through the air.

The main aim (actually, I’ll rephrase that. The only aim) for the second day of this walk is a climb to the top of Mt Buangor (987 mt). It’s only a few kilometres from camp, so I’d eaten, packed up and last of all, got dressed in quick time to hit the track, as I thought I’d get the climbing pain out of the way early.

It was easy walking though with the nice glow of morning sun on the surrounding trees. 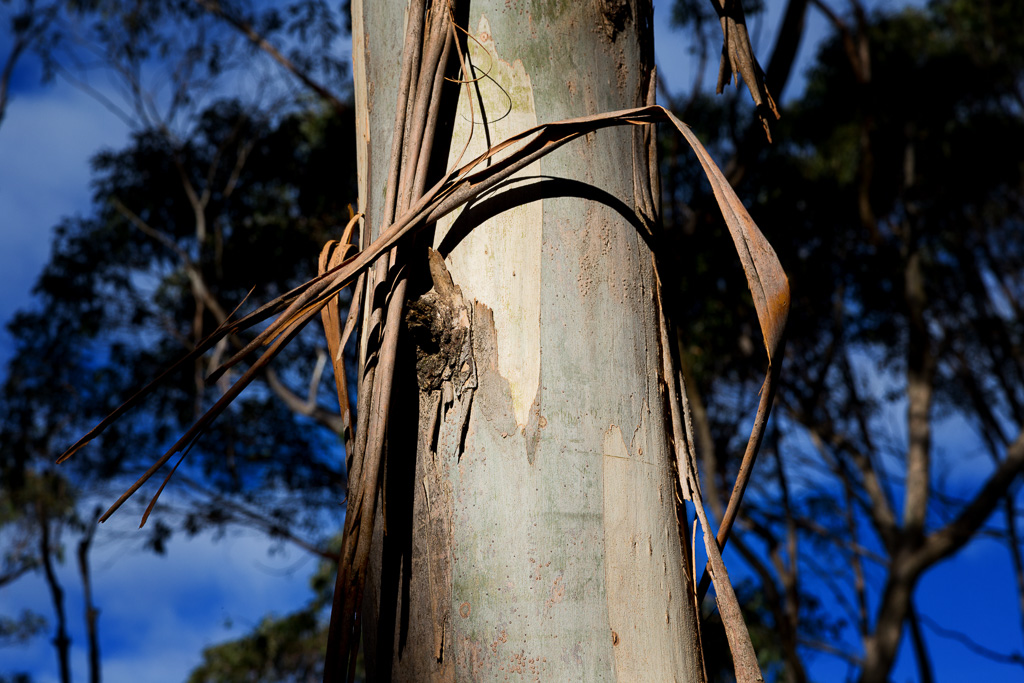 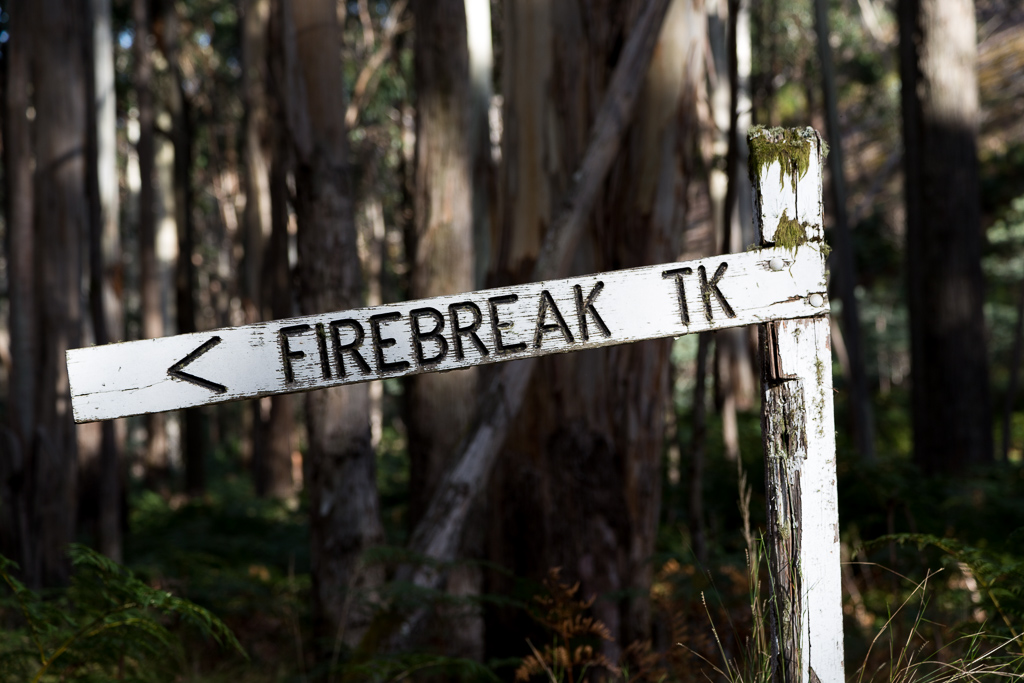 …and then entered a section with ferns over head high. 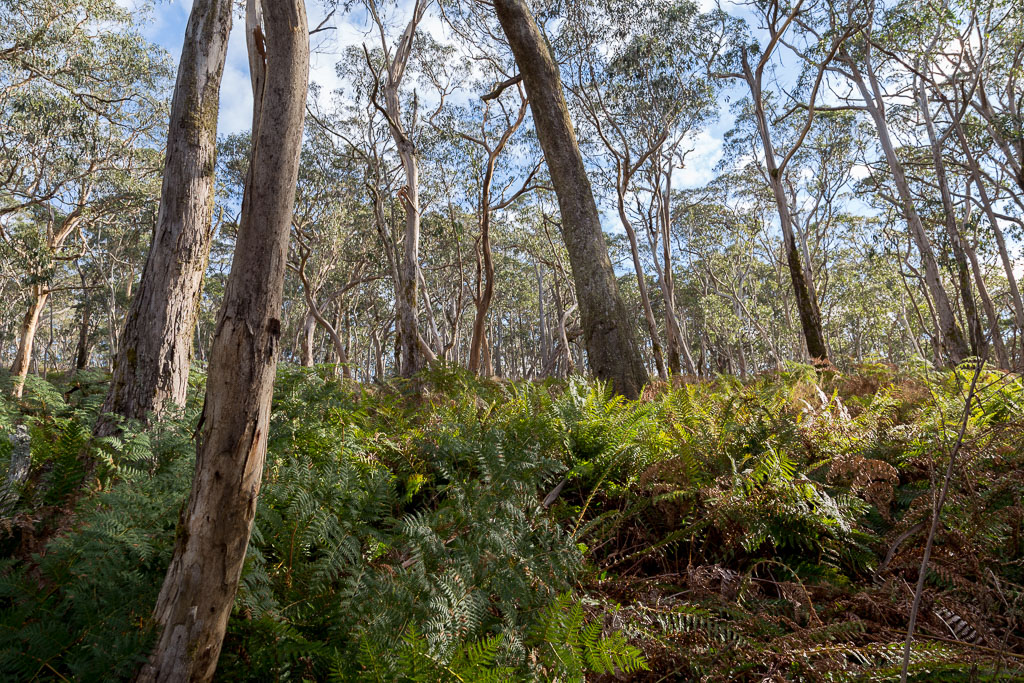 There was definitely some excitement through here. During my stomping I disturbed an animal and it took off through the bush. It had to be the loudest ‘thing’ I’d heard out walking in a long time. There were branches breaking and vegetation being disturbed, as it continued on. What surprised me is it kept going and even at some distance I could hear the sounds of the undergrowth being powered through.

I guess the most disappointing thing was I never saw what it was, but assumed it was a large kangaroo. Well, my common sense said that, but the more excitable part of my brain told me it was clearly a Yowie.

In fact, I’d already formulated my plan of action. As the Yowie leaps out onto the track thinking he’d scare me by hollering, I’d go straight into action. Attack is the best form of defence, so I’d latch onto both hairy shoulders (his, not mine), pulling him down whilst releasing a knee raise at close to the speed of sound to perform a ballistic ball crush to knock the wind out of his sails. As his peanut sized brain was registering his package had just been converted into pâté, I’d scream ‘booyah’ whilst lifting him high above my head, pause for a second and then perform a pulverising body slam whilst quickly utilising a figure-four leglock and yelling “Try and tap out now ya’ Yowie bastard!”

Damn, I wish there were some mythical creatures around out bush. They’d make hiking so much more exciting. Where was I? Oh yeah, I was fantasising hiking. The trail continued uphill and some nice views were starting to appear… 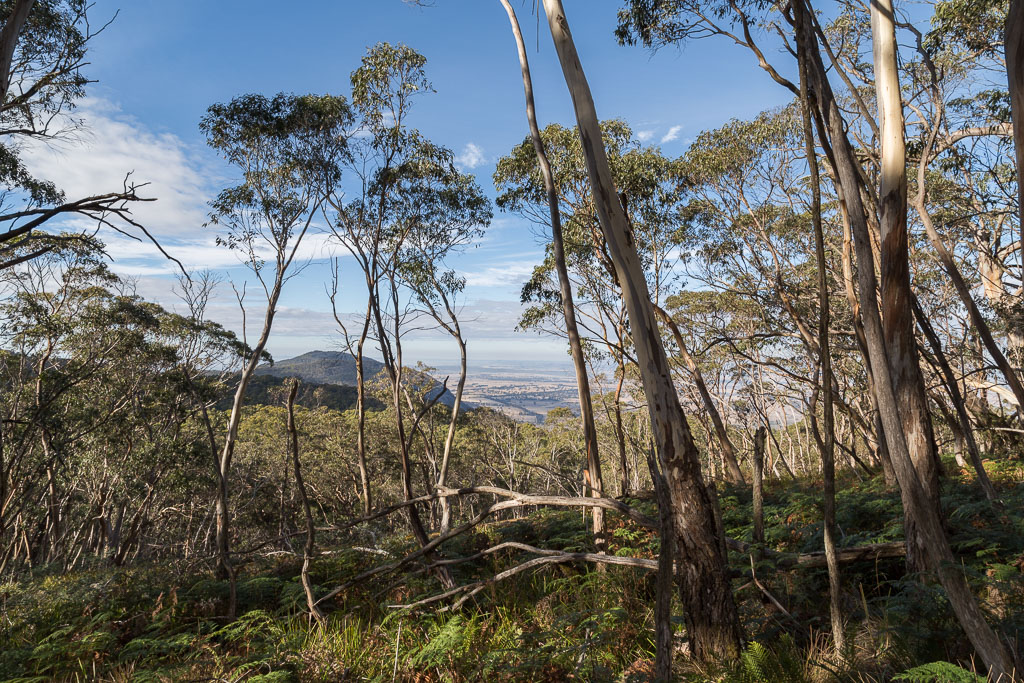 …and I reached a ‘Mount Buangor’ sign indicating the summit was two kilometres away. I elected to dump the pack at this spot and continue up weight free. Well, I dumped the pack, but I always take my wallet and car keys with me, just in case!

It was easy walking now, as I breezed up to a dirt road which continued to a dead end with a short track leading down to the official lookout spot. It’s not a bad view either… 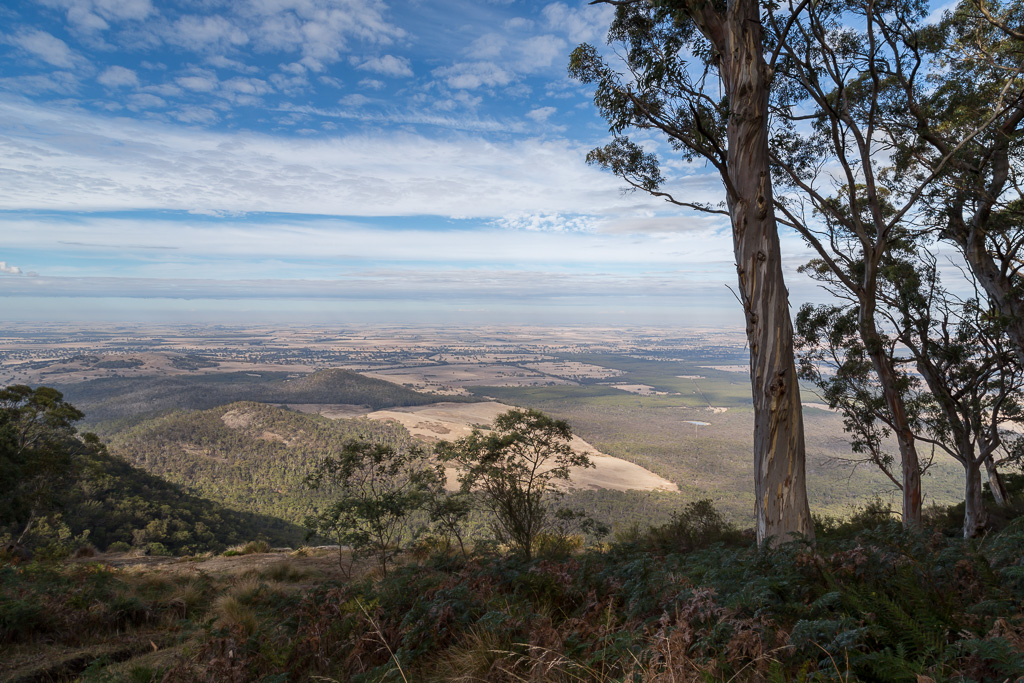 …and it was a perfect day to sit down and enjoy the sights. This isn’t the actual peak of Mount Buangor though. I realised this when sitting at the lookout and noticed the mountain continued to climb up beside me. 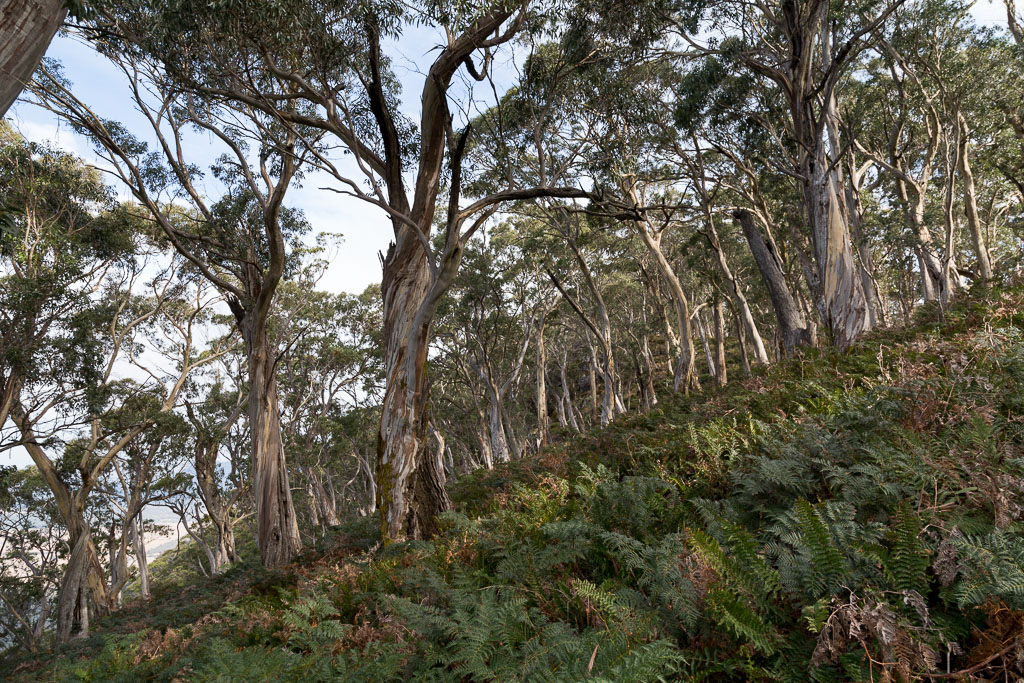 Well this isn’t acceptable. I hadn’t moaned and sweated to not actually reach the peak, so I abandoned the nice views and continued uphill. I followed an old vehicle track… 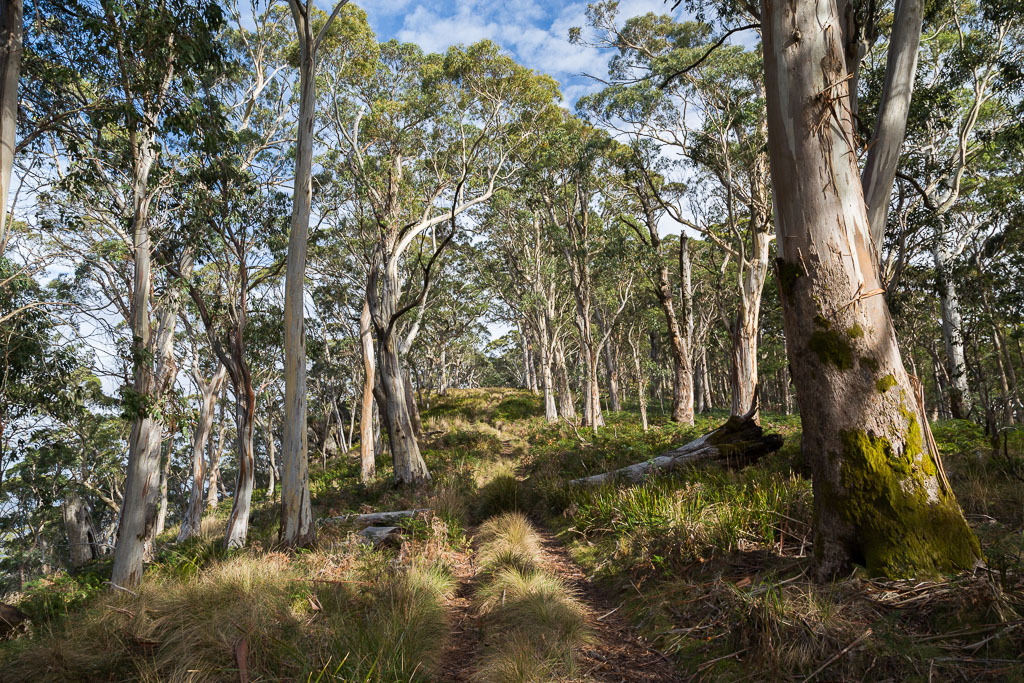 …until it came to an end. The climbing continued though, but it was comfortable off-track walking now, as I passed between large boulders and then spotted the well-worn summit cairn. 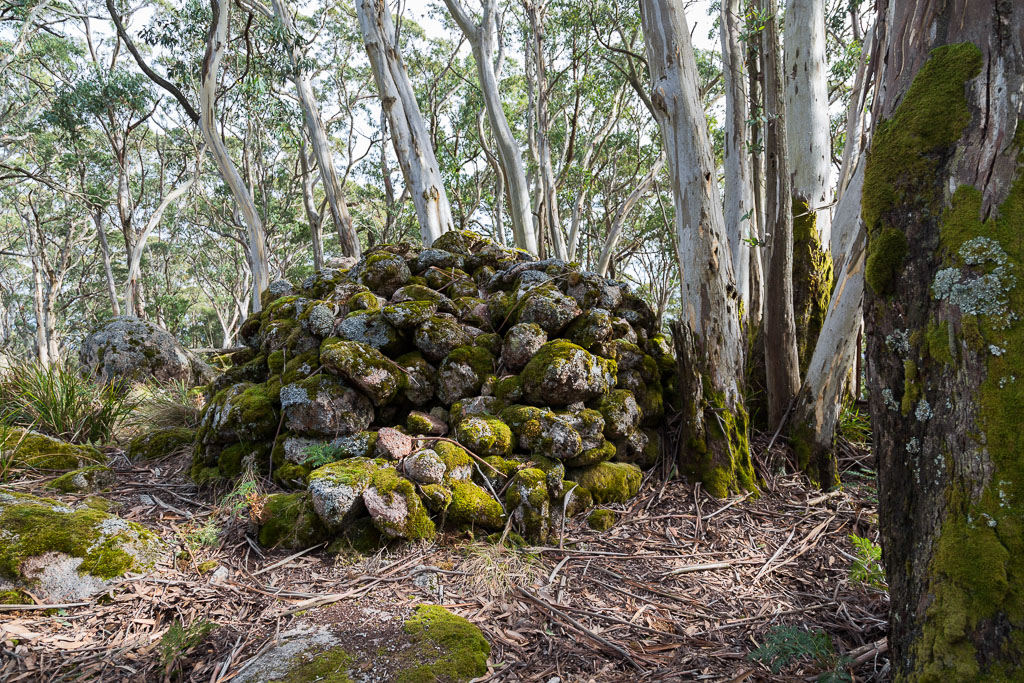 The summit seemed undisturbed, so I assume most people go to the lookout and then head back down? I’m not sure, but I potted around and noticed an old wooden structure nearby. My track notes describe the structure as, “…a rough shelter…”.

Now, when I read that I assumed there would be something one could actually enter, but I think John may have accidently slipped some ‘wacky-baccy’ in his hookah when he wrote this up as a ‘shelter’. Well, maybe I’m wrong, as I guess it would suit a professional limbo practising gnome? 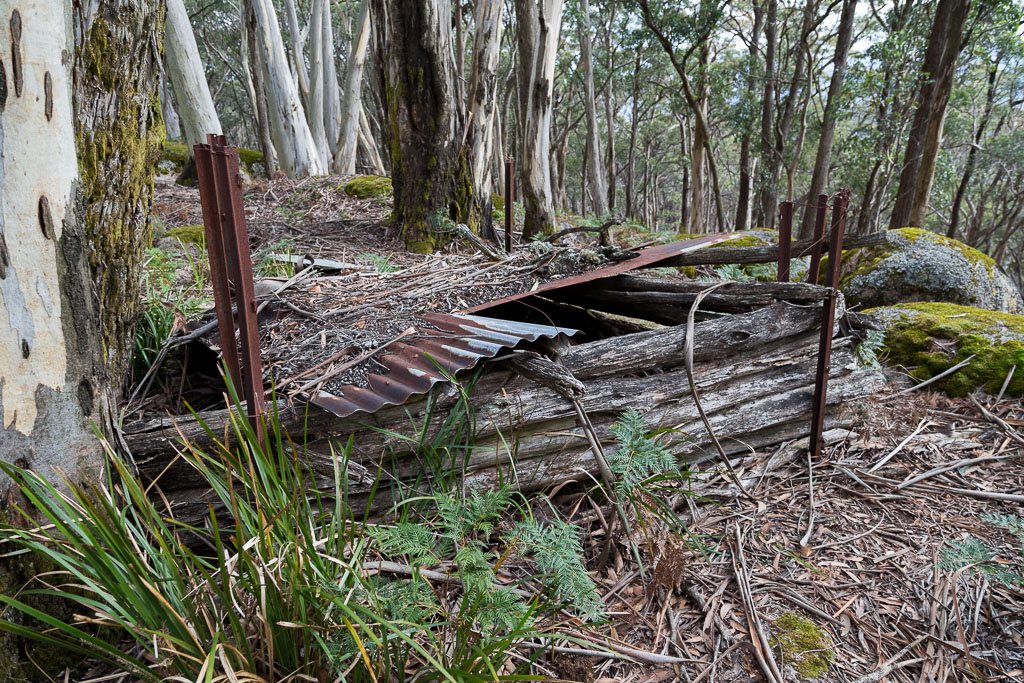 I think a shelter should be more than a foot in height? Then again, what do I know? At least it gave me a chance to admire some rusty barbed wire screaming out for a tetanus injection. 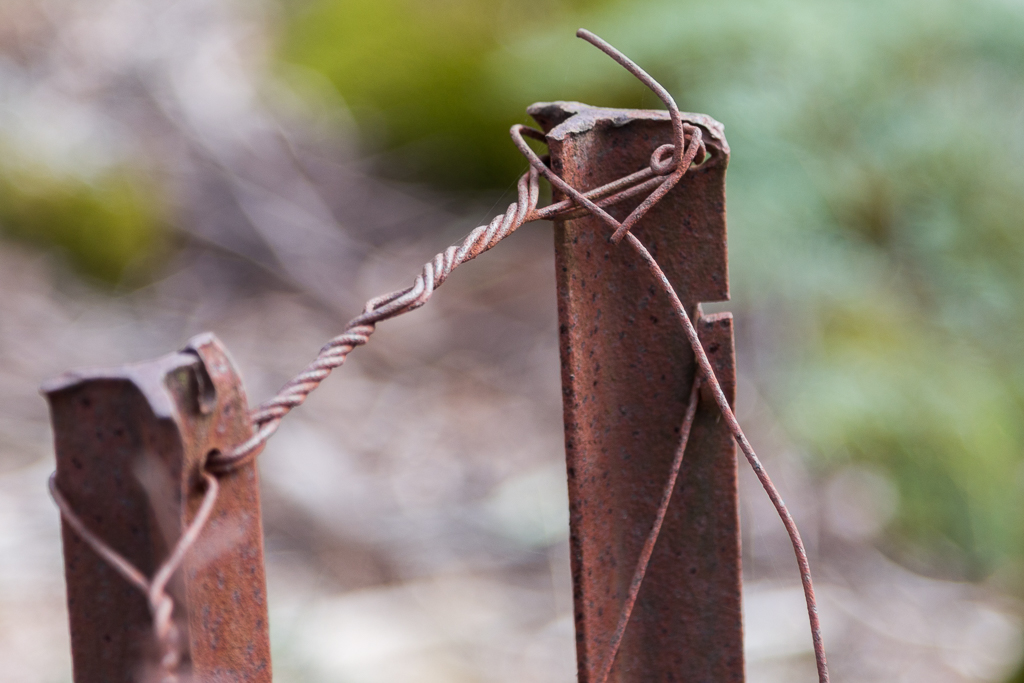 There’s a reason for the summit lookout not being at the top, as the top doesn’t actually have any views. Surrounded by trees and having spent enough time admiring the moss covered cairn, I headed back down and made my way back to my pack.

You know what? There’s barely anything to report from here. I kitted up and passed Mugwamp Camp and followed a ferny track downhill. Actually, from the camp it’s downhill all the way back to the car. I was flying along with the odd stop to take a photo. This fern looked nice against the tree… 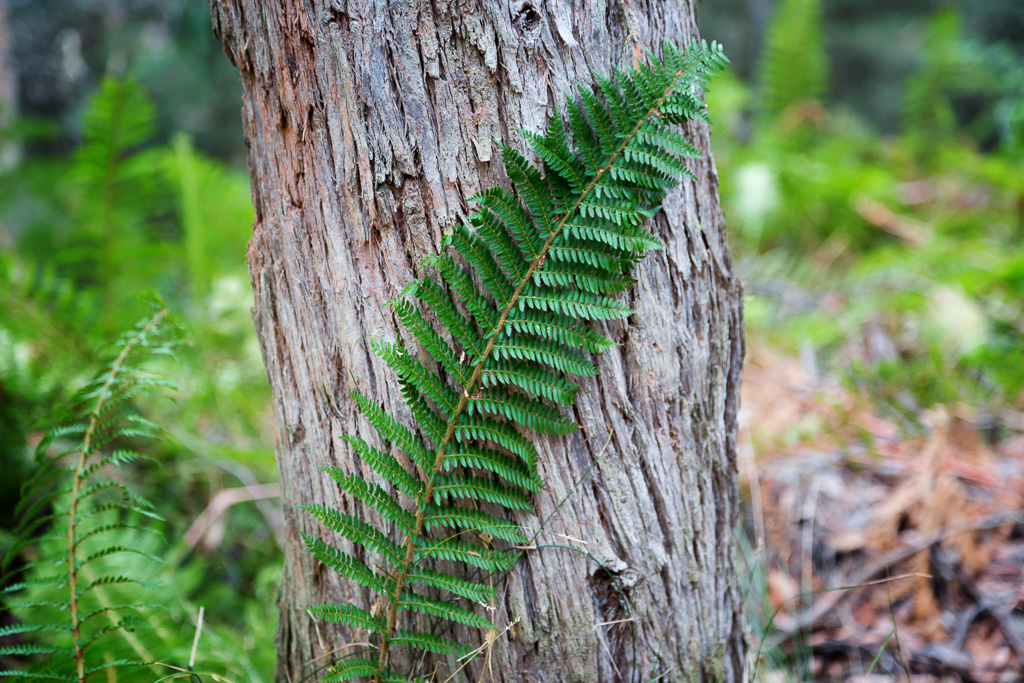 …and sap oozed out of this ironbark eucalyptus. 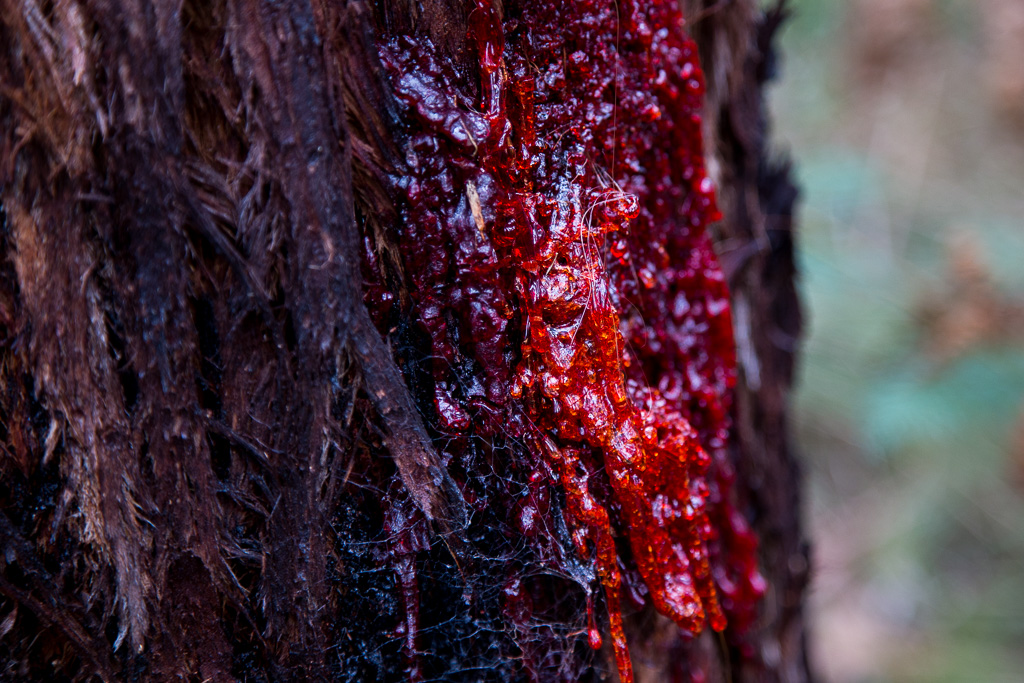 Another tree had grown up between a large boulder. 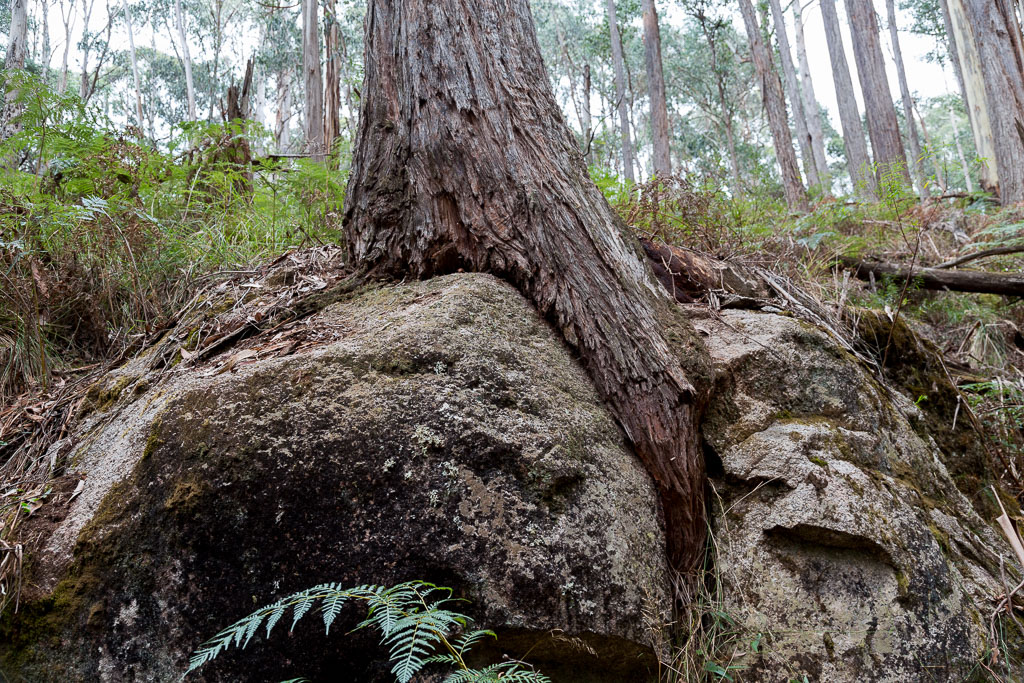 The descent on Long Gully Track was notable for how steep the hillside is next to the path. I made sure not to slip along here… 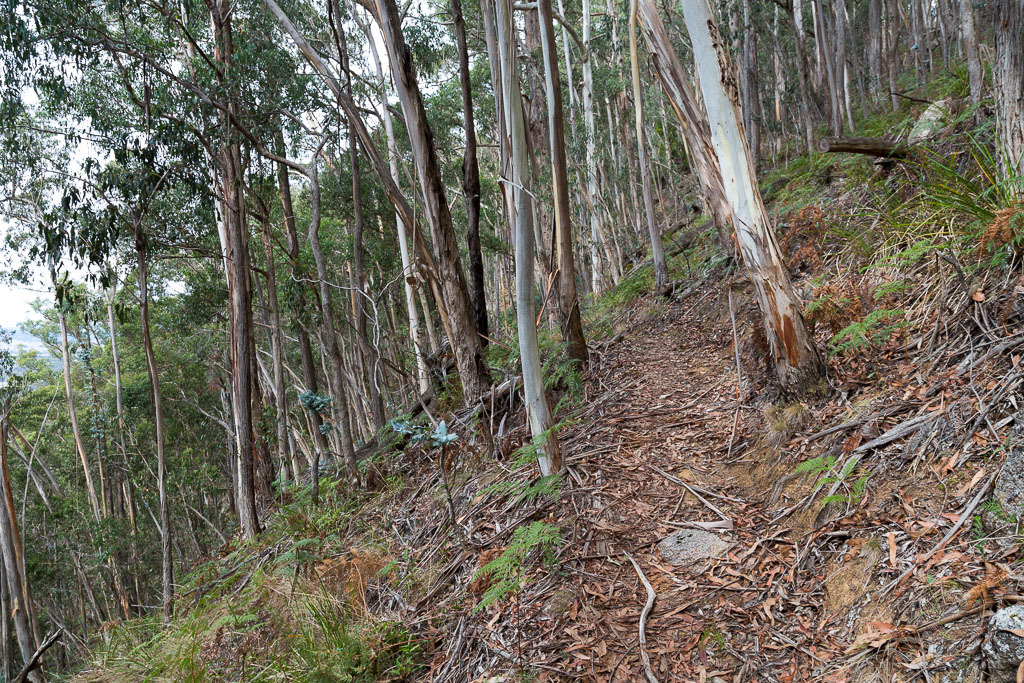 …until reaching a sign telling me the Richards camp where my car was parked was only 700 metres away. Huh? What happened? I’d flown through the second day of walking and before I knew it was throwing my pack into the car boot. I must say though, I timed my downhill sprint perfectly. Just as I was packing up rain began to fall and continued to get heavier. See? Not everything in here is a fiasco. I didn’t even get wet!

So, that’s it. The Beeripmo Walk was finally done.

Talk about a difference in two days. The second was a breeze to climb up Mount Buangor without the pack and the first, well, that was horrific. It’s a nice walk though and although it’s touted as a ‘beginners introduction to overnight backpacking’, I’m not so sure. Do you want to torture someone on their first overnighter? I guess though, it depends on how much you like them…?