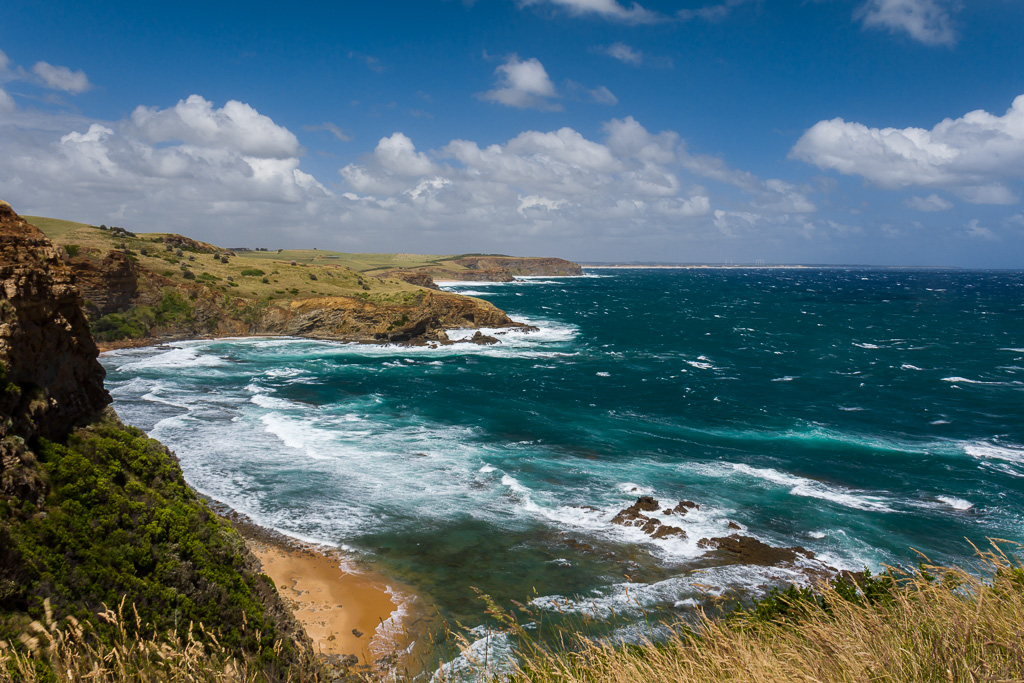 Well, summer has certainly arrived, but there’s still plenty of variable weather down here in Melbourne. My last walking post featured a hellishly hot Werribee Gorge, but guess what? Only a week ago, I walked the George Bass Coastal Walk near Phillip Island and it was cold, as heavy showers constantly swept along the coast.

Now, this walk has featured in the blog before. Ben and I visited in winter last year, but we didn’t complete the entire thing. The walk isn’t a circuit, as it runs along the cliff tops between San Remo and Kilcunda, so we were doing an ‘out and back’ job. On the previous attempt we did most of it before turning back due to heavy colds we had coming on.

Actually, we felt like crap and the day ended perfectly when I slipped on some wet rocks and body slammed myself. It was my last real ‘bell ringing’ fall and hopefully there aren’t too many more in the future. I don’t mind a tumble, but that one on the rocks was ridiculous.

On this occasion the weather forecast was average, but what sent me down to the coast was the wind speed forecast. Nothing beats the wind ripping off the ocean for a bit of drama and I’d much rather be there on a lousy day than one where it’s totally benign.

Beforehand I checked the Bureau of Meteorology website and it gave me a good indication of the conditions, as they’d issued a ‘toupée alert’, which was to be aware of any rogue rugs being ripped off scalps. You definitely don’t want one of them landing in your salad whilst dining outdoors. So, I was headed for the coast.

Before getting there though, I must mention the ongoing ‘toilet roll fiasco’ which is a leftover from the last post. Remember the huge pile I’d accumulated outside? Well, it took me a decade to bring them into the house, but now they’re stacked up and ready for action. Mind you, it’s starting to look like a prepping room now, as my backpacks are in there with them, so when the apocalypse hits I’m ready. I’ve even got a guard protecting my supplies for the new world. 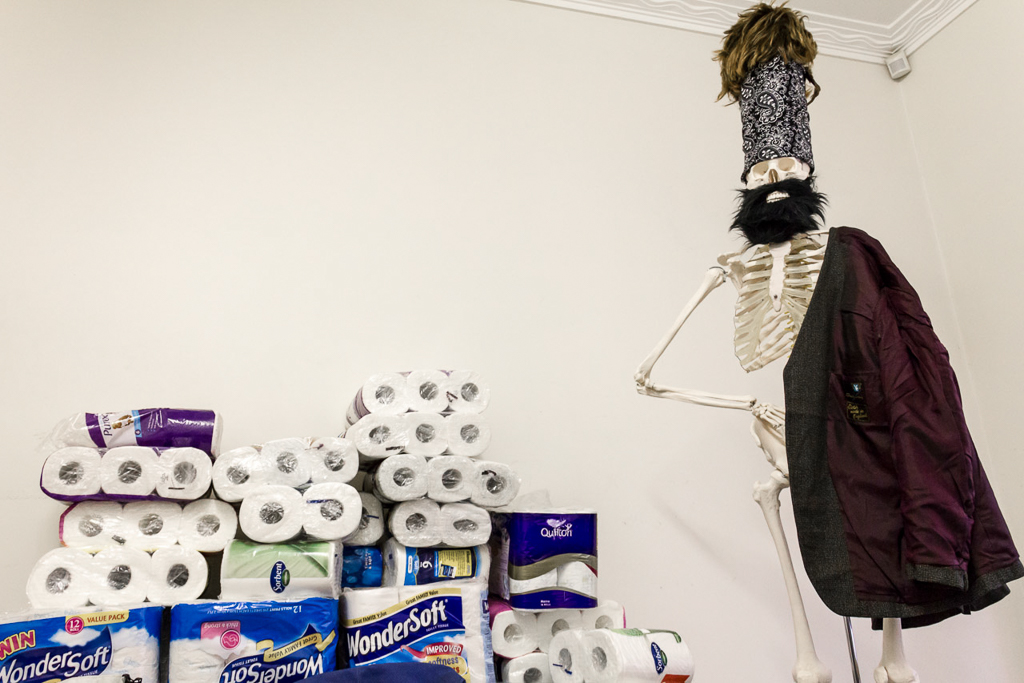 The supplies are secure

So there you go. I think you’ll find that was my last joke of this post. I’ve just woken up from an unintended nap on the couch and whilst snoozing I’m positive someone broke in and stole the humour from my brain. Before sleep I was really interesting and firing on all cylinders, but upon awaking I’m officially sans jokes, so once I finish writing this up I’m heading down to the police station to report the theft.

Being humourless has its advantages, as I don’t have to write much to get this entry over the line, so I’ll let the pictures do the talking of this walk.

I arrived at the Punch Bowl car park to find it empty. This is standard fare for me, as it’s pretty rare to see anyone on any of the walks I do! I headed off onto the path which follows the cliff tops and noted pretty quickly that it was windy. Not just windy, but really really breezy and it was coming straight off the ocean. That wasn’t all though, as there was a particularly nasty looking cloud of rain also looming and headed my way. 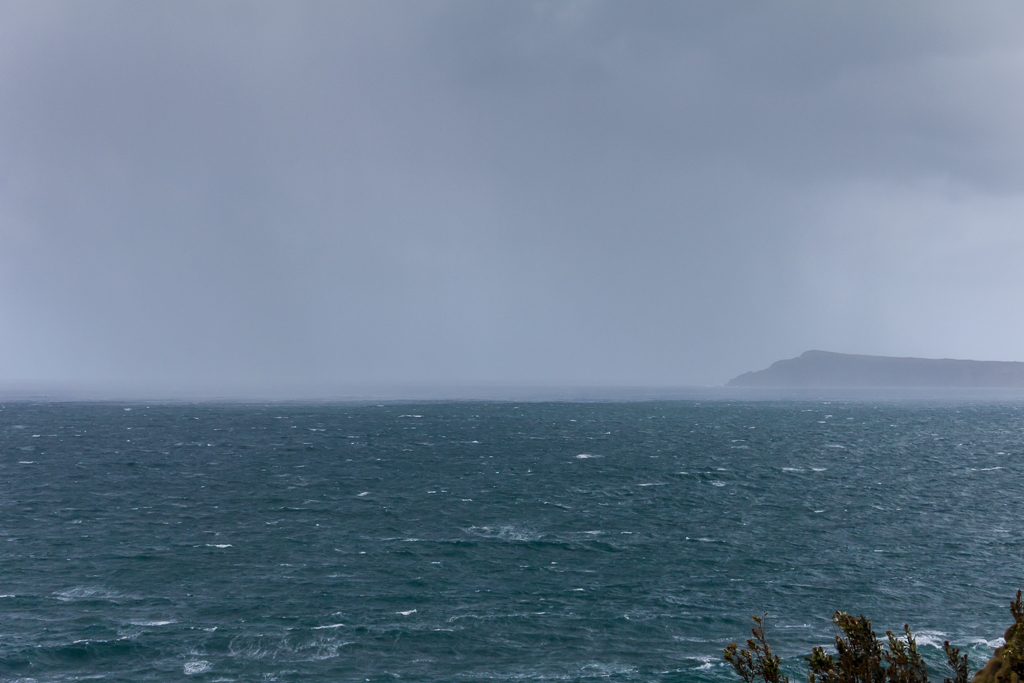 Mm… That doesn’t look good. As the entire walk is quite open, I didn’t really have anywhere to hide. In the end I decided to don the rain coat and hunker down in the long grass whilst the rain blasted by. It wasn’t too bad, as although heavy, it didn’t last long due the wind pushing it quickly inland. I’d just reached Half Moon Bay as the rain passed and unlike the previous visit here, I couldn’t continue on the beach as the tide was quite high. 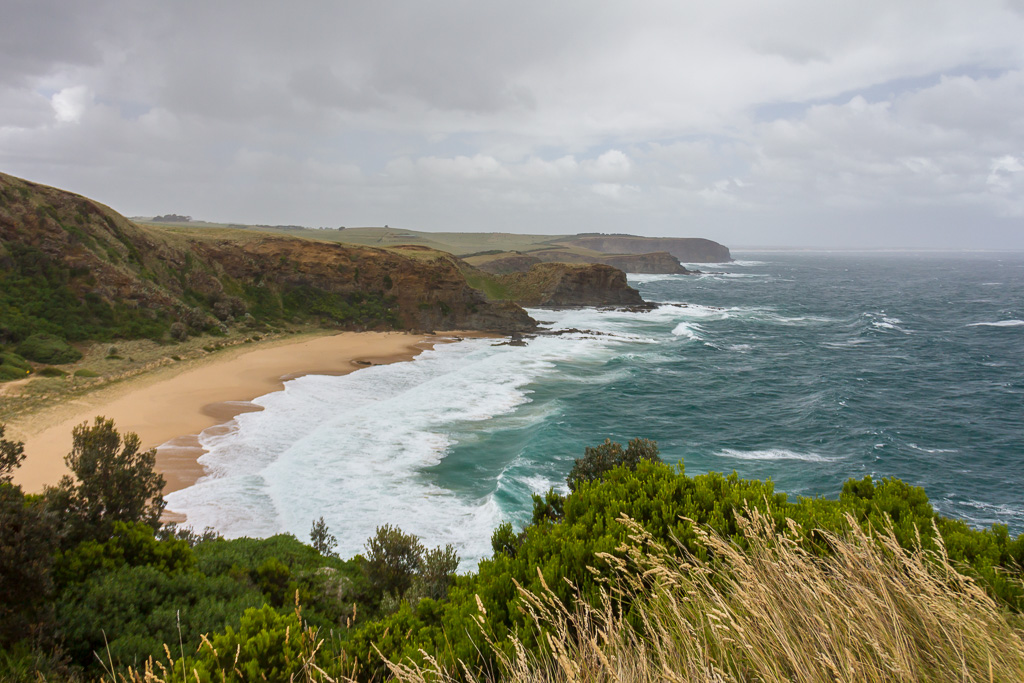 These sort of conditions are pretty good though, as the quick moving rain and sudden sunshine made for some nice light for photo opportunities. I continued along now in the sun, as I followed the windswept grassy path. 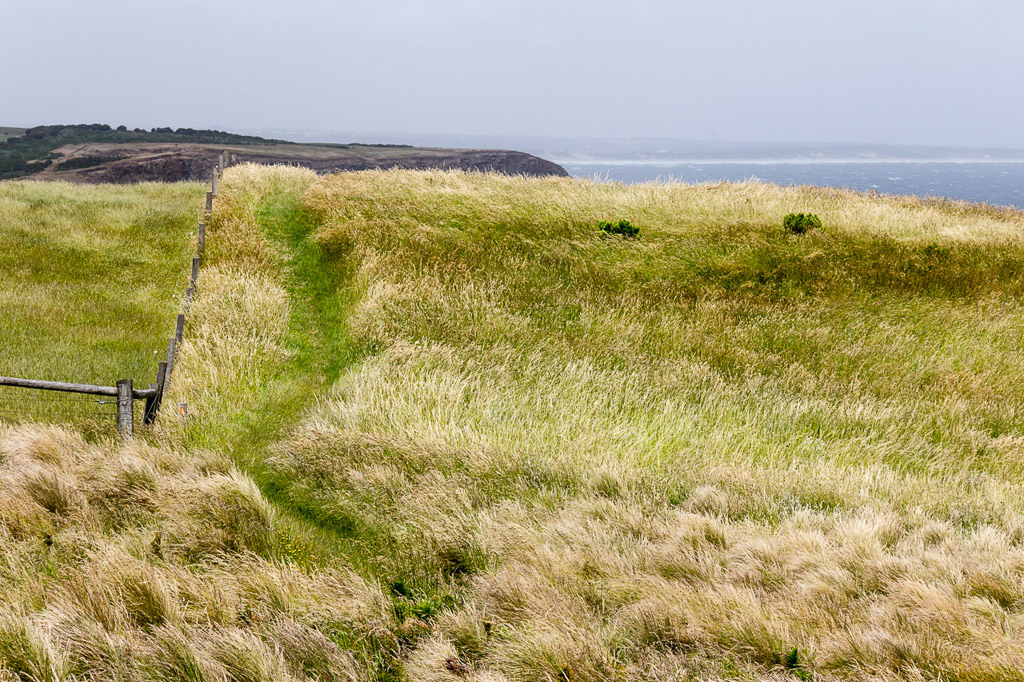 The track undulates continually and as each crest is reached the coastline ahead was again revealed. 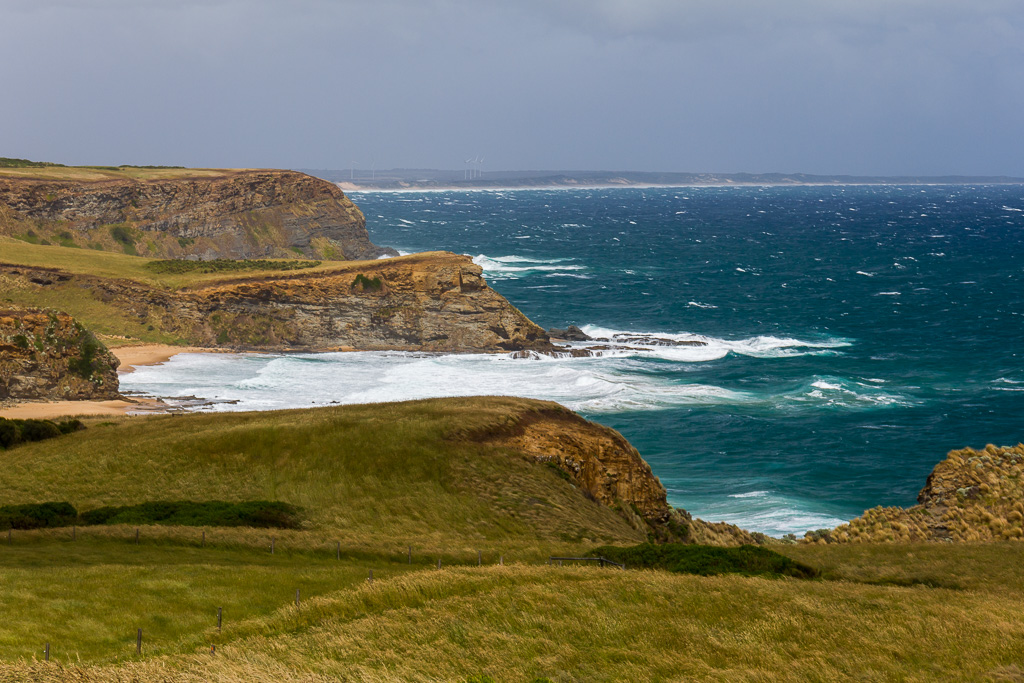 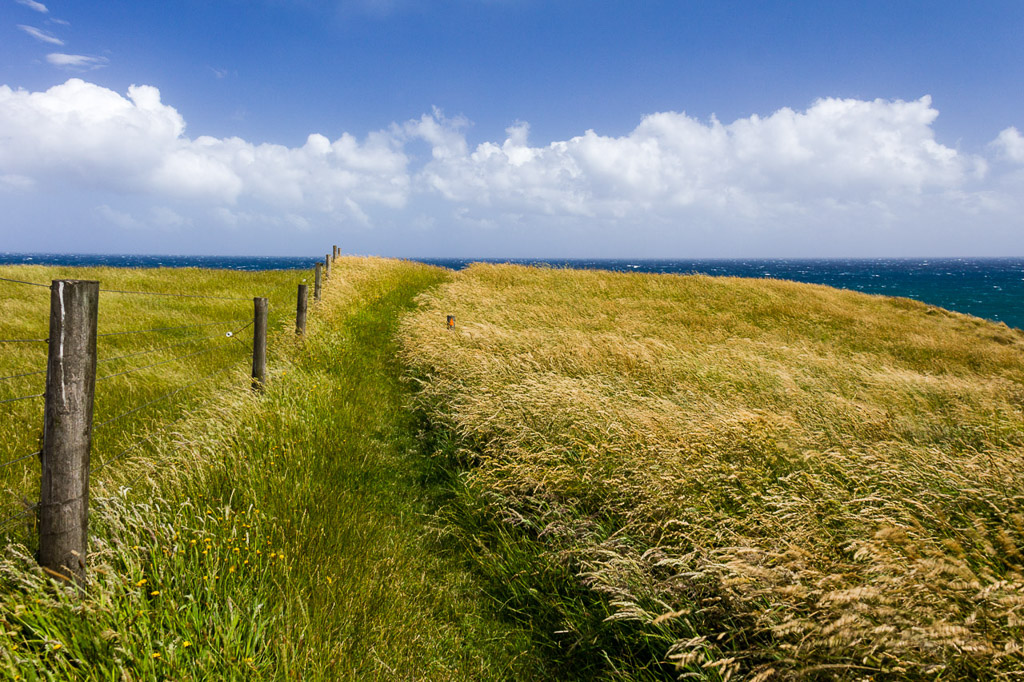 …before the track descended down to the beach… 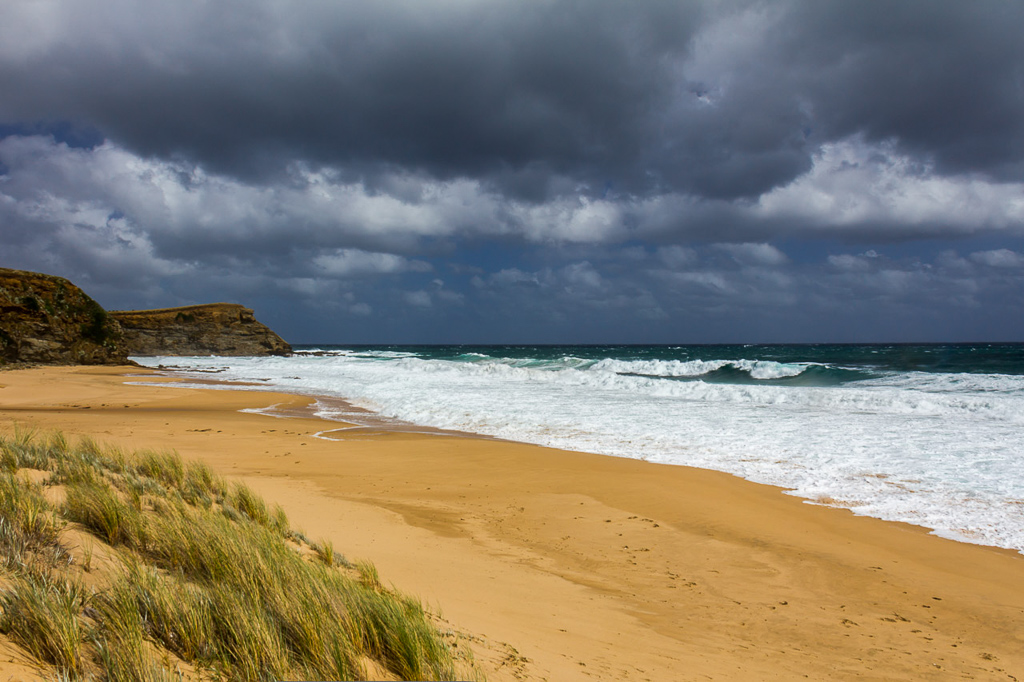 …where I had to negotiate an inlet called ‘Sandy Waterhole’. The breaking waves left the beach covered in white foam and for a moment I thought I might get damp feet. 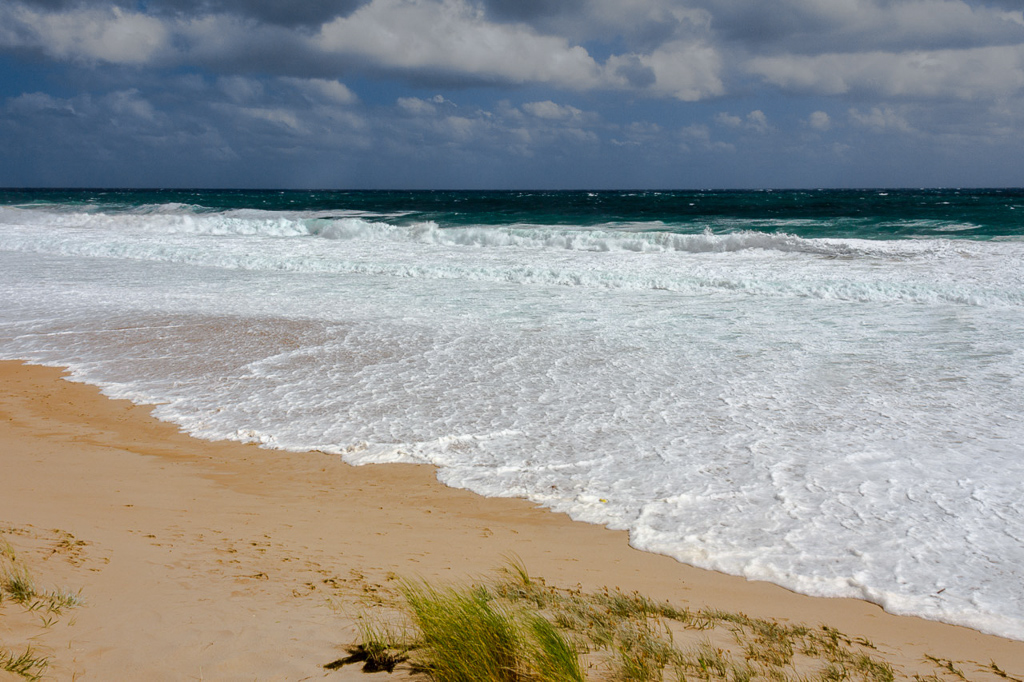 Once on the sand the most uncomfortable part of the walk began. The strong wind was continually whipping up clouds of sand and I was glad I’d brought my heavy duty raincoat. Its hood was vital along here as I needed it to stop my face being sand blasted off. We couldn’t have that could we? I’d be both without humour and face at the same time which I think is a fairly disappointing combination.

Anyway, the waves were thumping… 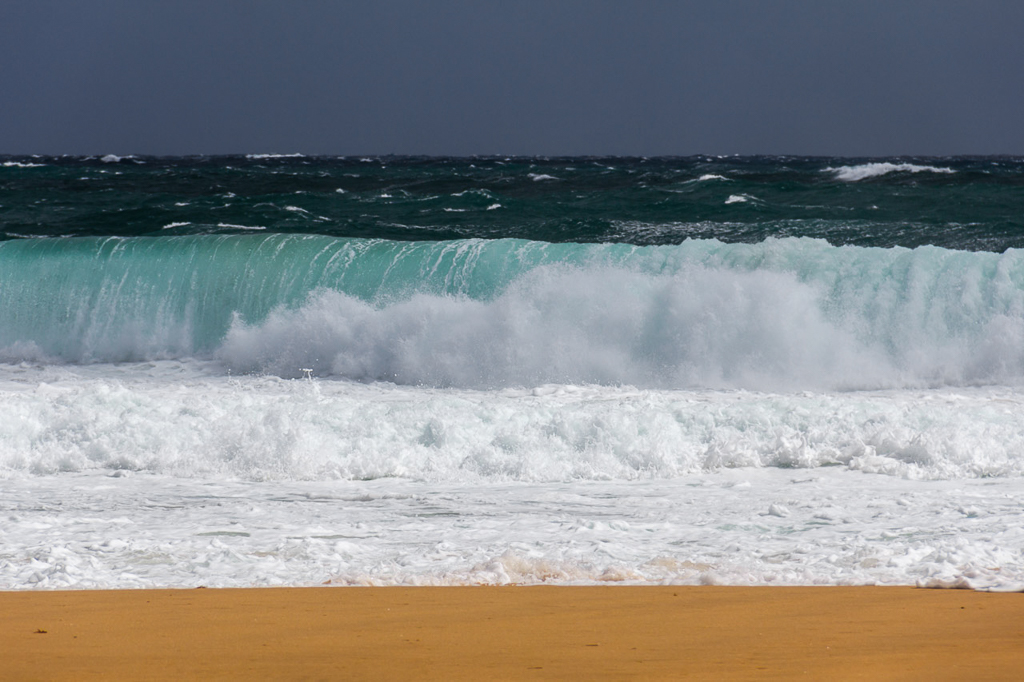 …and I was really happy with the sky. Dark clouds remained out to sea whilst I was in the sunshine. Perfect contrast for picture taking. 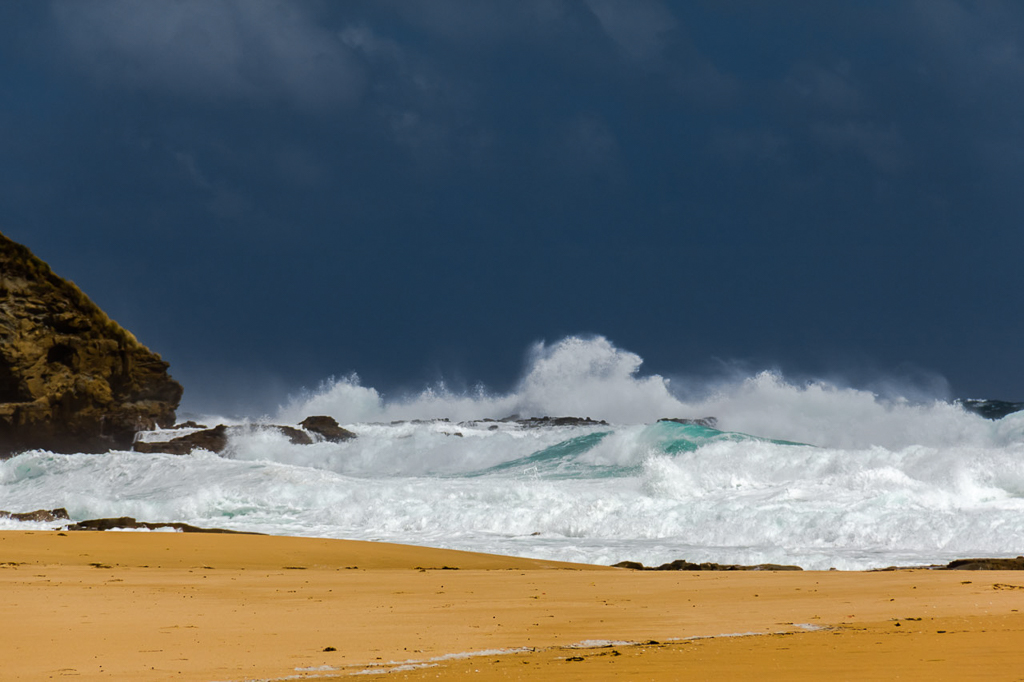 I reached the inlet and had to time my run to avoid getting damp feet. On my last visit here I don’t remember having to negotiate any water at this spot, so it was a bit of a surprise. 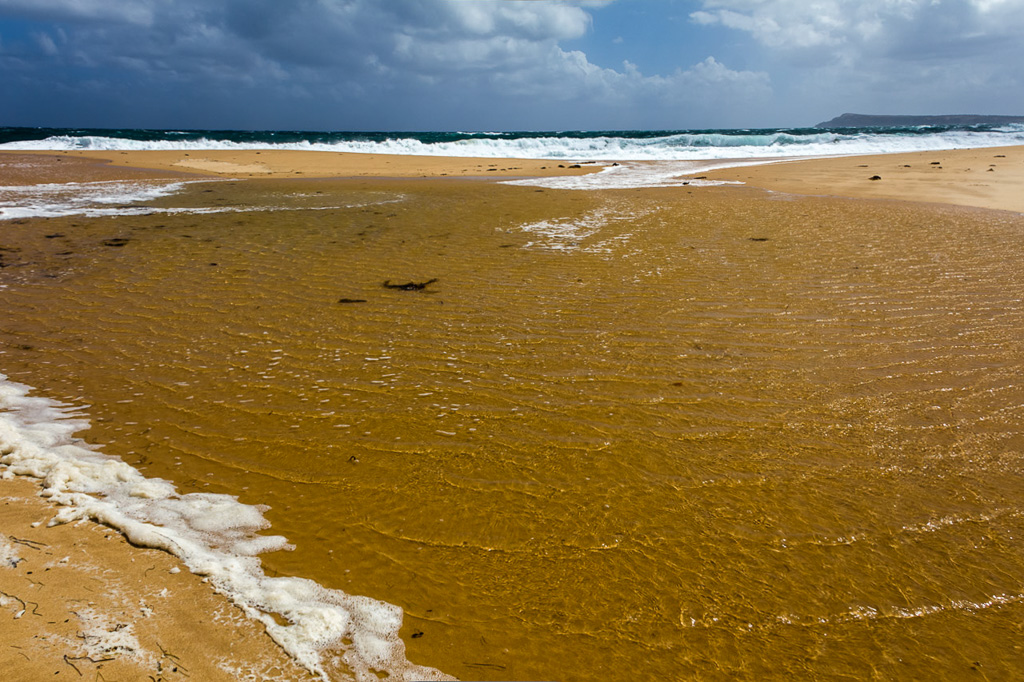 I survived though and then began a climb back up the grassy path to the top of the cliff tops with the wind continuing to buffet the whole time. 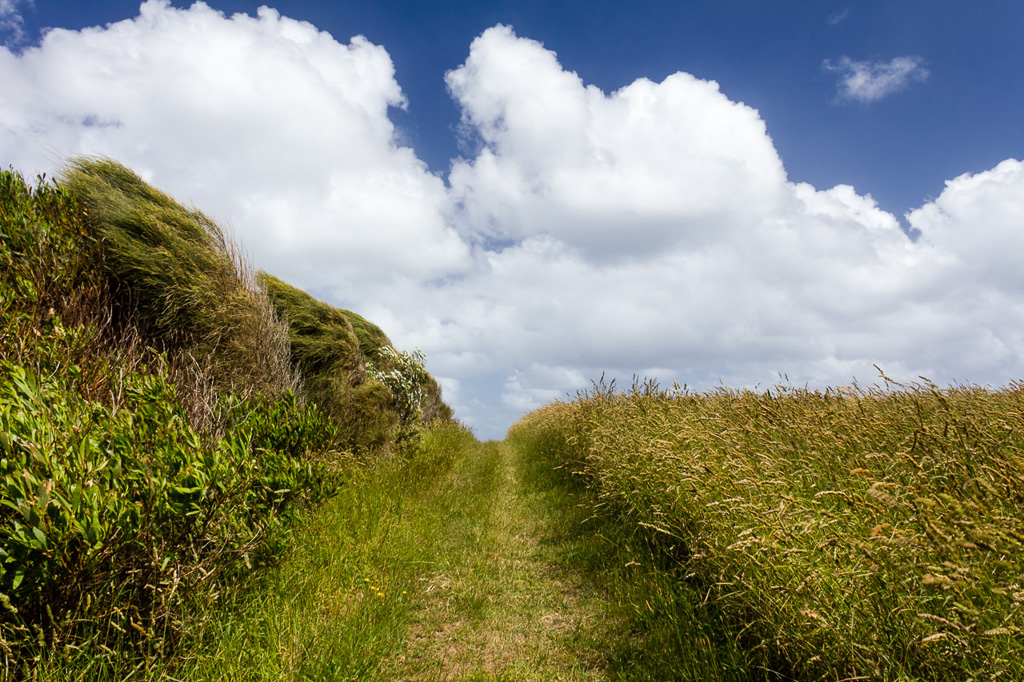 As I reached the top the coastline was again in my sights. 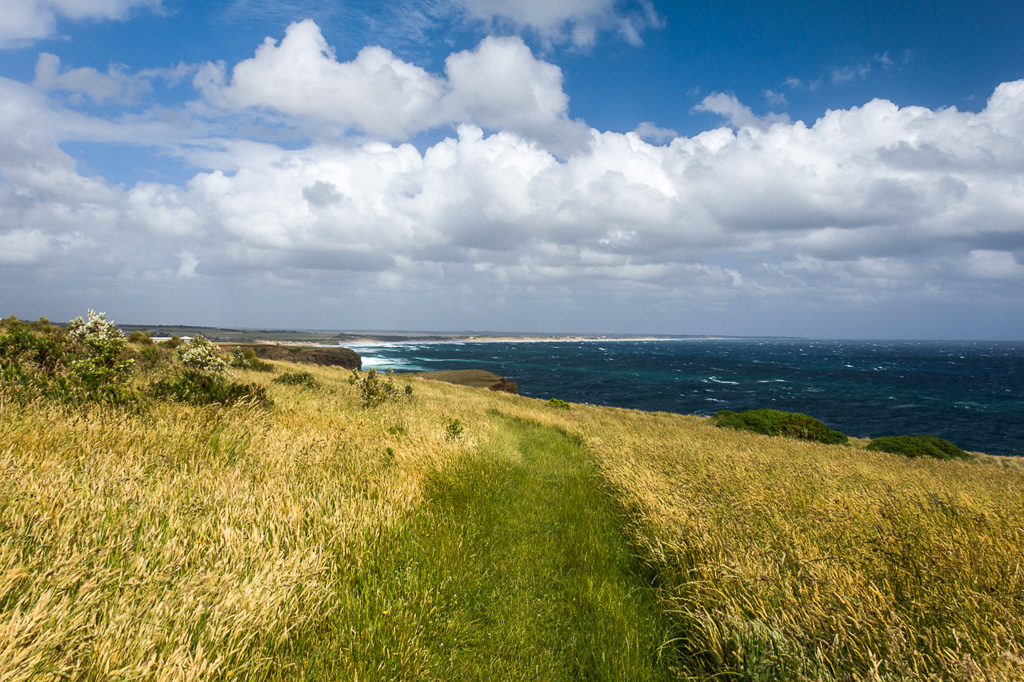 The water had a terrific deep green colour which was brought out by the intermittent sunshine. At times the path passed small inlets with waves pounding the rock shelves and it didn’t look very friendly at all. So much so, I was reminded of the Joseph Conrad quote… 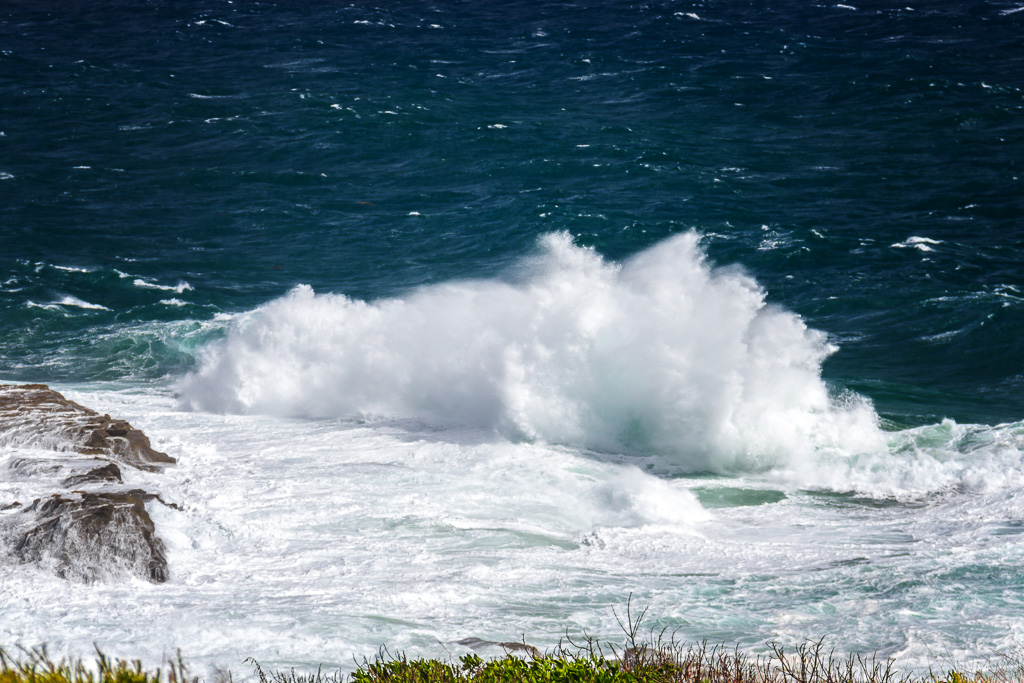 …‘The sea has never been friendly to man’.

Yeah okay, there’s more to the quote, but it’s all I need right now as all it does is mimic what I’d written a minute ago. 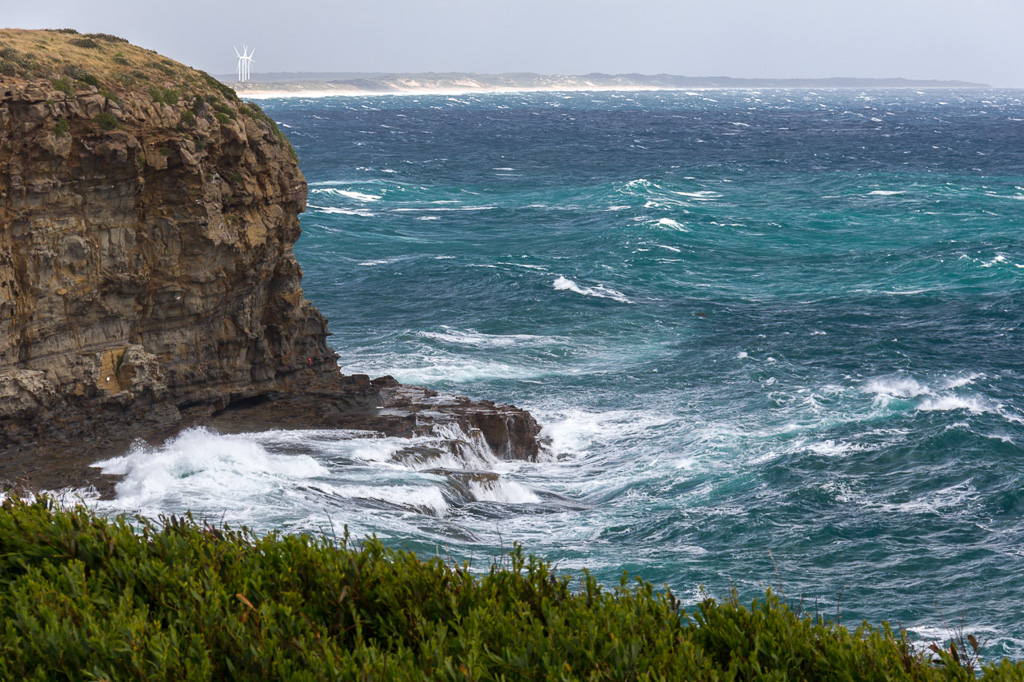 By now I was starting to come across more houses and I’ve carefully made sure they’re not visible in the photos. I was contemplating where I should turn around and head back, but as the path stretched out in front of me I was finding the decision to be a little difficult. In the end the track snaked to a point where I could see a seat and that was where I elected to have a break and then head back. Mind you the official walk was done, as I was well and truly amongst houses now. 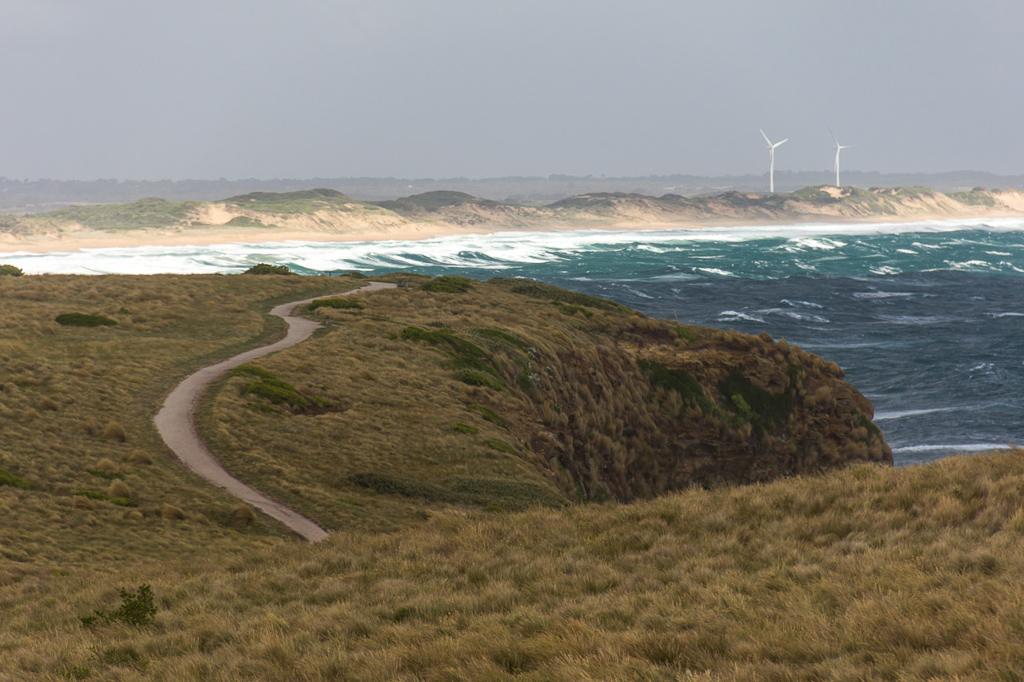 Is that a seat ahead? My turnaround point near Shelly Beach.

So, I reached that little seat that sat exposed to the wind and had a quick break. It wasn’t a long stop, as the wind wasn’t letting up and I had to investigate some wave action on the surrounding rocks. 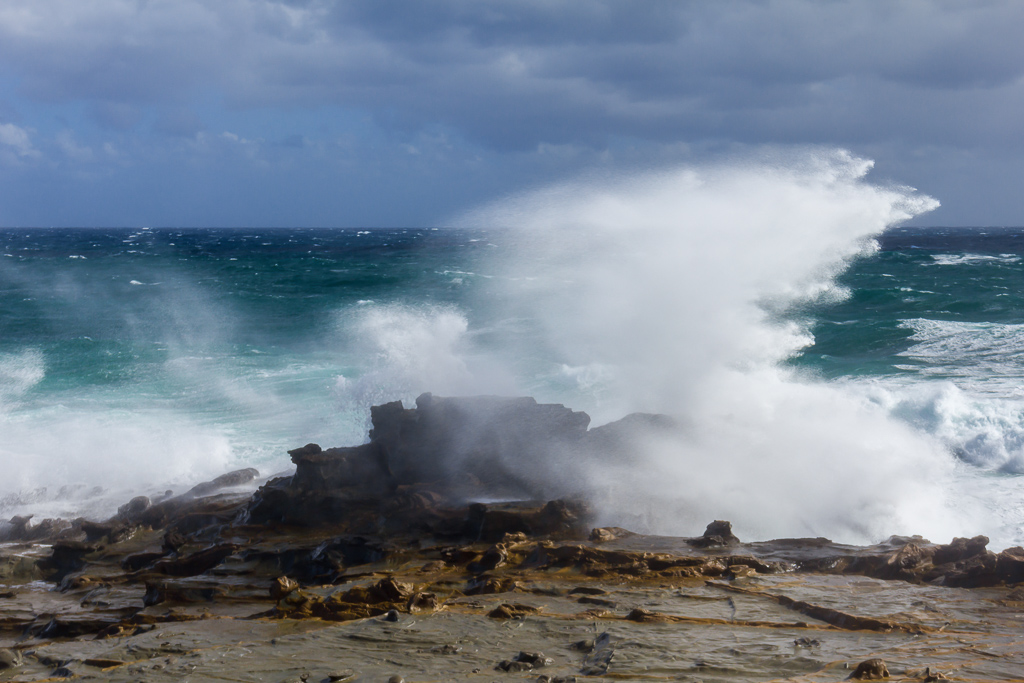 Then I was headed back and you know what the main problem was? It was predominantly a headwind for the walk back to my car. Talk about having to lean forward whilst walking. I was running out of puff on some of the undulating cliffs, but I was still making pretty good time. Retracing my steps, but descending back onto the beach and negotiating Sandy Waterhole again. I remained dry, but the hood was in use again to protect me from the stinging sand. 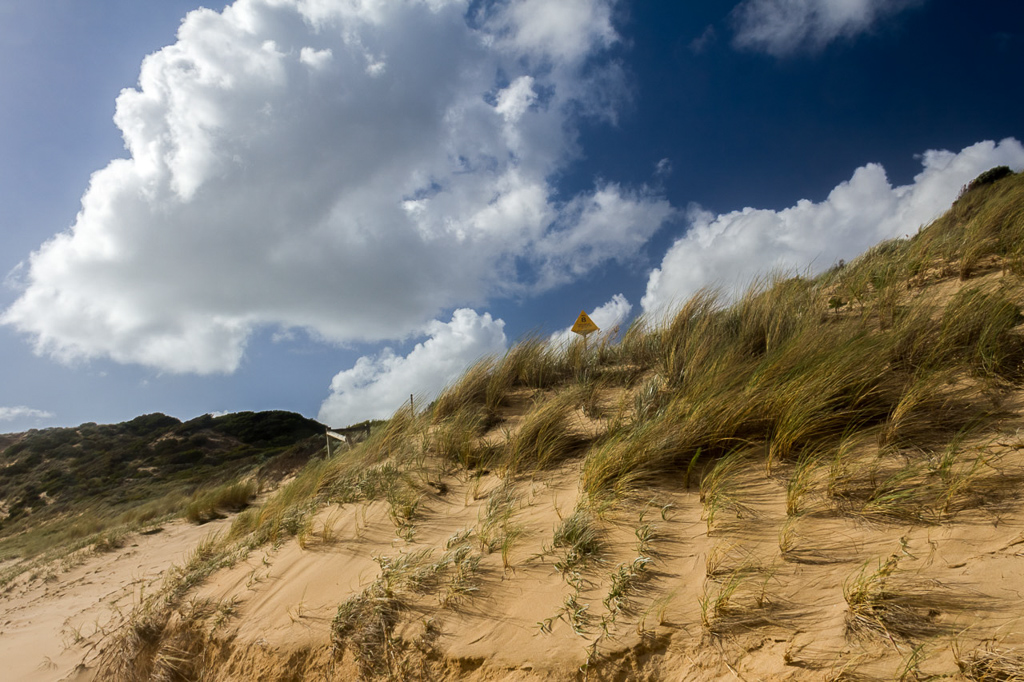 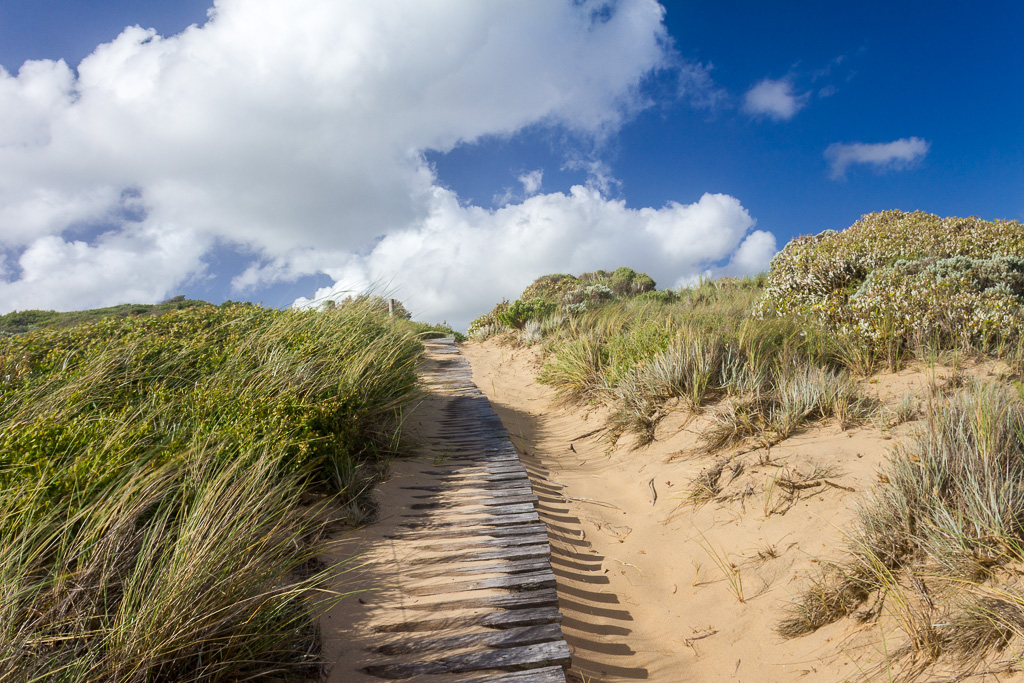 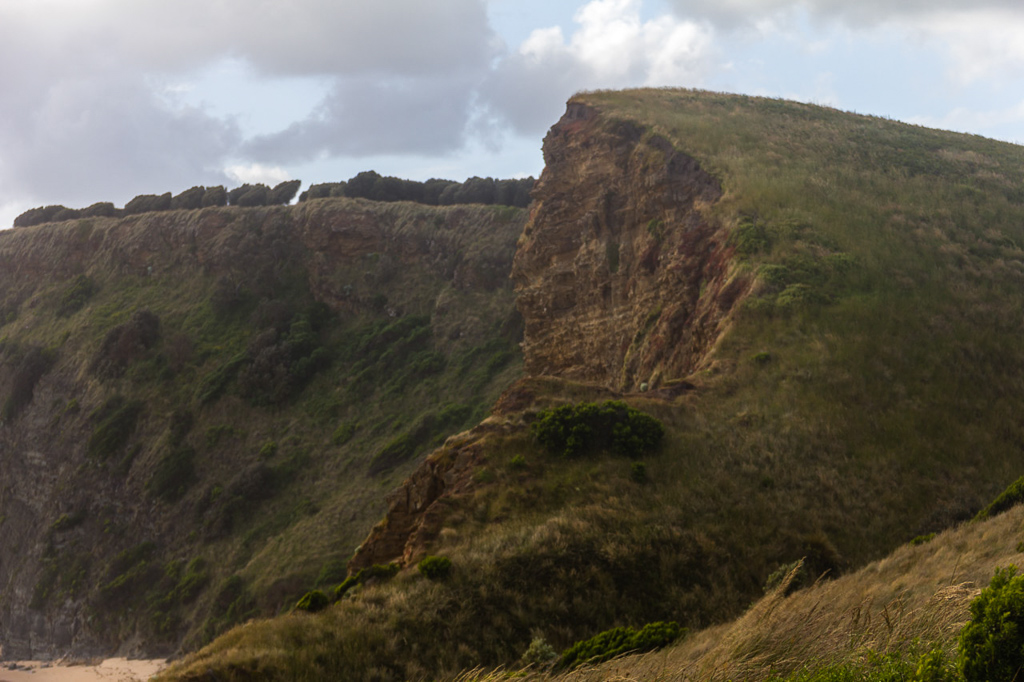 …and before I knew it I was back at the car.

I love a coastal walk and the George Bass one is definitely one of my favourites. If the weather is rubbish it’s even better! It’s a pity the tide was high, so I didn’t really get any beach walking done, but it was fine to stick to the cliff tops. So, that’s that and I must now be off to the police station to report the theft of my humour. Hopefully it’ll be in a Second Hand Dealers shop somewhere and I can get it back. 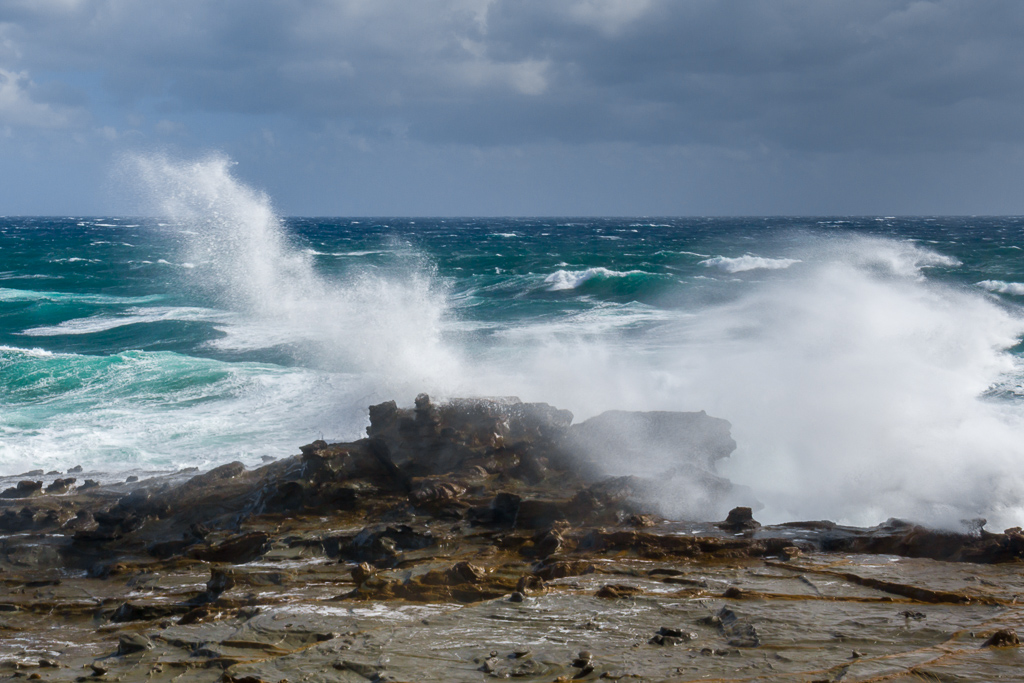