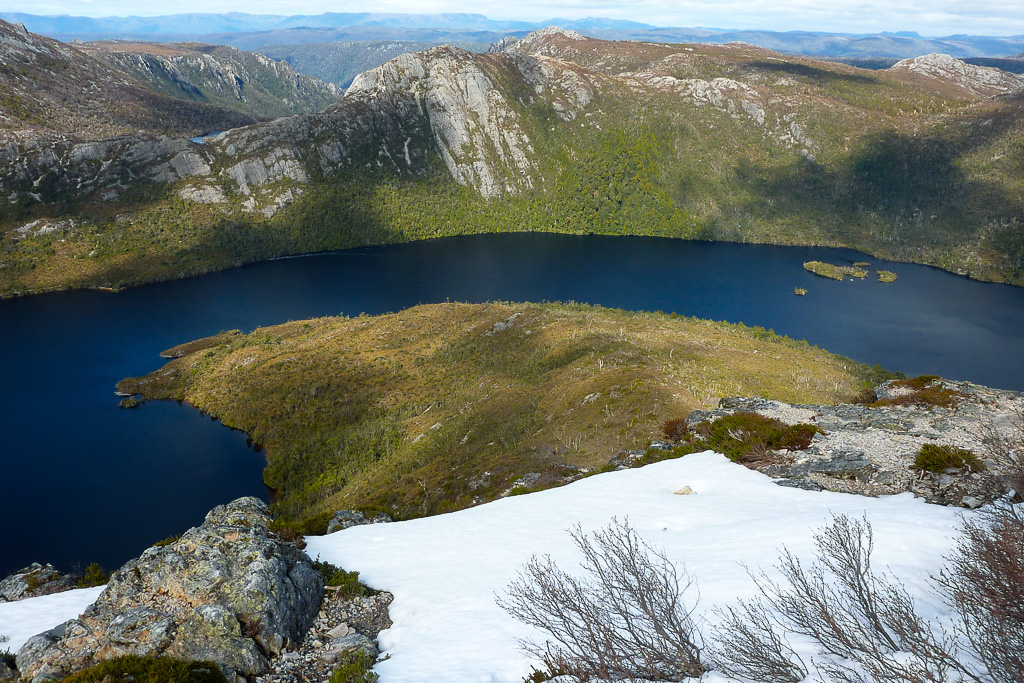 Anyone who knows the Cradle Mountain area will look at the title of this post and say, “Did he only walk that far in a day?” Well, yes I did, but don’t forget I only had half a day once I hit the board-walk at Ronny Creek with the uphill slog to Marions Lookout to come. Actually, I’m not sure if that’s a good enough excuse?

I must say though. My intentions were to walk to the standard first night stop of Waterfall Valley. The only reason Kitchen Hut came to mind, was the parks staff told me to not bother trying to make the valley, as snow across the Cradle Mountain Plateau would impede my progress. Huh! Have they seen me walk before? Walking in deep snow is my standard speed. Even on a footpath in summer. Anyway, all you’re getting so far is the leg from Ronny Creek to Kitchen Hut, where my aim was to make it with plenty of daylight to spare.

The opening of the walk is a casual affair on nice boards, but even then I was waddling a little from the small car that was on my back. Although the start was simple, there were highlights almost immediately. About 200 metres in, I was confronted by two blokes heading in the other direction who appeared to have been hiking in a coal mine for the past month or so. They had to be the dirtiest looking blokes I had ever seen on a hike and I’m not sure where they’d been. Day hike? Western suburbs of Melbourne?

Considering the apocalypse that had occurred the day before, the weather was fine and sunny. I made pretty good time to reach Crater Falls which is a nice spot amongst trees, but you know what? Waterfalls in lowlight due to the overhead vegetation meant all the photos I took on the Lumix were, how do you say? Crap? About the only photo I liked from the bunch taken here was this one of the sunlight filtering onto leaves above the water. Well, in hindsight even that photo could be better. Don’t you hate photography? There’s always something I can see wrong in just about every photo I ever take. 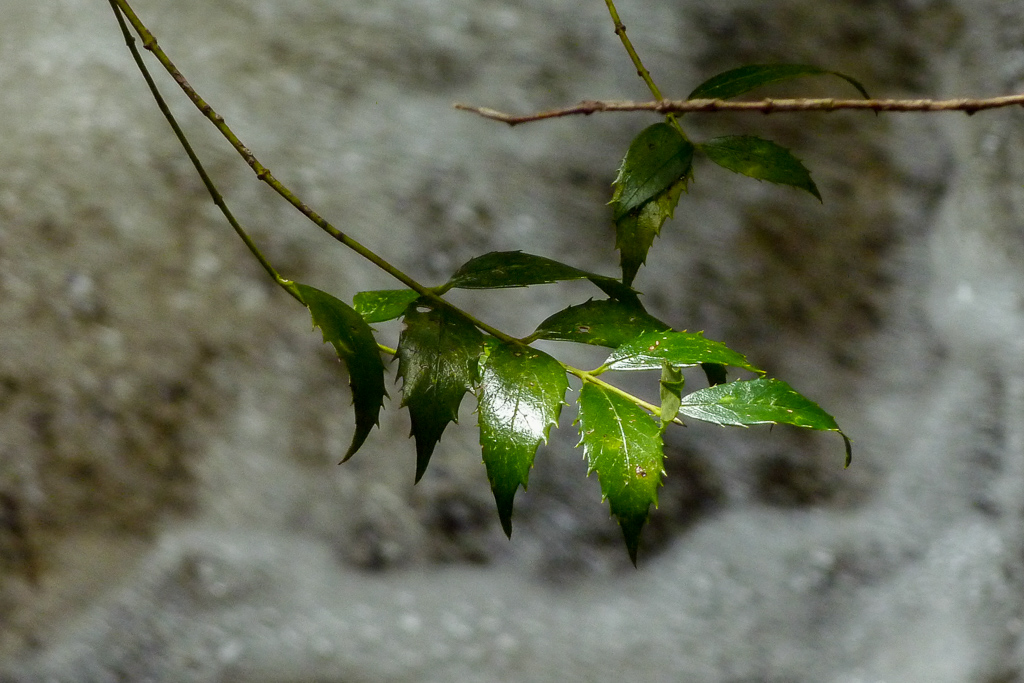 I left the waterfall behind and continued to chug along to my next destination being Crater Lake. There’s a boatshed on the waters edge which I’d seen a million times in photos, so I was looking forward to a closer look. 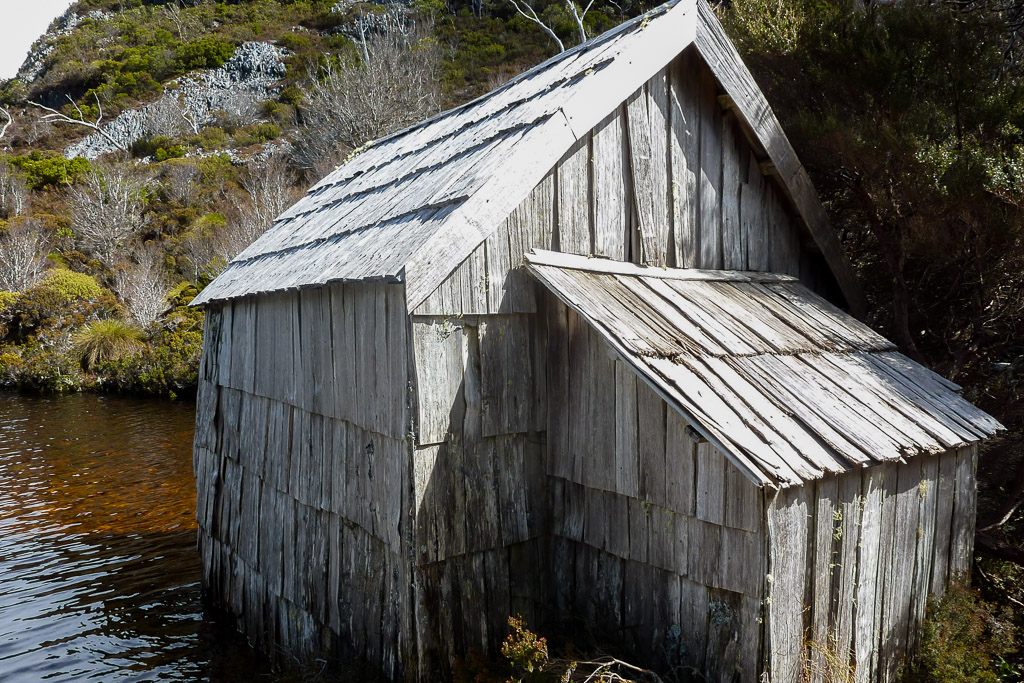 The shed is long disused and I really wanted to spend some more time looking around this spot, but I had to keep moving. What’s interesting is all the photos on this trip could have been better, as I’d left the camera on it’s default setting of 4.3 in relation to framing. I think 3.2 looks better and have corrected it to those dimensions. Did I know any of this in 2009? Nope.

Passing the lake I now began the steady climb up to Marions Lookout. Frankly, this was a pain with the pack I was carrying. The track reaches a steep incline in which a chain has been installed to help punters such as myself drag themselves up. I was also duelling with a lot of day walkers who were bounding by with postage sized packs on their backs. 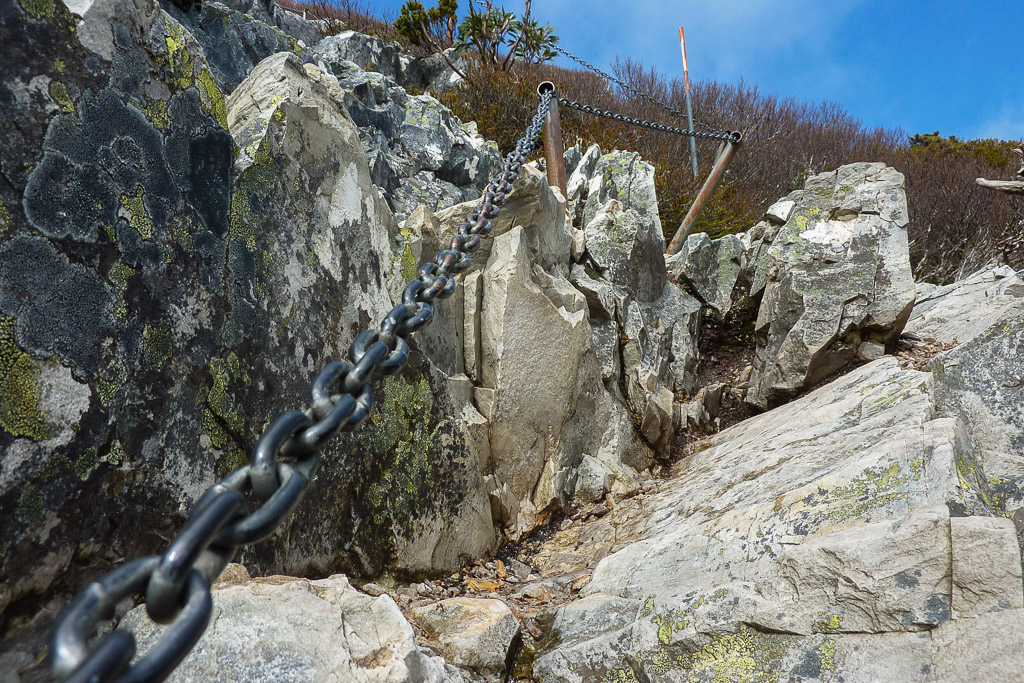 Chain leading up to Marions Lookout

I made a point of being super courteous on this section. If I saw someone about two kilometres away I’d stop to wait for them and exchange greetings as the passed by. I’m a friendly bloke aren’t I?

You know those last few lines are crap don’t you? Yes, I did wait decades for people to descend whom I’d seen approaching with my portable Hubble telescope, but the real reason I was being so generous with the passers-by is I was ready to vomit from the effort. Don’t laugh, but in order to speak calmly I’d regulate my breathing as we spoke to give them the impression I was a pro who did this sort of stuff everyday. Pretty embarrassing, hey? The multiple stopping did give me a chance to look back from where I’d come, with Crater Lake in full view during the climb. 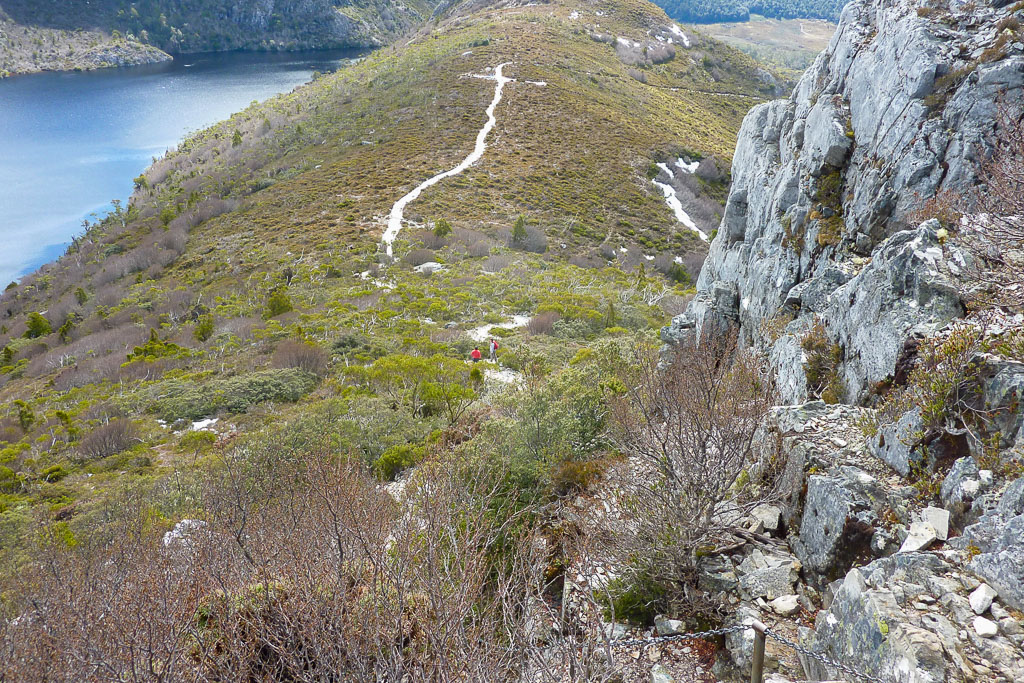 Looking back whilst climbing to Marions Lookout

It took a while, but I finally reached the top and there were literally dozens of people about taking in the fantastic views. There’s Crater Lake on one side… 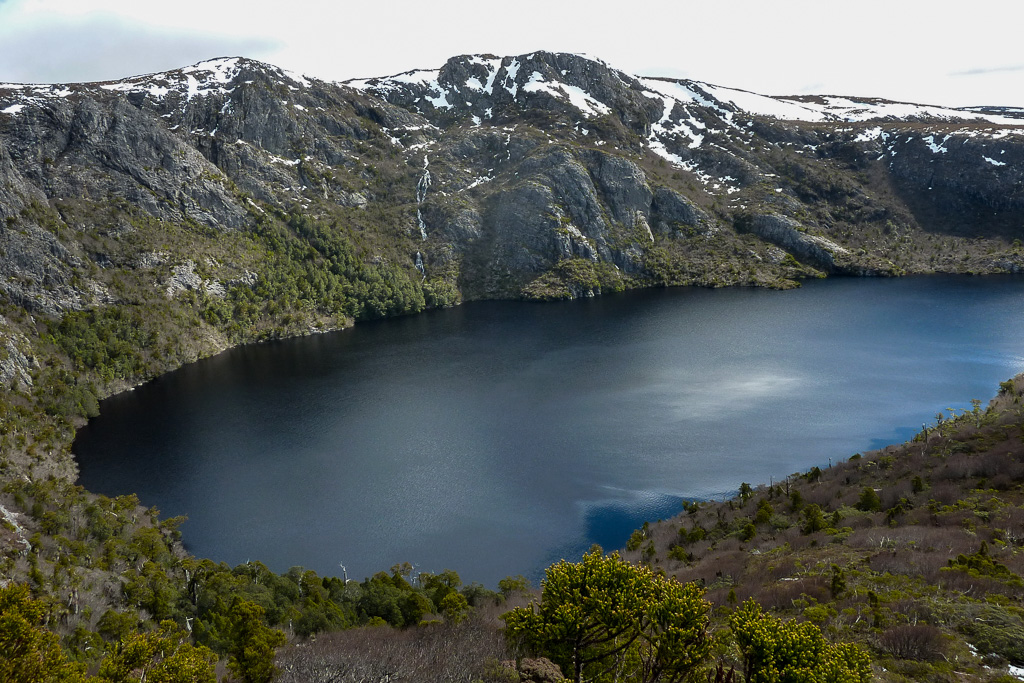 …and Dove Lake on the other. 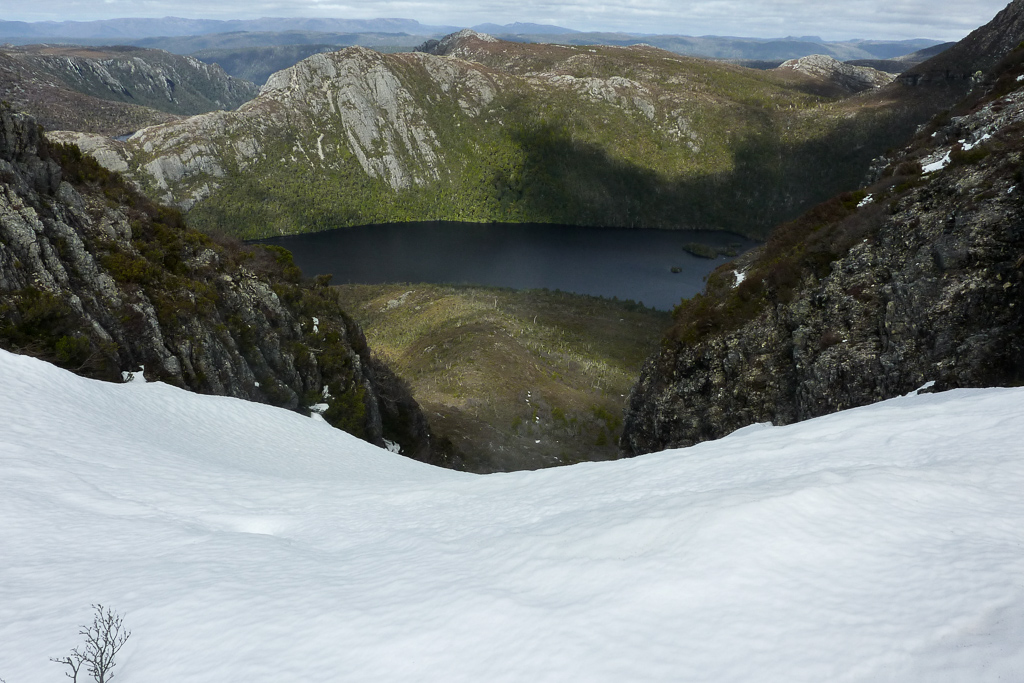 There was also the odd snowman. Look, they were all pretty piss-poor, but at least an effort was put in. This is one of the ‘better’ ones on a track sign. 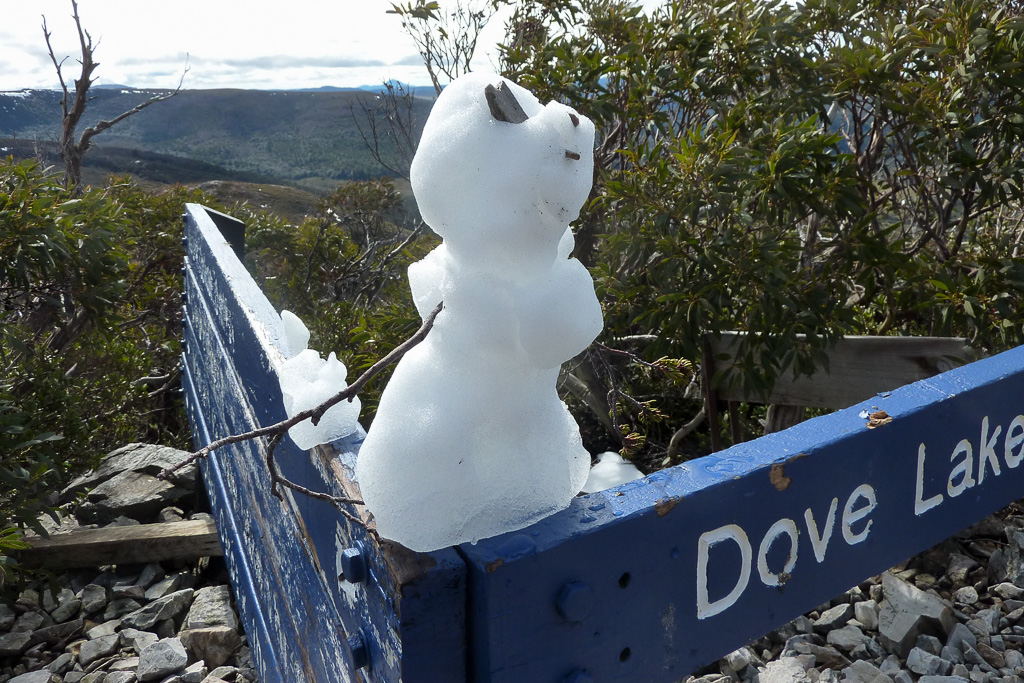 Things were a lot different now I’d reached some height. The sun was still shining, but it was a lot chiller which meant rugging up against the cold. Cradle Mountain was looming ahead and it’s an interesting looking mountain. It looks like the top has been lopped off, as it doesn’t have any sort of a traditional peak, but rather hundreds of dolerite columns. 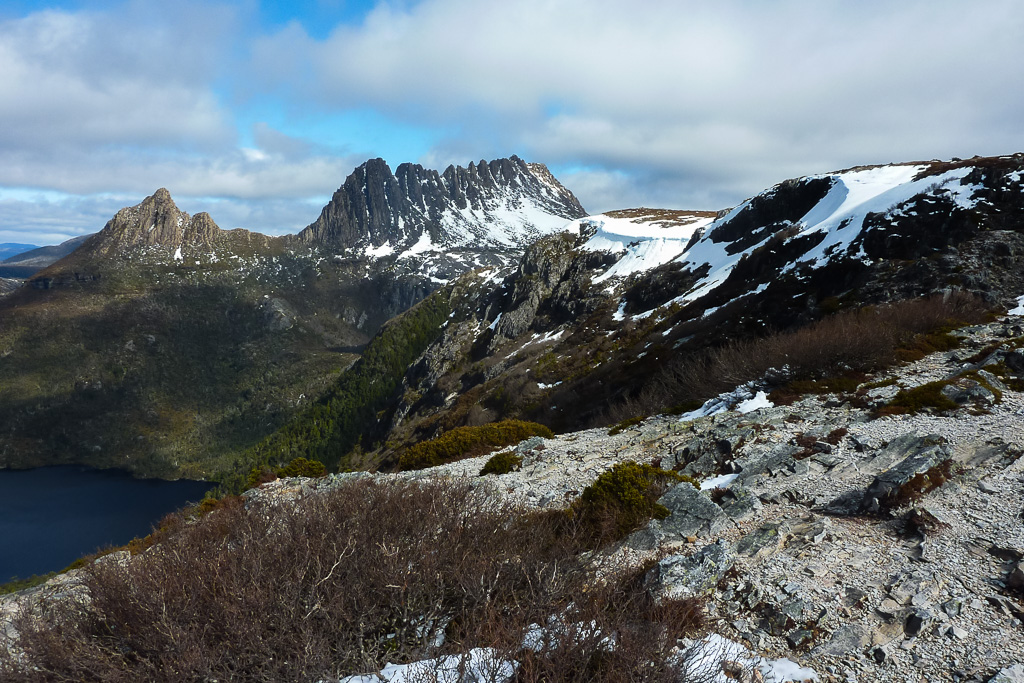 Cradle Mountain in the distance

There was some snow around, but it didn’t look too bad. Now, with the hard climbing out of the way, I was confident of cruising up past Cradle Mountain and if I was making good time, continue to my original destination of Waterfall Valley Hut. What do you reckon? Famous last words? Not in this blog surely?

Well, so far you’re wrong as there was only patchy snow to negotiate and Cradle Mountain was now getting closer. 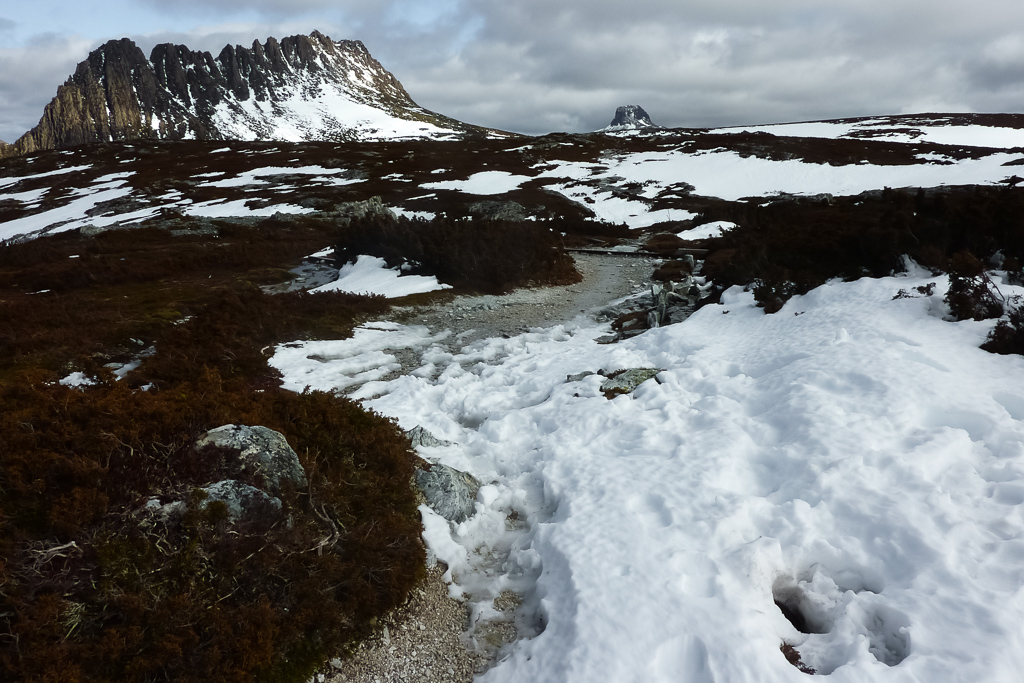 I was going well until I came across a few undulations which although weren’t steep, they did have lots of snow in the depression of the hills. I elected to stick to the track by following snow poles, but it was at this point I came to a crawl. The snow was deep and soft with most steps being knee deep and sometimes further. Having that bloody heavy vehicle pack on my back was not ideal at this stage.

What did I expect? I wanted snow and now I had it, but I’d prefer some harder stuff rather than the quicksand I was given, thanks. I’ve no idea what was below me, but at certain points I could hear water running underneath. It was about this point I officially abandoned my tilt at getting to Waterfall Valley Hut. I don’t mind walking in the dark with a headlamp, but I didn’t want to do it in snow. I’d never tried it before and this wasn’t the place to start practising. 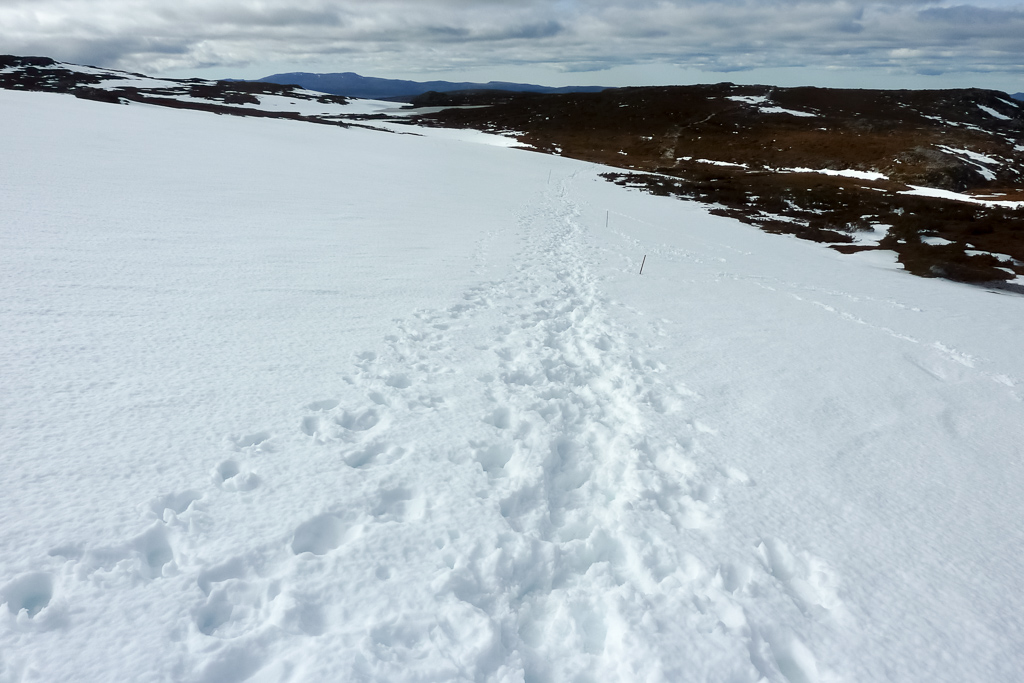 Looking back at Marions Lookout

Somewhere before in a post I’ve written about what happened next. I’ve no idea where though, so I guess I’ll have to write it up again. Right. Most steps were knee deep which I was slowly getting used to, until something gave away below me and I sank with one leg up to my hip. I could hear water rushing underneath and with the other leg at a weird angle I was a little stuck. Lucky for me though I was walking with a pair of Exped trekking poles that said ‘Mountain’ on them, right?

Well, no. As I sunk a pole into the snow in order to push myself up I became aware the pole had separated with the bottom half buried in whiteness. All that was left in my hand was the top half of the pole which was no longer than a standard spicy sausage. “How could this be so difficult?” was my thinking. In the end I dropped my pack and dug around myself to extricate my leg, as I found it impossible to lift in that sunken position. Then it was digging time again to find the other half of my trekking pole. When finally done I was able to step back and take a photo of the offending chasm, although it doesn’t look too bad in the picture. 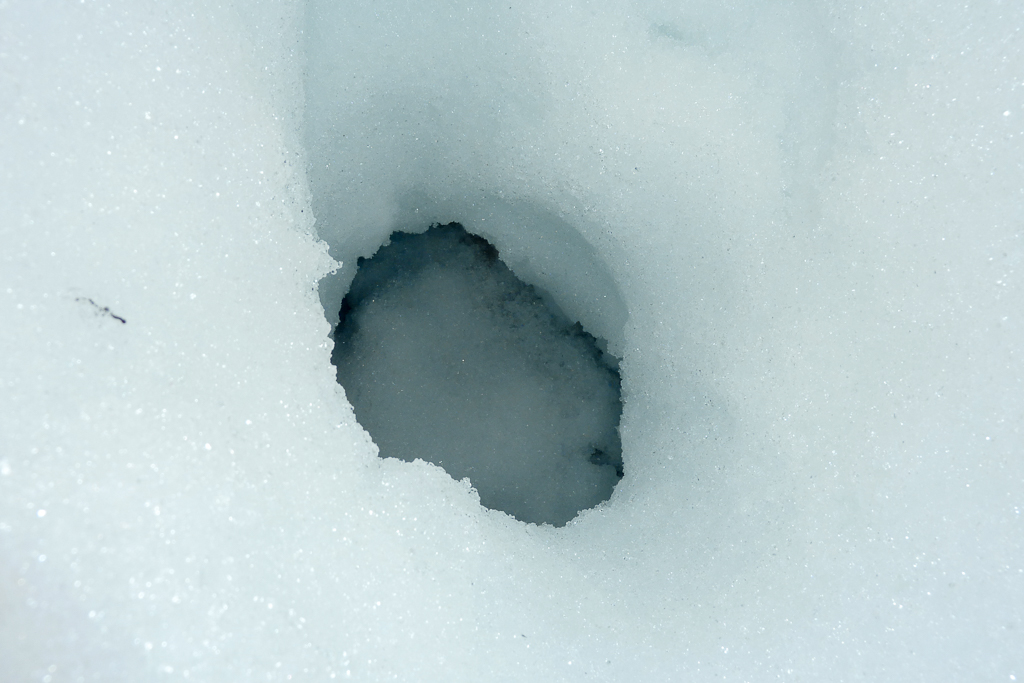 The snow release program had taken a while, but I managed to slog on with Kitchen Hut now in sight which was where I was going to stop. It was getting late in the day and I was looking forward to putting the feet up for the evening. It’s actually listed as an emergency hut where accommodation is frowned upon, but that’s the way it goes. 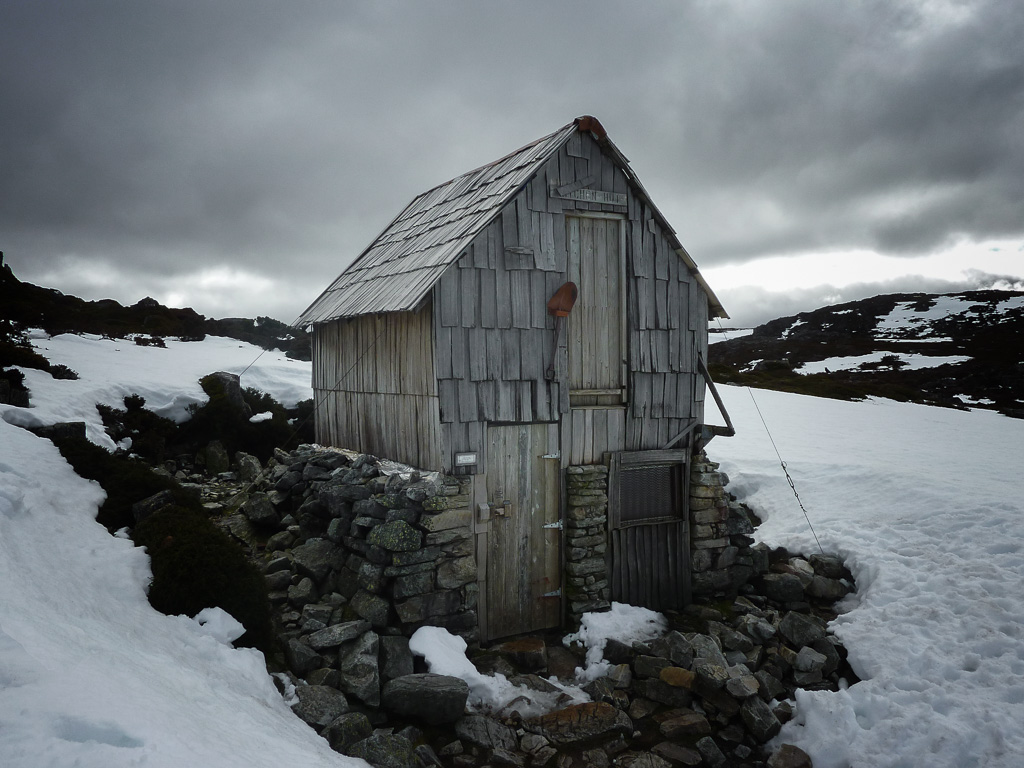 It’s a nice looking hut which is in two levels. The bottom half was wet and not the place to have a nap, but the upper level was dry, so that’s where I elected to sleep. If you can be bothered to look online, I’ve seen photos where snow is as high as the upper door next to the attached shovel. That’s some bloody deep snow to be up there!

I put my stuff on the ‘top deck’ and elected to cook and eat outside, so there was no chance of me doing any damage to the hut. I even had reading graffiti material on the walls of the hut to read when going to bed. I was going to post a picture of one of the drawings which wasn’t too bad as a drawing with an exception. No problem if it was on a piece of paper sitting on my kitchen table, rather than on the interior wall of Kitchen Hut.

Anyway, whilst fossicking around I was surprised by a woman and young boy who came by the hut. We had a chat and they said they’d come on a day walk and had attempted to climb Cradle Mountain, but turned back due to the snow. They were hoping to return to Dove Lake by the Face Track which was apparently nearby, but after following it initially they gave up as they lost the track and weren’t confident to keep going.

Now, the story of meeting these people isn’t important right now, but it’s needed for the next post when I met the ball-breaker who I mentioned in the previous entry. You’re just going to have to wait I’m afraid! 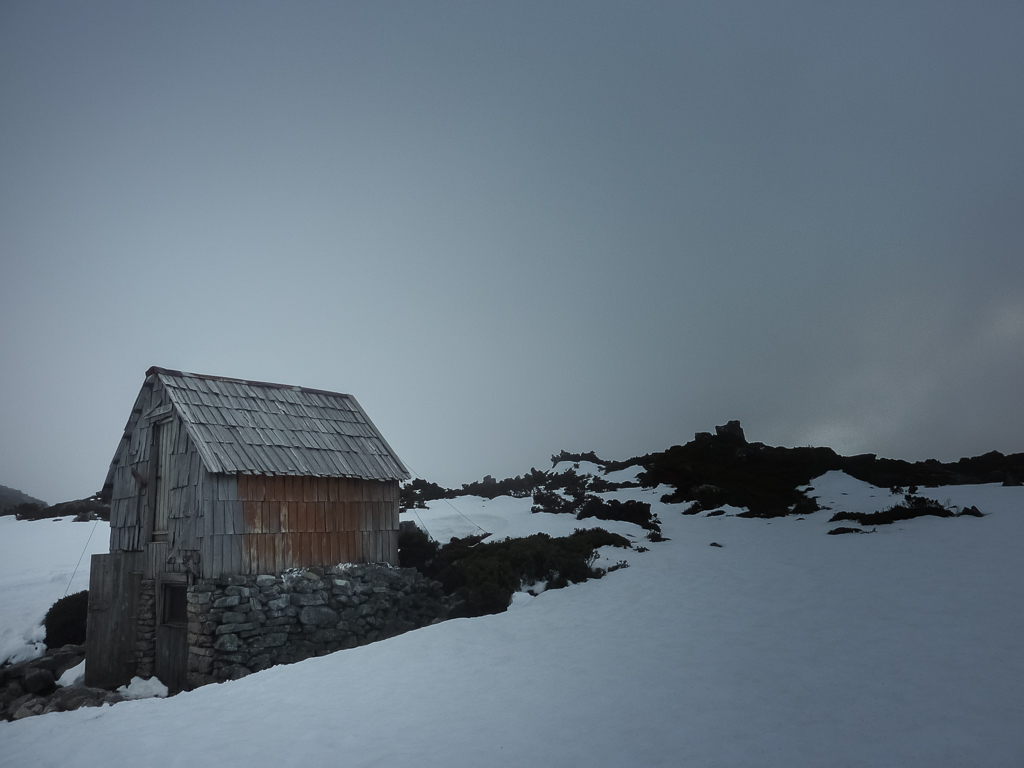 So, that was it for a fairly jam packed day since my bus trip from Launceston in the morning. There were no more people walking through, so I had the place to myself whilst I potted around outside in the snow eating dinner. What do I think the bonus of snow is? There’s no worries about running out of water. 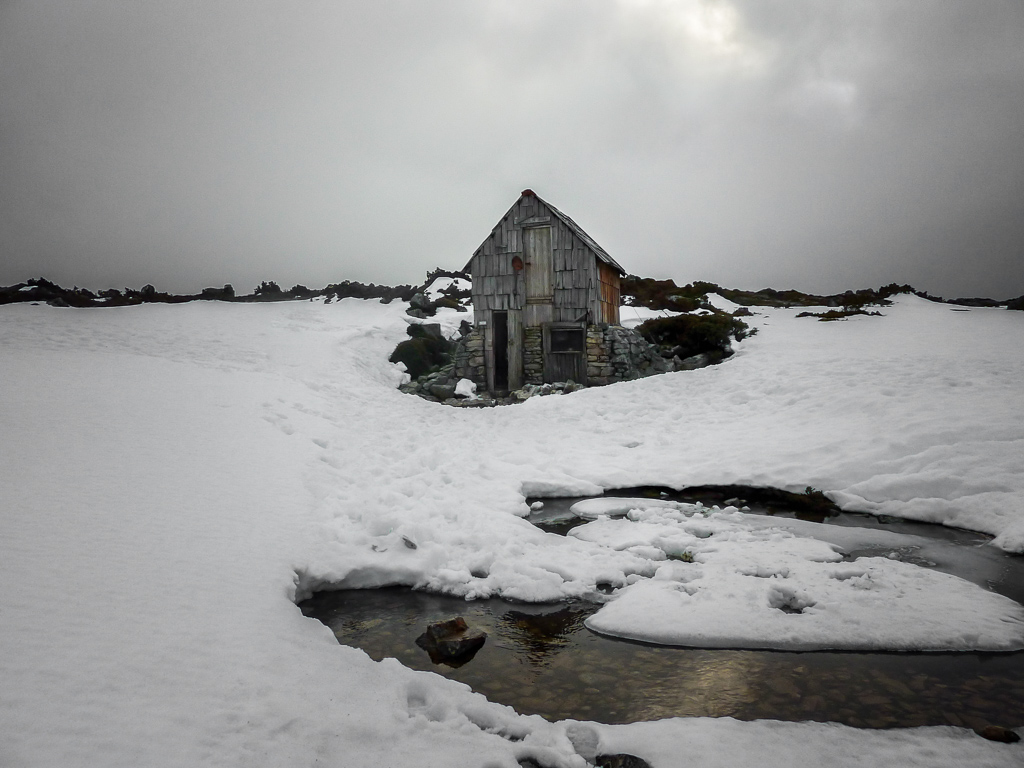 As the light started to fade, I decided if the weather was fine in the morning, I’d attempt to climb Cradle Mountain. Well, explore it at least. Weather was hard to predict that evening, as clouds descended and for the most part I couldn’t even see the mountain let alone work out a way up. So, I retired to my graffiti and contemplated a chilly evening at Kitchen Hut. 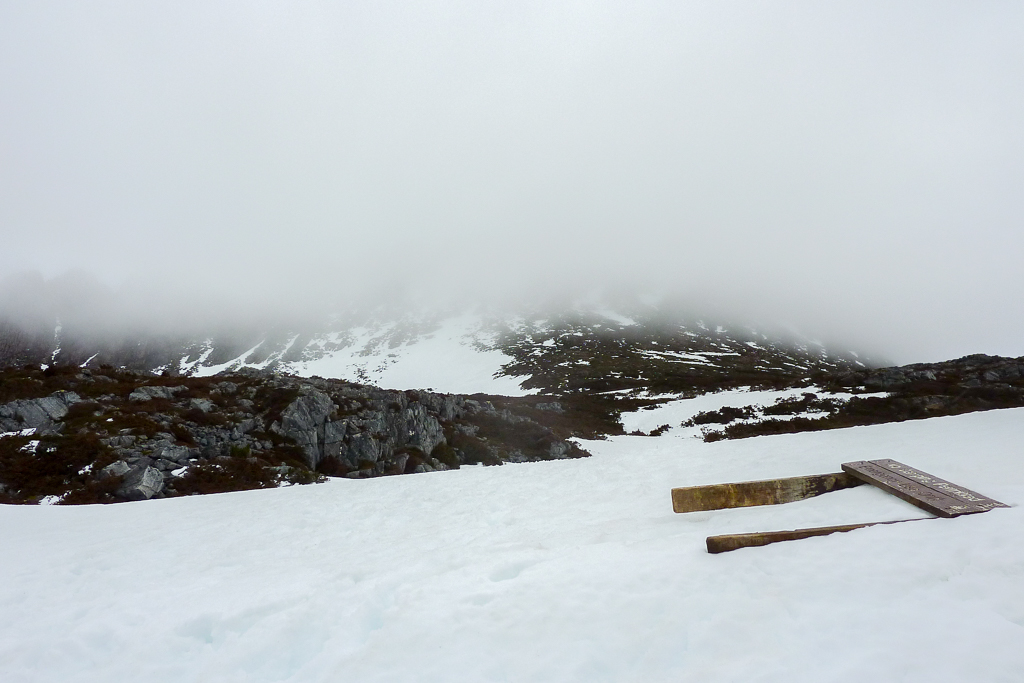