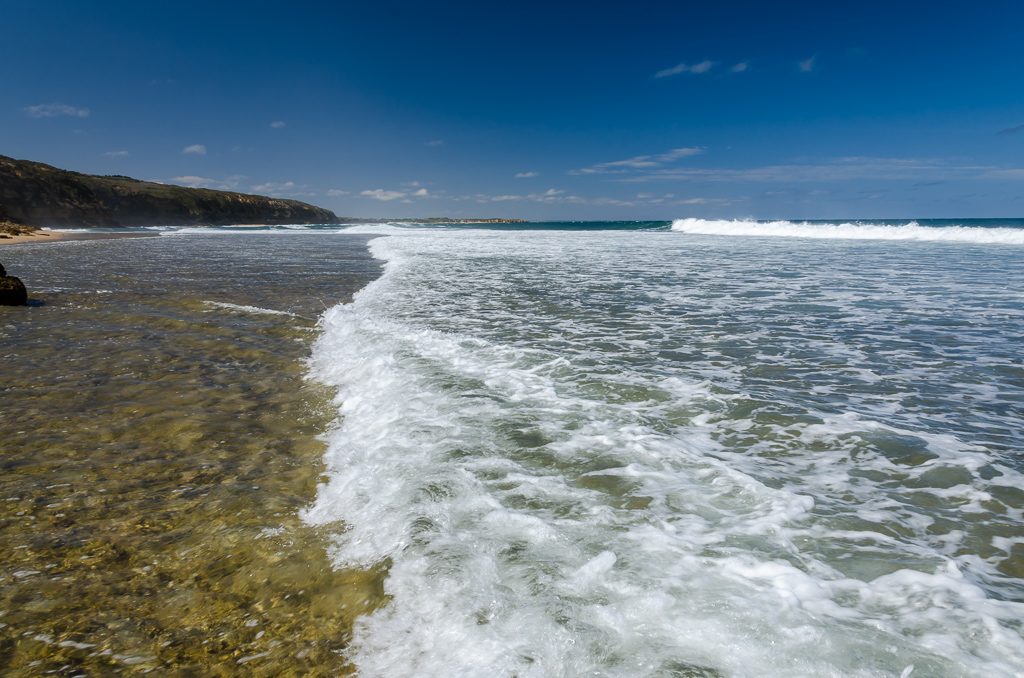 Well, this is the last of my beach walking posts for the time being and it also happens to be the shortest hike in the coastal trilogy. You’re probably munching on your toast wondering, “Hang on. He did the Bells Beach walk only a few weeks ago”. Technically, that’s correct, but in my Bells Beach post I started at Bells and walked west.

The difference with this entry is the walk was to the east of Bells Beach, but to confuse you even more I was walking from east to west before returning. Are you scratching your head? Okay, in order to make this simple, I wasn’t walking west from Bells, but east was the starting point and I walked west before heading east. See what I mean? It’s so simple when you think about it. If you’re still not sure all I can suggest is to pick up a rolling pin and belt yourself in the forehead and then re-read the previous paragraph, as it makes perfect sense whilst you’re concussed. I also suggest not to give your partner the rolling pin as you may be belted more than once.

This walk is included in the the book ‘Daywalks Around Melbourne’ which is available from the Temple of Tempest. He calls it Torquay, Jan Juc and Bells Beach. Not a bad title, but I wanted a bit more flow. So I’ve gone for Torquay to Bells Beach via Jan Juc. See the difference and how easy it is to say? I think.

Anyway, there’s one thing required for this casual walk. The tide must be out. None of this ‘maybe’ business. It has to be out! Why do I know this? Well, I didn’t exactly time it too well, but I ‘sort of’ got it done as per the books notes.

The starting point (remember it’s east of Bells Beach and we’re walking west) is on the fringe of the coastal town Torquay. I’d got my tide timing perfect as I arrived at low tide to begin walking on the beach. The only trouble is I was hungry, so I side-tracked to the local bakery and sat down to eat whilst reading the Sunday newspaper. I’m telling you, one doesn’t get to 100+ kg by eating lettuce and alfalfa, so I was eating up big at the bakery which meant I probably totally blew my previously perfect tide timing.

Anyway, I rolled out of the bakery and headed down to Torquay beach which has a rocky headland to negotiate. Guess what it’s called? Yep, it’s named ‘Rocky Point’. They’re pretty unusual looking rocks as well and the thing I noticed the most about them is they looked really, really painful. Lots and lots of little jagged bits of rock that would be ideal in ripping out pieces of flesh if you were lucky enough to fall face first onto them. 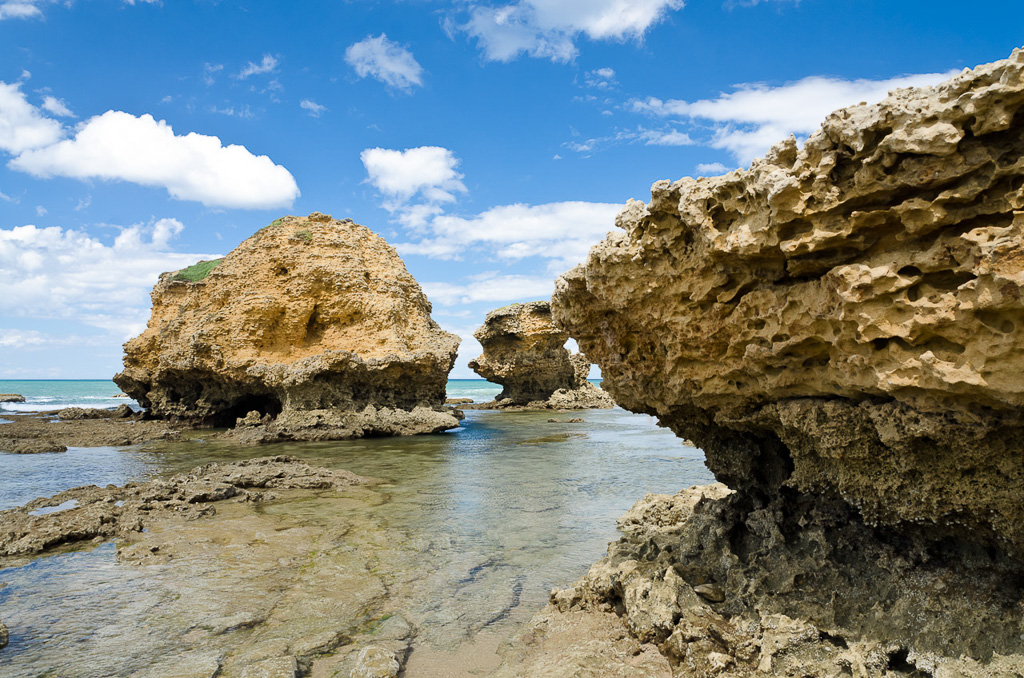 I dressed appropriately for this walk by wearing Teva sandals instead of shoes and they were immediately in use as I was wading from the start. There’s one thing about wading through water though and that’s waves coming in look huge. The waves in the picture below looked house size in height whereas in reality they were no larger than the average turnip. 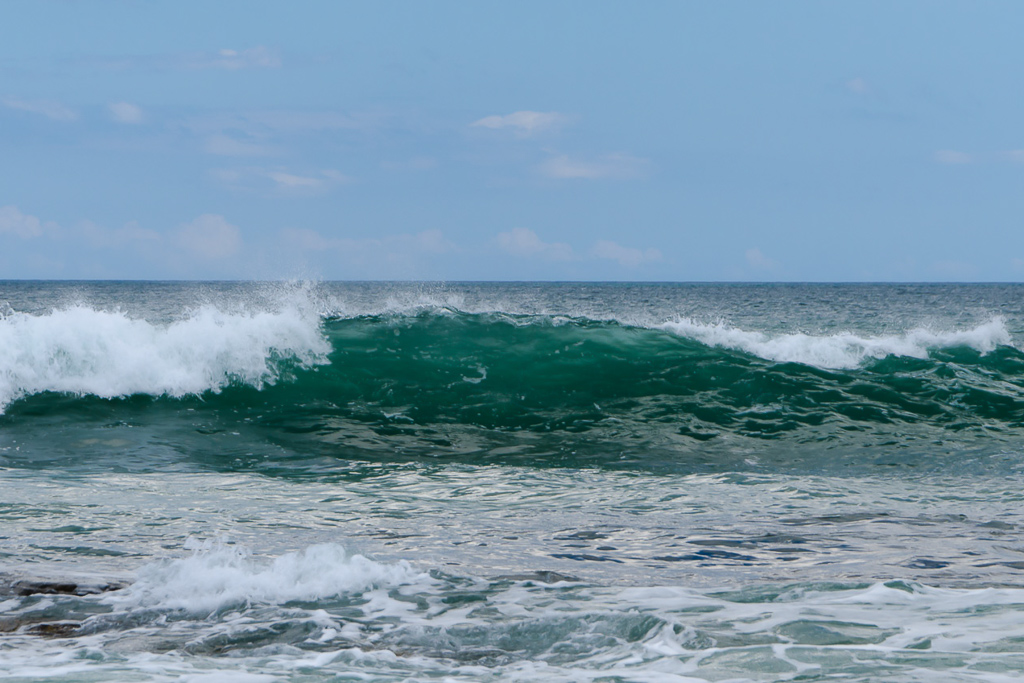 I continued my ocean strolling as I headed towards the main beach of Jan Juc which is at Half Moon Bay. I was going pretty slowly to minimise falling over onto the flesh shredding rocks. 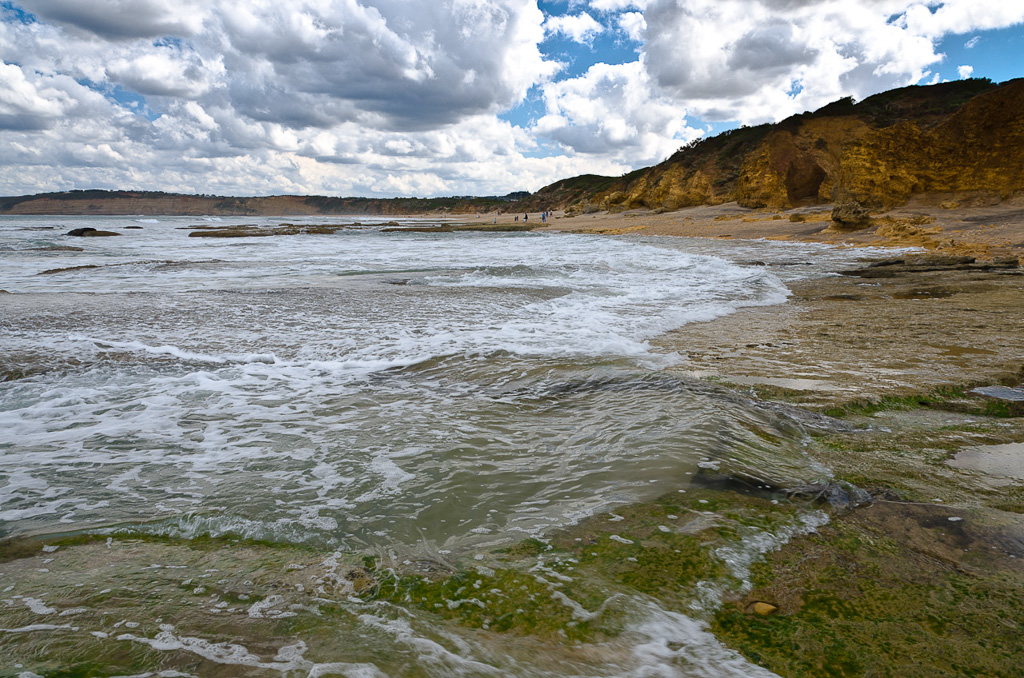 I was quite thankful to reach the sand in one piece and continued on weaving around a substantial amount of beach going punters and Surf lifesavers. 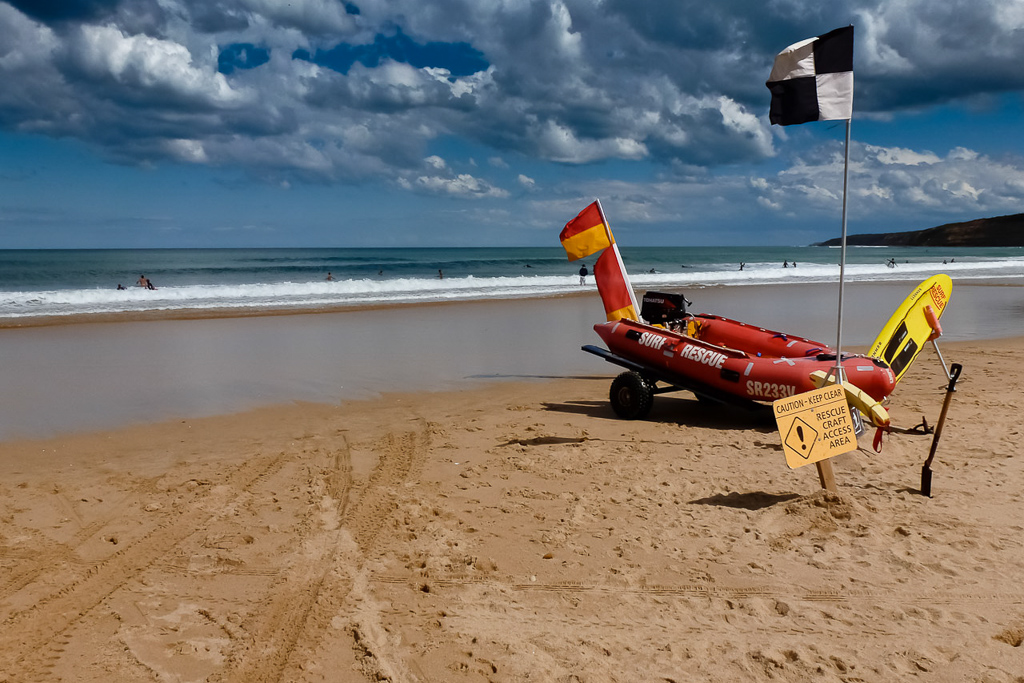 Bird Rock was my next destination which is an outcrop at the end of the beach. After this the walk continues at the base of some towering cliffs in which low tide is needed to negotiate this section. I continued strolling in the water which was very relaxing. 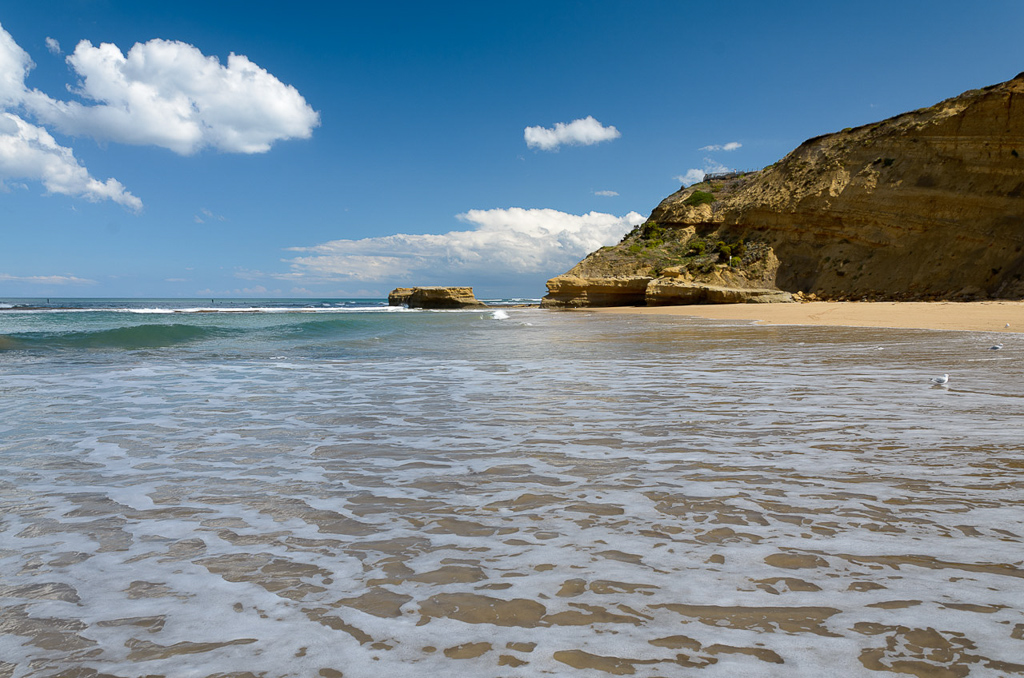 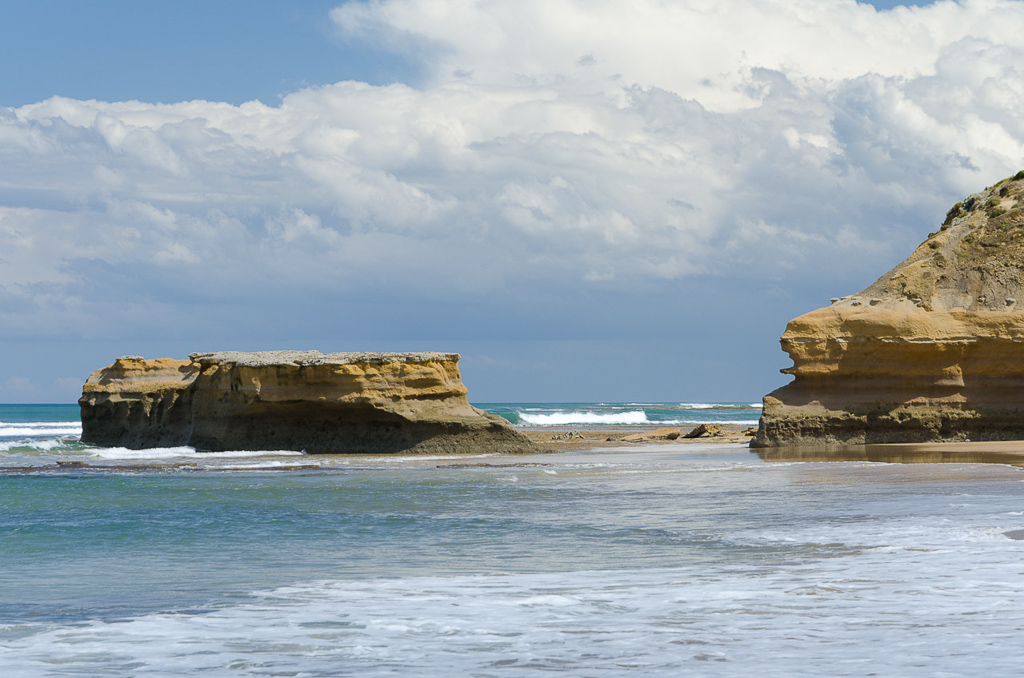 There it is. Just in case you missed it in the last photo.

Actually, I think the resemblance to a bird is pretty far fetched. Not unless they mean it looks like a bird that’s been run over by a car. Then again, it might be another rock? If that’s the case, I’ve managed to get lost on the easiest walk known to man whilst being surrounded by hundreds of people. I’m putting my dubious reputation on the line by declaring the two photos above show Bird Rock. If not, well I’ll just adjust the blog later and you’ll be none the wiser. That’s how easy blogging is when you think about it. I’m pretty confident though (maybe).

Now, this is the ‘low tide needed right now’ section and guess what? It sort of was, but not quite. It was coming in and like my Bells Beach walk I was now wading constantly, but nervously as I was carrying the DSLR. Falling over was not an option right now. Actually, is it ever the option? 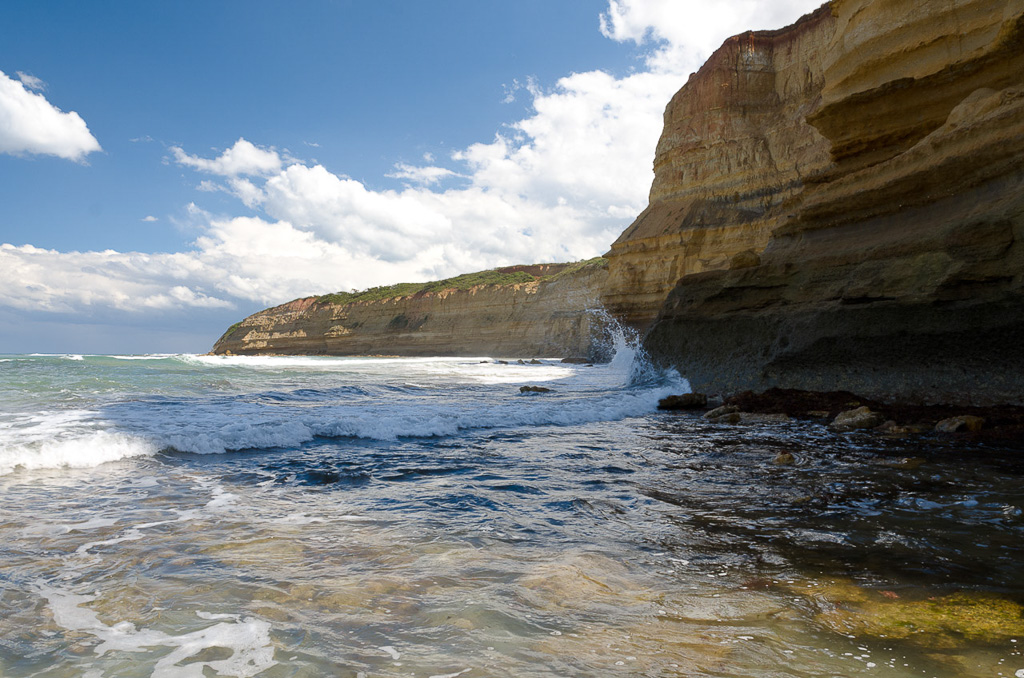 The way ahead is officially wet

Looking ahead I could see a set of stairs leading down from the top of the cliff, but there seemed to be a fair bit of damp walking to get to that spot. What intrigued me is there was someone ahead of me standing in the water. Even weirder is he was wearing my clothes and happened to have my head as well. 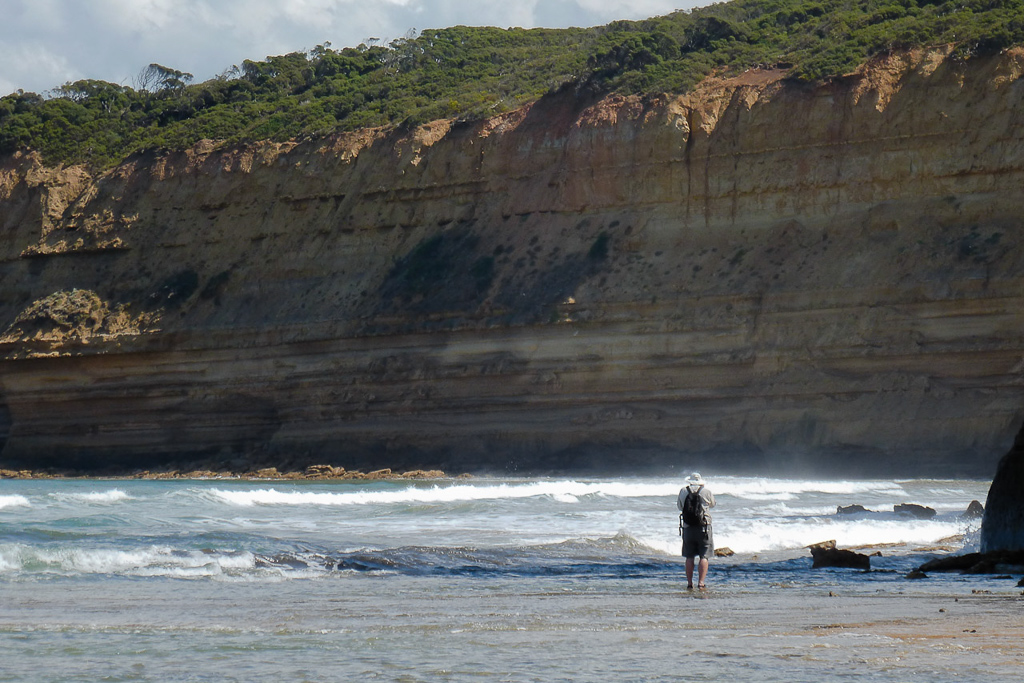 As a result of what lay ahead, I decided to wimp it and return to Jan Juc beach and climb up to the top of the cliff and continue the walk from above. It was time to backtrack whilst being joined by some random dog that appeared. 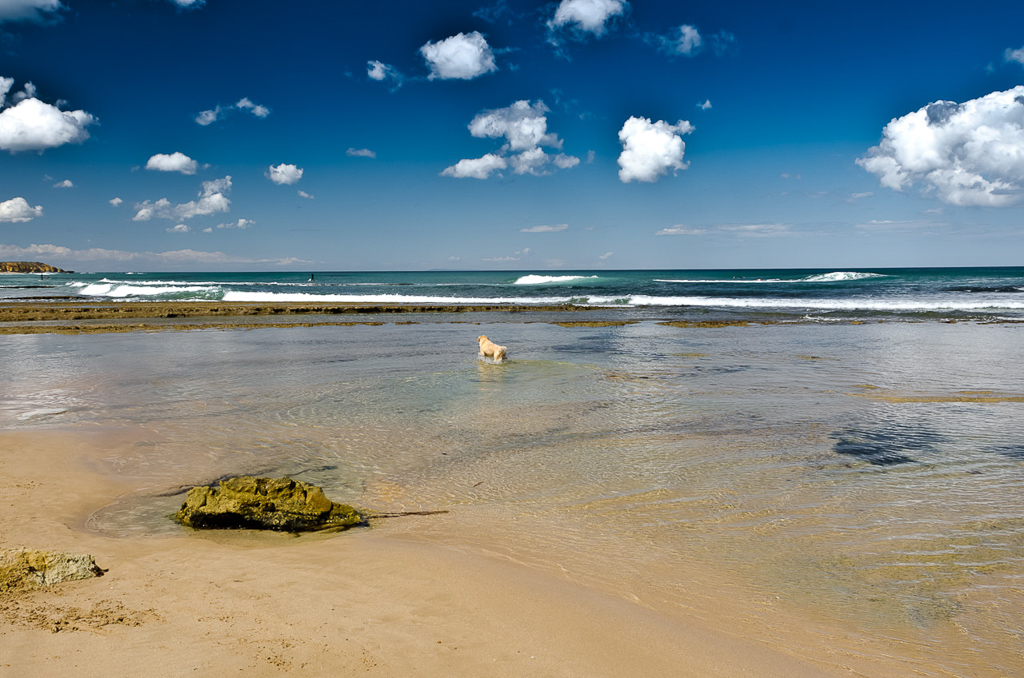 Heading back to Jan Juc beach

I wandered back and whilst doing so had a closer look at Bird Rock. Yep, it’s not looking any more bird-like on second inspection… 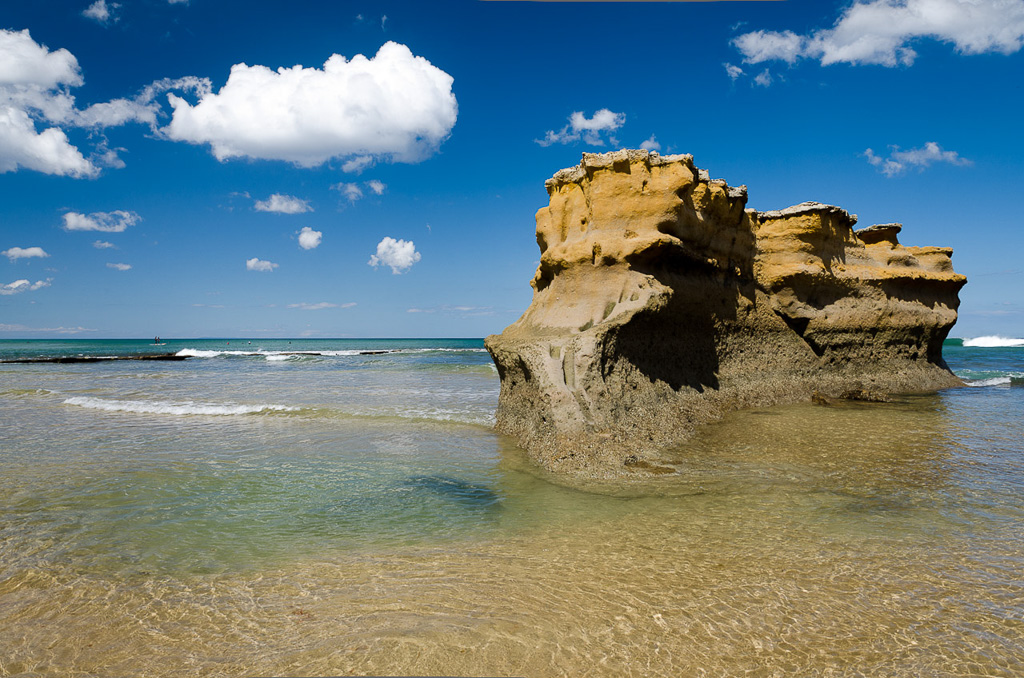 …and back to Jan Juc beach. 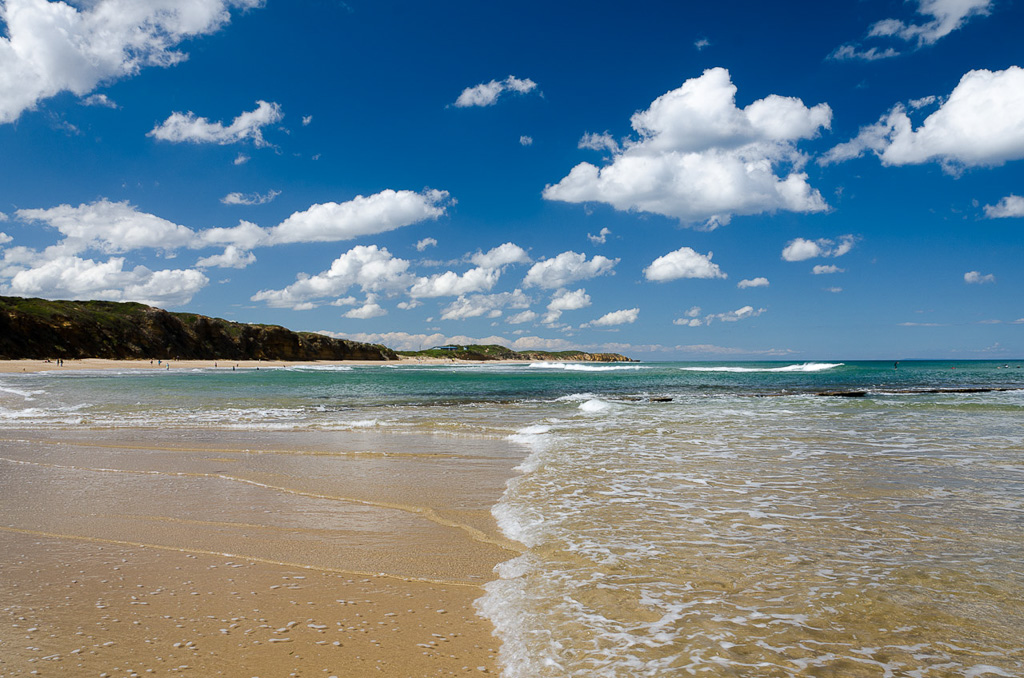 I now had to put some work in by climbing a set of stairs and for the rest of the walk it would be from the top of the cliffs. Once up there are some nice views of Jan Juc beach. 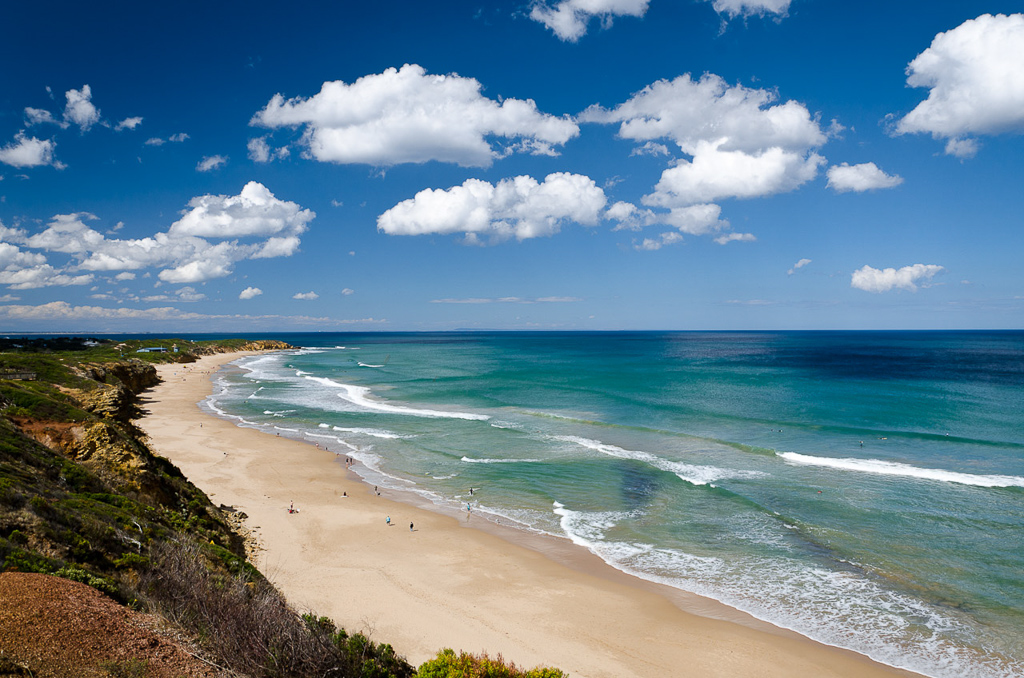 The walk is now extremely comfortable on a nice wide path with plenty of lookouts along the way. At one of these spots I noticed a couple of ladybird bugs and I assume one of three things was happening. They were either indulging in a bit of rumpy-pumpy, playing piggyback or one was injured and was being carried to an aid station. They’re all pretty valid options. 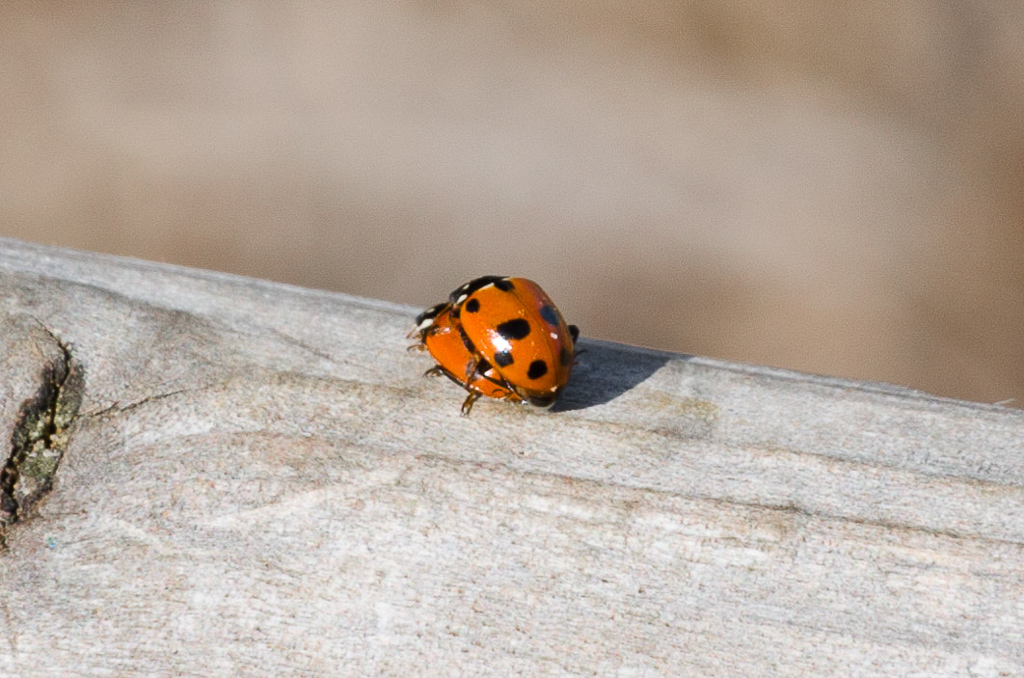 The stroll continued until another set of stairs was reached leading down to a rock shelf known as ‘Boobs Reef’. I asked the resident surfer at work, Tommy T-Bone, where the name ‘Boobs Reef’ comes from and he just shrugged his shoulders and said, “I’ve no idea and no one knows.” So, there you go. It’s another one of those ancient mysteries such as the origin of the universe and Donald Trump’s hair. I walked down the stairs which happened to be the ones I’d spotted across the water a little bit earlier. What intrigued me though is they appeared to have been designed by Rubik. 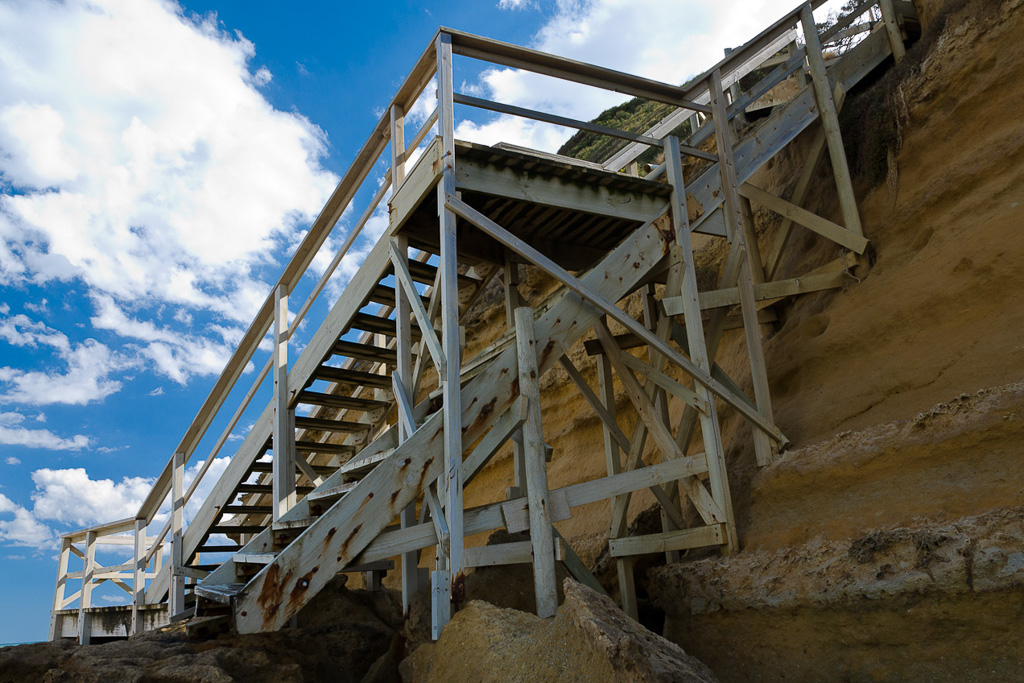 There were some nice views of the cliffs along the coastline, but I always feel a little edgy in places like this when looking at car sized boulders that have fallen from the cliffs above. I can imagine one of them on the noggin would be quite painful. 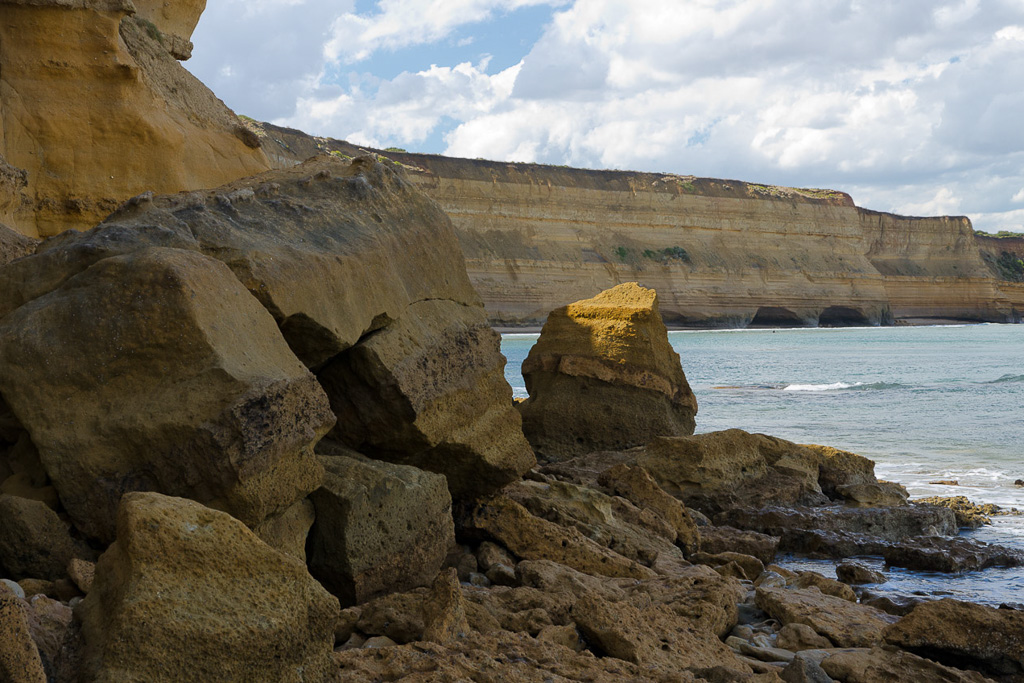 The water was well and truly lapping against the cliff now and I really should come back one day and try and do the entire walk at sea level. Then again, with so many walks on the schedule it’s hard to come back again sometimes.

So, I headed back up to the top and continued on the path whose official name is the ‘Surf Coast Trail’ whilst getting close to Bells Beach. Although I managed to avoid people appearing in my photos, it was quite busy with joggers, bikes and middle aged men without shirts on with their man-cans on display cruising by. 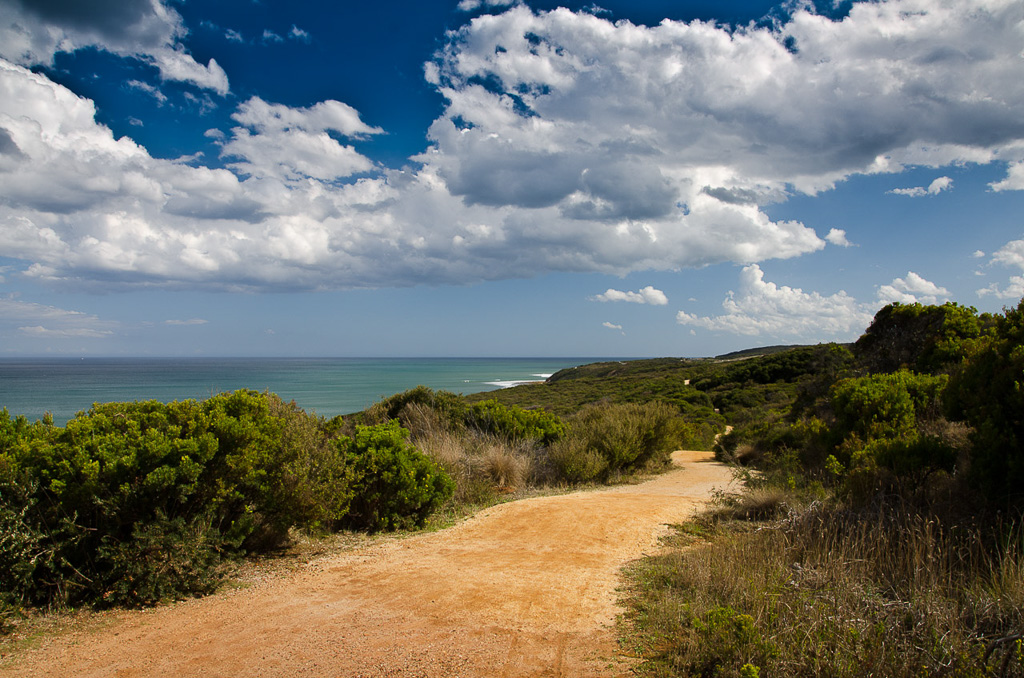 A bit more walking and I reached Bells Beach. I was going to include some photos of it, but they’re remarkably similar to the ones I’d posted in the Bells post, so I’ll give it a miss.

Next to Bells Beach is another surf spot called Winki Pop and a photo of that is at the top of this post. I again asked Tommy T-Bone where the name Winki Pop comes from and guess what his answer was? Yep, it was, “I’ve no idea, but we spell Winki Pop as two words down here whereas in Sydney it’s one word.” So, there you go, I had no idea there was another one in New South Wales, but it’s double the pop in Victoria.

It was now time to casually head back to the starting point, but just as I started strolling a woman with a monstrous dog mentioned to me, “Did you see the echidna? It was right next to the track, but my dog scared it off”. Mm… Okay. I did sneak up, but the spiky mammal was already hiding, so I got one photo before he vanished into the bushes. 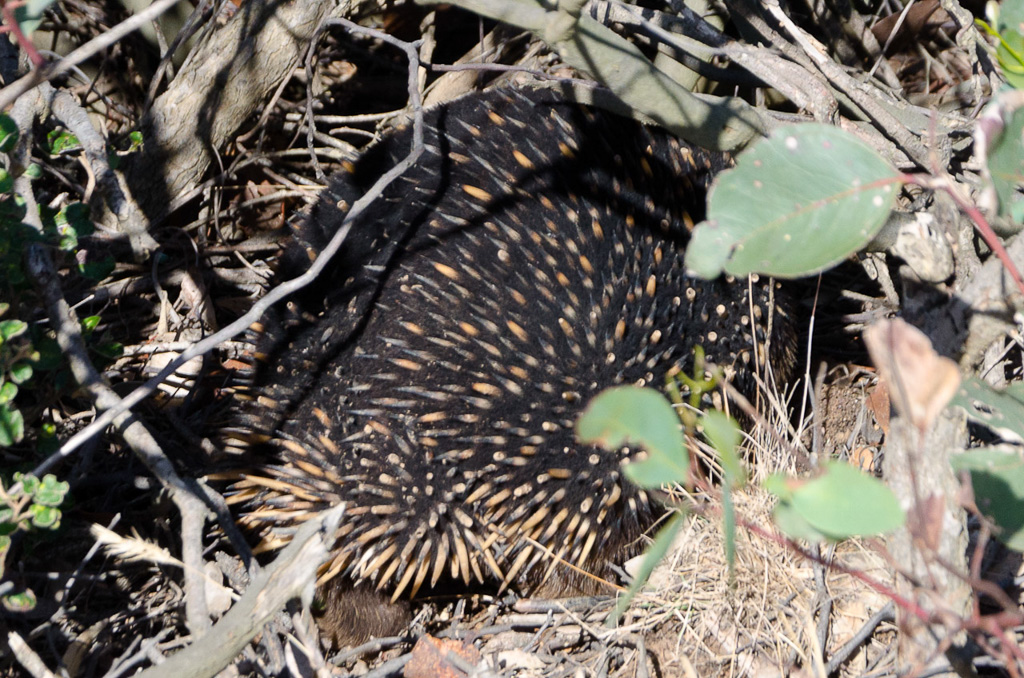 I began to follow the cliff path back to Torquay, but I became a little concerned when the sky out to sea took on a decidedly black look. There was certainly rain about which I was hoping to outrun, although a ship out to sea wasn’t looking so lucky. 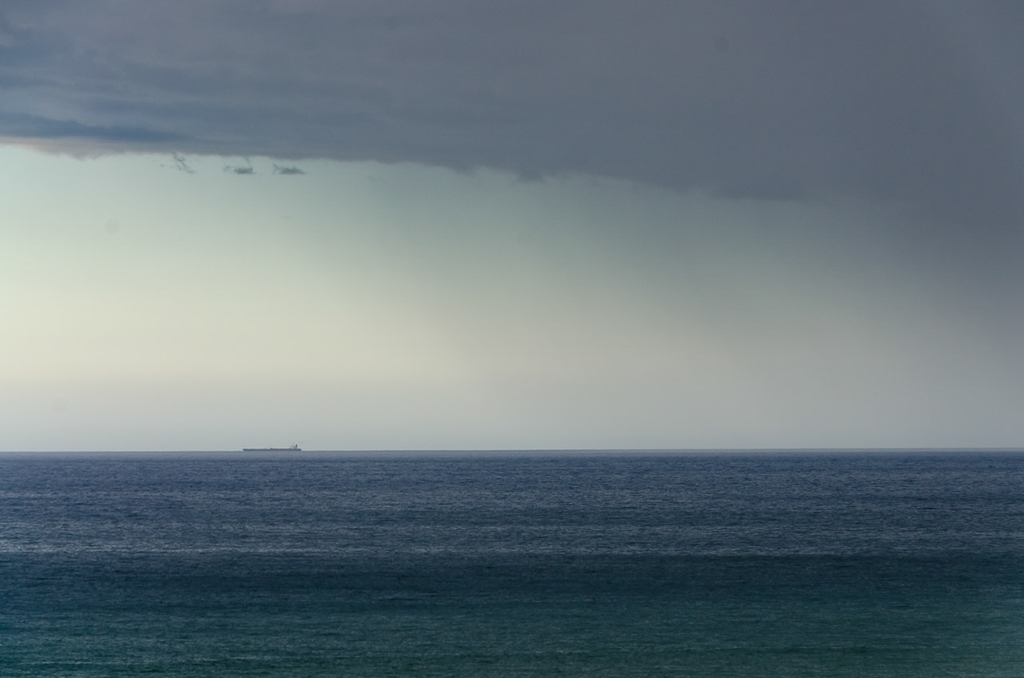 I continued on with the menacing clouds drifting closer to the coast, but I was well on my way back by now. 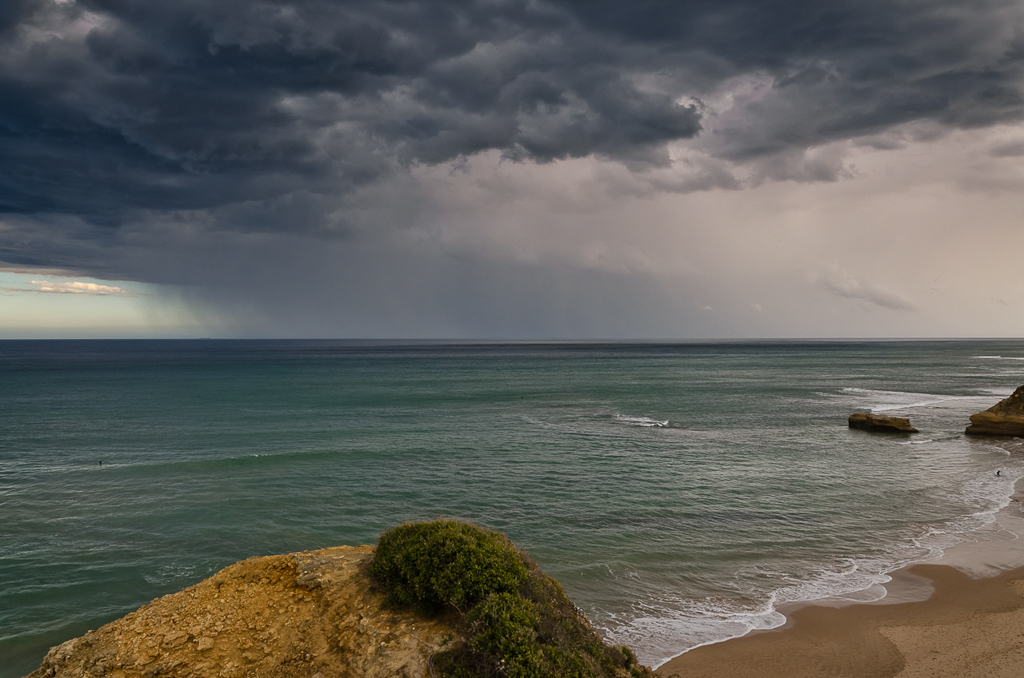 Upon returning to the lookouts above Jan Juc beach the setting sun was creating a nice reflection off the water. It must be a popular spot as there were a few photographers around with their cameras set up on tripods awaiting what I assume was the sunset. Again, I might have to come back one day just to do that as the coast line is pretty spectacular. 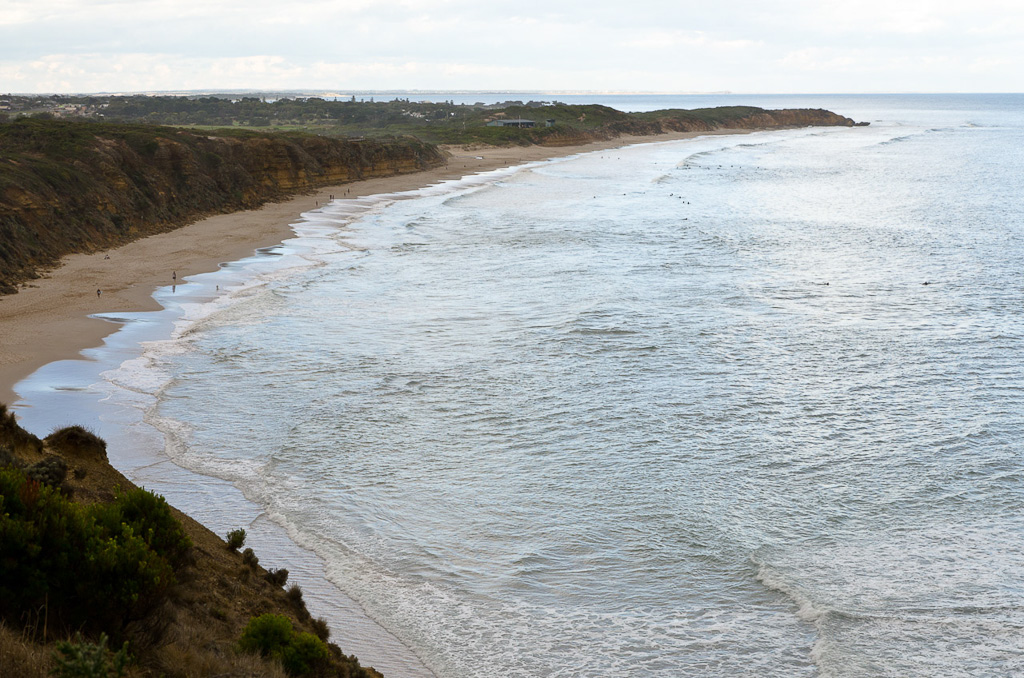 You know what? You can’t just have endless nature shots as the setting sun really made this power pole shine with the dark clouds behind it. Mm… It might look better in black and white, but when I did, it looked exactly the same as in colour! 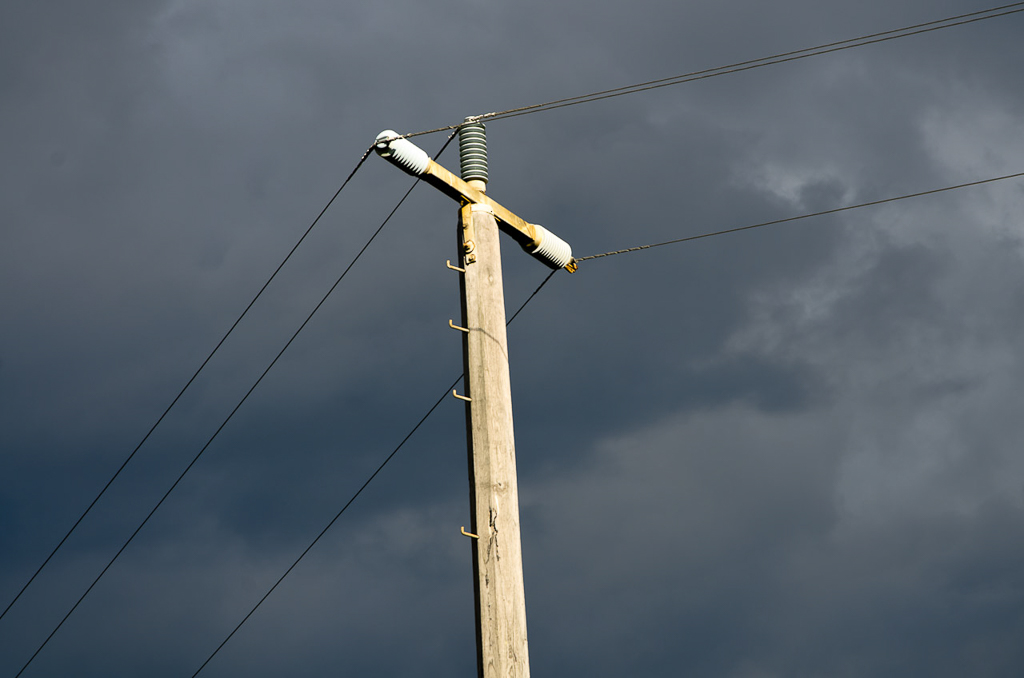 Some final strolling and the car was back in sight and I survived without getting wet. I needn’t have worried in the end as the rain continued to hug the coast line, but didn’t actually rain over land. Oh well. This was an easy walk, but everyone needs to do one of these at times. I took the GPS and in the wash-up it revealed the distance was only 12.14 km and total elevation climbed a casual 184 metres. I love these coastal walks!

What’s next? Well, Smuffin has recovered from his cooking injury and I’m trying to recruit him for a ‘longish’ walk in May. It’s got a bit of ‘fiasco’ written all over it and even more so if I don’t get training. So, out of the bakery and onto the trail. The result of this will probably generate a few posts in the next month or so. Oh yeah, all of this walking has to fit into a night at the Forum in Melbourne to see The Brian Jonestown Massacre… 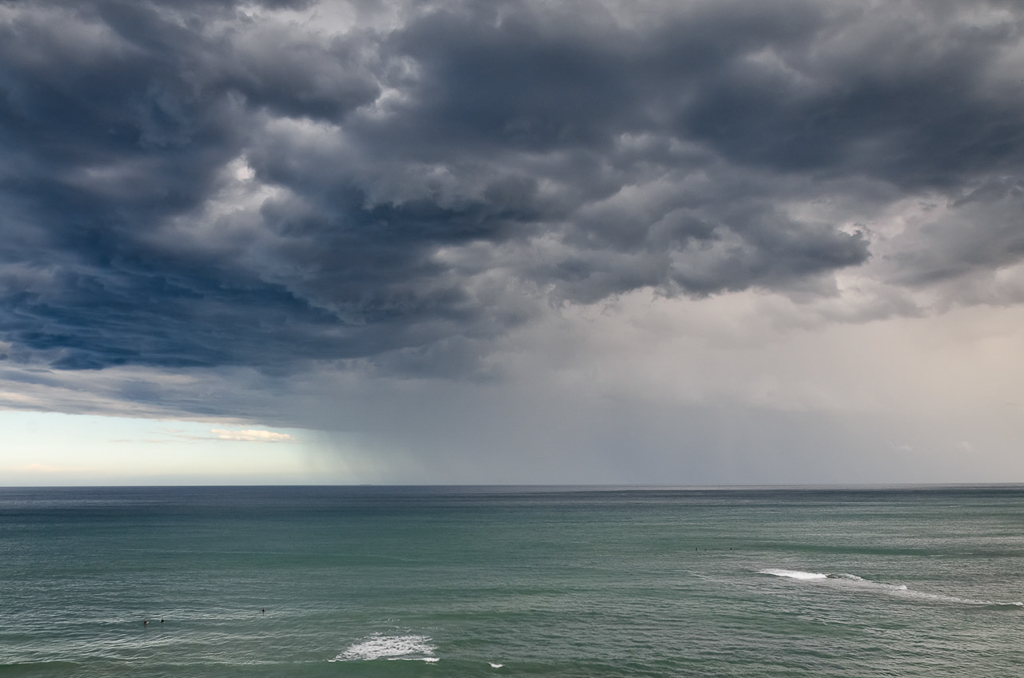