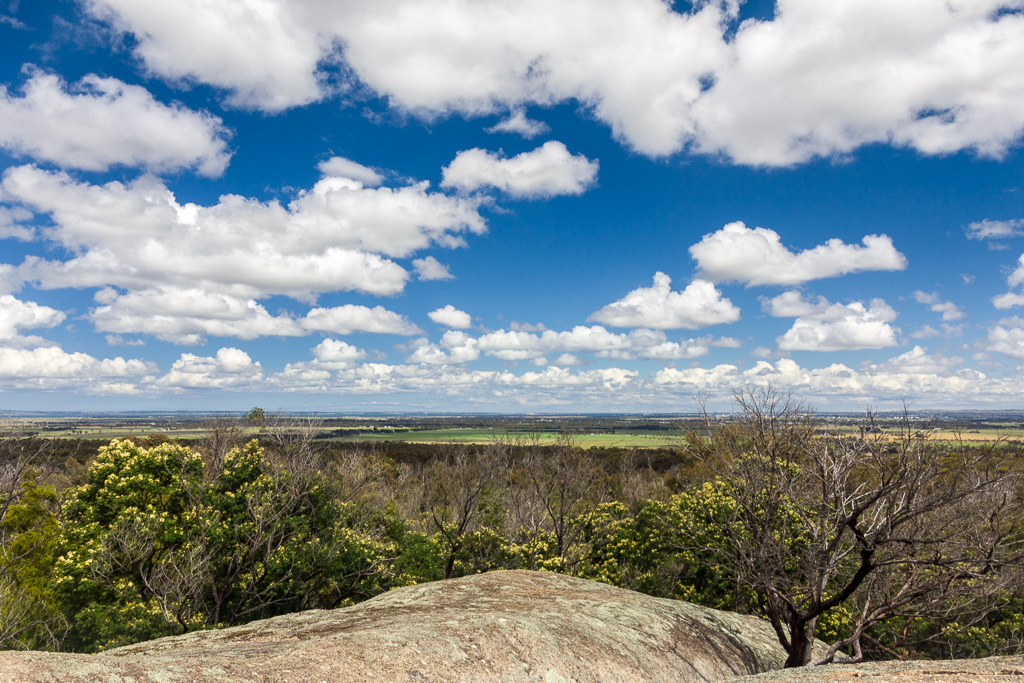 This is a ‘two for one’ combo of walks that didn’t really work out. I ended up with photos for both trips, so I might as well just post them together. It’s also a chance to do a quick entry whilst I contemplate my first overnight hike for quite some time, which hopefully will go ahead in a few weeks time.

I set out on a sunny day to do a walk down at Bells Beach near Geelong. Whilst driving I saw the turn off to Avalon Beach and thought I should do a quick detour for a bit of cinematic Mad Max reminiscing.

It was a fateful decision though, as I was hit with a sudden hay fever attack whilst at Avalon. I’m not sure if it’s the grasses of the particular area, but I ended up with the itchiest eyeballs in the history of the universe.

I wanted to take them out of their sockets, scrub them with a brillo pad and then rinse them off in acid before reinserting. I didn’t have any antihistamine tablets with me, so I was forced to call it quits. In fact, my eyes were so red from rubbing, I started to have blurred vision.

In between rubbing my eyes, I did manage to capture a bit of Mad Max ‘then and now’ stuff. Avalon is of course where Cundalini loses his hand after a poor attempt at ‘whipping a fast moving car with a chain’ trick.

Oh, you might be wondering why this is mentioned in what’s meant to be a hiking blog? Don’t ask me, ask the bloke who writes this. I’m just his stunt double.

I’ve got a few weird ideas now and again, but at least I’m not demented like a bloke I saw on the train last week. I looked down at his iPod and he was playing Phil Collins. That’s pretty crazy to start off with, but I’m positive he played ‘Sussudio’ twice. Clearly he was bonkers. 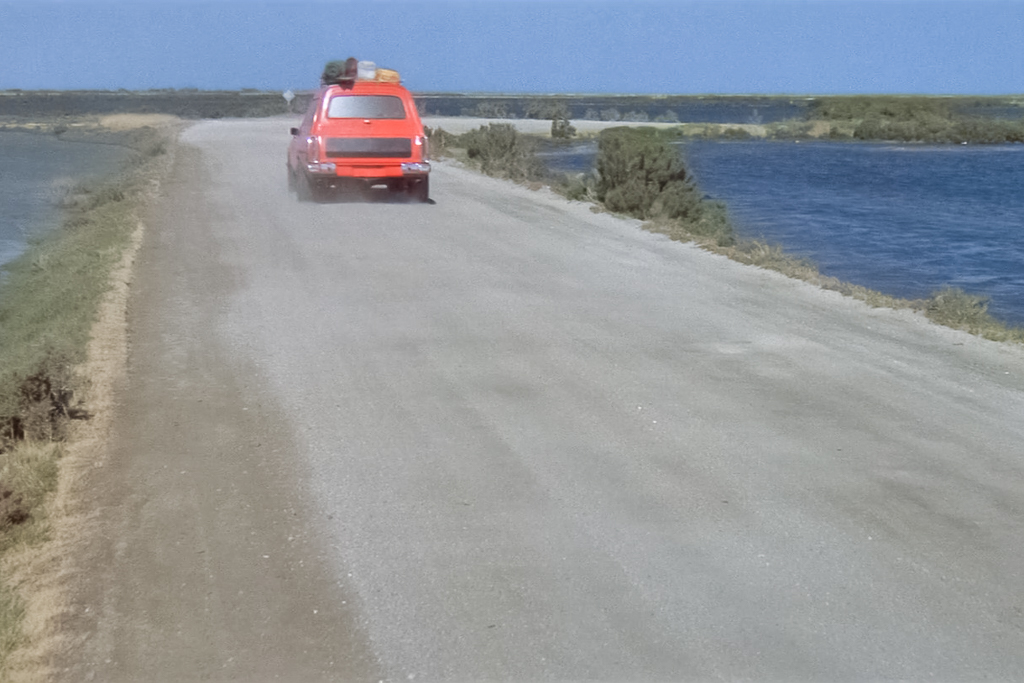 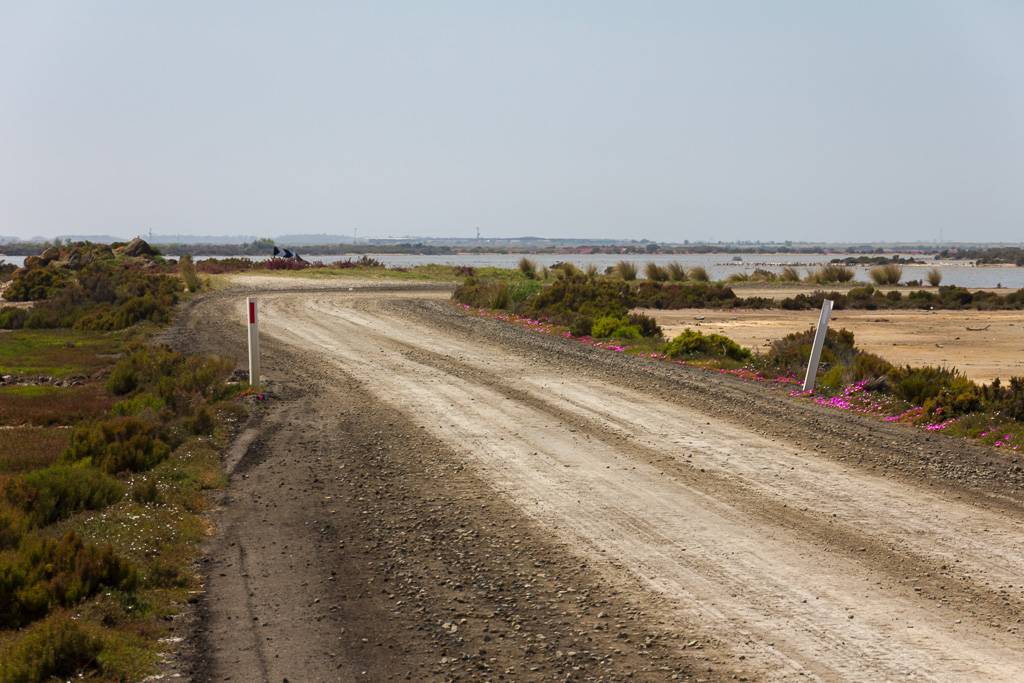 Avalon Beach is a strange area, as it looks unchanged since the 1970’s and it’s surrounded by the flattest, bleakest terrain. No wonder they filmed a post-apocalyptic movie down there. Check out some of the ‘scenery’. 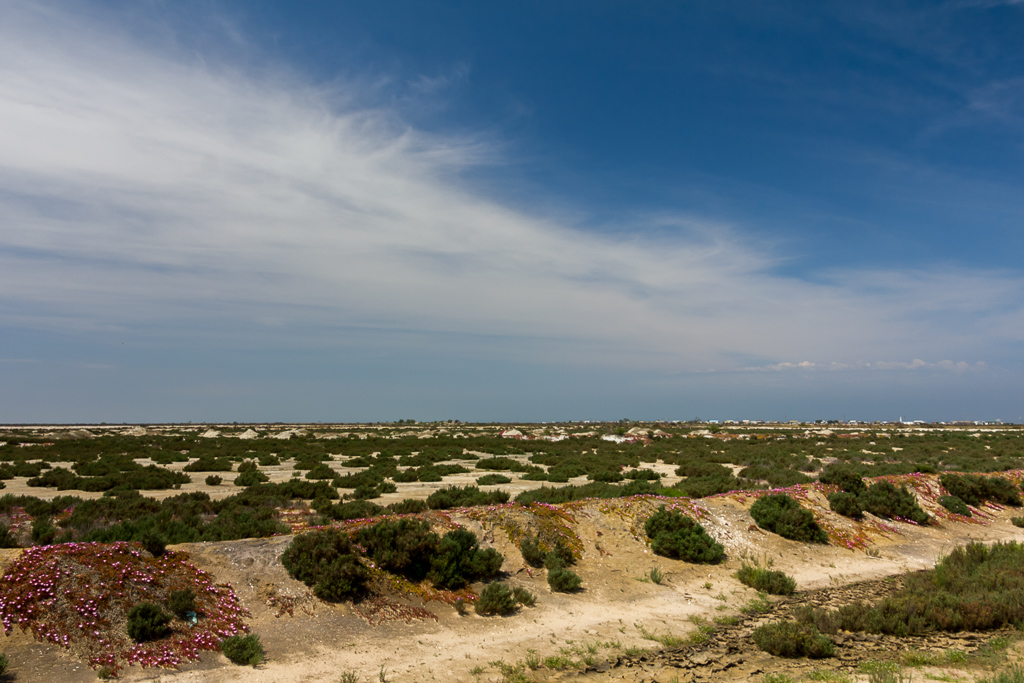 It’s as flat as a tack and I can’t say I’m interested in doing a walk through this landscape. The next photo shows one of the highlights of the area. A set of wonky power poles, which is as good as it gets for scenery. If you think this is bad, at least I’m not showing you close ups of the nearby salt mine. 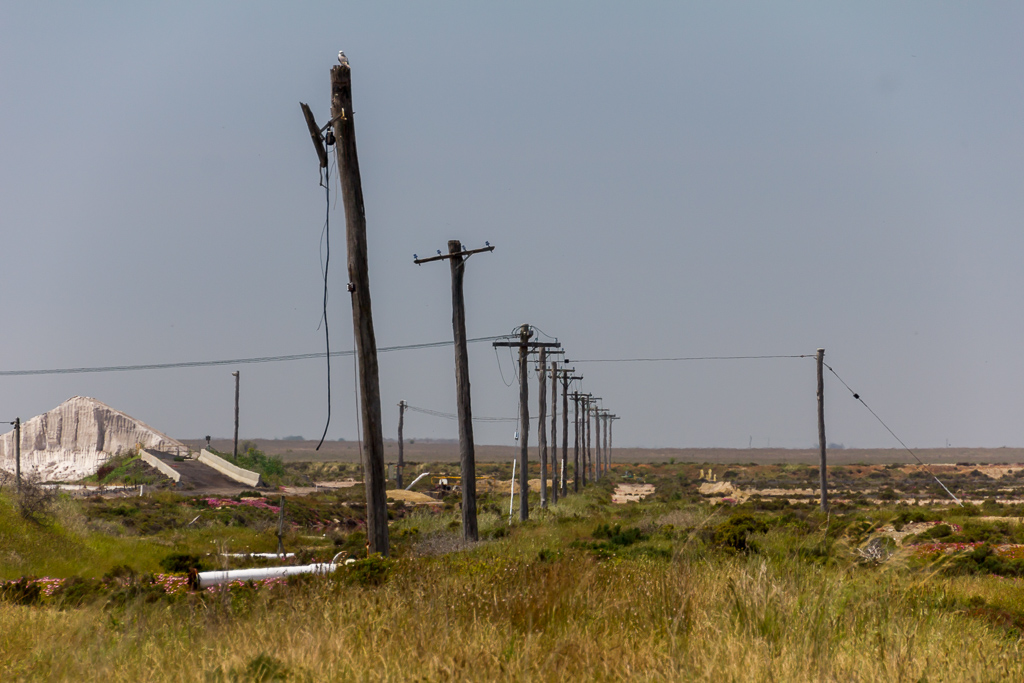 I suppose it was par for the course that a wasteland looking area should have its road signs blasted with shotguns. Guess what? It didn’t disappoint and it’s great to see the responsible use of firearms. 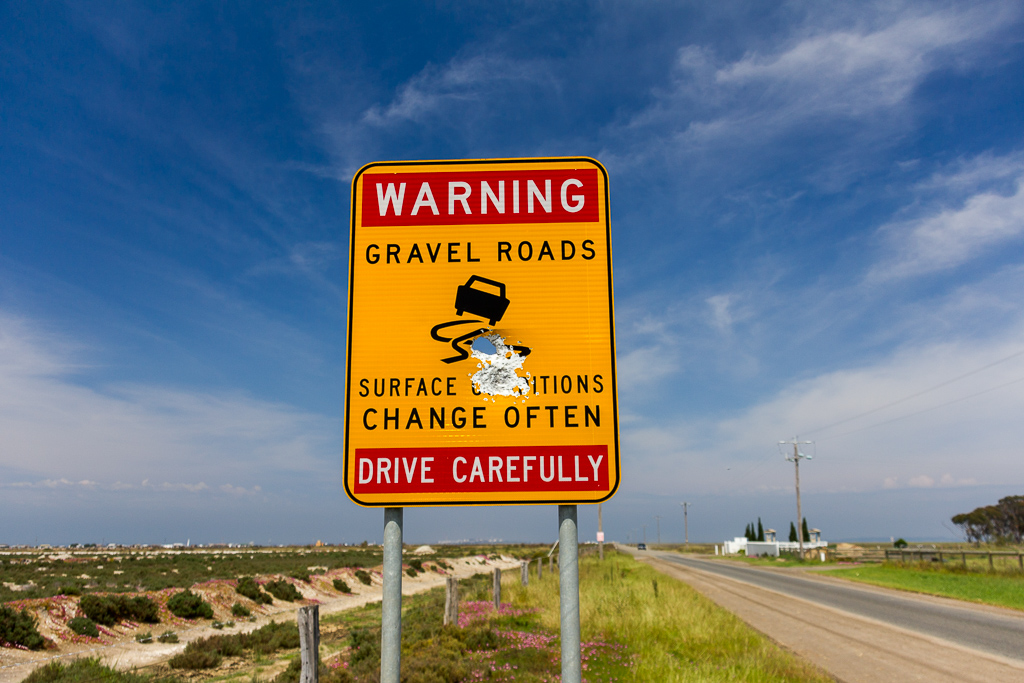 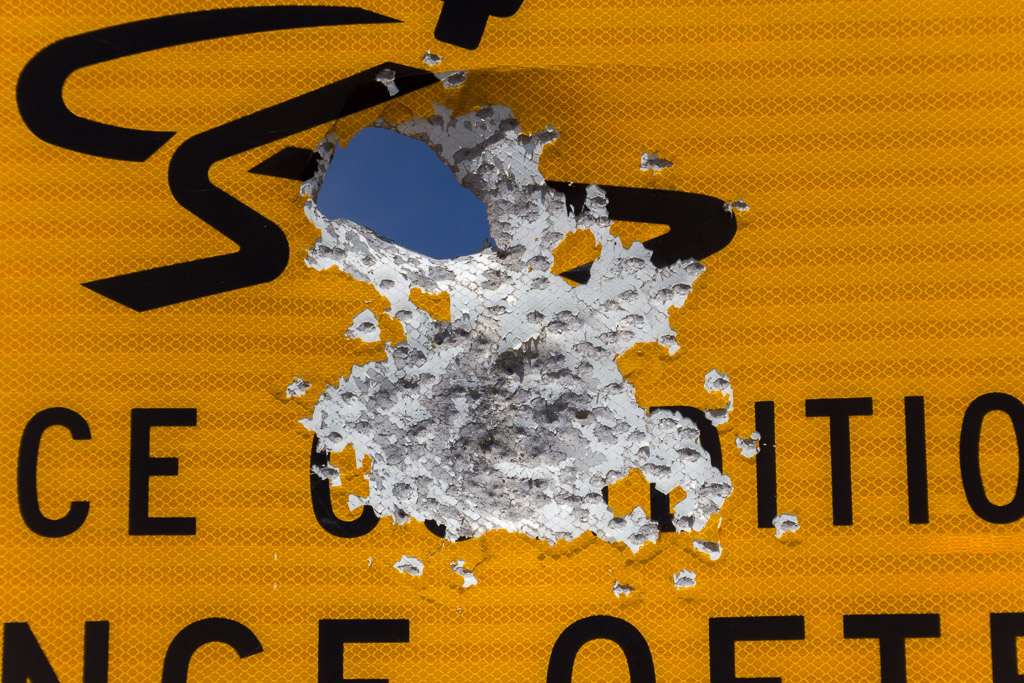 Actually, I was glad to leave the area, as it was around this time my eyeballs began developing their epic itch. 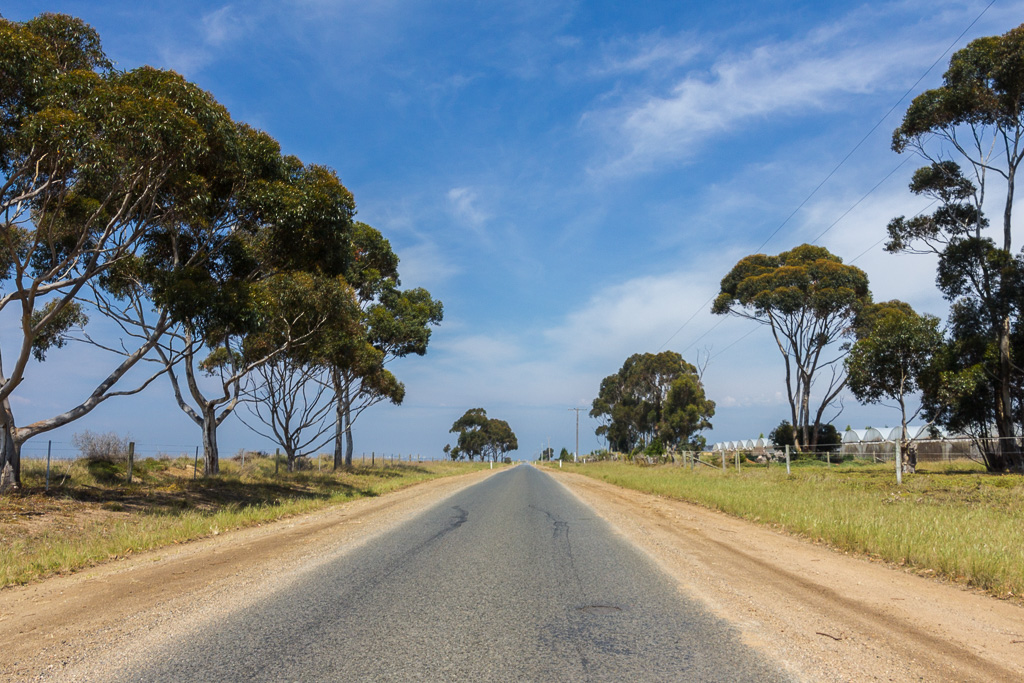 I headed home with the air conditioner on, trying to cool the balls of fire in my skull, but there was another random Mad Max location on the way back. Anyone remember this spot?

See the ruins of the building in the background? Well, things don’t change in Little River too much and this is how it looks 33 years later. 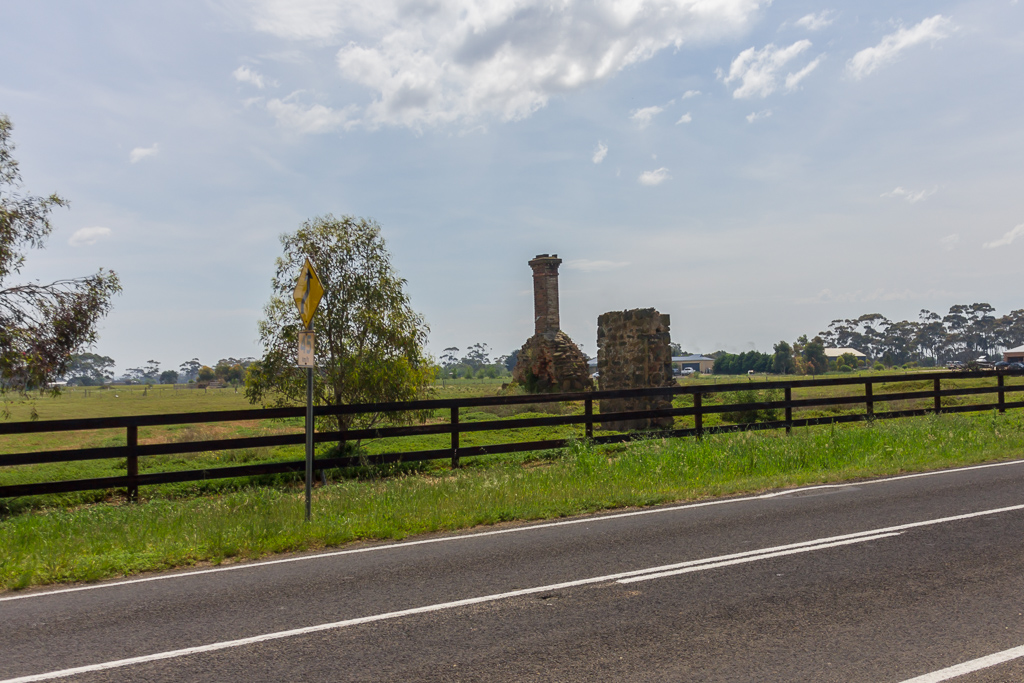 Yep, other than a few more houses around, it’s more or less identical. Whilst I put the kettle on, I’ll show you some more pictures. 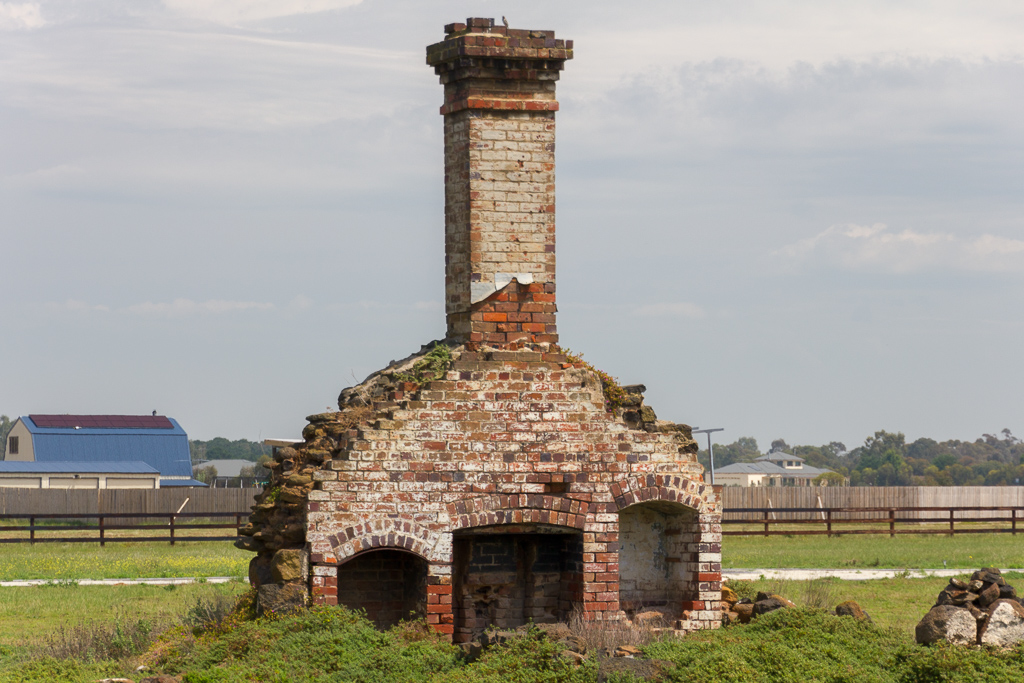 There you have it. Enjoy the crazy cinema history of Little River, which is just outside Geelong. I didn’t really want to get out of the car due to the unrelenting hayfever and on the way home I developed a 1000 yard stare.

‘If only I had some hay fever tablets’

I was glad to have some eyeball itch stoppers in my medicine chest, as they worked a treat, but that was one hell of a failed walk. I didn’t even get out of the car, which might be a new fiasco first.

Next attempt? This time it was a short day trip to the You Yangs, which are again just outside Geelong. I reckon I’ve passed them a million times, but have never stopped, so I thought it was worth having a peek.

It’s an easy drive and the walks I had in mind were only about 7 km in total, so it should have been plain sailing. The main stand out in the park is Flinders Peak, which I wanted to climb and it’s a fairly casual 364 metres high. 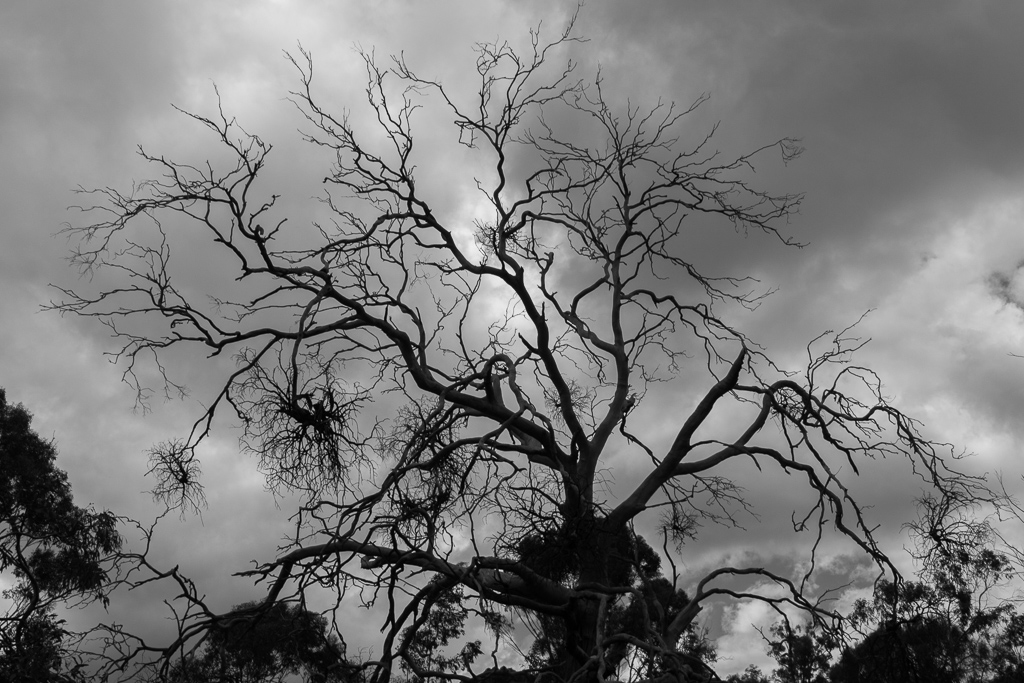 Arriving in good time, I stopped at the first car park and read the information sign for the Big Rock Walk, You Yangs Regional Park. I knew nothing about this walk, but it sounded intriguing enough, so I set off to check it out. The path is wide and flat, so I was cruising along, but I did notice the sky was quite overcast. Certainly not polariser weather at the time, so I went to unscrew it from the camera. Pretty simple huh? 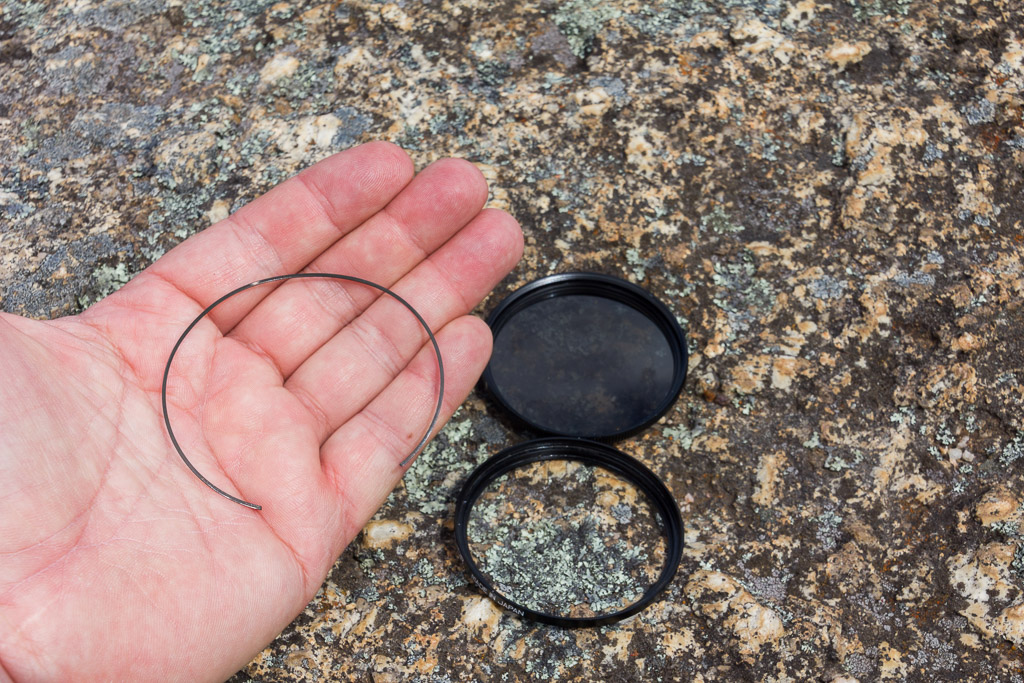 Except it wasn’t. One twist and the the entire thing fell to pieces. It’s a Hoya polariser, so it’s a respected brand, but obviously not fiasco proof. Things like this drive me nuts and although I sort of put it back together, it’s not the same and will need replacing.

It was a bummer, but it couldn’t be helped, so I moved on. I followed a slowly climbing path until gradually a ‘big rock’ appeared. 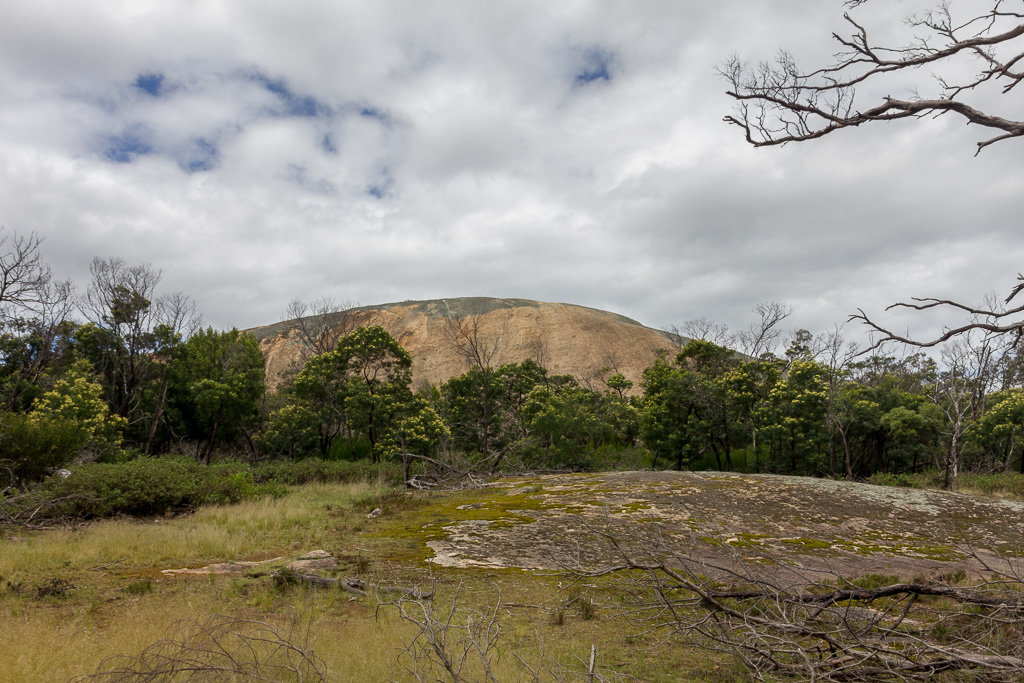 It was a lot more impressive than what I thought it was going to be. Full marks to whoever named it, as it’s quite apt and really can’t be more descriptive. One side is quite vertically sheer, but by walking to the opposite end one can easily stroll up to the flat expanse of the top and the views on a clear day are fantastic. 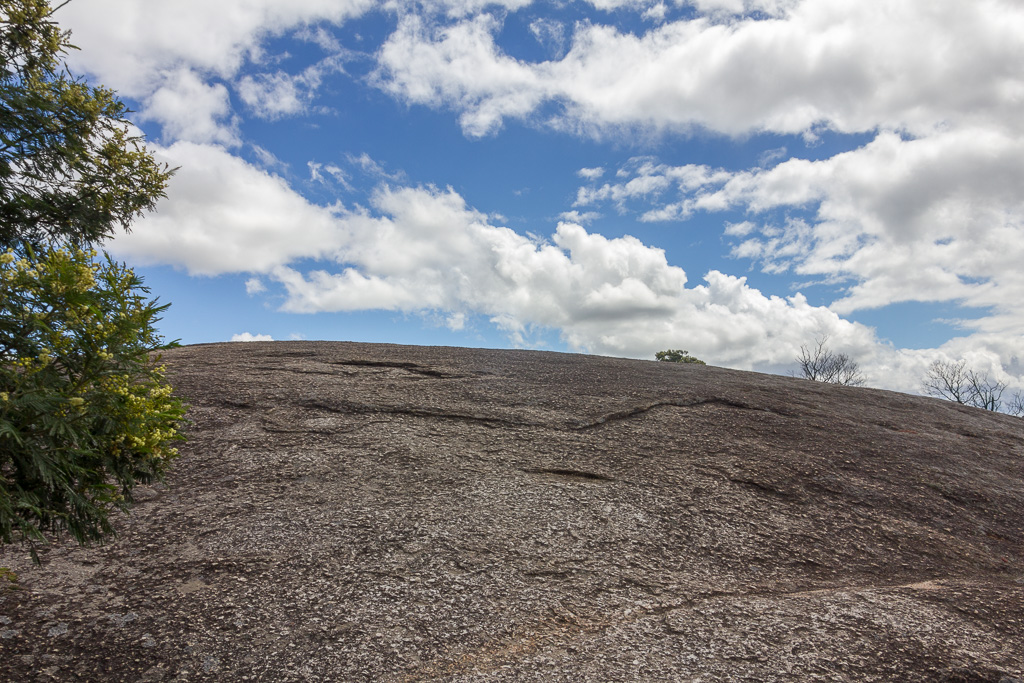 There’s a great, lone looking tree, which really stands out at the top.

It was time to sit down and enjoy the views. 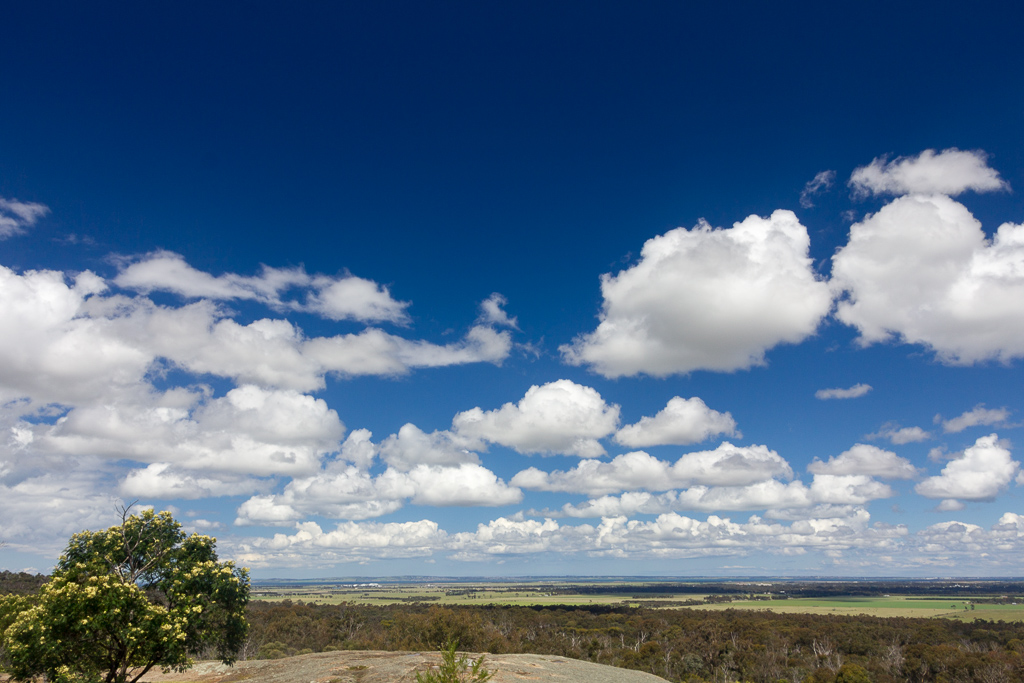 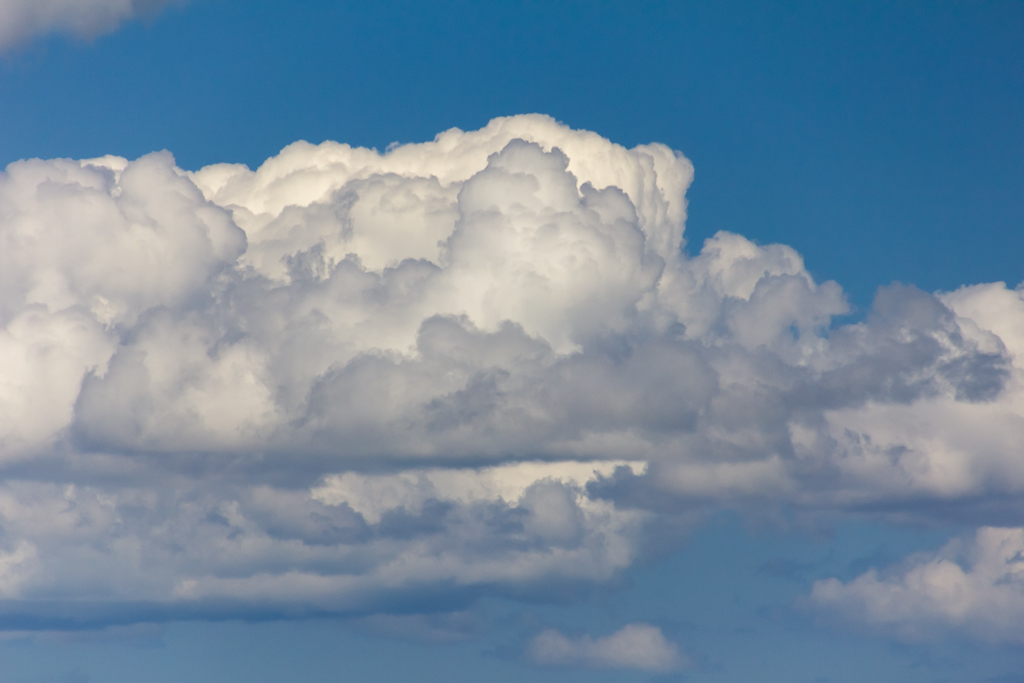 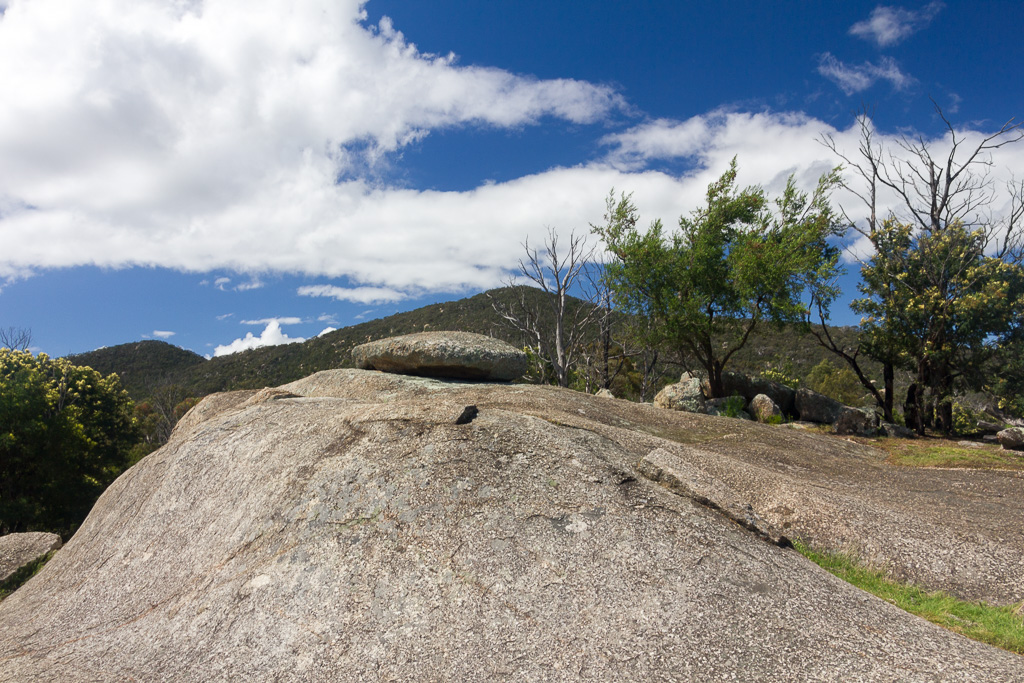 Flinders Peak in the distance

I can’t complain, as this is a great spot to lie back on the flat, warm rock and relax. The wind was a little too breezy to get really comfortable, but I still loved it. 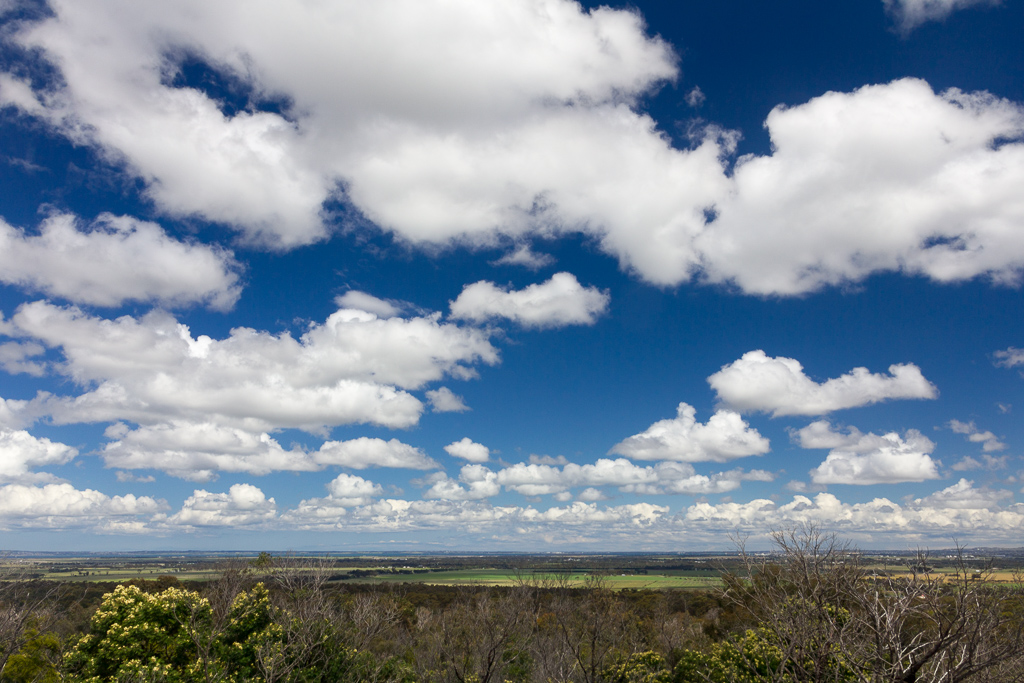 After some heat absorption from the rock, it was time to head to the main target of the day. Flinders Peak. Before heading there, I did notice an interesting sign. 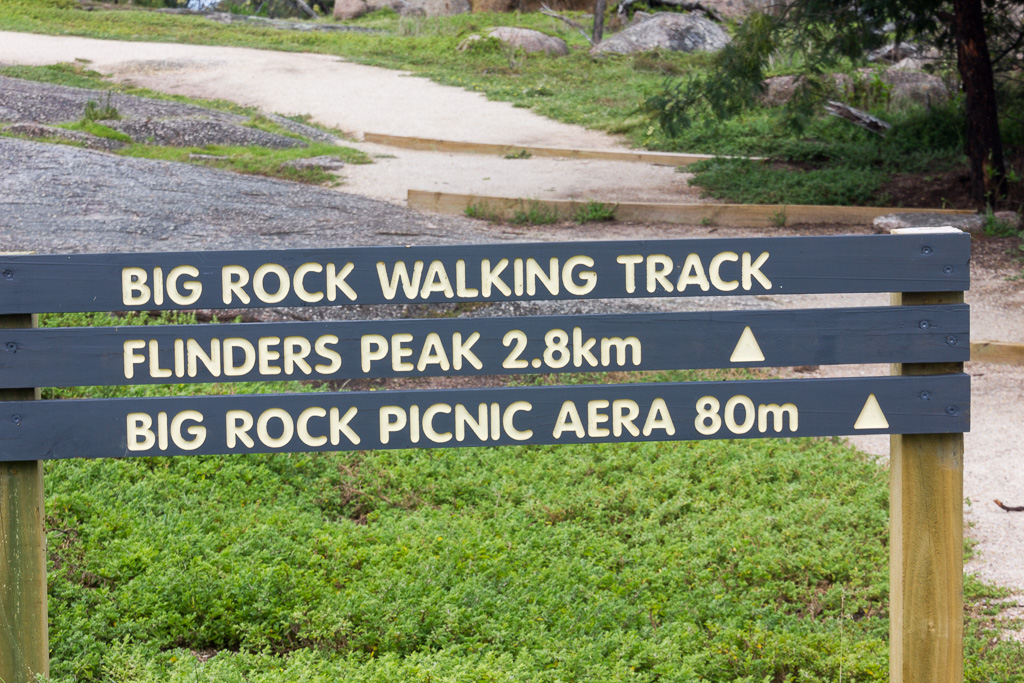 Now, I’ve seen some balls ups on signs before, but honestly, this is a good one. Who’s the clown who decided ‘area’ is spelt ‘aera’? Was there any quality control for this debacle?

After installing, did anyone wonder whether to get it corrected? I guess they’re banking on most people not noticing. The only bonus is it’s good photo for this lightweight blog entry.

Anyway, I left the aera and headed towards Flinders Peak which loomed up ahead of me. 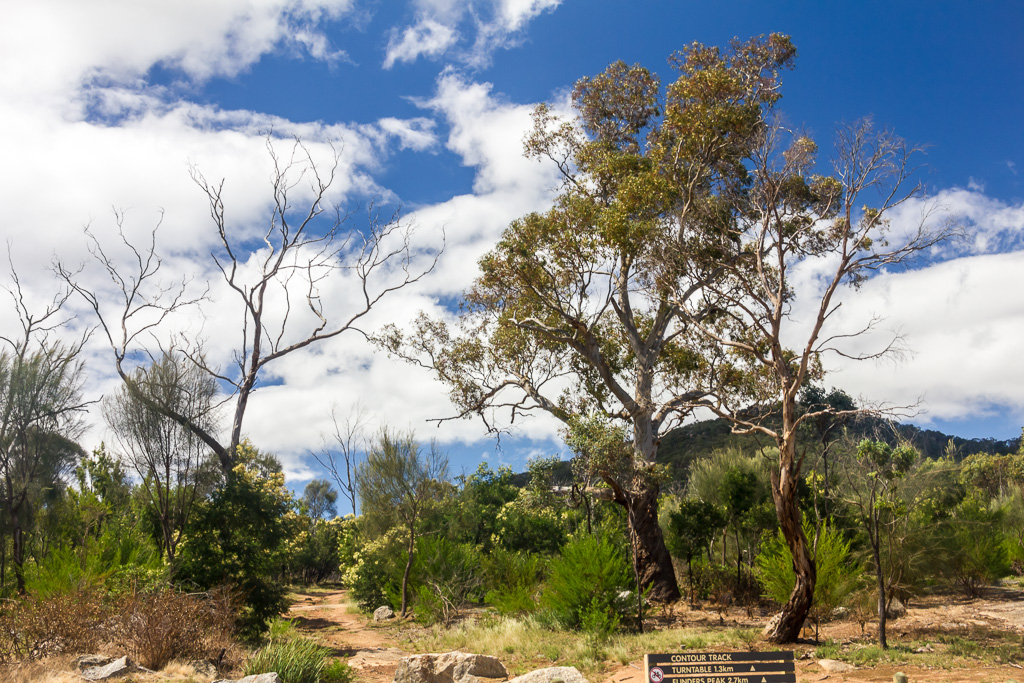 There was a dirt road to walk on, which led to the Turntable car park. Again, it was comfortable strolling. 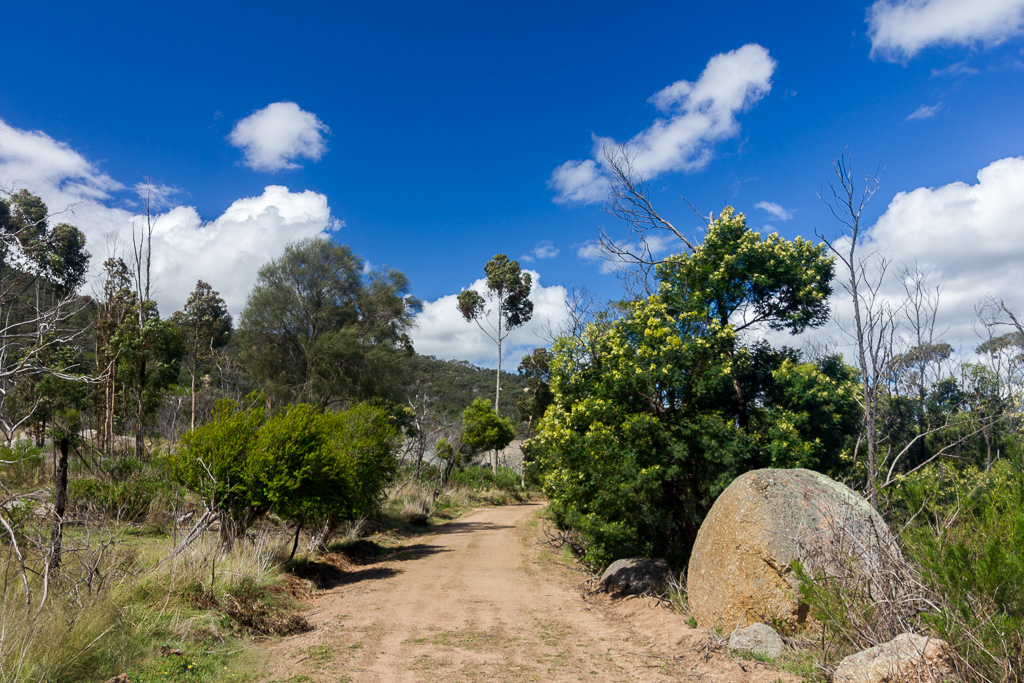 After a few kilometres the car park was reached and there was an information board nearby, which I stopped to peruse. Posted on the board was a big piece of paper, stating, ‘Flinders Peak closed due to maintenance work”.

Nooo…! It was a little frustrating, but it just means I’ll have to come back another day. Actually, I really should just ignore the signs and go ahead, as I’m sure it wouldn’t be impassable. I’m not even sure of the offence for doing so. Summary Offence only? Probably.

Well, that was it, so I started to head back to the car, but at least I spotted something interesting on the return trip. A Willie Wagtail was sitting upon a perfectly formed nest on a fallen tree near the track. I couldn’t get too close before she took off (she or he?) I ended up standing a fair way back and used the zoom lens, but even then I was still a bit too far away. Here’s a crop, which was the best I could get. 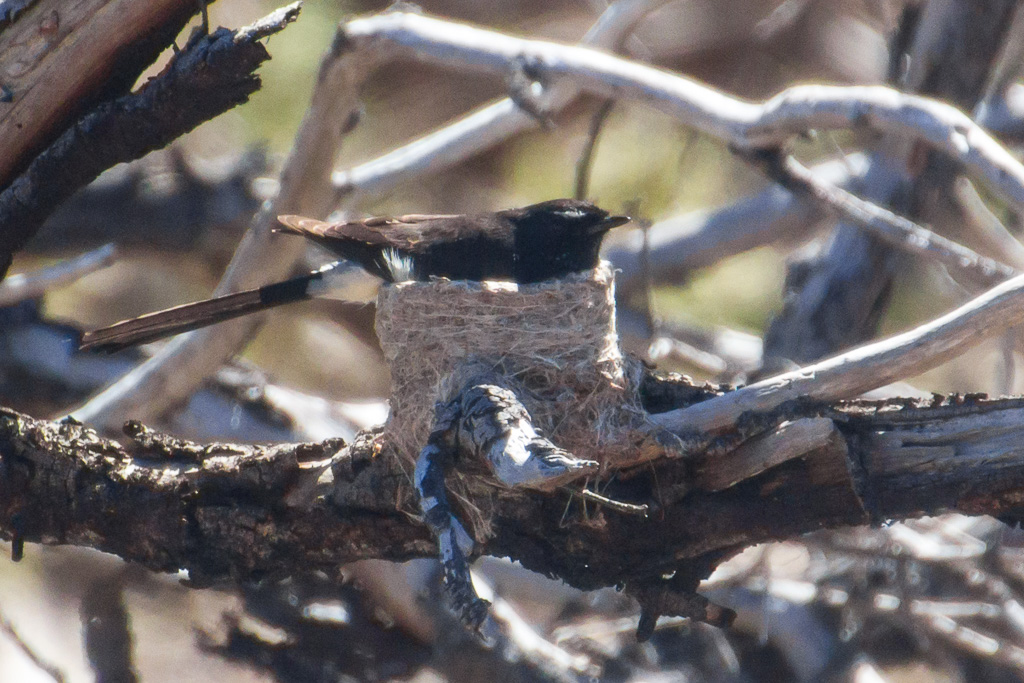 This didn’t last long before she took off again. I snuck forward a little to see what was going on in the nest and sure enough there were a couple of eggs. 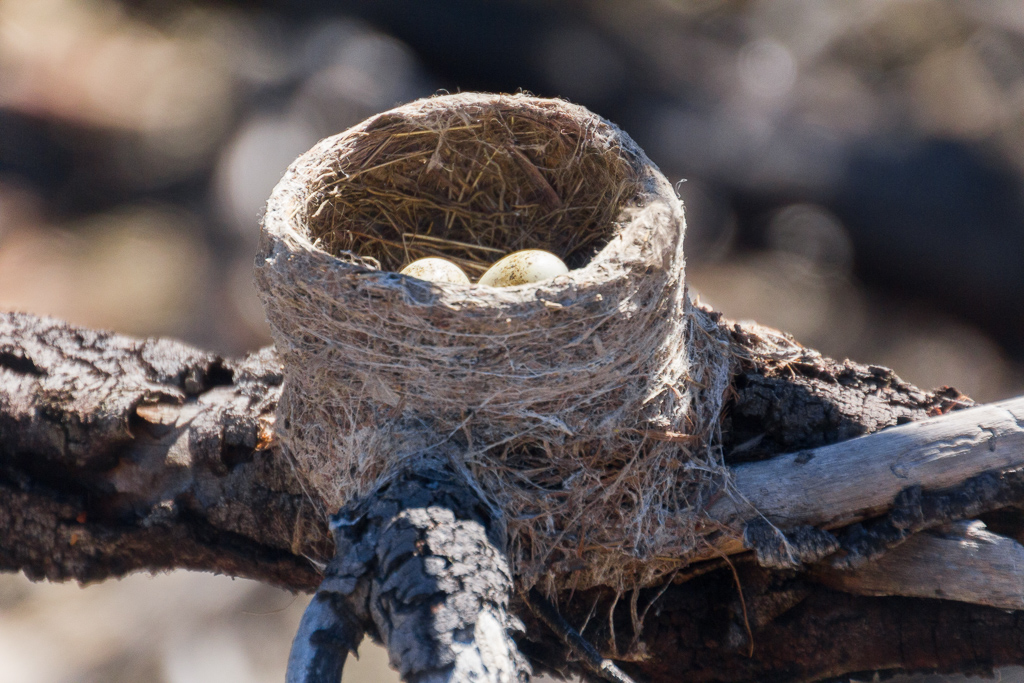 It’s certainly an impressive piece of construction. Anyway, I quickly moved on and was rapidly approaching the car park. There were some impressive trees around, which looked good through the broken polariser. 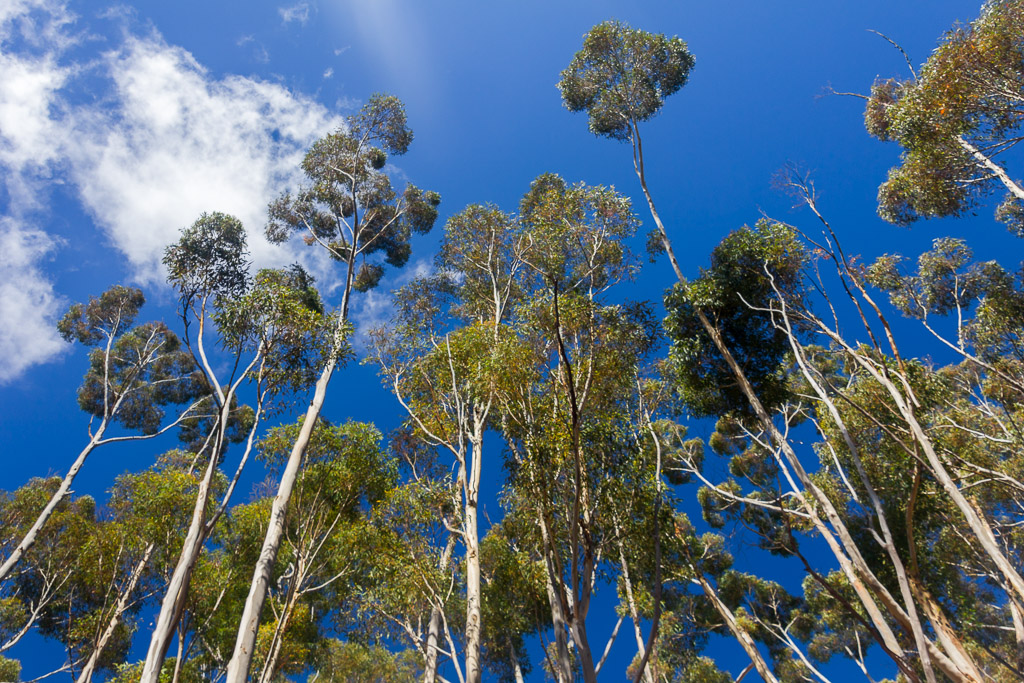 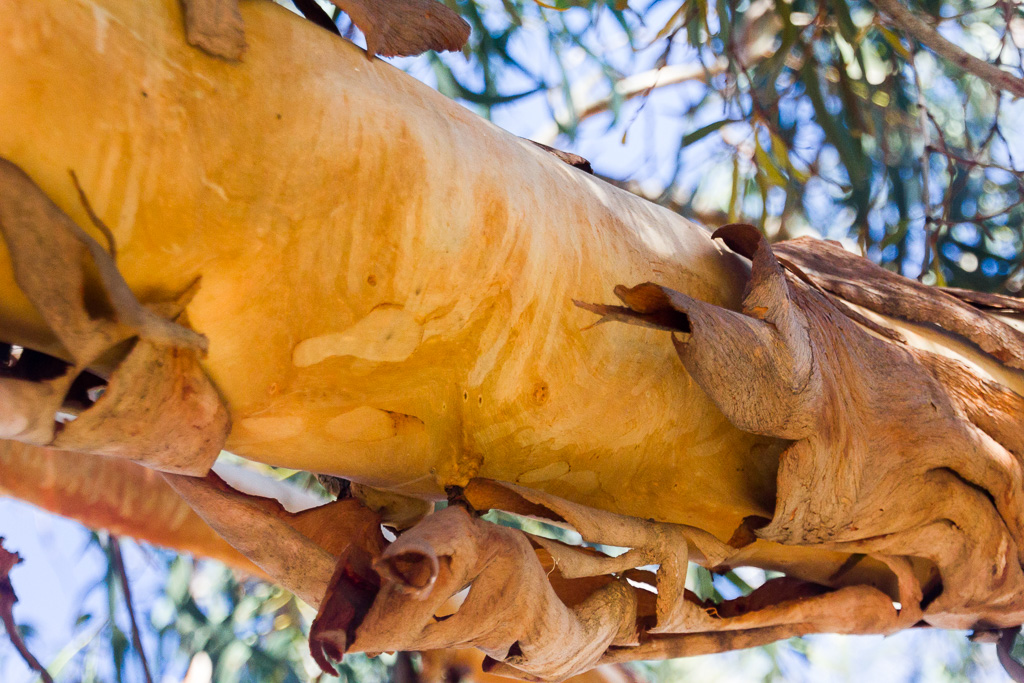 Then I was back at the car and the day was done. Not too soon either, as my eyes began flaring up again. They weren’t as bad as the Avalon trip, but bloody hell they began to get itchy. There must be something in the Geelong vicinity grasses that doesn’t agree with me, but this time at least I had some tablets on hand to knock it on the head.

That was the walk done for the day and it was short due to a failure to get up Flinders Peak. I just checked the Parks Victoria website and it says the peak will be closed until 2012. Man, they can take a long time to reopen a walk once it’s shut.

There’s a different one I want to do also, but it’s been shut for the past 12 months. I’m keeping that one up my sleeve for a covert mission, as I’ve had a gutful waiting for it to reopen. The walk I’m alluding to is a popular one as well and it features in three walking books I own, so it’s not some remote job no one ever wants to goes to. Hopefully I’ll get to it in the next month or so. 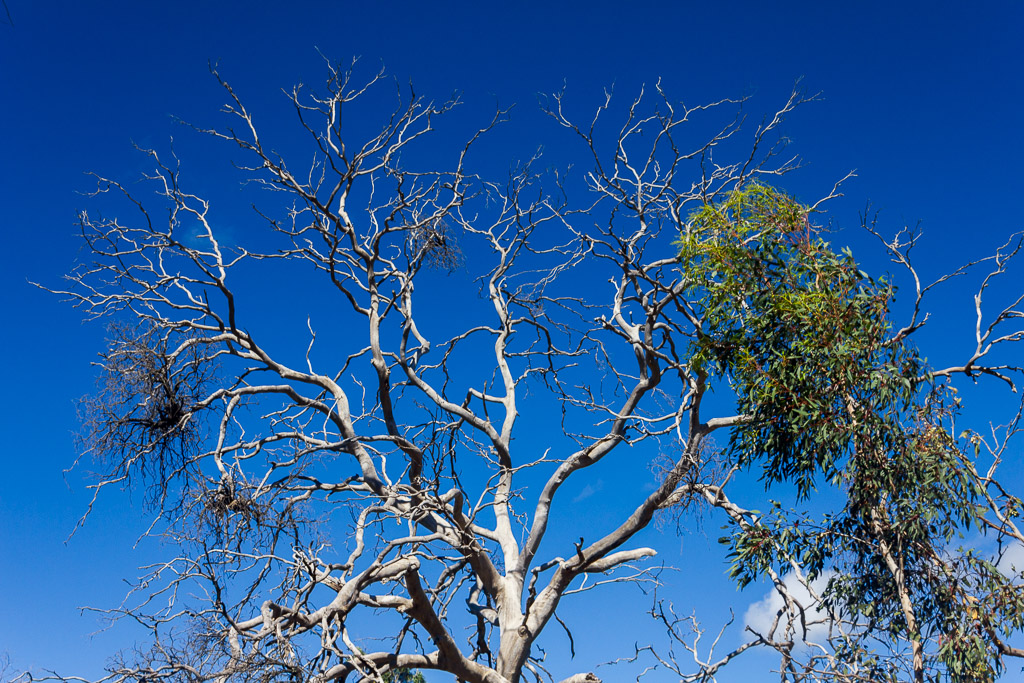 All in all, I’d only walked six kilometres, but not every walk has to be a world beater. Heading home, it was time to contemplate buying a new polariser.

I’ll sign off with another Mad Max shot. In the photo, what are the hills to the left in the background? Well, that’s easy. They’re the You Yangs.