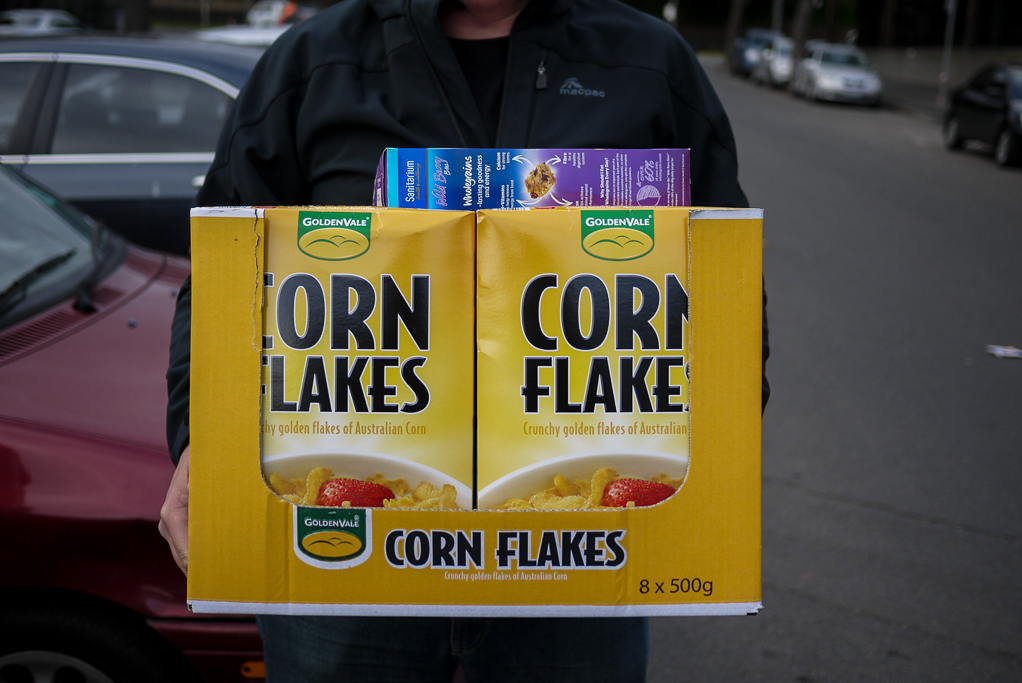 I started this blog entry a few days ago and now I’m getting into it again. I live on the edge and between polishing my extensive spoon collection this is another prime example of how to stay on top. By the way, what’s the blog entry theory? Write up an entry and wait until it’s been absorbed by the masses before another is written? Does this post now mean the Elvis wigs will be forgotten? Oh well, I need constant entries to update everyone on my wild lifestyle.

What’s going on with the Corn Flakes you may ask? Well, I’m sorry to say, but that answer is coming later. Surely you didn’t think I’d give that away so soon? Oh yeah, this is also going to be one of those entries where random photos appear, which have no relevance to what I’m talking about. I think they’re needed though for breaking up the paragraphs. A blog entry can’t survive on Corn Flakes alone, plus they’re old film photos that I’ve scanned and it’s going to be a bit of a trial and error to see how they came out. 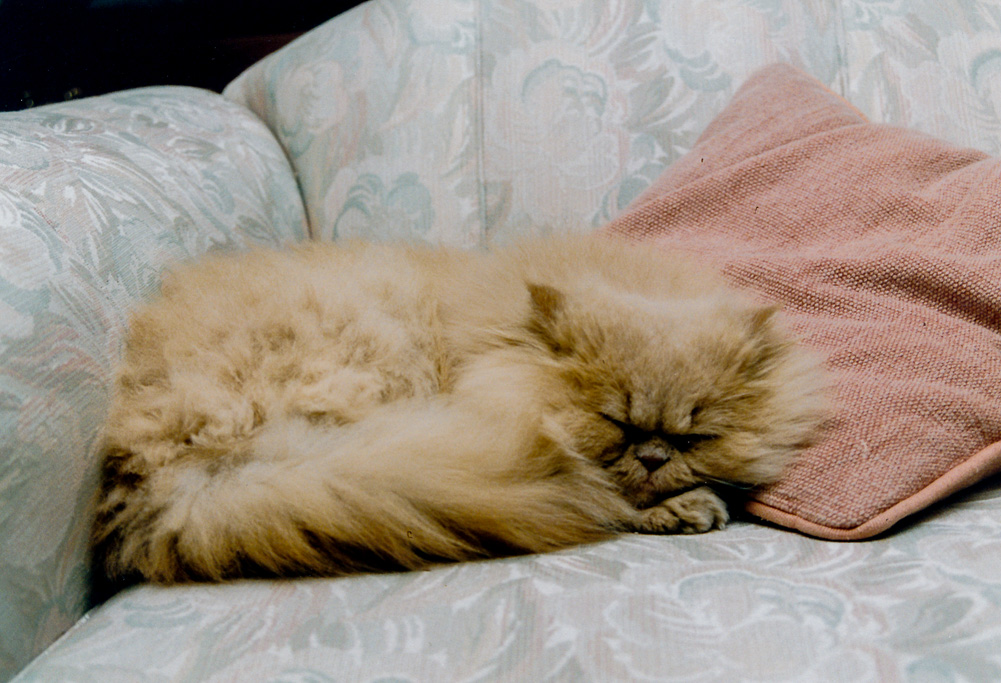 My old cat Tango who sadly has passed on.

Have you noticed lately I’ve been whining like a baby about my sore neck? I think I might have mentioned it once or twice, but just to bring you up to speed, I had an MRI which informed me there are two prolapsed discs in my neck. It’s been a little painful, especially the agony in my left arm that’s the result of some sort of nerve bashing by the bulging discs. Well, that’s the only medical terminology I can come up with right now.

Anyway, I went and saw a neurosurgeon and after viewing the MRI he said a couple of things. Firstly, “Wow, these MRI’s aren’t very good.” That was an interesting comment to get the ball rolling, seeing how I got slugged $295 to get them done. Did I get the work experience MRI bloke working that day? Then again, I did fall asleep during the procedure, so maybe my snoring made the image a little shaky. Time for a quick photo? Okay, have a look at this one and admire my wildness. 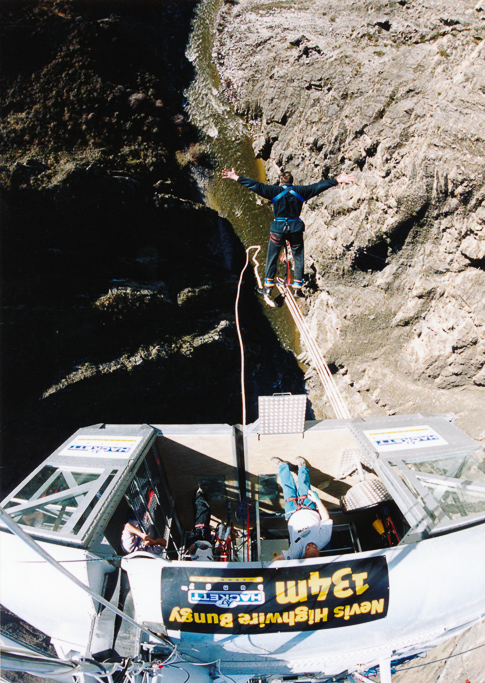 Okay, back to the neurosurgeon and after a bit of MRI complaining he then said, “Well, you must be strong to put up with over a month of pain those two significant disc protrusions would cause.”

A couple of things happened, as firstly it re-assured me I wasn’t being a complete sook about the whole thing. The other is I leaned back in my seat, ran one hand through my Elvis wig and the other through my detachable beard and replied, “Oh of course. Didn’t you realise in the worldwide hiking community I’m not called ‘Bear Mitts’ for nothing? I’m like solid teak, even within my underpants.”

He nodded in agreement whilst moving to the other side of the room. In the end he told me to go away for the week, munch on a warp factor anti-inflammatory called ‘Panafcortelone’ and then report back to see if there’s any difference. Okay, here’s another photo. 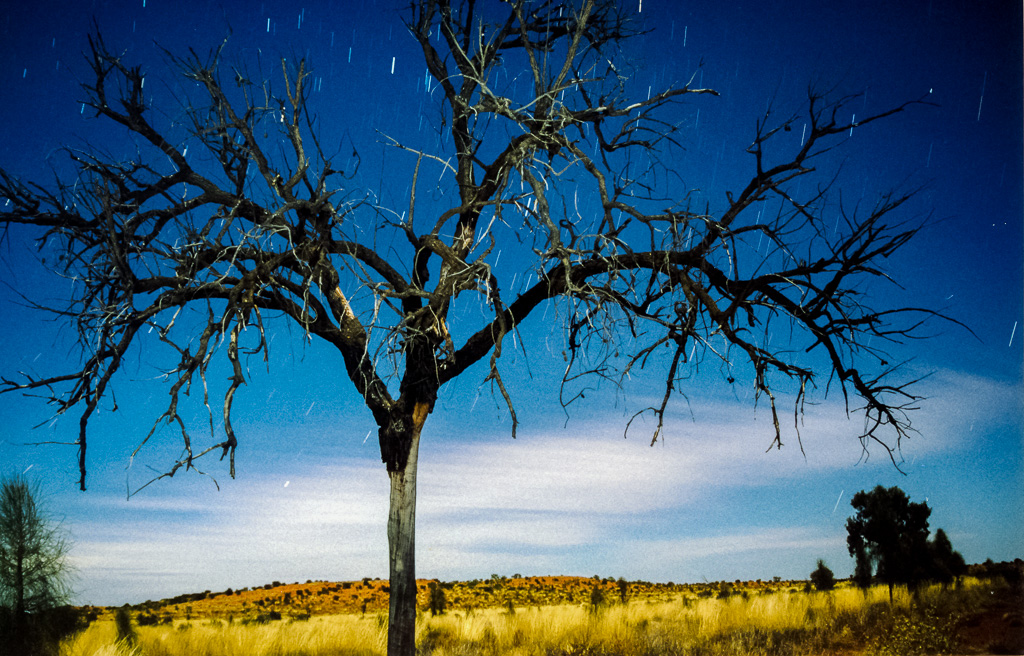 Thirty minute exposure on a windless evening in the Northern Territory. 35mm film.

After a week of medication and if there’s no improvement, then what? I guess it was always going to be a silly question to a slice and dice merchant, “Well, it’s surgery on the disc at C6 – C7. It’s not too bad a procedure with the removal of some stuff (I can’t remember the exact wording) and in about 85% of occasions it’s a success.”

Mm… I’d like odds of 95% preferably. He then went on, “Well, of course there may be some possibility of problems such as a hoarse voice.” Well, that’s not bad as I always wanted to sound like Lee Marvin, but with bricks suspended from his testicles to add a little bit of a deeper voice.

The kicker in the end was always coming and it was a bit of a throwaway line, “Now, worse things can happen though, such as ending up in a wheelchair or even death, but I’ve never seen that”. Okay, I should have clarified what he meant by ‘never seen that’ as it’s open to interpretation I think. Who knows, but I might be kicking off a new blog called ‘HikingFiascoOnWheels’. Possibly interesting? I threw in one last question though and that’s if he’s heard any good reports about Dr Dre’s medication ‘Hozac’. He replied it’s looking promising at this stage, so I might re-visit that later on. Photo please. 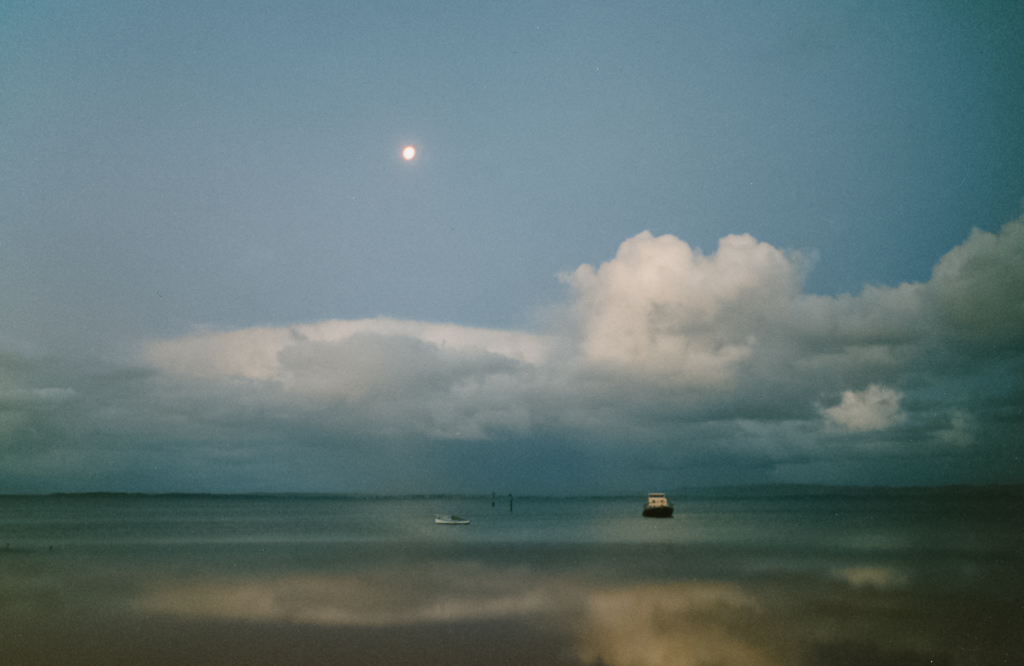 Well, that was it and I took off to get my new pills and do what any right minded person would do when medicine is prescribed and take double the dose. I can now say for the first time in a month my arm’s not hurting. I’ve been running around the house jumping up and down clicking my heels whilst smiling with the odd comment from Ben, “Can you stop blocking the TV and causing the floor to shake?”

It’s wait and see I guess, as all I’ve done is overdose, so it may not last. I did check overdose symptoms and one of them’s the condition called ‘moonface’. Apparently the head gets a little circular and as large as a pumpkin. It actually sounds quite sexy doesn’t it? 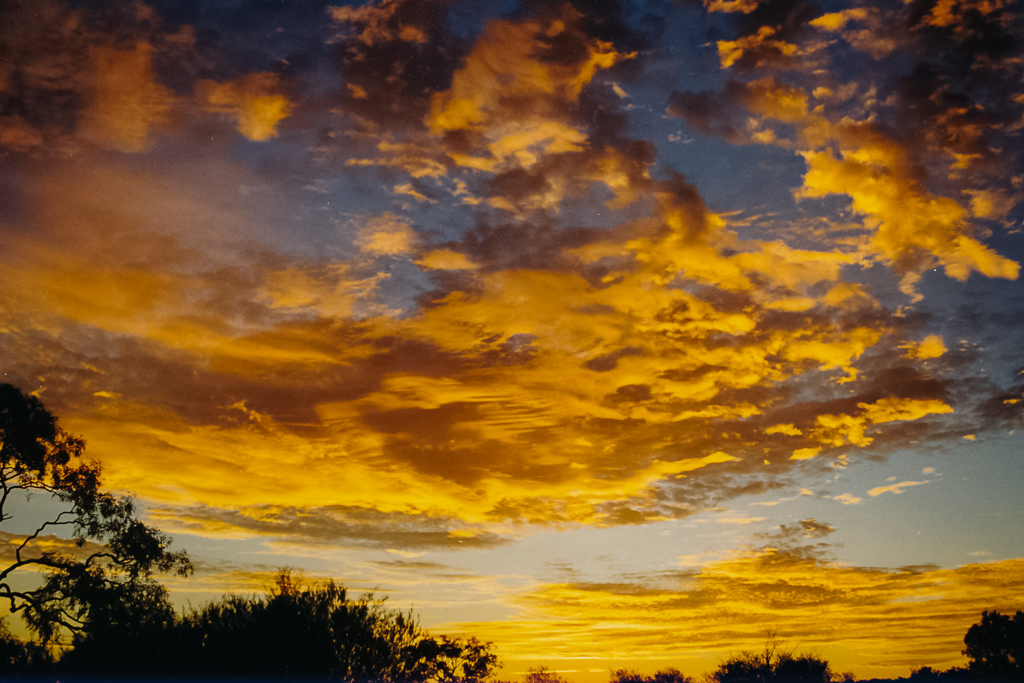 The sunsets in the Northern Territory are always unbelievable. 35mm film.

That’s the latest medical situation and I know how much you wanted to be updated. Reading blogs about active people walking is starting to do my head in a little, but there’s not much I can do about it just yet. Now, the next part is about my dad. He’s just ticked over 89 years of age and over the last few years he’s totally lost his marbles. Dementia sucks and I’m yet to find anything really good about ageing, other than eating food through a straw. Imagine fish and chips through a straw? I can’t wait.

Anyway, he’s ended up in a nursing home and I’m left at home trying to sort out the things he collected and refused to throw away for the past 80 years. You know, receipts for stuff from 1985 and things like that. I’ve been going through it all, but hit the wall when confronted with mountains of food he decided to buy, even when he didn’t need it. 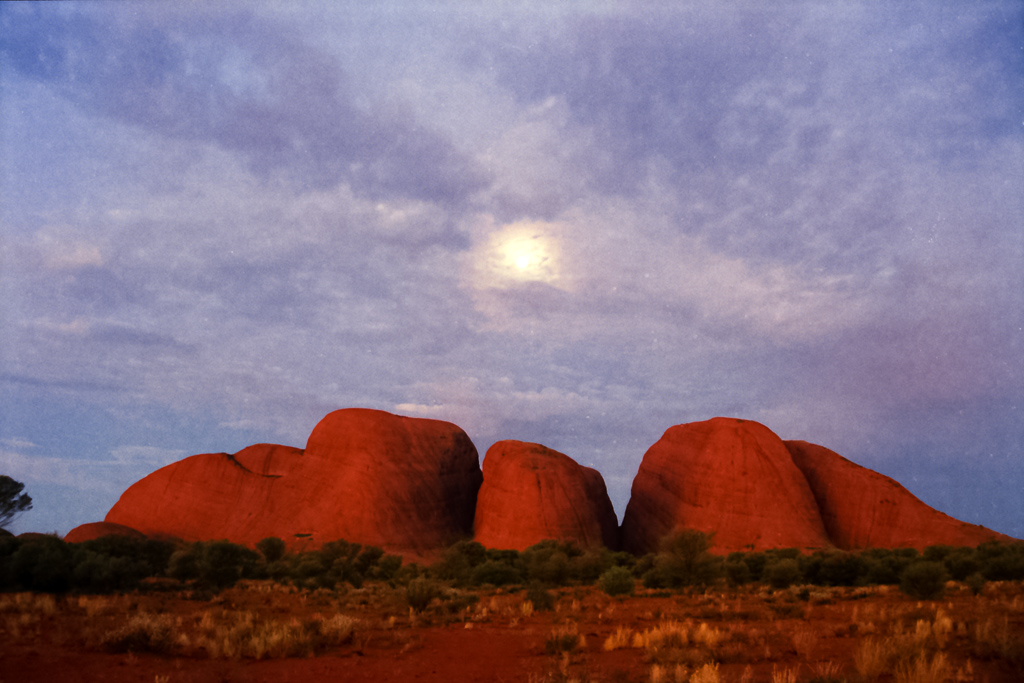 Father and son relationships can be a little fraught at the best of times. He’s a pretty distant sort of a bloke and when growing up, I don’t remember many fun times with him. He’s the product of another time though, being a Greek Cypriot from a village that lived through the depression, minimal education and lying about his age to join the British Army at some absurd age, which I think was 16.

This decision took him to Crete where in World War II during 1941 he ended up battling the Fallschirmjäger, resulting in being captured and spending the rest of the war as a prisoner in Germany. The fun didn’t end there though, as he was put to work in a German factory that was bombed by British bombers a number of times at night. He endured a crazy youth, which I guess would drive anyone over the edge.

The trouble is, one of the main aspects of his character that has bothered me eternally is his fearsome racism in which he essentially hates everyone of a different colour. He’s the master of some amazingly offensive statements, which leads to the Corn Flakes. You were wondering where they’d reappear, didn’t you? 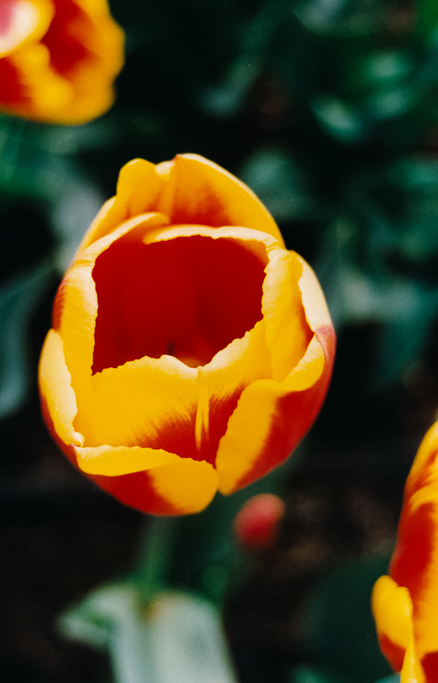 There were so many boxes of Corn Flakes sitting around the house I was wondering what to do with them, seeing how I haven’t eaten any since 1971. What’s more, I opened a cupboard that revealed the ‘Great Wall of Washing Powder’. I’m more of a washing liquid sort of man, so I had to work out what to do with them as well. It’d be easy to use it myself, but why not give it to all the powder lovers of the world? 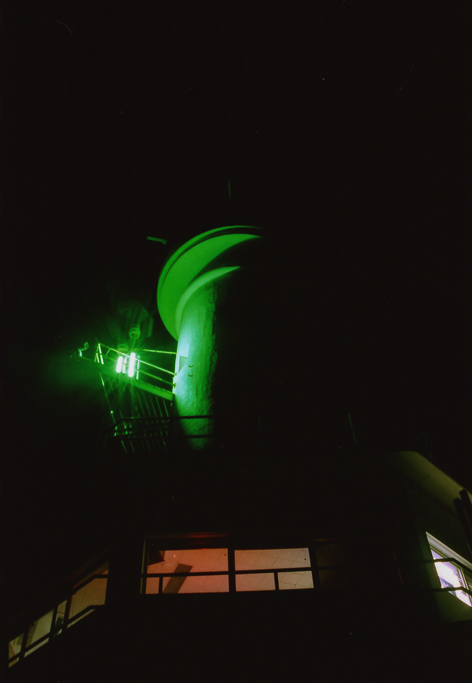 A quick change of tack to keep you on your toes, but it’ll all make sense in the end. I’m a bit of an independent radio station listener and my station of choice in Melbourne is 3RRR. In fact I’ve only ever listened to independent radio, as I’ve been an alternative music nut all my whole life. 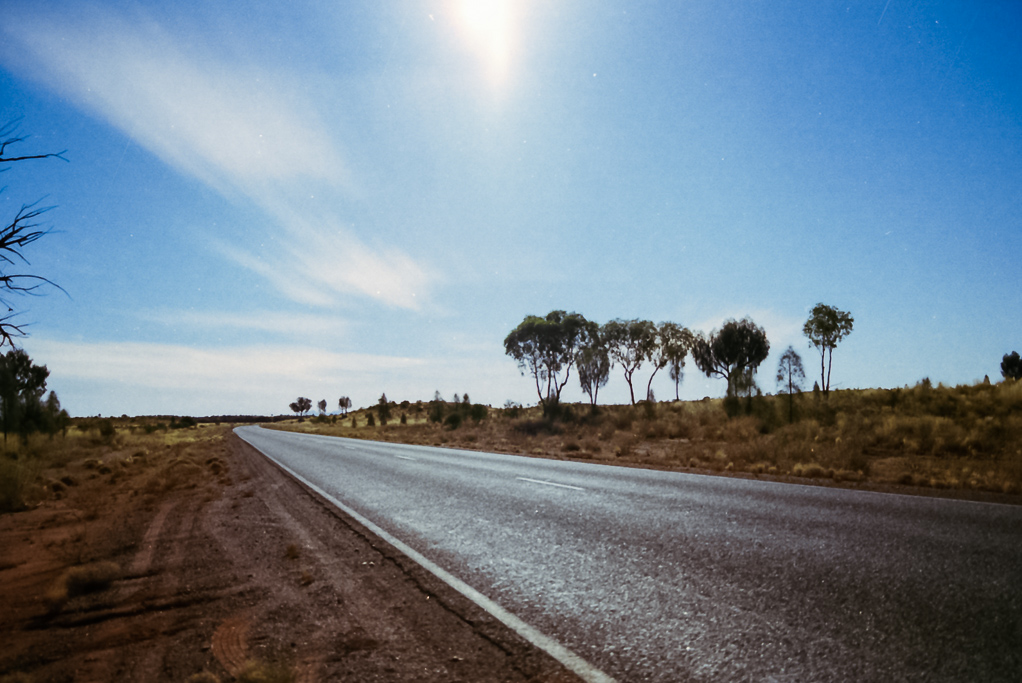 30 minute exposure at midnight in the Northern Territory. 35mm film.

I was listening one day when a bloke popped up on the radio, talking about the ‘Asylum Seeker Resource Centre’ in Melbourne. I’m not going to go into the whole asylum seeker business, as all it would result in is a flurry of right wing ball-bags knocking my blog door down. I always get sucked into that sort of stuff which is pointless really, but a switch clicks in my brain and I slip into a red mist tirade that appears as if I have a mental illness and a sore neck. Hang on? 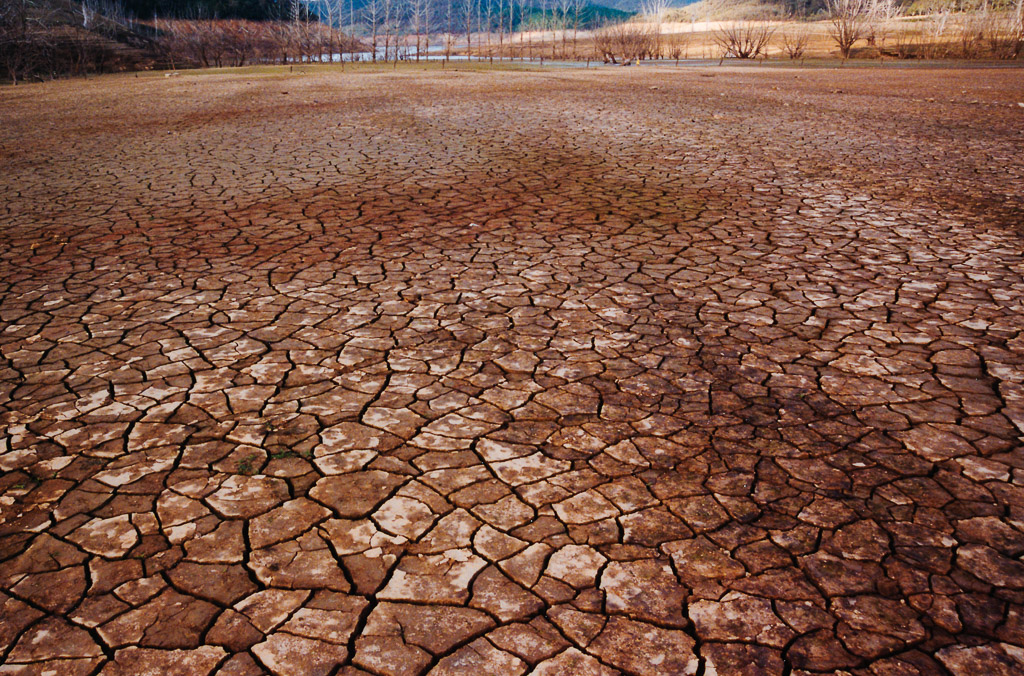 The only thing I can say is that ignorance and a lack of empathy is a horrible combination. Can I throw in that there’s nothing uglier than stupidity while I’m at it? I live in a very multi-cultural suburb and it suits me fine instead of a white bread style of community. That’s when the light switched on in my brain about what to do with all of the Corn Flakes and the washing powder. I checked the ASRC website, which contains a wealth of information and noted they were short of donations, particularly breakfast cereals and washing powder. Aha!

Another look at Tango…?

So, Ben and I loaded up the car and headed off to the ASRC to drop the stuff off. Upon arriving I went to the main office and we were struck by the sheer friendliness and enthusiasm of the staff. They definitely wanted the cereal, as apparently corn flakes are mega popular due to their recognition around the world. We were shaking hands with smiling people and it was such a refreshing thing to see that I felt really good about what we were doing, even though it was quite a minor thing. Oh yeah, by the way the kitchen staff seemed like legends, considering most people who do that work are volunteers only. It certainly beat hanging out with (other than the odd exception) the jaded, burnt out mob I work with daily.

The bottom line to the story is how ironic the whole exercise was. My dad who despises practically everyone from Jews, blacks, Asians and Turks just for starters, actually had his precious Corn Flakes and washing powder end up helping out the people he hates. Life can be pretty strange at times. Farewell for now. 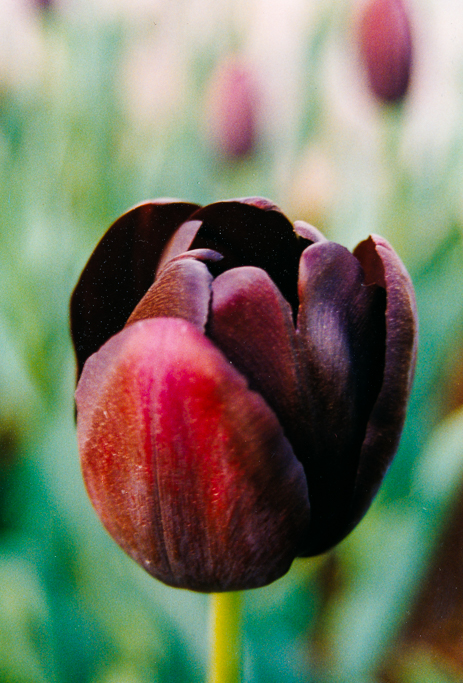 One more tulip for the road.