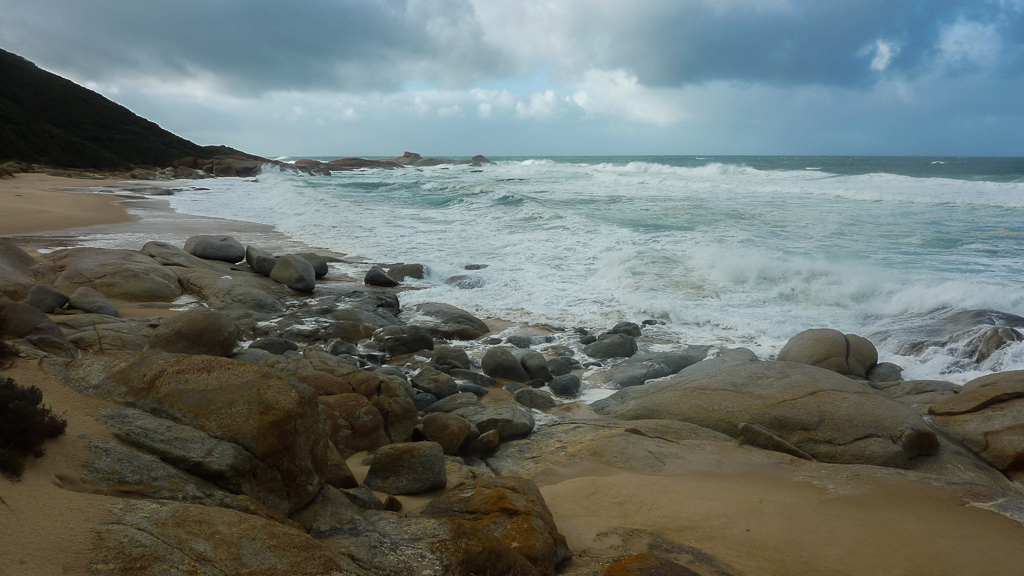 What can I say? In hindsight, this was an interesting hike with its own unique problems. The first is access, as it’s not an easy place to get to if you’re going solo. If a few people are hiking, then a car shuffle could be utilised, but I found it harder to organise than any other hike I’ve done. My Tasmanian hikes were easier for logistics than this one.

The final wash up is it was 83 km of walking from Cape Conran to Mallacoota through the Croajingolong National Park, Victoria. There’s one thing I can say about this hike. It’s surprisingly remote and once the walk is under way, there aren’t many places to easily opt out if problems arose. One of the appeals though is it’s one of the twelve World Biosphere areas in Australia. It did feel like wilderness and over the week I only saw a handful of people. It was winter of course, so I’m not sure what goes on in the warmer months.

It’s probably not such a hard hike. What spiced it up for me was the weather. I had three days of shockers with heavy rain and what felt like gale force winds. If you have a week of calm, mild weather, then it wouldn’t be too taxing. Being winter, I also had the problem of the short day, so a couple of times I reached camp as light was fading. It also meant I couldn’t pick and choose the tides, as I had to make do with whatever they were.

At least 70% of the hike was on the beach. It’s hard to describe beach walking for extended periods unless it’s experienced first hand. Initially it killed me, before I got into some sort of rhythm, but at no time did I find it particularly ‘easy’. I found scrambling on wet rocks with a heavy backpack to be pretty tough on the knees and I wished my joints were 20 years younger!

I’m a heavy build and I was carrying a lot in the pack, which obviously didn’t help. Drinking water is a problem and I did carry a lot on some days. I took a ten litre MSR dromedary bag which I never filled, but on some days I was carrying six litres when there was a chance I wouldn’t find any water for a couple of days. Just to be safe, I’d rather suffer with the weight of the water than run the risk of going dry.

I can’t complain about my gear and I don’t think I could have left anything behind. I carried a Garmin GPS 60CSx with topographic maps which is a great investment. Also, I had paper maps and compass just in case, but I had no real problem navigating in this walk. The tracks near Red River and through the Sandpatch Wilderness Area are no longer maintained, so some of them were heavily overgrown. They weren’t a total wipe out though, as I could still find my way okay and the GPS certainly helped reaffirm where I was meant to be at any time I began to wonder! The unmaintained tracks are shown on the GPS, so it did solve the odd problem of navigation when it arose.

What else did I take? I’m not going to go through everything, but I’ll just list some of the main item. The backpack used was an 85 litre One Planet Strezlecki which I couldn’t fault. It was strong enough to survive a decent fall onto rocks near Benedore River and felt reasonably comfortable. The trade off though is it’s heavy in pack weight alone.

My shelter was an Outdoor Research Alpine Bivy which came through with flying colours in regards to being waterproof! There were plenty of nights of heavy rain and the bivy stayed dry. The only thing that took a couple of days to get right was how much the main zipper should be open when sleeping. If it’s too restricted you’ll wake up in a condensation nightmare. I figured it out eventually and I can’t really complain too much. The hoop works well enough in keeping some room above the face. It’s a little restrictive, but hey, that’s the point of a bivy, right?!

Would I do it again?  Mm…not sure. Not unless I can drag my son along, so there’s an opportunity to share the pain! The hike was crap at times, but looking back after a couple of months it doesn’t seem too bad. That’s always the way though isn’t it?!

Oh yeah, the complete set of photos I took can be found here in a Picasa album I put together. If you’re bored out of your mind one day, feel free to have a look. It might be suitable also if you’re suffering from insomnia? 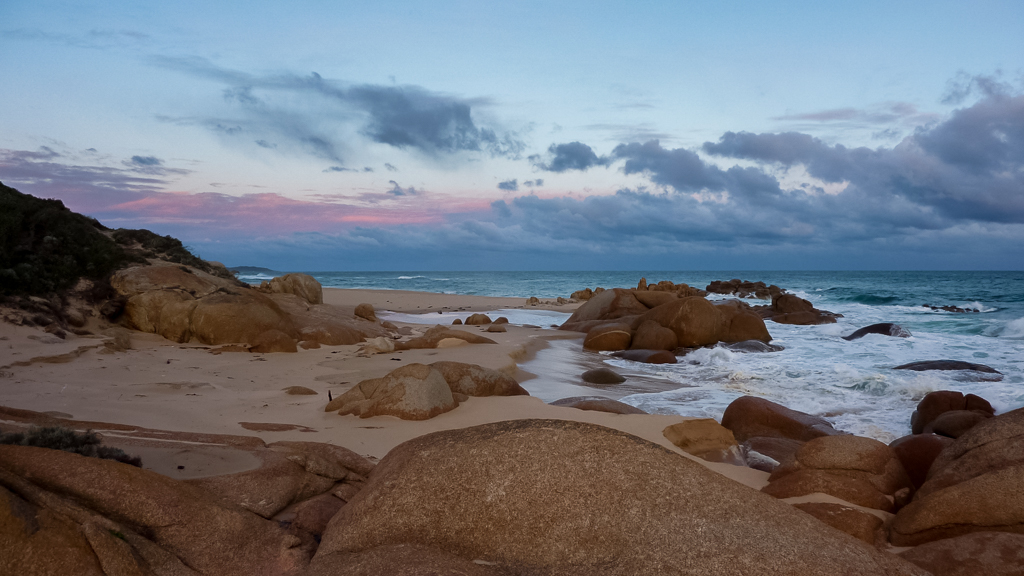