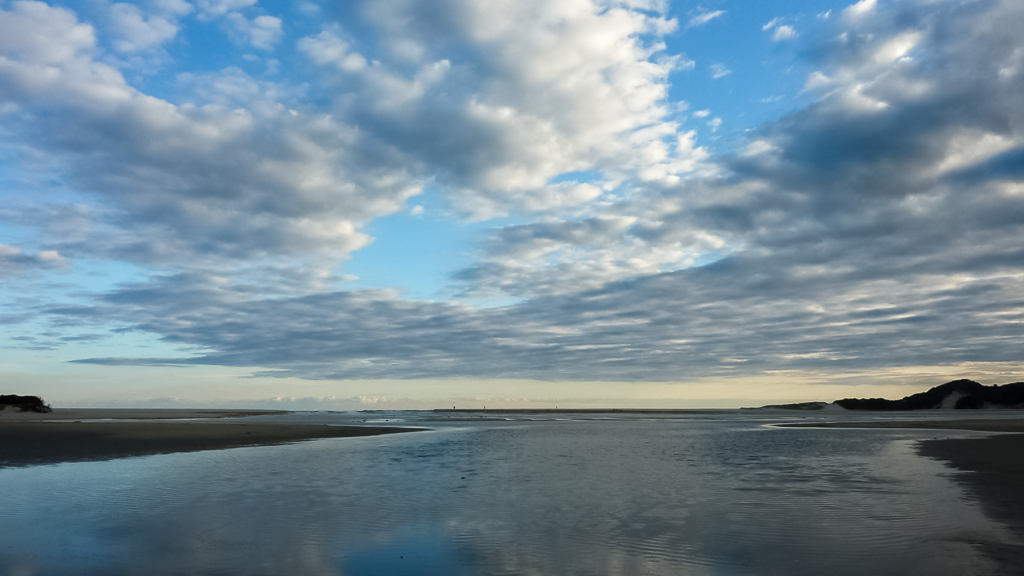 I must start this entry by apologising that it’s going to be a bit heavy on writing instead of photos. It’s what happens though when I only had two camera batteries for the week. I tend to hold off a bit at the start of the hike to preserve them.

My night spent at Dock Inlet was quite comfortable and I was quite impressed at how well I slept on sand. Something not in the right position? Easy, just belt it slightly and it goes into the spot I want it to be. There’s one thing about sand though and it’s kind of chilly, which tested out my new Exped SIM light sleeping mat.

The day was clear and sunny which had me thinking, “How easy is this hiking caper?” I did notice though that the previous days sand walking had produced some unusual aches. Not in the legs, but in the bum. It felt like my buns had been pounded by Mike Tyson working a heavy bag. It wasn’t ideal, but I figured I’d get used to it. Dock Inlet looked great under the weak, winter sun, so let’s look at it again. 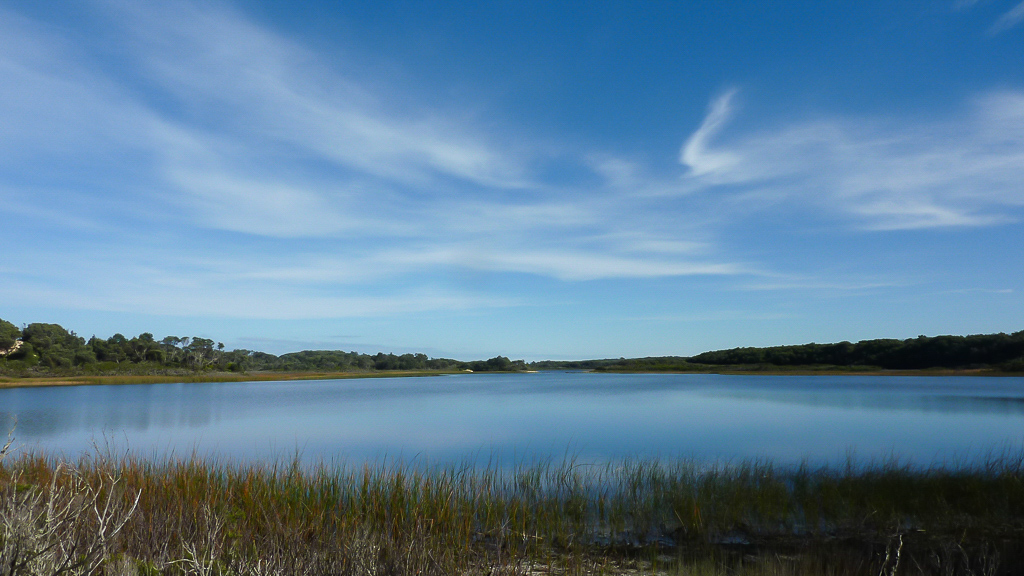 I packed up and it was time to consider the day ahead. I did know that it would be a bit of an average walking day regarding sights. The reason being is this hike has a number of inlets that are normally closed to the sea by sand banks. The week before I started though, I learned that one of them had been opened, so that needed negotiating. I had a 10 km walk from Dock Inlet to Sydenham Inlet, Croajingolong National Park, but I’d go via Bemm River to get some transport across the open inlet. Beforehand, the Mallacoota Parks Victoria office told me the inlet had been opened in order to stop Bemm River from flooding to recent heavy rain.

I had never been to the inlet before, but I was advised that it’s impossible to cross on foot as the opening is deep and the current too fast. So, my options were to drown or get a lift across the inlet from a fisherman at Bemm River itself. I suggested to the parks officer that the inlet could be closed for me and then reopened again after I’d passed. I’m sure no one would drown in Bemm River whilst that was done. The officer said, “No” and I actually think she thought I was serious.

Plans were clearly needed, so I ended up talking to a bloke who runs the Bemm River tackle shop. He offered to take me across the inlet if I walked into Bemm River. This sounded like a great plan as it meant I didn’t need to consider cancelling the hike. It meant a pretty dreary day of walking though, as I had to stroll along an inland road following telephone poles all the way to Bemm River. The bonus being was there would be no sand walking, so I was going to make some pretty good time.

I headed off inland onto the sandy road which was roughly ten kilometres long, cut between trees and dotted with the power poles. I was thinking it was marginally better than walking in the suburbs of Melbourne. Only marginal though as the pack was still heavy, but I guess at least I didn’t have to avoid any traffic.

Arriving at Bemm River, I soon found the tackle shop. That seemed easy, but things were never going to go so smooth were they? I walked in to find a couple of people just stop talking and stare at me. I guess I looked a little weird in hiking gear, but they reacted as if I’d just stepped out of a flying saucer.

This is where the problem started, as I was informed that the bloke who was going to take me across the inlet had already left in his boat and I was essentially stranded. I asked about other ‘options’ and there was a general all round shrugging of the shoulders and a feeling in the air of, “bad luck big boy”.

The one idea given to me was to go to the boat ramp nearby and try to get a lift from anyone turning up in a boat. It sounded like a pretty threadbare plan, but at least it was something. So, I strolled on down and sat off any cars turning up to launch boats. The only trouble was that in an hour of sitting by the boat ramp, exactly zero people turned up.

Eventually one arrived, but it was coming in and not going out, which would have made asking for a lift problematic. In the end, once I looked at the bloke hopping ashore, I declined in asking. He was a dead ringer for Charles Manson, complete with an extra large knife on his belt. This was a nice touch for the ‘wild man’ look. As they took the boat out of the water and left I began to think I was going to be stuck in Bemm River for the rest of my life.

Just as I started to consider suicide, things got a little entertaining. Some bloke turned up in a car full of dogs and immediately approached me. He asked me what I was doing and when I told him I was hiking and waiting for someone to take me across the inlet he was intrigued.

It wasn’t the response I was expecting, so I said, ‘Mm… Okay, tell me more. Maybe?’ He then delivered a solid spray of how everyone in the town were people I’d never want to spend time. All they do is bump up prices to rip people off and generally, are just shit people. I’ve no idea if any of this is true, but he did provide some entertainment to pass the time. He was really fired up and I didn’t have anything else to do other than stay quiet and listen to him blasting the town, people and universe.

This was all good, but what about getting across the inlet? Well, things were looking better as a couple of blokes turned up with a boat to launch. Firstly, they didn’t look like mass murderers. This was a bonus, so there was a possibility of getting a lift.

As they ‘launched’ their boat, my chances improved a whole lot more. Whilst reversing down the ramp the actual boat didn’t appear to be connected to the trailer real well. In fact as the car neared the water the boat just slid off the trailer until the nose was vertical pointing at the sky. Even more worrying though was the sound, as the rear of the boat slammed into the concrete ramp. I wasn’t familiar with the distinctive noise, but I guessed it was similar to smashing fibreglass.

This was bad for those two blokes launching, but perfect for me. With assistance from Mr Tirade, we helped get the boat level and adopt the ‘float position’ rather than the ‘Cape Canaveral’ position. After putting in a big effort in helping out, I thought it was the perfect time to throw in my lift request. Happily for me, they had no hesitation in agreeing.

Due to the crazed launch the boats engine took a while to start. Initially concerning, but eventually it fired up. Even better, there were no holes from the ramp smashing action. Heading off, I noted on the GPS how fast I was now walking. At 30 km/h I probably wouldn’t be able to beat that for the rest of the hike.

Those two blokes in the boat were great. They ended up taking me to the opposite side of the open inlet and dropped me off on a sandbar. I didn’t even get my feet wet. Initially they seemed slightly highly strung, as they discussed where to drop me off. One pointed to a spot that was on the wrong side of the inlet to which the driver replied,

“How would he get across then you stupid prick?” Okay, that was pretty funny and it was even more perfect for padding out this blog entry. 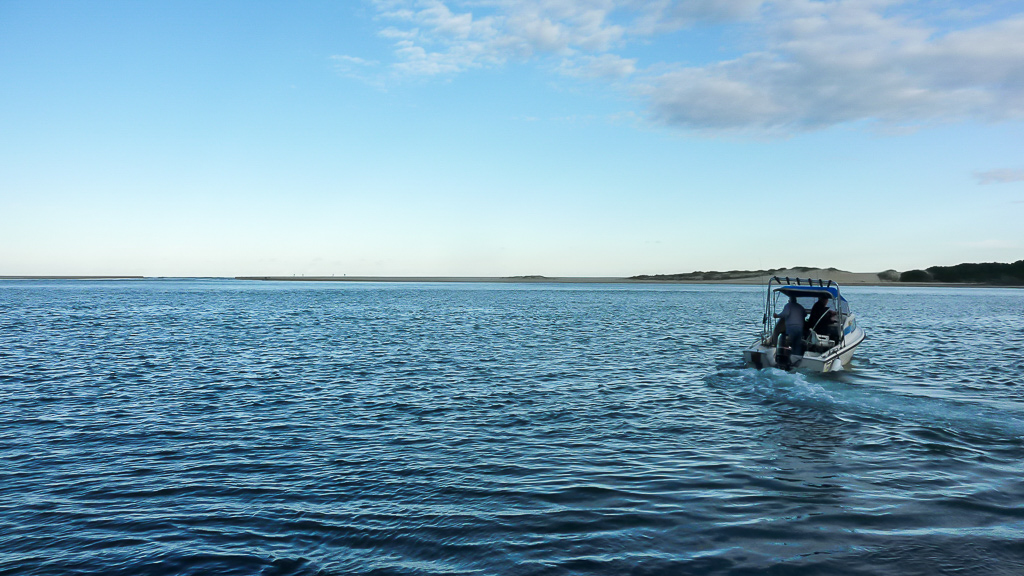 I was dropped off successfully on the side of the inlet I needed to be on and began to approach the ocean again across enormous sandbars. 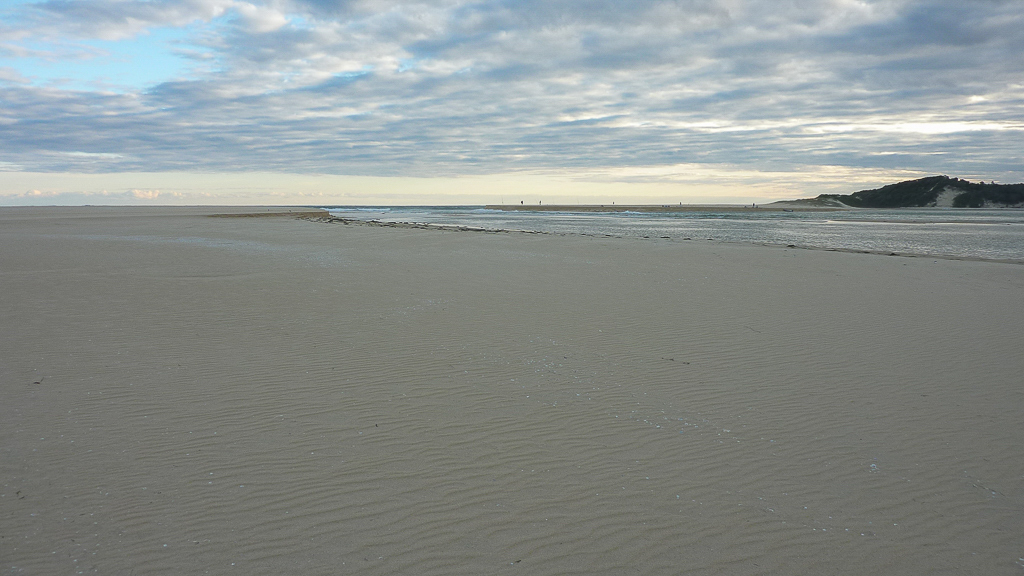 When I reached the mouth of the inlet I could see what the Parks Victoria officer meant about the crossing. It would have been impossible to cross at the entrance on foot as the water was deep, quick and nasty looking. I took a few photos and watched the people on the other side doing a bit of fishing. 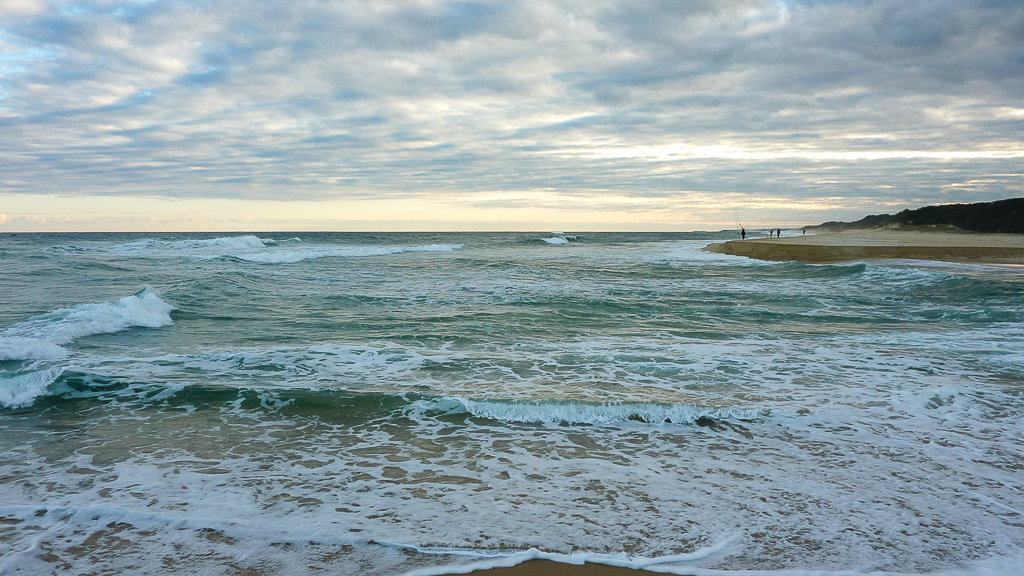 Really, looking at the next picture, what are your chances of swimming across this? 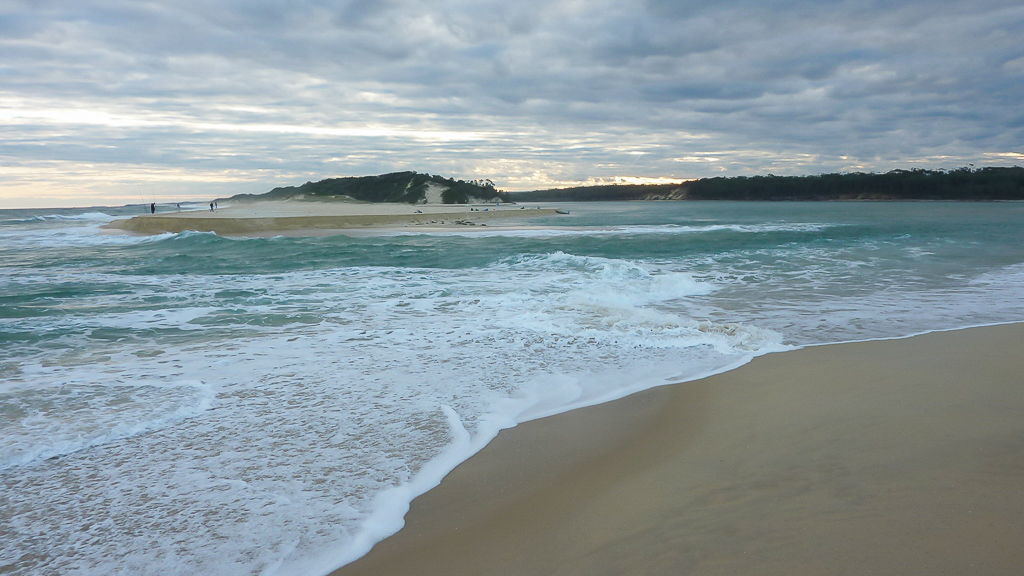 Whilst standing around for 20 minutes or so, I thought it was best to get moving and find a place for the night. I continued walking a little bit further down the beach, but not many spots caught my eye. 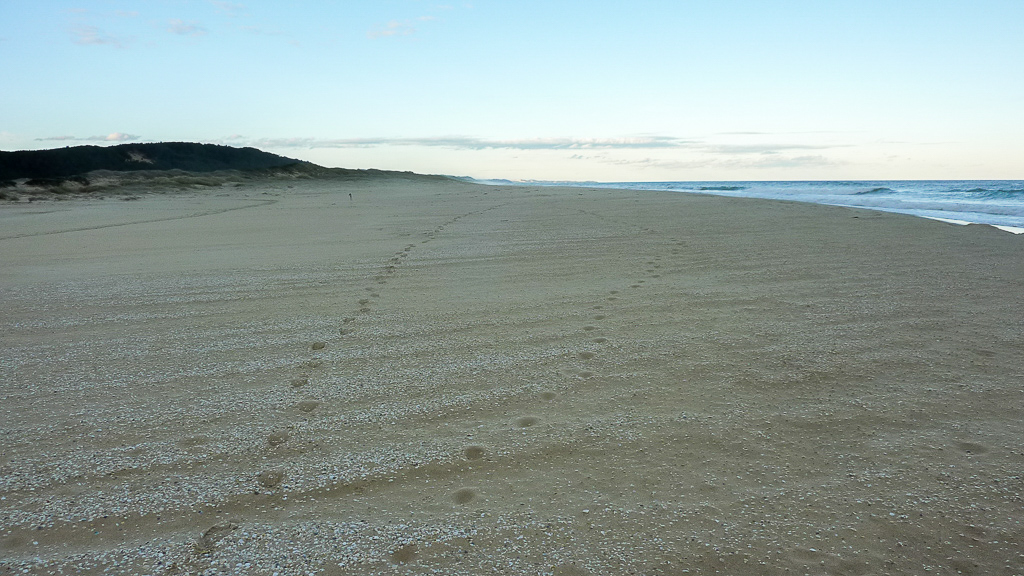 Light was getting low though and without any sign of wind or rain I decided to just set up the bivy on some sand dunes. I figured I didn’t really need too much of a shelter from the elements. 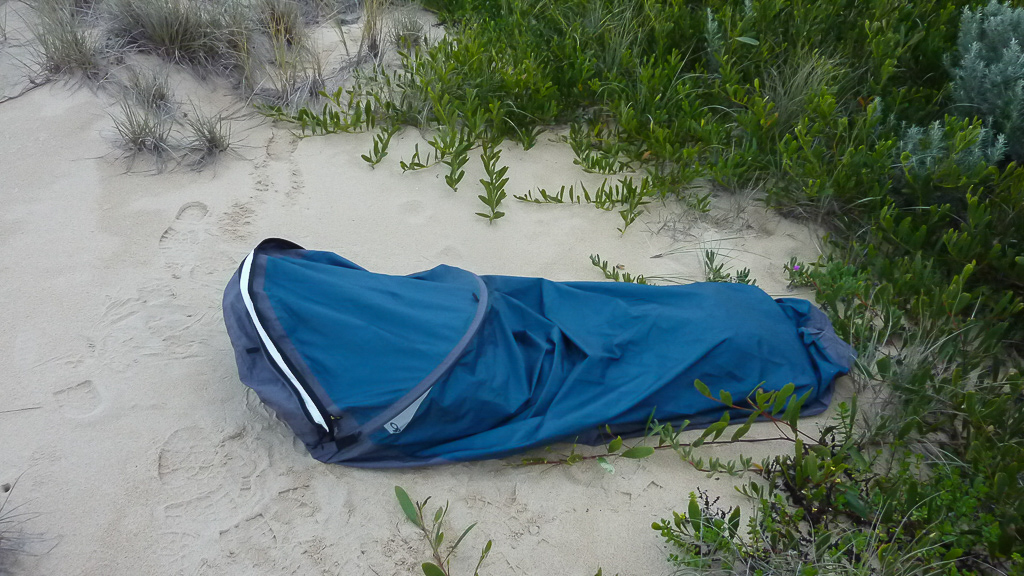 It looks dispiriting, but it wasn’t too bad.

I began cooking and whilst there was no wind at all, the sky out to sea look quite ominous. It began to look dark and grey which had me thinking rain might be on the way the next day. That was no big problem though, as I had plenty of wet weather gear with me. I noted on the GPS that it was a 19 km day, but mind you that includes a quick boat trip!

There was one final thing on my mind though. When light was fading, I was sitting on the sand getting ready for bed. About 150 metres away on the beach I saw two really big dogs wandering around the high-tide mark. There are dingoes along the coast and I assume the odd feral dog as well. These looked massive and I was really hoping they wouldn’t head my way for a late night visit. Getting munched whilst in the bivy wasn’t the greatest thought. I decided to adopt the traditional method of ‘put the iPod on and ignore any sound’. So I went to bed listening to a bit of ‘Death or Glory’ by The Clash… 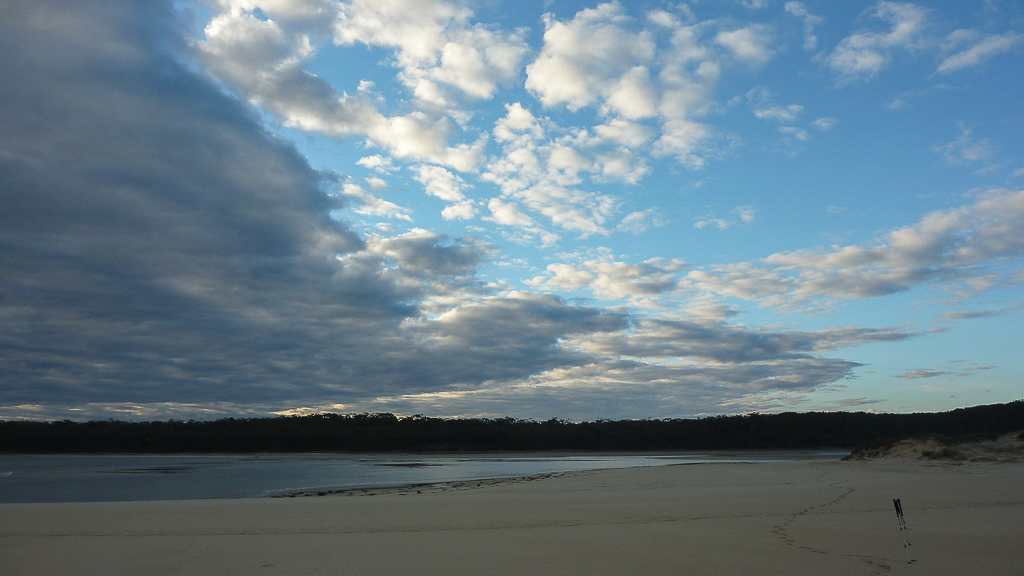