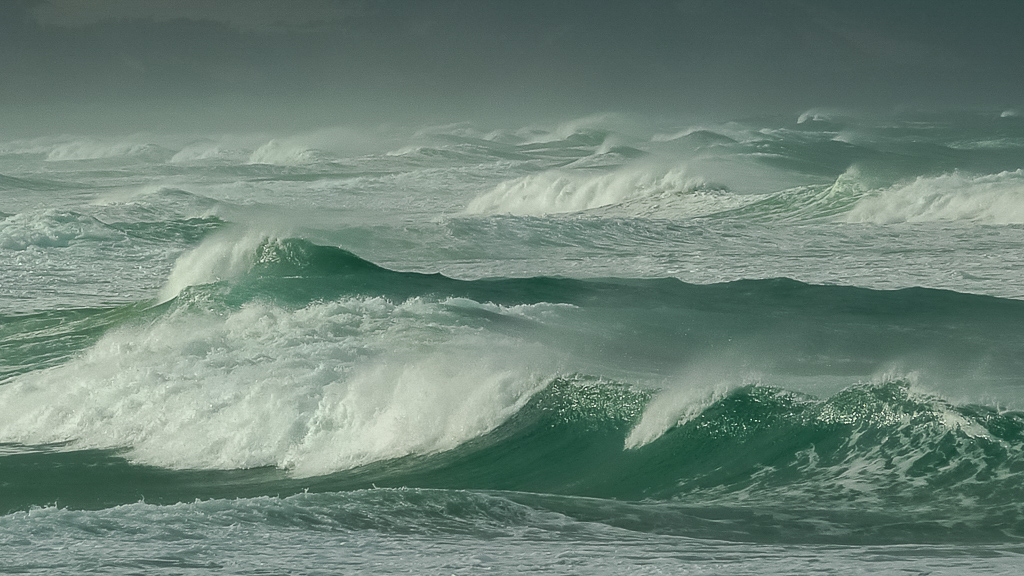 What’s been going on in your world? At my end not much has changed regarding this infernal neck pain which has me lying around, but at least I have an appointment with a neurosurgeon in less than a week who’ll hopefully give me some answers about some processes to enable me getting back into action.

I’m not totally convinced yet, as neurosurgeons just love a bit of ‘chop chop/slice and dice’ action, so who knows. For the time being you’ll just have to put up with loco-style blogging, where I’ll babble on about all sorts of crap until I get walking again. If it gets too weird, just let me know, but I’ve already worked out my answer, “Sorry, it’s not me, it’s the bipolar kicking in again.”

Oh yeah, I just took a morphine tablet as I started to write this and it reminded me of the weird conversation during my last doctor visit. The good doctor said, “I can prescribe you morphine, but there are some bad side effects.” I said, “Like what?” He said,”Well, death is one of them”. Mm… Interesting, but what’s the downside again?

In the end all I could reply was, “Oh okay, that’s not too bad, as at least I’ll get a good nights sleep. Any other effects? Is it going to affect my ability to choke the bishop? That’s worse than death isn’t it?” With that he just laughed, but I was actually being serious. So, after taking the pill that can kill me it’ll be interesting to see if this blog entry gets published. If it doesn’t, you know I’ve turned up my toes.

So, I’ve just started two weeks leave from work which was planned some time ago for a crack at week long, winter hiking. I like day walks, but if I had a choice, week long hiking is what I’d prefer to do. Oh well, instead I’m lying on the couch covered in crumbs from toast (how good is toast?) but one bonus is the Tour de France is on. I do like the bikes and I’ve had some mad moments in the past with lots and lots of road riding. I even reached the point where I used to get my legs waxed, as I didn’t want to get caught in the bunch with furball legs.

Whilst on that topic, it used to only cost $35 for a full leg wax, which I thought was pretty cheap. What do you reckon? I was always told I wouldn’t be able to take the pain, but I actually found it quite cathartic, although the toes were a little touch and go.

I kept my lips sealed though, as burnt into my brain are the words from my old army physical training sergeant who whilst we were doing some absurd exercise would always say, ‘Suffer in silence. Suffer in silence”. The Army is worth its only blog entry, but lets not get sidetracked.

Rule one. If you’re getting your legs waxed then don’t neglect the feet, otherwise you’ll look like a guaranteed freak. The woman who used to wax me on every visit would always come up with a some bizarre comment delivered in a resigned, nonchalant way, such as, “So, do you want your bum done or your balls waxed today?” I’d keep a straight face and reply, “Mm… Not today, maybe next time.”

Apparently I have pretty good looking legs when waxed, but this is usually mentioned when I’m wearing my high heels. Whilst on the topic, I found this photo that was taken during my riding era and on this occasion I was dressed up before going out on a first date. I pulled out all stops to look good and I know how much women like the, ‘higher than the stratosphere trouser look’, which you’ll agree does look pretty sexy. In the end I was pretty shocked she didn’t want to see me again. Maybe it was my shoes that were the problem? 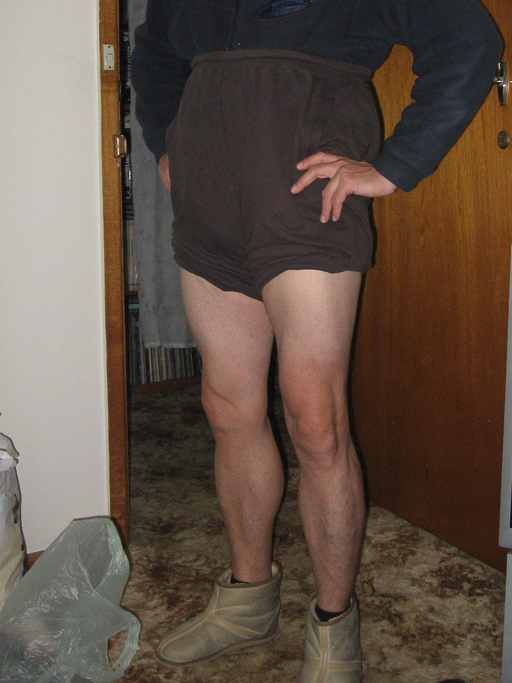 Okay, off the bikes, legs and back to the walking. I was just thinking the other day (on the couch remember) that it’s been just over a year since I walked the Croajingolong hike from Cape Conran to Mallacoota in East Gippsland, Victoria.

It’s a coastal walk, which I seem to remember was about 83 km long and so much more arduous than I’d anticipated. I reckon at least 70% was walking on soft sand, whilst being belted by strong wind and rain. A couple of things I found interesting is it’s as if no one has even heard of the place, but it just happens to be one of only 12 World Biosphere areas in Australia. 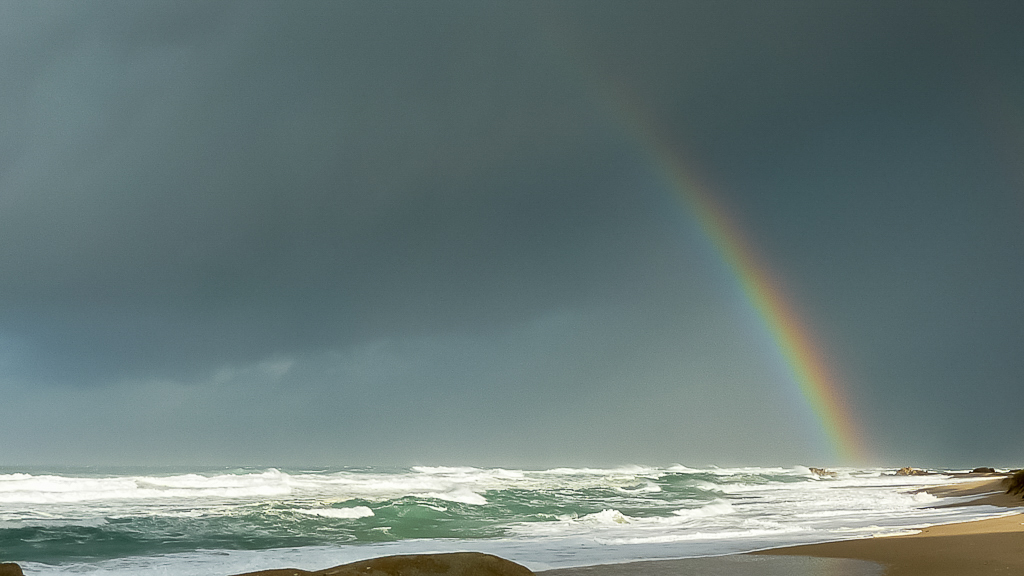 It had a big effect on me as a solo walker, which taught me more lessons than any other hike. I felt the wilderness aspect definitely, because I didn’t see another hiker for the week, but there were plenty of other things. I had a number of ugly falls whilst climbing and scrambling across wet rocks that left me pretty sore and mentally run down.

The big lesson of these falls is I was carrying a backpack of gear that was way too heavy and it’s something I’d never do again. When I think back, my mind boggles a little by how much I was lugging around. Before the trip I knew the weather was going to be gnarly, so I opted to take a 85 litre One Planet Strezlecki pack, which is known for its good waterproofing qualities.

It’s a good pack and what’s of interest is it’s the only pack I know endorsed by the Chiropractor’s Association of Australia. That should be good. Right? Well, since my recent visits to the chiropractor I might have to reassess this recommendation, as the main method of treatment was to grip my head and twist it so violently, I was positive he was trying to rip it off in order to keep it as a souvenir. Is this meant to be turning into a backpack review? Not really, maybe another time as I’ve got so many bloody packs I won’t know where to start.

Look, it’s a strong pack, which I proved as I accidently threw it off a cliff and it survived quite well. If I go back to what I was talking about originally, I reckon I started this walk with about 25 kg, which I’d never ever attempt to carry again.

I was told by Parks Victoria there might not be any water for about a 50 km stretch, so I loaded up big with the liquid. With the water worry, I didn’t take any dehydrated food that would need water, so in the end I was lugging so much crap it was demoralising.

Anyway, let’s reflect on the One Planet Strezlecki whilst framed by the beautiful Cannondale Six13 and another great Australian invention. The Hills Hoist. 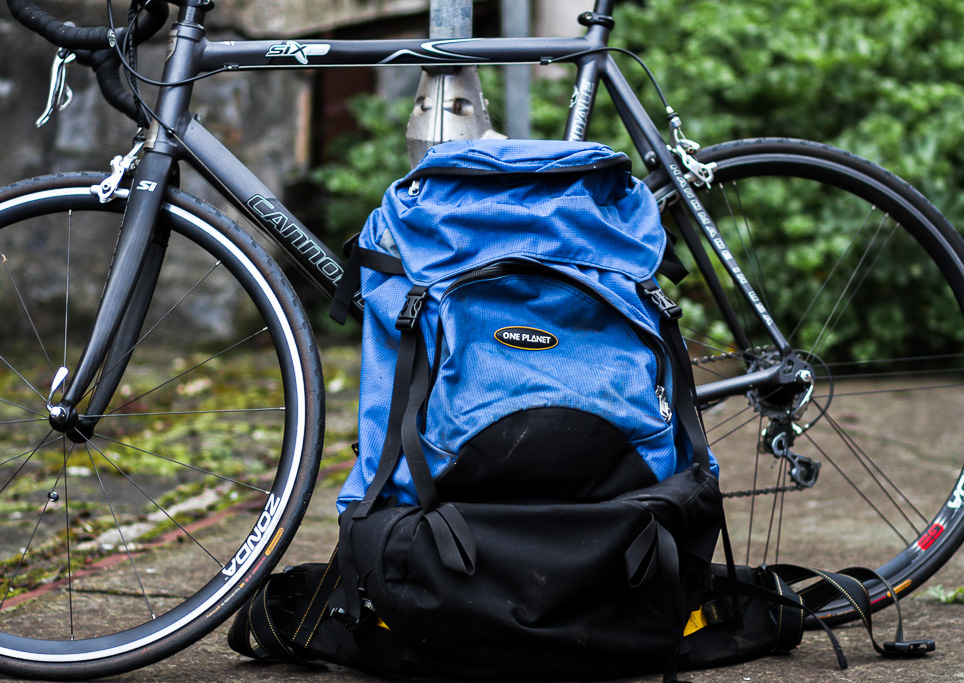 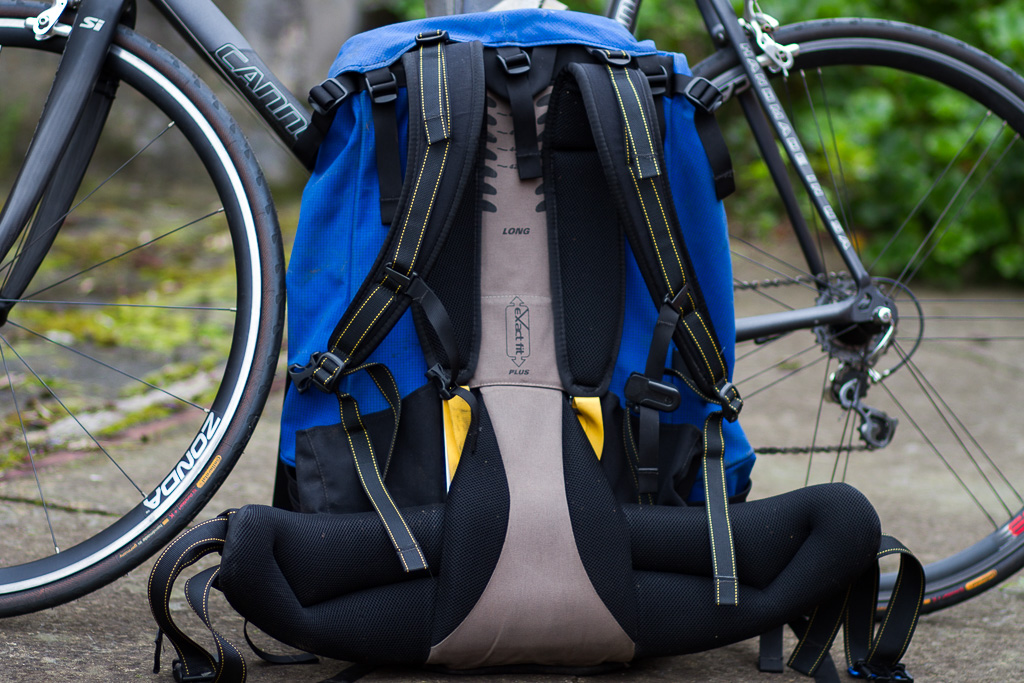 Don’t neglect the Six13 with Campagnolo running gear though

So, the end point in all this waffle is I’m going to go really light in the future, which will probably be forced upon me due to this neck business anyway. I’m already researching lighter packs and weight will go down no matter what it takes. Lately I’ve been experimenting with dental floss as underwear, just to reduce a few grams.

As a final point about the Croajingolong hike I have spent a couple of days re-visiting the photos I took. All of the pictures were taken on a Panasonic Lumix TZ-7 which I of course killed, but I managed to get some nice snaps before it died. What I’ve done is run all of the photos of the trip through Adobe Lightroom and give them a bit of a tweak. I didn’t do much post-processing, but I did plenty of re-alignment of horizons! I’m always amazed at how often I’m not holding the camera level. Here’s the link to them,

As it’s more or less each photo I took, you’ll find stuff from really good to really crap, but they’re all there, so if you’re ever a little bored whilst eating your croissant in the morning, feel free to have a perusal. 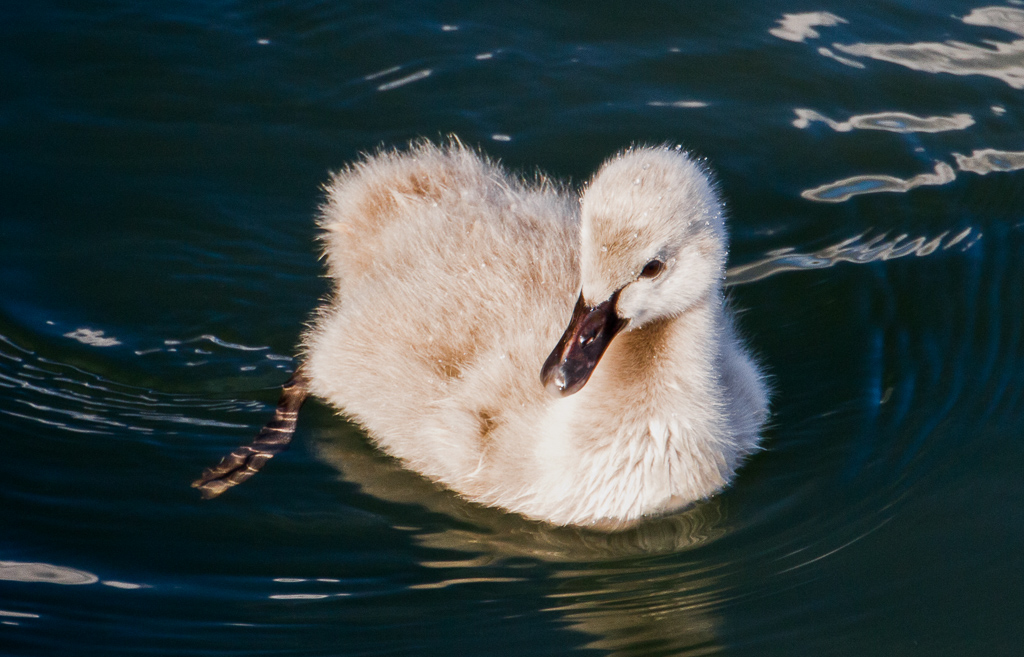 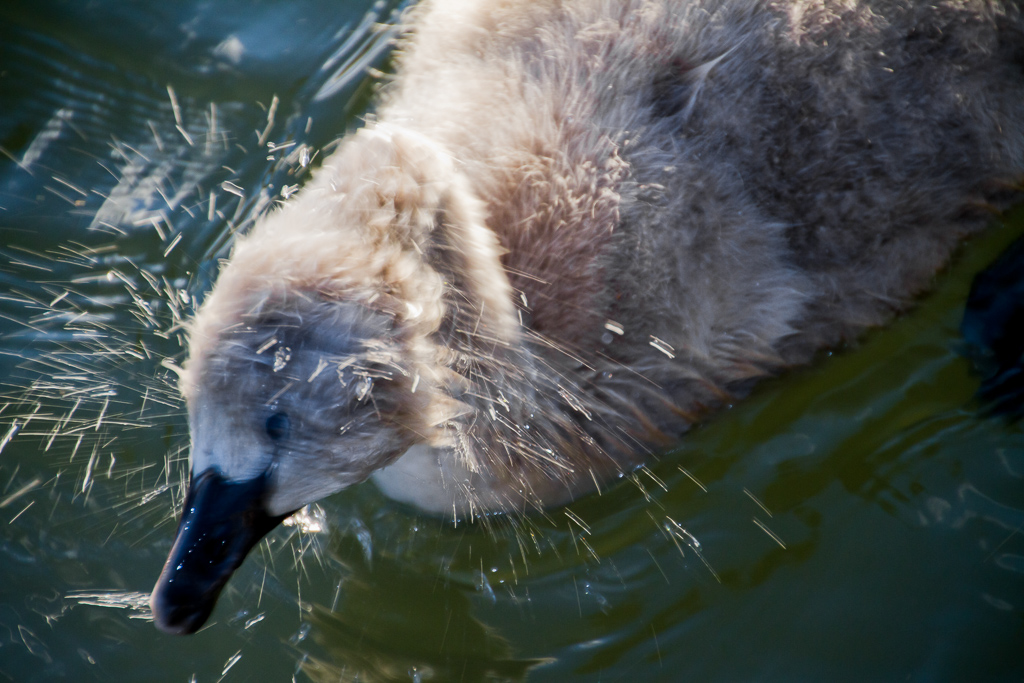 My next blog entry might slip off into a bit of art appreciation just to keep you on your toes, as I just bought a lovely painting last week. The story of buying the painting actually has a good story of how hiking met art. Sounds bizarre? Oh well, that’s my next topic.

Oh yeah, remember that morphine tablet I took at the start? As you can see, I’m still alive, but bloody hell, all it gave me was an insane struggle to stay awake. I’m not sure if the pain subsided much compared to the Valium. At least with the Valium, besides taking the edge off the hurting bit, it makes me feel quite happy. Next stop, heroin maybe? Well, I survived the morphine effects, although I had to put a bib on due to the amount of dribbling I was doing whilst trying to stay awake. Can anyone recommend some better pills? Legal would be a bonus.

Oh yeah, one more question. What’s the correct method of writing a headline and the use of capital letters? Crap grammar affects me more than it should, but there’s more important things in the world I guess. I was looking at this blog entry headline and something doesn’t seem quite right.

Anyway, it’s back to the Tour de France and it’s team time trial night. I’ve never really been a fan of that, but I’ll be watching whilst in my standard toast and heat pack position. Until next time, enjoy… 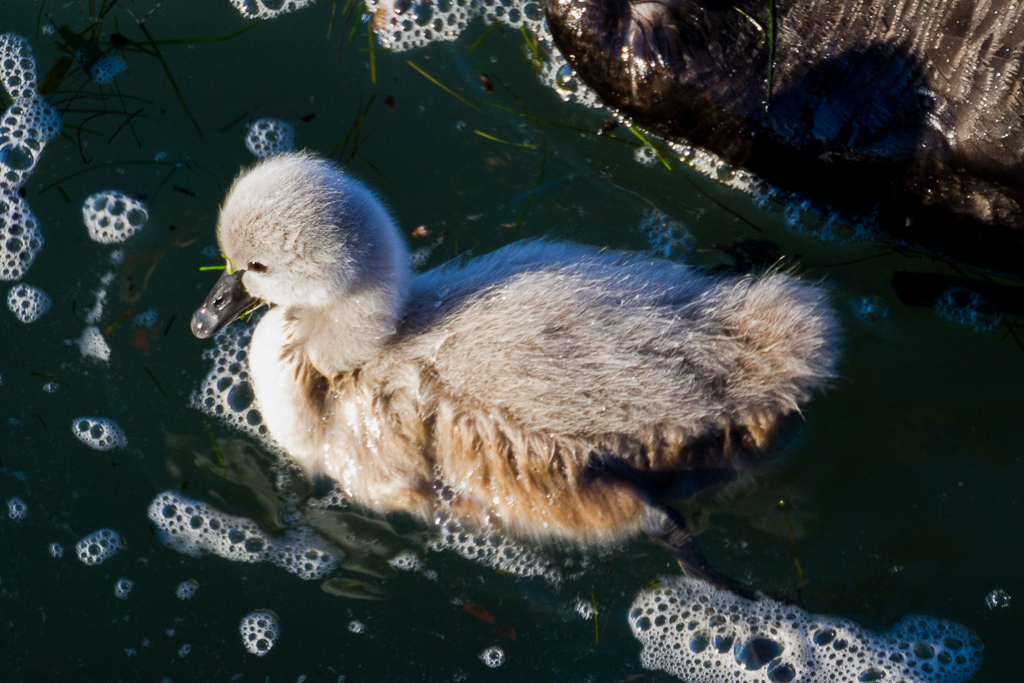 Well, this is the world’s quickest postscript. I finished the blog with a plea for a better blog entry headline as the previous one of, ‘One year on from the Croajingolong National Park hike plus some waxed legs…’ sounded insanely messy. No wonder there are people who specialise in writing headlines, as they certainly can make a difference. So, full marks to my friendly Grammar Nazi who has come through with flying colours no matter what the time of evening.