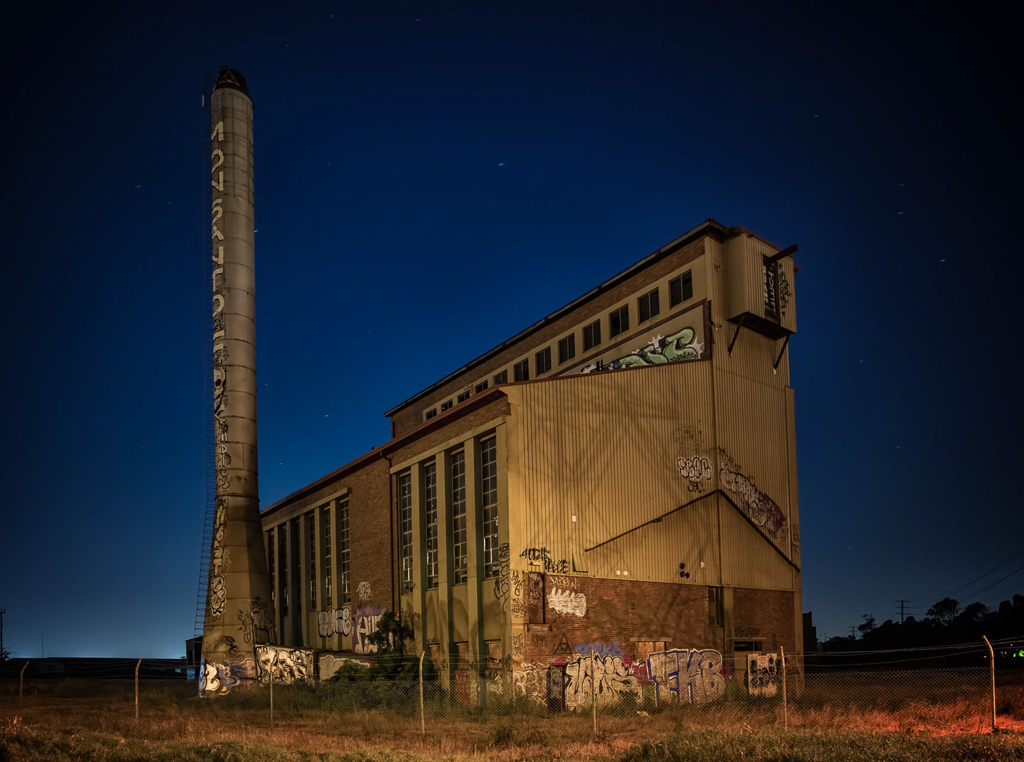 This factory was called the Bradmill Cotton Mills when it first opened in 1927. Since closing in 2007 it’s deteriorated a fair bit. I’d loved to have investigated it before it was covered in graffiti, but that’s the way it goes.

I’ve been there a few times and usually only at night. On this occasion, just after sunset, I decided to capture the main building in the one photo. Oh, but things aren’t that easy, are they? Alas, I’ve got to slip into camera-wanker mode now to describe my problem. If you’re not interested in the process, then feel free to bail out of here now. Bloody hell, I would if I was you.

Anyway, this is a big structure and although it’s easy fitting its bulk into the one picture with a wide angle lens, the nemesis of such a lens presents itself. Distortion. Walls become curved as they reach towards the sky and the accompanying chimney can look like a banana.

I’d stood in the same location last winter and the photos I took had a better evening sky, but they were unusable due to the distortion. Well, they’re okay, but once you notice those curves, it’s a distraction, so I always had to return.

The result? I could have gone to 16mm with this particular lens, but instead went with 21mm instead. With a lot of dicking around, I finally got a photo where the vertical lines are straight or good enough. It was taken at 8.45 pm and sunset was around 8.30 pm, so the light has the cool, blue tone to it.

The area is lit enough by the West Gate Freeway nearby and the reddish glow on the bottom right is from a nearby street lamp. Actually, that lamp was a killer, as it created a huge glow of lens flare, which I didn’t immediately notice, as it wasn’t visible in the viewfinder. So, I had to rotate the lens hood into a position where it actually appeared in the frame. What you see here is a crop, to cut out the intruding, black shadow from the hood.

Is there anything more can I add? A couple of things. Firstly, this would never have been a problem if I had a tilt-shift lens, but I can’t really justify the $2800 price tag and secondly, I give major props to whoever was wild enough to paint the enormous ‘Monsanto’ (complete with skull) down the side of the chimney. I assume they did it at night and I wonder if they used any safety climbing equipment, as that chimney is huge with only rudimentary ladder rungs on the side.

Hang on. This is meant to be a photo only post, so why am I talking so much? Time to go.