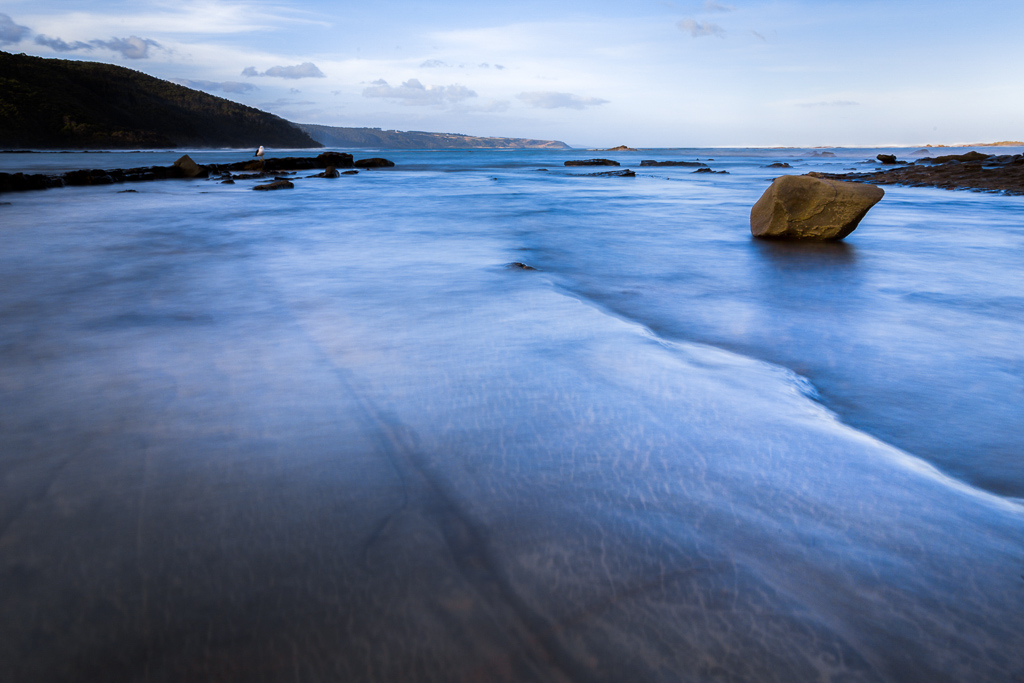 If you write about the outdoors, the absolute worst result is things going to plan. Who wants to read about me walking without complaining or injuring myself? Am I complaining now? Technically I am, but it’s not good complaining. Good complaining is finding myself at the bottom of a ravine with no way of escaping. Bad complaining is lying on a couch wondering why there’s no food in the fridge. Like right now.

Anyway, who wants to read about me being relaxed and happy at the end of a days stroll? Even I don’t and I’m the one living it. Simply put, sometimes things go to plan and the end result is a blog post, which will struggle to keep the most dedicated insomniac awake.

Where am I going with this? Alas, the walk from Elliot Ridge to Blanket Bay was one of those days. No injuries, no unusual occurrences, no near misses from meteorites, no nothing. The one bonus is you’ll just get up off the couch to make a cup of tea and by the time you sit down again with brew in hand, the post will be over.

Oh yeah, I must mention one thing before getting into the detail of this walk. During my spare time I’ve been putting in some work trying to locate Jimmy Hoffa. After a fair bit of research, I’ve managed to narrow down the search area to the following. A few weeks ago I sent this map to the FBI, but am still waiting for a response. Hopefully they’ll get some benefit from my extensive analysis. 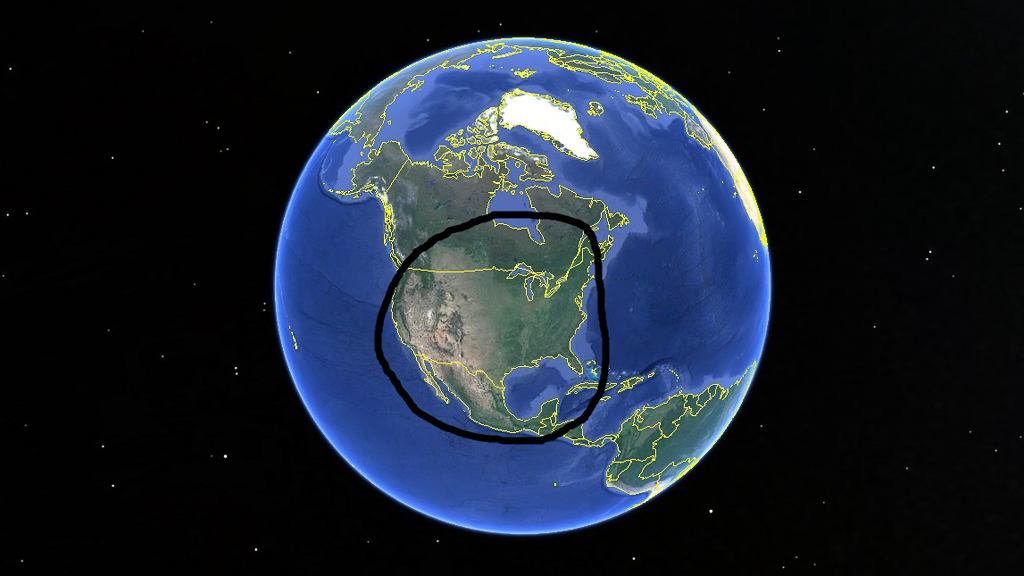 He’s definitely in this area.

Now the walk. Previously, this inland stretch through the Otways, whilst following management roads (then again, maybe they’re plain old roads?) hadn’t inspired me much. Mind you, on the last occasion it was a bit of a mud-fest, so maybe that didn’t help my mojo. All I remembered was some gradual uphill strolling, before suddenly standing on Blanket Bay beach wondering how I got there so quickly. I guess this feeling was revealed when I looked at my watch, which indicated it was only midday.

The map says it’s easy and I concur. If a generously sized gentleman such as me says it’s a cinch, then, well, it must be.

The first night was a bit of a wet one and nothing beats a bit of rain to see if a tent is sealed properly. Unluckily for you, the reader, my tent performed flawlessly. Morning brought a bit of sunshine and dry conditions, so I leapt out of my tent like a Valium-fuelled Ninja. Breakfast was inhaled and gear packed in record time. Unlike the ‘Rotterdam Rockets’. Our late arriving Dutch friends hadn’t stirred by the time we left. I wasn’t sure if they were sleeping in or had entered into a suicide pact overnight. If it was the latter, I’d want to get some distance on them, as nothing ruins a bush experience more than rotting corpses.

The next photo sort of sums up the entire day. A track surrounded by towering trees and ferns. 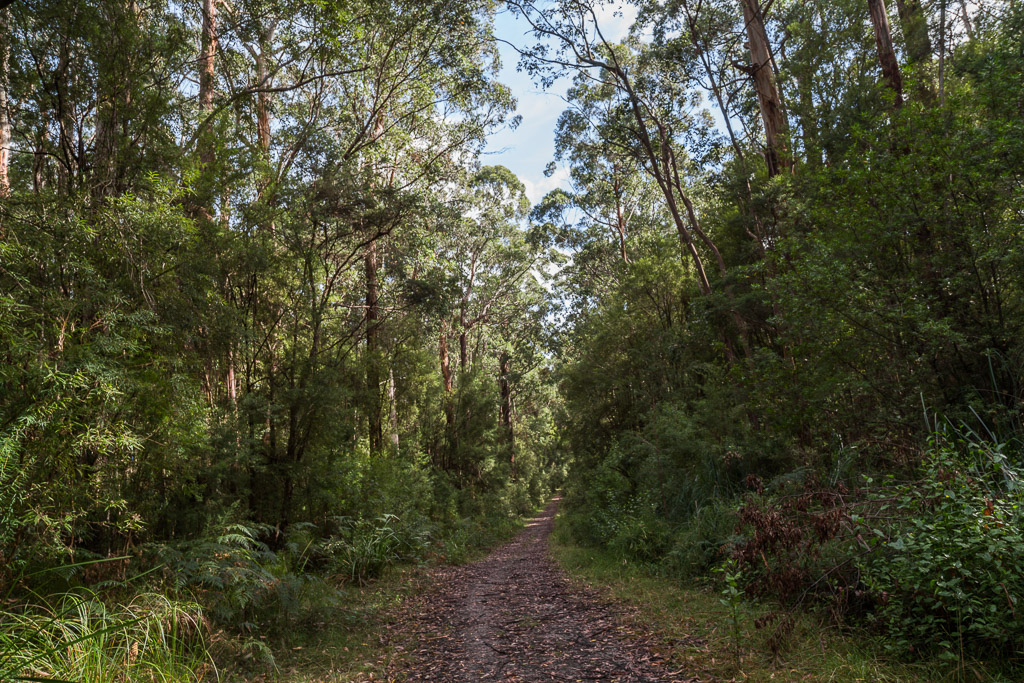 I must say, in the dry it was a bit of a different walking experience. Previously, I’d sloshed and slipped through mud for the majority of the time, but on a dry surface it was plain sailing. Not a lot to photograph, although I did spot this rare Otway black snail getting some speed up. Remember, other than the Otways, these aren’t found anywhere else in the world, so don’t go stomping on them thinking they’re garden snails. 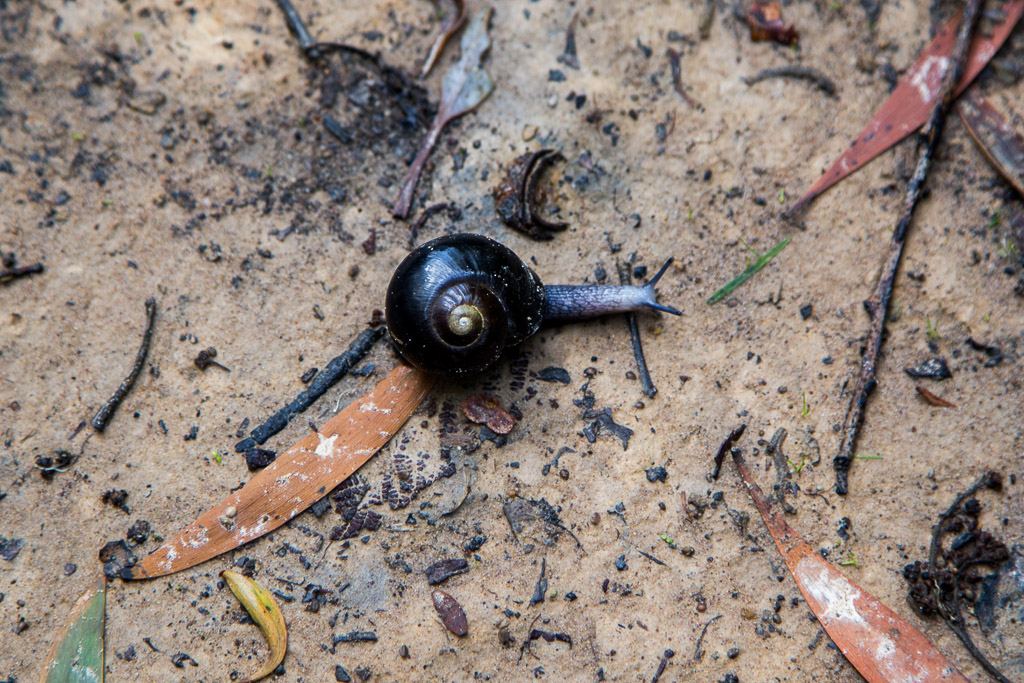 Mm… some Chernobyl green fungi were kind of interesting to look at. 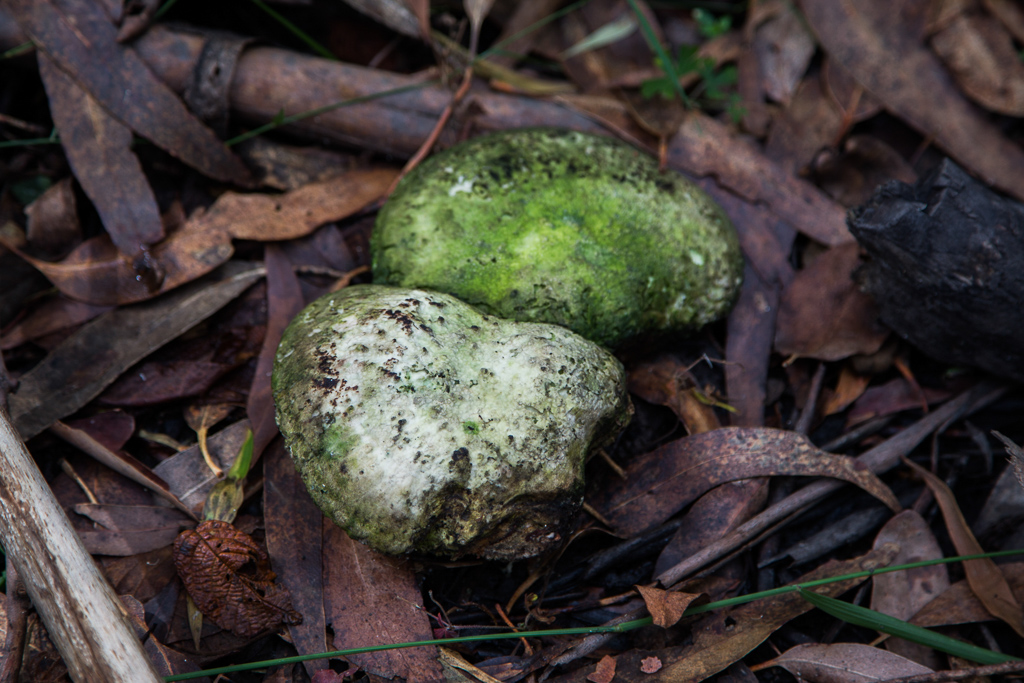 I’d be hesitant eating any though. Here’s one hiker who had one too many of the green devils. He’d need more than Panadol and a good nights sleep to get over these symptoms. 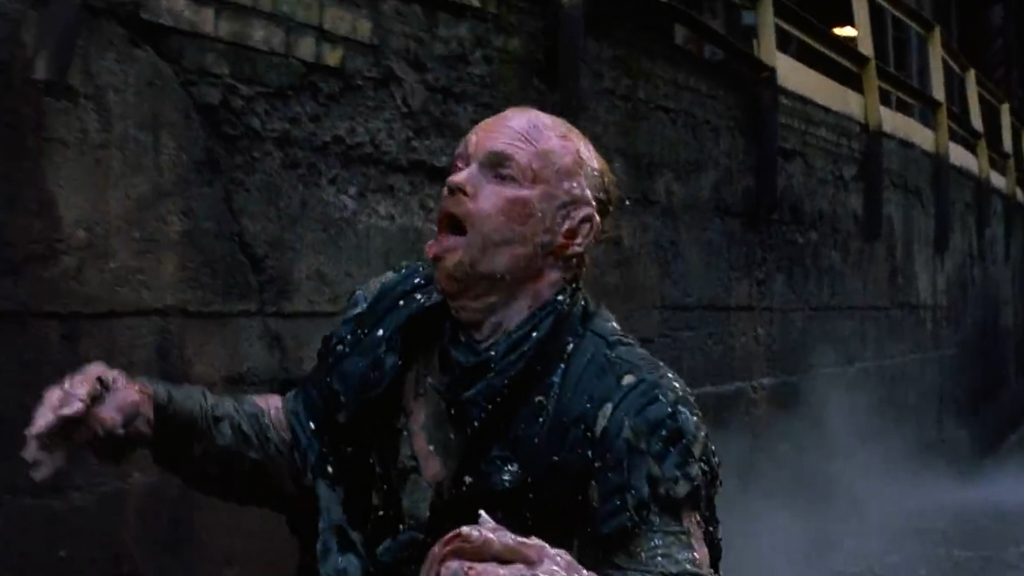 As per usual, Smuffin sprinted off, aiming to arrive at Blanket Bay before morning tea. He may have vanished into the distance, but his calling card was sighted in various spots. If you ever see any of these on a track, then you’ll know he’s in the surrounding hills. On a sidenote, did you know these used to be called an ‘iley face’? His ground breaking method of applying part of his name to words, has helped create the English language we know today. Smokestack, smooth, smallpox and smegma are just a few. 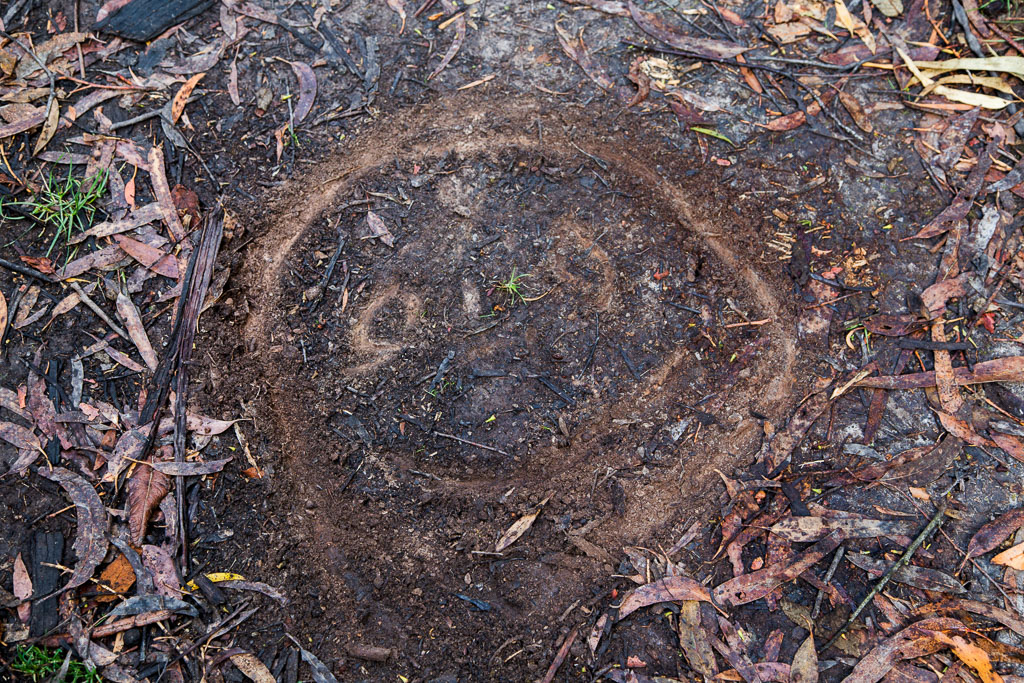 One highlight was the amazing floating leaf of the Otways. It probably won’t drag the crowds in, but I was impressed. A dry leaf, suspended above the track had me seeing things. I’ll be buggered if I could see what was holding it up and I was staring at it from about 2 cm away. Yeah okay, these days I do need a portable Hubble telescope to see things up close, so I may have missed the exact source of the suspension. 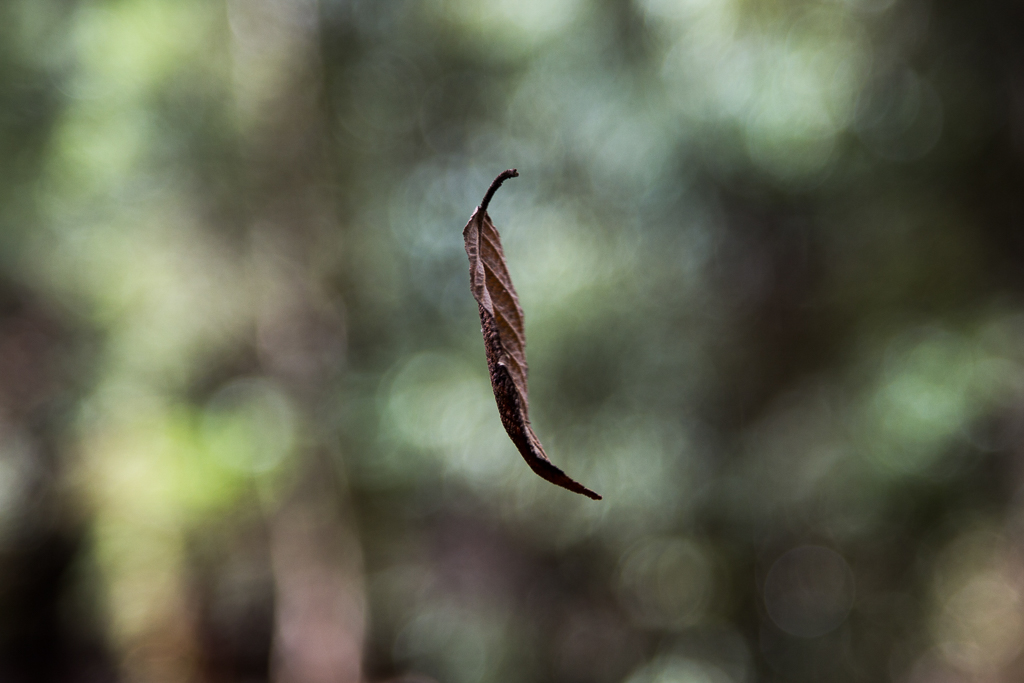 No sooner had I turned away from the magical leaf and I was here (just to clear things up, ‘here’, means on the beach in the next photo, not ‘here’ that I’m lying under your bed with an axe in my hands). Talk about the world’s quickest walk. 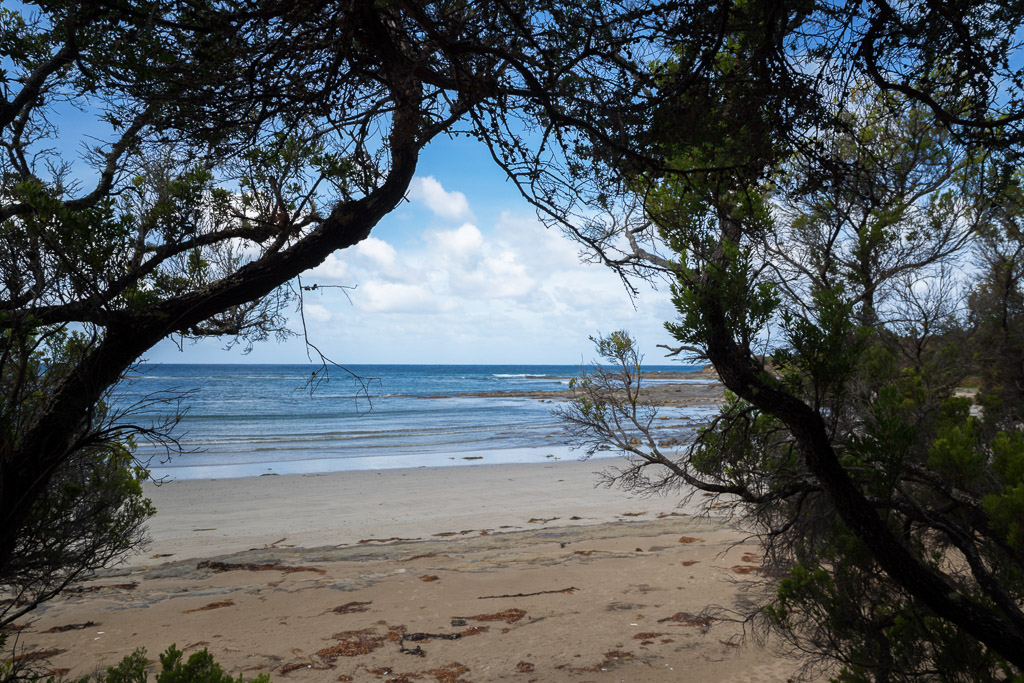 In traditional fashion, we’d arrived at Blanket Bay in the early afternoon. It was time to put the feet up and lounge around, whilst contemplating dinner, which was about a decade away. There is a reason a lot of people skip Elliot Ridge and do the double leg from Apollo Bay. Just be prepared for what happened to me last time. Late in the day I was relaxing on my own, thinking I had the camp to myself. Suddenly, hordes arrived who had muscled their way from Apollo Bay in one hit. When hiking, there’s nothing worse than a big group, as without trying they take over the place. This is exactly what the super-sized group did. It was a traumatic experience.

Anyway, I had time to potter around the beach taking photos. A large piece of flotsam became my target and I cursed not having a proper tripod with me. This is the best I could do in the ‘long exposure stakes’. 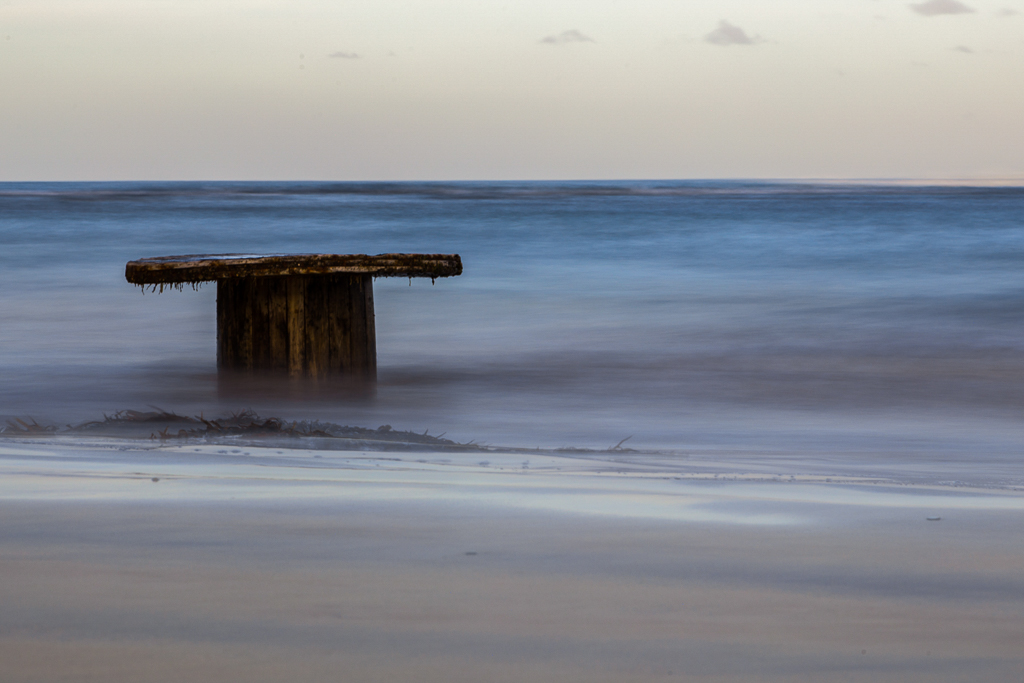 It was all a pretty casual fare with plenty of relaxing going on. I’d hoped to get some nice photos of the waterfall which sits at the back of the camp, but it was dry as a chip, so I was out of luck there. A lone koala sleeping in a nearby tree was of interest, but the big moment of the day was seeing the arrival of the ‘Rotterdam Rockets’. They hadn’t committed suicide after all.

There’s absolutely nothing to say for the rest of the day, other than dinner was chilli con carne and it was mighty tasty. I guess this leaves us with the inaugural plus one more…

Sleep in. Even by taking your time, you’ll find the walk from Elliot Ridge to Blanket Bay will take no more than four hours. There’s nothing wrong with leaving Elliot Ridge at 10 am, as you’ll still have a thousand hours of daylight to spare to make it to the beach.

What else? I found this leg following wide bush roads quite dull, but there’s nothing wrong with it. I’m just a coastal sort of bloke who likes seeing waves and mermaids. I always thought though, this day through the Otways would be perfect for someone who had never walked in Australia before. Towering mountain ash, huge ferns and a lush undergrowth with the occasional wallaby hopping by, would be the quintessential down under walking experience in one hit.

What better way to test my theory, than by asking Harold and Maude what they thought? They’d previously only had limited time in Australia, so I was keen to hear what their opinion was.

I said, “What did you thing of today’s walk?”

“It was kind of boring.”

So there you go. In one hit, he shot my theory down in flames.

Anything else? Just one last thing. The savvy follower of this blog will know I tend to throw in a little map of each walk, which is taken from the GPS and uploaded to Garmin Connect. It gives the elevation, time taken and all sorts of guff. I’m sorry to say, but no more. Garmin have well and truly dakked that application. Essentially, nearly all the maps I’d uploaded in the past are now incorrect, so I spent about three hours the other night deleting them off individual posts. I knew I was in trouble when I checked out the Viking hike and the map displayed was of a stroll around Albert Park Lake, which I’d done after work one day. If you ever need a gpx file of these walks, I can provide them with the only payment being a decent lemon tart. 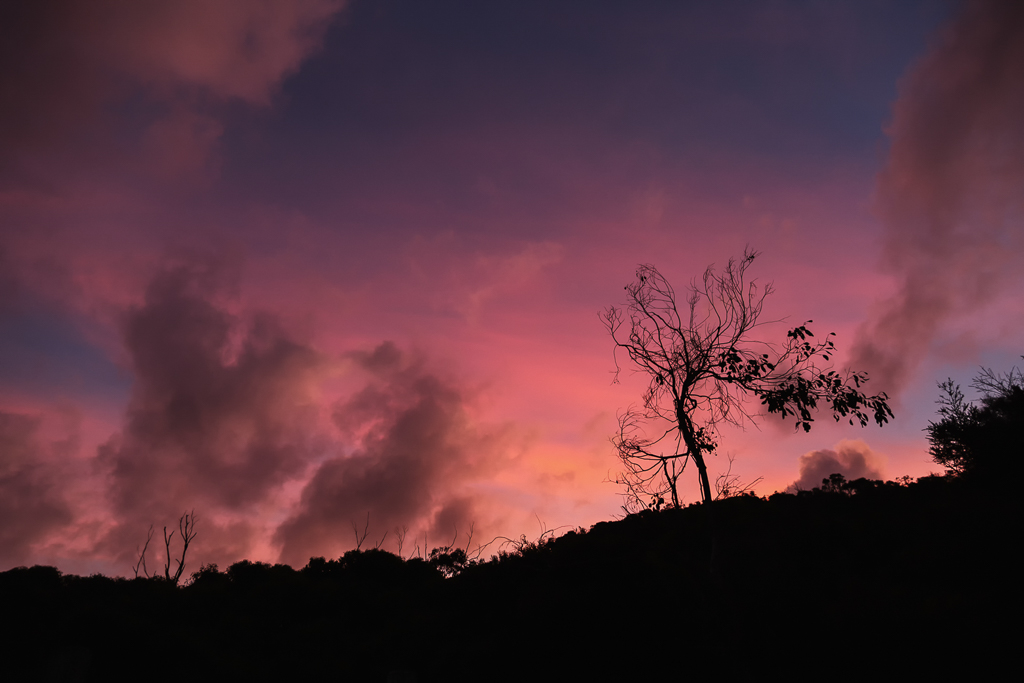