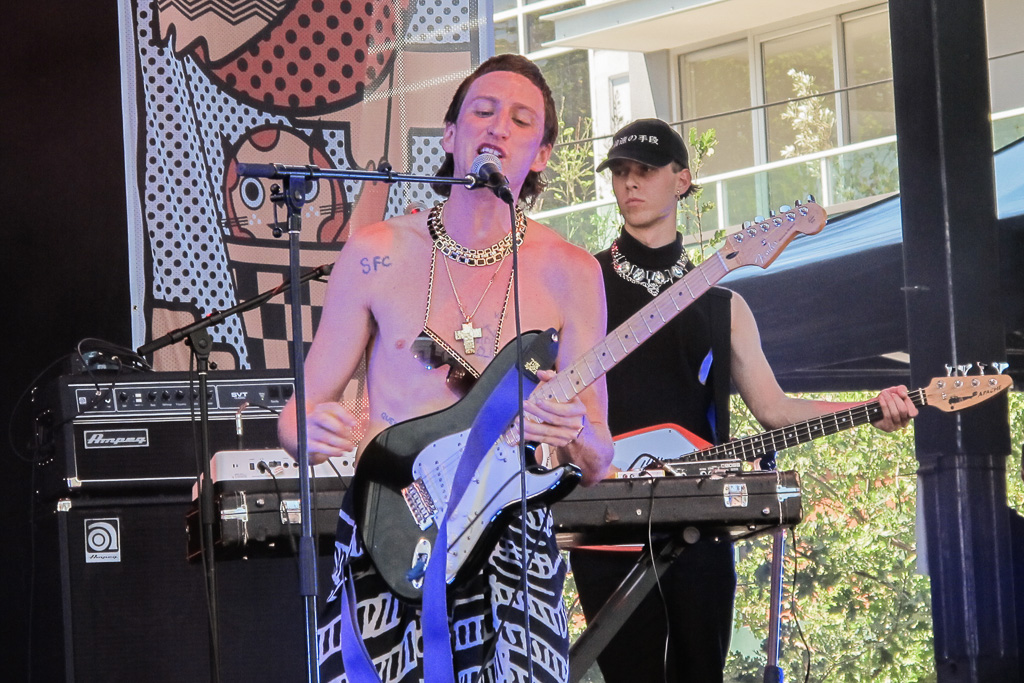 File this post under Hiking Hiatus 101. The dedicated punter will know I haven’t been doing much walking lately until I feel I’m ready to let the dodgy neck out of the bag and face the wilds again. I am contemplating some decent walking next month, but until then I’ll be dabbling in some different entries within these hallowed walls. Oh yeah, it’s a chance to vary things as well. I don’t think anyone wants to read constant trip sojourns, especially me. I need something different now and again to keep my mojo going.

So, here we are and what a weird place it is. Part of my bumming around during summer is to catch up on some live music and what a better place to start than the St Jeromes Laneway Festival, which was held in an interesting location in Footscray on the Maribyrnong River. For starters, the location is refreshing to me. The Maribyrnong River is perceived as a shabby sibling to the publicity whore Yarra River. It’s not such a bad thing though.

As a cave dweller from the western suburbs, I’ve frequently checked out the Maribyrnong, by riding next to it or strolling. One of my favourite spots is where the river slowly passes through Footscray. Urban decay and old factories are always appealing to me. Who doesn’t like long forgotten railway lines leading to nowhere? If you’re looking for a bit of off-beat street cred, then this would be the perfect place for a music festival. Guess what? That’s where St Jeromes was held.

Okay, enough of the guff. What happened? First of all it was forecast to be a stinkin’ hot day. Mm… You know how much I detest the heat, so I was going all out in protective mode. I kid you not, but I wore my long sleeve walking shirt, Buff headwear, wide brimmed hat and a cuben fiber pack complete with water bladder. In other words, I wore full hiking attire. Yeah, I may not have fitted in with the hipster-beard-tattoo-Wayfarer sunglass look, but I wasn’t getting sunburnt in a million years. 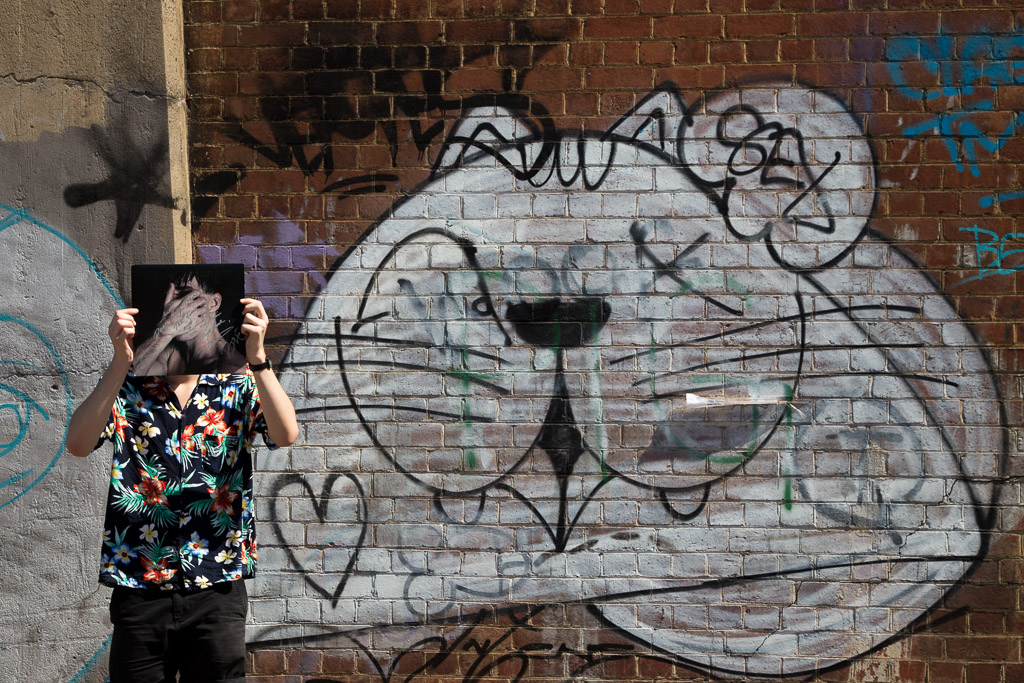 The internet needs another cat.

My compadre for the day was Ben and we hit the security entrance like two titans. As I passed through, the bloke checking ID’s asked for evidence of age. Huh? Surely not me?? Yes, you’re right, it wasn’t you, you fool, but it was someone standing close to me. For a nano-second I thought I could pass for a 17 year old, which was strange, seeing how I’m almost 50 and feel 80, but it was not to be.

The kerfuffle over, it was time to get to business. I had my bands picked out for the day. Cass McCombs, Adalita, Kurt Vile and King Krule. Settling in, the music was playing, but there’s something I’ve noticed recently, which has now reached epidemic proportions amongst live musicians. The roadie onstage. I’m not sure when this started, but now I’m aware, it drives me absolutely mental. Let me explain after a picture of derelict Footscray. 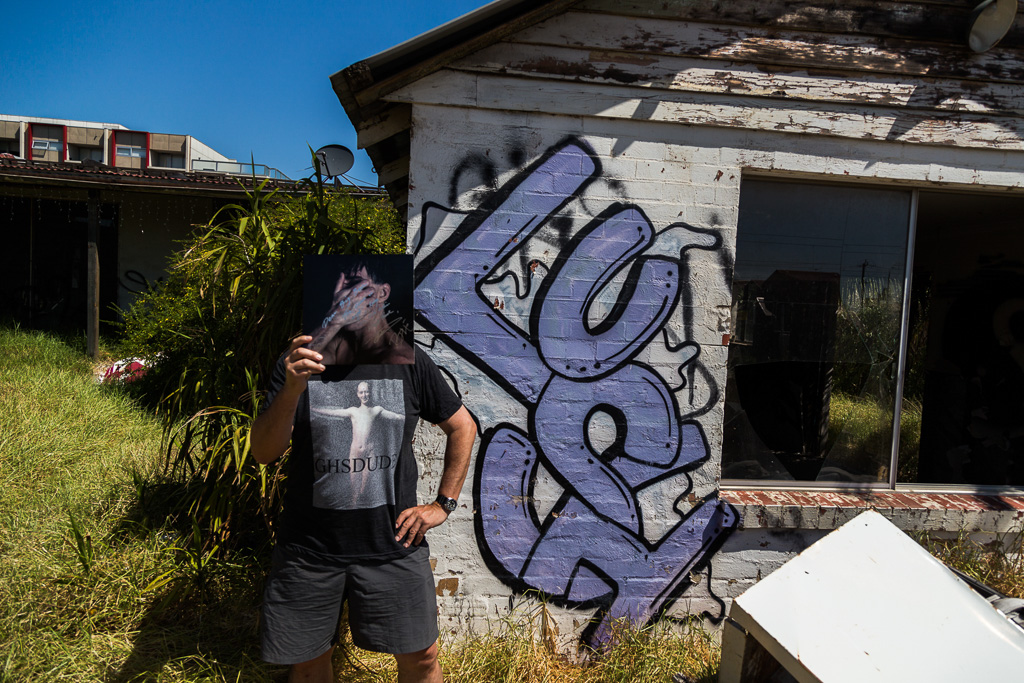 Upon concluding a song, a roadie will wander on stage and hand the guitarists new guitars. He’ll then stroll off, I assume re-tune them and guess what? Yep, in a song or two he’ll be back swapping the guitars over again. Adalita played fine, but the roadie swapped guitars for every song. Maybe I’m in the minority, but I find some bloke strolling across the stage with his nuts hanging out his shorts to be an absolute pain in the arse. Does the punter care if the guitar is out of tune? Bloody hell, I saw Stevie Ray Vaughan and he didn’t change is guitar once. A tinker here and there and off he went again.

There’s nothing I hate more than the clutter of shit on stage or some chump walking backwards and forwards breaking up the action. It breaks up the flow and I’ll never be able to get into the set if the band spends its time indicating levels to the mix man or wanting a new guitar. If I think back to great concerts I’ve seen, then The Clash is tops. Played at the sweat-pit of Festival Hall in summer, they played full throttle, with barely anything on stage and certainly no freak wandering on to switch instruments. Hell, a brawl started in the crowd at the front, so what did Joe Strummer do? Well, he hopped into the crowd of course and broke it up. When he clambered back, his shirt was covered in blood. It was beyond epic. Here, you can see the splashed blood in a picture, which is part of the Fiasco collection. 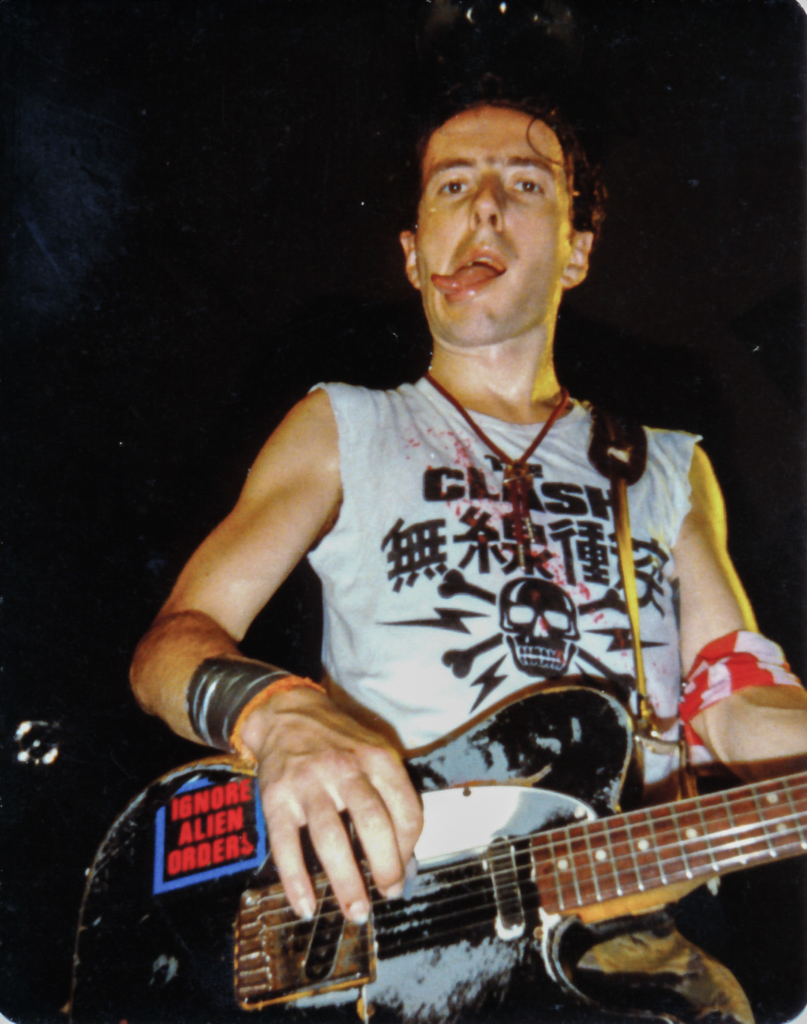 I know this doesn’t concern most people, but to me music has been a big part of my life. It’s always with me, whether to provide solace, fire me up or just to tap the feet to on the train when going to work. When it comes to live shows, I just don’t want a concert. I want to be immersed in it, forget where I am be caught up in the moment. Also, if I can be disturbed or intimidated, then all the better.

So, there I was. As I don’t have many photos from the day, then I’m afraid you’re going to have to put up with some high quality reenactments. Unfortunately for Ben and I, we decided to head out to do this when it was 41° C. Luckily for us though, there was some solid cloud cover to make it a little less brutal. 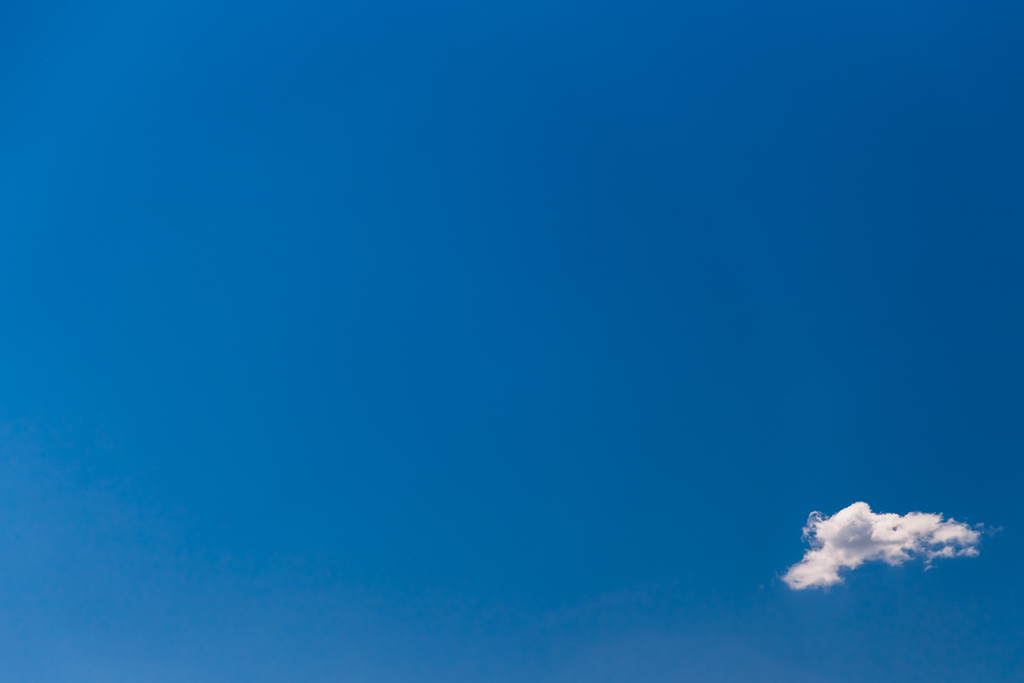 It was a cloudy day

The River Stage was in a great spot, backing onto the umm… river. Cass McCombs had played a laid-back set and here I am watching. Minus the stage, people and the entire festival. 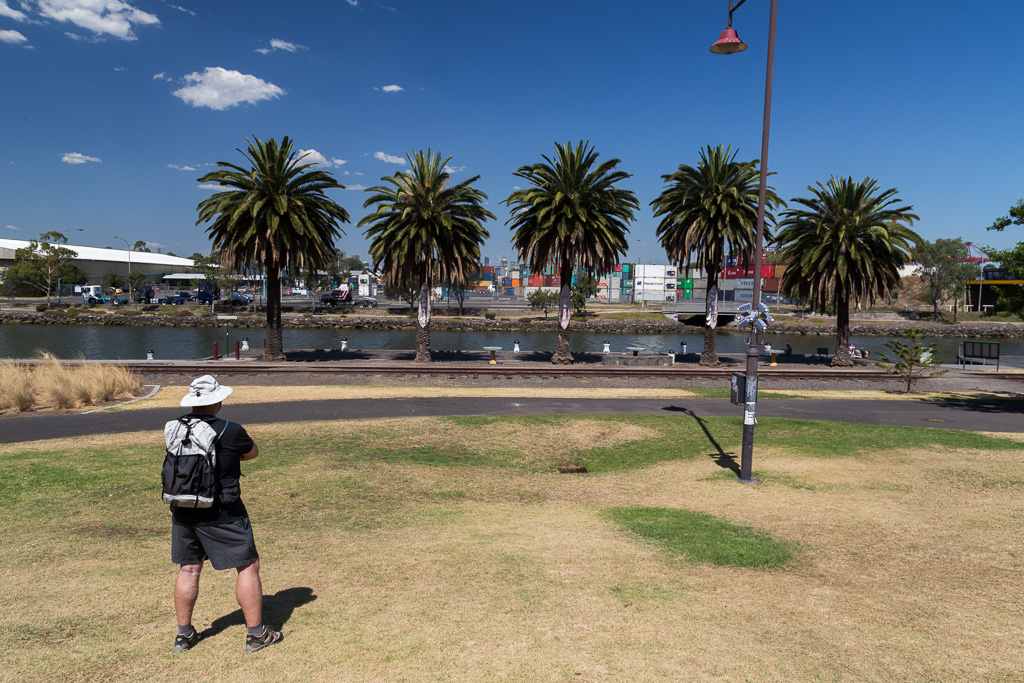 Right. What’s next? Ben had told me to check out Kirin J Callinan, as he’s ‘pretty weird’. Mm… Sounds like it’s right up my alley, so I wandered up. All I did was follow the sound of a screeching guitar being abused and I was near the front of the stage. What did I find? I’ll tell you what, nothing for the rest of the day could match the 40 minutes or so of mayhem I observed.

Here was a bloke in some sort of bizarro, black and white shorts and t-shirt combo. A completely slaughtered haircut consisting of a razor sharp straight snip across the forehead and a semi-mullet. Accompanying this was some well and truly crap looking dangling jewelry, some non-functional sunglasses, that appeared to have been stolen from a Pharaoh and a guitar, which looked like he’d found in the op-shop, with strap held on by duct tape. There was no stage clutter, no roadies and two other band members who played the non-plussed backing musicians to such a stratospheric degree, they looked like they were at an accountants convention. It was magnificent. 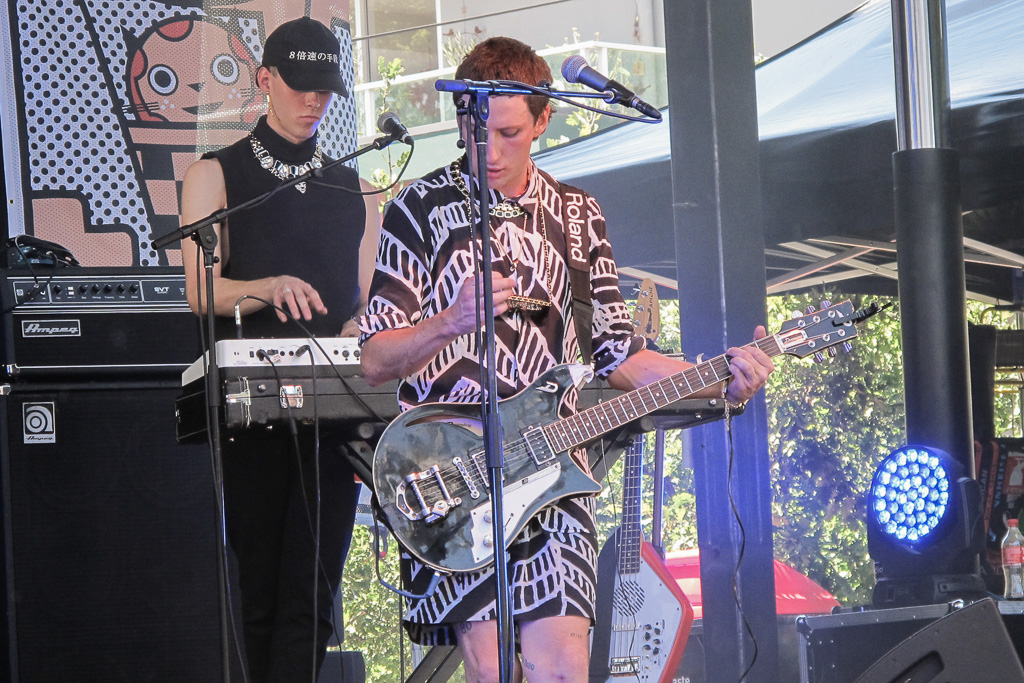 Who needs tuned or multiple instruments? Who needs a flash looking set? This nondescript looking bunch of blokes were unleashing a wave of sound and force, which had me transfixed. Sure there was a guitar change, but it didn’t necessitate a break in the action. Anyway, it was a chance for Kirin’s shirt to come off and there was more enlightenment. A series of home made tattoos were displayed in varying degrees of crapness, with the ultimate one of ‘SPC’ on the shoulder. They were fantastic. Ben spoke to him later and he said it’s because he likes baked beans. Even I won’t fall for that one, but with this Kirin bloke, anything’s on the cards. I’m surprised he stopped at his shorts, as he struck me as a bloke who’d nude-up on cue. 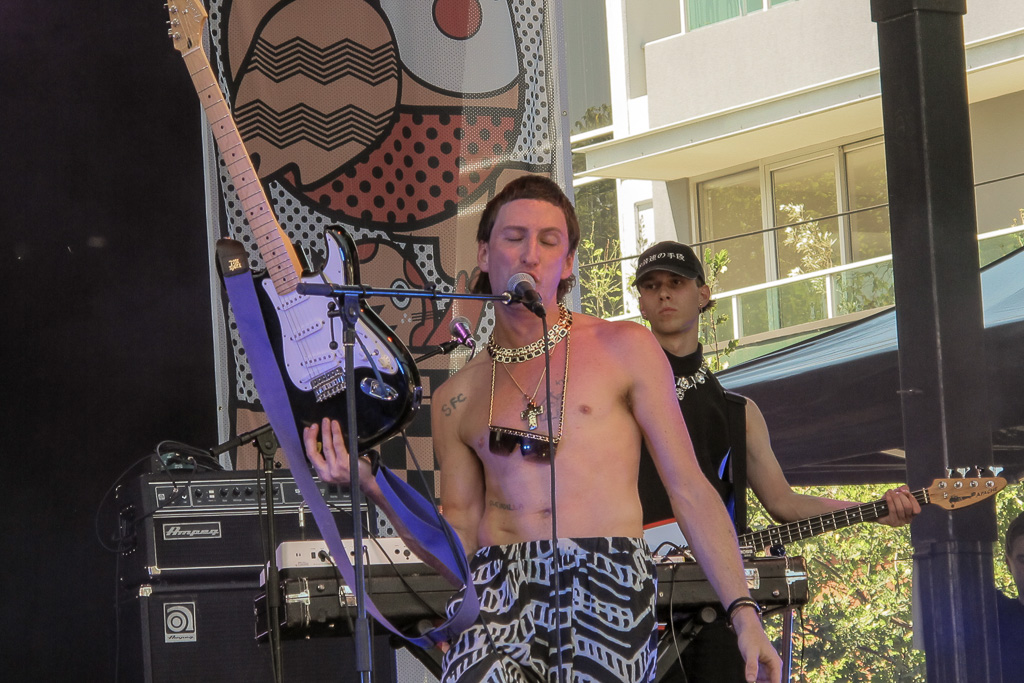 You know what? The whole set was extraordinary and most of all, something I’d never felt with a live performer for years, disturbing. Then it was over, but I was hooked. Nothing else for the rest of the day compared in intensity. For me this was the performance and really, I could have gone home, as no one else would reach those heights.

I was dazed, but carried on. Ticking off bands and returning to the River Stage later in the day… 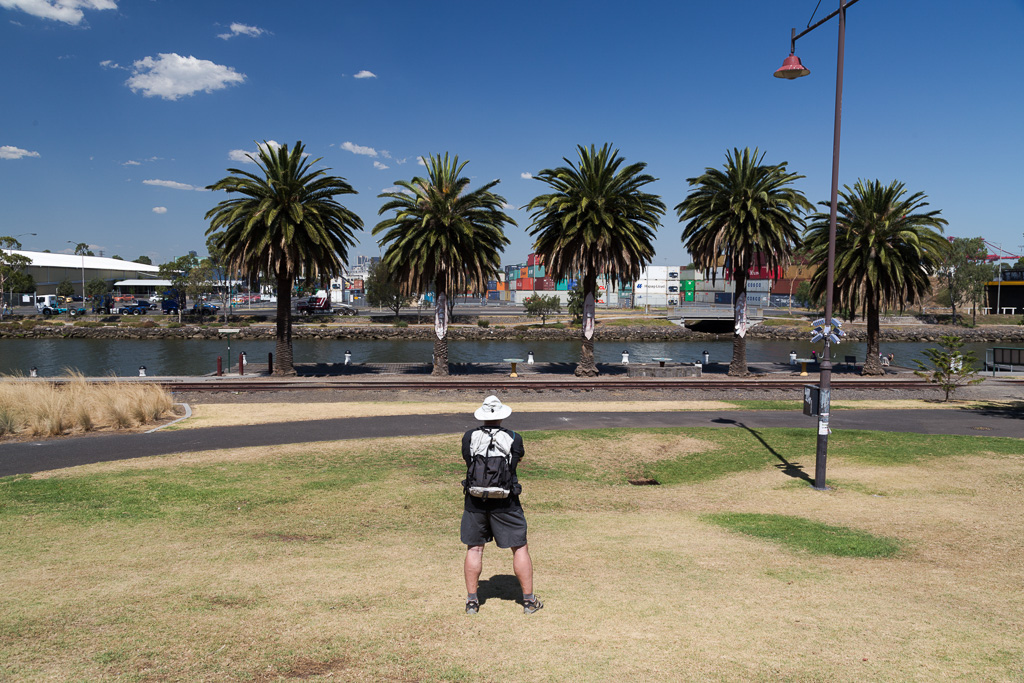 …to watch Kurt Vile. He was one of the main reasons I was there, but even he couldn’t compare to the aural onslaught I’d experienced a few hours earlier. Plus I rarely saw his face, as his hair has its own personality. 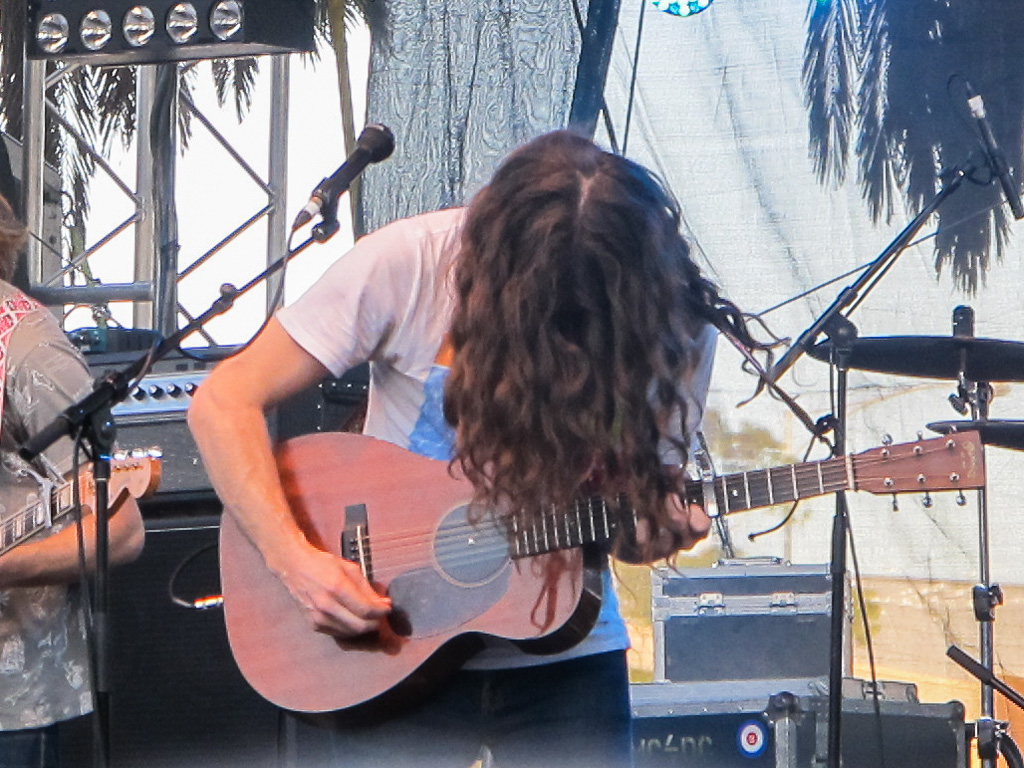 Kurt Vile. Behind the mane.

The night rolled by and it was over, but I couldn’t get the manic set of Callinan out of my mind. Ben caught up with him and had a record signed. Without prompting, he continued to perform flawlessly, by writing, ‘Dear Big Ben. The time is nigh, keep on tick tockin’. High Time.’ More than worthy for the record collection. 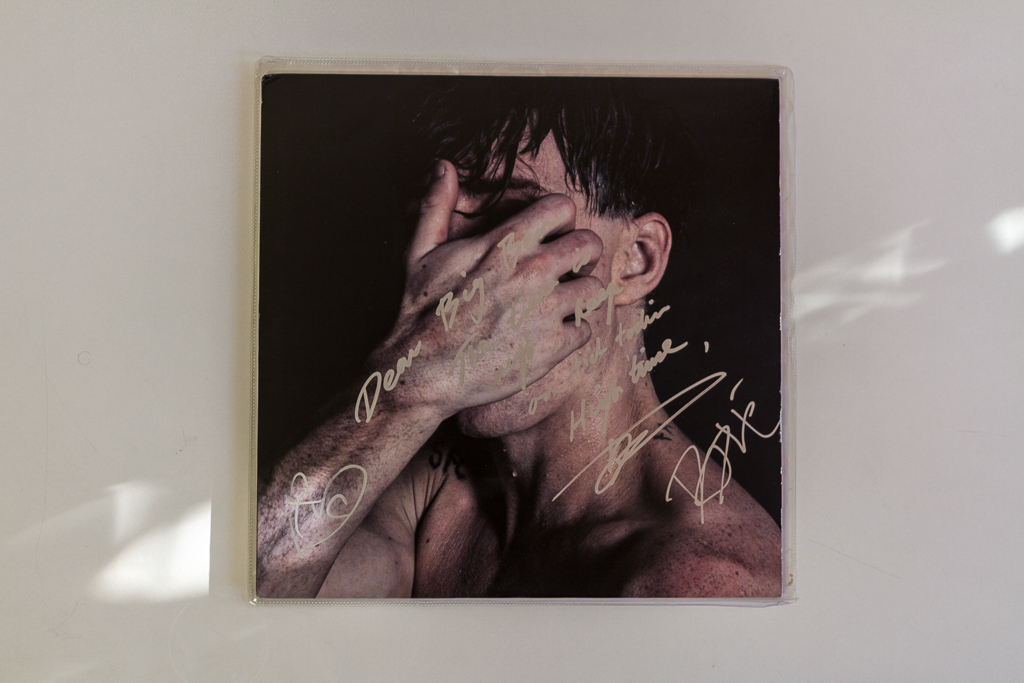 What next? Not a lot, but before I wrap up, there’s one thing about the western suburbs. It has its fair share of weird graffiti. There’s the off-beat… 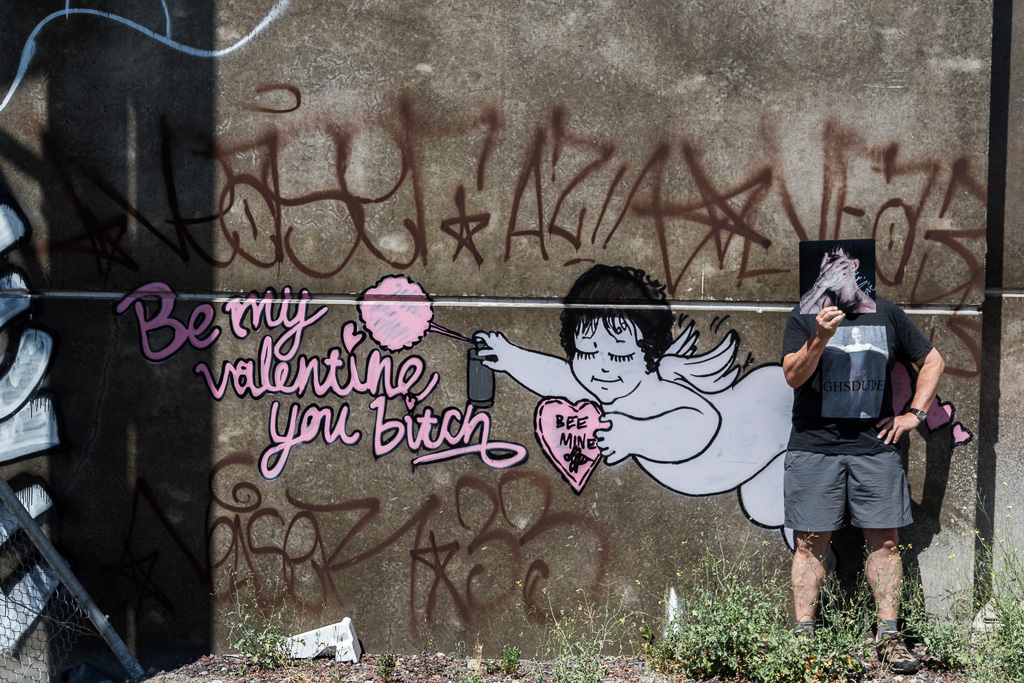 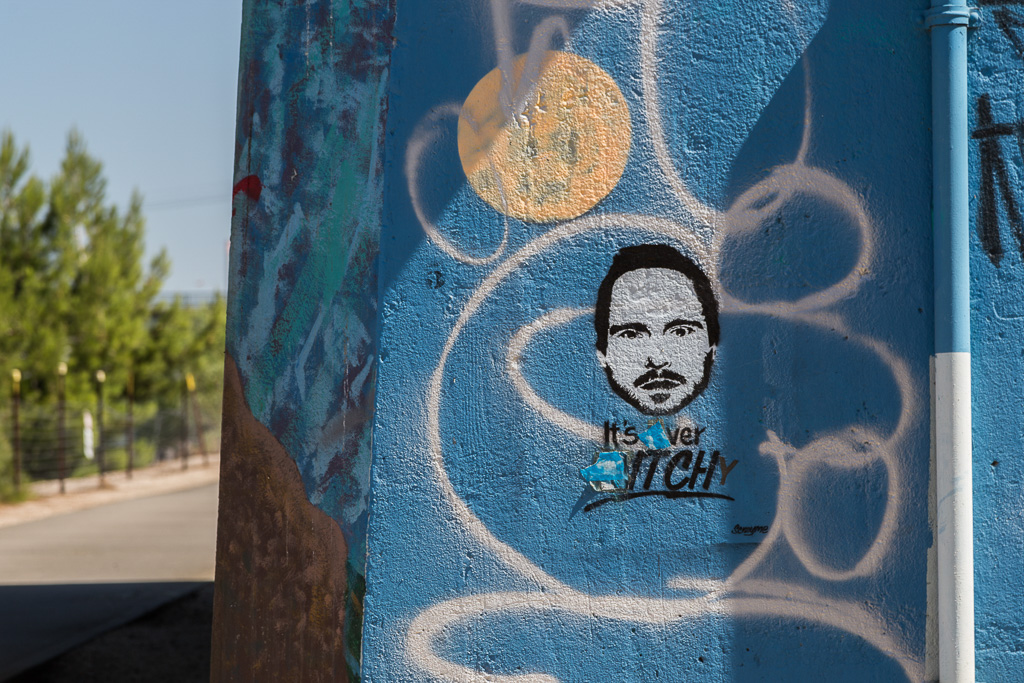 …and topped off with a bit of random poetry. 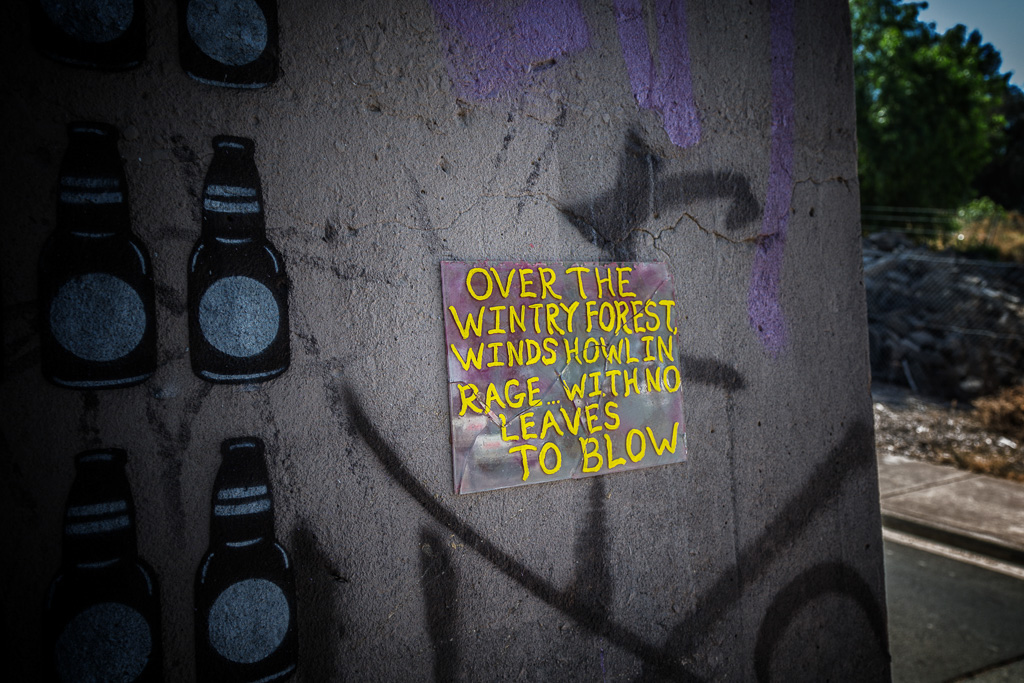 All overseen by a light-pole of fake cameras. 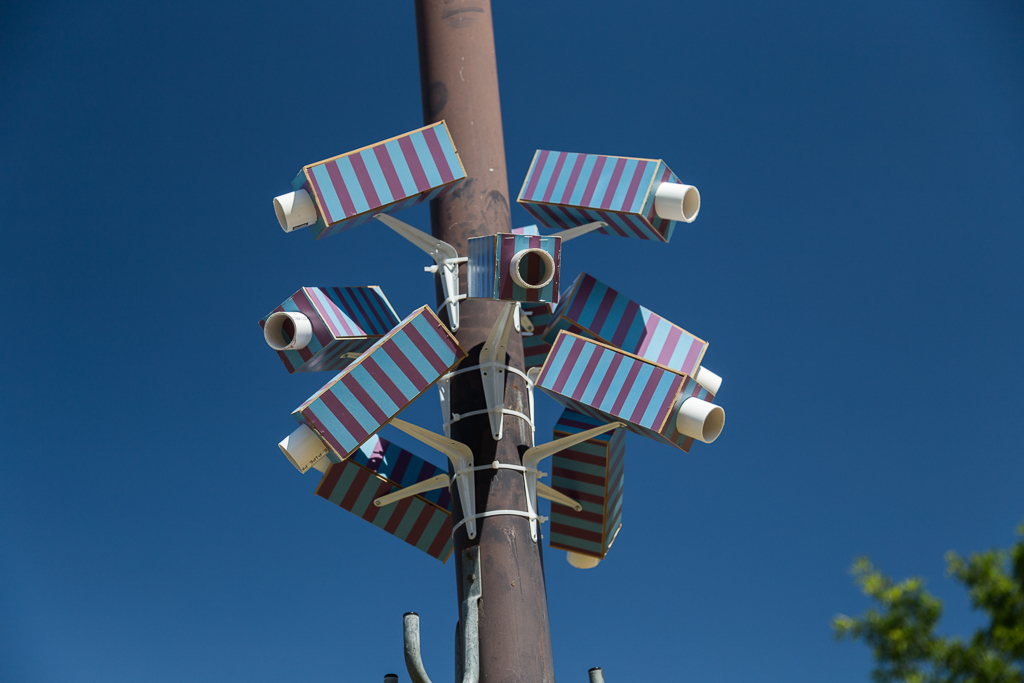 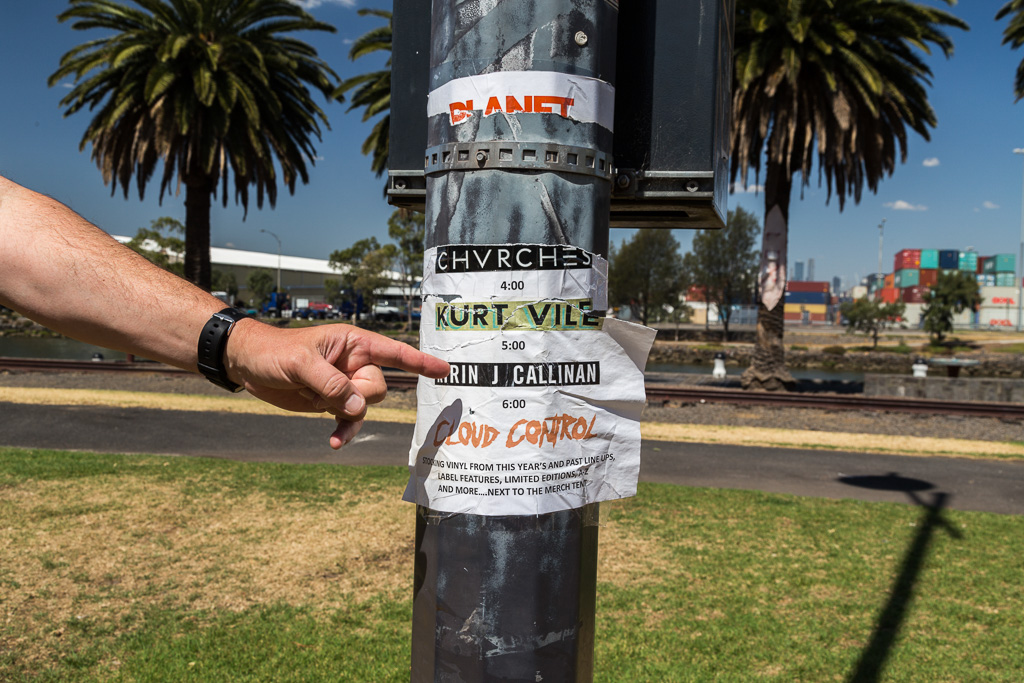 …but, in concluding, the bloke to keep an eye on if you like your music odd is Kirin J Callinan. Sound scapes of weirdness and an undefinable genre. One minute it’s industrial and the next it’s soaring choruses. From gutturul to tender and sometimes all at once.

If you want alternative, he’s got it in spades and you’ve only got to watch the film clip for ‘Way II War’ as an example. Why is he in underpants and why do they need a belt? That’s only part of it. Topped off with side-zip boots (which he just happened to wear at St Jeromes) and combined with about a million GIF’s makes a compelling case of something to keep an eye on.

Oh yeah, don’t think I haven’t neglected the hiking. The clip looks like it’s filmed in the Blue Mountains. Makes the bizarre even better.