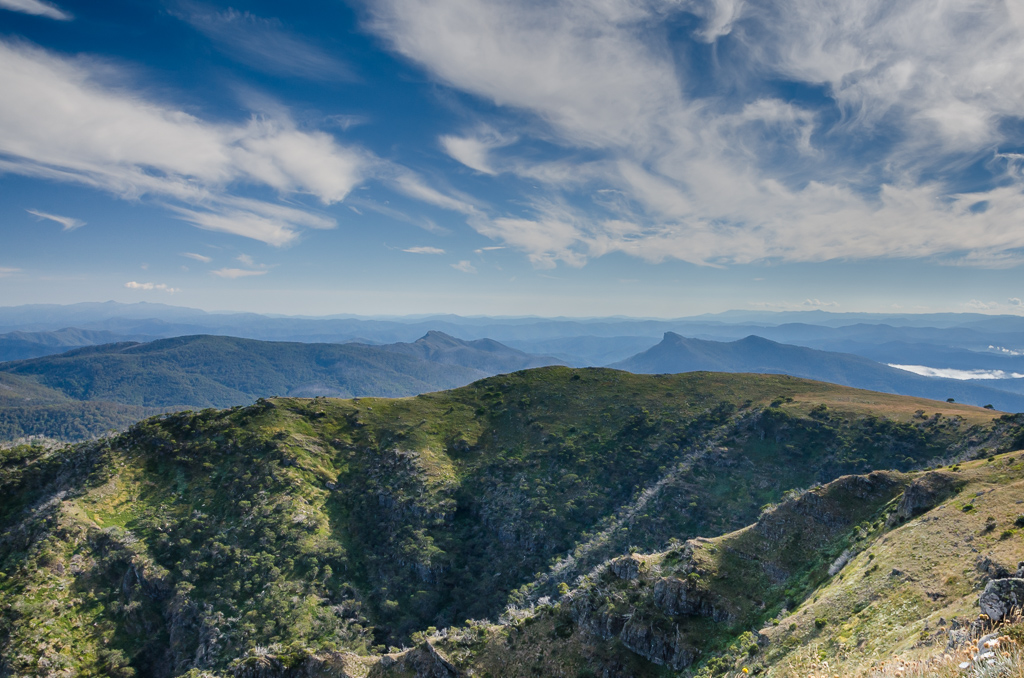 In the last post, I detailed how much suffering went on during the climb up Helicopter Spur. Upon arrival at my elected camping area, the only bonus about feeling exhausted and listless was I had a new tent with me, which took about 2 minutes to put up. In that regard, I couldn’t complain about my new Lightheart SoLong 6 shelter.

Besides being quick to erect, I also found out it’s a breeze to relocate as well. 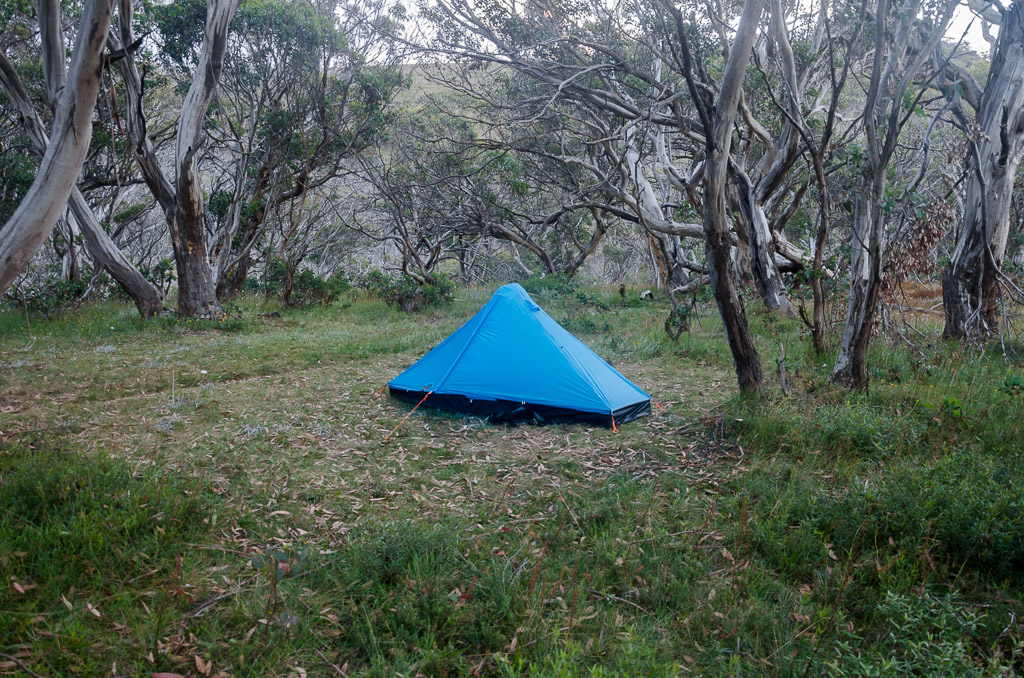 I’d just erected it and as I stood back to indulge in some new shelter admiration, I happened to look up. Unfortunately, I hadn’t noticed a huge tree branch suspended directly above the tent. What’s even worse is the piece of wood was dangling vertically. I think the only reason it hadn’t already plunged to the ground like a spear, is it was jammed against another branch. Are you kidding me?

It looked sort of secure, but knowing my luck the wind would pick up and it would come plummeting down through my stomach whilst I was sleeping. Definitely a Dracula set up for sure. Well, I wouldn’t be able to sleep with the ‘Branch of Damocles’ above my head so I moved the tent. Lucky it takes less than five minutes to erect, so it was no big problem. Lesson? Look up before erecting the tent. 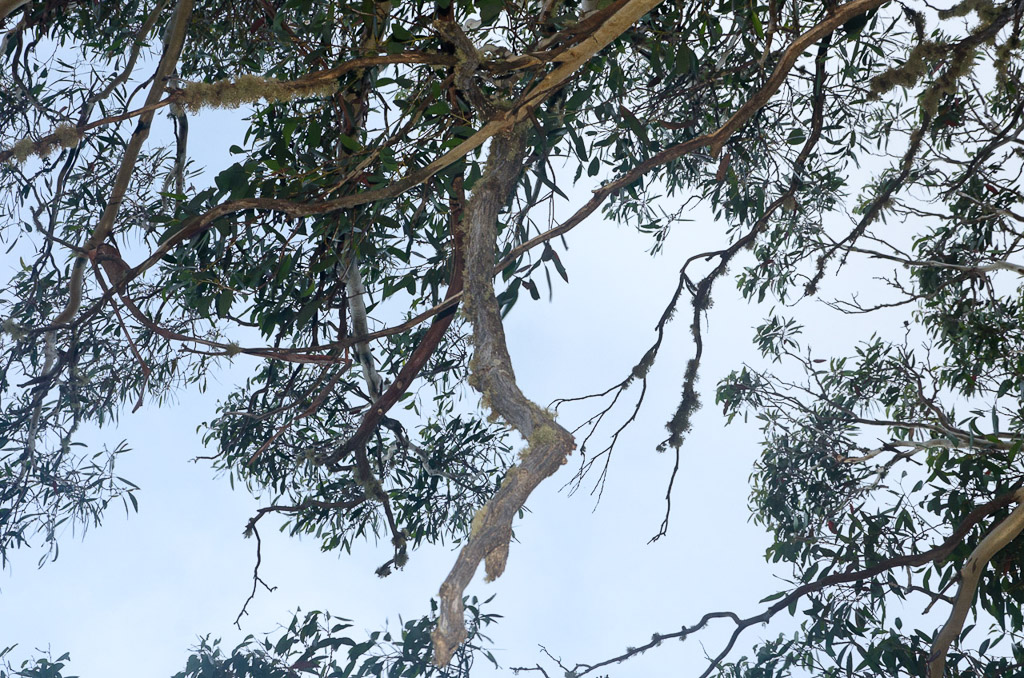 The wind had started to pick up when I went to bed and it was noticeably chilly. With the trees creaking around me I thought the best thing I should do when darkness fell is read about a murder in the area, which is detailed in the ‘Buller-Howitt Alpine Area’ map I was carrying. The Wonnangatta Murders just happen to be unsolved which is ideal bedside reading material whilst sleeping out in the bush on my own. I can’t say I was too worried though, as the murders were in 1917 and the chances of the murderer loitering around me at night would be pretty slim. If he was about, I’m sure I’d hear his walking frame anyway before he did much harm.

The map is quite descriptive in the murderous events and I was taking in the sobering writing until I read the line,

“…partially decomposed body of Barclay near a creek bed. Barclay’s hat had been forced between his buttocks…”

Hang on? Did I just read that correctly? I’m not sure what that has got to do with the crime, other than allude to the reader the murderer was a kinkster? I really couldn’t take it too seriously after reading that and I thought of the scenario, “You know what Barclay? I’m going to force your hat up your arse!” Strange days indeed back in 1917.

I slept okay and in the morning the wind had completely dropped. I considered what I was going to do for the next days walk and in the end I just elected to head back. I’d continue on to the 1742 metre, Mt Howitt, Alpine National Park and then return to Upper Howqua Camping Area via Howitt Spur. It was a bit of a wimp effort, considering my ambitious plans the day before, but I was low on mojo. My shoulders were pretty sore for some reason and I was carrying way too much stuff. I seem to get sucked into carrying lots of gear because the area is ‘alpine’. I do need to alter that thinking.

The weather was perfect and I set off with my destination for the day being Mount Howitt. There was a bit of uphill walking to come as the Australian Alpine Walking Track sidles past Big Hill. Yeah, they must have been short of ideas when they thought of that name. 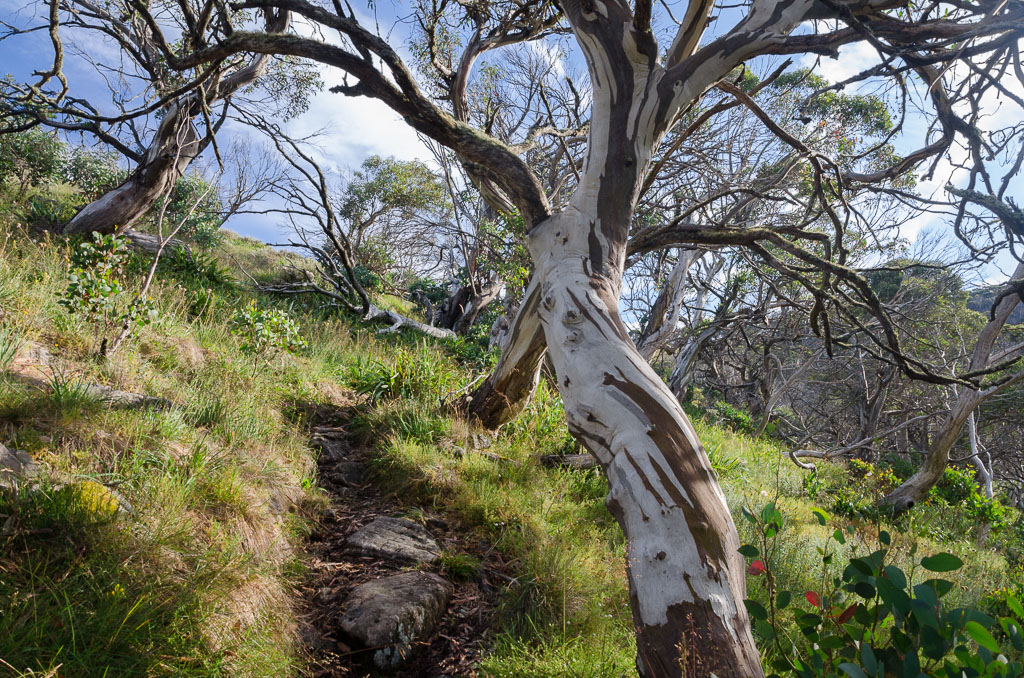 As I slowly chugged up the side of Big Hill I did come across some nice lookout positions. With gaps in the rocks there was a great view back towards Mt Magdala and beyond. 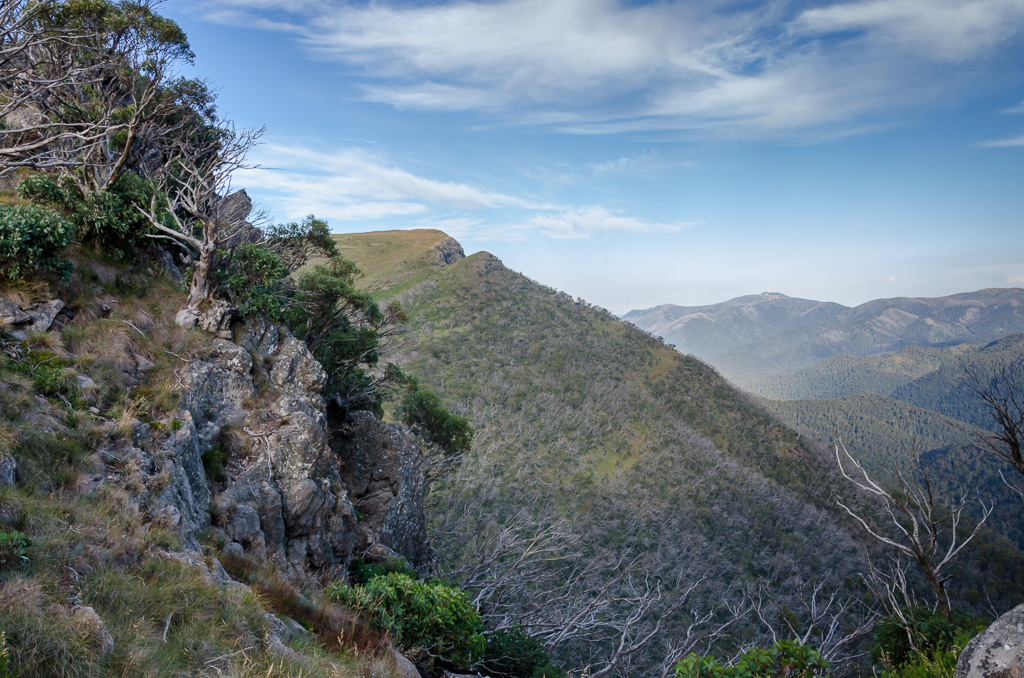 Although uphill, the walking was pretty straightforward and with the sun in my face it was time to get the polarizer out. I’d barely used it the day before and did you think I could go a day without colossal contrasting pictures? Sorry, but it’s my modus operandi to sit back after a hike and wallow in the contrast after I’ve taken the photos off the camera. 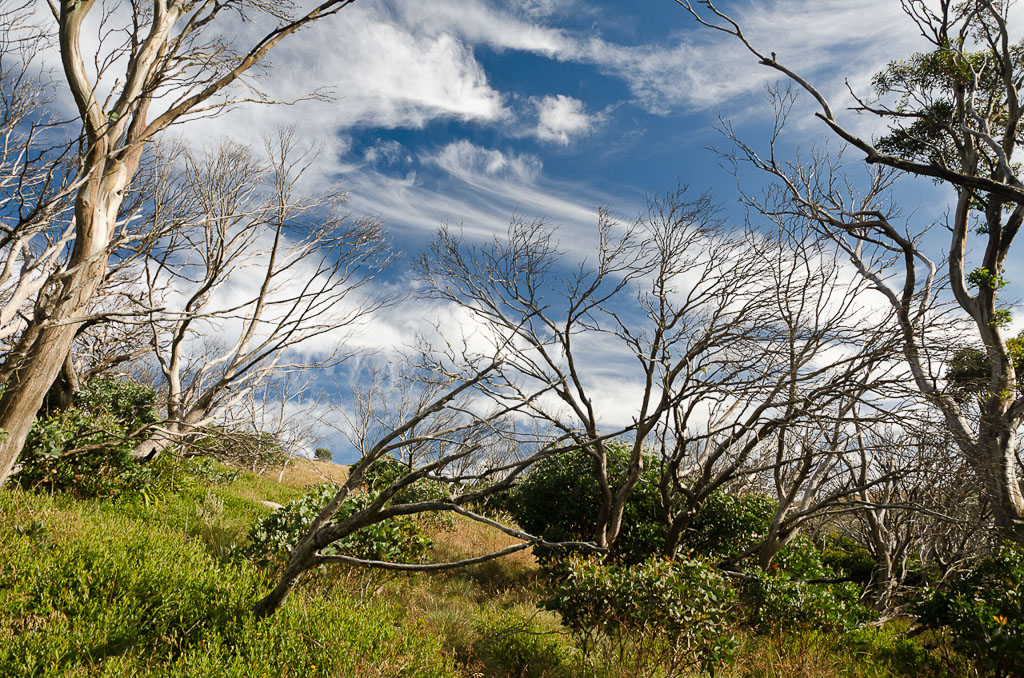 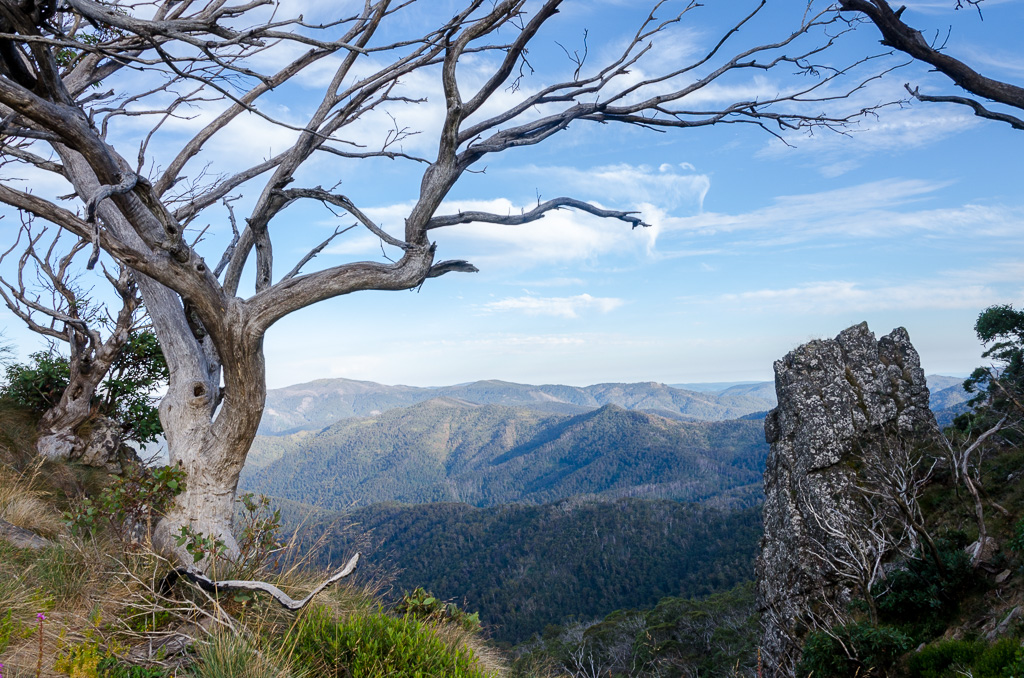 At about this point, any ideas I had about walking somewhere else for the day went out the window. It was all uphill and I was starting to curse the infernal leaden pack dragging me down. There’s one thing though when feeling the pinch. My face tends to point straight at the ground, which has a benefit of checking out the insects on the track. 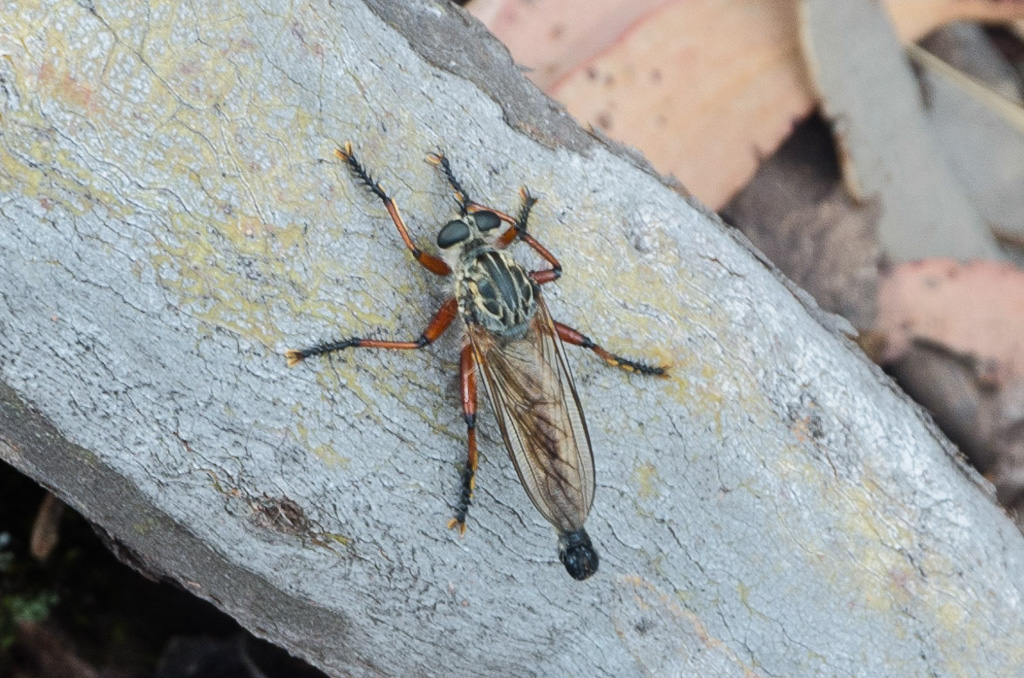 There were some nice cobwebs on the way as well and the one below looked quite nice in the early morning light. I’m not sure where the spider was though, I guess he was taking a break from web duty. 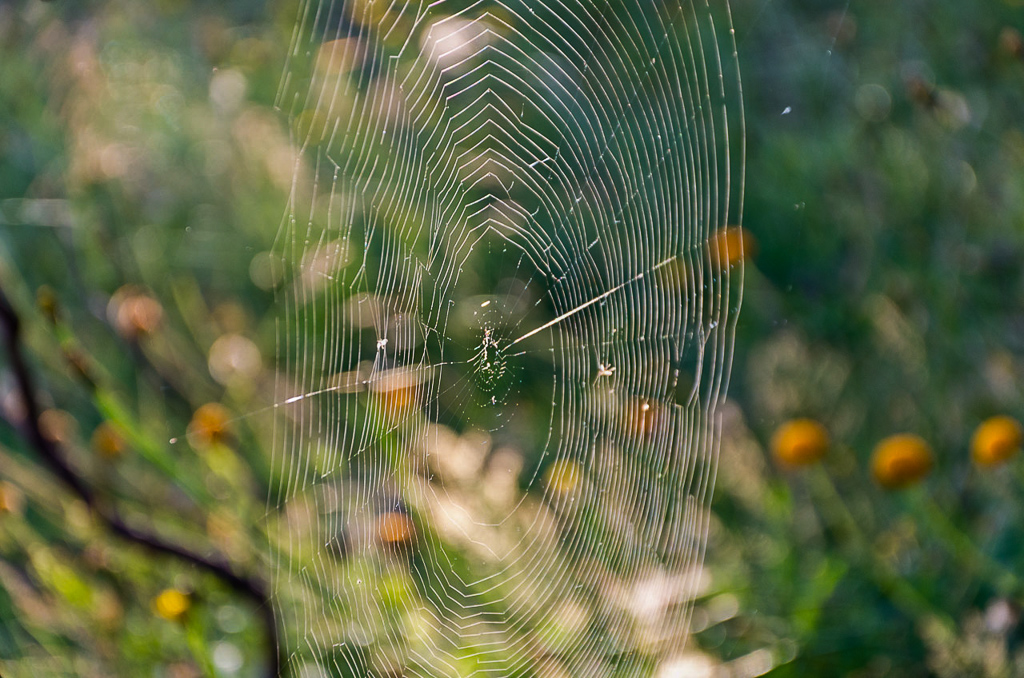 Mount Howitt was in my sights now, as I strolled across some open ground before the final uphill section. 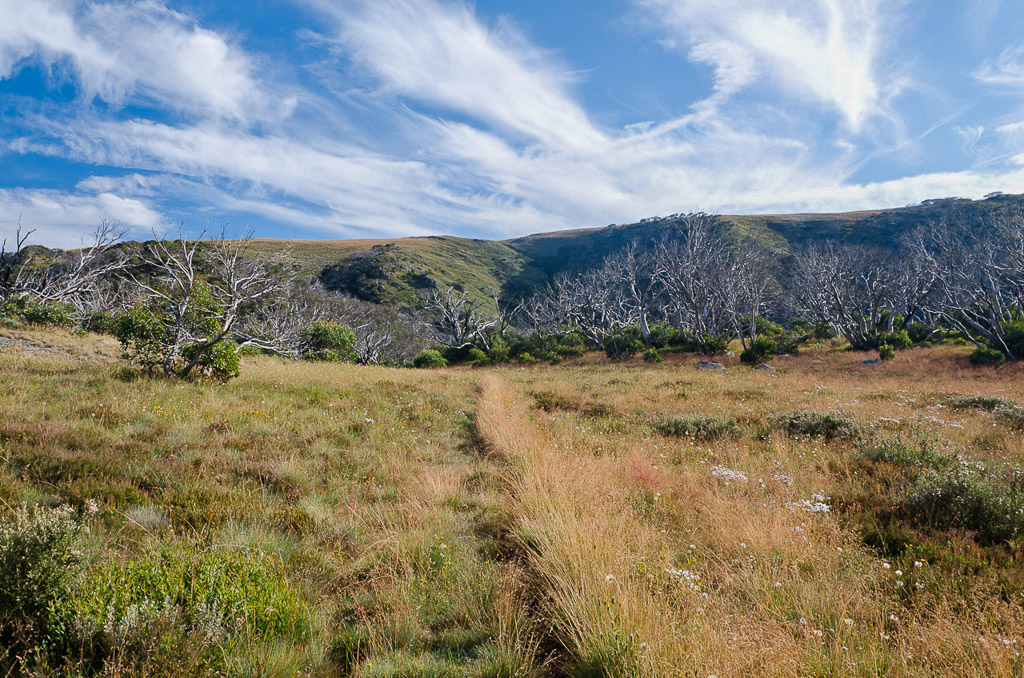 A short section through some trees and then the top of the ridge was in sight. The sky made for some nice shots, as it loomed above me. 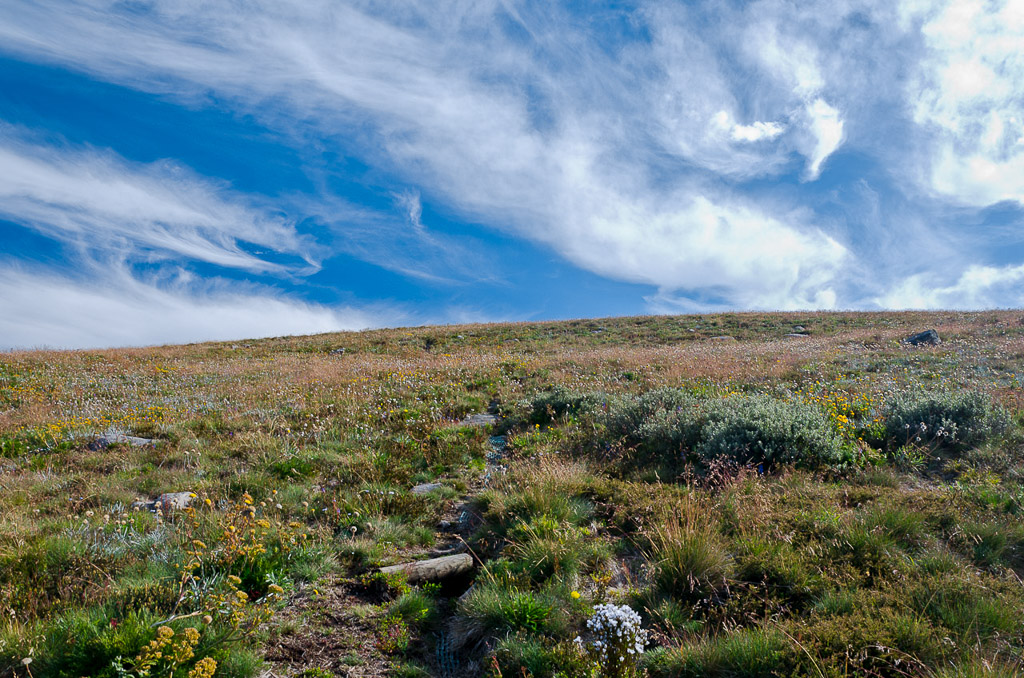 Then at last the ground began to level out. I found the turn off to the Howqua Feeder Track and with the Mount Howitt summit about 400 metres away, I elected to drop the pack and enjoy a bit of freedom for a change. There’s a rock cairn and flattened sign, which I guess is there to indicate the turn off. 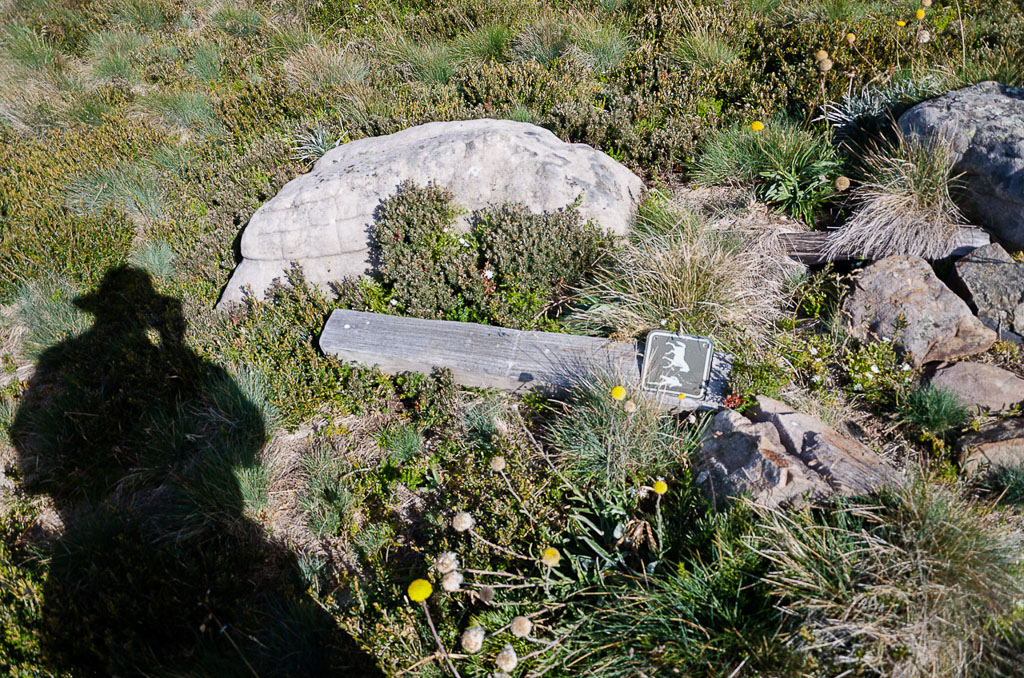 As I strolled up to the Mount Howitt summit I noticed a burnt whistle lying on the ground. I’ve no idea how that came about to be in the middle of the track, but I collected it for my ‘odd finds whilst hiking’ collection. 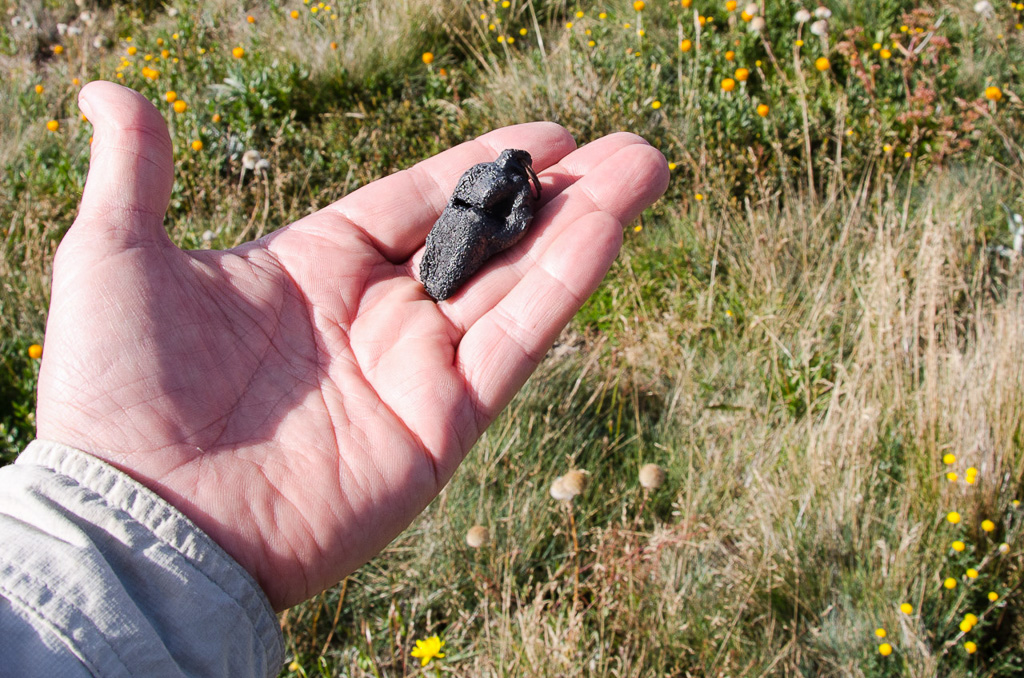 A bit more walking and I reached the survey marker indicating the Mount Howitt summit. At 1742 metres it’s a reasonable sized mountain by Australian standards, but the main thing it has is the incredible view.

On this clear morning, the Crosscut Saw ridgeline was a fantastic sight, although the sun in my face made for some problematic photo opportunities. The Viking which was the destination of my intended trip was clear to see, along with clouds in a brilliant blue haze below. 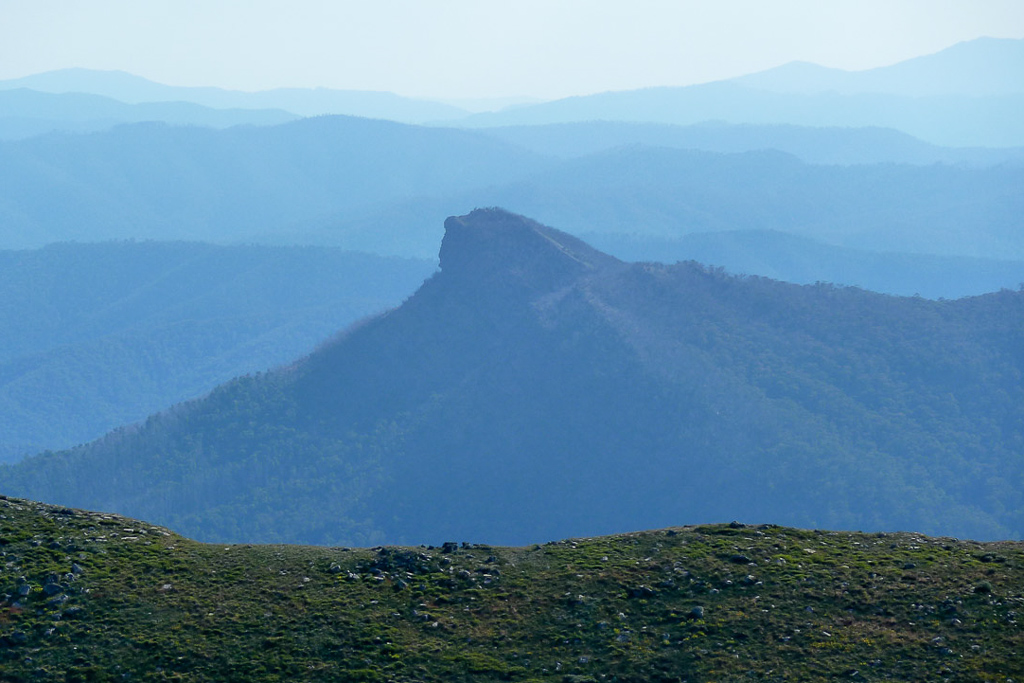 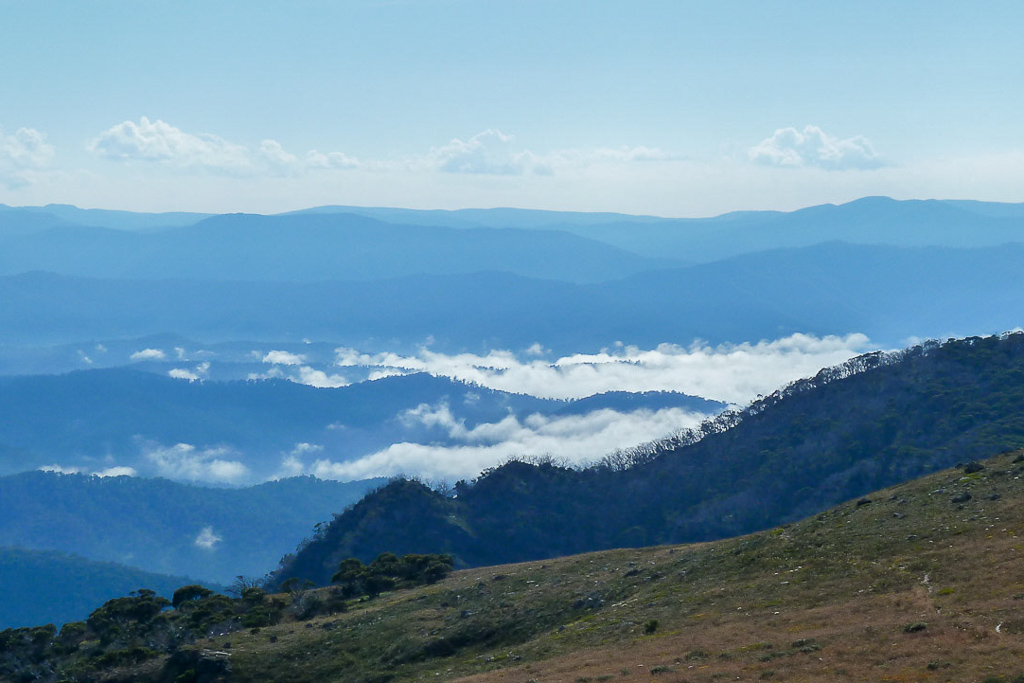 I spent quite a lot of time on top of Mount Howitt enjoying a slight breeze, which was perfect for cooling me down after the previous hours uphill climb. 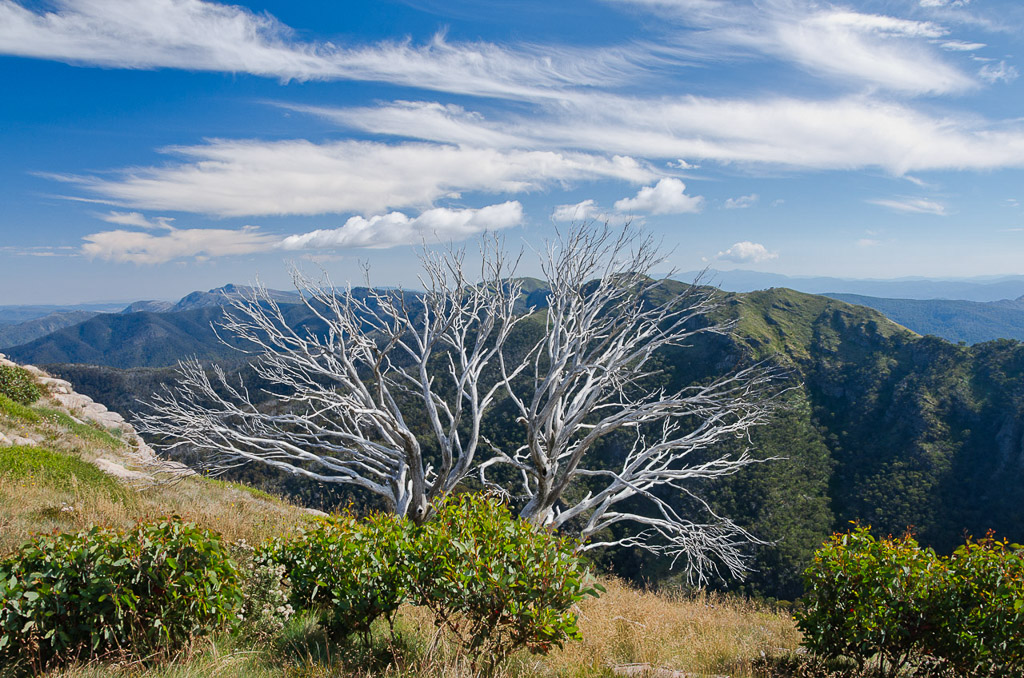 So, that was it for me and it was time to collect the pack and head down. I was at the top of the Howqua Feeder Track with my car only eight kilometres away, so I was off.

I’d descended this track once before a few years ago and it’s a doddle compared to any of the other spurs in the area. Initially it passes over West Peak at 1725 metres and at first it looks like the track comes to a sheer drop. That’s a bit of an illusion though, as the track initially zig-zags steeply, dropping height quickly, before becoming a straightforward descent. 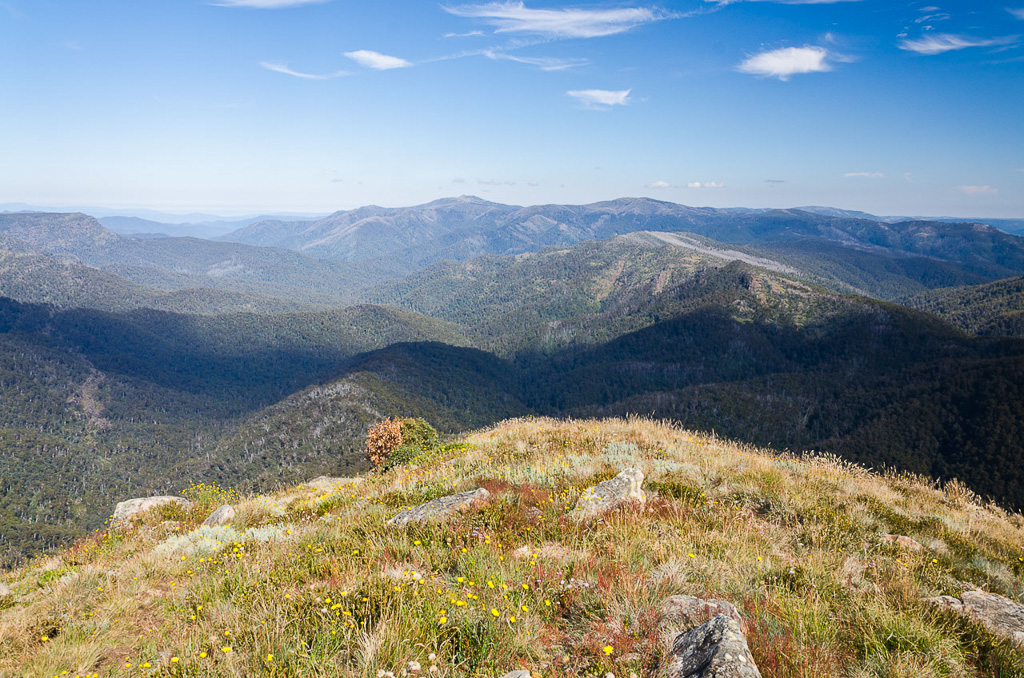 The good part is the upper section before the trees close in and the humidity climbs. There are some nice views of Mount Magdala and Hells Window through the trees. 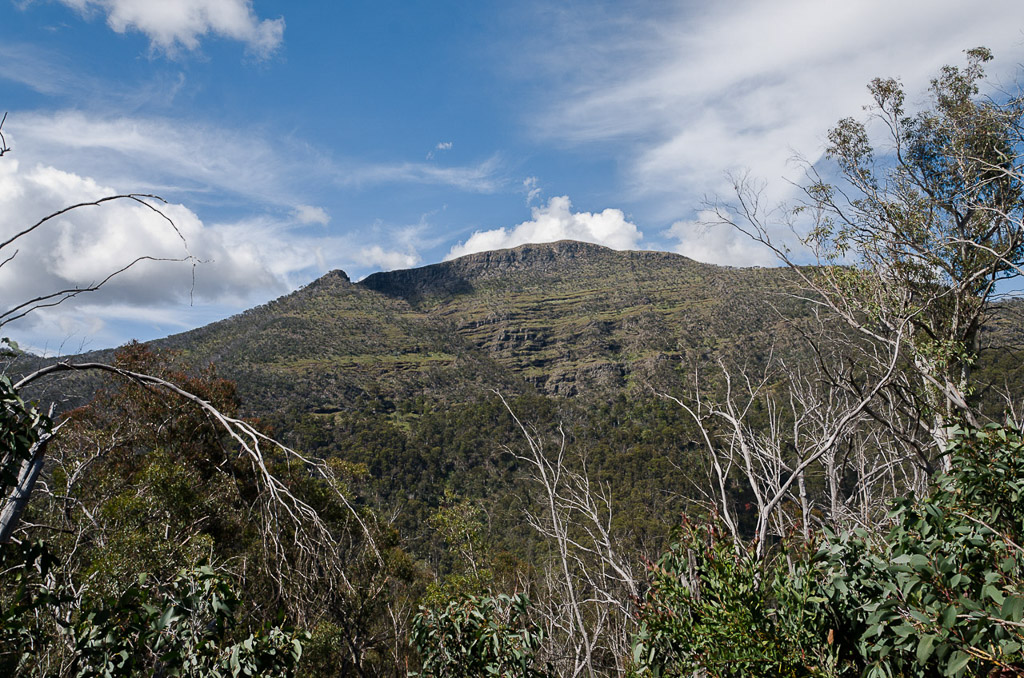 A large group of Crimson Rosellas flew about me and I reckon I took about twenty photos in order to get one good picture. Aim camera, click shutter as bird flies away was the standard fare. I haven’t taken so many photos of empty branches for quite some time. I eventually captured a juvenile who stood long enough for a reasonable photo. Yeah okay, there’s a branch in the way, but it was the best I could do. 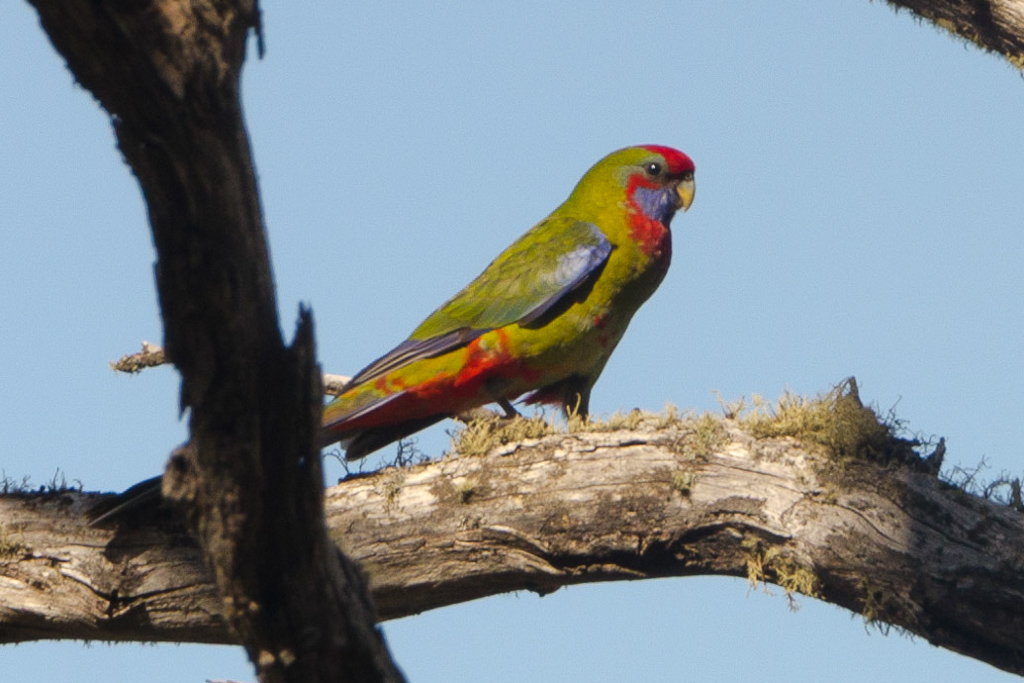 I also noticed the odd tree with large groups of caterpillars on them. I should go to Google and find out what they are, but I’m sure someone has the answer and they can tell me. 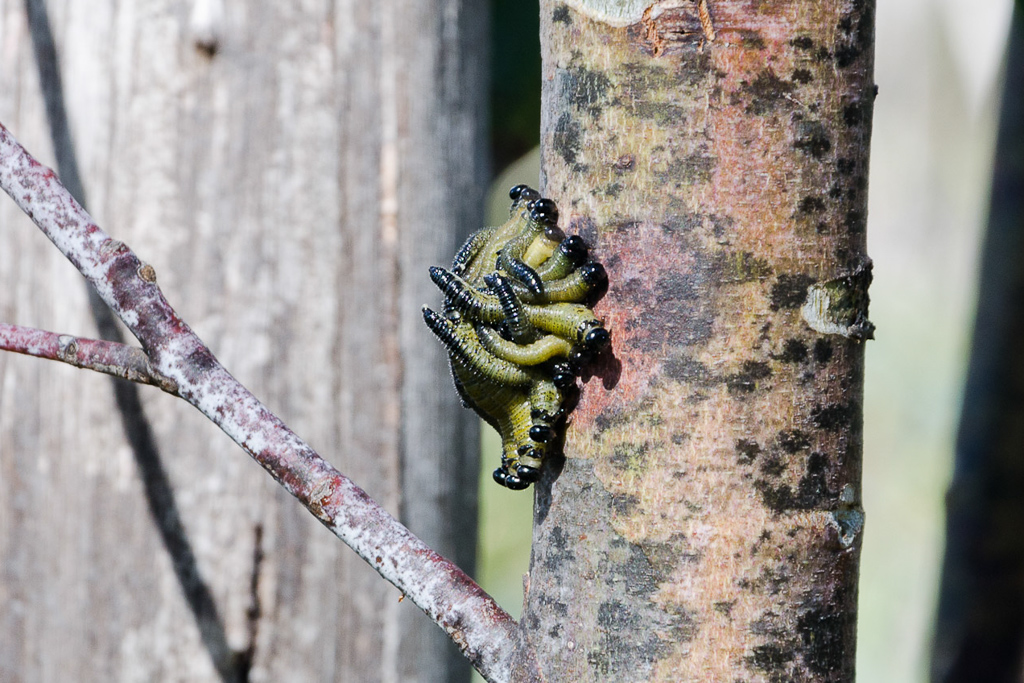 The one thing that drove me nuts on the way down though was the flies. No March flies on this occasion, but plain old bush flies that were in swarms. I think I know the reason and that’s because I’ve never seen so much horse crap on a track before.  There was stacks of it, with swarms of flies lifting off the ground as I approached. It’s also nice when some of those flies then land on your face and lips and you ponder where they’ve been. 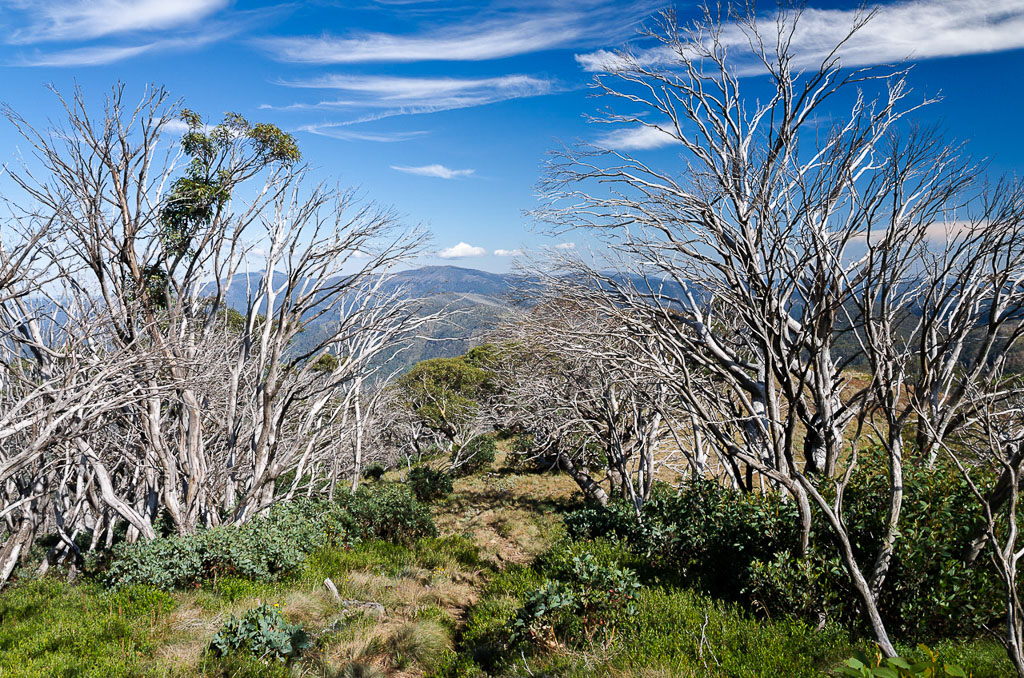 That was really about it, as the track descended into forest and I quickly made my way down to the Howqua River with only a handful of kilometres to go. The last time I was in the area the Howqua was quite sedate, but the floods of the previous year had really changed it. It appeared sections had re-routed and even the Upper Howqua camping area is not really accessible due to flood damage. I had parked outside the camp the previous evening.

I would include a photo or two of the river, but the pictures were so plain I don’t think they suit displaying in this new ‘massive photo’ method on the blog. 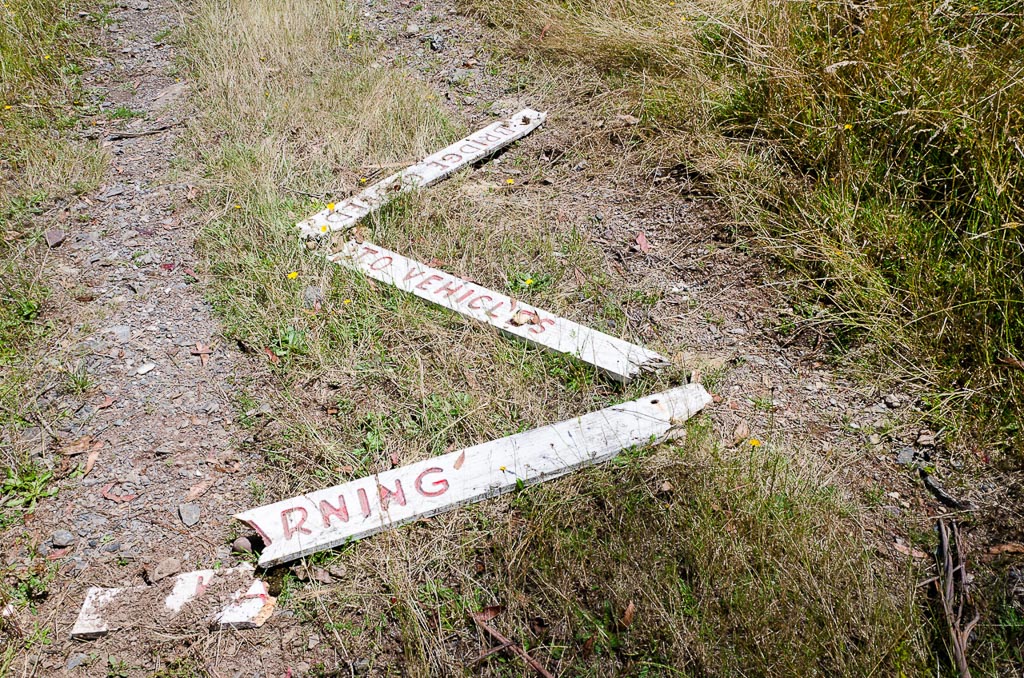 The last few kilometres were flat walking and before I knew it I was back at the car and throwing that small house of a pack to the ground in joy. Remember, “I’m never taking a ton of crap out hiking ever again”. I made sure I repeated that a hundred times before I drove off.

The walk is fantastic, but not in a million years could I finish it in one day. Well, I’m talking daylight as I’ve finished many a walk under headlamp, but that’s never ideal, What’s even better about the two days though is I saw exactly no one. Hiking without anyone around is always ideal, except if one is lying on a track with a broken leg I suppose, but that’s why we carry Personal Locater Beacons (PLB) right?

The final days was slightly longer at 13.03 km, but the total elevation climbed was a far more respectable 272 metres. There you go. What’s next? 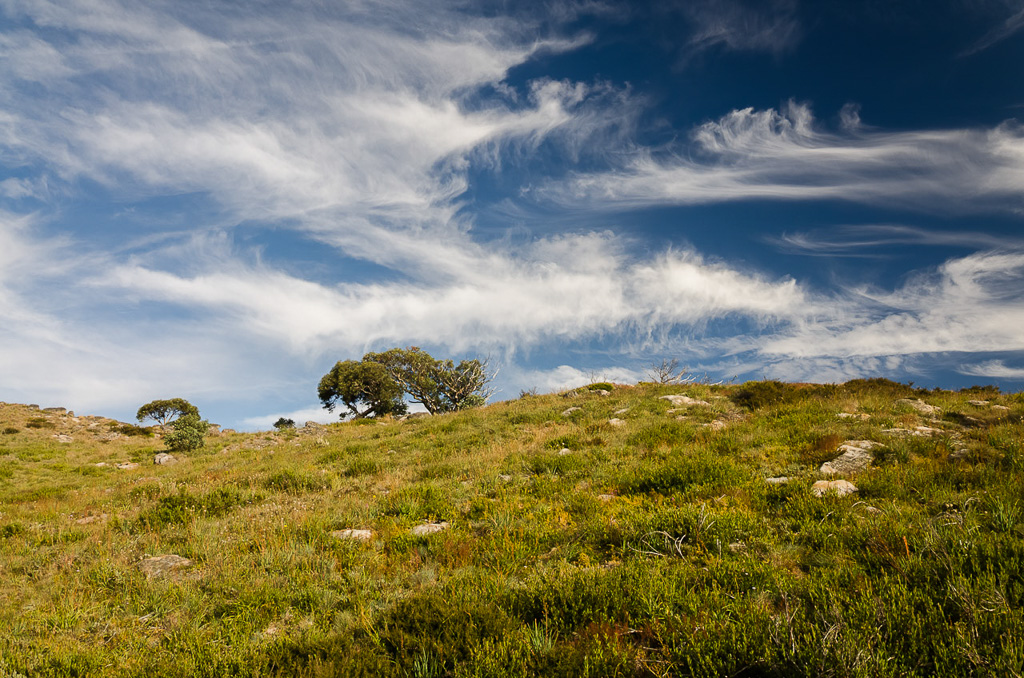