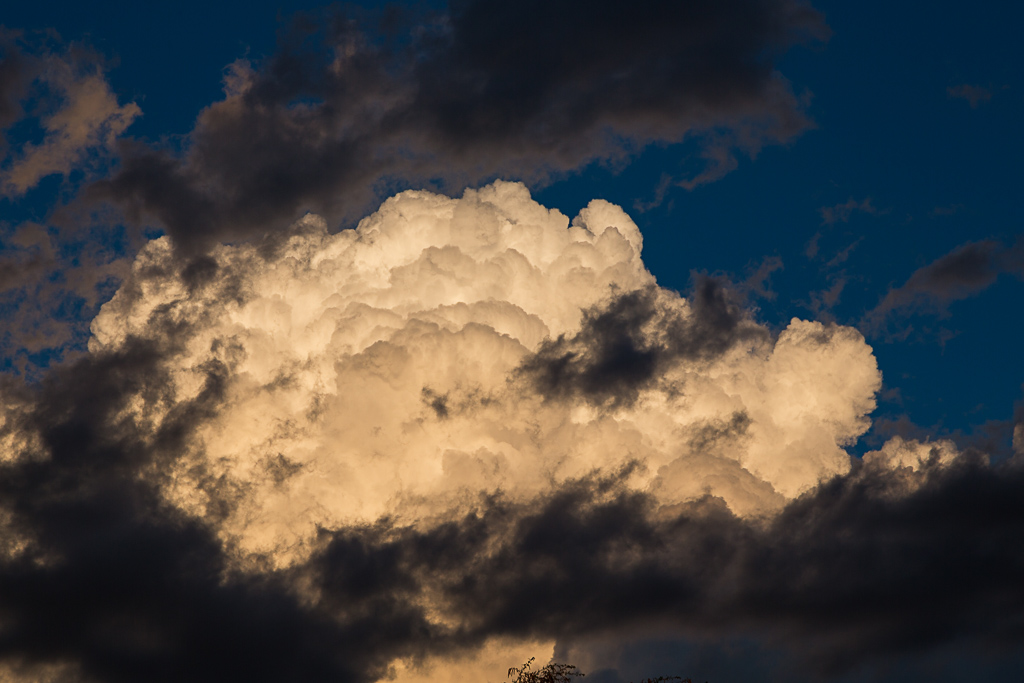 Do you like the cumulus cloud? I have to make an admission though. It has no relation to this post, as I only took it the other day. At home. Late afternoon, I peered outside and saw a full strength, fluffy cloud right in front of me, so I wandered outside and took the photo from the front yard. Luckily, I didn’t have to get kitted up, as my interior clothing is no different to my standard photography outfit. A t-shirt that appears to have been used as a sail on the Kon-Tiki, tracksuit pants circa 1946 and a pair of ankle-high ugg boots.

Anyway, back to the hike. At 17 km, Little River Camp to Old Mill Camp, Burchell Trail in the Brisbane Ranges National Park is the longest leg of this three day walk. Then again, all is not how it first appears. At Little River Camp, there’s a sign saying, ‘Old Mill 17 km 6 hours’. I’m mentioning this for a reason, so remember it and I’ll come back to it later.

The previous evening, I’d set up at Little River under sunny skies, which had a hint of warmth about them. It was August though, so once the evening set in, a cold night ensued. Yet again, I fought a losing battle with condensation in the tent. With not a breath of wind, it felt quite oppressive, so I got up a few times and attempted to reduce the clammy interior. Eventually, I surrendered, as no amount of opening doors or vents seemed to help. I considered holding my breath for about six hours, as I’m sure that would have helped, but I was concerned that I’d wake up dead in the morning. Don’t you hate it when that happens? Anyway, my failure made more sense in daylight. If you compare my campsite photo from the previous post, you can see a slight difference. The entire area was cloaked in mist. 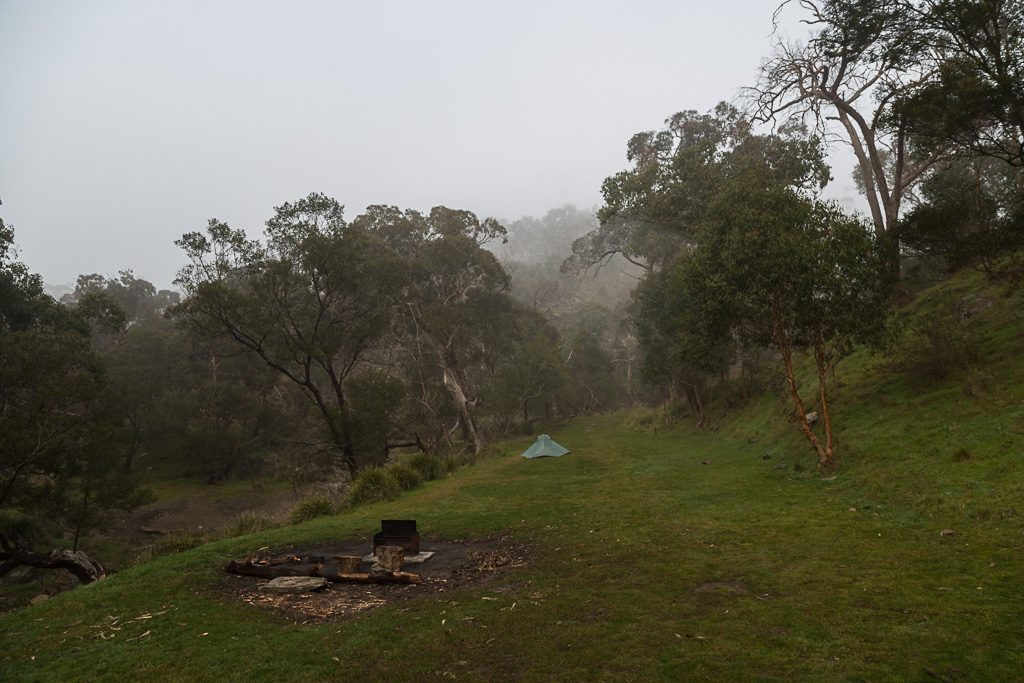 It was chilly, but there was no way I’d move a little quicker and pack up early. I had an idea of what was to come, as I’d done parts of this leg as day walks in the past. No, the sign said six hours, so I aimed to leave at 10 am and use up every bit of the time Parks Vic advises. If I wandered into my destination at 4 pm, there would still be a few hours of daylight left to set up and eat.

On any hike, I’m the Grandmaster of taking time in the morning. On this occasion, I spent two hours having breakfast and packing up the tent. If you’re wondering how this could take so long, don’t expect an answer, as I’ve got no idea. Somehow it was 7.30 am and the next it was 10, as I finally put the pack on.

I was looking forward to these initial steps as well. I hadn’t walked this section alongside Little River, so there was a bit of anticipation. Although tempered with the thought I might be in for an ankle-twisting time on the rocky river bed. The track led away from the camp and straight onto the river bank. Oh, just in case you’ve forgotten, there’s the sign I mentioned earlier. 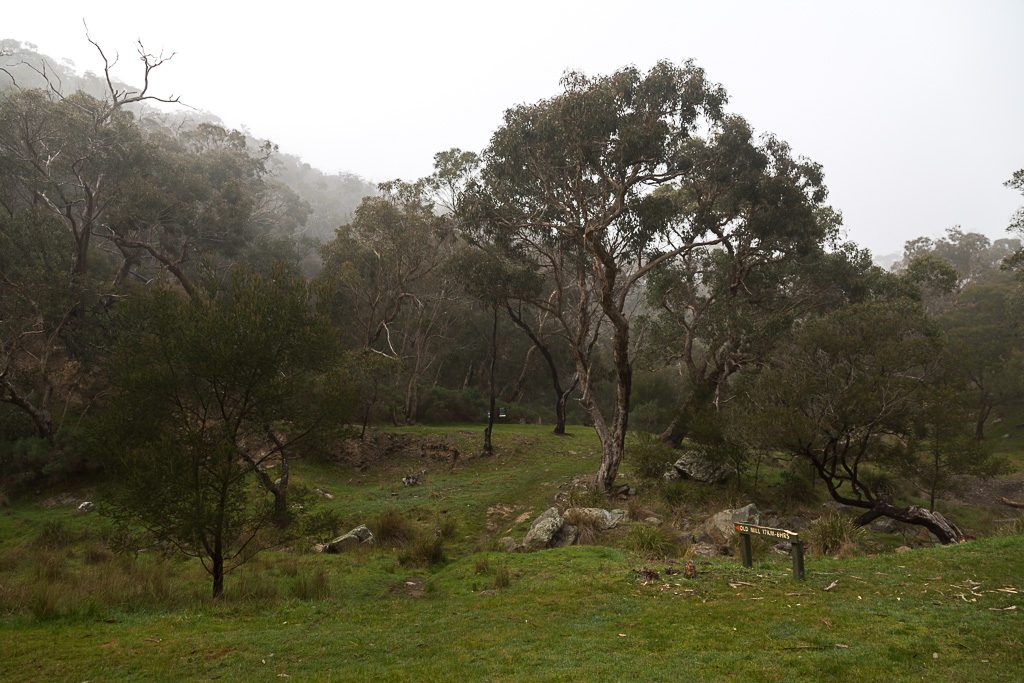 The way ahead was suitably rocky… 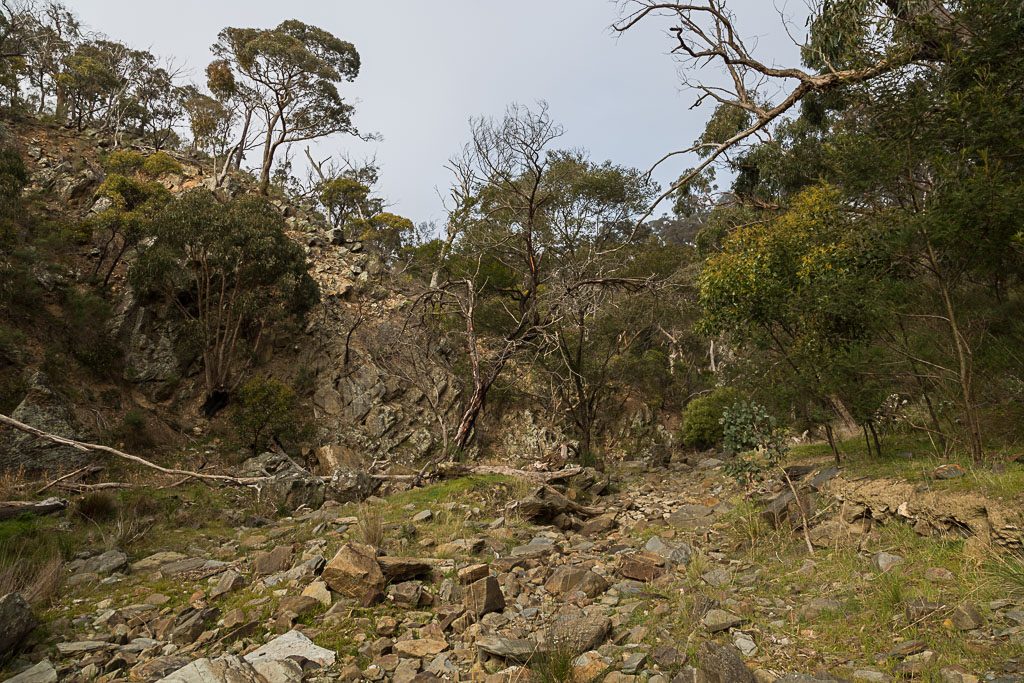 …but, that wasn’t the interesting thing. I’m not sure how, but the cloak of mist seemed to clear in about 0.7 seconds, revealing fine clouds and blue sky. 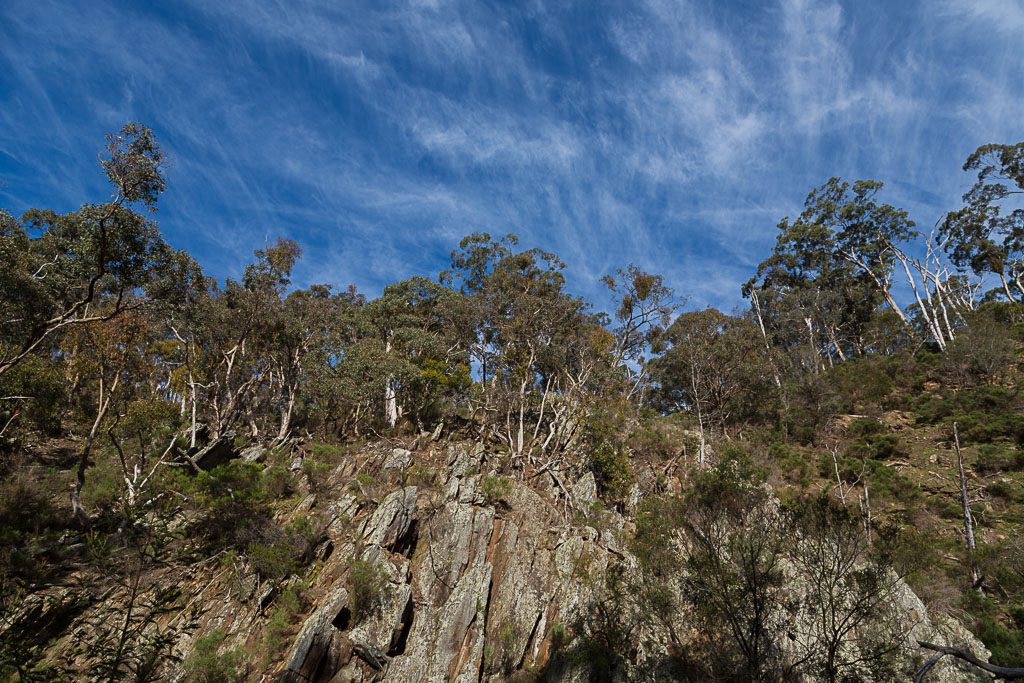 Mm… ‘Fine clouds’ is a pretty crap description, so for a formal identification I consulted my ‘Cloud Collector’s Handbook’, courtesy of the Cloud Appreciation Society. After some eyeball rubbing and head scratching I’ve concluded those clouds are Cirrus Fibratus. Or Cirrostratus. Then again, they could be Cirrocumulus. I think.

At ground level, other than the occasional rock pool, the river was dry. In theory, if you’d run out of water, you could try some of this stuff? I’m not sure of the physical outcome though. In some places you’ll find pure spring water from the ground, but this pool was more of the Chernobyl variety. Who knows though? One sip and you might walk faster, due to the consequences of growing extra limbs as a result of the inevitable mutation. 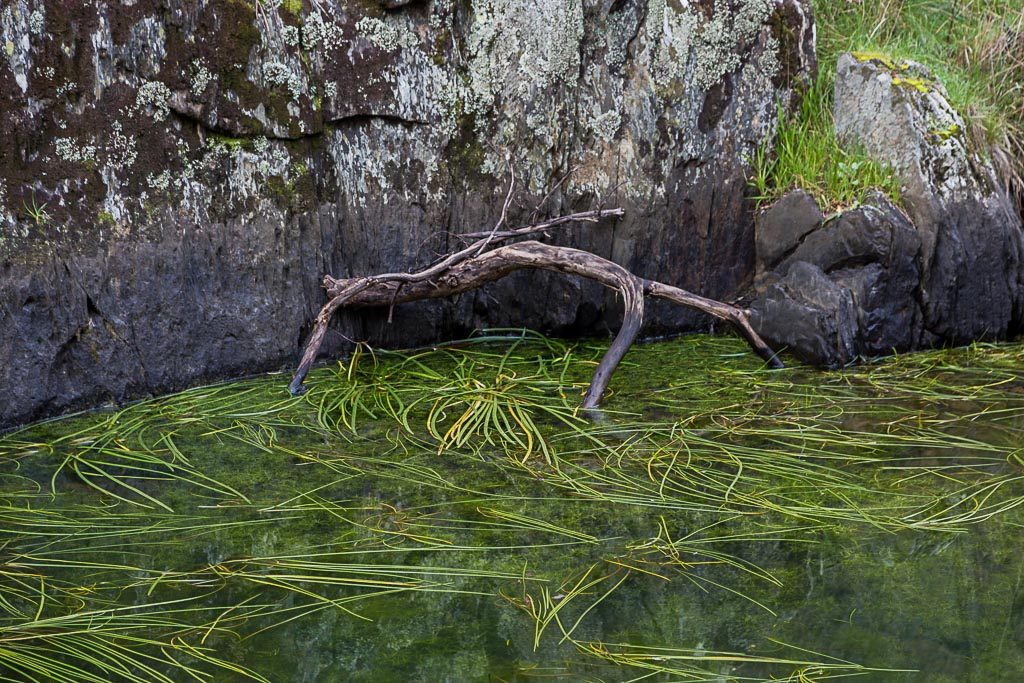 Up above, the peace and quiet was interrupted by a raucous cockatoo flying by… 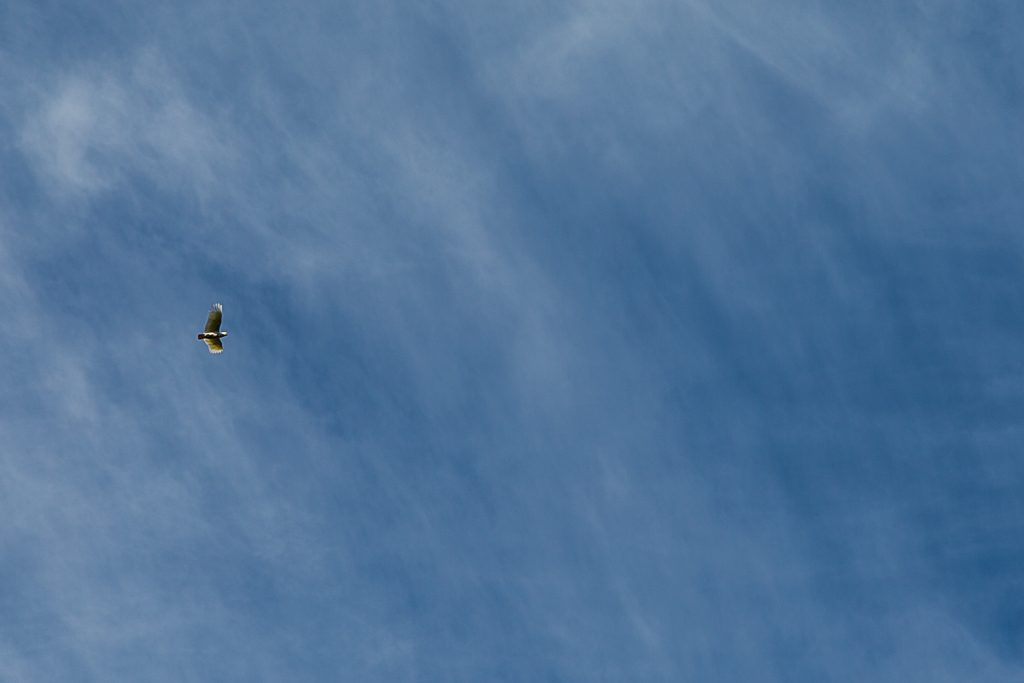 …and whilst I was bent over backwards taking the last photo, I noticed these bare branches, which stood out against whatever those clouds were I mentioned earlier. 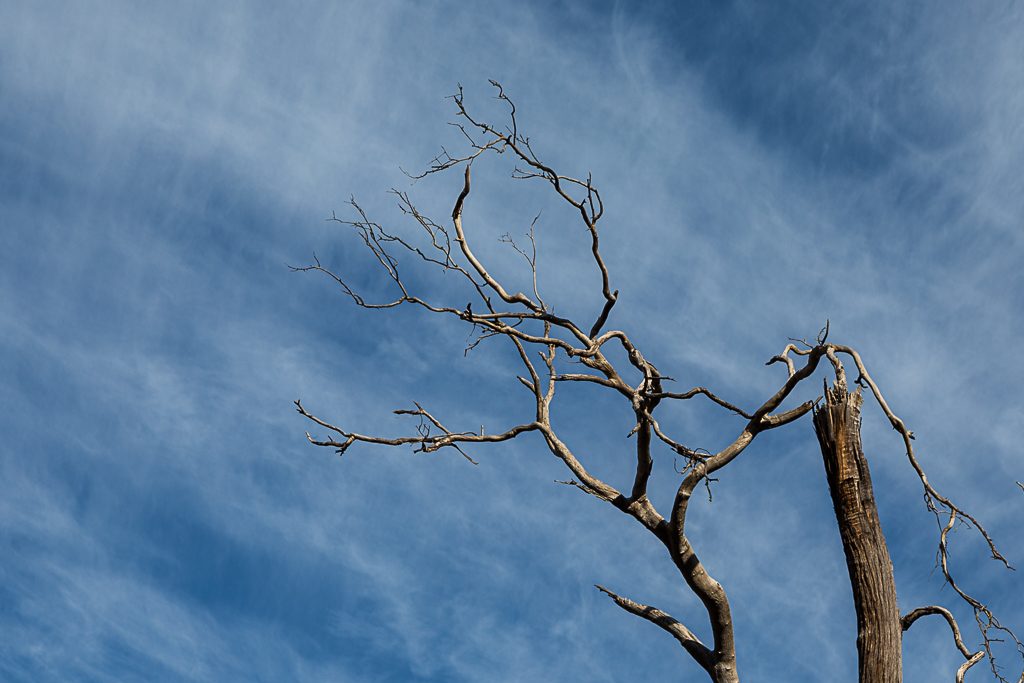 My early fears of twisting an ankle were unfounded, as the track easily followed the river. In hindsight, I think this section was the best part of the day. The high walls around Little River are amphitheatre-like. 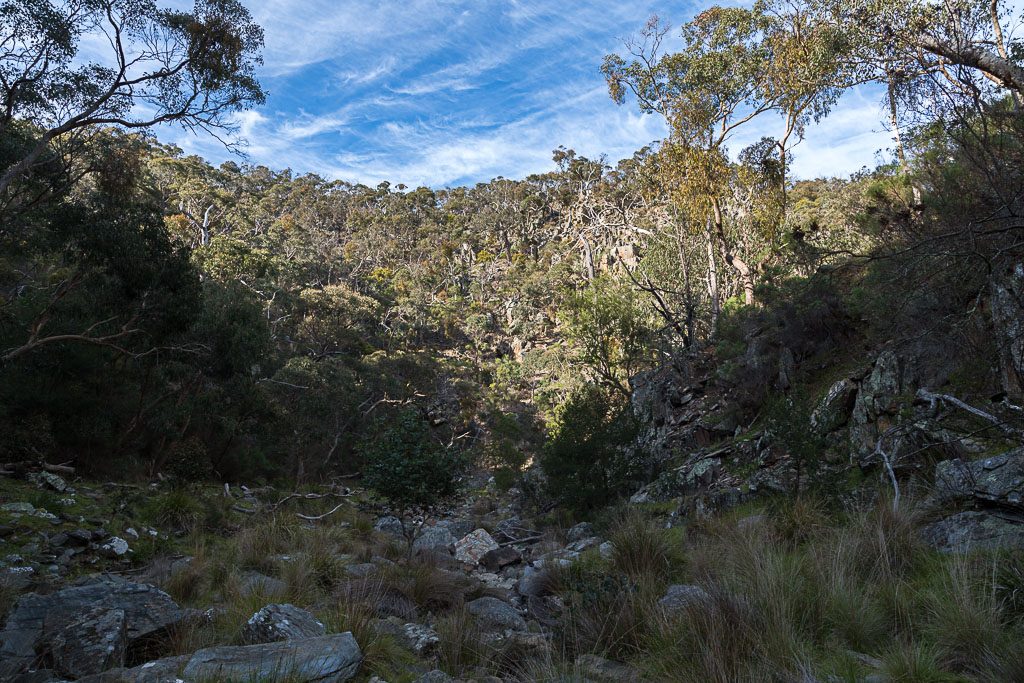 Guess what though? Just as I was soaking up the atmosphere, it was all over. The track meandered away from the river and immediately began to climb. Initially, I thought it was temporary, but unfortunately that was it for the riverbank walking. I was now heading up Griffen Hill. 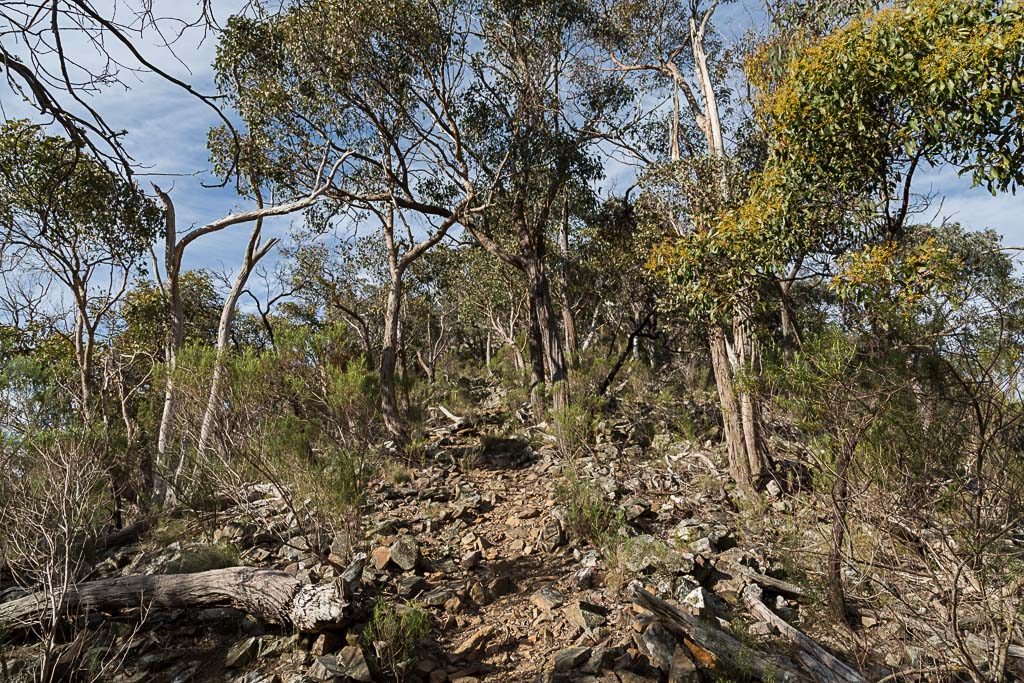 I chugged up the hill like a derailed, obese locomotive. Leaving the amphitheatre feel behind… 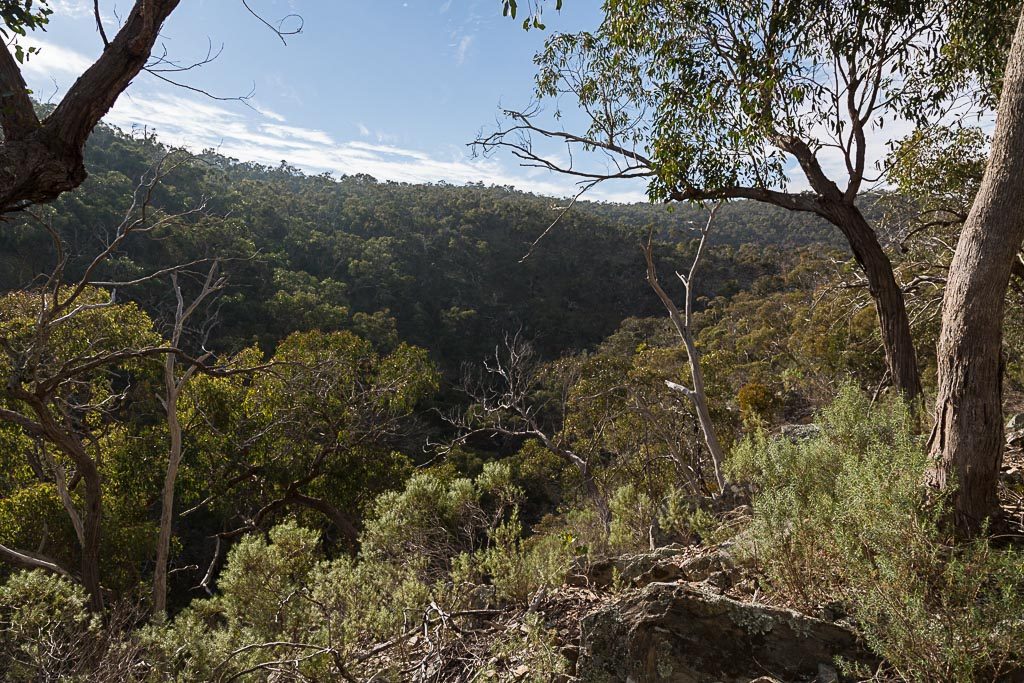 …and returned to usual sights. The ubiquitous grass trees in different shades of health. 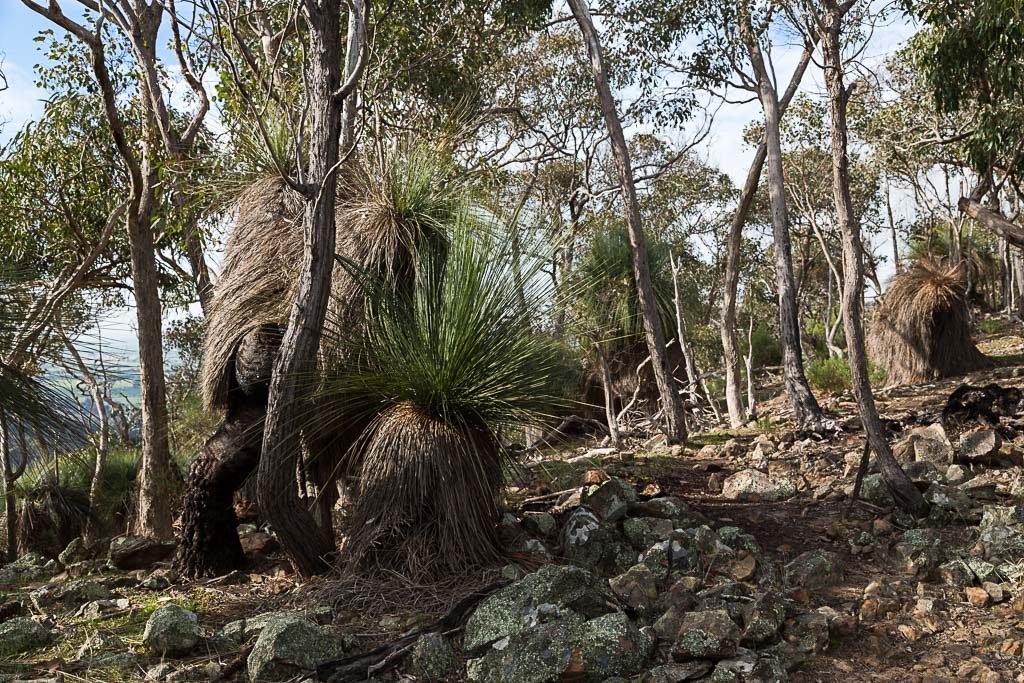 After climbing on a rocky track, the terrain eventually became easier on my lungs and the path was wider. 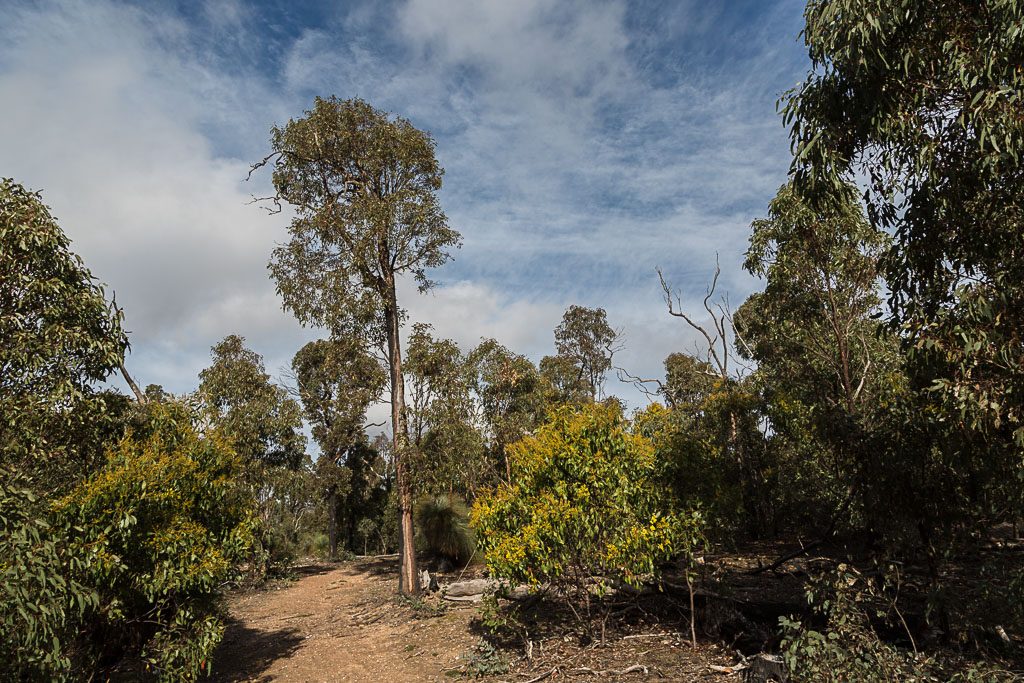 In the last post, I mentioned how phytophthora cinnamomi had taken a toll on the grass trees in the Brisbane Ranges National Park. Then, I went on to say in a comment that I hadn’t seen any boot cleaning stations on the walk. Well, clearly I’d lost the plot, as I happen to have a photo where I’m standing in one. I literally have no recollection of it, but it must be there, as here’s my foot doing some cleaning. 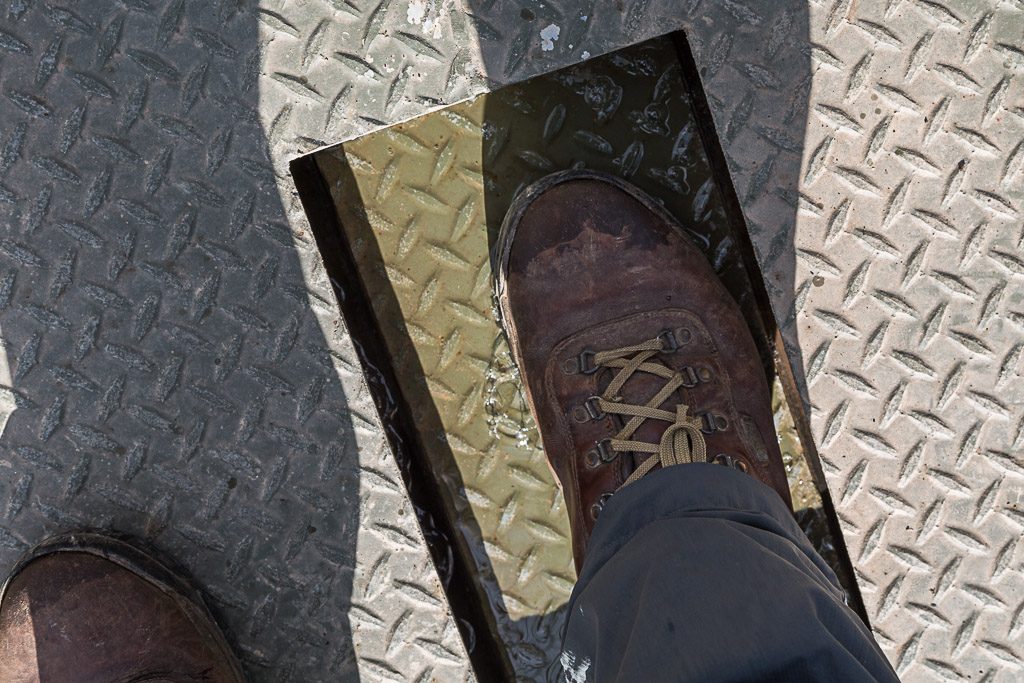 The blog is handy for recording things that might be lost to memory. Sure, good in theory, but I didn’t think I’d forget something that only happened a month ago.

Back to the walk and there’s not a lot going on. The foot track met Switch Road and then I was wandering on the world’s widest path. 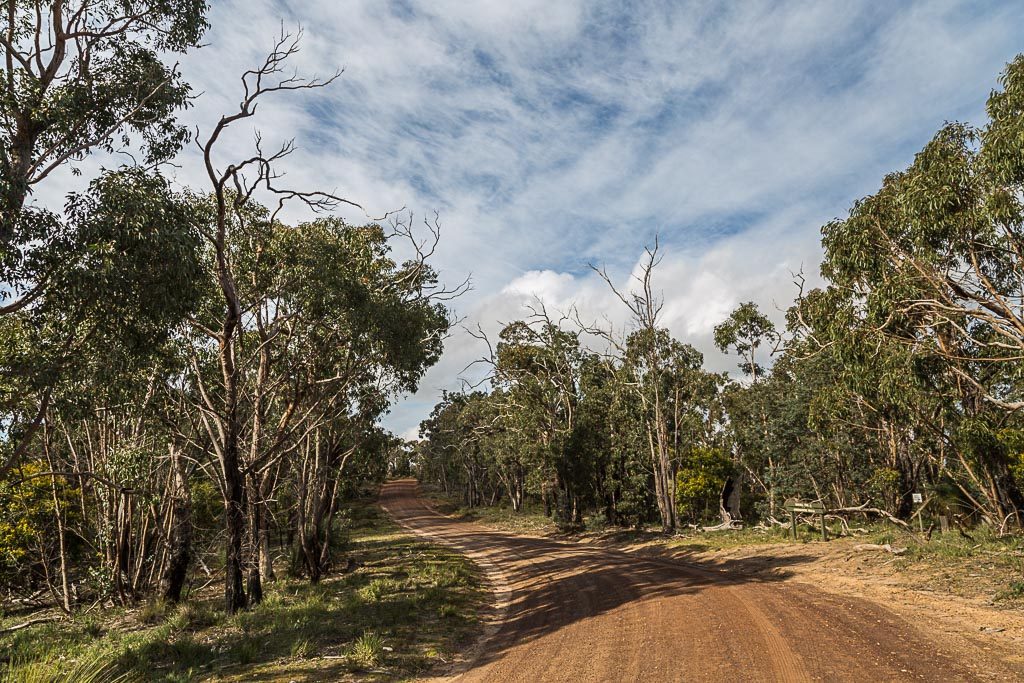 After a few kilometres the road was left and the track led off into the bush with a steepish descent to Lower Stoney Creek Reservoir. Oh, the boot cleaning station I’d mentioned a minute ago wasn’t the first. Just to rub it into my clearly crap memory, before descending, I went through another one. Either extreme daydreaming was to blame or early Alzheimer’s. 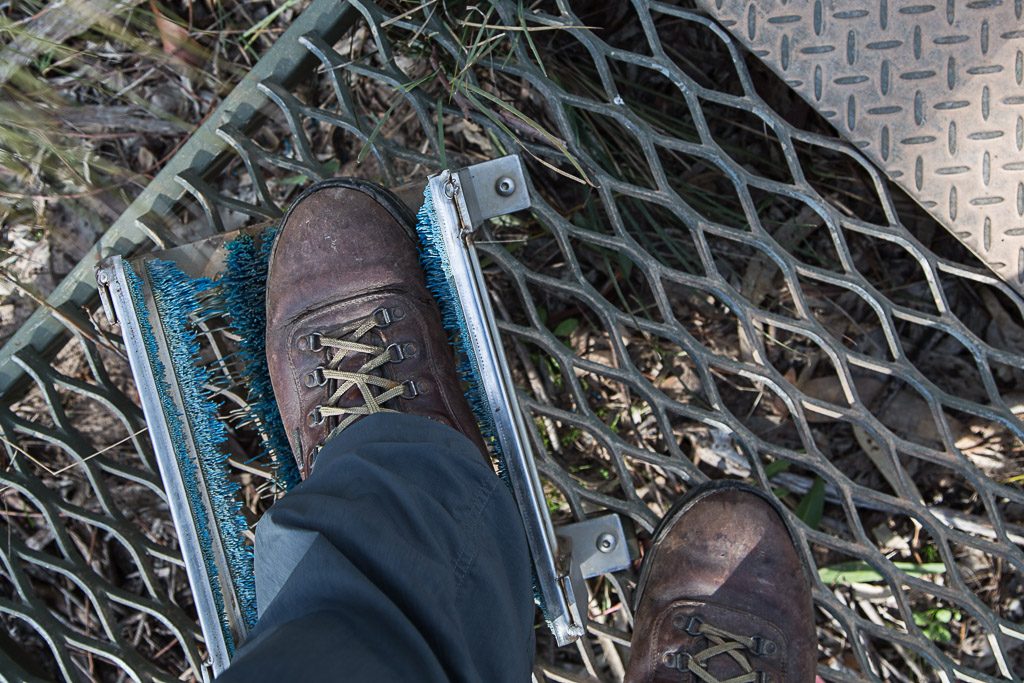 Now though, the track dropped steeply and essentially the camera was put away, as I needed to concentrate. A loose, rocky surface was guaranteed to hurt my creaky knees, so I took it slowly, as the track zig-zagged down the hill. 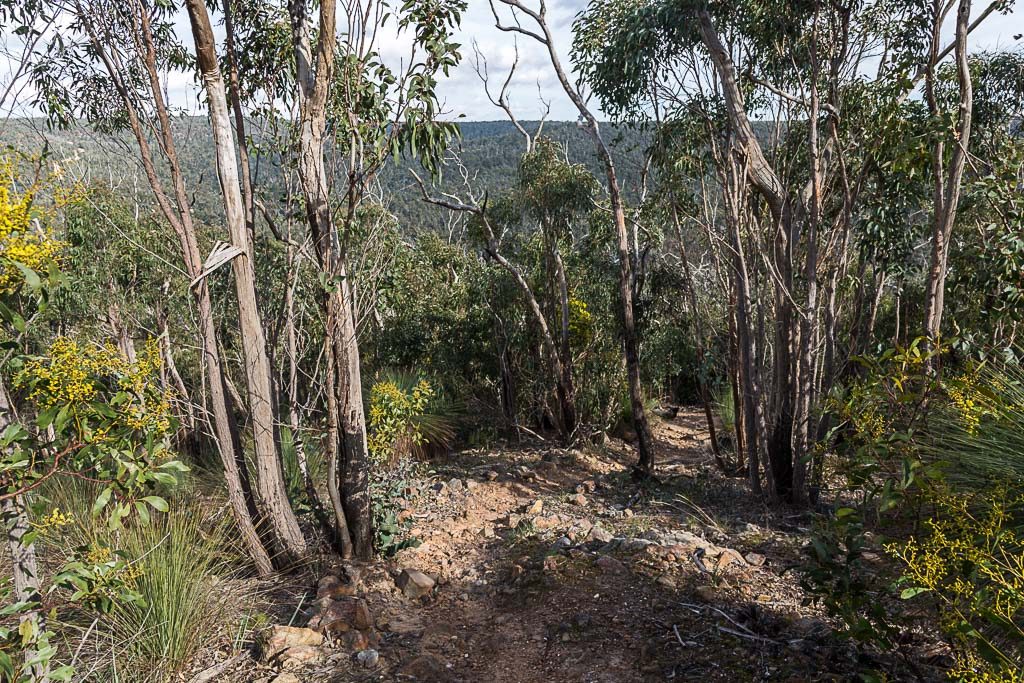 I was glad to reach level ground, as the descent had threatened an implosion of my knees. Now I was on familiar ground. Back in 2014, I’d visited the area near the reservoir during the Ted Errey Walk. Hang on, in that old post, there are photos of me using those boot cleaning stations. Why do I take the same photo when using them? From now on, I will no longer take photos of my boot in a brush. Someone has to make a stand about something.

Anyway, moving on, the track began to climb as it skirted the reservoir. This chair may have been there last time I visited, but I didn’t remember it. Then again, I’ve given you an example of my memory. 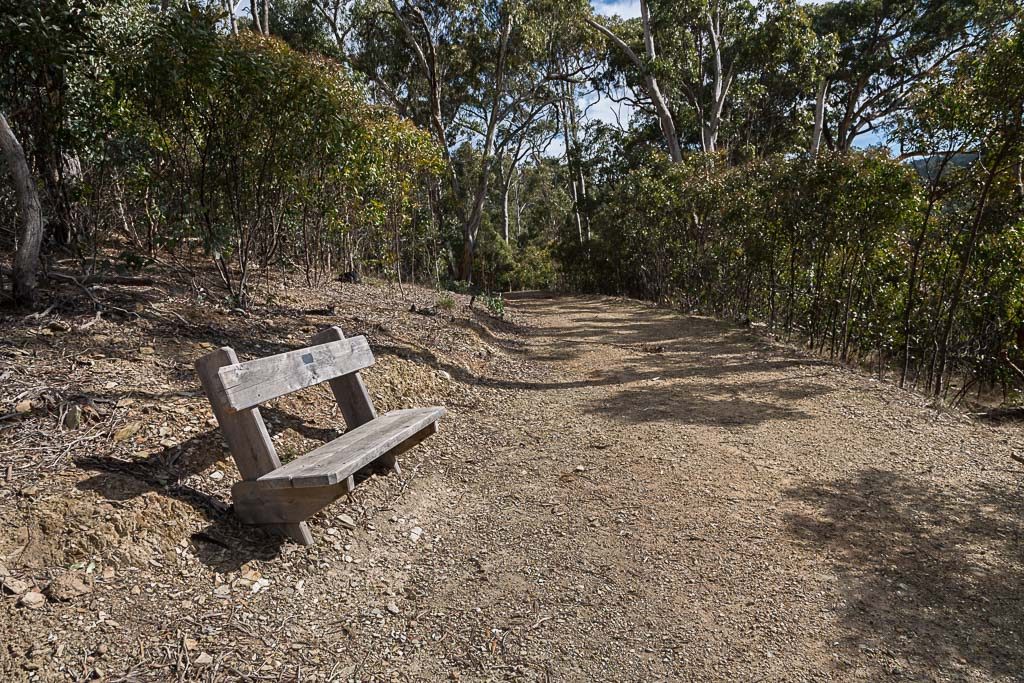 This main thing is, if someone builds a chair, then I’ll stop to sit on it. No matter how tired I am. In the end, this was my only break for the day as I parked on this seat for about 20 minutes.

Sitting back, it was quite relaxing in the winter sun. I could have stayed longer, but with the short day, I still had a number of kilometres to get through, so I got up and trudged on.

Briefly though, I took a detour down to the edge of the Lower Stoney Creek Reservoir. It seemed to be drier than I’d expected. 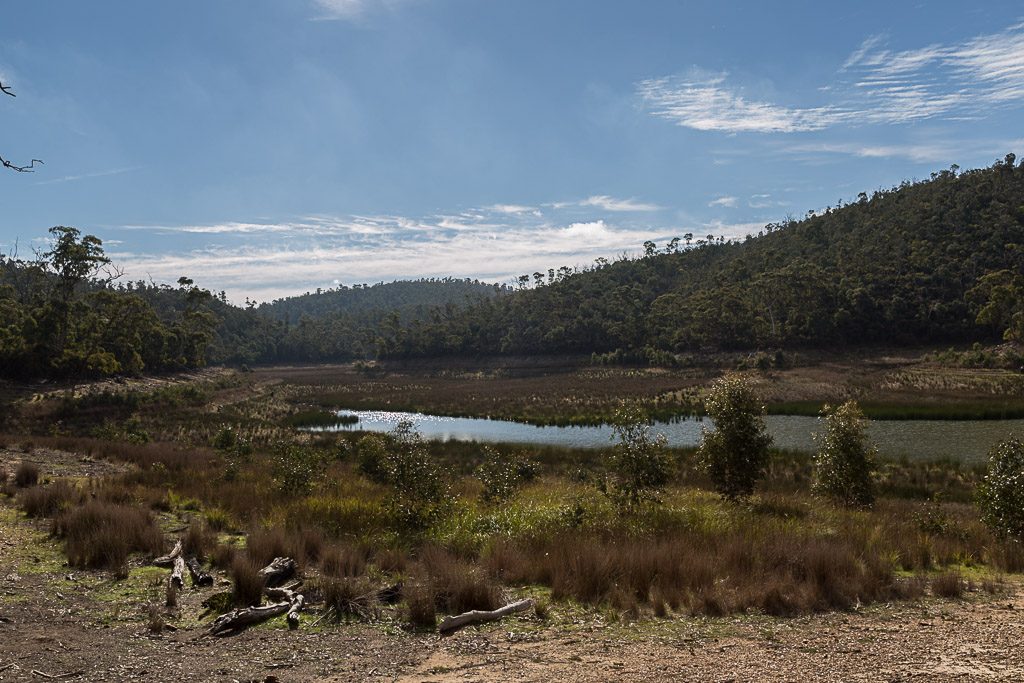 There was now a steady climb… 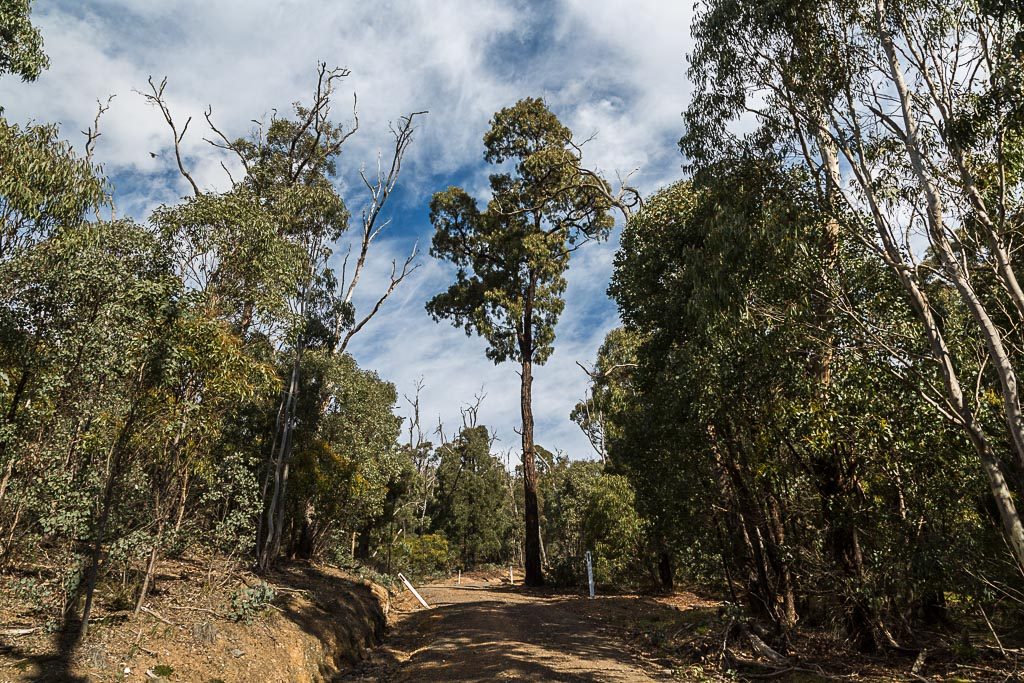 …as the track led up to the Geelong-Ballan Road, which I crossed. 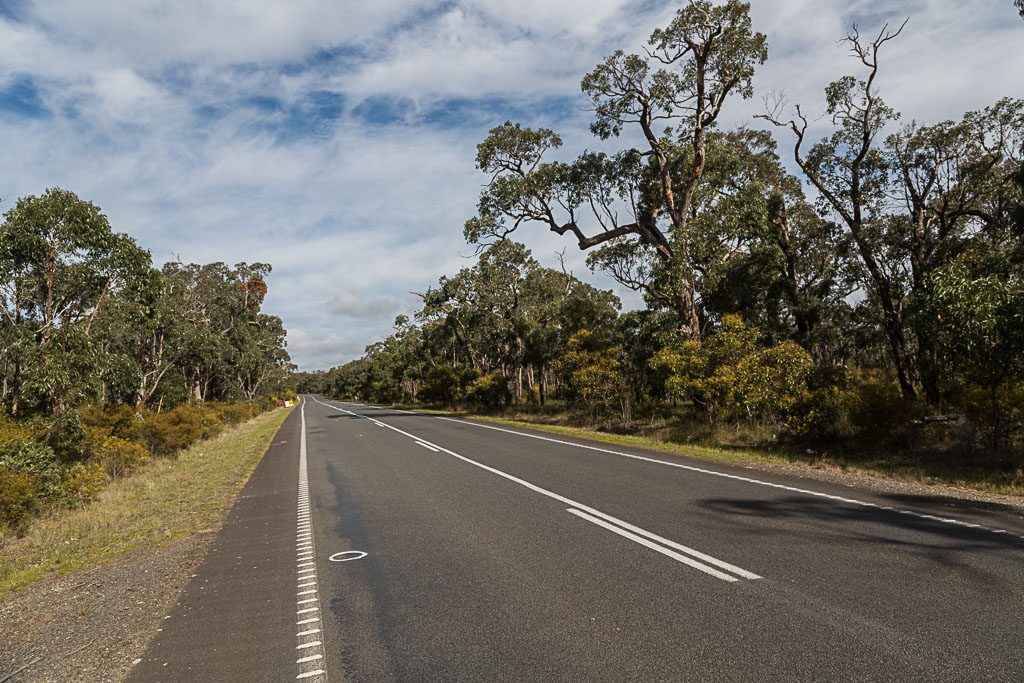 Once over the road, I picked up Furze Track, which would lead me all the way to Old Mill Camp. As is the way, it’s common in parks to see damaged gates. This one wasn’t any different. 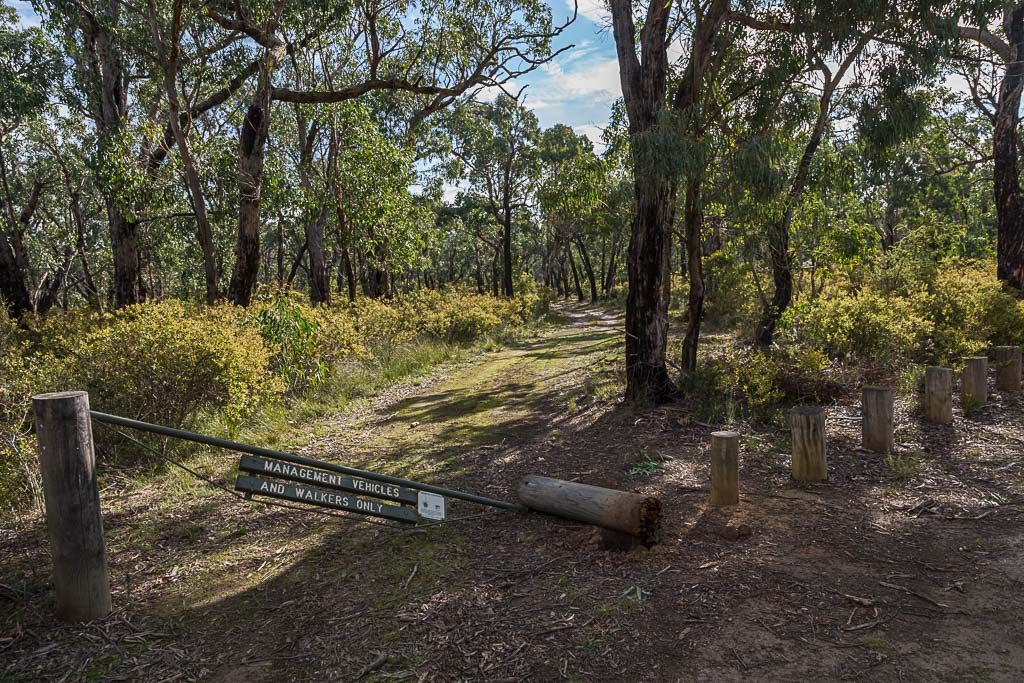 Wandering on, there wasn’t a hill to be seen, so I was making good time and expected to easily reach camp by 4 pm. Can you imagine my surprise then, when I saw this. 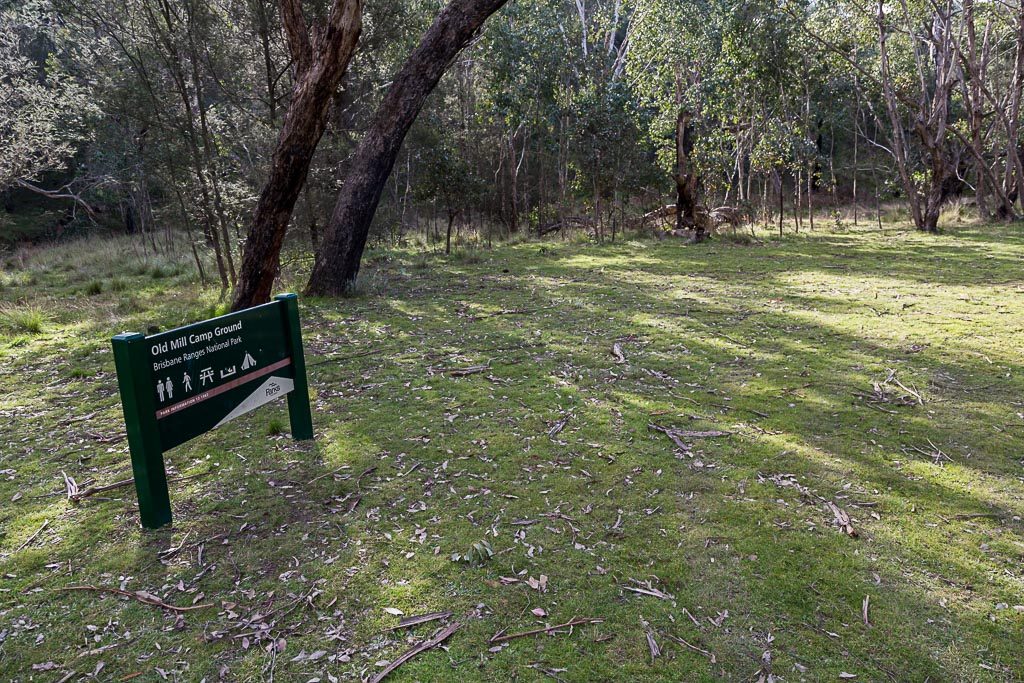 Huh? Why was I at camp so early? More importantly, why was the GPS saying I’d only walked 12.91 km of the supposedly 17 km for the day? Talk about confusion, but at least I had a table and chair to sit at to try and work things out.

I assumed I’d inadvertently skipped part of the track, but after checking the map and then my route on the GPS, it was the same. This made sense, as all day I’d followed the prominent Burchell Trail markers. Now and again, distances from signage compared to GPS can be out, but not by 4 km.

Had my GPS thrown a wobbly? That’s possible, but it doesn’t account for the time taken for the day. I know my pace and I was on track to use the full six hours that were advised. No, my only explanation is the signage reflects a track that has since been re-routed. Maybe. I know the Burchell Trail has been realigned, so I assume this accounts for the discrepancy. Sure, but could they inform the cartographers? I was carrying the second edition of the Meridian Maps, Brisbane Ranges National Park, and it details the longer distance.

I use a Gamin eTrex 30 and I enquired what Parks Vic use to measure distances with. They sent me a photo of their current device. Ah, now it’s all starting to make sense. 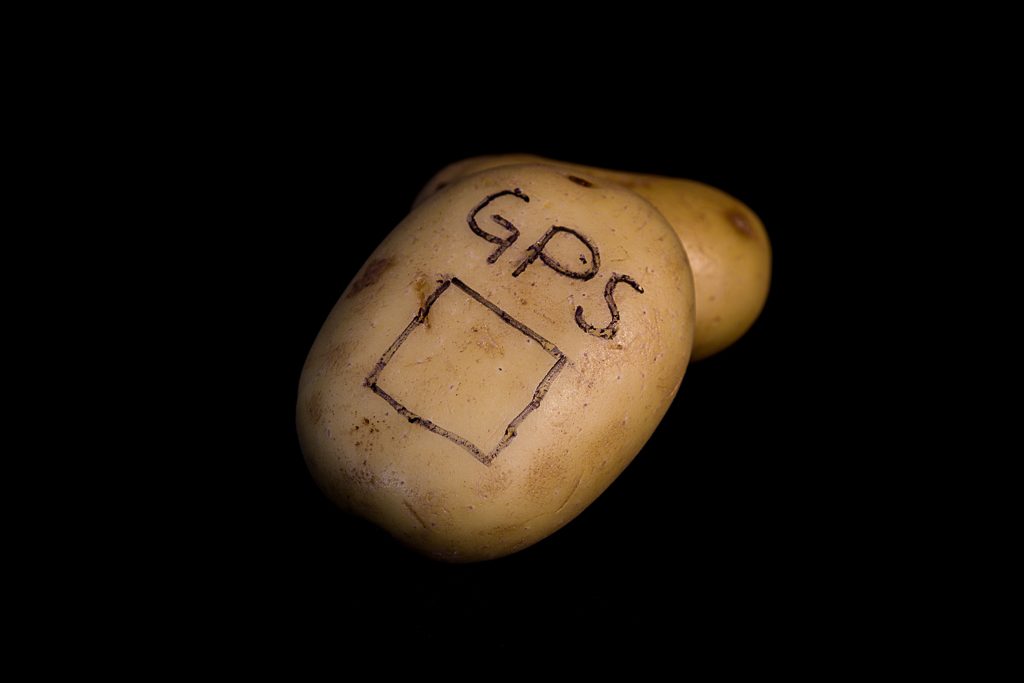 Whatever the answer, I can tell you now. The leg between Little River Camp and Old Mill Camp, Burchell Trail is 13 km rather than 17. I’m happy to be corrected though.

Anyway, the bonus of an early finish is I had plenty of time to set up and get some food on the go. I’d seen no one all day, but late in the afternoon, I became aware of the distinctly annoying noise of 2-stroke motorbikes in close vicinity. Their abrasive sound gradually got closer, until two blokes appeared at the camp on their bikes. They stopped for a brief chat and sure they were friendly enough, but roaring motorbikes weren’t what I expected to see. Are they even allowed in the Brisbane Ranges? I’d say doubtful, but it might explain why so many gates have been damaged to allow access.

Soon though, they took off and I was left to tick off the remaining hours of daylight. Old Mill Camp is in a protected area from the weather, but this meant another freezing night was coming up. That’s also is it for this post. One more to go and this walk is done. Oh, here’s the GPS route as proof that the day is a lot shorter than what the signage suggests.