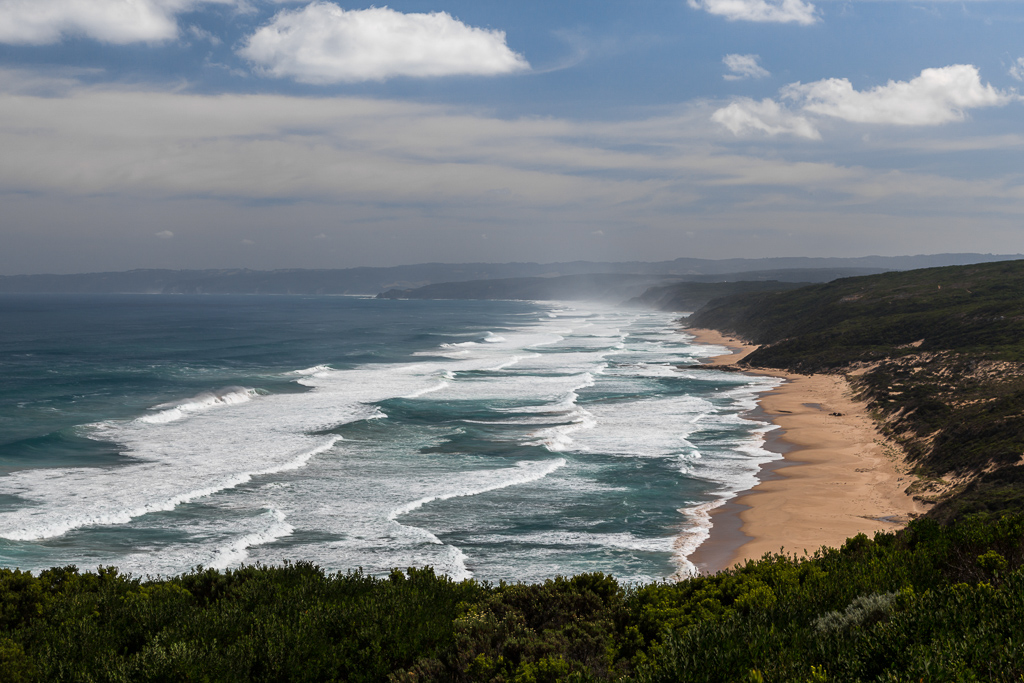 You’re in luck today. I’m running on empty, so there won’t be a lot in this post. It’s also a reflection of the Great Ocean Walk. A day of action would be followed by something a little more mundane. Not bad, but nothing to really write about.

At less than 10 km, Cape Otway to Aire River is quite short. An undulating walk along cliff tops, before finishing up with a speedy descent to Aire River. I might be short on words, but I didn’t make things easier for myself, as I forgot to take any photos as well.

I’ve a good reason for this lack of words and imagery. I think I had a drug overdose. Remember the last entry? The inability to bend, resulting in an eye watering torn muscle in my back? I successfully combated this pain by taking a fistful of pills and made it to Cape Otway in reasonable shape.

It’s a bit different when stopped though. I retired to my tent, stretched out and after a few hours the temple of medication had worn off. My day of being in a dreamy state was over and any slight movement had my face in contortions.

The night was long and the new day greeted my squinting eyes with a cloudless sky and burning sun. With my back throbbing, it took me roughly six hours to roll out of my tent and stand up. Even though it was only a short day to come, I found hobbling to the comfort station quite difficult. Mm… How was I going to make it in this state?

I’ll tell you how. Select the required pills of jubilation and then against all sensible medical advice, double the dose. Yeah okay, I can see you shaking your head vigorously, whilst performing a high voltage tsk-tsk. This method of taking medication is not for everyone. Actually, when I think about it, it’s not for me either.

It was one for ages, as I lined up the pills and with a blur of my hands I hoovered the lot in one hit. Sitting down, I felt confident they’d shortly perform their enchanting effect and once it again it would feel as if I’m lying on a magic carpet for the day.

Slowly I felt my body warm up, as the jolts of pain became dulled and my eyes became glazed over. Unfortunately though, this warming continued until I was slurring my words and beginning to foam at the mouth. My brain had been shut off and I began thinking, “Is this the last thing Michael Jackson felt?”

So there you go. I may have been close to a near-fatal overdose, but more important things were on my mind. I’d gone from wondering if I’d make 10 km in a stiff and sore state, to worrying if I’d make 10 feet with my now non-functioning legs.

Anyway, enough of this. The walking began and the first port of call was the Cape Otway Cemetery, which is only a short distance away. There was a slight problem though. Heading out onto the track, I was suddenly overtaken by a group of French tourists attired with sprayed on clothing. This was okay, but it was the clouds of cigarette smoke emanating from their group which was a little annoying. In a confined space, lined with trees, it felt as if I’d stepped back into the Industrial Revolution.

I stopped for a while in order to get some distance from them before resuming. With the coast clear, I slowly moved on dragging my foot behind me like Quasimodo. Unusually though, I reckon I’d only strolled about 10 metres before looking up and finding the smoke cloud gaggle stationary in the middle of the track. What were they doing? Halting again, I waited for them to resume. Waiting, waiting, no, apparently they were never ever going to move again, so I started up with a thought I’d overtake them.

Oh yeah, you know what’s going to happen. No sooner had I reached the carcinogenic cloud and they began walking again, with me stuck right amongst them. If only I’d brought my hiking poles with me. If so, I would have been legally permitted to slip into 16th century mode, removed thine French heads and paraded all the way to Aire River with their noggins impaled one on top of the other like an oversized kebab. Unfortunately, the only weapon I had was body odour and they didn’t seem perturbed by this.

Remember the cemetery? Well, that’s where the smokestacks were going and I was glued in the middle. I was looking forward to seeing these isolated graves, but instead, it was now a joint I couldn’t wait to escape. I took one photo of lichen on a headstone, which just happened to have been taken from the identical position on my previous visits in 2009 and 2010.  Luckily, I’ve now got three of these. Here it is. Again. 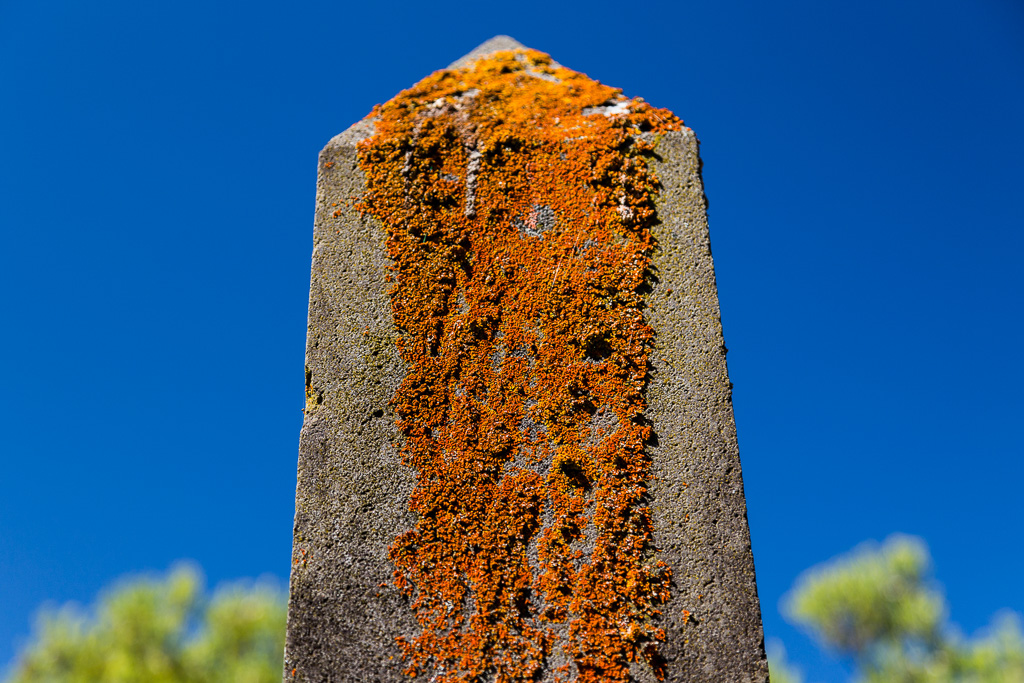 I spent about 0.3 second within the cemetery before decamping, whilst the mobile chimneys went in the opposite direction. Phew. As it goes, there’s not a lot to say about the rest of the day. Let it be known though, my legs were officially useless. I can’t think of an occasion where I’ve had less strength, with every step being a struggle.

Between my insanely slow strolling, there were some nice views to be had. Station Beach looked inviting, but I steered well clear of it. More on that later. 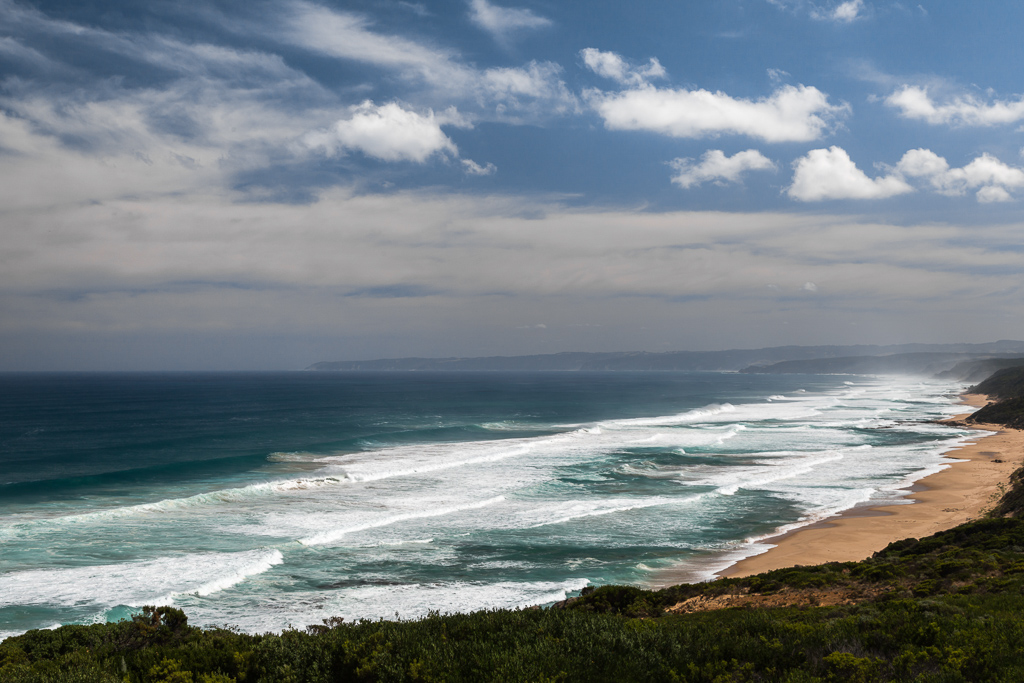 The track was nice as well. A little bit sandy, but nothing too horrific. 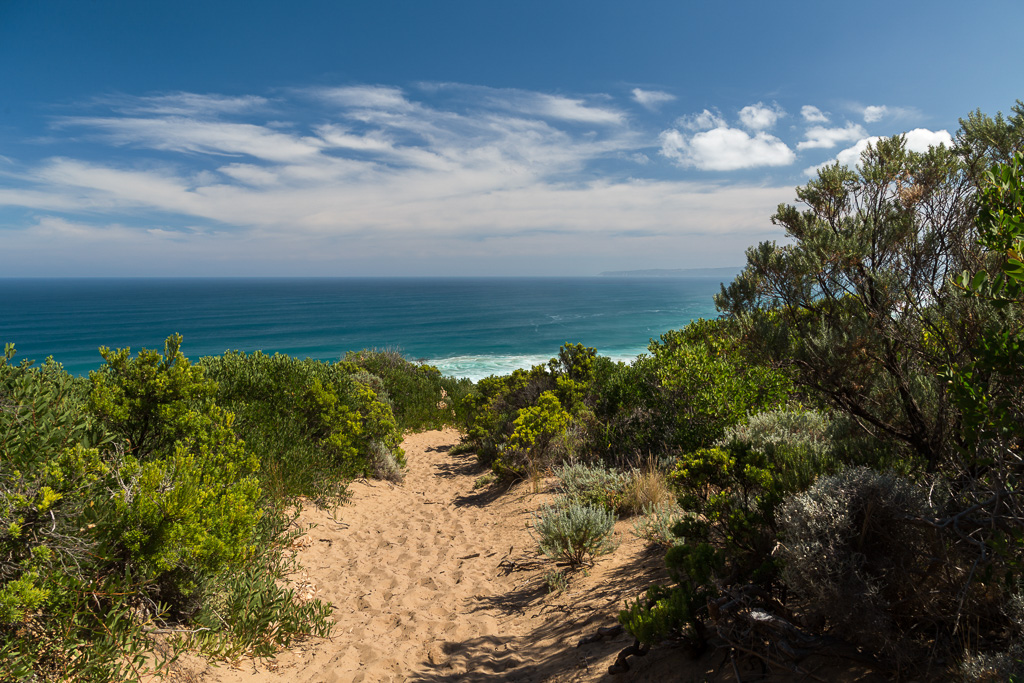 An echidna was spotted amongst the scrub and I managed to take a photo, but I’m not sure what I was focusing on, as it’s a complete blur. Actually, the whole day was a blur. I was glad to see the opening of Aire River to the ocean… 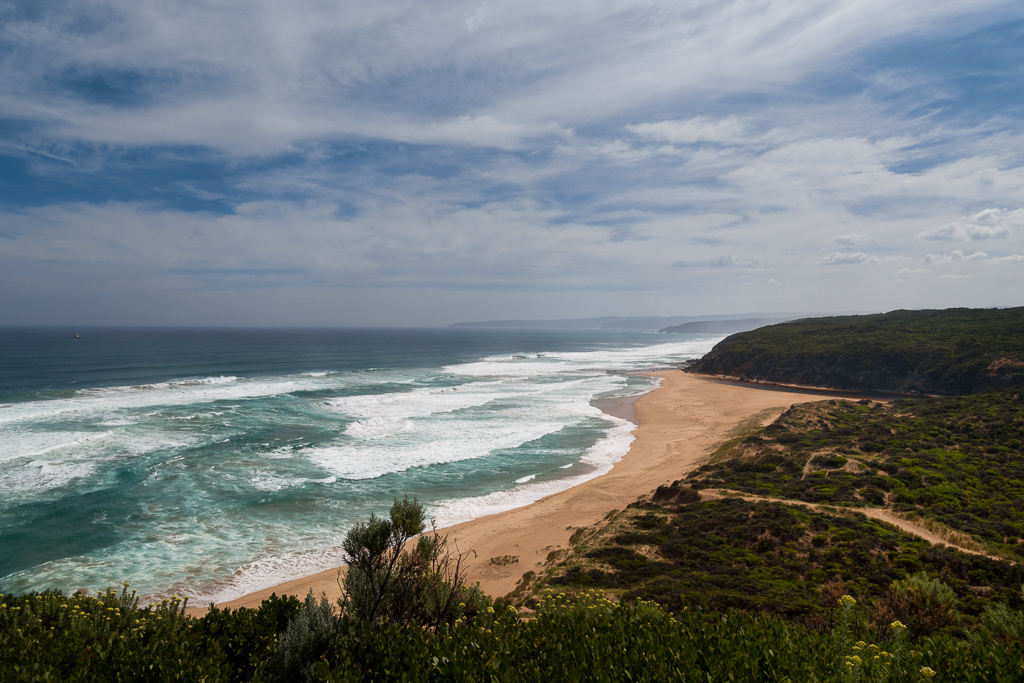 …before passing through tunnels of ti-tree. 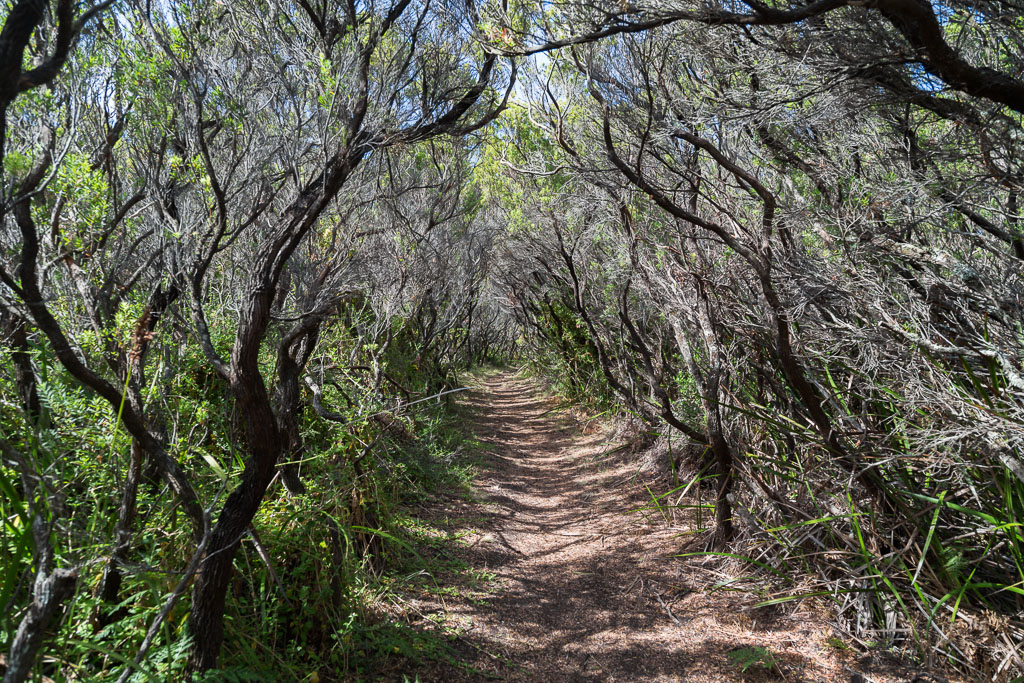 Then the crazed, downhill section occurred and suddenly I was at Aire River campsite. I say ‘suddenly’, but I’m really talking things up. It took me roughly a decade to walk the 10 km. Certainly some lessons were learnt this day, which I guess leads me to the, ‘was-inaugural-three-posts-ago’…

Right. There are only a couple of things. Our Dutch walking companions had asked me what was to come on this stretch. I told them to head down to Station Beach for a bit of a wander. It makes a change from cliff-top walking, so at the end of the day I was keen to see what route they took. I asked Harold, the ‘Eindhoven Express’ , if the beach was conquered. He paused for a moment, ran his portable orbital buffer across his glistening bald head and replied, “No. It was too hot, so we didn’t go on the beach.” How did I know he was going to say that? No one listens to my advice.

Actually, on my first trip I remember seeing Station Beach and thinking it would be great to get down close to the thumping surf. It would also make a change from the cliffs, so at the first opportunity I raced down to the sand. Little did I know, Station Beach is like quicksand. Under a heavy pack I thought I was going to vanish, so at the first opportunity I exited before being sucked under. It’s soft stuff, but maybe pencil-thin hikers will find it a breeze, rather than us generous sized gents.

Oh yeah. If you do go to Station Beach, don’t even think about swimming there. No matter how inviting it looks. Up on the cliffs you can see rips creating havoc amongst the waves, which endlessly crump onto the beach. So, unless you’re Mark Spitz, don’t even bother. If you’re suicidal, then by all means jump in. You definitely won’t need to weigh your pockets down with rocks to drown. Do you think I’m being a bit melodramatic? Not really, as a bloke drowned on the very same beach last week.

What else? Oh, don’t take a drug overdose in the morning. It’s difficult to walk afterwards.

Is that it? I think so. Aire River is quite a nice spot, with the hikers campsite set apart from car campers. Late in the day, as the light faded, I slipped down to the Aire River bridge to capture the moon slowly rising. I must say, it was not the greatest day of my hiking career, but even whilst suffering a drug narcosis, it was still better than any day I’ve ever spent at work. 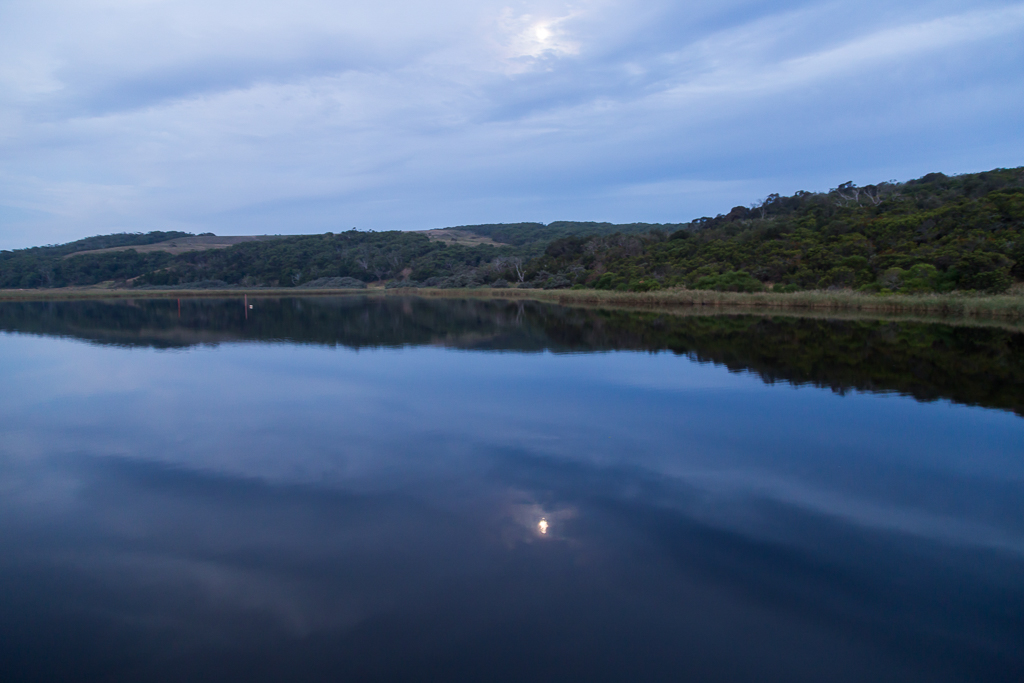