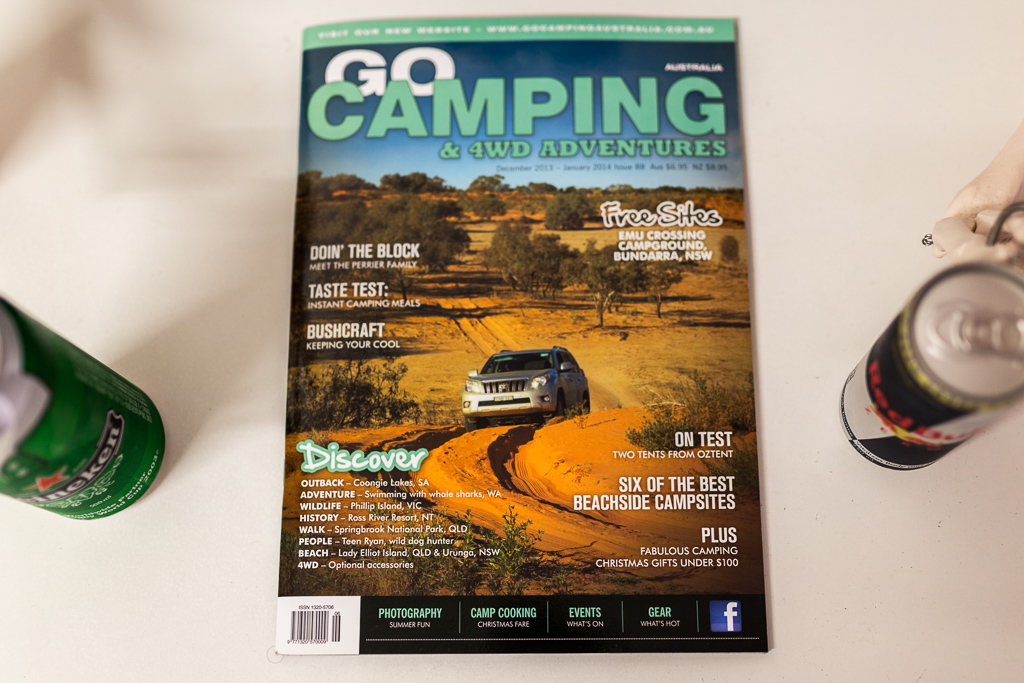 Raise your hands to the sky and praise the dude with the beard (not Jeff Bridges), as this is a rapid-fire, end of the working week post. One cup of tea should get you through. I was contemplating something larger, but I’m out of juice, so I thought I’d just bring you up to date with what’s been happening.

See the photo of ‘Go Camping’ magazine above? Yeah okay, don’t adjust your eyeballs if it looks a bit blurry, as it is. Well, not out of focus, but there’s a bit too much bokeh brutality going on. Anyway, I wrote an article for the magazine and somehow I’ve barely mentioned it. As this blog is an extended spiel of pumping up my own tyres and generally informing you how magnificent I am, then neglecting the article is a bit of a slip-up.

So much has been going on lately, I simply forgot about it. Luckily, Derek, my ‘forget skin out weight, try skin off’ ultra-light, hiking housemate has been on the ball. Being about 10 kg in mass means you can get away with a bit of junk food, such as the potato cake he’s munching on in the next image. Oh yeah, you can also smoke man-size cigarettes when you don’t have any lungs to worry about. 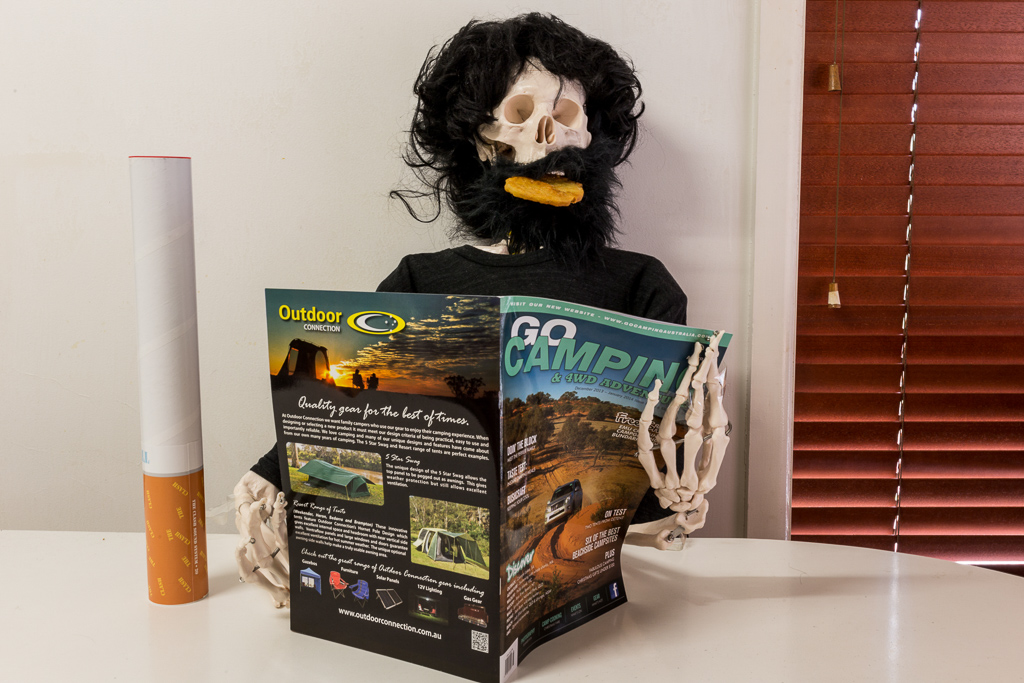 Anyway, the Go Camping magazine, Issue 88 article was about hiking food and I didn’t realise how something so simple could have been so hard. Firstly, I managed to source an absolute shitload of food from different manufacturers. The logical theory would be to then eat them over a period of time and rate accordingly. Yes, that’s the logical method, but I went for something a little different.

I loaded up the car with a million packets of food and hit the stately premises of my occasional walking partner, the Smuffin, for a massive lightweight cook-off and tasting session. A select group of psychopaths joined me and somehow we churned through a ton of food and without doubt, down to every last living soul, we all felt like a tube had been put down our throats and cement poured in. For about a week, my guts felt like a pallet of bricks had been lodged in it. I kid you not, but even now I feel scarred by the experience. If you ever come across the Smuffin and mention it, you’ll probably find him shaking, as he relives the horror.

Anyway, photos were taken, food was rated and then I wrote the article. 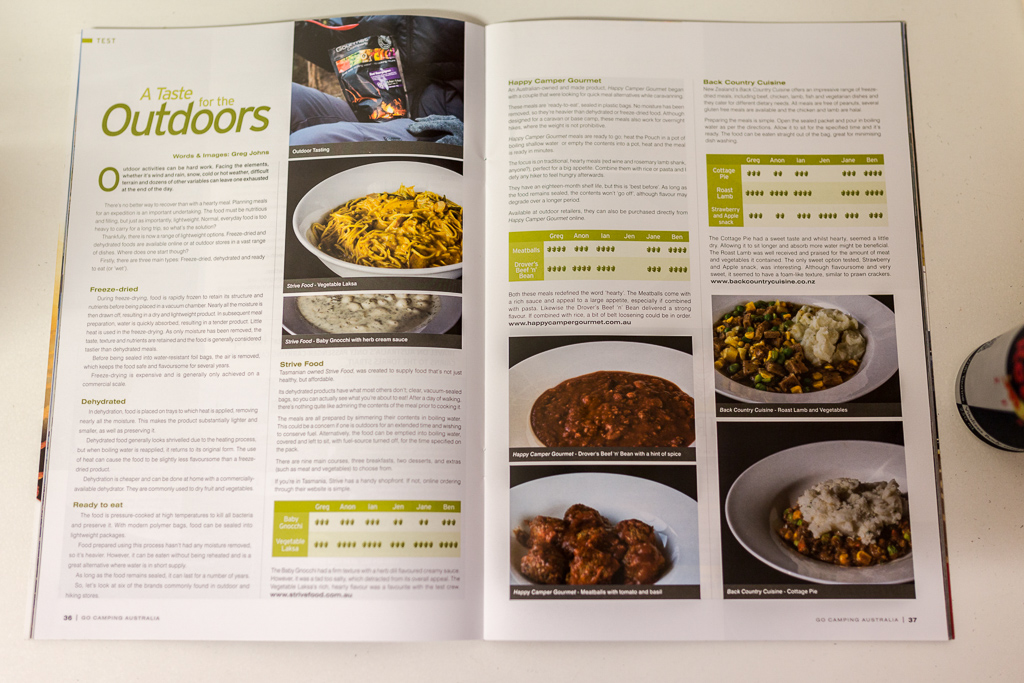 It seems to have been well-received and I guess getting two articles published for the year was a pretty good effort. I was contemplating doing another photo shoot in a similar vein to my Wild magazine article plug, but again, the mojo vaporized and it didn’t happen. The best I can give you is a potato cake eating skeleton instead. Oh yeah, he’s a bit of a bad arse. Knocking down beer and Red Bull at the same time, whilst reading is not for the faint hearted. 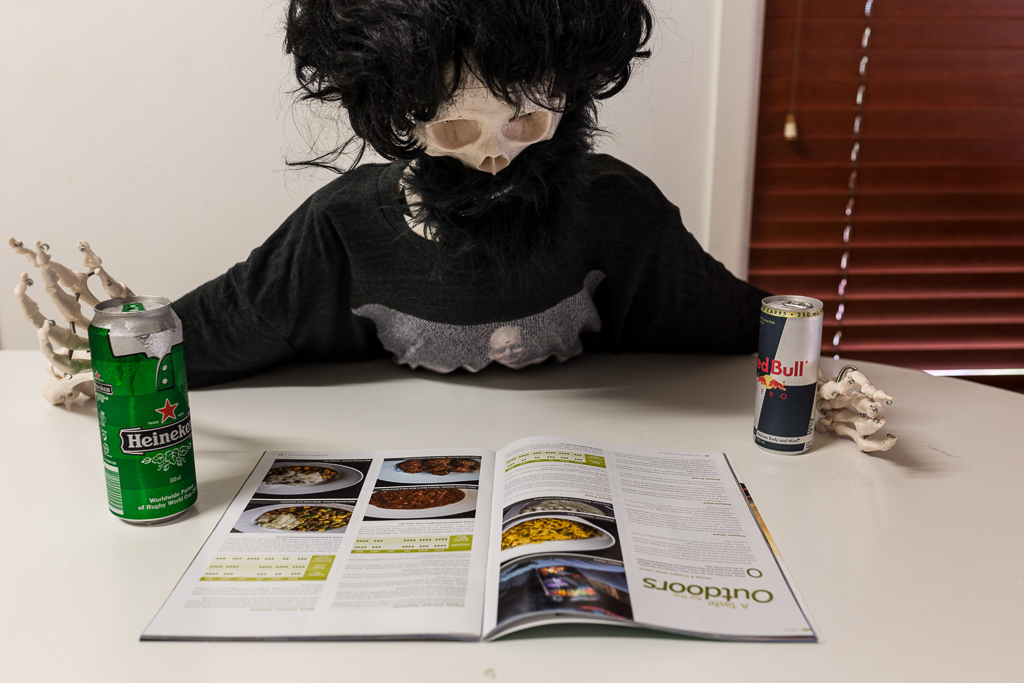 There you go. All in all, this post is a pretty piss poor overview, considering the article took a few months to put together! What else has been going on?

My neck saga is still ongoing, but plans have been made for a hike next month. It’s a week long jaunt, which sounds a bit bizarre when I’ve done exactly nothing this year, but there’s a catch. It’s a Smuffin expedition and it’s going to be supported by the noble Lady Smuffin, who’ll be providing food and foot massages at the end of every second day. No doubt Victoria in March will be warmish, so with bugger-all to carry, it’ll practically be day packs all the time. Hopefully the neck won’t complain too much. Week long hikes in remote Tasmania carrying a bison for food are not on the cards for a while, so this supported stroll next month will be it for now.

Oh yeah, speaking of the Smuffins, there’s been a bit of an outcry, as I haven’t included their jokes in any posts. Best I do it now, whilst I remember. How’s this one from Lady Smuffin.

Q: ‘What do you call an astronauts package?’
A: ‘Space junk.’

Pretty good, huh? That’s one and the other wasn’t really a joke, but Smuffin came up with a comment regarding Torah Bright. “Do you realise she’s only two Tora’s away from an attack on Pearl Harbour?” I think it’s pretty good, but you’ve got to know your military history to get it.

What else? I’ve decided to branch out in the writing stakes this year. My babbling on the blog comes quite easily, but in order to keep motivated I’ve thought about tackling a book. It’s been on my mind for years and only now have I realised I should be pulling my finger out and getting it done. In order to get some motivation, I spent a day at the Gunna’s Writing Masterclass, which is run by Catherine Deveny.

I wasn’t sure what to expect, but I must say I came out feeling some long sought after purpose with the writing. If you want to know a bit about the books theme (as if you have a choice, as I’m going to tell you anyway), then here’s a piece I wrote in the class on her webpage. I’m not sure how, but I wrote this piece, ‘The Sign Holds the Message’ in 17 minutes. I must admit, my hand nearly fell off, as I rarely hand write these days. It did have advantages though, as I could pause to allow some blood to return to my mitt, which allowed me to think out the story a little better. 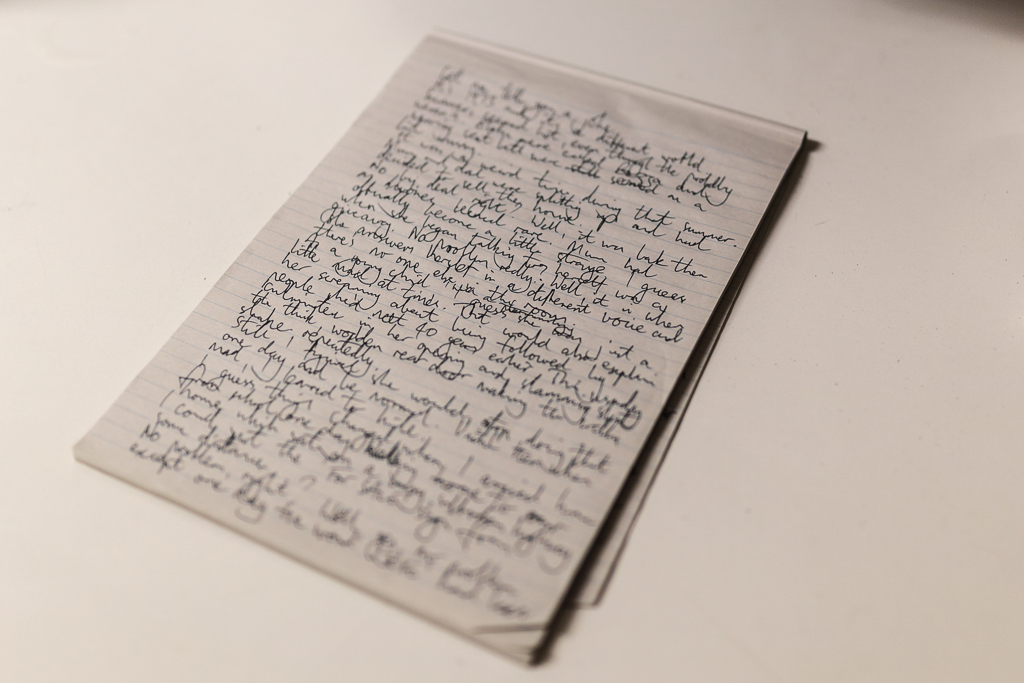 Unheard of method. Writing by hand.

Essentially, the book is going to be a rampaging, roller-coaster story of my childhood growing up in a house full of lunatics. Don’t panic, as the ‘observational disillusionment’ style of these posts will be applied, which will hopefully guarantee some entertainment. The blog will also continue, but there might be the odd break during the year to tackle the book writing.

As I’ve written in earlier posts, I feel it’s important to record and detail the lives of people who are normally lost to history. Obviously my mother will be the main aspect. This is one of her diary entries,

‘The Duke of Edinburgh – “We kept her in hypnosis til 1963 when she was expecting Greg. Then we put him in hypnosis until he was 3…we got the power through Patrick McDowell because of the job we did on him in 1899″. I was told to stay at home to keep the programme going for the Queen whereby she could get through to a variety of people, including a number of Heads of State and top politicians. The earthquake was merely a cover up for this, that’s why they had to put the tremors under the ground and house to fool the world on this point.”

Now, you tell me why I shouldn’t be writing about her life…?

In finishing off, Ben and I have found some interesting areas for night time photography. A group of abandoned factories in the western suburbs near this road look perfect for a bit of urban decay imagery. 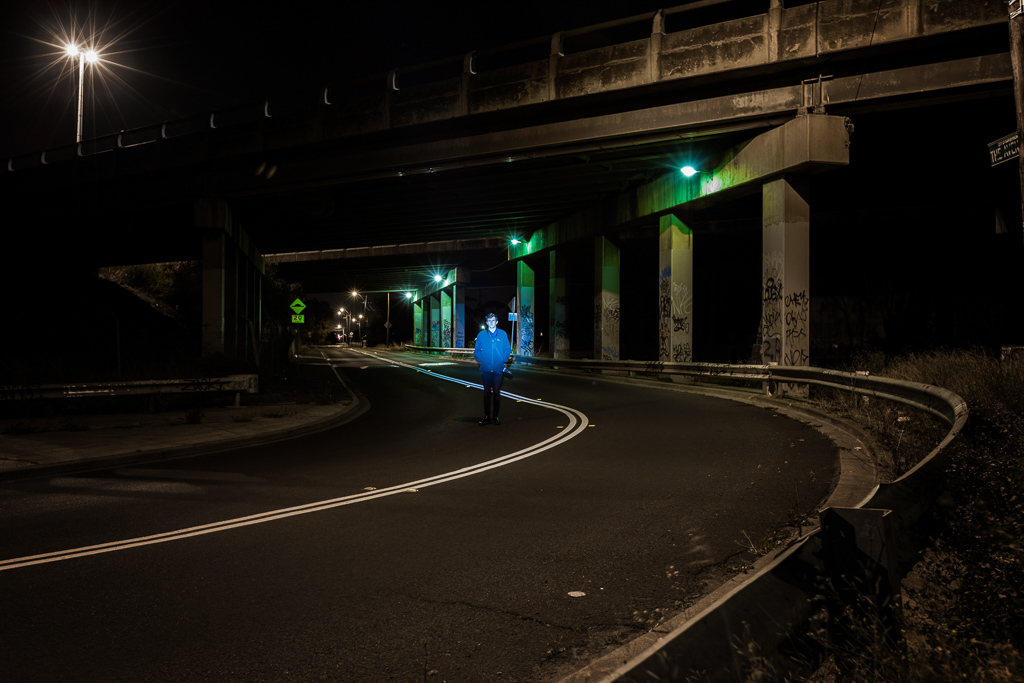 They’ll be coming up soon. It’s a busy schedule, so hopefully I’m man enough to pull it off…