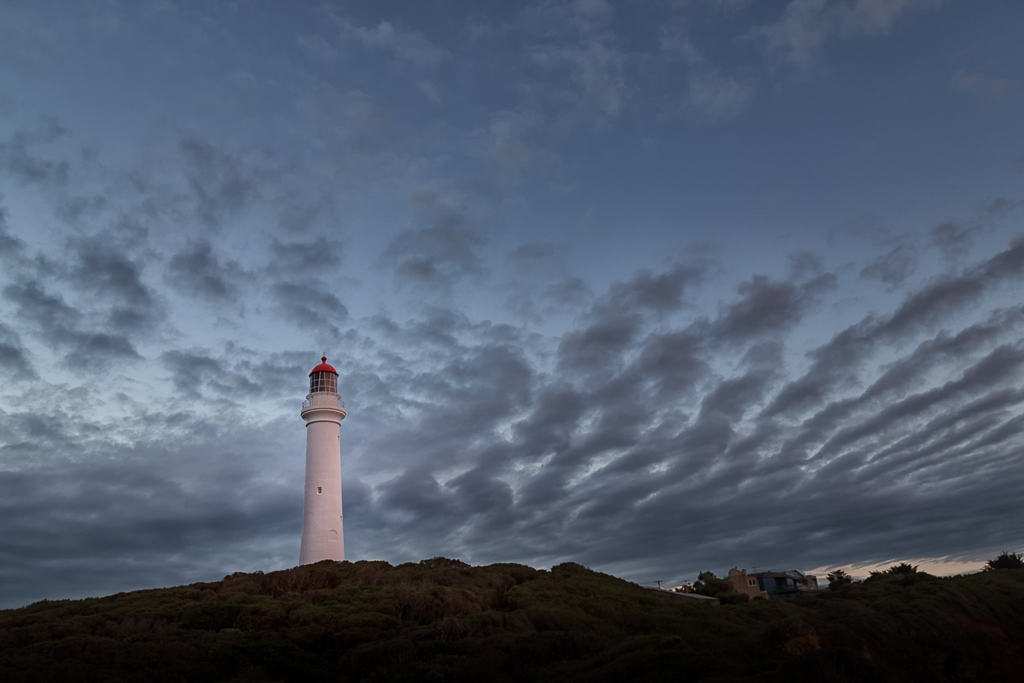 After my last post where I had dem ole walkin’/bloggin’ blues, the keen reader will notice I’m still alive and haven’t put my head in the oven. I think the off-kilter feelings were brought on by too many Lerderderg Gorge outings and I’d come down with the little known ‘lerderdergitis’.

As I’ve said before, if certain walks can fit a genre, then all the ‘Derg ones are classified as ‘grim’. I guess there’s rugged beauty in your lungs protruding from your mouth after another vertical spur climb or the sweet, comforting feeling of a rock being slammed into the kidneys after falling over along the river? They’re just two good points of gorge walking. I’m sure there are others. Anyway, in the end I needed to recharge the batteries by going to somewhere mellow where things can be termed ‘pretty’.

So, last Saturday (there was something on in Melbourne that day. I hope I didn’t miss anything) I headed down to Lorne for some waterfall action. Just to confuse you though, that’s not what this post is about. The waterfalls will be for another day. On the drive I passed Split Point Lighthouse, Aireys Inlet. Over the years, I always slam on the brakes, hop out and then wander up to the coastal surrounds.

Guess what? Yep, Saturday was no different. One sight of the lighthouse and I was wrenching the steering wheel into a four-wheel drift and skidding into the car park. I leapt out of the car like a person leaping out of a car and raced up the nearby hillside with camera in hand.

I’ll let you in on a secret though. The Split Point Lighthouse is my nemesis of lighthouses. I’ve been there that often and taken so many photos, yet I still don’t think I’ve got my perfect picture there. Ahab has nothing on my white lighthouse. 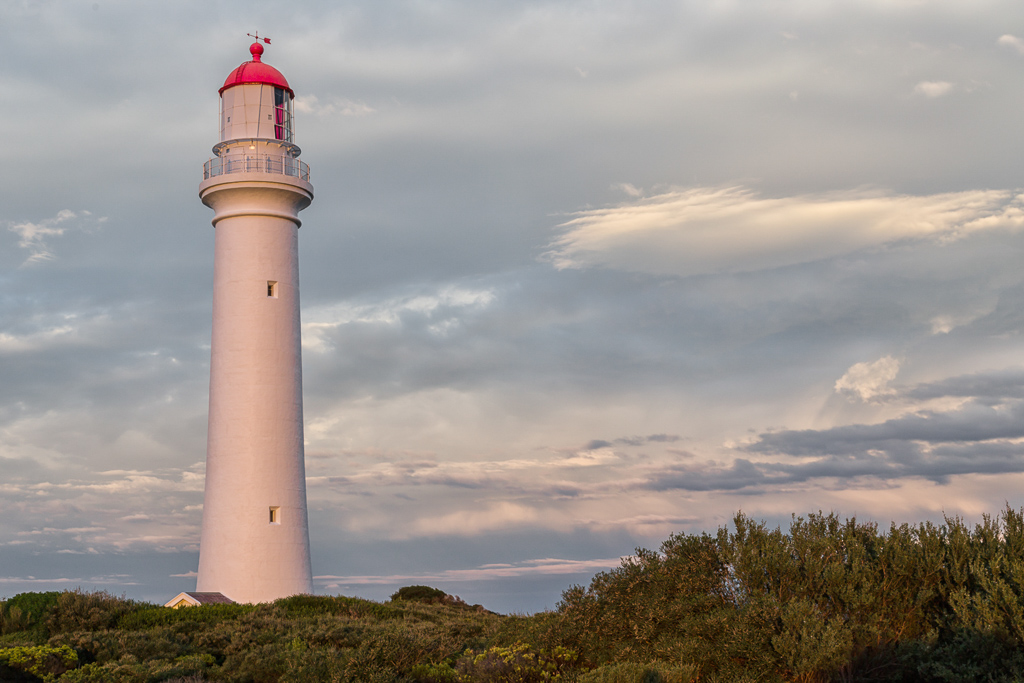 So what’s this post about? Not a lot really, but you’re going to get images from a handful of visits. I thought I should explain this, so there’s no jumping up and down saying, “What’s he on about? The sky is different! It’s not the same day!!” Before I start, how about a bit of background waffle?

When I first considered starting a blog, I was lying on my bed in my lederhosen and fishnet singlet, wondering what the overall topic was going to be. It had to be something I liked, so I mused, “Music? Nah, there’s a million music blogs… Movies? Nah, there’s a million movie blogs… Potatoes? Nah, I’d eat them before I could write about them… How about a man who was drunk and went to bed naked whilst eating KFC, yet blacked out and woke up covered in KFC grease, pieces of chicken skin in his bed and bones in his hair…? Nah, that could never happen. Okay… What about lighthouses????”

Yes, I considered soley a lighthouse blog, as I’ve been nuts about them forever. I had an idea to visit all of the ones in Australia and then write about each. Pretty cutting edge stuff, as I’d have a photo of me standing next to each one giving the thumbs up. I guess it’s completely insane when you think about it, but it’s not as bad as some of my other ideas. An example? How about walking around Australia on the beach. If there’s no beach, I’d have to kayak. No going to the top of the cliffs. How many years would that take? If someone would sponsor me I’d do it. I’m sure it would be blog-worthy as well.

Anyway, the lighthouse blog theory was put on the backburner, but it’s been on my mind as a possible sub-blog. Then again, this one’s a ball-breaker. How could I juggle two? 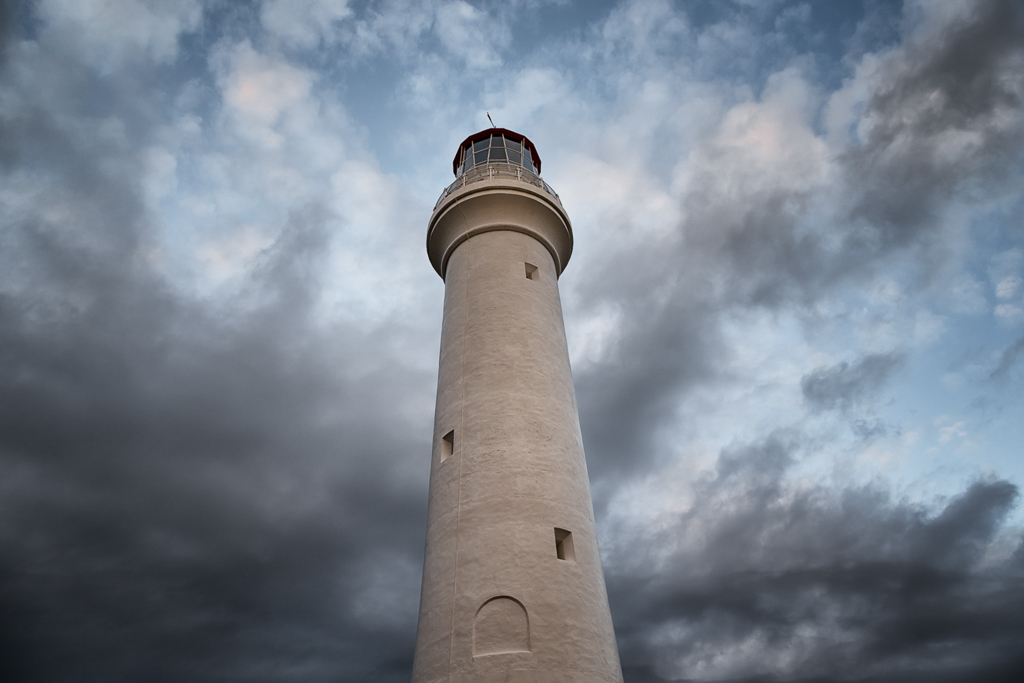 Back to the love affair. I’m not sure what the attraction is? Is it the silent sentinel guarding the coast keeping those smokin’ hot Sirens at bay? Some sort of Freudian erect shaft wonderment? Maybe it’s the ultimate job description, which appeals? “One person to look after lighthouse on rugged coastline and not have to talk to anyone else”. How good does sound?

I guess they’re all automated now, but that could be a positive. It means I wouldn’t have to do anything. Just sit back reading, sleeping and eating cashews all day, plus I’d have the ultimate bannister to slide down. A remote lighthouse off the coast would be even better, although I’d need broadband internet. There are limits to my hermit needs, as I’ll require high-speed internet to keep up to date.

Now, the Split Point Lighthouse. It’s not really in a remote spot and although built in 1891, it was automated in 1919. What? It didn’t even last 20 years before being automated? All the prospective hermits must have groaned at the time.

What gets me though, is I wanted to show you some ‘ye olde’ photos from my favourite image archive, the State Library of Victoria. I was expecting dozens, but do you know how many they’ve got before 1950? One. Yes, one. It gets even worse, as the inscription says it was taken between, ‘1920 and… 1954’. Huh?

Could they narrow it down a little? Can you imagine the photographer in 1953? “Damn, that lighthouse photo. Did I take that in 1920 or was it last week? I can’t remember.” Anyway, here it is. 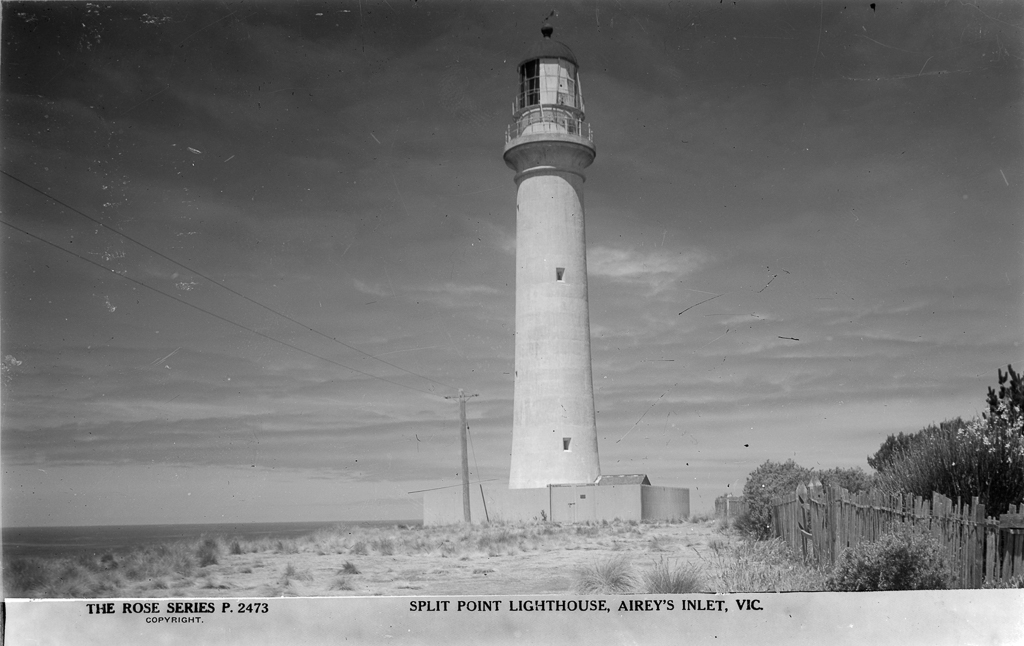 Umm… it’s not really setting the world on fire, is it? I’ve never even bothered lining it up for a ‘then and now’ shot. On my visits I tend to stand in the same position and hope for some snazzy light, especially in the early evening. Actually, I’ve stood in the same spot so often, I’ve got dozens of pictures which look identical. Luckily an unusual sky can differentiate the various snaps.

Just after sunset, there’s a period of light called ‘blue hour’. Just Google it and you’ll find ‘blue hour’ freaks all over the place. If conditions are right when taking photos, the deep blue will last for about half an hour. I think. Anyway, it looks nothing like this to the eye, but if the camera gives me this look, who am I to argue? 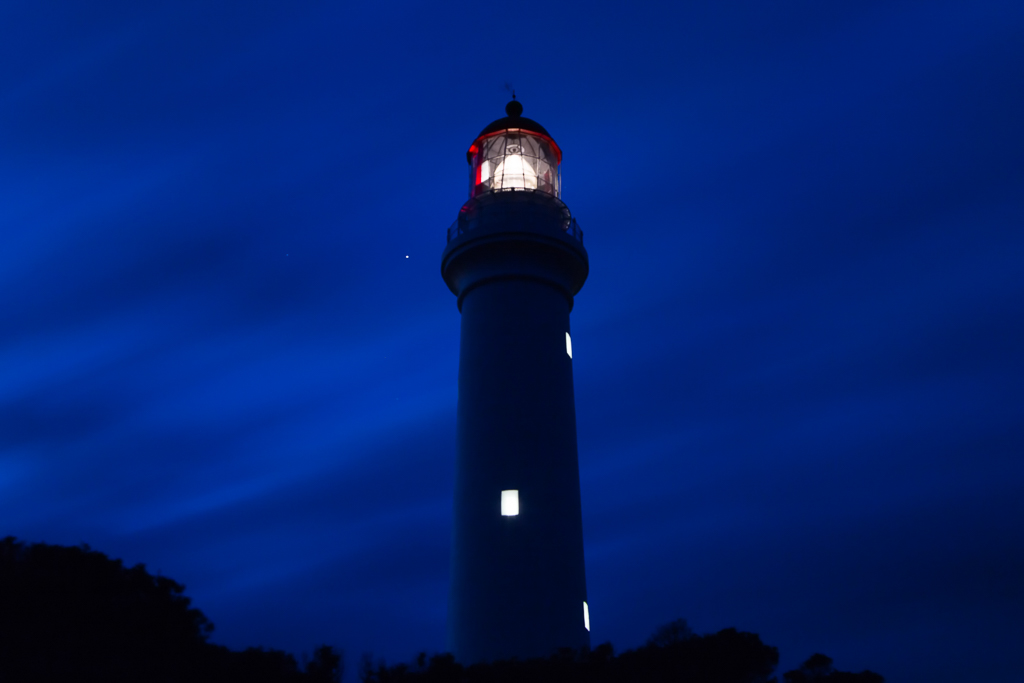 ‘The sky is blue and the dead are coming back’

Do you want to know how bizarre the deep blue can change? Believe it or not, but the photo below was taken only five minutes after the one above. 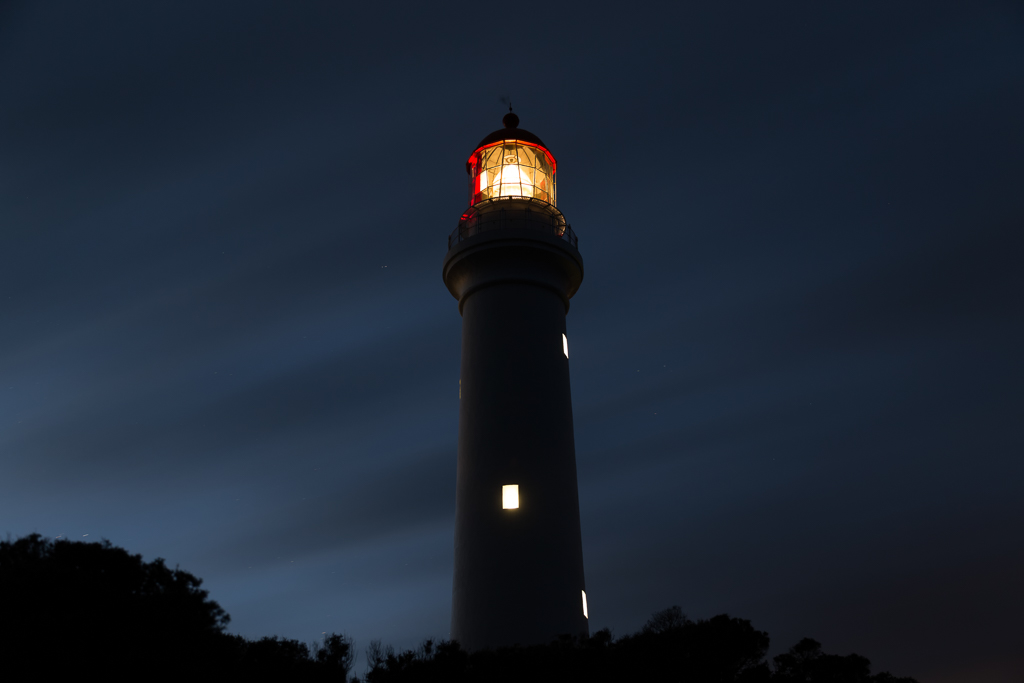 Back in August, late in the day, I wandered up the hill below the lighthouse. There was a nice view of Aireys Inlet with the sun getting low in the sky. Seeing how this is Aireys Inlet, I guess the inlet in the picture is Aireys? 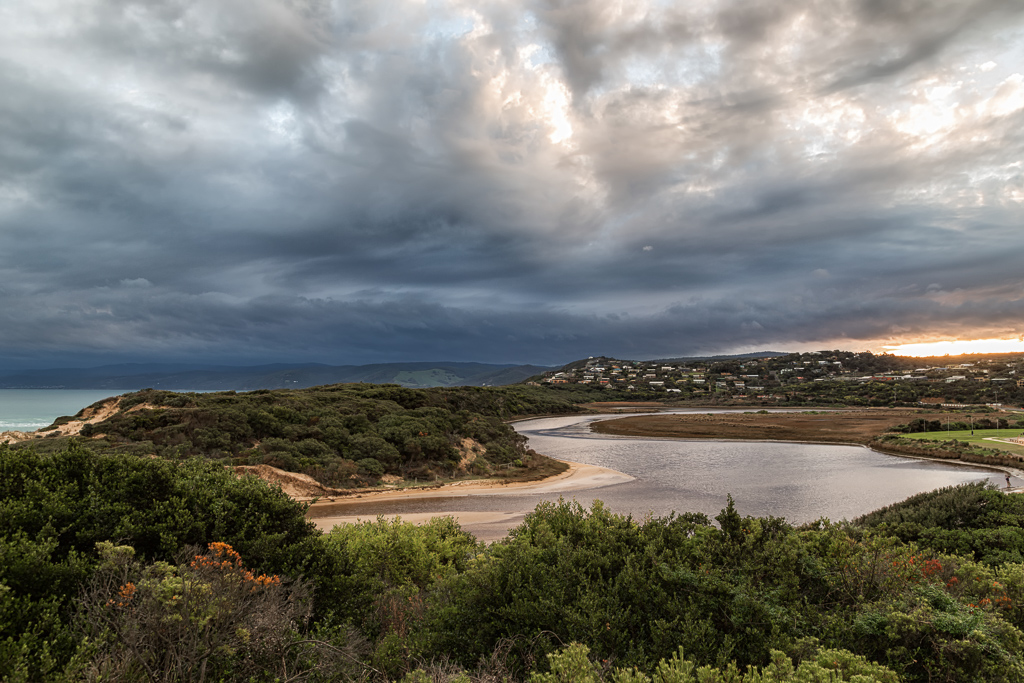 There was more to come, although with a touch of the Twilight Zone, when I reached the top of the hill it was last weekend. Here’s the ocean view across Fairhaven Beach, as heavy showers continued to sweep by. With sights like this, why would you want a cloudless sky? 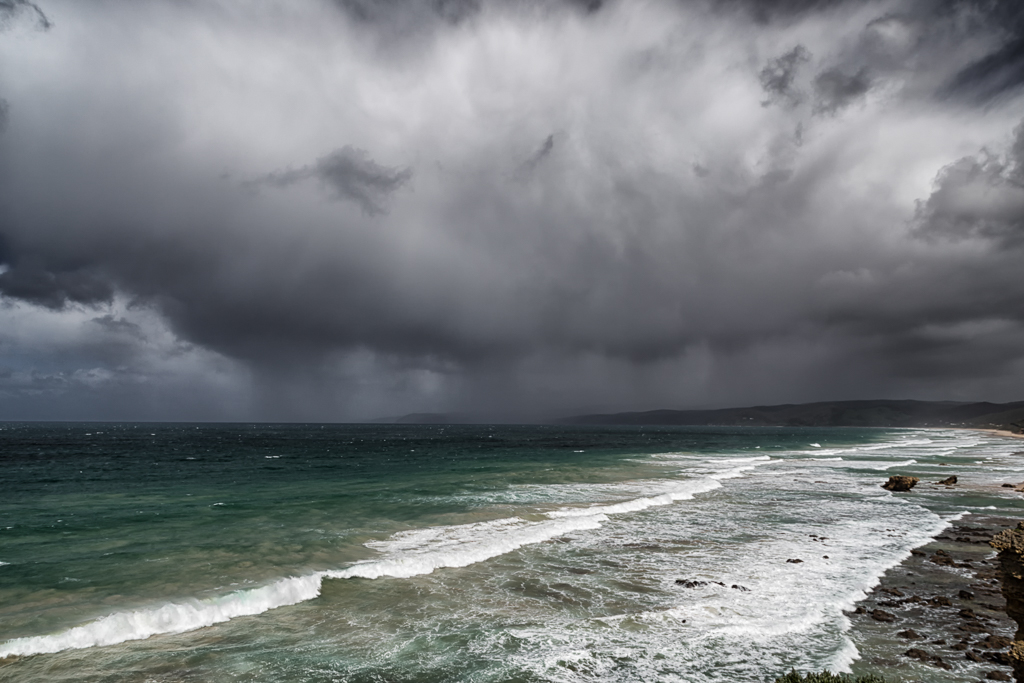 Don’t worry, my head’s on a swivel in this area, so the lighthouse was also getting photographed. The only trouble is I’m not sure when this one was taken. I can narrow it down to, ‘this year’… 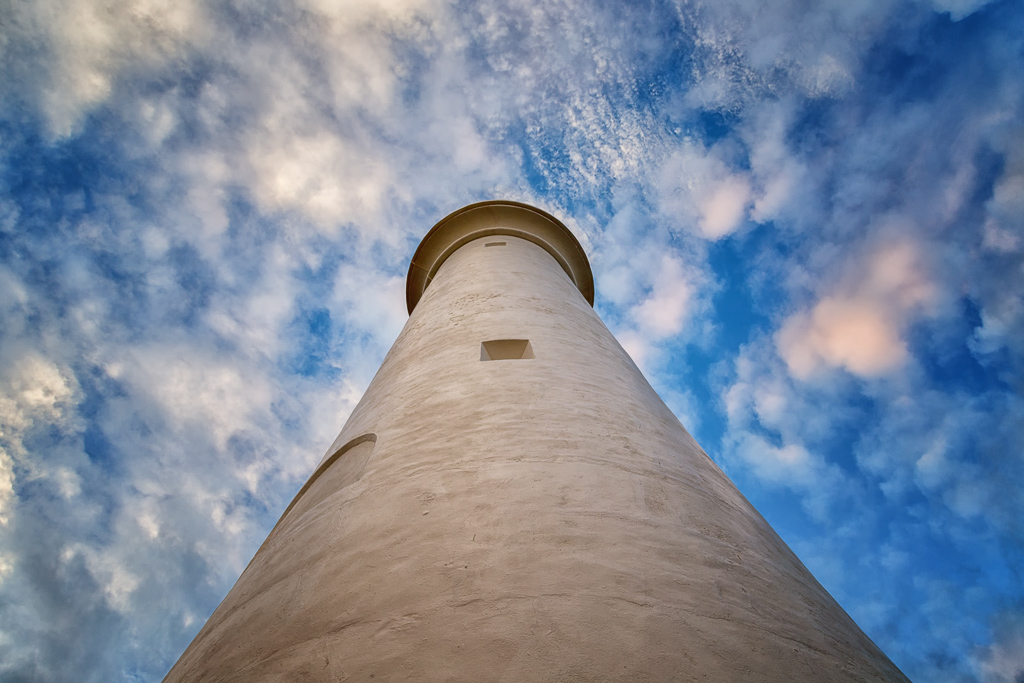 As it’s usually late in the day when I’m stalking the lighthouse surrounds, it’s odds on there’ll be some nice shots across the water. 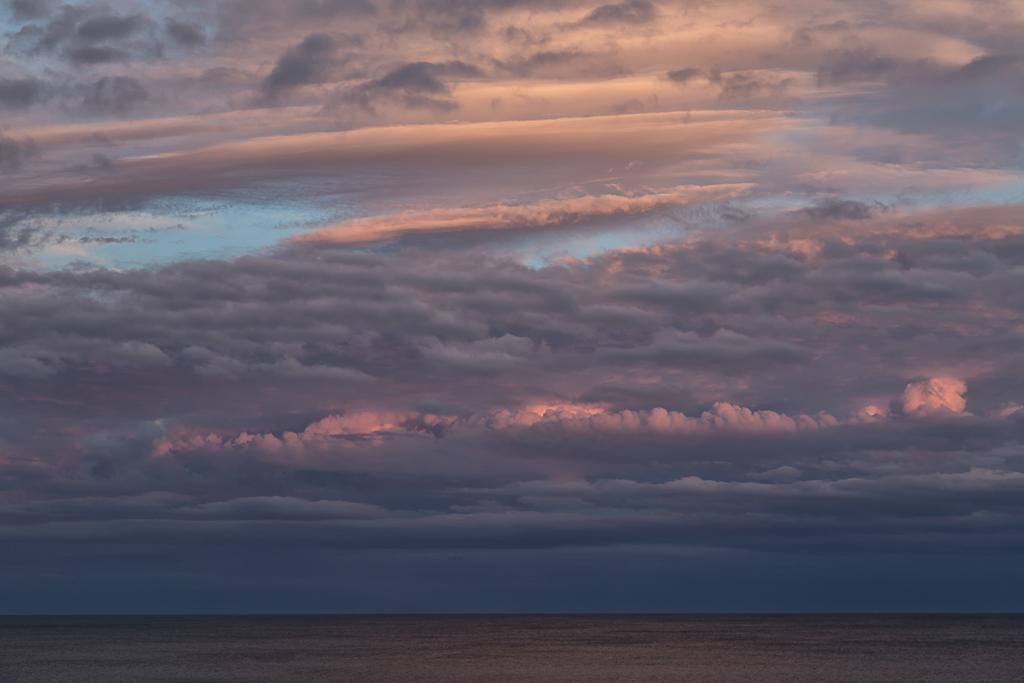 Do you want to see what I mean by my photos being in identical spots? Here’s last Saturdays showery weather… 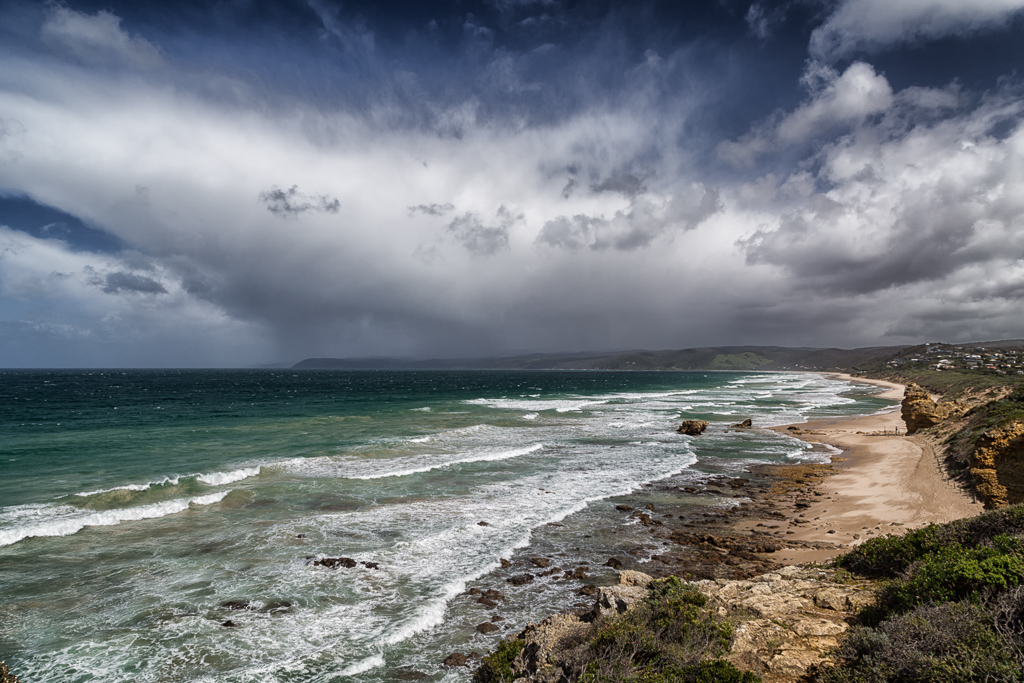 …and the same spot, after sunset. 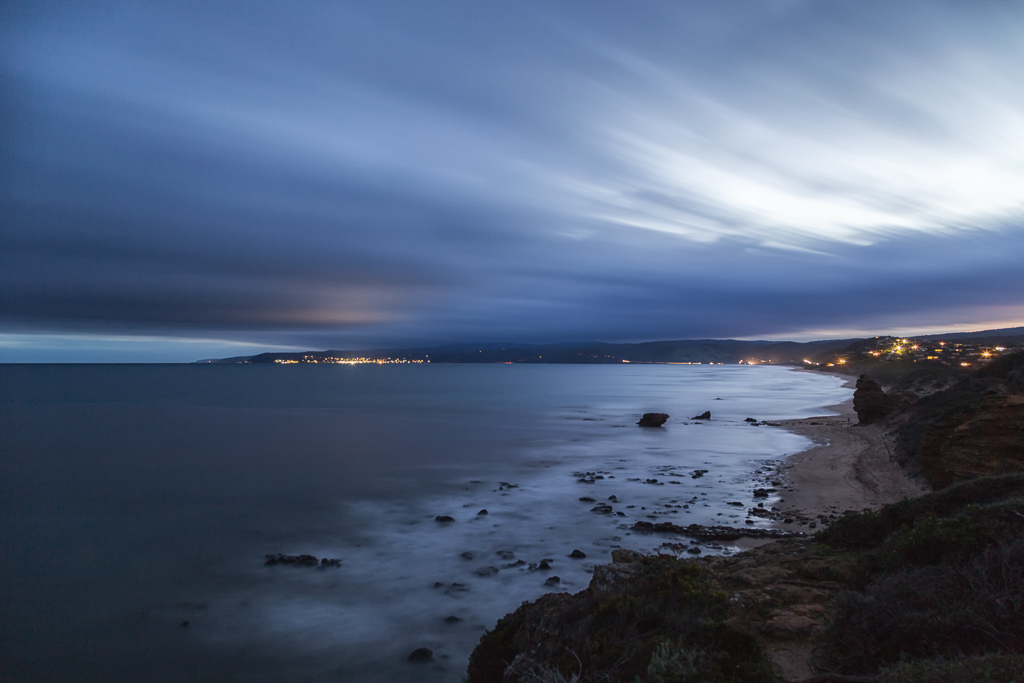 I really need to alter my game sometimes, otherwise I’m condemned to the same photos for eternity.

What happens when the sun goes down? Well, this is when my nemesis has kicked in. I’ve lost count of the number of pictures which are slightly out of focus. I just can’t seem to nail this stinkin’ lighthouse consistently in the dark. I’d like it to be in all its glory, whilst surrounded in stars. Frustratingly I haven’t been able to do it, so on my last night sojourn I gave up and stood about ten feet away, which guaranteed it’d be in focus… 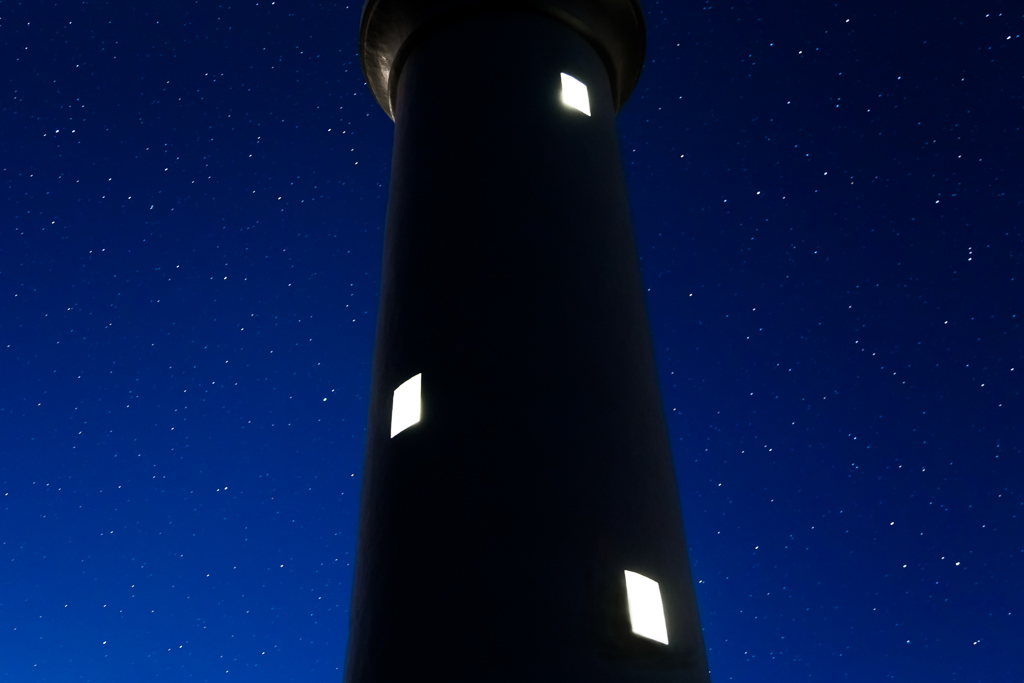 If I pick up a 2.8 wide angle lens, I’ll launch an all-out assault on this sentinel and if successful this post will be revisited. Until then I’m compromising by shots like the last one in this post. If you can’t get the stars, then how about a short exposure to black out the lot, instead of the few lights…? This will have to do for the time being… 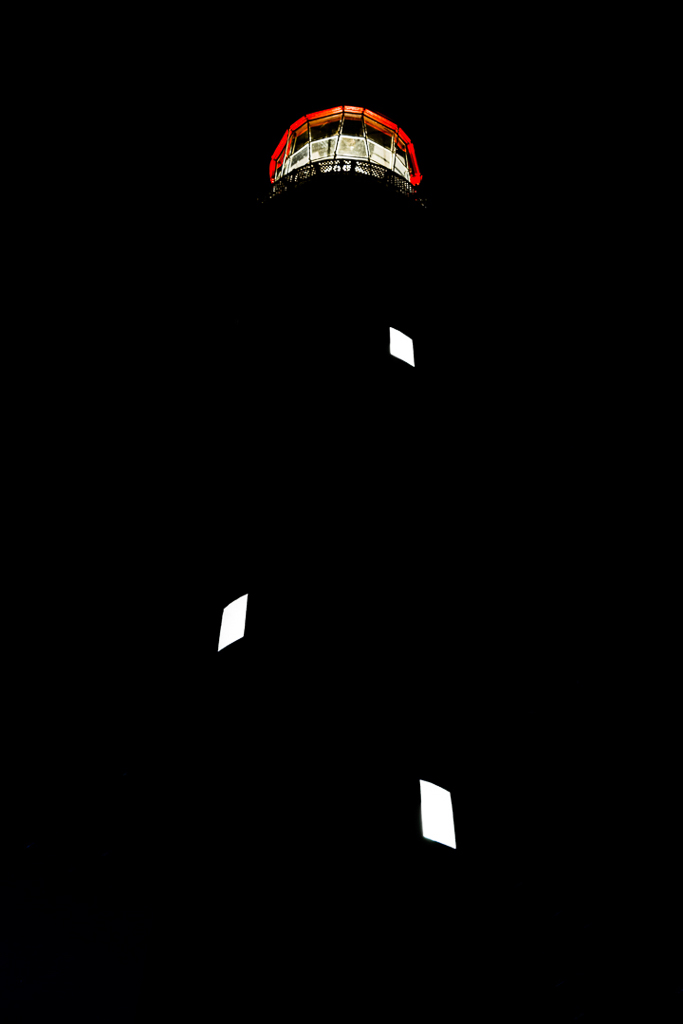 Well that was part of last Saturday. The second part of the day was a muddy, sloshy affair around waterfalls. That might be the next post. By the way, guess what I did on the Sunday? Yes, believe it or not, but I was deep within Whiskey Creek in Lerderderg country…