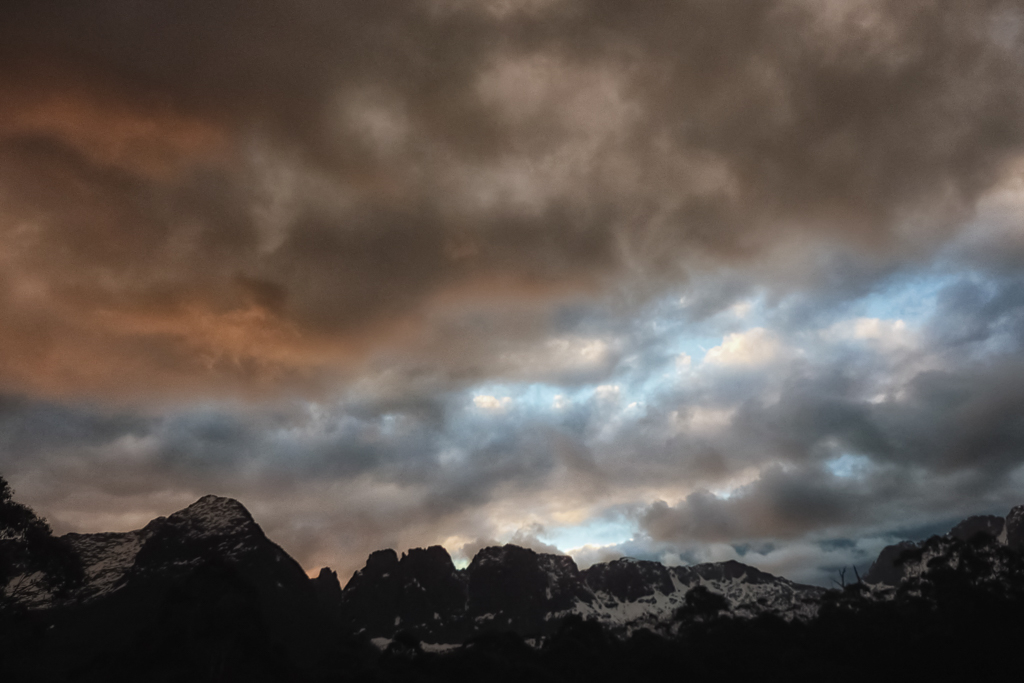 I’ve gone retro again, but don’t worry. I looked through my old photos of this walk and just realised there’s only two days to go after this one, so I might as well get it done. This leg from Kia Ora to Bert Nichols ended up being a straightforward day with calm weather and the walking was comfortable.

Actually, if it wasn’t for the pictures I took on this walk, I would’ve forgotten a fair bit of it. How this possible when it was only four years ago? I’ve no idea. It seems a lot of these hikes blur into one though and it’s hard to pick something out which was notable. I must say,, a quick scan of the images and parts of this day are quite vivid, as this was the ‘day of the waterfall’.

Before starting, I must mention this before I forget. Don’t you love a saying that’s said incorrectly? How’s this one. I read a comment where this bloke was bragging he was at home during a work day and he was listening to his music ‘full ball’. Huh? Surely he means ‘full bore’? Then again, he was at home, so maybe he was just listening with his cods swinging in the breeze?

Right. Kia Ora Hut was quite pleasant and especially as I had it to myself. The previous day through Pelion Gap had been a bit stormy, but come daylight the sun was shining. Mind you, the clearing of the cloud meant any heat had also being sucked out into the sky. It was freezing, but the surrounding mountains were wonderfully clear. 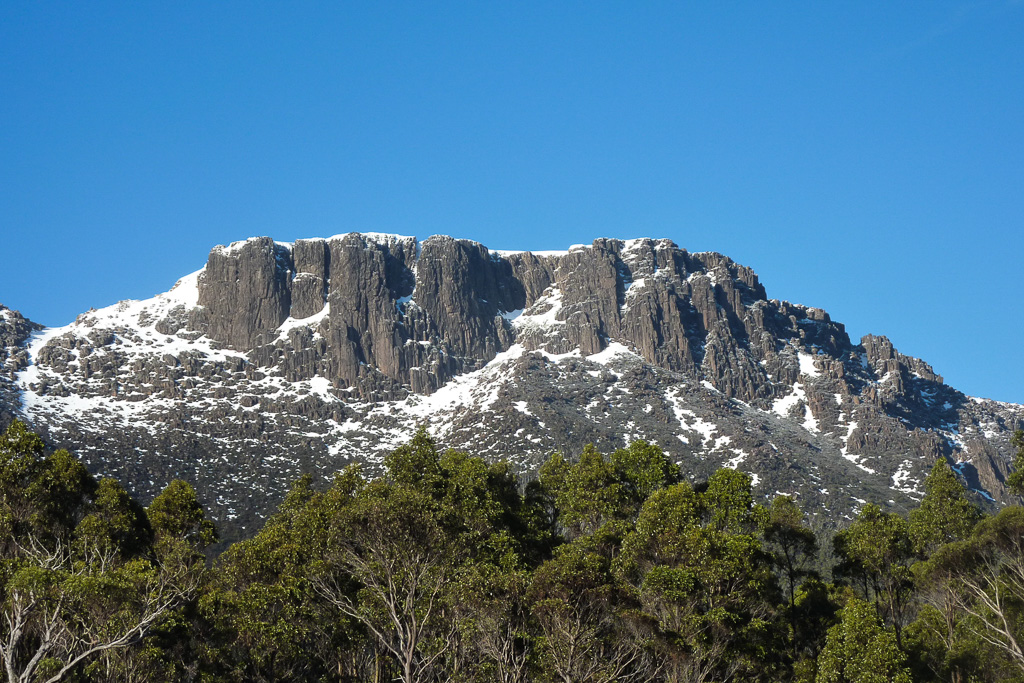 The Du Cane Range sits at the back of the hut and there was still enough snow up there to make for a picturesque scene. 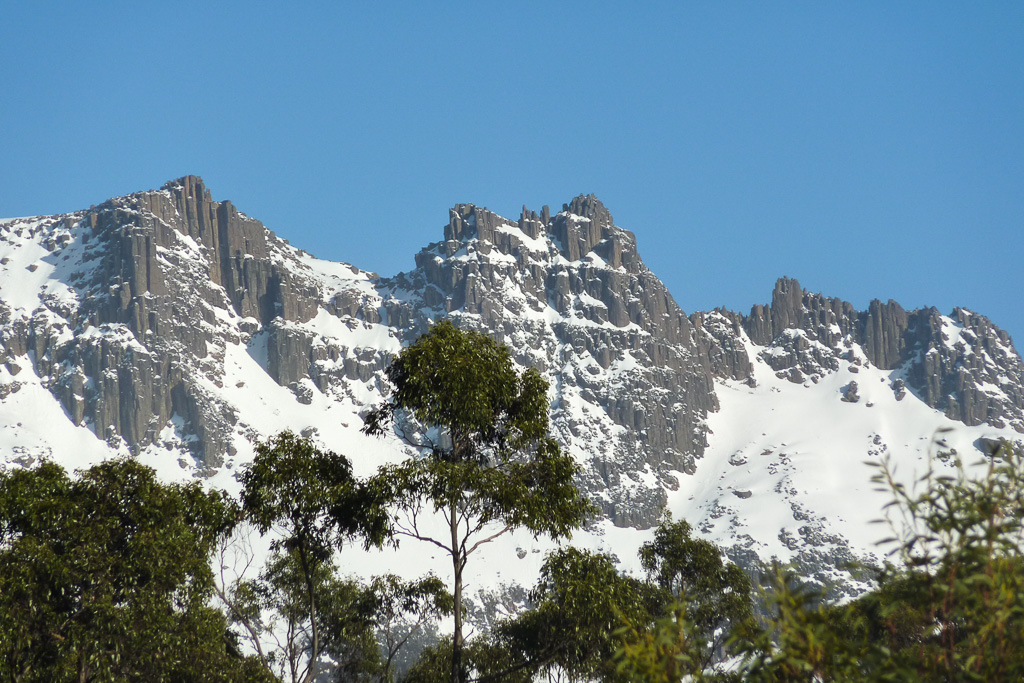 I didn’t have a long day ahead of me, but judging by the times on the photos I was out and walking by 7.30 am. Maybe feeling frozen got me moving earlier than I needed to?

There were a few bonuses of no walkers being around. One is I was saving energy by not having to speak (other than swear at myself) and the other was sheets of ice formed on the track were all untouched. Most small pools of water were frozen over and I noted a strange sight in a few of them. Imprints of leaves sat on the icy surface… 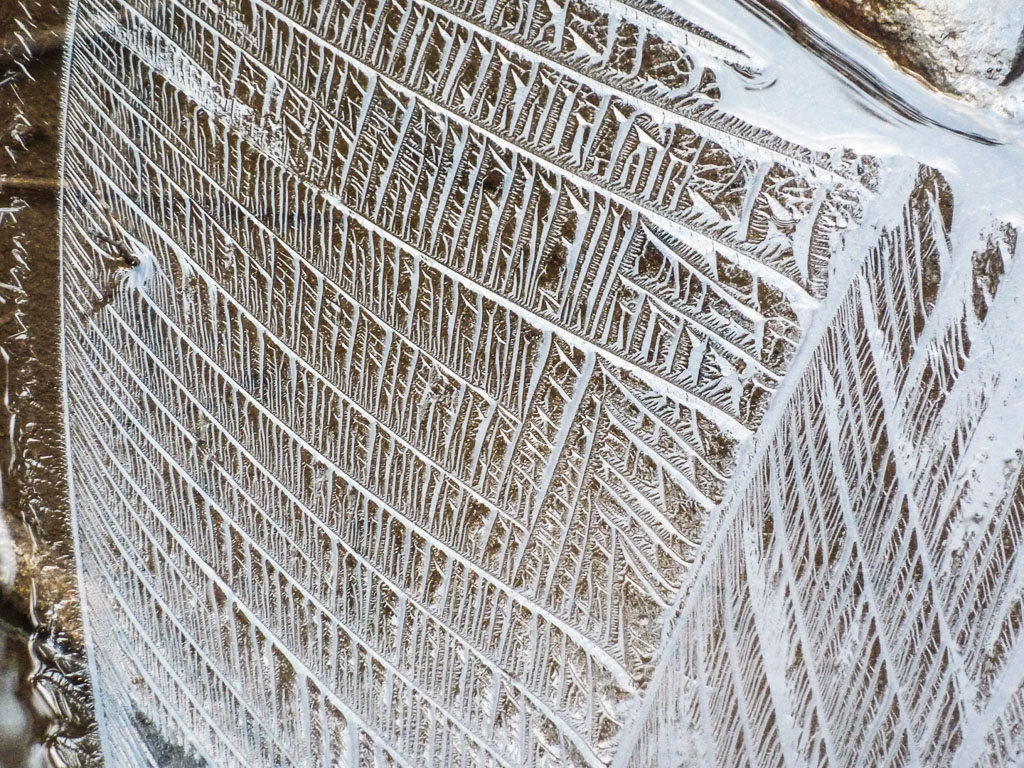 …but, where were the leaves which left the imprints? 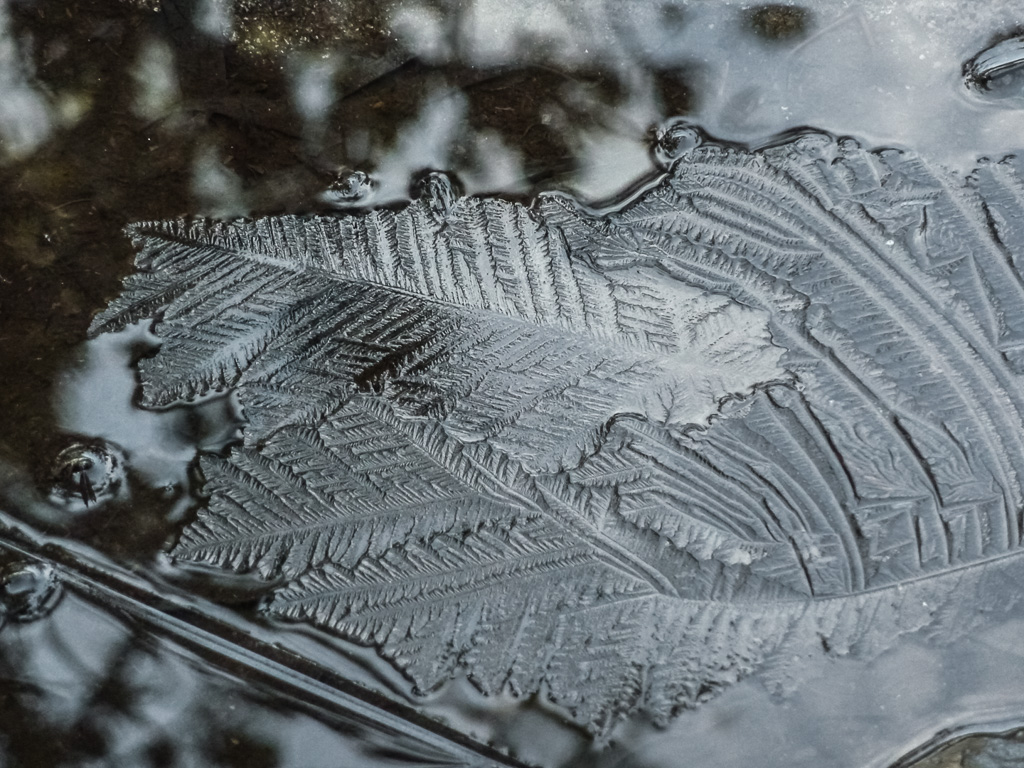 I’m not sure how that happens, but it was quite common. Anyway, I moved on and my first place of interest was Du Cane Hut. This is an emergency hut now and the following year it was a mental lifesaver, as Ben and I finished in the dark after a long day crossing the Never Never.

That particular day was one reason I took up blogging. Simply, the horror had to be told and although it was in the early days of the blog where I had no idea how it all worked, the post is still sufficient for what Ben calls, “One of the worst days of my life.”

On this occasion, a year before the horror, Du Cane Hut was bathed in sunshine… 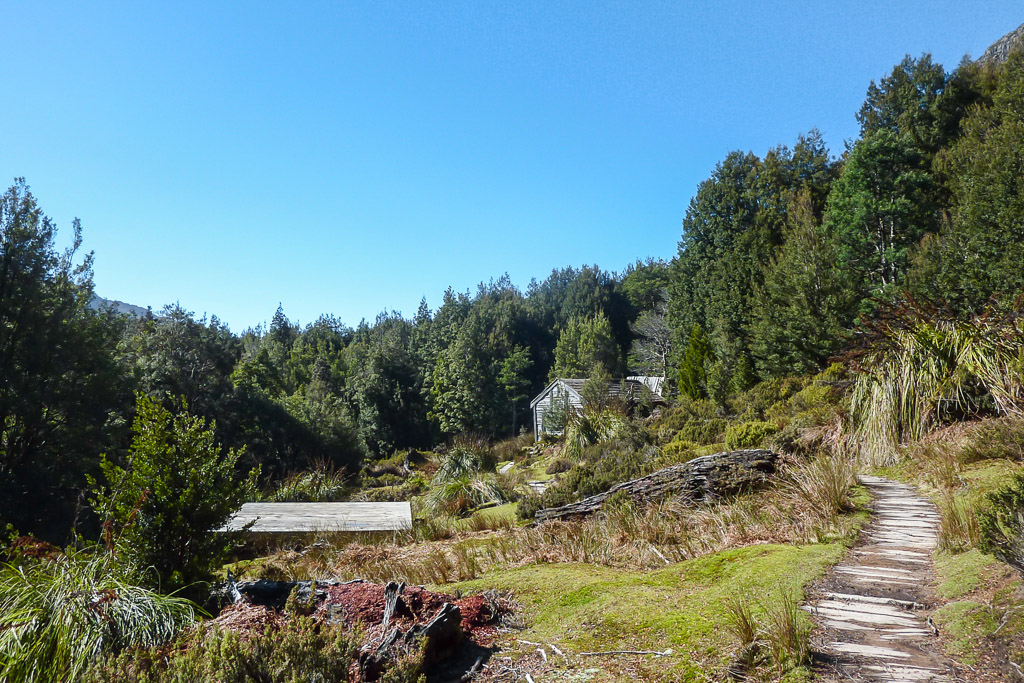 …with the mountain ranges towering behind. 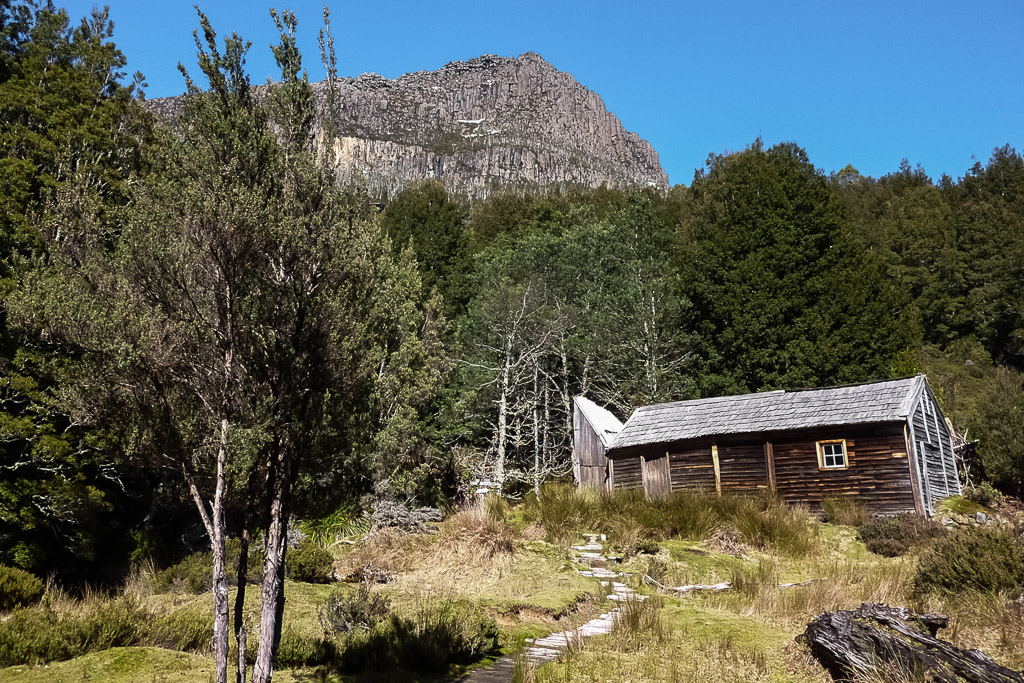 I had a brief stop to sit in the sun, before pushing on to my main aim of the day, which was some waterfall watching. 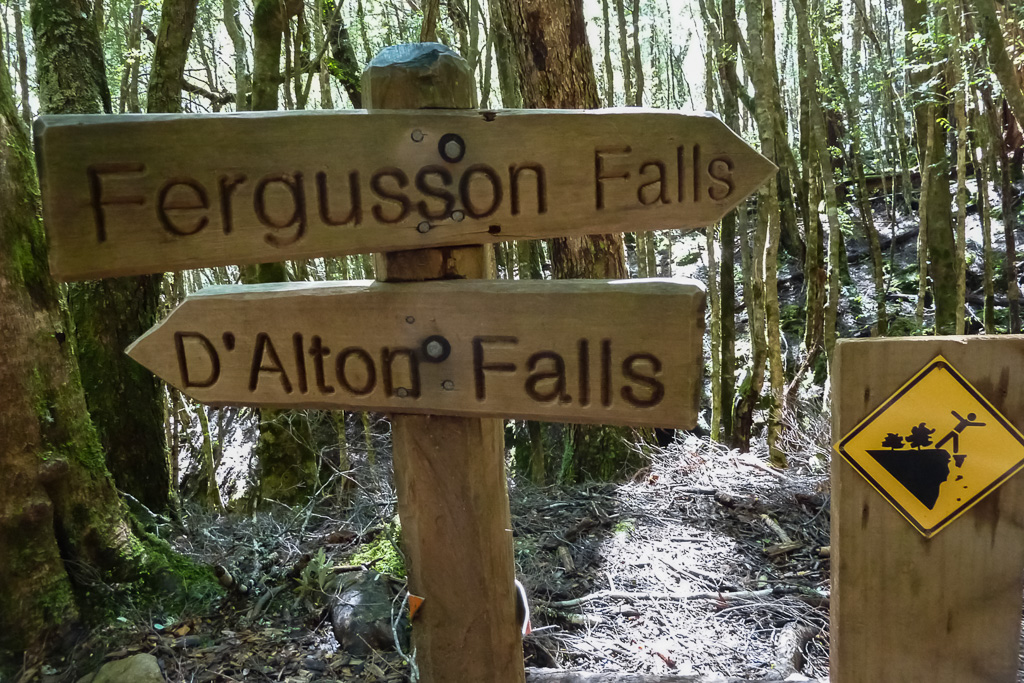 …but, I have a bit of a problem. I’ve got a series of photos of teeming water, but no idea which waterfall is which. Mm…

I dropped my pack and went for a wander. I wasn’t quite sure what to expect, but I should have had an idea as a roar of water could be heard from a fair distance. I came to the end of a path to be confronted with a waterfall, which although deafening, was certainly impressive. Judging by the sequence the pictures were taken, I’m assuming this is Fergusson Falls. 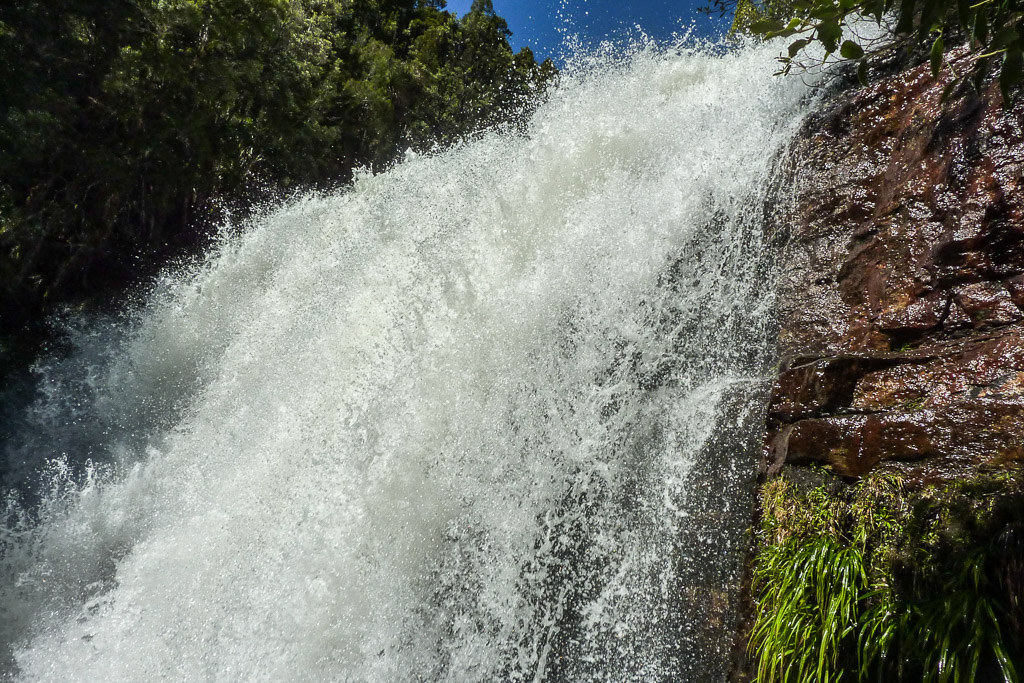 Standing only a few metres away from the drop, it certainly was intimidating. I even took a couple of videos, but again didn’t put much thought into it. It was more of a, “Hey look, the camera has a video button” sort of method. I took quite a few pictures though, as the water created a cloud of spray… 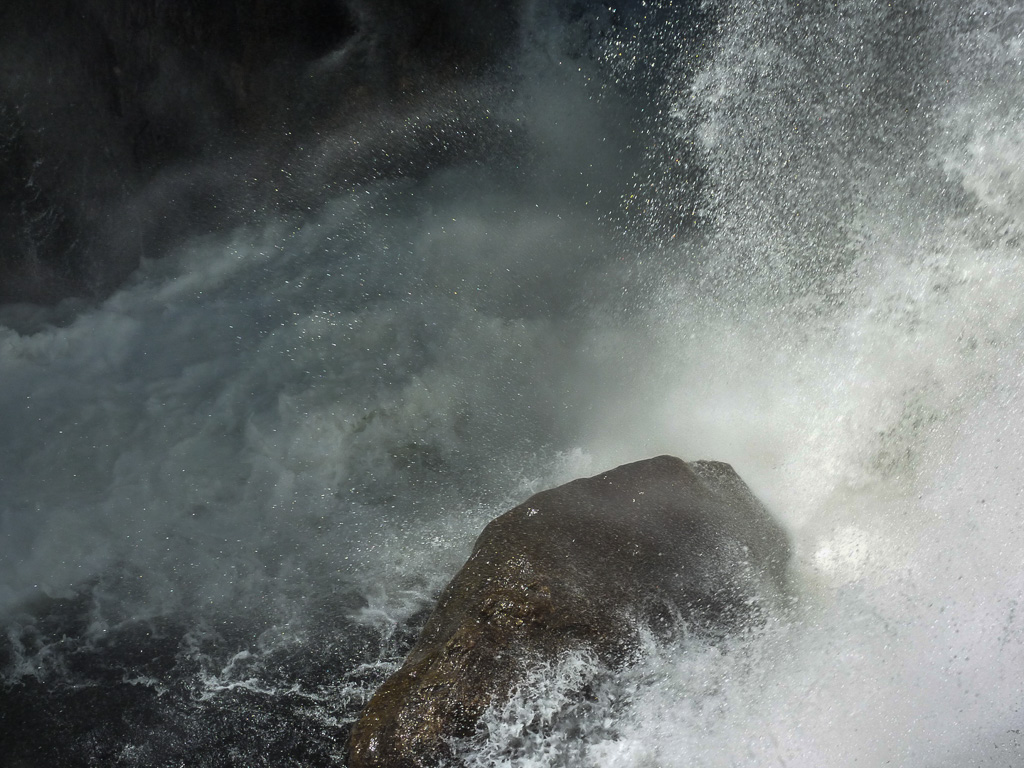 …which filled the surrounding air. 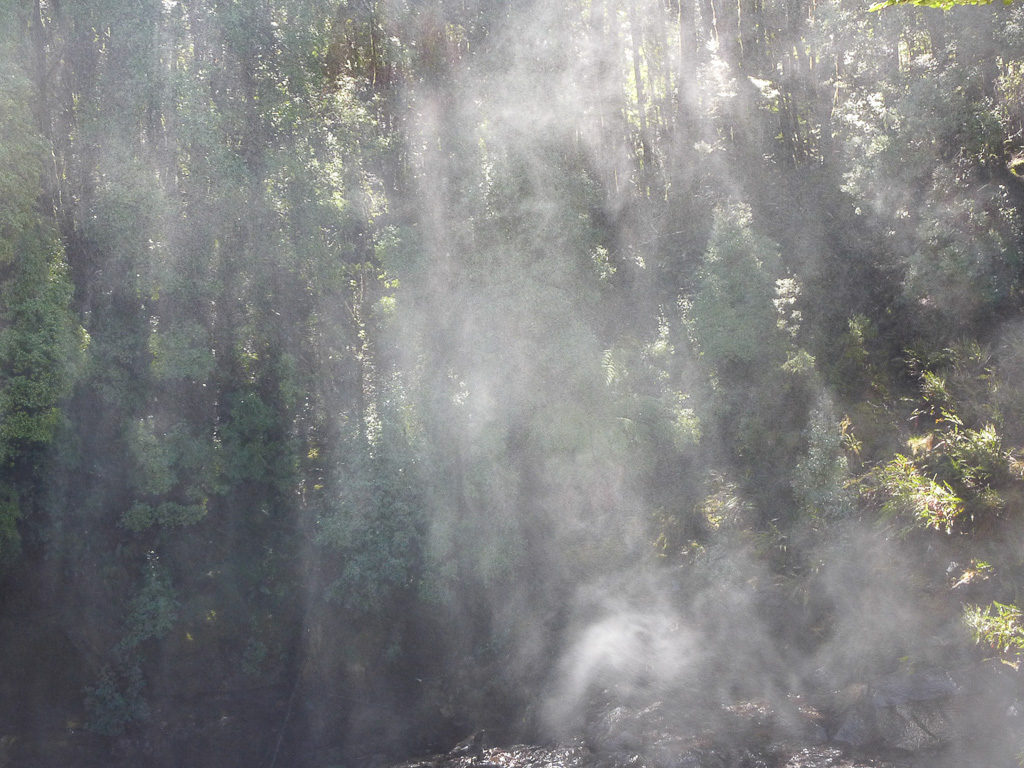 There’s something about a decent waterfall. I could sit down and watch for hours the way the water flowed and foamed. As you can see I spent some time… 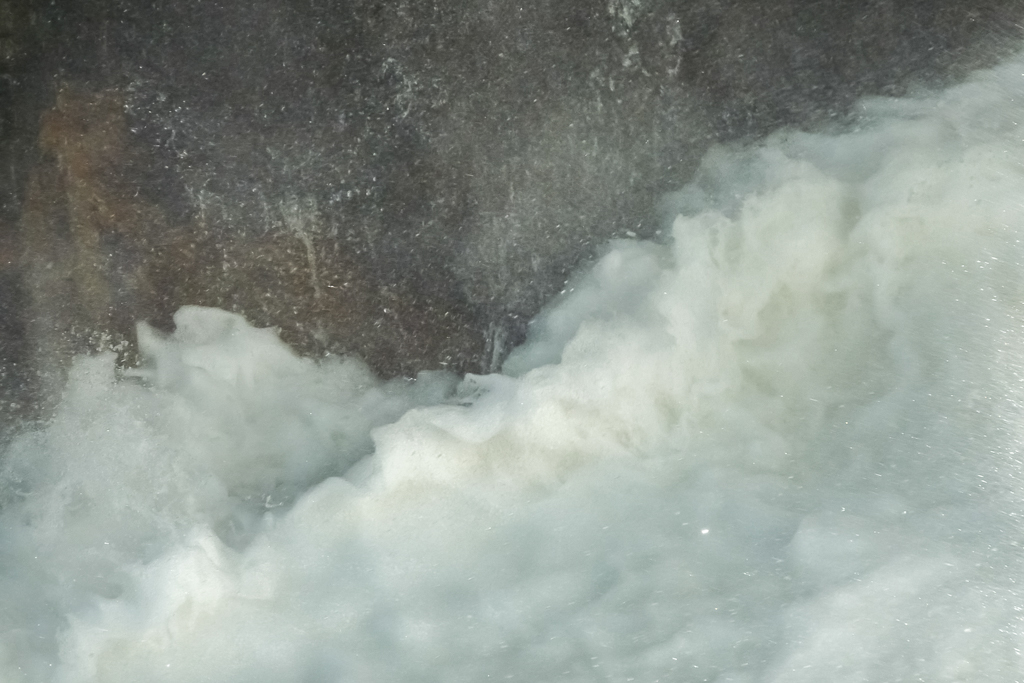 …trying to capture it from different viewpoints. 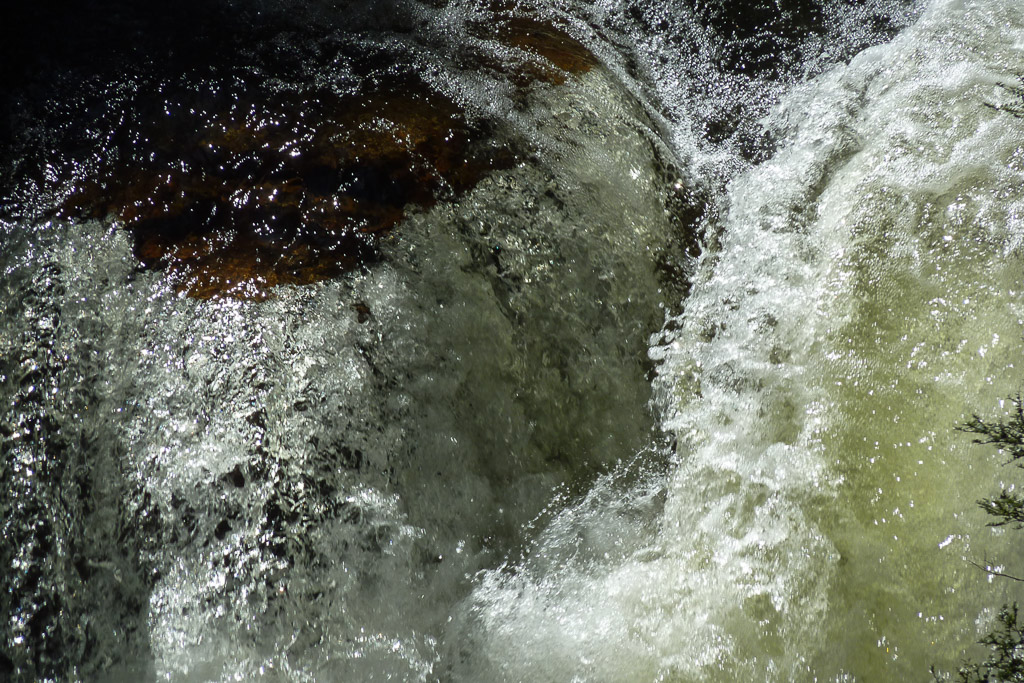 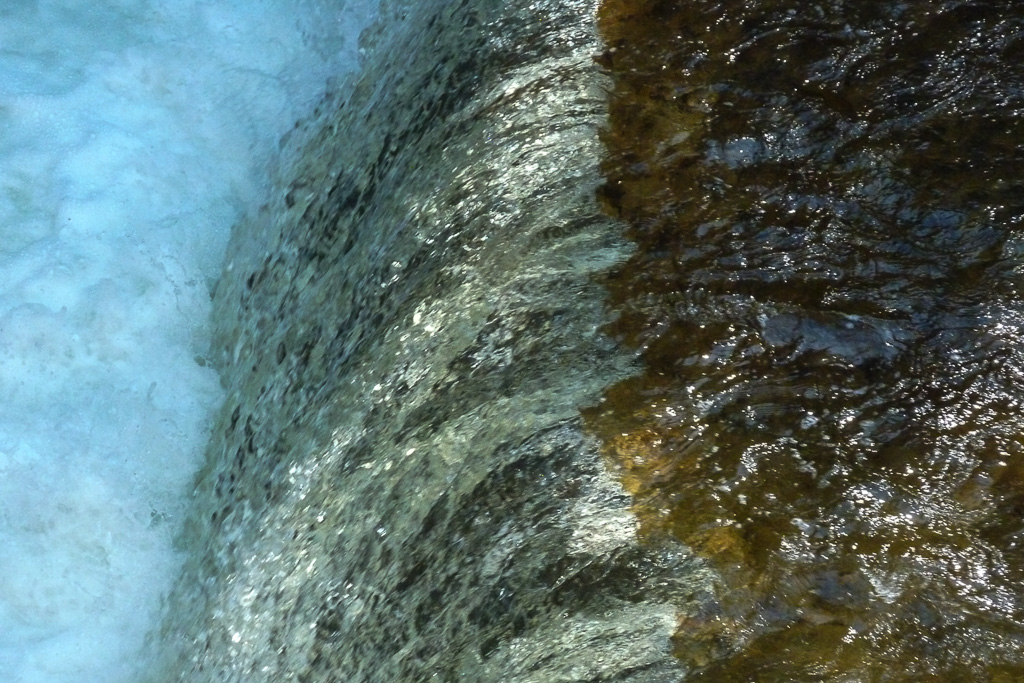 …before moving to Hartnett Falls. I’d read this was the most impressive in the area, so it was definitely on my hit-list.

Reaching it, I took the traditional photos, but I was more keen to get down to river level and have a closer look. Dumping the pack, I made my way along a narrow descending path until I reached a point upstream where I could jump down onto the rocks.

I had an idea I’d walk up close and get some magnificent pictures. Photography is never like that though, is it? Great plans don’t seem to translate into reality when it comes to snaps. The wet rocks were slightly treacherous and you may be thinking by my reputation I fell in. Well, no I didn’t, but what ruined my photo expedition was the amount of spray in the air. It was full blown soaking and my little dry weather compact was not liking it.

Looking at next picture, I’ve no idea how I didn’t slide off the slippery rocks? I wanted to capture the fine mist around me, so at times I’d turn my back to the falls and snap a photo, whilst keeping the camera dry. I remember thinking I should have worn my raincoat, as I was getting pretty wet. 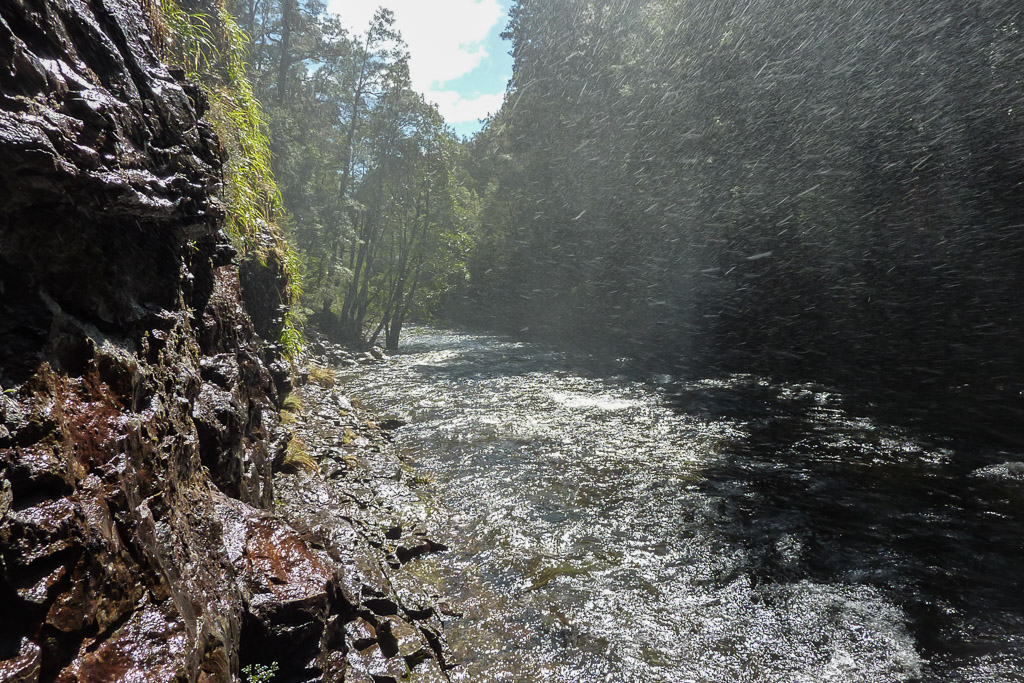 Finally, as the rocks narrowed and I no longer trusted myself to stay upright, I took a couple of pictures of the falls before turning around and heading back to drier safety. Earlier on I’d imagined standing beneath the falling water and capturing some inspiring shots. Mm… It didn’t really work out that way. 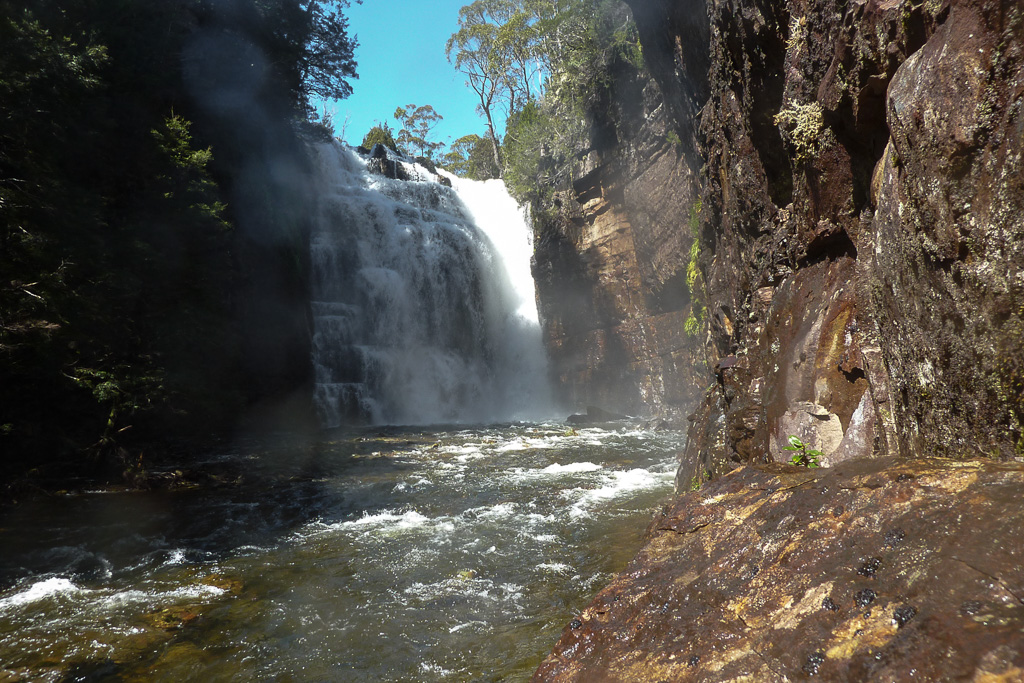 Hartnett Falls and a wet camera

I certainly wasn’t getting anything to rival Ansel Adams, so I backtracked and headed up again. Reuniting myself with my pack I continued on.

There was a slog up over Du Cane Gap and then a breezy downhill run until reaching the imposing Bert Nichols Hut. I’d show you some more pictures of that section, but they seem consist only of mountains and trees. I scanned through them, but as they all appear to be the same, I gave up trying to upload any.

Bert Nichols Hut is a little controversial. Firstly, it’s slightly massive and it seems to generate a fair bit of angst as to being poorly designed. Allegedly too large inside and with high ceilings it seems like a fridge at the best of times. There’s a small heater, but I didn’t even bother with it. I guess it’s being designed for the peak periods where the Overland Track is jumping, but on my visit it was slightly ghost town-like. Again, I had the place to myself and in the eating/hang out area, have a guess where I sat? 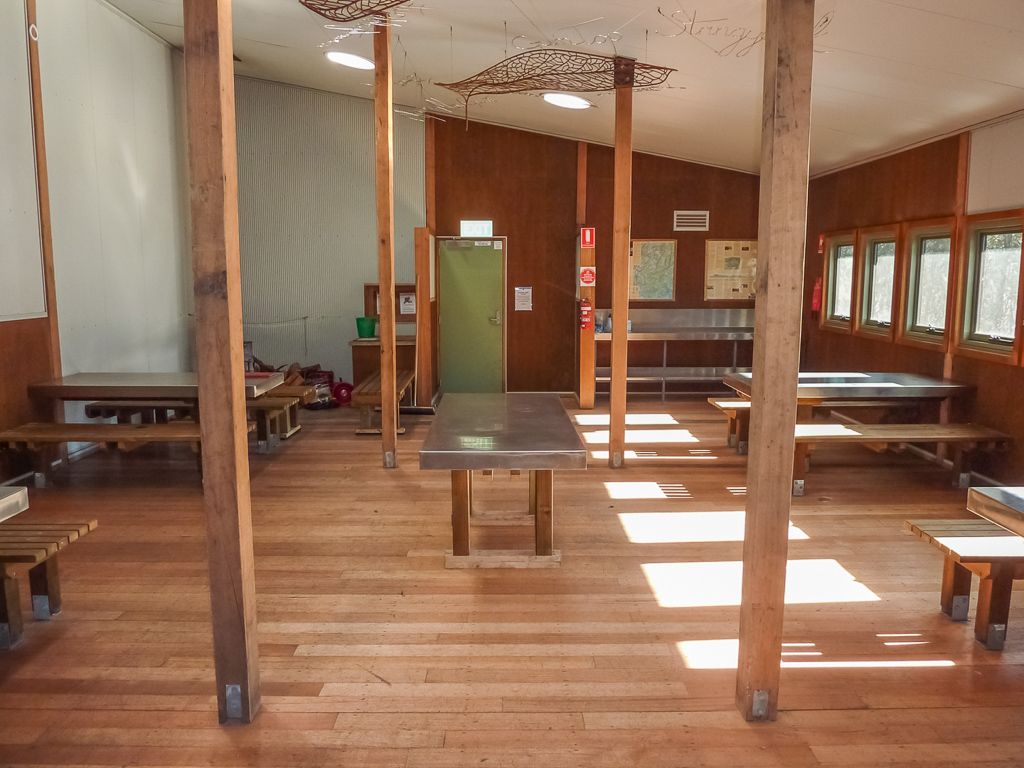 If you guessed on the tables in the sun on the right, you’d be correct. It was very relaxing on my own and I did feel pretty comfortable in there. I reckon I could have snoozed, but with the sun getting low in the sky I thought it was best to go outside and watch the sunset.

The ubiquitous Du Cane Range lines the skyline and with the sun setting behind it, I wanted to be comfortable. How comfortable? Well, there’s a huge log out to the side, which seems to have been cut into the shape of a banana lounge. Look, here I am sitting on it… 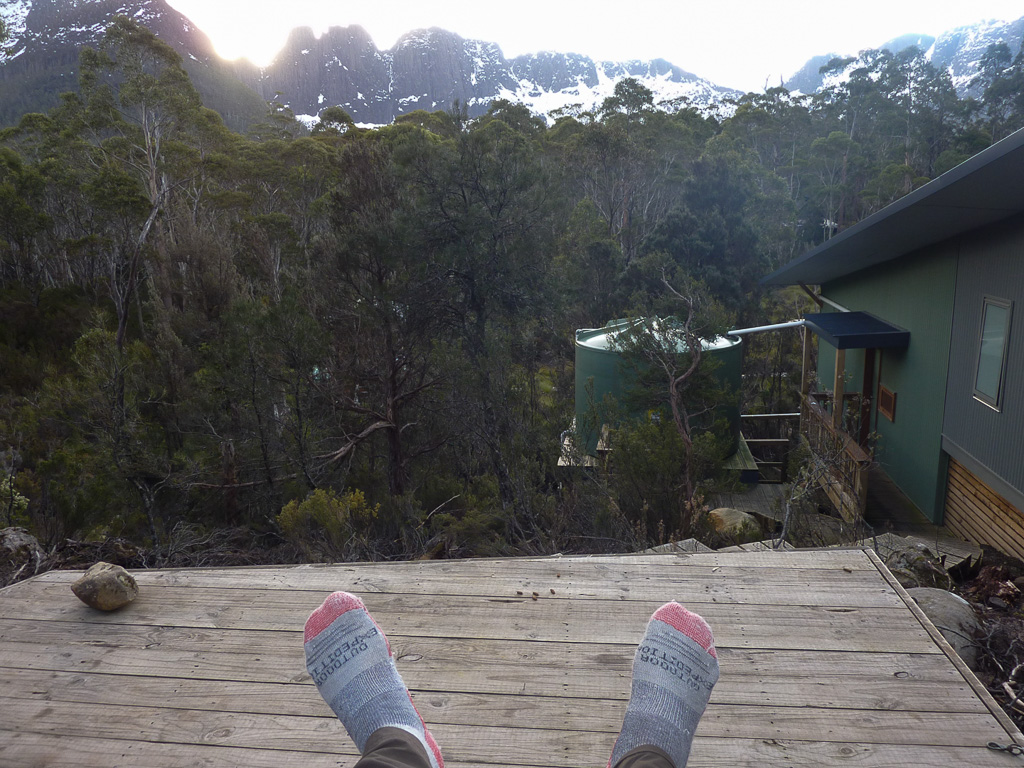 …and if you don’t believe its lying down capabilities, here’s another view. If you’re wondering, I do have my boots off. I don’t hike in socks normally. 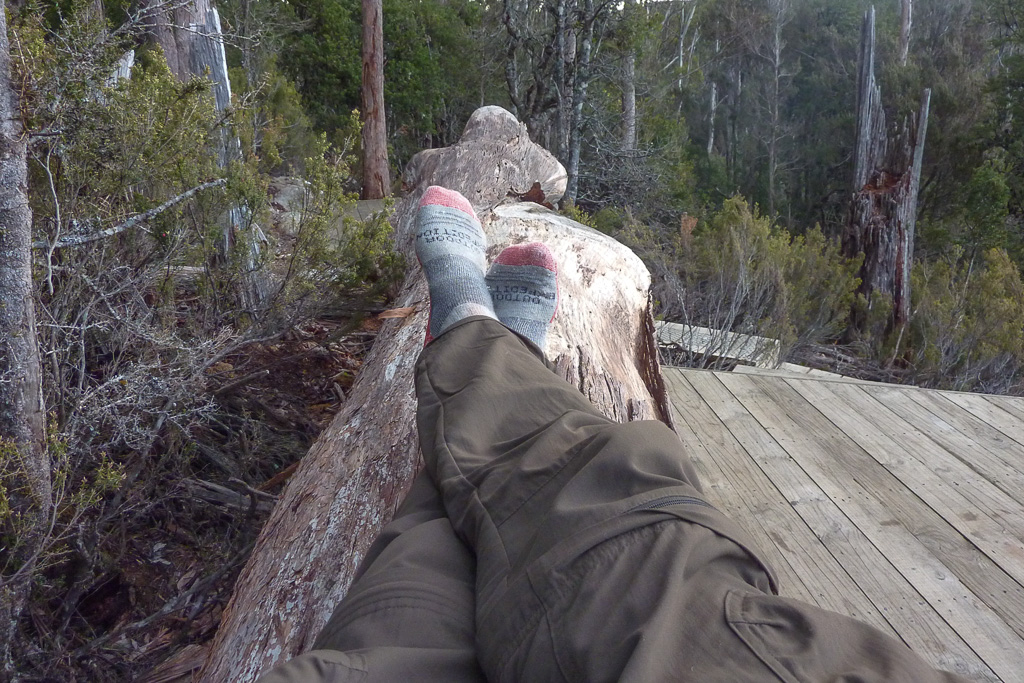 So, in my timber lounge chair it was time to relax through twilight. There was a blaze of light, as the sun dipped below the ridgeline… 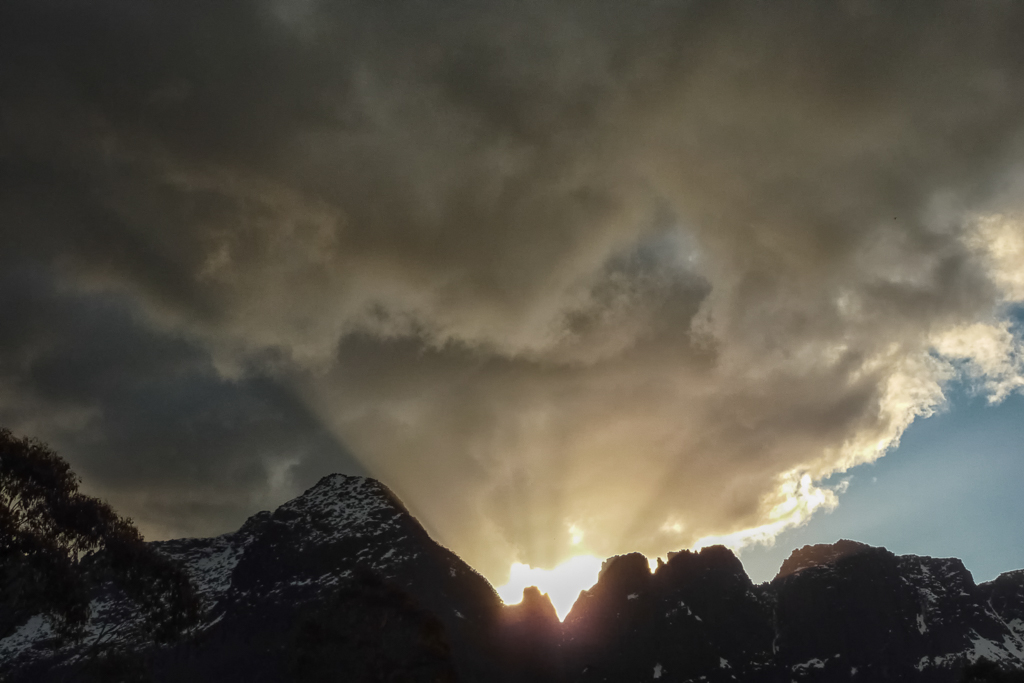 …creating a white beam through the surrounding clouds… 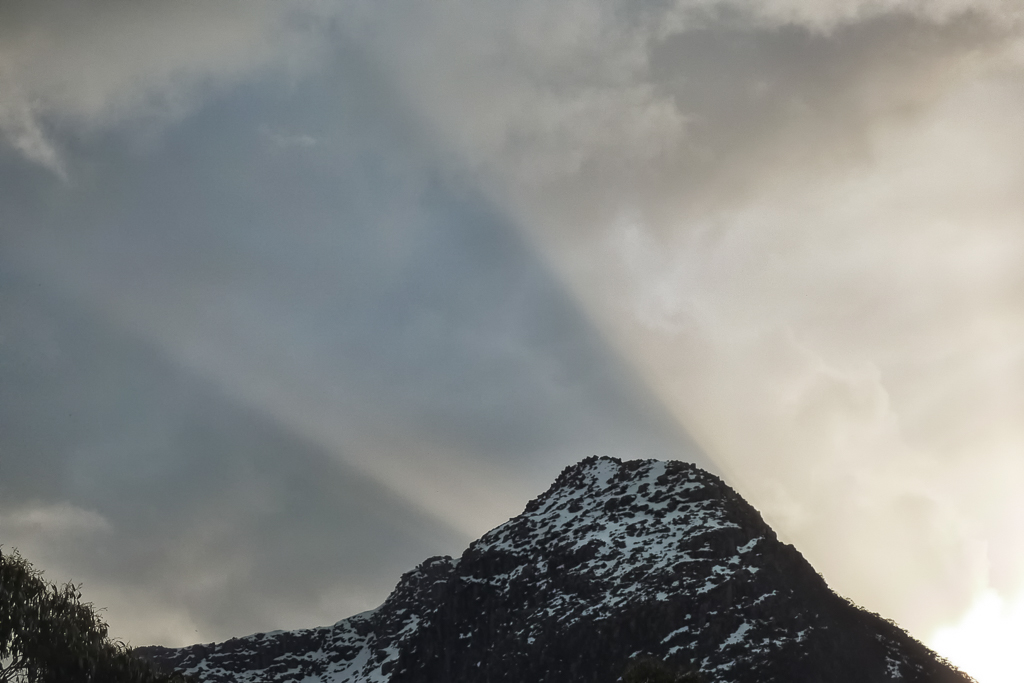 …and then followed by some glowing red. 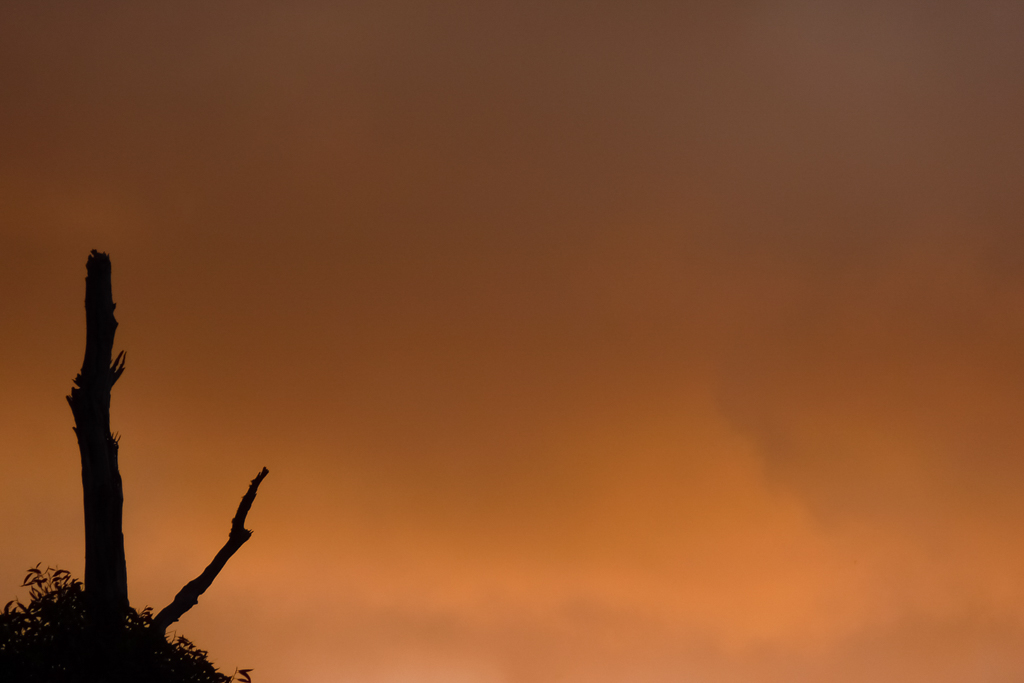 I think I lay there until I was close to freezing to death. So, another day was done and now only two to go and the trip’s over. Next up will be Lake St Clair and Echo Point Hut, which just happened to be my favourite hut of the hike.

Retiring to bed I realised one thing in the brand new, cavernous hut. It’s not animal proof. I spied a possum who’d chewed his way in through flyscreen wire and was strolling around. I guess no building is animal proof and certainly not this possum who was about as big as a bear. It took a bit of hollering for him to retreat outside and judging by the state of the window, he’s a regular. 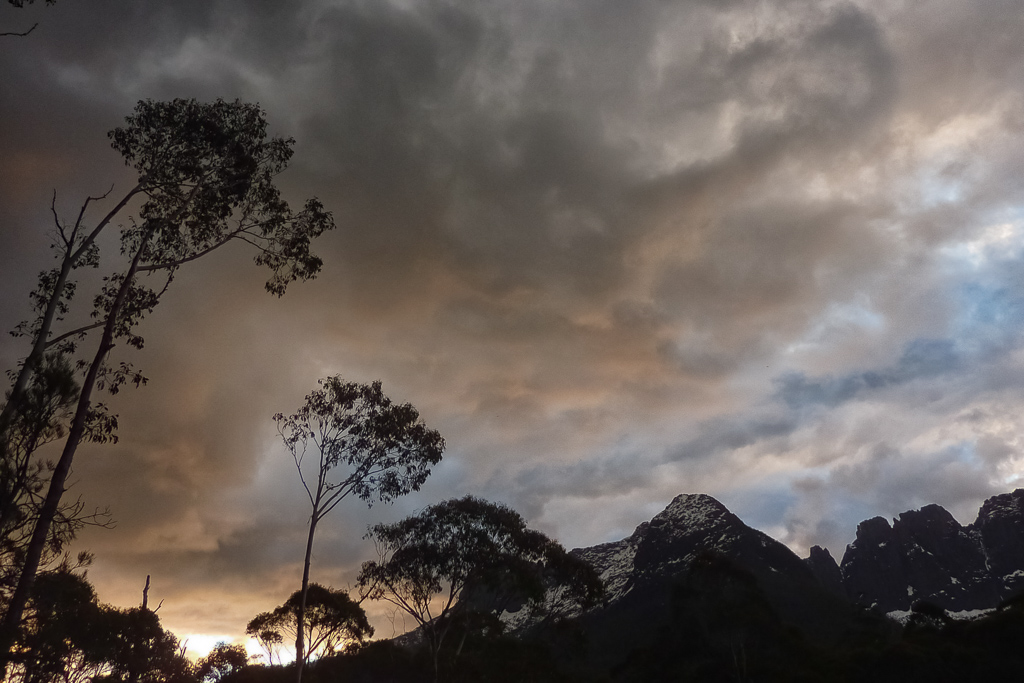