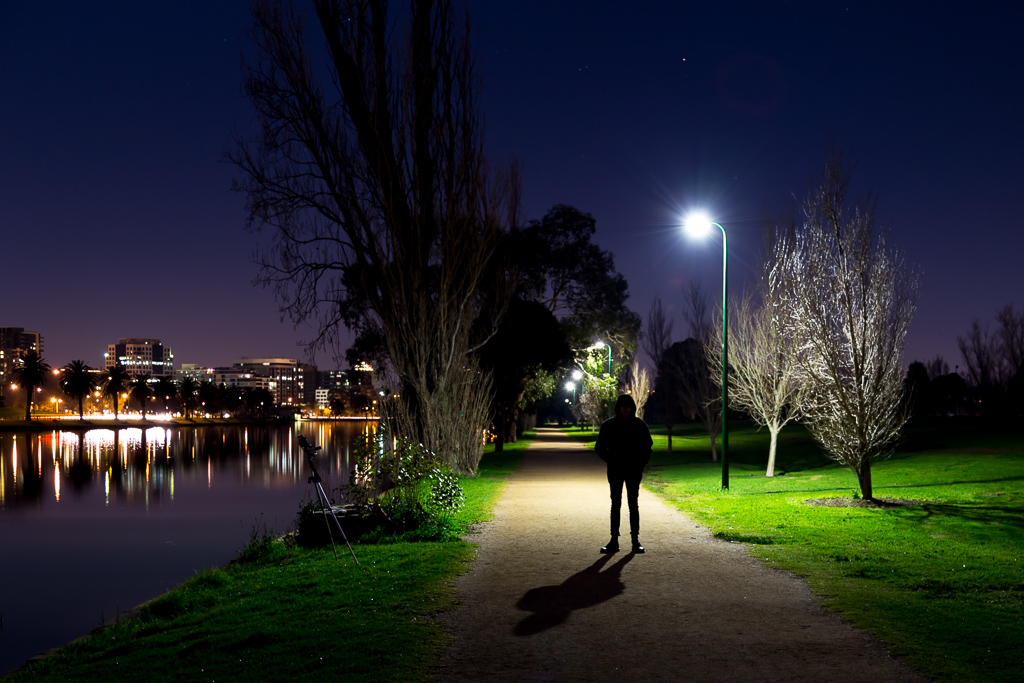 You know what? I was going to continue on from my last post about the Overland Track, but I had a slight problem. My computer blew up. I kid you not, but there was a shuddering crump of an explosion, followed by a mushroom cloud in my lounge room, which forced me staggering outside in my ‘Y’ fronts with blackened face and vertical hair from the blast.

Sorry about the last paragraph, as I just made it up. Yes, my computer did conk out, but it wasn’t quite so dramatic. Instead of ‘KABOOM’, it sort of went, ‘zzzzz’ and the screen went black. As a blogger/photographer/tool this was quite a problem. Without a computer, I’m like a baseball player without saliva, a pilot without his aviators, a soldier without alcohol and a male accountant without womens underwear.

I called in Ben to look at the computer and thankfully he’s got it going again, which is lucky, as I was eyeing off another one for a few thousand. Anyway, as a result of this shemozzle, I haven’t had time to get stuck into a post, so I’ll go for a quick fix instead. I’ve been creeping around, exploring night photography lately, so here’s a chance to do a nocturnal round-up. 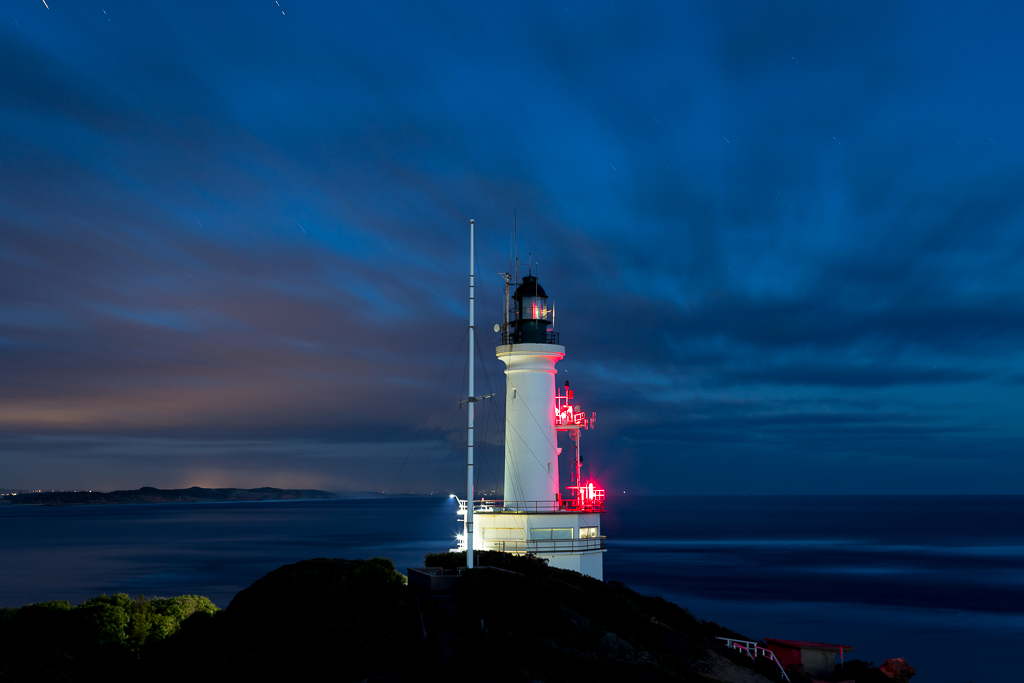 Yes, on a freezing winter’s night, Ben and I headed back down to the Point Lonsdale Lighthouse for another photographic session. Compared to my last trip, this one was moonless, so I was hoping to get some nice star shots around the beacon.

Upon arrival, as I did last time, we set-up on the old World War Two bunker and waited for the light to fade. It was bitterly cold, so I kept moving by switching between the lighthouse and sunset. 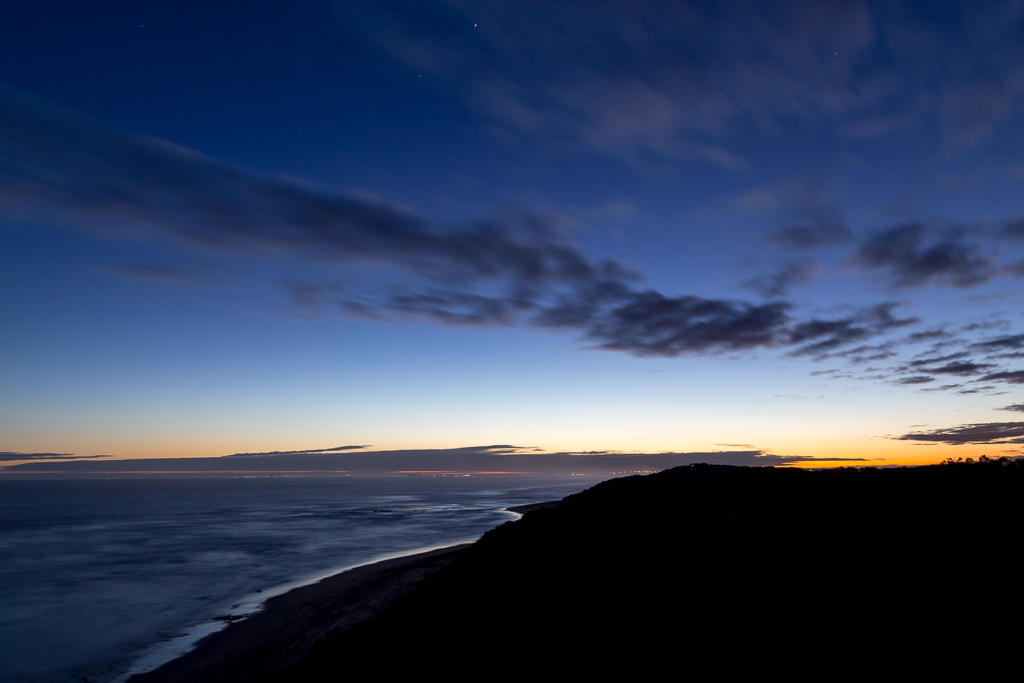 As the evening glow vanished, we concentrated on the lighthouse. You know what though? Taking photos across the water, I didn’t expect having to deal with traffic, but we must have been there during rush-hour. A number of ships passed through Port Phillip Heads, looking like this… 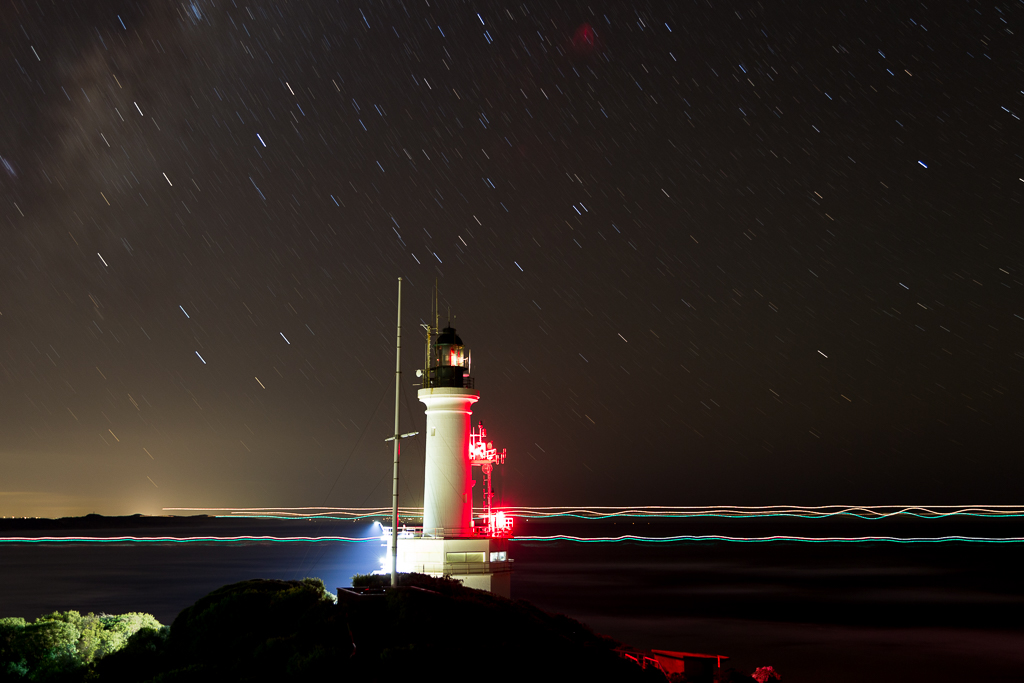 Night time is also the freak time. A walking track runs alongside the bunker, but with no lights nearby it’s pitch black. Our casual photography was interrupted when we heard someone strolling along the path, before stopping next to us. I couldn’t see anything and after a pause, the following conversation occurred. A male voice from the darkness barked,

I’m not sure about you, but if I saw two blokes with cameras on tripods pointed at a lighthouse, I’d be able to surmise what they were doing. So, feeling a little bewildered our obvious antics were a little confusing, the best I could come up with was, “Huh?” Don’t criticise my feeble response though, as initially I was considering an historical reply, such as,

“We’re keeping an eye out for U-Boats.”

Anyway, there was a short pause before the darkness spoke again, in word for word repetition,

He wasn’t going away and with my creativity being cramped, I went for a full disclosure,

“We’re taking photos of the lighthouse.”

Now I was feeling pity, as obviously this bloke had very little material to work with and apparently he’d spent it all. I really couldn’t have done much more, so I adopted a different technique. I ignored him and went about my business, as if the night-time lurker didn’t exist. I guess he was just another lunatic out and about in the dark? After a long pause, a crunching of gravel on the path indicated he was on the move again, as he shuffled off into the inky blackness. I’ve no idea who he was or what he looked like and come to think of it, I don’t want to know.

Back to the photo taking. The ships kept coming… 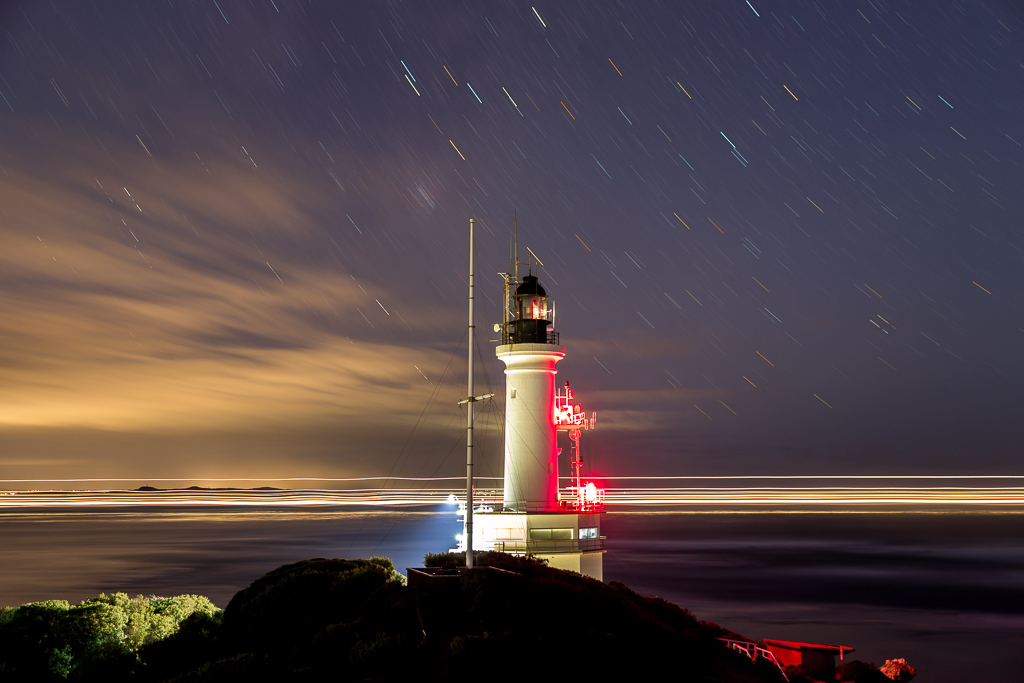 …before finally the traffic died down. I cranked up the ISO to warp-factor and shot a 25 second exposure to eliminate the star trails. The result was almost what I was after… 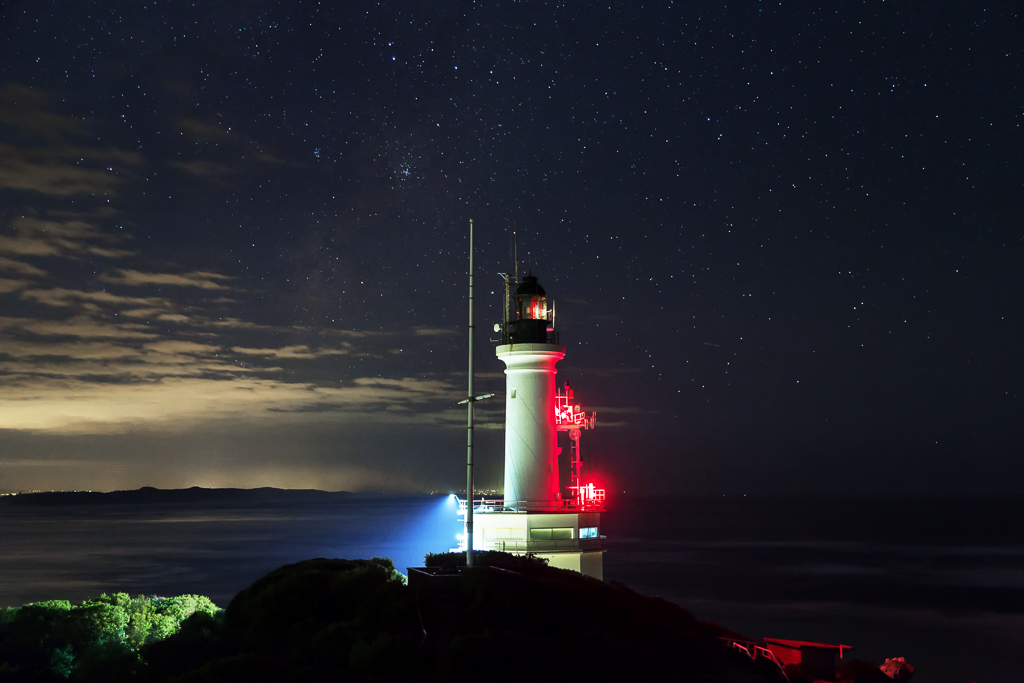 …and that was that. Well, there was more to take in, but my camera battery went flat, and I didn’t have a spare. This is a photography sin, so I punished myself mightily by whipping my back with some rusty barbed wire lying nearby.

A lot of learning has gone on during these night shoots and as a result I’m now fully equipped. Long exposures send batteries into freefall, so now I have a swag of them, In fact here’s my essential winter, night photography kit… 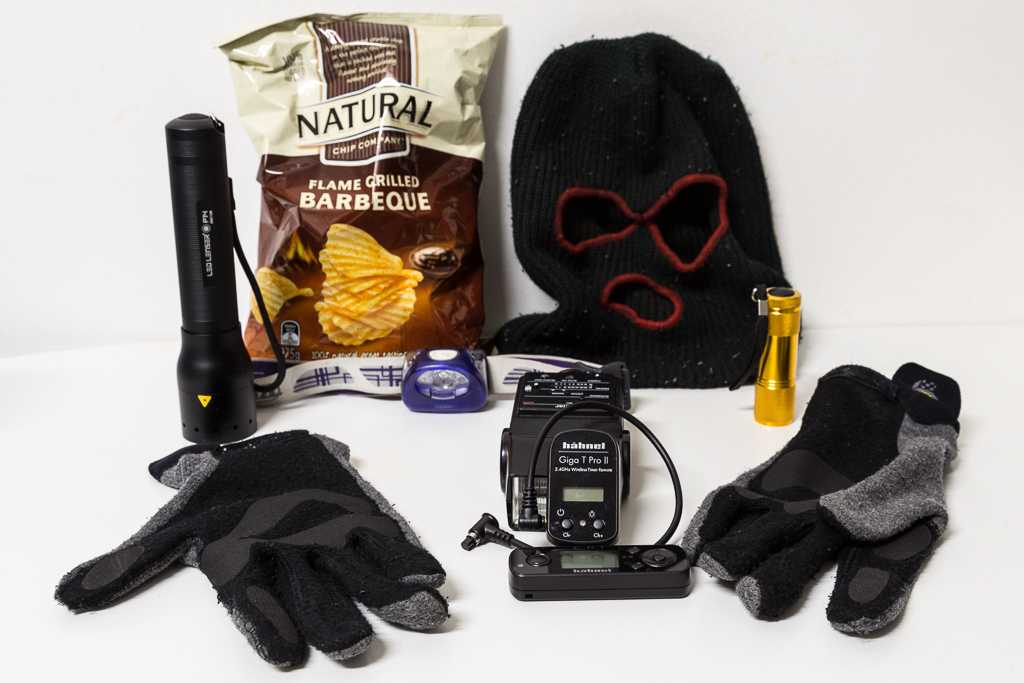 There’s a large torch for shining on objects, so the camera can focus. A small torch for checking the camera settings, along with the headlamp. A remote shutter switch is essential, so I’ve turned to using a Hähnel Giga T Pro Wireless Timer Remote. So far it’s been great. A wireless unit is so much handier than being tethered to the camera. An old handheld flash, which is handy for ‘painting with light’ is recent addition to the kit.

Nutrition-wise, potato chips are de rigueur for the night photographer and their crunching also assists in keeping me awake. Last but not least, there’s the balaclava/beanie. The advantage of this one is it can be utilised with the other items in the night photography kit to do a few stick-ups on the way home.

Now, the lighthouse should be done, but it still isn’t. With the flat battery fiasco, another visit will be required during the next non-moon cycle. Where now?

Well, a last minute decision was made to stop by Albert Park Lake one night. I’ve walked a million laps around that place after work, so I’m fully aware of the mirror-like quality of the lake when there’s no wind. Like this night. A shot of the Melbourne skyline seemed to work okay… 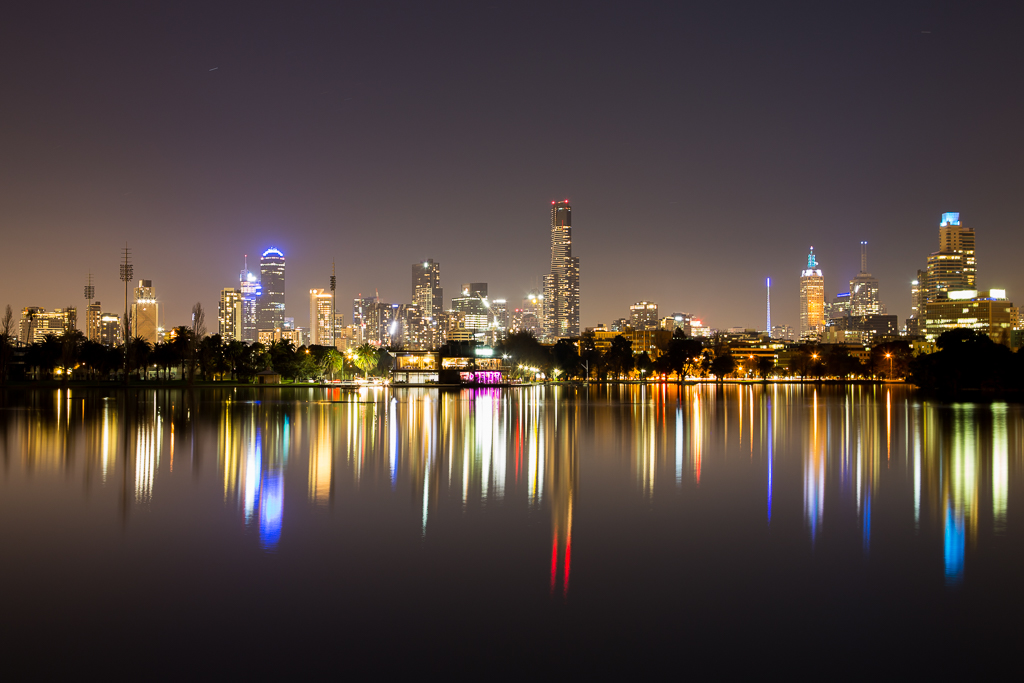 …and there were even ghosts of dead photographers around. Check out this apparition who won’t rest until he’s got his bokeh just right. 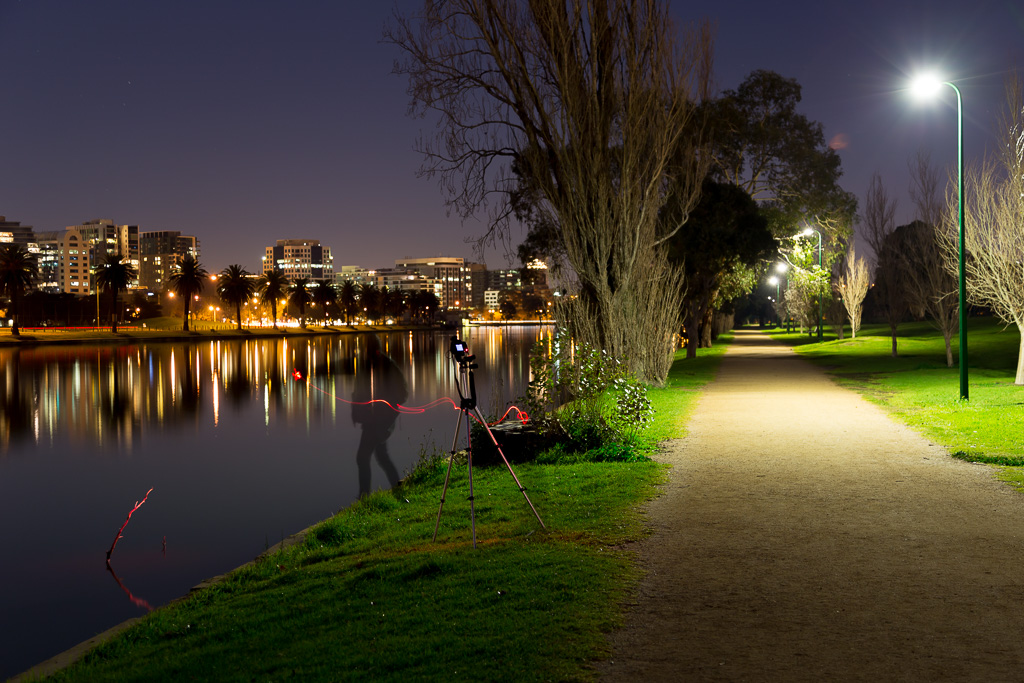 Ghosts are always entertaining, but there was more skyline to shoot, especially when helicopters were flying by. 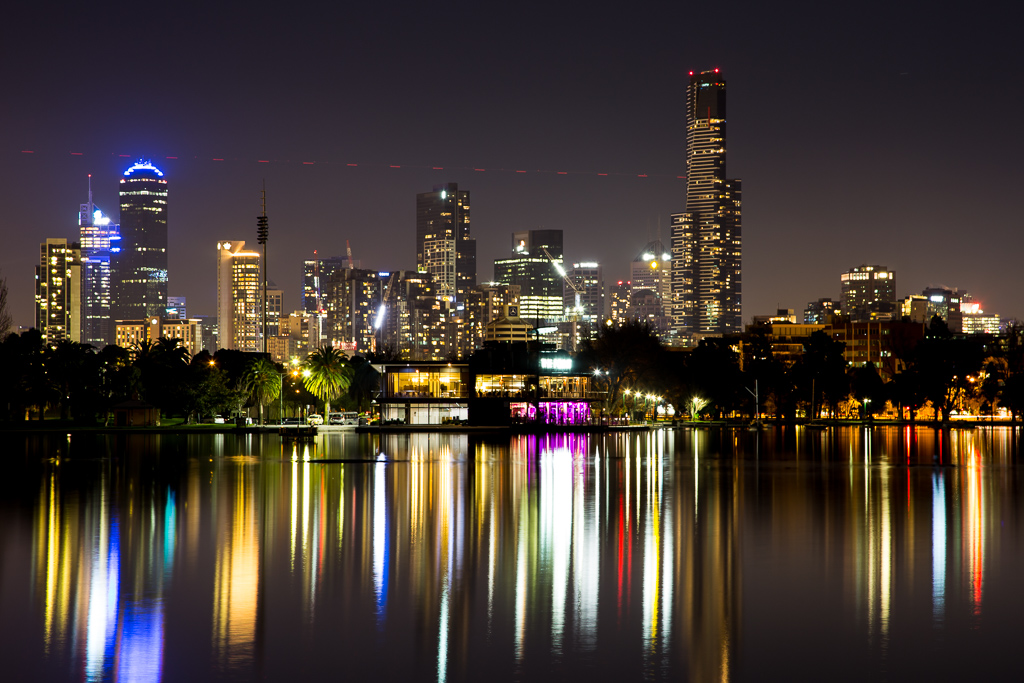 This was only a hit/run mission, so not much time was spent by the lake, plus it was beyond freezing. I was squeaking as I talked due to my testicles retreating so high, I’m sure they were at the back of my throat.

Mm… Next place? Yes, it was back to the windmill again. I do have other places, but it seems the windmill was unconquered, as I couldn’t really get the photos I wanted last time, mainly due to the moon. This makes no sense really when you consider my next trip there was during the night of the ‘super moon’.

Ben and I again headed out with the enormous lamp in the sky guiding us and it was so bright I barely needed to use a torch. There were a few problems though, as parked beside the road under the lunar glare meant passing cars could see us. This is always disappointing, as a few times a vehicle would rocket past and an occupant would scream something out of the window. I don’t think I’ve ever caught what someone yelling out from a car is actually saying? Twice cars went by and I heard something being shouted similar to, “Blarjopinpkhj….blkajfgoahsoidhj….!!!!!!”

I guess blokes who do that think they’re pretty cool? Why else would they do it? Actually, on a broader note. Why are so many men wankers? I’ve no idea how women bother with blokes, as there’s an overload of tools to contend with.

Anyway, ignoring the wankers, it was time to set-up. A certain familiarity with the photos was occurring, but we did have a secret weapon. The torch. Shining a light on the object makes it so much easier in getting a focus. Beats using my car headlights like I did on my first visit here. Here’s Ben working over the windmill… 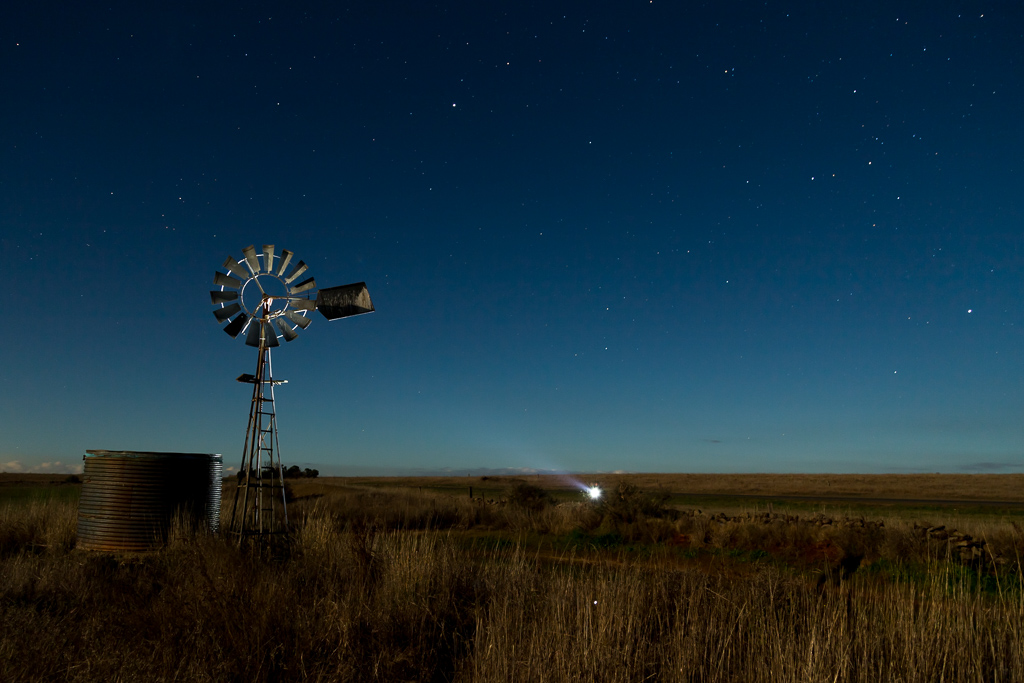 …but again, cars and their light-trails were a little annoying. 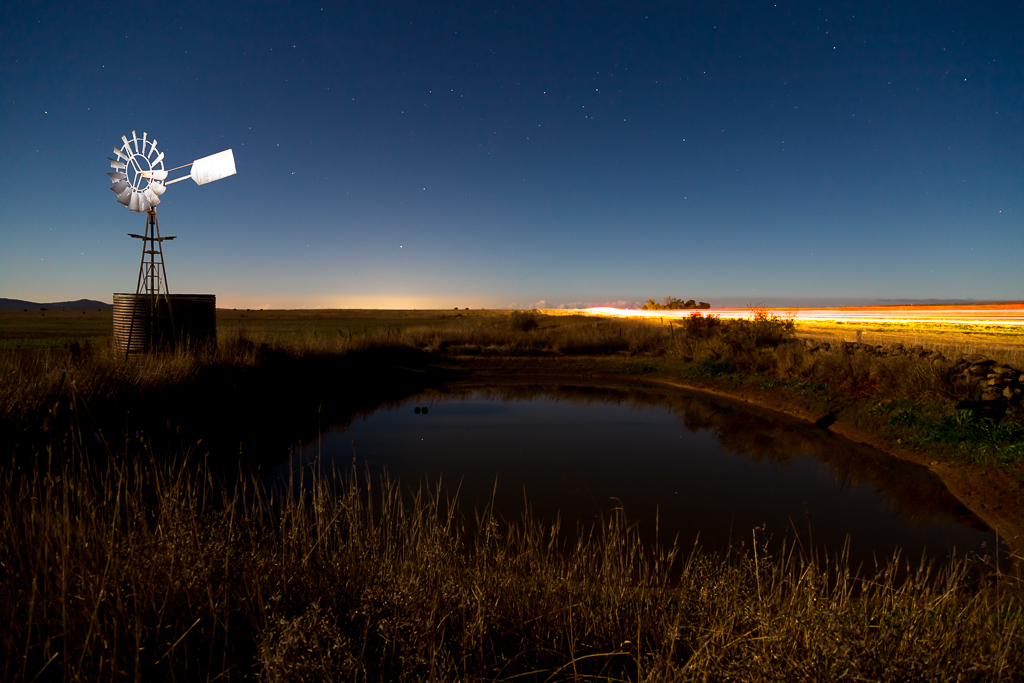 You wouldn’t guess this, but the moon was so bright! Who would have thought on a cloudless night with the ‘super moon’? In the end I did have a trick up my fleece-lined sleeve. Remember the handheld flash in my bank robbery photography kit? It was time to unleash it.

A short shutter speed would normally result in a pitch-black fiasco, but with a bit of ‘light painting’ it can work… 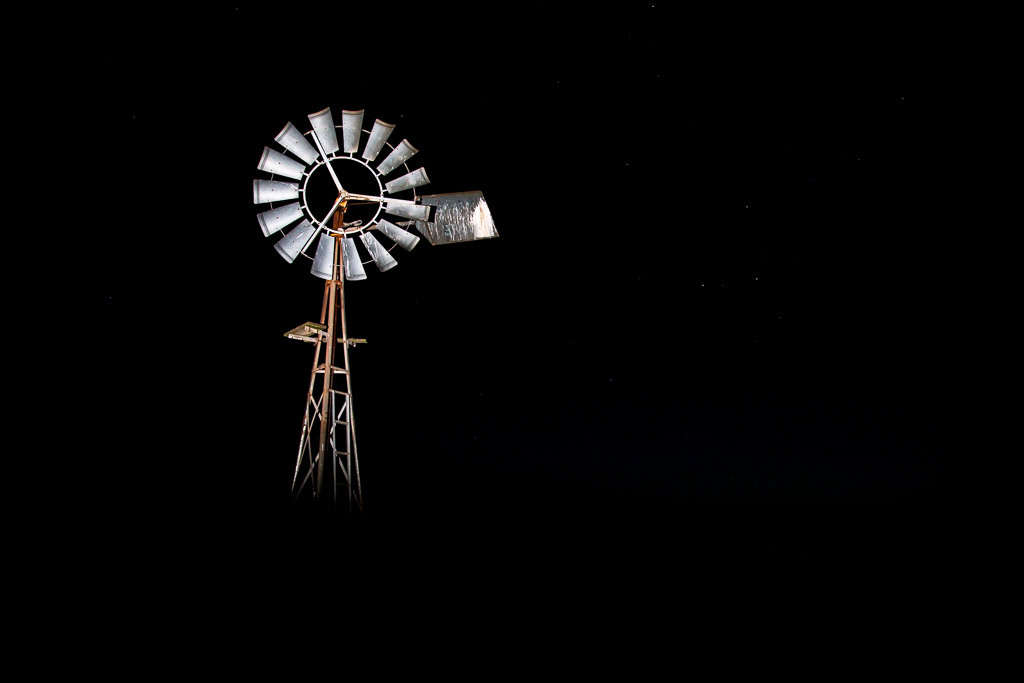 …and that was it. I’ve got plenty more photos, but it’s a matter of finding a place to slot them in somewhere.

This has been an easy post and in the theme of freaks, I might as well leave you with one final one. Okay, it’s not night-time, but I think I had a weird ‘Twilight Zone’ moment, where I saw myself in 20 years time, wearing the ultimate photography outfit. This bloke taking photos and watching ships, whilst surrounded by a rising tide near Point Lonsdale Lighthouse was packing a secret weapon. Gumboots! Why haven’t I thought of that? They’re now on my shopping list… 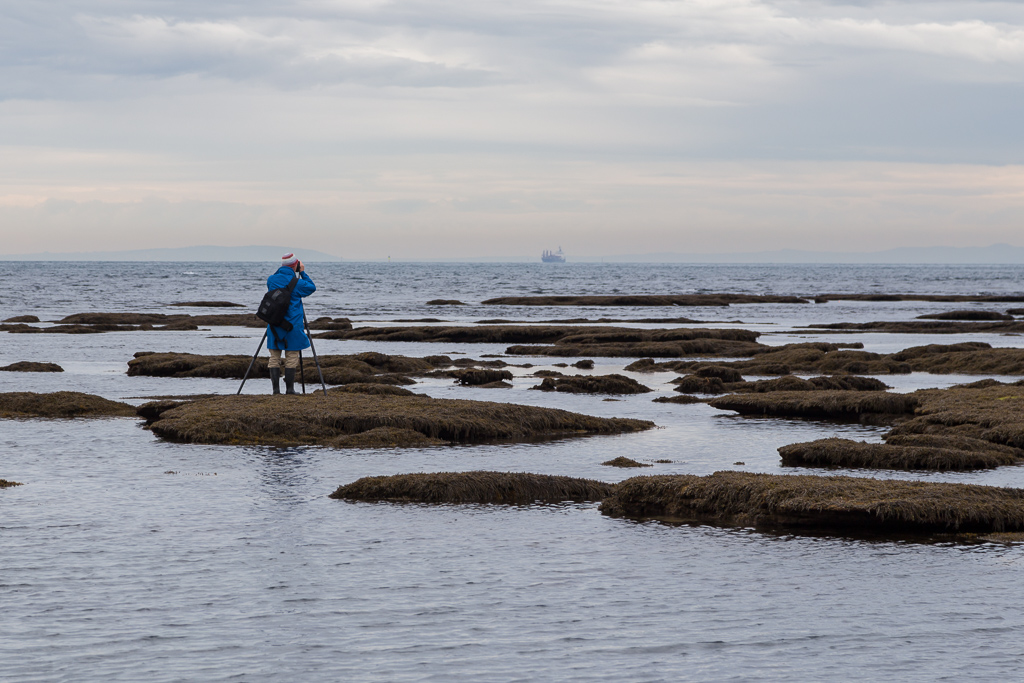