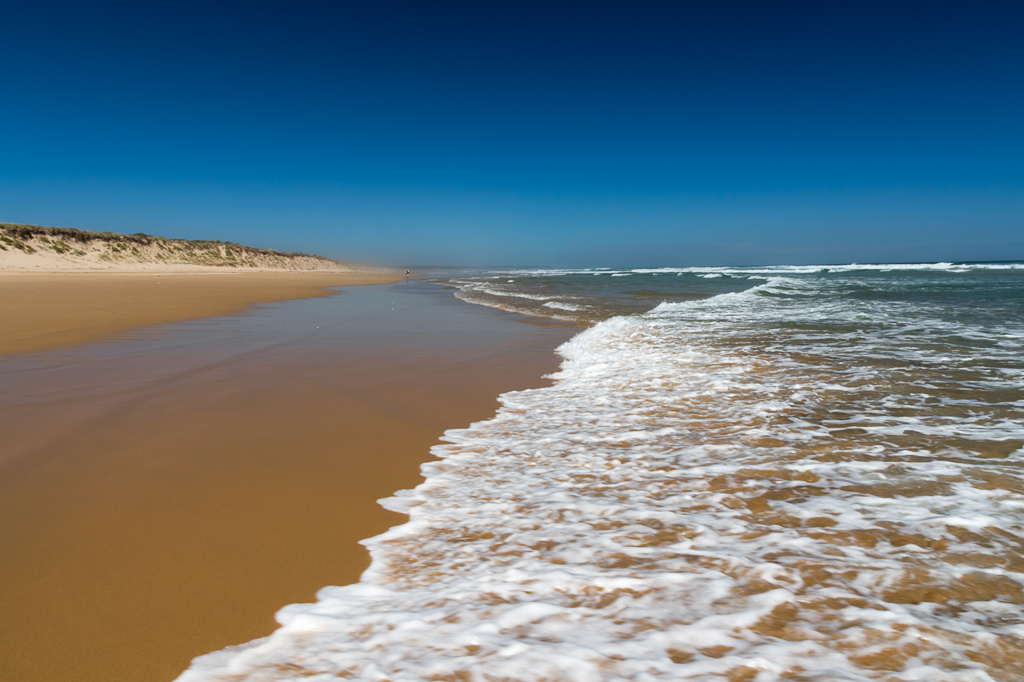 I really should start off by apologising for the pathetic pleading in my last post. Don’t worry, the vote begging for the People’s Choice Award in the Best Australian Blogs Competition of 2013 made me a little queasy as well. I think it even affected my masculinity, as I noticed the other night I was drinking a chai-latte whilst wearing ankle high ugg boots and listening to the greatest hits of ‘Foreigner’.

So, in disgust I slapped myself across the face a couple of times with a stale foccacia and set out to re-mojo, by putting the man back in mannequin. Firstly I turned the mattress over on my bed which gave my lats a work out, took both bins out on the one trip rather than two and today wore a t-shirt I’d accidentally put on backwards in the morning, but didn’t correct all day. That’s more than enough masculinity for anyone to handle.

Oh yeah, hiking. How’s this for a trip? The Cape Liptrap Coastal Walk to Venus Bay in Eastern Victoria has been on my radar for a few hundred years. The main reason I haven’t been able to knock it off, is it’s one of those cursed one way trips requiring a car shuffle. Finally though, a tilt was arranged with the long suffering hiking sidekick, ‘the Smuffin’, whilst utilising ‘Lady Smuffin’ as support, plus the Smuffin HQ caravan was being deployed as base camp in Inverloch. Take a note of the last sentence, as it’s now officially being ratified as a record for the most amount of Smuffins in the one line.

I know you want me to get to the actual hike, but I need a paragraph to explain a few things, so hold your horses. Remember, don’t fool with a bloke wearing his t-shirt back to front. If you thought the waffling was over, then you’re wrong, but at least I’ll break it up with a picture. Here’s Smuffin and I, planning the finer details of the hike with beards primed inside his caravan. It’s pretty luxurious isn’t it? Oh yeah, Lady Smuffin is providing snacks. 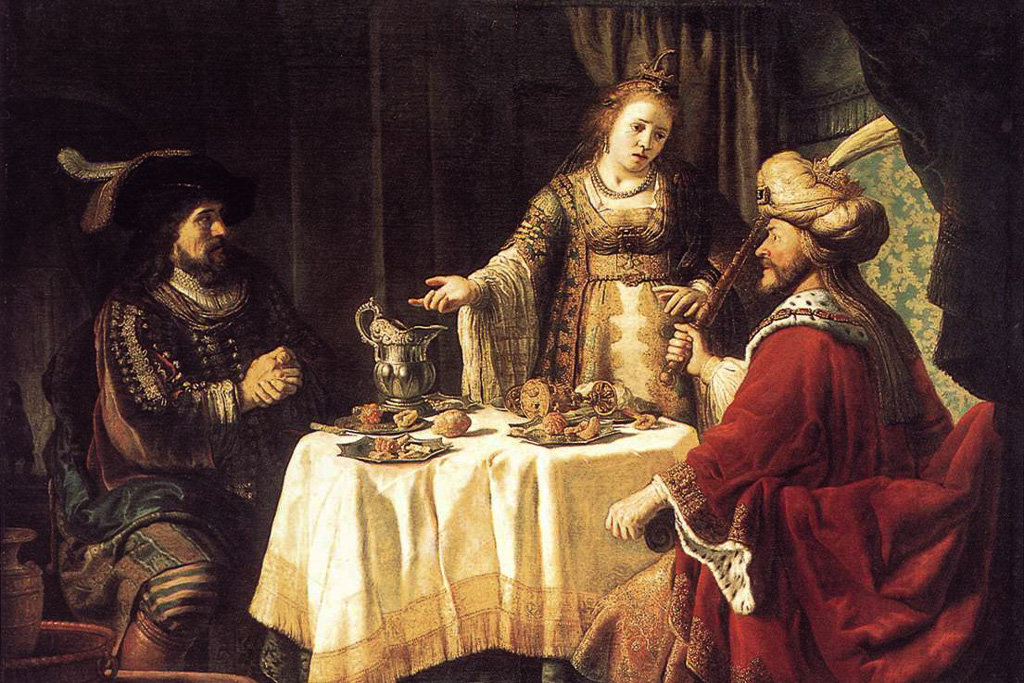 The trouble with this walk is it’s tide dependant, with a section at the start between Cape Liptrap Lighthouse to Morgan Beach on rocks. No problem right? Except the only days we could go, the low tide was at 4 am and 5 pm. Mm… Okay. How about this? We flipped the whole thing on its head and decided to do the hike in reverse, starting at Venus Bay and hitting the tide dependant section late on the second day. Pretty clever huh?

That’s not all though. On this two day walk, there’s a water problem. The only water source was a creek that wouldn’t be reached until the second day and it passed through farmland, so I was a little concerned I’d be drinking water, full of pesticides, manure, animal corpses and Jimmy Hoffa.

On every walk I forget something and on this one it was the water purification tablets. The Inverloch chemist didn’t have any in stock, but assured they, “can order them in”. Mm… Bummer. So, rather than risk giardia, we elected to tote two days worth of water and hoped seven litres each would be enough. Actually, as a side-note, whenever I read the word ‘giardia’, my brain says ‘Godzilla’ instead. There’s no apparent reason for this, but I’ve always referred to any water-related illness as, ‘I’ve got the Godzilla’s’.

Next up is the fashion stakes. I was going to wear a pair of Teva sandals for the entire hike. The first day on the beach would be standard sand strolling and the second involved rock hopping, On the rocks, I’d break out the long white socks with the sandals. There’s no doubt I’m putting the bad, back into arse. Why did I want to wear sandals? Well, I should answer that with my own question. Why wouldn’t you want to wear sandals with socks?

So, on a sunny day we were dropped off at Venus Bay. A day of beach walking and our target camp of Five Mile Track, Cape Liptrap Coastal Walk to come. There were some unknowns though. We were toting new Aarn Featherlite Freedom backpacks and the tide was in. I began to wonder. Will the pack be alright? Is the sand going to be soft? How hot is it going to be? Did I bring enough water? Are the nights going to be cold? Will I find somewhere to sit to eat my sandwiches for lunch? Did I remember to pack the instant chai-latte packets?

The golden beach stretched out in front of us and under a clear blue sky there was a haze leading to the horizon. It felt like a walk into the unknown, but in the end we manned-up, put our fears aside and hit the beach like a couple of rock ‘n’ rollers with one foot in the café.

There will be a few problems from now on though, as all of the beach photos I took for the day look exactly the same. The only advantage to mix them up was courtesy of the sandals, as I could go wading to record some small wave action. 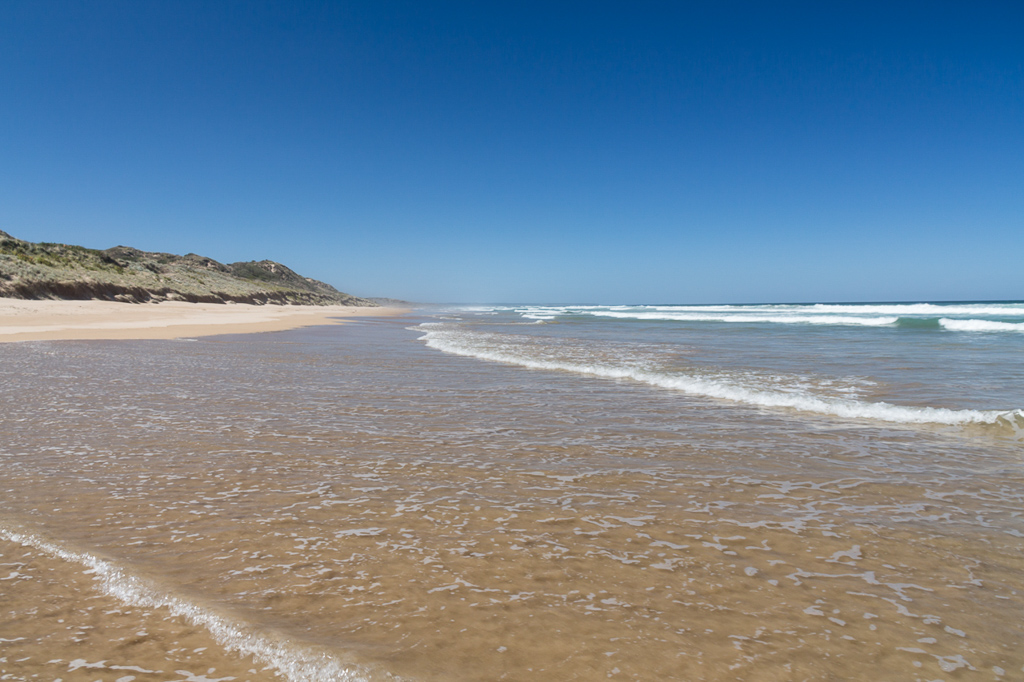 The new pack didn’t feel too bad, but I soon learned they’re the complete opposite of every other I’ve owned. I initially tightened the straps, so it was sitting snug against my body. Don’t forget these packs have the front pockets and they do take some getting used to, as I felt like Mae West at first. The trouble with everything tightened though, is it felt like my shoulders were about to detonate. Smuffin tinkered with his and was of the opinion only the waist band should be tight. The rest? Loose as a moose. I let the front pockets out and suddenly the whole set-up was comfortable. Interesting times ahead.

Back to the beach. This section had some of the most pristine sand I’d ever seen. No driftwood, no washed up fishing gear, no oil slicks. About the only thing I found that caught my eye was this lost fishing float. Which is now on the mantelpiece at home. 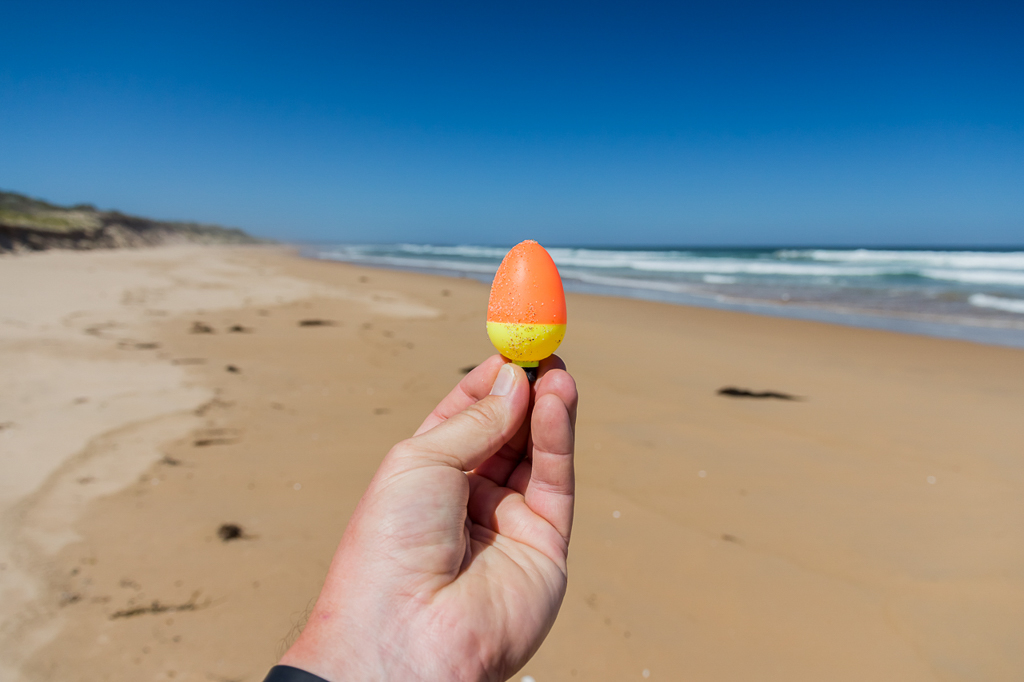 There were quite a few Pacific Gulls flying around and it became my mission to capture one in a half decent shot. 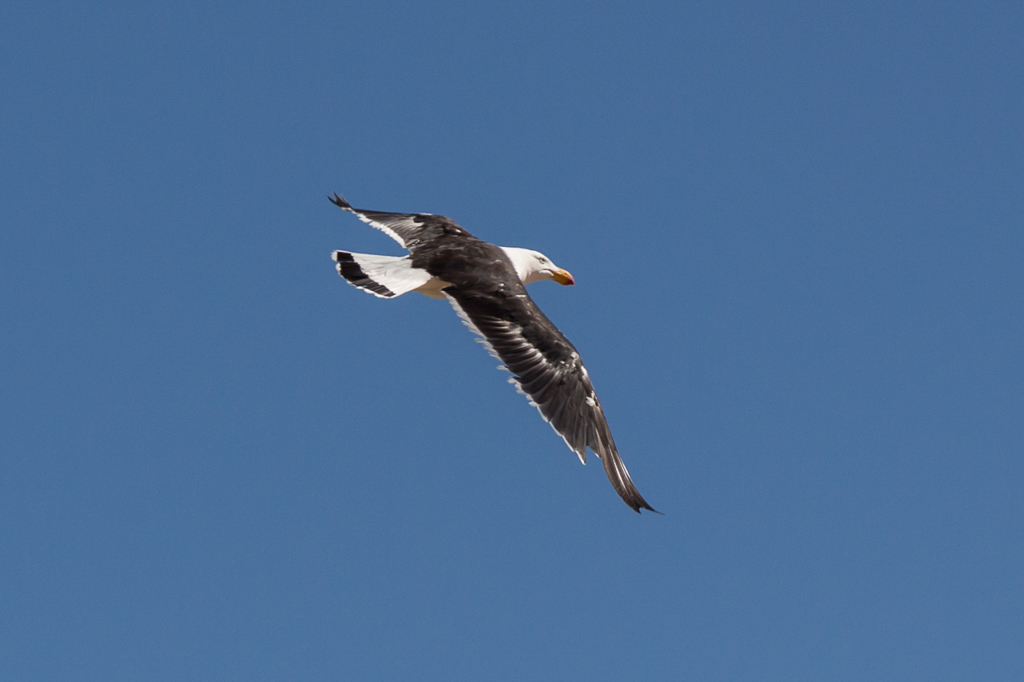 They were tricky though and it took a bit of fast shutter speed work, combined with extreme cropping to get some reasonable ones… 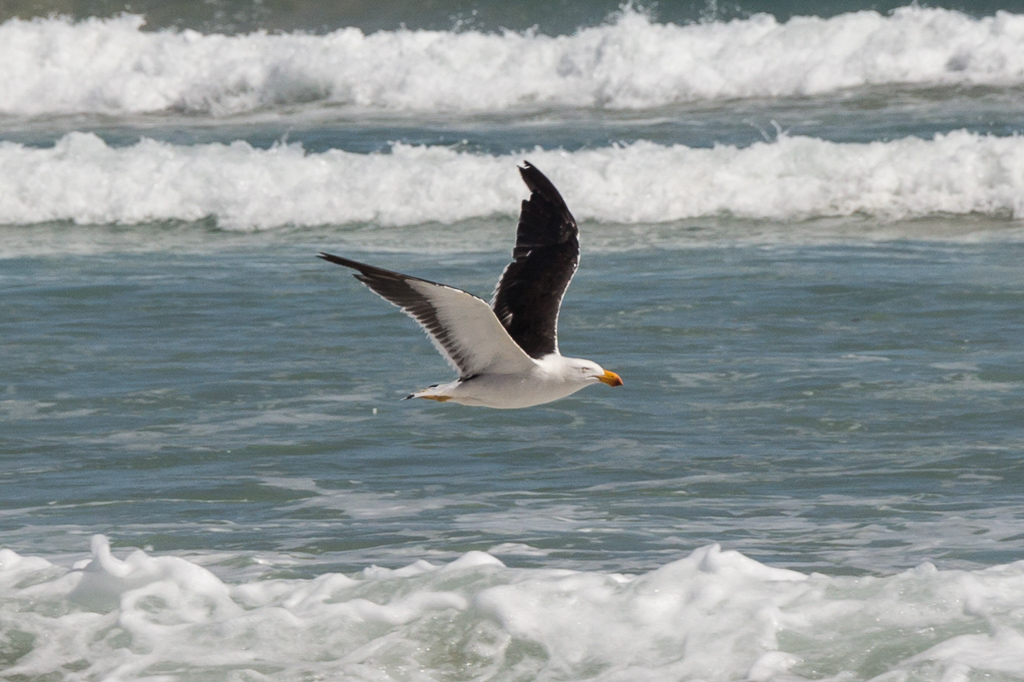 Even without low tide the hiking was remarkably easy on firm sand, but the sun had some bite in it, so I spent more time wading than walking. There were no records being set this day and after only four kilometres lunch was calling. Where to sit though? Surely not on the hot sand? Just as we mentioned lunch, we both looked up the beach and lo-and-behold, there was a perfectly positioned log for comfortable eating. I’m not joking in saying this was the only log we saw on the beach for the day. 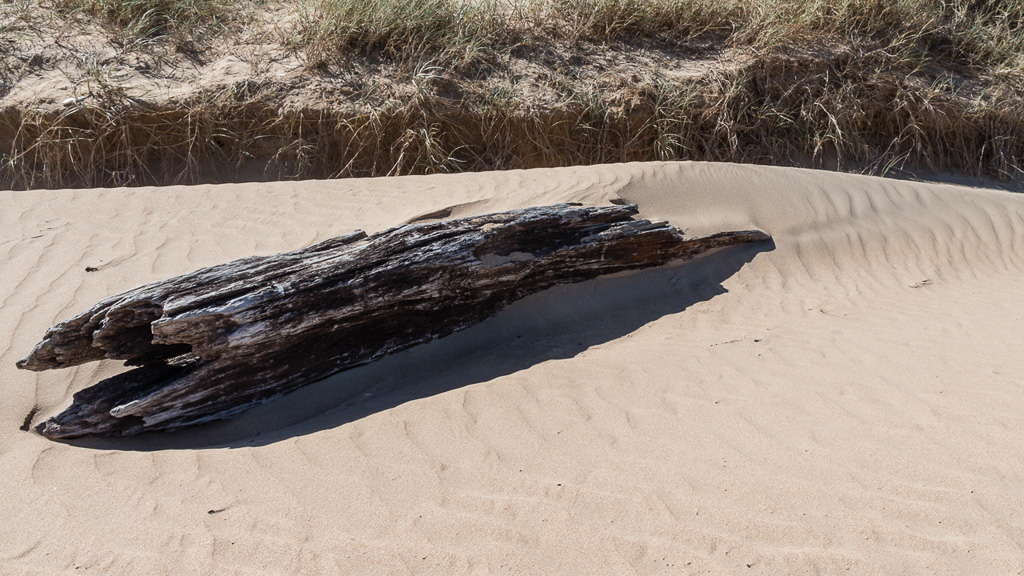 Whilst sitting back stuffing our faces we suddenly realised we had company. Cousin Itt was nearby relaxing in the sun… 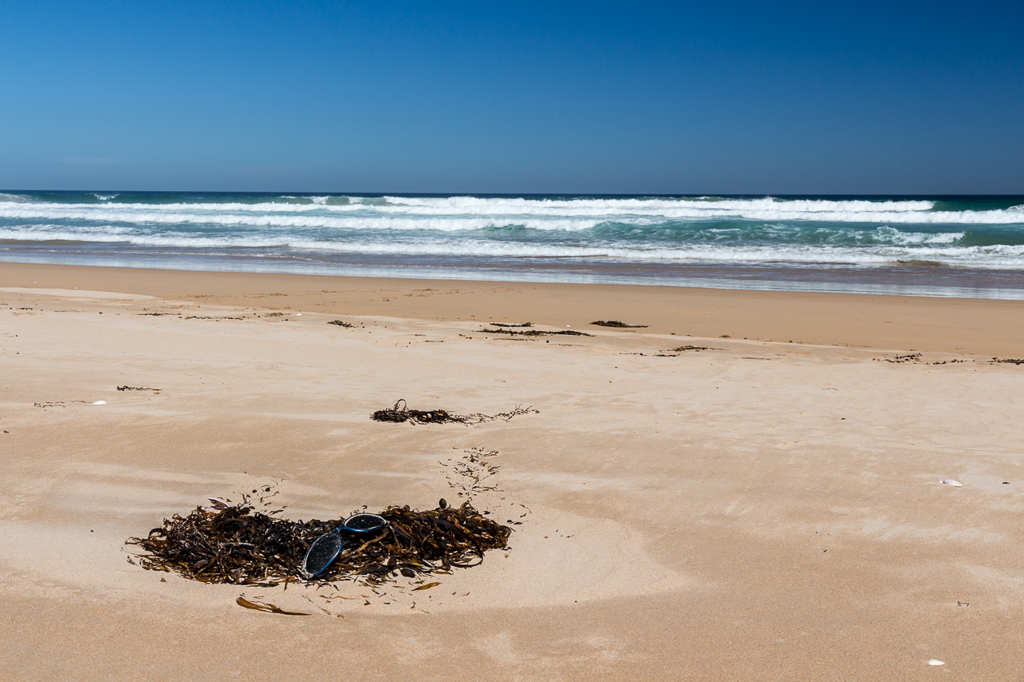 Stomachs partially filled (I’m never full. No matter how many potatoes I eat) we headed off. I took some more photos that looked like all the others… 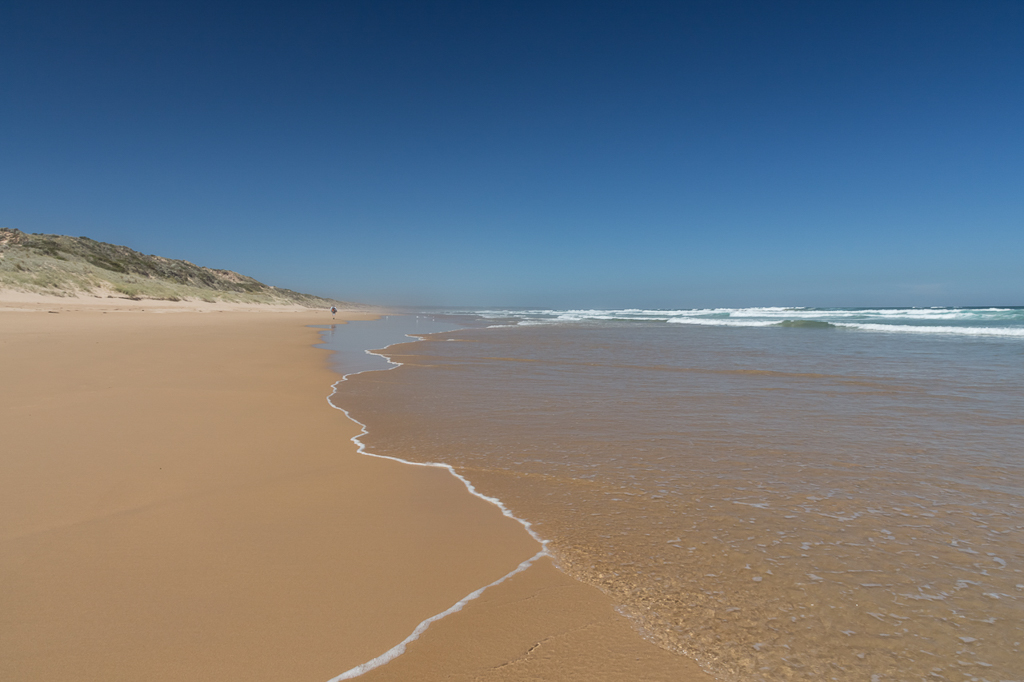 …but did find another float. No, this one isn’t on my mantelpiece. 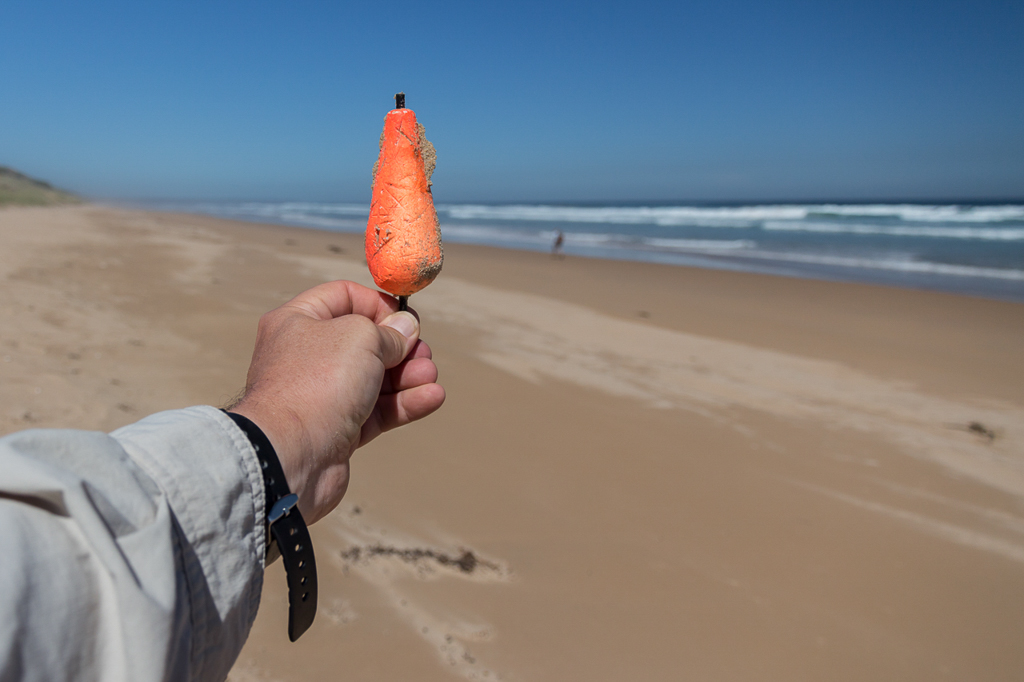 Actually, it’s an action packed photo, as at that point I suddenly realised my watch strap was becoming undone. Crazy stuff, hey?

The Pacific Gulls kept whizzing by… 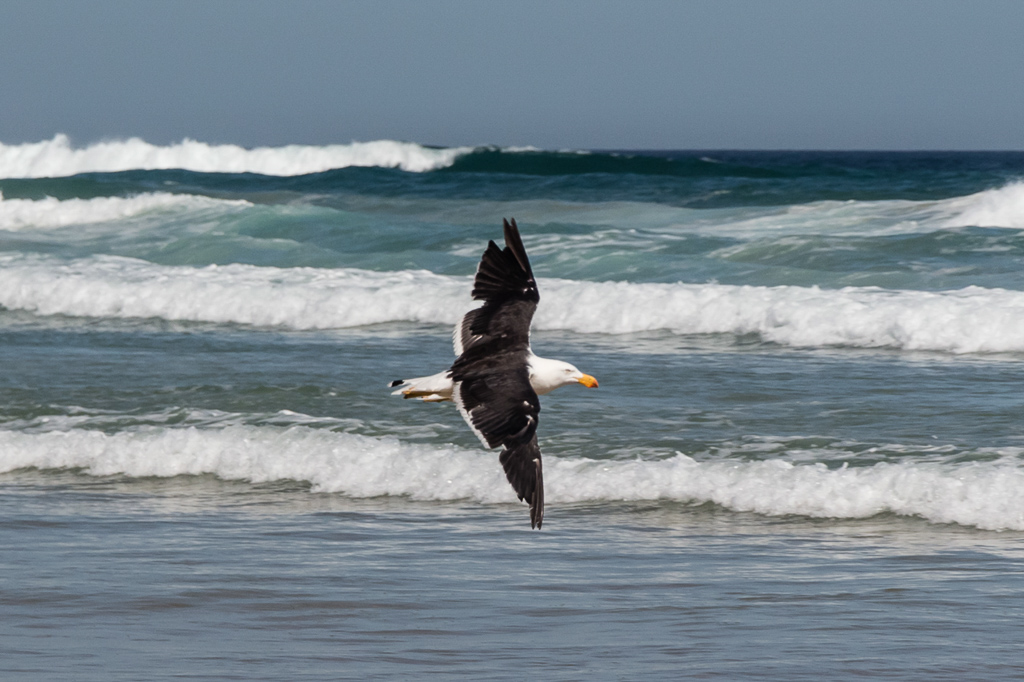 …and after a few more hours we’d found Five Mile Track. There’s no real defined camp here, so we strolled a few hundred metres until finding some flat ground where it looks like other people had set-up before. We hadn’t done an overnighter for some time, so the organisation was lacking a little… 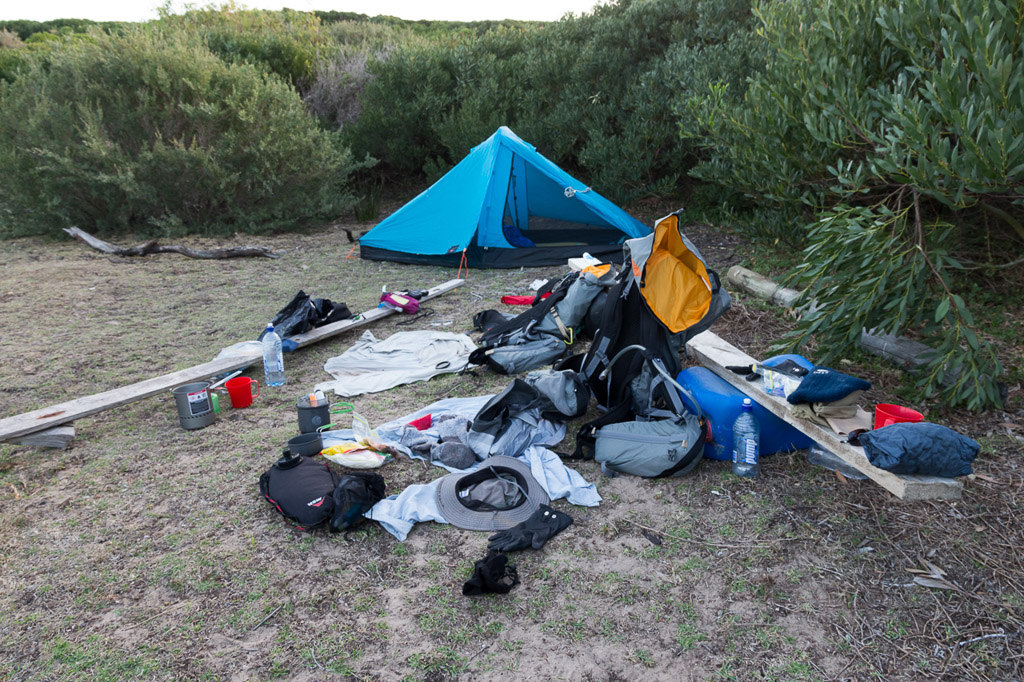 …and Smuffin had a short nap, but ensured he kept an eye on things. 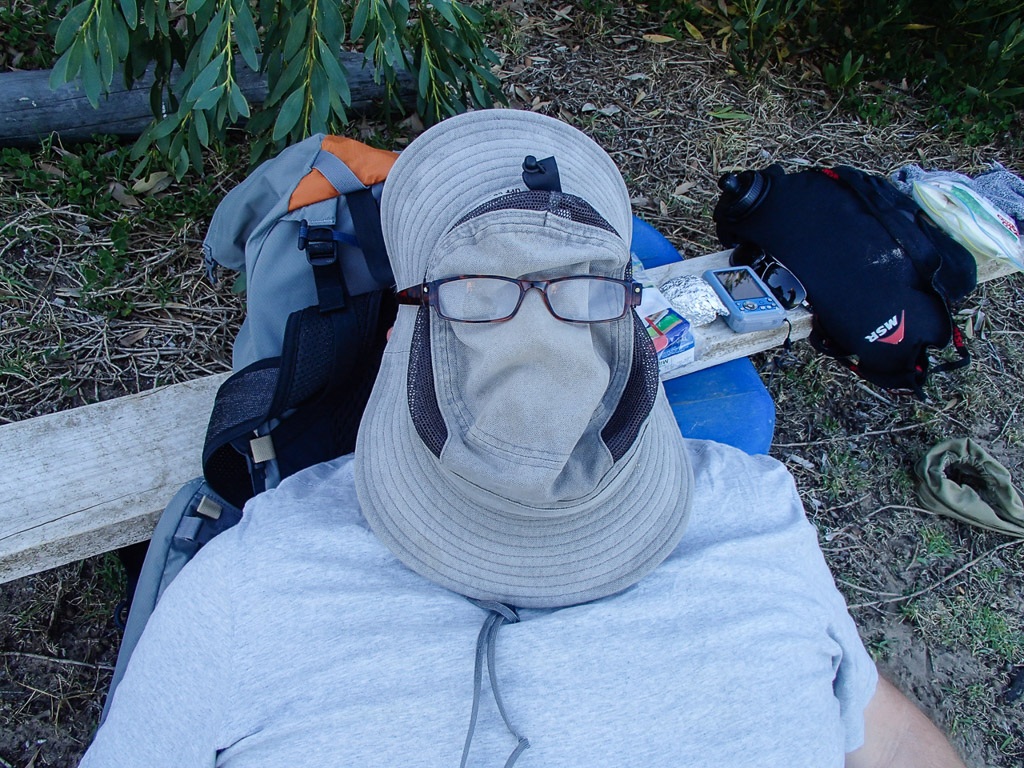 The Man Who Wasn’t There

The camp is sheltered, which was a problem on this hot day, as there was no breeze! It feels isolated, quiet and peaceful though. Other than the motorbikes, it’s great.

Whilst sitting back the infernal sound of two-stroke motorcycles could be heard heading our way along Five Mile Track. Suddenly, two blokes wearing full protective riding gear of singlets raced by leaving us chewing on sand. They headed down to the beach and after leaving tyre marks all over the pristine sand came roaring back past us. Be careful waving to someone riding a motorbike at speed on a sandy path, as they may feel compelled to wave back causing a possible loss of control. On the narrow track there’s a chance they may crash and hurt themselves as a result. As they passed, we both waved vigorously. 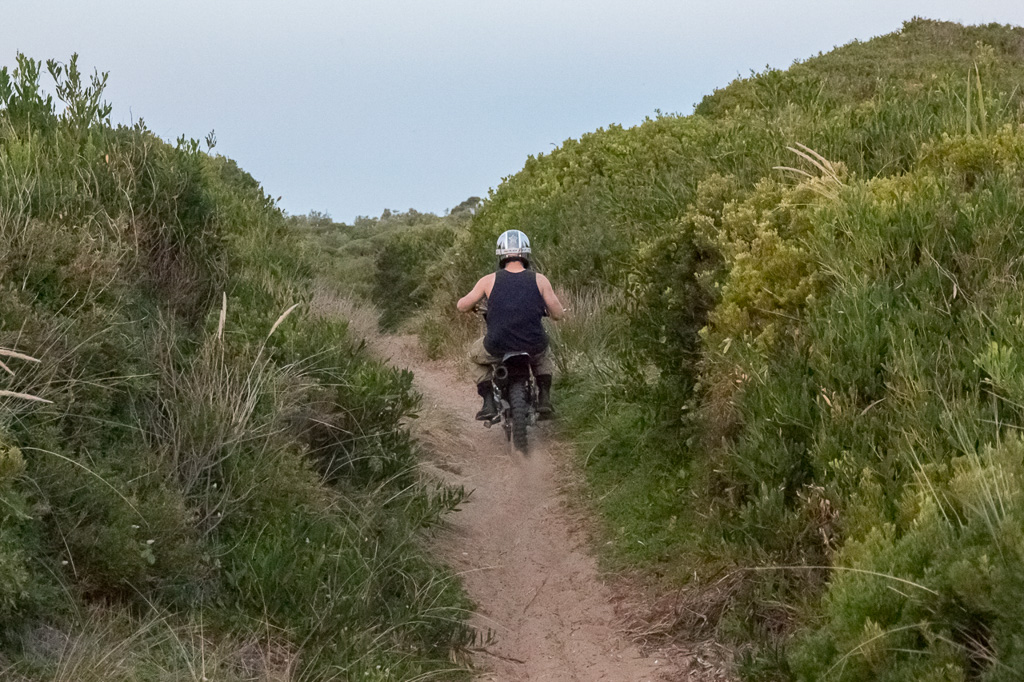 That was a bit of excitement and the only thing left was the sunset. With the sun getting low, we trooped back to the beach for some last light action. There was even a full moon to accompany us. 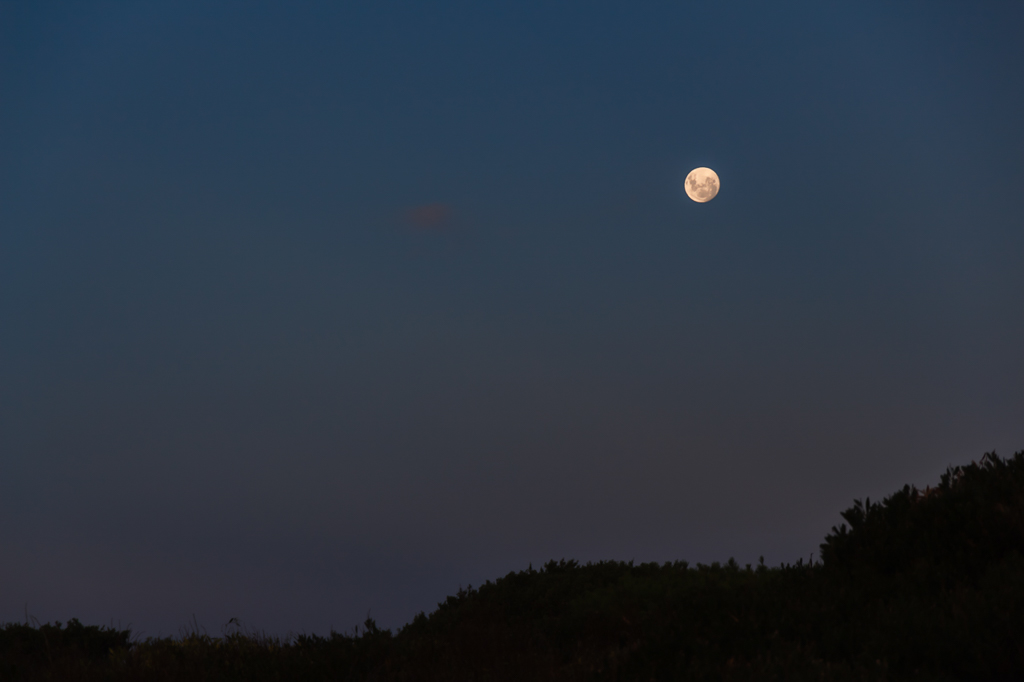 The low tide was a bonus, as the fading light was giving off some nice reflections… 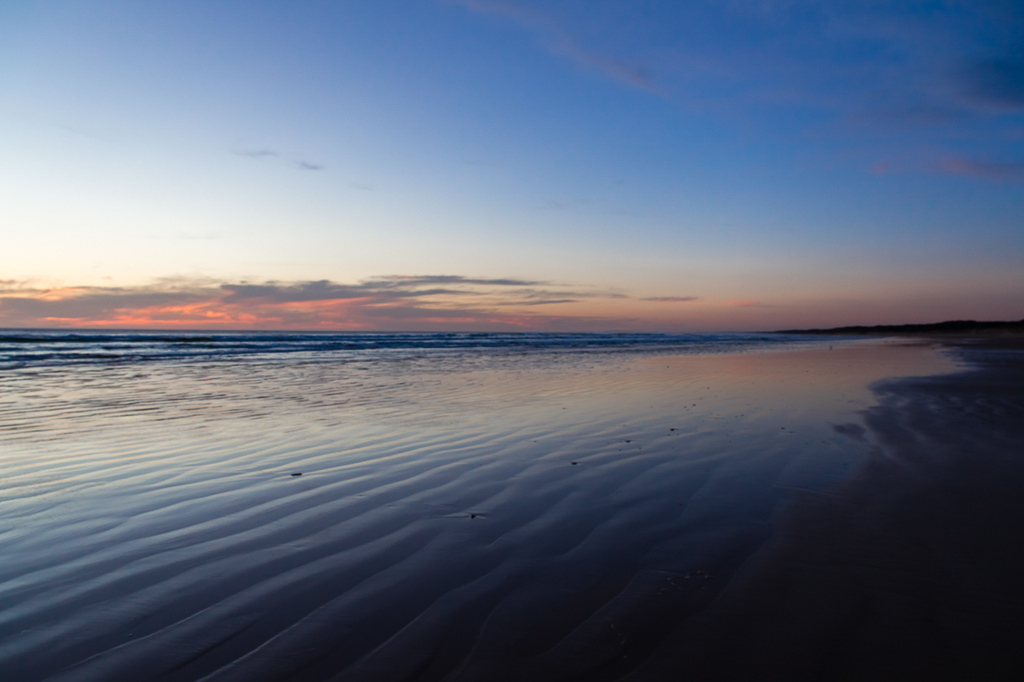 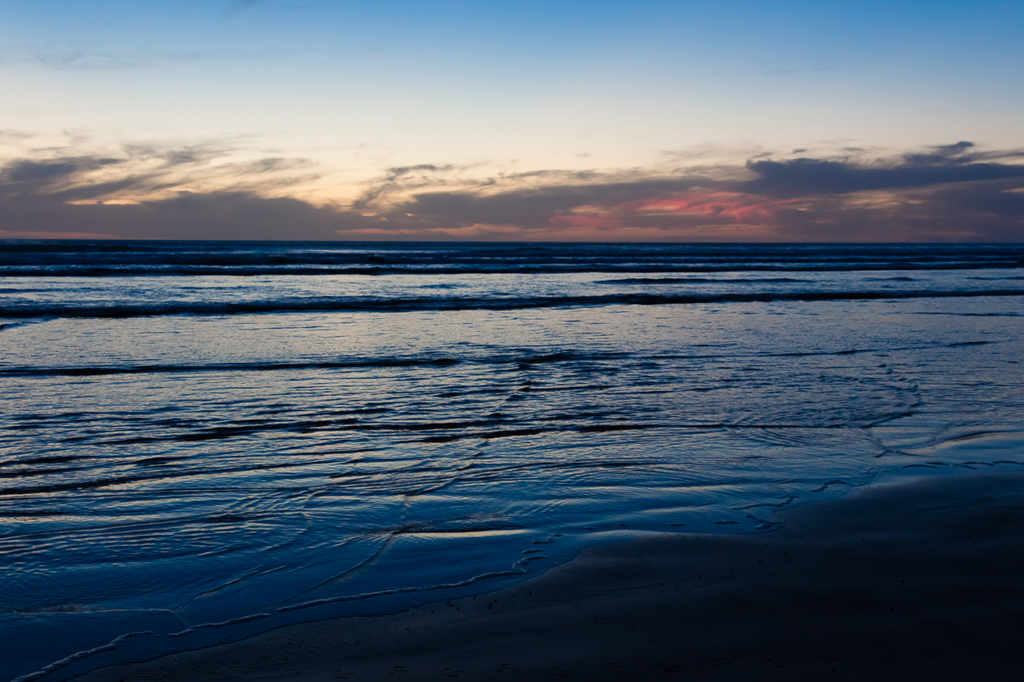 …with a bit more… 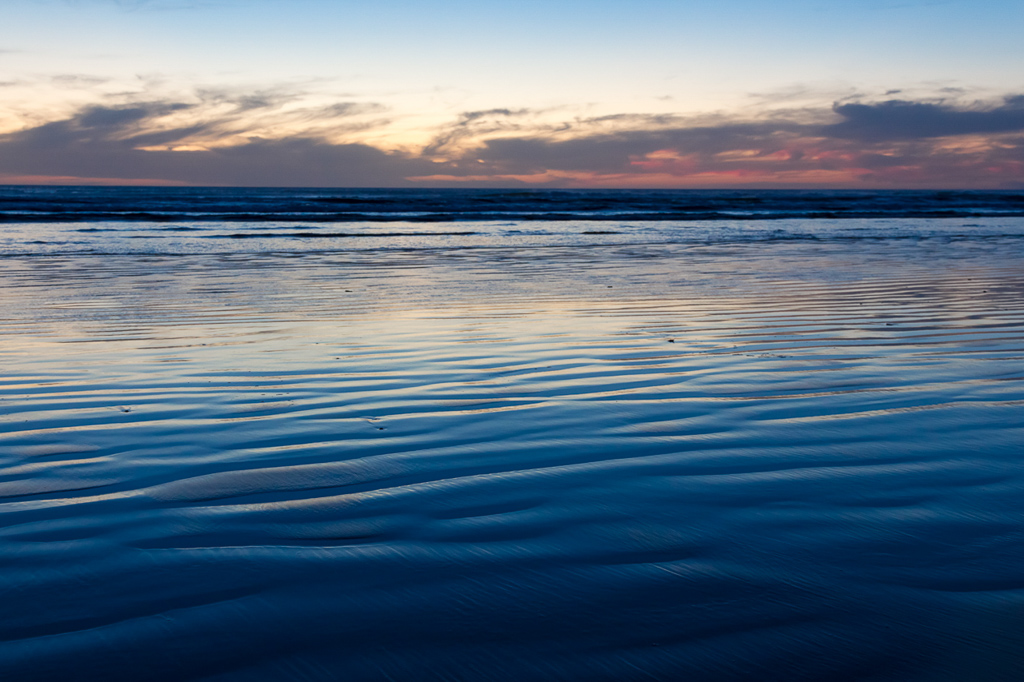 …until I utterly crapped myself when suddenly the Cyclops monster appeared from the deep catching me off guard. 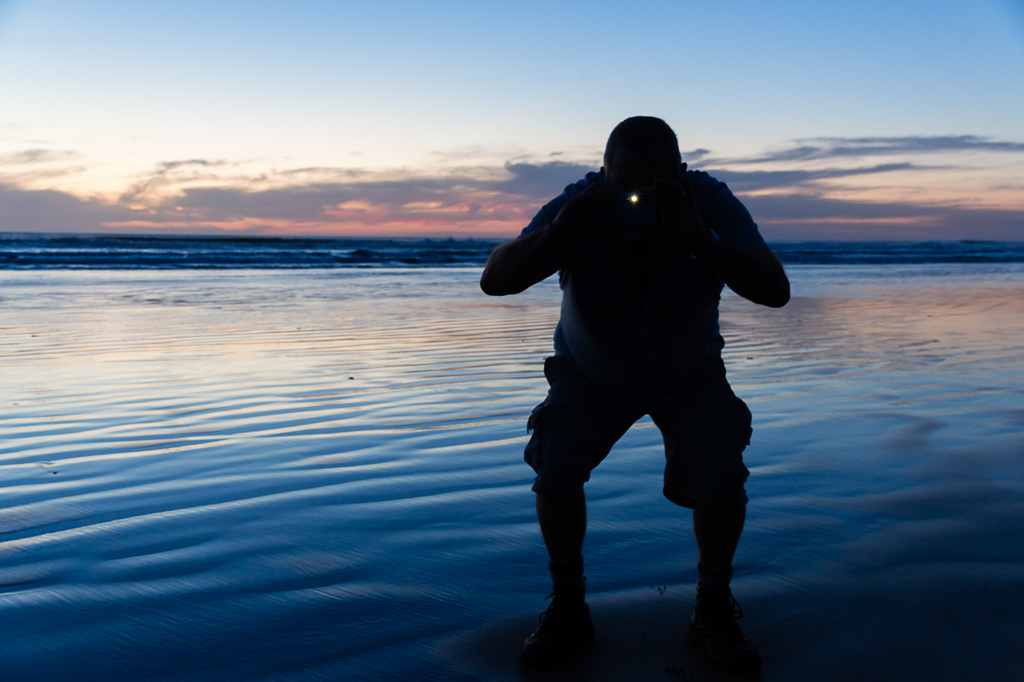 I think you’ll find that’s it for the day. The 11 km stretch of beach walking from Venus Bay to Five Mile Track, Cape Liptrap Coastal Park was a pretty casual day of walking. The next would be harder, but it couldn’t be too hard along the beach, could it? Well, stay tuned for the most mind crumbling, ball breaking, organ churning, blood oozing, sensory overload of painful hiking I can remember. Since the last time all of those things happened. 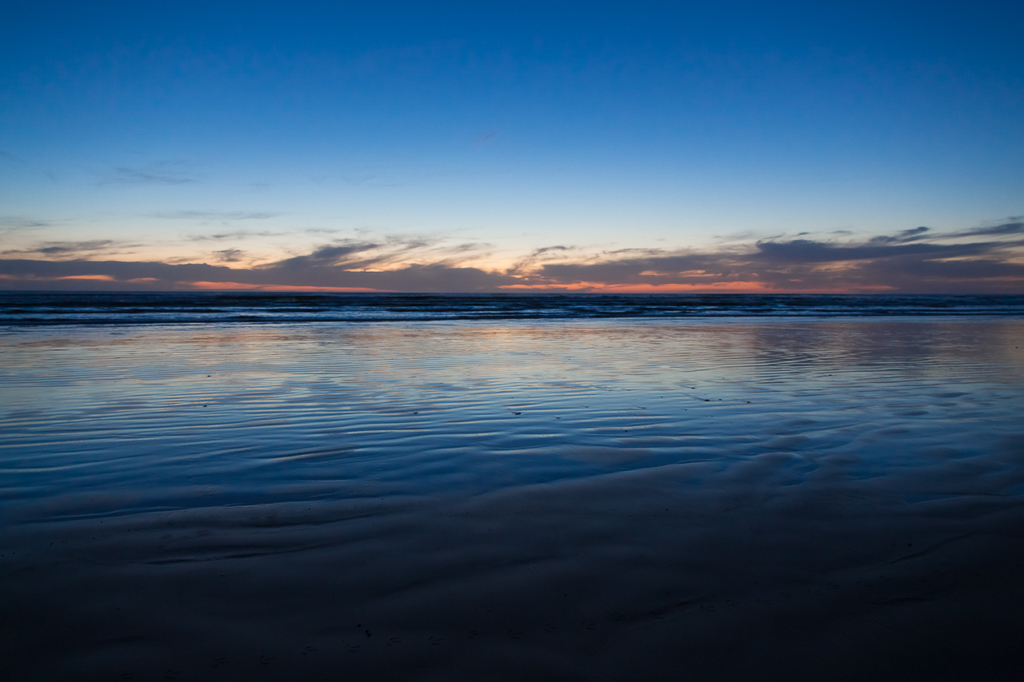