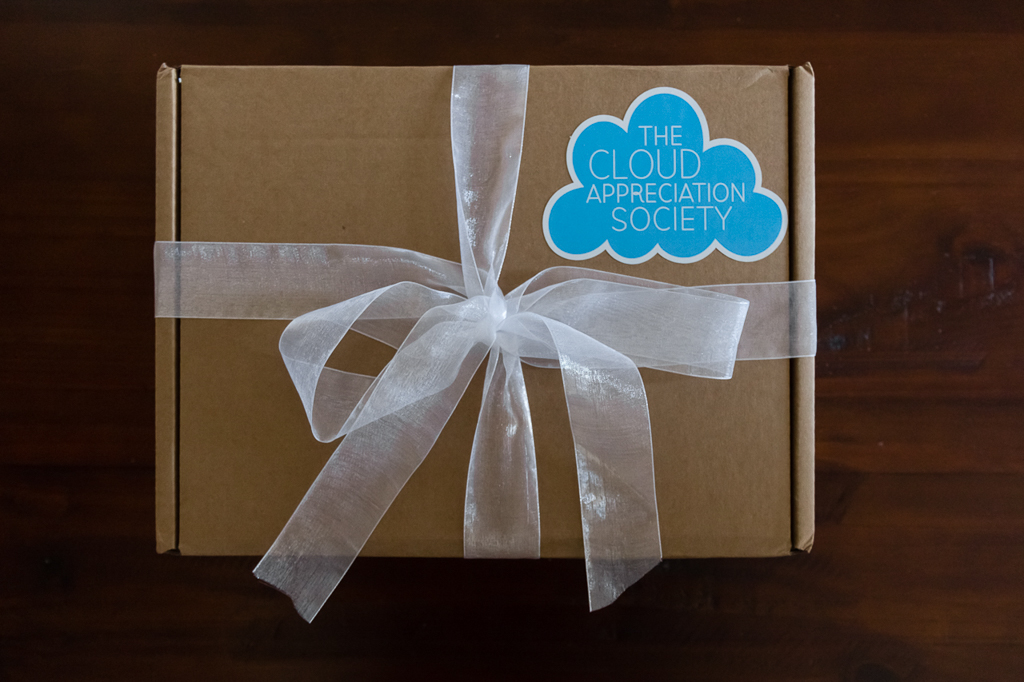 Okay, I give in. I’m officially giving the Great South West Walk posts a bit of a rest for a few weeks. You might be getting bored reading about that eternal trip, but what about me? I had to walk it, plus write it up as well. How about some sympathy for me? No wonder I’m on anti-depressants.

Instead, I’ve decided to put together a quick-fire entry about a few things that have been going on lately. I came up with the following topics which consist of clouds, cameras, and AARN Featherlite backpack. Oh, plus cycling, swimming and further discoveries amongst the piles of stuff that dad left behind.

That’s obviously too much for one post, so I’ve split them and will continue with the rest next time. Mind you, there’s not a lot about walking, as I’ve officially given up for the past week or so. Full time work and some bizarro heatwave that’s left me with a permanent heavy head. My bedroom is so hot it feels as if I’m breathing through a mouthful of cotton wool balls, so sleep (and oxygen) is very much requested.

First of all, I bought a new camera. Did I need a new one? No, not really and especially not the one I ended up with. I’ve looked at a few that would be easy to carry whilst walking, but in the end I decided to get the Canon 6D which is the complete opposite of what I was initially looking for. I’ve always wanted to step to a full-frame DSLR and this seemed quite a reasonable price to get there.

Oh yeah, I bought it as a grey import which was always on the cards when I found out it’s $750 cheaper than buying it in a shop here. Can this price difference be possible? There’s always the warranty problem, but for $750 I think it’s worth the risk. Anyway, it has the 24-105 mm L-Series lens which is my first introduction to the build and optical quality of Canon’s premium lenses. Here it is in my kitchen studio. 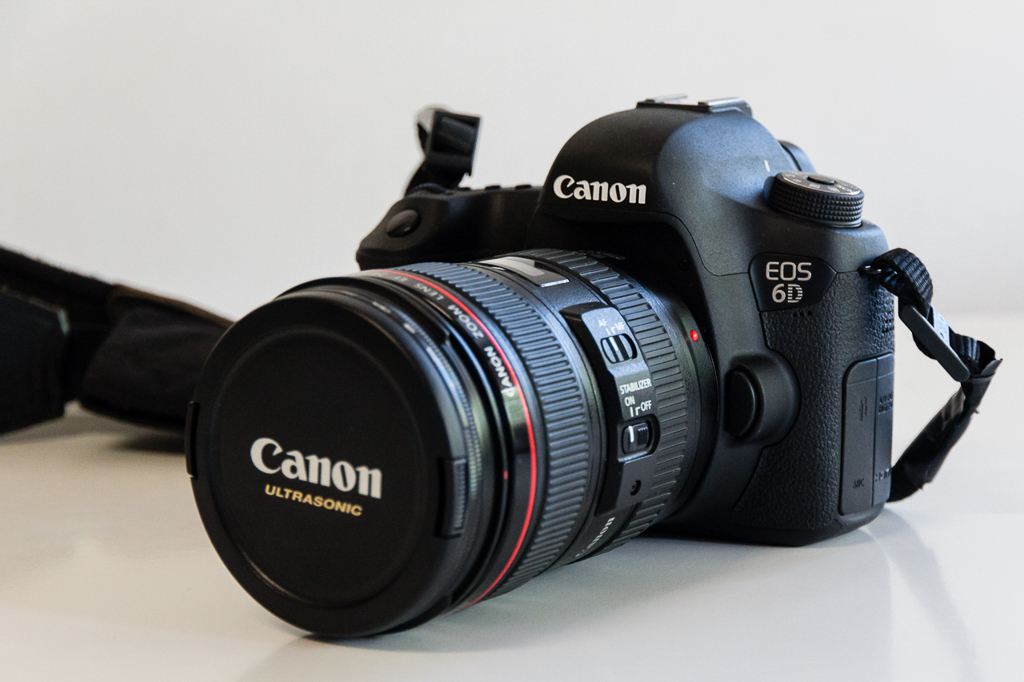 The first thing I did was throw the official Canon strap with the cameras name emblazoned all over it in bold letters to the back of the wardrobe. Straps like that make feel traumatized, which may reflect on me as a bit of a wanker more than anything else.

Instead, I’m using a Lowepro strap, which is wider, more comfortable and has a pouch to slip a spare memory card into. That’s more like my style. There are a a couple of reasons why I might not use this camera on an extended hike though. Firstly, I’m bound to destroy it and secondly, it’s a bit weighty. 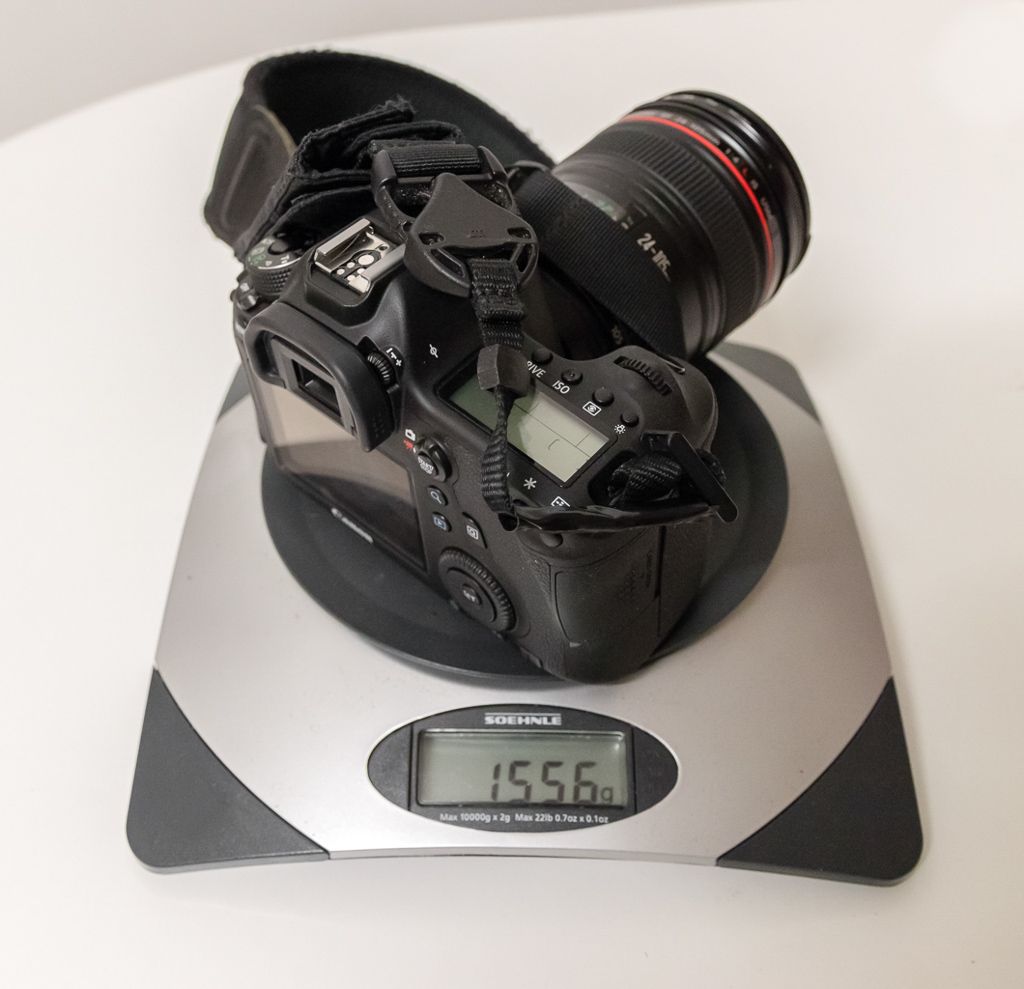 Actually, just over 1.5 kg is okay on a daywalk, but it’s unlikely to come along on a weekly jaunt. Anyway, since it appears Earth has swapped places with Mercury this past week, I haven’t really had a chance to take pictures. The Cumulonimbus Calvus post a few weeks ago has been its only real outing and it seemed to go fine.

If you didn’t already know, I’m generally quite demanding of my cameras, but I’ve become an expert at simple fixes. If you want some repairs done, then I’m your bloke. Here I am after successfully removing a particularly stubborn UV filter on the end of a lens. With a hacksaw and pliers. 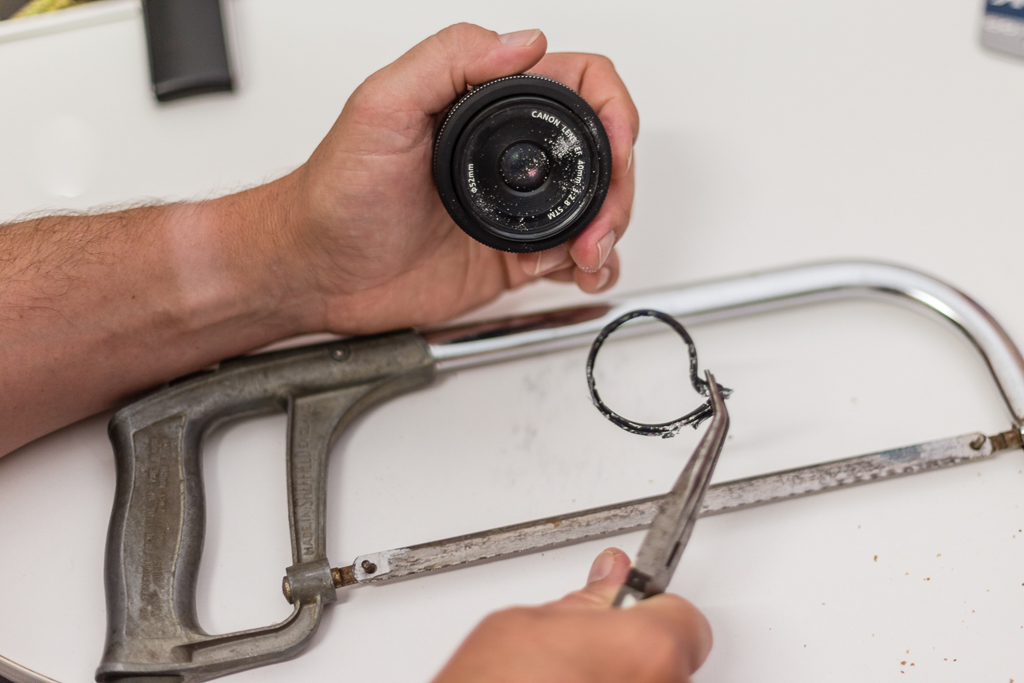 As you can see I tend to use simple, subtle techniques and tools for my repairs. Feel free to drop any gear off and you know I’ll take good care of it.

Now, hiking plans. I’ve got a couple of months of work coming up (yay for me) and I’d put a lot of planning into a tilt at the Australian Alps Walking Track (AAWT) starting in late March. I figured at the least I’d do the initial section of Walhalla to Hotham which is about 16 to 18 days of walking and roughly 220 km. Well, that was a great plan until bushfires started more or less everywhere in mid-January. I was looking at the official Country Fire Authority (CFA) website in February and noted there were fires all over the state. Here’s the screenshot I took. 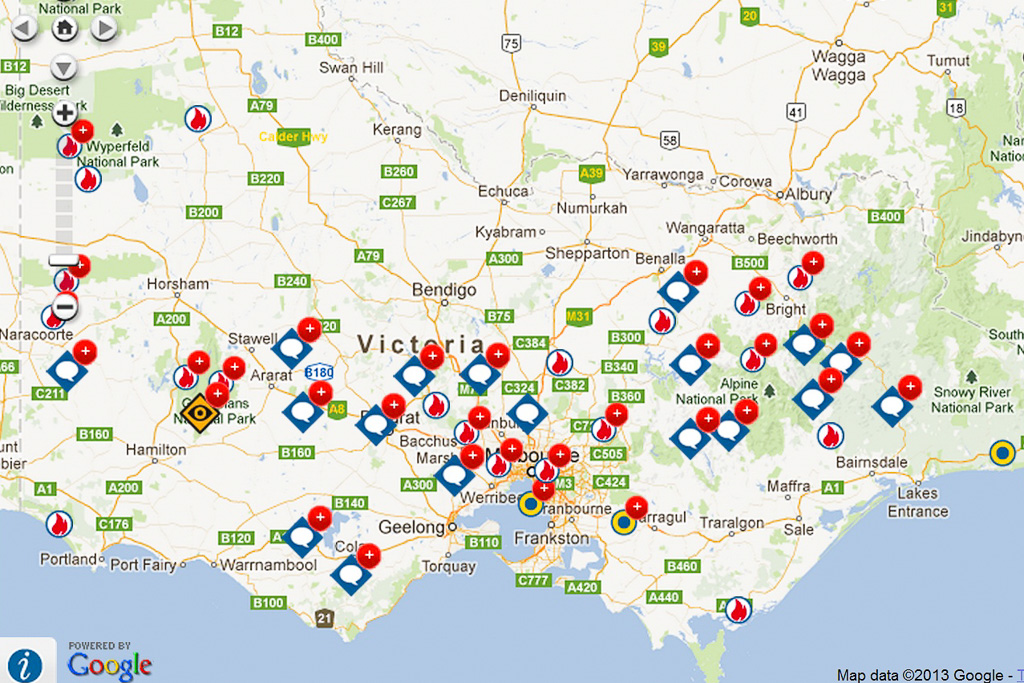 In particular, a nasty fire slap-bang in the middle of Mount Hotham. This was where one of my intended food drops was going to be and once the highway to Hotham was closed, I just looked at myself and said, “What are you doing? Forget it!” Planning a hike like that in autumn after a hot summer was insane. Lack of water and fire risk meant I lost interest and I’ve decided that if I attempt it, then spring would make more sense. At least there might be some water around.

Now, this is where the new backpack comes in. During the planning for the AAWT I was wondering how much weight I should carry with particular attention to water. If only they could make dehydrated water? It’s heavy stuff and frankly, my neck can’t take a lot of pack weight any more. I’ve had dodgy neck for a few years now and was actually down to have a ‘C6/7 anterior cervical discectomy and fusion operation’. Instead, I went for quick fix and had a temporary treatment of a cortisone injection into one of the troublesome spots. It’s not too bad, but I’ll revisit that when I do the cycling post next time.

So, how to carry a lot of weight if required? Well, I’ve gone for something a little radical and purchased an AARN Featherlite Freedom backpack from the Backpacking Light store in Melbourne. That’s the only store that sells them and there’s quite a competition with the staff as to who’s the ‘ultimate AARN backpack fitter’. Here we are in the kitchen studio again. 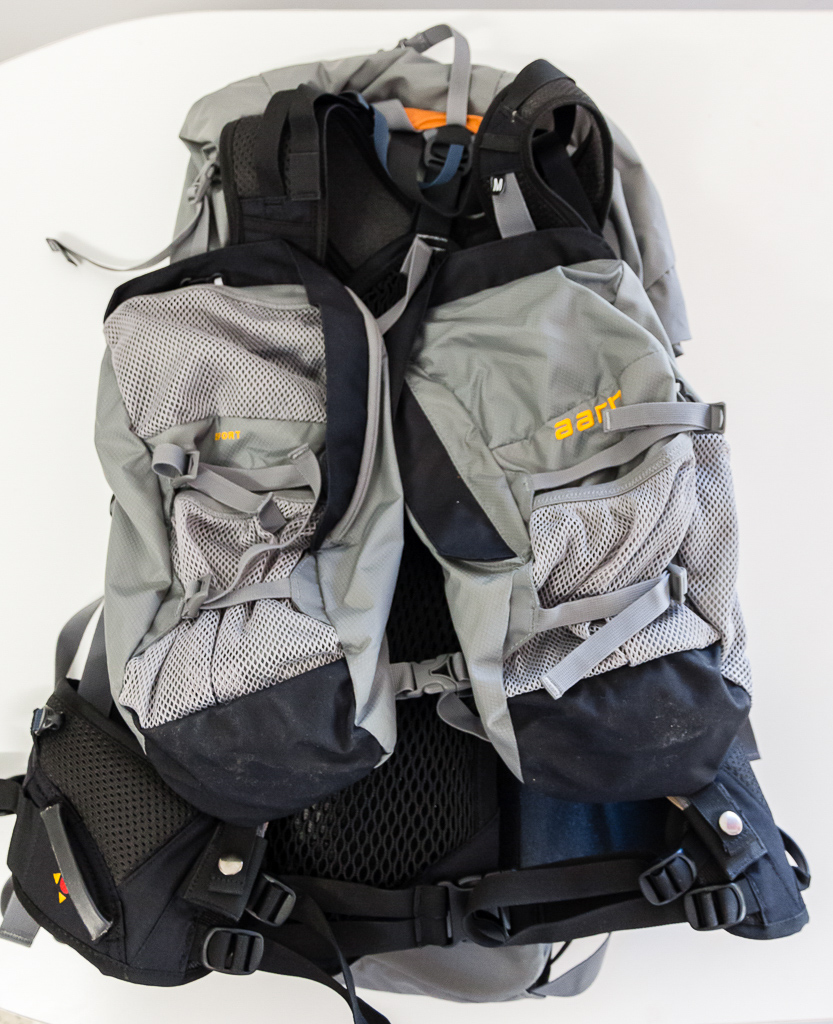 I’ve looked at AARN packs before and they’ve always appeared a little wild, with the heaviest items carried in front pockets. In theory it makes sense and they’re raved about by anyone who’s used one extensively.

I must say I wasn’t sold on the idea until trying one on in the store. It was loaded with 16 kg and it didn’t feel like I had that weight on my back. Instead it felt more like a heavy daypack. Sure it might be the placebo pocket effect taking charge, which I believe is an actual condition.

The front pockets do seem a little weird though and I wonder what they’d be like to walk in? Restrictive view down? Get in the way? What about during some scrambling? Well, I had to try it out, so I ventured out to test them whilst climbing a vertical cliff-face.

I loaded the front pockets whilst free-climbing this vertical face and it didn’t feel too bad. It was a tough climb as well, so it’s lucky there were some drinks on offer on the way up. 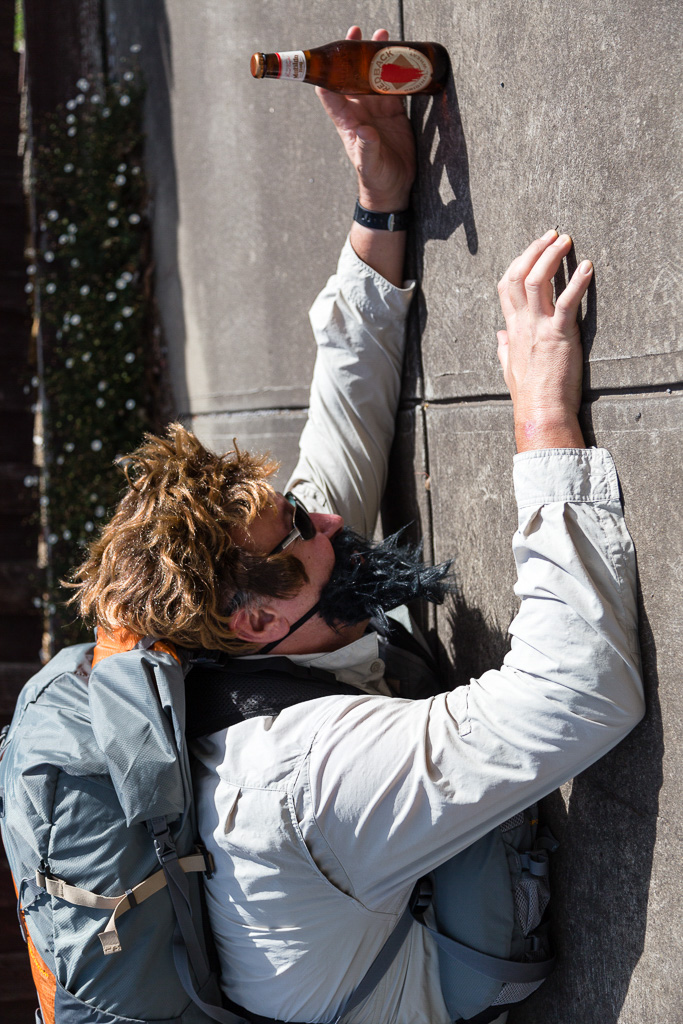 So, the pack is kinda sorted, but it’s going on a couple of trips before heading to the Northern Territory, just in case I despise it in actual use.

Now, to finish off you’ll be pleased to know I’m now an official member of the Cloud Appreciation Society. I’m a big cloud fan and it probably explains why my neck is so creaky. All of those years with my head flung back, horizontal to the ground whilst perusing the sky is bound to cause some aggravation. It was quite a big day opening the gift box. Look at some of the treasures I now have! How about the cloud mug…? 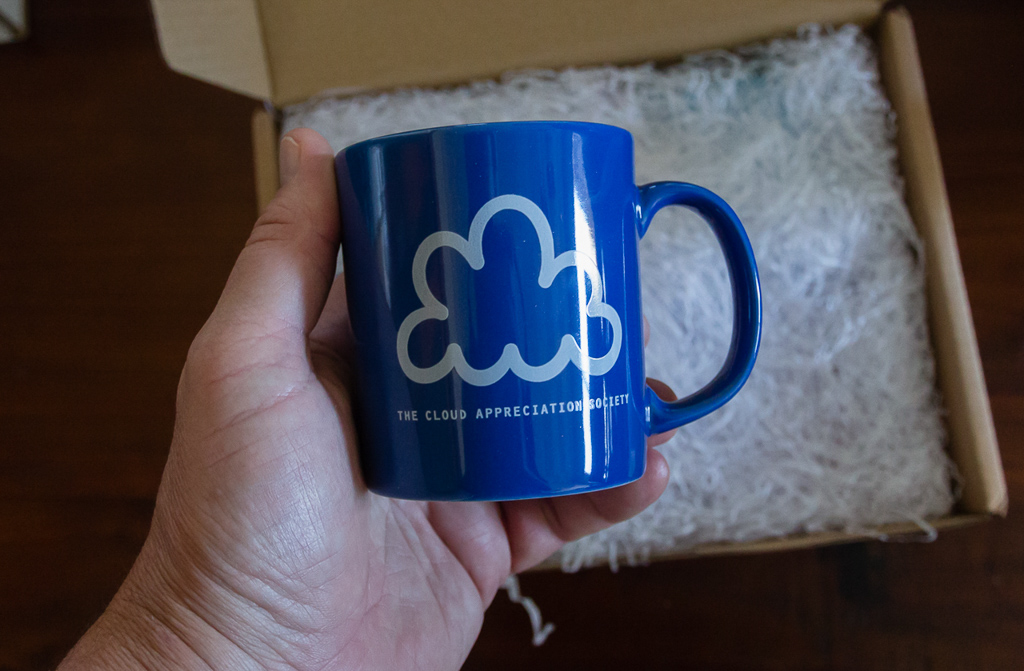 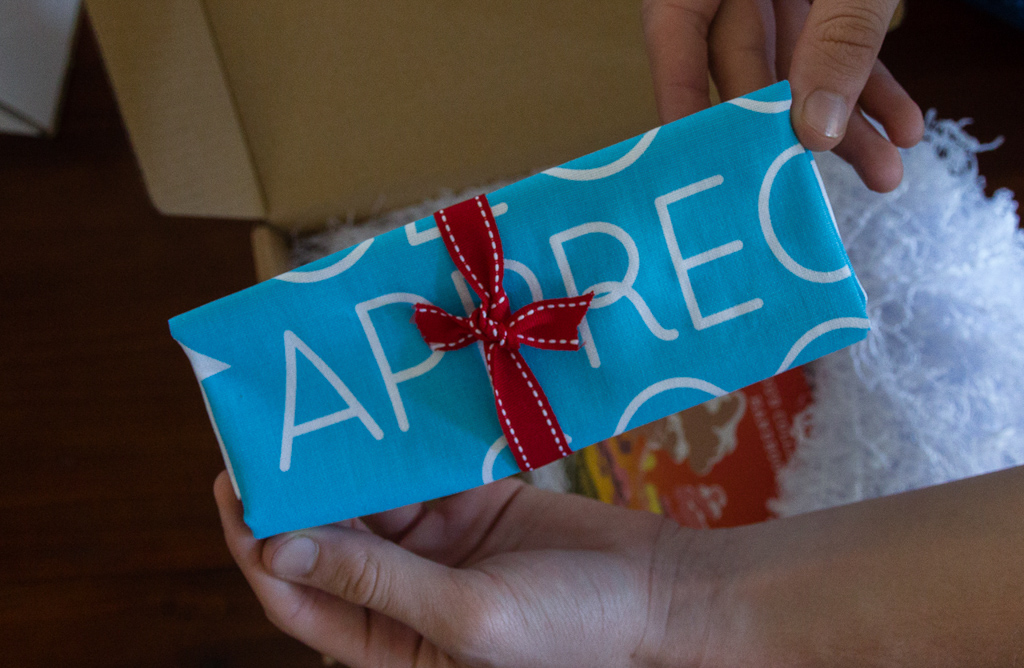 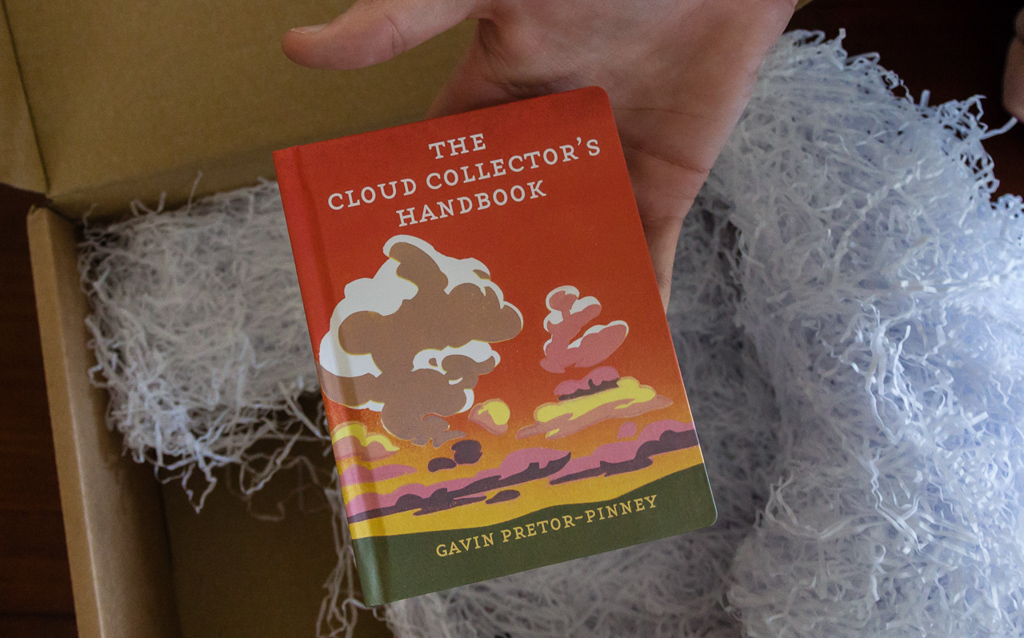 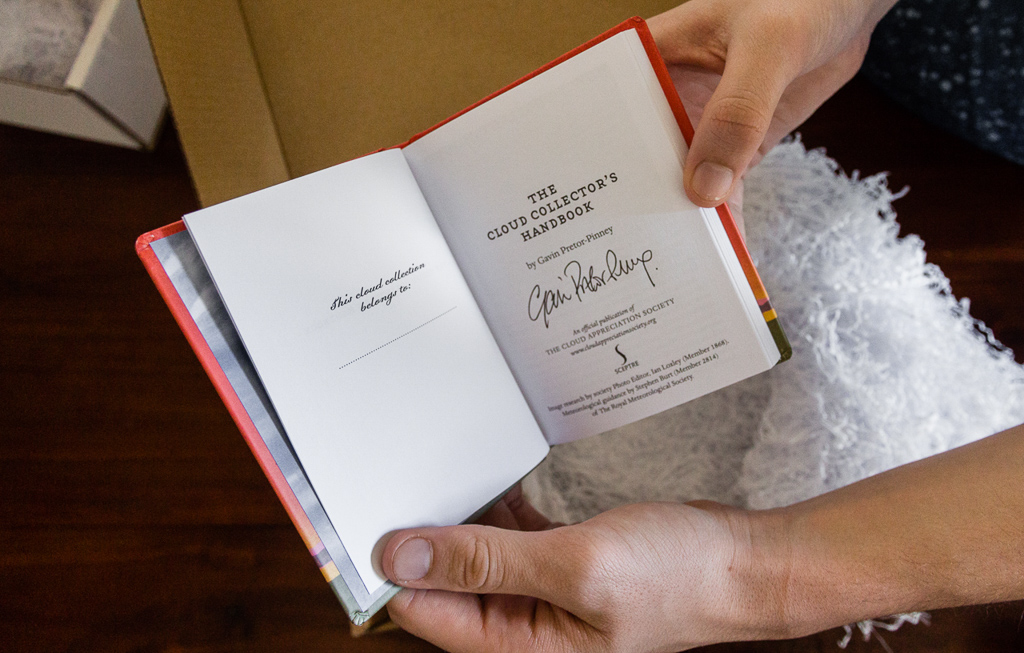 There’s other stuff as well, but I can’t show it all. In order to finish this post off, the last item you have to see is the framed certificate which now sits amongst other quality items on my mantelpiece. 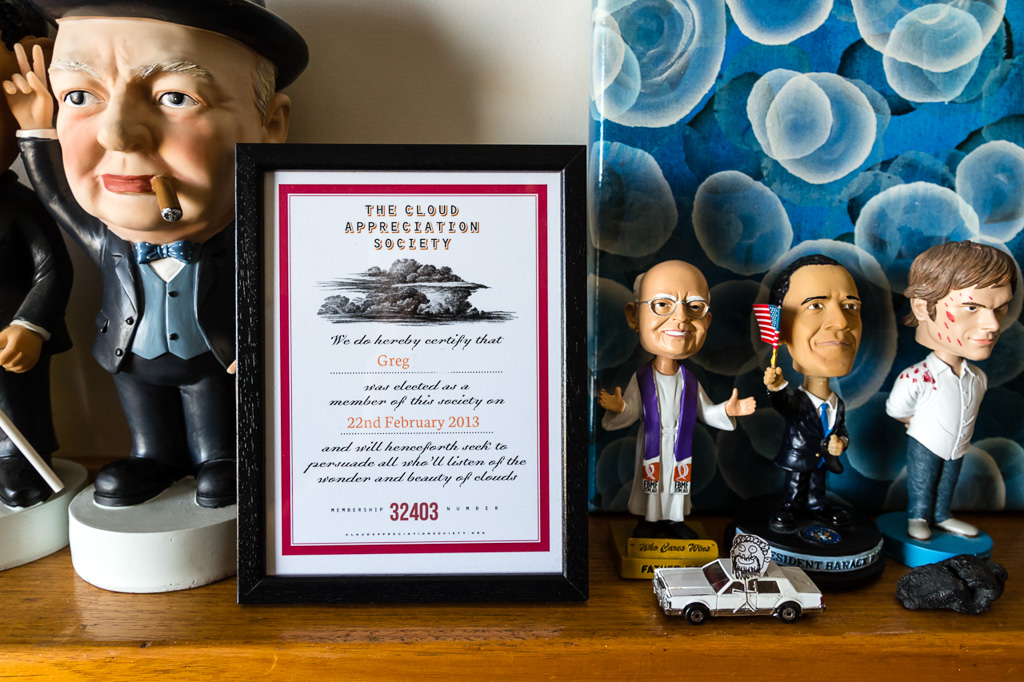 It was a big day, but before displaying I noticed that the trinket collection was a little dusty. There definitely had to be some cleaning and the Father Bob bobblehead needed a bit of an extra spruce up with the Spin Duster. As you can see, I think he enjoyed it… 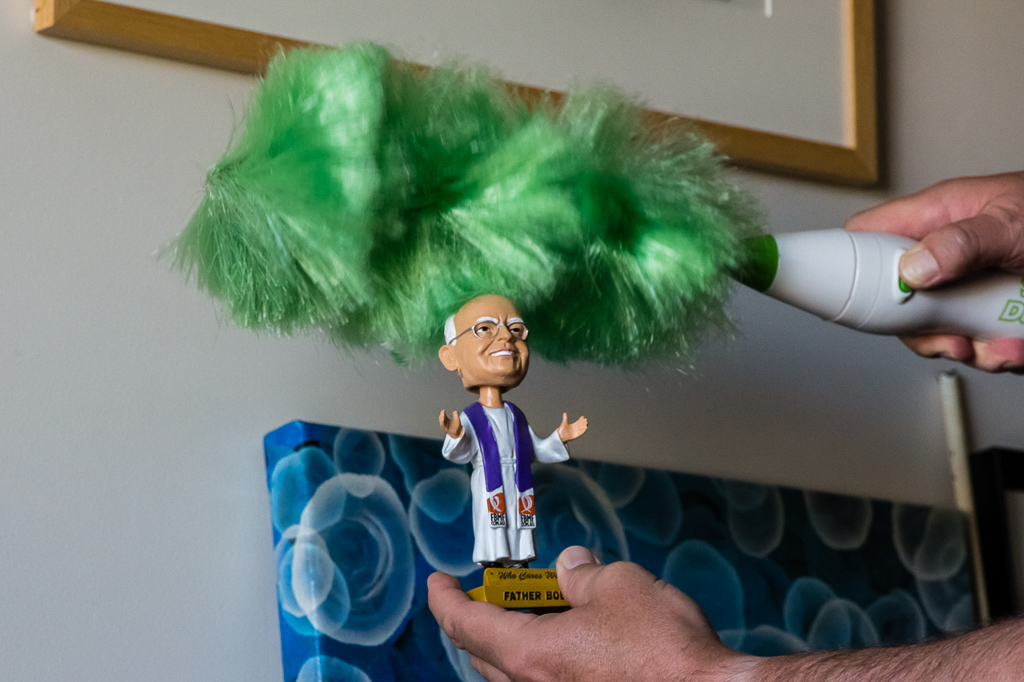