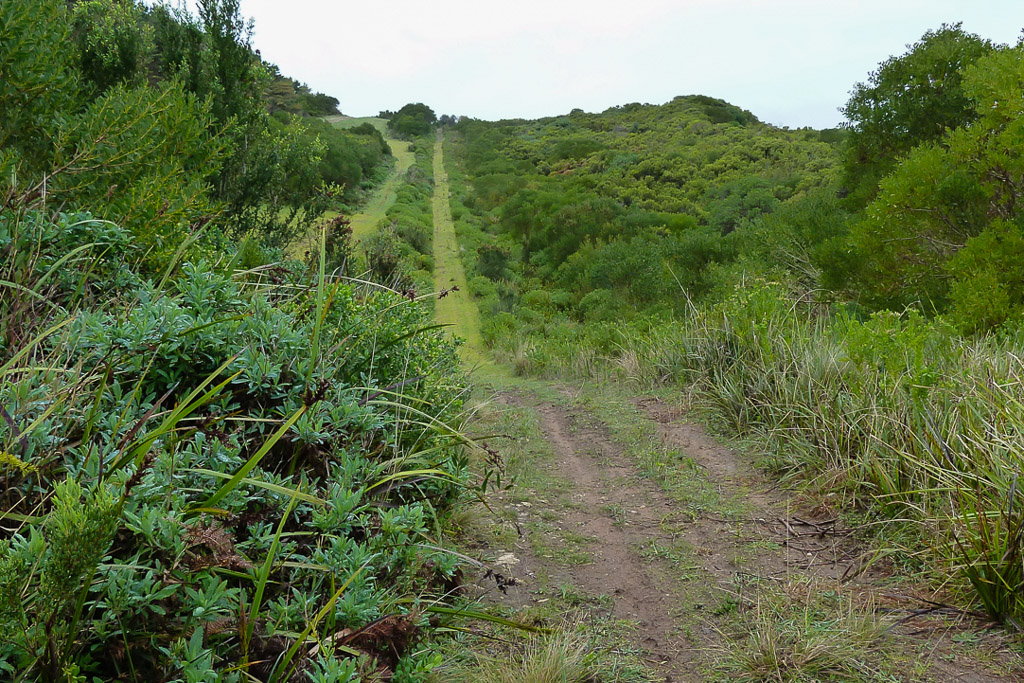 I bet you’ve been waiting for this post, haven’t you? All I can say is this 20 km section from Swan Lake to Tarragal, Great South West Walk was the dullest of the entire hike. I’m sure you already know that, as I started bleating about this particular day about five posts ago. Mind you, I’ve been doing that for your welfare, as I didn’t want you coming here expecting something special and instead finding yourself face down on the floor dribbling uncontrollably from a crippling coma attack.

Smuffin and I had decided pre-walk that we were headed inland to Tarragal camp which was about 20 km away. This leg goes over the 234 metre heady heights of Mount Richmond. Don’t be fooled by what seems like a low height, as I’d suggest only bagging the summit with supplemental oxygen.

Right. The alternative. (Oops, I’ve just realised I told anyone who’s not doing the walk to come back after the previous paragraph. As it is, I’m still rambling, so if you’re back and wondering what’s going on, then I suggest running back into the kitchen pronto).

You can continue to follow the beach, skipping Tarragal camp and heading to the next at the Springs. Mind you, I think this idea’s completely bonkers. A minimum 20 km slog on sand? Maybe in summer if you’ve got the tide worked out, but no thanks. We were going inland. Oh yeah, we also had food drops hidden in the bush at Tarragal camp, so we didn’t have an option anyway!. Wow, that’s three long paragraphs of waffling and I’m still not convinced any of it makes any sense.

We set off from Swan Lake and things were going well for the first 17 metres until we came across this sign. 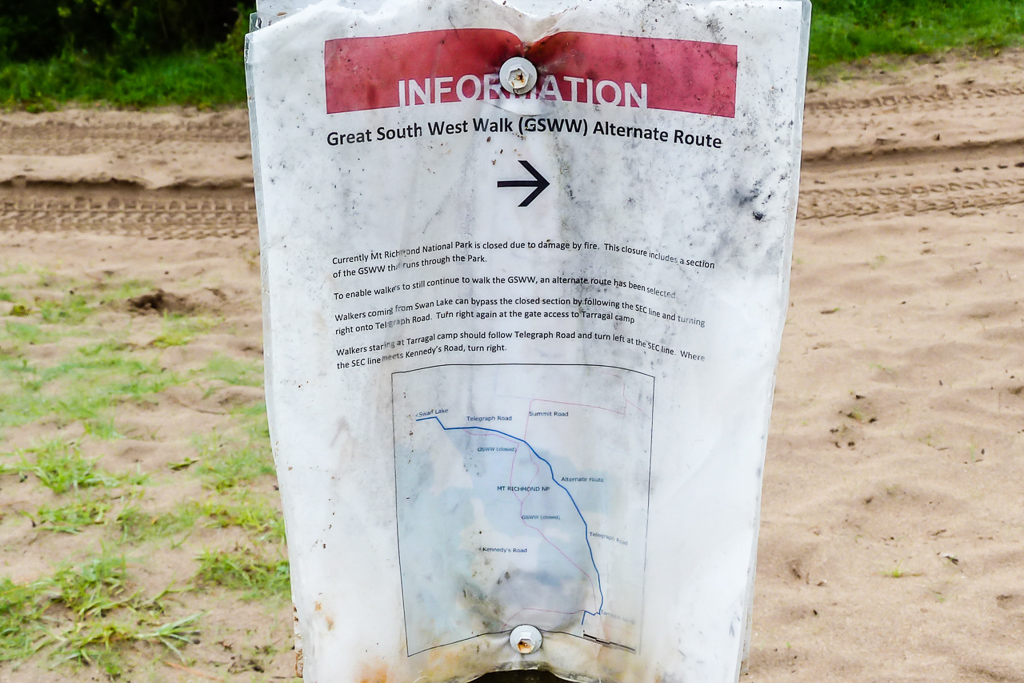 Huh? Mt Richmond National Park closed due to fire? Walkers take an alternative route? Seeing how this was winter and the sign was as weathered as an old pirate map, I had a feeling someone had forgotten to take it down from the previous summer. Then again, we had no idea, so we pondered for a moment and took in the view of Swan Lake. 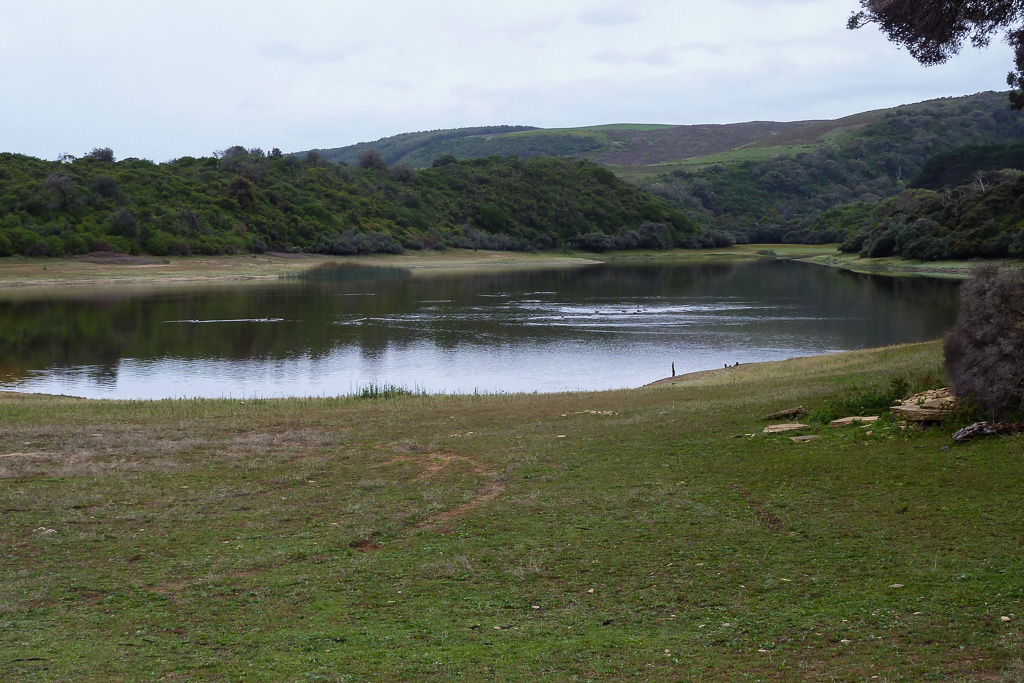 The picture actually makes it look pretty good, as it’s distinctly underwhelming in real life. Believe it or not, but guess who turned up whilst we were looking at this patch of water? Yep, it was our camouflaged LIGHTFORCE friends from the previous evening. They drove up towing a boat and for sure I thought they were going to launch it. I’d loved to have seen that happen, as it would’ve been like putting a boat in a bath tub. Just when it looked like the craft was going to be unhooked, they drove off. I hate it when people suddenly act sensible.

So, that was the entertainment over for the day. Smuffin and I headed off, but it didn’t take long for the walk to turn into a slog. There just wasn’t much to look at with a track that headed over rolling hills passing pine plantations on the way. 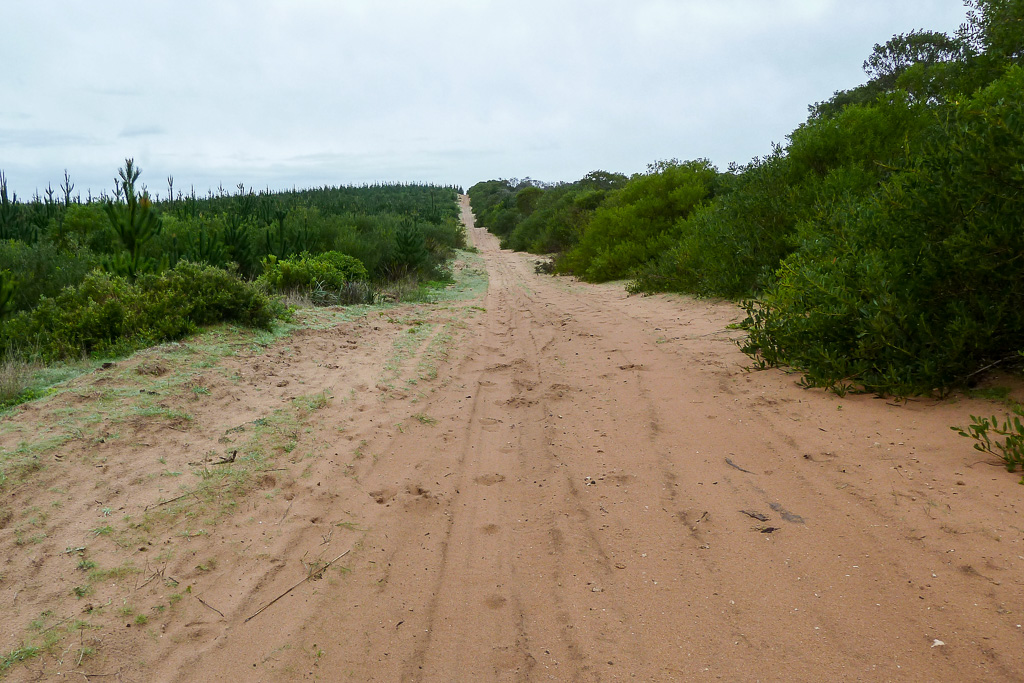 The grey skies didn’t help the overall mood, especially when the first spots of rain fell. We soldiered on and one of the highlights by far was a stile we had to climb over. Let’s look at some of the action. 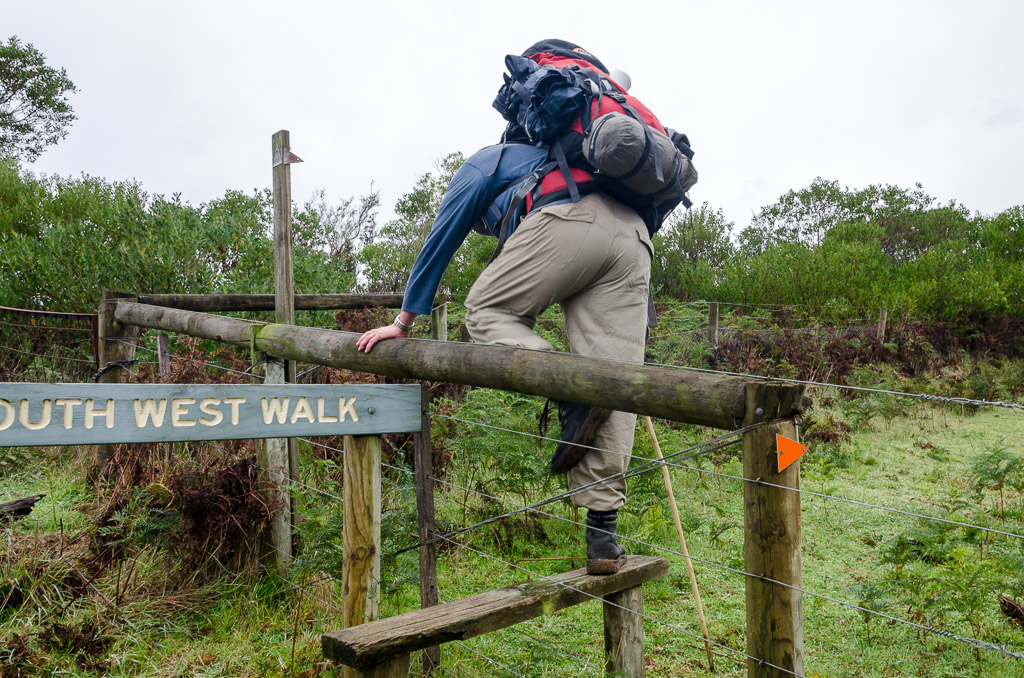 This bit was so exciting I considered climbing back just for the possibility of slipping on the wet timber. At least a fall would liven up the day. Moving on, there was some large fungi by the track, but I must have been so de-mojoed that out of three photos taken, none of them are in focus. This is the better of the three blurry ones. 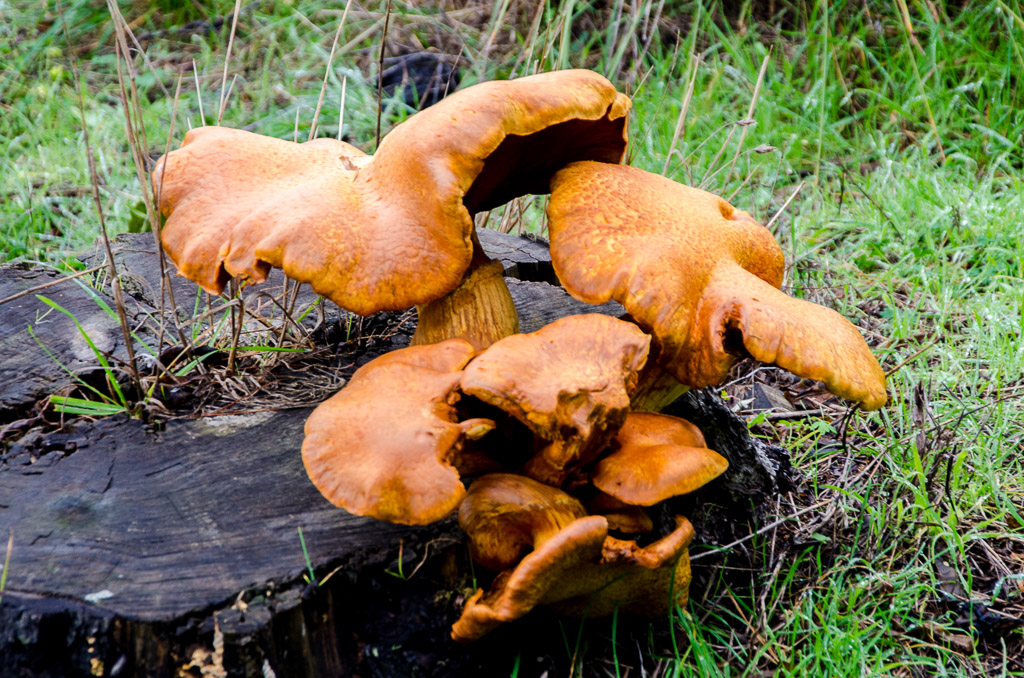 Wandering on, we passed a few fields… 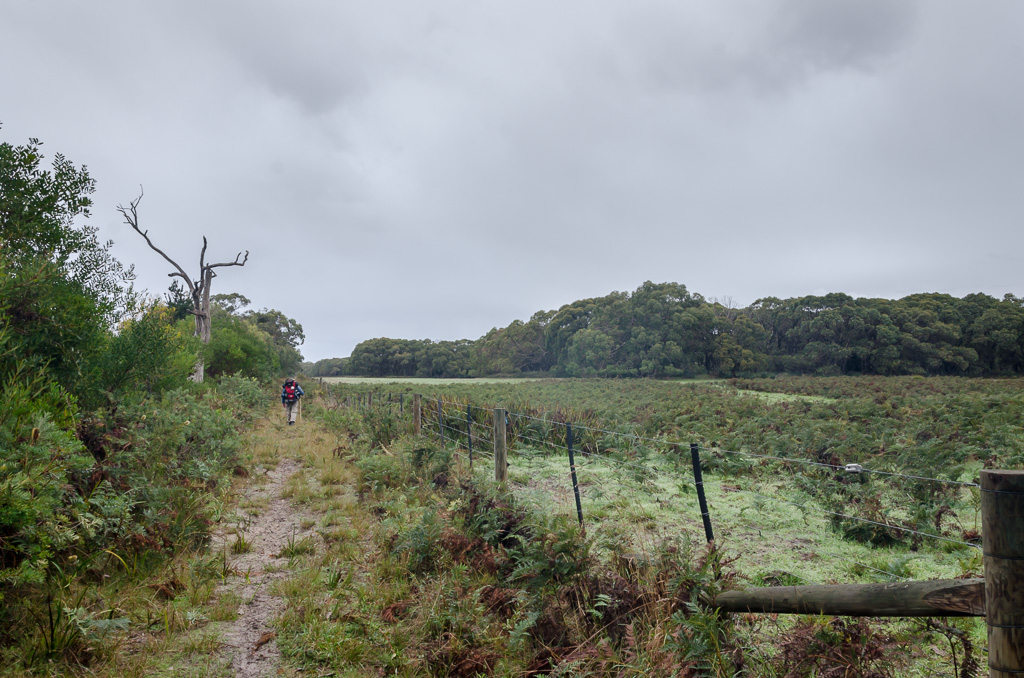 …before reaching Telegraph Road. Surely the walk through the rarefied air to Mount Richmond was open? Who knows? Don’t ask us, as we’d officially given up for the day and decided to bash down Telegraph Road to Tarragal camp.

Initially it was a little sandy… 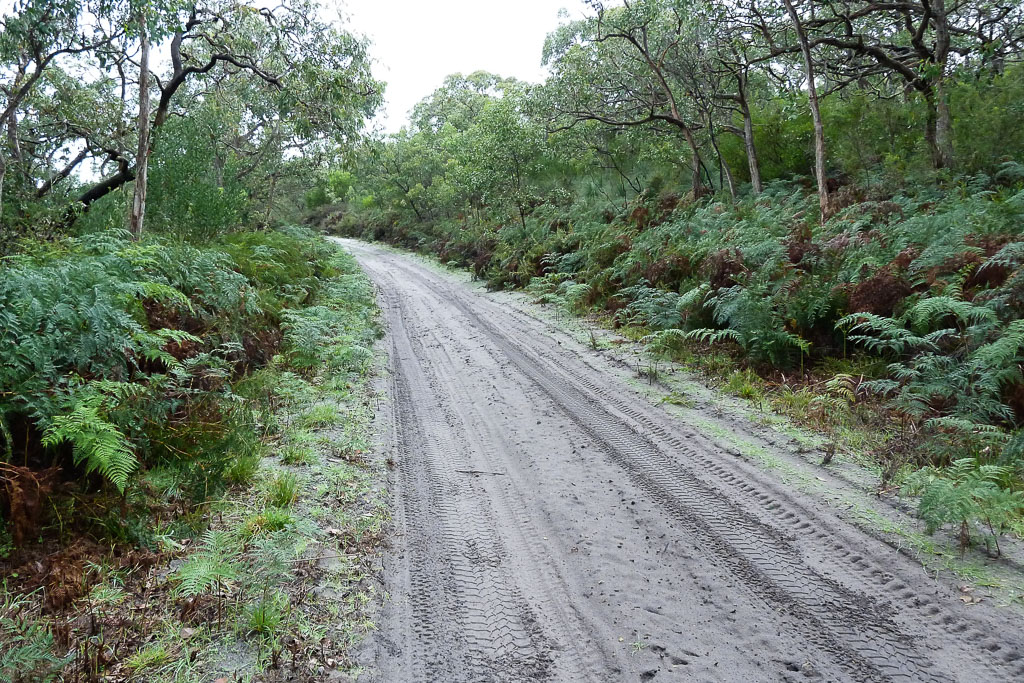 …which made for some more ‘highlights’. What’s going on with the drivers down there? I thought the exhaust and muffler were something one should retain on their vehicle? Maybe the driver who owned this was also under the soporific spell of Telegraph Road and couldn’t be arsed collecting parts of his car after it bottomed out on one of the many potholes..? 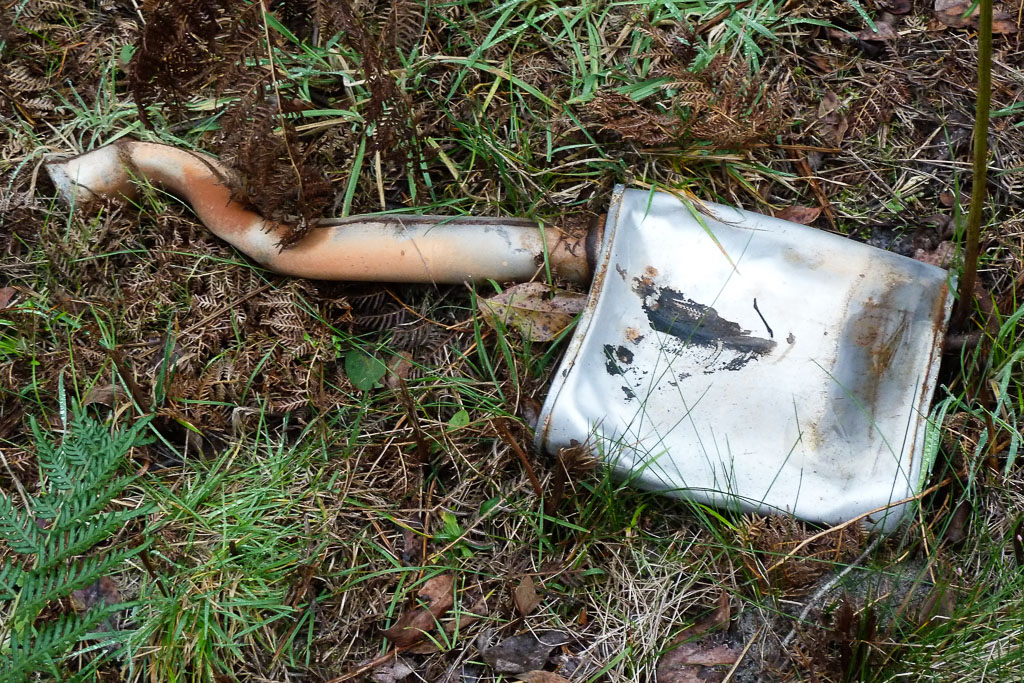 Muffler? Exhaust? Who needs them?

Our disinterest was reaching monumental proportions and just to rub it in rain started to fall. Heavily. The cameras went away, but not before finding some more roadside treasure. 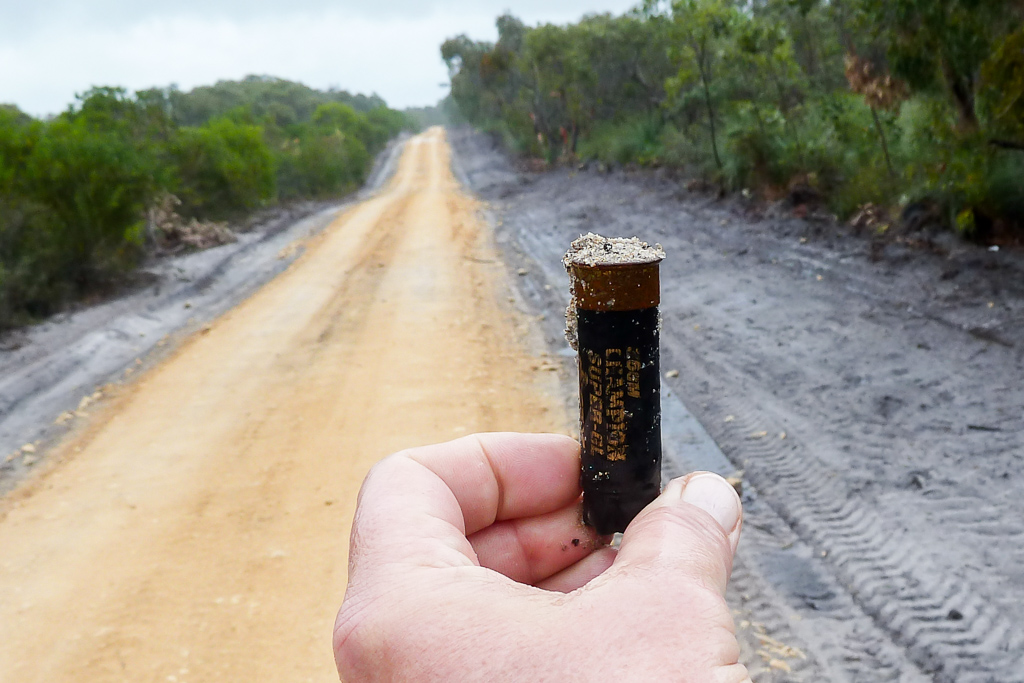 We were getting near camp, which was lucky as Smuffin suddenly had a mental meltdown. The rain was heavy and it was pretty cold. I was feeling dry and toasty in my overpriced wet-weather gear, but Smuffin had gone for the opposite approach to his protective clothing. Lightweight and dirt cheap was his motto. This sounds fine, but the writing was on the wall when he pronounced, “Hang on, all my clothes are wet! The raincoat and pants appear to have been designed to be porous. I’m wearing blotting paper!!”

This was true. Everything under his rain protection was soaking wet, which confused me as to what role the raincoat was playing at. It seemed to allow all water through and then complete its task by refrigerating the body core. That’s weird isn’t it? I even checked the tag on his raincoat to see if he’d accidently bought a jacket with the less known ‘water-acceptance’ fabric.

We didn’t know at the time, but the rain wasn’t going through the jacket and pants at all. What was happening was that the expensive technology of the material ($10 for the pants. Jacket was slightly more expensive) was preventing any form of moisture to escape, so essentially he was drowning in his own juices. We arrived at Tarragal camp and Smuffin body-surfed into the shelter on his own sweat. This was great, but as soon as we stopped walking he began to freeze. There was talk of pneumonia, hypothermia, cryogenics, ice-cubeness, the Boomerang Nebula, and a world without potatoes.

I successfully found my food drop in the bush… 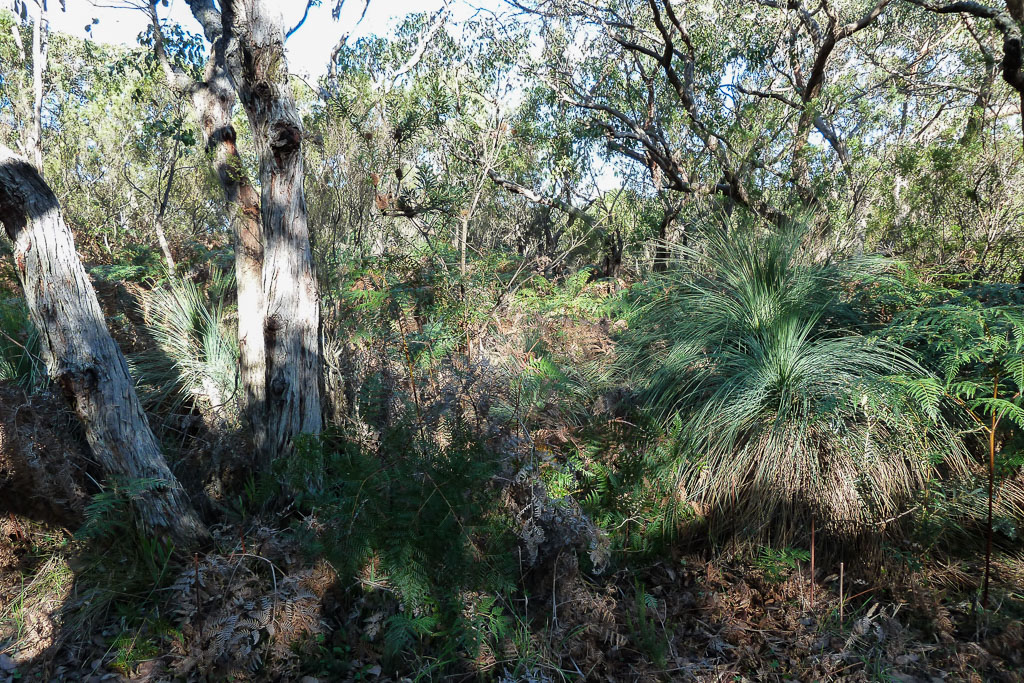 My food drop is just in there. Past the branches, twigs, ferns, trees and other stuff.

…and noted that the overall distance of the hike was starting to add up. 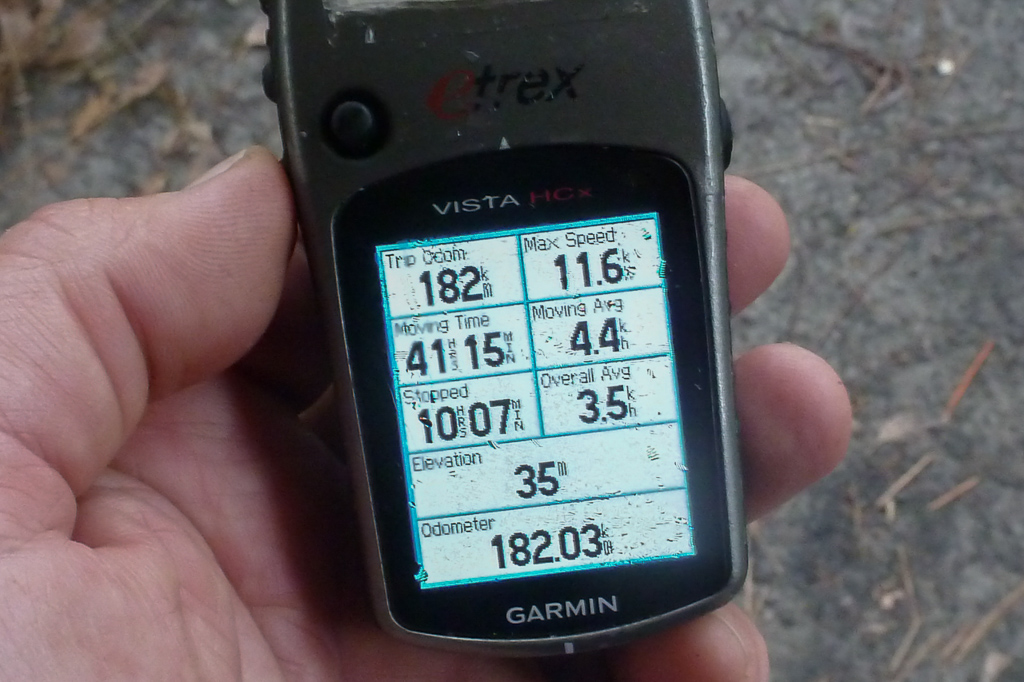 Tarragal camp was a bit of a shocker in the heavy rain with heavy tree cover blocking light and creating a claustrophobic feel. Smuffin disrobed and hung up 110% of his clothing to ‘dry’ and got into the sleeping bag, but didn’t appear to be warming up. He was placed on suicide watch at Guantanamo-Tarragal and here’s a photo taken that night during one of the welfare checks. This was taken during some light-hearted banter. Imagine what he looked like when he wasn’t laughing. 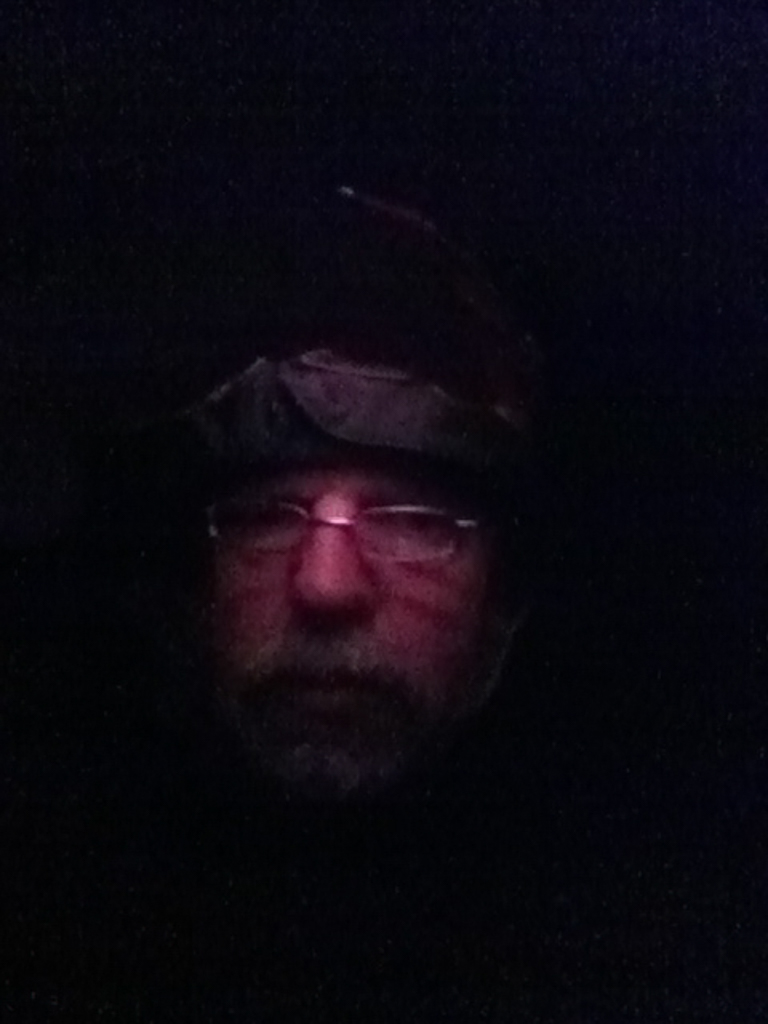 That was it then. A 20 km walk in the rain, roads and pine plantations which I can’t say I’d ever want to do again. Obviously going via the towering Mount Richmond would be a better bet, but one can’t have it all. In cycling terms this was a ‘transition day’!

It continued to bucket down and I went to bed early. Things were going great in the pouring rain until there was a major equipment drama at about 2 am. That will need quite a few paragraphs to explain, so I’ll leave that for the next post. Then again, I think I need a GSWW distraction and I’ve decided the next post will be a bit of a catch up of what has been happening lately. It’ll be a bumper issue containing bicycles, blood, new camera gear and some more ‘discoveries’ amongst my dads things. I can’t wait myself…