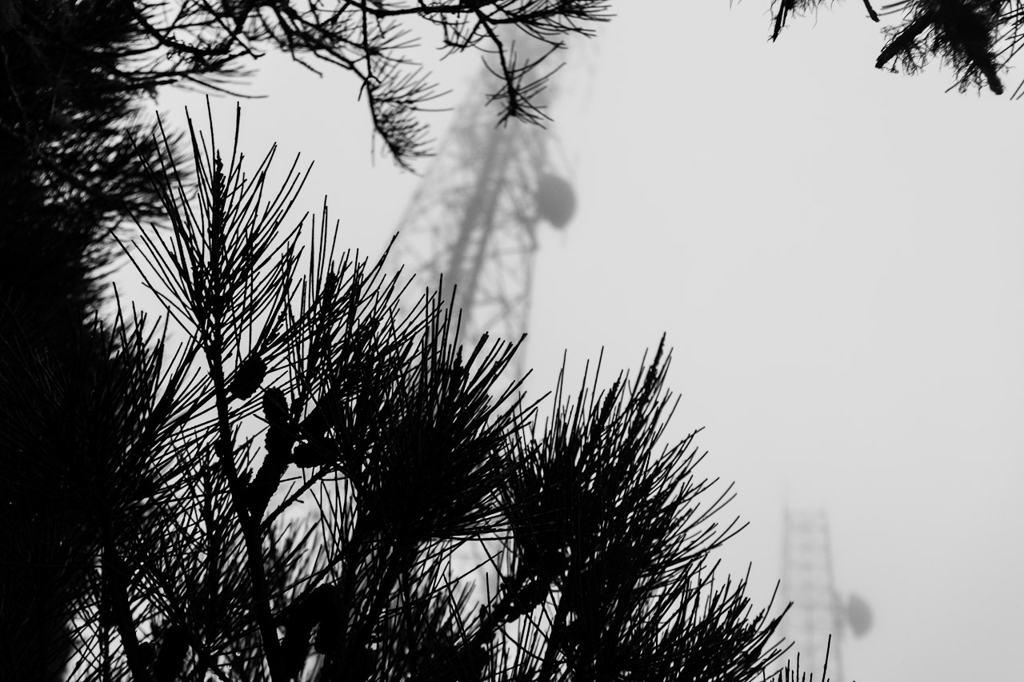 You know what? I was going to continue with my eternal report of the Great South West Walk hike, but I found these photos and decided to do a quick-fire post instead.

Sure, this post reads as Mount William, Grampians National Park and guess that might be a touch confusing, as you can more or less drive to the summit.

Do you remember the report of Smuffin and I attempting to race across the Major Mitchell Plateau in a day? Well, I think I’ve kept this secret, but we returned only a few weeks later to do the same walk with difference being that we’d do it over two days. The previous walk was spoiled a bit by trying to race along in order to finish it before dark. The views were so good though, we decided to return and stroll across the plateau in a leisurely fashion instead.

So, with work interfering with my hiking life, I elected to take a week off to slot this walk in somewhere. The trouble is the day I picked went from an initially lovely forecast to the dreaded one of ‘showers’.

Now, if you’ve ever read this blog before you’ll see that a previous time I headed up to Mount Difficult in the Grampians I fell for the ‘shower’s forecast, which actually meant ‘six hours straight of belting rain’. As a result, the night I spent near Briggs Bluff has been thoroughly burnt into my memory and it’ll take some budging to remove it. During the freezing evening lying in a wet sleeping bag, I began to curse that none of the people camping around me had brought a firearm, just so that I could shorten the night with a bullet.

Actually, the other day I was reading about hikers in America carrying pistols. Is that true? If I was over there I’d be leaving my guns with the Sheriff. If not, the first sign of some hill climbing pain I’d be reaching into my pack for the snub nosed ·38 to put myself out of my misery. Come to think of it, just putting the backpack on would make me want to let off zingers everywhere.

Where was I? Oh yeah, we were heading to the Major Mitchell Plateau. I headed up to the Grampians and rendezvoused at base-camp which was actually the Smuffin HQ caravan. The weather was looking slightly ‘problematic’ with low clouds all around, but I was confident they’d clear (why would I think that? I must be going bonkers).

Whilst getting ready, there was still time to admire the abundant wildlife of the Grampians. The birds have no fear around people and will readily jump on top of you if food is about. Well, sometimes there was, as Smuffin had a favourite trick of throwing bread into peoples laps, just so the birds jump on board for a feed. Smuffin may look like a hitman from a Colombian drug cartel, but he does have a pretty good sense of humour. 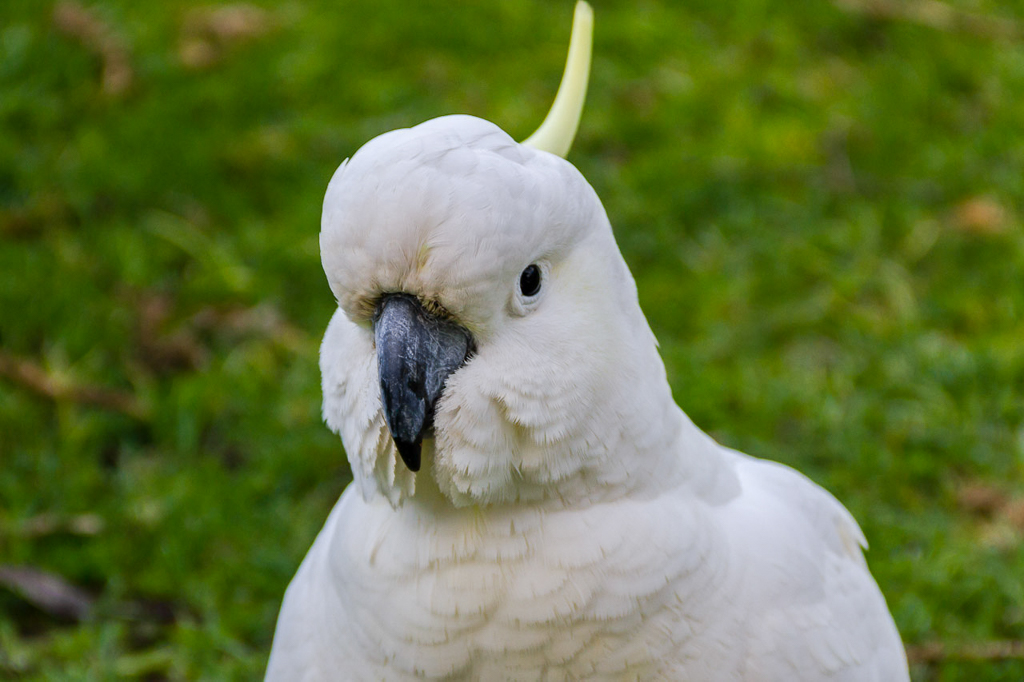 Actually, if accompanying tourists from overseas, then the Grampians are the place to go for an overdose of ‘Australiana’, as there’s wildlife on tap to check out. 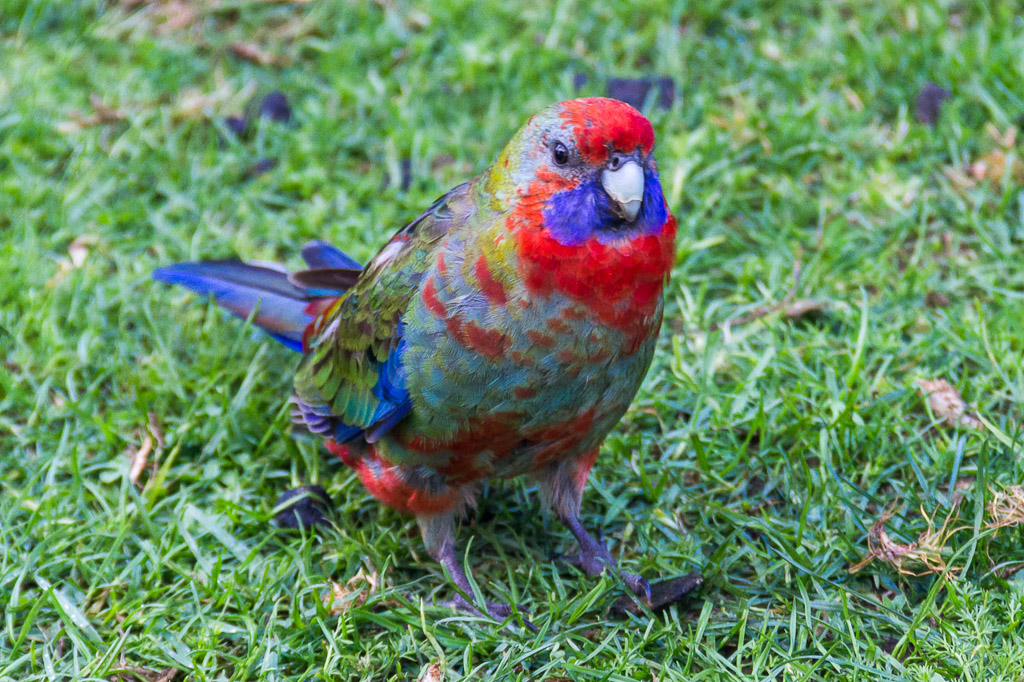 Anyway, we had to leave our squawking feathered friends behind, as Lady Smuffin took us to our drop off point which was half-way up Mount William. Now, that showers forecast was looking a little shaky, as we climbed up the road in the car. There seemed to be the slight problem of, ‘not being able to see a bloody thing’. The entire mountain was covered in low cloud which sort of made the whole point of this hike, well… pointless.

The idea was that we’d have clear skies to check out the scenery across the plateau, but at this moment we couldn’t even see a 100 metres in front of us. Oh well, we got out of the car, put the back packs on (where’s my pistol?) and set off into a swirling mist. It was so glum, I’ve converted my photos to black and white to capture the bleakness. 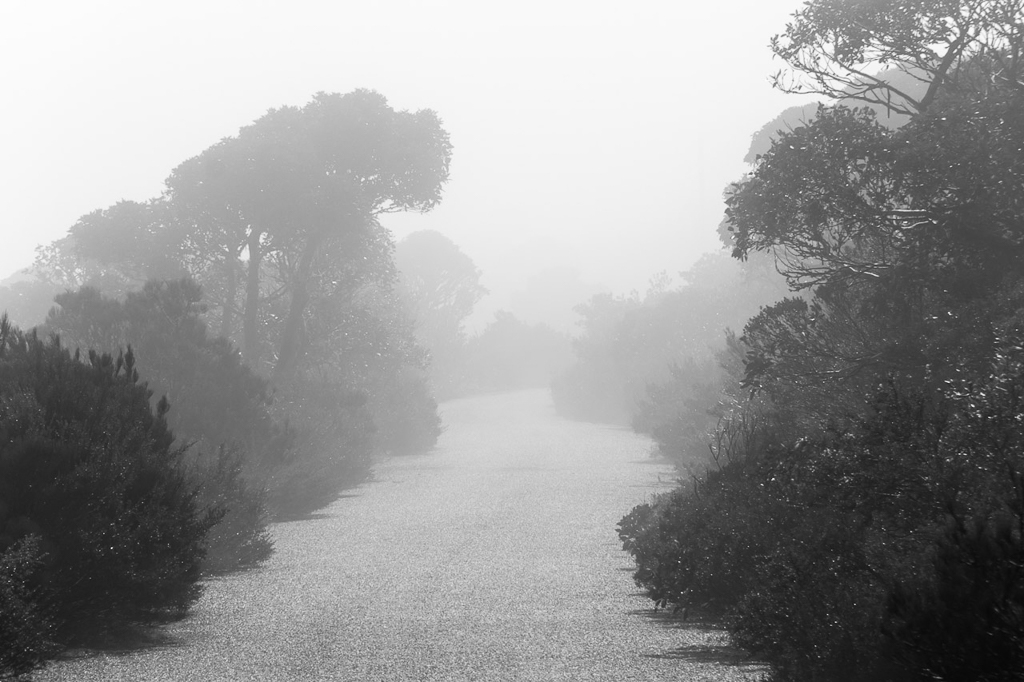 A road closed to traffic creates a comfortable climb, but it wasn’t getting any clearer. I had a dodgy theory that the higher we climbed, the better the conditions. Just like an aircraft at 10,000 metres above the cloud layer. What surprised me though was that my theory was flawed somewhere, as it actually became slightly worse and to top it off, rain started falling. The almighty transmission towers were closer now, so the summit was in sight. 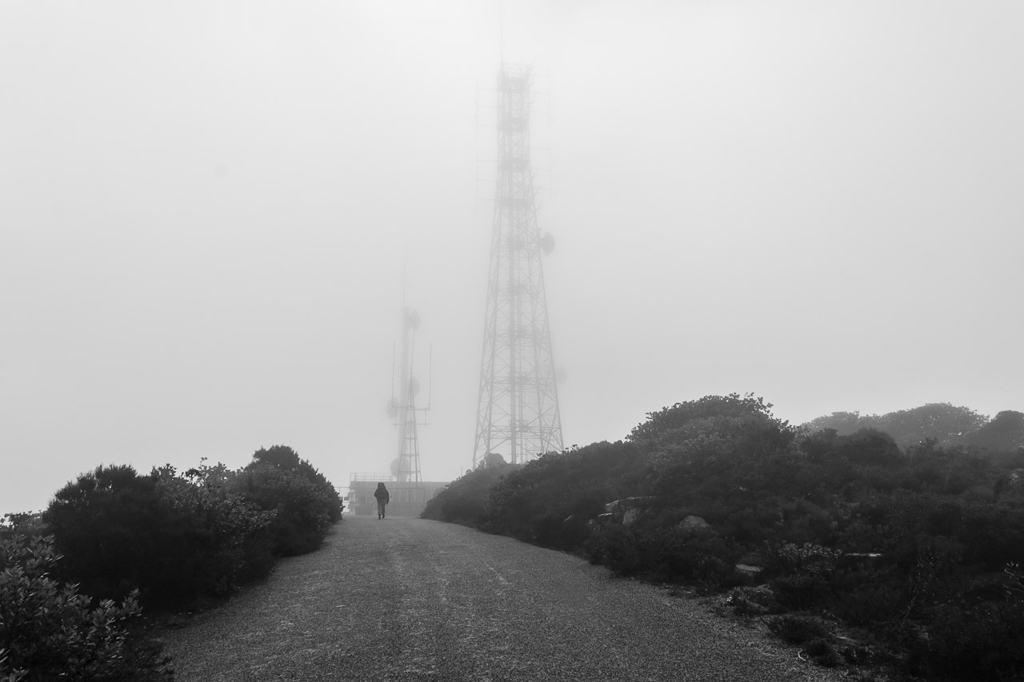 Well, we reached it and stood near the humming towers and concluded that we couldn’t see a thing. Whilst I’m writing about theories, here’s another one. If I can’t see anything from a summit, then why bother climbing it? If I’m going to put the effort in, I’d rather have a view, so I’m happy to come back on a clear day, as I’m sure the hill isn’t going anywhere too soon.

So, whilst pondering in the mist, it started to rain. Not the casual drizzle, or passing shower, but solid rain. It was time to find a comfortable rock under the bushes and contemplate what we were going to do. 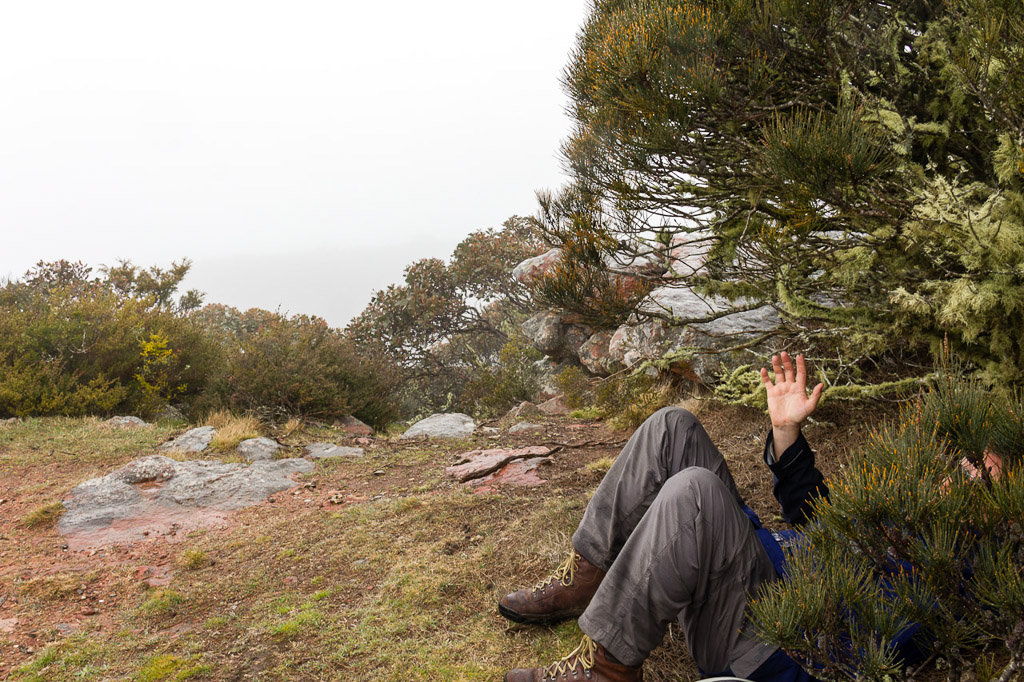 We looked at the route ahead to see if the plateau looked any clearer, but there was the slight problem that we couldn’t see it. Solution? We both uttered that famous Latin phrase, ‘venimus nos vidimus traditit’ and elected to drop the packs and get beer instead.

So, whilst Lady Smuffin cursed the fact she’d just put her feet up at the caravan and was looking forward to two days without us, we were on the phone again asking to be picked up. I’m sure she didn’t mind?

It was time to head back down that misty road. 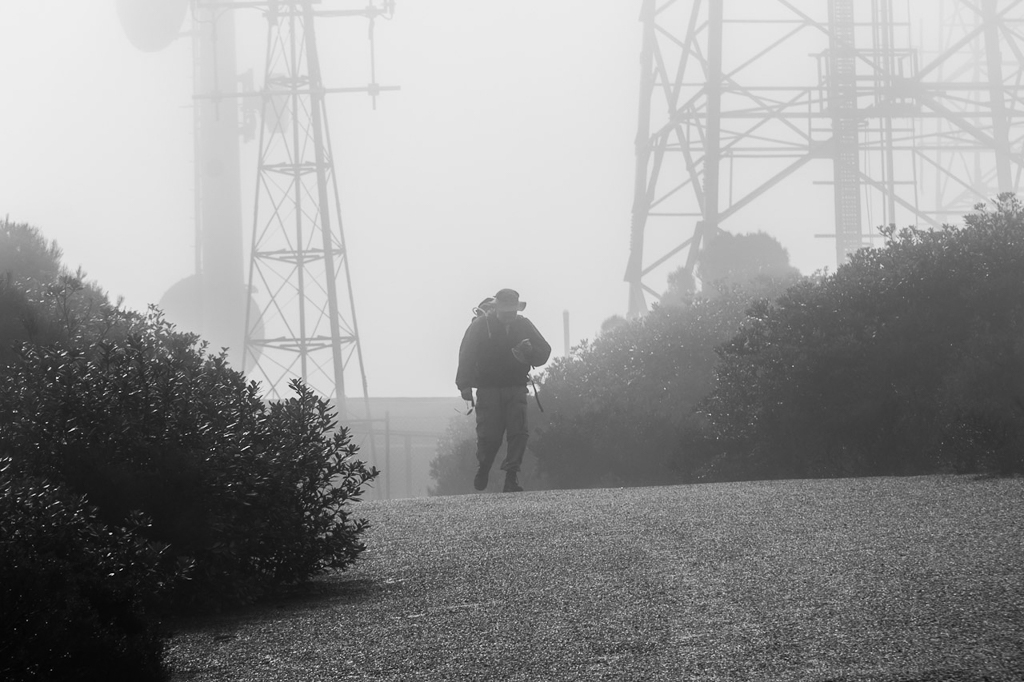 Whilst doing so, we came across a rather odd sight. Standing in a group off the road in the pouring rain, were a group of people with their hands held, eyes closed, uttering, “Hummmmm….Hummmmmm…..” in loud voices. I was cursing I didn’t have a couple of halibut with me, just so I could walk up slapping them above my head whilst humming as well.

Actually, what’s the protocol of those group humming things? Can one just jump into the middle and join in or do you have to be a member? Shouldn’t they be on top of mountains, rather than half-way up? If not on top, then wouldn’t it be easier doing it under a roof somewhere, out of the rain? Preferably near some beer and nibbles for refreshments, as I’m sure that humming would make one quite parched? By the way, these are all important questions. Anyway, we continued on, leaving both humming towers and soaking wet people behind.

Oh yeah, before getting collected by Lady Smuffin, I should include the ‘Hiking Fiasco cliché’ which is a photo of some vegetation with water droplets on it. I just know you were dying to see this. 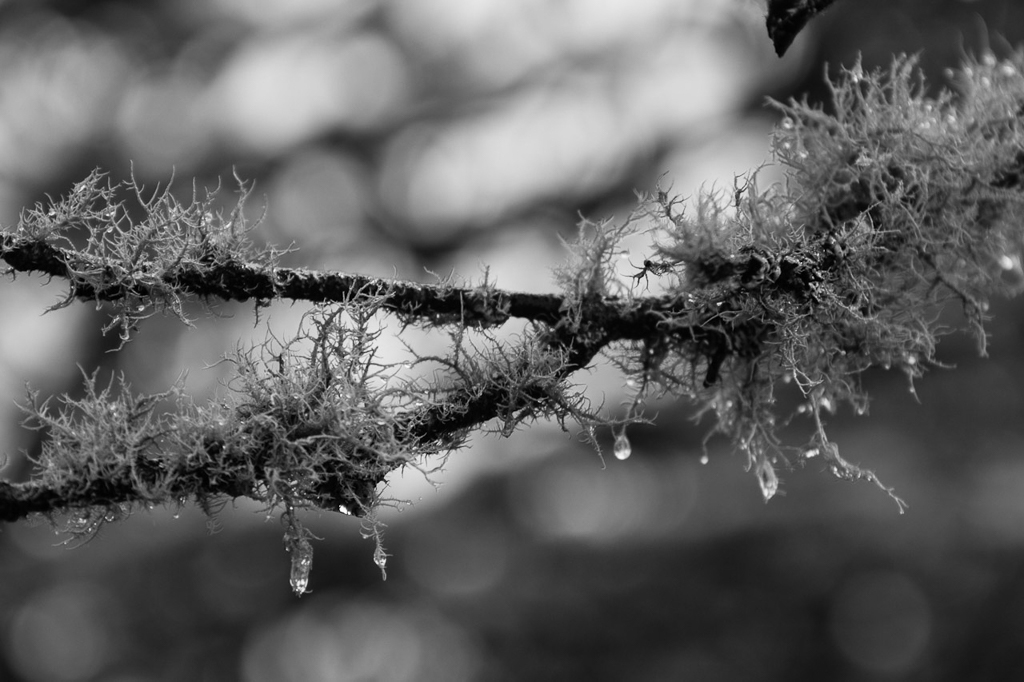 So, back into the car, a short drive and before we knew it we had these in our hands. 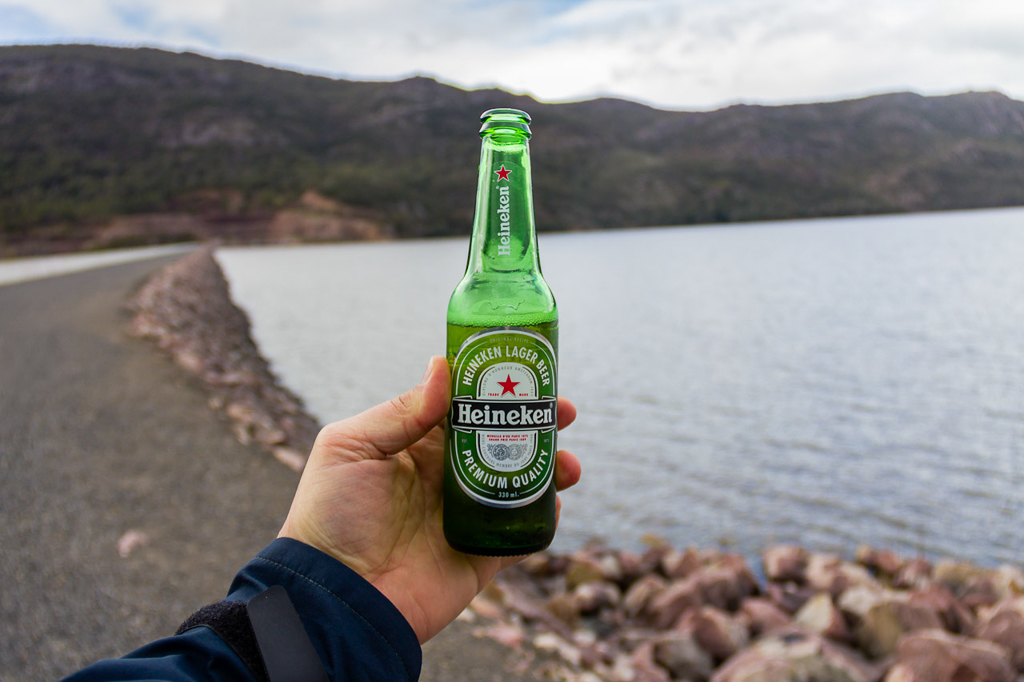 This really wasn’t the hike I was expecting, but as I said earlier, I’m sure Mount William is still there for another visit some day when there’s an actual view.

So, that’s the post and it’s refreshingly short. Now, it was time to sit back in Smuffin HQ and check out those fearless birds again. 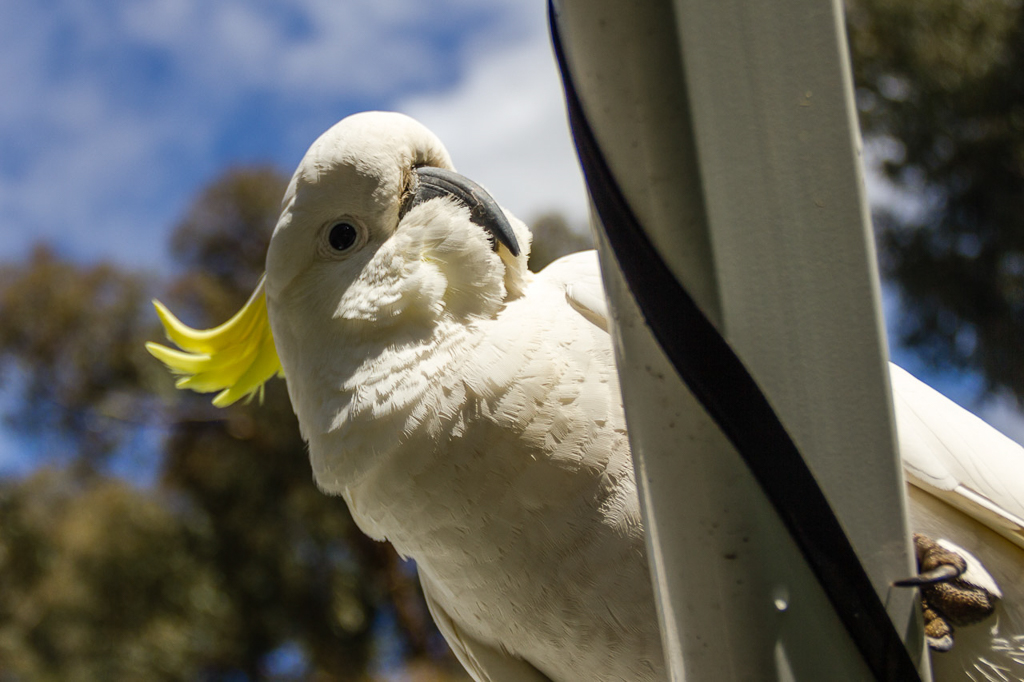 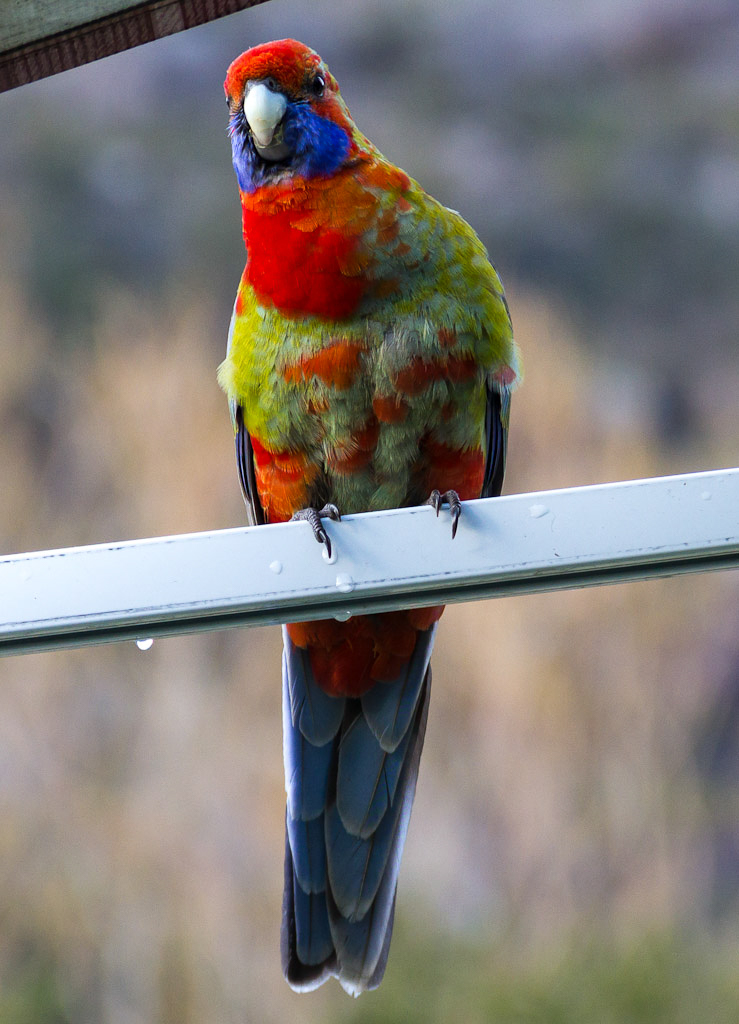 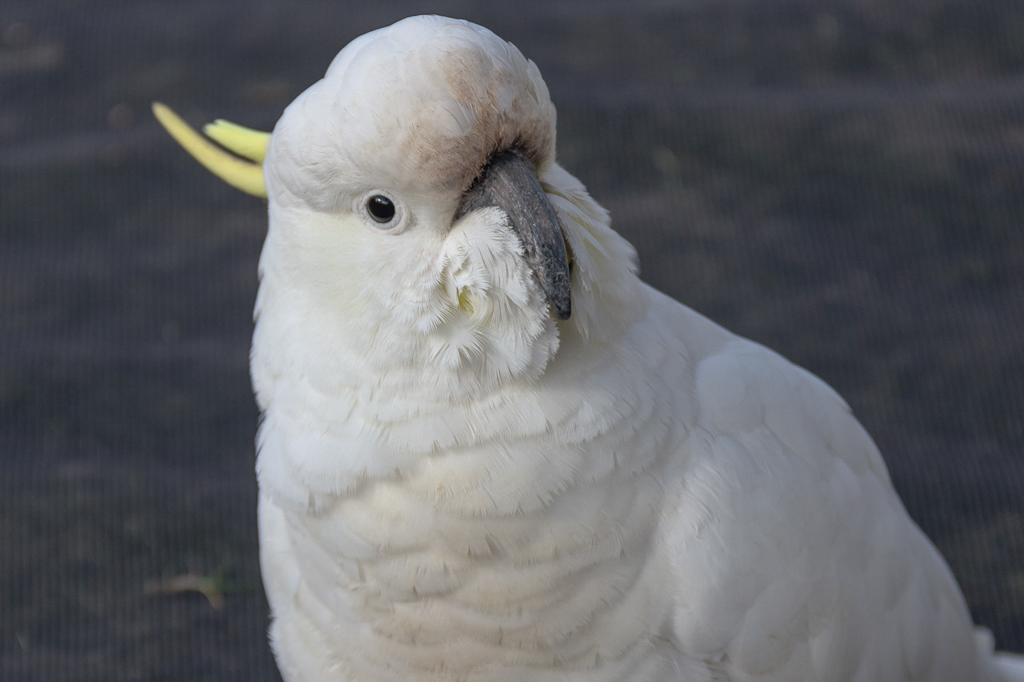 There is one last thing. Do you remember my Briggs Bluff post a few months back? When I returned to my car and found that some sort of animal had somehow gotten in and eaten any object it could find? Well, the mystery was solved when I was cleaning out the car boot one day. There’s a vent above the rear wheel arch and I found this. 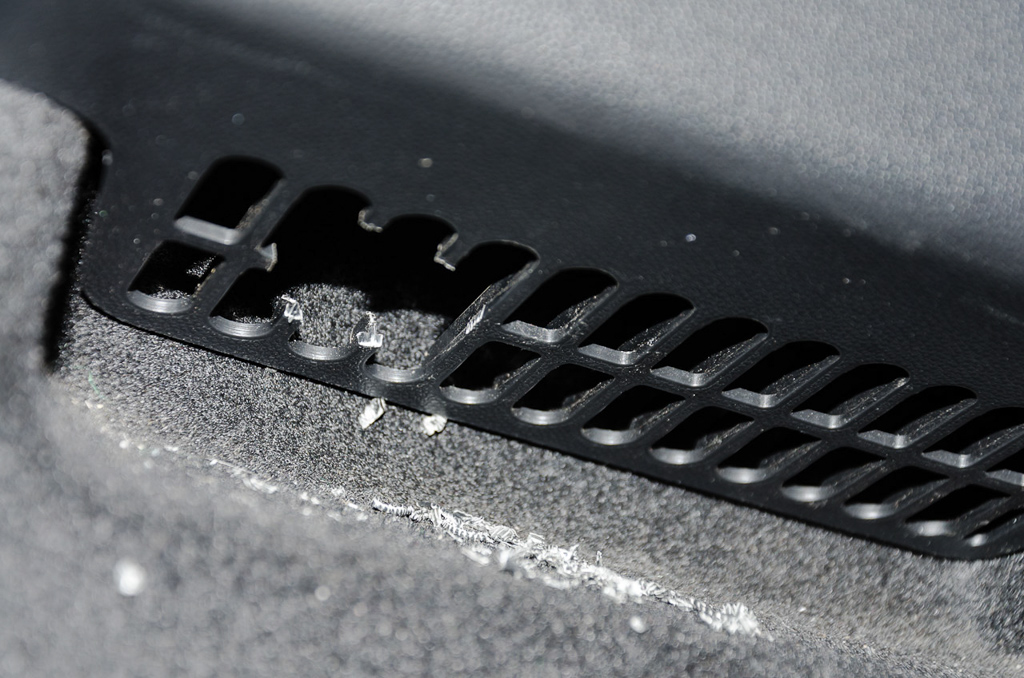 How did it get in? Well, whatever it was ate its way into the car! I was wondering what opening linked the outside to the interior. Well, none really, so the mystery was solved. When I go to sell the car and someone asks, “What’s that hole in the vent?” I guess I’ll just have to answer, “Oh that. It was just some rats who ate their way in. It happens all the time.”

Next up? How about the Great South West Walk again? I just know you’re on tenterhooks awaiting the next instalment of that trip…