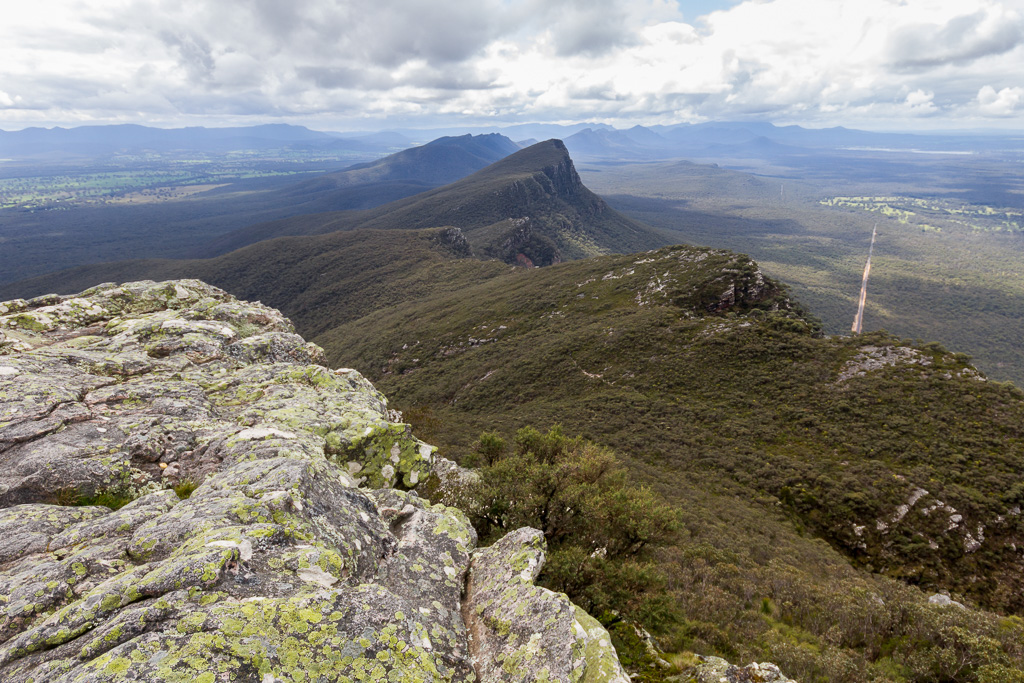 How about another visit to the Grampians? How about a shorter post for a change? Okay, this entry will give you the combo.

Firstly, this was an off-the-cuff walk I did on my own after a planned hike with Smuffin went pear-shaped the previous day. I’ll get around to that post later, but it can be summed up as, “We came, we saw, we gave up”. So, after the previous days fiasco I decided to stop on my way home to slip up the 827m, Mount Abrupt.

Mind you, this isn’t a hike at all really. My trusty map states it’s a two to three hour return walk. Is that it? When I read this the day before, I told Smuffin I’d be up and back within two hours. Now, are they famous last words…?

I arrived at a small car park at the bottom of the mountain in the late morning. There were a few cars about, so for the first time in ages I figured I’d actually have to share a walk with someone else. It was about 11 o’clock and I contemplated not even taking a pack. Just zip up, a few pictures and come back. Good plan? I’m a panic merchant though, so I ended up taking the pack with three litres of water. There’s no way in a hundred years I’d ever go dry with the amount of water I take on every walk.

Oh yeah, one more thing. Mount Abrupt, Grampians National Park is a bit of a weird one, as I couldn’t remotely see the top of the mountain from the car park beneath it. In fact the most prominent feature of the entire walk is the neighbouring 780m Signal Peak. So, you’ll see more pictures of that than the mountain I was actually climbing!

So, I was off and racing strolling. This particular walk was smashed by flooding rain in January 2011 which caused extensive landslips and was closed as a result. Parts of the path were rebuilt, so I was interested to see how the landscape now looked. I noted a new sign at the start hadn’t lasted long before been attacked. Mm… I wonder what words were used that drove some pumpkin-head to assault it in a scratching rage? Can you possibly guess? 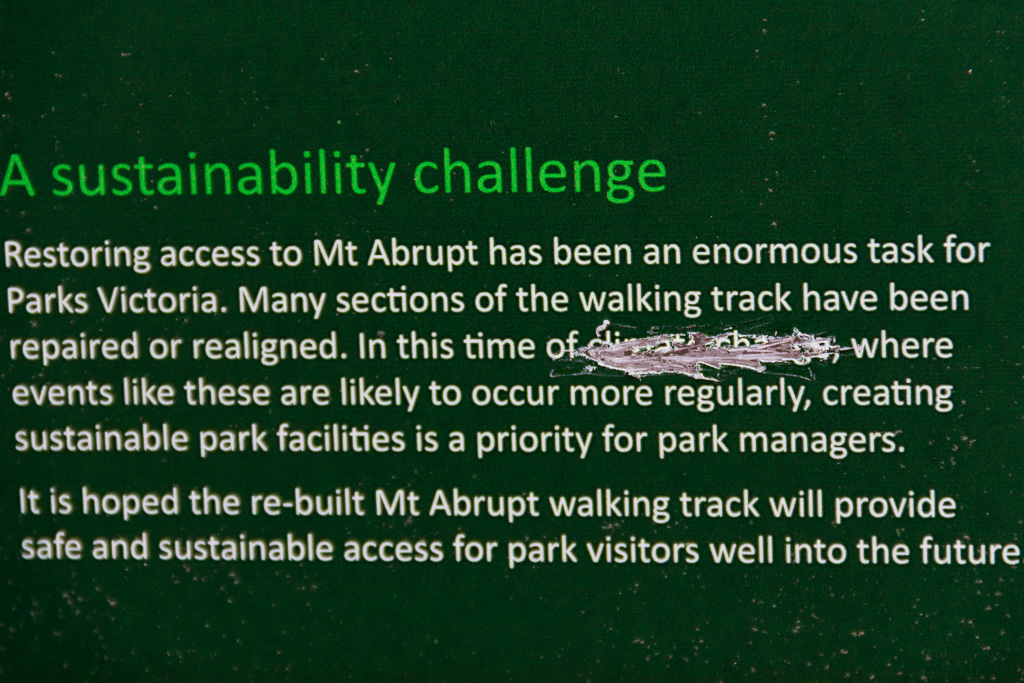 Egads! Those infernal scientists and their peer-reviewed literature! You know what? I’m pretty confident about this, so I’ll bet my left nut the sign was defaced by a middle aged white bloke. You know, the sort of bloke who can’t satisfy his wife, so he has to give the rest of us a hard time?

Anyway, the track was rising, but nice and comfortable with the ubiquitous grass trees along the way.

It didn’t take long before reaching the sections where the path had been rebuilt. Actually, it was hard to capture in photos, but an enormous part of the hillside was gone in a massive landslip leaving flattened trees in its wake. The mind boggles as to what it sounded like at the time when it let go… 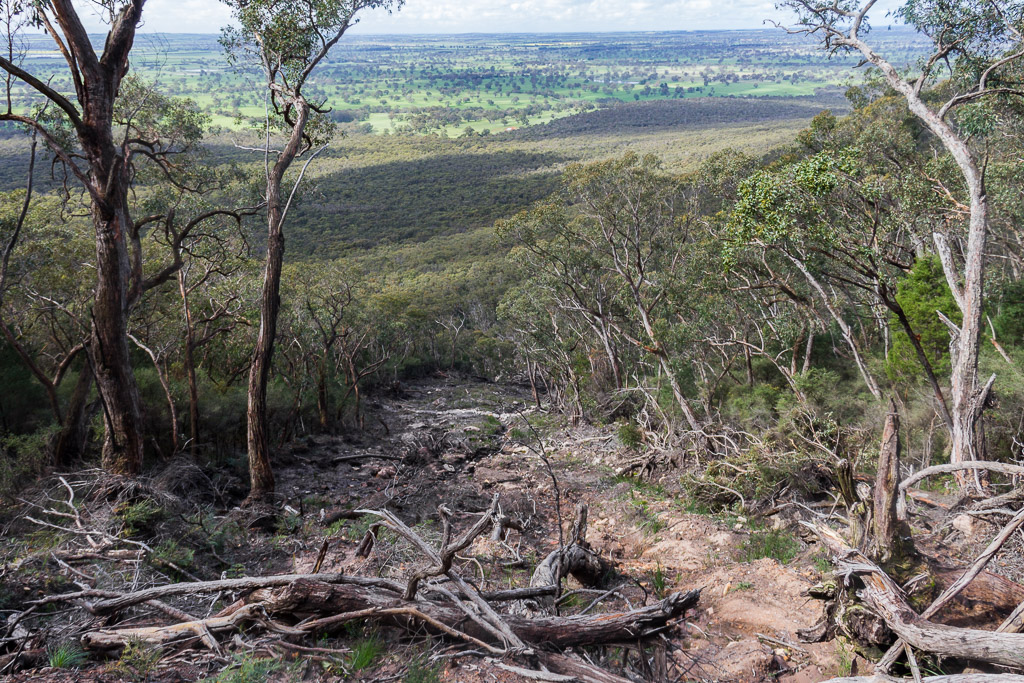 …and it left some trees snapped liked twigs.

I continued wandering and if you’re ever contemplating doing this walk then I suggest you take particular interest in the next three pictures. See this nice rock wall with a well-worn track beneath the base…? 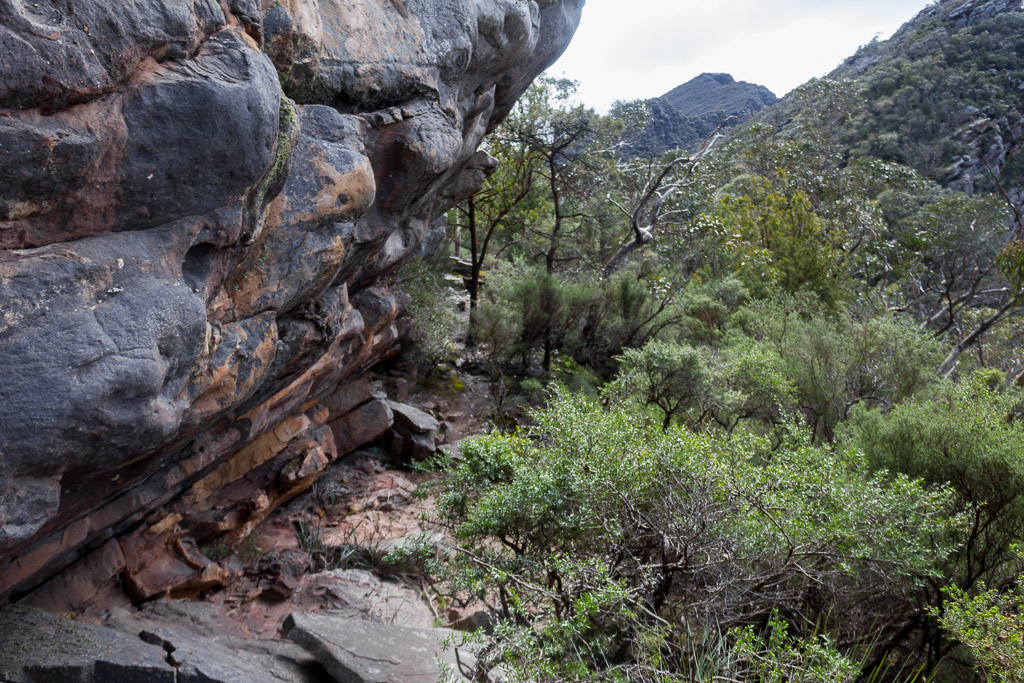 How about this branch with a nice view beyond? 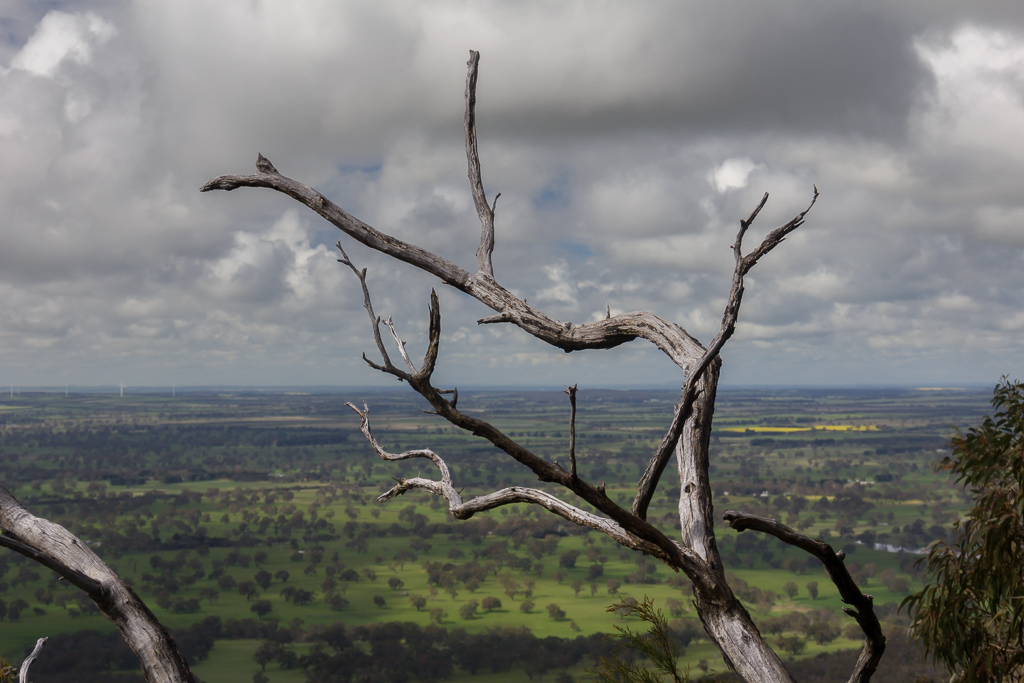 How about that rock wall again…? 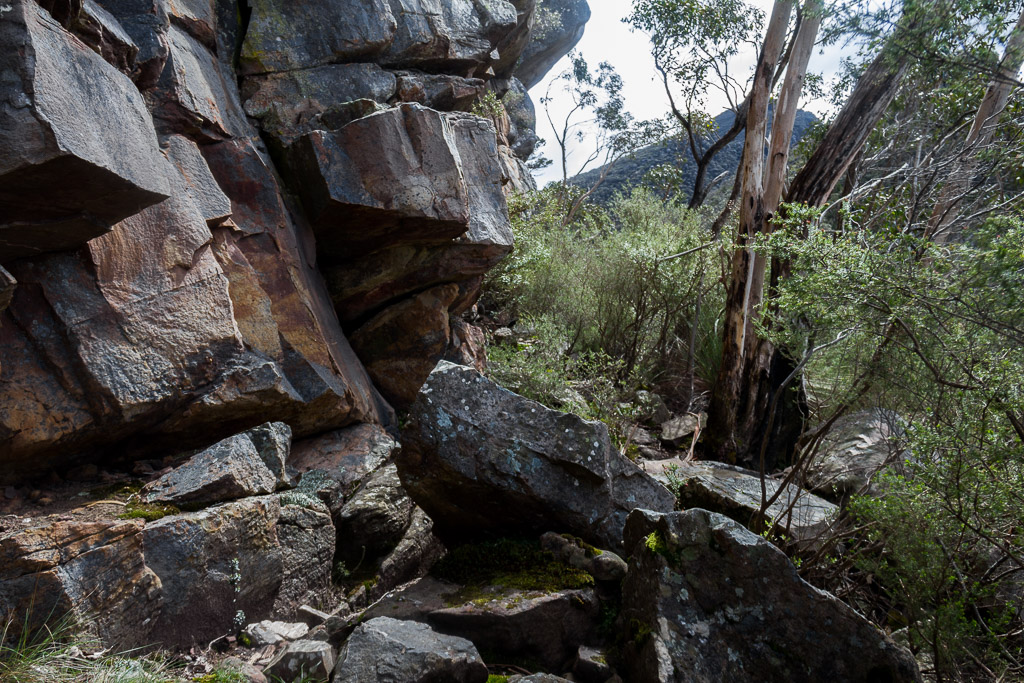 What am I on about? Essentially, there’s only one thing that’s happened if you see any of these sights. You’re lost. Huh?

Well, there I was, happily strolling along humming ‘Killed by Death’ by Motörhead (those bloody random umlauts!) when the path started to ‘thicken’ up a bit. This continued for a little bit until I knew it was time to stop, as it appeared the track was more animal than human. Mm… I was feeling quite impressed  I’d broken new ground in the fiasco stakes, having got myself lost on a well-made path to the summit. I guess I wasn’t really ‘lost’, as I knew I was in Victoria. Anyway, I cranked out both the map and GPS to work out what had actually happened.

I was certain the actual track was nearby, but as I was hunched over the paperwork in head scratching bemusement, I heard shouting below me from the bush somewhere. At this stage I couldn’t see anyone other than a lonesome voice, so the best I could muster as a reply was “Klaatu barada nikto!!” There was a bit of tree shaking and branch snapping, before a fellow wanderer appeared heading towards me who was also lost on this comfortable stroll in the Grampians.

The best thing about being lost is meeting someone else, with the theory the other person knows where to go. The only trouble in this instance was we both didn’t have a clue. There was definitely an old track there, so I wonder if we were on a long disused track to Signal Peak instead? Anyway, I roughly knew the direction of travel, as that concept was simple. Up. I ran with an idea that if I continued to walk uphill until I reached a point where the ‘up’ stopped, I’d have made the summit. Right?

So, I found some sort of scratching which headed uphill and decided to potter around and hopefully find the correct track. My fellow wanderer decided to backtrack and I was left on my own again aimlessly looking at trees and rocks. I was getting nowhere when the voice returned saying, “I found the track. We missed the turn-off!” Oh dear.

We then strolled back, passing the cliff in the photos above until we came across quite an obvious track heading uphill. Well, sort of obvious, as this is one of the arrows pointing the way. 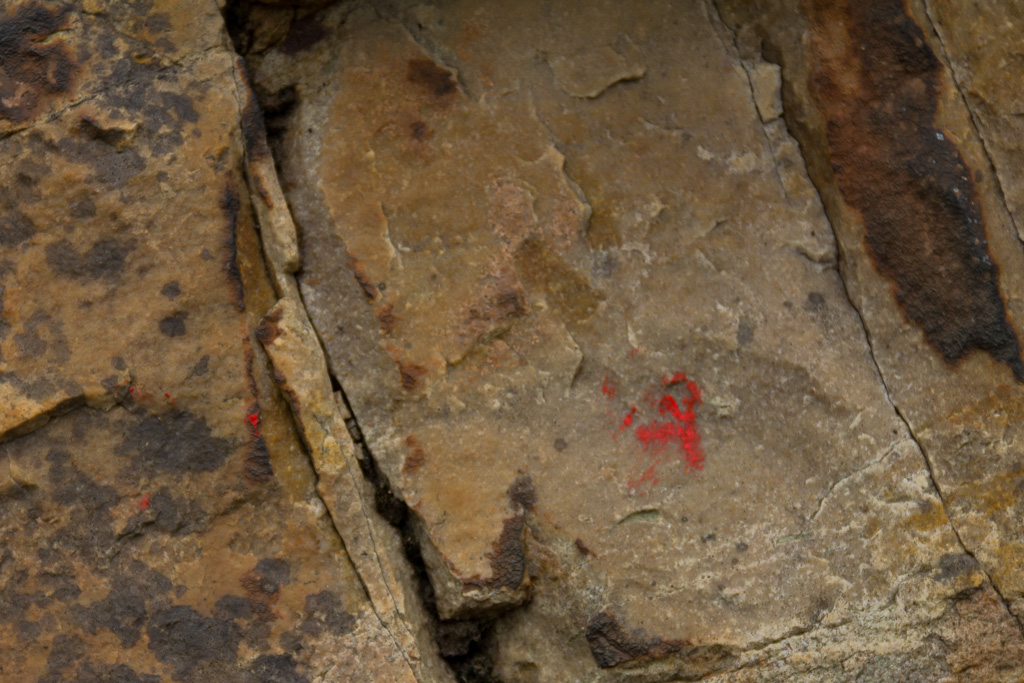 Yeah, okay, there was another one, which I guess was doing a better effort at its job of being an arrow. 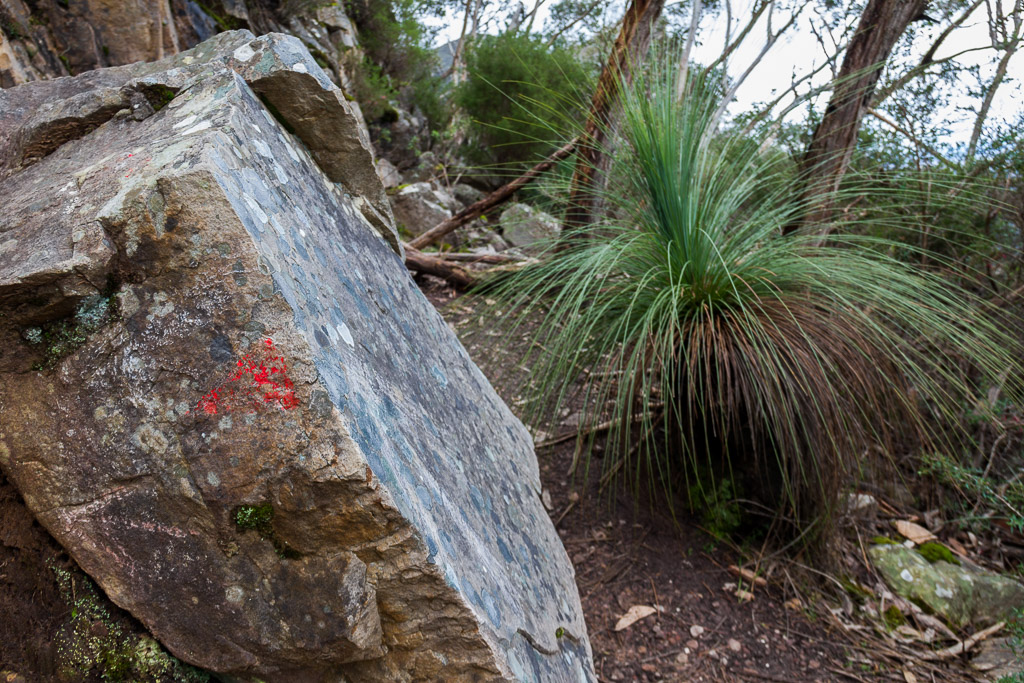 I’m not sure how I missed that on the rock, but there was a well-worn path past it, which shows quite a number of people have continued on like I did. I clearly had ‘path fever’ and didn’t really take in what was going on. Don’t forget though, someone else did the same thing at the same time! That made me feel better, but I must admit being distracted by the fact it was getting close to lunchtime, with the resulting craving for something artificial. Maybe something like this? 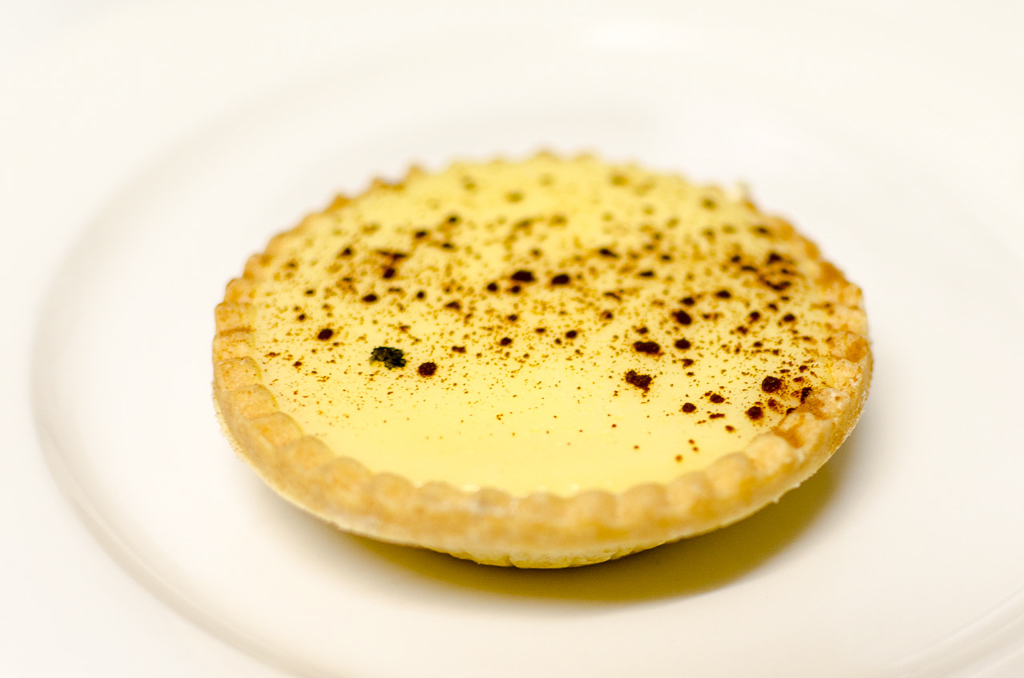 Anyway, things were now back on track and we set off for the summit. The trouble was my new walking companion was a lot fitter than me and I had to push myself into ‘stroke-mode’ to keep up. The track continued under the cover of vegetation… 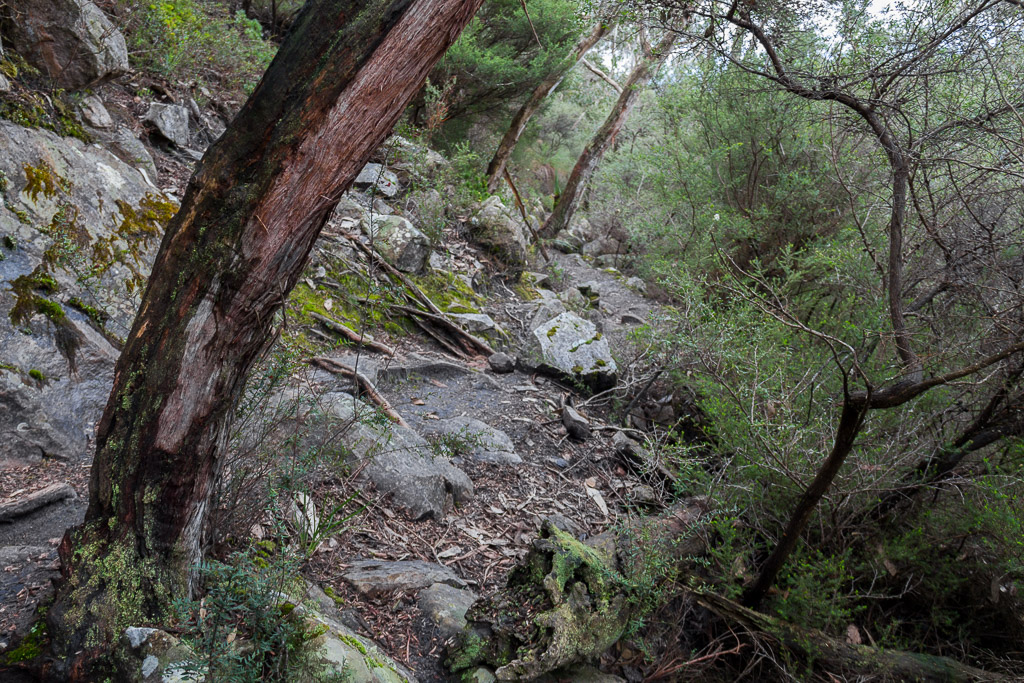 …until leaving the treeline and the views became more expansive. 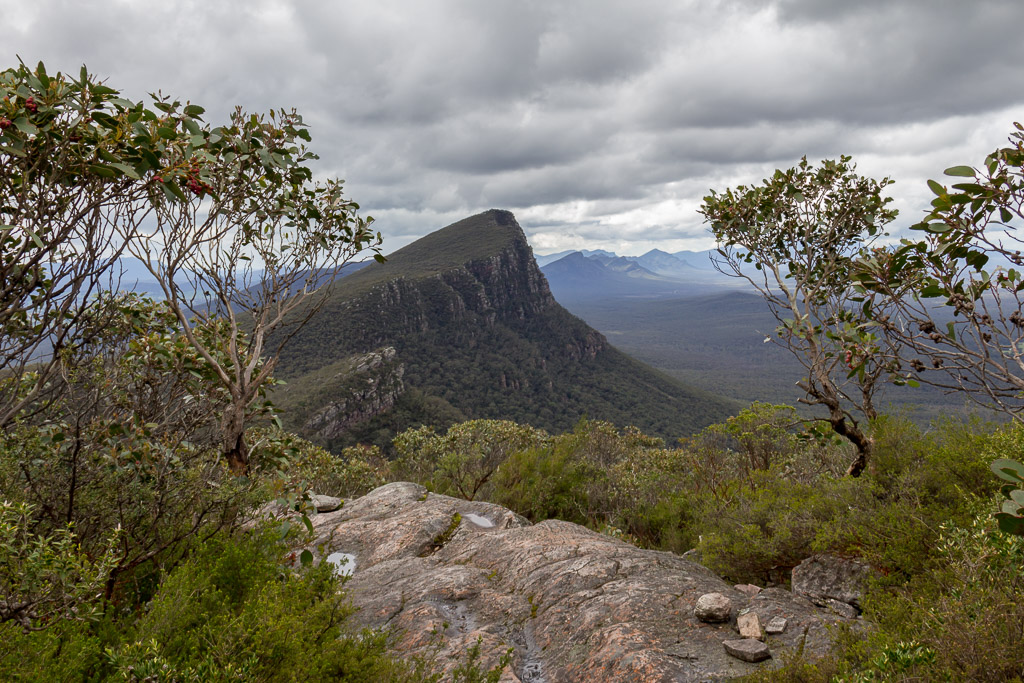 Oh yeah, it’s Spring as well, so flowers were starting to bloom. 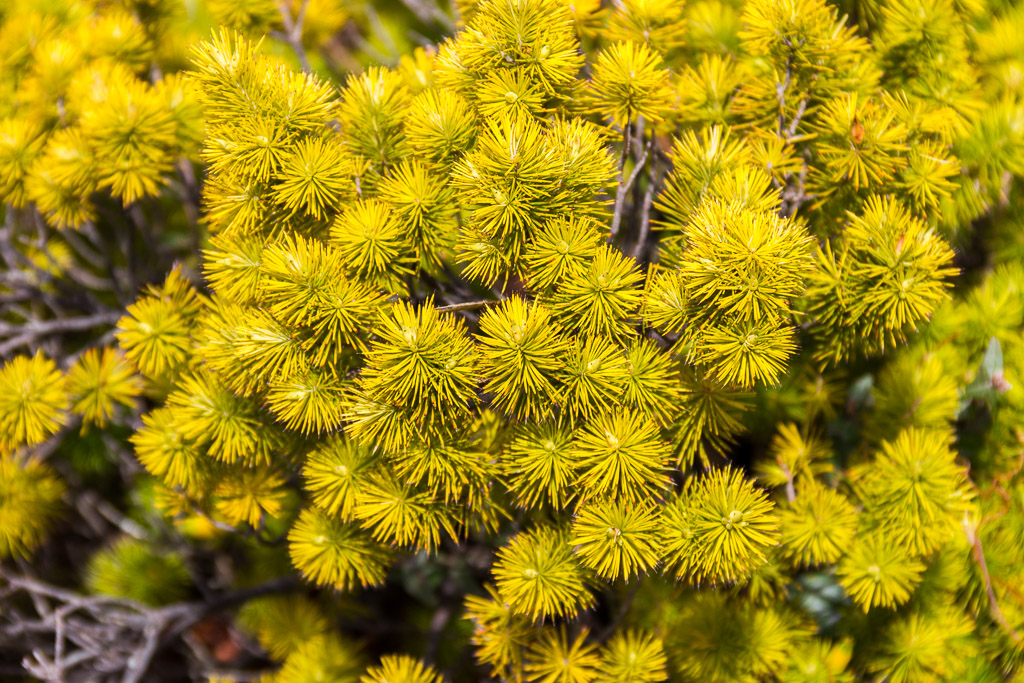 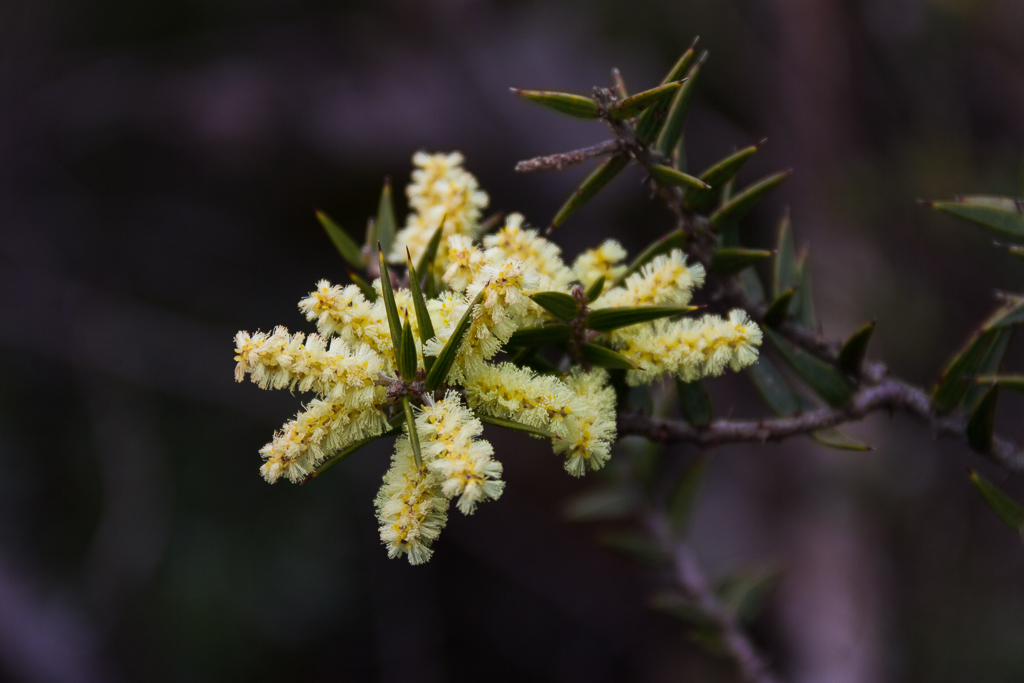 The trig point on Mount Abrupt summit was also in sight. 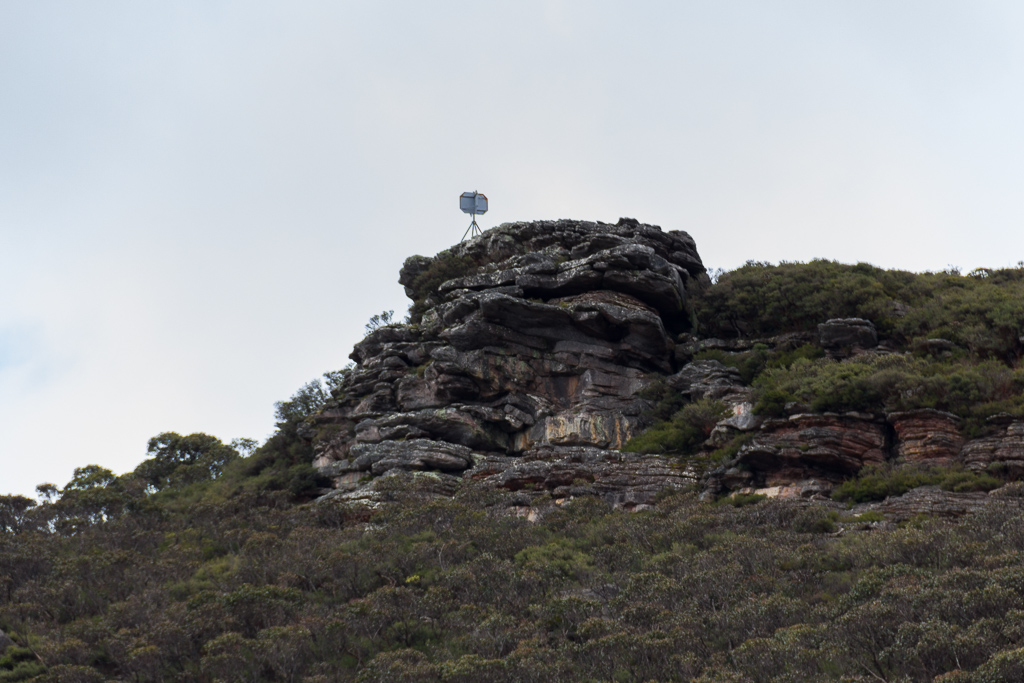 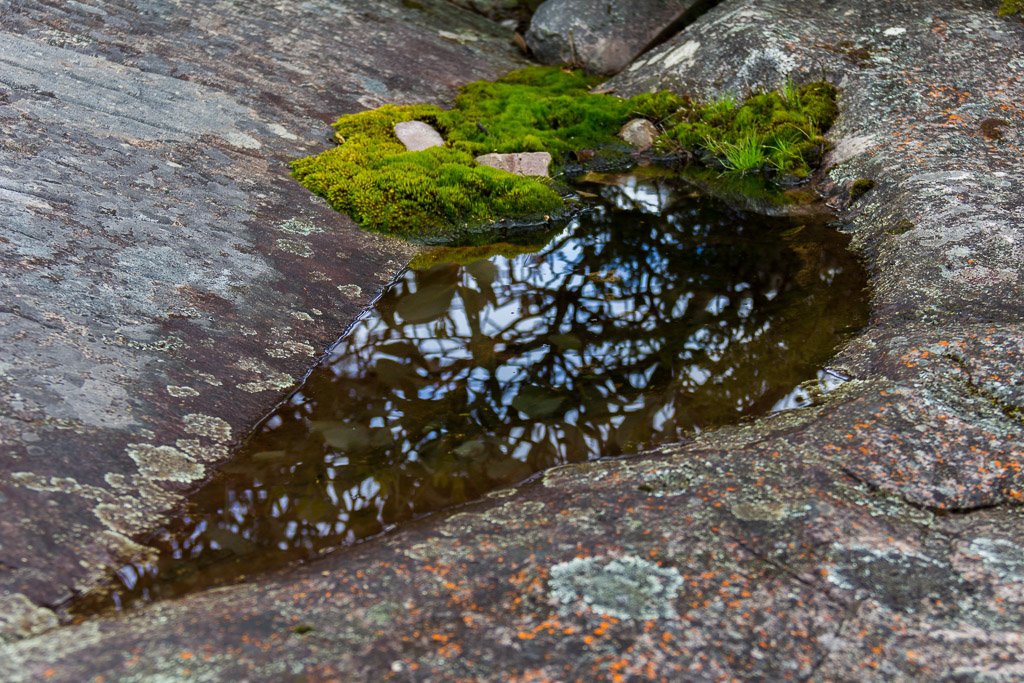 …until finally reaching the summit. Unfortunately, the sky was a little washed out, so the metal structure looks a little plain. That’s not a problem though is it? Oh yeah, one more thing, I guess I should have moved my backpack before taking the photo? Blast! 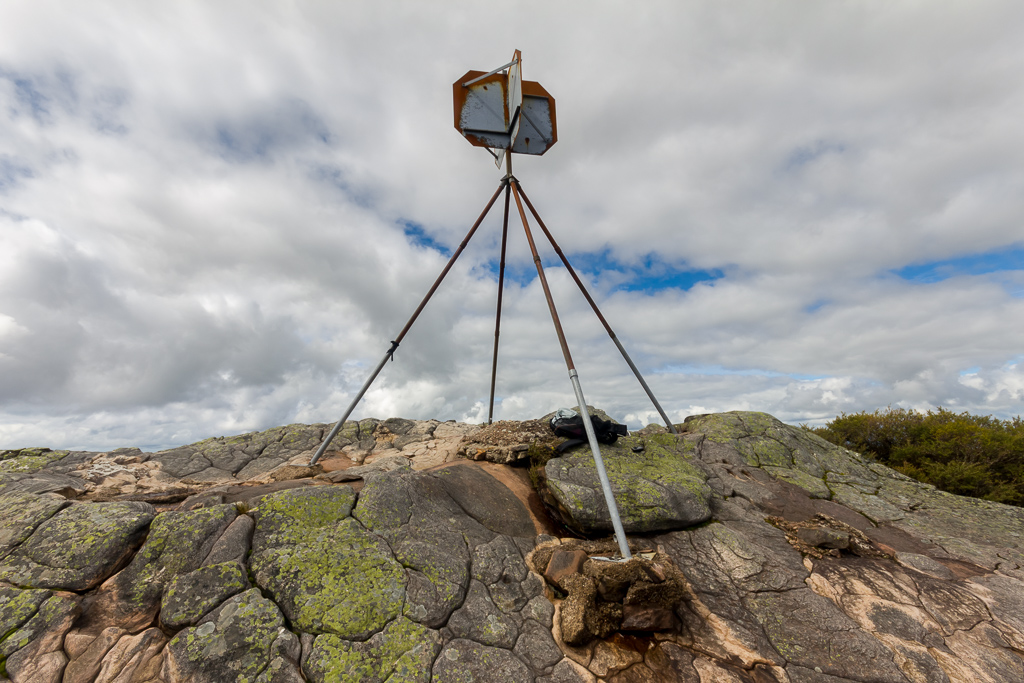 Signal Peak dominated the view, so it makes sense half of the photos I took are of it. 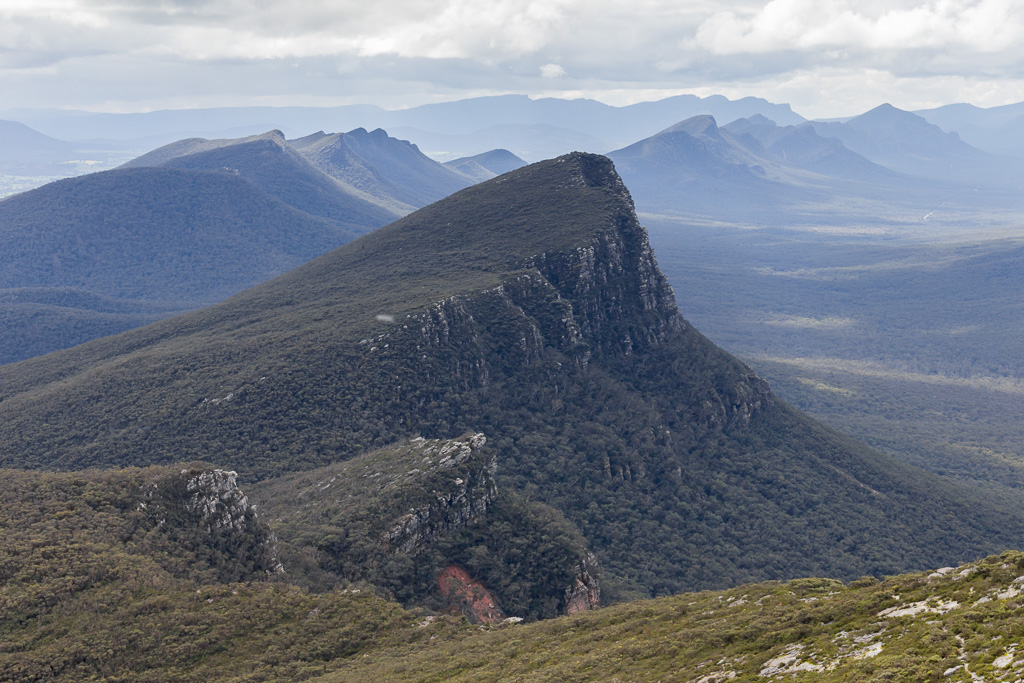 Phew. We’d made it! I tried to ignore the fact that of the five other people I saw that day, not one had taken the wrong turn. Oh well, that’s the way it goes. Remember the business about the quick walk to the top? Being done and on the way back before 12 o’clock? 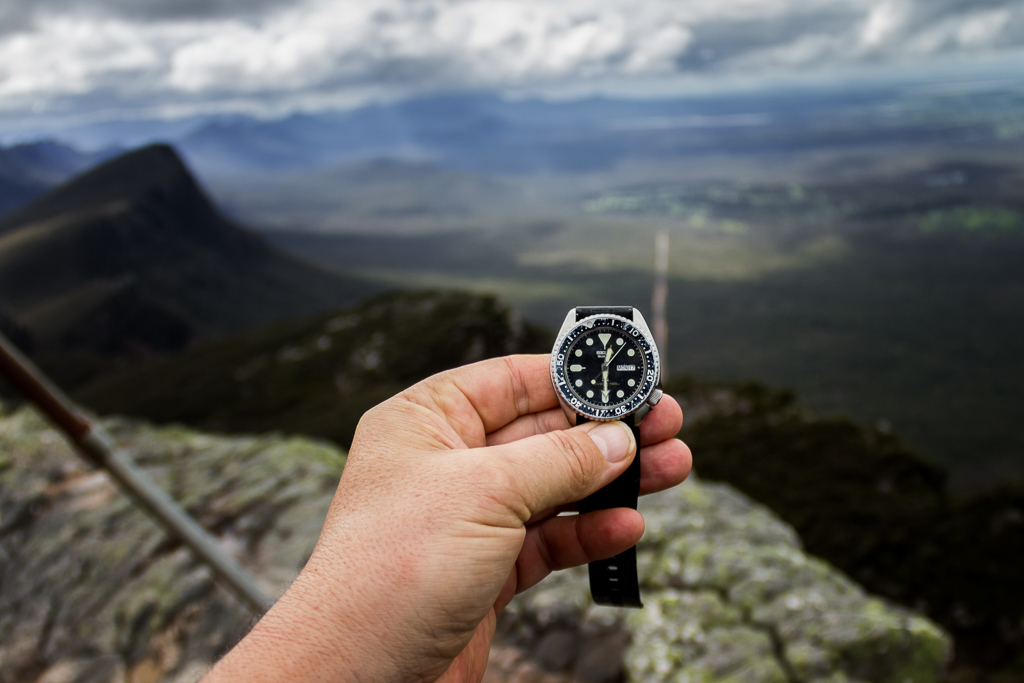 Yep, I went over the time a little. You may be wondering why I’m holding my watch instead of taking a picture of it on my wrist? Well, I’d switched lens and it refused to focus on my wrist as I couldn’t stretch it out far enough away from the camera. What I needed was arms like Gumby, but probably not his complexion though. 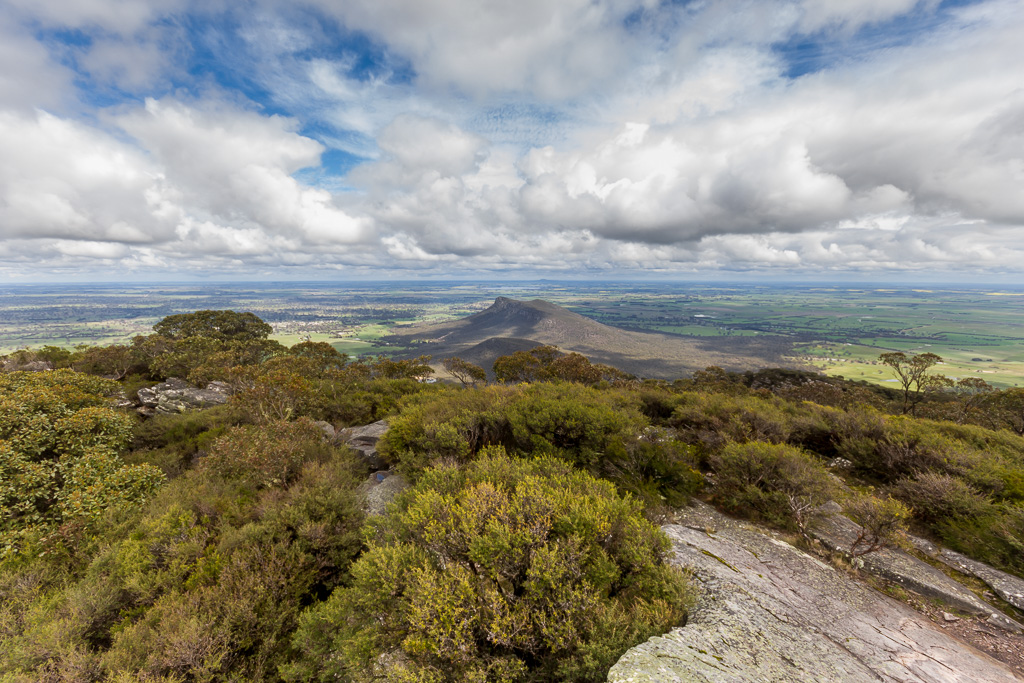 It was time to relax for a while as the views are fantastic from the top. There was a bit of water around from steady rain the day before which appears I’m hovering over. 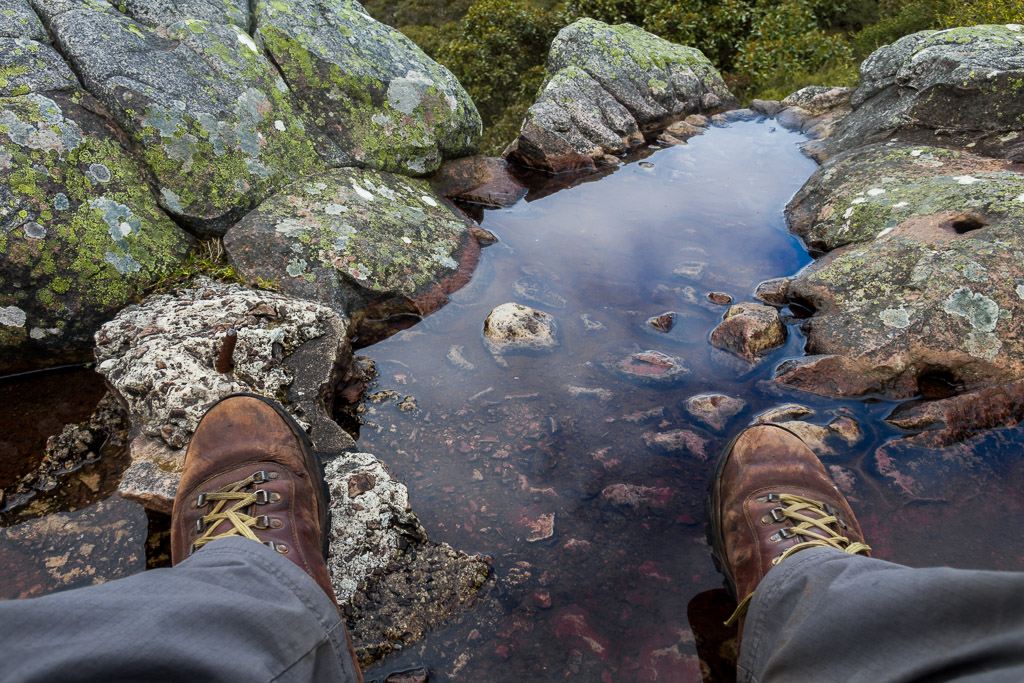 I spent quite some time on the summit and my lost companion had long gone. My starting point at the Grampians Tourist Road seemed a long way down. 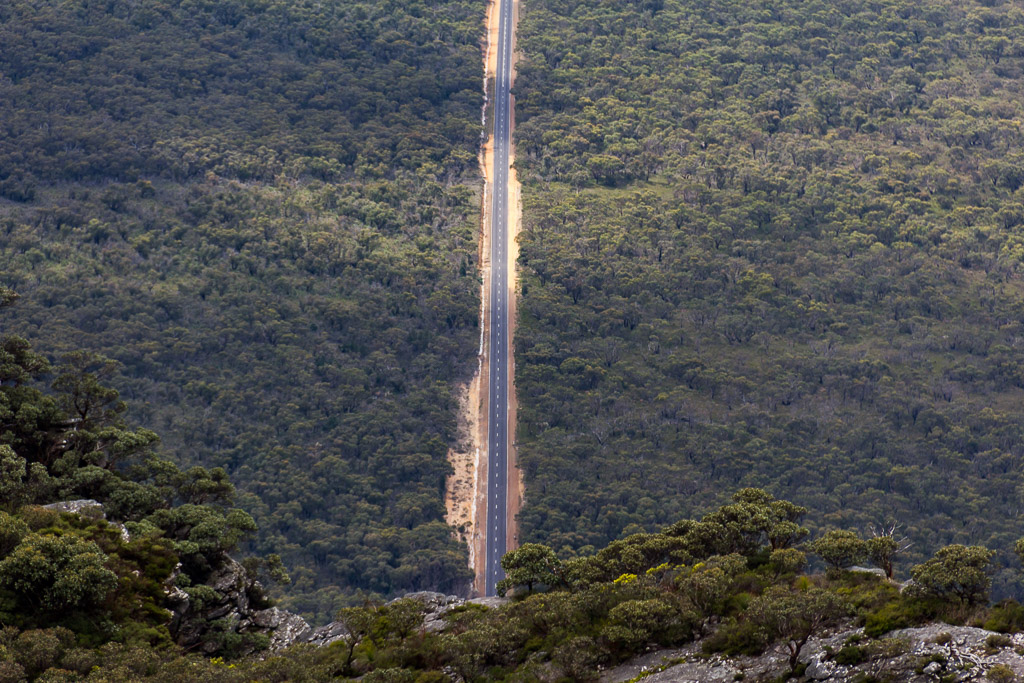 Finally I decided to head back and there were still some more sights to see that I’d missed in my ‘trying to keep up’ climbing rush earlier. I saw one particular rock near a cliff which I thought would be worth investigating for the possibility of a clear view. It was only when I stood on it and nearly crapped myself that I realised it was actually an overhang with nothing below it for a few hundred metres. 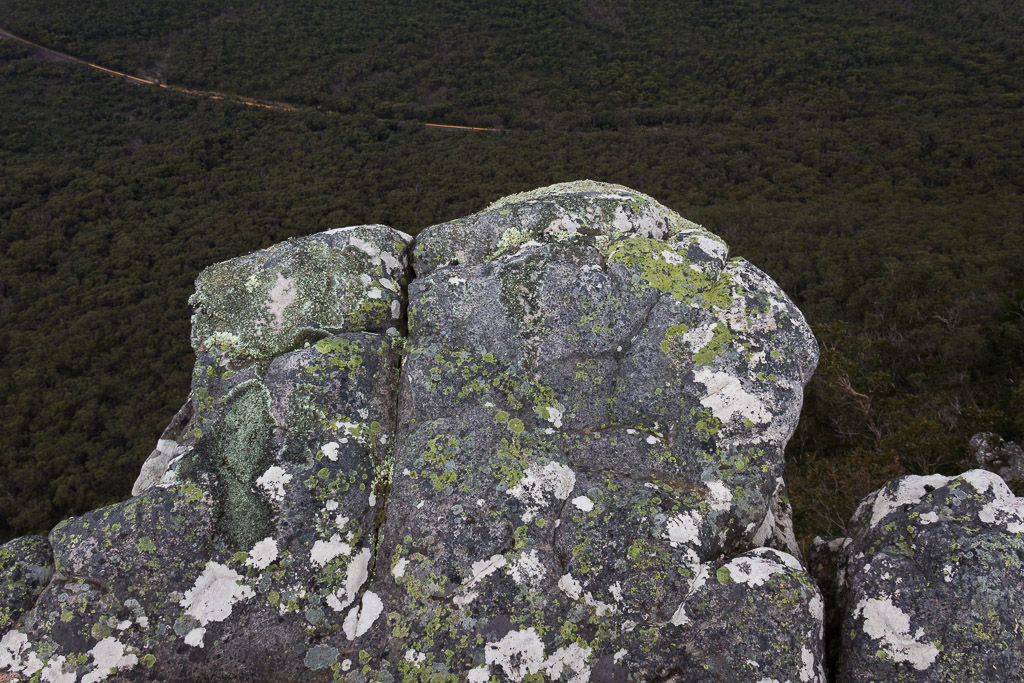 It’s fresh air under this rock

Even on the upper slopes the grass trees were in full swing. 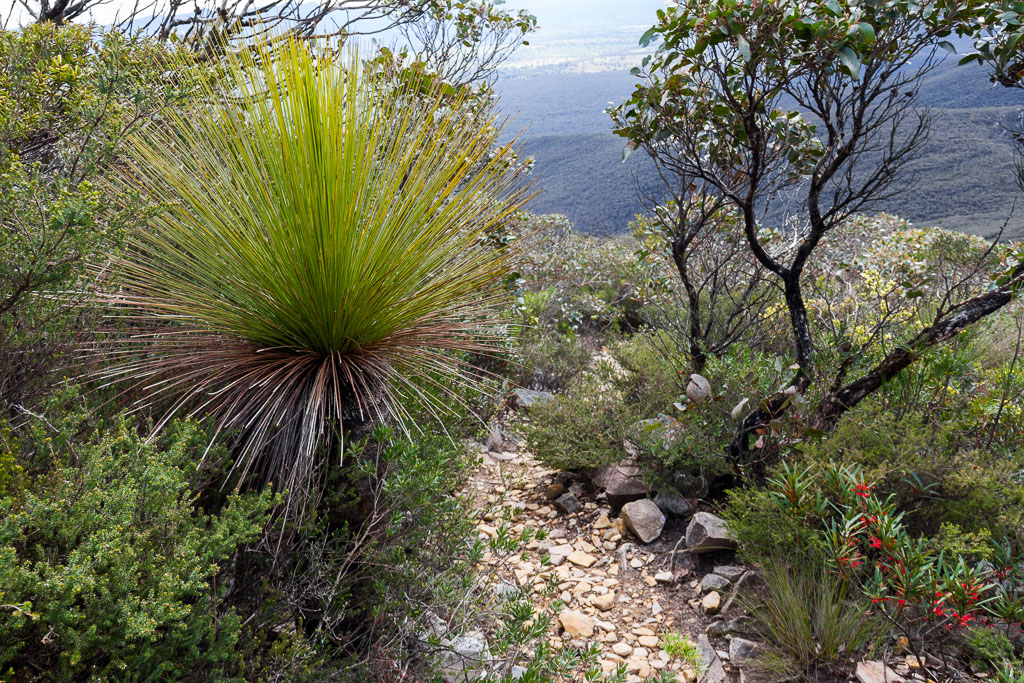 Oh yeah, the track on the descent faces Signal Peak, so I took even more pictures of it on the way down…

Are you sick of it yet?

A bit more wandering and I was passing the gouged hillside from the landslip again, including the warning sign of a bloke who’s showing a fair bit of leg-speed. 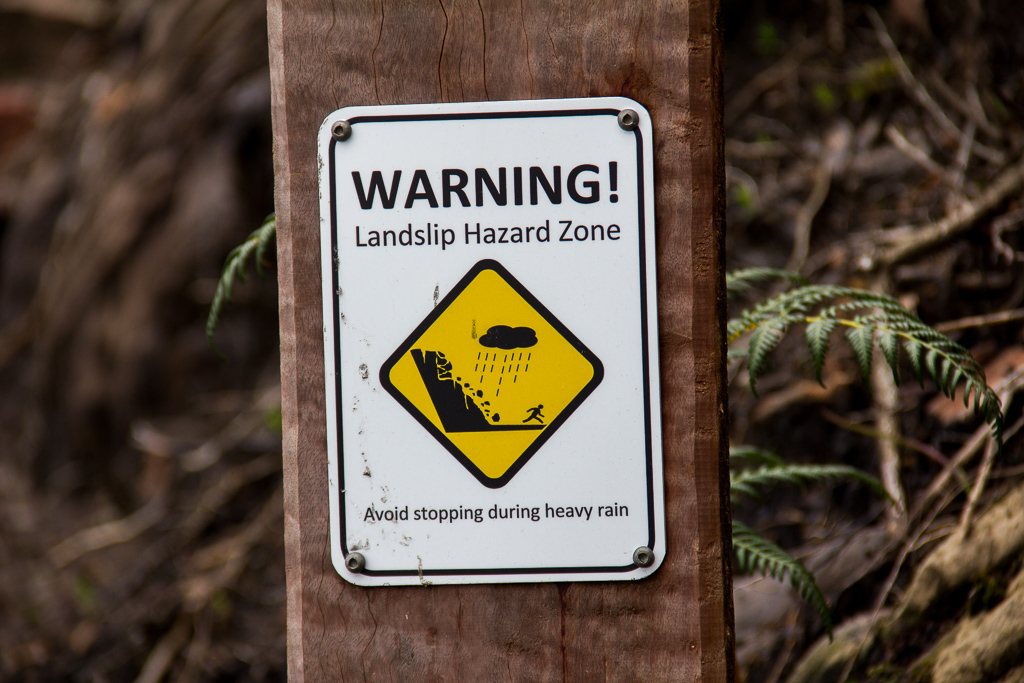 I weaved past the occasional tree trunk, leaning across the path… 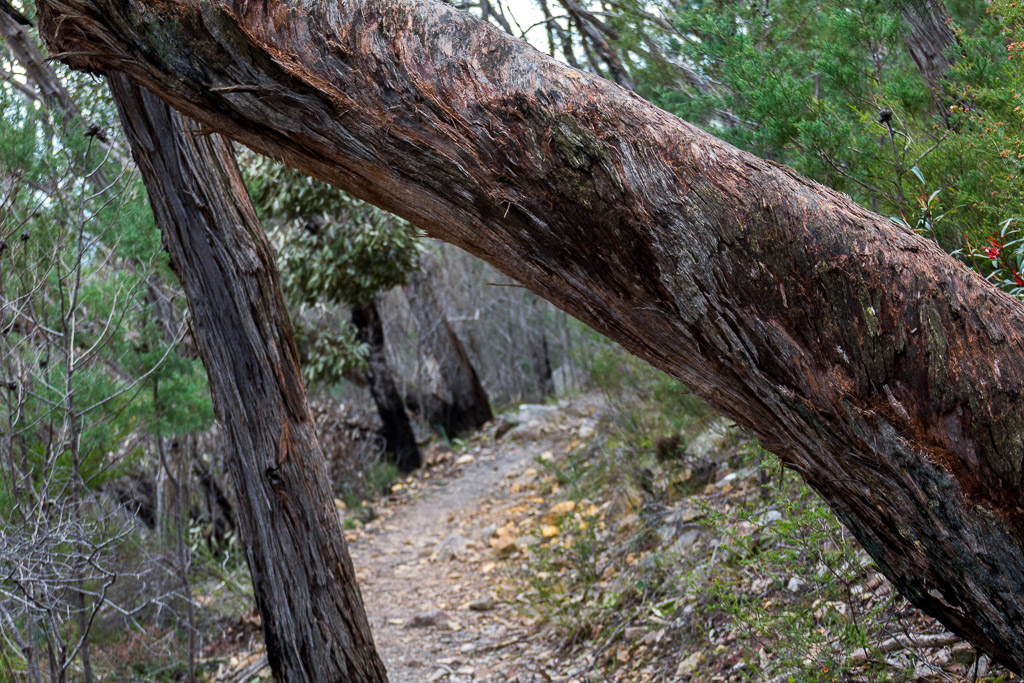 …and then before I knew it, I back to the start where all of the signs for the day started. I looked at this one and figured out why the bloke has fallen over. Really, it’s no wonder when you think about it, as he’s got no feet. 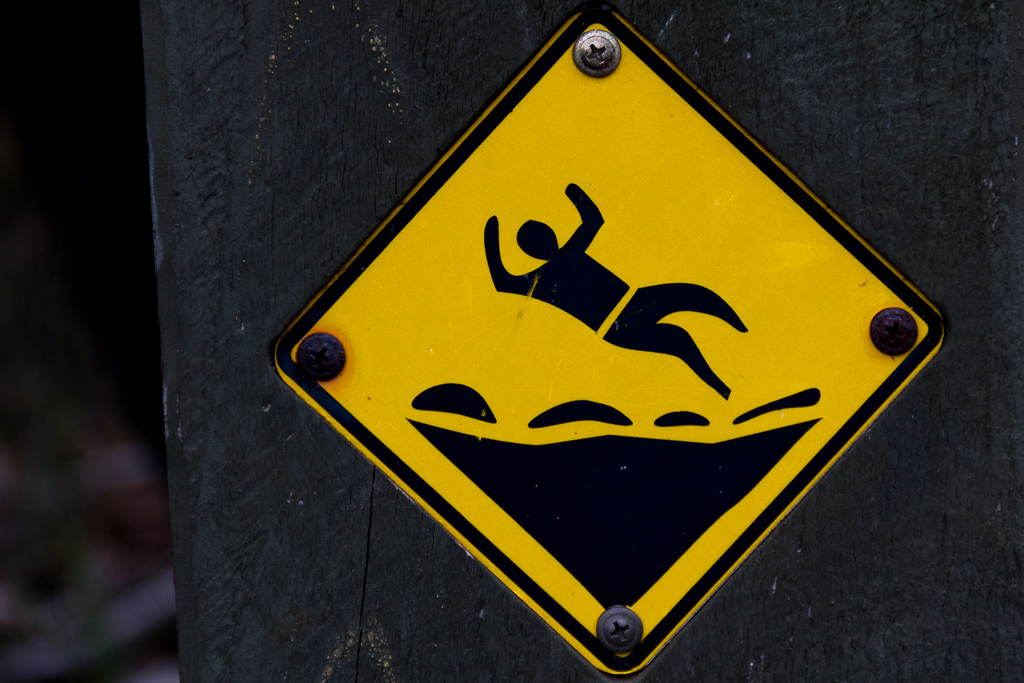 Finally I was back to the Grampians Tourist Road which had seemed so far away less than an hour ago.

Mm… What did the GPS tell me? Total time of 4 hours 17 minutes? Well, that was a little longer than I expected at the start. Really, this blog writes itself most of the time and if it was all smooth sailing I’d have nothing to talk about. All I can say is if you’re heading up that way, just remember there’s a hard left turn on the climb! 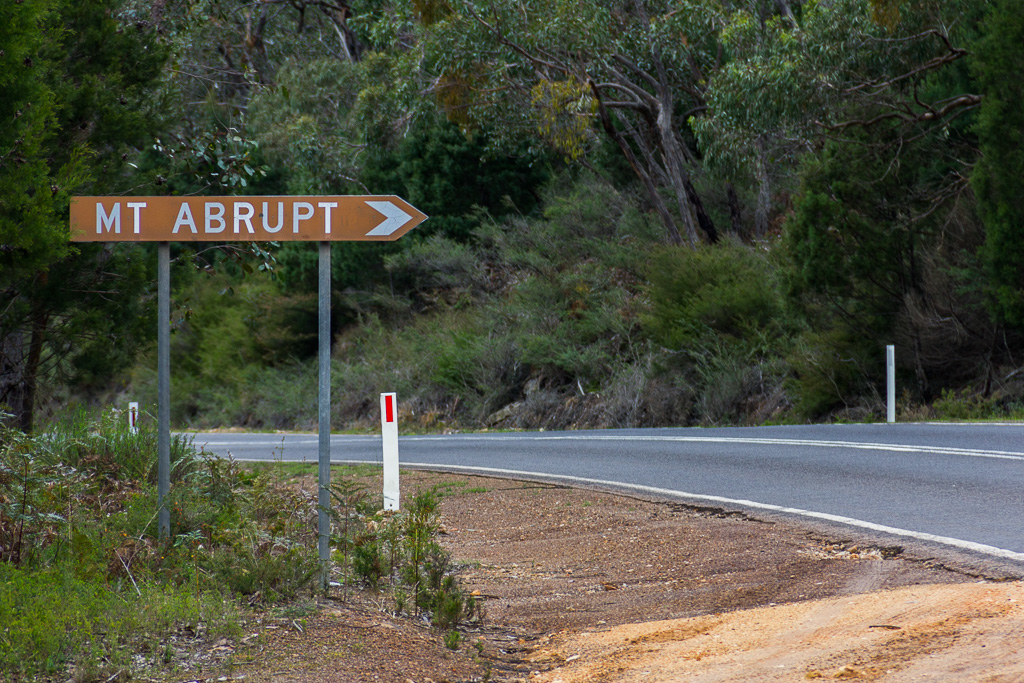