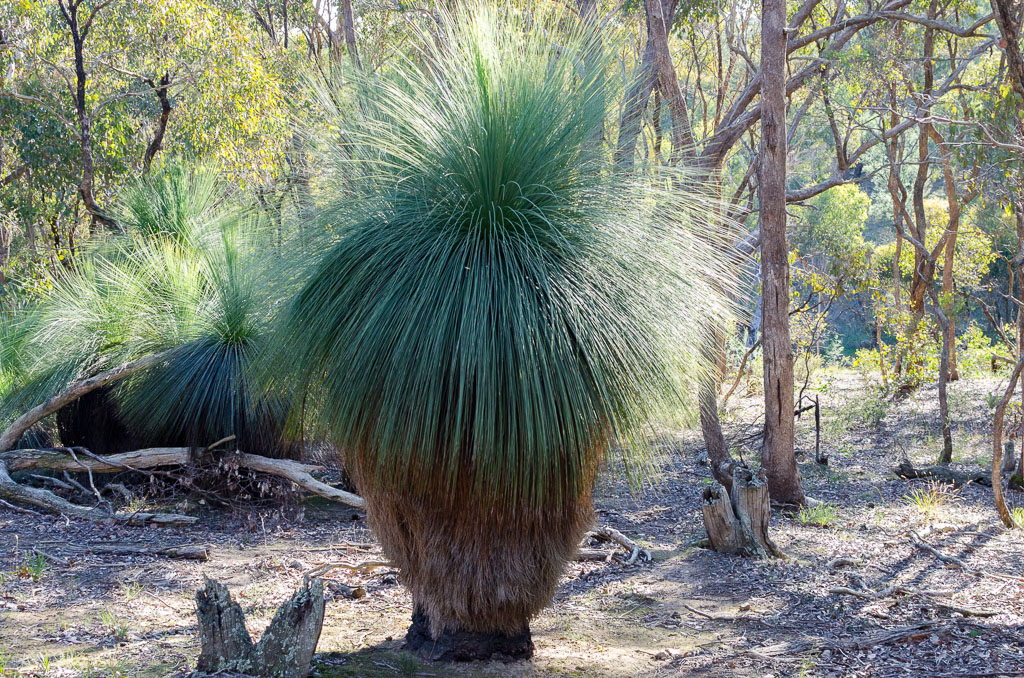 Well, I’m sorry to say, but as I did this walk back in May, this post is now a little retro. It’s been well and truly on the back-burner for a couple of reasons.

One is I’ve managed to tear myself away from the couch and do a few walks lately and the other is the pictures taken on this walk were kinda so-so. I do like a photo that reaches out from the screen and slaps me across the face with enough force to dislodge my dentures. Unfortunately out of the 150 or so I took on this day, I couldn’t find a definitive face-slapper, so this post will be quite a relaxing affair with no fear of being assaulted by random images.

This day hike has to be written though as it was the start of my ‘comeback’. During April and May I was hit by some sort of bug that wiped me out. In fact this was the occasion when I went to the doctor complaining that I had one of three things. Botulism, Malaria or the Bubonic Plague.

He surprisingly disagreed, with his prognosis being, “You have some sort of virus, but don’t worry, you’ll get your energy back in about six weeks.” Huh? I was thinking a week or so being out of action, but over a month? In fact he was right, as during this period I visited Bulla Bridge and found myself having to stop and put my hands on my knees from exhaustion after walking about 30 metres.

So, with a gradual return of mojo, it was time to make a comeback and there was only one place to see if my energy had returned. Yes, I was going to back to the Steiglitz Historic Park and reattempt a walk that’s part of fiasco folklore. The ‘Three Creeks Walk’ as detailed in the Glenn Tempest book, ‘Daywalks Around Melbourne’ had been tackled before, but the result was a spectacular failure which I detailed in my ‘Welcome to Purgatory’ post.

On a reasonably hot day (but not out of the ordinary) I fell apart and blubbered my way back to my car via any short-cut I could find. I blamed my woeful performance on an exuberant Christmas, in which I’d indulged a dozen roast potatoes too many.

It also didn’t help visiting the bakery up the road and coming across something they call the ‘French vanilla slice’. Is it French? Is it vanilla? Slice? I want the French vanilla slab. 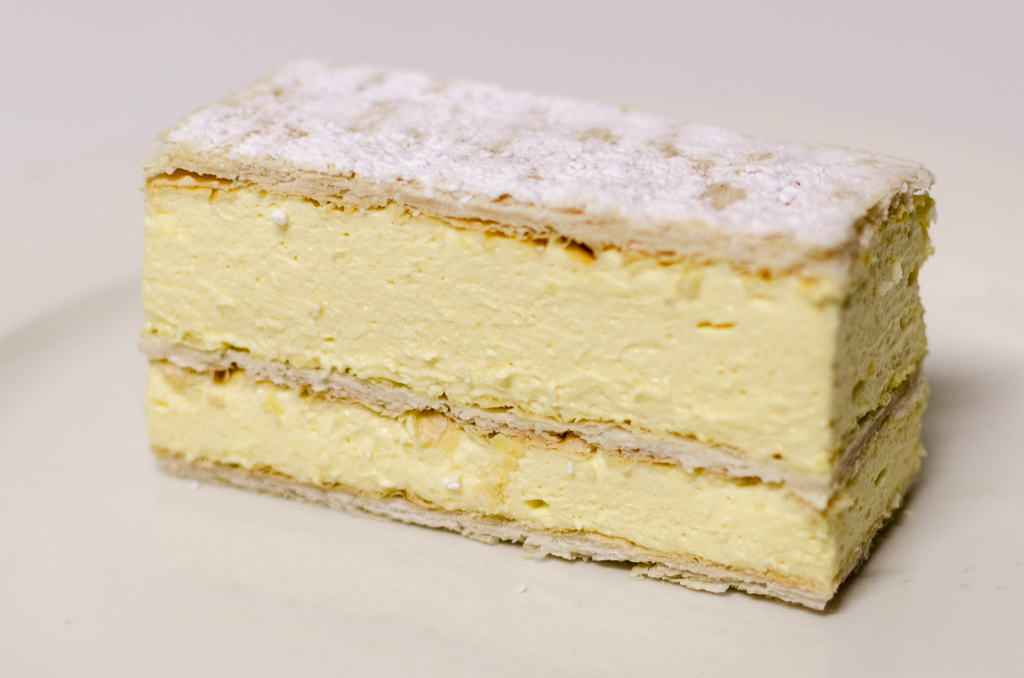 French vanilla slice. In all of its artificial glory.

I reckon I’d eaten close to a million of these at the time of discovery, but what’s interesting is that no matter when I visit they always have a tray full on display, whereas other cakes have sold out. Should I be worried that it appears everyone else thinks they’re crap? No, not at all, it actually makes me ecstatic, as it means there’s a guaranteed full tray for me!

Whilst I’m rambling, I might as well mention something else. A couple of days ago I was at the supermarket and at the check out the operator was rapidly filling my green shopping bag when she said, “Do you mind if I put all of the poisonous items in a separate plastic bag?” I was half-asleep at the time and could only nod in agreement, but I did wonder to myself, “What have I bought again that’s poisonous?”

Do you know what I found in the plastic bag when I got home? Toothpaste and shaving cream. I bet you didn’t know of the lethality of those objects did you? It’s handy to know though, as if you’re thinking of spiking a coffee to knock someone out, then you don’t need a touch of cyanide. No way, all you need to do is to empty some toothpaste into their drink and voilà! Down they go vomiting. So easy and so cheap!

Oh well, I guess I should return to the comeback walk shouldn’t I? It’s a pity, as it’s actually a lot more fun talking crap like this. Also, do you know what’s the problem with writing about a walk I did three months ago? I’ve totally forgotten what happened. So, you may wonder what the point of this sentence is, but it’s very important, as this waffling is giving me a chance to try and think of what the hell I’m going to write in the next paragraph. 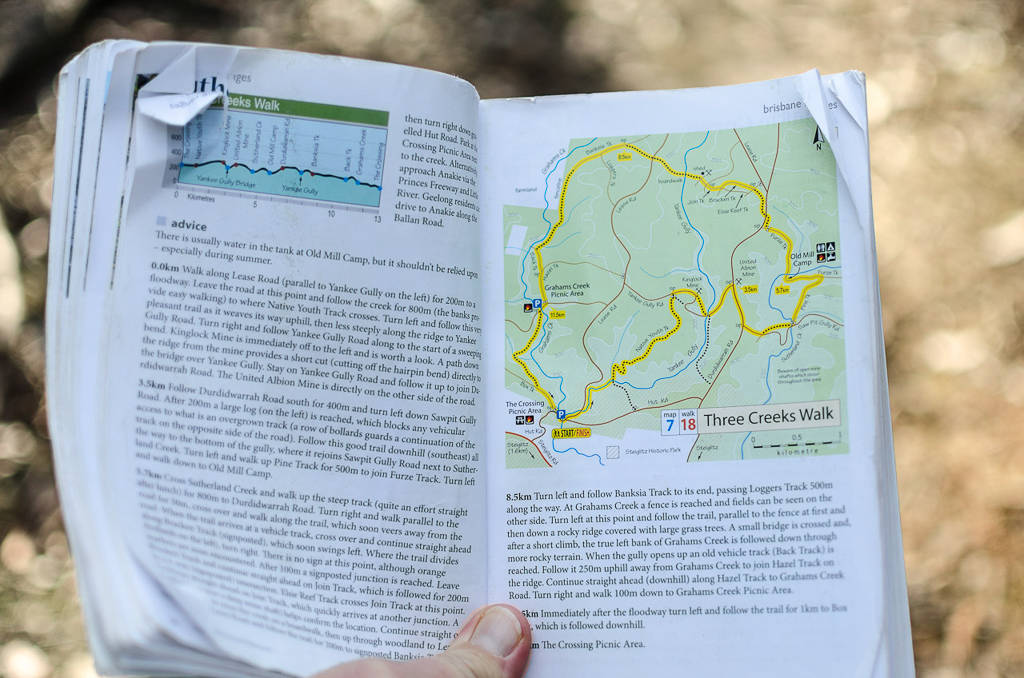 Yeah I know, not carrying a map is not ideal, but I think you should be more worried about the book. It’s certainly looking a little worn now having spent the odd walk or two shoved in my side-pocket. Anyway, remember the photos taken this day are not ‘face slapping landscape good’, so instead I’m going for the ‘colour and vegetation detail’ look during this post. Oh yeah, I’m going to stop talking now and just post a few pictures as I started to make my way around this walk. Firstly, I do like a blue sky against a shining white eucalypt. 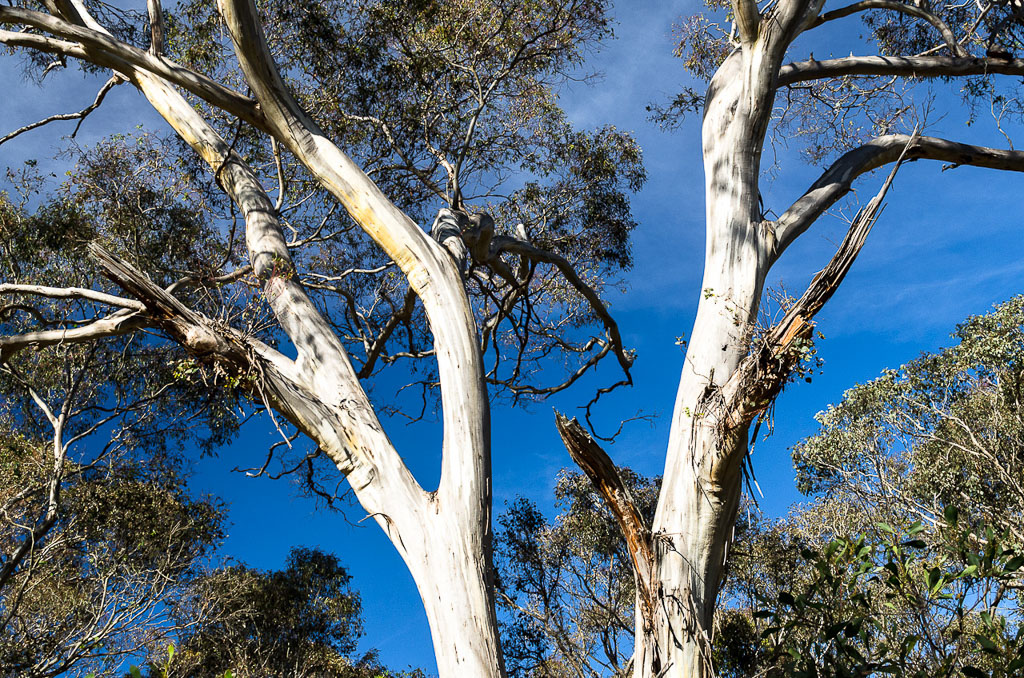 Oh yeah, I don’t mind a polarized green either.

There’s one thing about Steiglitz and that’s I’ve rarely seen anyone there during a full day of walking. Oh yeah, I’m not counting the bloke who didn’t have his pants on at the Kinglock Mine site during my Operation Hat Watch visit. This comeback walk was no different with no cars, no people, no anything. I guess the place isn’t called a ‘ghost town’ for nothing? 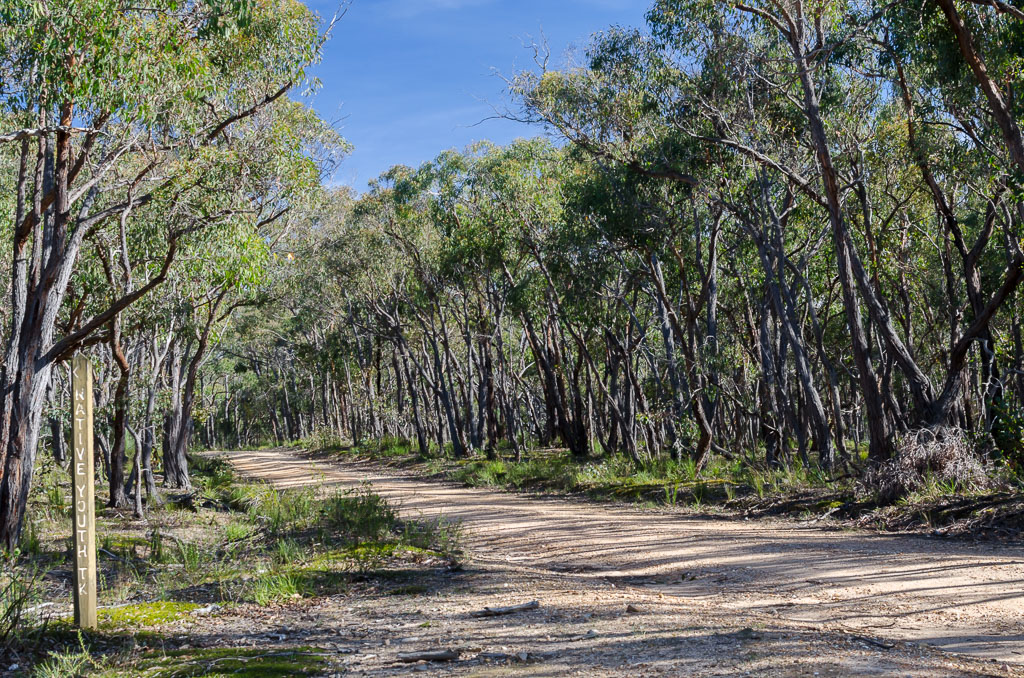 As I wandered along I reached Sawpit Gully Road. Here the notes decide to throw in an off-track section by leaving the road and taking a bit of a short cut. Finding this spot though meant looking for a log blocking an old road and some bollards on the opposite side. On my first visit I must have been half-asleep (again) and I didn’t see any of those things, so I stuck to the road. On this occasion, I was always going to take the short cut, but yet again I didn’t see any of those markers mentioned in the notes. In the end, I found a spot which I thought would work and ended up powering through the bush. 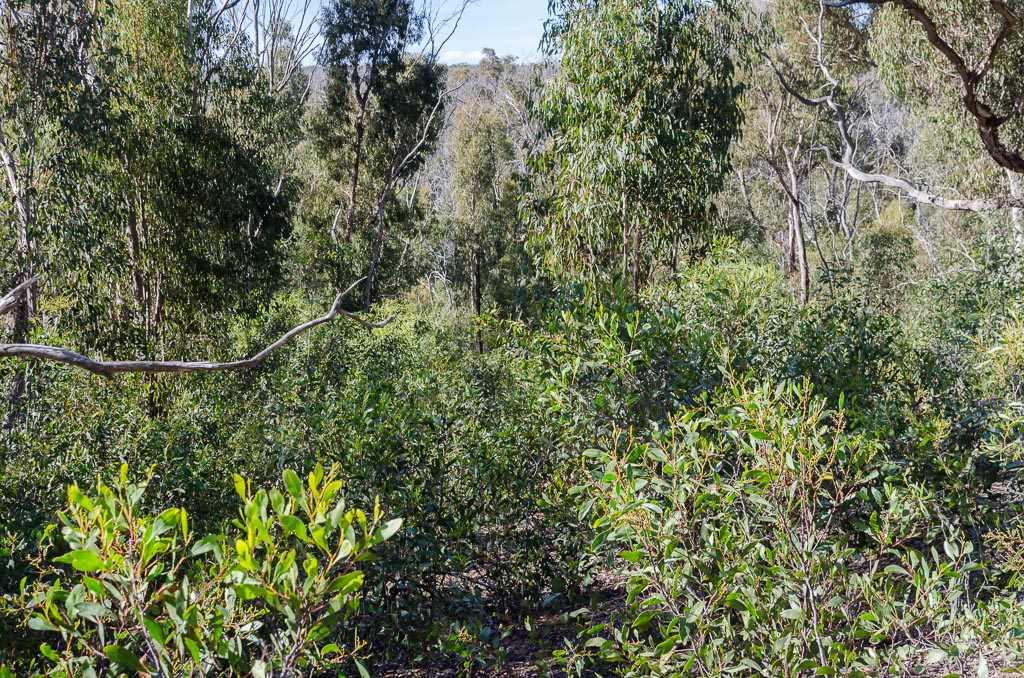 This is the way. I think.

Actually, is there any off-track walking that’s fun? It seems to mostly consist of having legs pulled out from under you and arms getting cut-up by trees whipping back and forth. Anyway, I made it out of the bush alive and passed the spot where on my last visit I collapsed in a sweating heap. On this occasion, I was cruising along with no problems at all. This ‘no drama walking’ does make for dull blogging of course, but I guess it’s better for my mental health. 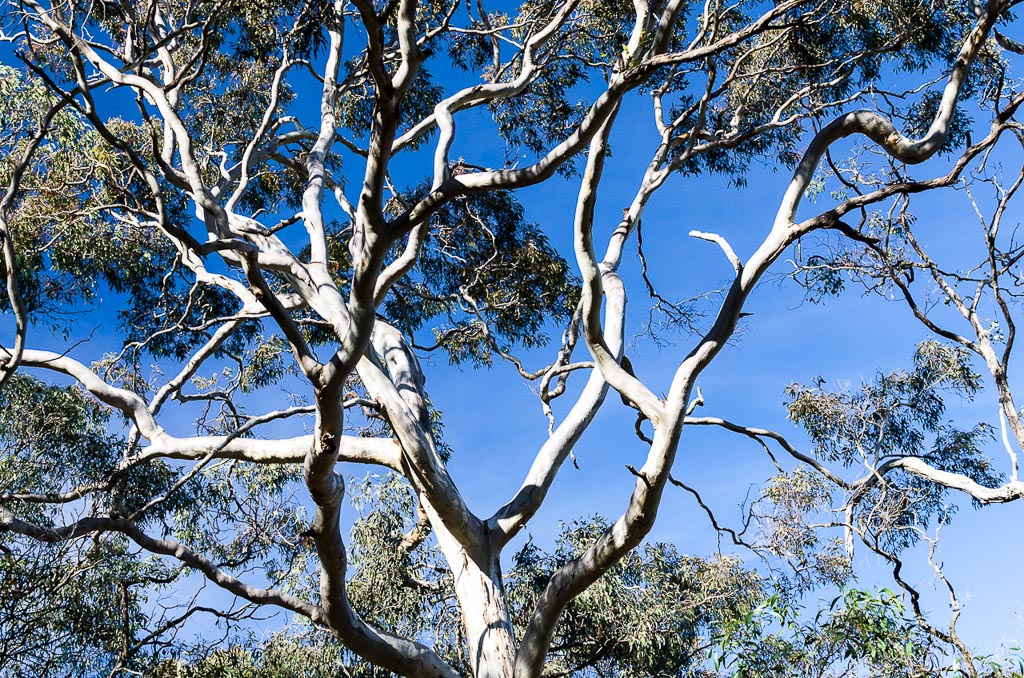 There was a brief lunch stop at Old Mill Camp with the upcoming section all new ground for me. Actually, the northern section of the walk appeared less visited than other parts I’d walked in. I mean even the signs were unvandalized. 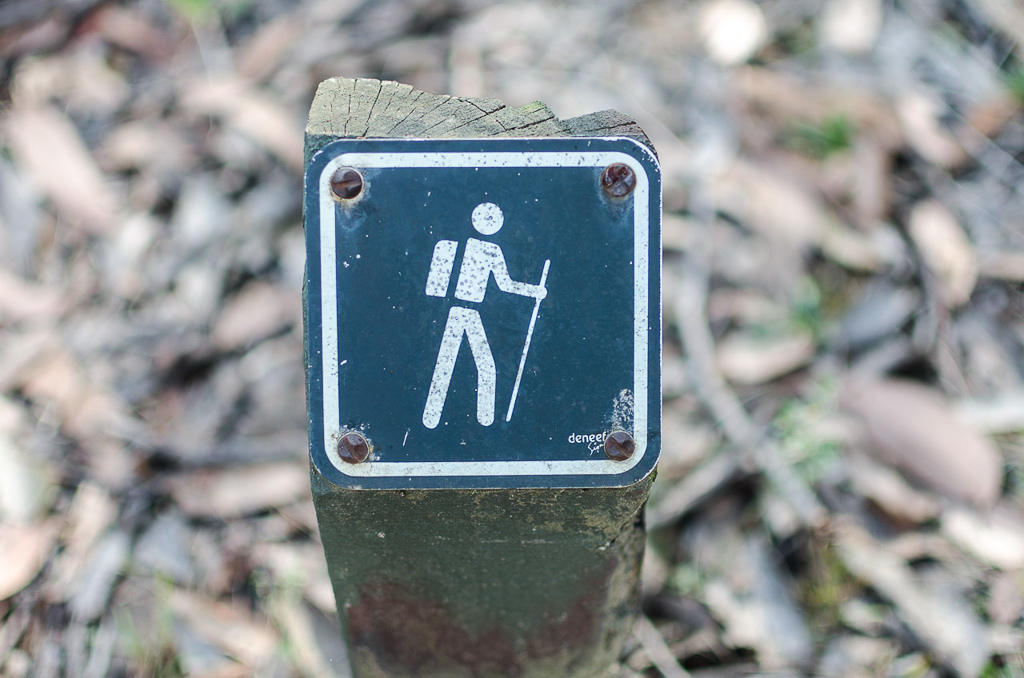 On the clear, sunny day, the trees had a glow to them… 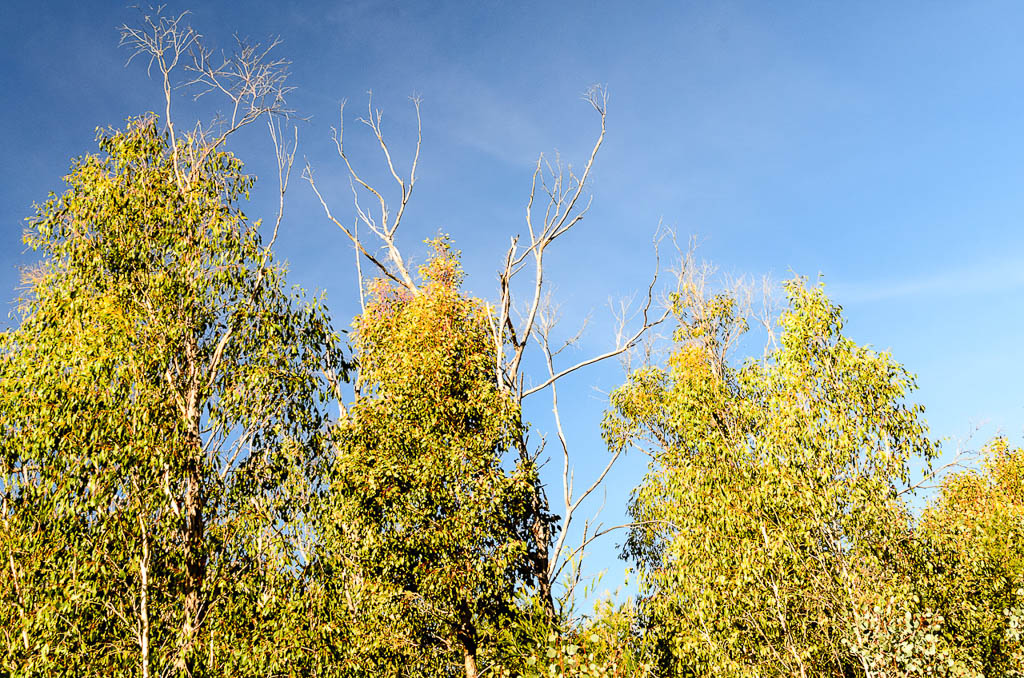 …and then I entered some tracks, which seemed a little woolly compared to others in the area. 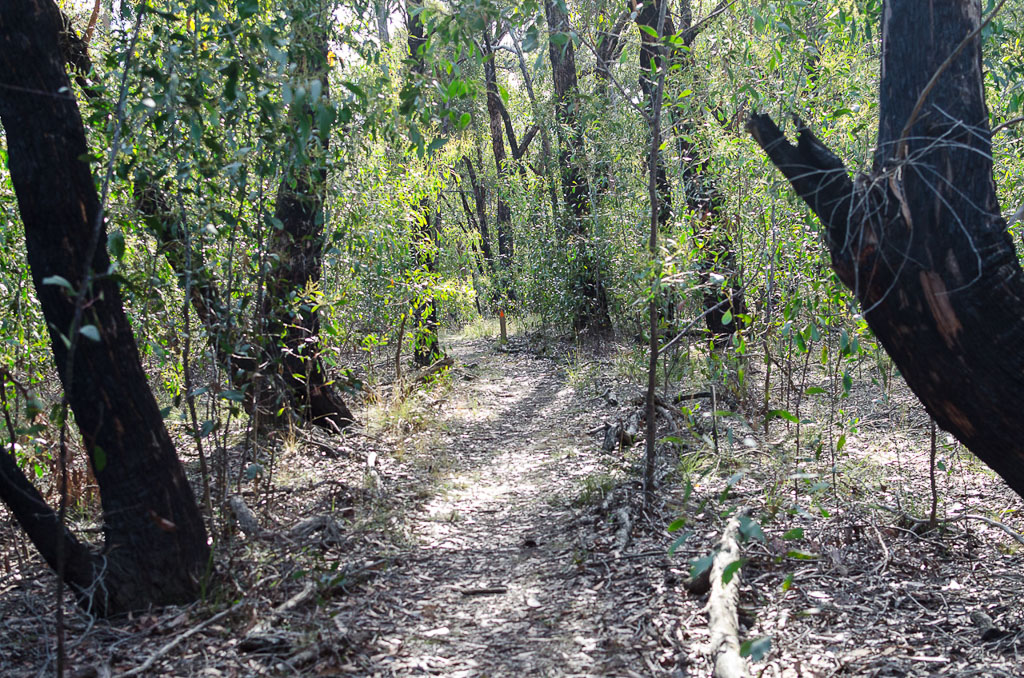 There’s a bit of regrowth through here from a fire (no idea when) but it’s still pretty much plain sailing. 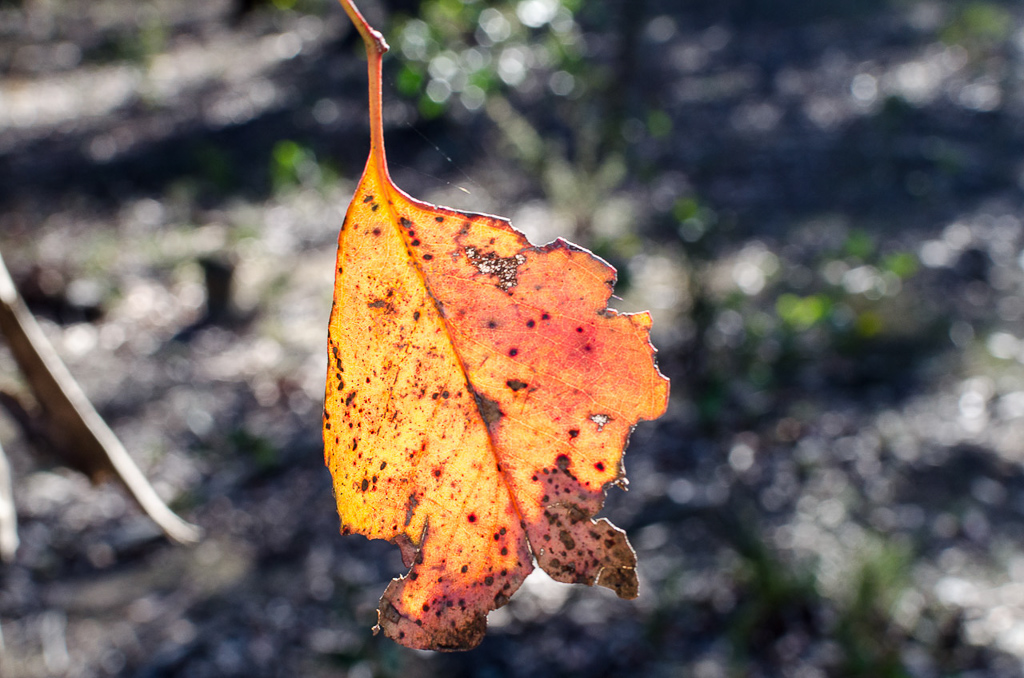 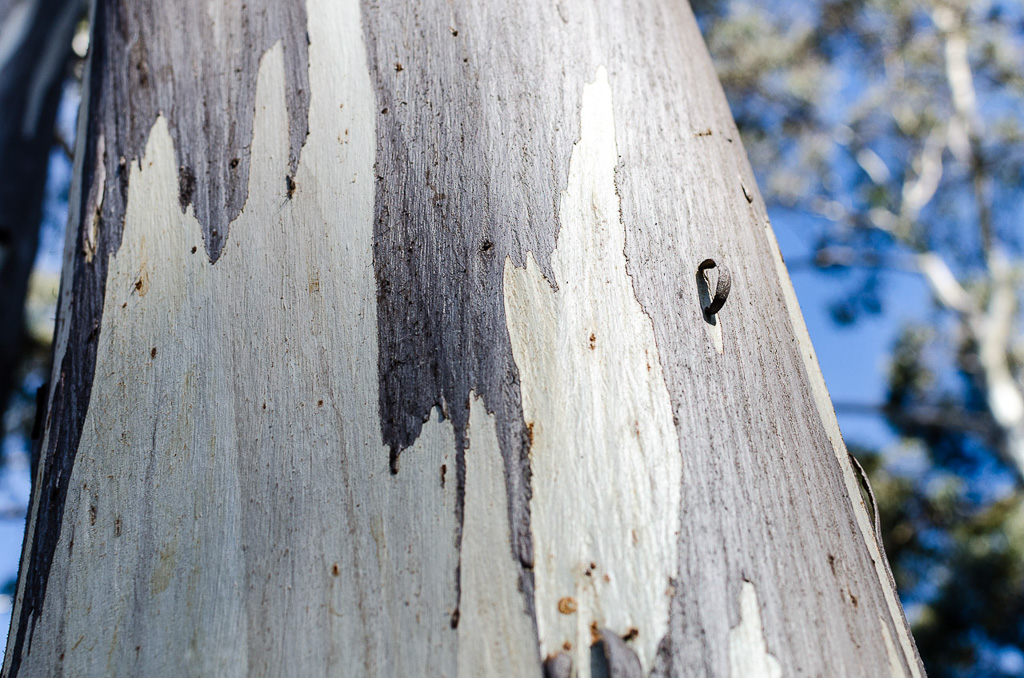 There is of course a million grass trees in Steiglitz and who doesn’t like a grass tree? 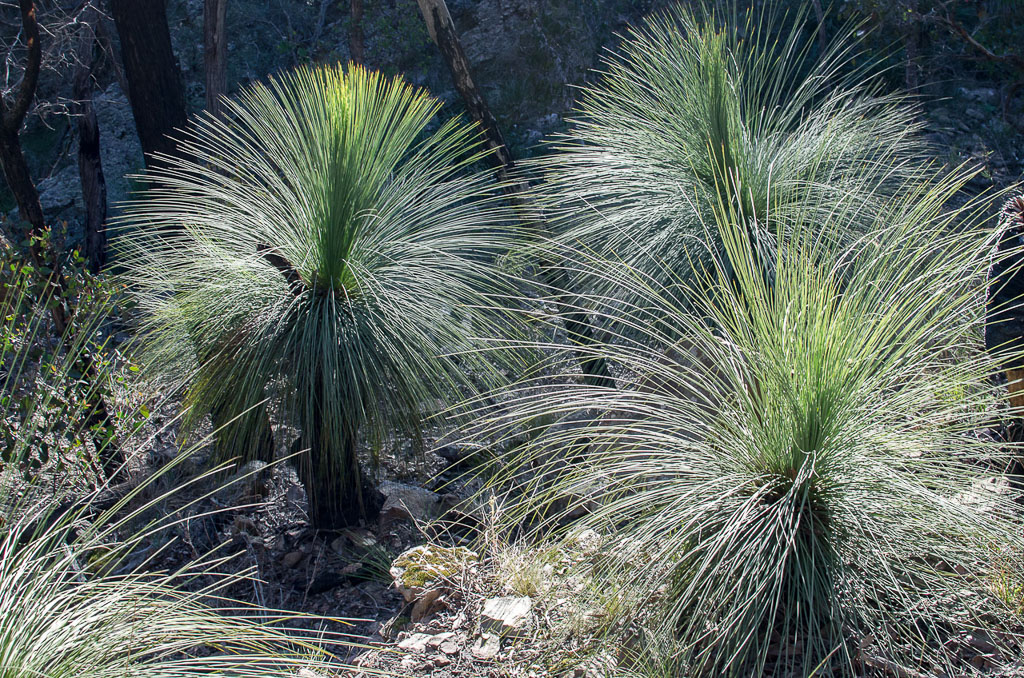 I cruised down Banksia Track with the sun starting to get a bit lower in the sky, but I was well and truly getting near the end. 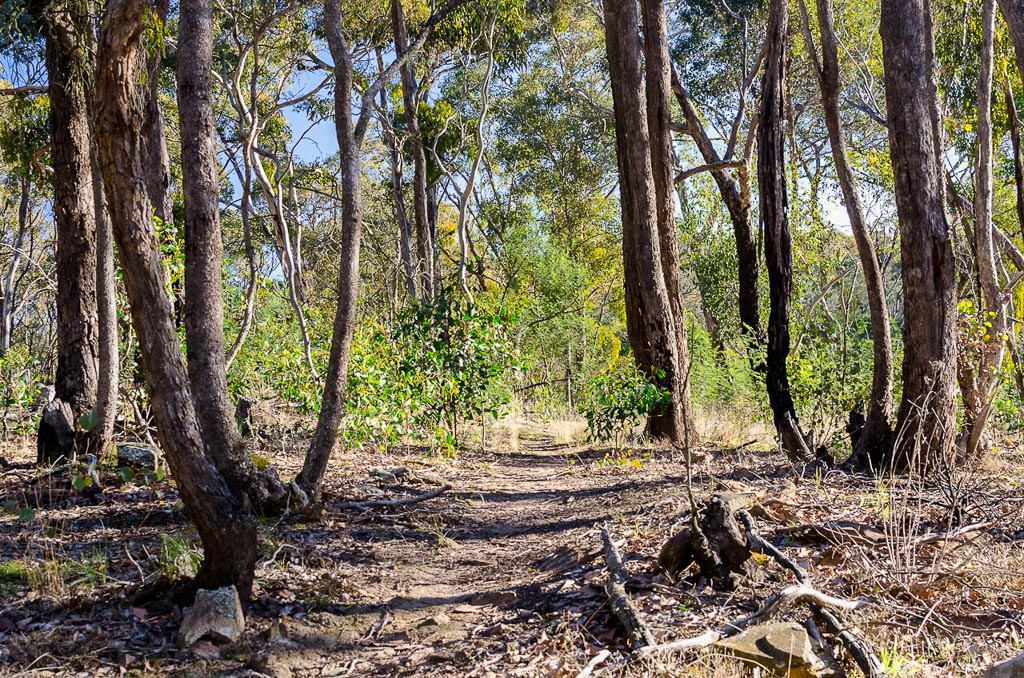 So far, do you know what’s not in this post? Well, it’s the ‘Three Creeks’ walk, yet I haven’t remotely shown you any of the creeks. There’s a reason for that though and that’s I don’t seem to have any photos of them. They’re not rampaging torrents, so I guess I forgot to take any photos at the required times? I do have one picture of Grahams Creek though, so this will have to do.

With the sun getting low I was entertaining myself with the ‘super sized shadow’ routine which is an old classic. Here’s one of the better ones. 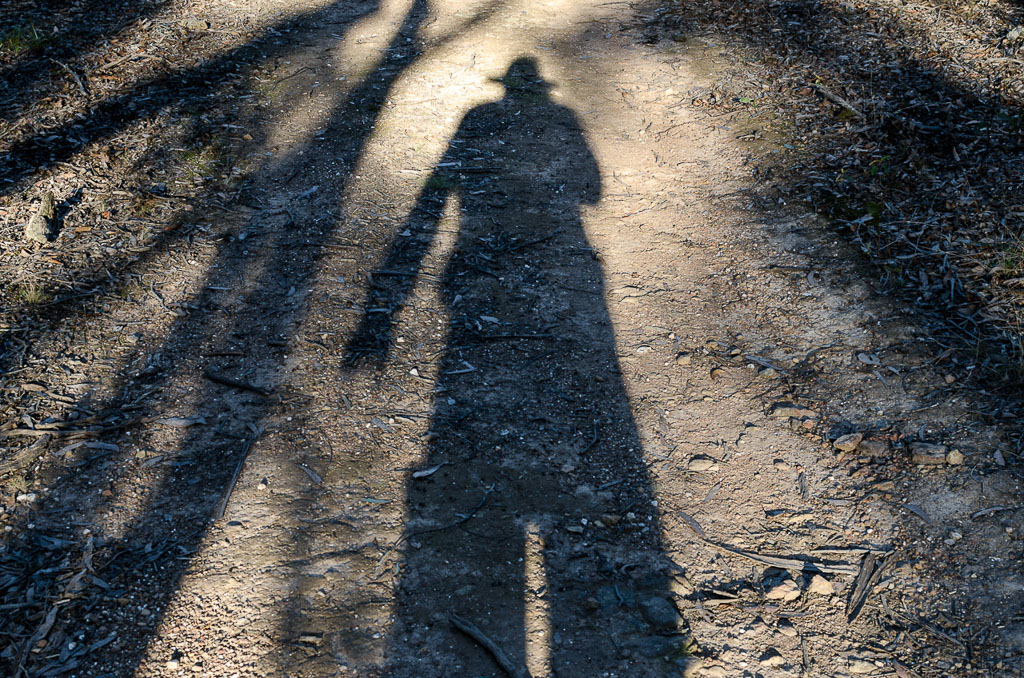 Look how big I am!

This late afternoon glow was also great for my vegetation photos. 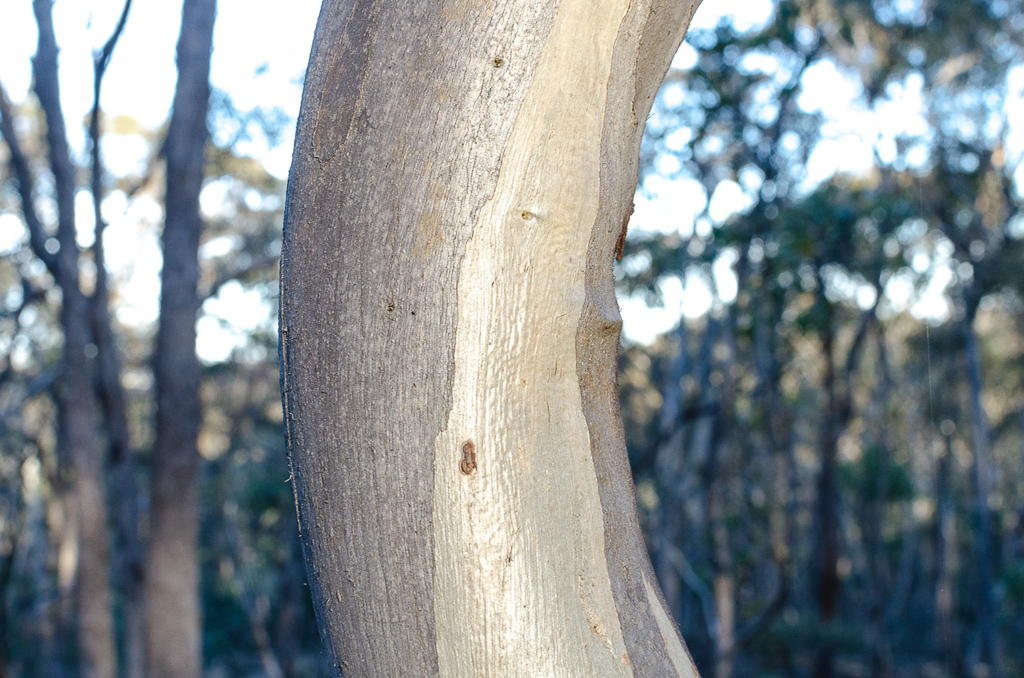 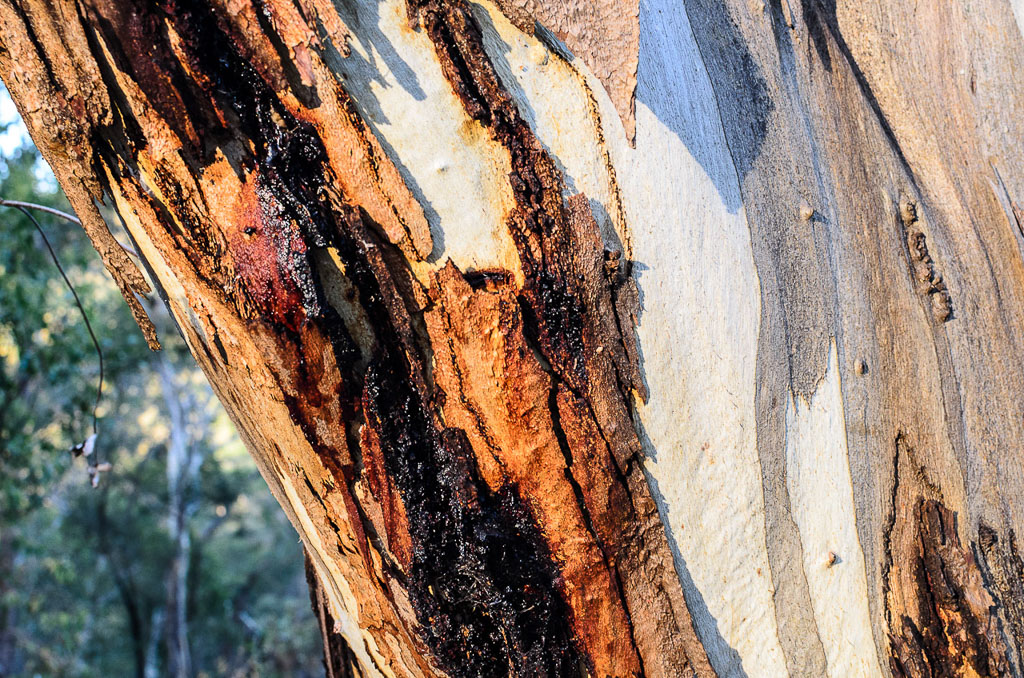 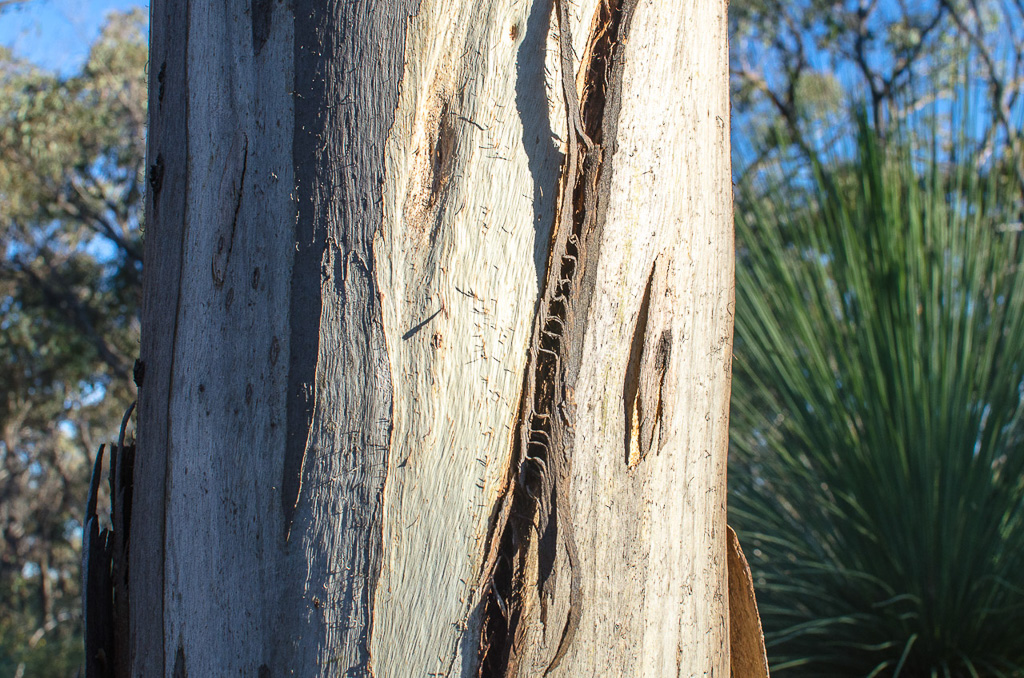 Oh yeah, how about one more? 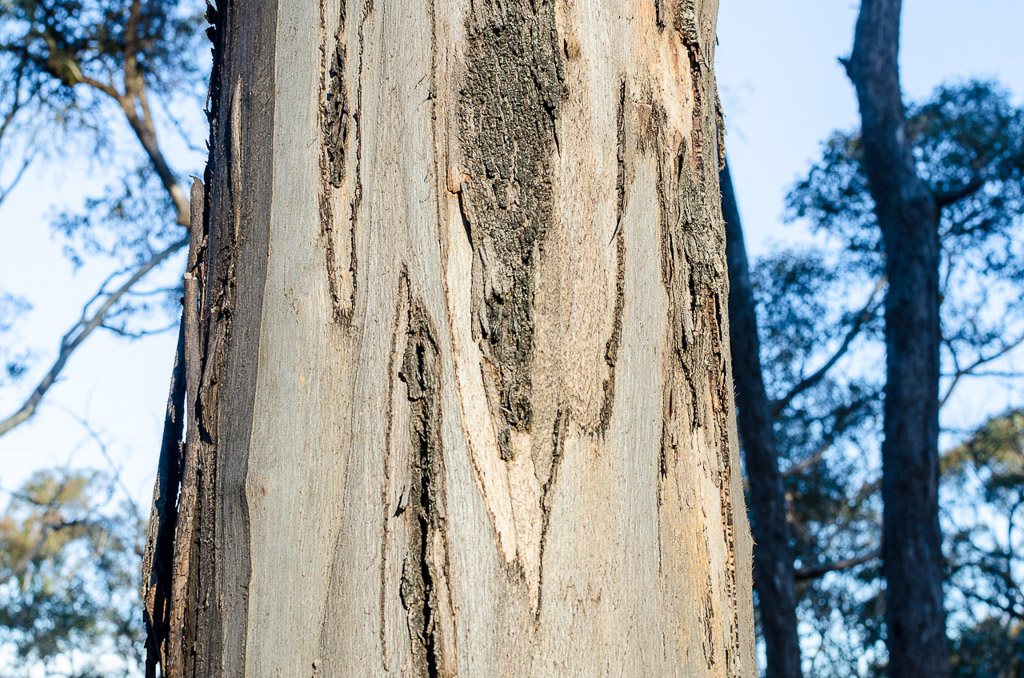 Okay, that’s enough and that’s it for the walk. Suddenly I was back at the car and I was wondering what all the fuss was about on my previous visit. How could this stroll be so difficult? Oh well, it’s done now. I took time to admire my Keen shoes. 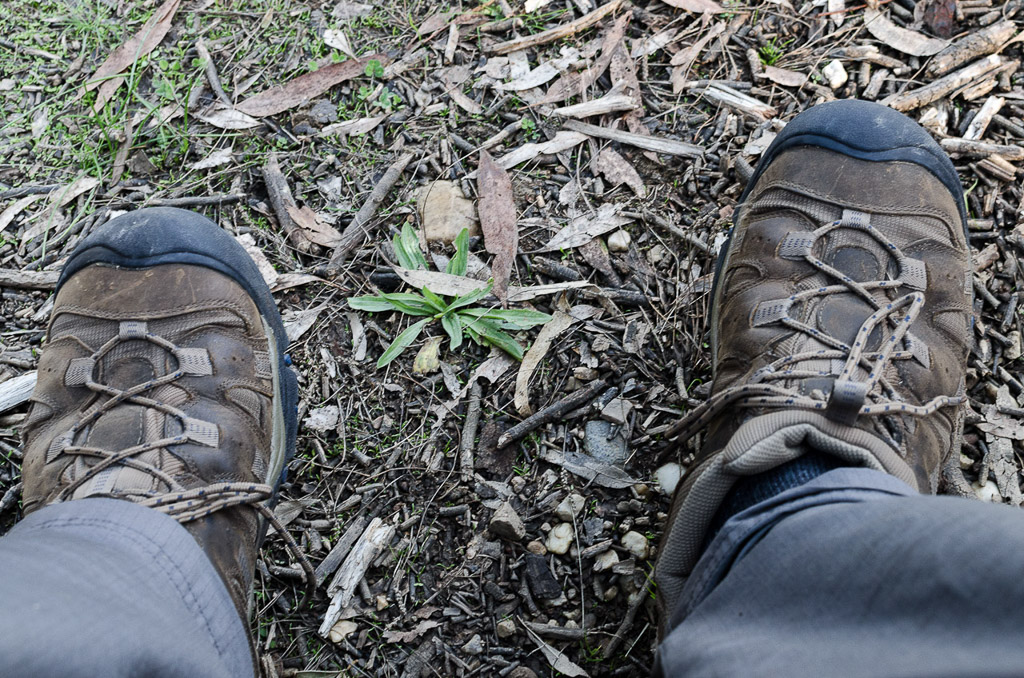 This was one of the walks in which they felt so good, I was leaning towards them for my upcoming Great South West Walk. It’s a pity they flamed out so spectacularly though, which reminds me I must get around to finishing writing up that sorry saga.

So, the comeback was complete with no hint of dying during the walk and just to round out a day of good times, my iPod that was set to shuffle was kind to me as well. Fancy getting ‘The Light Pours Out of Me’ by Magazine and ‘(White Man) In Hammersmith Palais’ by The Clash back to back? In fact, what would Joe Strummer think of the world today? All I know is the lines from this song seem more relevant than ever,

On that note let’s look at another photo from the ‘Fiasco Archives’. Here’s Joe Strummer at Festival Hall in 1982. 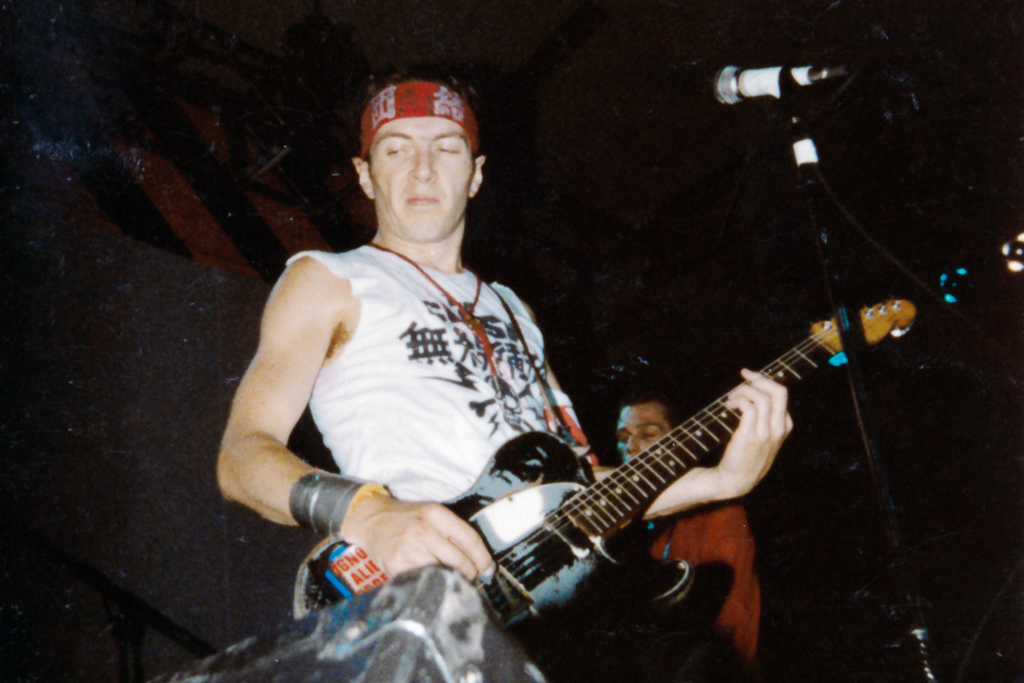