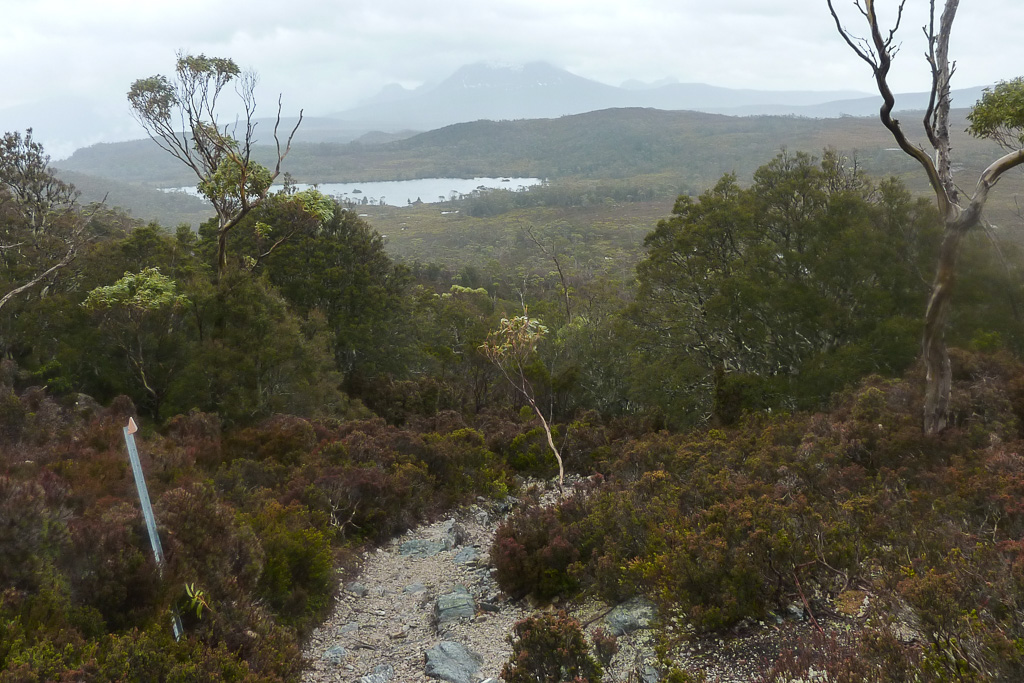 You may read the heading of this post and wonder why I’ve returned to 2009 when I’ve got plenty of recent stories to write about. Well, the answer is quite simple and that’s I’ve no idea and I’m the one writing it, so what hope have you got?

Anyway, I haven’t posted for a week or so for a couple of reasons. One is I’ve had to go back to work which means my ‘man of leisure’ activities have stopped for the time being and another is, “What am I going to write about?” It’s not like I’m short of stories, but I wasn’t sure whether to go full throttle and post all the stages of the Great South West Walk. One after another. I think I’d be pushing the friendship a little by doing that, so I’ve decided to drip-feed it to you.

So, back to the next instalment of my Overland Track trip and I’m going to pick up from where I left off at the start of the third day. I must warn you though. This section from Waterfall Valley to Windermere Hut has been a hard one to write up for one simple reason. Nothing happened. Well, some stuff did, but it’s so minuscule even I’m going to have trouble trying to talk it up into something newsworthy.

Anyway, here goes. Somehow I’d spent two days getting to Waterfall Valley Hut which sounds quite bizarre, but you know what? I had two short days before, which left me feeling entitled to a treat of another one that just happened to be even shorter. Don’t laugh, but I was planning a solid seven kilometre walk to Windermere Hut!

Actually, you’ll find a lot of people walking from Waterfall Valley skip the Windermere Hut and plough onto Pelion Hut, which is another 15 kms further on. Huh? Are you kidding? I was taking the short option which meant I had a decade of time to get to Windermere. In fact, I spent most of the morning in the old Waterfall Valley Hut lying in my sleeping bag reading and relaxing. I did get visited by some bloke who had spent the night in the newer hut. Was I being anti-social not staying with him in the new hut? Let me think about that for 0.4 of a second. Umm… No.

He left and then shortly after there was another knock on the door. “What is this? Rush hour?!” In walked a couple of blokes and one of them caught my eye with a pair of pants that I knew quite well. A long superceded pair of Australian Army Battledress pants seemed an interesting choice of trouser. You know what? I’ve still got a pair and this is what he was wearing… 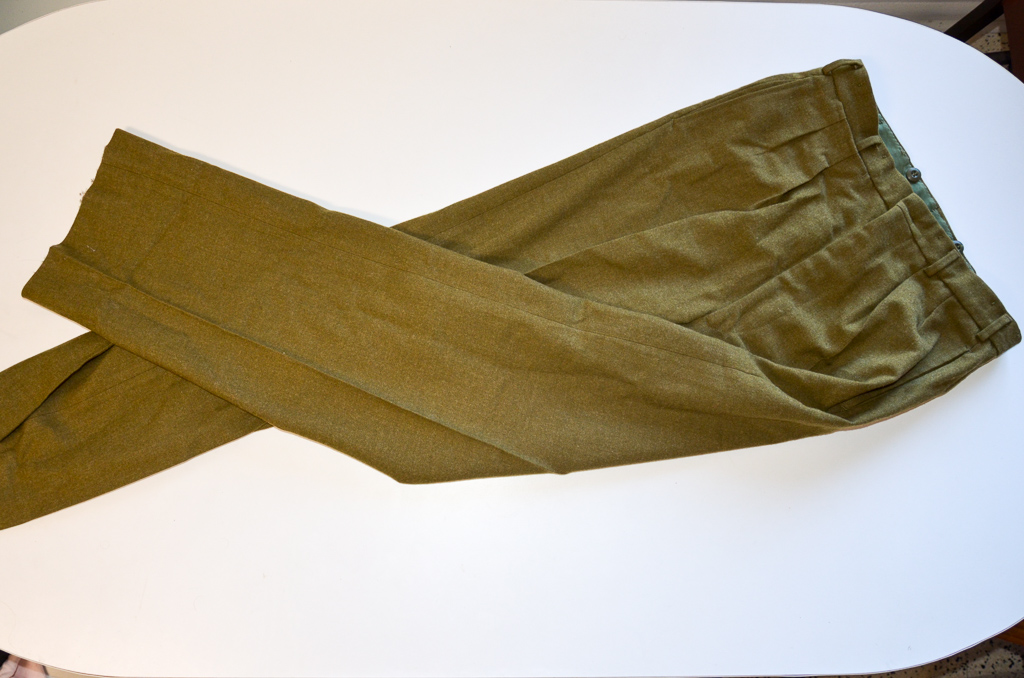 The one thing about those pants is that they’re wool which might be rugged and warm, but you know what? If they get soaked I’d say they’d stay wet for the next million years and to dry them you’d have to put them on a probe to Venus.

These two blokes were a pair I’d see at different times for the next few days and they were pretty entertaining. ‘Pants man’ had a big Coke bottle filled with dark liquid in his pack and silly me thought it was Coke didn’t I? Well, upon catching up we’d talk for a minute or so, pause and then he’d say, “Do you want a Port?” Oh yeah, these blokes were legends!

Anyway, they’d come to visit the old Waterfall Valley Hut and see in their words, “Some bloke who looks like he’s made the hut his home”. Yeah, okay, I’d more or less taken ownership of the hut by utilising most flat surfaces to put my crap on. That’s not important though. The one thing ‘pants man’ was most impressed about was the book I happened to be reading. There was no fluffy spiritual hiking book on this trip. No, it was time to unleash the beast and ‘Slaughterhouse-Five’ by Kurt Vonnegut was my book of choice. Here it is. 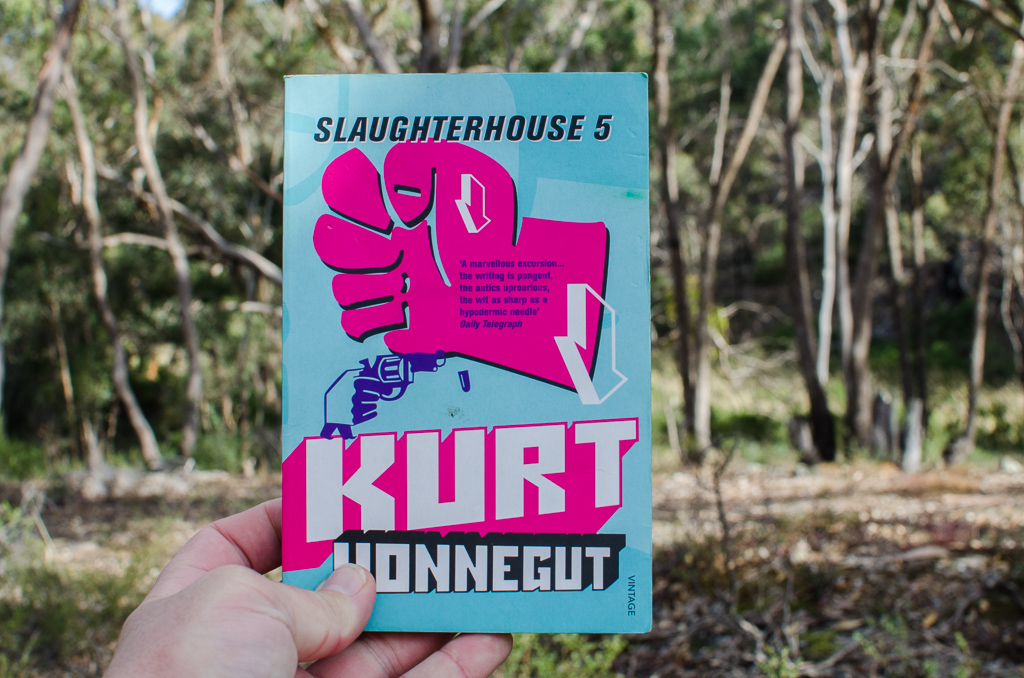 ‘Pants Man’ was pretty impressed. “Vonnegut! Yeah!” was his cry. Fair enough, as it’s a classic and built for walking by being only about 12 pages. Anyway, we continued chatting and their plans for the day was to maybe stay at Windermere Hut, but more than likely to kick on to Pelion. This did mean they had at least a 22 km day coming up and they were wasting time talking crap with me instead of walking. In the end they headed off and I elected to prepare for my puny seven kilometres.

I wasn’t going to be a complete slob though, as I did plan on doing a side-trip to Lake Will on the way, but as I set off I noted the sky was a little ominous. The previous days sun was long gone and there was a distinct chill in the air, accompanied by grey clouds rolling in. I’ve mentioned this before, but I’ll have to say it again and that’s I loved the old weathered timber track markers covered in moss. I reckon I’ve got over 30 of these sort of photos on this trip alone! 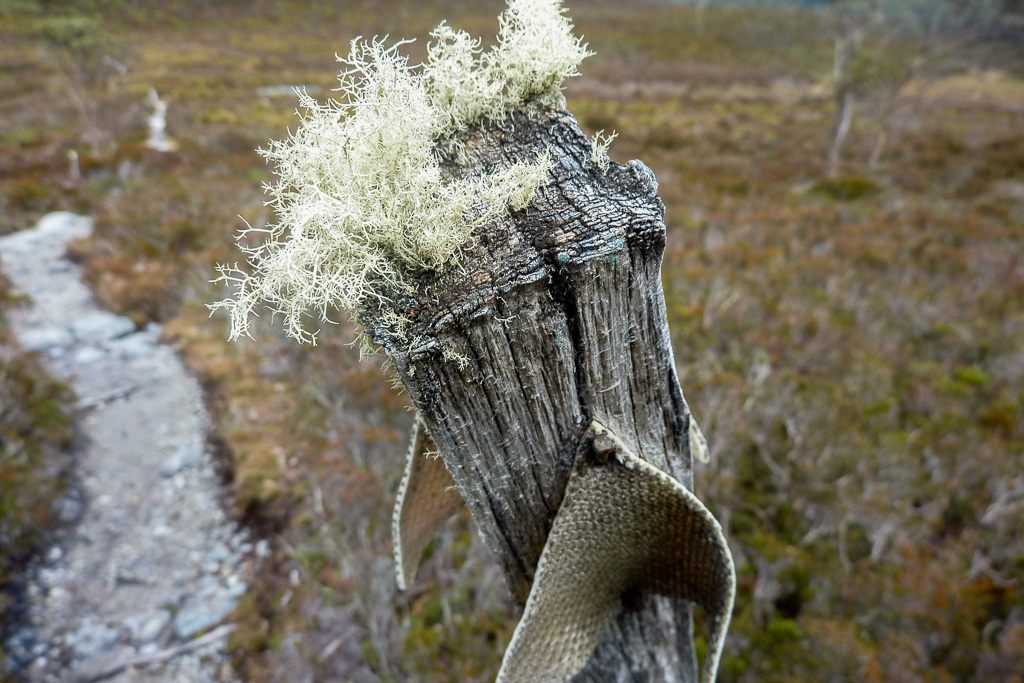 You say you want another one? Okay then… 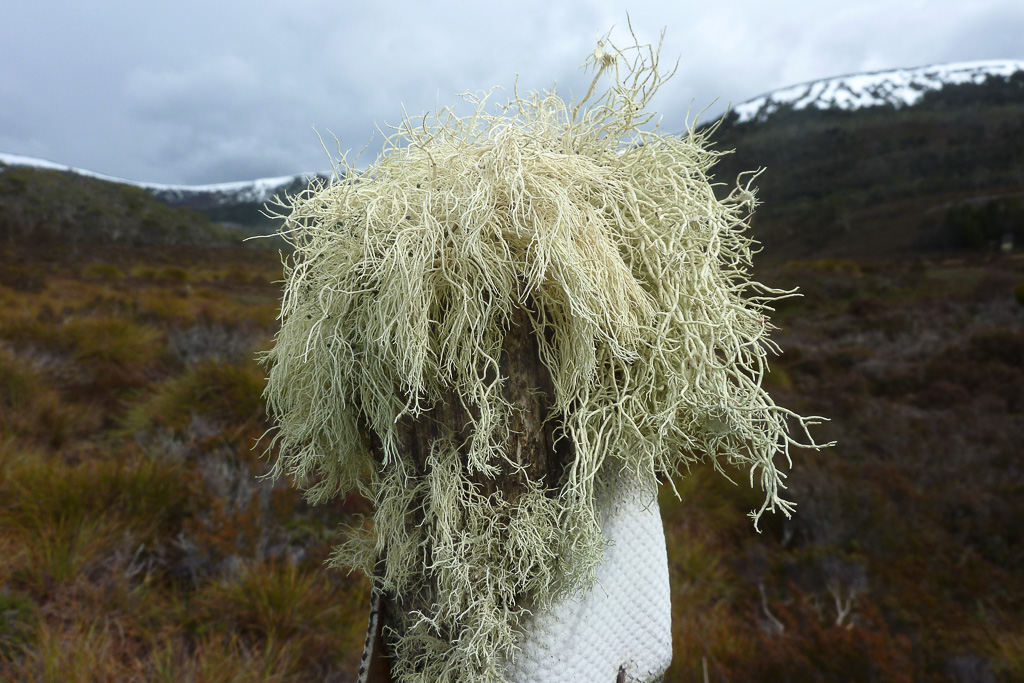 There’s one thing about Tasmania and that’s it doesn’t look like anywhere else I’d been to in Australia. Does that even make sense? I’m not sure myself, but the whole area looks like a place you’d suddenly come across a dinosaur walking around. 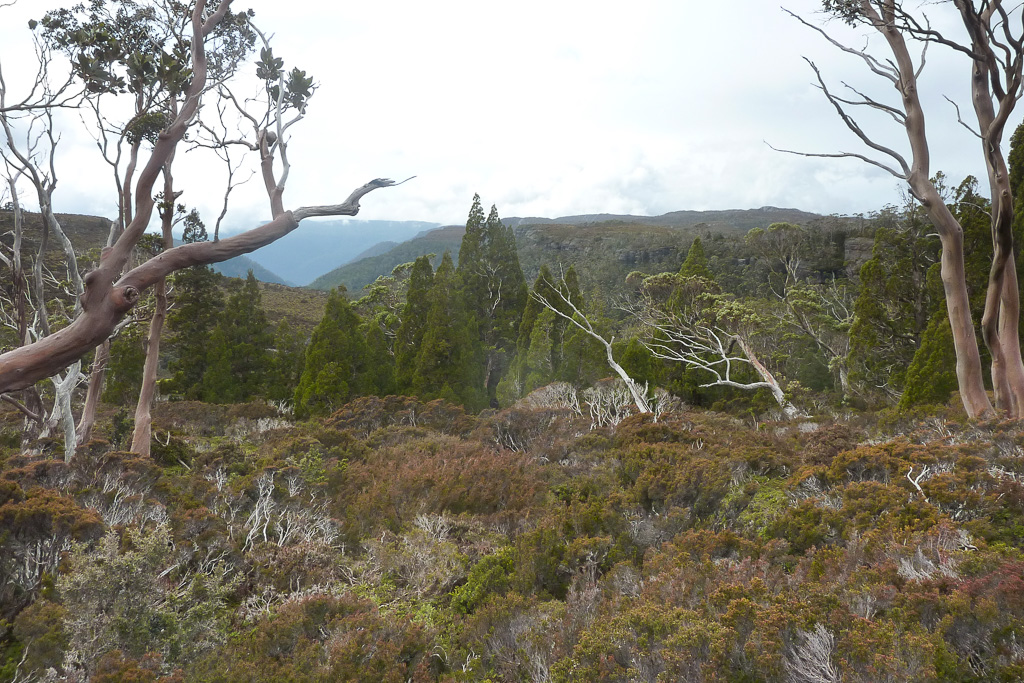 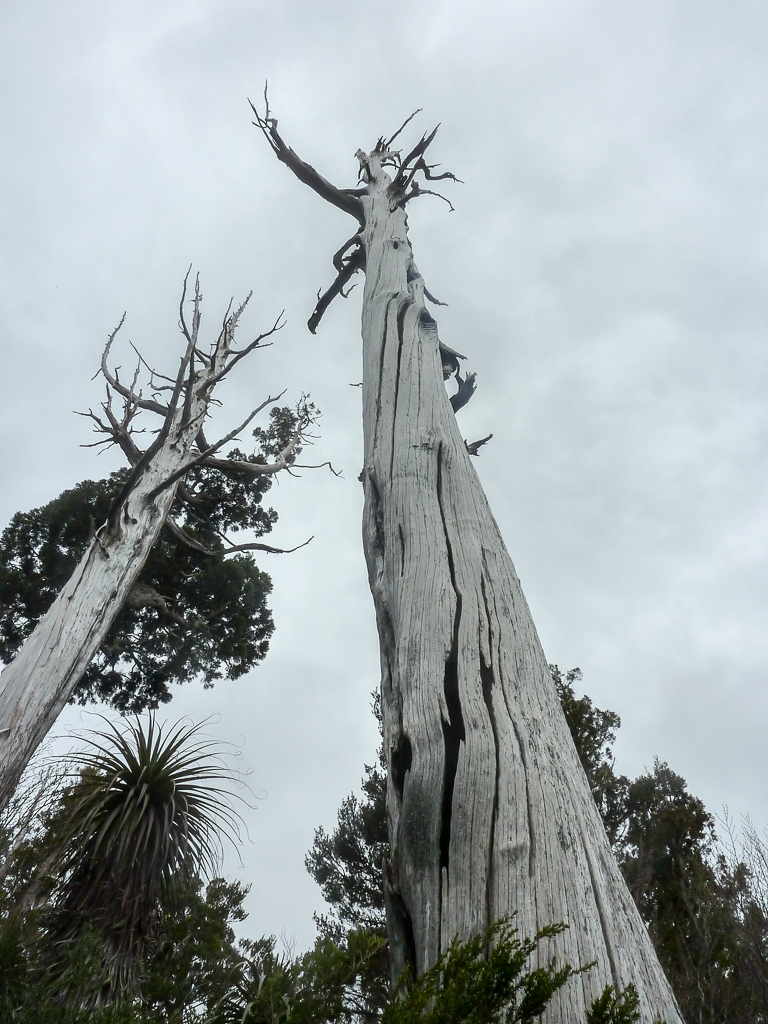 As I was walking it was almost inevitable that rain was on its way, but it didn’t deter me from changing my plans of visiting Lake Will. How could someone shorten a day even more?! The clouds were getting dark though around a still snow covered Barn Bluff… 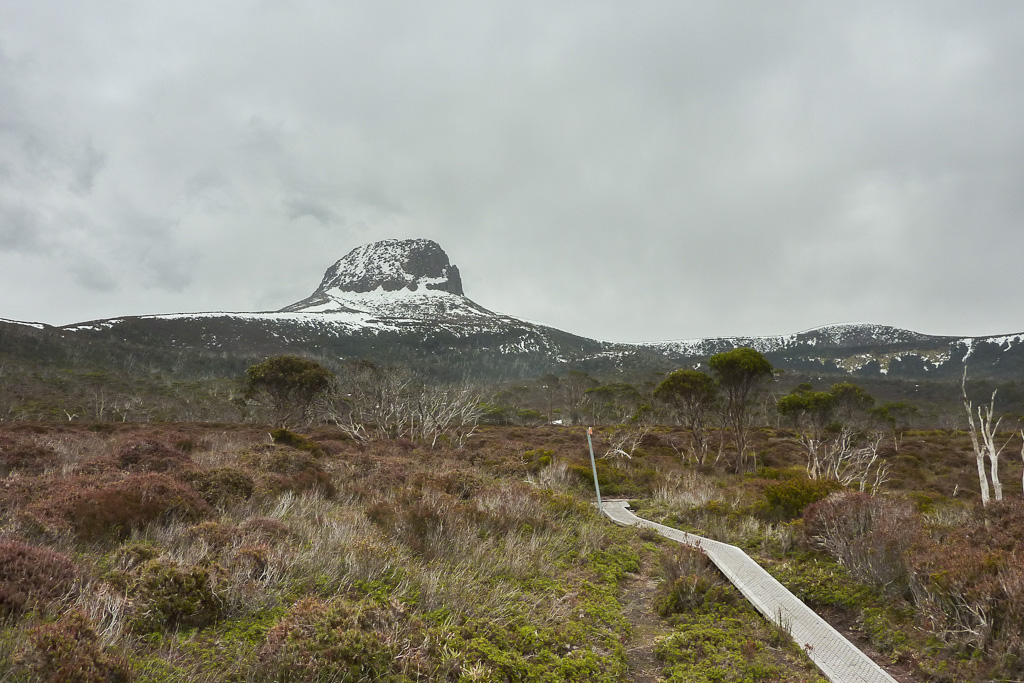 I reached the turn off to Lake Will in pretty good time and started the kilometre or so walk to it. As it seemed with most things in the area, Barn Bluff dominates the view from the lake as the clouds continued to roll in. 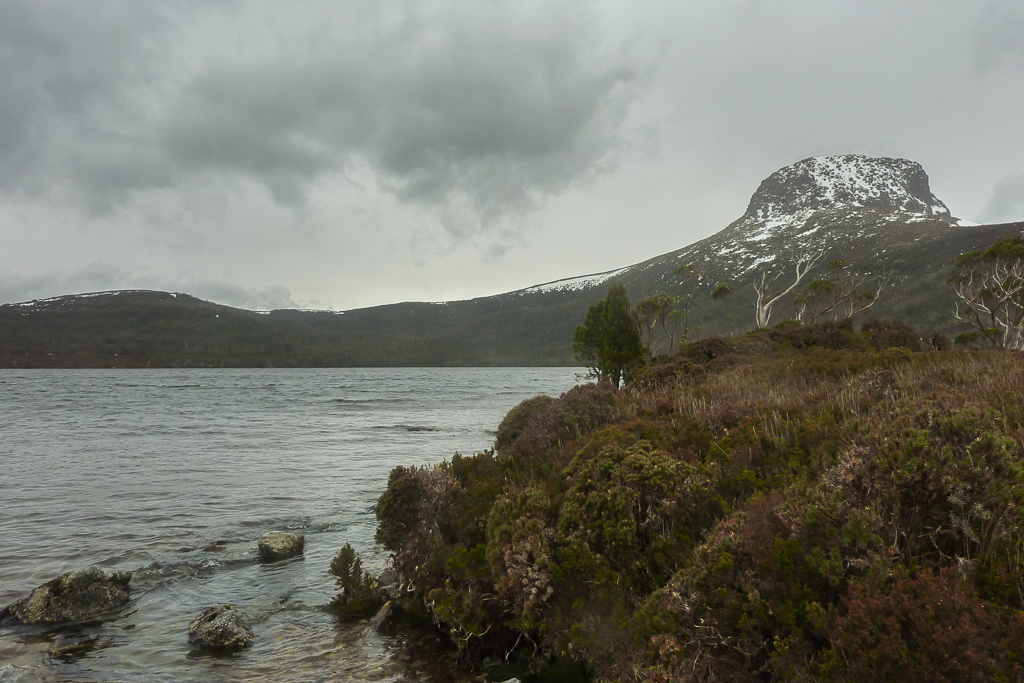 It was all going well when I reached the lake and stopped for a snack at a small sandy beach. I was casually watching the lake whilst munching away when a disconcerting freight train sound began heading my way. I’m not sure what happened to my chewing, but I’m pretty sure it stopped, as a visible ‘wall’ of wind headed my way. Whipping up the surface of the water as it did so. When it reached me I felt my toupée lift a few inches from my head. Then it slapped back down against my skull and made a flapping sound like a yacht sail in a storm. I’m not joking, but this is exactly how I looked. 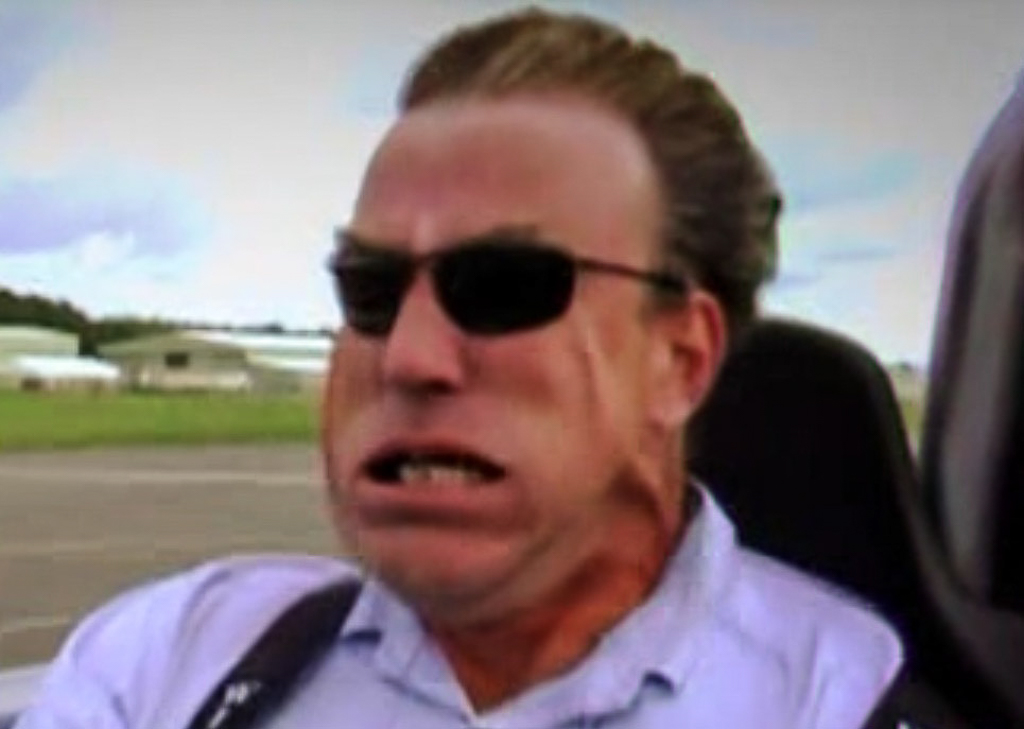 I actually took a photo when the wind hit, but you know what? It doesn’t capture how it felt at the time, so you’ll just have to take my (dubious) word for it. For some idea, I guess you can compare the surface of the water to the other lake photo. 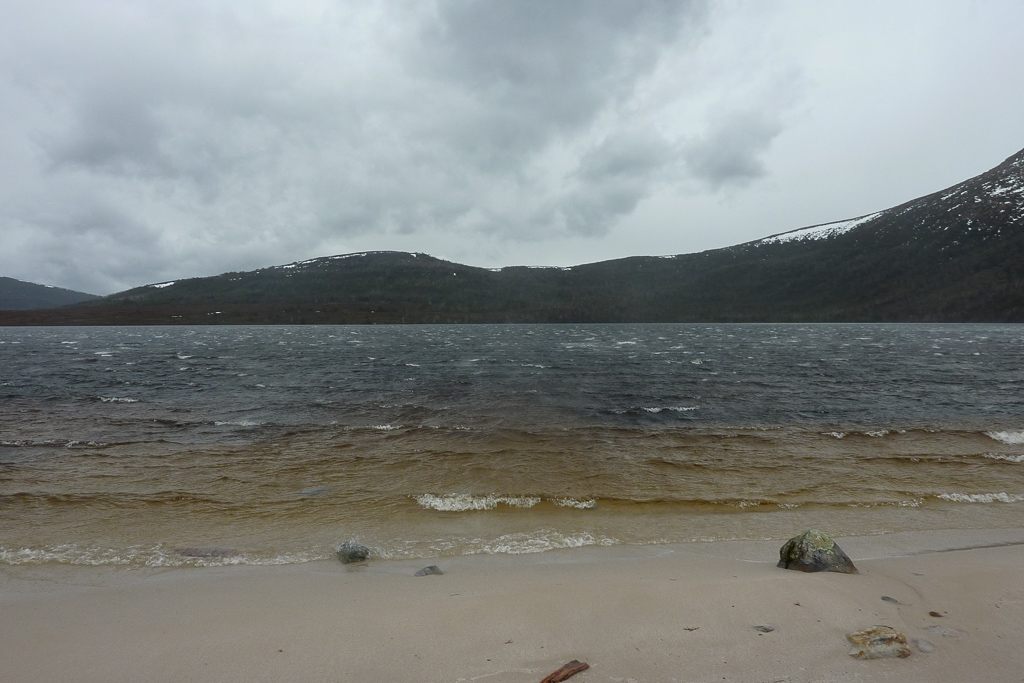 All of this action was well and truly my cue to get out of there. I had no protection from the wind near the lakes edge and although rain hadn’t fallen it was only a matter of time before it did.

I wandered back to the main track with the benefit of a breezy tailwind and began heading towards Lake Windermere. I did pass Lake Holmes on the way which was marked by a fairly wonky sign.

The Overland track continues on, heading up a rise to a ridge that overlooks Lake Windermere. During this climb the rain well and truly hit and I had this little thought in my brain that I’d just scuttle down to the hut without putting my wet weather gear on. What? You idiot! It started pelting, which had me dumping the pack and looking for everything I had to put on, including gloves. I don’t mind a hiking glove, but whenever I mention it I seem to get derision from men. Is it a threat to masculinity to wear gloves?

Anyway, the problem for the rest of the day was that I took the picture from the ridge looking down to Lake Windermere in the photo at the start of the post and… 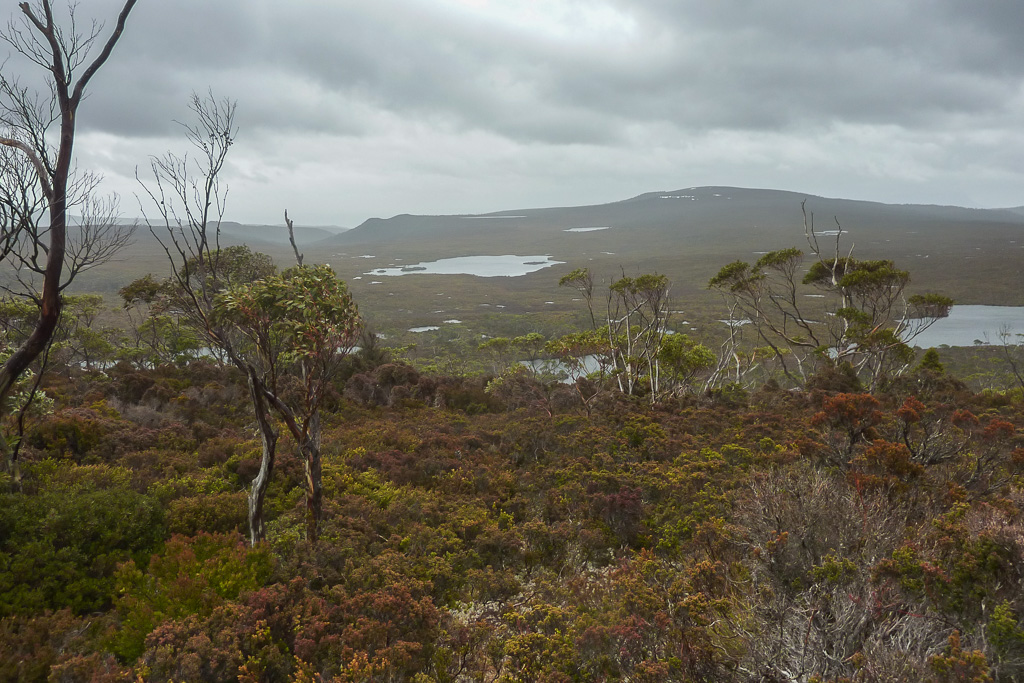 …this one and that’s it. The camera had to go away with the rain coming down which makes for problematic posting. One day I’m going to write a post that has no pictures in it. Is it possible? Can one carry a post with words alone and not have something to look at? No pictures? Egads! Oh the humanity!

I trotted down the track and within minutes passed the impressive Lake Windermere (sorry, no photos. It was raining) and then the hut was in sight. I barged in as if I’d just stepped off the deck of a trawler in a storm in the North Sea. I really didn’t think any one would be there, but lo and behold there was a bloke standing there and he’ll be now known as the ‘Man from Boston’ (MFB).

There’s a small heater in the living area of Windermere Hut and he was partially stripped off, standing in front of it with his clothes hung up, drying nearby. He was soaked and I noted he was going pretty lightweight with runners and a minimal pack. We got talking and he told me he’d come from Pelion Hut which meant he’d covered the distance quite quickly compared to my dawdling seven kilometres in the other direction. I pottered around taking pictures of the rain which is handy as I’m struggling for photos here. 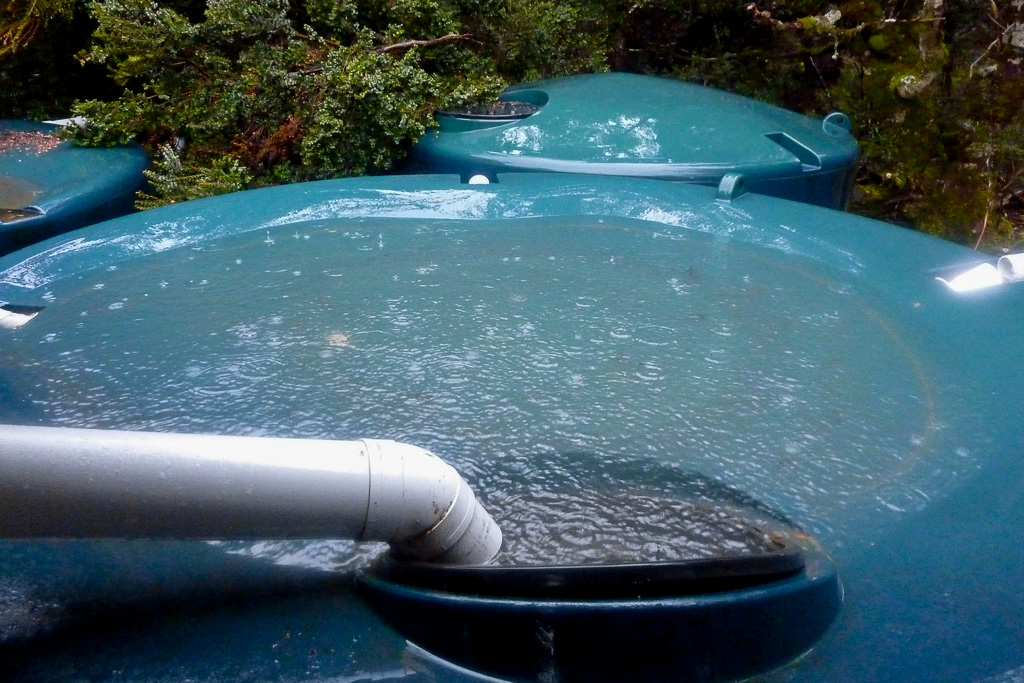 What’s interesting is when I started asking him questions. I heard the American accent and asked where he was from. This led to him telling me he was from Boston. Boston has intrigued me before, so I asked him the following questions. What’s Boston like? How big is it? How many people live there? Is it bigger than Melbourne? Is the population in a sprawl like Melbourne or is it more central? Do you like living there? Judging by your gear you must do a lot of hiking? Where have you walked?

This continued on for a few minutes until he suddenly said, “Where’s the next hut? I think I have to go.” Huh? Due to the almost total disrobing I was positive he was staying. I informed him Waterfall Valley was only seven kilometres away, so he proceeded to put all of his soaking gear back on, refill his drenched backpack and with that he was out the door! It left me wondering, “Did I ask too many questions?”

You know what? I actually wasn’t complaining and I really should perfect the ‘annoyingly question asking friendly hiker’ method, as it was a winner in this case. So, with the Man from Boston gone I now had all the space he was using to dry his clothes for myself. It was time to start hanging things up. Including my masculinity threatening gloves. 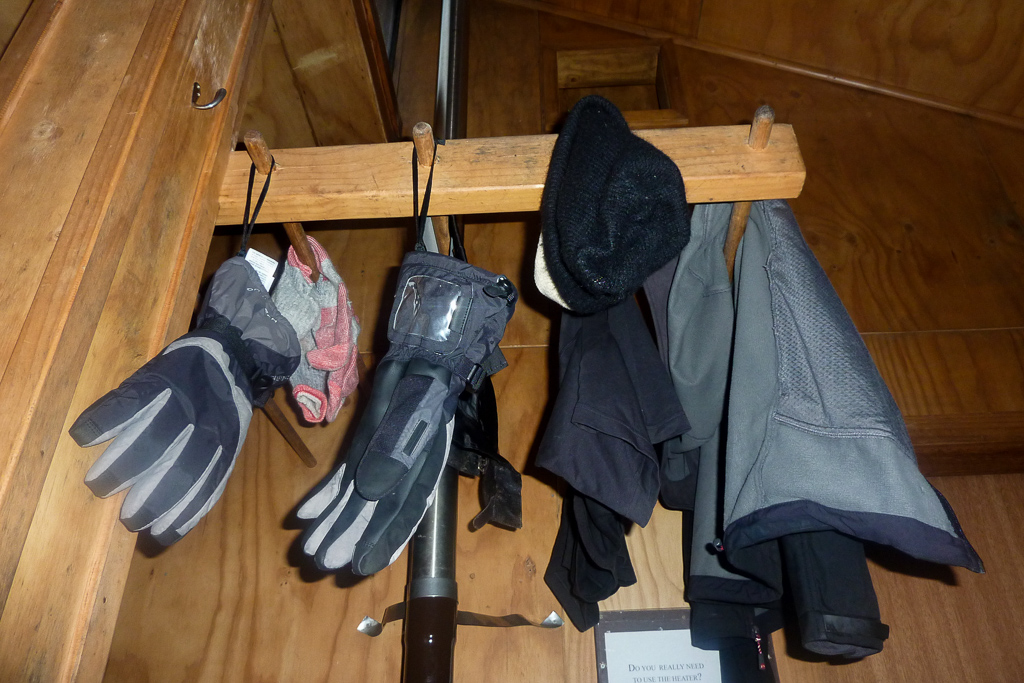 I sat around relaxing thinking that ‘Port Pants Man’ from earlier in the day might come through, but they must have got ahead of me when I trotted down to Lake Will and continued on to Pelion Hut. So, with the hut to myself I commenced picking a bed for the night… 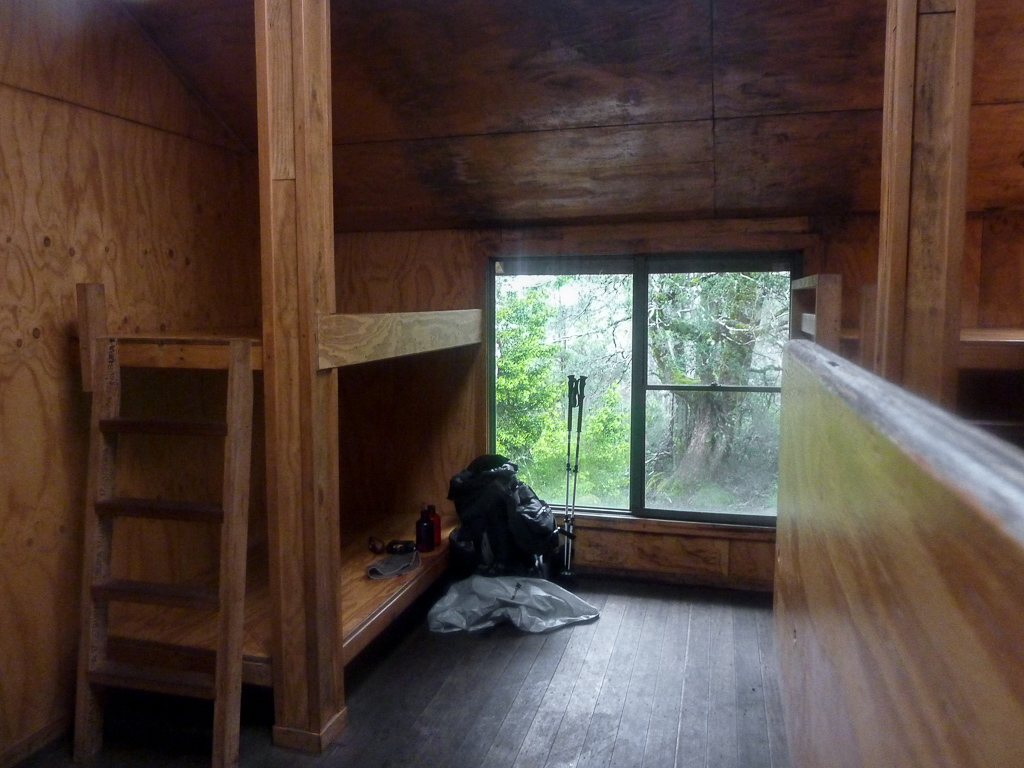 …and with the light fading it was time to head to bed and contemplate the next day of walking which would be a lot longer than what I’d bothered to do so far. 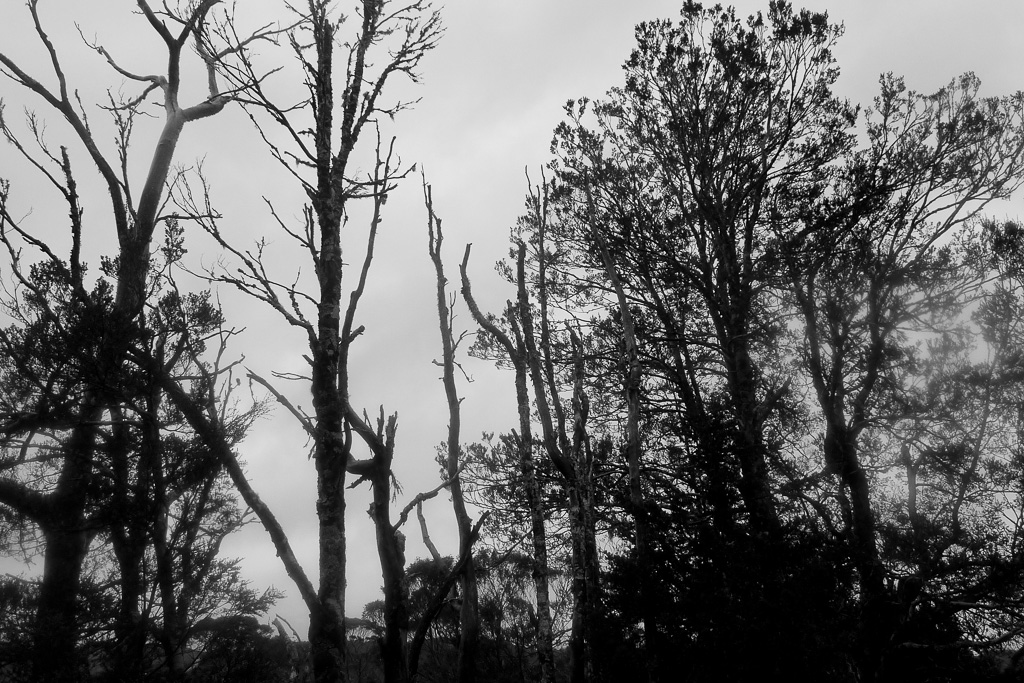