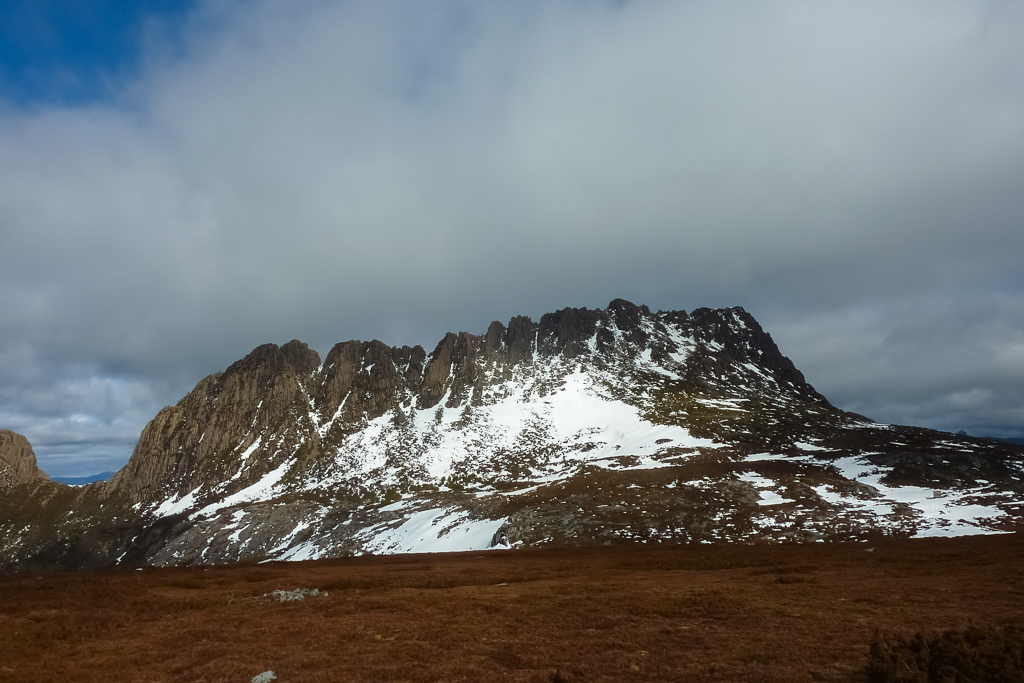 Times are tough when one has to drag out a walk from three years ago. I do have some dubious reasons for doing so, which I’ll explain for the purposes of padding out this particular post.

I walked the Tasmanian Overland Track on my own in September 2009, which was a year before I put the blog together. I’m actually sticking my neck out and say it’s the most recognised Australian hike? There was plenty of writing material on this trip and as the years go by, I’m starting to get a bit lost in the brain about it. If I can put it together now, just before Alzheimer’s kicks in next week, at least I’ll be able to look back at the posts and hopefully remember the hike, whilst drooling onto my bib whilst eating puréed fruit.

What else? Oh yeah, I’m still feeling out of sorts, so there’s not much walking going on. I think I’ve spent most of my time going to different doctors and entertaining myself with their strange phrases. You know those ones where the bloke wants to say something unsavoury, but dresses it up until it sounds stupid?

One doctor the other day asked me, “How do you evacuate your bowels?” Huh? How many ways are there? I thought the technique was pretty standard, but maybe not? I might have to slip down to the zoo and get some tips. I’ve seen Gorillas hurl their crap around, so that could be a different method I suppose? A lot of medical findings are named after the inventor, such as Heimlich and his ‘Maneuver’. Could there be some obscure German doctor called Dietrich (I really hope there is) who came up with an alternative method and called it the ‘Dietrich Dump’? Anyway, when I heard the phrase ‘evacuate your bowels’ I just envisioned paratroopers parachuting into Normandy in 1944. You know, “Red light is on. Prepare to evacuate!”

Back to hiking? Okay, do you realise I’ve done this walk twice? The second occasion is on the blog, but no one has read it. I was so pissed off, I’ve decided to enact my revenge and force feed this first trip down your throats. No matter where you look you’ll have the ‘Overland Track’ being slapped across your head.

That’s a lot of paragraphs. How about a photo? 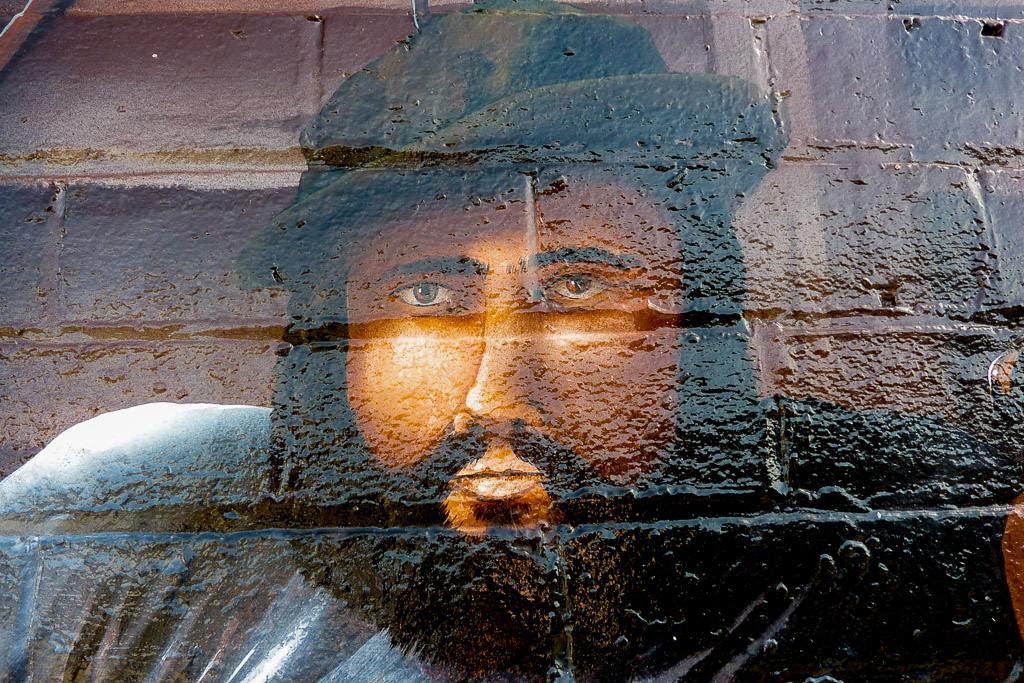 You didn’t expect that did you? The picture was taken in Tasmania on the way to Cradle Mountain, but I’m getting ahead of myself a little.

Being my first trip to Tasmania, I didn’t know what to expect. There are a million horror stories online about the weather, so I planned it big. As in packed really BIG. My walk was going to be the traditional method of starting at Cradle Mountain. Then walking south to Lake St. Clair, which is about 90 km in total. I allowed seven days, but due to the scary stories, I factored in a couple of extra. Just in case the shit hit the fan.

One bonus of going in September is I didn’t have to pay the track fee. At the time it only applied for the peak season between October and June for the peak season. During that period the walk has to be booked. I think the fee was about $160 back then and I just noticed on the Overland Track website it’s now $200. Ouch! If I was going to walk in Tasmania, I wanted to see some gnarly weather, so I was hoping for some snow as well.

It’s tricky organising these hikes, so I elected to fly into Launceston on a Sunday. Shop for most of my food and then head off to Cradle Mountain the following day. There’s a boat that can be booked to pick up hikers at the penultimate hut on Lake St. Clair. Taking the boat cuts off all the lake walking, which is about 15 km and also the Echo Point Hut. Boats don’t really turn me on, so I elected to walk all the way through to the end. Once finished, a bus was required to go to Hobart, before finally flying home. How crap are these ‘organization’ paragraphs? It sounds like gibberish if you’ve got no idea of what the Overland Track is. I’m sure it’ll make sense when I write it up. I hope. Anyway, I just know you want to look at another photo. How about this one? 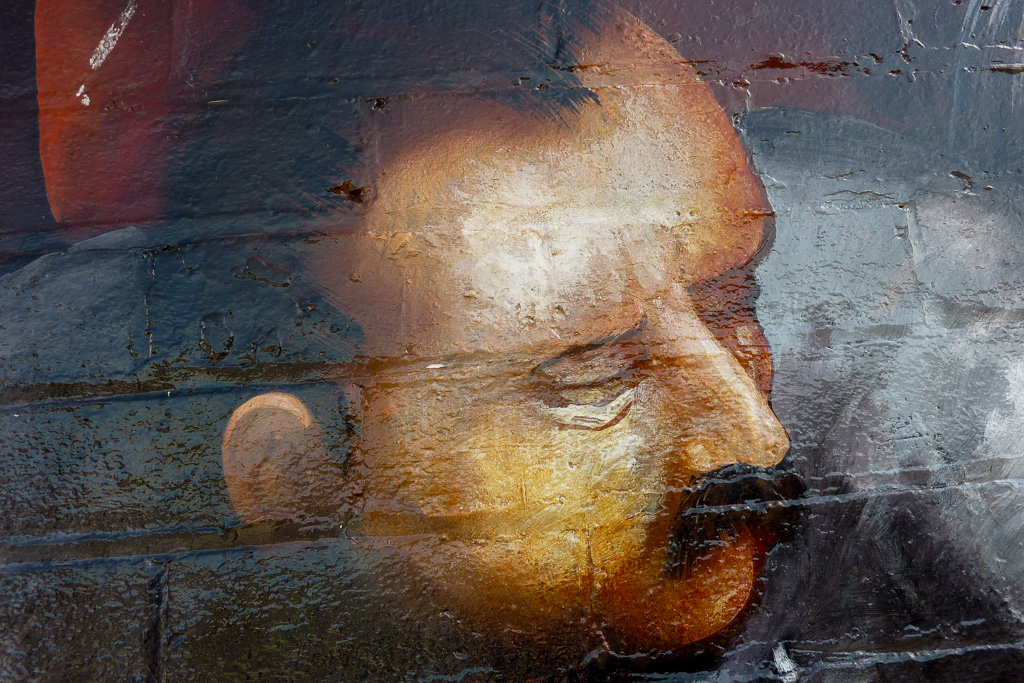 Not bad huh? I’ve one more organisational point, which is perfect if you’re an insomniac, as this will certainly put you into a coma. Transport. Yep, getting around as a solo walker in Tasmania can be painful. There are private operators, but they charge a fair bit and have requirements on the amount of passengers. One said they wouldn’t do the trip unless it had a minimum of six.

It’s 155 km from Launceston to Cradle Mountain and I was lucky to find McDermott’s Coaches who would pick me up from my hotel. Then go directly to Cradle Mountain with a lunch stop at Sheffield for only $50. What? I couldn’t find a better mob to get me to the walk, as there was no dicking around at all. So, I’ve got a tip. If anyone tells you it’ll cost a minimum of $100 to get from Launceston to Cradle Mountain then I can suggest only one thing. Head to the cutlery drawern, pull out all your sharpest knives and hurl them at the forehead of the person telling you this. If you’re lucky, at least a couple should stick.

Oh yeah, by the way, there’s no walking in this post. It’s just an appetiser (one that tastes like crap, but that’s the way it goes). I couldn’t include the first days walk and all the crap I’ve already written about in the one post. Picture? 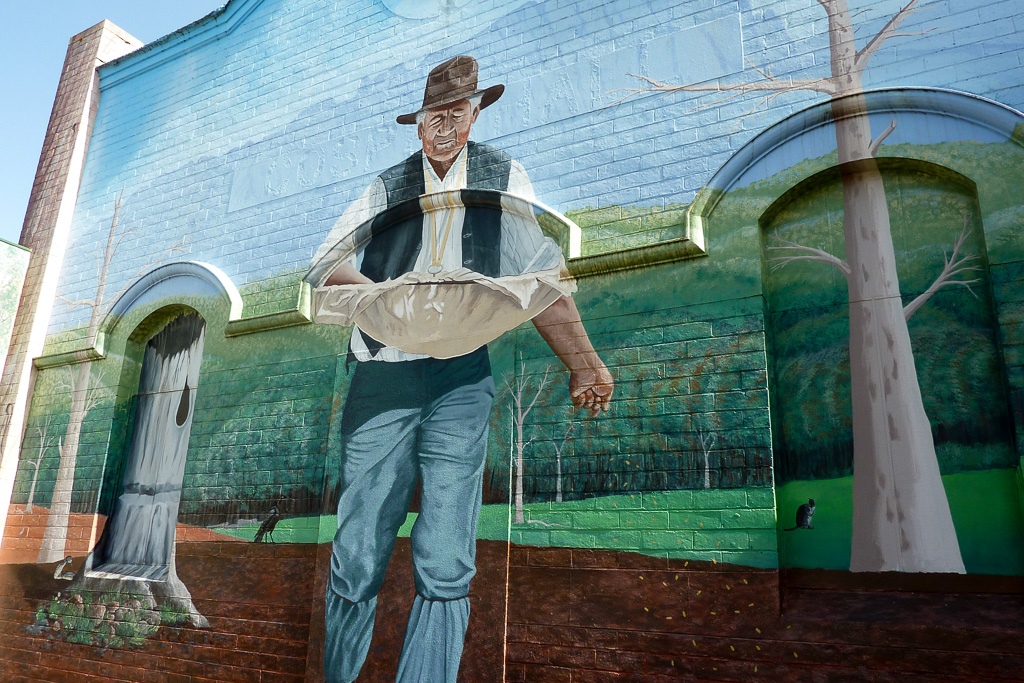 Check out that bloke. He’s getting the job done. Now, I flew into Tasmania with the heaviest backpack in the history of the universe. Virgin Airlines have a 21 kg limit and I remember scraping in at around 20 kg. Oh yeah, that didn’t include my fuel and a bit of food. I’m not sure what I was thinking, but it felt as if a small European car was on my back. I was toting that beastly Sea to Summit/Wilderness Equipment Karijini backpack  which has a meagre 95 litres capacity and weighs in at roughly 25 tonnes. I’m not joking, but if there was a nuclear strike on Melbourne, the only thing you’ll find in the western suburbs is the pack untouched amongst the smoking debris.

Don’t forget, I also had to carry the crap that was needed for the end of the hike, such as a phone charger, camera charger and hair products. Actually, although I took a few photos there are nowhere as many as I would take today. The problem was I’d just bought the Panasonic Lumix TZ-7 and only had two batteries to last a week. Spare batteries were over a hundred dollars and there were no generic ones at the time. $100 a battery? Up yours Panasonic! So, it was JPEG’s all the way, which on reflection makes me feel a little queasy. Now it’s, ‘Give me RAW or give me death! Or sugar”.

Okay, that’s enough rubbish about the preparation. If I’m enthused I’ll recreate the crap I took at the end of the hike as its own post. You’ll not believe the items I lugged for the week. I mean that as well.

The bus trip was very comfortable as there were only a handful of people on it which saved me from being sociable. I guess I should mention the photos throughout this post. They were taken in the town of Sheffield. Some seem a little bit kitsch, but I was intrigued by this individual. Judging by the look on his face I think some LSD might have been in the catnip. 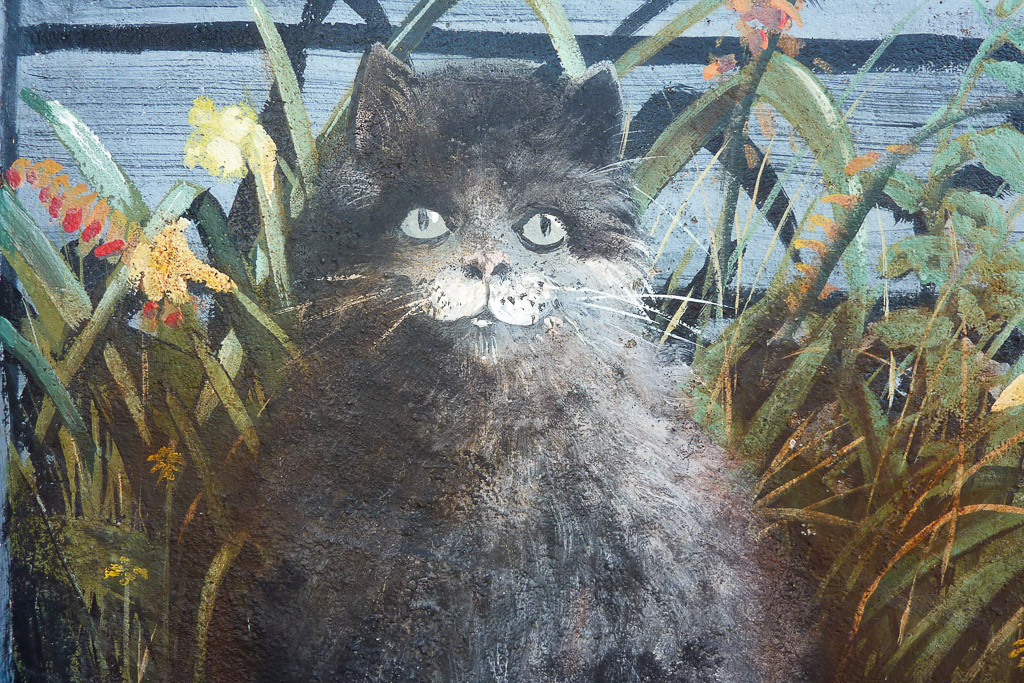 There was a matching dog as well who appeared to be Valium addicted. 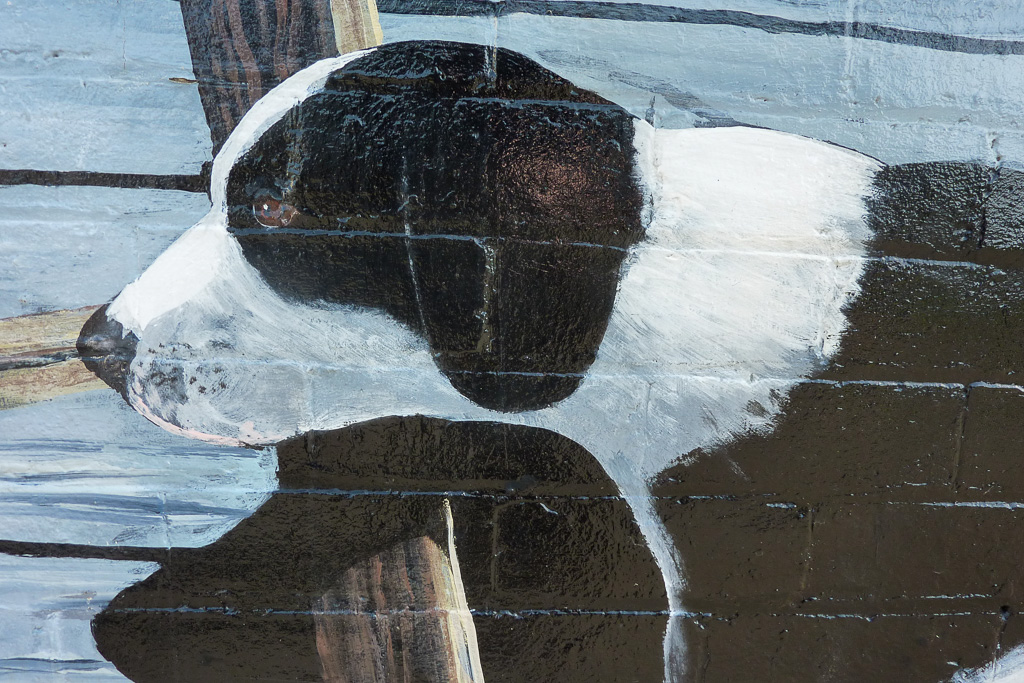 After the Sheffield stop I promptly fell asleep and was awoken by the bus driver kicking my leg saying, “Mate, you’ve got some walking to do!” I assume we’d arrived at Cradle Mountain, rather than him randomly throwing me out the bus on the side of the highway.

I picked up the small European car I’d carry on my back for a week or so and then waddled to the Parks office. Before going anywhere, I had to clock on by purchasing a mandatory Tasmanian Parks Pass. By this time it was past 12 pm and I entered the Parks building to find the power was out. The staff were telling me the previous days weather was so severe that power was cut by falling trees and a substantial dump (snow, not Dietrich) had fallen up at Cradle Mountain.

“No worries”, I was thinking until I spoke to a Parks member. She appeared to be either wearing a burqa or was really cold due to lack of power. My plan for the first day was to walk to Waterfall Valley Hut. That’s the standard first days walk until she said there was no way I would make it there before sunset due to the snow. Her suggestion was to stay at Cradle Mountain overnight and start early the next day.

I wasn’t keen on that idea as I would have lost one of my spare days before I’d even started, so I elected to go. Finally, as an idea, she suggested I should only go as far as Kitchen Hut (which is an emergency shelter only) and stay the night there. So, that was the plan. Before leaving I lashed out and rented a Personal Locator Beacon (PLB) GME 410G, which seemed good peace of mind for a half-baked solo walker like me.

That was it then. I jumped on a shuttle bus that took me to the start of the walk at Ronny Creek and hopped off to see Cradle Mountain up ahead covered in snow. I guess I was about to get my ‘snow wish’ nice and early. It was time to get going, but that’s for another post.

Don’t panic, I won’t write them all up one after the other, as I should be able to get outdoors for strolls soon as long as the doctor is happy with my ‘evacuation’ method. It’s actually quite refreshing looking back at these pictures, although I noticed I took way too many ‘tourist’ style shots. The next few posts will be a lot more entertaining just for the story of a dead-set lunatic I met up near Cradle Mountain who redefined the words, ‘ball-breaker’. 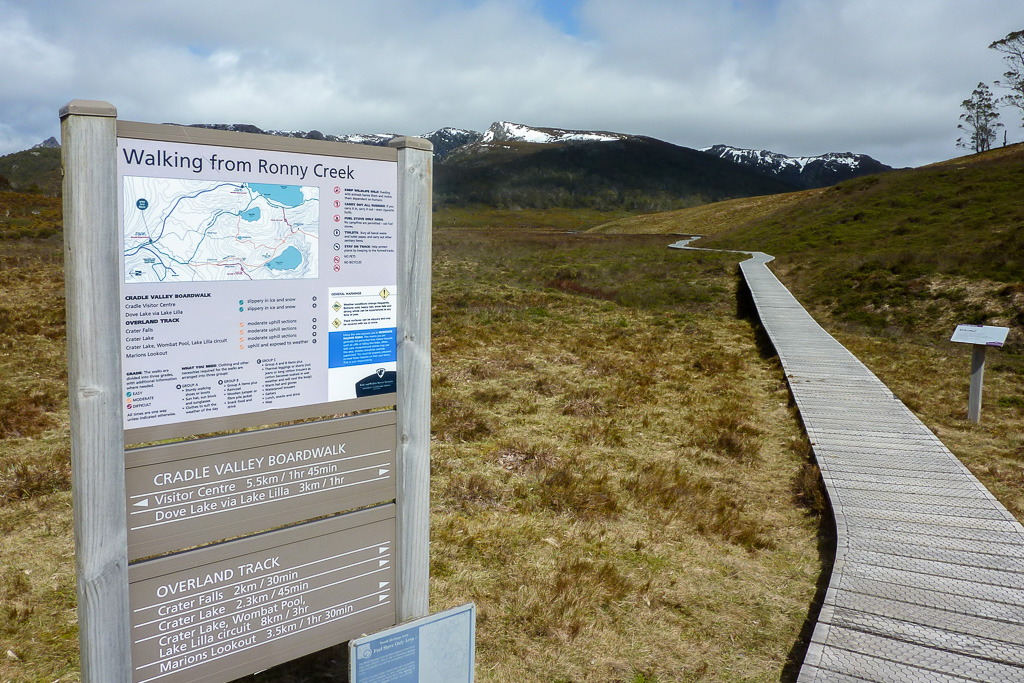 The start of the Overland Track at Ronny Creek

NB – 2016 – After some blog tinkering, I found these old posts. I figured as this is the opening account of my Overland trip, it would make sense to add links to all the particular days of the walk that are on the blog. If you’re interested in the full saga of the hike, then I think it’ll be a lot easier to find them in the one spot.