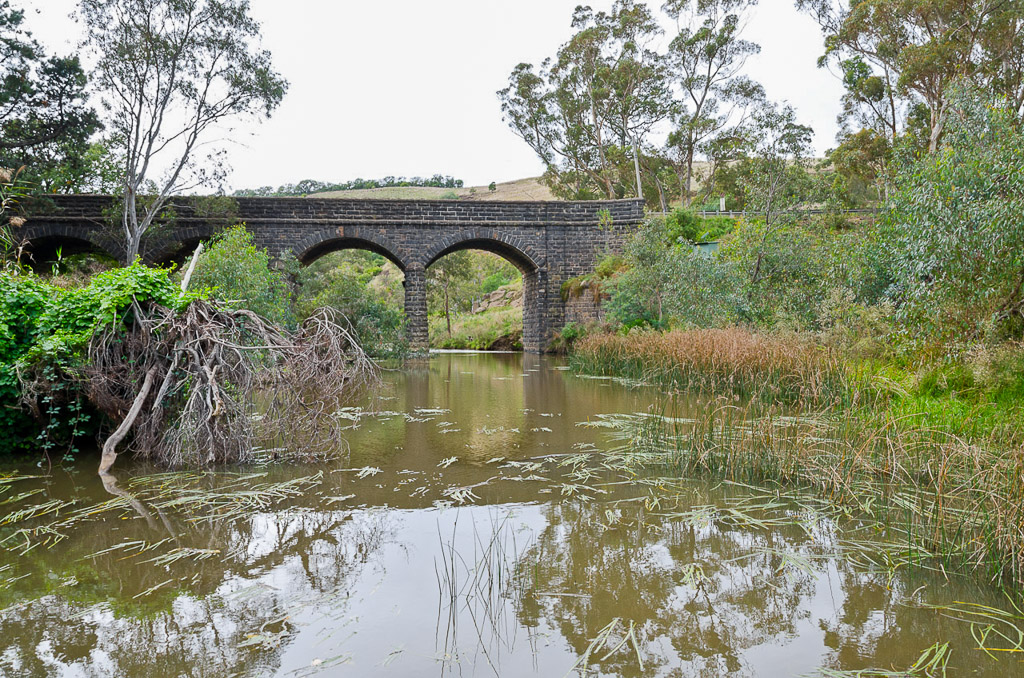 You better believe it. This is a post about Bulla Bridge, Bulla. Are you excited? I do like to live on the edge a little, but there’s a valid reason for such a mundane entry. In order to get to the reason for this post I’ve got to go back a bit and talk about vomit.

Now, a few weeks back I came down with some sort of virus that for some reason decided to get better at an infernally slow pace. I am pleased to say that to go with the virus I managed to come down with an eternal headache. How about a headache which lasts two weeks?

Yep, and it culminated a few days ago to the point where I woke up in the morning with a stinker. Okay, “It’ll get better after breakfast” was the theory as I made some porridge and a cup of tea. With one mouthful I was suddenly sprinting with knees lifted high and arms pumping as I jumped on board the porcelain bus.

I can say this was my first non-alcohol induced vomit ever (any under five years of age don’t count). Porridge of all things broke my long standing chunder record. Do you realise the last time I was physically sick was August 1999? That was in New Zealand whilst on a ‘skiing’ trip. Mm… That was overseas wasn’t it? This means my national record goes back before 1999.

I’ve made a million trips to the doctor (yes, one million) and I was told this enlightening advice, “You are sick with a virus and it might take up eight weeks to get some energy back.” What? Eight weeks?! I’ve got to do a hiking blog!  It’s been three weeks of feeling constantly fatigued and out of breath, which is not the greatest feeling when I’m meant to be walking so I can write a post. If this keeps up I’m changing the blog name to www.fatmanonthecouch.com.

So, whilst feeling wrecked I’ve spent some time at home and I pulled out some ‘ye olde’ photo albums for something to do. In one of the albums my mum used to meticulously keep, I found the following picture. It was taken in 1963 and features my brother and sister sitting on grass with a caption of ‘At Bulla’. 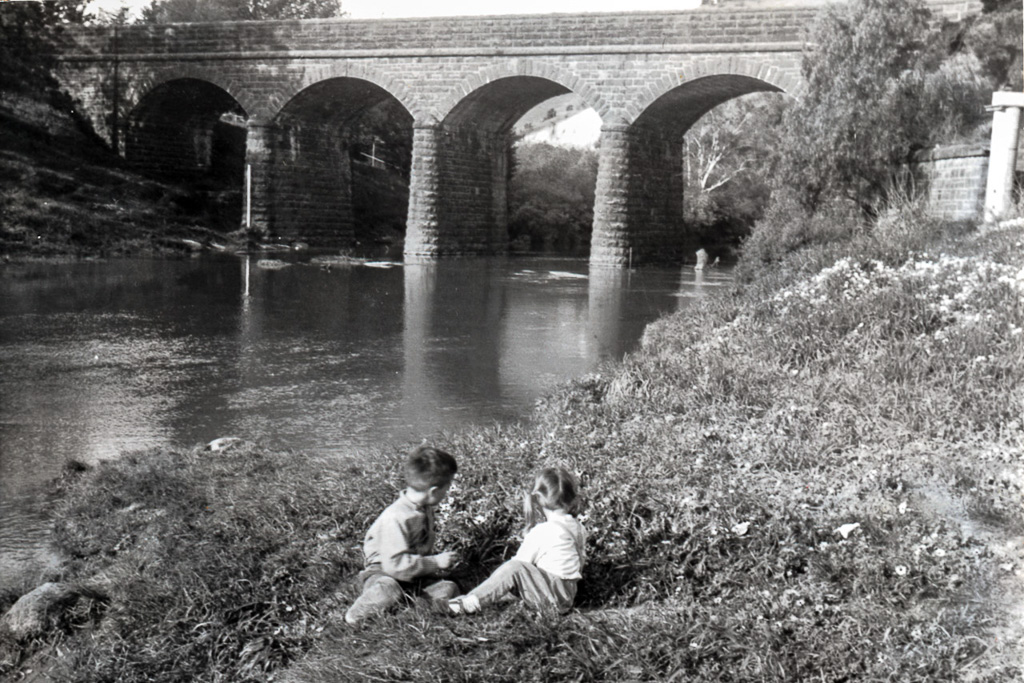 ‘At Bulla’? I wondered where this spot was and I was intrigued by the bridge in the background. I do love a historic bridge, so I hit Google and managed to track it down within 0.7 of a second. Phew. If it took anything up to 10 seconds, I would have abandoned the search.

In my near-death state, I figured visiting this spot to take a ‘then and now’ photo would be achievable and even more so as it’s only 20 km from where I live. There was the slightly tricky problem of which side of the bridge the photo was taken from, but I guessed the wall on the right of the photo would be my guide once I saw it in the flesh.

It just happened the one day I decided to head off for this trip it rained heavily all day. This meant the photos would be pretty bland with a white overcast sky killing the pictures. Oh well.

Before heading off, I had more research to do. The historic Bulla Bridge was built in 1869 by bluestone which was made by convict labour. With that sort of history I wanted to have a look at some older photos, so I headed over to the State Library of Victoria which is a great resource. Look what I found. 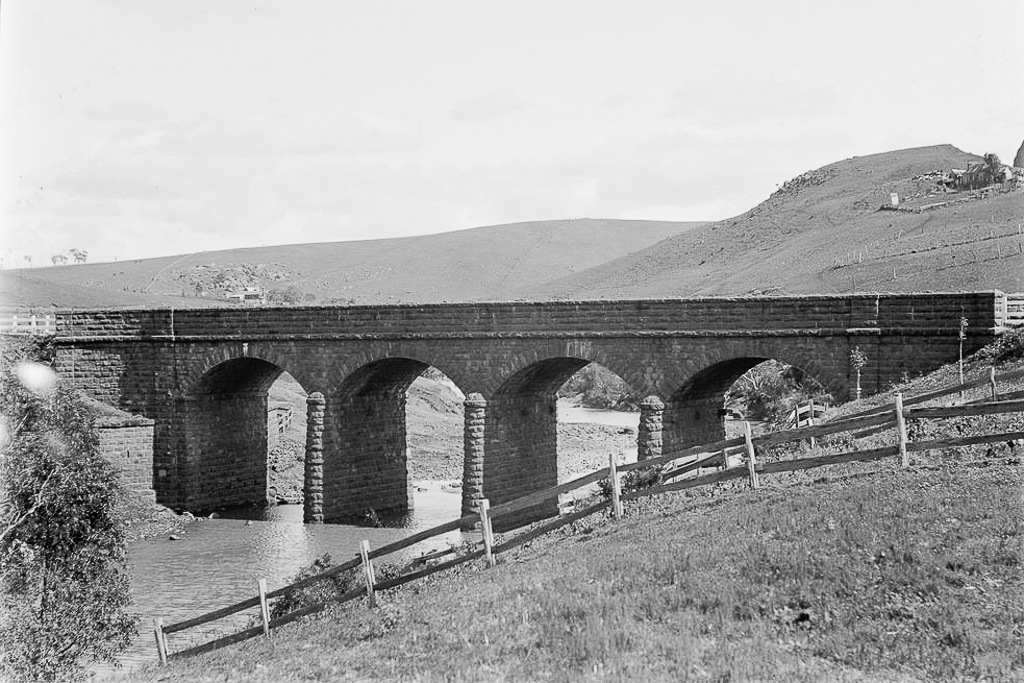 There it is again. As there’s no wall on the right, I was pretty confident the picture was taken on the opposite side of where my mum took hers. What else was in the State Library of Victoria archives? How about this one? 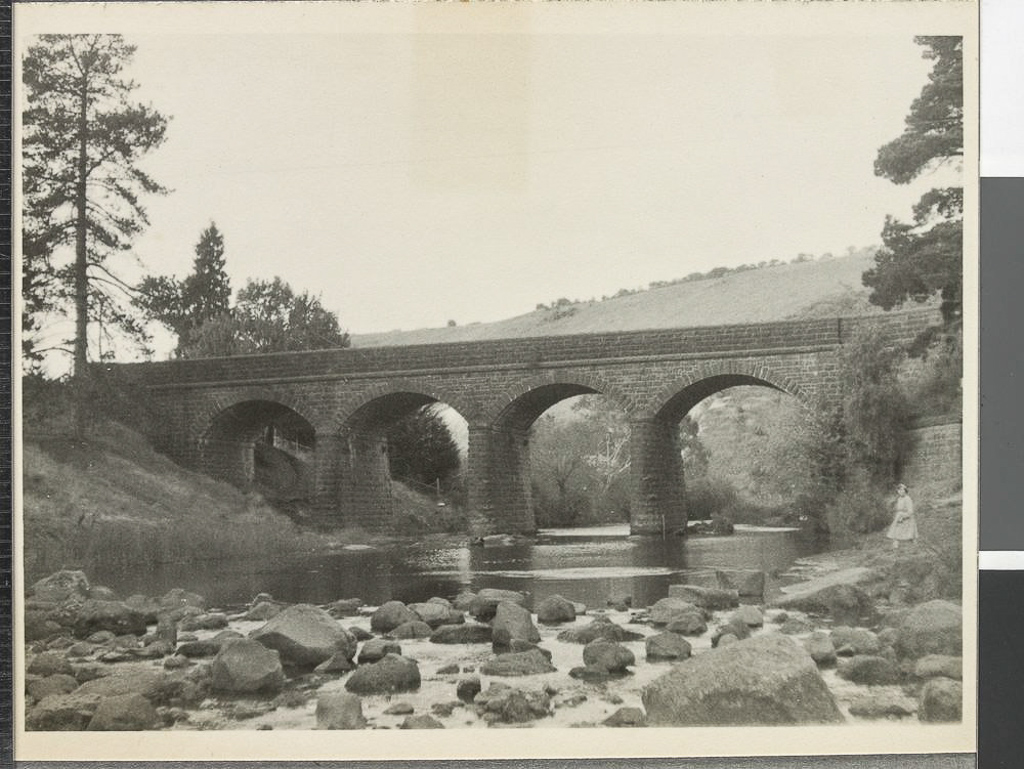 This isn’t much older than mums photo, but with the wall on the right behind the ghost, I was pretty confident it was taken in the same direction. This photo is still under copyright, so I’ve left it as it was downloaded, rather than cropping the edges like I’d normally do.

I really should stop talking about the bridge and just visit it shouldn’t I? I headed off and somehow was there within 30 minutes. Now, this is where the problems begin. I assume by my mums picture, they visited the area on a day trip, as it was probably a nice place to spend a day. Lounging on the grass besides the creek looked pretty relaxing.

Well, things have changed in 40 years, as access to the bridge is non-existent. If you happen to live in Bulla it would be okay as you can walk there, but not when arriving by car. I ended up parking on the side of the road and then braved the traffic which I noted was a little heavy. How heavy? In my Googling, I found an article, which noted the bridge is at risk due to 25,000 vehicles driving over it every day. Every day? That sounds like a lot to me?

Well, time to investigate. I started out on the wrong side, but it was the easiest way to get down to Deep Creek. You’re hanging out to see some bridge photos aren’t you?! 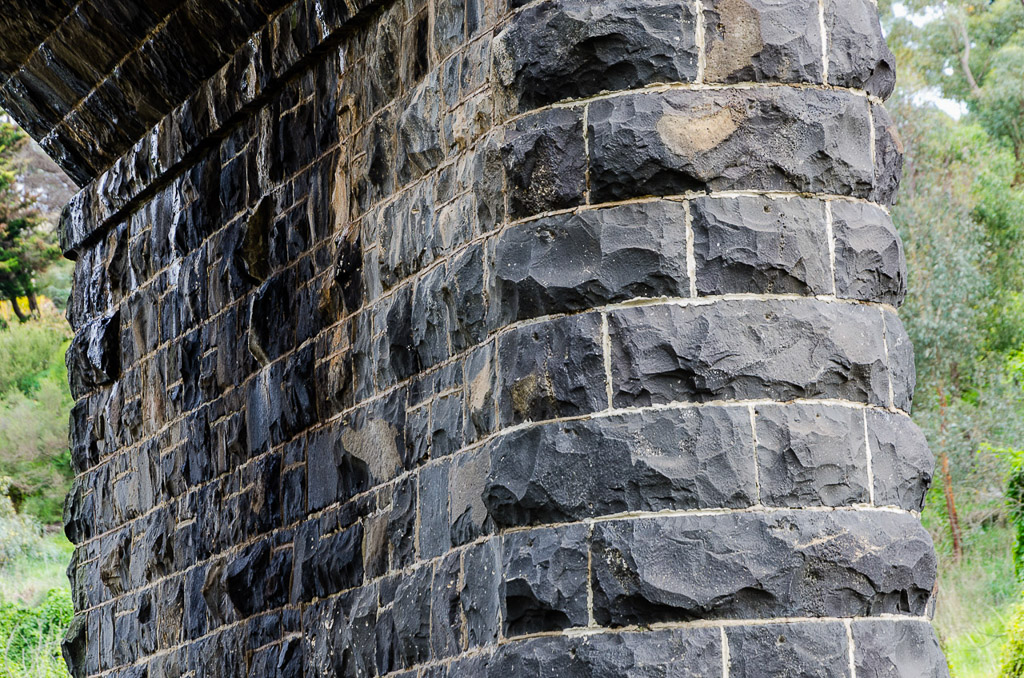 Mmm… check out the bluestone. Feeling aroused? I thought I’d go for a stroll up the creek to avoid the NOISE OF THE BLOODY TRAFFIC. There were some nice shots further away, but I would have liked a sky with some actual colour in it. 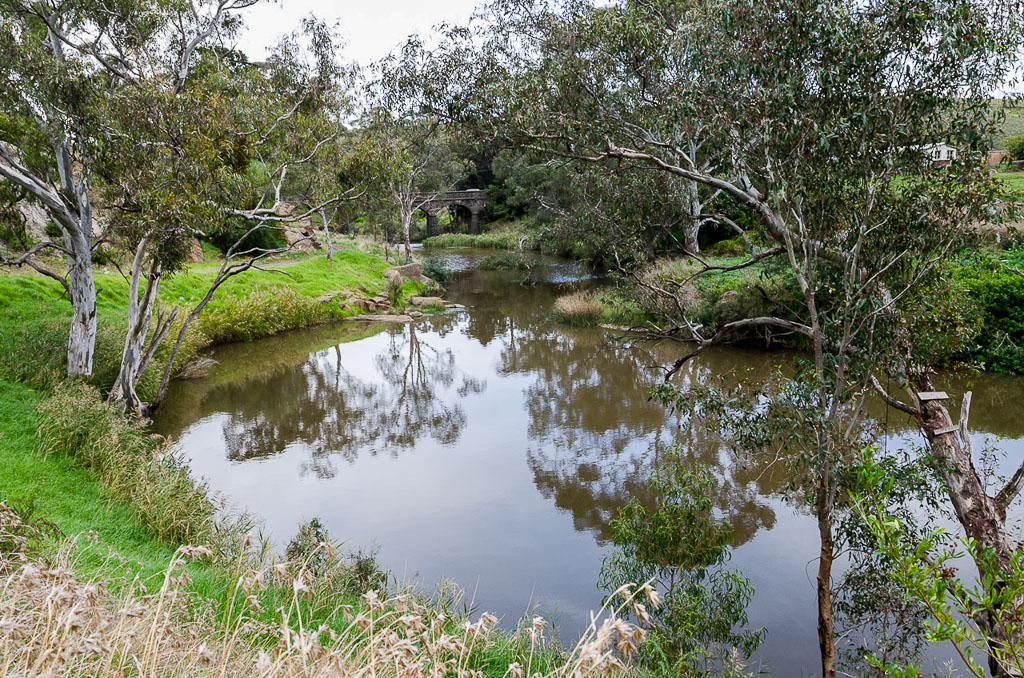 Deep Creek with Bulla Bridge in the background.

It looks really peaceful doesn’t it? It may look isolated, but a zillion cars were driving over the bridge a few hundred metres away. 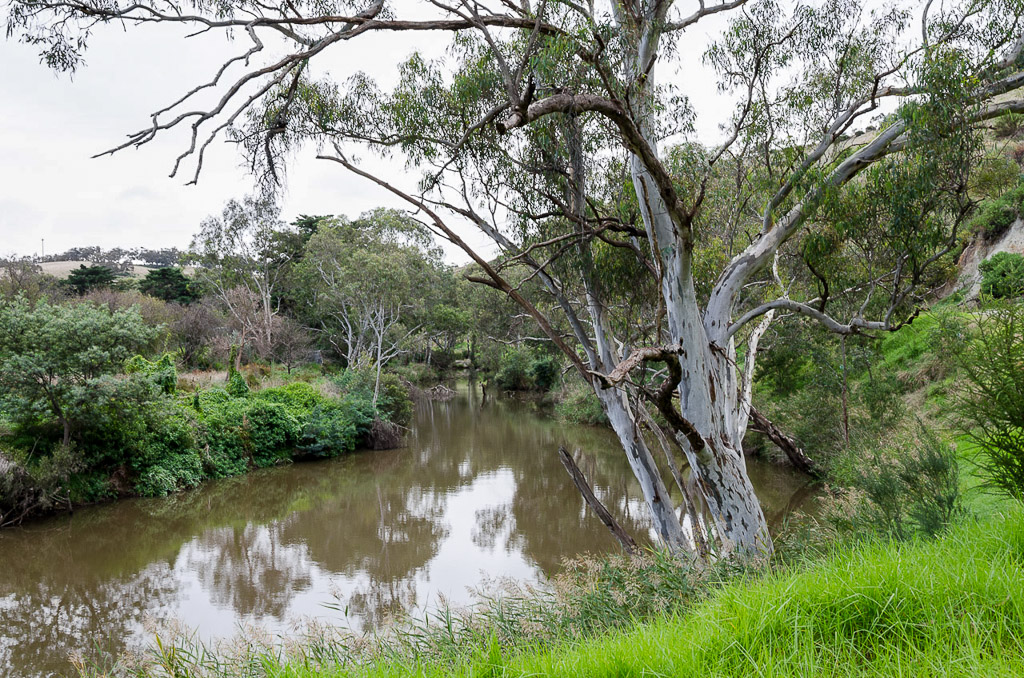 This side of the bridge looked interesting and worthy of a longer look around, but it was raining the whole time and I had no mojo for exploring.

I headed back and braved crossing the road, which involved a sprint to avoid being squashed. Now was the time to investigate my ‘then and now’ photo. You know what? I found the small wall in the older photos, but it’s now accompanied with some ‘big green thing’. 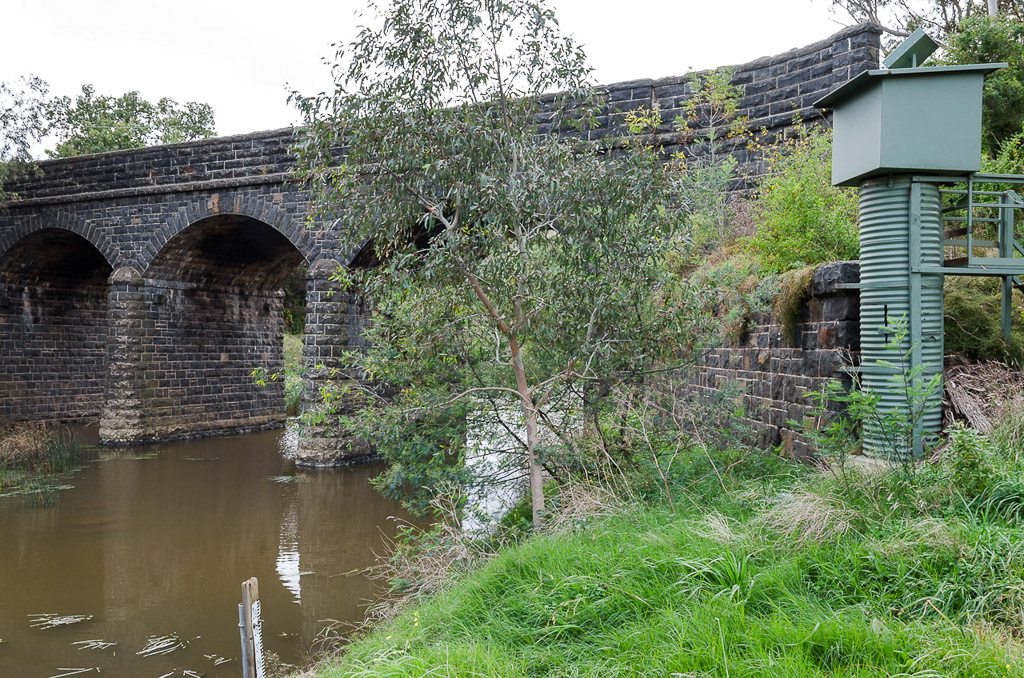 Okay, now to line up the photo, which will be the same as mums. There was a slight problem though, as the nice grass which my brother and sister are sitting on doesn’t exist any more. It’s now weeds and trees which are about 20 feet high. Mm… This trip wasn’t working out to plan, as I couldn’t get close enough to do my comparison. This is the best I could do. 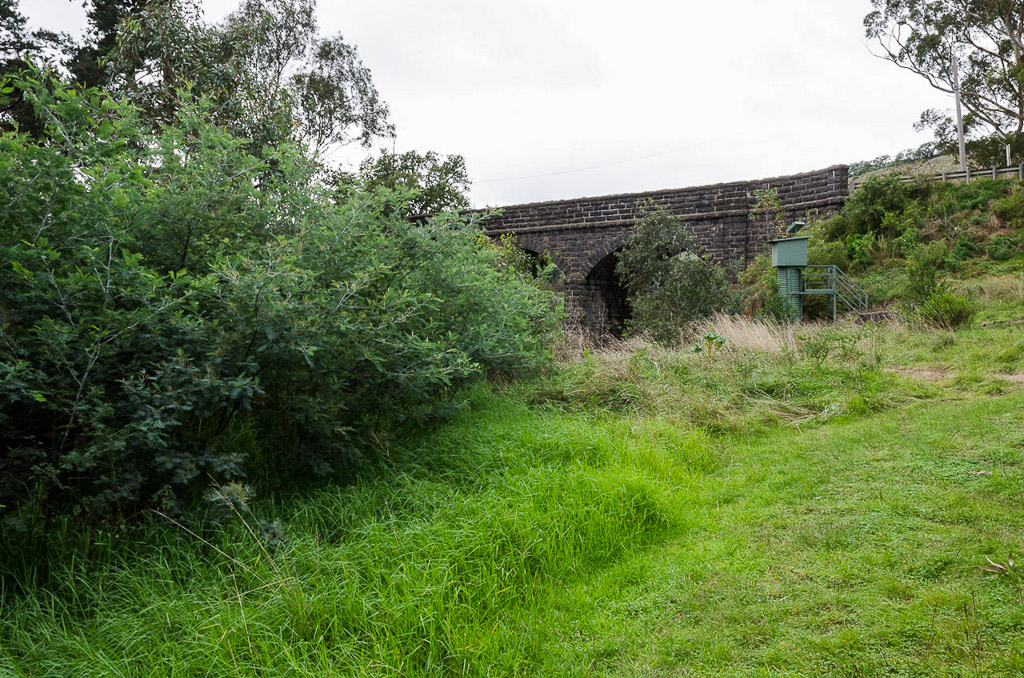 Do you now see what my problem was? A slight increase in vegetation over the last 40 years killed my photo ambitions. I still had a bit more exploring to do and thought I’d investigate the rocky part of the creek which is visible in the Colin Caldwell photo earlier in the post. Guess what? Well, that doesn’t really exist, as I bush bashed to the creek and found a concrete slab where the rocks used to be. Check out some concrete. 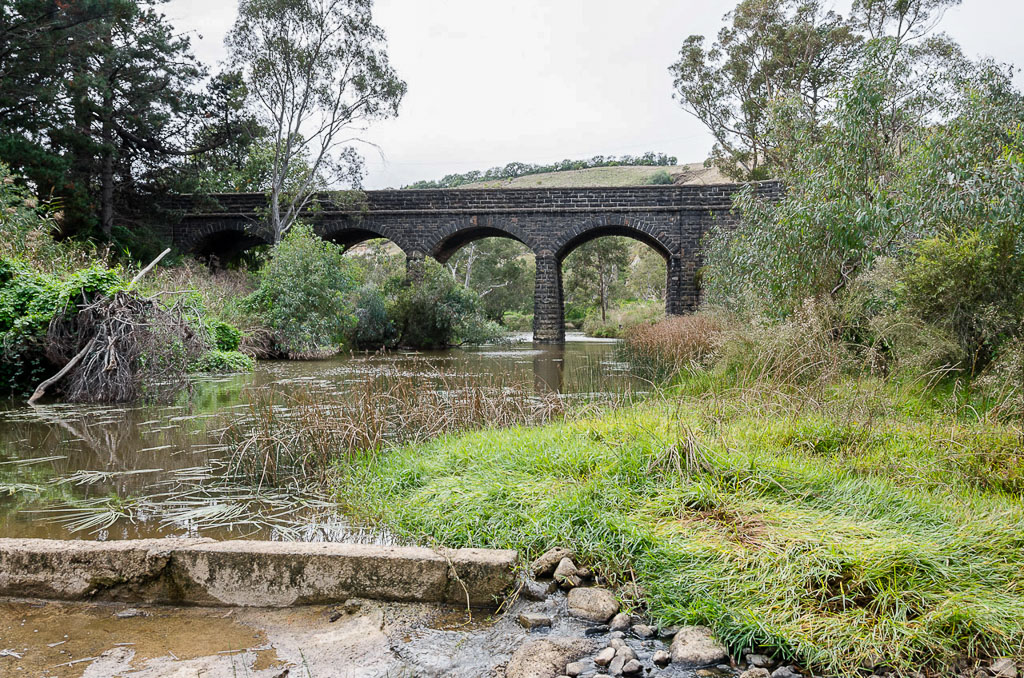 Is this the most disappointing post ever? I thought I’d stand in the middle of the concrete patch and take a few photos. Have a look at my feet. They’re getting wet. 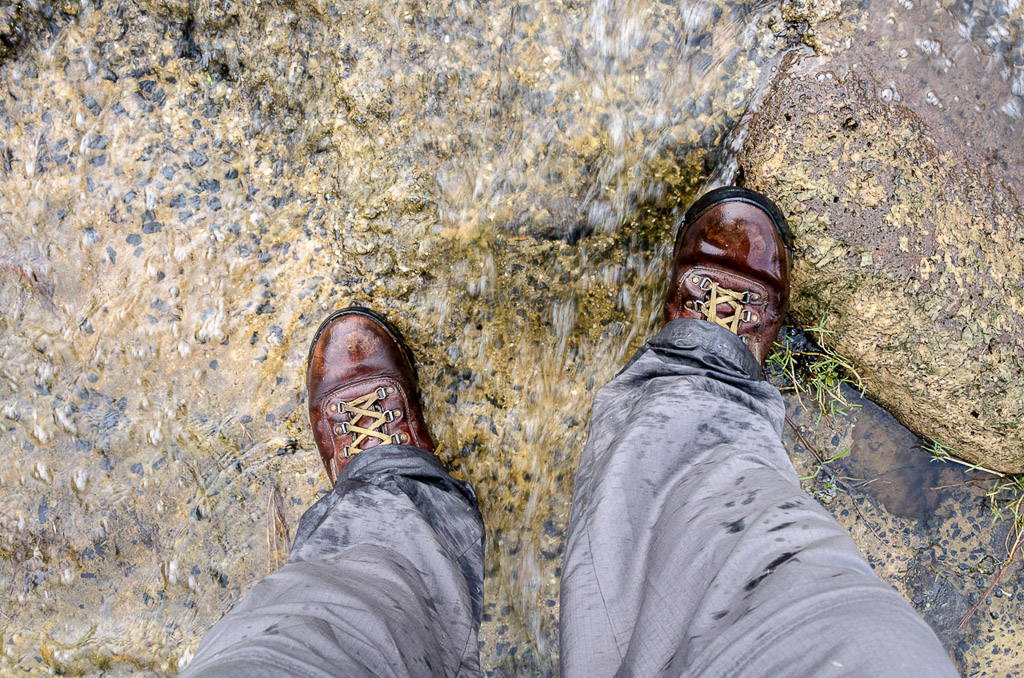 What can I say? The whole idea fell apart a little, but I did see the bridge and got wet in the process. I thought I’d throw in the towel and head off. On my way back to my car I saw a cap on the ground which I thought said, ‘Nikon’. “Hey, I’ve got a Nikon! That’s my hat!” This was great, until I had a closer look and it actually says ‘Nixon’. 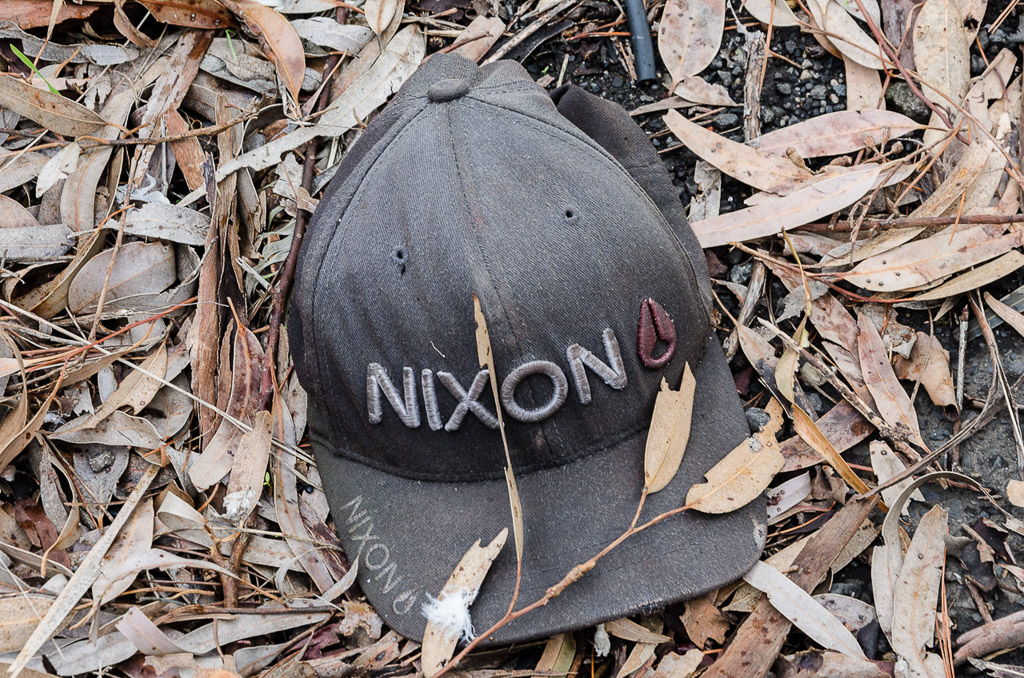 It might have been the ex-presidents hat, but I lost interest once I saw the correct spelling. I braved the traffic again and made it to the car alive, but this isn’t where the post ends.

On the way home I thought I’d have a look at the tiny Holden Bridge on the Bulla-Diggers Rest Road. Whilst strolling there I came across a Canon lens cap on the side of the road. How did it get there? Oh well, spare caps are always handy. 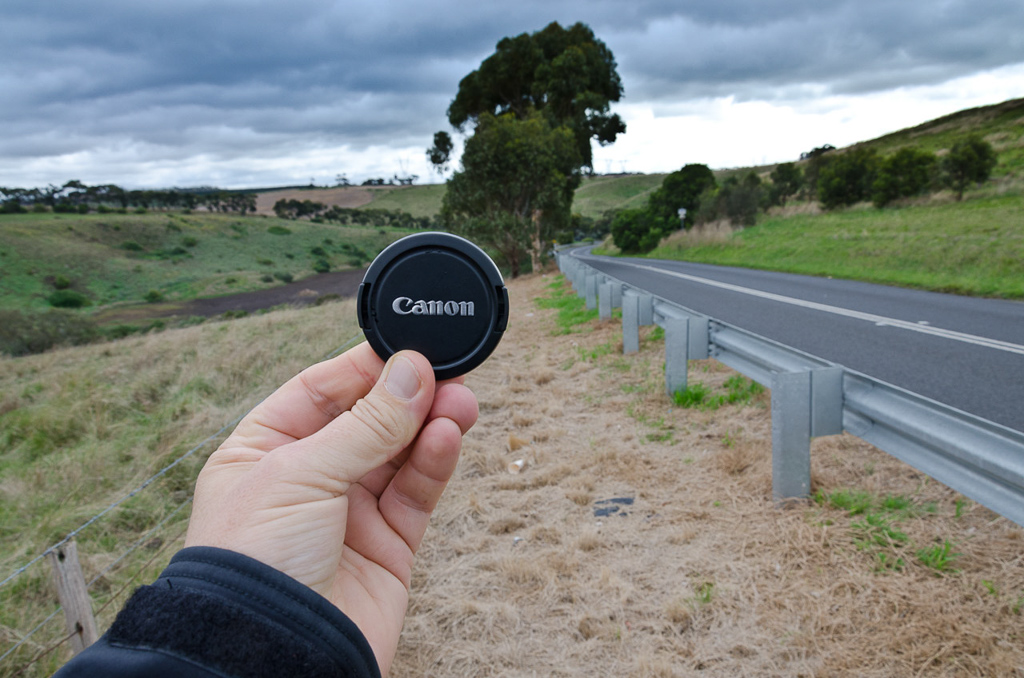 Now Holden Bridge is rubbish, but I was more interested in having a look at Jacksons Creek which of course has its own Wikipedia page. Apparently trout used to be released in the creek by Fisheries Victoria up until 1990. I’m not sure what I was expecting, but it didn’t enthuse me too much. There was a ford across the creek, which was part of the road before the bridge was built and this was the most exciting aspect of the whole area. 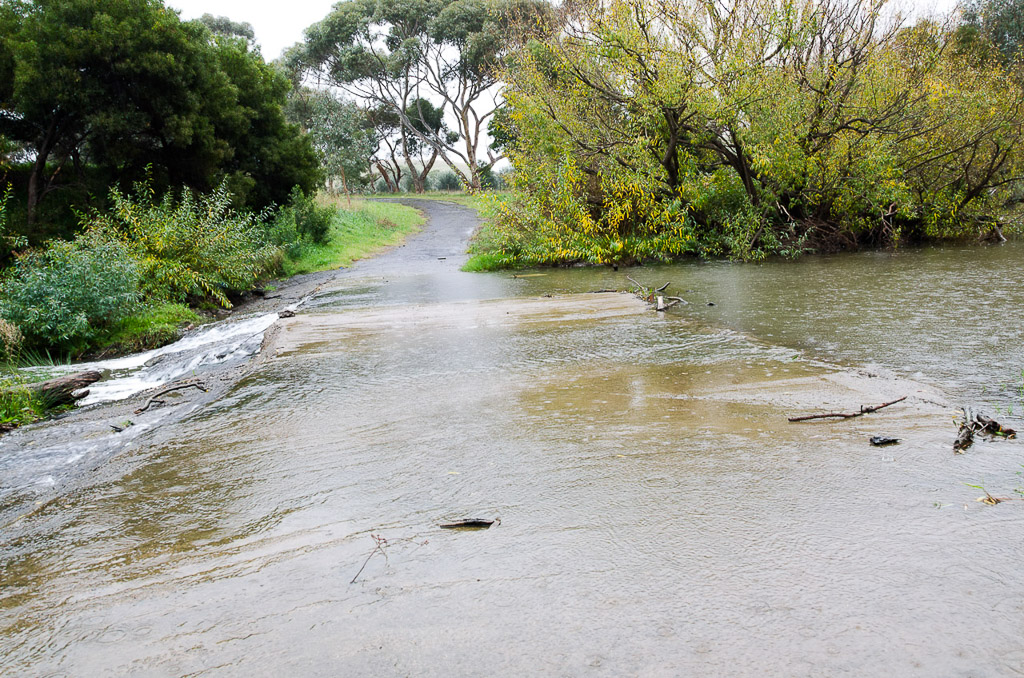 Pretty exciting huh? This is action aplenty for me considering what’s been happening the last three weeks. I spotted something in the water that was worth investigating. Strolling across the ford, what I found was self-explanatory. 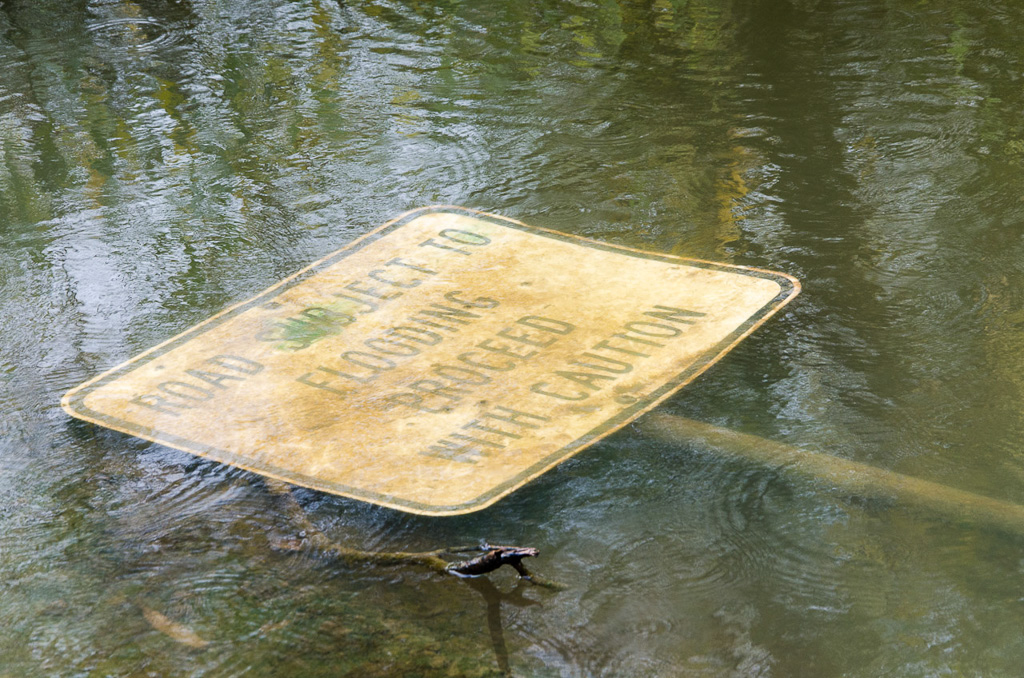 I stood around for a little while and wondered, “What the hell am I doing here?” It was time to head off. I recrossed the ford whilst taking a photo which shows the dedication I apply to the blog. Look I’m getting my feet wet. 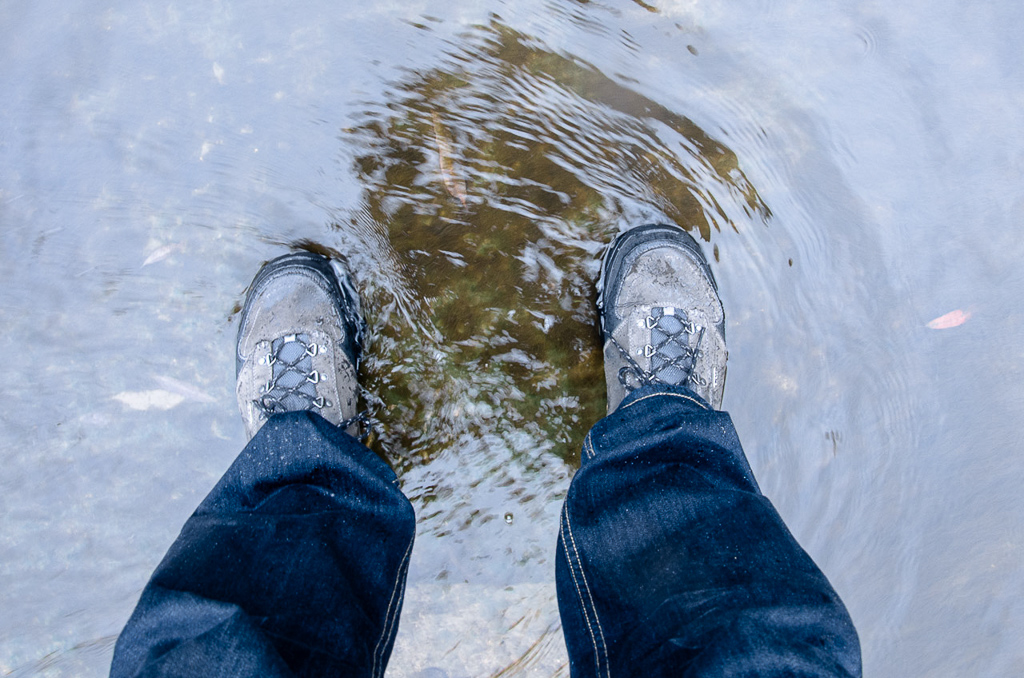 Now, do you notice what’s different in this photo compared to my earlier ‘walking in water’ shot. Well, I’ll tell you if you couldn’t be bothered scrolling back up. I’m wearing different pants and shoes. It’s always advisable to carry a different set of clothes in the car, just in case some government agents want to conduct some surveillance. Hop in the car and jump out again in some new clobber. Pretty cool?

What can I say? This has been a pretty low speed post. What about some GPS readings like I usually add to the end of every walk? Probably not on this occasion, as I think the total distance walked was approximately 300 metres.

A couple more things (surely not?). I’ve noticed I’m doing quite a few ‘smiley faces’ (one of these things :)) lately in texting and, well, everywhere. It may offend some people who want correct grammar, but I’m making a stand for the ‘smiley face’. Considering we don’t speak to people any more, how can we express the intent and context of a message? As an example, if I sent an SMS saying, “FUCK YOU!!!!!”, the meaning is a lot different if I used, “Fuck you” :). See what I mean? Totally different, so the smiley face is in.

By the way, you’d better buckle your seat belts as I’ve got plenty more ‘then and now’ pictures from old photo albums to contemplate. This particular visit was pretty much a ‘picture comparison fiasco’. It’s interesting how times have changed, as I can’t think of any occasion I want to go back and sit by the banks of Deep Creek like my family did 40 years ago.

Hey, who likes playing Scrabble? I’ve been competitive with it in the past and years ago I’d play ‘Combat Scrabble’ with my brother. If I was starting to get on top he’d grasp the board with both hands and hurl it into the air. This would be the cue to attack each other.

I’m not lying, but I reckon my brother was the worst Scrabble cheat in history. If he was getting stuck, the rules would change and suddenly names, slang and freestyle Latin were allowed. It was tough to notch up a win and the main thing I learnt is the letter ‘q’ sucks. Not any more, as I’ve warmed to it, by finding a better use of that beast of a letter. 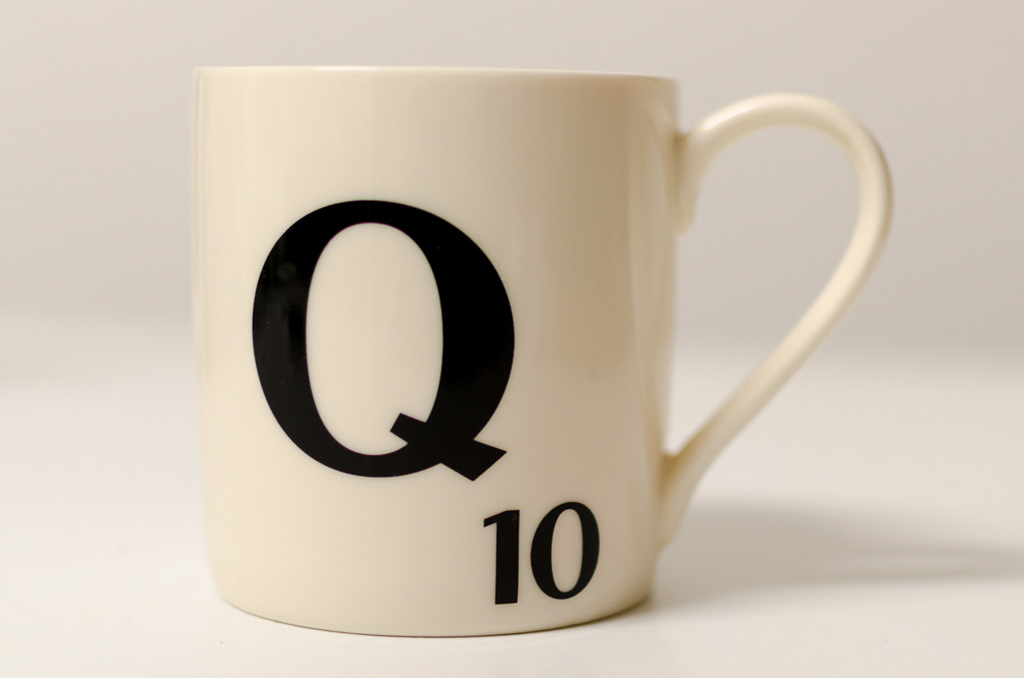