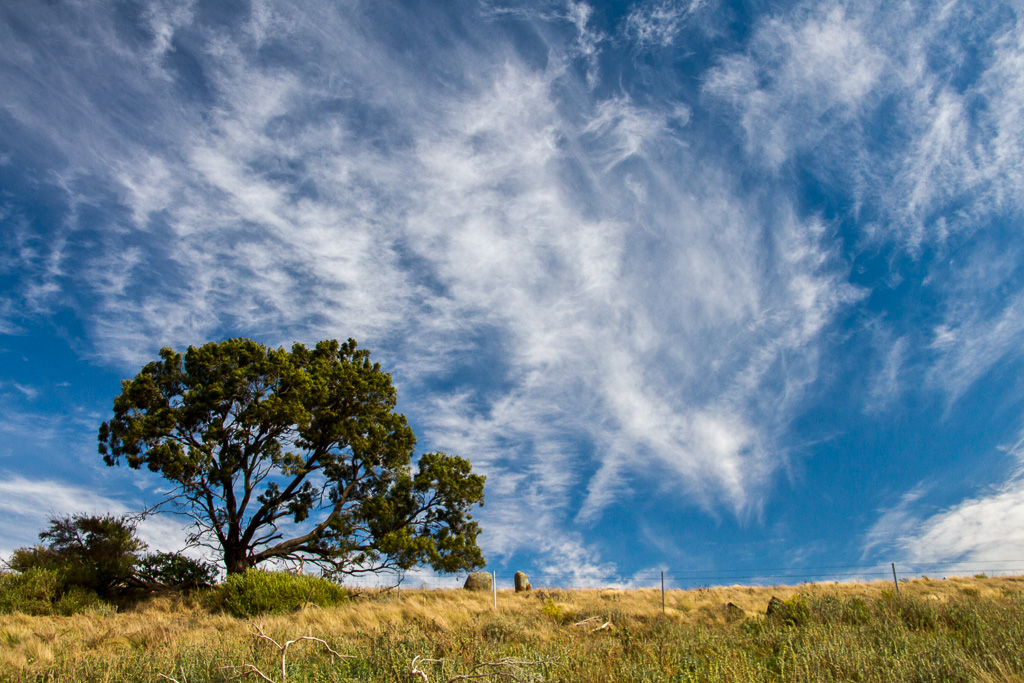 I will start by mentioning this post is my own personal opinion and I think I should mention this nice and early. I really expected this walk to have some pizzazz. Is it sacrilege to say the Ingliston Granites Walk, Werribee Gorge is a bit anti-climatic?

Before you granite lovers leap off the couch in rage and hurl your Doritos in the air, just remember it could have been me having a bad day, so maybe it’s not such a let down as I make out. It’s mentioned in a couple of hiking books I have, so I was expecting some zing, but I think some wacky weed got slipped into the hookahs those authors were smoking.

Anyway, this is the last walk in the Werribee Gorge Park I hadn’t been to before. On a sunny Saturday I headed out in the car and noted on the way the wind was howling. I’d checked the Bureau of Meteorology website before I left and noted they’d issued a ‘toupée alert’, so I made sure to put on double the tape to prevent a ‘rogue rug’ incident.

The initial part of this walk is to head to Falcons Lookout, which I’d been to before and then to make may way to the granites. Besides, I was also hoping to see a large number 18 as well, as I hadn’t seen one for a while. They’re a pretty rare occurrence these days.

After parking the car, I was off and racing on a steady downhill track leading into Ironbark Gorge. I passed a couple of railway workers huts that are needing a bit of a spruce up. As the photo shows, a bit of work and they’ll be looking pretty good in no time. 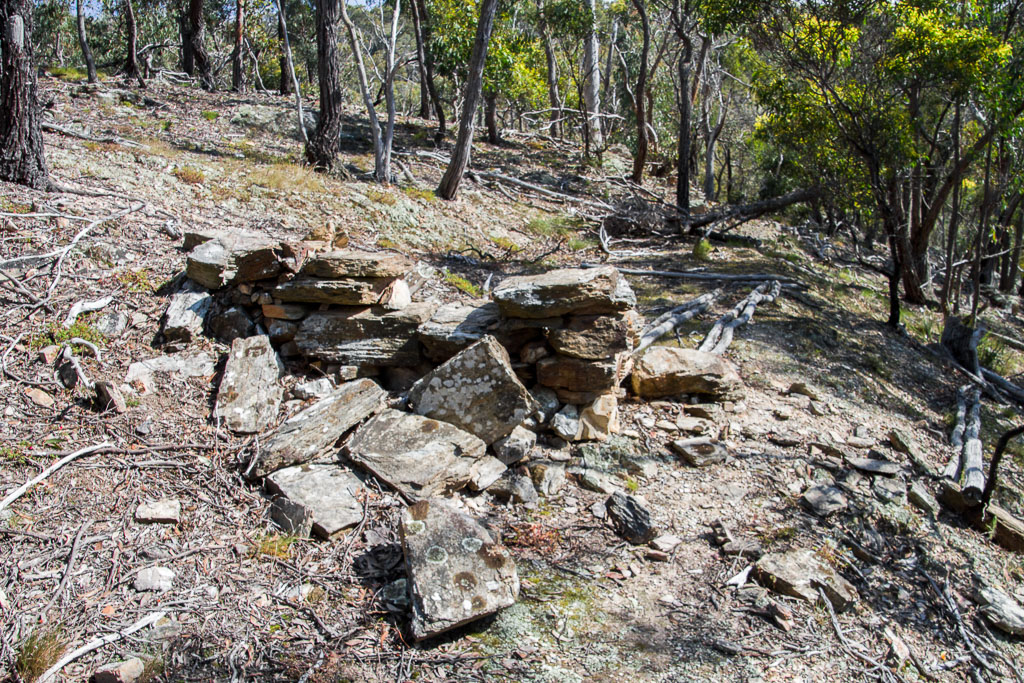 Although the wind was blowing quite strongly it was quite sheltered in the gorge before I began a bit of a slog up towards Falcons Lookout. I was sweating within 24 seconds, so I was glad to get to higher ground where I was back in the wind to help me dry off.

A short stroll further and the path stopped at the cliff of Falcons Lookout. It’s a pretty spectacular spot and I noticed a handful of rock climbers on the wall descending nearby. I did my best, “Hello!!”, whilst waving my hand and smiling, but the one climber who noticed me just grunted. I guess they were either rude or concentrating, but it was disappointing, as I really put some effort into my ‘hello’. I might give it a miss next time and instead throw a few stones at them. Anyway, I stopped to take in the view and relax, although I’d been walking less than 30 minutes. 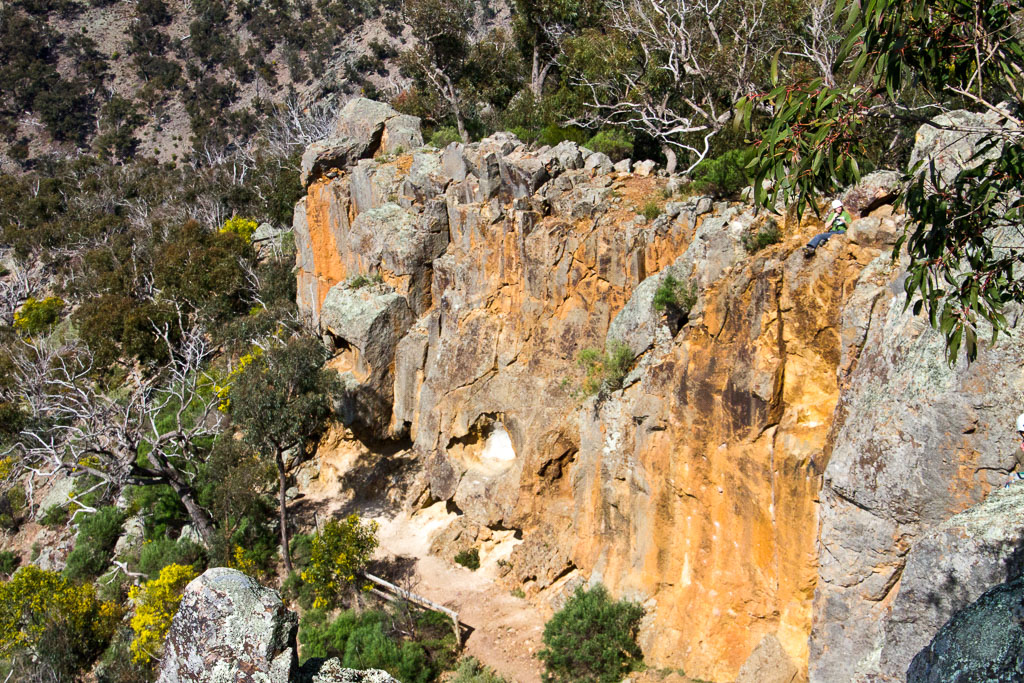 View from Falcons Lookout with climber at top right. 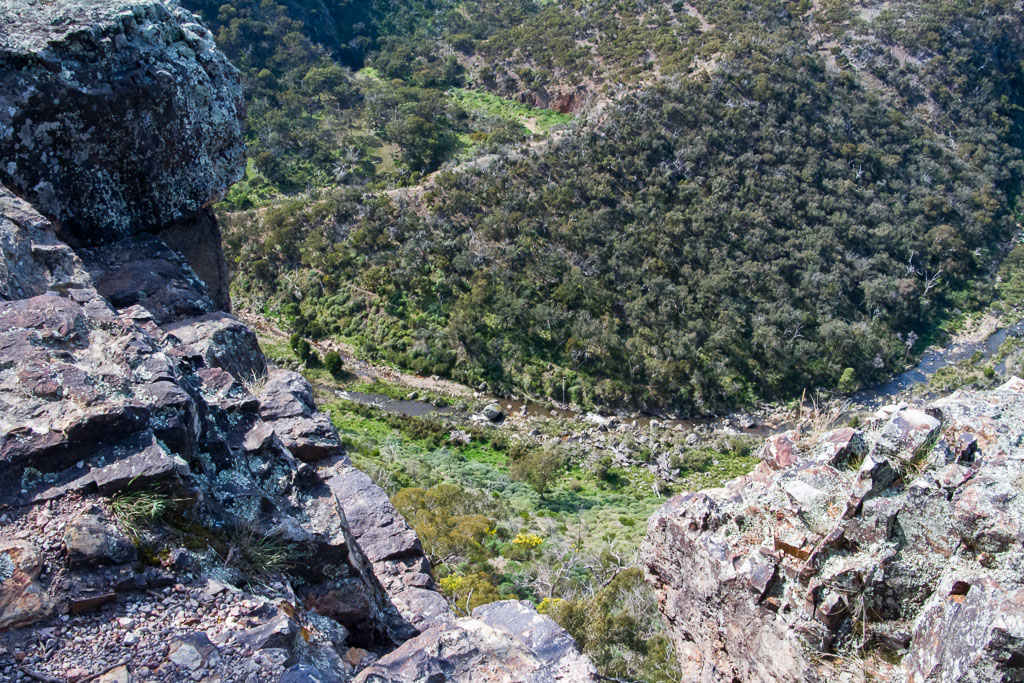 Looking down at Werribee River. 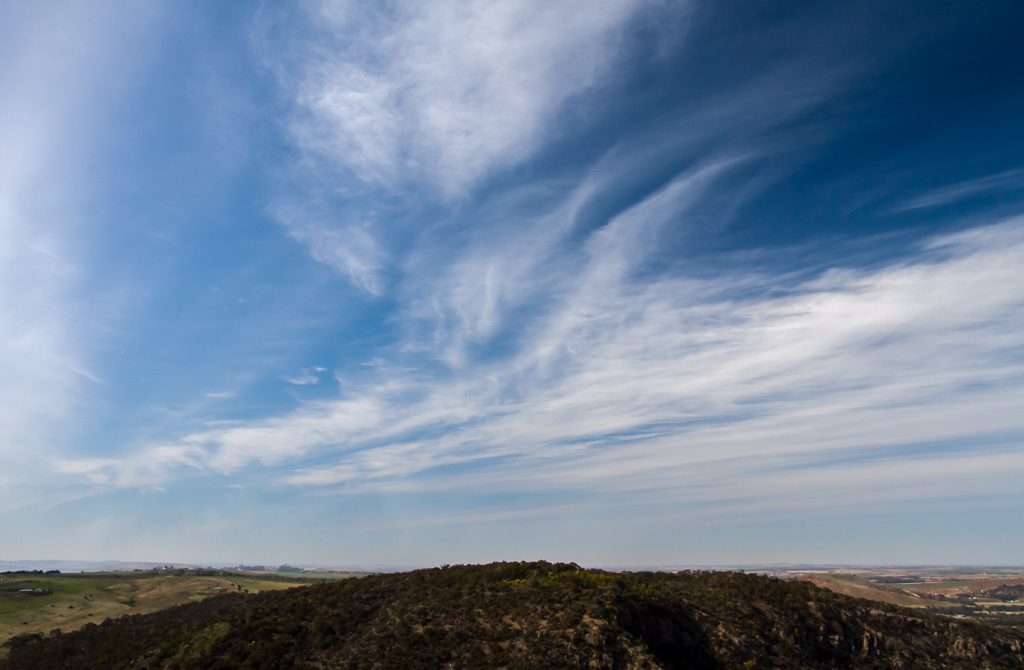 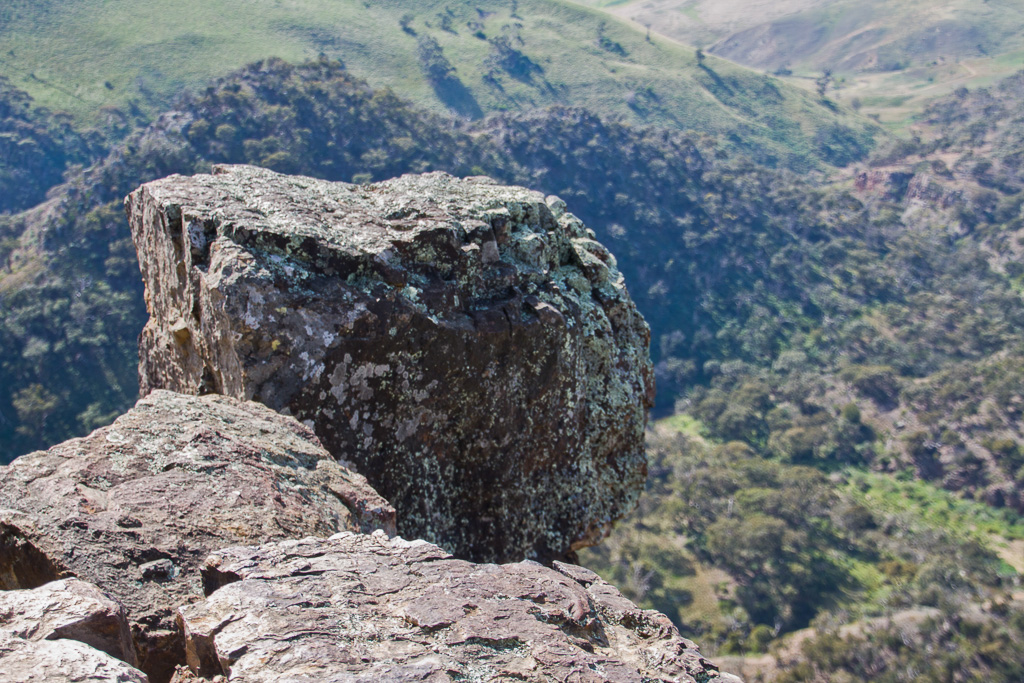 This rock looks quite nice to sit on (if I had bigger balls).

The last time I came to Falcons Lookout, Ben was with me and we brought some reading material. It’s been a while since I took something out to have a look at, so on this occasion I thought I should bring along a book called ‘Sum: Forty tales from the afterlives’ by David Eagleman. This was given to me by the ‘grammar guru of good times’ and I can say it’s a worthy book to read, but only if you’re prepared to have your brain detonated. It’s done that to me and although some chapters are only a couple of pages, that’s enough before one has to put it down and absorb what has just been read. 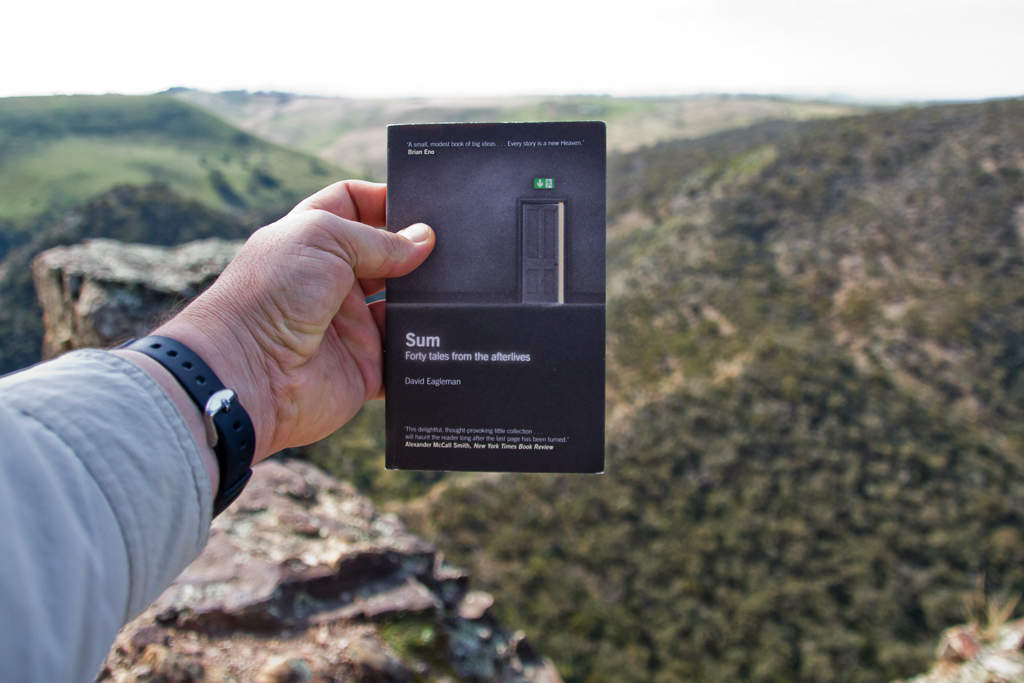 After relaxing for quite some time, I thought it best I get walking to Ingliston Granites. I backtracked until I reached a signed turn-off, that sent me onto some ground I hadn’t walked before. Whilst there’s no defined path, it’s pretty easy to find the way. A fence. Werribee Gorge is surrounded by private land and nearly all of these areas are cleared, so I was suddenly now in a raging headwind. Definitely an occasion to grip the toupée, as I pushed into the wind down a fairly long hill. 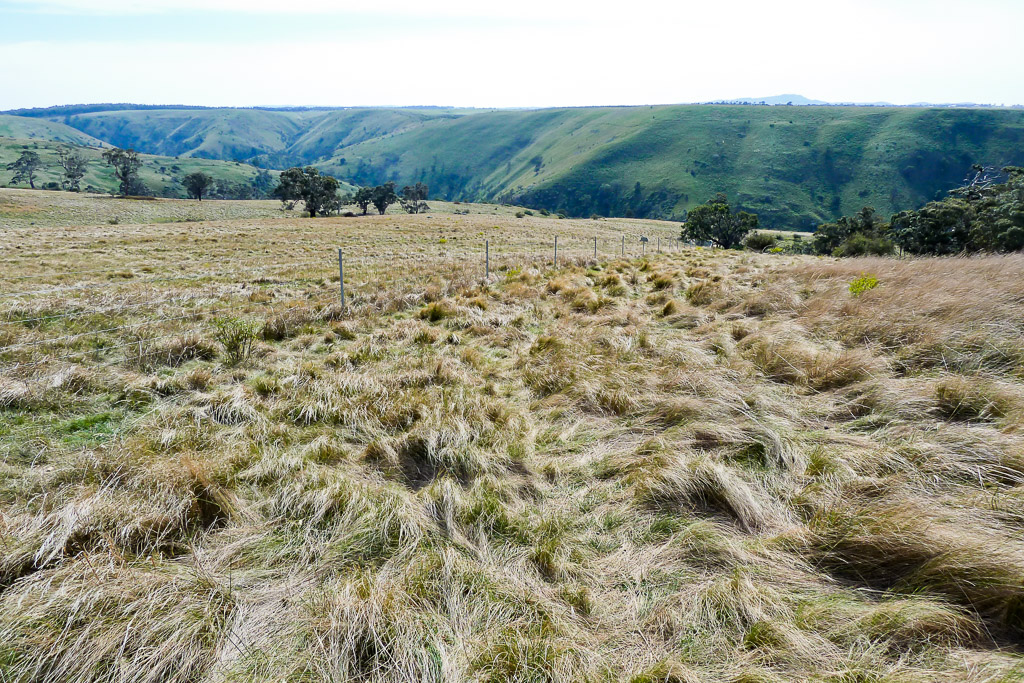 The wind is blowing the grass a little.

It was pretty straightforward walking, as I followed the fence line that made a few turns and then I could see something ahead. Yep, a powerful looking number 18, which was a bonus as I hadn’t seen one for ages. 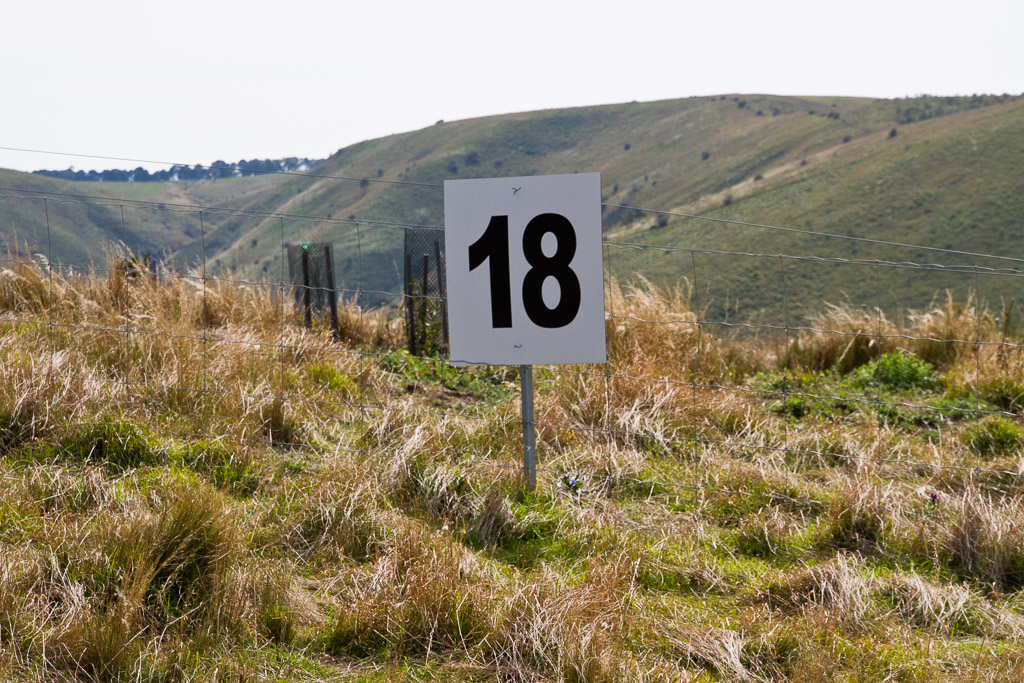 I admired that big number for about 0.2 of a second and then moved on. By now I was wondering where the inspiring, massive granites were, as I thought I must be getting close, but I couldn’t see them anywhere. Then I came across a lonely sign sitting in the windswept grass, which informed me I was at my destination. 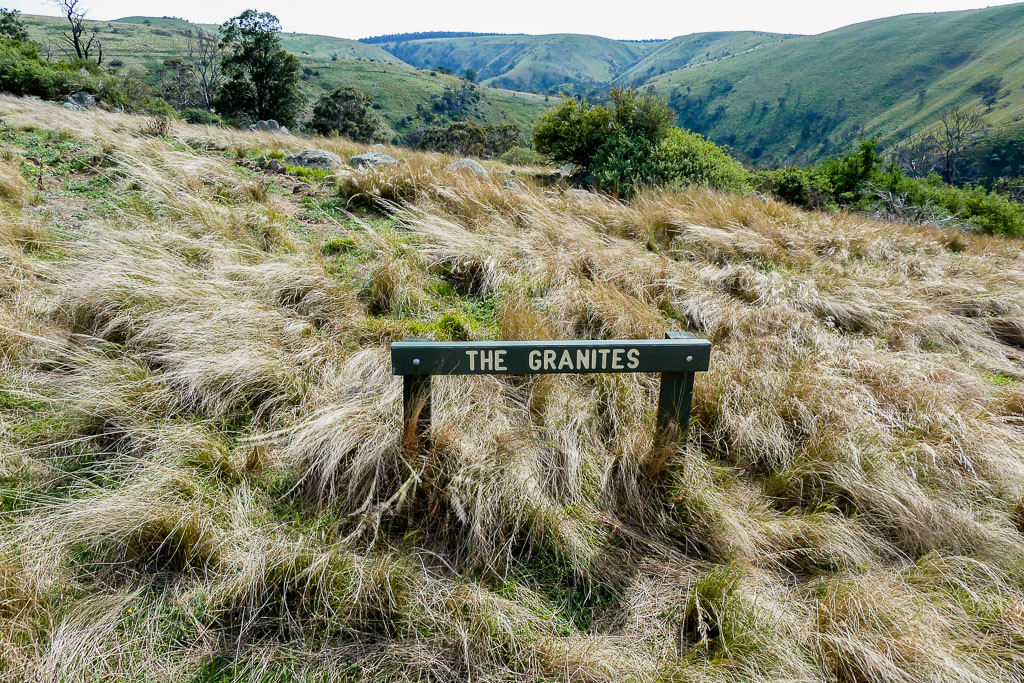 I reckon I’m in the right spot.

The trouble is I couldn’t really see any massive granites, other than small rocks lying around. I clearly wasn’t looking hard enough, so I descended a hill leading towards Werribee River.

Maybe too much Dilmah tea has a hallucinogenic effect, as I was expecting dozens of massive car-sized boulders, but it wasn’t the case. Some of them have names and I had my eye out for a couple called, ‘split apple’ and the ‘dugong’. The trouble is, one has to start guessing which is which, as a lot of them look identical.

I think Banksy should visit and spray paint some with names. Then again, maybe as part of their community work, some juvenile offenders can come and spray paint rocks? That way, nuts like me can work out which is which. I’m definitely full of good ideas. 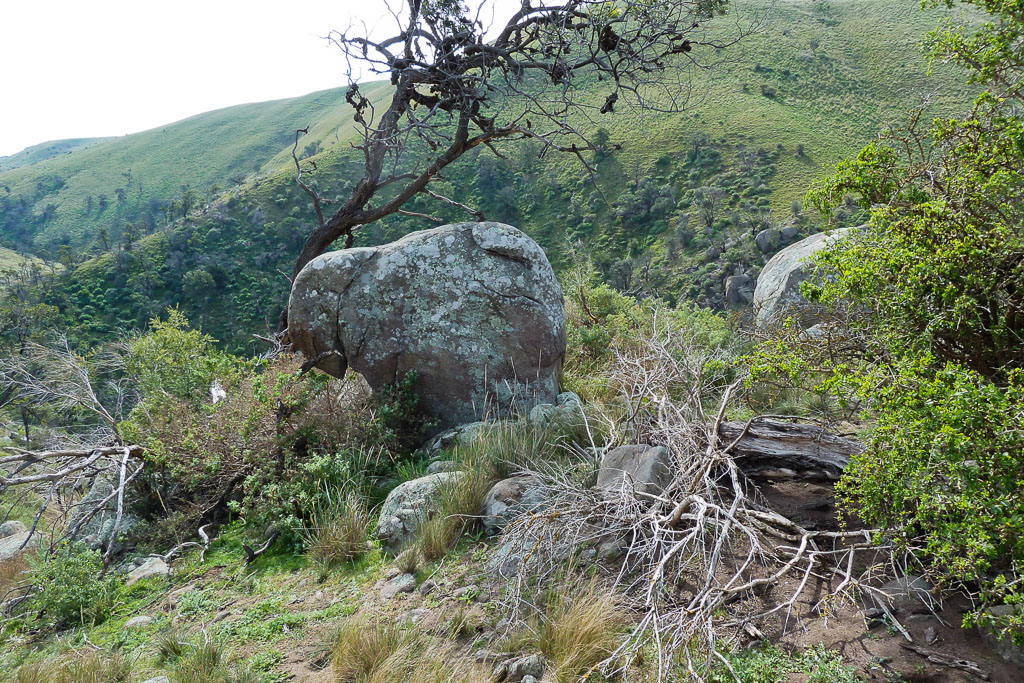 Well, I think I found the ‘dugong’, but I needed to squint my eyes and use my imagination to really think it looked remotely like an animal. I did find the best rock of the lot though and this one I decided to call ‘The Chair’, although it’s known historically as ‘Rock Relaxo’. 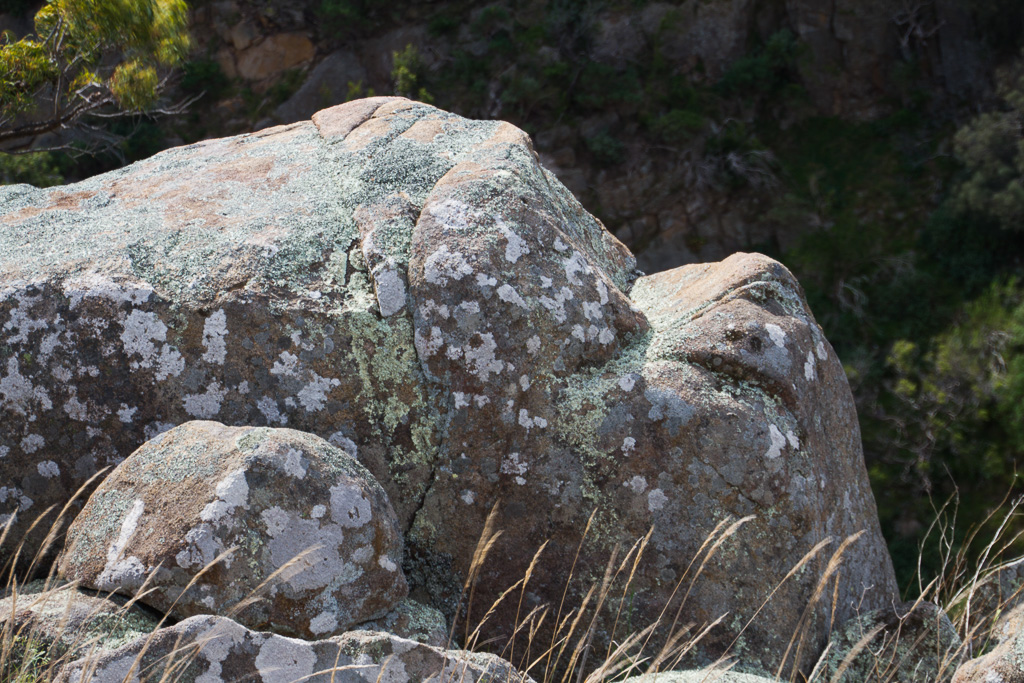 This is clearly The Chair.

It was perfect to sit on and I guess I spent the next half hour just relaxing in the gale force wind. The view isn’t too bad though, as there’s a nice view of The Island opposite. At one point, I considered descending all the way to Werribee River, but once I got comfortable, I decided against exploring any further. I did use my telephoto lens to scan for any possible ‘split apple’ looking rocks, but the one below is the best I could come up with. 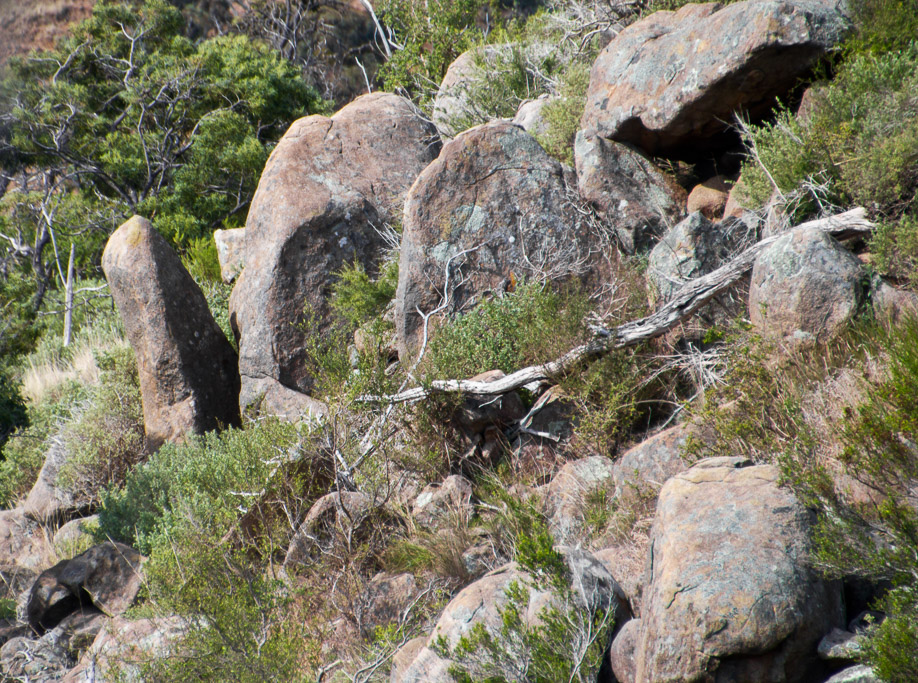 I’ve got no idea, but whilst sitting I had a lot of names for the rocks around me. The one below is the ‘gorilla’. Again, the best method I’ve found is to dim the lights and look at the photo, whilst doing star jumps and you’ll clearly see it looks like the face of a gorilla. 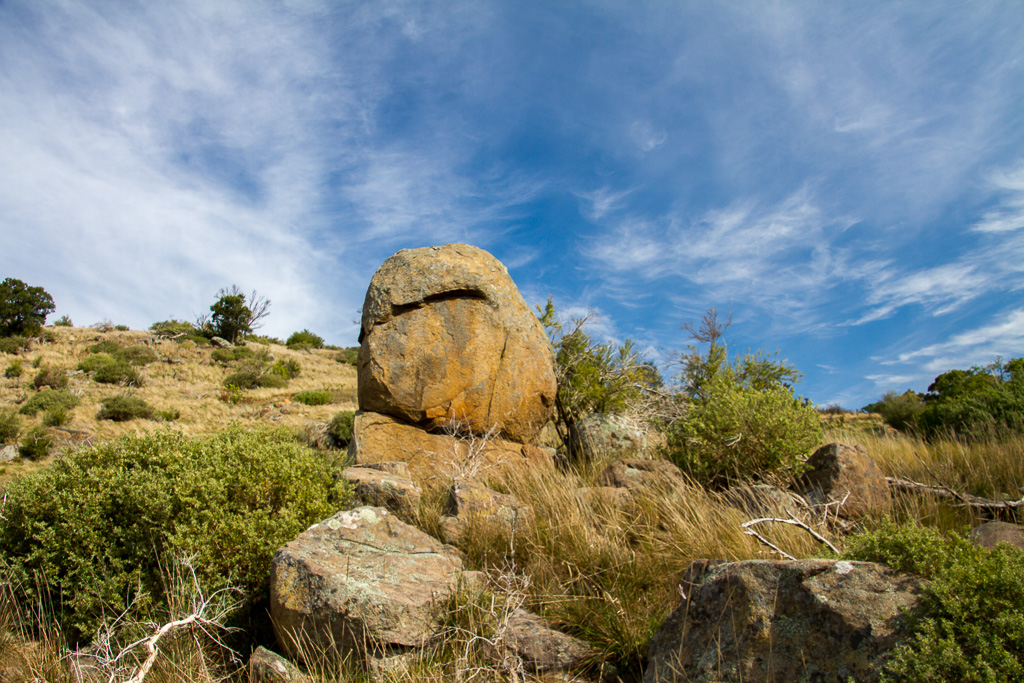 When I was a kid I used to watch the news when the Vietnam war was on. Now and again, I’d hear the reporter saying a number of troops were killed by Vietcong guerrillas. No one decided to tell me there’s a difference between a gorilla and a guerrilla, did they? I used to think to myself, “Wow, those Vietcong gorillas are nasty!” I reckon it was a number of years before I found out there’s a slight difference between the two words. The internet really would have come in handy in the 1970’s when I was growing up. 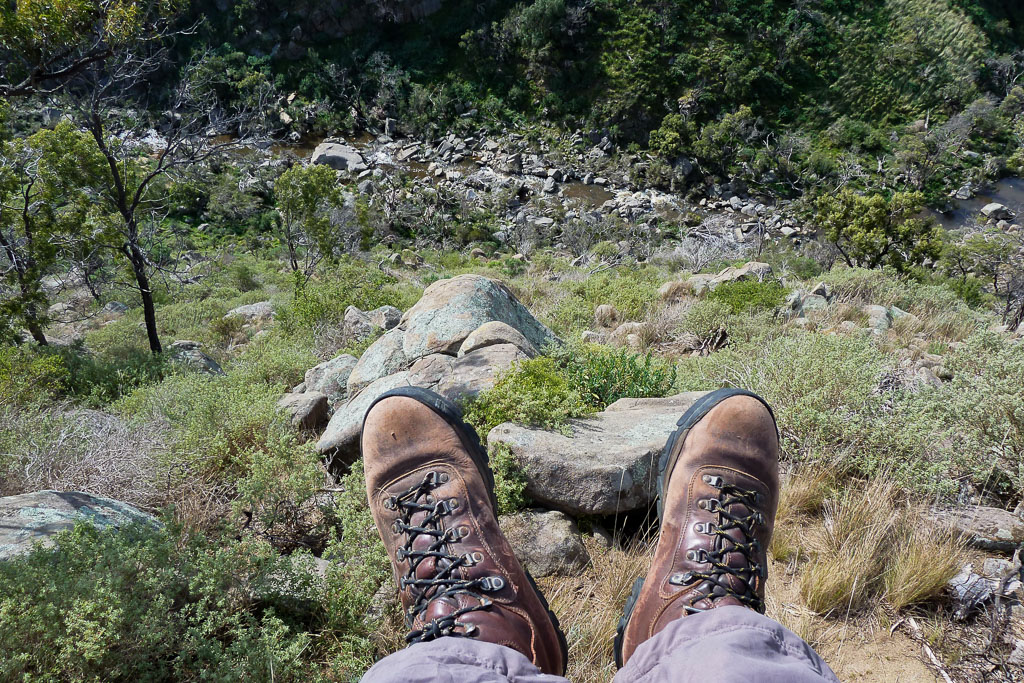 On the Rock Relaxo. 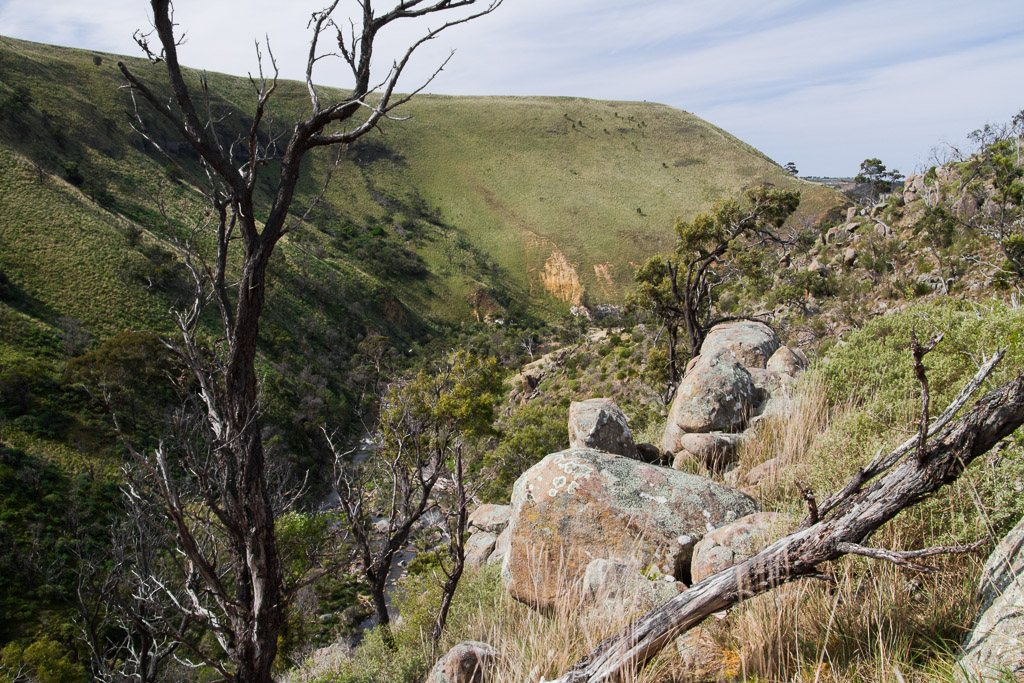 View of The Island from Rock Relaxo.

The fun hadn’t ended though, as I did spot a tree called ‘Up Yours’. It’s quite unusual to see a tree giving the ‘finger’, but this walk was full of surprises. I even had to get out of the chair to take the following photos, which shows how impressed I was. 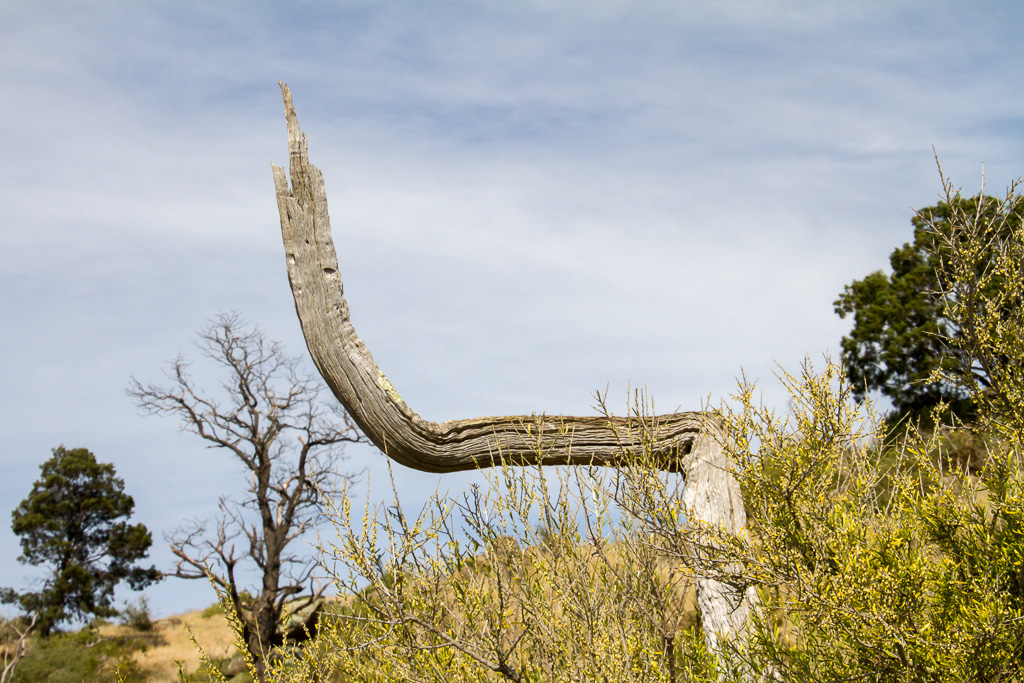 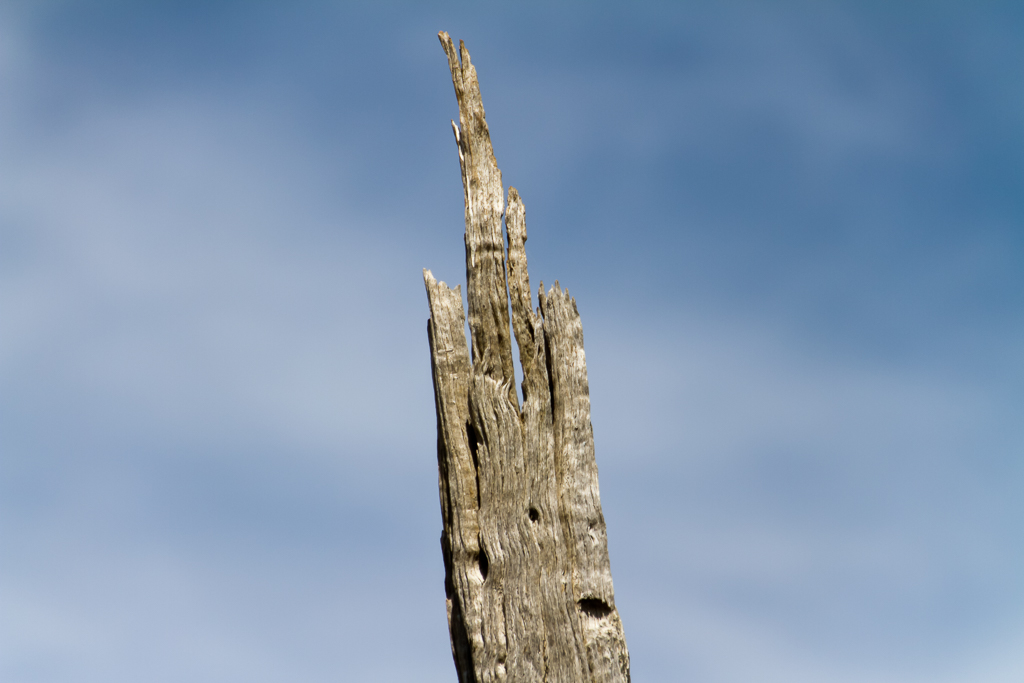 The Up Yours Tree

The constant howling wind was creating some quality clouds, which were perfect for guess what? Yes, the polariser of course and it was only a matter of time before I was going mental with it. 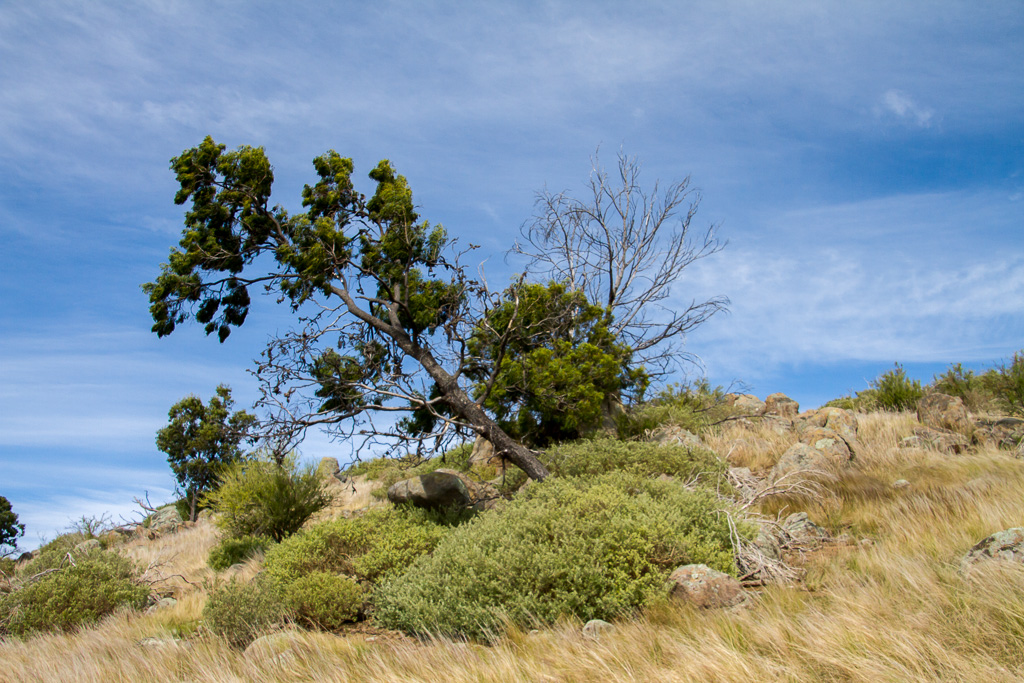 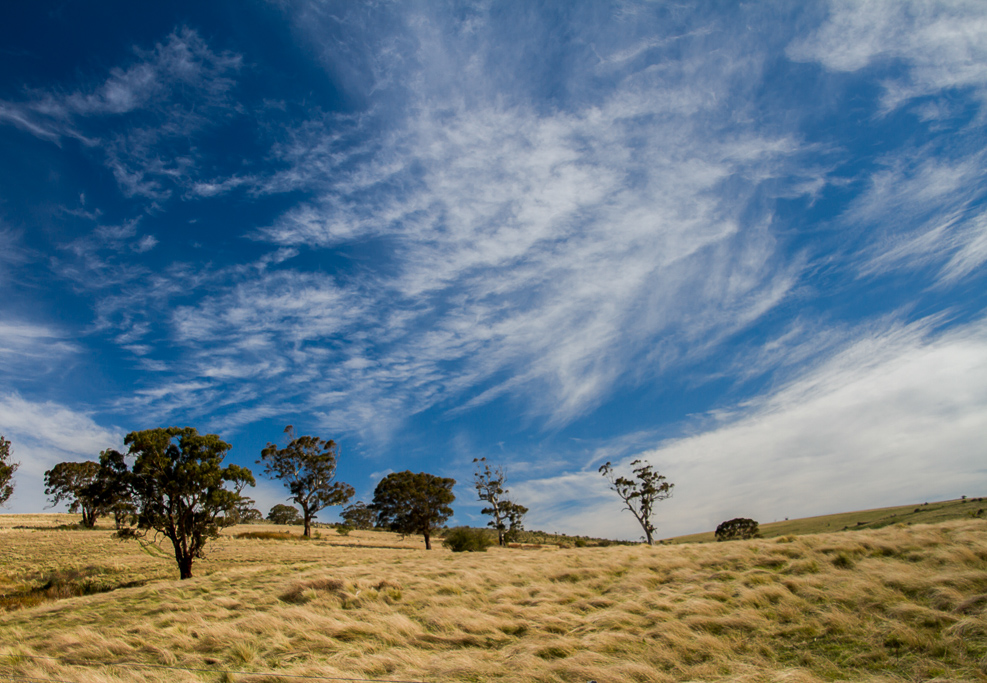 All good things come to an end I guess, so I thought I should start making my way back. I had to retrace my route to the car, which was not the most exciting of return trips, but what made it interesting was I was no longer looking into the glare of the sun. This time I could really see the clouds and was almost crying at the polariser opportunities. I officially went bananas and you might as well fasten your seat belt and just enjoy the deepest of blue sky. 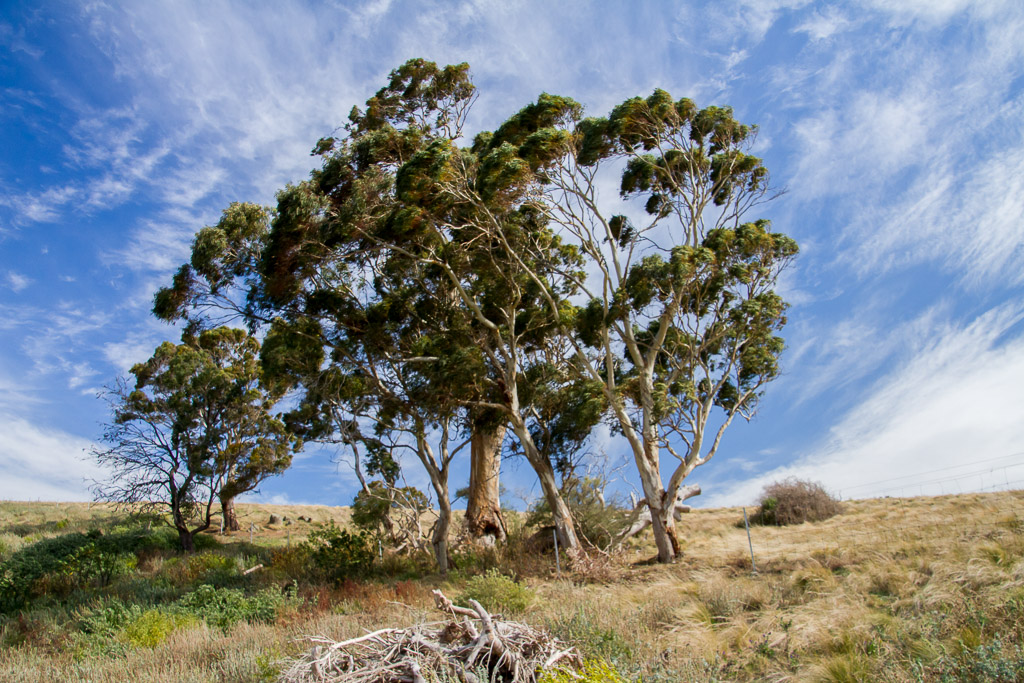 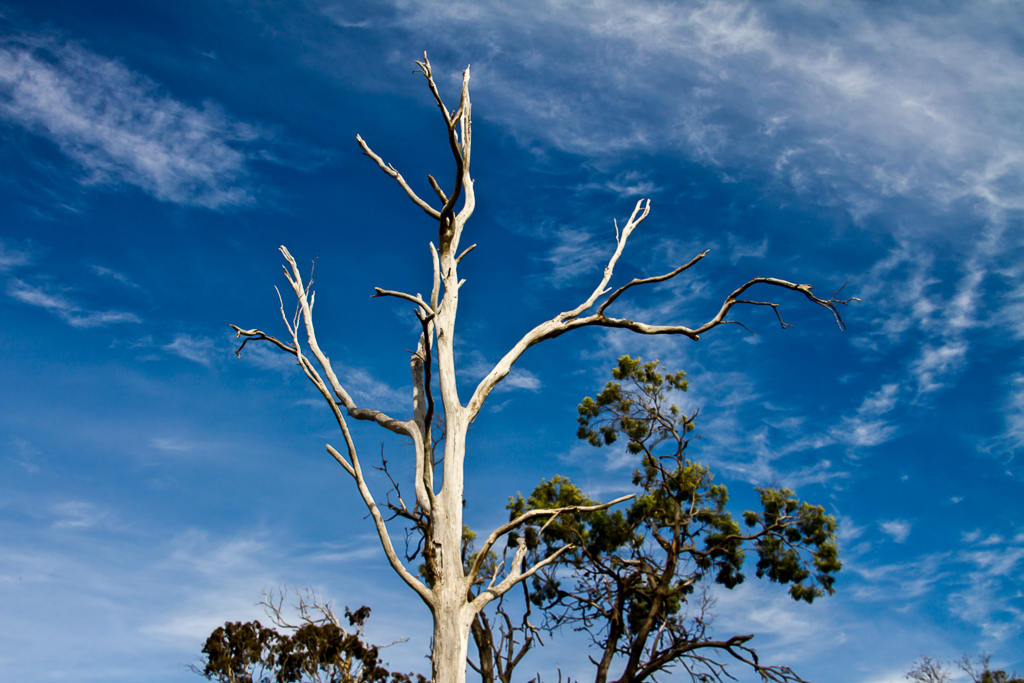 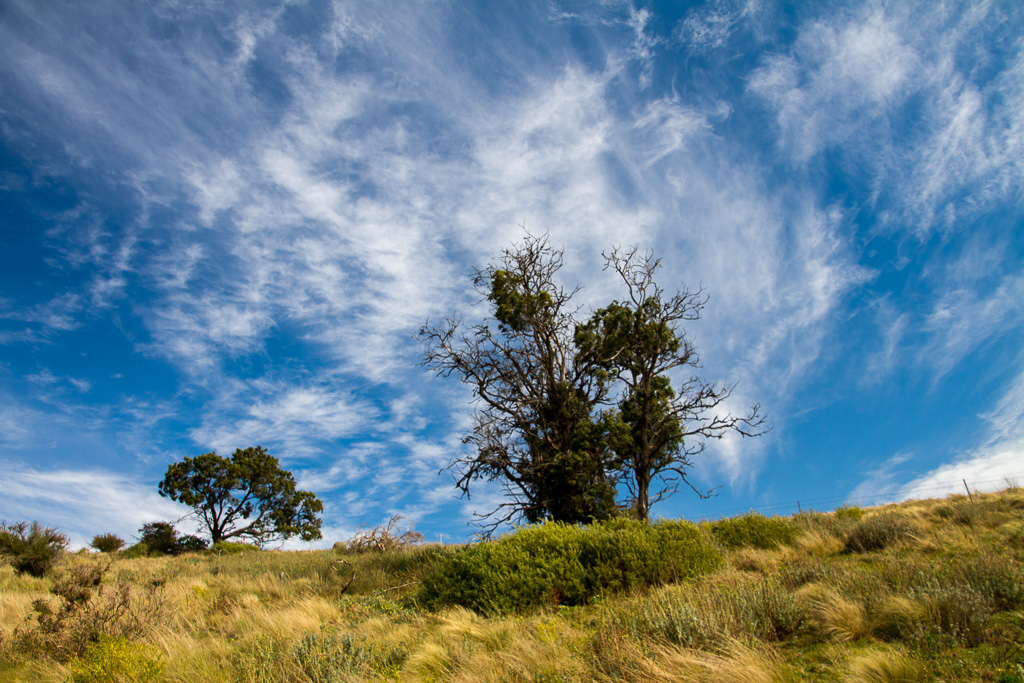 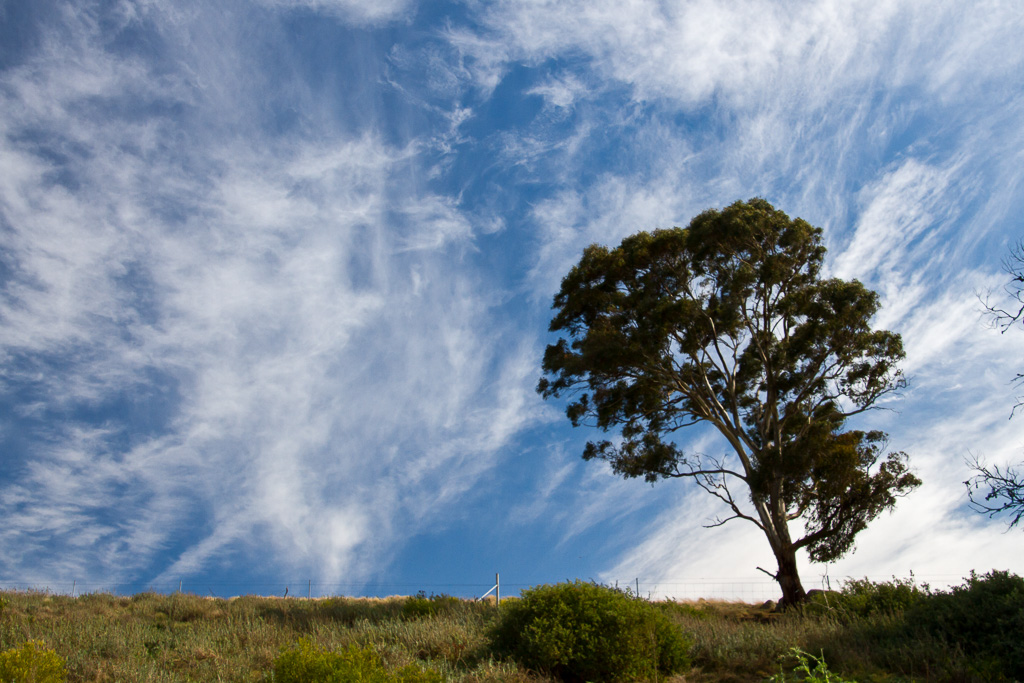 You know what? Even I began to look for something a little bit different, so this farm gate came in handy. It didn’t look so good standing up, so I went for the ‘extreme photo position’ of lying on my side in the grass to snap the following pictures. 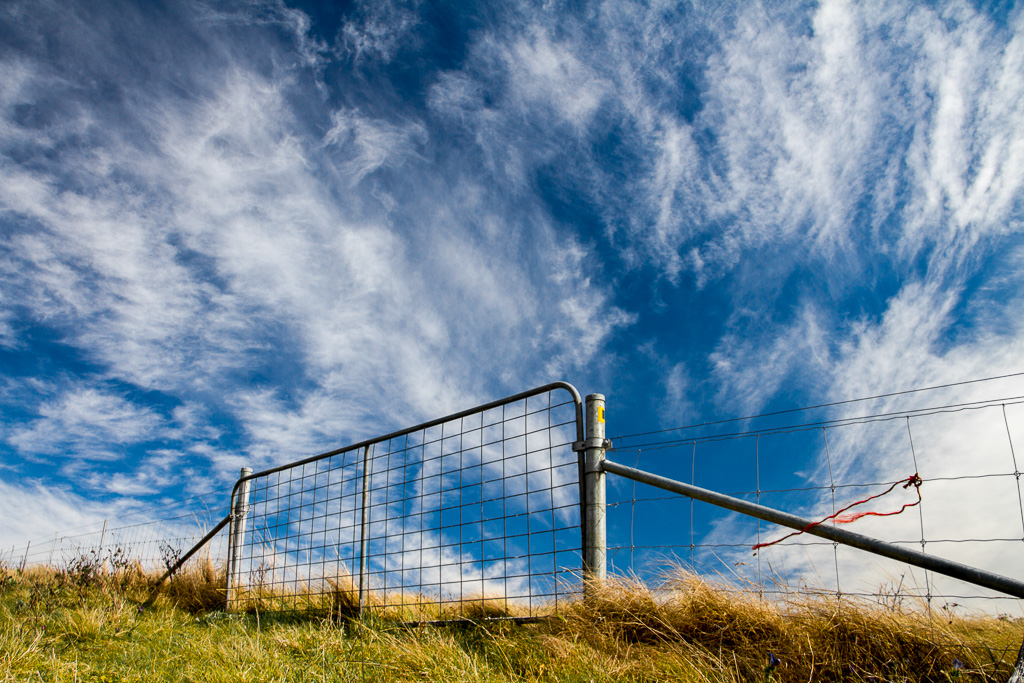 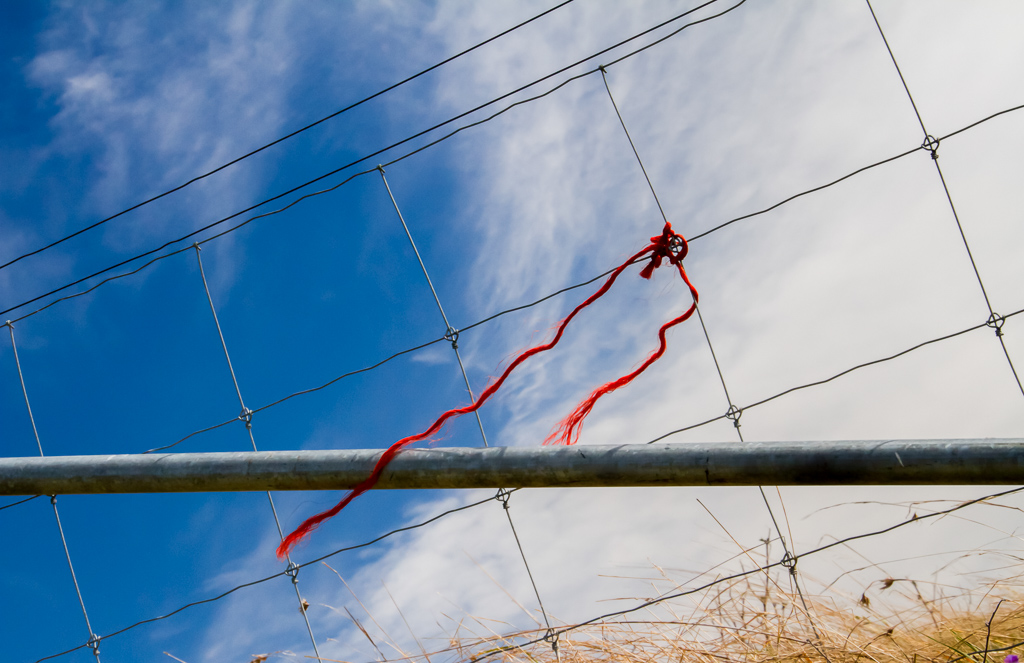 Well, there you go. Are you sick of the polariser yet? No? Okay, if you say so, here’s some more and if you encourage me any more, I’ll take another one or two hundred. 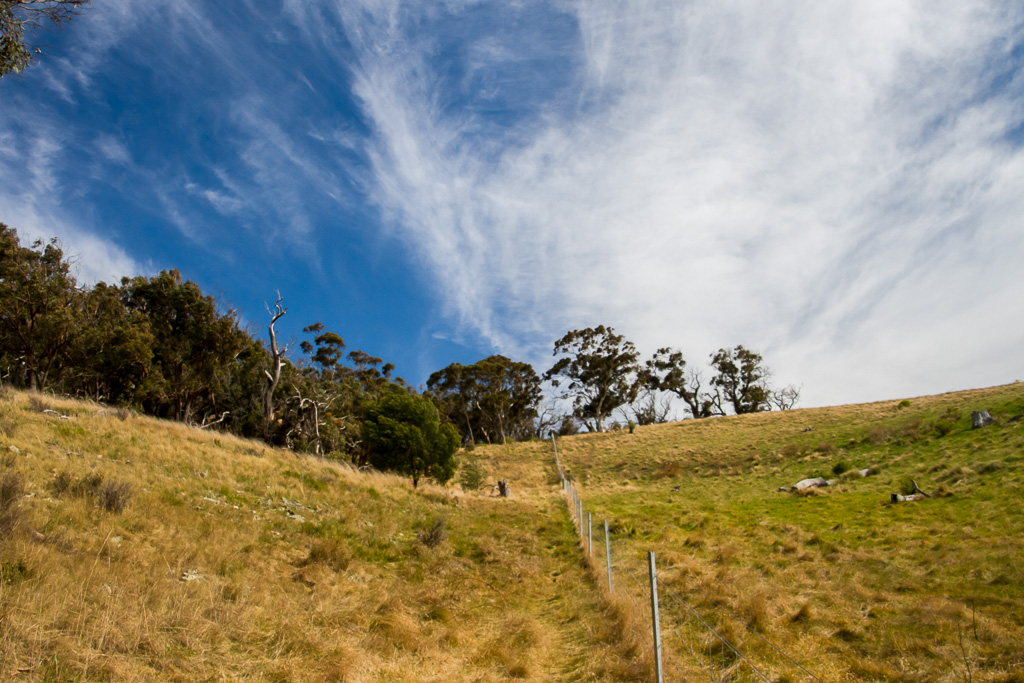 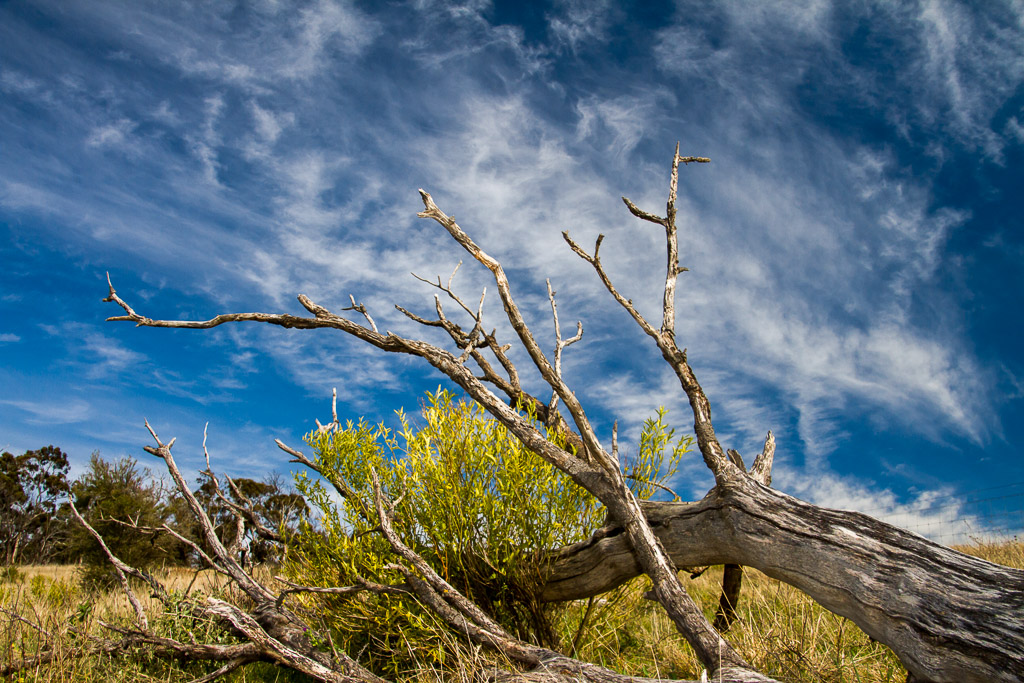 It has to end somewhere I guess and soon I was back into the enclosed forest and descending into Ironbark Gorge. There’s a fair bit of climbing on this walk and the final hill back to the car park had me puffing like and old locomotive. Once up the hill though, my car was there and I was glad to sit down. Not before one last shot from the car park, looking at the rail bridge in the distance. You didn’t think I’d stopped taking photos did you? 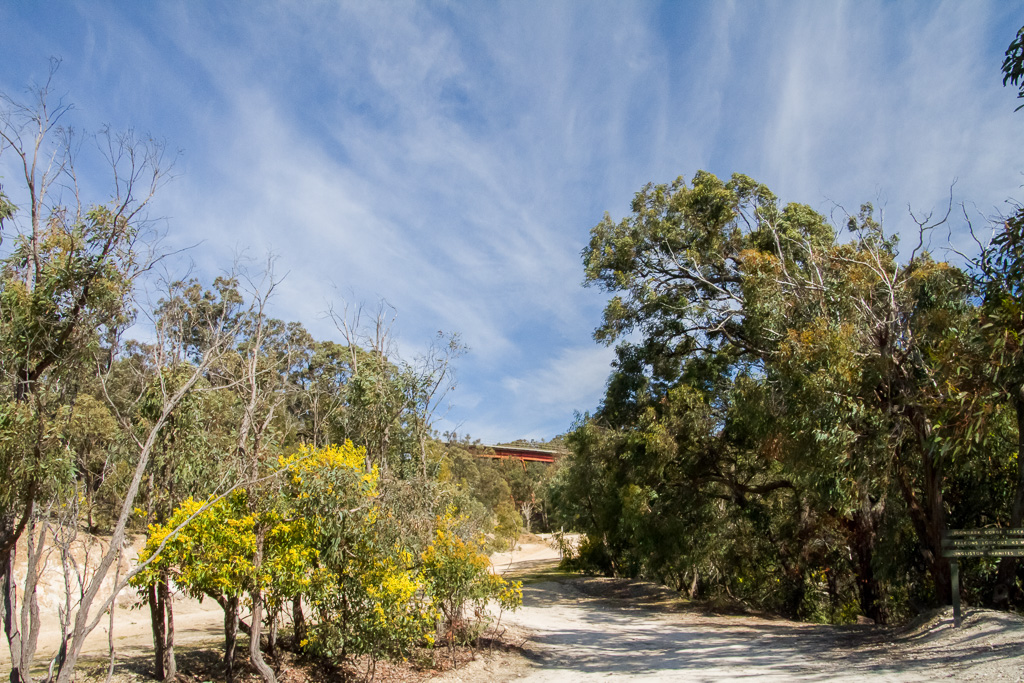 So that’s it. The walk was done and the final statistics are not too impressive. A measly 7.04 km, but the total elevation climbed for the day was a more impressive 568 metres. That’s not bad for such a short walk and I did noticed there was very little flat walking for the day. What do I make of the granites? I didn’t think too much of them, but writing this entry has entertained me a little, so now I can thoroughly recommend it for a short walk, even if it’s just to make up names for different rocks. Time to go!