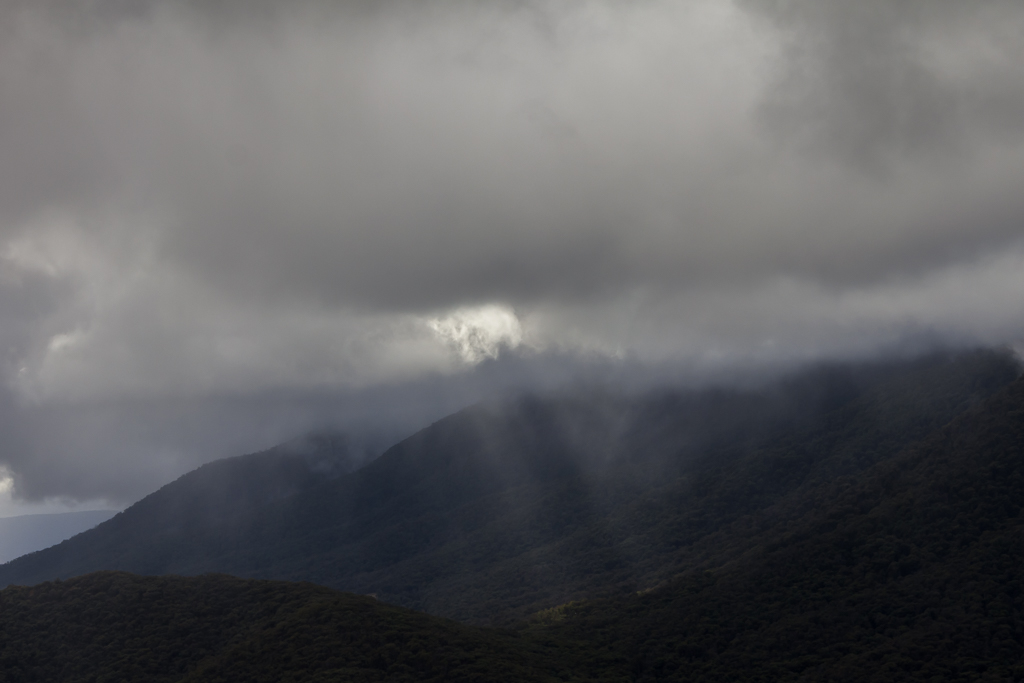 I guess I’ve been a little slow writing up the second day of my intended circuit walk of the Cathedral Range State Park outside of Melbourne. I might have given something away when I mentioned in the previous sentence the word ‘intended’.

I’m sorry if you’ve been waiting over a week for this update. As you know, this was the second day of my walk. Previously I’d hiked from Cooks Mill, climbed Sugarloaf Peak via Canyon Track and then walked the Razorback Track, before stopping for the night at the Farmyard. How did I feel? Absolutely rooted, but you already know this, as I detailed the reasons in the previous post.

Even if I felt sore, I still intended to do what I’d planned for this day. Some climbing was on offer at the other parts of the range. Including the South Jawbone Peak, North Jawbone Peak, The Cathedral, Cathedral North, Little Cathedral (how many hills can have the word cathedral in them?) and Neds Peak.

I guess some of you have been staring at your computer screen for so long, waiting for this amazing tale of what happened? As a result of the long wait, I guess your eyes feel like they’ve been removed and buffed with a brillo pad, dipped in acid and reinserted back into your skull backwards by a rogue Yeti? 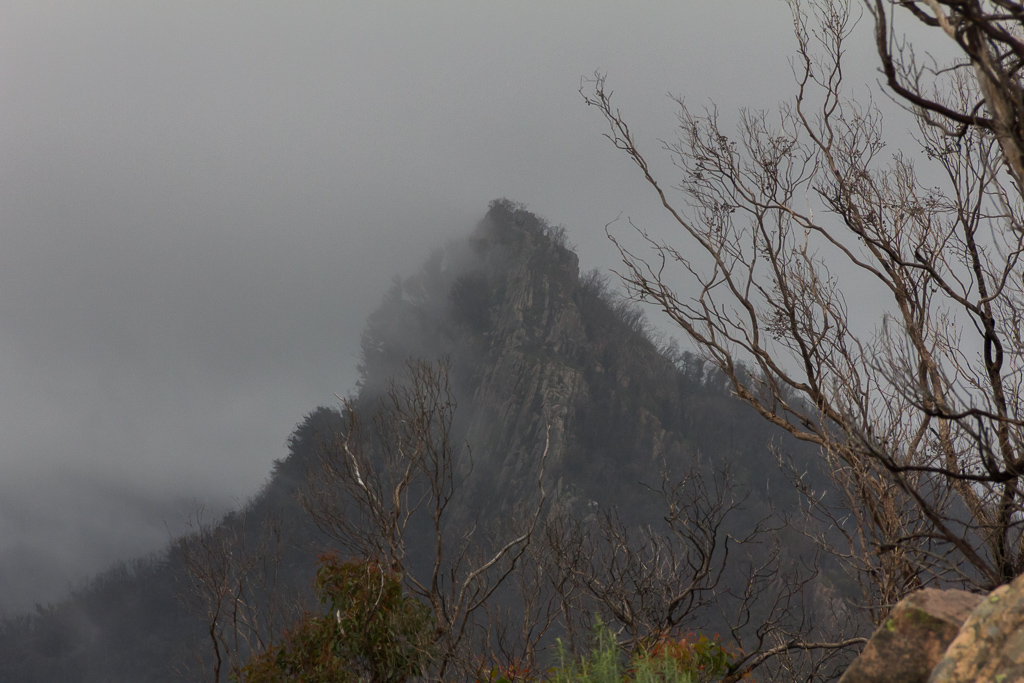 I went to bed in the Farmyard quite early, feeling a little sore after the previous days stumbling fun, but I woke up only a few hours later to the sound of heavy rain. This was my second night spent in my new Big Agnes tent and it was a good opportunity to see if it was up to the job of keeping me dry. I had a bit of a scout around on the inside with my headlamp and it seemed okay, which was a bonus, as the rain wasn’t letting up and didn’t seem to alter much over the next six hours.

It’s easy to forget what the temperature was as I was insanely cosy in my new sleeping bag. I was fighting heat exhaustion most of the night, but was drifting in and out of sleep when I was awoken in the morning. Not to the sound of rain, but the sound of something that made a noise similar to a chicken crossed with a swamp-hog running past the tent.

At first in my sleepy state I thought I was still listening to the latest Justin Bieber album on my iPod. Then I felt confident it was the reason why this area is known as the Farmyard. Lyrebirds of the area imitate farm animals they have come in contact with in the valley below. So I assume it was that or a new animal species. If it was new, then the mind boggles what it would look like. 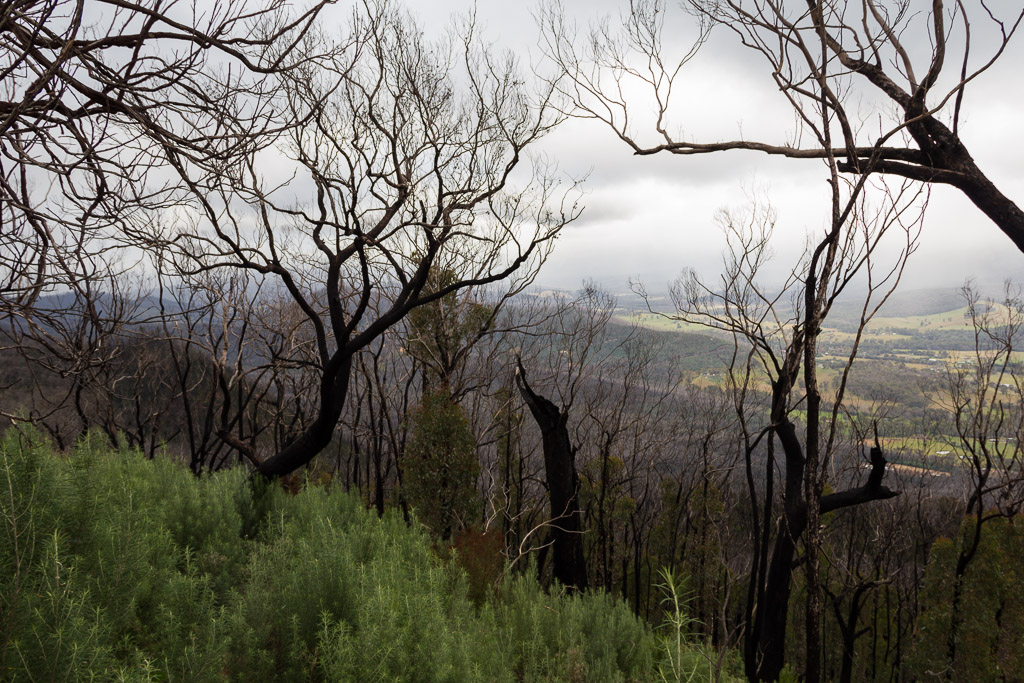 Anyway, after those weird sounds, I decided to get up to find the outside temperature bloody freezing, as it was icy with low cloud and combined with wind, heavy showers were rolling through. This was distinctly a bummer, as the days walking was again along the rocky ridge and I was feeling a little concerned as I had trouble staying on my feet in the dry, let alone walking with the ground wet.

The whole trip was meant to be about elevated views, so I wouldn’t be impressed having to spend the day walking in low cloud. Before making any decisions about what to do, I figured I should do a little scouting of my surrounds.

In the icy conditions, I figured as South Jawbone Peak, Cathedral Range was next to me, I’d climb it, do a weather report and then consider what to do. It was a choice of walking as intended or pull the pin and descend back to my car, which was less than four kilometres away. 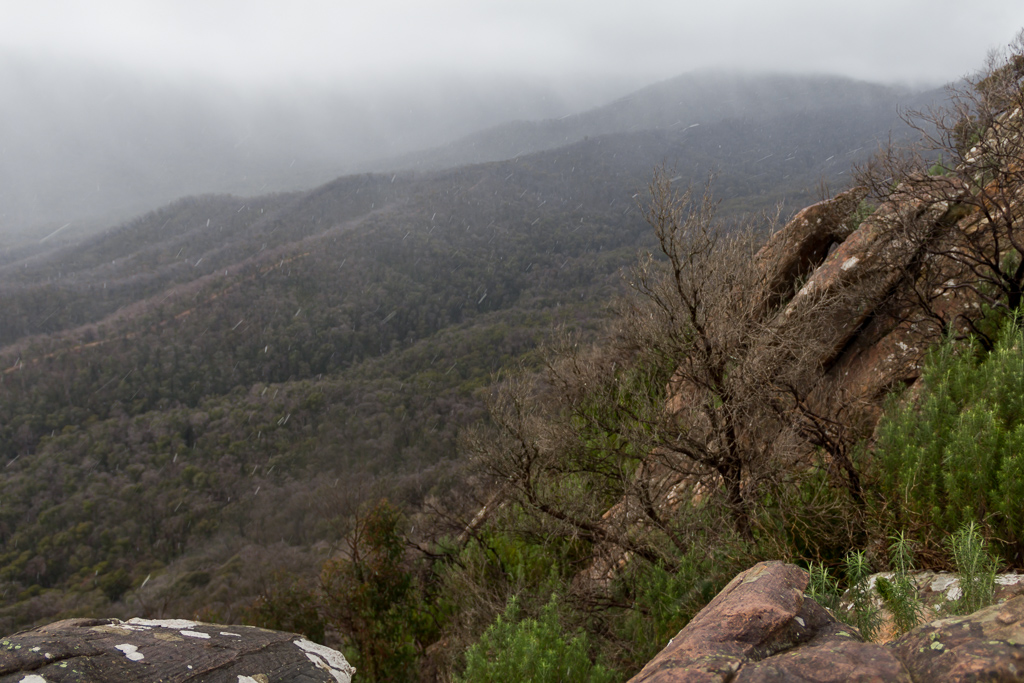 I trotted up the path to the South Jawbone Peak, pushing through plenty of wet regrowth that hemmed the track until I reached the top. Even I, who doesn’t usually get too cold, really noticed how freezing it was. I guess this feeling was confirmed when snow began to fall. Yes. Snow. 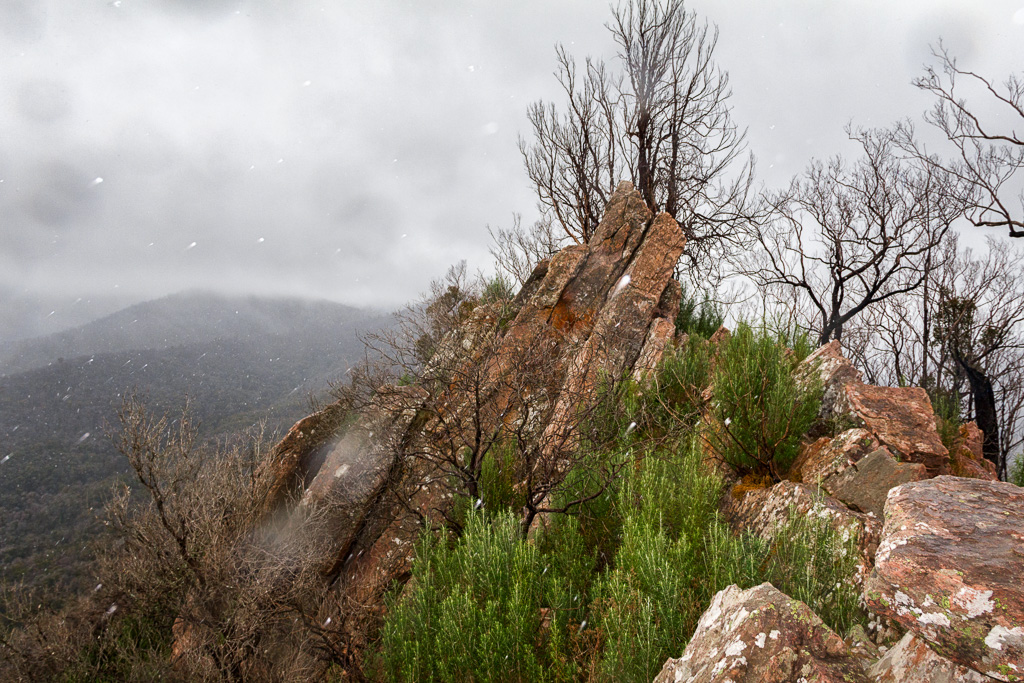 Okay, it was melting when hitting the ground, but that wasn’t much of a consolation. No, the conditions were rubbish, so it put me off finishing what I’d intended for the day. Looking up the ridge in either direction was pretty bleak viewing, as Sugarloaf Peak was covered in cloud and the nearby North Jawbone kept getting swallowed by clouds passing through. 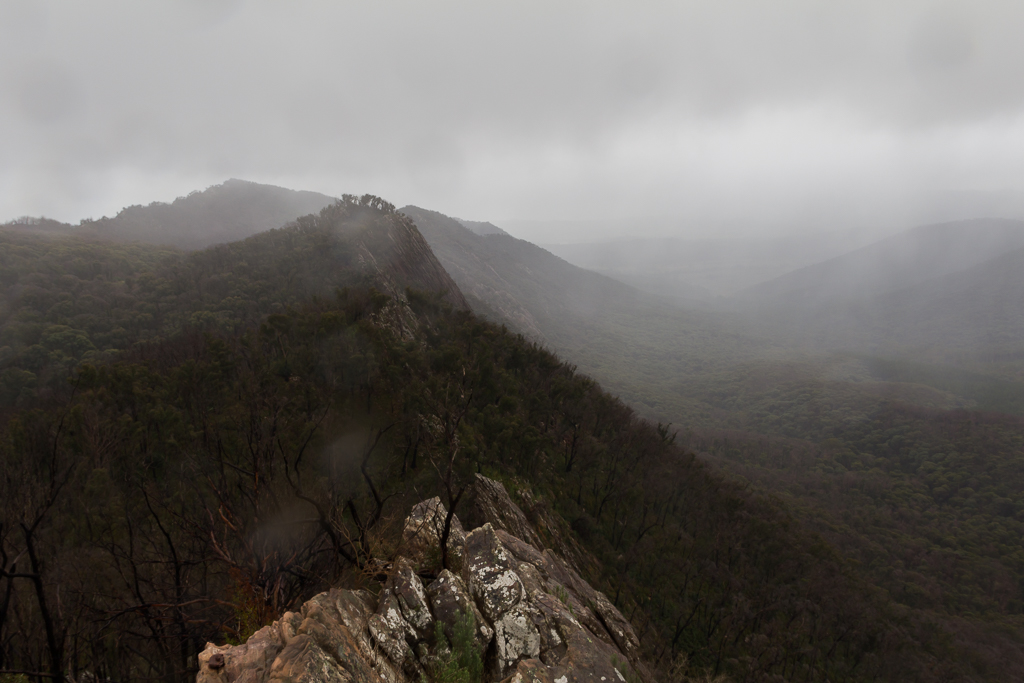 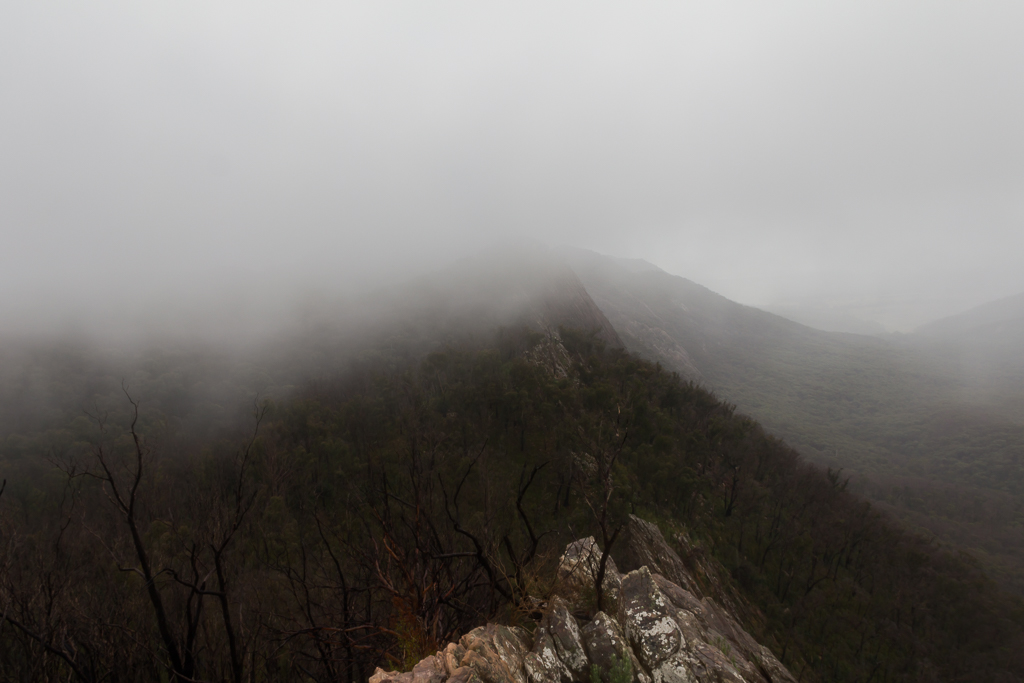 Little did I know this day was the coldest May day in Melbourne since 2000 and the earliest in the year that Melbourne had a maximum below 13 °C since 1970. It certainly felt that way and with a bit of regret I thought I should pull the pin and head back down. I could have stumbled on, but there’s no fun walking in the rain and without the sun how would I get those zany polariser photos?

I’ll just have to come back, but at least next time I can come back with just a day pack and do the bits that I missed on this trip. I also get to avoid the eternal Cerberus Road as well, which is a bonus. 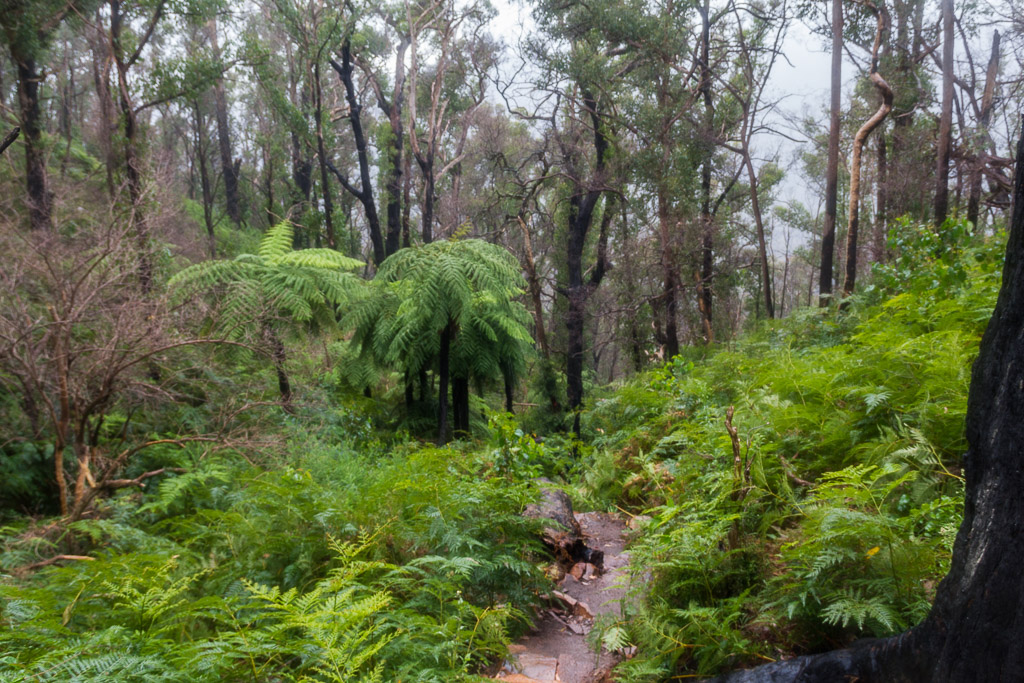 I packed up my gear in the rain and I guess the enthusiasm was waning a little at this stage, as some of the showers were very heavy. Why keep walking when the warm car is not so far away?!

I headed down the Jawbone Creek Track, which has had a complete makeover by the looks of it. A lot of steps cut from rock and it wasn’t too bad, as I was going the right way, which was downhill.

In less than an hours walking, I’d reached the intersection, which meets St Bernards Track. I stopped for a while to put the camera away, as I was feeling mild paranoia of getting it wet when I saw a bit of movement in the trees. It was a lyrebird fossicking around and I managed to get some snaps, but a longer lens would have been handy before it took off. 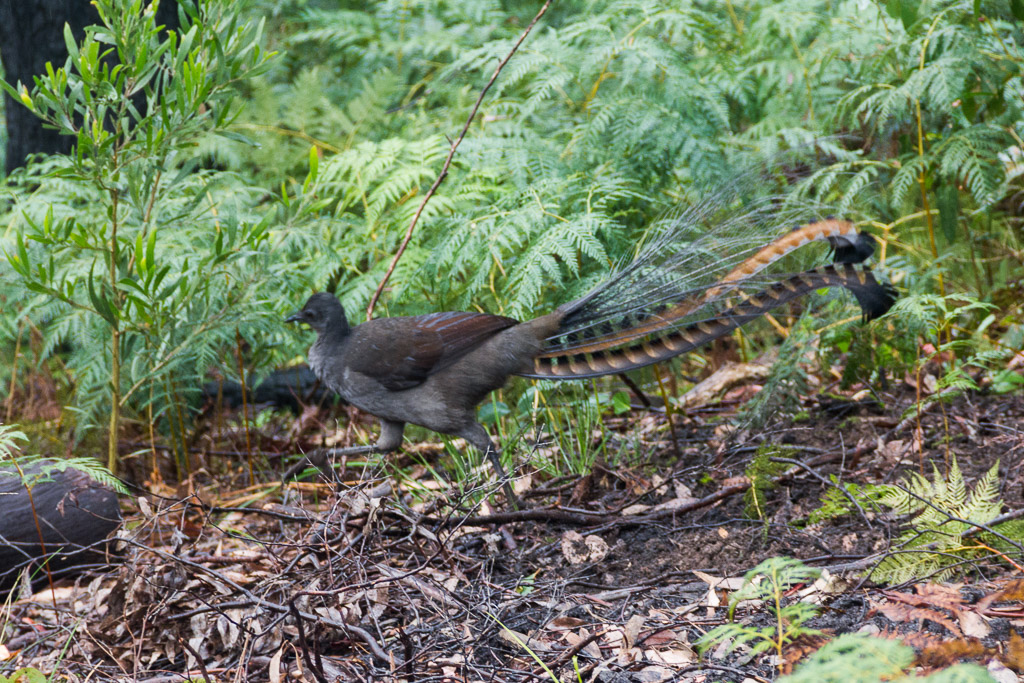 A little bit more downhill walking and suddenly I was back at the car. Well, this wasn’t the epic day of hiking that was planned, as it was well and truly over by lunchtime. I can say though that easily the heaviest rain of the day occurred for the ten minutes it took for me to try and throw everything back into the car.

It was pretty miserable stuff and superbly timed just when I was trying to get the wet weather gear off before it drenched the interior. Well, that didn’t work of course and I was glad to have leather seats, which are a breeze to clean and then fire up the engine and drive off still in hiking boots.

I guess the overall distance of the walk was not exactly amazing with only 12.31 km covered in the one and a half days, with total elevation gain being 834 metres. Now, I must get back there and finish it off before the weather gets too over the top and with June not far away I’d better do it pronto. It was a drive back in the rain with a brief stop at the Buxton Roadhouse for what is claimed to be the best hamburger in Melbourne. Well, I don’t know, I had one and it seemed a little overrated, so I would still lean towards Andrews Hamburgers in Albert Park as the best I know of!