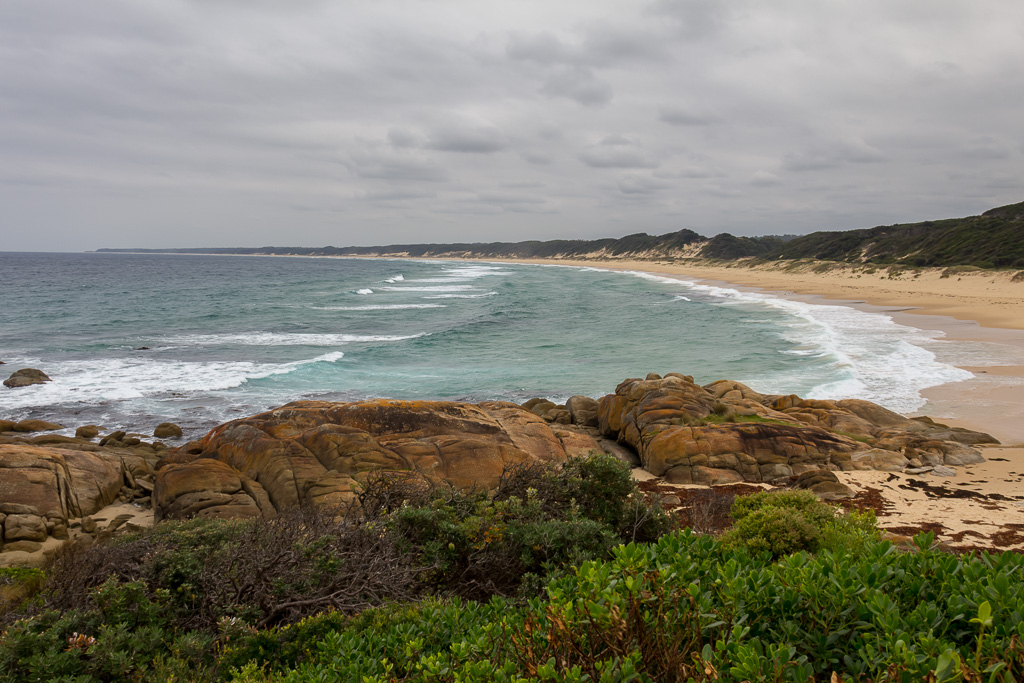 It was quite a relaxing night spent at the Orbost caravan park although the fact people were all around the place took a little bit of getting used to after quite an isolated time in the Snowy Mountains. There’s nothing quite like a caravan park for some oddballs as well, especially in the comfort station.

I went and had a shower and a bloke was standing at a sink with his shirt off shaving with an electric razor. No problems hey? I was taking my time and he appeared to be buzzing for an eternity, which made me wonder how precisely he was doing the stubble on his face. Well, of course it’s not that simple, is it?

When I stepped out of the shower I noticed he had moved from his face to his neck and then his chest. Yes, he was shaving his chest with his electric razor and he was descending.

It was time for me to dry and escape pronto, before he moved down to give his nads a cut and polish. Upon walking out of the showers in a daze, I was confronted by a four feet tall old bloke who said, “Are you the boss?” “No, I’m not mate”, to which he replied, “Well, you’re big enough, so you should be the boss.” It was that sort of a morning…

After that excitement, it was time to head to Cape Conran a short distance away. I was sort of familiar with the place, as it’s where I started my Croajingolong hike last year. On the day I started, it was a matter of heading straight off up the beach without having much of a look around. It’s not exactly overflowing with stuff to do, but it’s still a nice coastal place to hang out for the day.

It was a pity it was so overcast as I was hoping for some nice photo opportunities, but the sky was a washed out white colour. The first place to start looking was at a spot called Salmon Rocks, which I figured would have a pink colour to them. As you may have noticed, I put a ton of work into coming up with that theory. 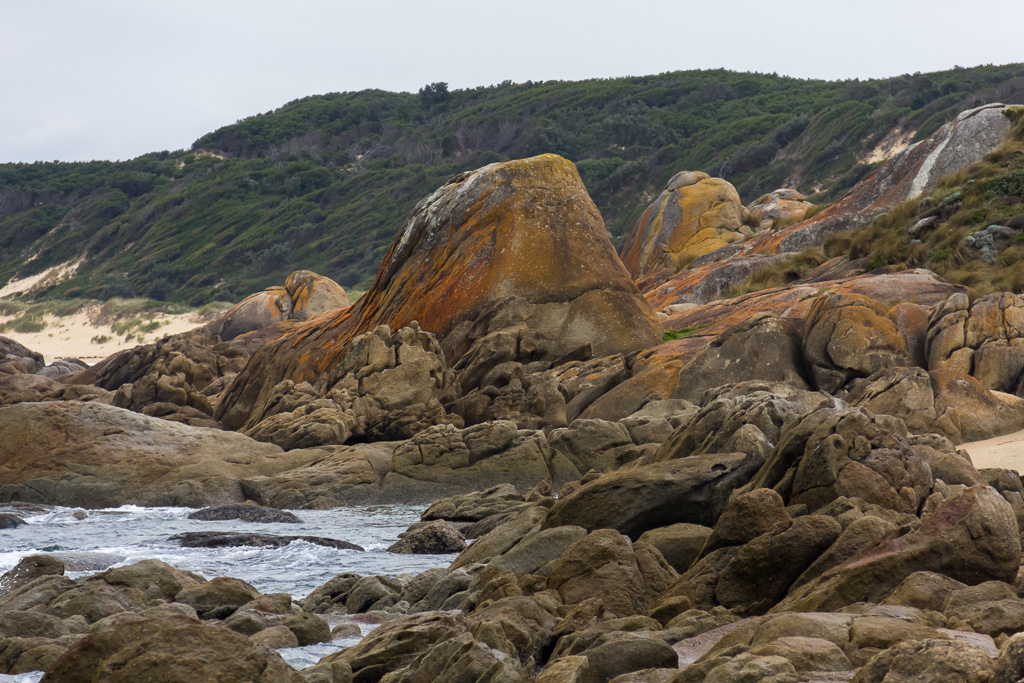 I guess if one squints their eyes and looks at the rocks whilst jumping up and down, they could appear salmon in colour. No doubt if the sun was out it would be a different story, as the drabness wasn’t helping the pink-ness.

MK spotted one large rock in the centre of all the others and I just knew she had to climb to the top of it. Those rock climbing hombres can’t leave rocks alone without having to clamber all over them. Well, she started climbing and I stood at a distance taking the odd snap whilst squinting my eyes and jumping up and down. I guess I should have been concentrating on the resident rock climber, but I must admit my brain was in neutral a little. 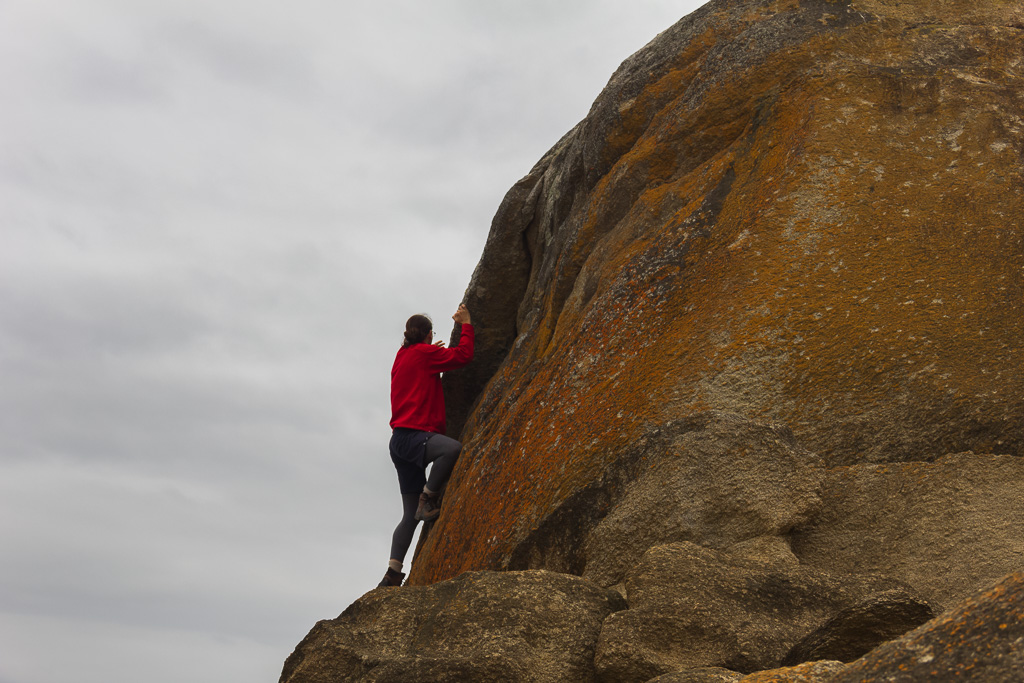 MK was getting close to the top of the rock when she decided to fall off. Now, if someone falls I kind of expect to hear some sound, but it was totally silent. If there was a little bit of screaming it would have been perfect, as I may have been able to get an action shot, but there was absolutely no consideration for the official trip photographer.

MK had fallen totally out of sight and there was no sudden popping up of a head, which would signal that all is well. I was a little bit apprehensive whilst walking forward to render assistance/take photos, as I imagined what would have happened if it was me who fell. She had fallen about four or so metres I suppose with a bit of rock bouncing on the way to… well… more rocks.

If that was me, most of Victoria would’ve heard the air escape from my lungs as I landed and then I’d probably be dead. I do not fall softly is the gist of what I’m trying to say.

Anyway, I arrived at the scene and she was breathing, which was a bonus. There was skin missing and what appeared to be a mega ankle injury, but I’ve found the Dutch have a pretty good constitution. The fear of growing up below sea level makes them all a little bit hardy and MK was surprisingly in one piece, except for a bit of blood spurting everywhere. The ankle was a concern though and the initial prognosis was a severe twist, as she appeared to land with most weight on the one leg.

She couldn’t walk, so I got my trusty Black Diamond Ergo Cork trekking poles (I just love saying that ridiculously long name) out of the car. With a bit of hobbling it was head back to the car time. On the way I spotted a crab hiding in a little pool of water, no doubt waiting there for the tide to come back in. 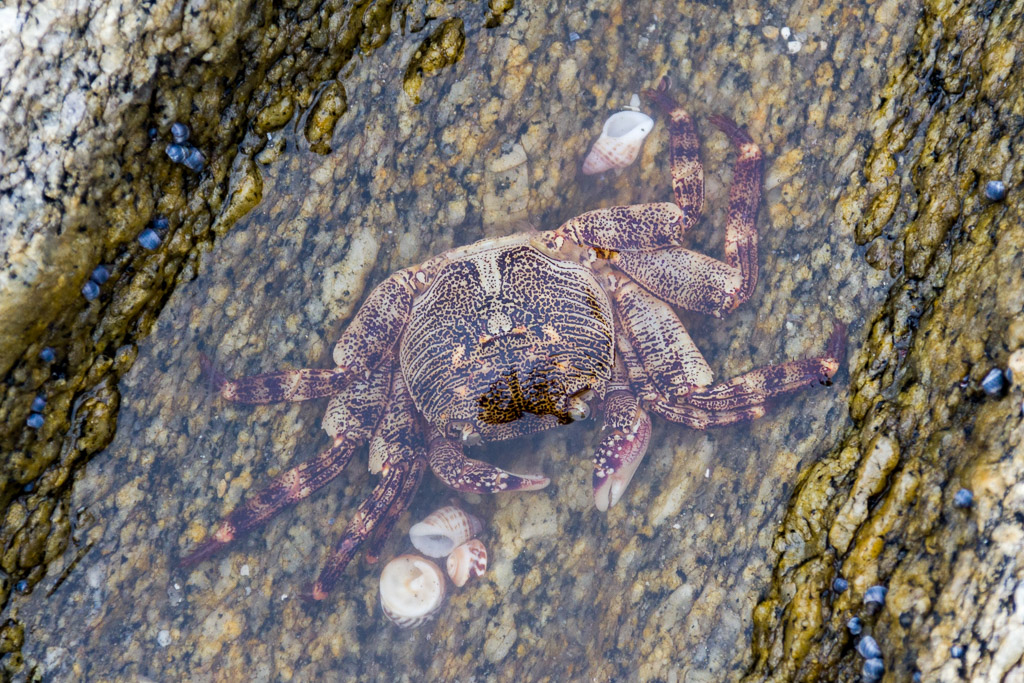 I had plenty of good ideas for the relief of ankle pain. Mainly an overdose of anti-inflammatory drugs, Panadol, heroin and amputation. She declined though. I thought that was it for the day, so I was a little surprised to hear we were now going to do the Cape Conran Nature Trail walk. It’s only a few kilometres, but I didn’t think walking on a dodgy ankle, straight after nearly snapping it off would be a good idea. Oh well. See? The hardy/crazy Dutch are at it again.

Anyway, MK had the sticks and we headed off on the walk, which didn’t really give us many sights other than thick coastal tea tree. There was some weird stuff on the way though, as at one point I ventured off the track a short distance to see if I could see the ocean. Whilst doing this, I came across a message stuck on a tree. It was clearly left by the Zodiac killer and I’ve emailed the FBI with my concerns to which I haven’t yet received a reply. I’m sure they have a team of people analysing it right now, as I tap this post out.

Zodiac Killer message. Can you decipher it?

It was pretty slow going with MK slowly dying from ankle pain and I was slowly dying from the lack of a view. I could hear the ocean, but couldn’t see it, so the only thing to take photos of were the odd tree along the way. 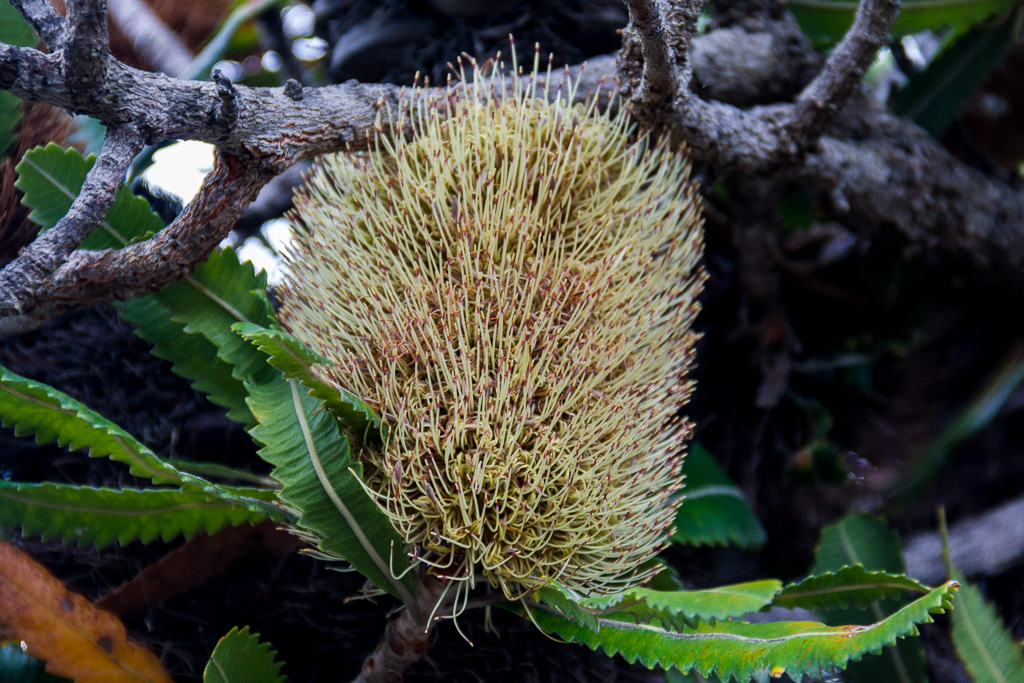 Finally the walk had come to an end as we reached East Cape Beach. I was intrigued to see ‘Sailors Grave’ marked on the map and I was hoping to check it out, until I found that there was no grave. It gets its name from shipwrecks in the area years ago. I do like an old grave and I was a little disappointed there was nothing to look at, so I’ve considered suing someone for false advertising.

It was then my job to head back and get the car, but this time I elected to walk along the beach instead of staring at bushes. It was quite nice, but the drab sky was killing my photos, so you’re not going to see any landscapes. There were the traditional seagulls flying around though and they seemed worthy of a few snaps. 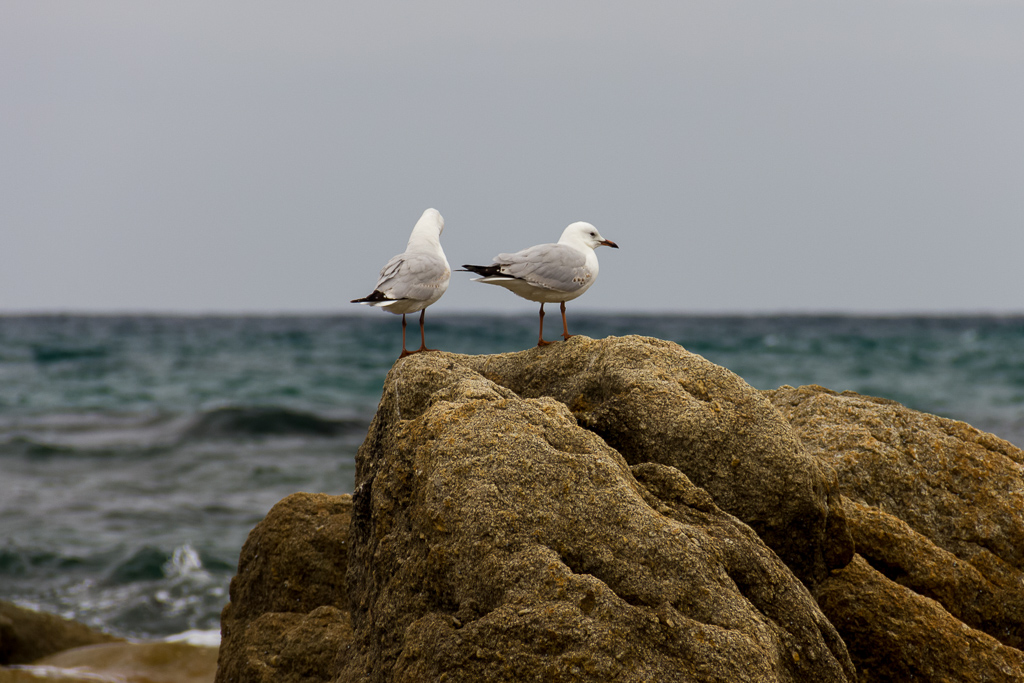 I also came across some quality pieces of driftwood along the way, which always make for a good photo, plus the odd pile of seashells. 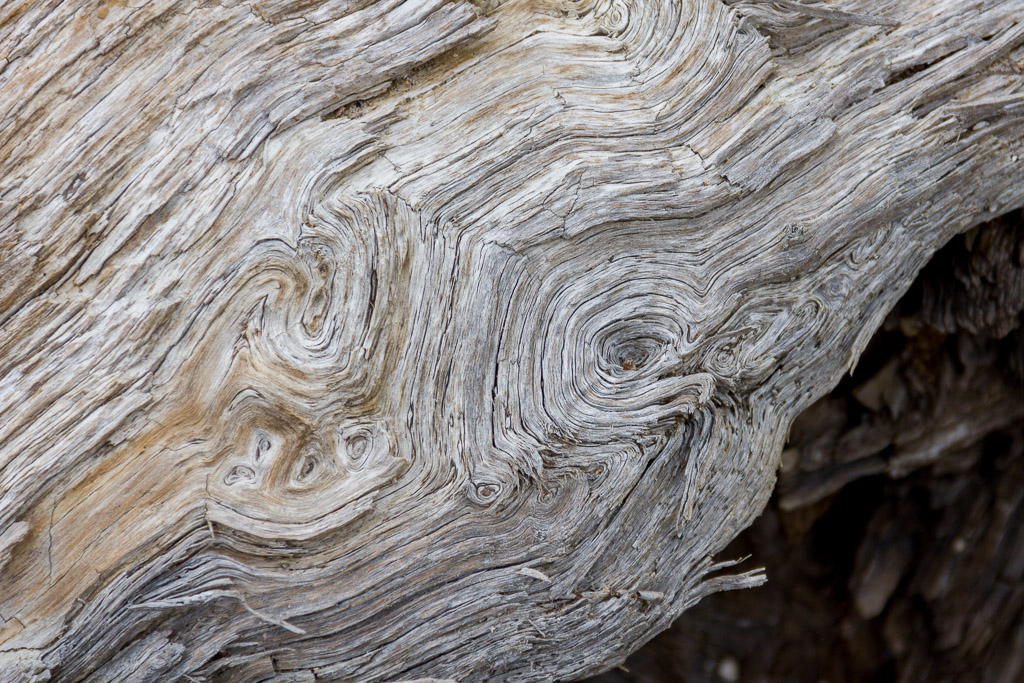 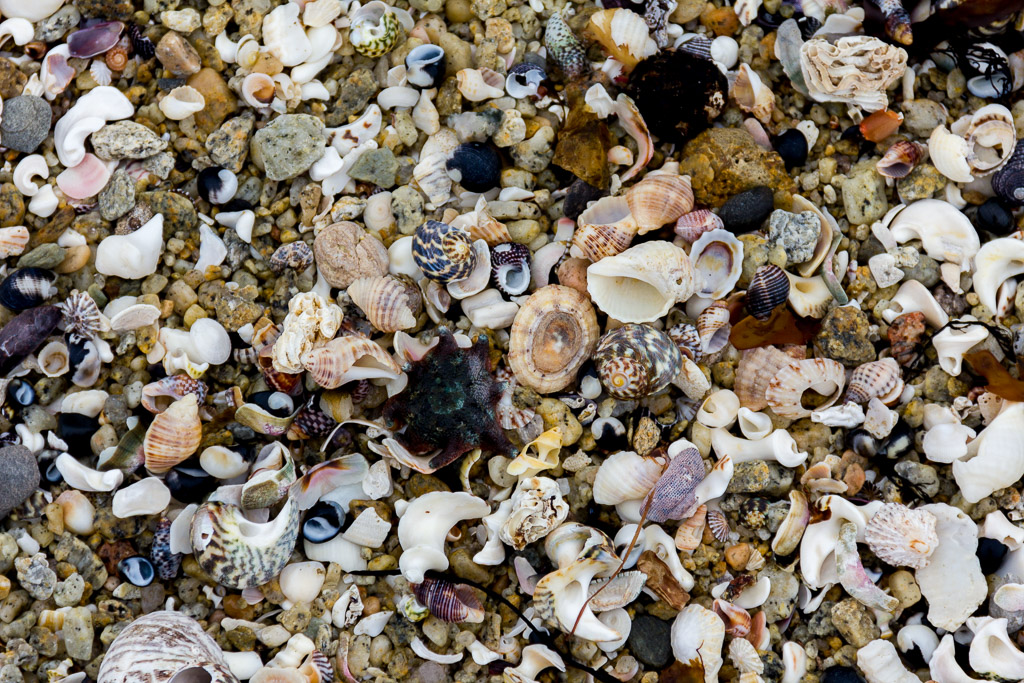 I finally reached the car and whizzed around to pick up MK who hadn’t passed away whilst I was walking back. It was time to say goodbye to Cape Conran as we’d really done all that could be done with a stuffed ankle.

The next stop was the Cabbage Tree Creek Flora Reserve to see Victoria’s only native palm trees. It was a short drive away and we were off with the sticks again on a walk that’s described as ‘ten’ minutes long. I left the GPS in the car, as the walk is kind of short don’t you think? I can certainly say the track is decidedly ‘ferny’, but with the ferns came about a million mosquitoes. 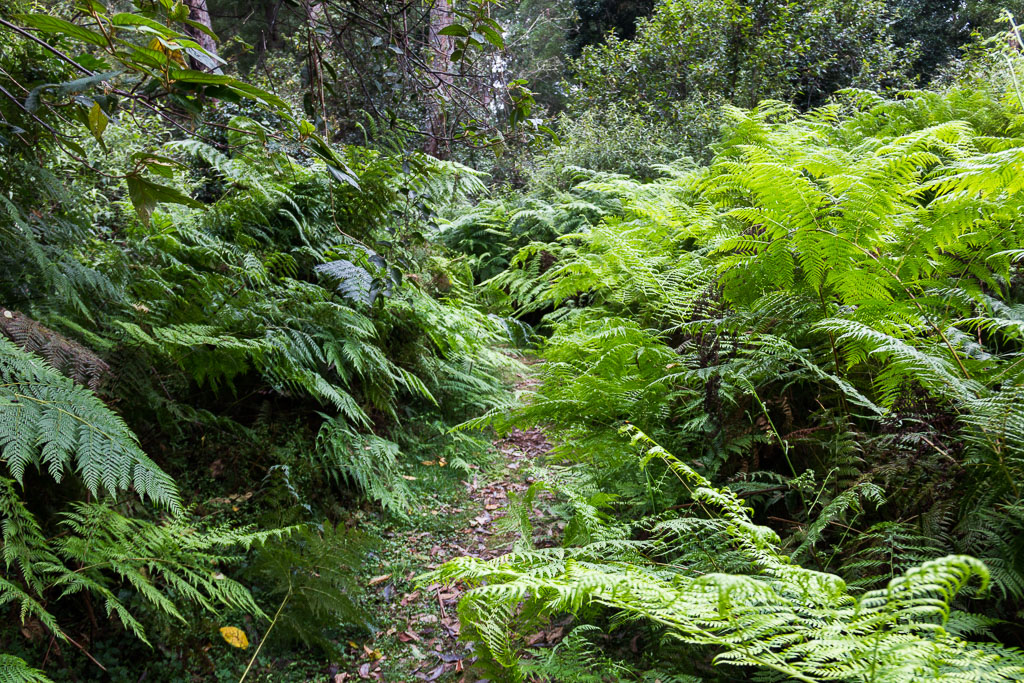 It was nice to check out the cabbage tree palms, which were dotted about the forest, although it was hard to concentrate as my arms were flailing around smashing mosquitoes in the head. MK who had to use the sticks was at a disadvantage, so she hobbled off at high speed back to the car, whilst I kept whirling my arms around during the ten minute walk.

I don’t think I’ve killed so many mozzies who’d already bitten me, as I had blood spots all over the place. I too had to pick up speed, as there were more mosquitoes on this walk than in a de Havilland factory. That may be the worse joke of all time, but sometimes one has to hang in there and stick it out. 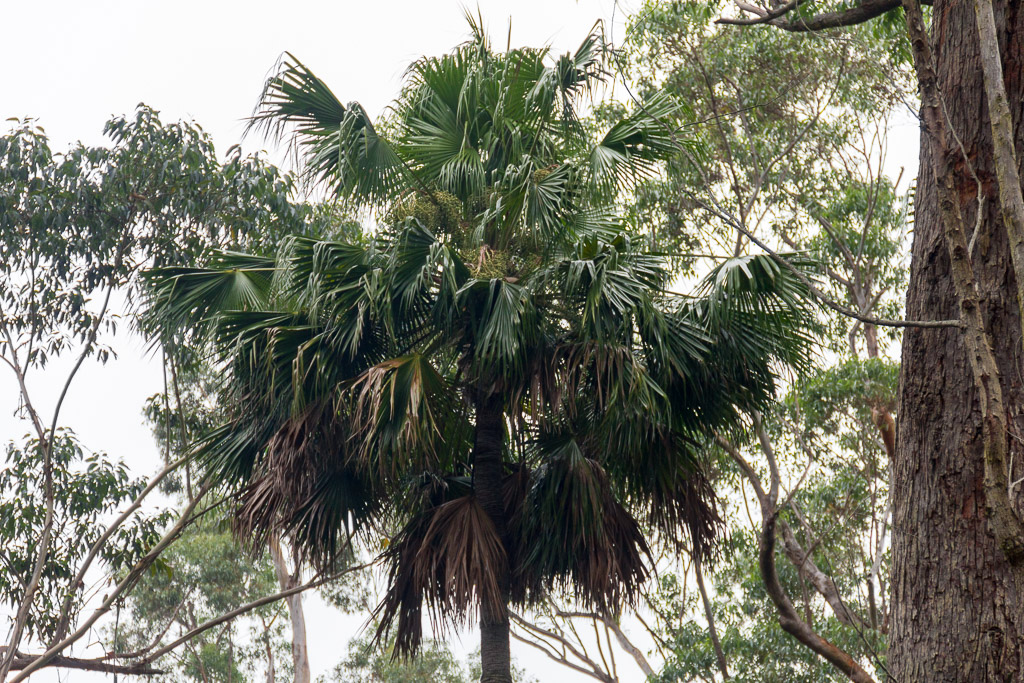 With the trees done, it was now off to Marlo, which again was a short drive away and this is where the Snowy River reaches the sea. MK wasn’t happy wanting to look at the river. No, she had to swim in it, even though the temperature was a little chilly. I stuck to my role as photographer and lay on the beach, whilst she hobbled into the water. 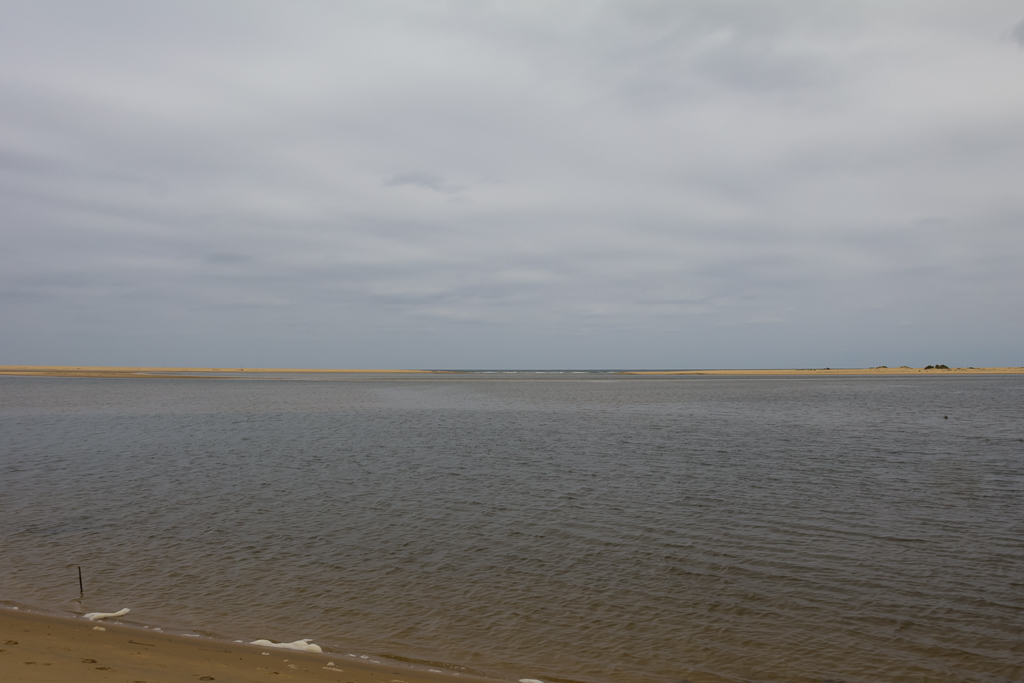 It looks bleak, but this is the Snowy River reaching the sea 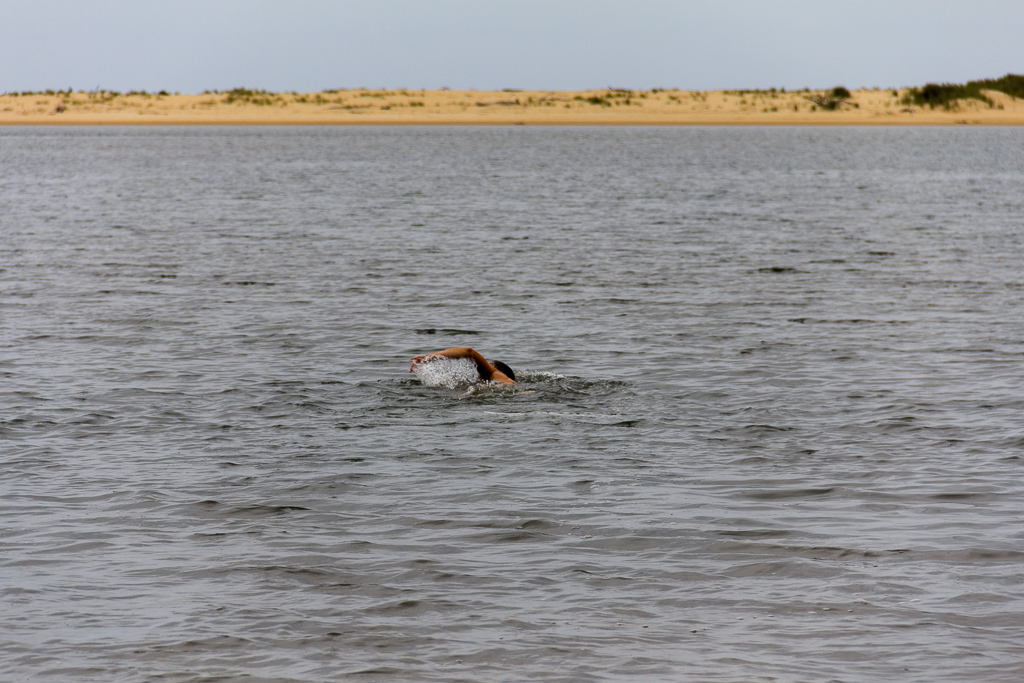 Well, that was about it. We’d followed the Snowy River from the mountains to the sea and there wasn’t much else to do other than head home. The last spot for a photo opportunity was the Stony Creek Trestle Bridge near Nowa Nowa, which sits besides the East Gippsland Rail Trail. It’s closed due to disrepair with the bike track running alongside it, but it’s still worth having a look. 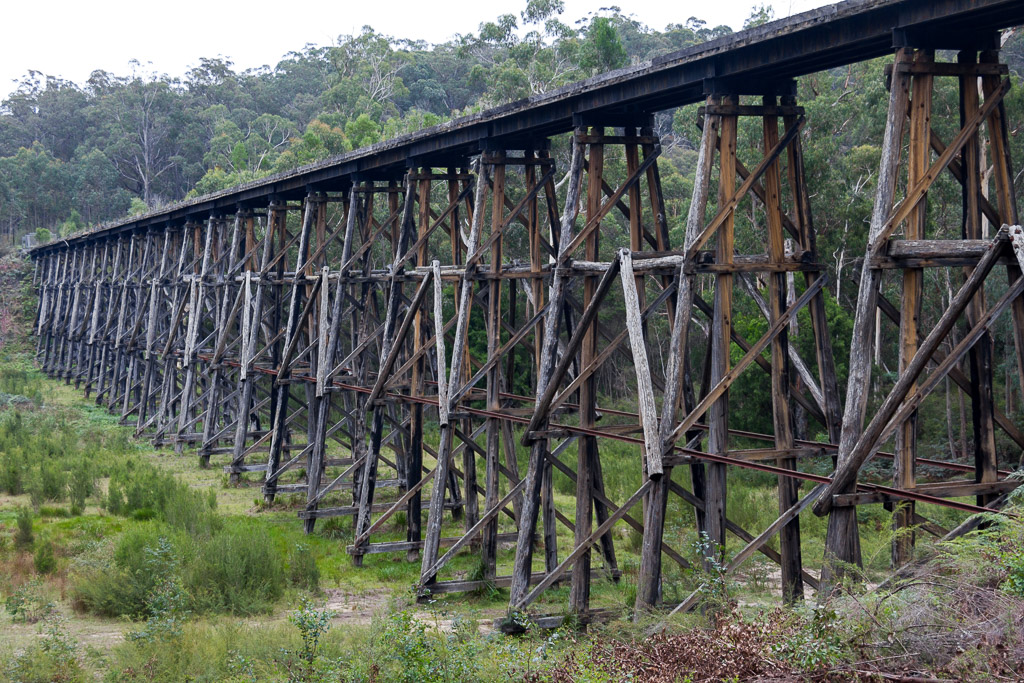 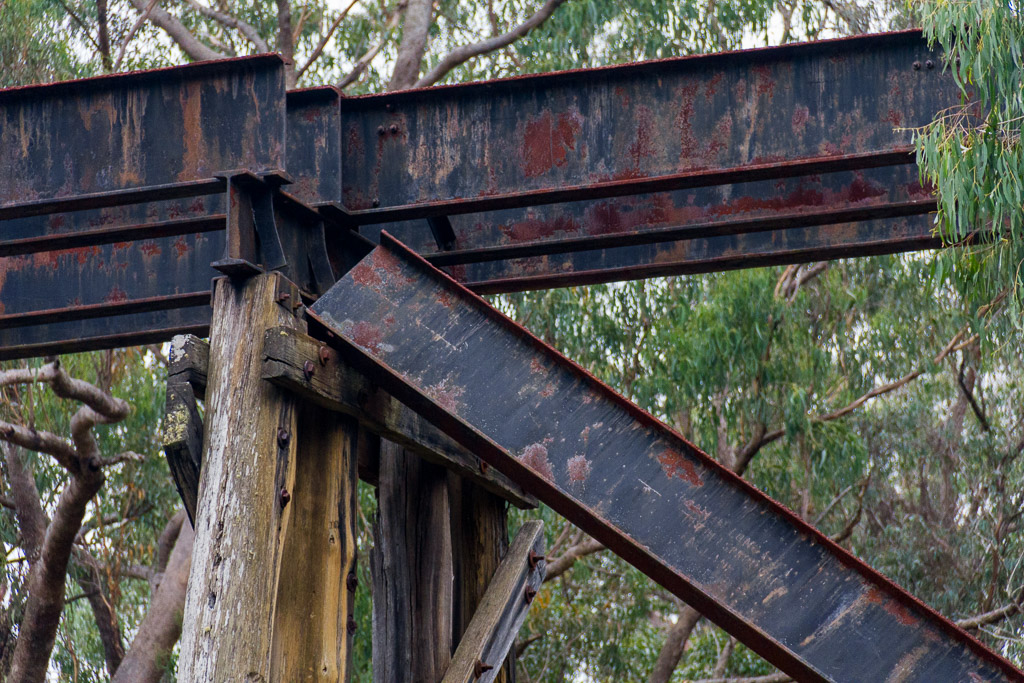 It needs a bit of work 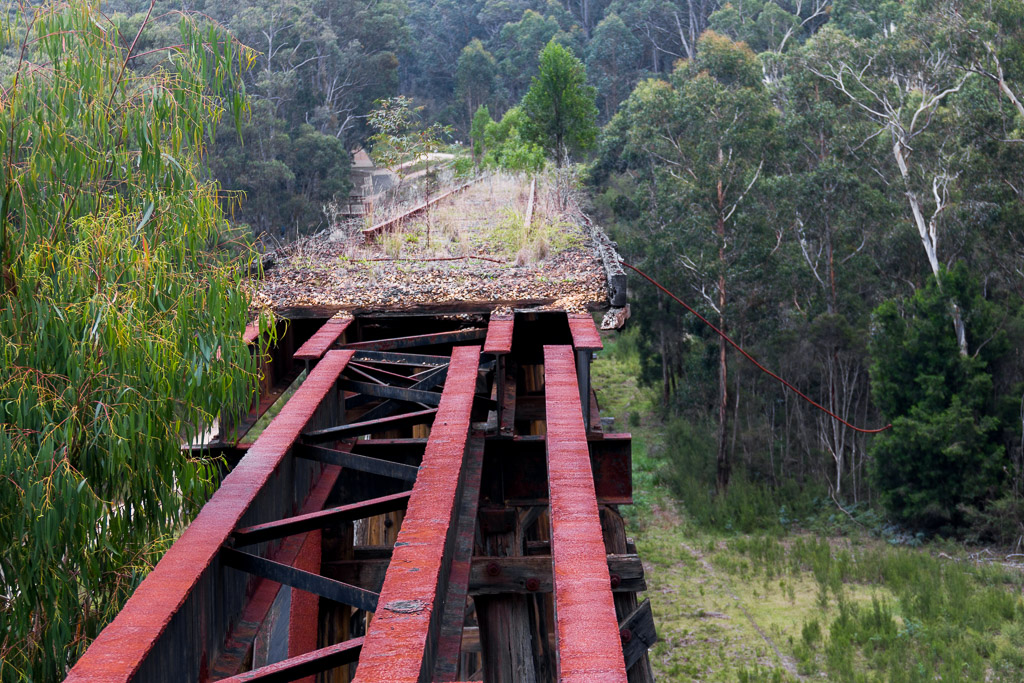 That’s about it for the road trip highlights, but to top off a day of weirdness I was distracted whilst looking at the bridge by a phone call from the nursing home my father’s in. It appears he’s showing more élan for trying to escape the home, than when he was a prisoner of war in World War Two Nazi Germany.

The old ‘out the window’ method is a tried and true method of escape, but the trouble is he has a walking frame, so one doesn’t have to be Carl Lewis to run him down. Oh well, that call rounded out another zany day from chest shaving blokes to a freestyle rock plummet fiasco. It was time to head home and try and conjure up some more worthy trips…