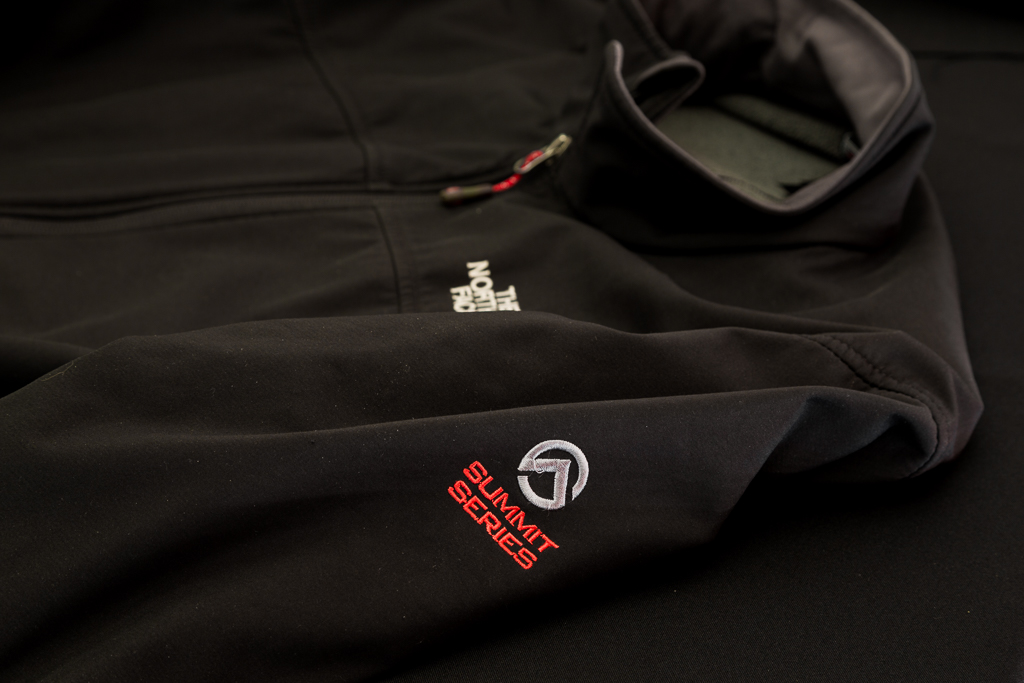 I first sat down and thought about what I take on every week-long hike I’ve ever done. This jacket is one of the items that always ends up in my pack. It was purchased a couple of years ago and I believe it has been re-jigged since and may not look exactly the same as mine. I bought it as a spur of the moment decision (I’m a sucker for an impulse purchase).

I was looking for a jacket for Ben in the North Face store in Melbourne. Guess what? Although Ben was with me, I ended up buying this jacket and he didn’t get anything. It’s tough being a kid sometimes. The first thing I liked was the cut of the jacket. It’s comfortable for the ‘big man/fat bastard’. I own a similar jacket made by Macpac, but it is a tighter fit as I think it’s made under the thinking that outdoor people grate their cheese with their chiselled abs. As a jacket I’ve found it perfect for hiking, waiting on a cold train platform in winter, first dates and freestyle Scrabble games. 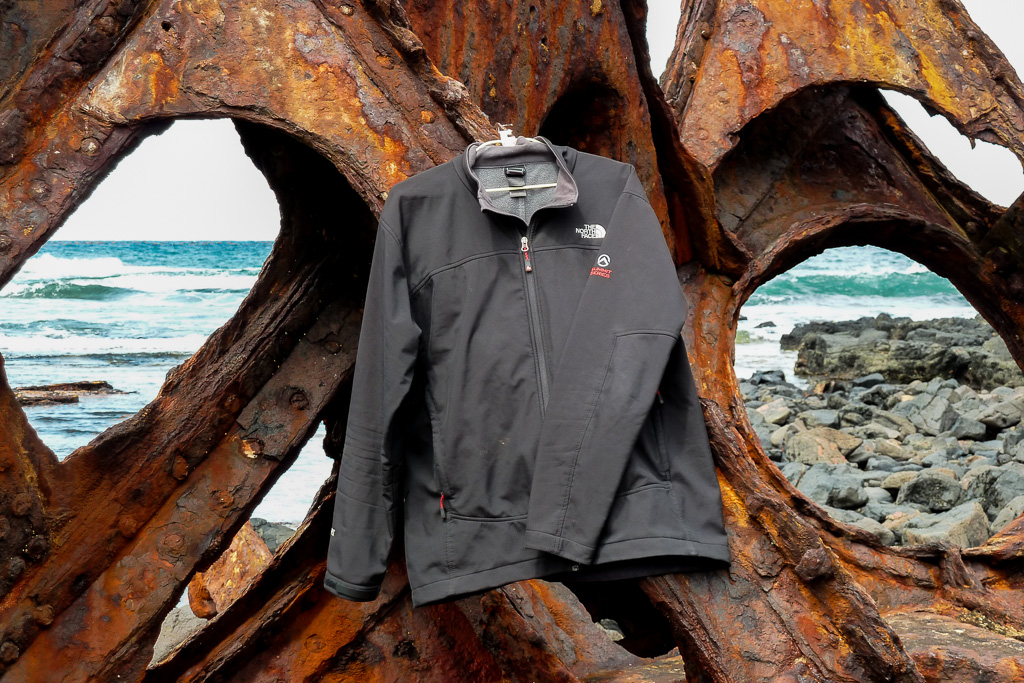 The jacket is light and is usually accompanies me on a winter walk. The fabric seems tough enough when bashing through scrub and bouncing off rocks. A bloke said to me one day, “Oh, that’s one of those shark-skin jackets isn’t it?” I replied, “Of course it is”, without having a clue as to what he was talking about. I guess he means the material has an almost wetsuit/shark-skin feel to it? Maybe. I think that’s what it does feel like, as long as you spin around a hundred times, jump up and down and then feel it whilst wearing a pair of oven mitts.

The jacket is magnificent when the wind is blowing. During my winter hike through the Croajingolong National Park, I was belted with rain and strong wind off the ocean for most of my walk. I found it blocked the wind effectively, which is quite obvious really when a massive ‘Windstopper’ is written on the sleeve. Maybe it’s the jacket placebo effect, but I felt the wind was being stopped because, well, because it says so doesn’t it? It dries quickly and retains its warmth whilst wet. True, I’m not hiking in the Antarctic, but for generally ‘crap’ conditions it’s more than capable. 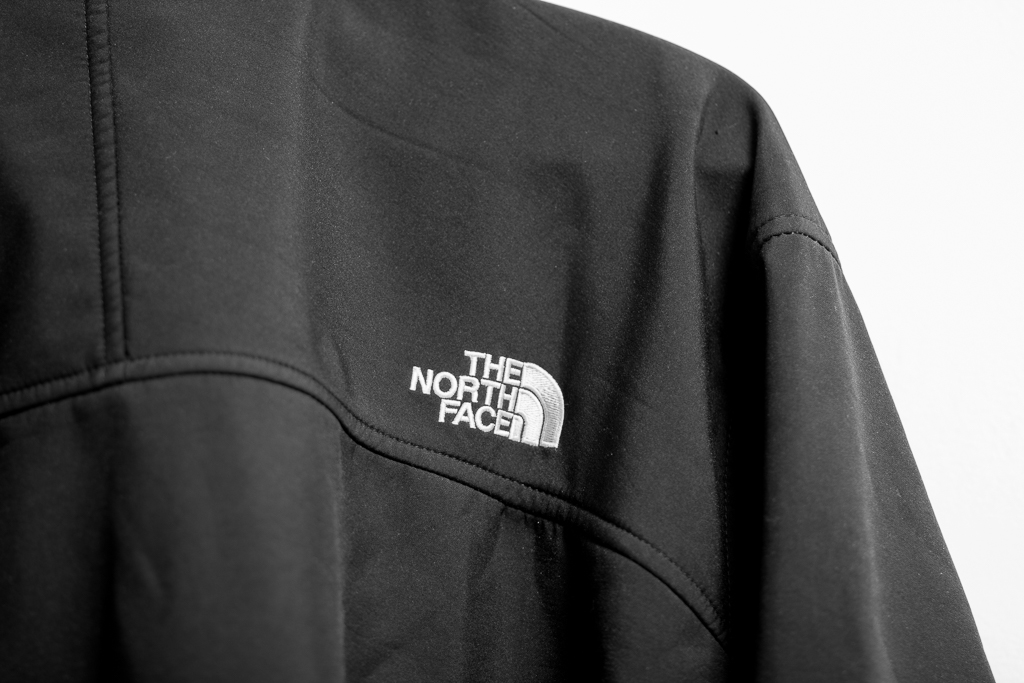 Logo on the back is the key to being assaulted

Now, an interesting thing I’ve noticed with North Face stuff is they have a logo on the back. I never realised such a simple thing could create a problem.

Whilst wearing the jacket my elderly father on three separate occasions has come up behind me and said, “Look! There’s something on your back!” and then belted me hard across the North Face logo. I was in two minds about this. Either he used it as an excuse to hit me, or he thought it was one of those rare, white logo painted spiders that get about. He has a disclaimer though, as he’s blind as a bat. I’ve just had to endure a punch or two, as he was actually trying to ‘help’ me.

When I bought this, the product was listed within the North Face ‘Summit Series’. This has a snazzy logo, which gives the appearance that it’s really good. I think it’s been sacked from this series now, as it’s no longer in the current catalogue. How good’s this review when you can’t get it anymore?!

Oh well, I’ve got one though, which is the main thing. The overall look of the jacket also works well during a fierce Scrabble game. If your opponent thinks they’re getting fancy with an arse kicking word with the letter ‘q’ in it, then draw their attention to the jacket, which you should be wearing as a prerequisite.

One look at the intimidating ‘Summit Series’ logo in blazing red fabric will reduce the ‘q’ using opponent to a blubbering mess, where they’re struggling to come up with any word better than ‘toe’.

It’s the key to victory and winning a game of Scrabble any way you can is worth it. It’s certainly more effective than my previous ‘guaranteed winning strategy’ of tearing my shirt off and roaring like an enraged Yeti every time I get a triple word score. It still works, but one ends up going through a lot of shirts.

So, there you have it. I’ve worn this continually for the past couple of years whilst walking in the colder months. During the Great Ocean Walk I wore it as my primary attire and left the raincoat at home. It worked well during one unpleasant morning of heavy rain, as it retains its warmth due to some sort of furry fabric on the inner. I think ‘furry fabric’ is the technical term for it.

It’s been worn on a few first dates and I guess it creates so much of an intimidating look to these women, they don’t want a second date due to fear. I believe it’s the jacket and absolutely nothing to do with me being a wanker.

One last thing. I checked the pockets whilst writing this and a hidden gem was revealed. Inside was a ticket stub to the Titanic exhibition that toured Melbourne recently. It made me wonder.

If this jacket had been general issue on the ship, then fewer passengers would have died. In turn, the subsequent movie could be a lot better with Jack surviving. This of course would lead to the perfect product placement, as Jack is lifted out the water in his North Face Sentinel Windstopper jacket…