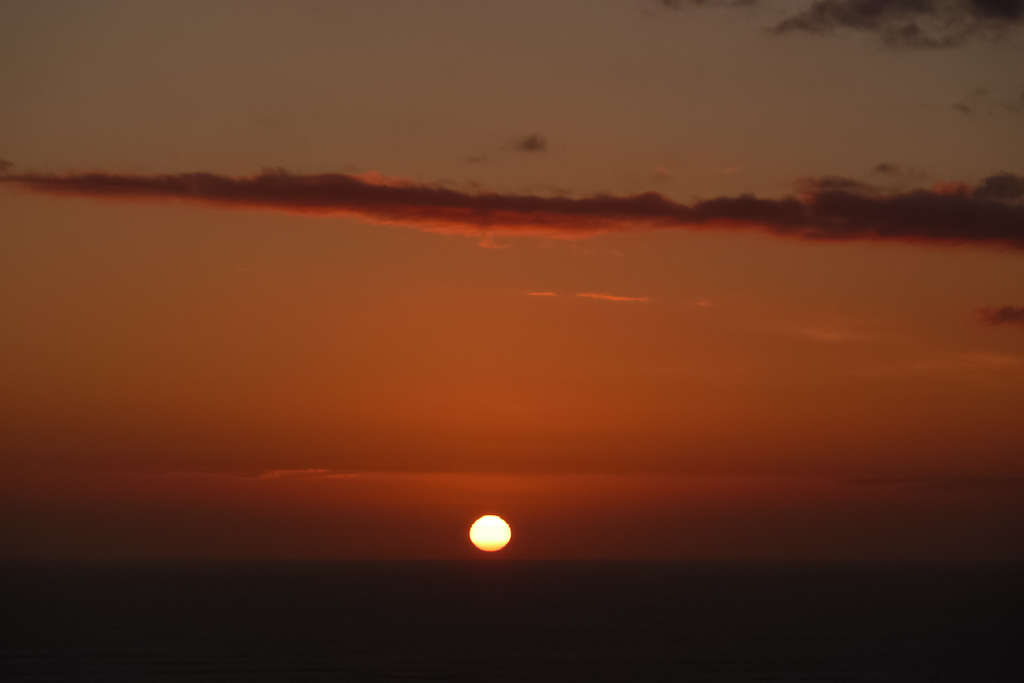 Hang on, didn’t we have Day 7 of the hike on the 5th October already? Have I gone delirious and mixed up the days and dates? Well, no I didn’t (I love these conversations with myself. It beats talking in the mirror).

I had about 10 or so km to the Princetown General Store, which is where my car was parked. The official end of the hike is further down the road at the 12 Apostles. Unfortunately, I had walked this section the previous year, so I knew how much of a shocker it is.

Consisting solely of walking on a sandy road with absolutely no view of the ocean, but plenty of nice views of barbed wire fences, cows and the odd 4WD. It’s mind numbingly dull, unless one has a particular interest in bovines and the latest model large car. Apparently in 2011 the end of the hike is being re-aligned and it can’t come soon enough, as it’s a complete anticlimax right now.

Anyway, I went to bed after the sunset at Devils Kitchen. I had a bit of a melt down though, as I couldn’t remotely sleep. I guess the joints were starting to ache a little too much. Lying on the ground wasn’t helping for recovery and I found myself boiling as if I was sunburnt. I was well covered when walking, but my hands and face were a little burnt. Even though I live under a hat when the sun is out and with sunscreen applied. I also had the world’s itchiest feet which were driving me insane. Maybe my idea of only taking one pair of socks for a week long hike was a little ambitious regarding the weight saving department?

Continually, I rolled around in the bivy bag moaning and groaning when a small snippet of an idea began to turn into a monster. How about I pack up and walk out in the dark? I thought about it for half an hour, weighing up the pros and cons.

Pros… As it’s dark, I won’t see how rubbish the end of the walk is along the road. I then get out of clothes, which felt as if they were attached to me due to their filth. Have a shower, some cream for the itchy feet followed by a snack of something. To top it off, I sleep in a bed, which would be a relief after sleeping on a deflated mattress all week on the ground.

Okay, cons. I would miss seeing cows. A road snaking off into the distance. Instead of 10 km, it feels as if it’s a million miles long. Oh, plus another day of insanely itchy feet.

These are tough options, but I carefully considered them over about 2.3 seconds, before leaping out of the bivy. I was going home. One aspect of the bivy lifestyle is it takes seconds to pack up. Within 10 minutes I was ready to go with my headlamp on.

I’d bought a new lamp before this trip. A Petzl Tikka XP2 (who comes up with these names?). It seemed great though in that it’s light and it has a red light feature that’s perfect for keeping the night vision whilst looking for something in the dark. Plus, as an added bonus I felt like I was a U-Boat commander when I had the red light switched on. Anyway, the lamp would get a try out over the 10 km walk in the dark, so it was a good time to see whether it was worth the $100 price tag.

Around 10 pm I set off and the initial 400 metres felt like 400 km. It took me a little while to adjust walking in the dark where depressions in the ground can be hard to see. The early part before the barbed wire lined road was on a winding path in the bush. I carefully negotiated that without falling over and then I was on the infamous sandy road.

I must say, I couldn’t see anything on the outside of the headlamp beam and I have to admit the road never looked so good as a result. There was no moonlight either, so it was inky black walking. There was a small light on a hill in the distance, which I assumed was Princetown, so I had a bit of an idea how far I had to go.

I soon settled in a routine and to keep myself entertained I would switch my headlamp off now and again. I even tried the red lamp method, which I thought would give me some night vision, but while I found it was perfect for being under attack from depth charges, it was not so good for walking.

It was all going to plan, as I began to make good time. A couple of times I heard something big, jump through the grass and bushes to my side. I assumed it was a kangaroo, but every time I whirled my head in the direction of the noise I saw nothing in my light beam. I don’t believe it was the little known ‘Princetown Sasquatch’ but you never know. Occasionally, I’d hear dogs going mental, barking in the distance, which gave a bit of a weird vibe. I felt pretty safe though in that I had my week long socks for protection.

After two or so hours I reached the target light and powered up the hill that Princetown sits on. I had called the general store to let them know I was on my way in the dark to get my car. They sounded a little surprised, but I explained I was a tool, which helped them understand. Finally I saw the car and although I find it a little sad when I finish a hike, I do enjoy sitting on the leather seats in my car. The luxury!

I took some final photos of the GPS noting it was almost to the kilometre in distance walked to the reading I had the previous year. It was interesting to see my maximum speed was 17.8 kph at some stage. I don’t think I’m that fast a walker, but I surmised the speed was actually my falling velocity when I fell onto rocks earlier in the day! 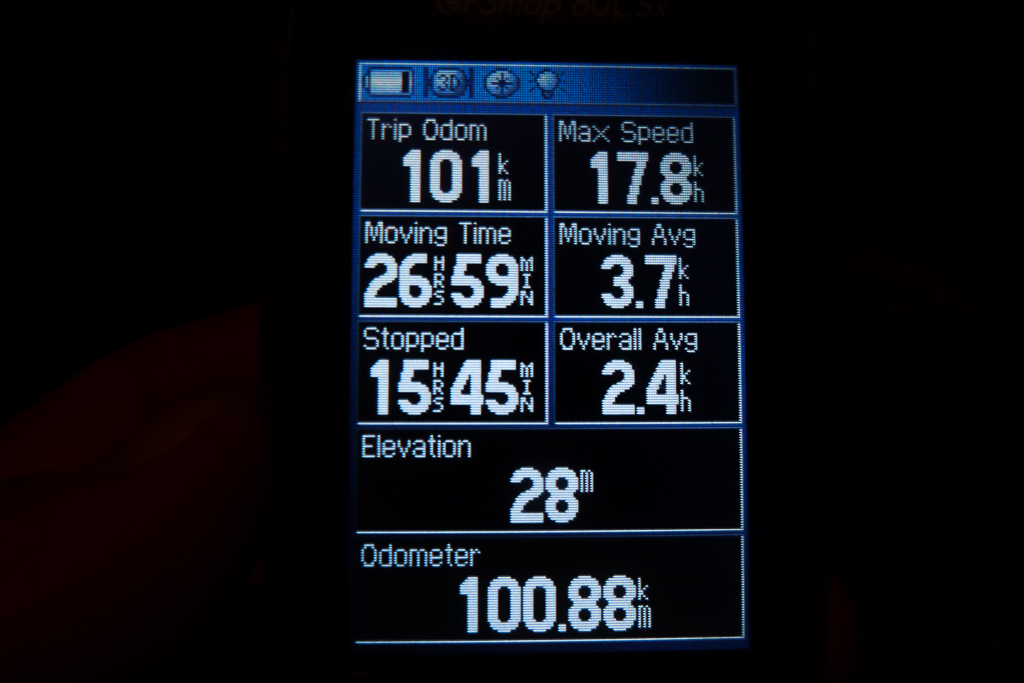 I also noted the total height climbed for the week being 3199 metres. Wow, another 2000 metres and I would have made Everest Base Camp?! I was then into sandals and sitting on the leather seats driving away at about 1.30 am. Now, should I come back and do it again another year…? 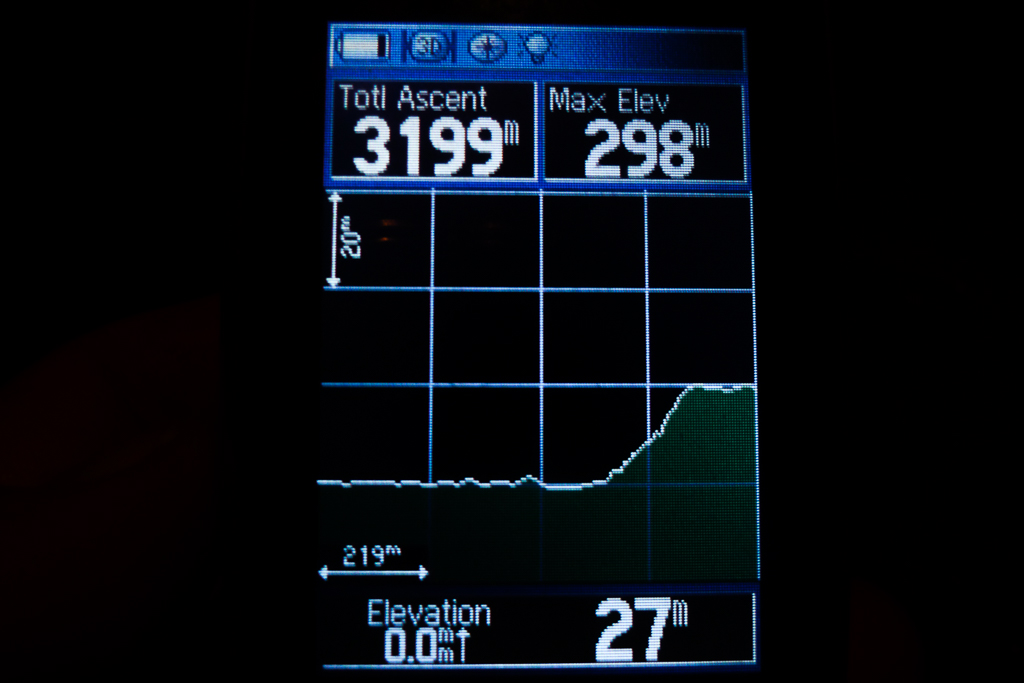