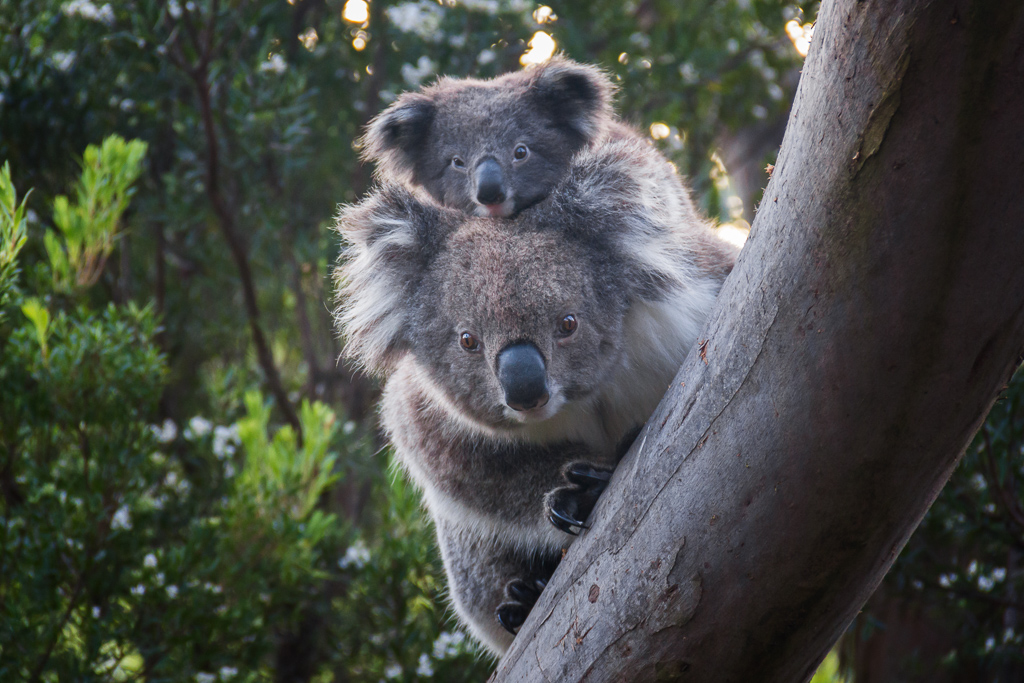 The night spent at Blanket Bay was peaceful. The only noise during the evening was a mild dose of screaming, which was coming from my spine. As per my last post, this was due to my lovely sleeping mat failing in its main task. Holding air inside.

Yes, it was a little uncomfortable lying on the ground. Before going to bed, I’d pump it up, but it would be completely flat within hours. Not the greatest fun, especially how the hike had only started. I still had five more nights to go.

At least I had a comfortable pillow, as I like to use an inflatable version for a bit of luxury. If I’m being a real weight nut, I’ll leave it at home, but this time I’d brought it and usually it gives me a better sleep. In the last sentence, did you notice the word ‘usually’?

You just know what happened. Besides waking up in the middle of the night on a deflated mat, I also found my pillow was a little skinny. It too had fallen victim to the, ‘I won’t hold my air any more’ caper. Huh?

Sleeping and equipment-wise, this hike wasn’t going great. Maybe the gear was fine, but it was my beefiness killing my stuff? I know when I’m putting on weight when Ben starts calling me ‘ass man’. It’s almost semi-believable to think my largeness may have contributed to the sleeping mat failing. Regarding the pillow though, surely my head is not fat enough to crush the air out of it? The drama was I was now carrying two items, which should provide luxury, but were now completely useless and essentially ballast.

It reminded me of a route march in the army, where we covered 100 km in two days, but I was carrying a heavy radio that broke within the first 300 metres of the walk. I might as well have carried a bag of cement, as at least I could have used it as a pillow.

Oh yeah, the pillow. It’s a bummer, as I like to sleep with a bit of vertical action to my head. If only they could make a hiking banana lounge, then I’d be set. Made out of titanium preferably and maybe some striped colours for a proper hiking ‘look’.

Anyway, I packed up and took my time about it. I was looking forward to the walking though, as I remember this leg being one of my favourites from my last visit. Blanket Bay to Cape Otway, Great Ocean Walk was an interesting day. About 13 km following the coastline before reaching Cape Otway Lighthouse.

I wasn’t the only one who was slow to get away. The super-sized group who’d arrived late the previous day were pretty lethargic as well. This surprised me, as they told me they were attempting a double-leg day, by skipping Cape Otway camp and going to the next at Aire River.

Well, their idea sounded like fantasy, as when I set off at 9.30 am, they still had tents up. I had no doubt I’d be spending another night with them at Cape Otway.

Heading off, I was struck by a photographers curse. The sky. It was a blanket coverage of white cloud, which essentially sucked the light and contrast out of picture taking. 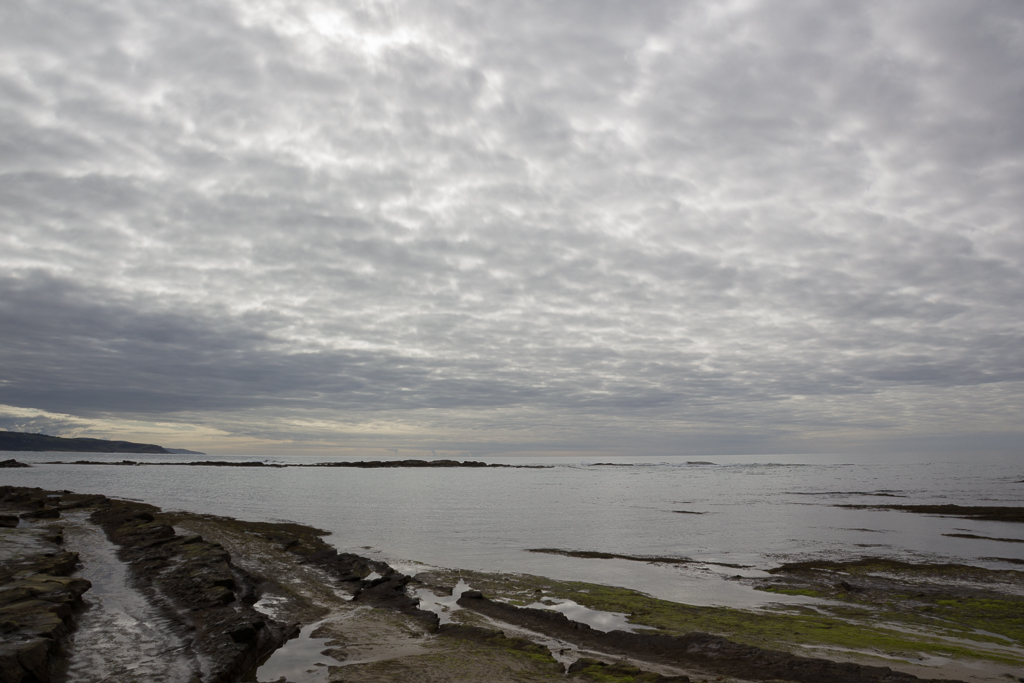 Wandering on, my first target was Parker River Inlet, which was only a few kilometres away. Firstly though, I had to slog up his brother, Parker Hill. The track was nice and dry and I took it easy, taking a few photos along the way. Pity none of them are good enough for the blog.

Continuing on, it wasn’t long before I was descending into Parker Inlet and my only decision point for the day. Not much thought was needed though. The tide was low, so I wanted to walk at the base of the cliffs along the rocks. I’d done this the previous year, so I knew the rocks are flat and make for easy walking.

I saw a couple of girls at Parker Inlet hiking who must have come from the opposite direction. They elected to take the ‘high tide’ route inland, which I thought would be the dull option of the two. 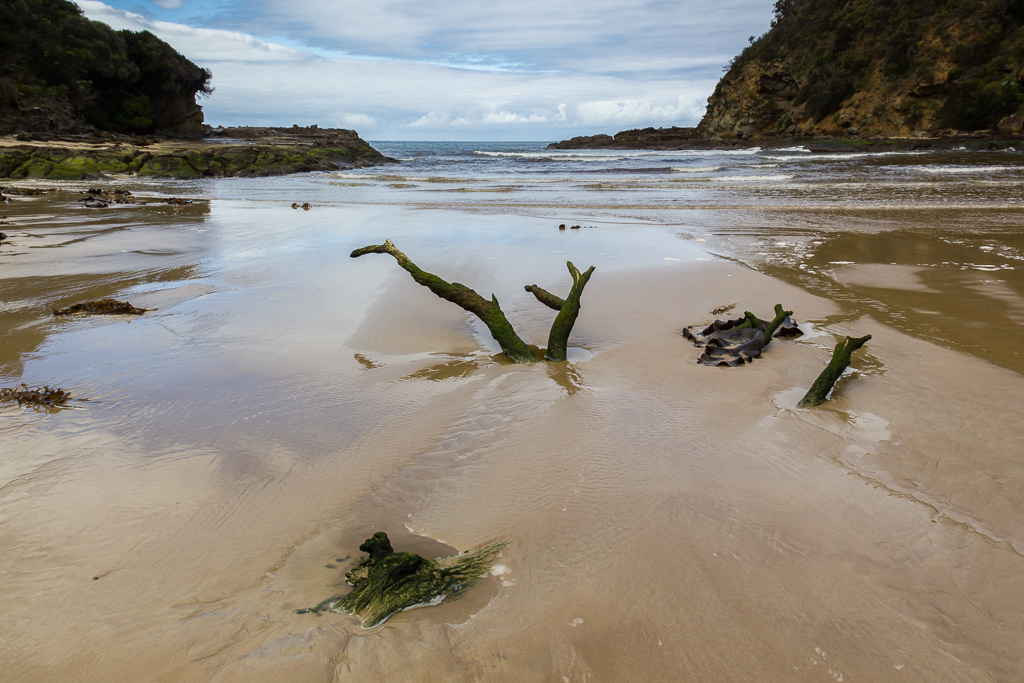 Strolling onto the rocks, I kept noticing something in the distance. A few hundred metres from the shore, a black object kept popping up. I couldn’t work out what it was and wish I had a better telephoto lens. It was either a seal, whale or a Chinese submarine with Harold Holt at the controls. Here it is. Could it be the mythical Parker River Monster? 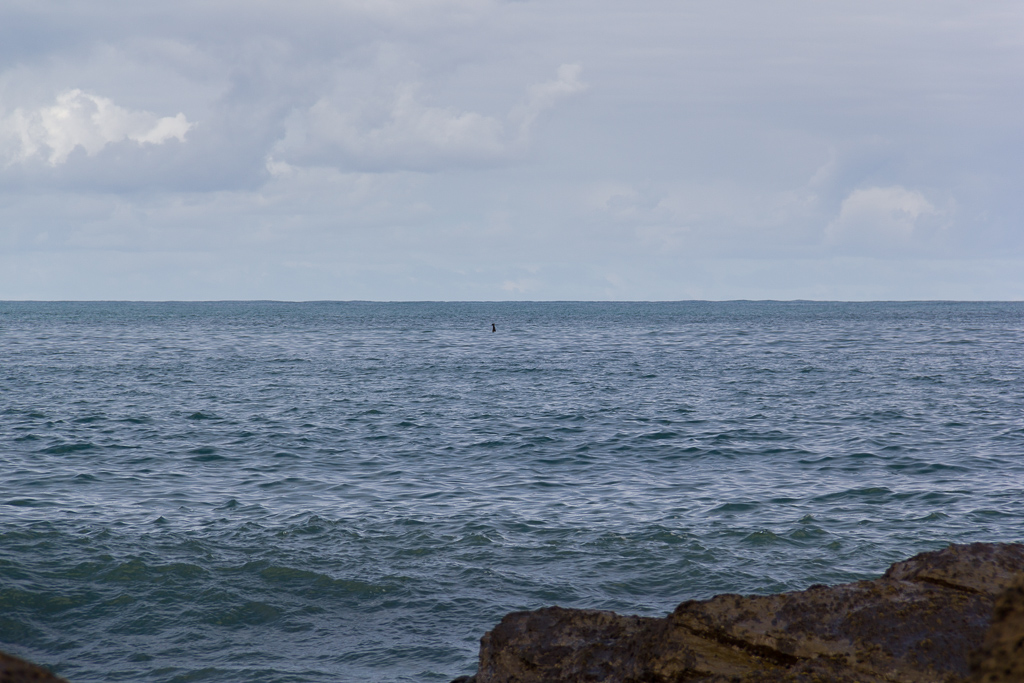 There’s something out there

Ignoring monsters of the deep, I made my way across the rocks. In one area, there’s a number of pieces of rusted steel. I assume they’re part of a shipwreck from the ye olde days. There was a large bulbous looking thing, which was quite interesting. 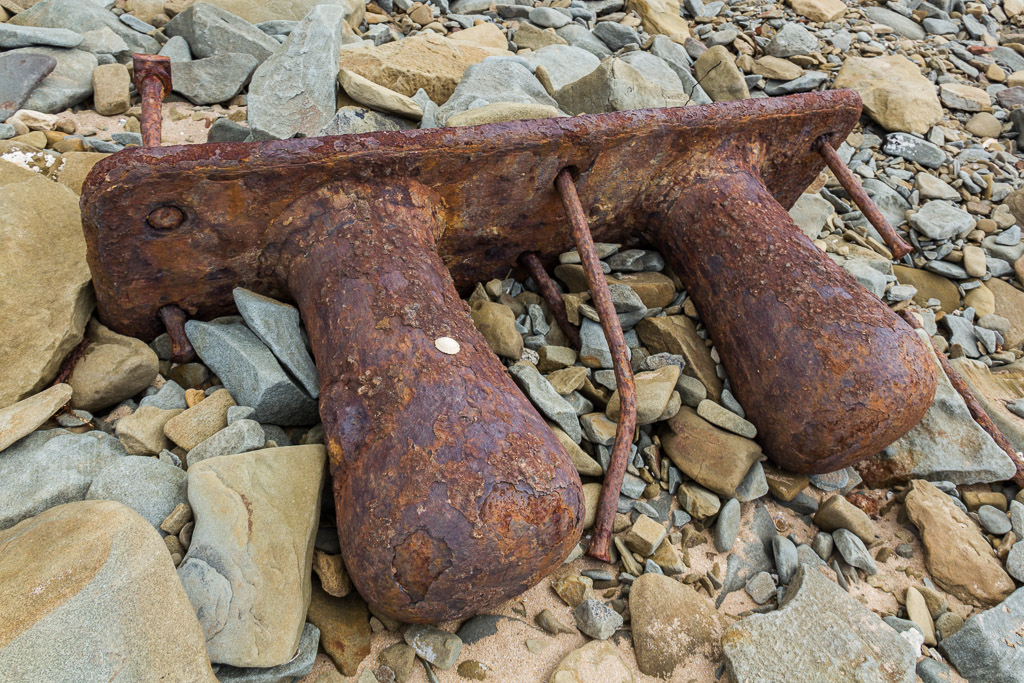 I couldn’t find anything on the great new map to enlighten me, so I’ve no idea which ship it was from. 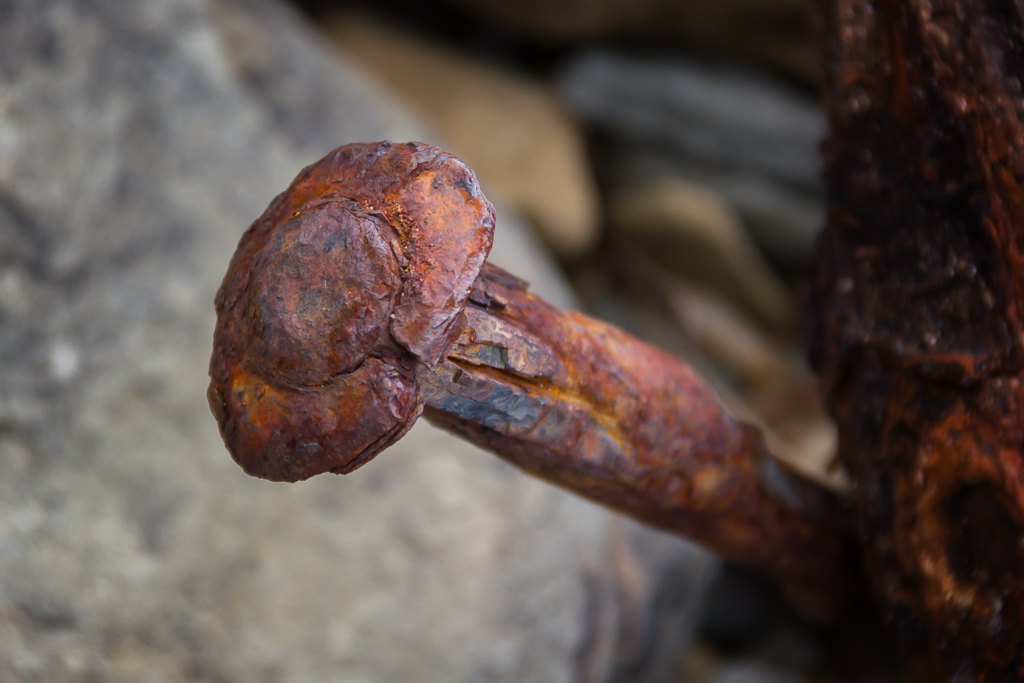 Continuing on, I began to see the Cape Otway Lighthouse. The previous year, the lighthouse, which is the destination for the day is seen early, but for some reason it takes an eternity to get there. 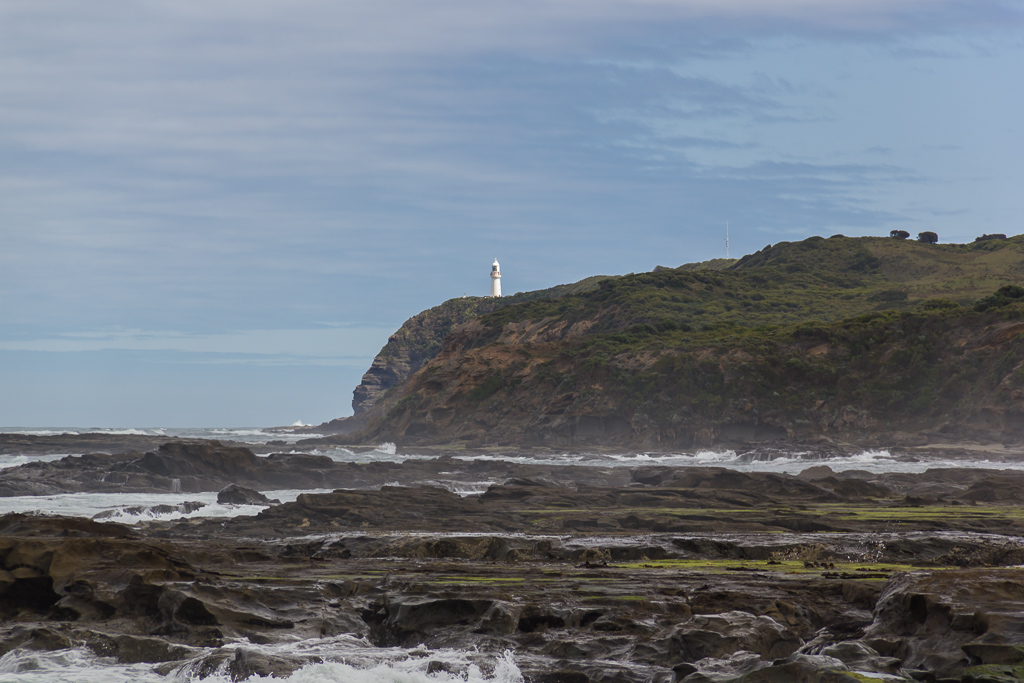 It’s an entertaining walk though, as besides the shipwreck, there are some interesting rocks to peruse. A number of perfectly round holes are dotted across along the way. I’m sure there’s a geology answer to this, but I can’t be bothered Googling it right now. 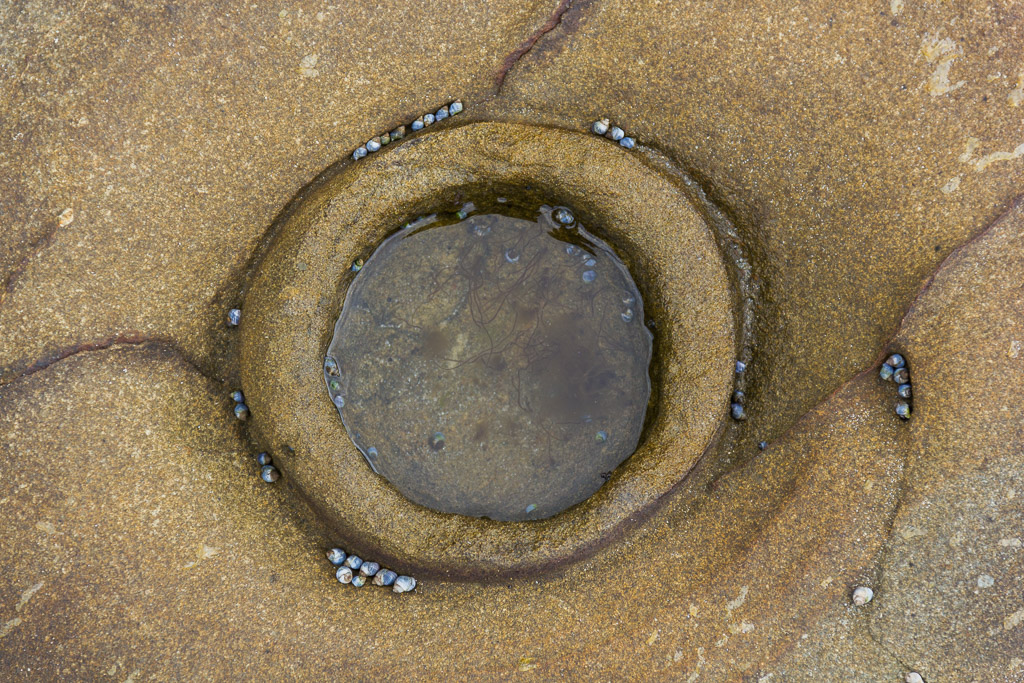 After about an hour of walking, I came to a beach area, where the path heads off inland. As anyone who walks this hike would know, there are a number of inland sections which tend to be rather dull, compared to the coastline. I believe the reason is some landowners haven’t given permission for Parks Victoria to put the path through their properties? The result is the occasional dogleg to go around them.

Oh well, I guess they want to enjoy the view and not share it with anyone else? I guess they bought the properties years ago and can claim some ownership, complete with multiple signs, such as, ‘KEEP OUT. PRIVATE PROPERTY ONLY’? One can almost see the anger in the ink of the sign. Fair enough, you were here first. Hang on, shouldn’t it be the Aborigines who get the first choice then? Silly me, I forgot, we wiped them out in the southern states years ago.

On I went, climbing past a private property, until I reached the road which leads to the lighthouse. It appears the path was created by a sadist, as it follows the road, but what’s interesting is the road tends to be flat, whereas the the walking path goes on crazy roller-coaster undulations up and down hills.

I did come across a great find though. A koala and joey were in a tree quite low to the ground. Plenty of cars were whizzing by, oblivious to what I was looking at. The furry beasts seemed quite non-plussed by my presence, so I took a few photos before leaving them alone. 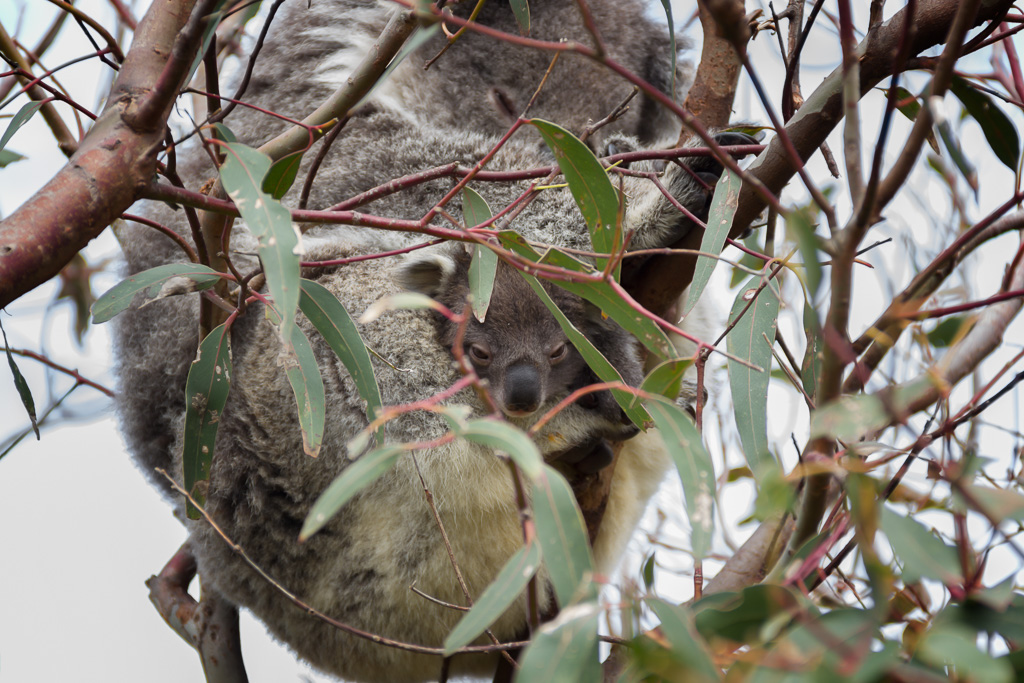 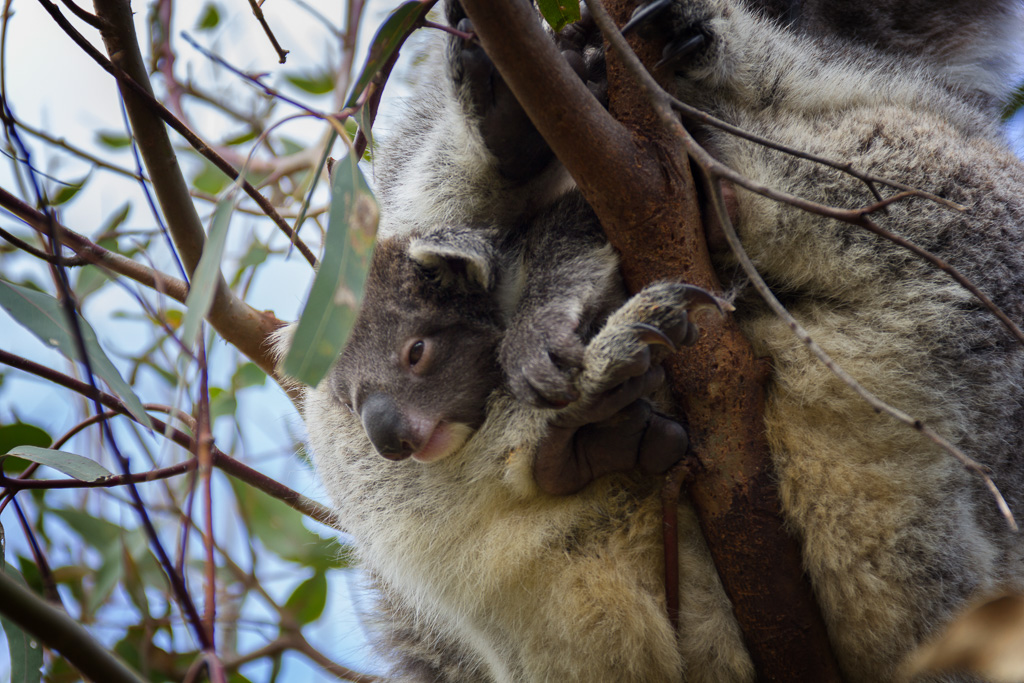 I soon reached the lighthouse and I found it was really jumping. The carpark was full, so it’s a popular place. Being a lighthouse addict, I was always going in to have a wander around, even though the entrance fee felt a bit steep. There was another reason for wanting to go in though. The cafe.

It’s the last place for the rest of the hike to get some fresh food, so I went in and made a bee-line for it. Even though it was crowded, I managed to find a window seat and settled down for a cuppa. I then noticed how it seemed everyone was talking absurdly loudly. Maybe everything seems louder after spending a few quiet nights in the bush?

Speaking of noise, there was a woman on the table next to me who was nudging the Richter Scale with her insanely loud voice. What made it worse is it was very high as well. Similar to a squirrel on helium? I was just absorbing the shrill, as she was worked away on an Instant Scratchie ticket. Then the volume went higher, as proclaimed to the world, “I’ve just won $25,000!” I almost choked on my quiche.

I left money-bags and bought a take-away vegetarian wrap, so I was set for the evening. An obligatory tour of the lighthouse was enjoyed, plus a wander through the other buildings. 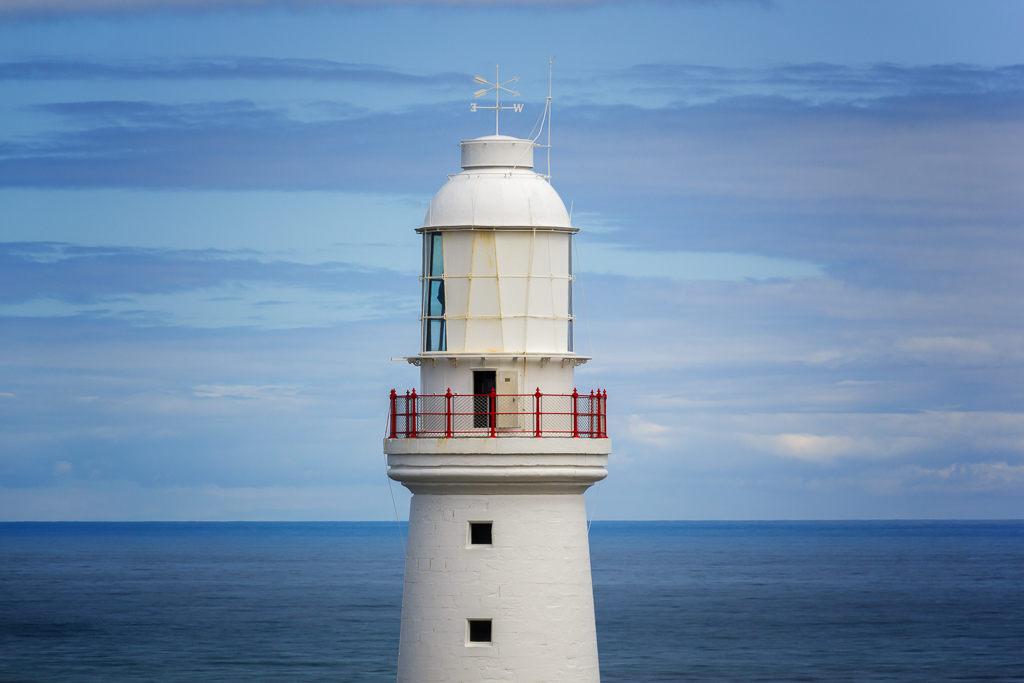 What’s interesting is there was a bird of prey of some description, sitting high up on the lighthouse. Again, a better zoom lens would have come in handy. 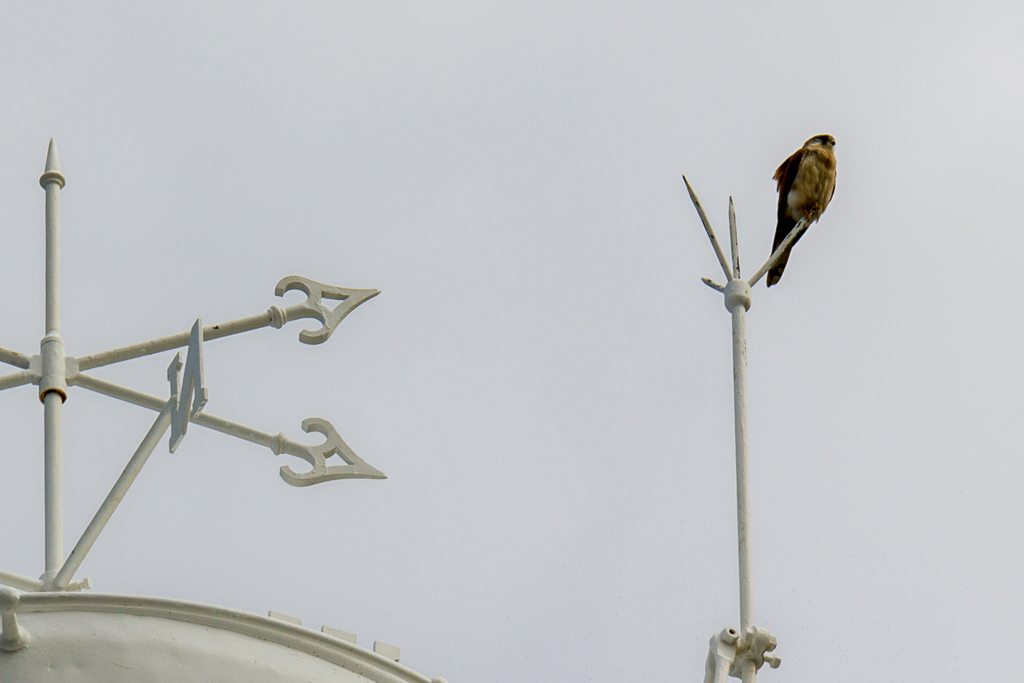 Keeping a watch on things

Before leaving, I took a snap of a weathered flag hanging forlornly. There was one thing about the day. No wind at all, so it’d been comfortable walking. 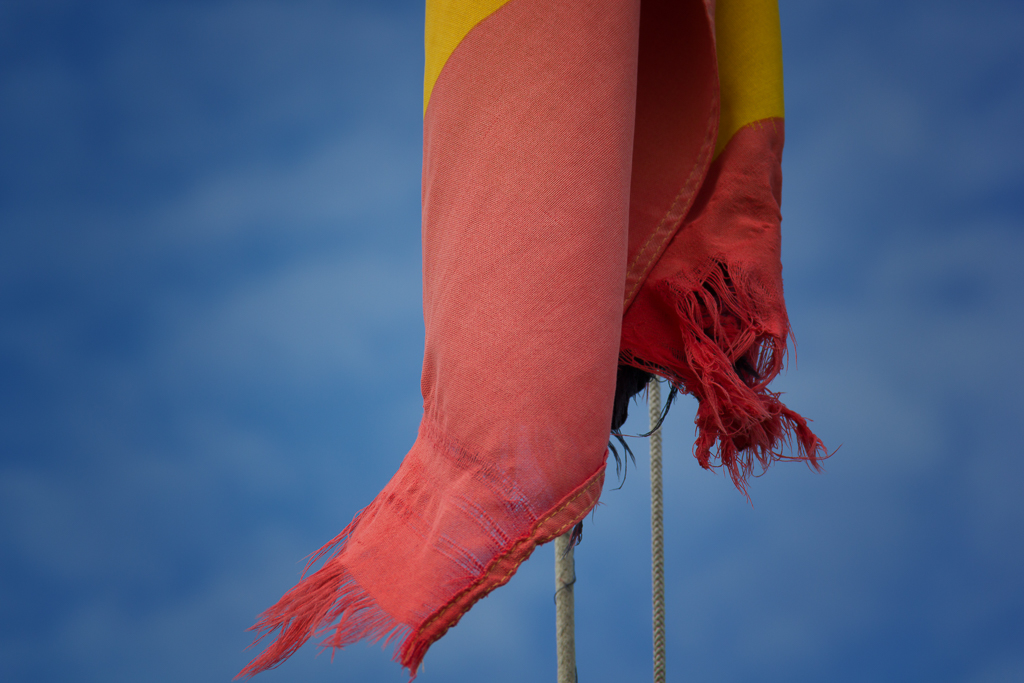 I left the lighthouse area and as I did so, the super-sized hiking group appeared. This confirmed what I’d already thought. They weren’t doing a double and I’d be spending another night with them. After a short conversation, they told me they were thinking of quitting the hike altogether. It seemed a bit early, as their intentions the day before were to do the entire hike.

Oh well, I moved onto the camp, which is nicely positioned away from the lighthouse crowds. I didn’t bother setting up near the kitchen shelter, as I knew the big group would hijack it again, which is exactly what happened. They must have skipped the lighthouse grounds, as they arrived soon after and set up their tents everywhere. Including in the middle of the access path. It was all getting a bit bizarre.

I was pleased to have the bivy away from them and when I started looking up, I began to see plenty of koalas. Their routine seems to consist of no more than eating and sleeping, which is not a bad lifestyle choice I guess. A mother with accompanying joey passenger were wandering around the trees and they were a photographic marvel, as they observed me in the glow of late afternoon sun. 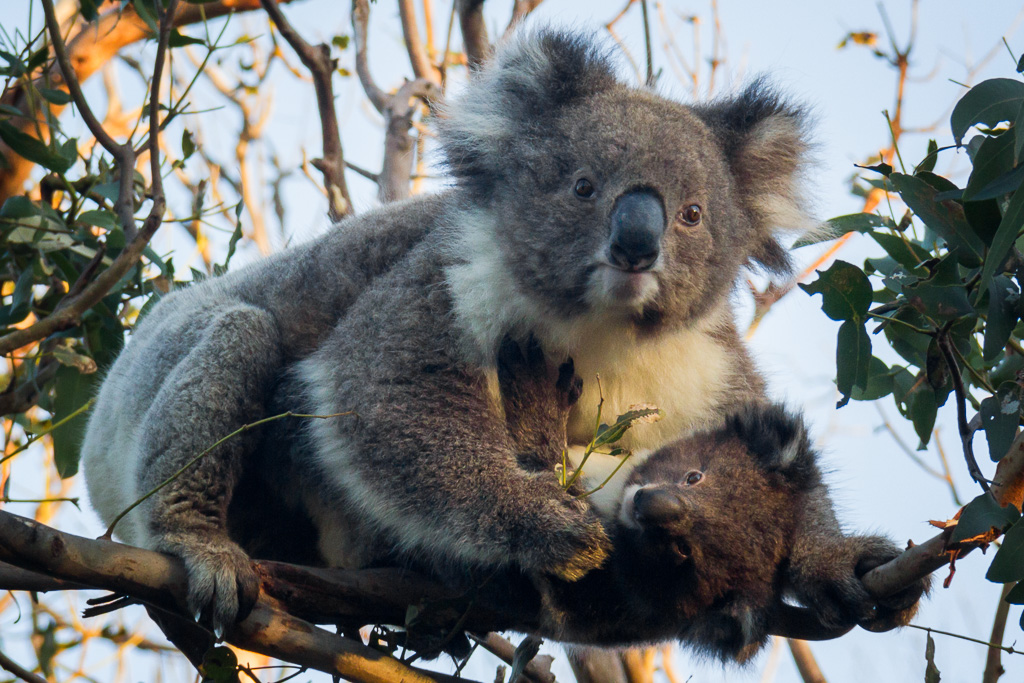 I had my wrap and waited out the rest of the day relaxing. Then it was off to bed with the iPod listening to a bit of Sigur Ros… 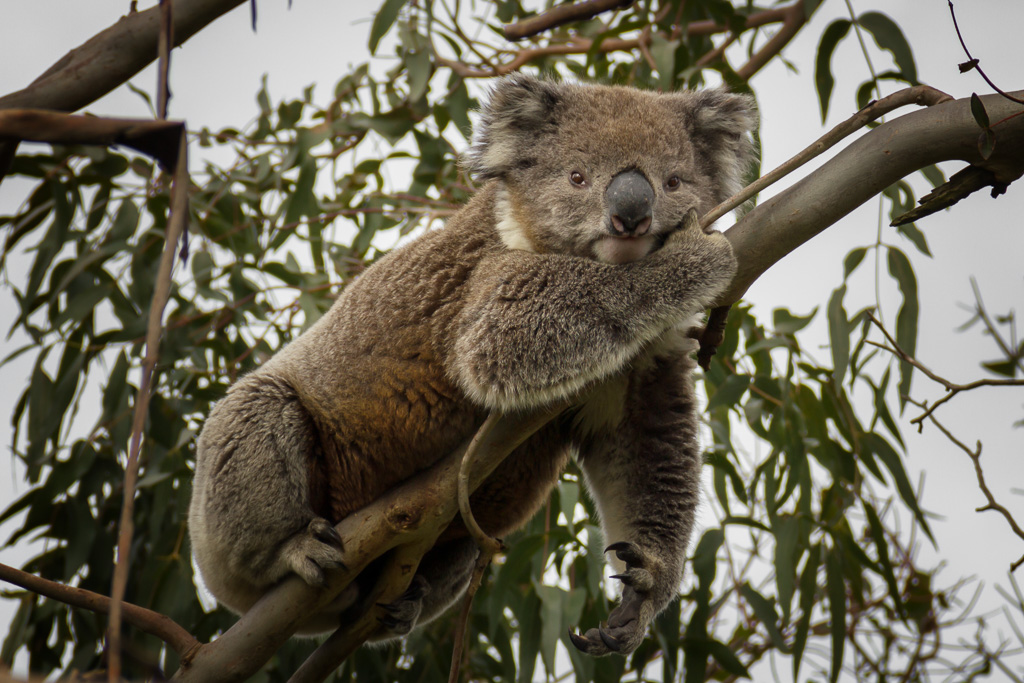