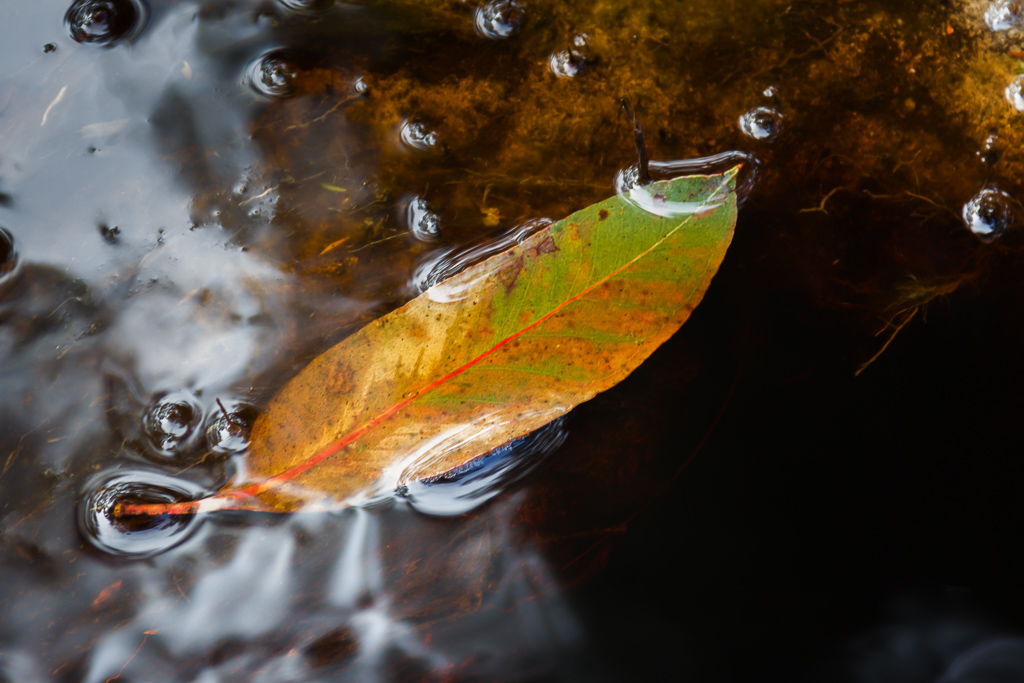 I must say, the night spent at Elliot Ridge was interesting. Firstly, I was surprised to see two, full-sized bags of rubbish left on the table in the kitchen shelter when I arrived. Hey, if you can carry your crap in, you can carry it out! That’s my vent out of the way for this minute.

I read the intentions book in the shelter and someone had written, “What’s that purring noise?” I didn’t think much of it, until I went to bed. Yes, there was a purring noise, but it sounded like Satan’s cat who was purring. Whilst on steroids. I was pretty sure it was a koala, as it’s amazing how much a small animal can sound so demonic. I was 99.9% sure anyway, but 0.1% of me thought it was a blood crazed Yowie, who was going to descend on me in the middle of the night and pop my head off to use as a kebab. 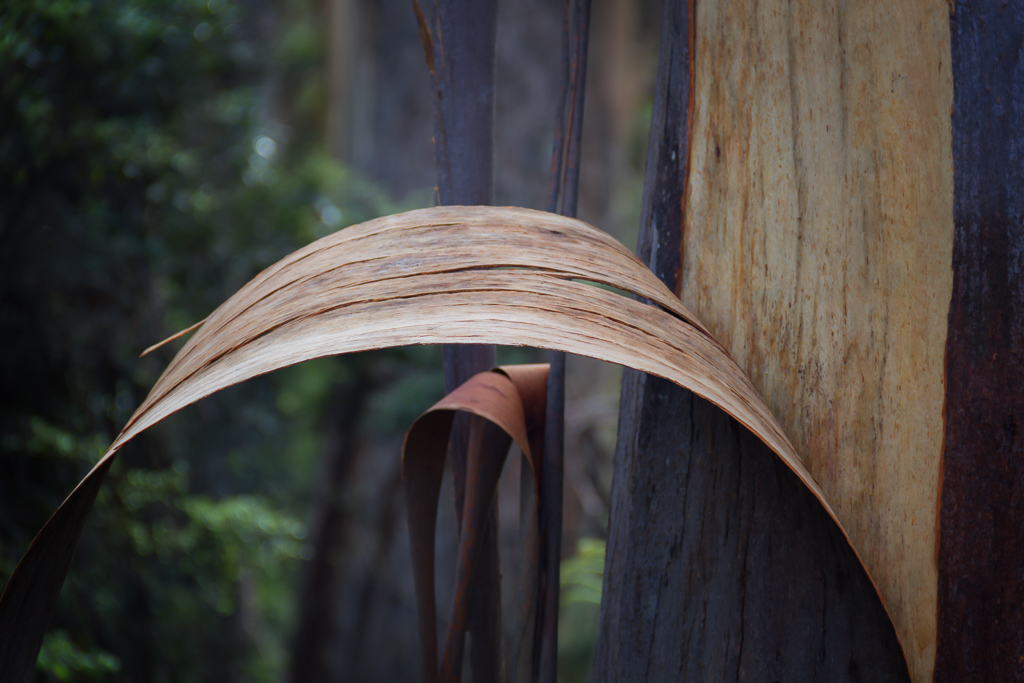 It was a restless sleep for another reason also. When I woke up in the middle of the night to the demon sound, I suddenly realised my spine felt like Mike Tyson had used it in his warm up routine.

Wondering why my spine was so wrecked, I put my hands out and felt beneath my sleeping bag. Yep, the lovely Exped sleeping mat was completely flat. It was as if I was lying on a piece of tissue paper, and it reminded me of my army days where we’d just sleep in our bags on the ground.

I then had a sinking feeling, when I remembered I didn’t bring the nifty, Exped sleeping mat repair kit with me. Okay, day one and already there was a fiasco. There wasn’t much more I could do, other than put up with the deflation and demon for the rest of the night. In the morning though, I crawled out the bivy like a geriatric. I went for the standard porridge breakfast with a couple of lifesaving ‘Panafen Plus’ tablets. Ibuprofen 200 mg with 12.8 mg of Codeine per tablet was the pain killer of choice for my back.

I packed up and got ready for the days walk. It was going to be a short day, with about 12 km’s of inland walking through the Otway forest, until reaching the coast again at Blanket Bay. I remembered it was quite a comfortable day, as it’s all on vehicle tracks, which are wide and easy going.

As I set off, the painkillers had kicked in, giving me a nice floating feeling early on. There had been a lot of rain in the previous weeks and the tracks were soaking. Soft, with plenty of water under foot. Small streams of tannin stained water ran down the track, so I kept my eyes out for some close up leaf shots, which eventually paid off. 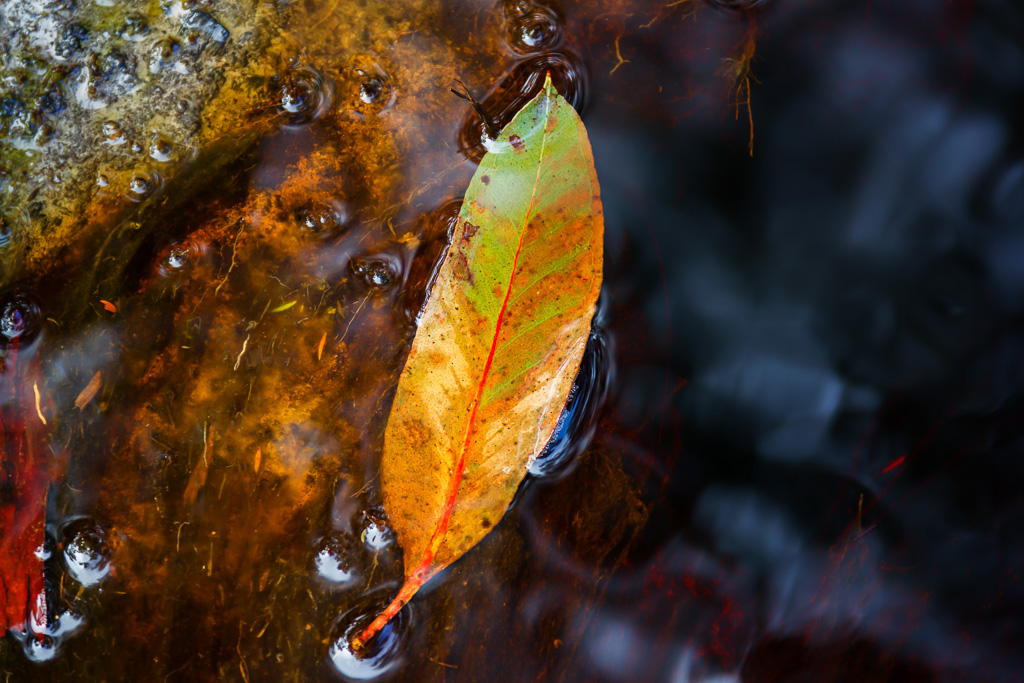 With these wet conditions, I wondered how the runner blokes were going. Before leaving, I spoke to them briefly and they were going to combine two days of walking into one, by going to Blanket Bay and then kicking on to the next camp at Cape Otway. Good luck for them, as they were planning a 20+ km day. I had a week up my sleeve, so I had no intention of going quicker than I needed to. To each their own, but I’m not a big fan of racing through a day to the next camp, as to me it sort of misses the point of bush walking. 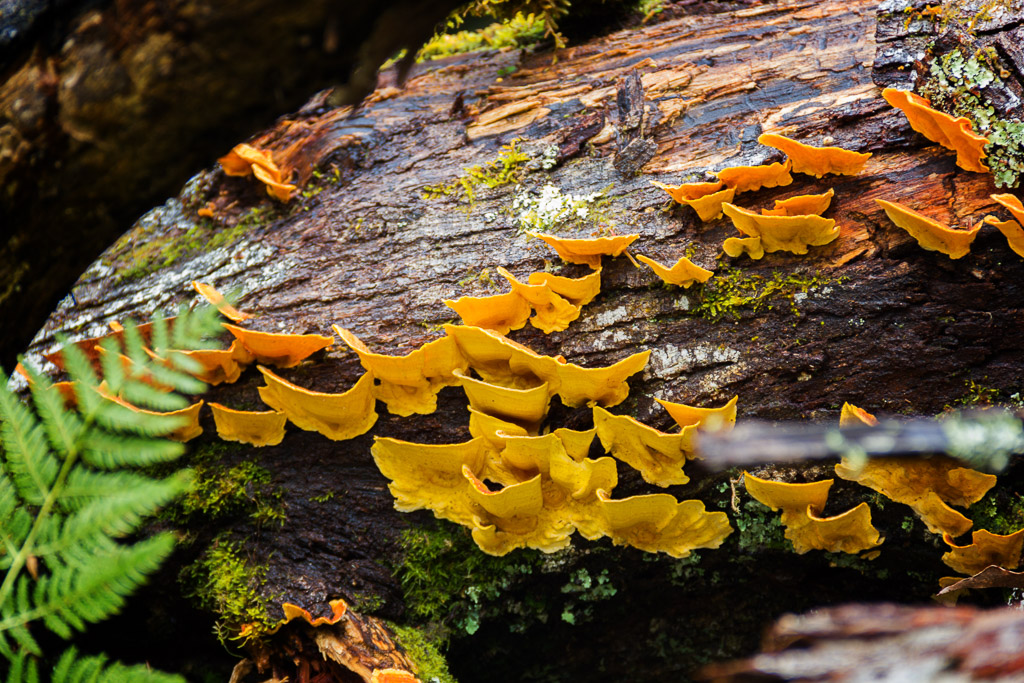 Walking was quite straight-forward but squelchy, and again, gaiters may have been handy. Not so for the runner brigade. I stopped for a rest at one stage and they came trudging up the track. They didn’t appear happy at being soaking wet. I was feeling quite comfortable in my boots, but I didn’t want to remind them of this. As they continued on, it would be the last I saw of them, as they were moving quite quickly with their big day ahead.

As I slogged on, I did have a mild amount of panic, as I went for my sunglasses and suddenly realised I didn’t have them. I’d stopped in the previous 500 metres and taken my pack off, so I assumed they’d fallen off there.

I set a cracking pace back and after a bit of fossicking around, found them near the area I’d stopped at, sitting on the ground. I breathed a sigh of relief, as I’m the sort of person who can’t operate outside unless I have my sunglasses on. The retrieving had put a bit more distance in the day, but I still made it to Blanket Bay early in the afternoon. On the way down to the beach, I passed some old ruins.

Arriving at camp, there was no one in the hikers section, so I made myself comfortable. There’s a small waterfall at the back of the camp, so I set up the tripod for a few pictures. A Neutral Density filter would have come in handy for longer shutter speeds though. Maybe next time. 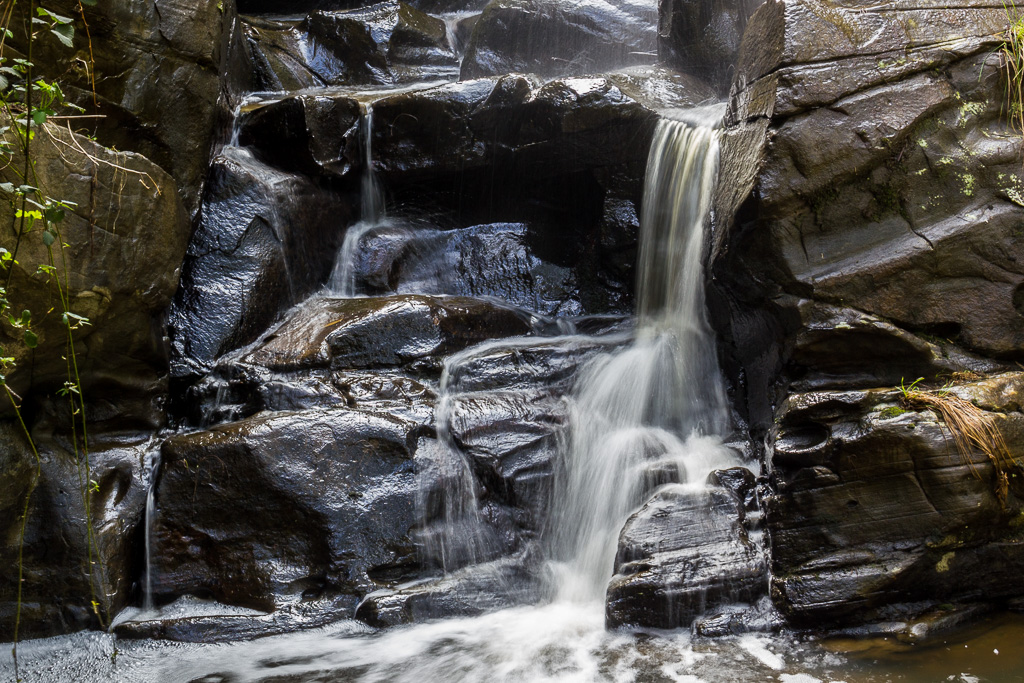 It was still only early afternoon, but I wasn’t bored, as I spent some time lying around, whilst also trying to take photos of Superb Blue-Wrens. This was pretty frustrating though, as they’re so fast. I actually ended up with a few photos of ground only, as the bird had moved before the picture was taken. I did get a couple though. 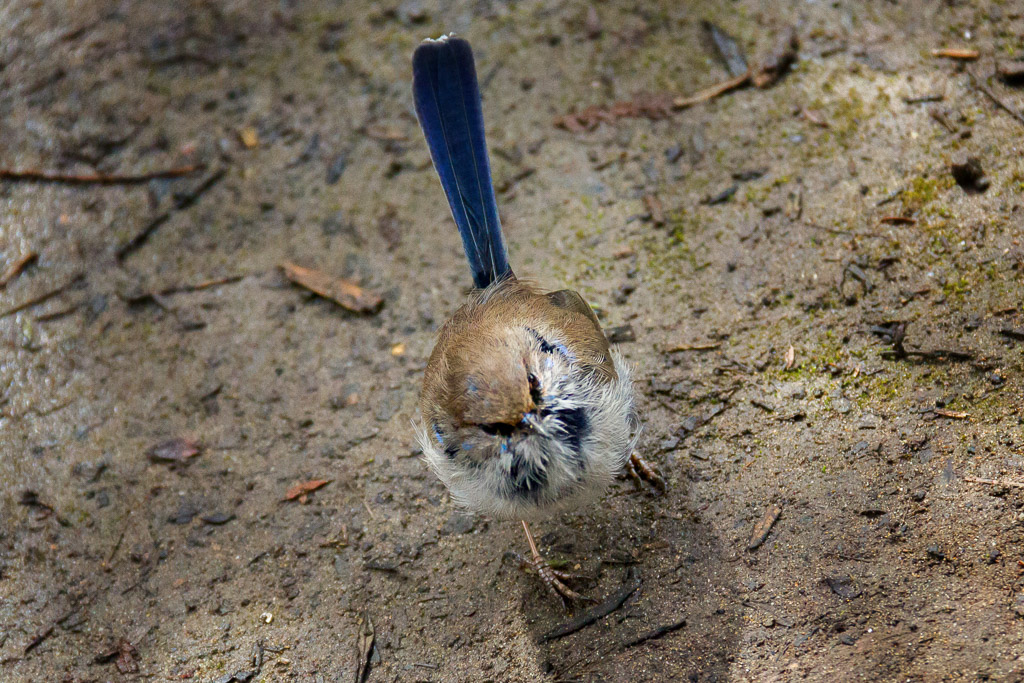 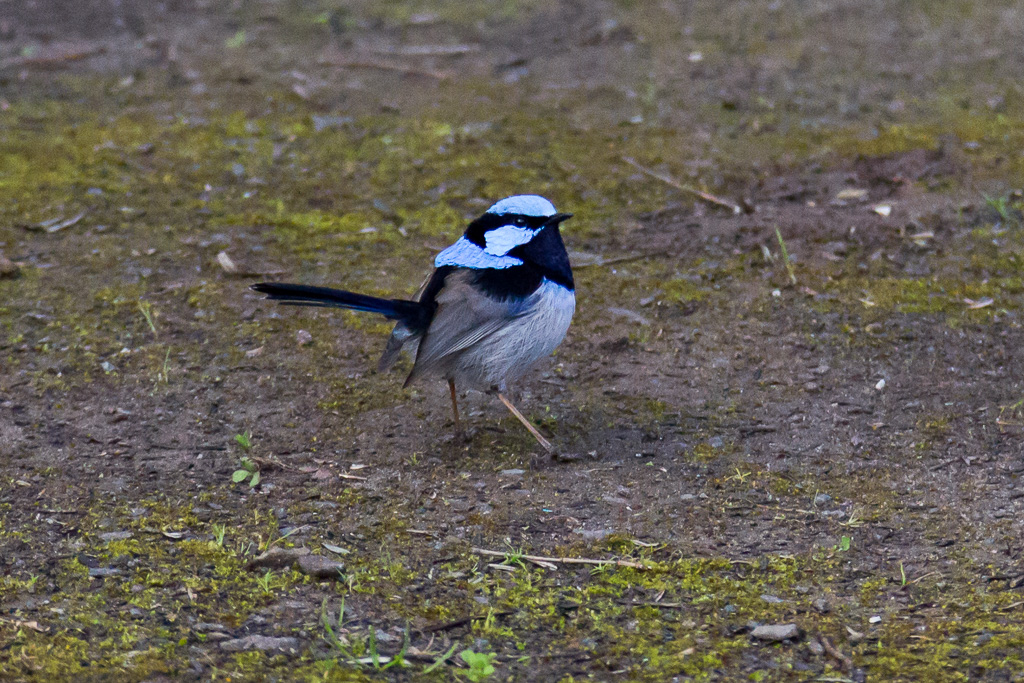 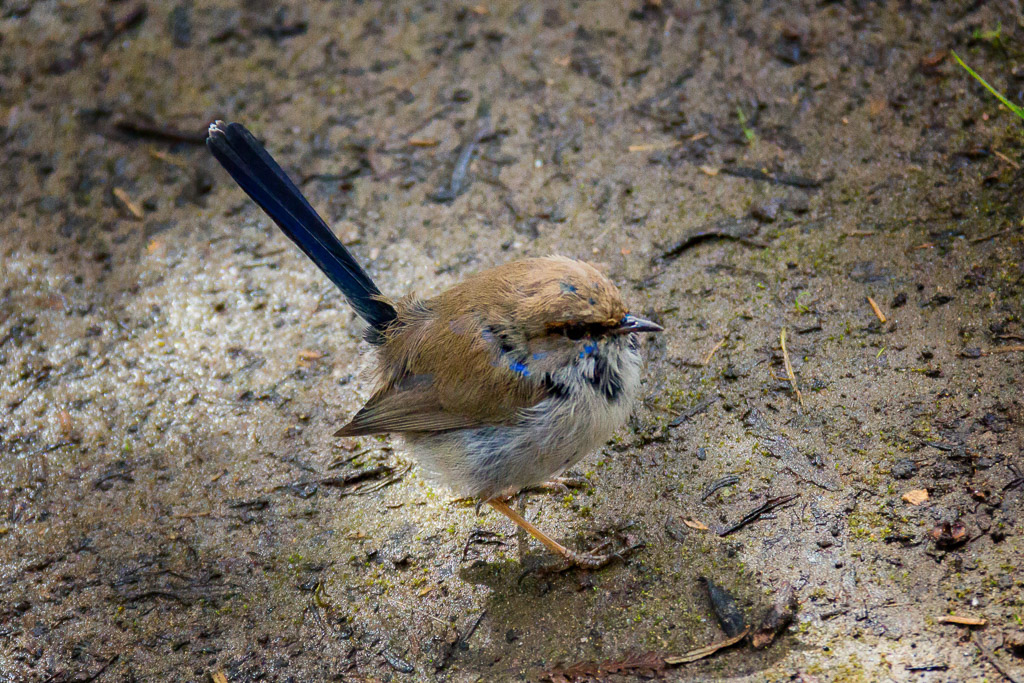 Spent from the crazed bird watching, I lay back and began to slip into a coma, before suddenly voices began to approach me. Yep, a group of at least 15 people arrived. In size alone, it meant they took over the place. The group camping area was near the kitchen shelter, so they began to set themselves up in it. I was happy to sit away from them and cook up in peace.

Speaking to a few, they’d set out from Apollo Bay in the morning and walked two legs of the hike at once. I probed with a few questions and they were saying they were going to walk another double the next day. Mm… They seemed pretty keen about the following day being big, but I wasn’t sure, as a couple of them were looking like they were dying.

Anyway, I had an early dinner and then pottered around a peaceful Blanket Bay during the late afternoon. The weather was calm and the tide was out. Whilst fossicking, I could see what looked like a person on the rocks in the distance. 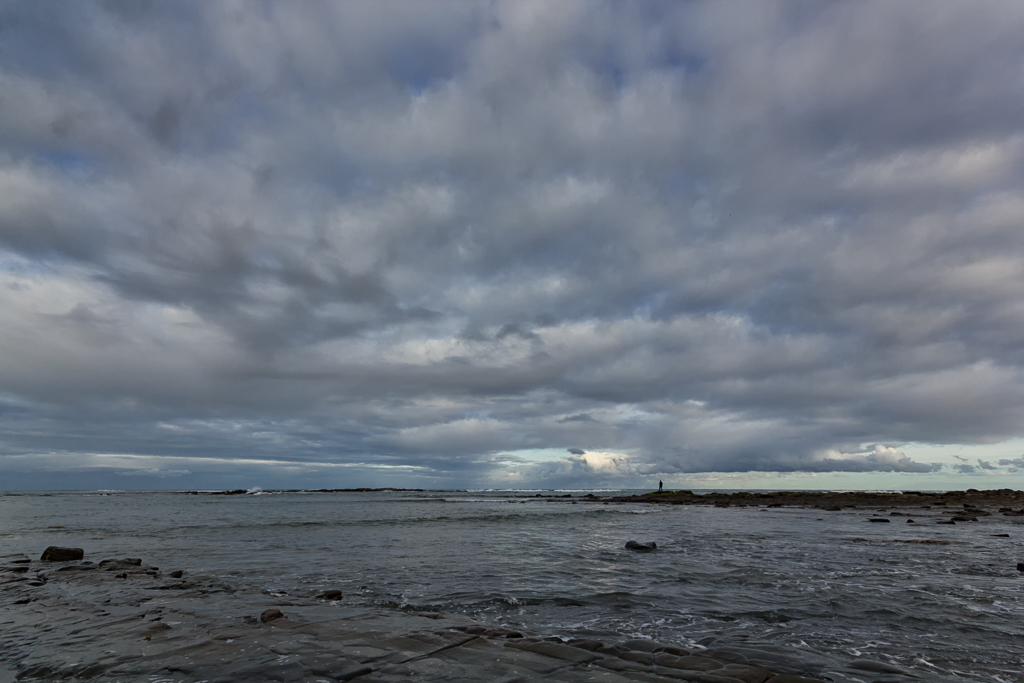 There’s something on the rock

I resorted to the zoom of my compact camera to solve the mystery. 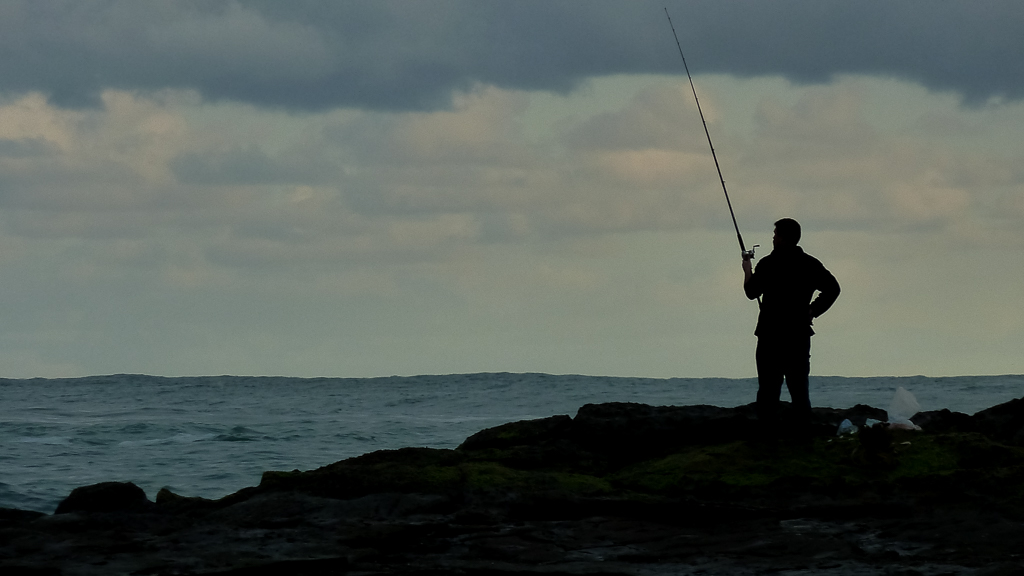 The Blanket Bay camp is shared with car campers in an area a short distance away. There were a few people in vans who were set up, so I assume the fisherman was from there. 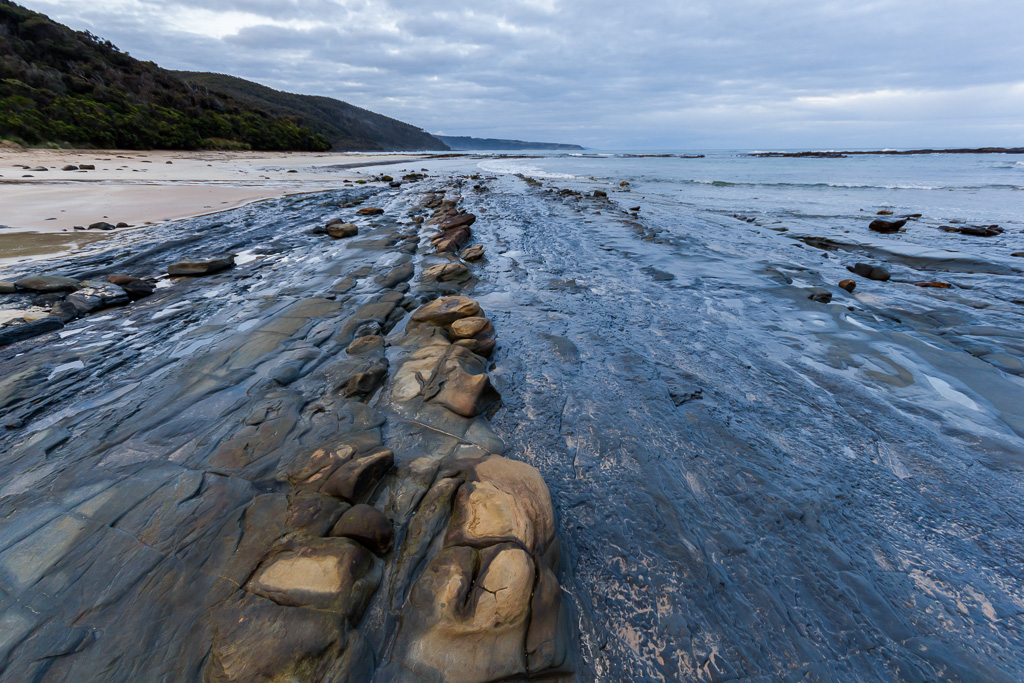 In the end, as the light faded, I decided to go to bed early and reflect on the day. Through the Otways it was a bit wet underfoot, but the walk from Elliot Ridge to Blanket Bay, Great Ocean Walk, had been a casual day out. So far the walking had been easy, but I wasn’t sure about the sleeping aspect. Luckily I had the iPod, which would take my mind off another night sleeping on the ground… 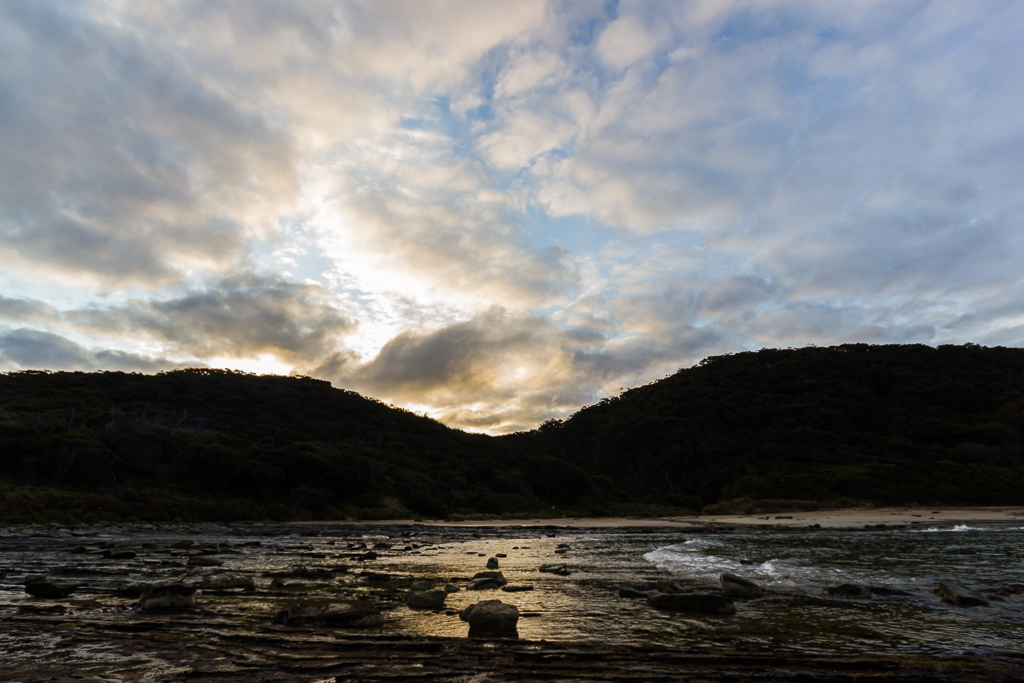