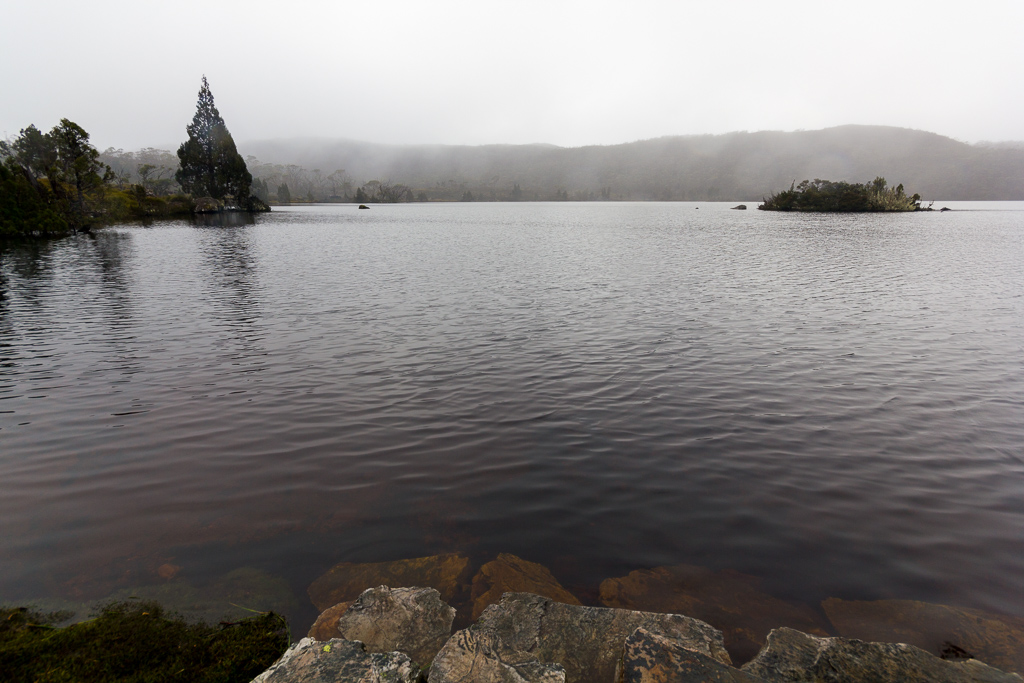 It was now day 7 of this hike from Walls of Jerusalem to Cradle Mountain and this one was going to be short, with not a lot of ground to cover. It was the penultimate day of the walk, with less than 10 km from Windermere Hut to our next camp for the night at Waterfall Valley Hut, Overland Track. The meagre distance was fine by me. I’d been living on tablets to take away constant knee pain, so I was happy for just a short stroll.

The morning was a matter of slowly packing up and heading out to face another grey day. I was hoping for a bit of blue sky just for some nice looking photos, but then I realized I was walking in Tasmania in July. Mm…that could be part of the problem.

We headed off and again that was the last time I saw Ben for the day. His turbo kicked in and he vanished off into the distance. I was left hobbling along but it gave me an opportunity to have a good look around on the way. Lake Windermere looks great and it would be a nice spot for a swim in summer. On a day like this though the chances of surviving putting the toes in were slim. It was pretty cold.

I enjoyed the hobbling stroll and passed the turn off to Lake Will. I visited it the previous year and loved it but this year, well, I couldn’t be bothered! The pain of joints was on my mind and I was happy to keep going to put my feet up.

I eventually arrived at Waterfall Valley and went to the main hut where Ben was hanging out. Another couple were there and it was a chance to have a yarn about their walking. Then another group of blokes arrived and suddenly we were met with that interesting creature who can be met whilst hiking. The Hiking Hero.

I’m sure people have met the type and conversation usually will go along these lines. Always. I usually ask something like, “How has your hike been?” This opens the floodgates of the following. “Easy! We’ve killed this hike. Three days only and people reckon this is hard?! Mud? What? It didn’t even reach my ankles. The place is like a highway. So easy!” Fair enough. Maybe.

After being force-fed, you know it doesn’t end there. Nope, it just gets ramped up. “Yeah, places like the South Coast Track. Everyone says ooohhh…the Ironbounds. That was easy as well. I don’t know why people say it’s hard because it isn’t”. Have you got the picture? If you have done something, they’ve done it better, easier and faster. Been anywhere a little bit different? Sorry, they’ve done that as well and more. The ‘hiking hero’ is the equivalent of ‘the lecturer’. This alternative will appear in another blog shortly and the end result is they’re just as annoying!

The result? Ben and I were starting to gag, so we retired to the old Waterfall Valley Hut. I actually like it better than the main hut. It isn’t heated, but it’s very cosy. The two of us in a small hut with table next to the bed area. We rugged up and had a cuppa whilst hanging out in our sleeping bags. A nice way to relax.

I was hoping to get some nice photos of Barn Bluff, which looms across the valley. Unfortunately low cloud meant we couldn’t even see it! It was time to think about calling the hike quits. One day to go. Food, cuppa and off to bed with the iPod. Listening to a bit of Neko Case was the perfect way to go to bed.. 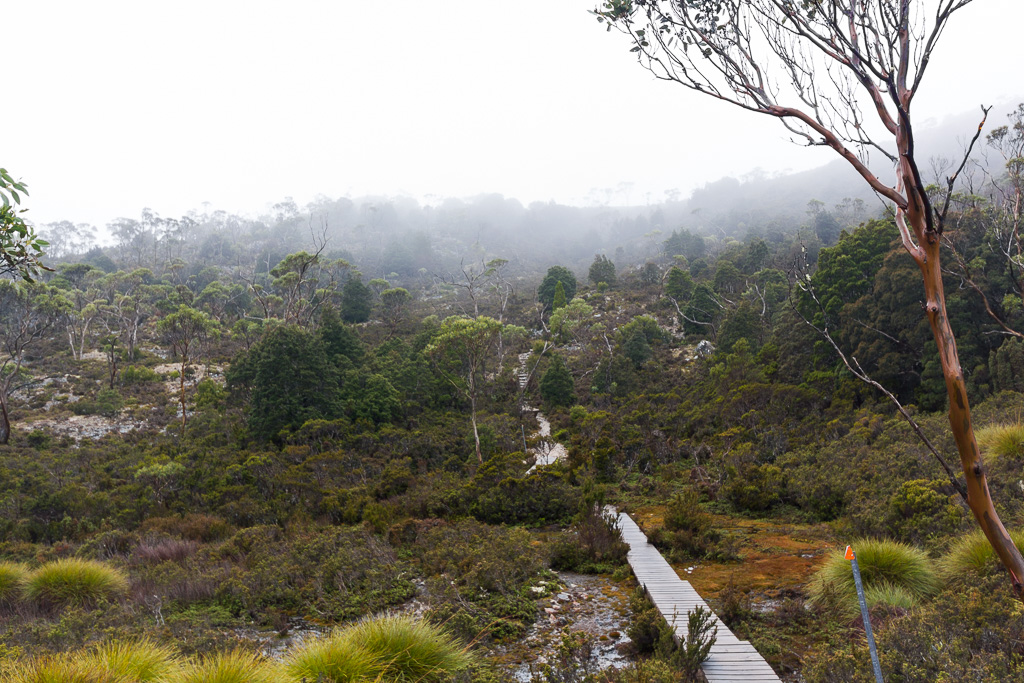