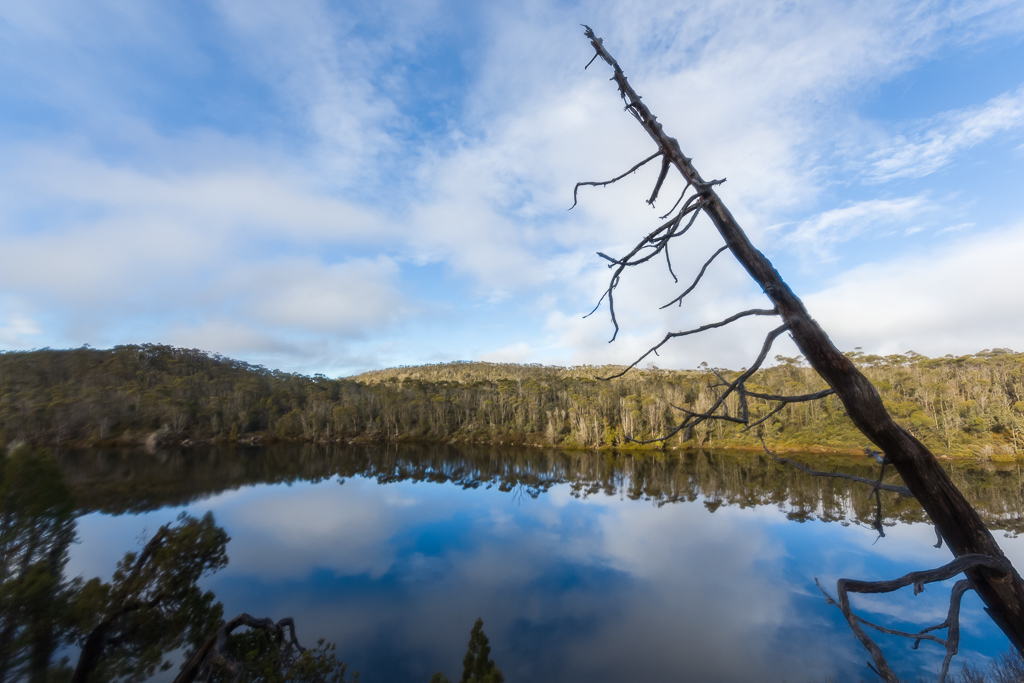 The day started out sunny and chilly, which felt perfect for hiking. Our aim was to walk from Lake Ball Hut to Lake Meston Hut via Lake Adelaide. So the theme for the morning would be ‘lake side walking’. Lakes galore before reaching Lake Meston Hut where we’d be staying the night.

We slept in and didn’t get away until about 10 am. It was kind of risky with the winter daylight, but I felt confident we could make it to Lake Meston Hut with time to spare.

I must say though, lake side walking wasn’t as easy as I thought it would be. There were plenty of rocks and tree roots, which seemed perfect for twisting an ankle. 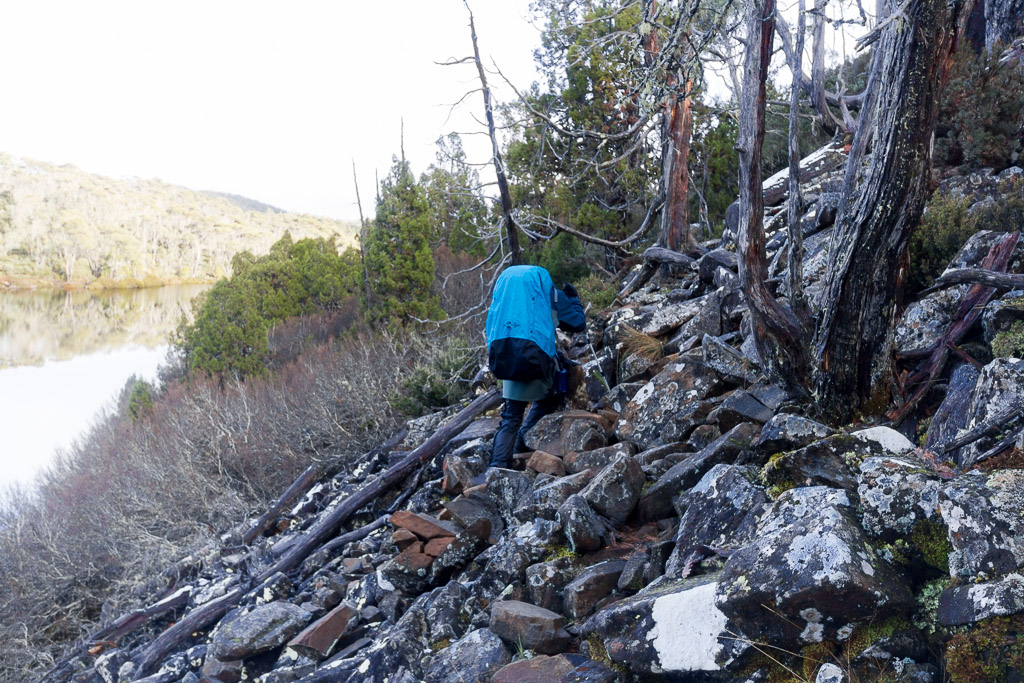 I ended up performing the first fall of the day. Somehow my feet went under me and I was left wedged between a tree. It wasn’t the most comfortable position, but at least Ben was on the ball and managed to get a photo whilst I was waiting for the pain to subside before getting up.

The pools of water on the path alongside Lake Ball which were frozen made for plenty of good pictures. We probably took too many photos as we were barely making any progress! 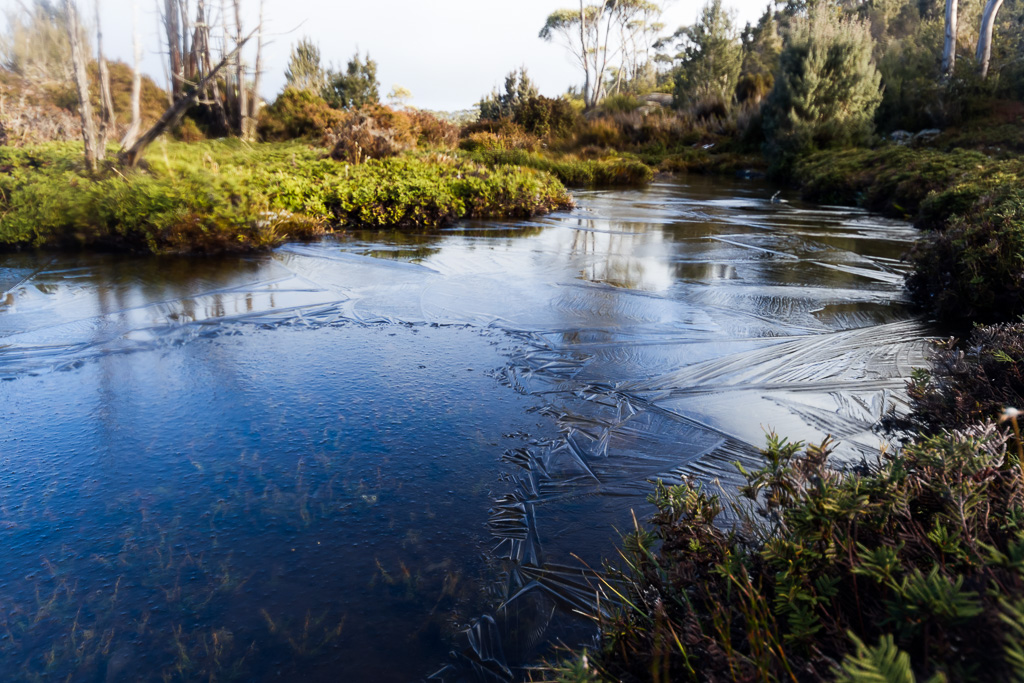 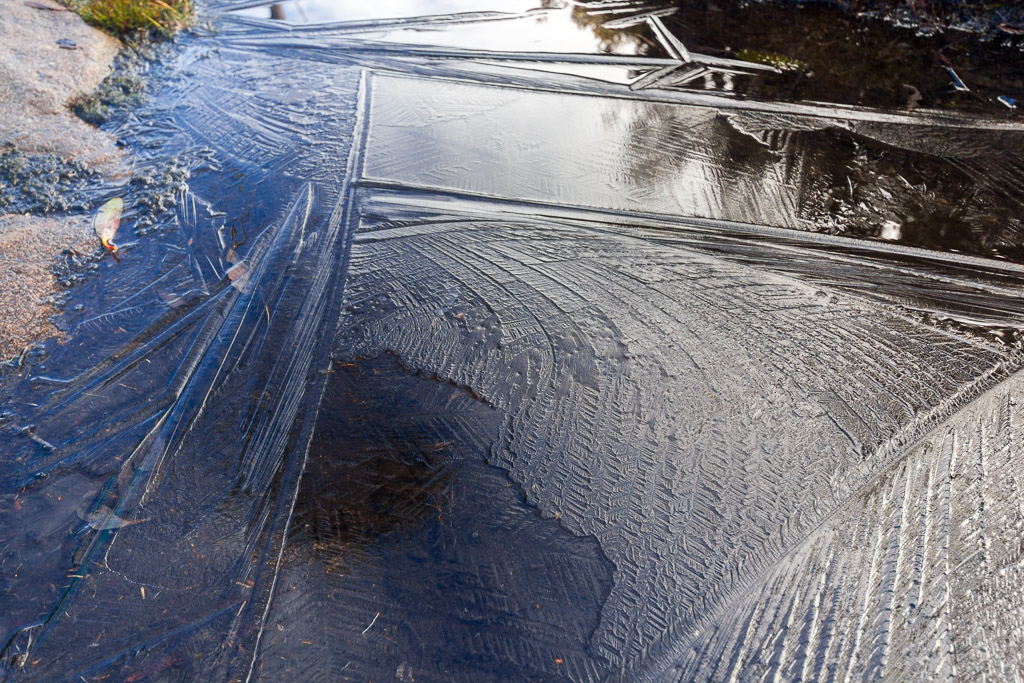 Once at the end of Lake Ball there was a steep descent to the next lake of the day, which was Lake Adelaide. It really was a perfect day with blue skies and mirror-like reflections on the water. 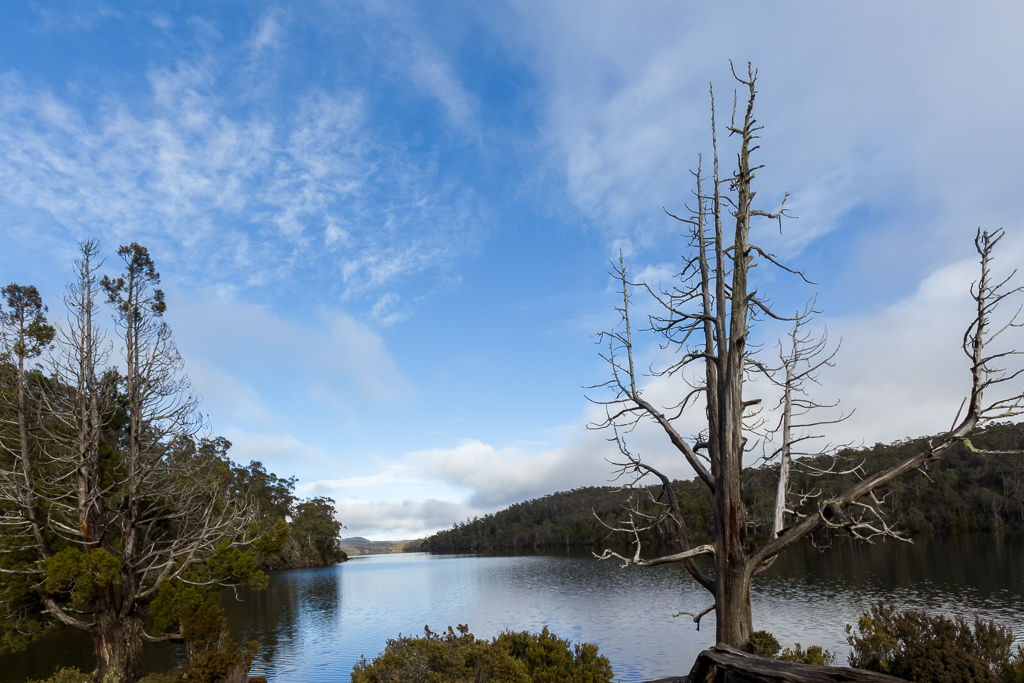 The start of Lake Adelaide

Lake Adelaide definitely was a slow going walk with plenty of wet tree roots and rocks meaning it was hard to get any rhythm going. I had an annoying moment as well with the loss of some gear.

I had a pair of gloves clipped to a ‘D’ ring on my pack and I went for the, ‘it’ll be right, it’s on the pack’ routine, which of course was ludicrous thinking. When I realised they were gone I couldn’t even remember when I last saw them attached. I considered going back to look, but I didn’t fancy struggling back over the crappy ground I’d already covered again. With the short winter day we also didn’t really have the time to be backtracking.

Oh well, I was left hoping that I wouldn’t get super freezing weather on the remainder of the hike. If someone finds them and reads this I hope they look after them as they’re good gloves! 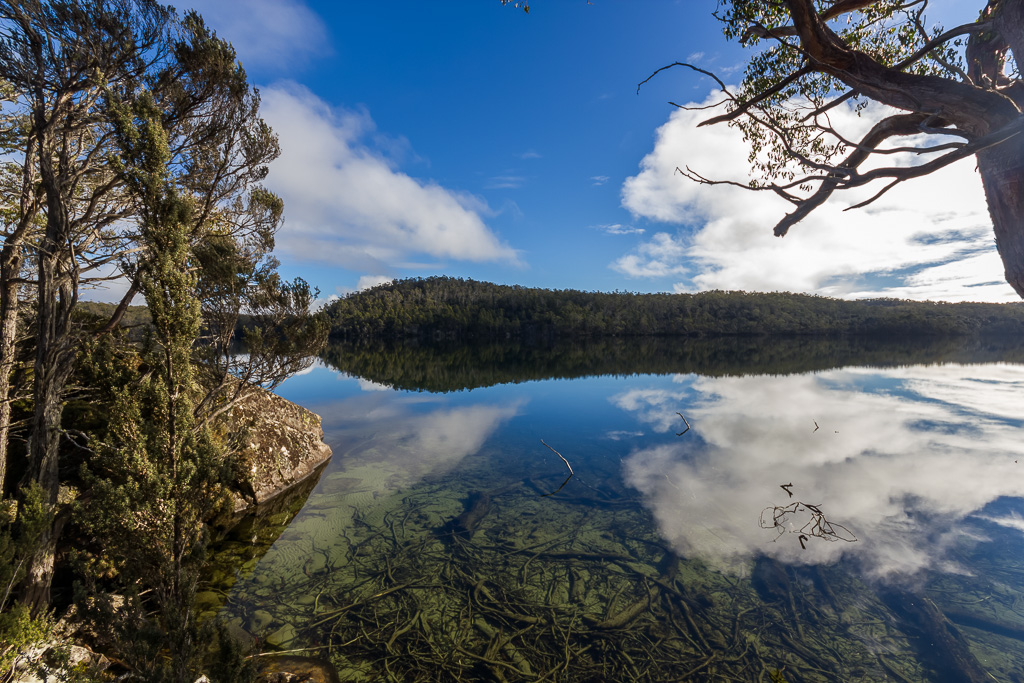 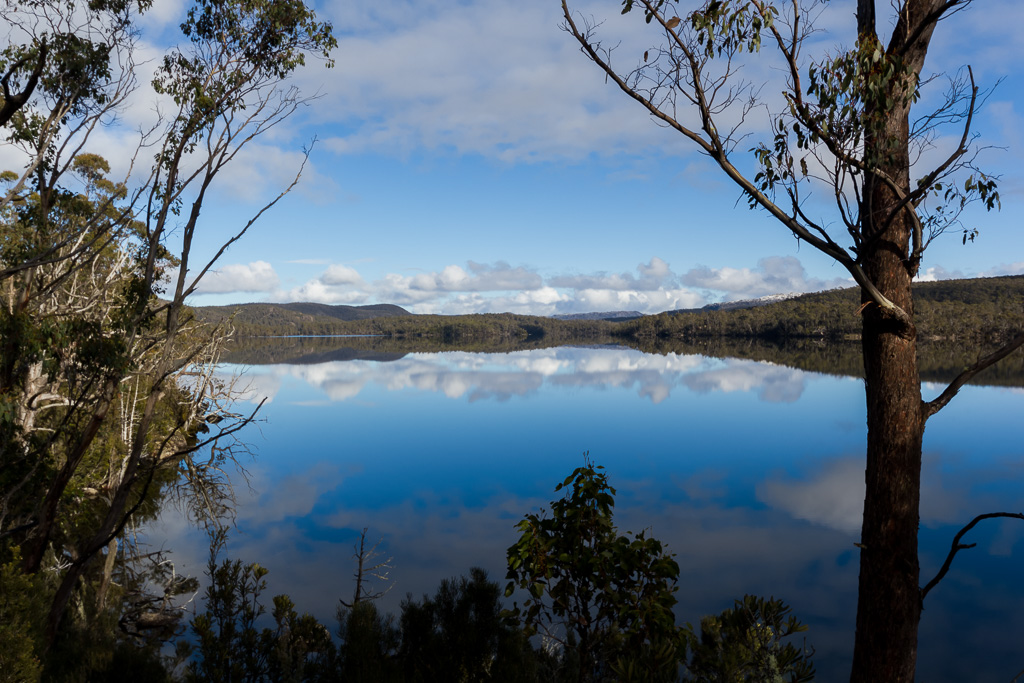 The sun kept shining, but the day was slipping away. There was one mega steep piece of rocky ground to get over and shortly after that we reached the end of the lake. There was now another untracked section to get to Lake Meston. 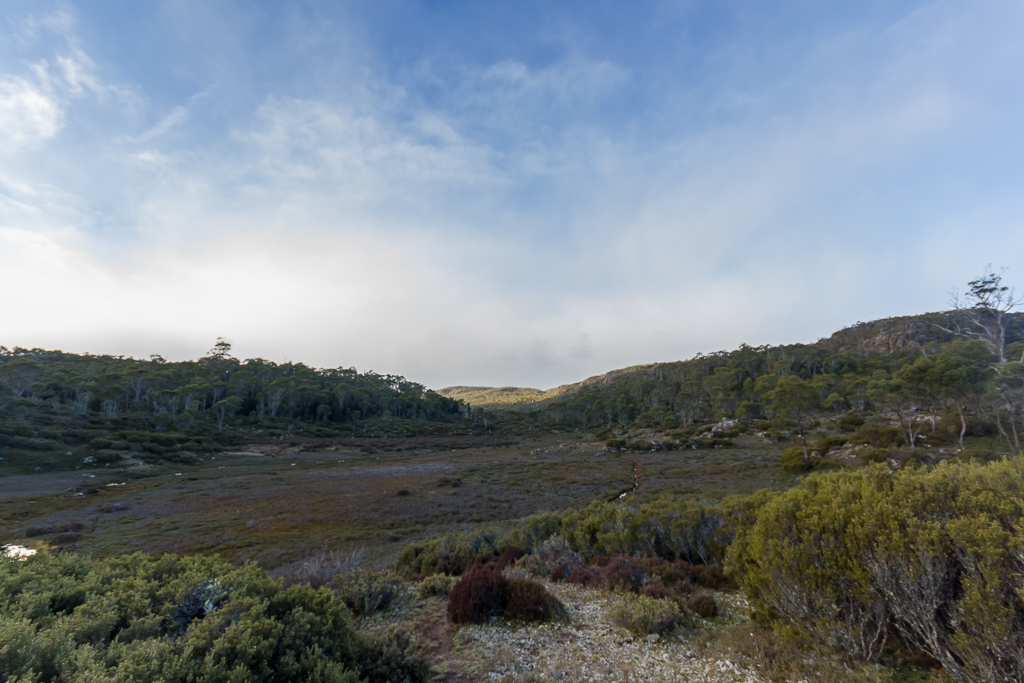 Open ground at the end of Lake Adelaide

Plenty of rain had fallen recently and this was evident through this section as water was everywhere. What appeared to be small puddles upon examination appeared to have no bottom. I would put my trekking pole in them and although using the full length, the bottom wasn’t reached. How deep are they? I didn’t want to find out as I was too scared. For all I know Harold Holt could be at the bottom of one.

With careful placement of wet feet we avoided the black holes and at one point saw a short cut and elected to tackle the section like real bushwalkers. “Yeah! Let’s go! Let’s do it! We’re men, aren’t we??” After about four steps in soft ground and faced with suspicious looking water filled holes in front of us, it became, “Reverse! Reverse! I don’t want to drown!” I guess we weren’t men after all.

A bit more diligent concentration of foot placement and we reached Lake Meston. Light was fading now and it was a matter of legging it to the hut, which was only a couple of kilometres away. A short distance like this seems to take forever when doing ‘lake side walking’. 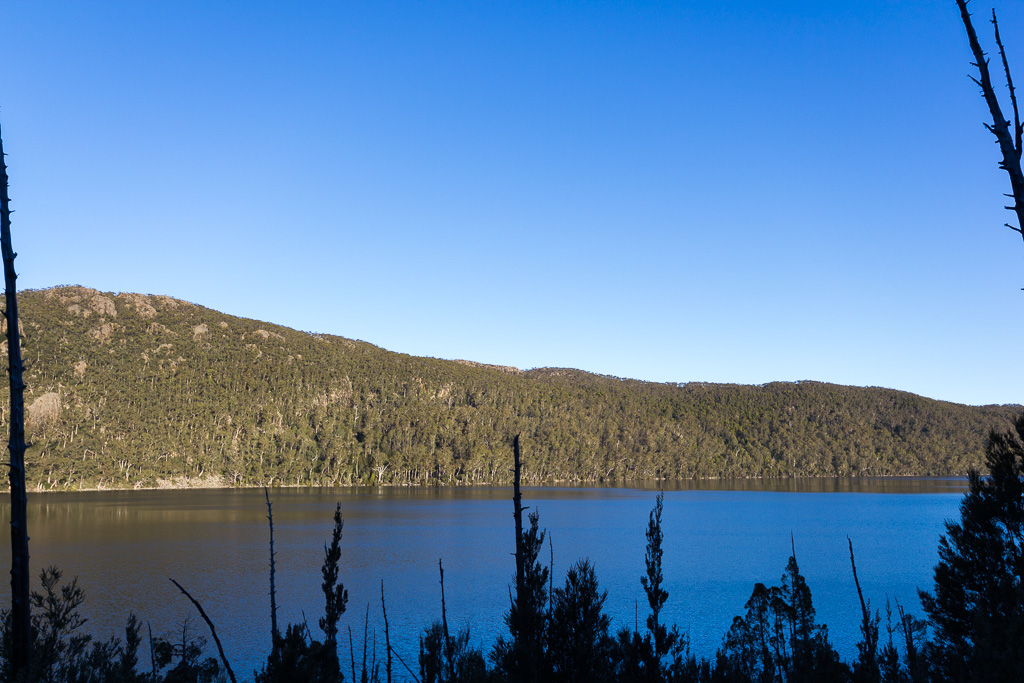 Again, it was rocks and wet tree roots and there was no way of knowing how close the hut was until we reached a clearing and there it was. A great looking building as well. Amongst the trees it’s an impressive sight and even more so is the people who built it. Thanks! 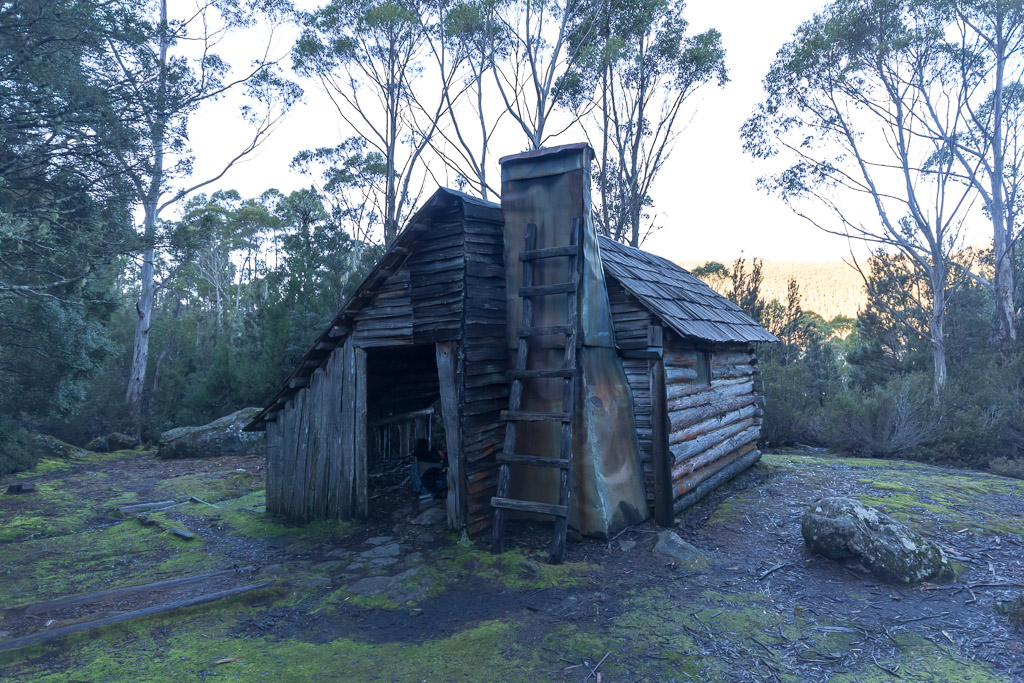 It was a short day in distance covered of 11.23 km and the total elevation climbed being 353 metres, but it was slow going along the sides of the lakes. Anyway, there was no one else at the hut, so it was a matter of setting up for the night on our own.

Talk about comfortable, this hut comes with mattresses on bunk beds and an open fire. It was so good I can imagine spending quite a few nights there. I got the fire going, but noticed we were possibly about to suffocate to death. It’s not until Ben read the intentions book that we worked out why we were dying. The chimney had a lid on it! I climbed a home made ladder against the outside of the hut and took the lid off. That certainly made a difference.

We were now able to get warm and as a bonus, breathe at the same time. With the fire blazing it was a chance to dry off the socks a little. Time to eat and then hit the kipper in a comfy bed with the iPod to relax with. A bit of ‘Aéro Dynamik’ by Kraftwerk was perfect… 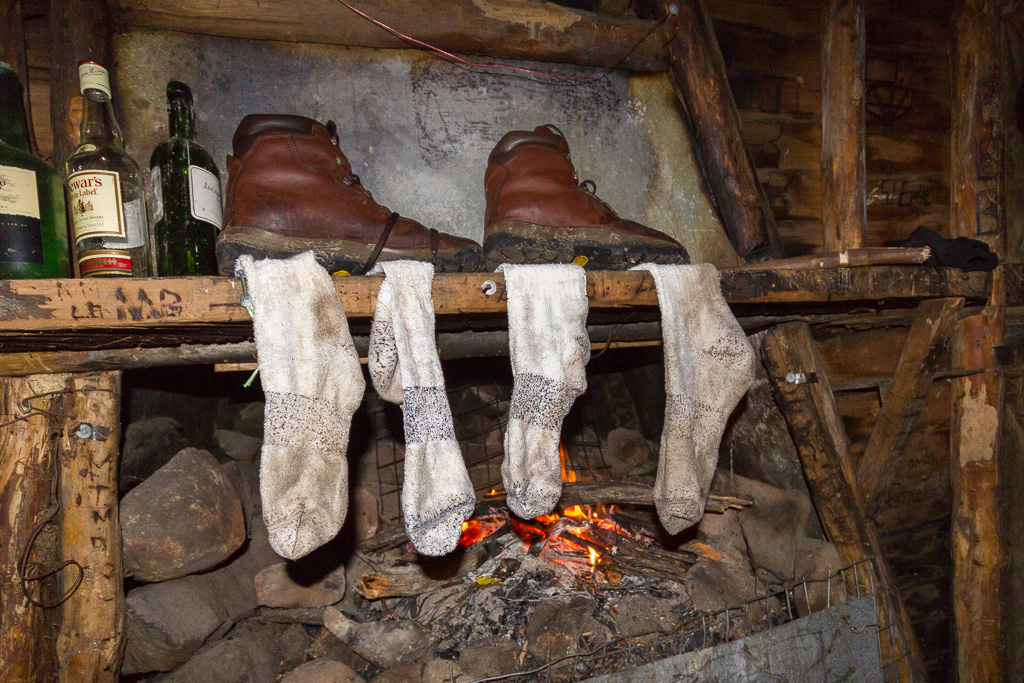